With 670hp on tap, Con Sagiaris’s black beauty Valiant is a street and strip monster

IT CAN be a kick to the nuts when someone’s street car is quicker than your race car. And even more so when their race car is heaps tougher!

Con Sagiaris is that someone; he pedals this VG Valiant hardtop as a street/strip bruiser while his race-only Dodge Dart is in the build. How does a naturally aspirated, pump-gas 670hp from a small-block Chrysler grab you? Oh, and that’s just the street car engine. 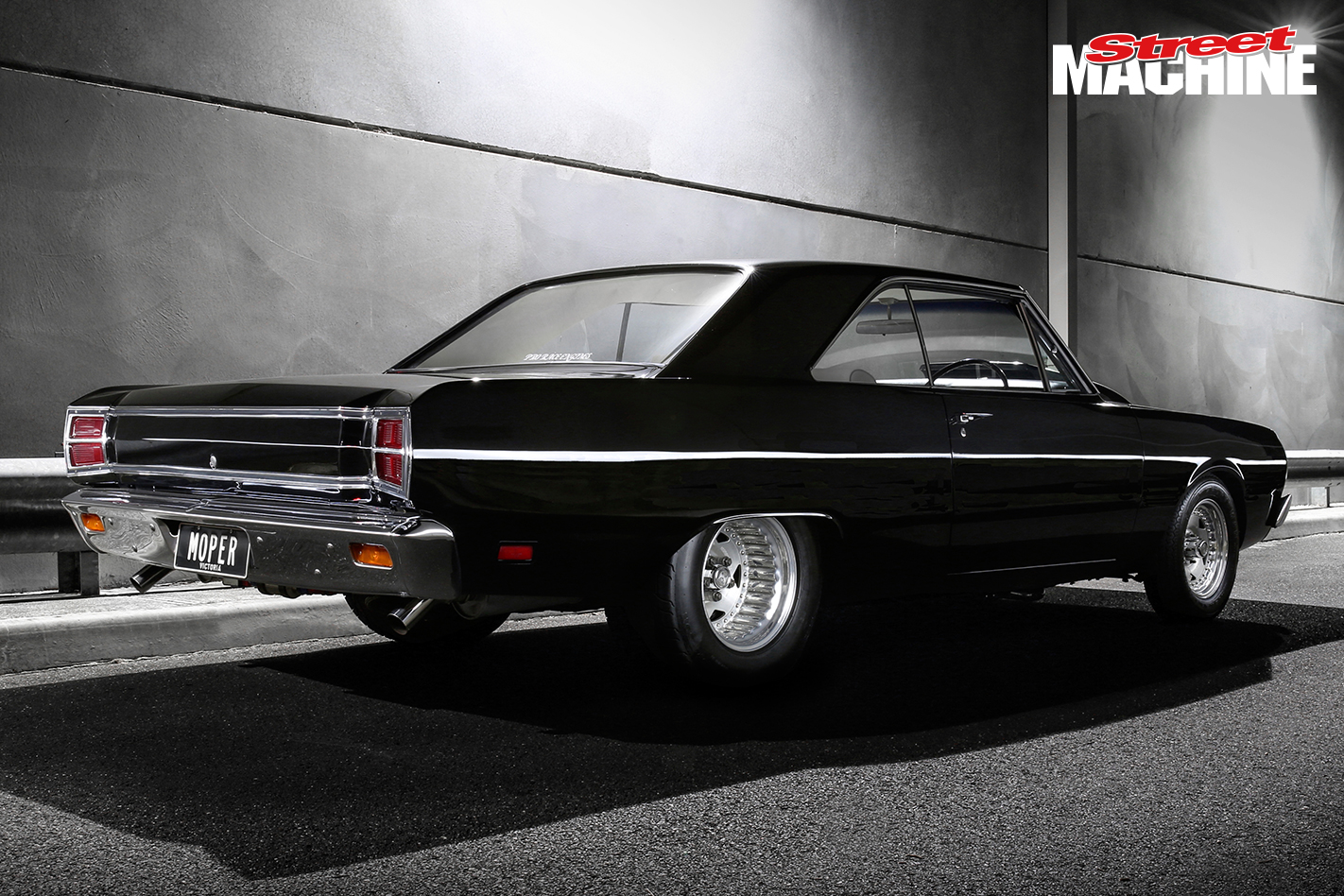 As the proprietor and chief engine builder of Pro Race Engines in Melbourne, Con can build a toughie out of any marque, but when it comes to his personal projects, it’s always been ‘Mopar or no car’.

“My first car at 14 was a ’67 Dodge Phoenix,” Con says. “I gave it a full resto and still own it today. That was followed by a VF VIP and a few other Vals, including a Track Pack Pacer and another street/strip orange VG coupe. I did venture away and build an RX-7, but it had a small-block Chrysler jammed in it. So yeah, I’ll give anything a go.” 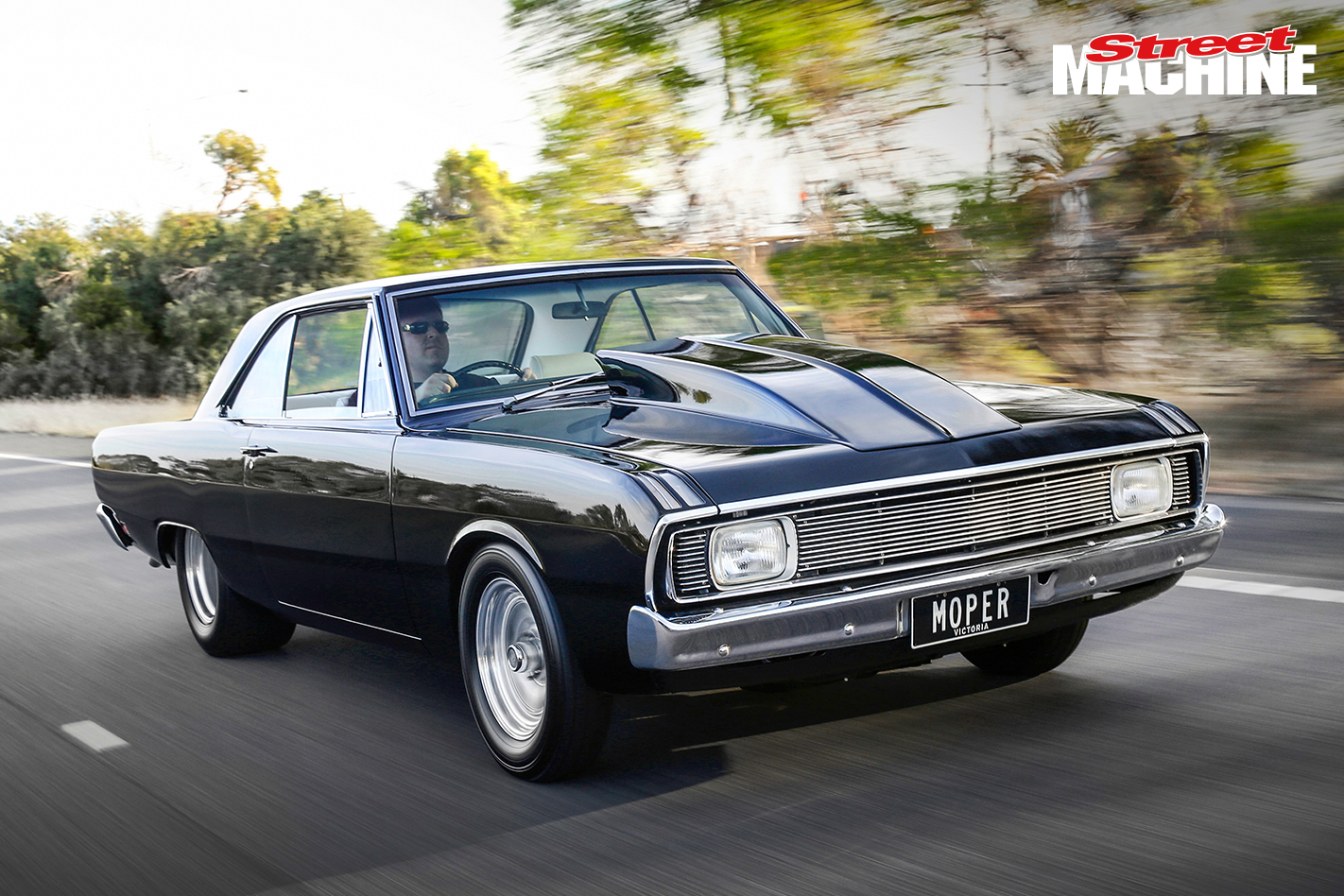 Working at Pro Race Engines, Con can build a serious unit from any marque, but for his personal projects it has always been 'Mopar or no car'

Having the skills to screw together your own killer engine combo is a great leg-up when starting a project, but it’s made easier when a dream donor car rolls your way. “I bought the VG as an unfinished project back in 2007. The body had been professionally restored and painted but needed an interior and re-assembly. It was offered to me for a price that was way too good to refuse, so next thing you know I’m building a new car,” Con laughs.

Old-school, black and two-door are the makings of a cool ride in anyone’s books, and the VG was just itching for the right kind of donk to fill that lonely engine bay.

There wouldn’t be many – if any – naturally aspirated, street-driven Aussie small-block Mopars that challenge it, but Con’s achievements result from planning, research and good old-fashioned know-how. 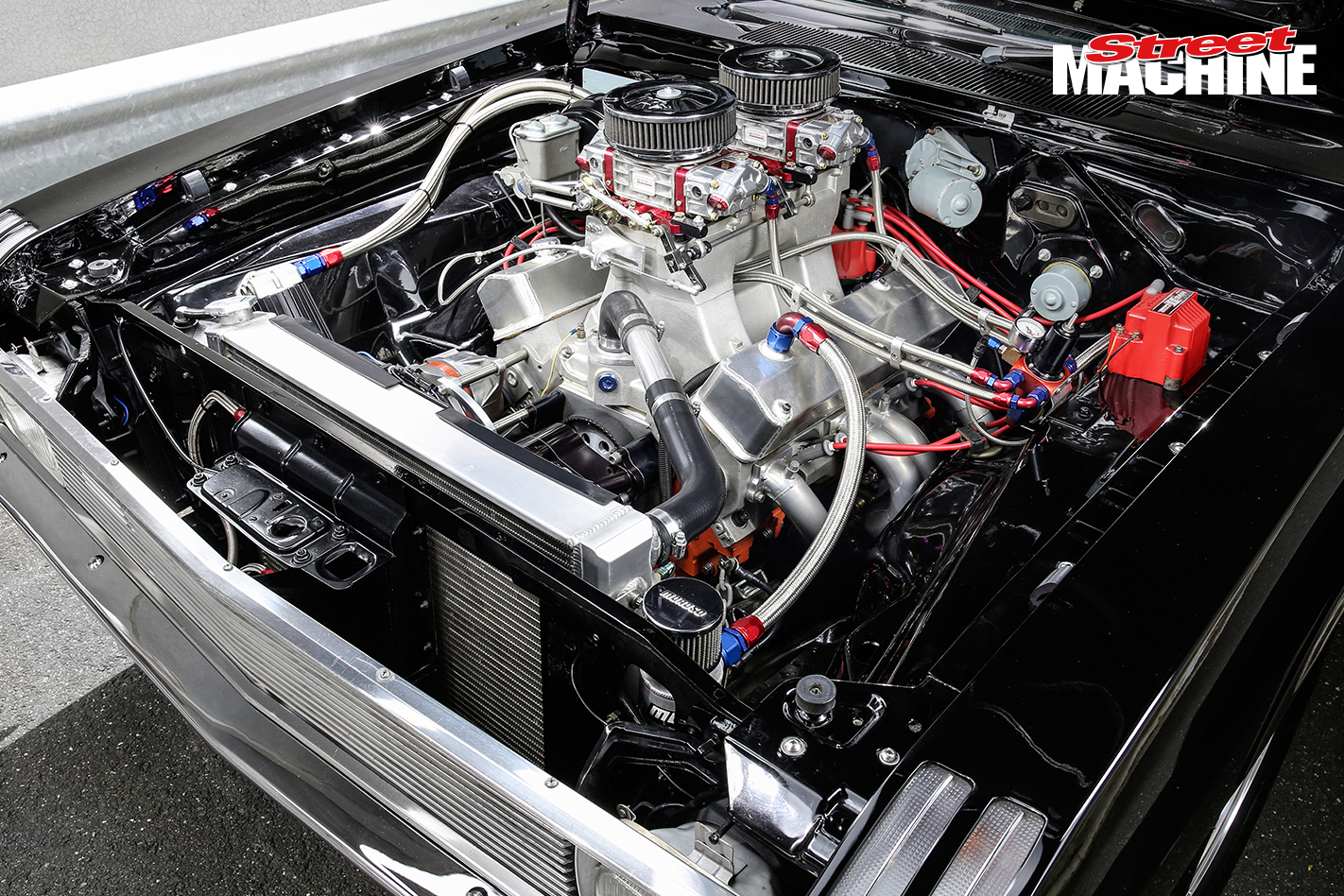 Con sourced a Mopar Performance thick-cast 318 ‘X’ block and slotted in a Mopar 3.79-inch stroker crank swinging Lunati H-beam rods. Combine this with a healthy 4.09-inch bore, and the once-tame little ’teen queen measures up at 398 cubes. Cam is a Comp solid roller of custom specs, turned by a Jesel belt drive and working in conjunction with Crane roller lifters and Trend pushrods.

Mopar Performance W5 alloy heads are a desirable choice in the Chrysler world and were purchased partially blank to accommodate Con’s preferred finish: “I moved the guides over, which allows the use of a 2.1-inch intake valve. They flow nicely too and work well with the Mopar M1 tunnel ram.” 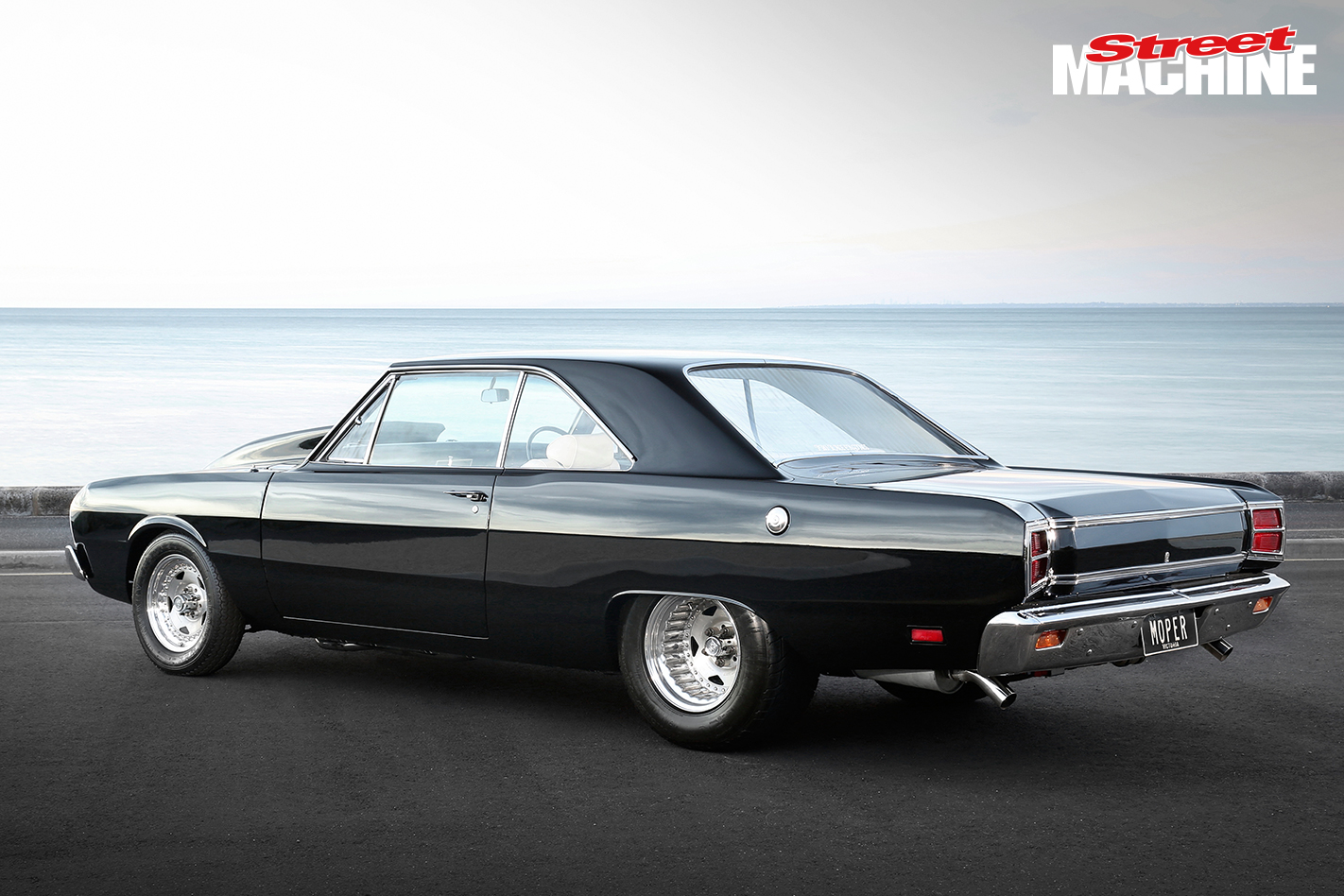 The motor is hooked up to a Powerglide with a full manual valvebody and shift kit, transbrake and 5600 TCE converter

Twin 750cfm Quick Fuel carbs were selected to finish the intake side while a set of custom 1.875-inch primary pipes were built by Con and his mate Tony from TJ Wreckers. The ignition comprises tried and proven MSD componentry including a billet distributor and 7AL module. Street temps are kept in check by a Meziere electric water pump, alloy Race radiator and twin AU Falcon thermo fans.

Con is very happy with the engine combo, which punches out the aforementioned 670hp and 564 ft-lb on pump fuel, and 699hp and a whopping 572ft-lb on avgas.

“It’s easy to drive and will happily clock up street miles, but it also has plenty of stick when needed,” Con says. “It ran a 10.49@132mph at Calder, which scored it a Fastest Street Car award for the Chrysler Nats.” 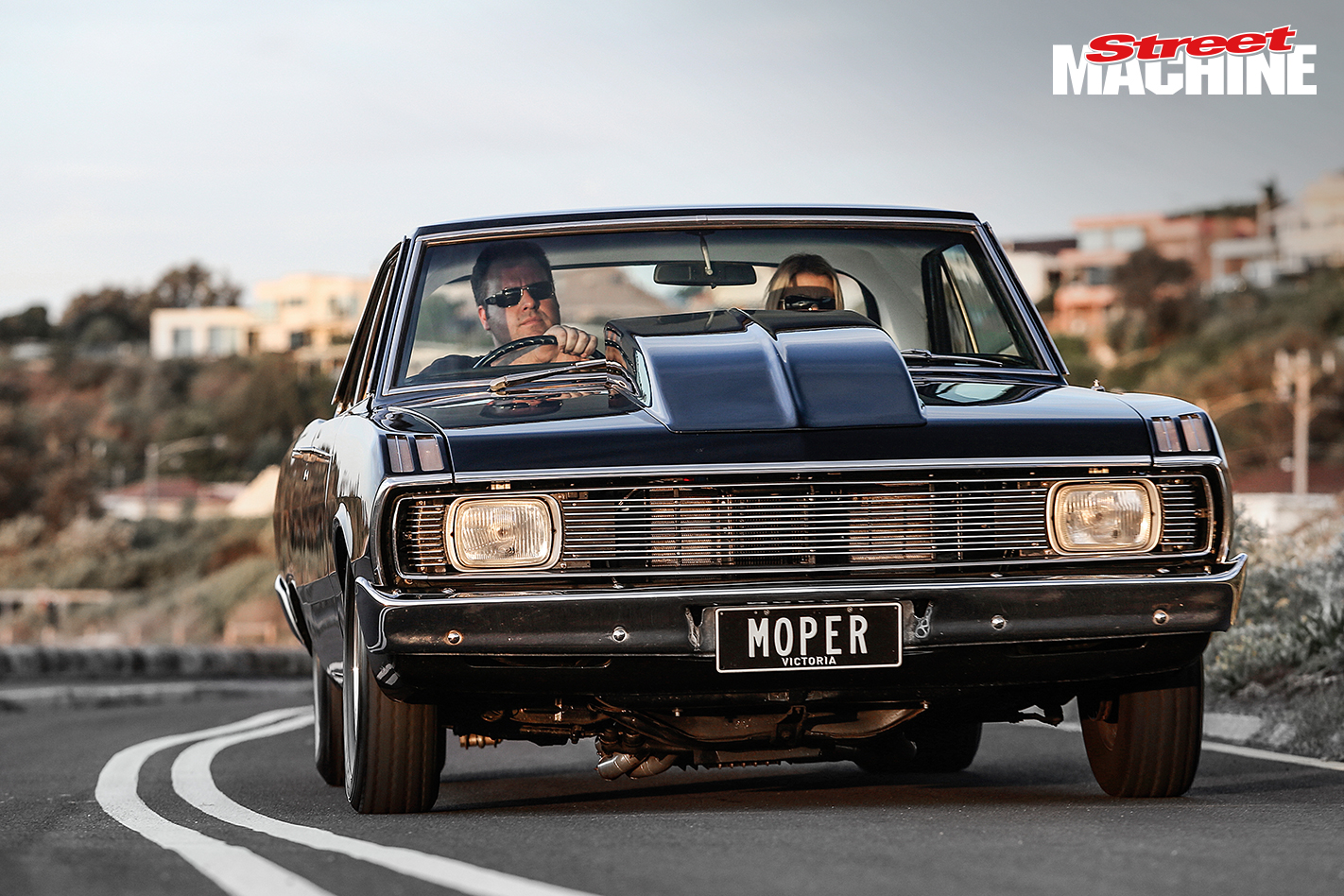 A Powerglide transmission was built by Nick Mouetsos at American Performance Imports, who installed a full manual valvebody and shift kit, while a transbrake and 5600 TCE converter come into their own when it’s time for business.

A 3½-inch tailshaft with billet ends transfers power to a nine-inch of F100 origin, filled with a Moser full-spool centre, 4.30 gears and 35-spline axles.

The factory Chrysler torsion bar front end was retained and fitted with 90/10 shocks, with Koni adjustables selected for the rear. The leaf springs were moved to the rail for more tyre clearance and to make better use of the mini-tubbed rear and chassis connectors, again crafted by Con and Tony. 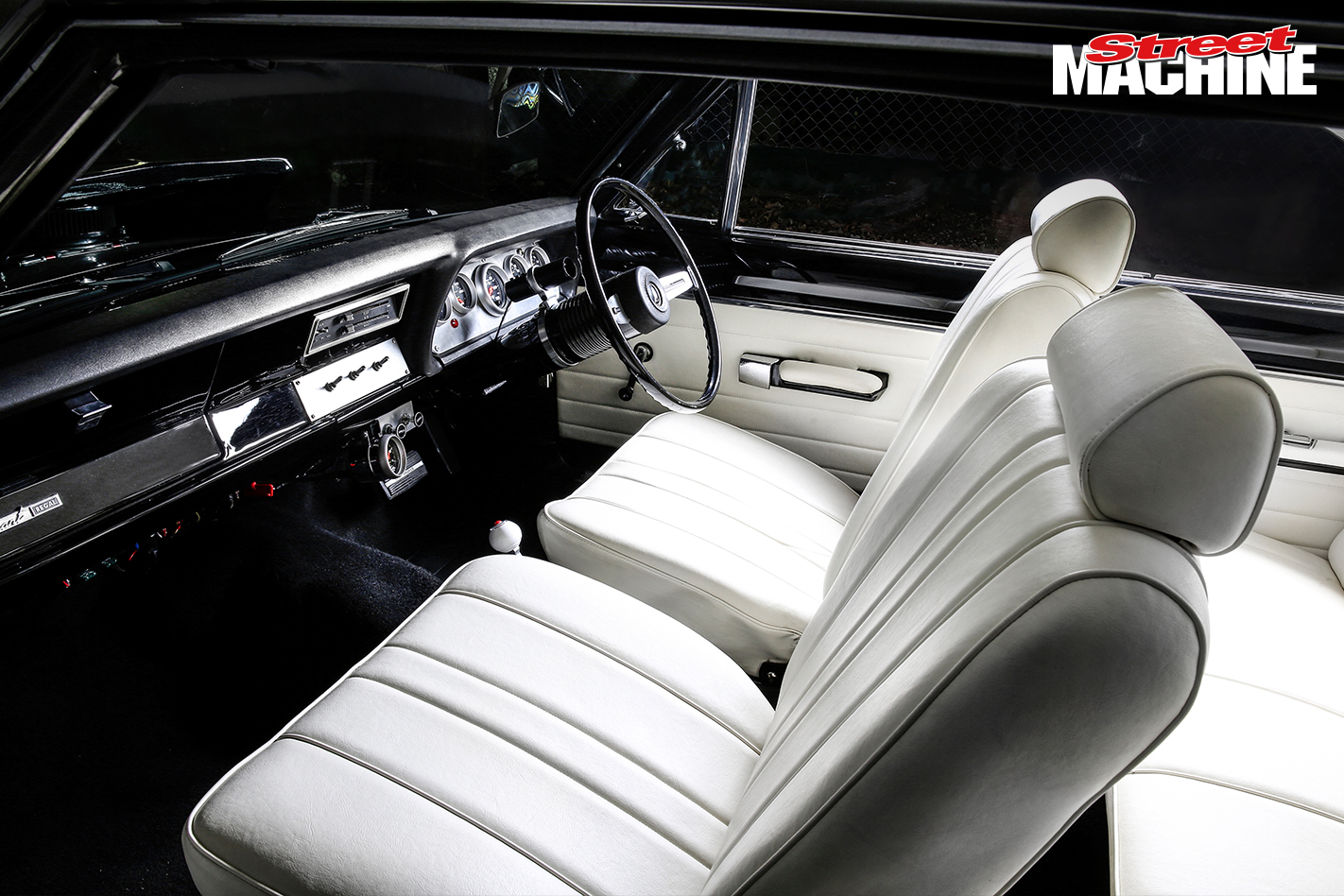 When Con got the car most of the body work had been done, but it was missing an interior. The off-white trim is the perfect contrast to the black exterior.

There’s no missing that interior against the jet black paint; Con retained the factory 770 layout but had the original buckets and rear bench retrimmed in off-white vinyl. The door cards and hoodlining copped similar treatment, with black chosen for the carpet and kick panels to better withstand foot traffic. An aluminium dash fascia is filled with Auto Meter gauges, and Con swaps cogs with a B&M Pro Ratchet shifter. 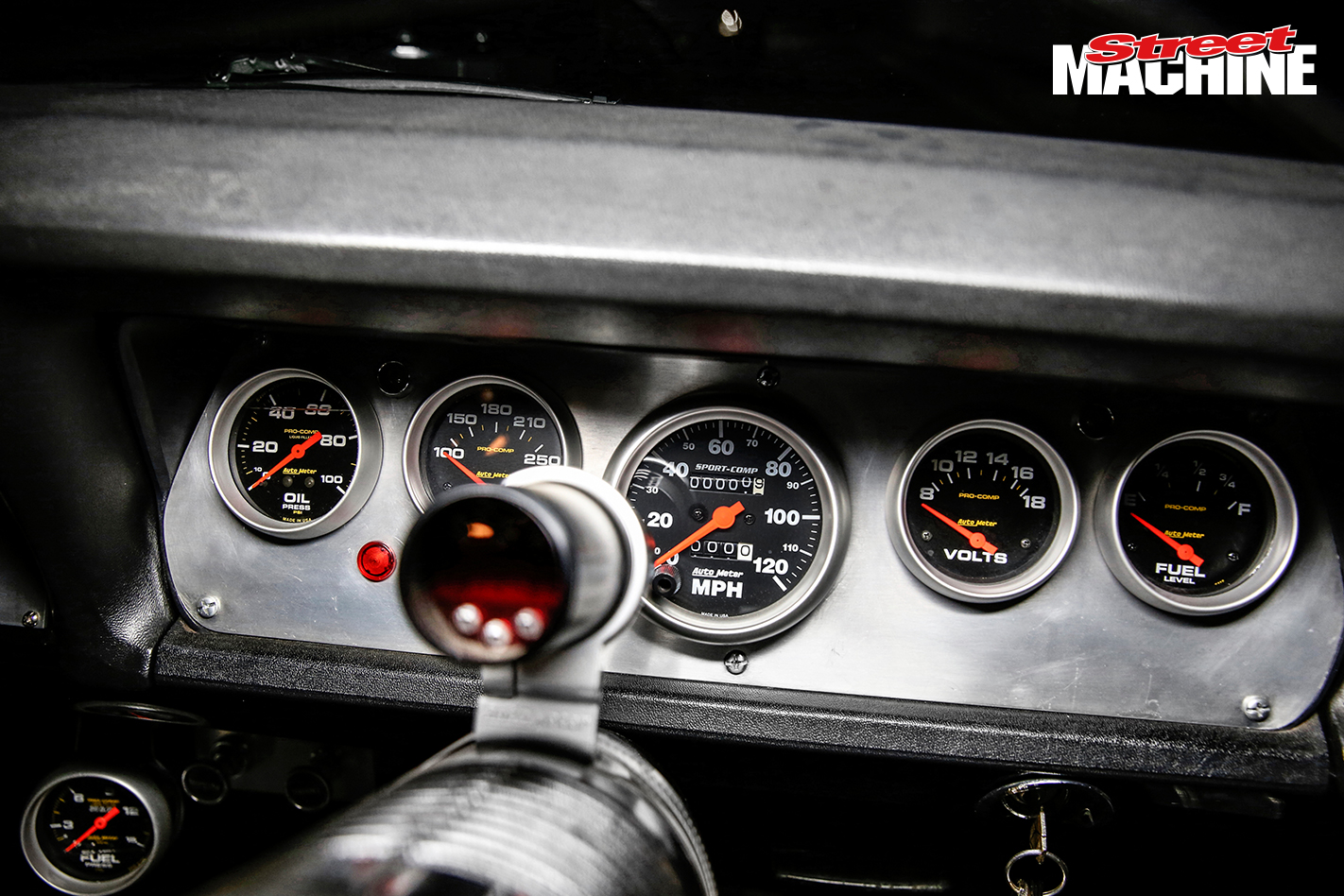 The hardtop was completed after a four-year build, and since then Con has been busy readying his latest toy, the aforementioned Dodge drag car. “I bought a ’68 Dart as a full-chassis roller out of Virginia in the US,” he says. “I’m in the throes of building a 572-cube, B1-headed big-block Mopar for it, so that should be lots of fun. I’m looking forward to getting out to the track and racing in Super Sedan.” 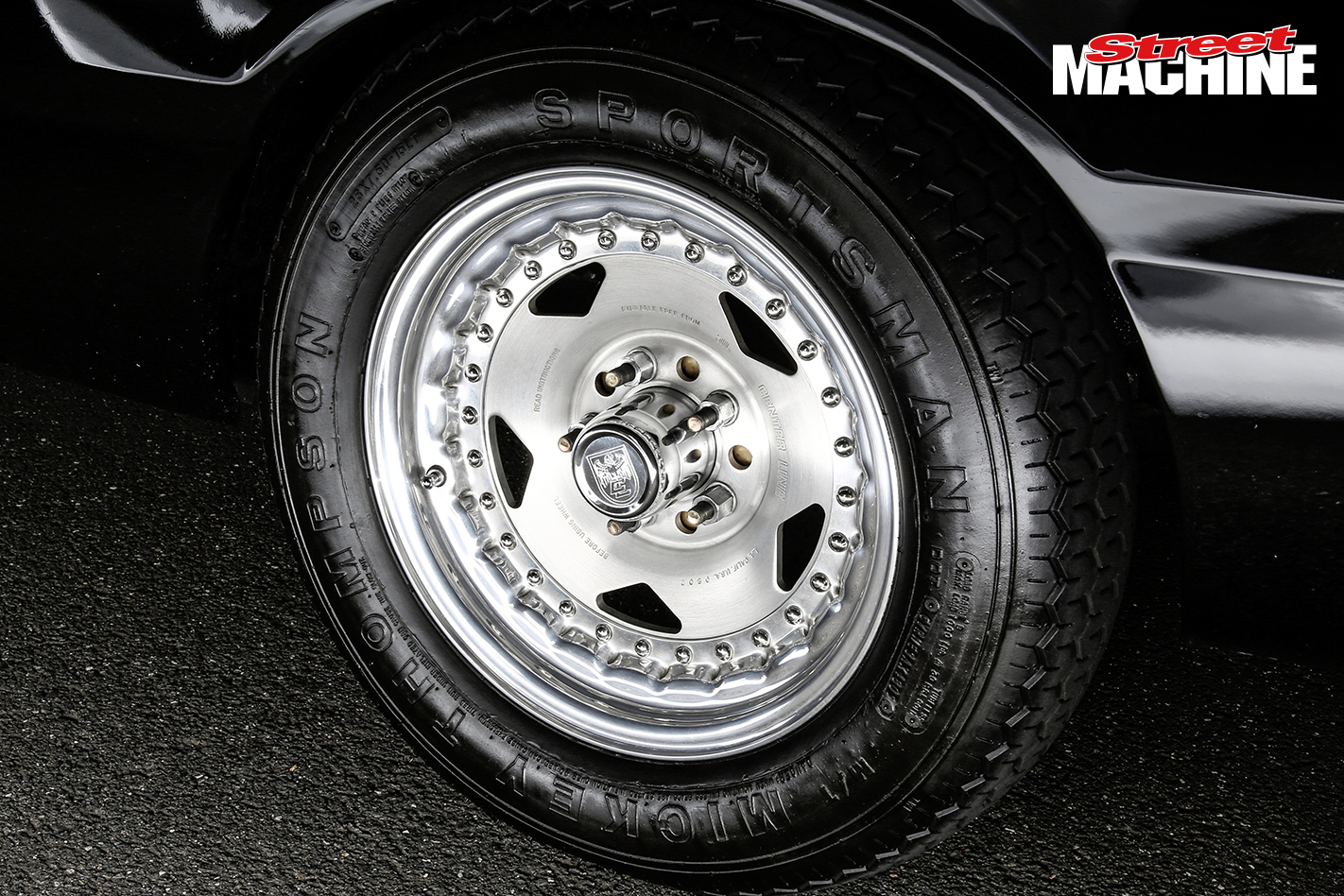 Wheels are Centre Line Convo Pros; 15x4 up front and 15x10 at the rear with M/T Sportsman rubber

Like any passion, it can only be as successful as your support network, and Con has hit the jackpot with fiancée Andrea. “Andrea loves cars and the engine builds and is more than happy to get her hands dirty. She is restoring a 1950 Dodge pick-up as her own personal ride, so we help each other out to both achieve our goals.”