Built to a budget, Martin Agius' sharp, satin-smooth Mustang is a testament to detail and diligence, not dollars

MARTIN Agius, owner of this outstanding Mustang, has had a thing for automobiles for quite a while. “I was that bloke up the back of maths class and the teacher would say: ‘Stop drawing cars,’” he remembers. “And I’d be leaning on the fence just looking at cars. Back then, all the hotties were Monaros and GT Falcons.” 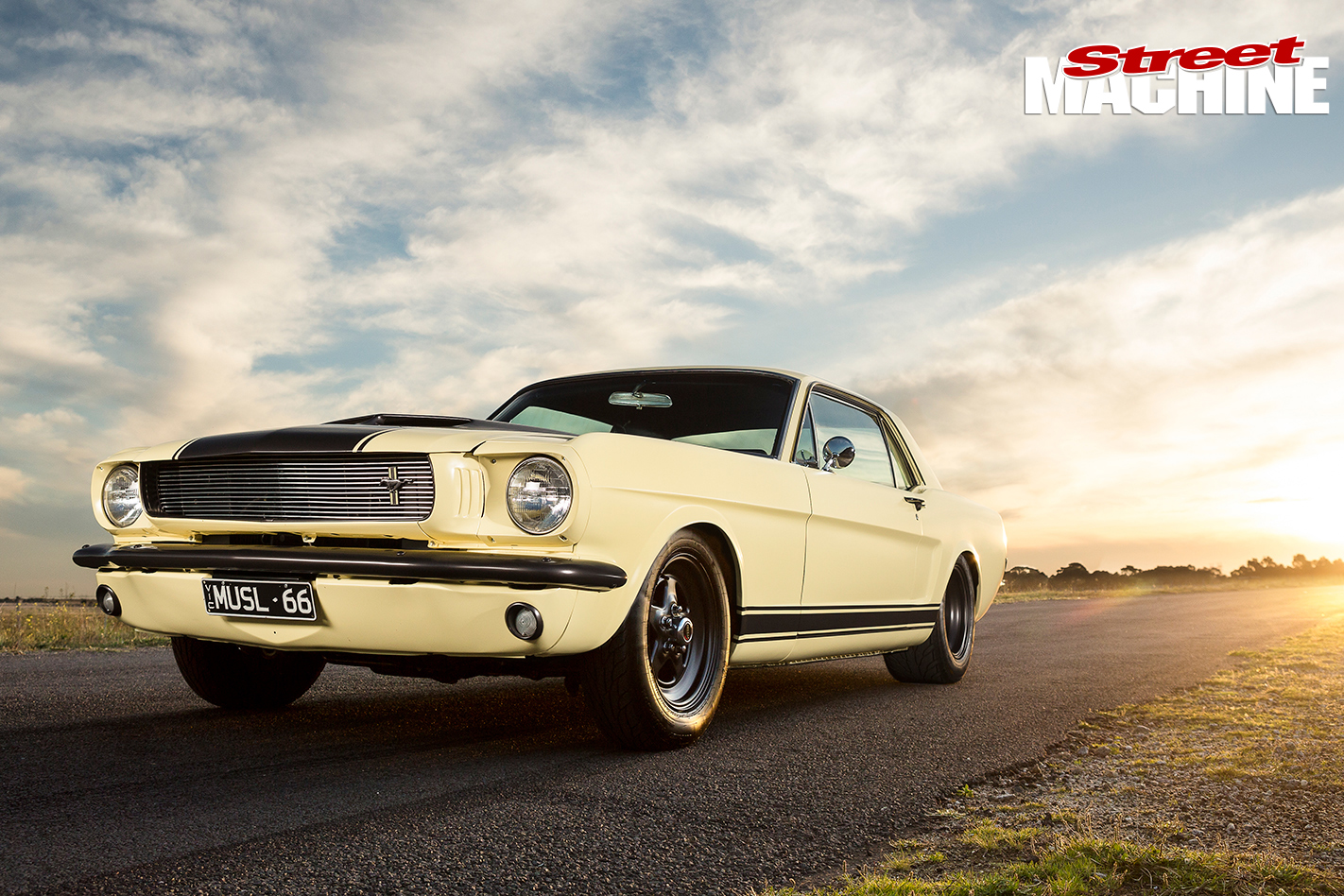 Though he’s now closer to 50 than 15, that teenage enthusiasm for cars laid the tracks for Martin’s career path – as it did for many of us. “I’ve been in the motor trade all my life,” he explains. “I started in spare parts for Mitsubishi. These days, I’m in sales with Jeep. Obviously I like cars, but I like dealing with people too.” 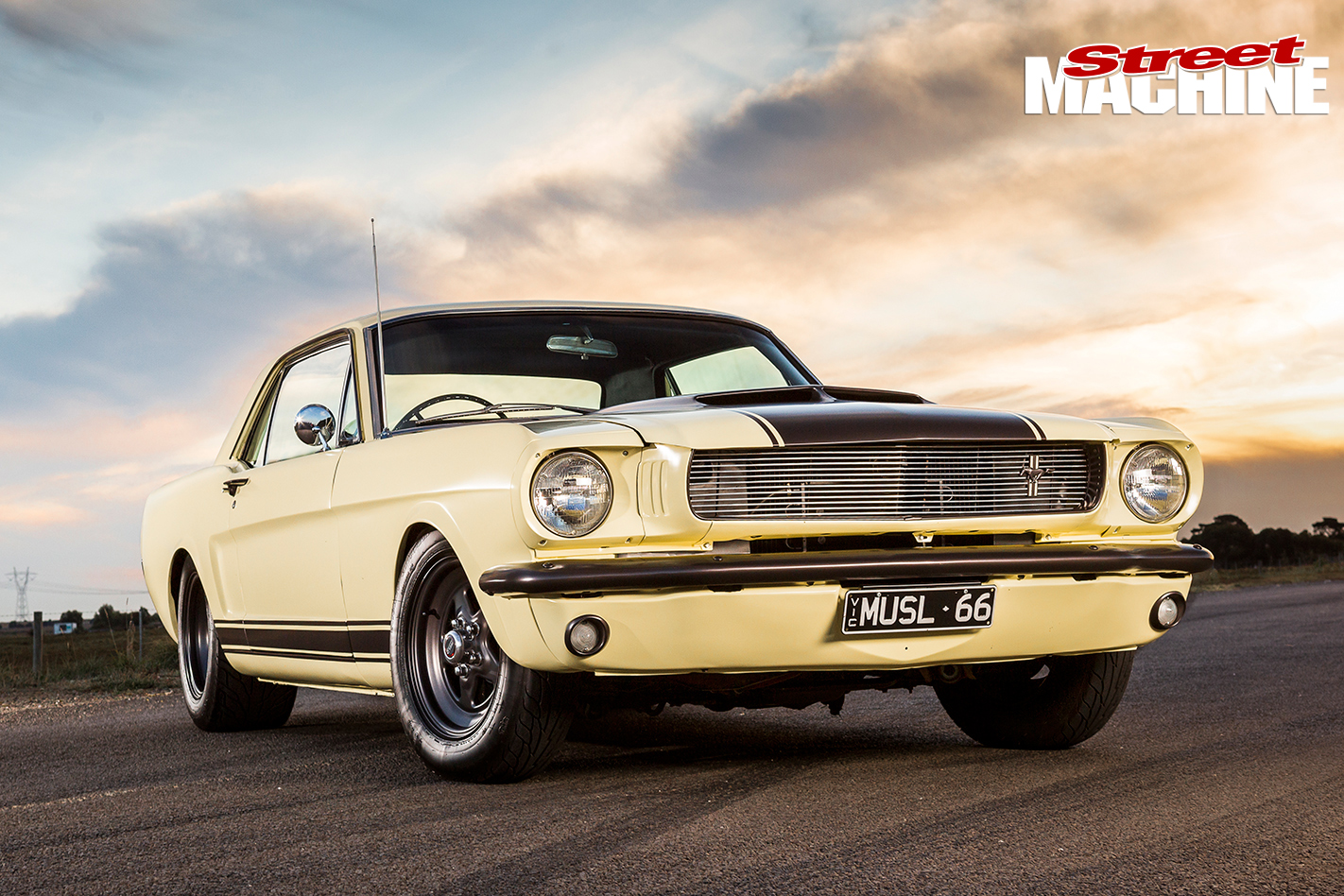 Along the way, he’s owned plenty and seen plenty. “A lot of cars we reckon are cool or collectors’ items today, we threw out,” he admits. “In my P-plate days, we were always buying some cars and killing others. For instance, I bought an XB V8 hardtop and put the running gear into a wagon! Can you believe that?” 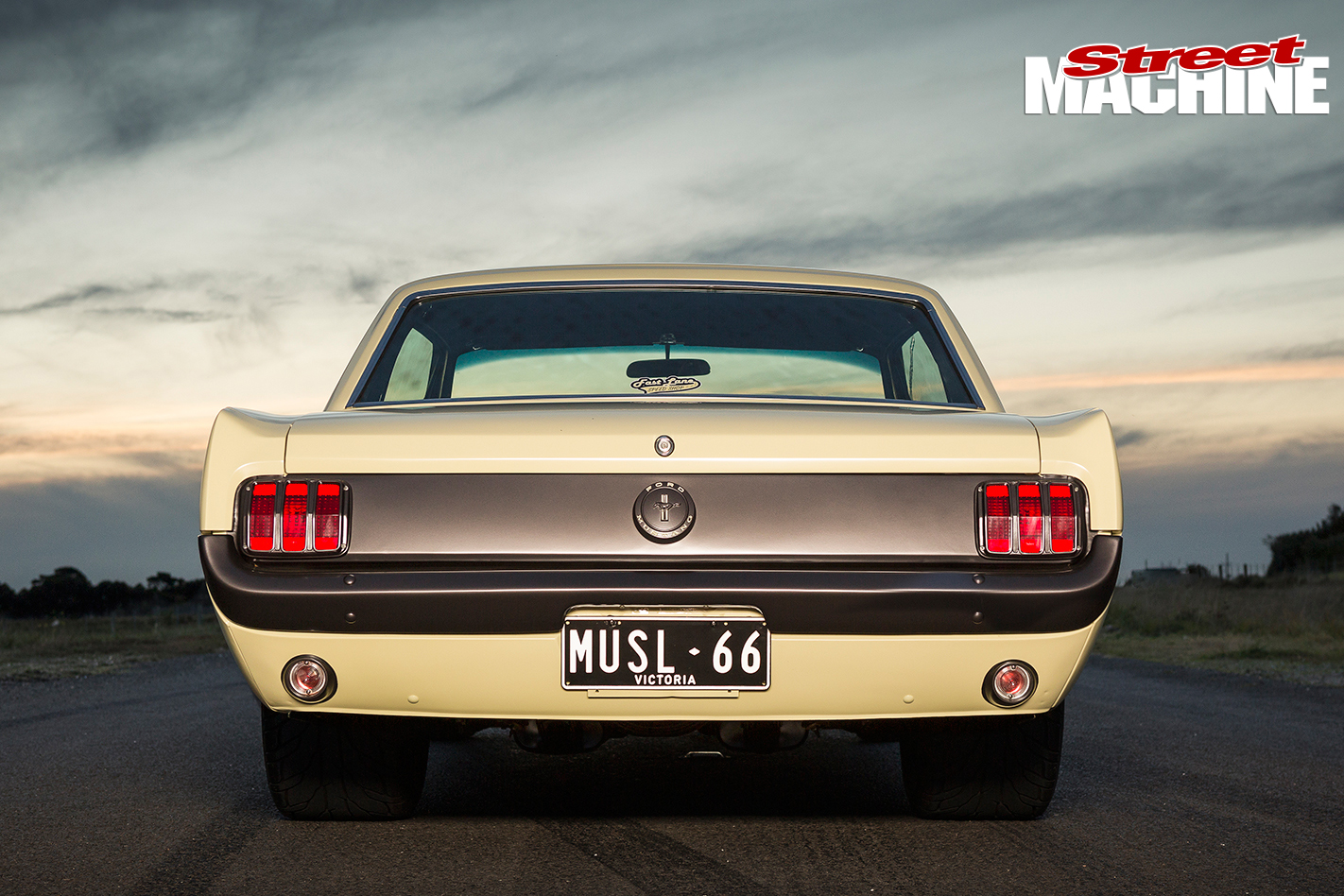 Martin bought his Mustang project around 2001. It was already right-hand drive, but it needed work. “It had a piece of timber holding up the left-hand door regulator,” he says. “Within the first week, I’d stripped it to a shell.” The car had already had an eventful life; Martin discovered turquoise and red under the silver paint it was wearing when he’d bought it. 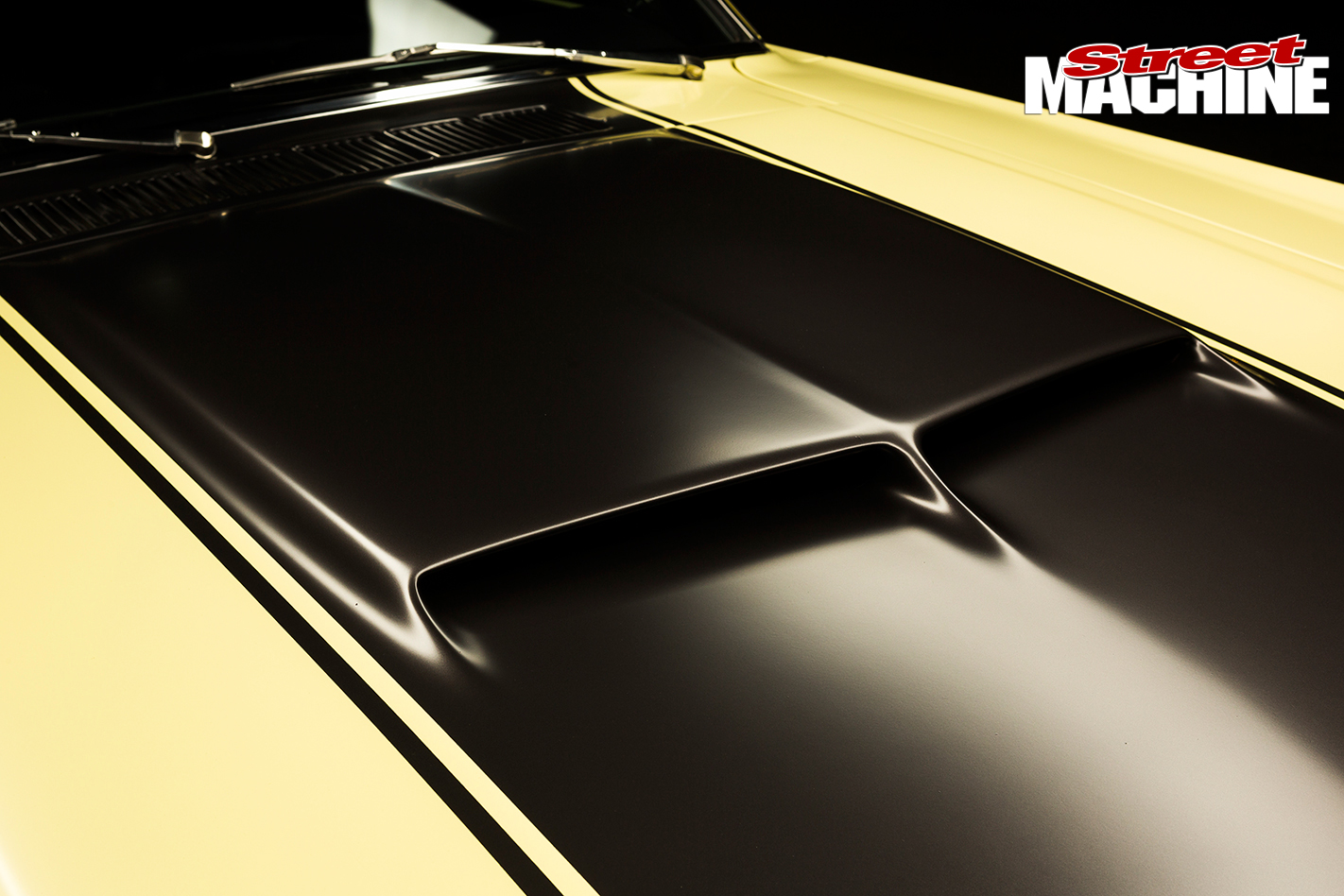 The bonnet scoop is a GT500 replica, to provide an era-correct factory tweak to the Mustang’s classic curves. Martin had it moulded onto the bonnet to give the carby some cold air

But Martin had another motive for buying a Mustang other than simply wanting to build a toughie cruiser. “My dad always wanted one,” he says. “It was his dream, but he was sick and unfortunately I lost him before it was finished. But toward the end, I took him parts of the car to show him how it was progressing, what colour I had painted things. 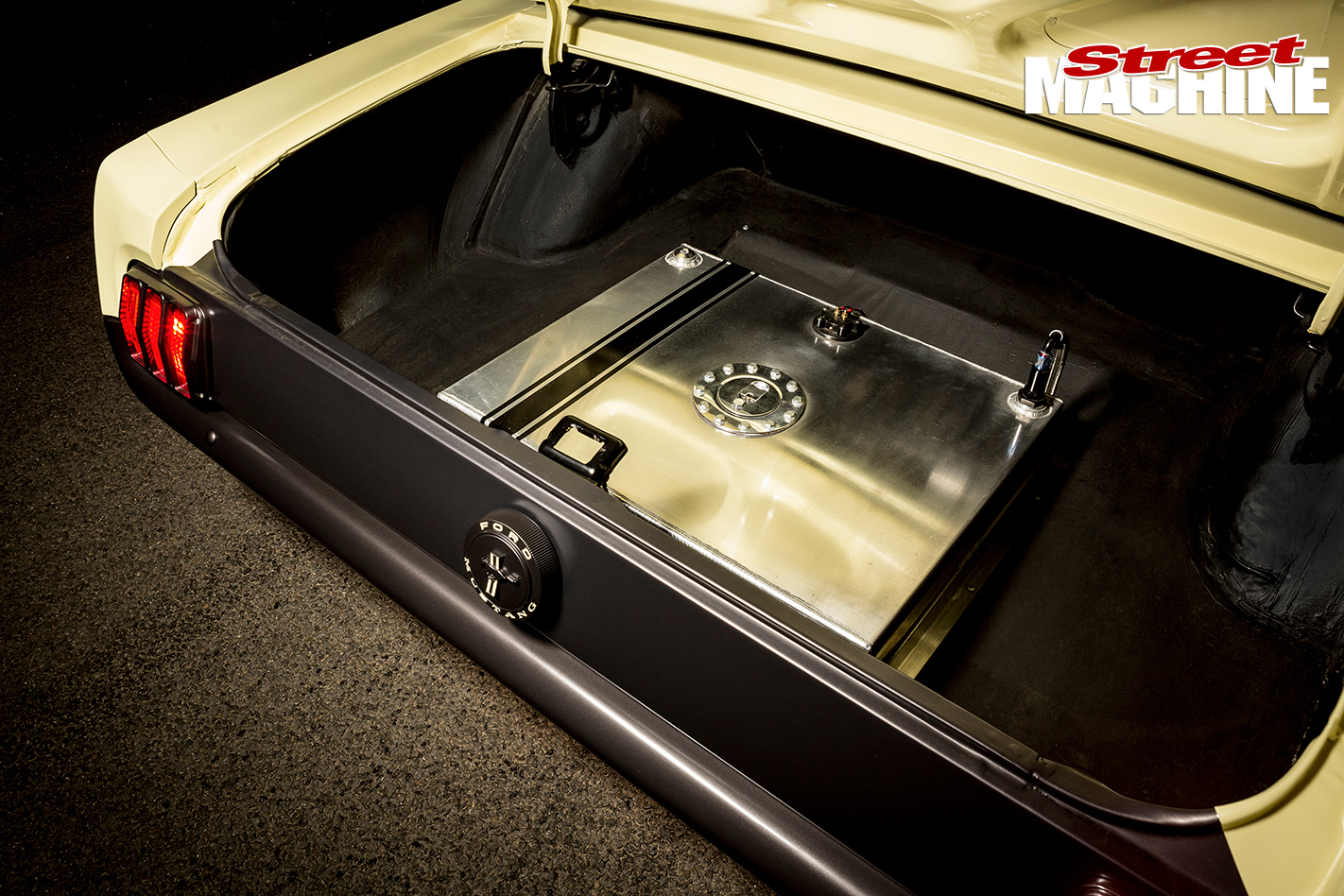 The boot-mounted tank carries 77 litres of fuel which provides nearly 400km of sunny Sunday cruising. Yep, it carries a matching stripe, too

When Martin completed the Mustang around 2003, it was bright yellow. Now, it’s a subtle stock-ish Springtime Yellow, the result of yet another build – one that came about by accident. 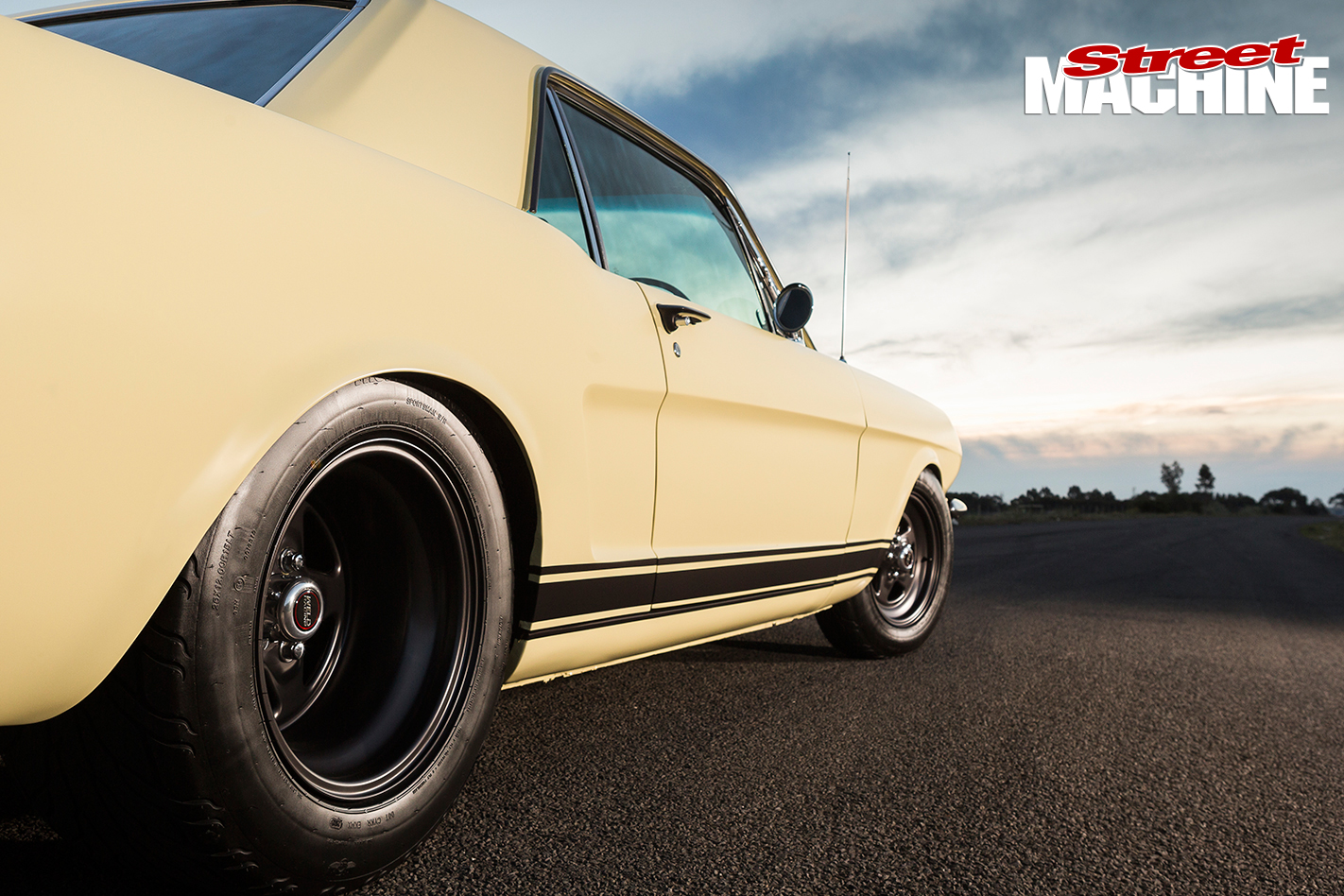 Those side stripes go right into the door jambs, too. Thumbs up!

“I took it to Bright [Rod Run] and the windscreen was hit by a stone,” he explains. “It’s insured by Shannons and they provide windscreen cover. But the installer damaged the car, so the car needed to be painted. 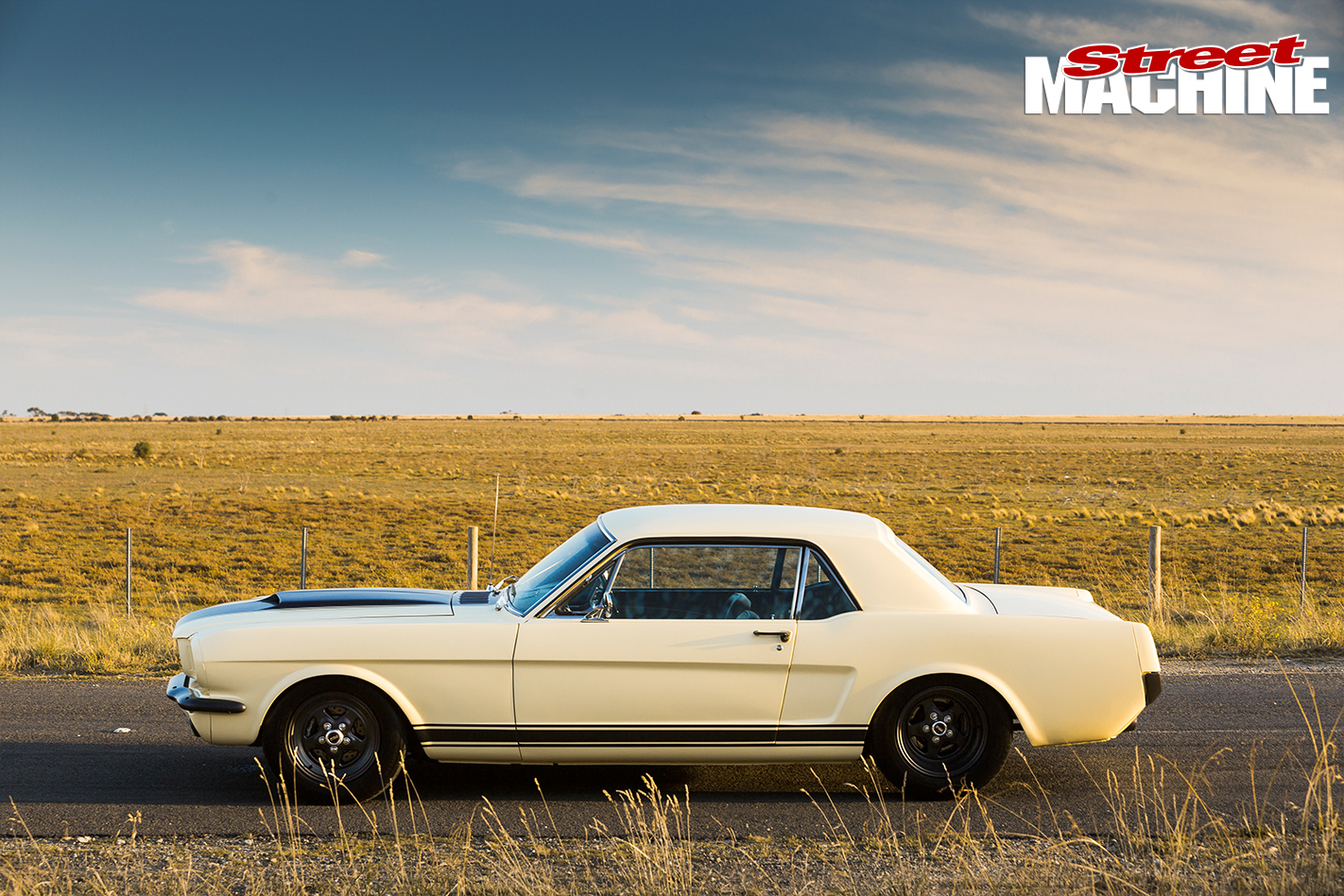 “Shannons approved the repair but the panel shop didn’t do a very good job. It took almost a year and there were silicon holes – fisheyes – in the paint. I called Shannons and they inspected it and agreed it wasn’t up to scratch, so to speak.”

To cut a long story short, the car ended up with Daniel at Fast Lane Speed Shop in Ballarat. “And that’s how it became what it is now,” Martin says, summarising Daniel’s eight intensive weeks of effort. “He did a super job – above and beyond what was expected.” 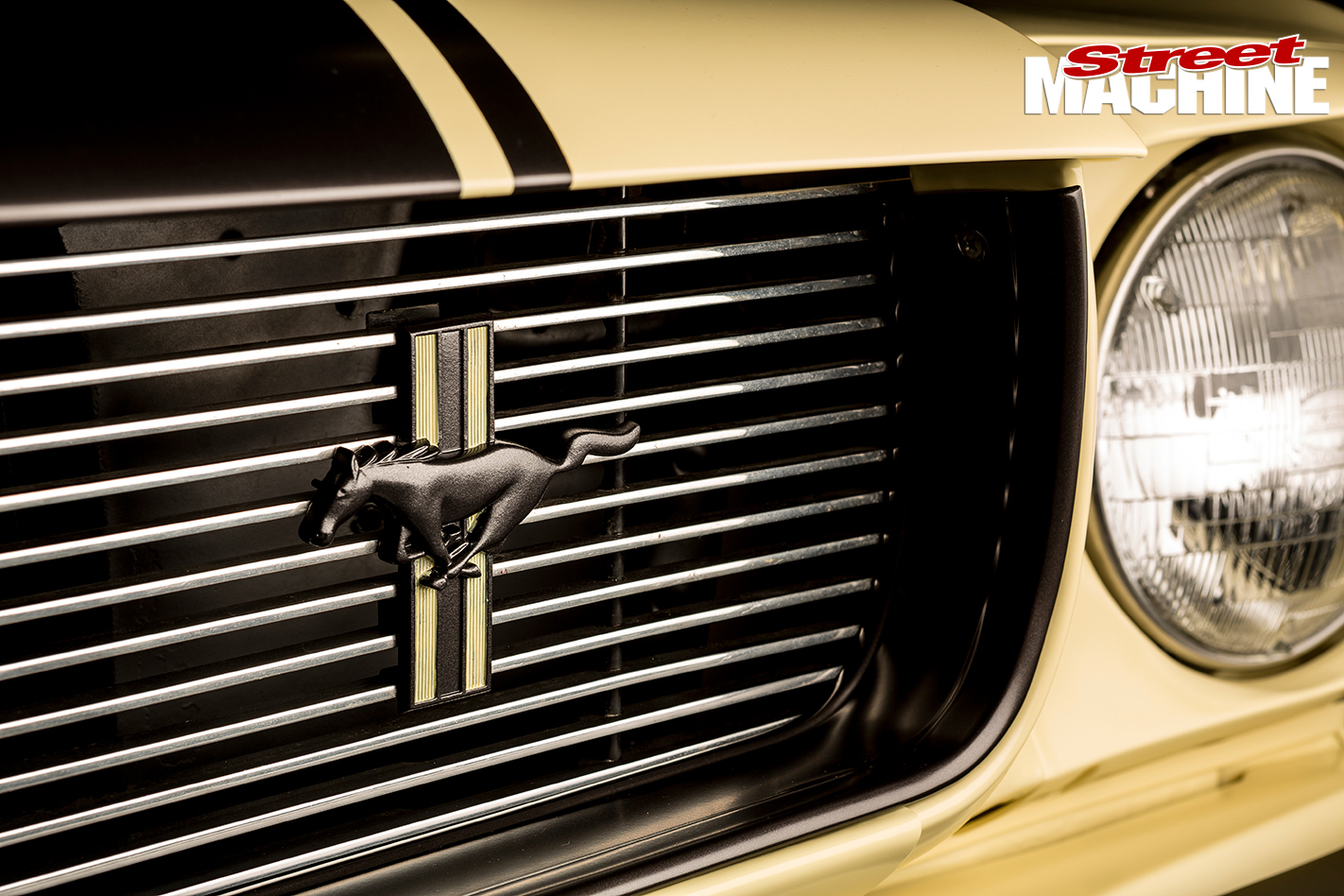 The front badge (and fuel cap) is detailed with Springtime Yellow

These days, the Mustang’s Springtime Yellow presents in a satin finish, which, with the dark grey highlights, gives it an air of confident, subtle toughness.

“I should have kept it hush-hush,” Martin says of his car’s freshened build theme. “There were too many opinions, you know what I mean? But I knew what I wanted – that old-school look with the tall-profile rear tyre. That’s a defining feature of ‘muscle’ for me. 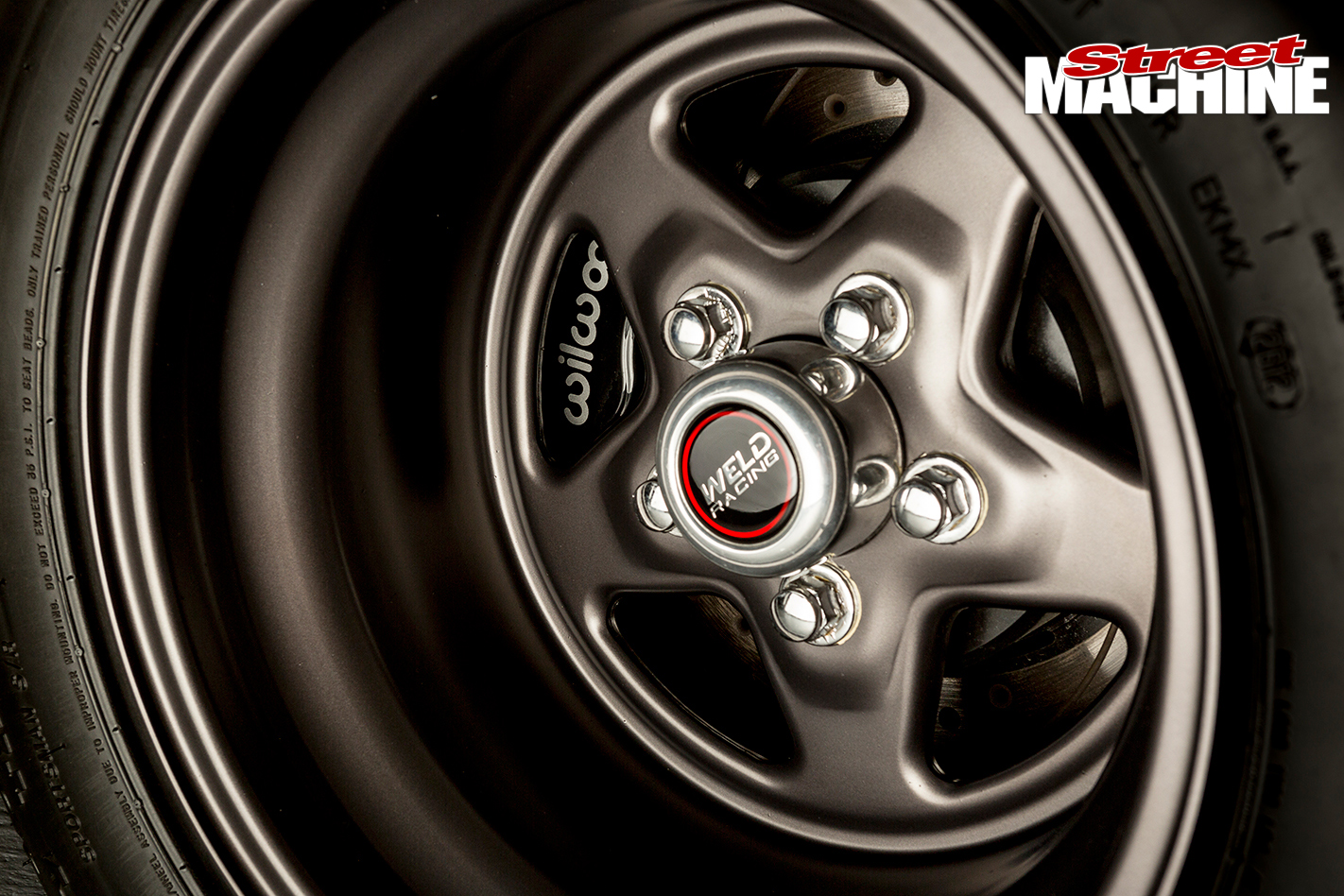 “I’ve gone through the stage, like everyone, of braided hose, polished billet alloy and turquoise paint,” he chuckles. “I wanted this one to look stealth.”

And he’s nailed it! Against the sunny yellow paint, the brooding grey of the engine bay looks like a brewing summer storm. Top stuff! “A few people who had their doubts have changed their opinion now they’ve seen it,” Martin says proudly. “They’re like: ‘Oh, yeah, now I get it!’” 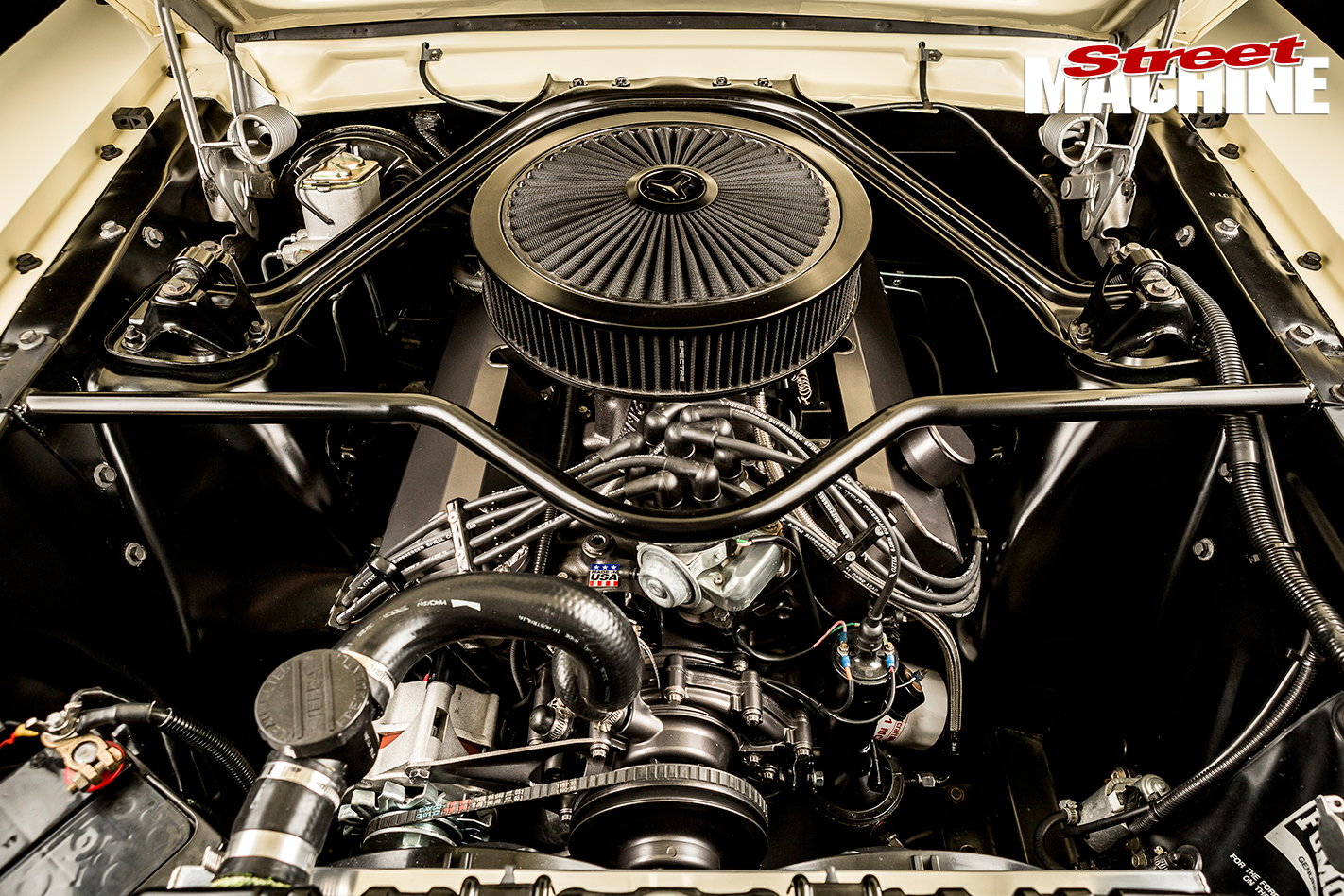 That engine is a five-litre Windsor pulled from an F-Series. It’s a roller-cam bottom end that produces a cruisy 350-ish horses. “It’s nothing wild,” Martin says of the Vince Vella-built, Holley 600-plumbed mill with 10:1 compression, a balance job and headwork. “Hey, it’s a street car. I can take it anywhere, anytime. I can get caught in traffic in the city and it just idles along.” 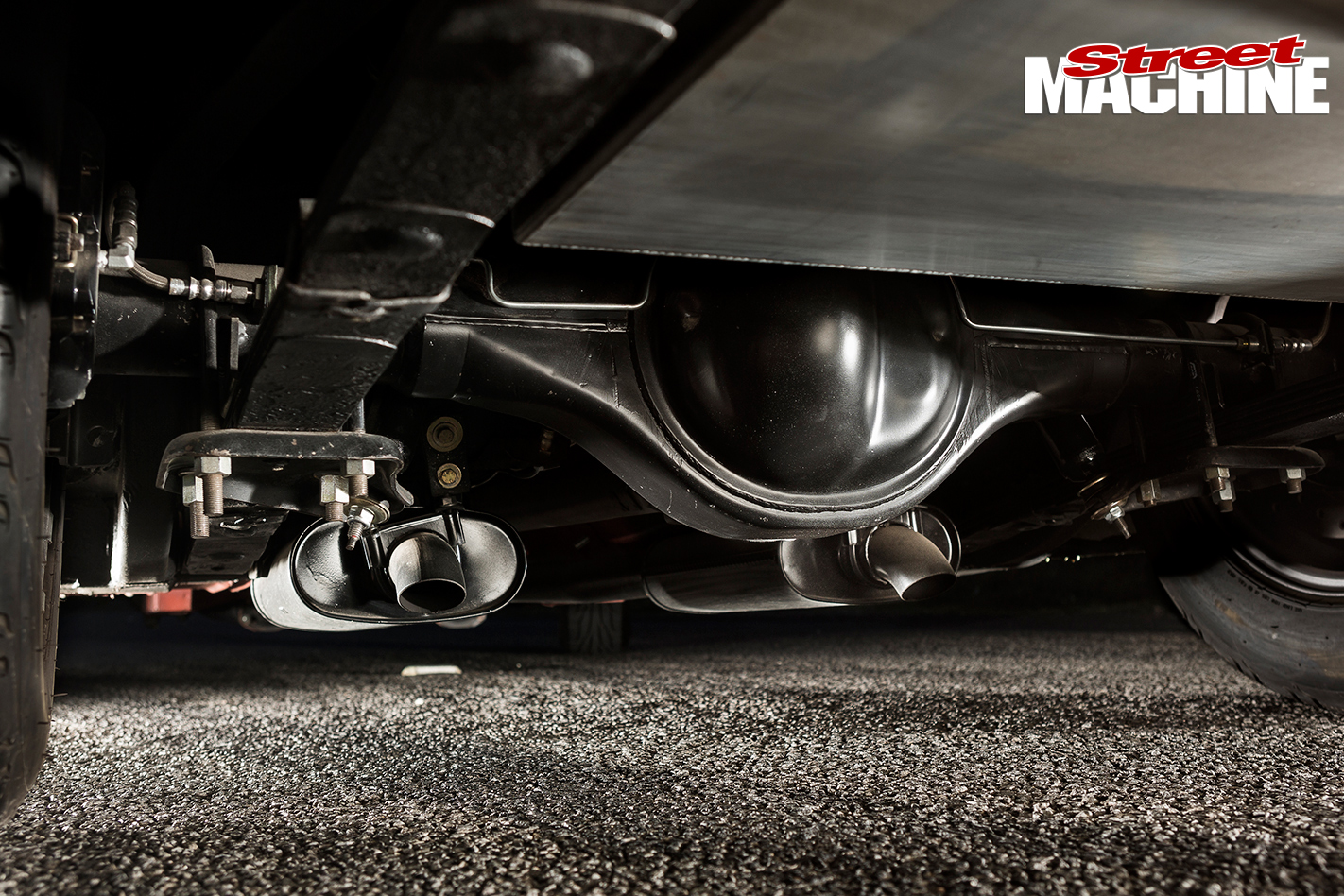 Behind it is a C9 three-slot auto with a 2500rpm converter and a nine-inch rear axle carrying 3.5 gears, giving a good blend of crack and cruise with those tall rear tyres – 26x12/15 Mickey Thompsons on 15x10-inch Weld Pro Stars. Behind those (and the 15x4.5 fronts) are Wilwood-clamped disc brakes. The suspension, too, has been upgraded with KYB dampers, Nolathane bushes and Pedders springs. 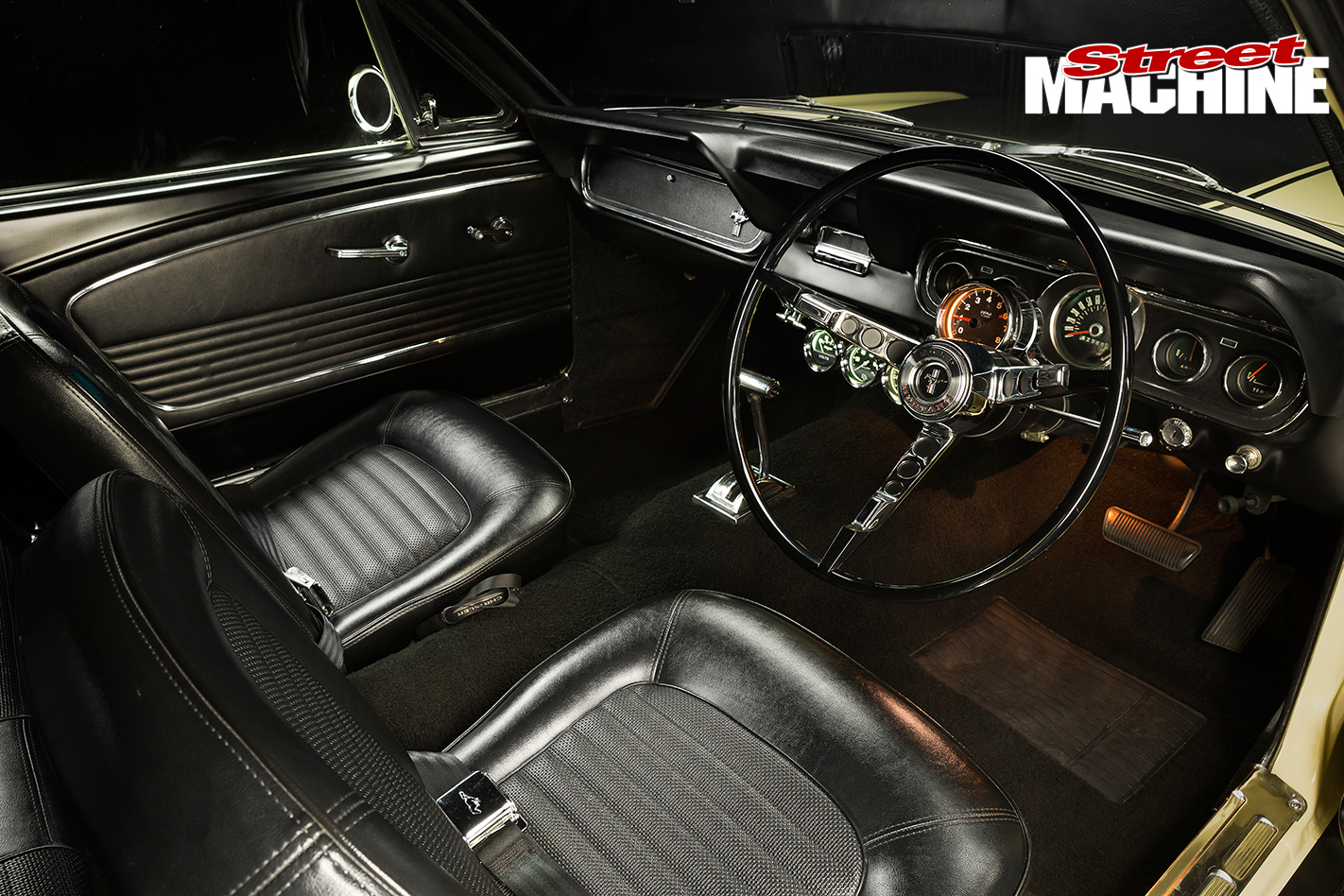 When it comes to interior trim, plain black never really goes out of style

Inside, Adrian at Kool Trim modified the rear seat to cope with the wheel tubs. Apart from that detail, the rest of the interior uses off-the-rack repro materials, with Martin, his brother Paul and eldest son Andrew doing the final installation. 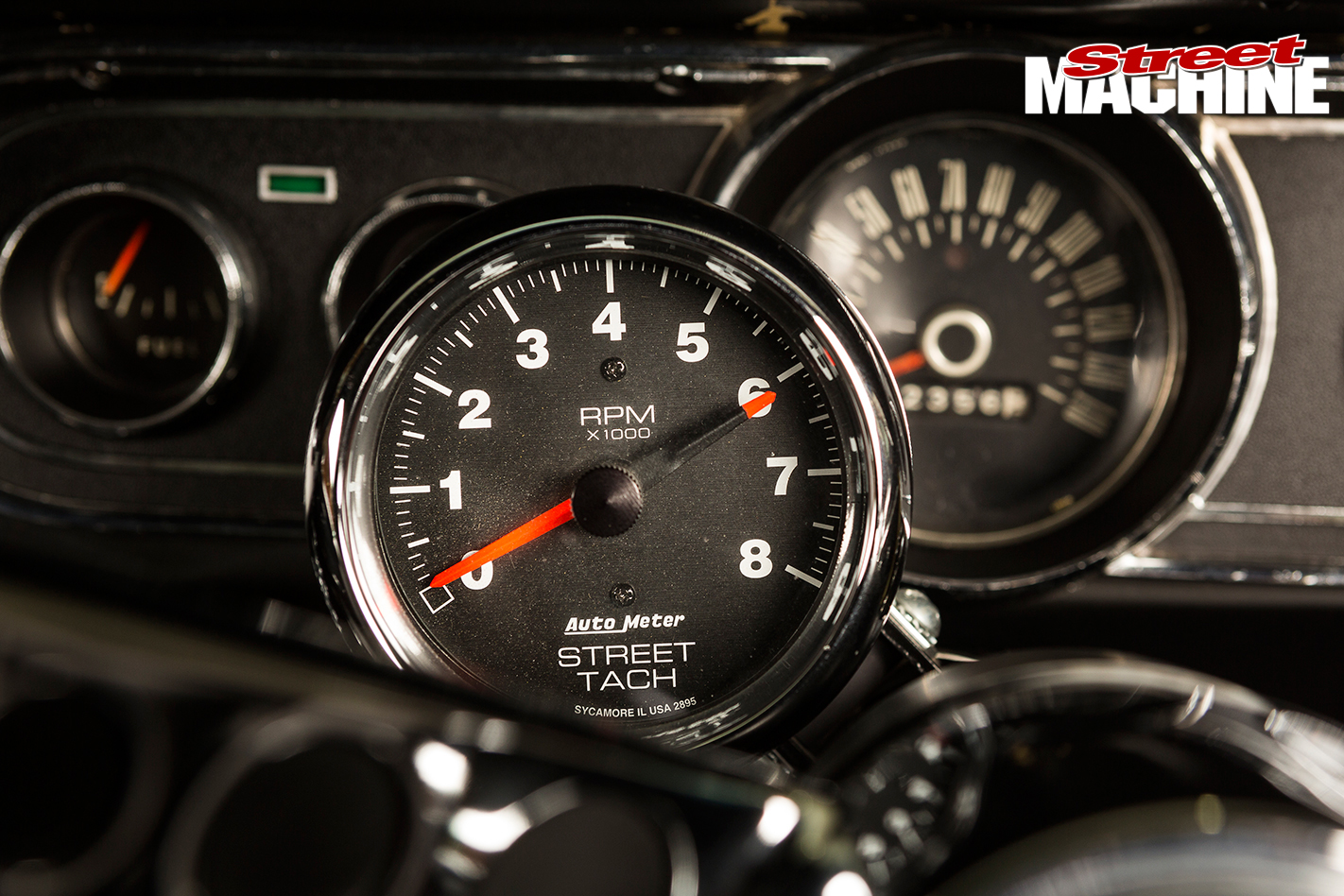 Column-mounted tacho and three extra gauges strung under the centre are aces. Martin is saving for a new shifter next

“I wanted to keep it simple,” Martin says. “I think, sometimes, less is more, and I didn’t build this car with a big fat chequebook. I’ve had to wait and save to get things done. It can be a bit of a juggle with a household to run!” 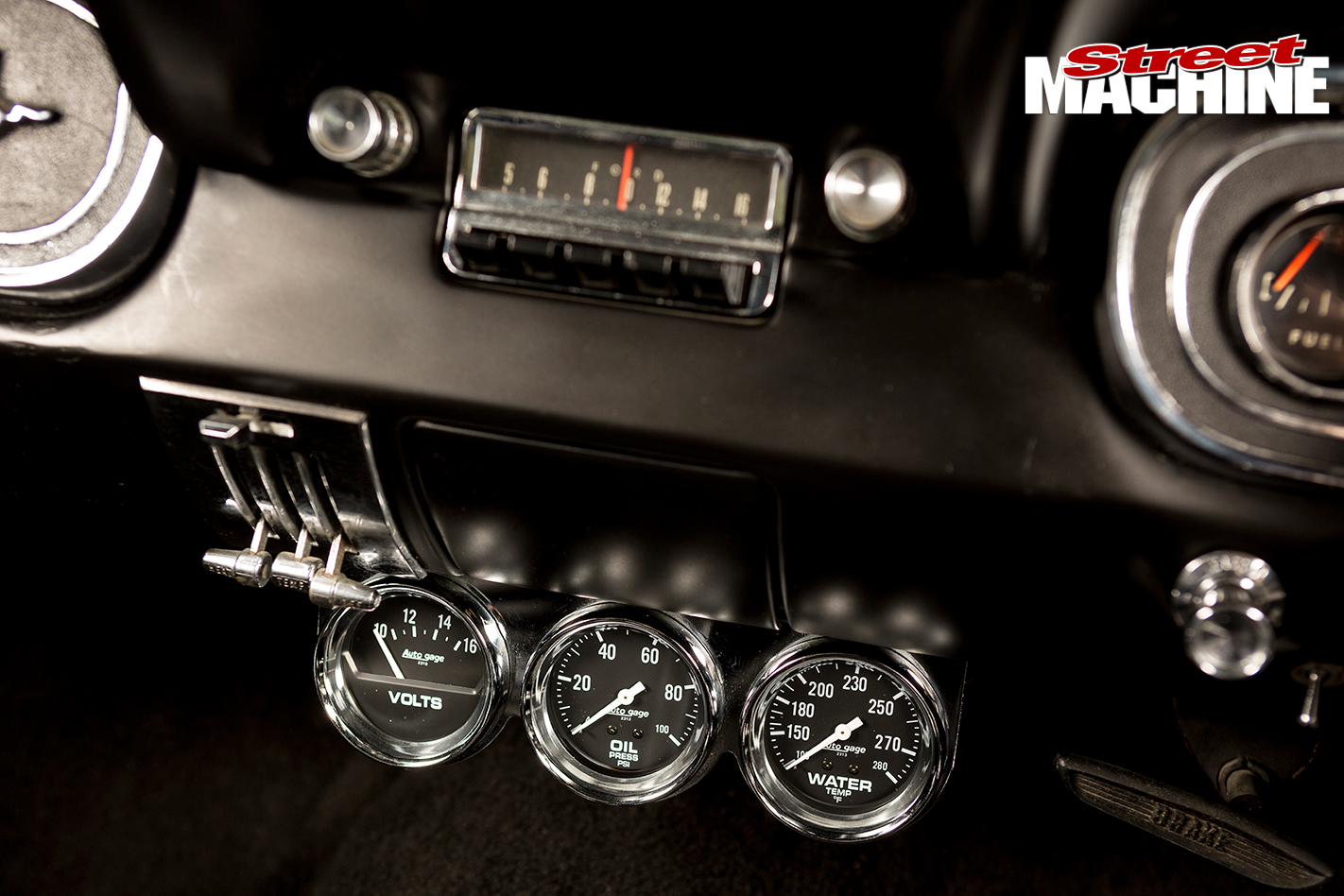 The end result is – as for many of us – so much more than metal.

“I really enjoy the lifestyle and the community,” Martin says. “On a warm Saturday night, the garage roller door will be open and if anyone drives by, they’ll see this ugly bald bastard working on his car! 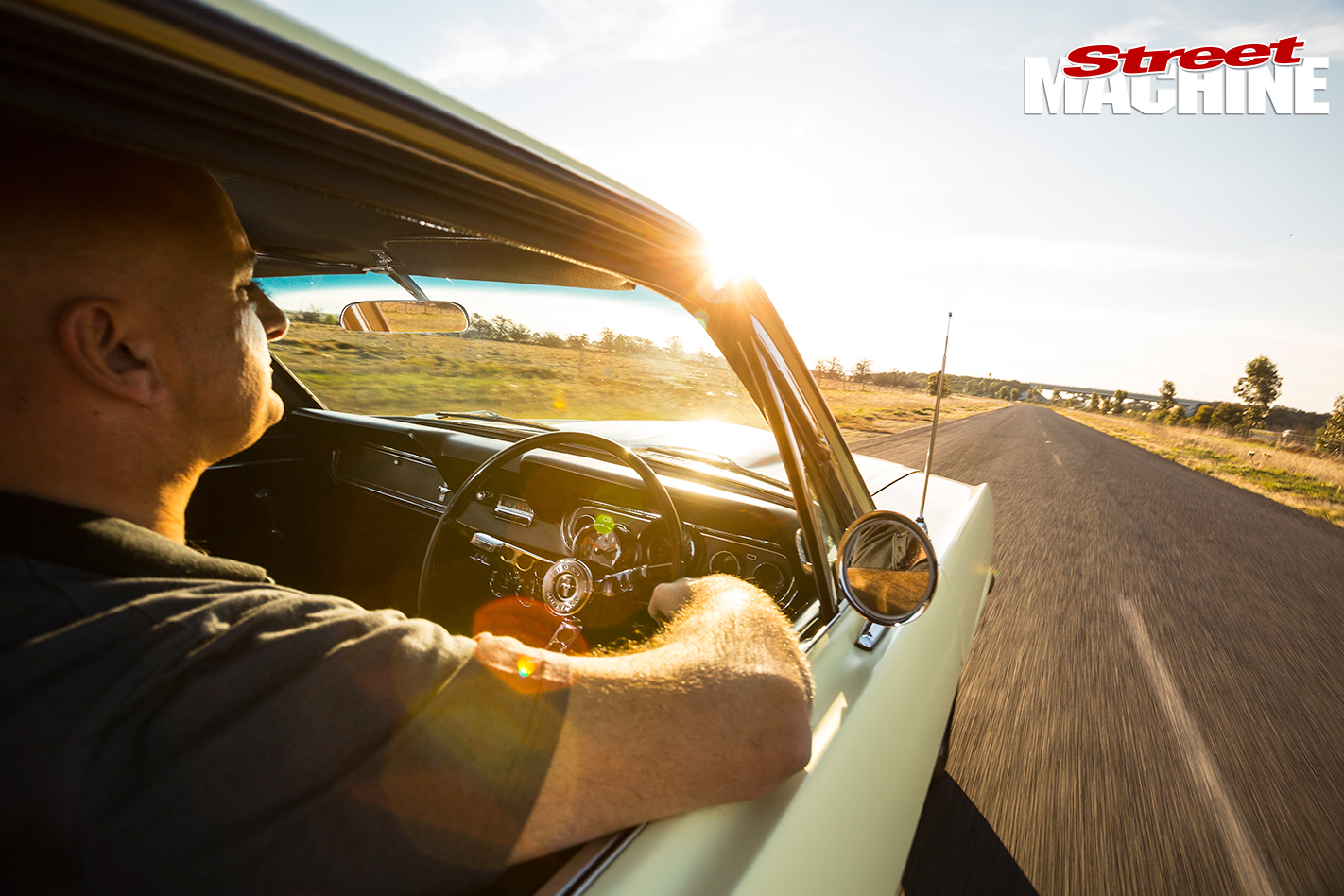 “I drive it anywhere; I don’t pussy it around, it’s meant to be driven,” he continues. “I usually drive it once a week. For instance, last Sunday, I did all the gardening then I took this for a spin.

“Mate, I’m happier than a dog with two dicks!”