Meet John Faraone's 1975 Valiant R/T Charger, a 2500hp two-tonne seven-second stunner that took on America. We caught up with John back in the October 2013 issue after his second consecutive Drag Week campaign. Here's the full feature...

IF THERE'S one topic that generates a flurry of correspondence from Street Machine readers, it’s the question of what constitutes a real street car. To some, a street car has to be 100 per cent street legal, while to others it simply has to see regular road miles to qualify for the tag. 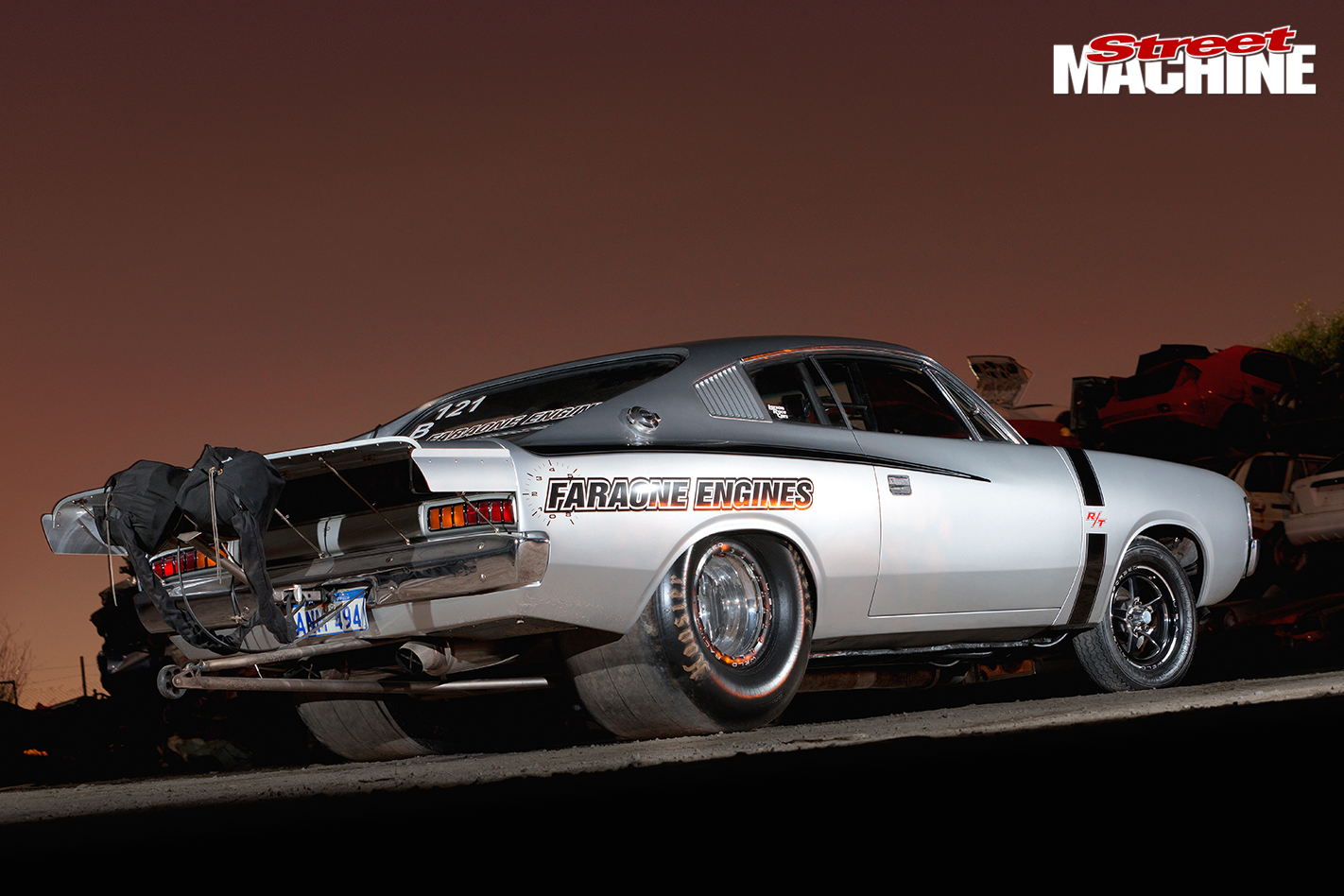 No matter which way you slice it, after West Aussie John Faraone hauled his stunning Charger halfway across the planet to prove its mettle at the 2013 Hot Rod Drag Week and succeeded, it’s very difficult to argue that it’s anything but. The 4185lb (1.9-tonne) monster ate up the hundreds of miles between each track at Drag Week 2013 with aplomb. It also ran as fast as 7.85sec@182mph, just two one-hundredths shy of the fastest time for its class.

At 18psi, the Charger’s twin-turbo big-block Chrysler makes 2500hp through a full exhaust and fits entirely beneath the bonnet. Massive rubber aside, the car still boasts the outward appearance of a neat old R/T Charger. And what’s more, it’s not just a façade – beneath the surface, a surprisingly high percentage of Valiant DNA remains. 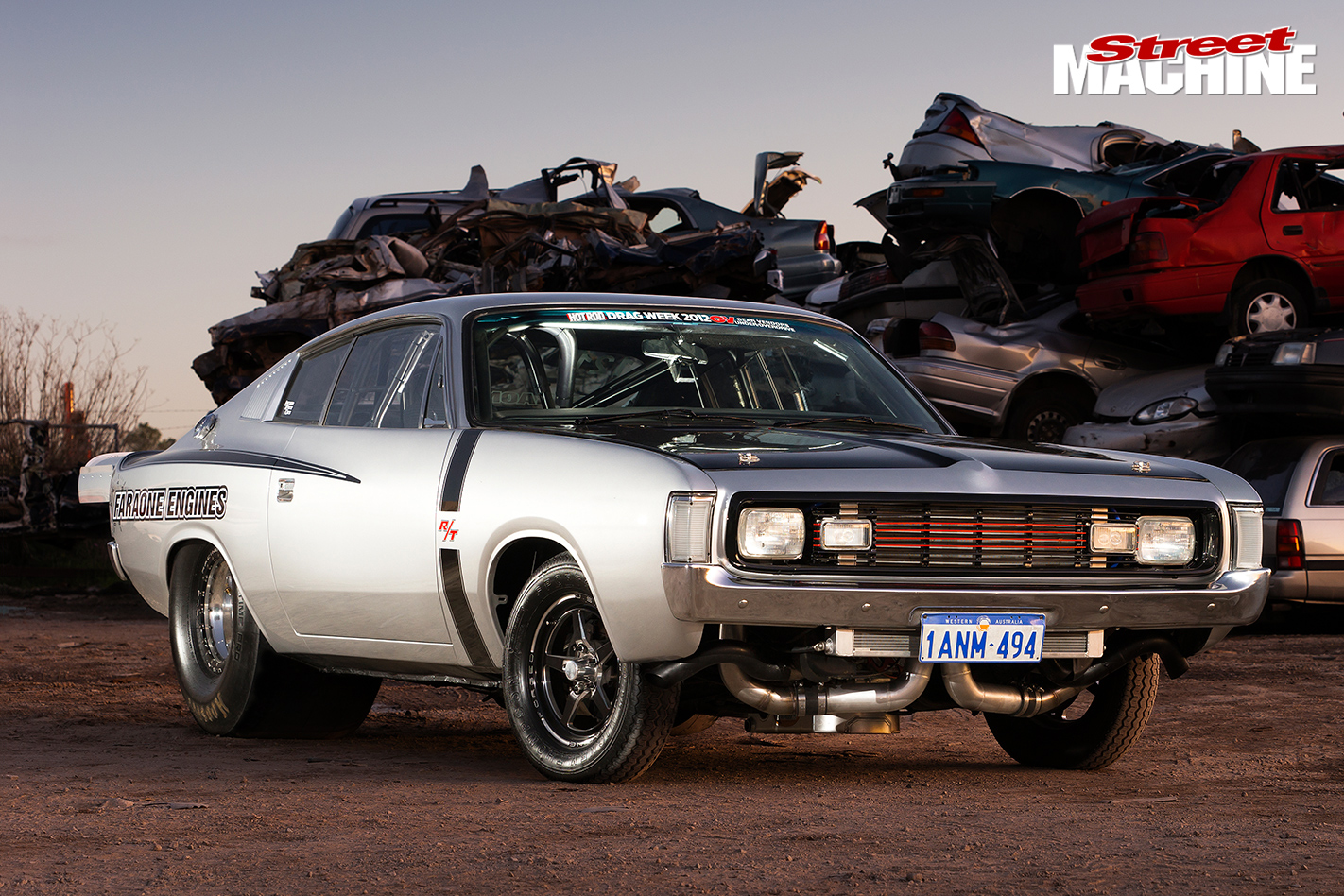 Sure, the car has a rear clip and a comprehensive funny car-style rollcage in order to comply with NHRA tech regulations, but other than that, its body and chassis remains 1972-issue Val hardware. The floorpan, firewall and front chassis are standard, and factory steel panels and wind-up glass windows are retained. The interior trim is stock with the exception of a set of Scheel seats, and it was only begrudgingly that John let go of the rear seat.

“The car is NHRA-licensed down to 6.5 seconds, and the chassis builder said there’s no way we could achieve that and still hang onto the rear bench,” said John. “It’s a very fast street car that races, not a race car that drives on the street.” 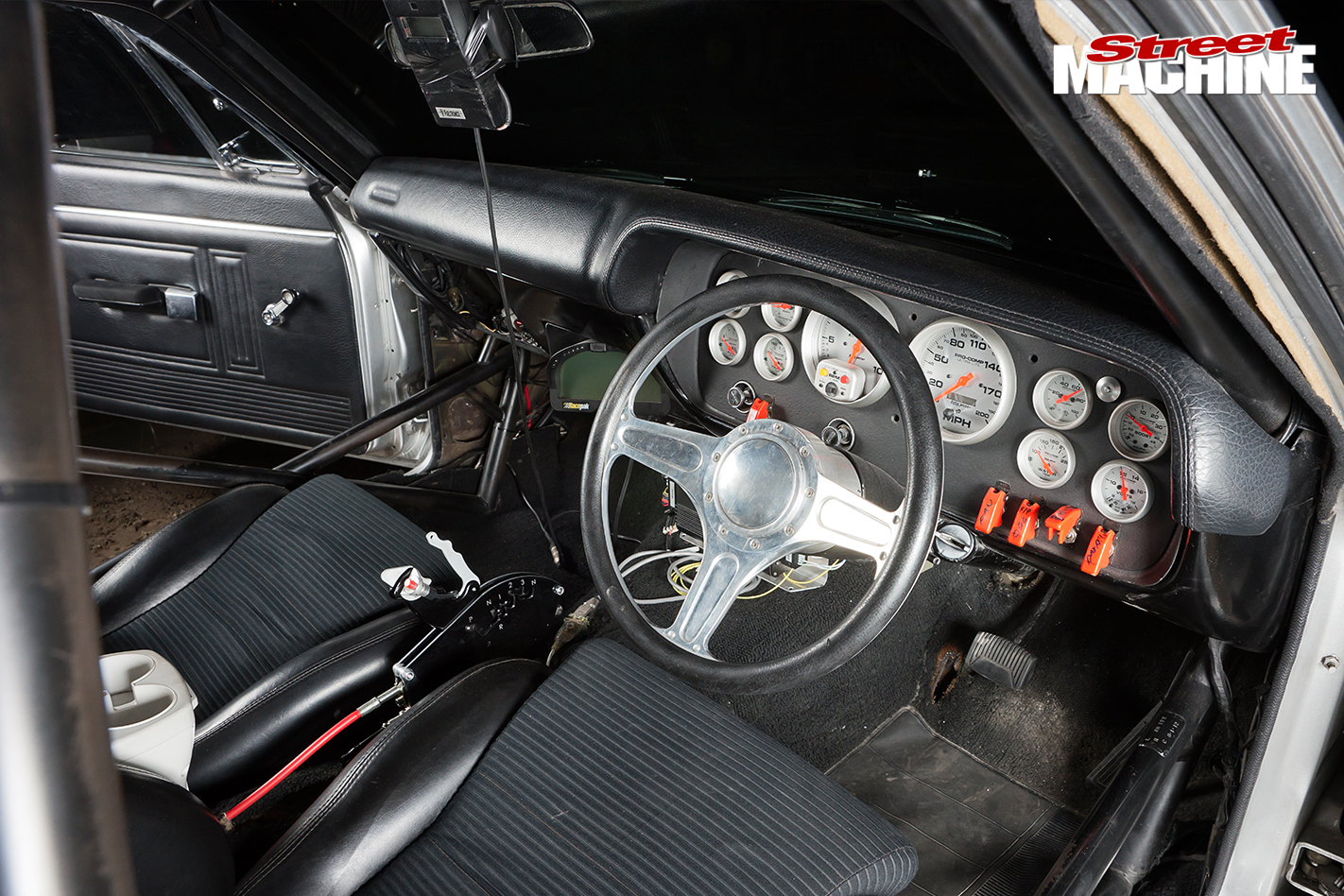 There's no aluminium race buckets, sheetmetal dashboards or carbon composite switch panels in sight. But, there is a half decent stereo and a 12V fridge mounted in the centre console!

While the Charger’s notoriety has grown in the wake of its two consecutive Drag Week campaigns, it has a long history of being one of the fastest street cars in Western Australia.

“I bought it 24 years ago from a young guy for $500,” said John of the car’s humble beginnings. “The front left guard was green, the front right guard was blue and the driver’s door was black. One of the studs for the front seat was being held up with a brick, so it was a bit of a roughie.”

John had a 12-second 265ci E38 Charger at the time, and through building a series of tough V8s for his mates and customers, he developed an interest in building a 10-second streeter for himself. He rebuilt his new acquisition, sprayed it orange and assembled a 440ci Chrysler with alloy heads and a small roller cam. 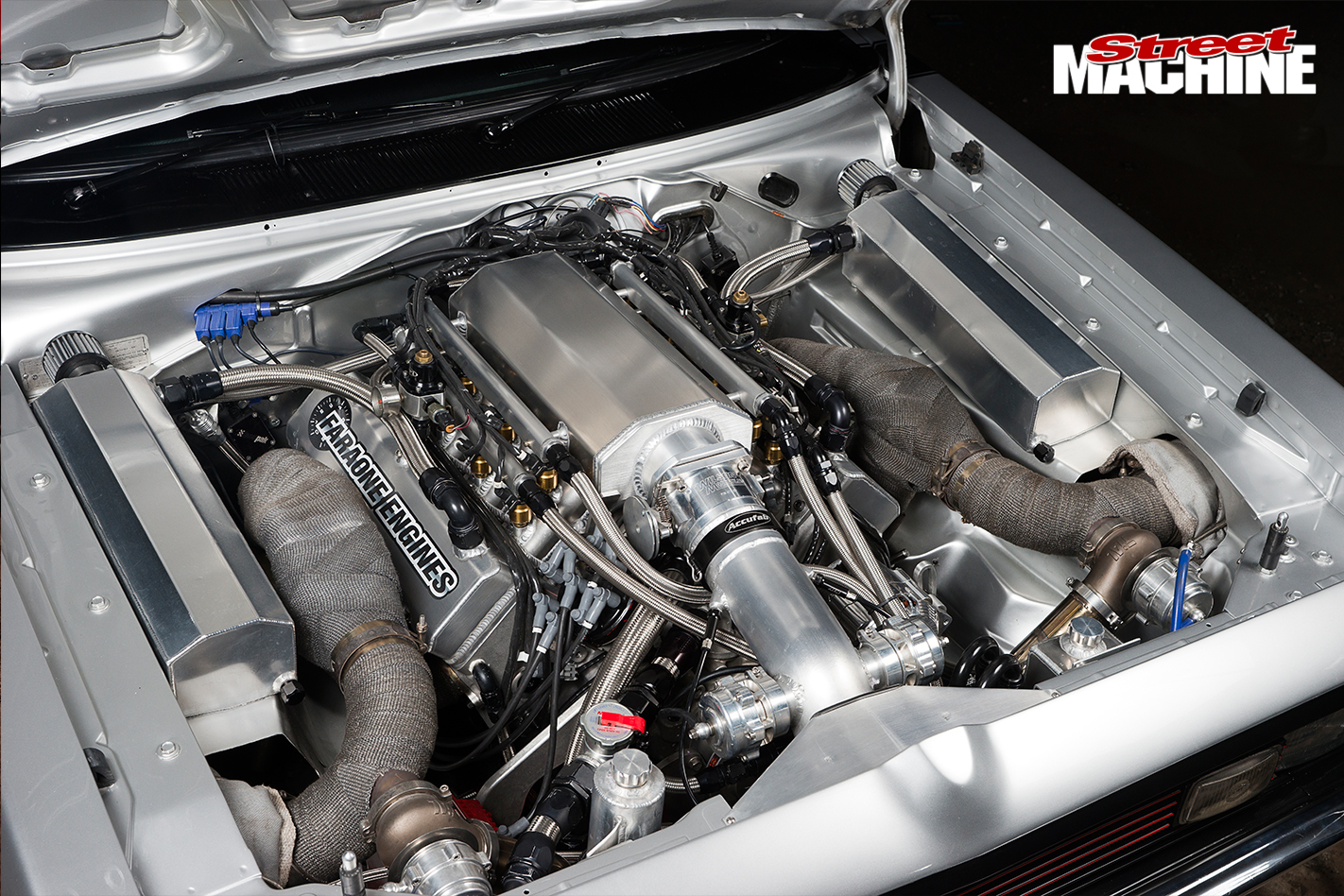 The 572ci engine is based on a Keith Black aluminium block with Predator heads, Bryant crank, Oliver rods and Ross pistons, managed by a Big Stuff 3 ECU

“It was Perth’s first nine-second street car, and it did really well in dyno comps too,” said John. “It was the first car in WA to make 500rwhp, 600rwhp, 700rwhp and 750rwhp naturally aspirated, and the first to make 1000rwhp on nitrous.”

In 2000 John took it off the road to work on other cars and, before he knew it, nine years had passed. In January 2009 he made the call to do something and seven short months later, it was ready to race. Completely reborn with stunning silver duco and a mental 572ci Chrysler big-block fed by a pair of Garrett GT5518 88mm turbos, the car was a hit with the punters at Powercruise, where John beat on it all weekend. 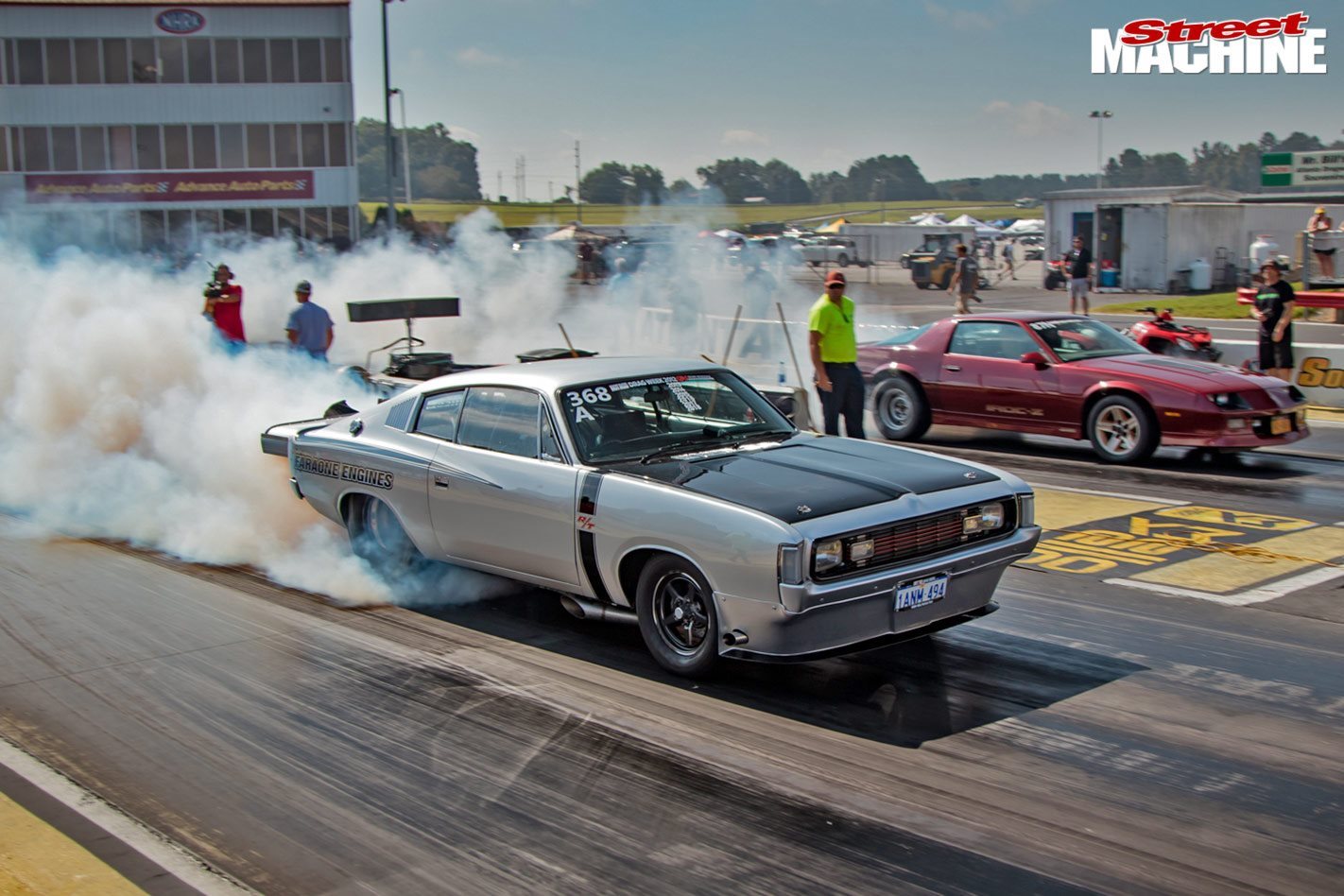 John's goal was to run 7.50sec on 18psi and then start winding some boost in it. He built it to cop 50psi

“It wasn’t until October 2010 that I got time to take it to Kwinana to make a pass, and that’s when the Powerglide transmission nightmare became apparent,” he said. “On 18psi the car ran 8.60@170mph and broke the trans on the next run. Fifteen ’Glides later, I still hadn’t done a real pass.”

Considerable R&D was invested in the transmission, and with John hoping that he’d finally found a gearbox that would cop the brunt of 2500hp overcoming the considerable inertia of a full steel street car, he made the call to head to Drag Week 2012.

“The motivation to go to Drag Week came from the fact that I’d had the Charger for so many years and, while it had evolved and got faster in that time, I’d always maintained that if I couldn’t drive it on the street then it’s useless.

“I never wanted a drag car, I wanted a credible street car with a lot of power. There’s nowhere in Australia to prove that you have a quick and reliable 2500hp street car. Drag Week is the only place you can do it, so that’s what I decided to do.” 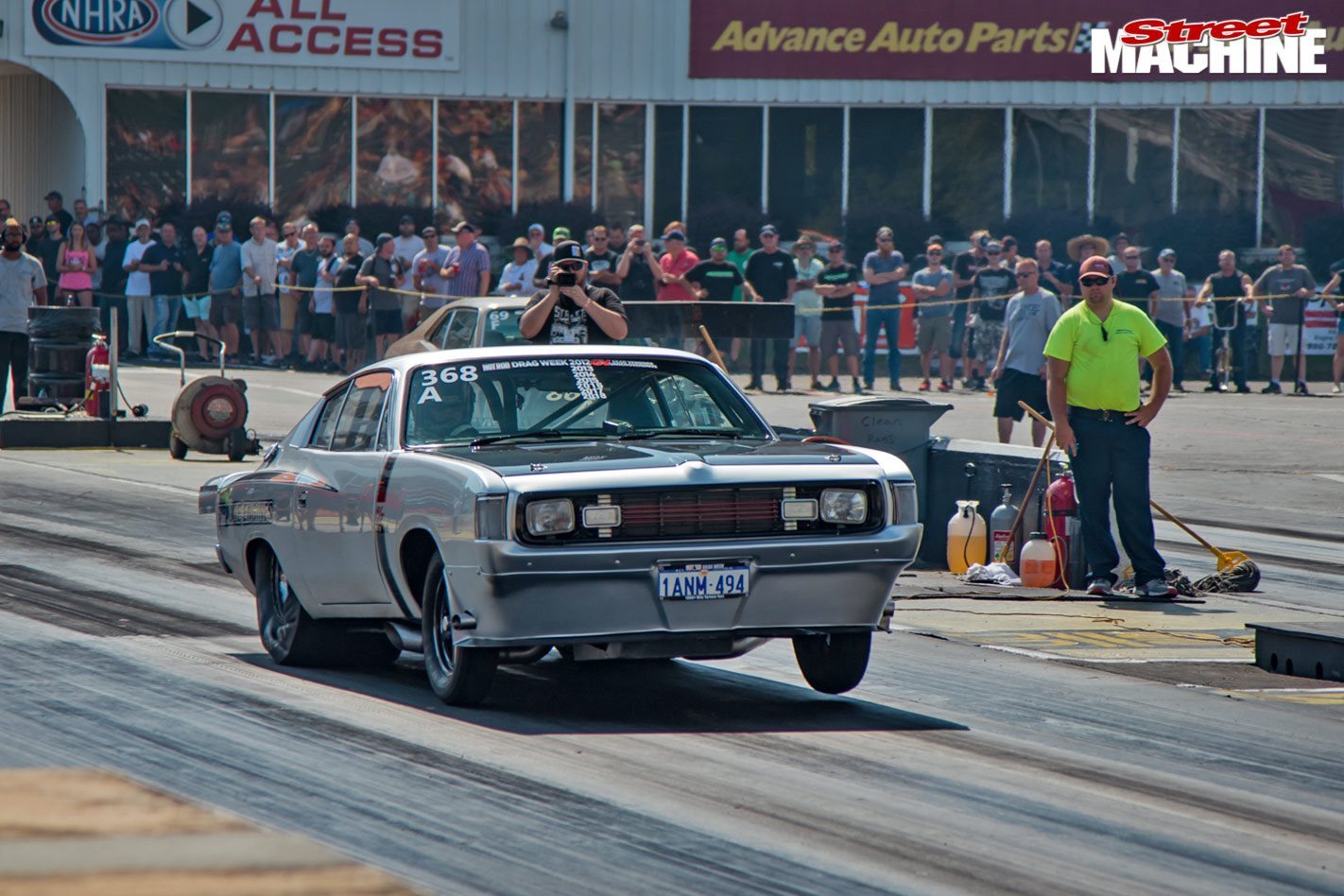 Unfortunately John’s transmission woes followed him across the Pacific, and over the course of Drag Week 2012 he managed to junk another five top-of-the-range Powerglides from a number of leading transmission shops. In fact, he had the transmission in and out of the car a phenomenal eight times over the course of the week, and paid $1500 for hotel rooms he never slept in because he spent each evening crawling around on his back under the Charger in the car park. When you consider that you have to perform all work without any outside assistance, that’s a marathon effort. But John persisted, running a best time of 8.2@170mph and clawing his way through the event to be declared a finisher.

American transmission guru Carl Rossler then prescribed one of his Pro Mod XHD 210 transmissions and a Pro Torque stall converter, and John faced Drag Week 2013 with renewed confidence. The Charger’s best time of 7.85@182mph set on day five was lineball with the class leader. Not yet content, John drove it back to the track in Kentucky the very next day and ran three more sevens, with a best of 7.79@184mph, full weight and on radial tyres.

“I was happy, but it’s being going to run a seven since 2009, and it was frustrating that it took so long to get there because of transmission problems. But it’s great that that the car has achieved what it achieved in America and at Drag Week. You’re rubbing shoulders with people that have good resources and fast cars.” 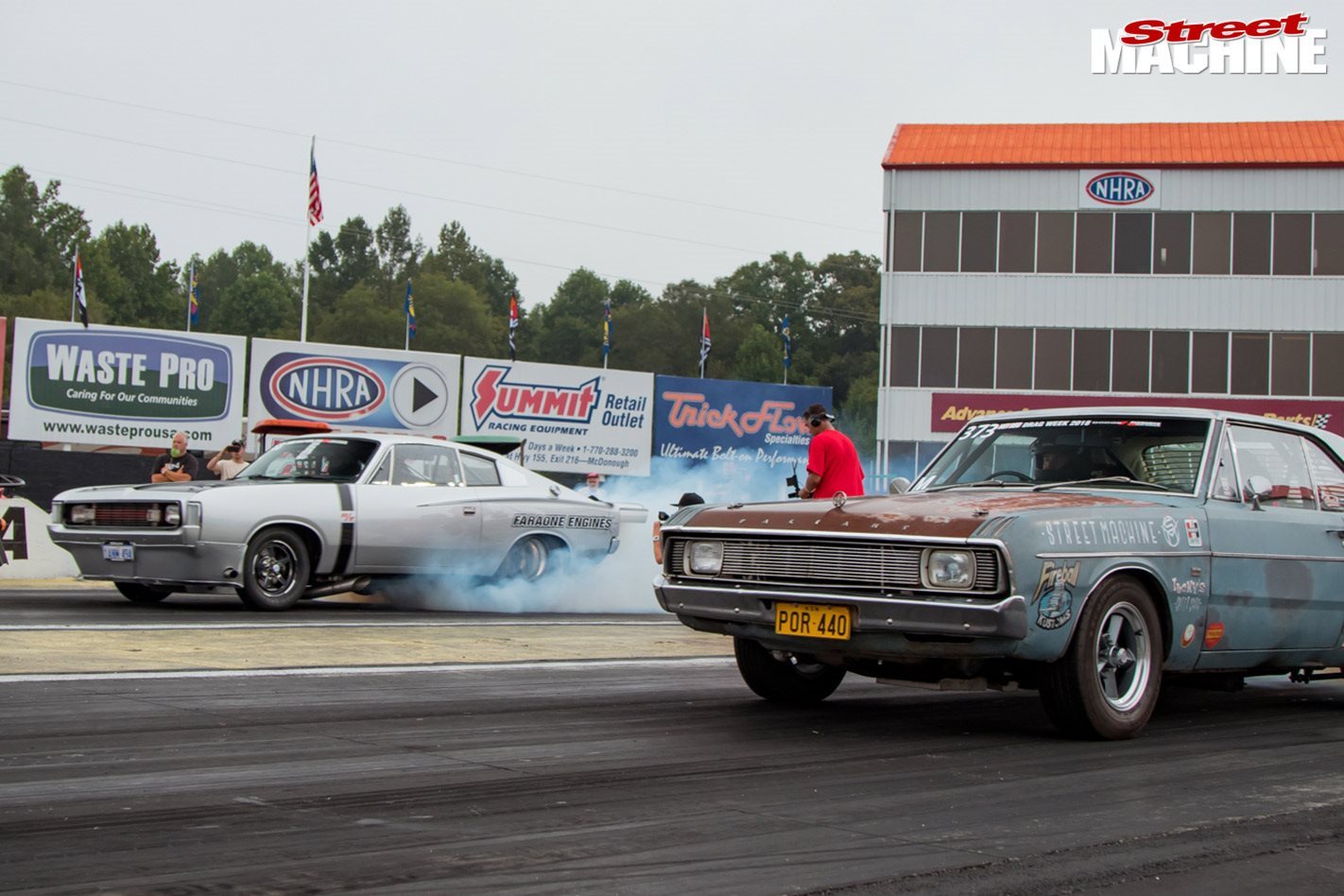 Having owned this car for 24 years and an E38 even longer, we asked if John was a dyed-in-the-wool Mopar man. “I love Chryslers, but I’m a car enthusiast across the board. I’m not really a Mopar man; I’m an engine guy. I like seeing the results on a dyno, reading a number and seeing how efficient the combination is.

“The Charger weighed 4185lbs at Bowling Green with me in it and a quarter of a tank of fuel, and it’s that heavy because that’s the way I want it – a full steel street car. Nobody is making me race a car that weighs almost two tonnes, and I guess it will always be handicapped because of that, but I don’t want a fibreglass race car.

“It was perfect in between tracks at Drag Week; you wouldn’t believe how comfortable and quiet it was on the highway, and it sat on 85mph at 2400rpm with the trailer on the back. Flick the Gear Vendor on and it’d happily cruise at 100mph – that thing made the drive between tracks so much easier. We left the track at St Louis pretty late and hit a whole heap of peak hour traffic in pretty intense heat, and the water temp just sat on 185 degrees on pump gas; it loved it.”

When the car returns, John plans to do some preventative maintenance to the diff, fix his boost control issue, perfect the tune on 18psi and hit the track. The goal is to run 7.50 on 18psi, and then start winding some boost into it. John built the motor to cop a heady 50psi, so in terms of horsepower, there’s plenty more to be had. 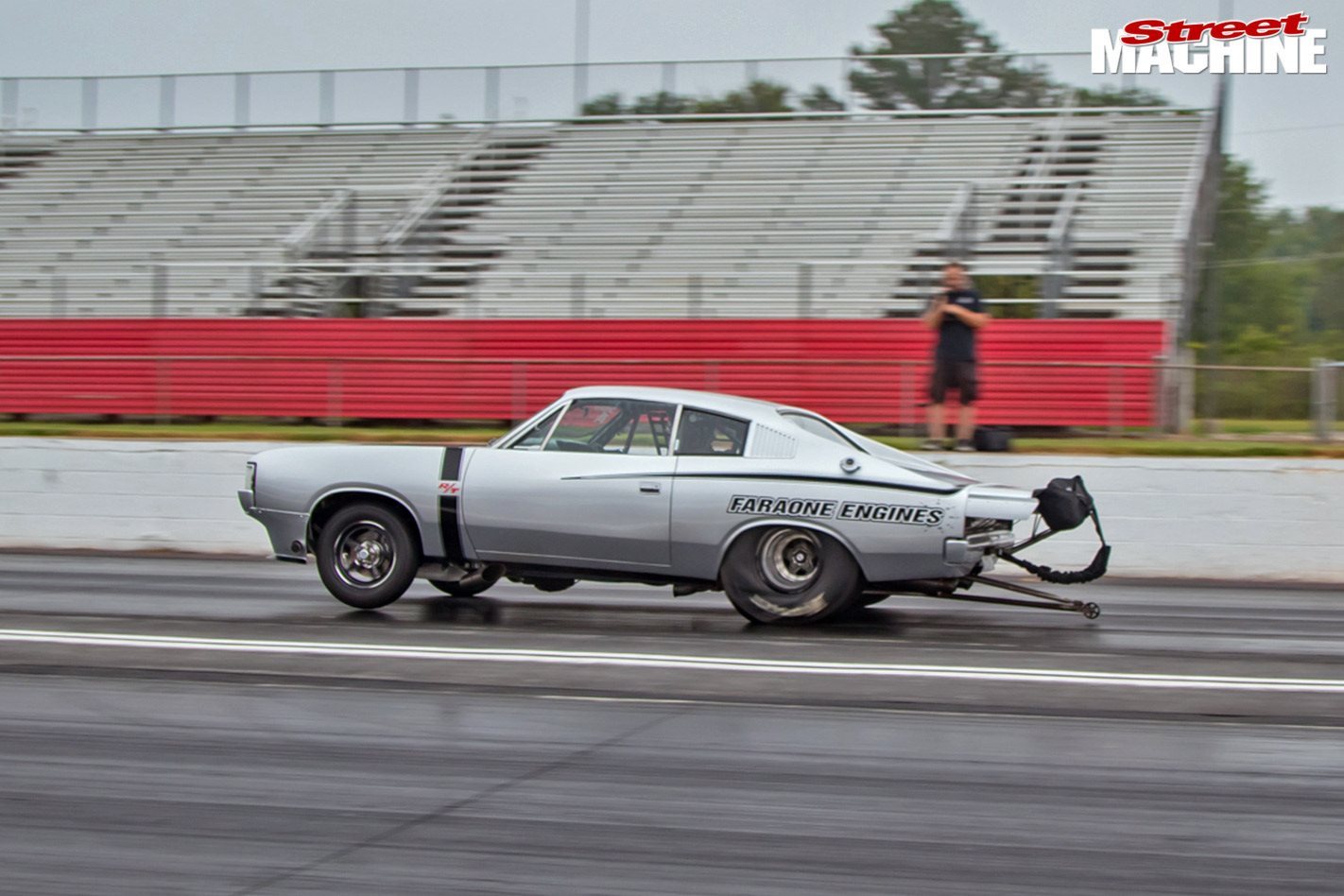 Will he be returning to the States for a third consecutive crack at Drag Week?

“Yeah, I’m definitely heading back. To be honest, a big part of why I do it is to prove people wrong. There has always been people making snide remarks on the Internet or doubting my claims, so building this car, taking it to America, driving it all week and racing it against the best guys in the world was a good way to put my money where my mouth is. Drag Week is the proving ground for legitimately fast street cars and it raises a lot of challenges.

“Because I built the car and I drive and maintain it at Drag Week, the thought of breaking down on some pitch black road in the middle of nowhere in America doesn’t bother me. Aside from the rear end, the cage, the paint, the transmission and some welding, I built the car at home in the shed. My mate Jason’s job was to wire up the stereo and the fridge and mix my Johnny Walkers, and he got pretty good at it by the end of the build!”

Since we ran this story back in Dec 2013, John has been back to Hot Rod Drag Week twice more (2014 and 2015), and even though the Charger was suffered mechanical gremlins both times, the Aussie Mopar has run as quick as 7.43@193mph. We’re sure he’ll be back for another crack next year. Wouldn’t that be awesome to see?