THE starter motor churns and the big Clevo bustles into life before settling into a melodious fast idle. I kick my heels so as not to drag dirt into the XB Falcon’s pristine interior and plant my arse in the seat, swing the long door shut, reach back for the seatbelt and begin grinning. 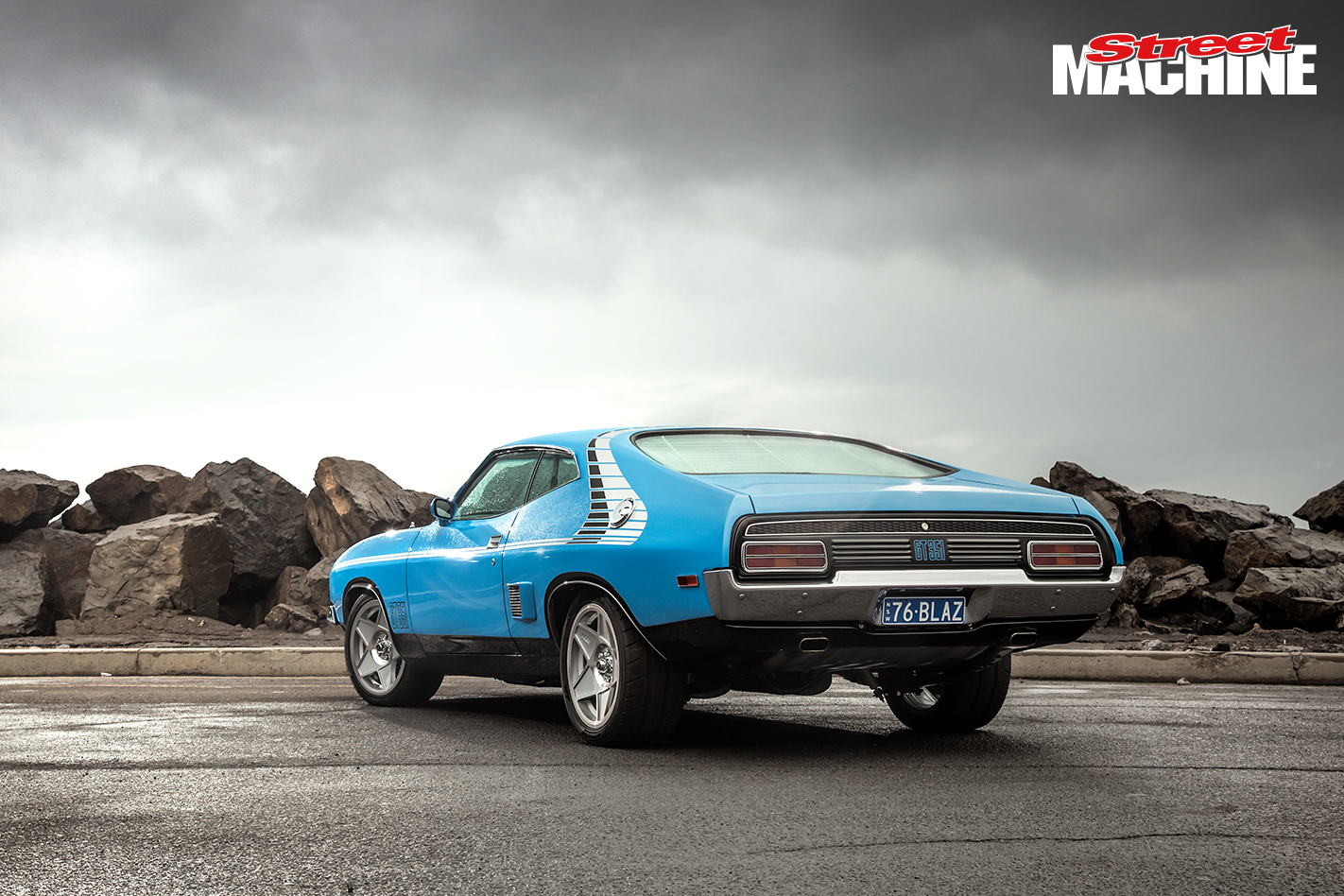 Darran spent years perfecting his XB, then couldn't drive it because it needed to stay squeeky clean for show appearances!

If I’m grinning, owner Darren Blackman is absolutely beaming. And he has good reason. He’s sitting in the car he’s always wanted – a car he’s spent the past however-many years busting his balls on – and now, after two of its three planned show appearances, he gets to drive it. 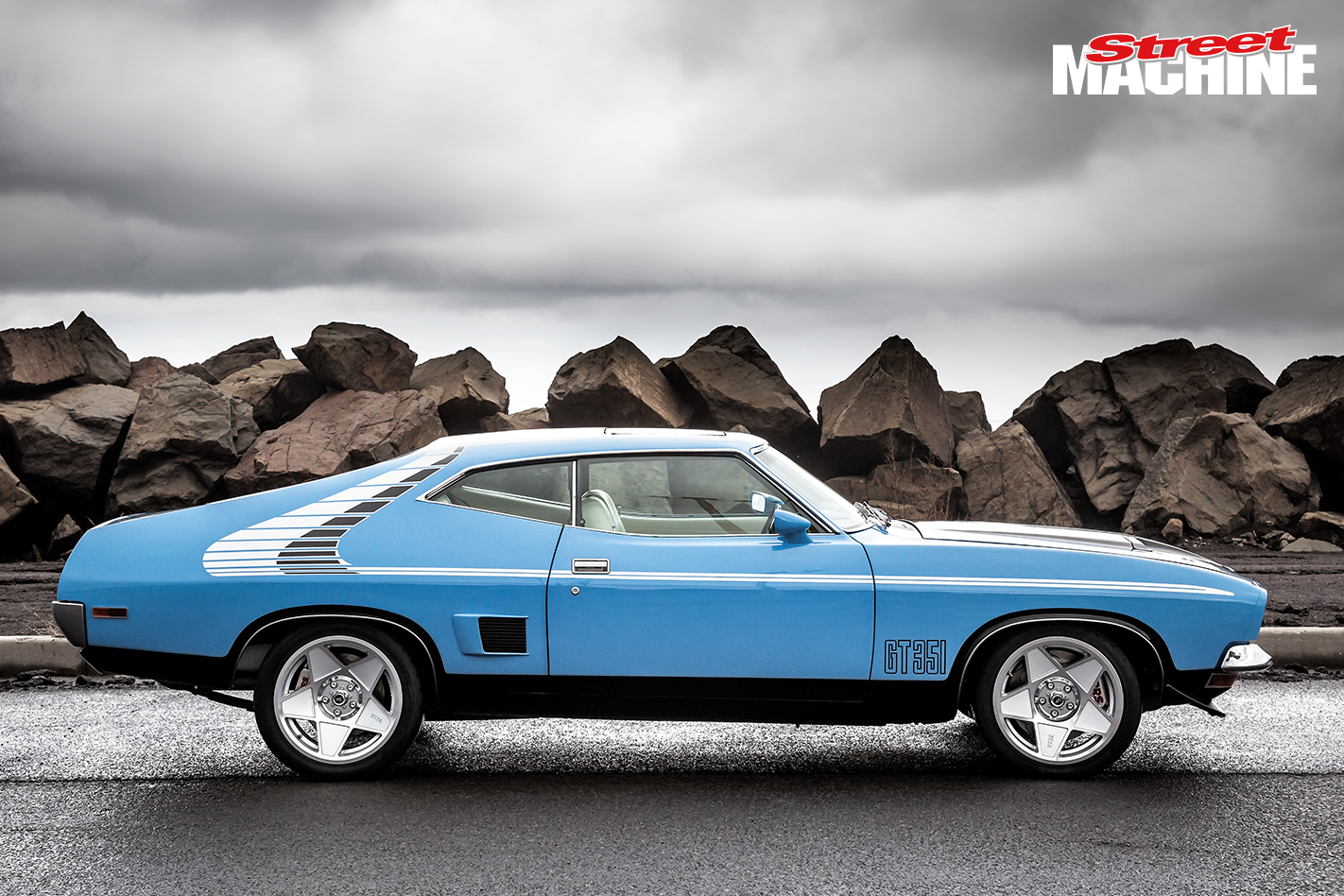 The car was built to drive, and now Darren finally gets to do that but everything still needs wearing in

Darren pulls the Falcon’s shifter back to first gear and gently burbles out onto the rural bitumen, so that snapper Wielecki can get some more pics. It instantly reminds me of the chase scenes of the original Mad Max – Max sliding the Interceptor’s T-bar into D to go chase the Night Rider. In a little twist to this scenario, Darren, like Max, was also an eager cop – he had to quit the force due to injury – and the heaving Cleveland his right foot is hovering over has around the magical 600 horses through the wheels, too. 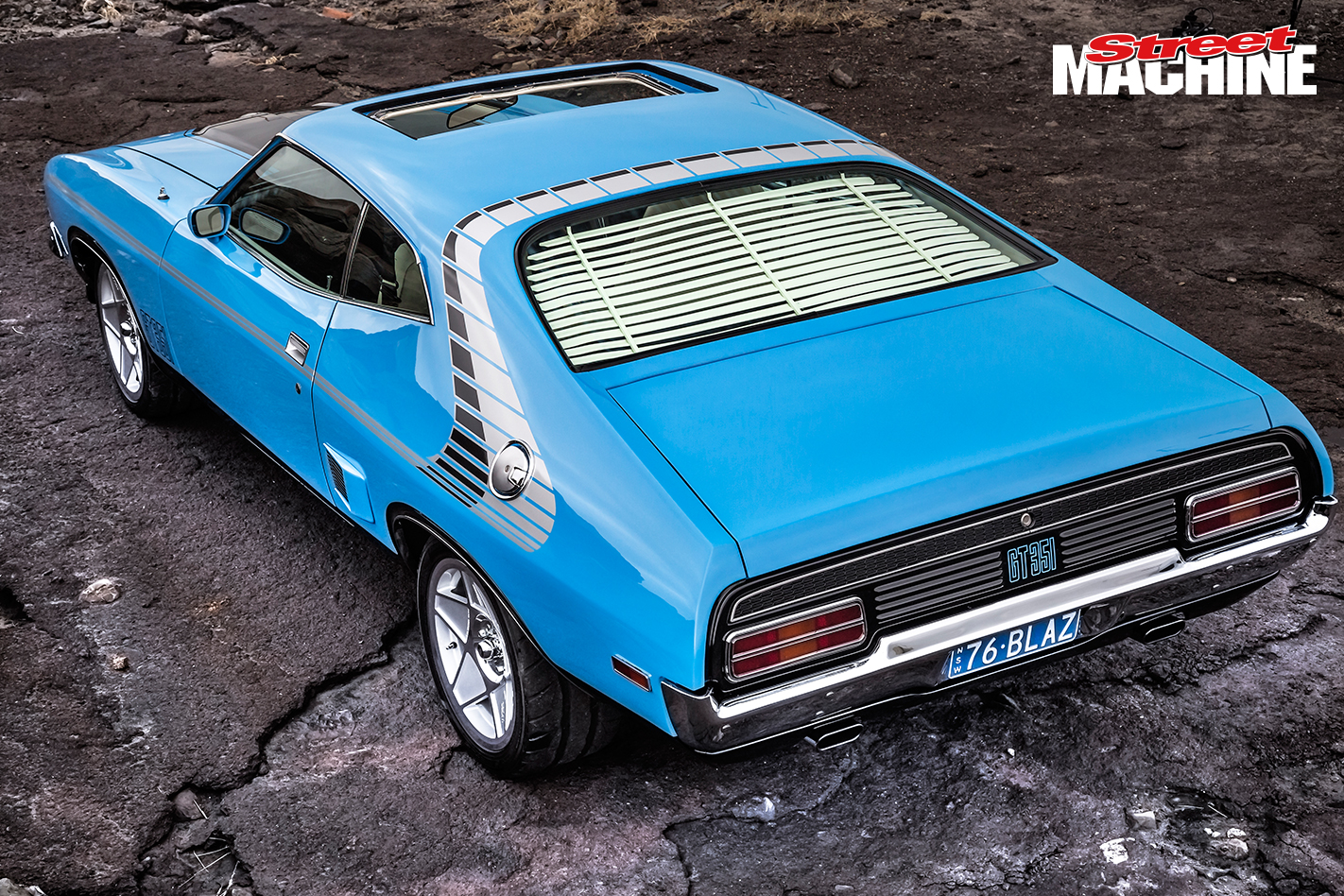 But today, there’s no tyre-frying like Max did. Not yet, anyway. That 420-cube engine out front of Darren’s GT is too fresh and new for that. Instead, he’s gently squeezing the pedal, almost instantly lifting the Falcon to the 80-kay speed limit on a massive wave of torque. He’s like kid with a new toy, a 40-something kid. “It feels real nice!” Darren says, as he flicks the manualised auto’s T-bar forward to 2. “Real nice. But then again, it should,” he chuckles. “Everything’s brand new!” 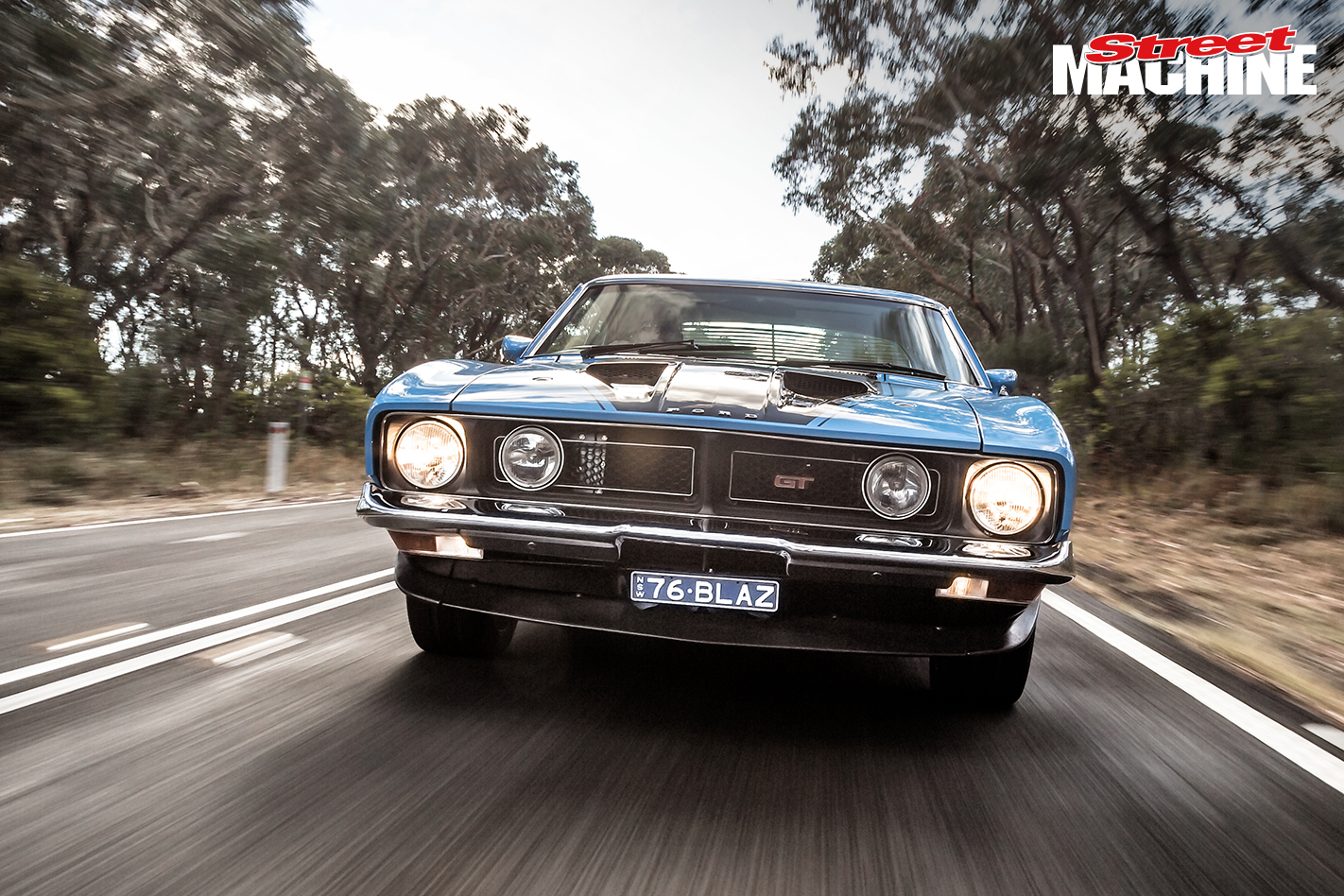 Darren's XB is one of just four ever built by Ford in Blaze Blue, after persisting with a seller for 18 months, Darren finally got the car but it had been repainted black

Darren has always had a thing for these big Fords. When he was just 19, he bought an XW GT; he still owns it. In a roundabout way, he met his missus Rebecca – obviously a patient and understanding girl! – through Fords; her father has an XY GT, so he’s married into the right blue bloodline. And he’s good mates with the well-respected car crafter Howard Astill, who has had a big hand in the restification of this Aussie classic. 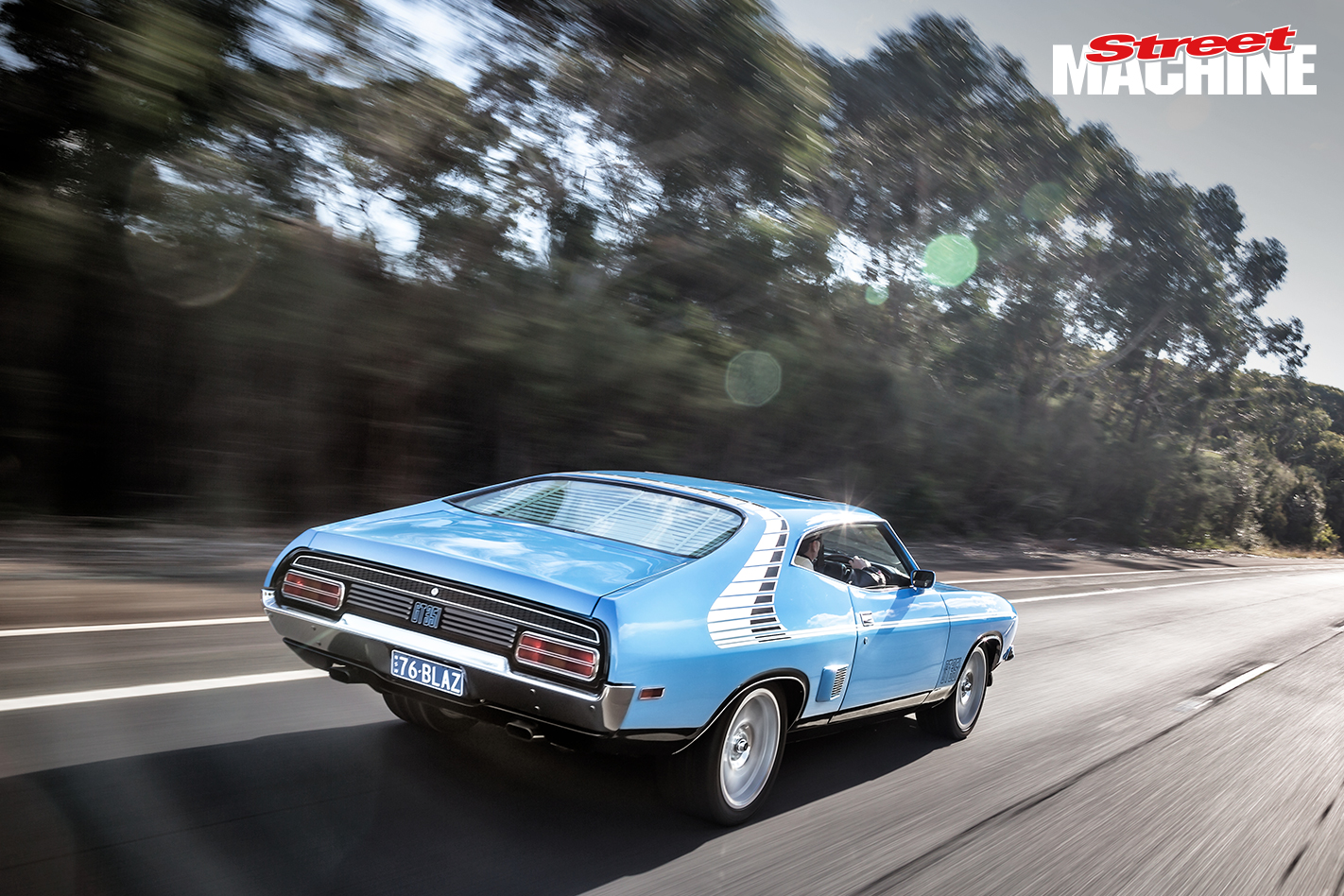 When Darren got the car it was also a rust bucket, but friend Howard Astill got the thing looking perfect

Like many of these classic hardtops that somehow survived the P-platers of the 1980s and being almost worthless for the decade after that, the XB was rusty when Darren got it: all around the rear wheelarches, the sills, the boot floor, around the rear window, some of the floorpan’s reinforcing braces, the bases of the A-pillars (and the tops of the A-pillars, too, in places that aren’t usually seen) and in the plenum. Carrying dozens of patches, it wasn’t a pretty sight. 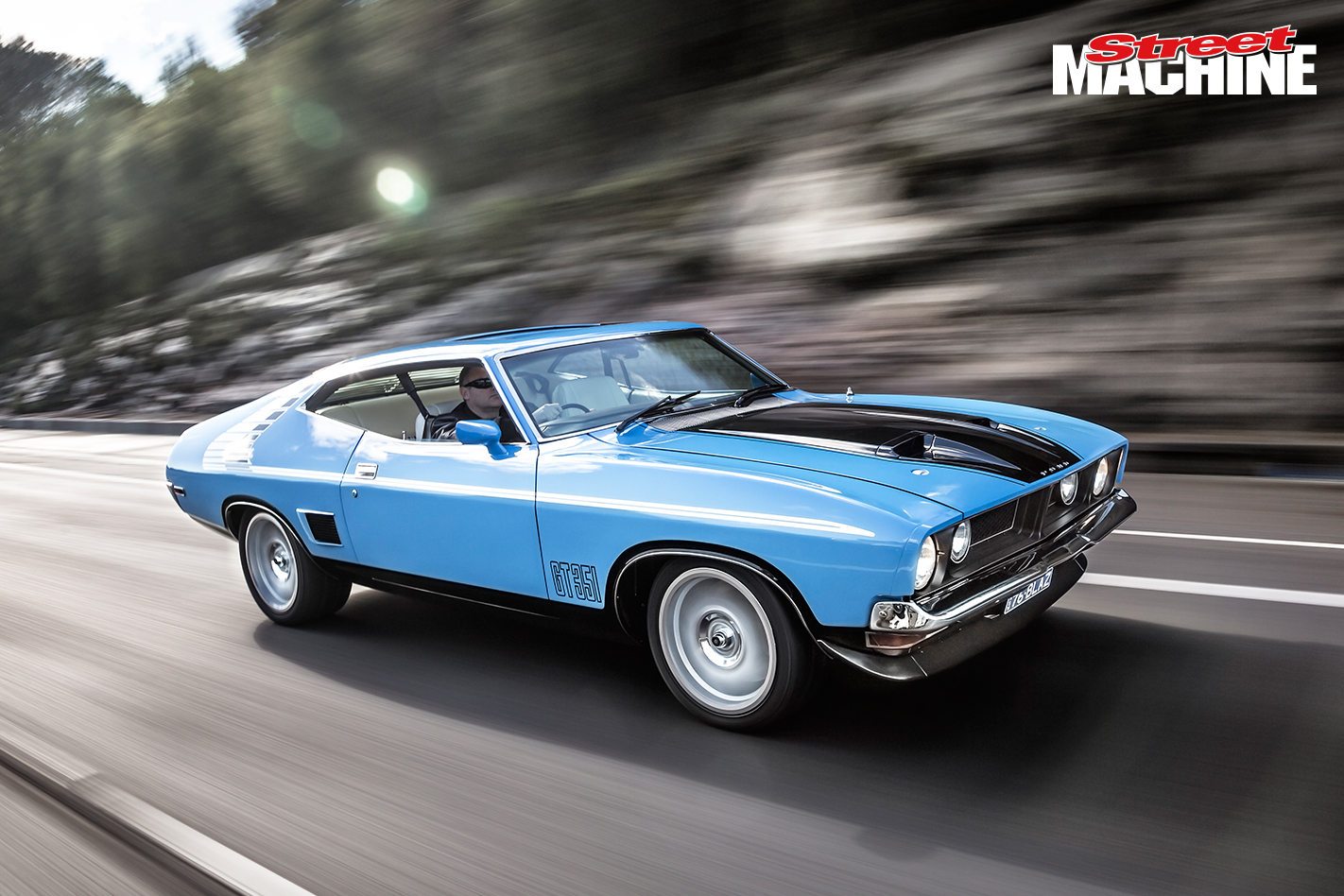 Darren, previously a tradesman now a NSW Police officer, and Howard completely remanufactured the shell with crazy attention to detail

But body man Howard’s intense and thorough build process – honed through previous high-calibre builds like his own Mustang and Rod Vandersee’s similarly themed Cool Mint Falcon hardtop (SM, Apr ’13) – was to disassemble the shell, section by section, spot-weld by spot-weld, and repair and replace any corroded areas, even the ones you can’t see. The roof skin came off, as did the long flanks of the hardtop’s lithe rear quarters. The doors were filleted; like the bonnet and boot lid, the outer panels were removed from their inner frames, allowing every crevice, corner and surface to be exposed for metal-magic rectification. Then everything was painted by Clinton Primrose (yes, even all those hidden inner areas that will never see the light of day again) and reassembled, with the final required spot-welds being individually touched up. 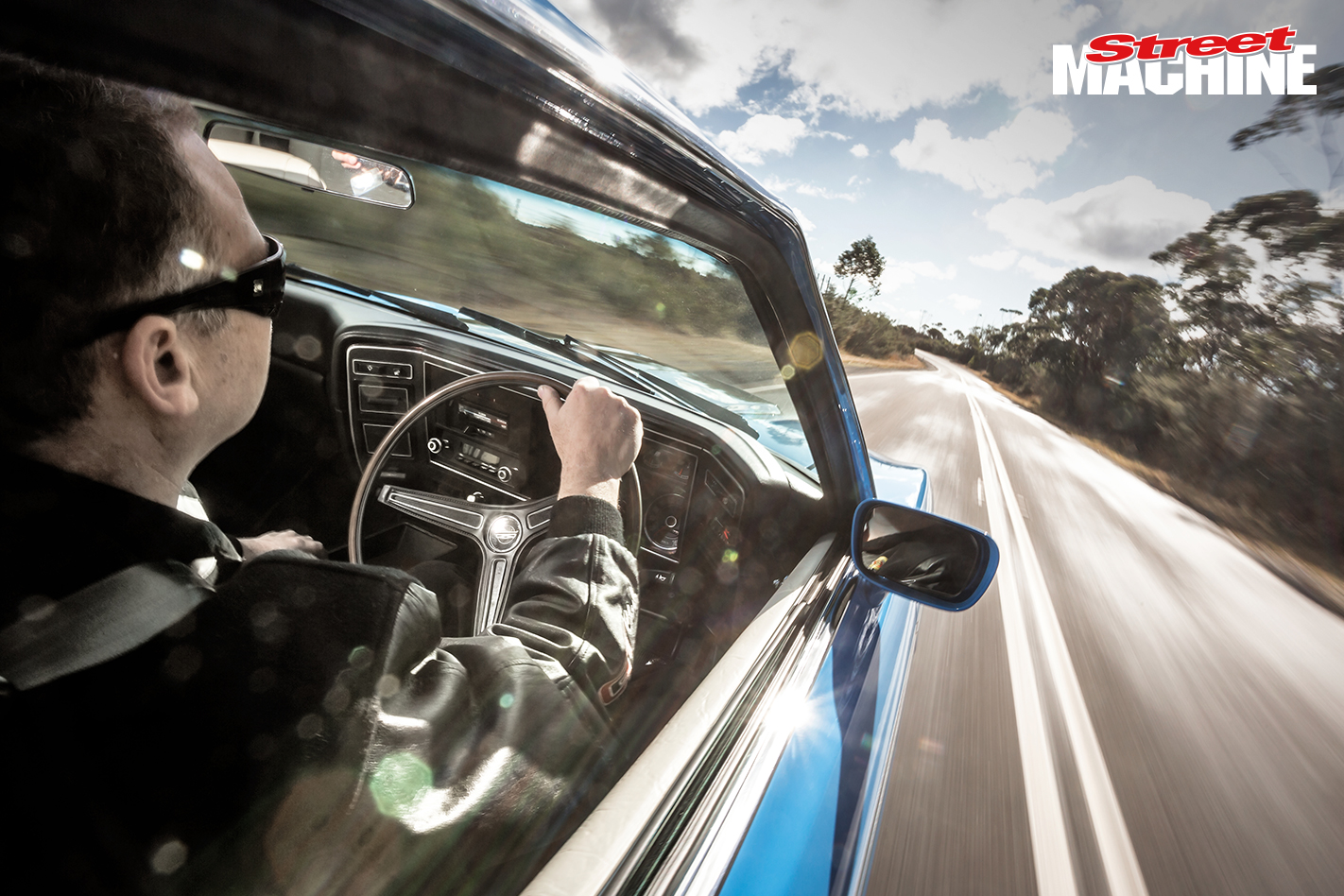 Darren, who was a tradesman engineer/fabricator before he joined the NSW Police, worked hard, shoulder to shoulder with Howard. It’s difficult to distil the jaw-dropping extent of the two men’s efforts here, but suffice to say it involved the almost total remanufacture of the shell. 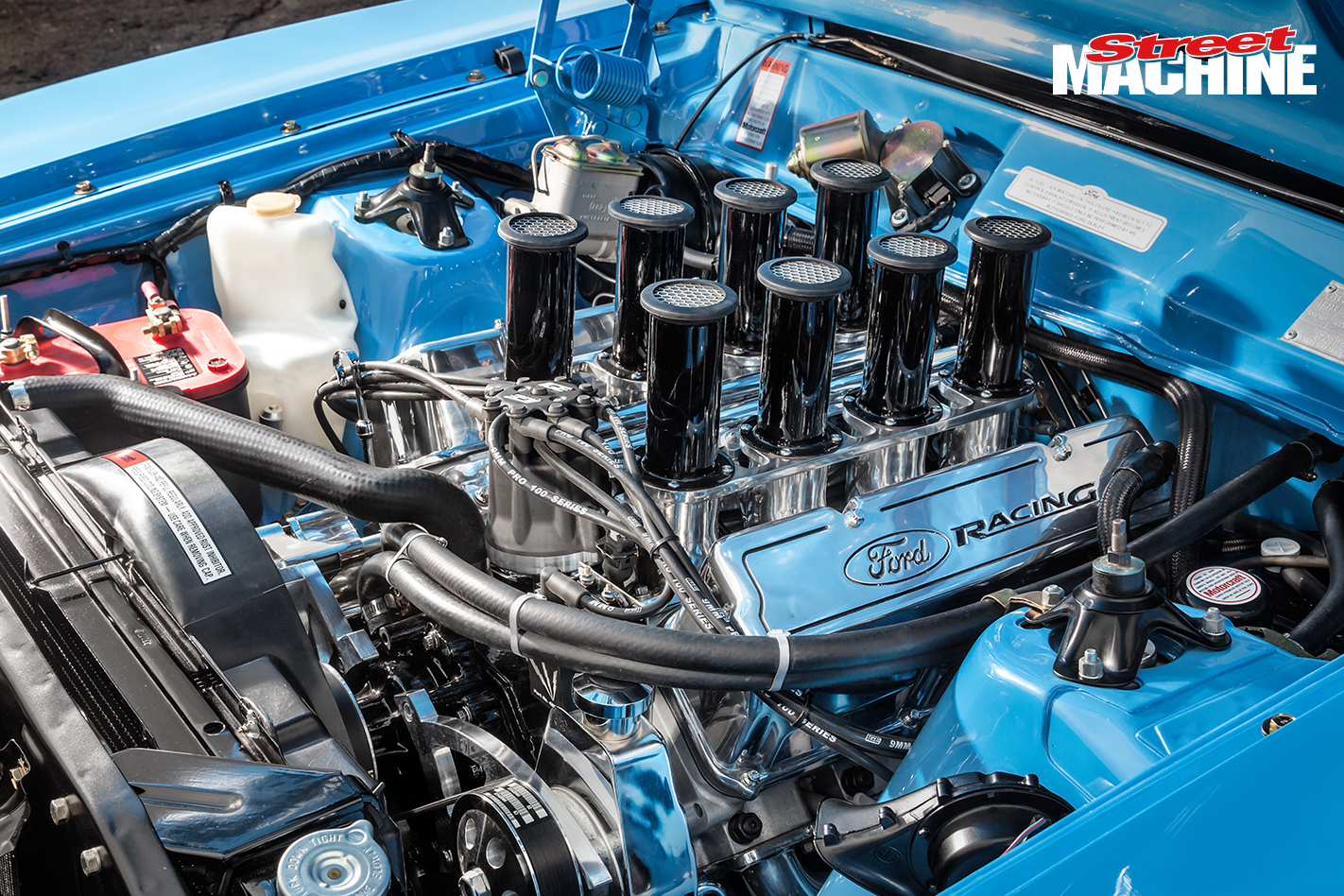 Under the bonnet is a 420-cube Cleveland built by Shane's Race Engines, good for around 600hp

The car’s original engine has been restored, but it’s not in the car. Instead, an Arrow-blocked 420ci Cleveland pumps up front. Built by Shane’s Race Engines, the mill’s magic begins with a set of Hilborn injector stacks converted from their original mech-spec to EFI. Only a few gentle hours and a few dozen kilometres old when we went for a blat – and operating on a run-in tune – the engine is built to run on pump premium. “It’s loosening up as I drive it,” Darren says. “It’s not a car for Sydney traffic, but I wanted full rego on it so I can drive it whenever I want.” Good idea. 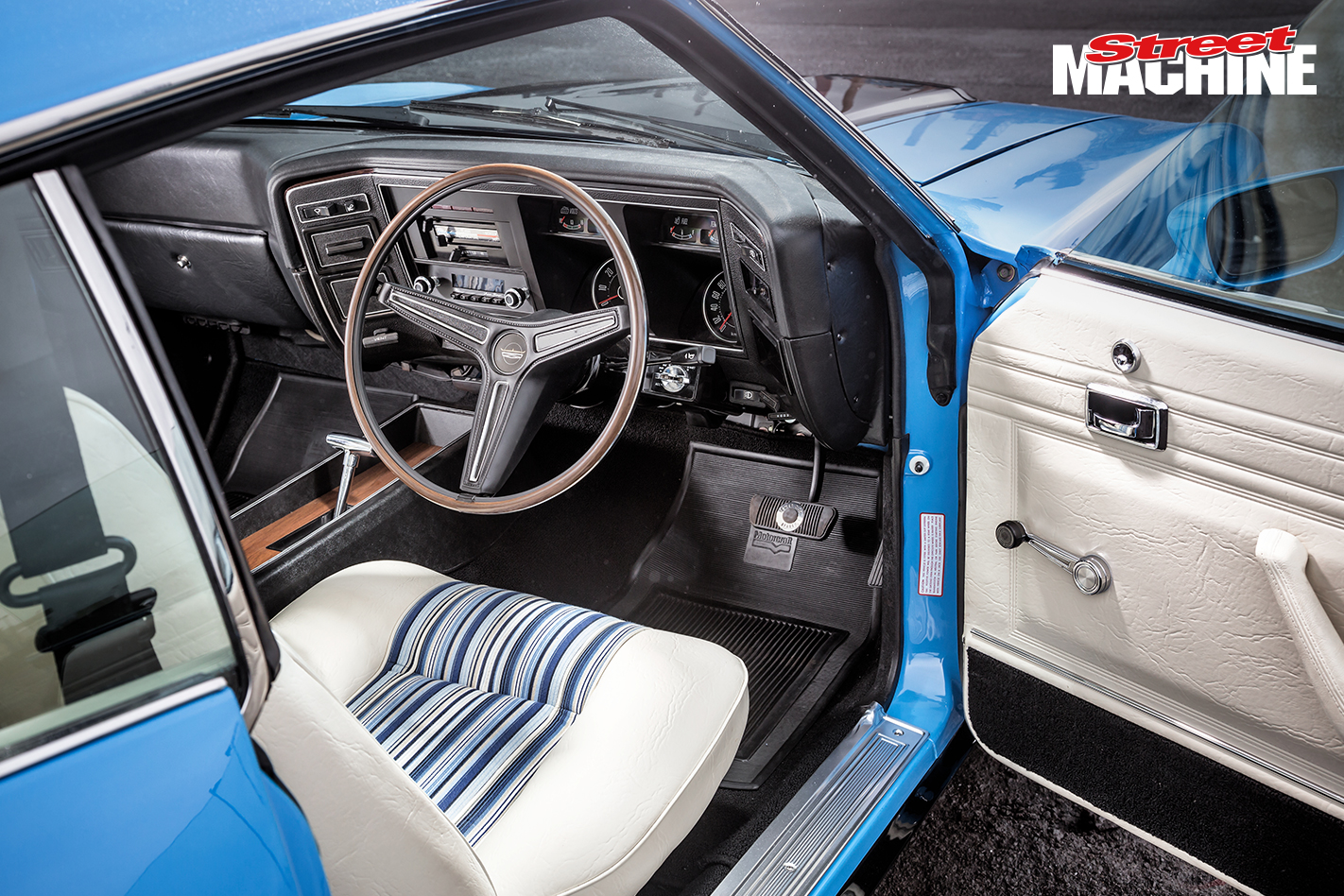 The trans is a manualised C4 with the internals built by Matt Kay to cope with the power. Behind it lies a nine-inch diff with 3.5s and a Strange alloy centre, built by Wollongong Automotive Services. The driveline is surrounded by exemplary fit and finish – the floor is standard (thanks to plenty of work restoring it), right down to the imprints of the factory spot-welds, but has been detailed in carefully applied stoneguard. 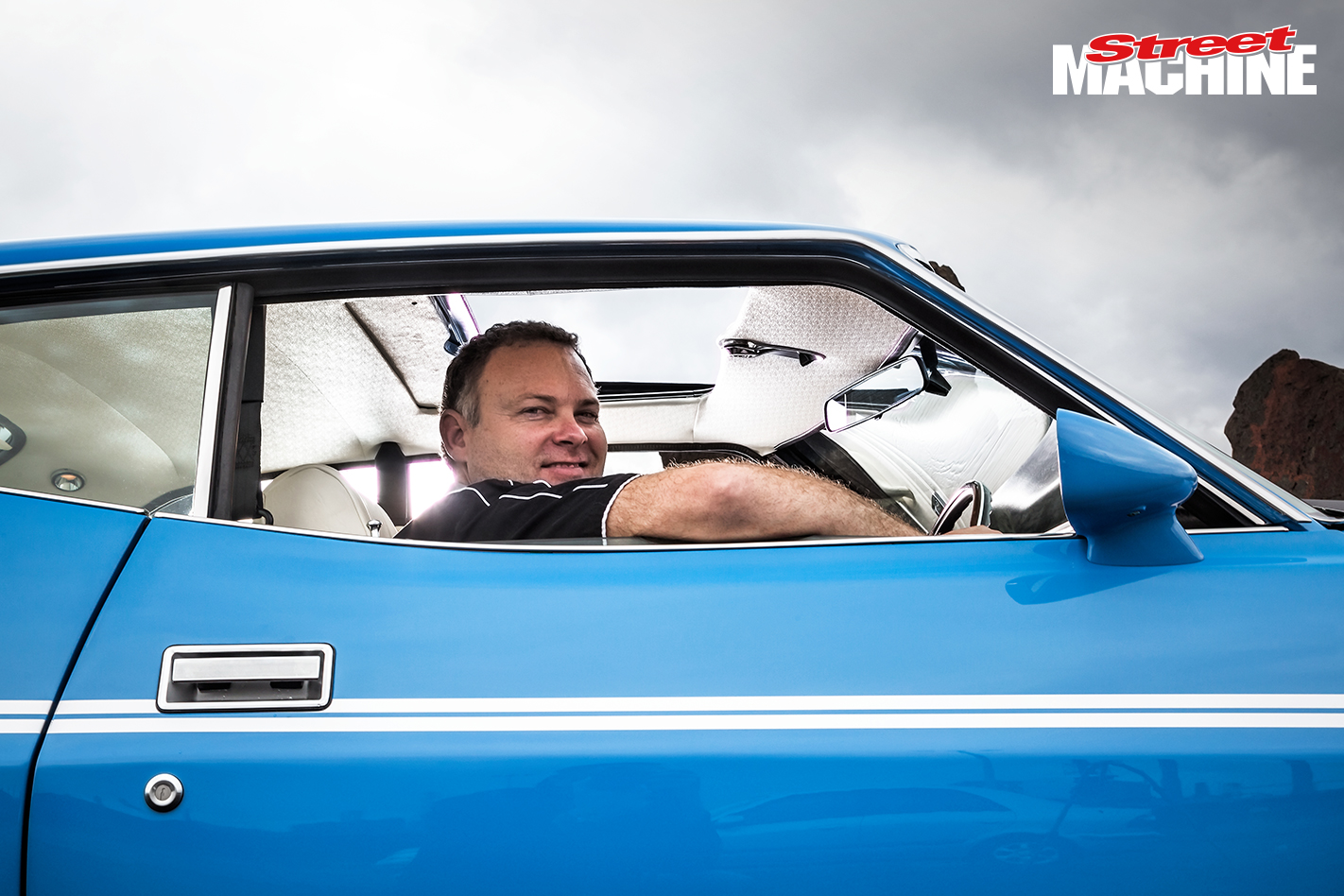 The twirl and turn departments have been upgraded with an RRS power rack-and-pinion steering system and front strut conversion. Both bolt-on, the benefits to performance are obvious compared to the Falcon’s archaic original tech. The brakes, too, are RRS: four-piston calipers over V8 Supercars-like 350mm vented rotors up front and two-potters/330s down the back.

With the work complete and its show days done – Sydney MotorEx in July was its final commitment – Darren is looking forward to sliding his glorious GT Falcon’s shifter into gear and squeezing that right pedal for a long time yet. 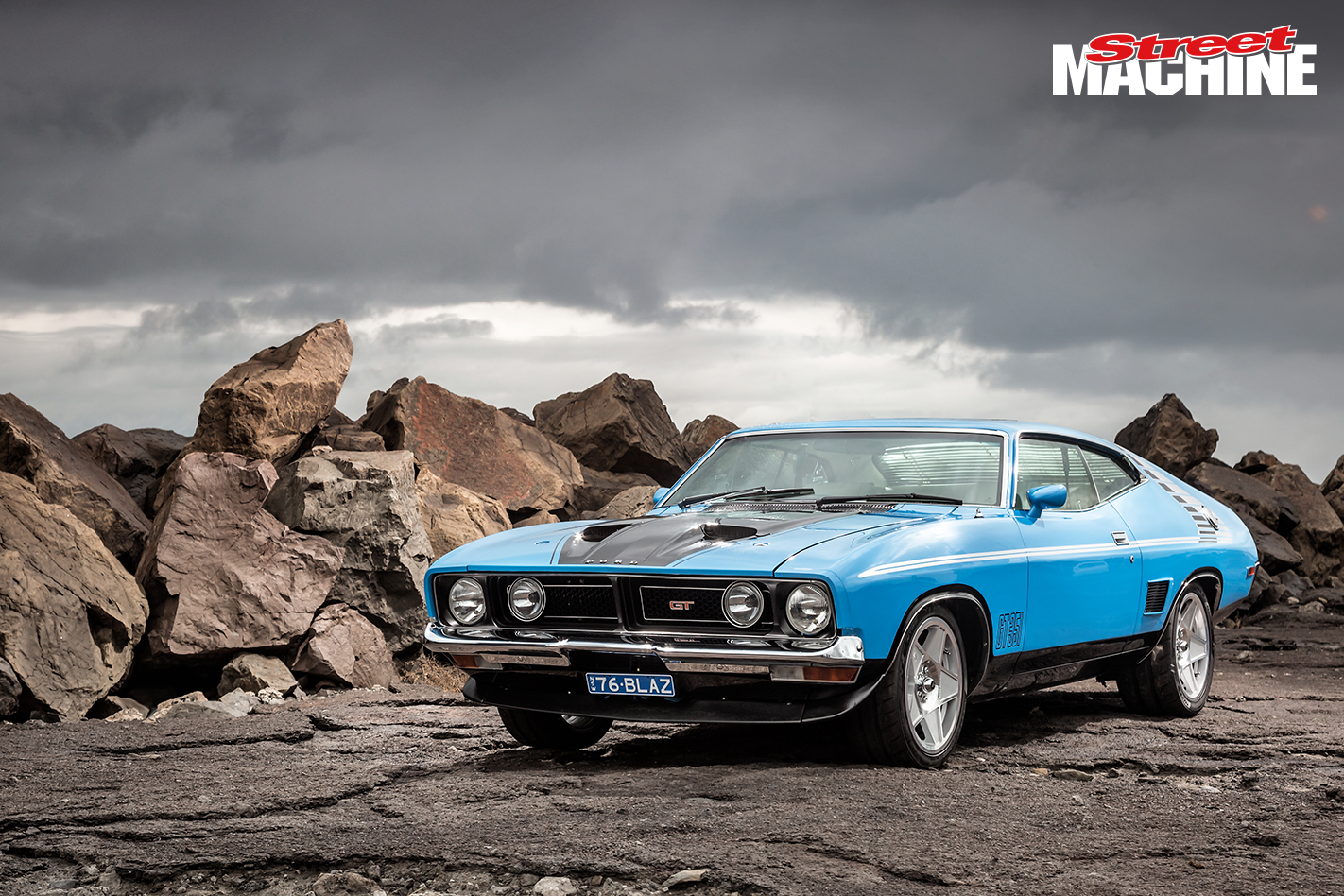 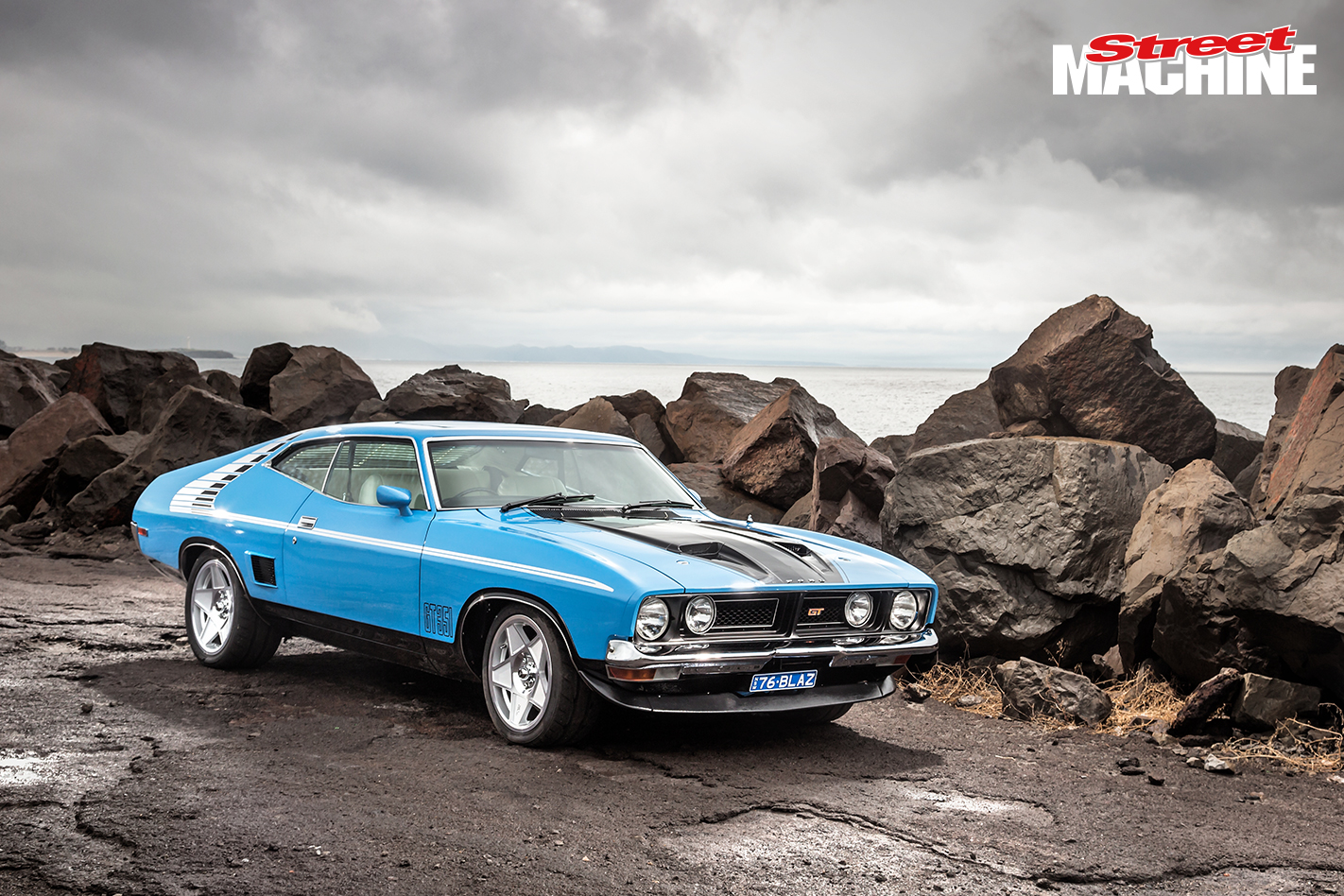 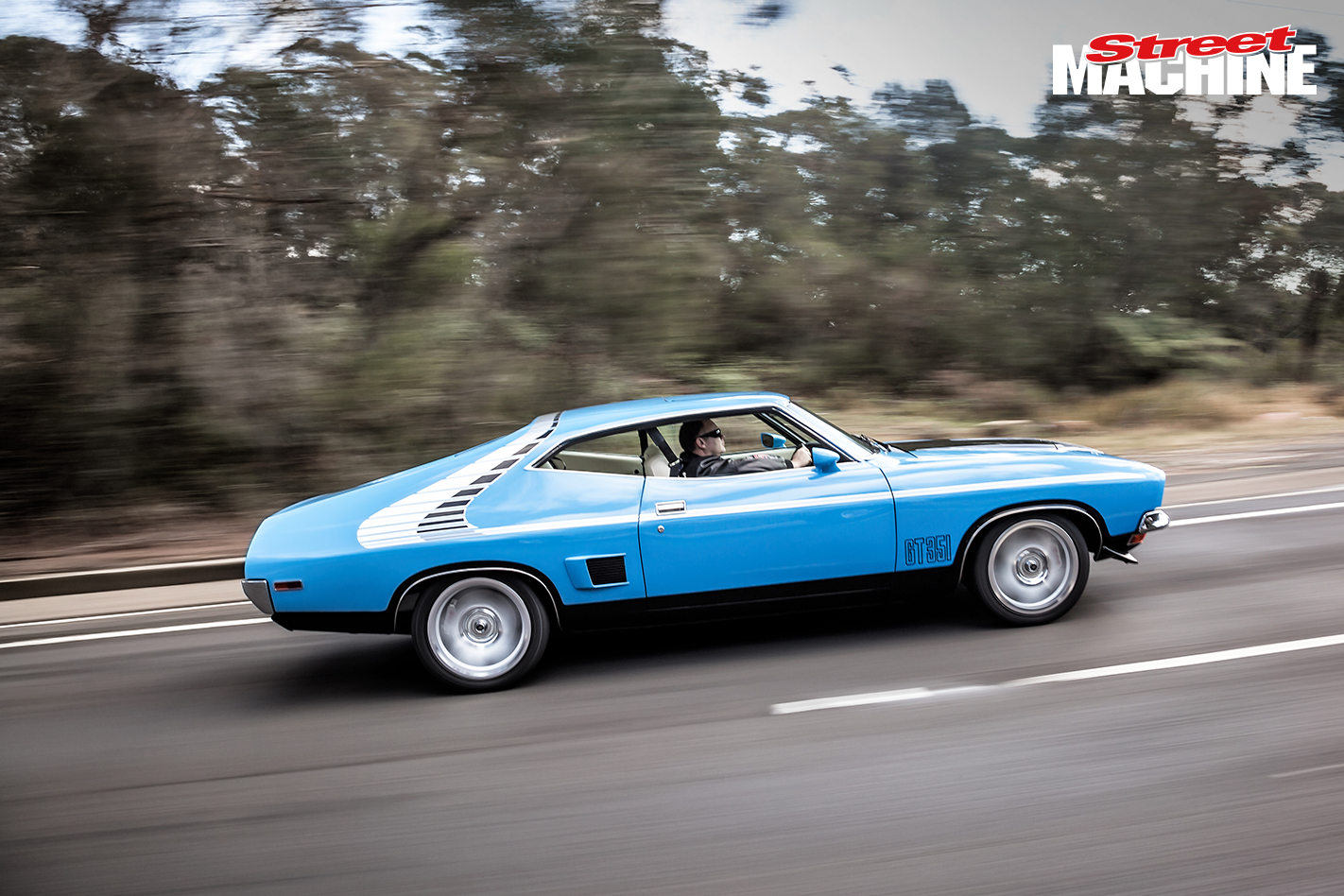 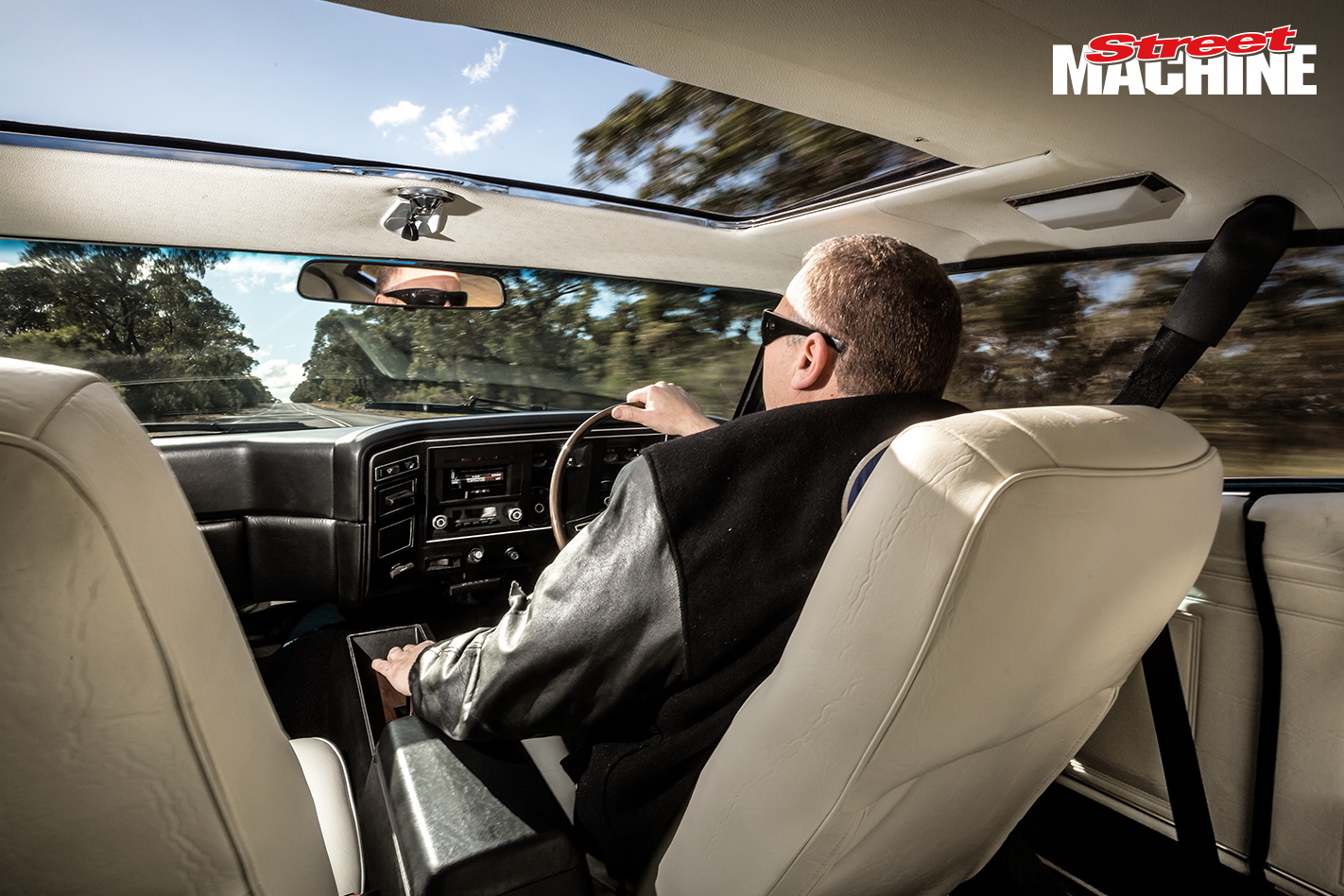 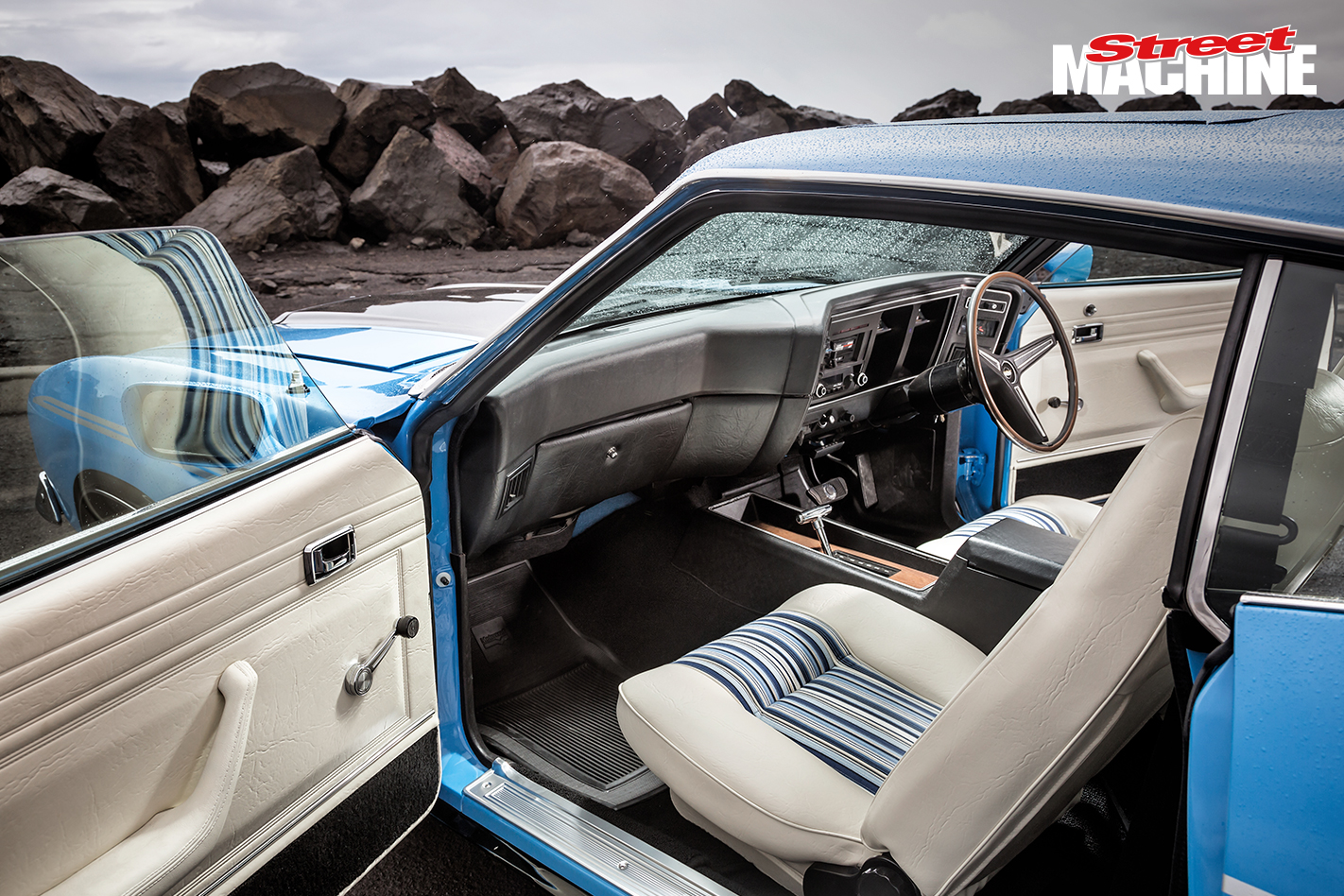 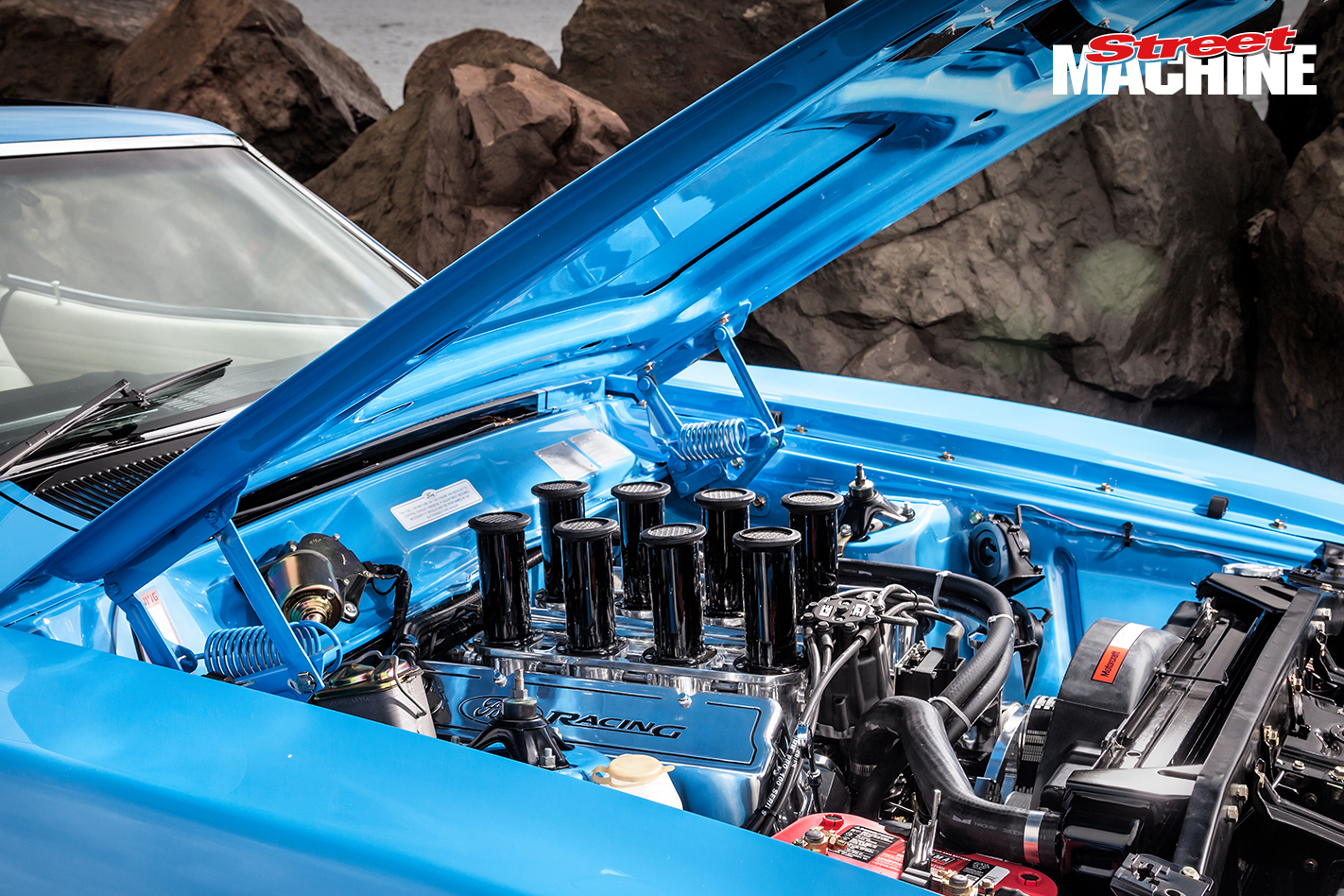 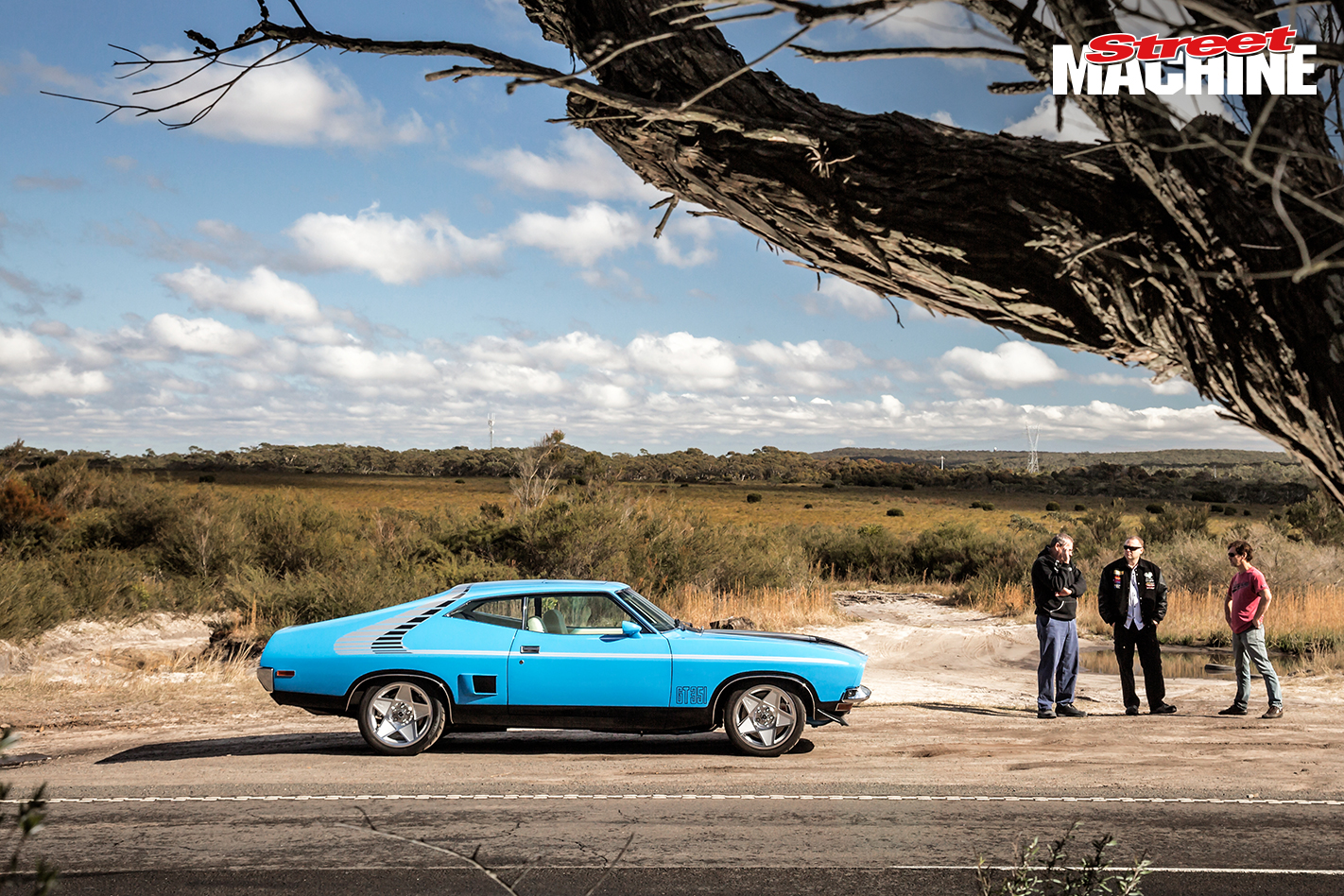 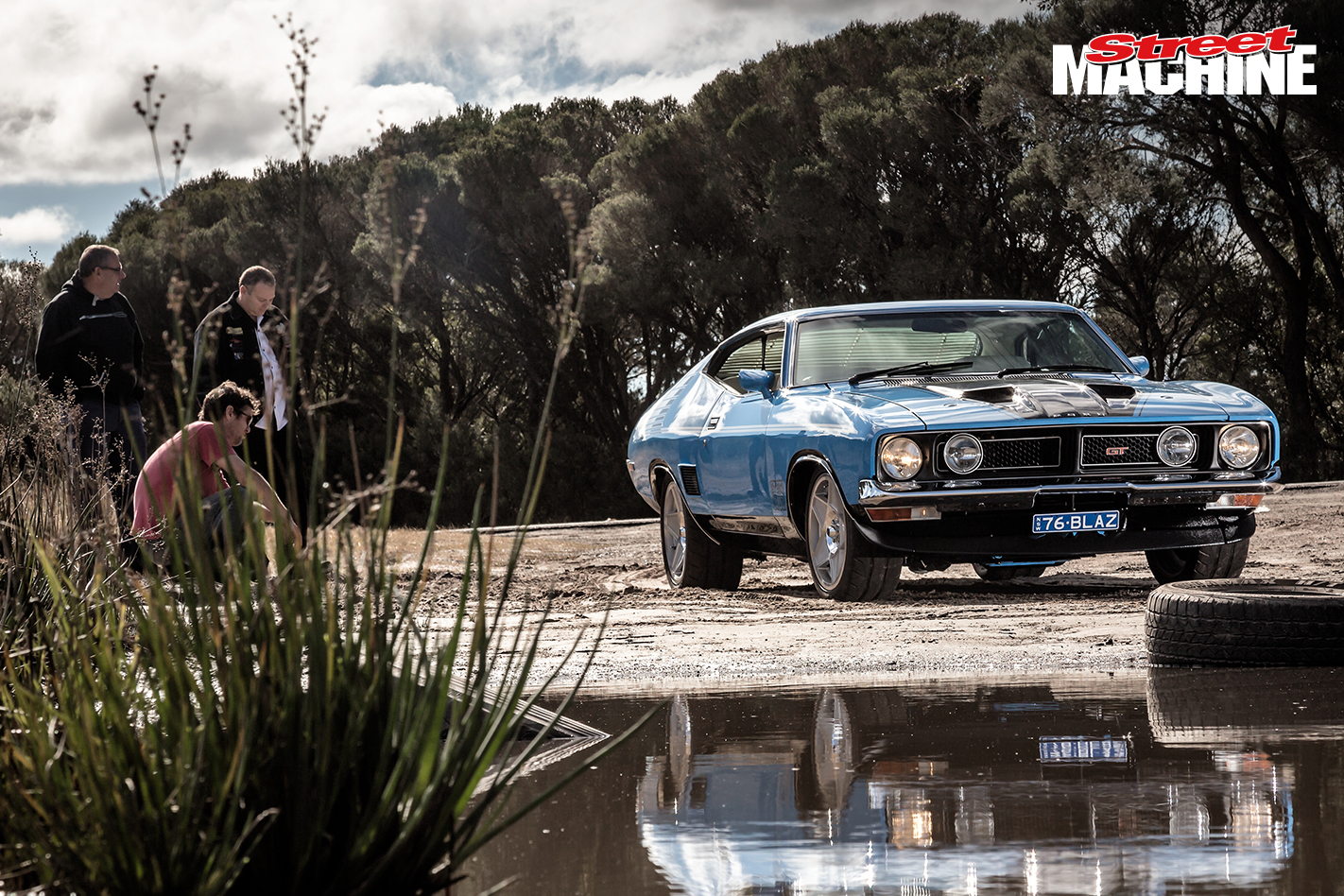 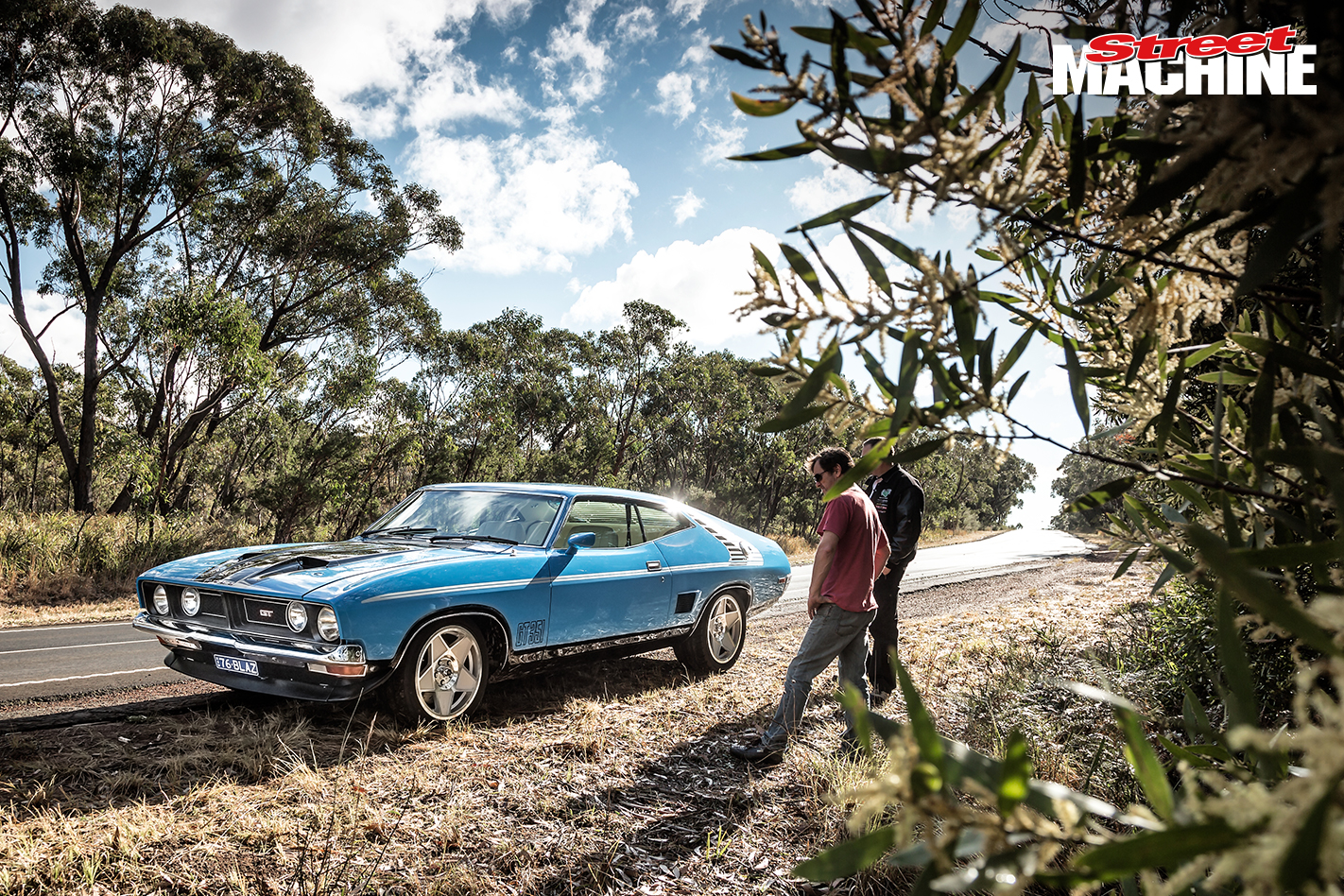 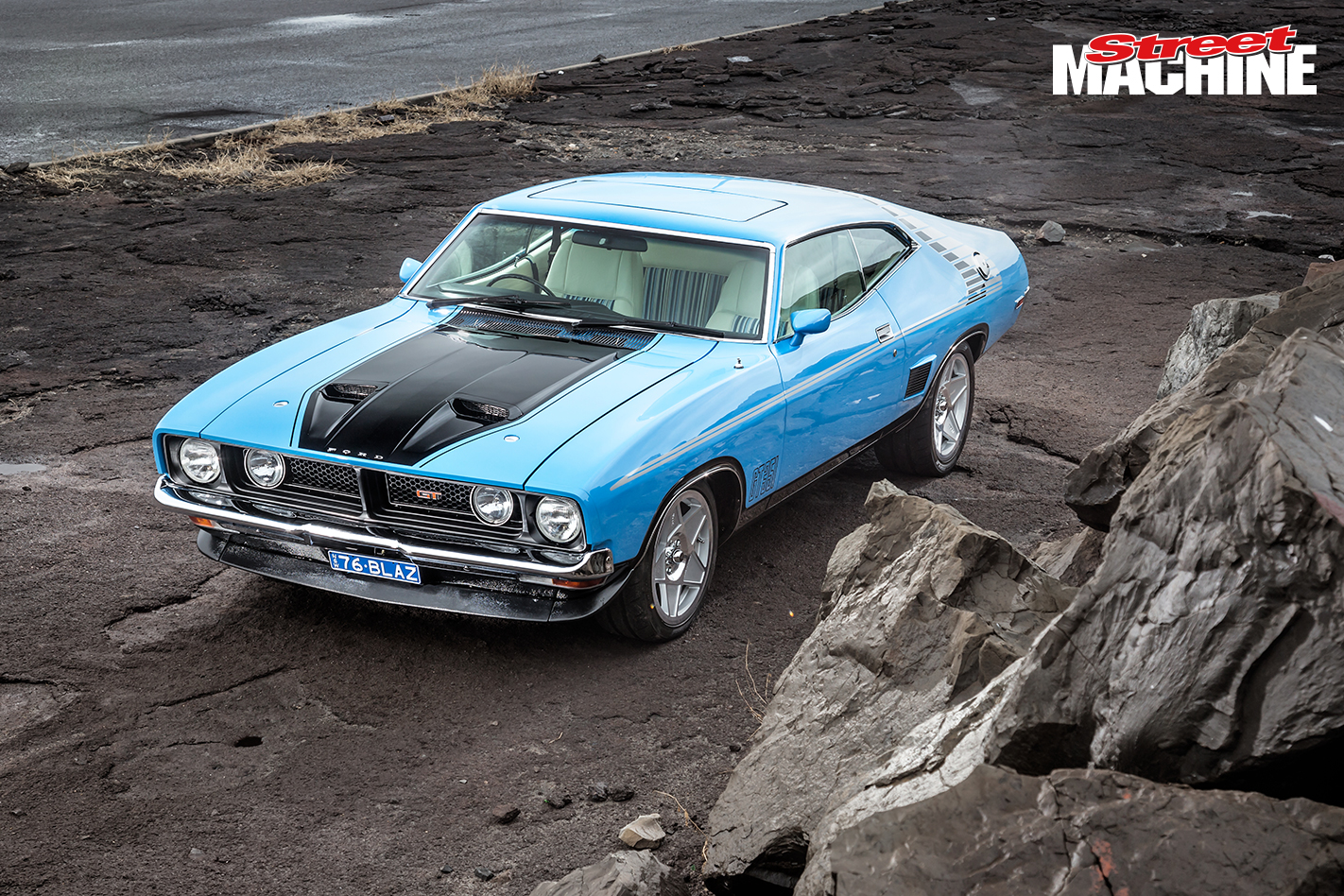