THERE are chequebook cars and then there are home-built gems like Gary Scicluna’s 1978 Ford Escort panel van, which he has owned since 1986 and transformed, almost by accident, into an elite Summernats Top 20 show car. Gary did almost all of the build on his own in a suburban double garage, for a total cost of – wait for it – just $26,000.

Gary’s attraction to the panel van scene began after reading a story on a Corolla van called Spirit Of Time in an early-80s issue of Custom Vans & Trucks. So, he bought this Escort in almost-excellent condition – it had a few shopping trolley dings. “It was only eight years old at the time,” he says. 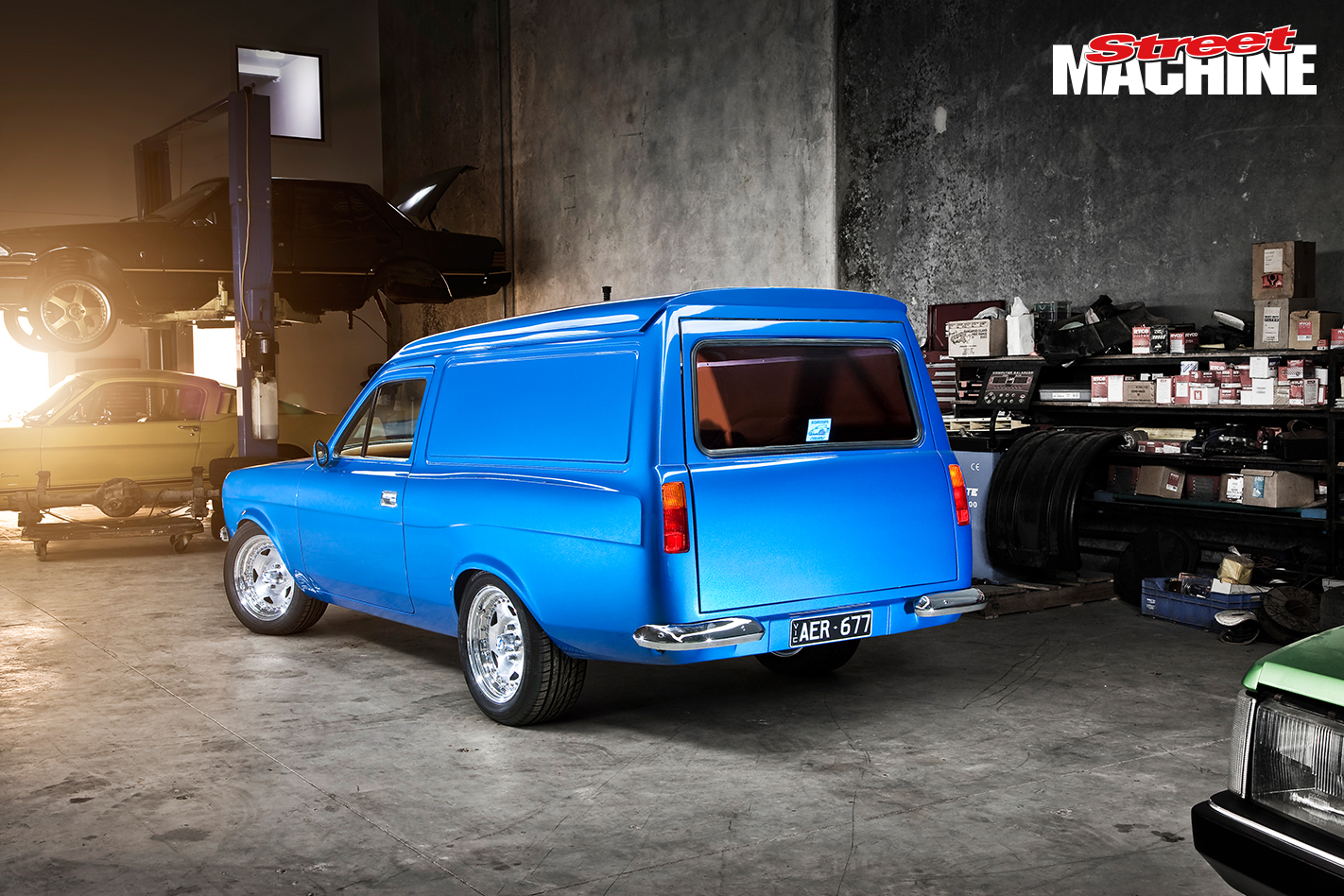 A former panel beater, Gary did most of the body work himself but kept alterations to a minimum to keep a clean look

In 1995, he began stripping down the shell for a respray. He followed this with work on the undercarriage, and he then converted the twin rear barn doors to a single lift-up design. He named it Skid Row, after the American hair metal band, and drove it to the 1998 National Panel Van Titles in Wodonga, where he won Top Small Van and secured fourth place overall.

Fast-forward to June 2011, and with Summernats 25 on the horizon, Gary decided to repaint the engine bay and tidy up the undercarriage again. This time he didn’t especially like what he saw underneath. So, one thing led to another and the project ballooned out to 18 months. This is the result. “It was never meant to be an elite car,” Gary says. “It just happened that way.” 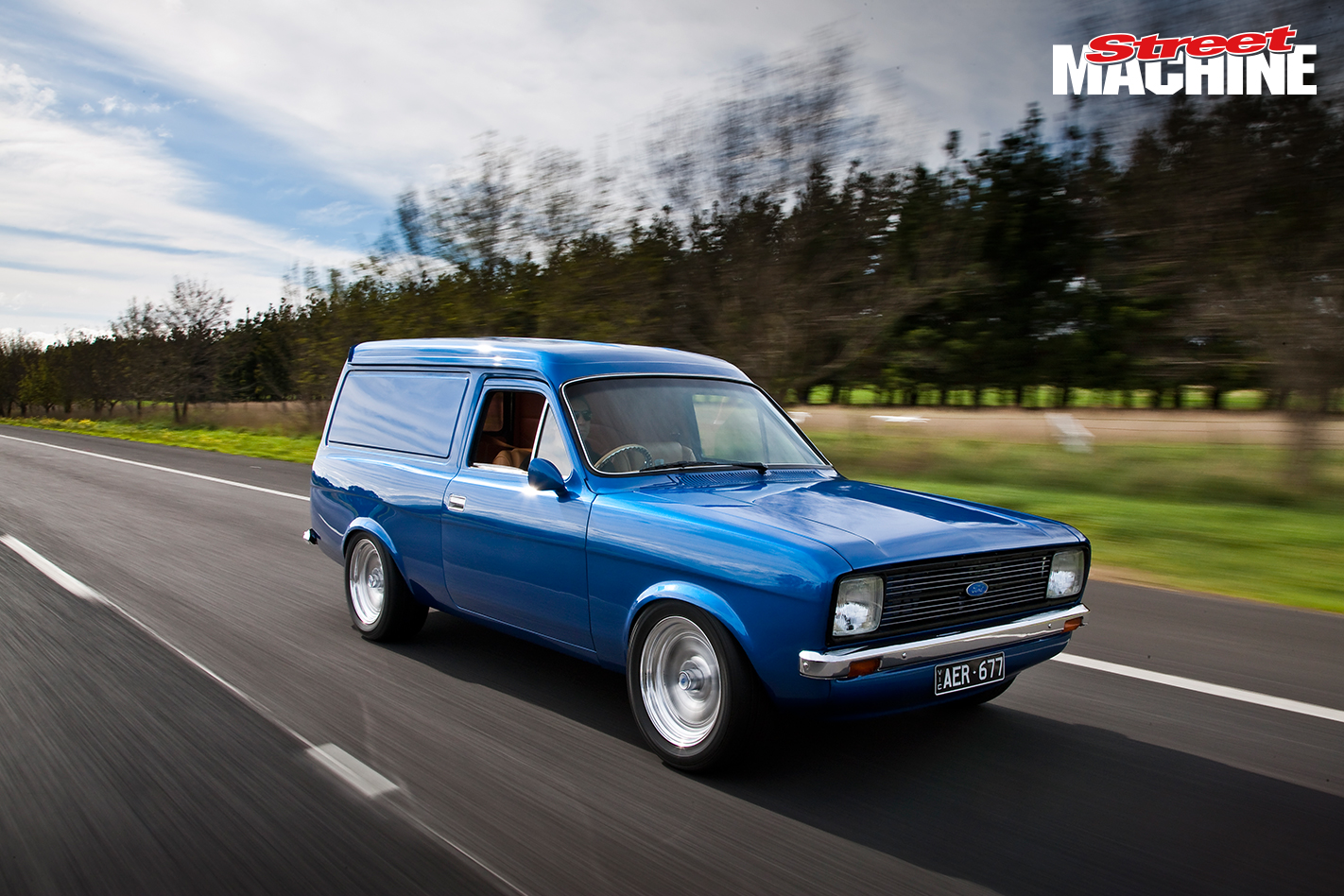 Door locks and the fuel filler have both been shaved, XC door handles fitted and the roof vent removed and smoothed

An integral rule of budget car-building is to do it yourself. A former panel beater, Gary did the extensive bodywork himself, enlisting the aid of a mate only when he needed an extra pair of arms. “It only left the garage to get sand-blasted, painted and trimmed,” he says.

The van looks stock but is anything but, particularly underneath. “I drove it to Shepparton for the Spring Car Nationals in 1998, and it bucketed down all the way. It ruined the undercarriage. That’s why I went for the mono-leaf springs and the smooth look on the current build, to make it easy to clean if it happens again. 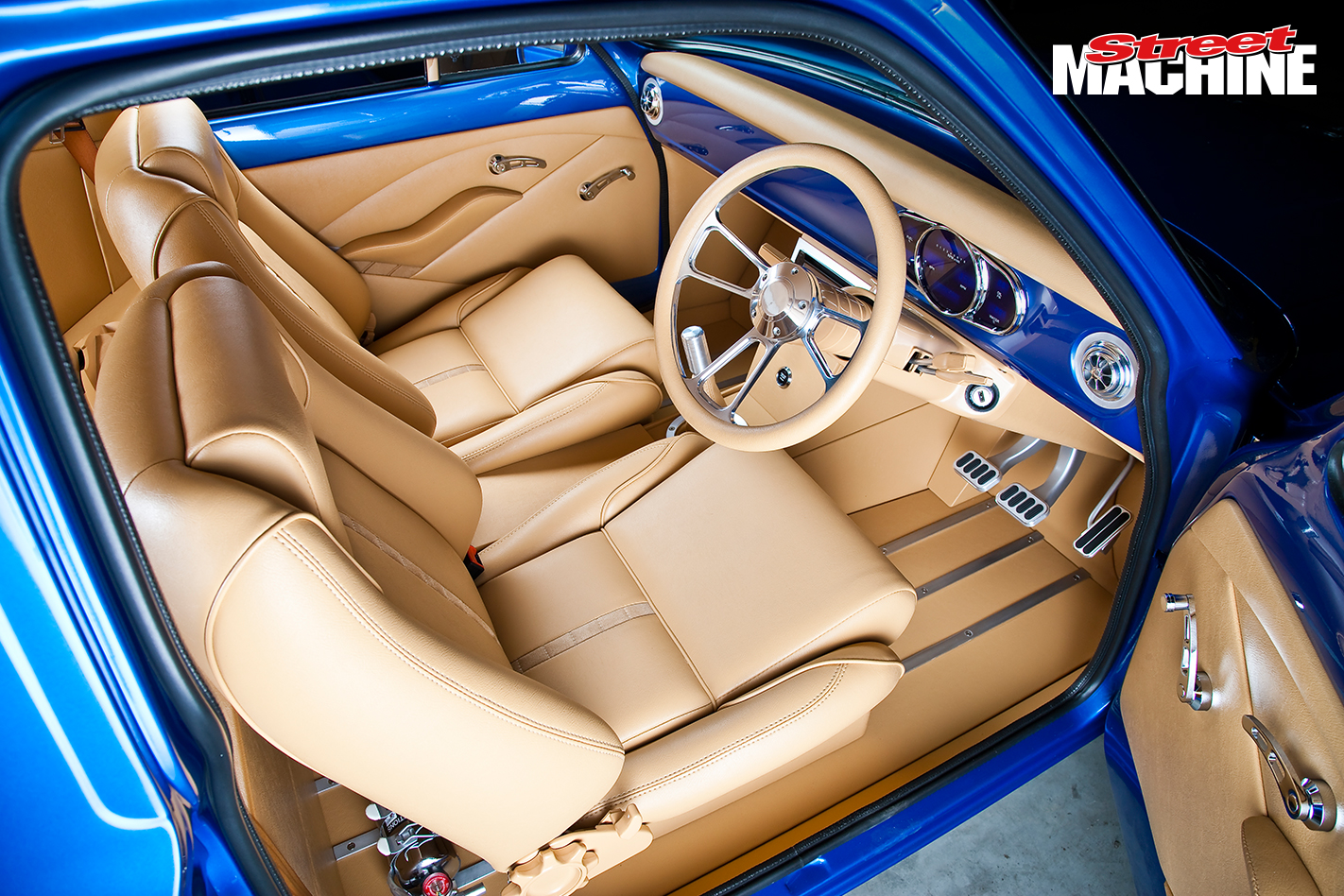 A Dakota digital dash and Lokar pedal set blend with the headless RS2000 seats, which are trimmed in English vinyl

“I started from the back and worked forward, welding panels into all the voids between the quarters and chassis rails, then from the inners of both rails to where the new fuel tank would be fitted.”

Gaps between the rails and rear-wheel tubs were also filled. The outer sill was sheeted to the outside edge of the rail to provide a seamless flow right through to the front wheel arch. Upper body mods are more subtle; the rear guards were pumped, the locks shaved and the roof vent smoothed. 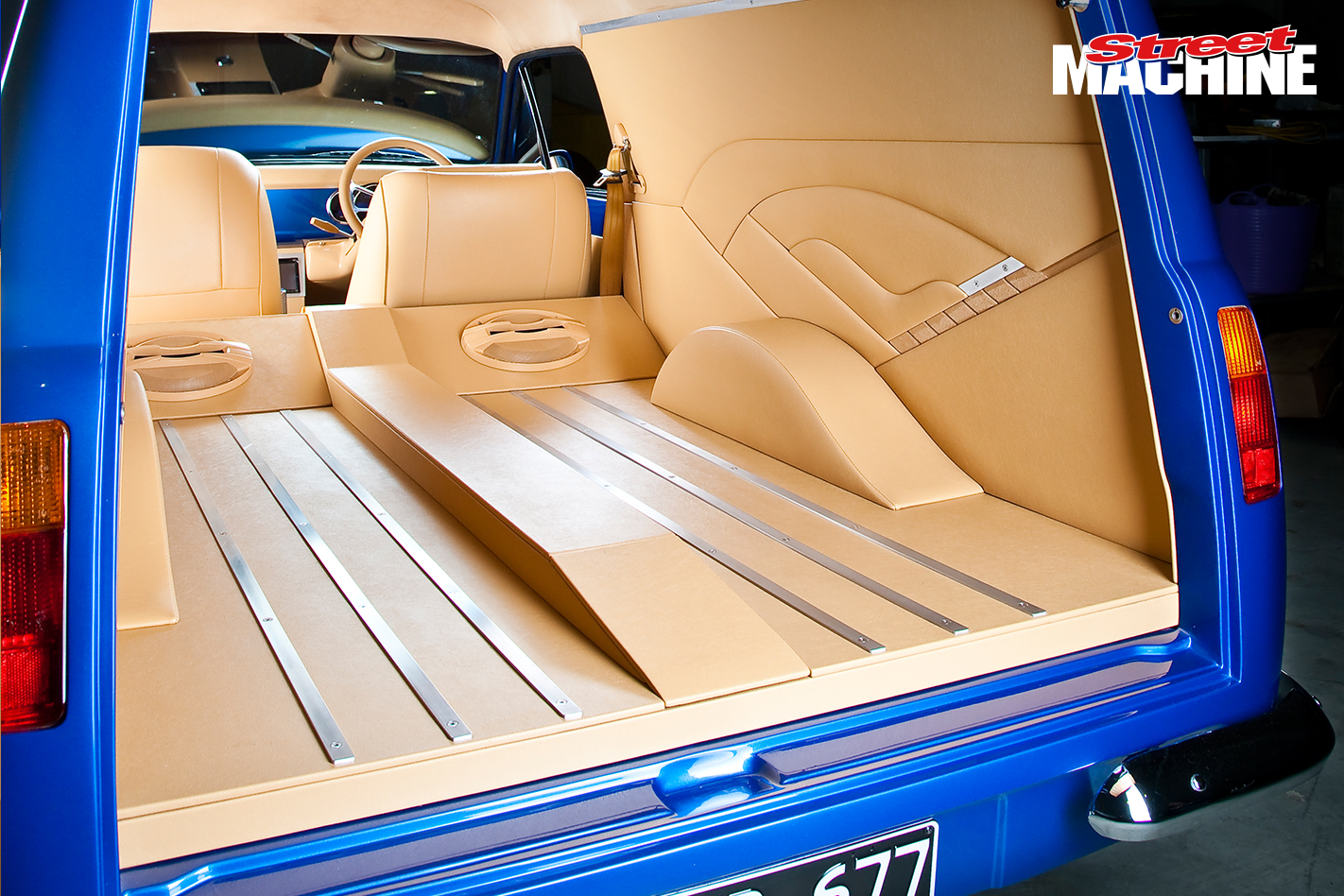 The theme contines into the luggage area, where Gary made unique floor and side panel designs

The next step was the running gear, which brings us to another invaluable rule of building affordable cars: Avoid costly aftermarket parts and do the best with what you have. The brakes are a case-in-point, a mixture of highly detailed but inexpensive Volvo, Camry and Laser parts – the only bling being the Wilwood master cylinder in the engine bay.

The diff is stock, but mounted on both mono-leaf and coil springs and steadied by a V8 Supercar-style Watt’s link. The front end is also largely standard, apart from the front Capri struts with Koni dampers and custom-made springs, all of which is adjustable for caster and camber as well as ride height. This permits a low stance over the 15x6 Convo Pros without needing to flare the guards or fit airbags. 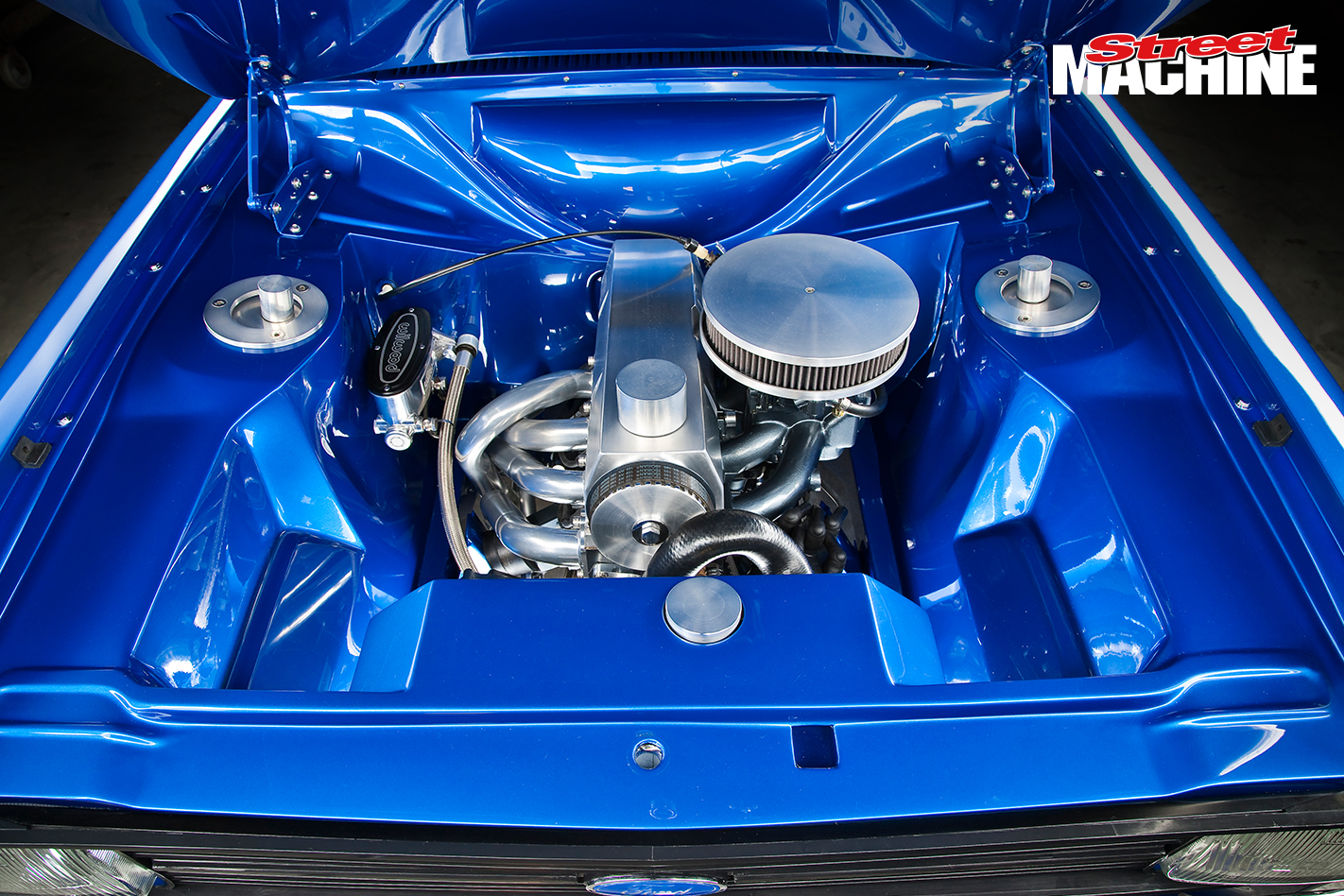 That’s an owner-built Weber-fed 2.0-litre Ford Pinto engine. The bay is a great example of elite car-building, with all holes, seams and joints welded and smoothed

Gary never had the urge to a fit an engine with more cylinders. The 2.0-litre four is a perky unit and was completed prior to this build. Thus, no further work was required. The engine bay was another matter.

“The radiator support bracket was replaced with a handmade one with only the cap and core of the radiator exposed,” Gary says. “The top locking panel was smoothed and extended to hide the headlights and grille mounts. A filler strip was welded along the top of the skirts to fill the void where the guards attach. All brake lines and wiring is hidden.” 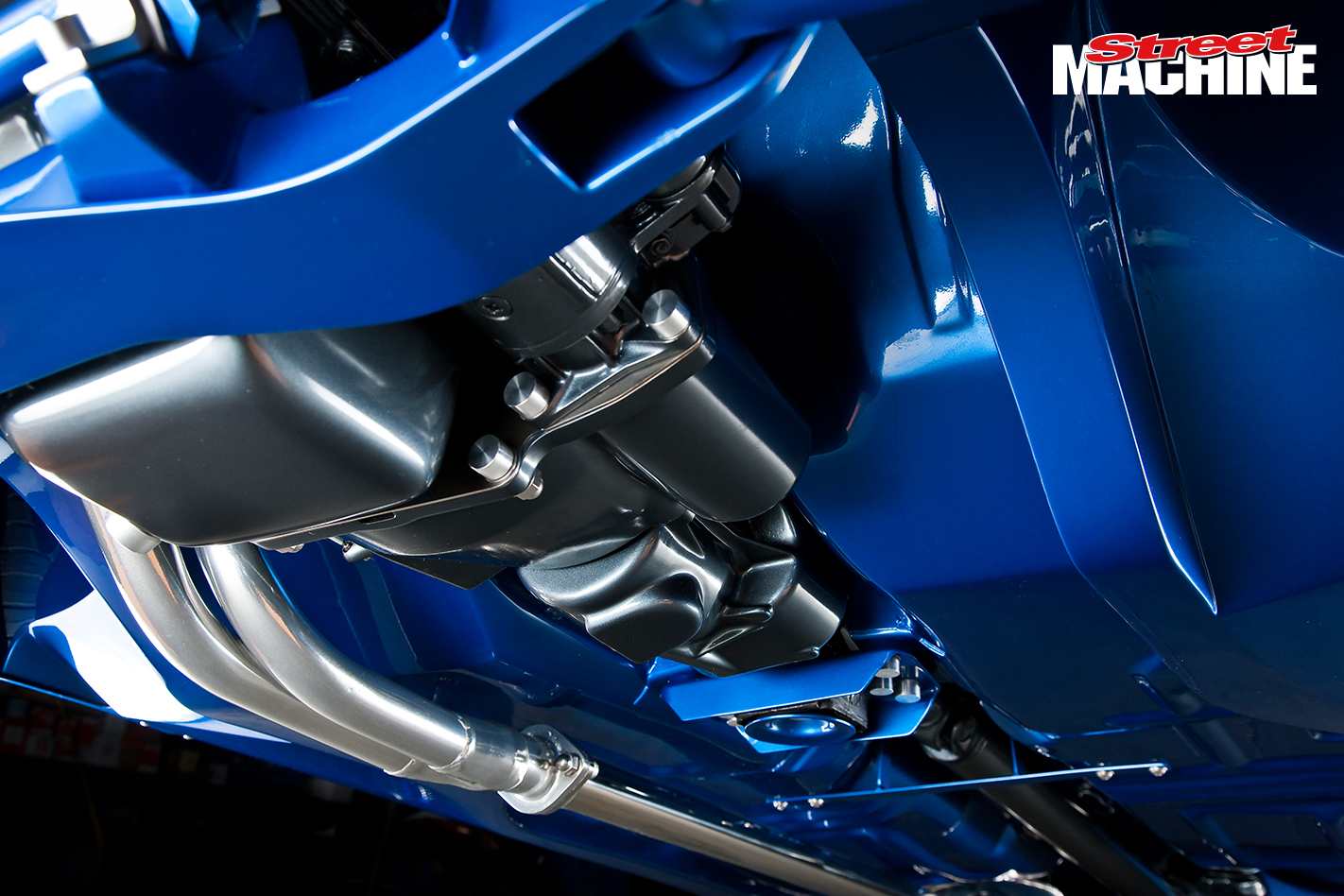 The interior was a major expense, although Gary estimates the use of quality English vinyl, instead of leather, halved the cost. “I didn’t want to trim it like an old-school van; I wanted something different but

modern that wouldn’t date. I started by replacing the original cluster with a Dakota digital unit; this meant welding and repainting the dash without damaging the outer paintwork, and modifying the crash pad to suit the new shape.” 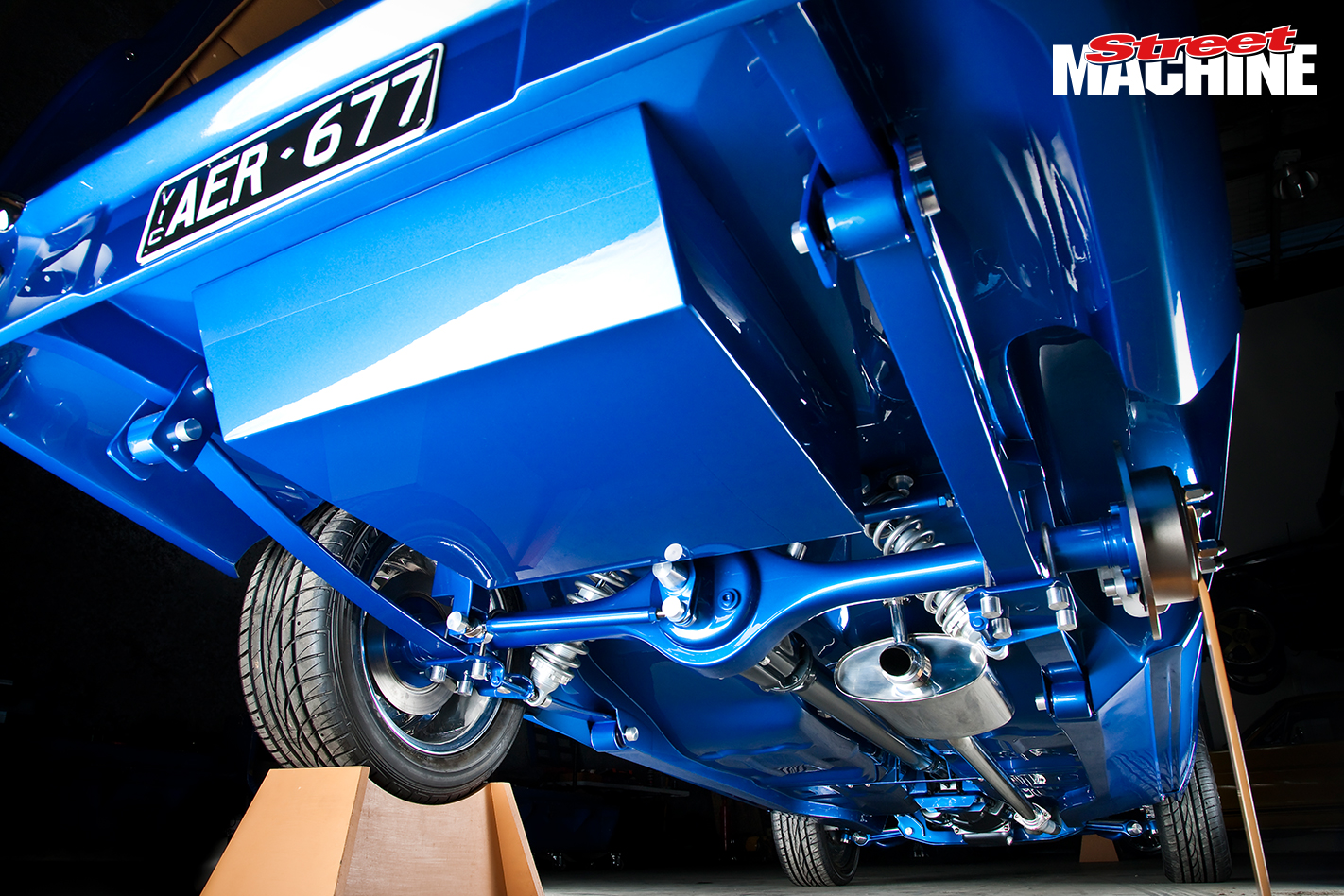 Owner-built fuel tank dominates the rear. A Watt’s link is attached to the standard diff housing and coil springs surround the QA1 dampers

A false tunnel and console was fabricated to house the Sony head unit, start button and billet gear lever boot ring. Flat floors front and rear, under-dash covers and a rear console with speaker housings were next, before the car was sent to Kool Trim to add the suede headlining.

Gary says there were no unexpected problems during the build until right at the end. The newly painted shell was delivered back from All Class Body Works on December 18 – about three weeks before its debut in Canberra. It was all going well until “we fitted the wiring loom and had one wire the wrong way around. It burnt out the whole loom the Saturday before Summernats!” 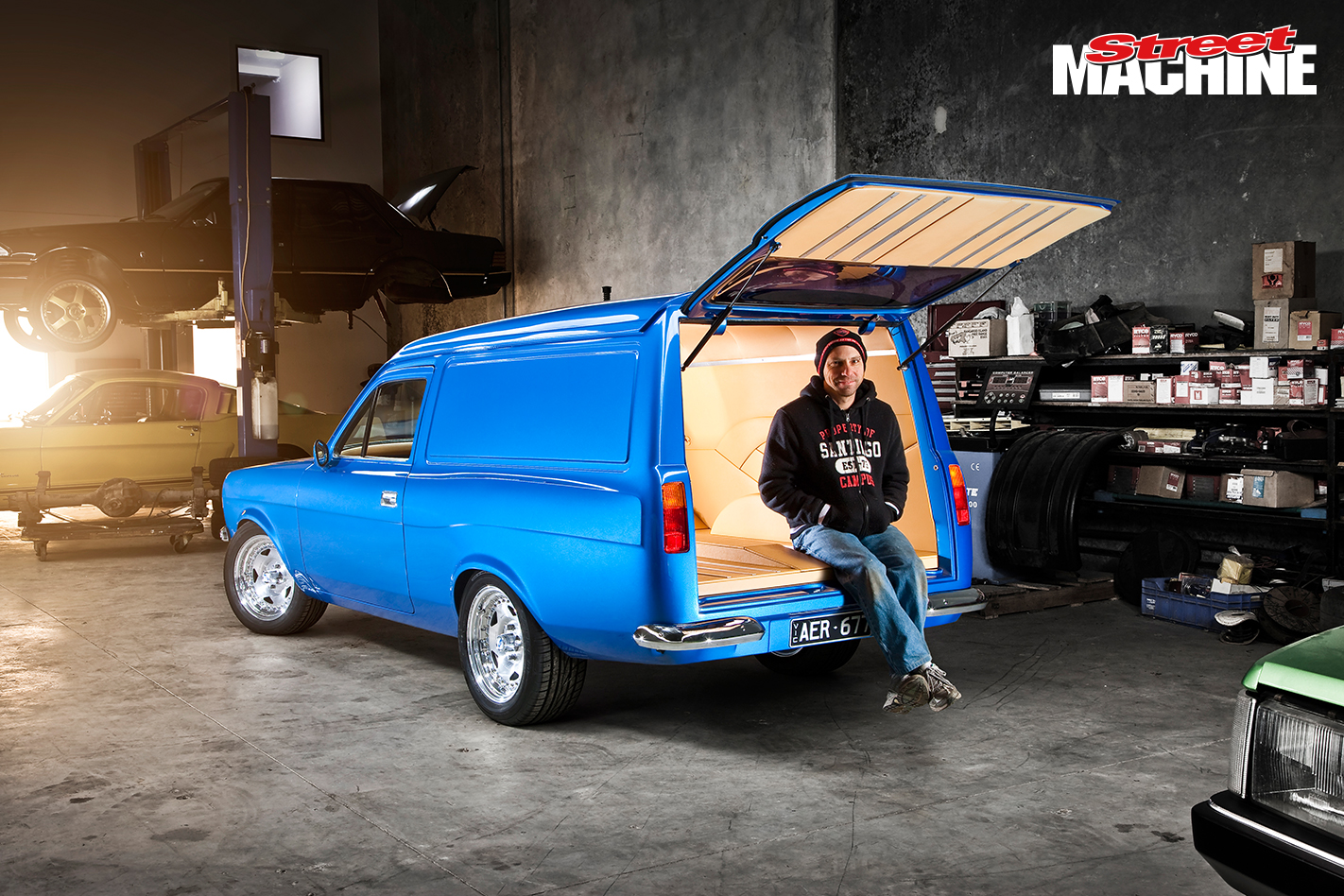 Undaunted, Gary made it to the event on time and was stoked to make the Top 60 and blown away when he won a coveted Top 20 gong. A few weeks later, the van won Best Of Breed at the Melbourne Hot Rod Show and scored an invitation to MotorEx in Sydney, where he picked up third for Impact & Display. “Just being asked was enough,” he reckons.

Gary is equally proud of winning Top Van at the past three Panel Van Nationals and will no doubt be back again next year for another crack. 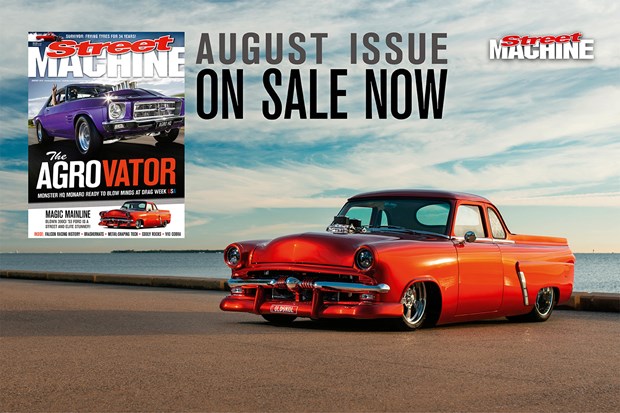 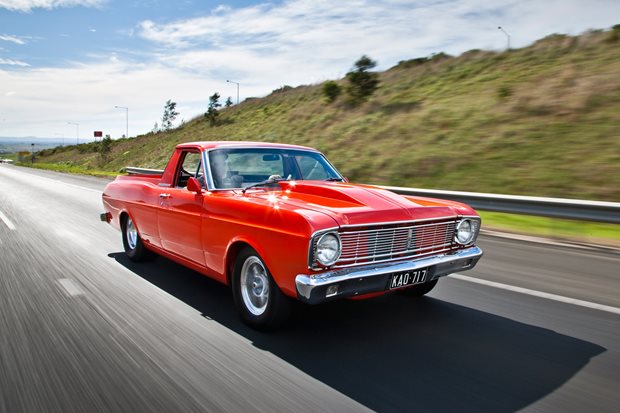 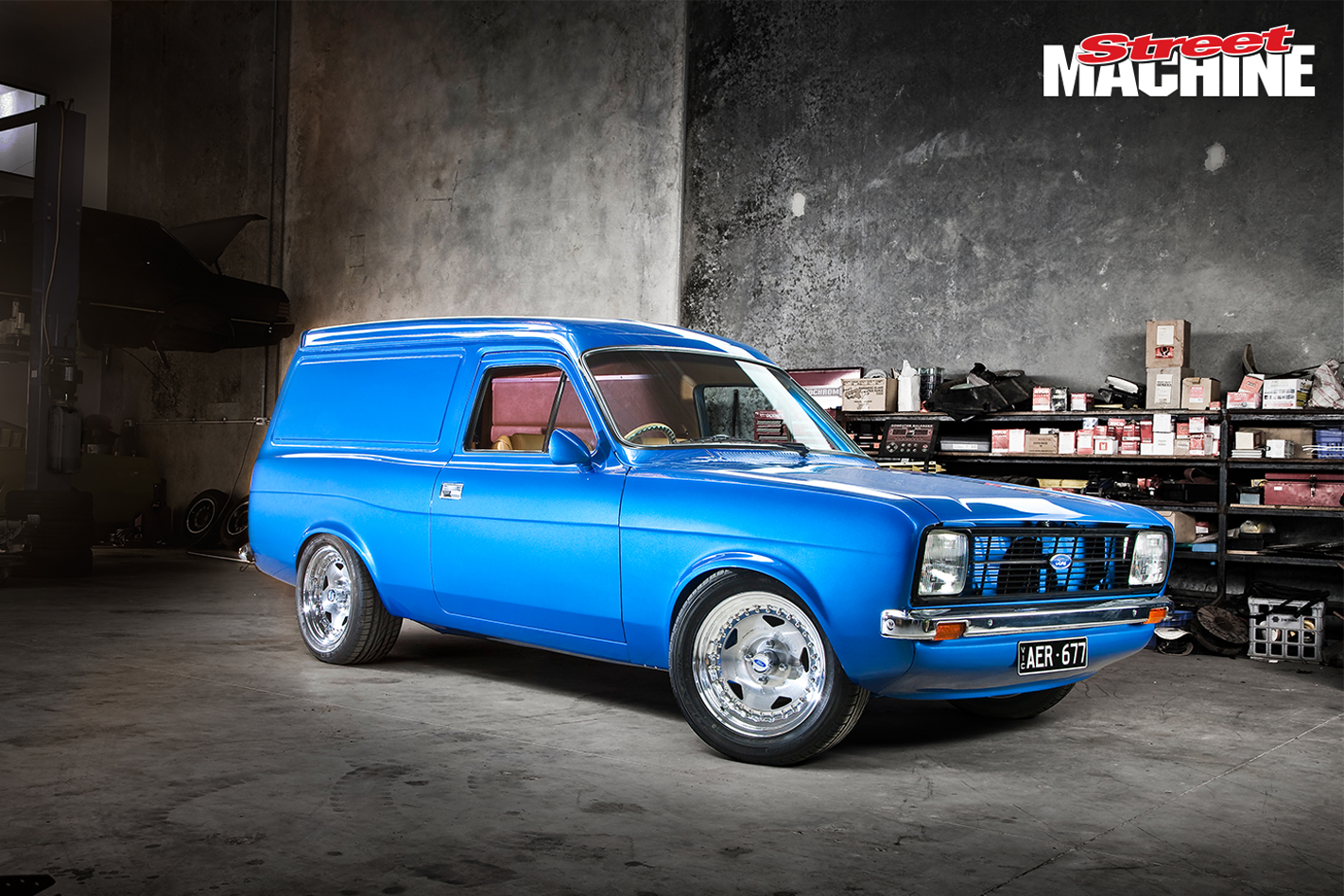 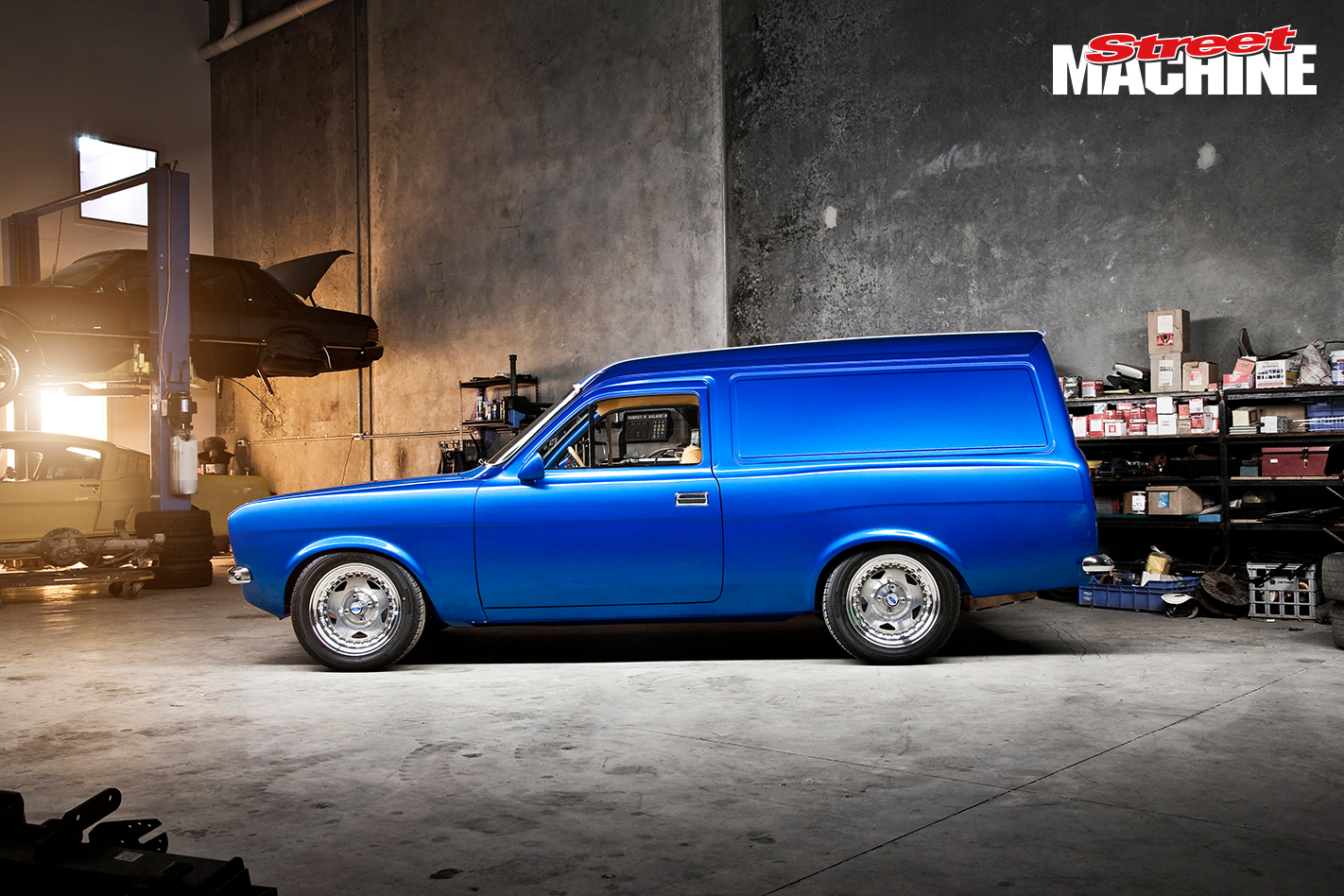 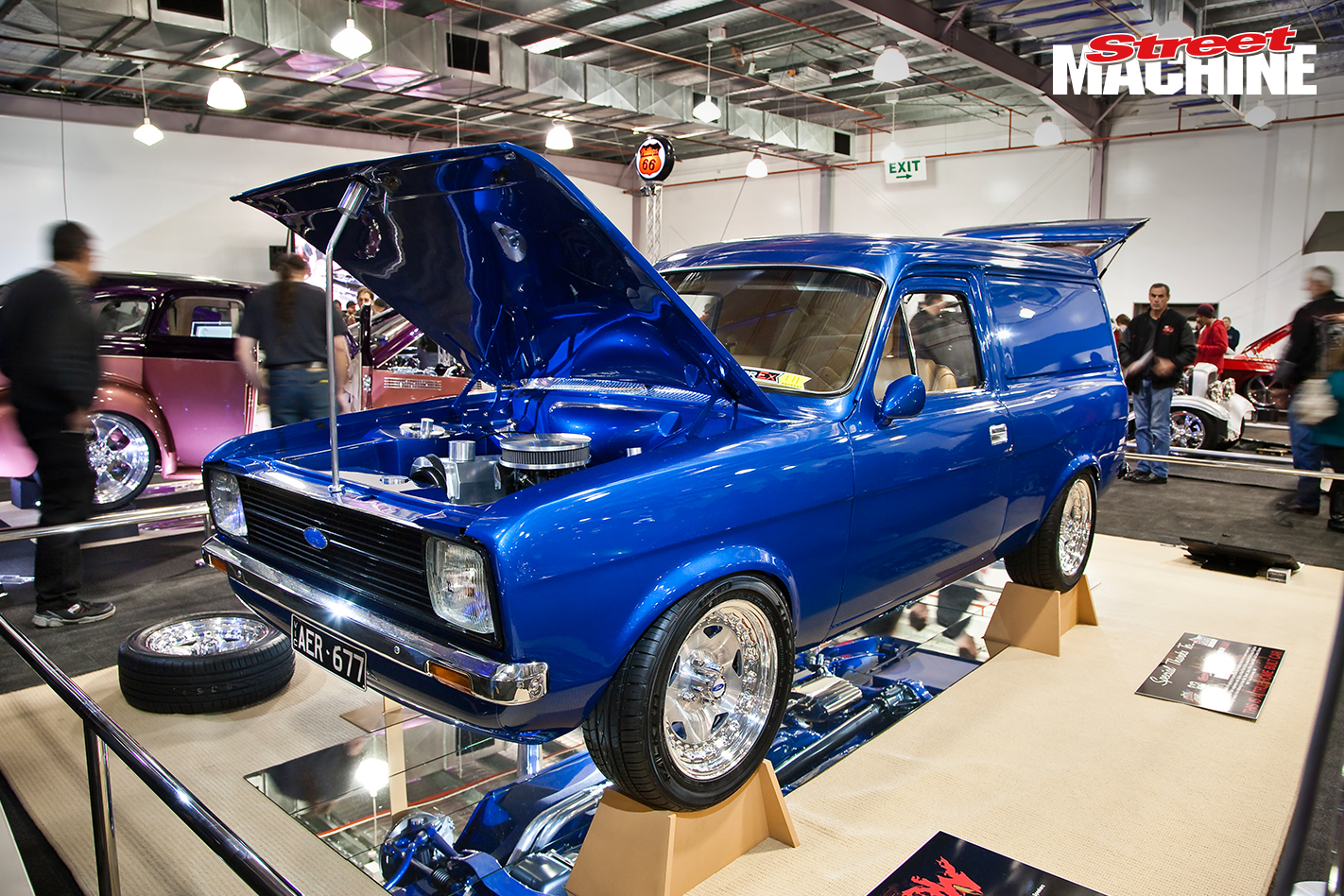 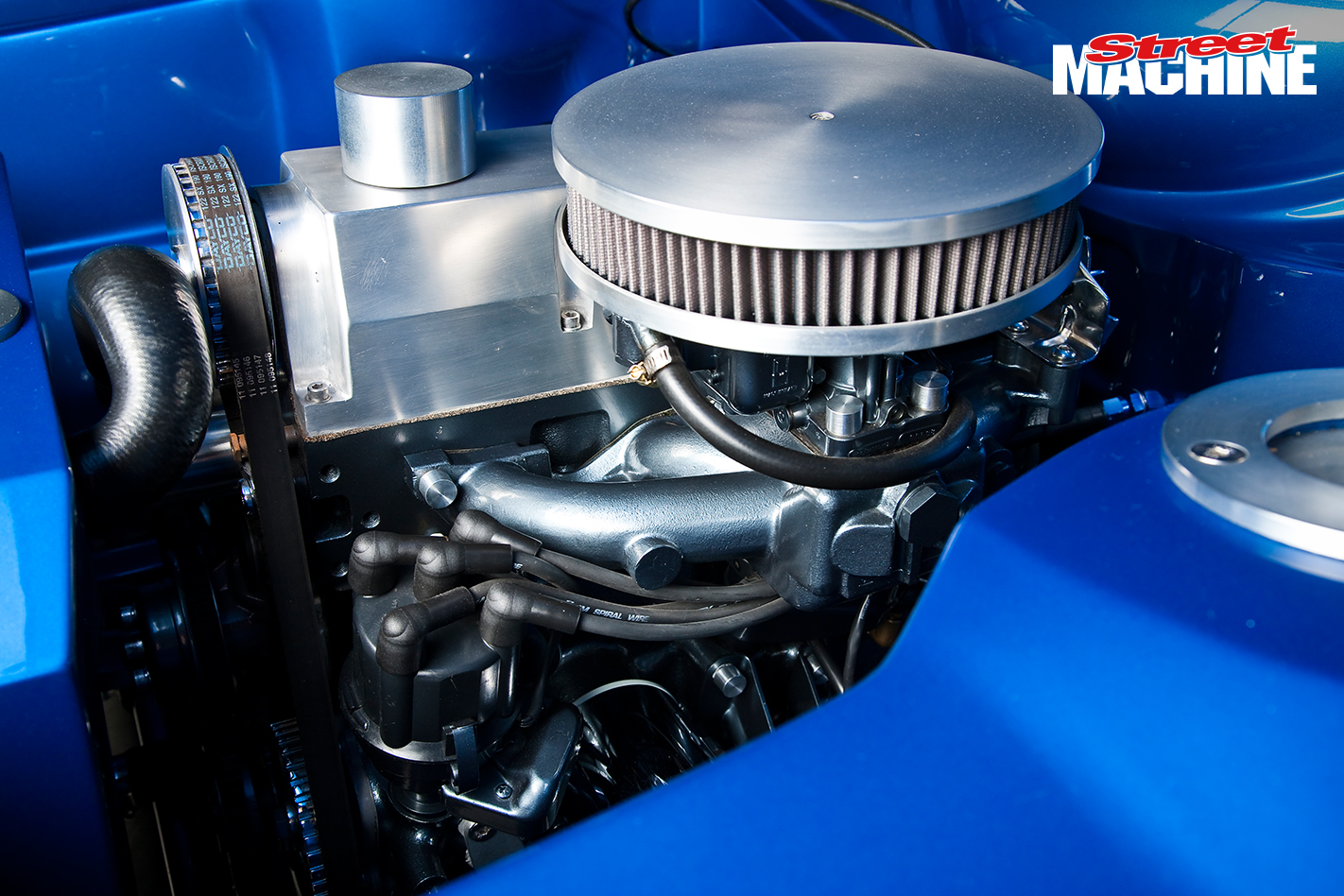 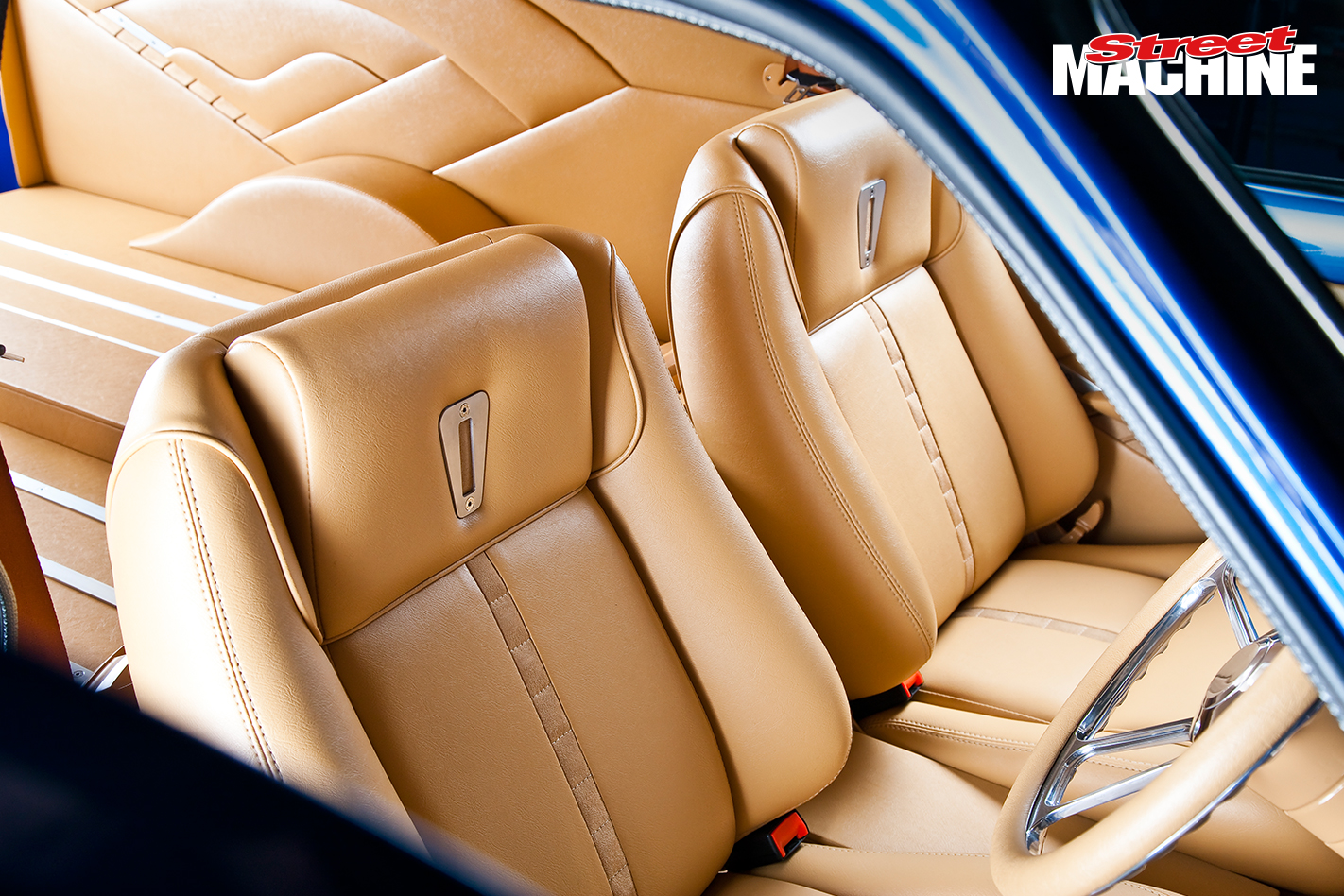 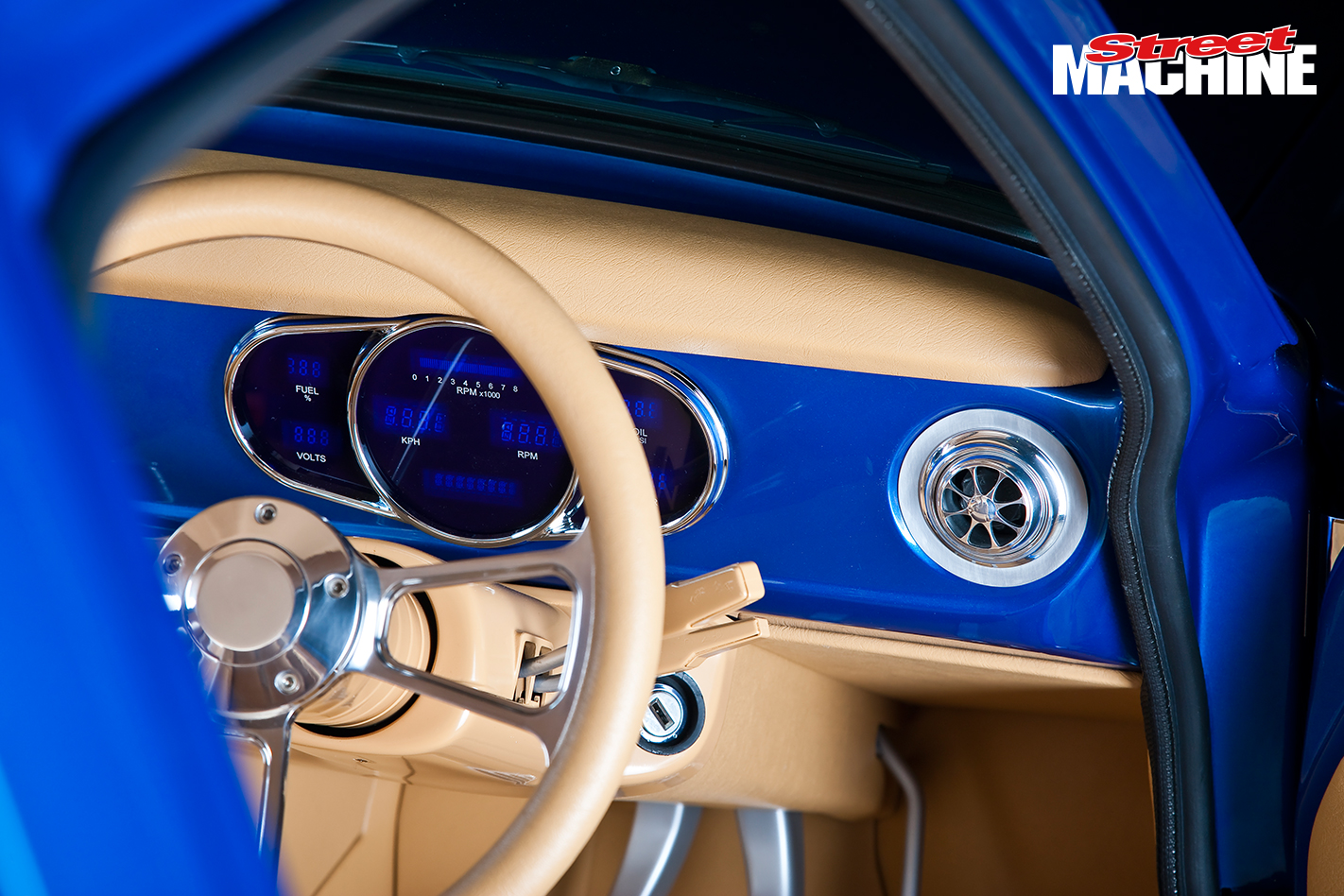 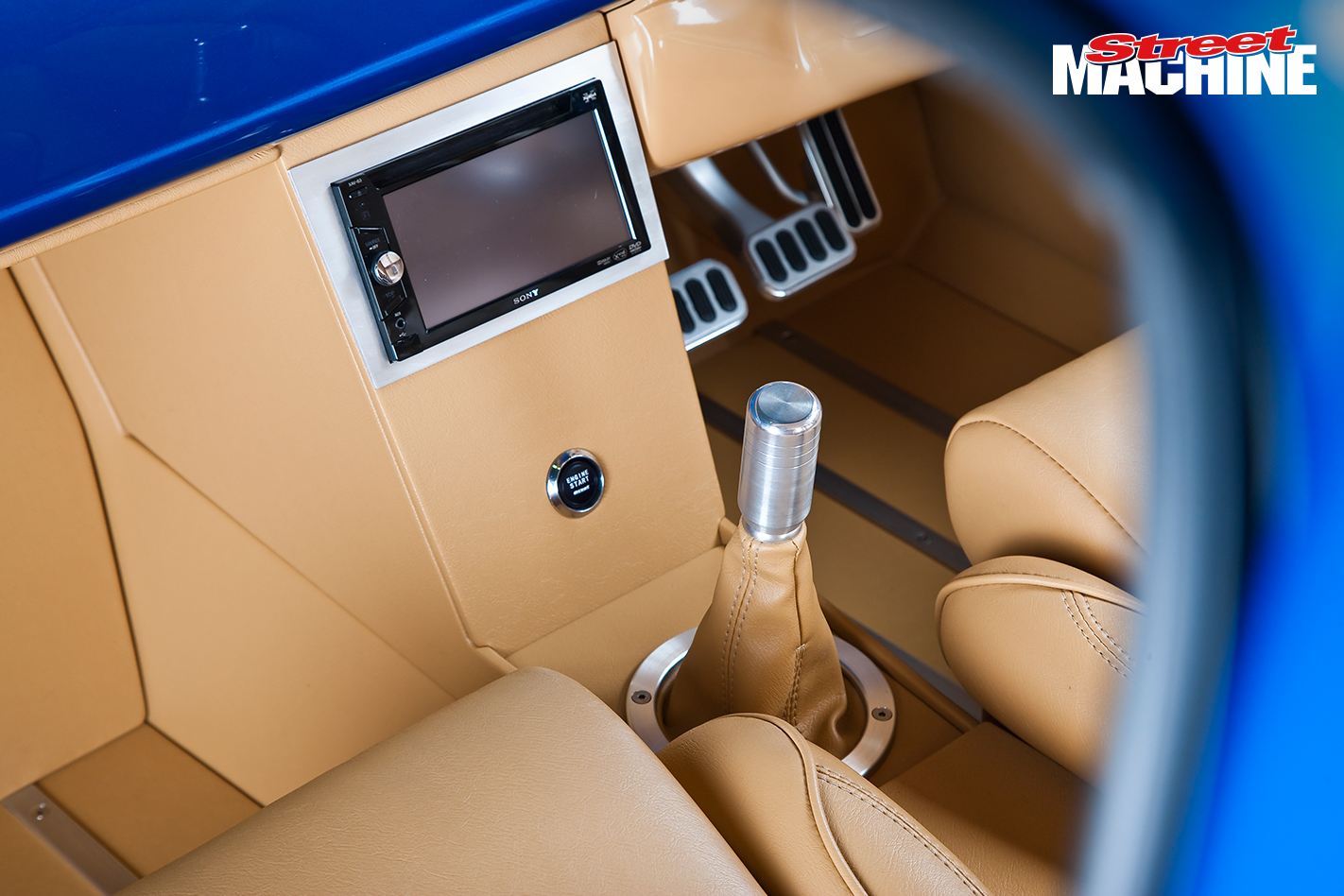 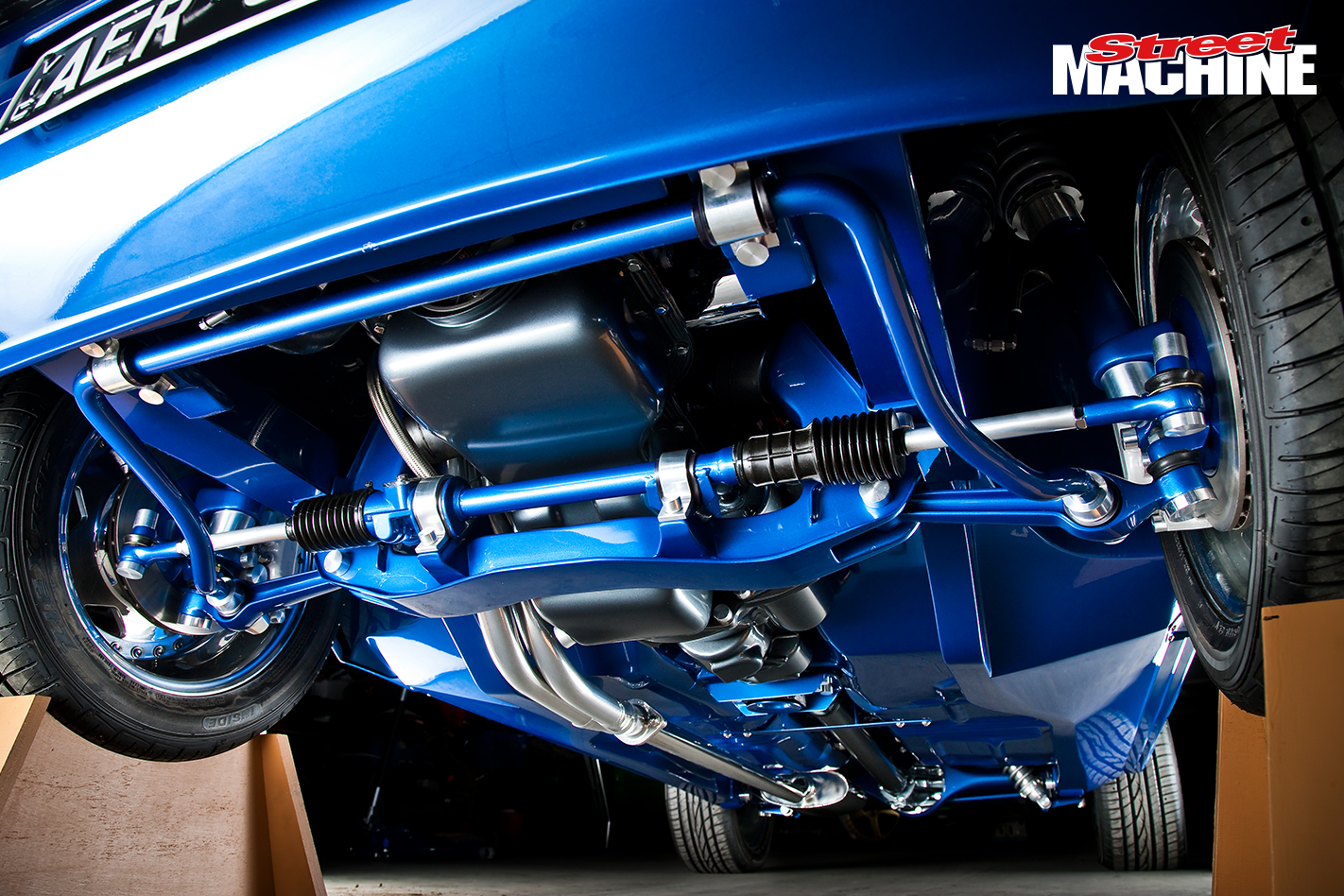