One of the coolest early Ford Falcons on the planet is a custom delivery sedan that lives in Yokohama, Japan

AT THE end of last year, the Street Machine team made our first trip to Japan’s famous Mooneyes Hot Rod & Custom show in Yokohama. It was the 23rd go-around for the event, which is the centrepiece of Mooneye’s activities. We knew the show would be awesome and were hoping to shoot a few feature cars too, so before we left, we did some research to see if we could find some suitable candidates.

After about 10 minutes of searching Instagram, we found Masakazu Sumi and his slammed ’61 Falcon sedan delivery. While far from a glossy showpiece, the Falcon was everything that boils our potatoes: a body style we can relate to, done in a mild custom style and slammed to the ground. We continued to dig and discovered Sumi is not only a photographer, but also works for Mooneyes full-time in a public relations gig. Perfect! 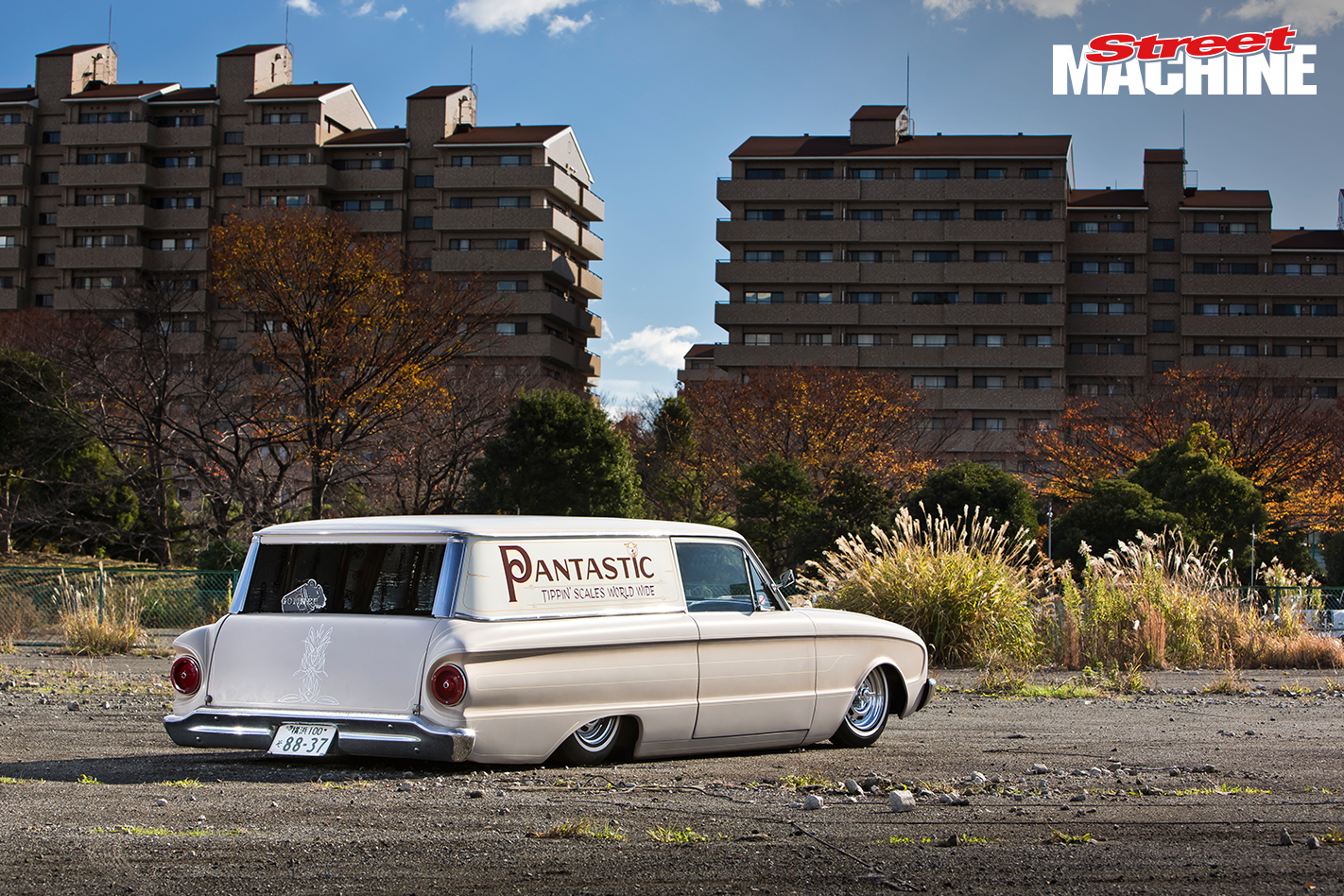 Sumi’s story begins a decade ago. He already was the proud owner of a cool ride – namely a ’63 Chev C10 long-bed – when he spied a ’62 Falcon wagon and was instantly hooked. Back then, early Falcons were a rarity in Japan, but he soon caught wind of a ’61 sedan delivery that was coming from the United States. But as often happens with passionate love affairs, things didn’t work out to plan. 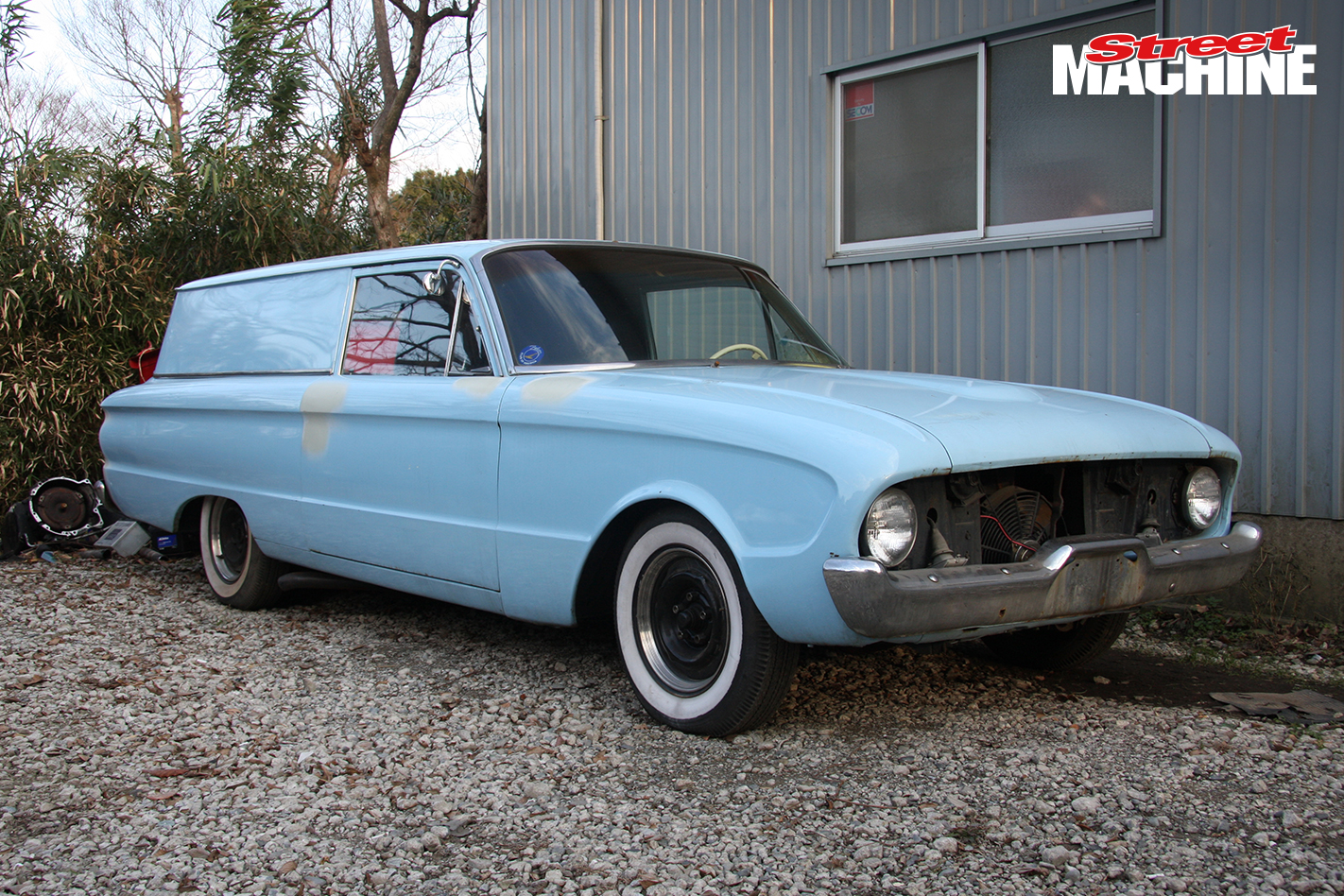 “I immediately purchased it, without checking anything,” Sumi says. “I bought the Falcon from a private importer in Japan. The car came from the United States. But I was deceived by the importer as the person ran away. It took seven years of continuous trouble before the car was in my hands. When I got the car all the parts from the engine had been removed and only the engine block was left. It was in a terrible state with no seats or interior.” 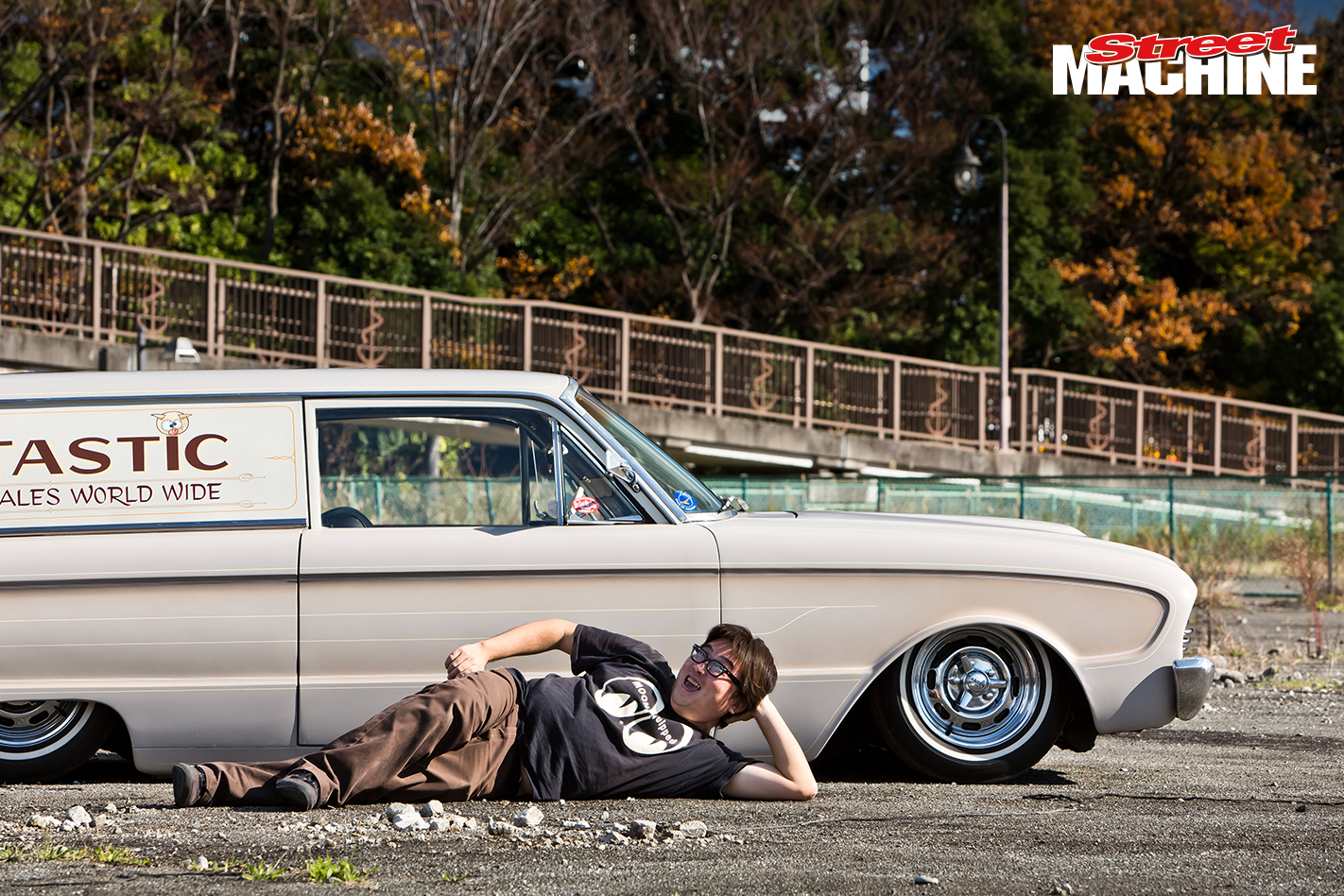 It was tricky getting the Falcon as low as Sumi wanted, it needed one-off front spindles, the rear floor cut out and new rear frame rails

But did Sumi give up? Hell no! He was even more determined to get the Falcon on the road and make it something really special. “The first thing to do was to get it in running condition, but there was a lot I wanted to do with it. Looking around the world I never saw a Falcon with a ride height as low as I wanted to go – to the max!” Now, Japan is full of awesome workshops, but Sumi found it hard to find someone to do the engineering needed to get the Falcon sitting on the deck. “Because the Falcon is a monocoque design, there aren’t many that would do such a silly thing,” he laughs. 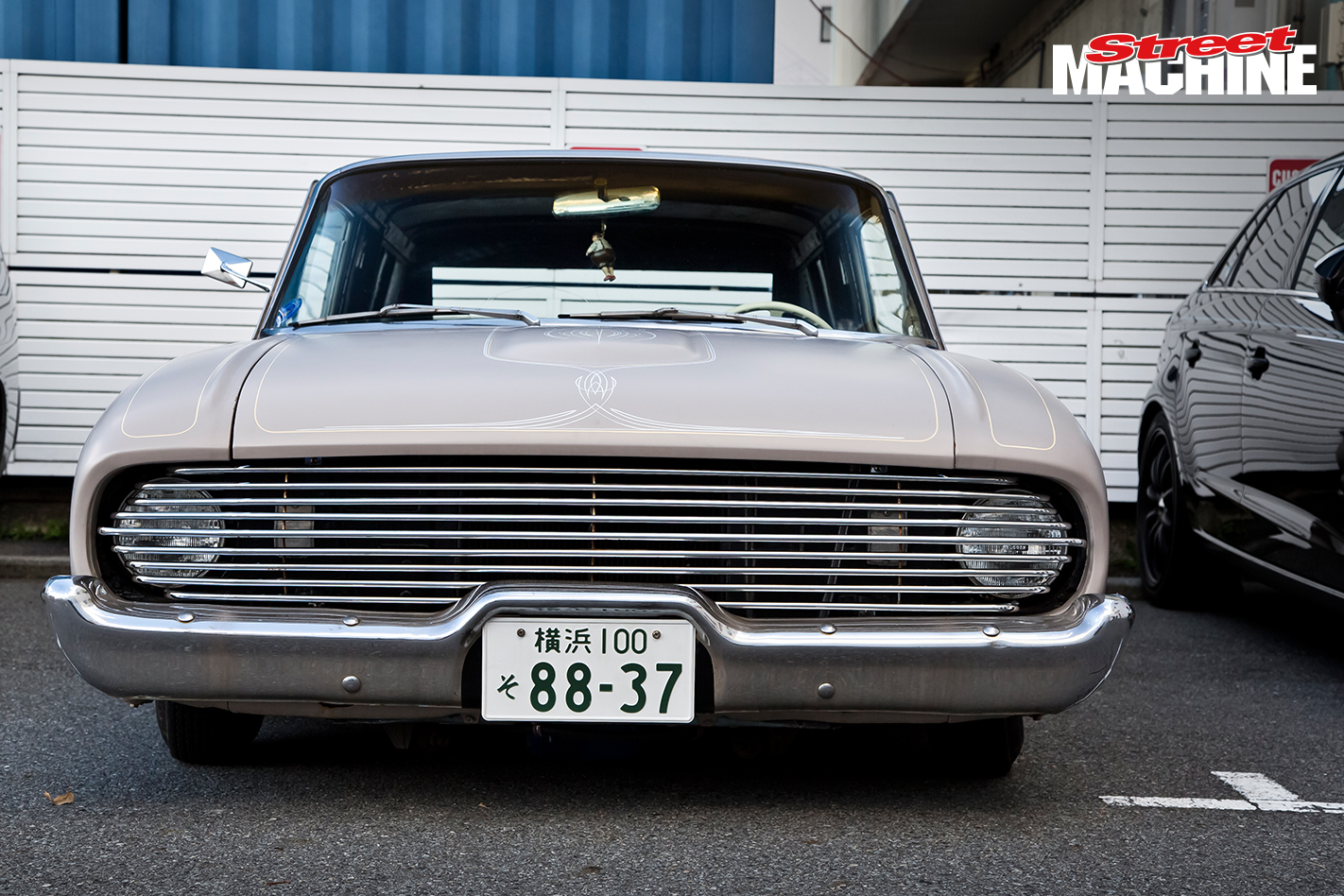 “Then I talked to a shop called Blues Mobile Speed Shop. The boss Takeshi Watanabe said: ‘We can,’ without any hesitation. I started from there.

“It was a big job. To get it sitting right, they fabricated one-off front spindles, cut out the rear floor and made new rear frame rails with a massive kick-up. With air suspension, of course, but we kept the factory drum brakes; I’m not interested in discs! They also re-built the motor, re-did the wiring, built an exhaust and finally painted the car. It took more than two years to complete.” 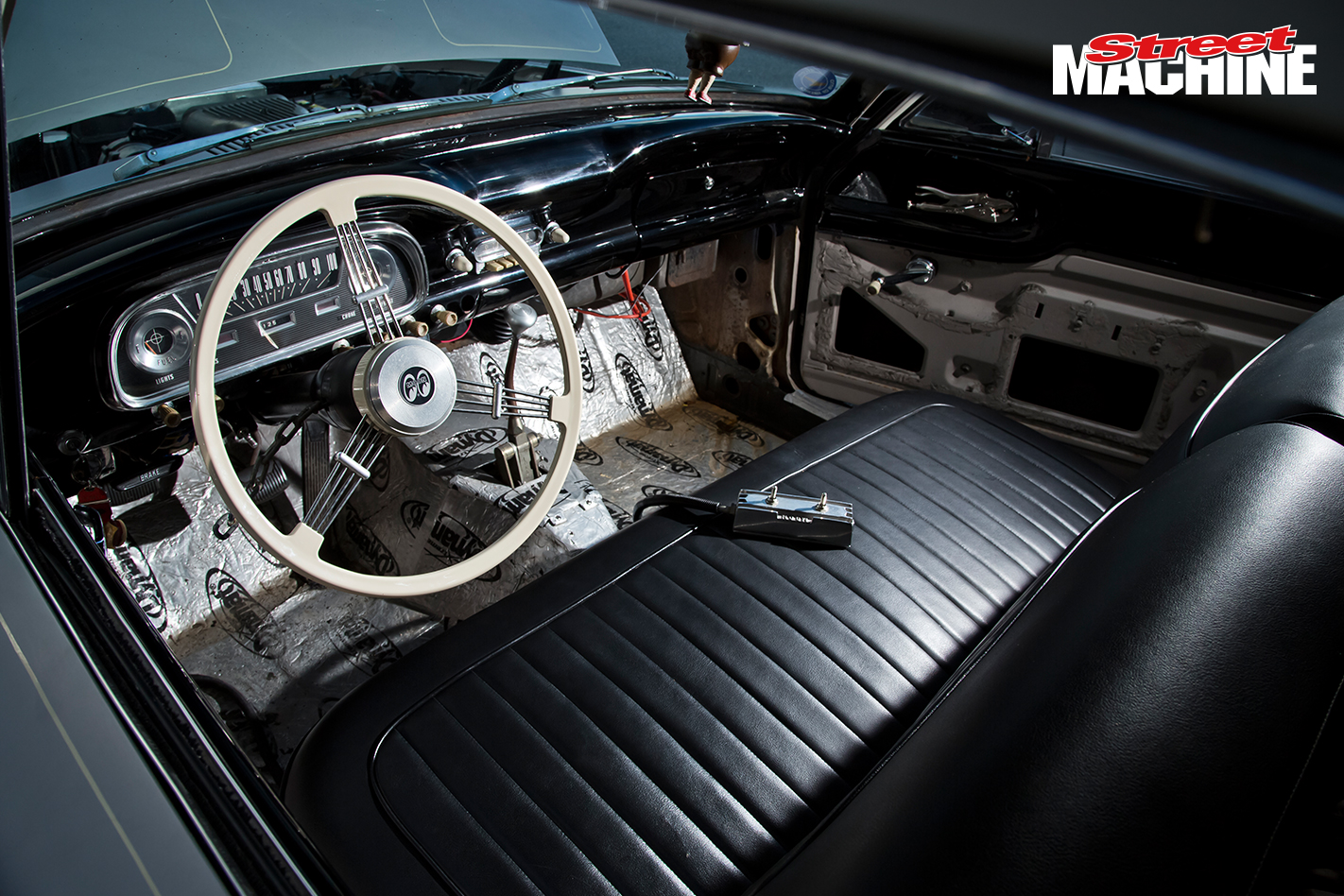 The interior was missing when Sumi got the car, it's still a working progess but isn't high on the priority list as the falcon is his daily driver

Sumi put a lot of thought into the paint design. “It was important to me for the sedan delivery to be painted in different colours. I thought a long time about how to paint the panels and made many simulated variations in Photoshop. I wanted to emphasise the press line on the body with a fade paint, in a colour that no one was using.” 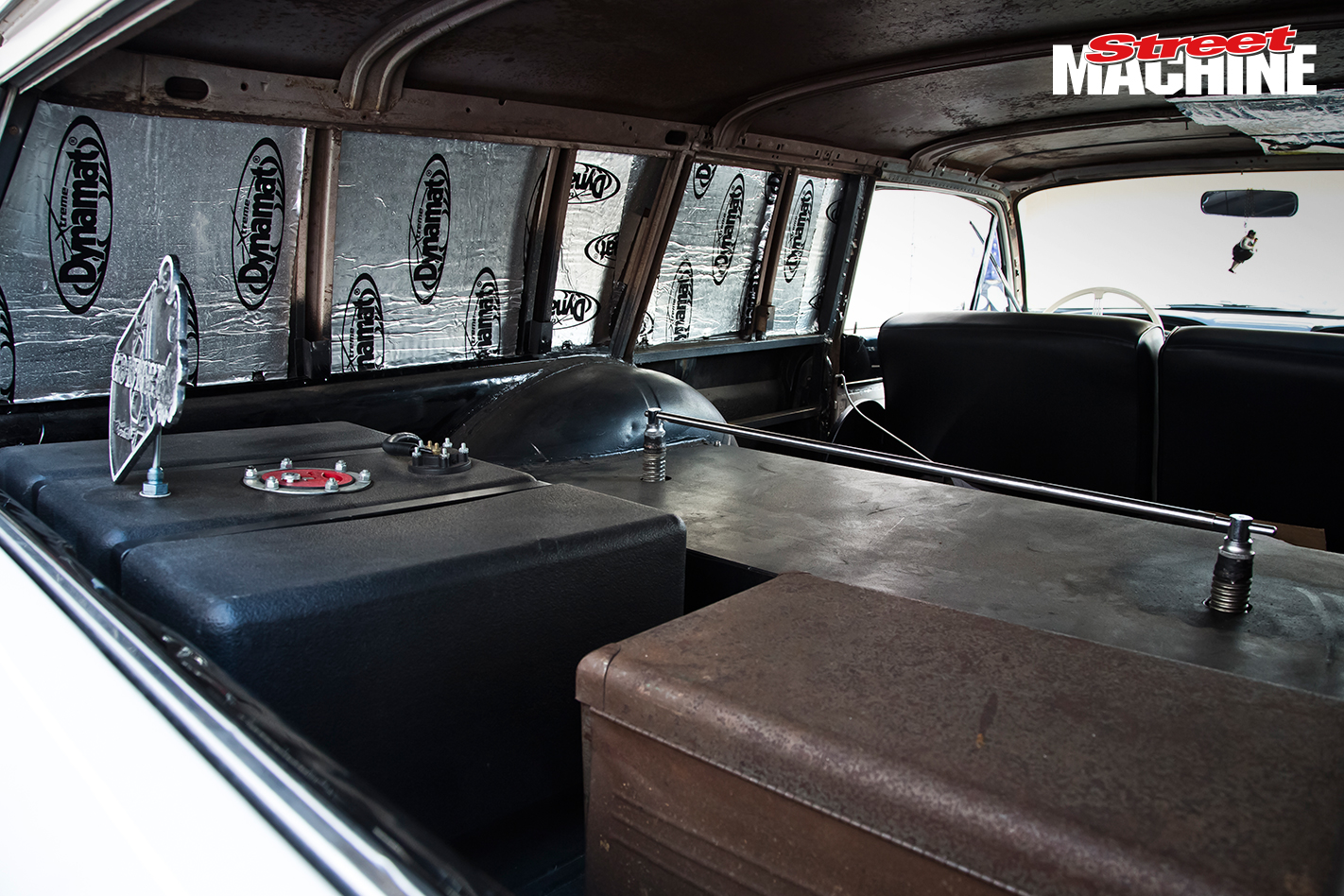 To say Sumi was stoked to have the car on the road after 10 years was an understatement. “To celebrate, everyone at Blues Mobile went with me on a big cruise, as well as my girlfriend, who is now my wife. It was a 200km cruise one-way, with more than 20 cars in the convoy. Anyway, the gas tank had a lot of rust and the car stalled on the expressway twice. We pulled into a rest area and spent about an hour cleaning the fuel filter with parts cleaner repeatedly. On the way back the alternator died but the battery managed to get us back. Just as we got back to the shop, the battery gave out and stopped. It was a blast!” Spoken like a true car guy. 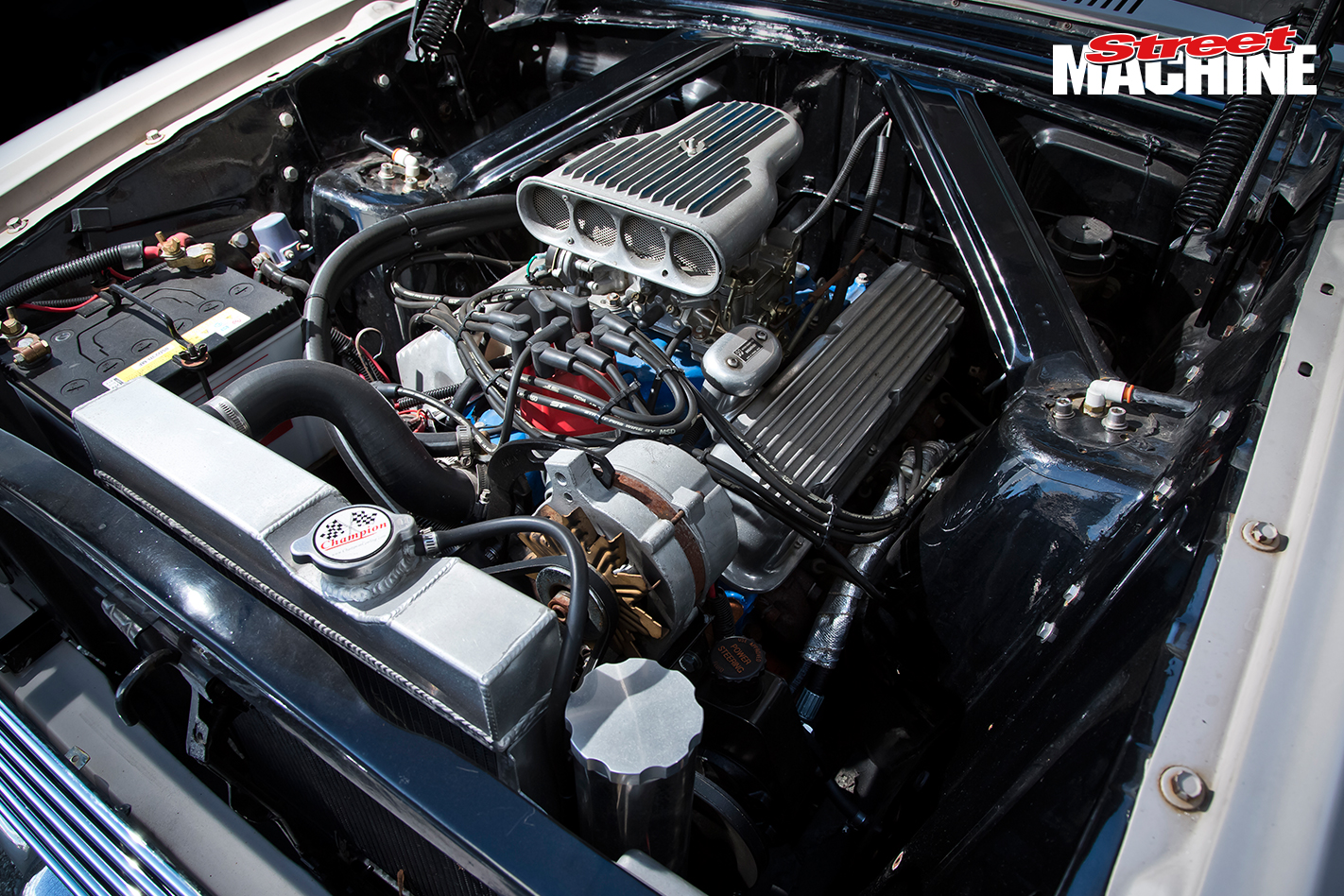 Under the bonnet is a fairly stock 289-cube V8, this thing is all about stance not speed!

After enjoying the car in its slammed but otherwise stock condition, Sumi started to think about the next phase of the car’s evolution. “I love 60s customs, so my next step was to customise, starting with the front grille. I found an American company called Glory Grills, who have been making customs grilles since the dawn of the van era in the early 70s. I didn’t want a flat grille so they custom-made my grille to my specifications, contoured to fit the headlight bezels.”

After running the car on steelies and thick whitewalls, Sumi swapped them over for a set of Japanese Elstar mags and blackwalls. To complete the next stage, he engaged legendary pinstriper Sugi Sack Sugimoto to stripe and signwrite the whole car. And why Pantastic? “Pan is my nickname at work and when I’m doing photography overseas, most people call me Pan. So it is a mix of that and the old ‘vantastic’ term. 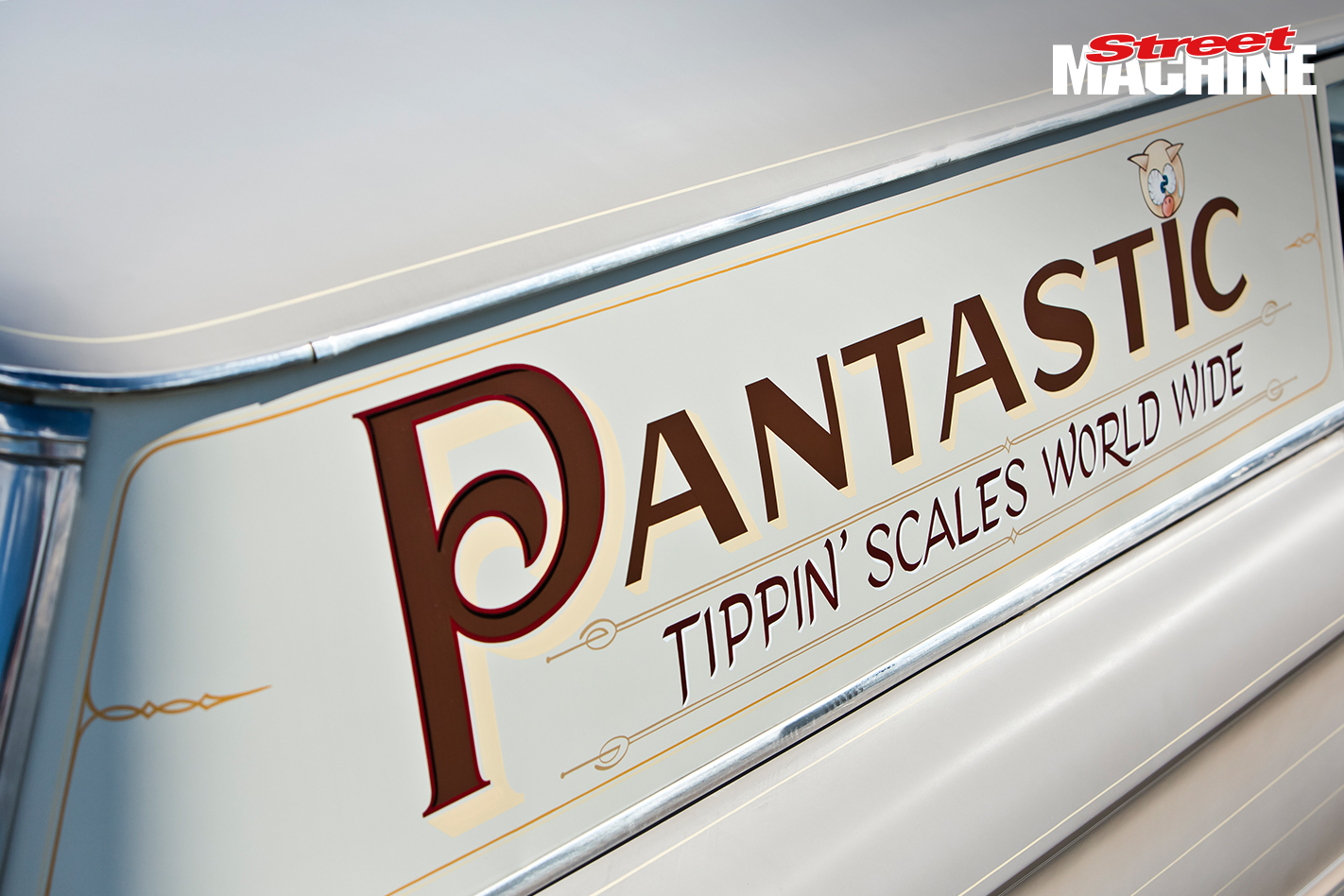 “The next step will be to change the wheels to vintage Radirs, though with the narrow Falcon wheelwells, we’re going to have to narrow them. After that, I want to do a panel paint job on top of what is already there – the design is in my head. And then orange-tint the glass. Ultimately, I want to modify and slant the angle of the rear pillar – similar to a ’57 Chev Nomad – and finally do the interior and paint the whole thing in green candy. It will be completed by the time I’m a grandfather,” he laughs. “But I’m happy enjoying it as it is for now. It is my daily driver and last year we took it to many events, some as far as 400km from my home in Yokohama.” 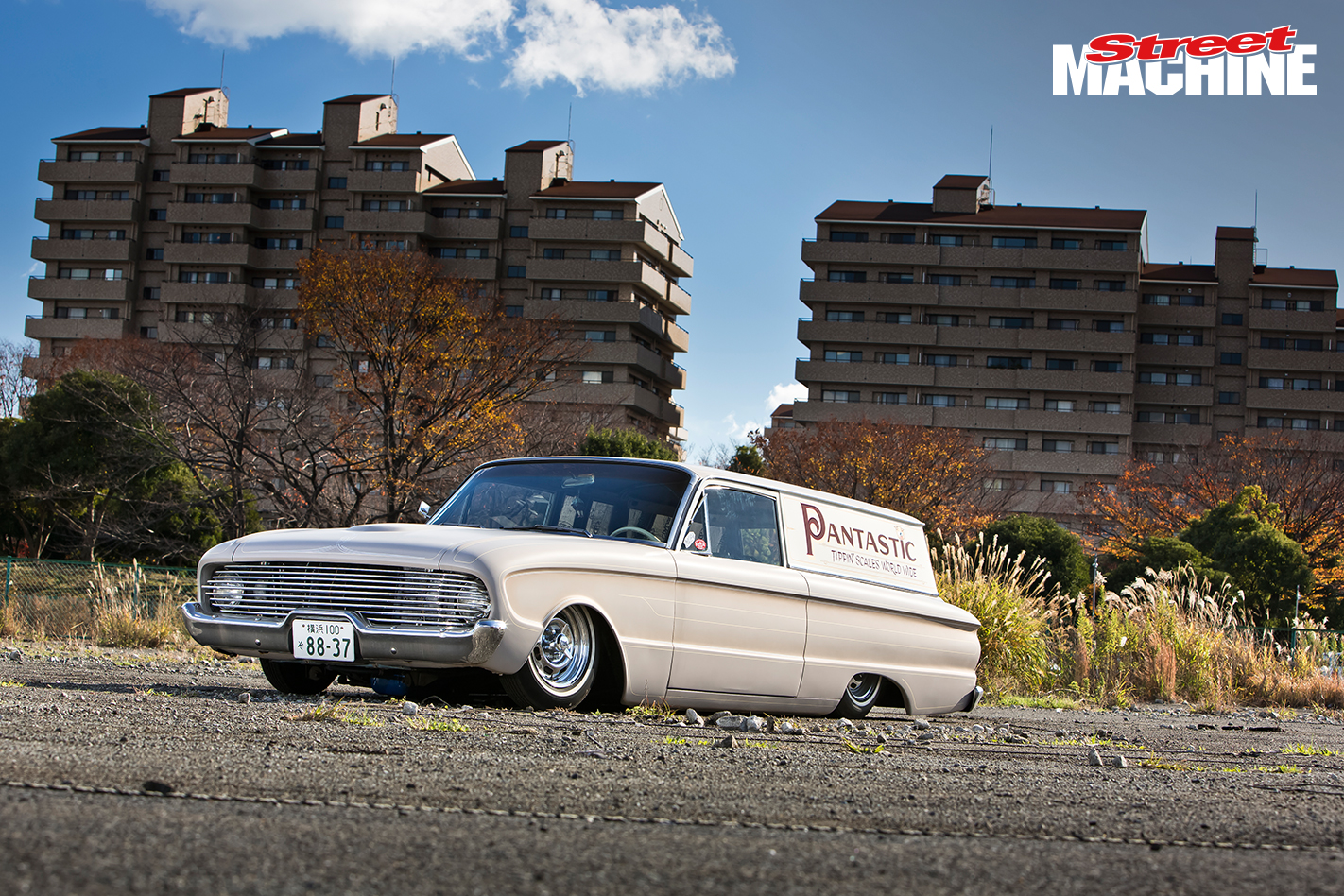 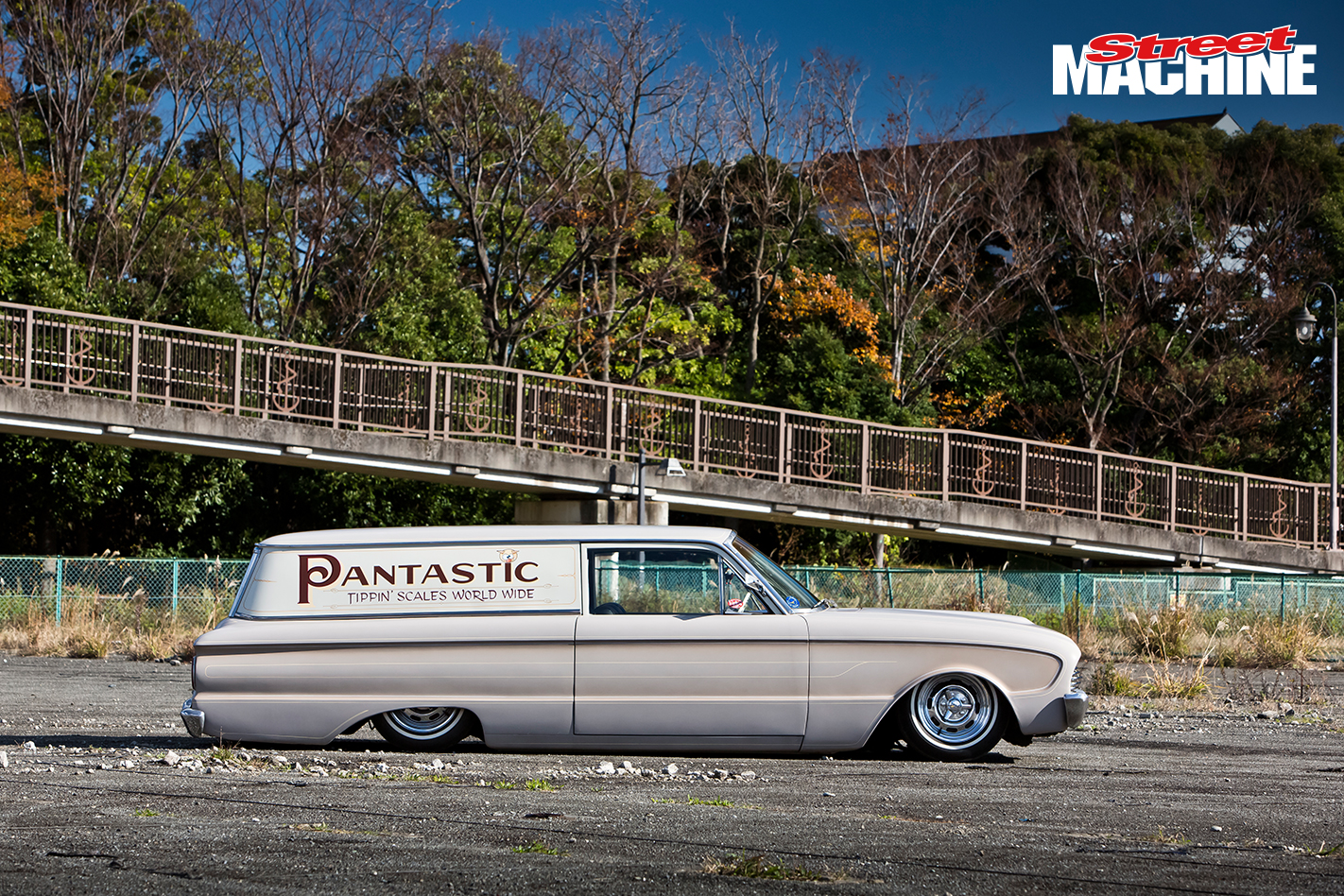 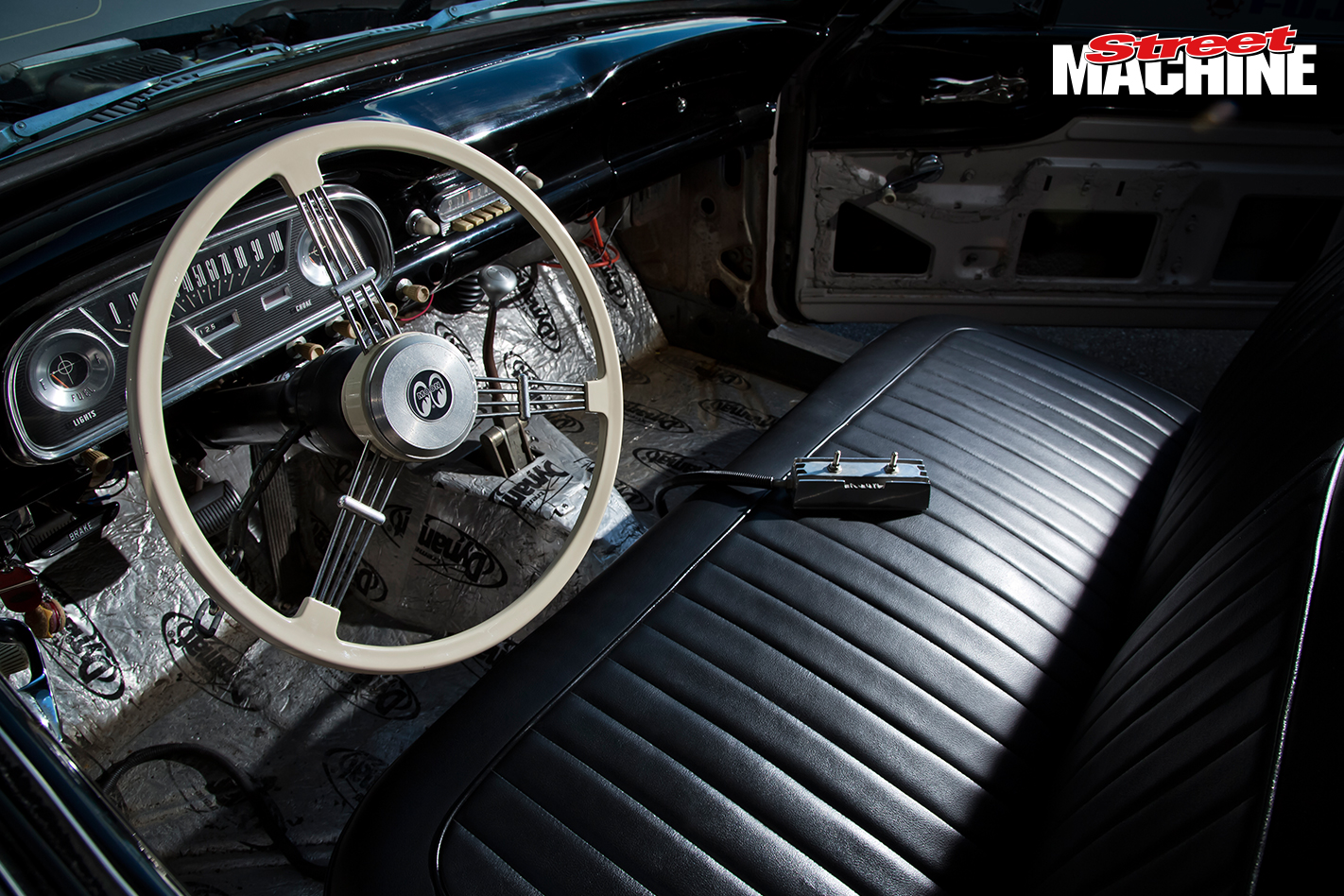 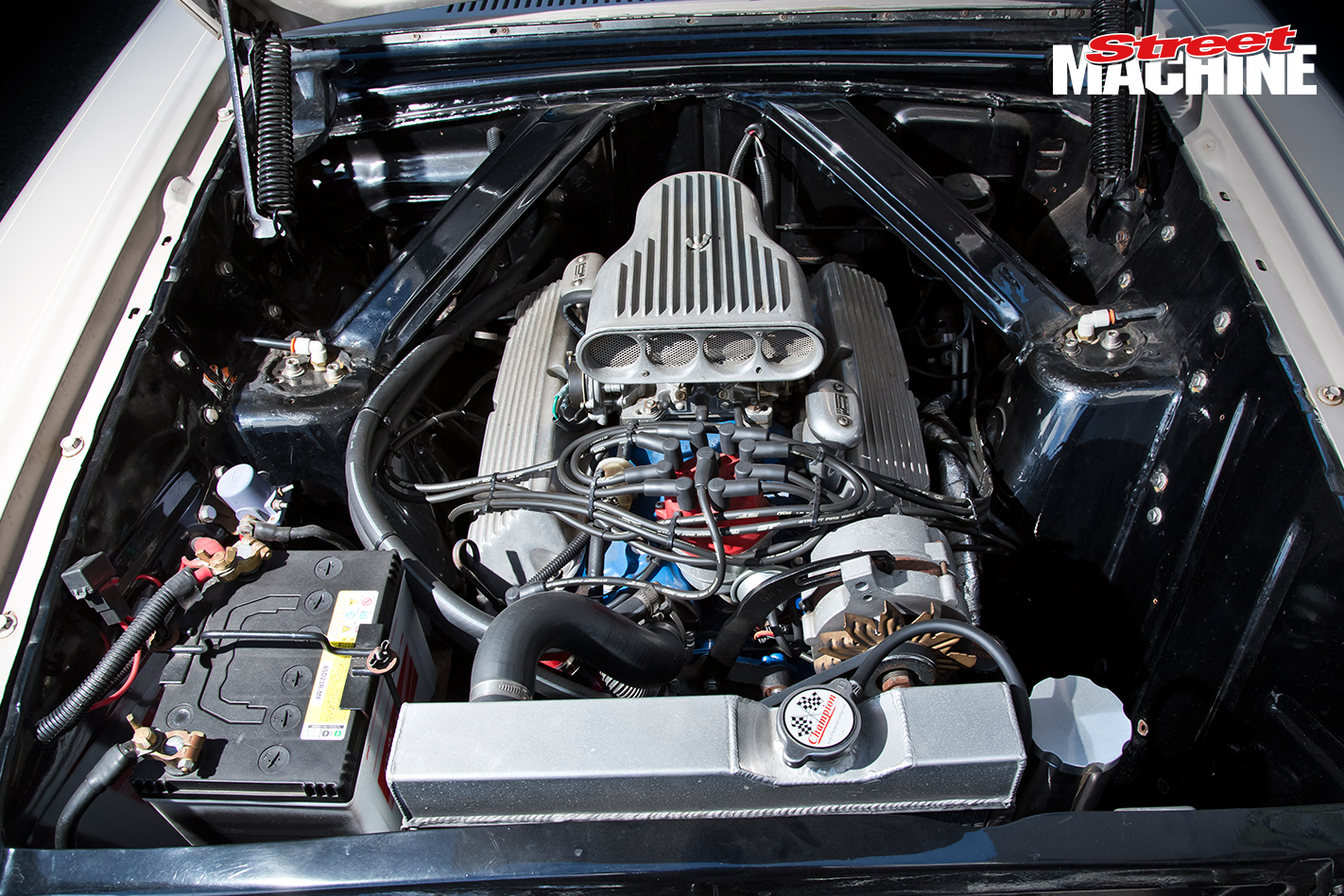