NATHAN Booth’s HR Holden ute was something of a dark horse in this year’s Valvoline Street Machine of the Year competition. The sixteen finalists included some very heavy-hitting cars, which you can check out up on www.smoty.com.au. Nevertheless, Nathan’s ute stormed home to take the most amount of votes, making him the youngest winner ever and the first six cylinder-powered car to take out the big one. Here is the full story on the car, originally published in Street Machine, December 2014: 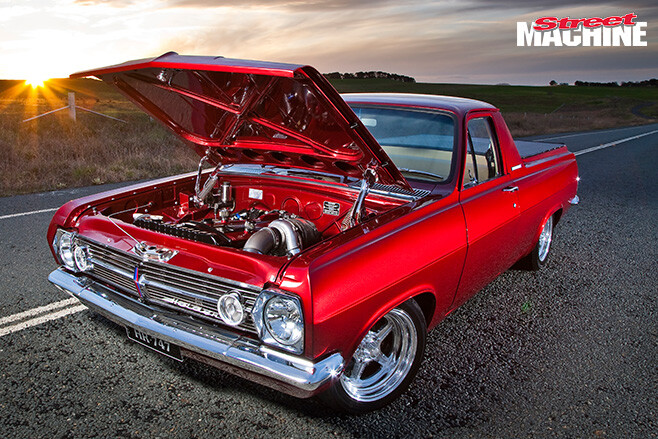 They say the apple never falls far from the tree, and where Canberra’s Nathan Booth and his dad Stephen are concerned, the adage rings true. Stephen’s passion for HR Holdens runs deep – his red six-powered, elite-level HR sedan (SM, Oct ’12) stands as testament to that. It’s a passion that Nathan has clearly inherited. He’s owned this HR ute since the tender age of 12 – long before he was old enough to drive it – and has spent the past decade transforming it into the Nissan RB25DET-powered showstopper it is today. “It was sitting in dry storage in Canberra covered in old newspapers when we came across it; a complete car with barely any rust,” Nathan says. “I was pretty young at the time, so it just sat in the shed while the old man and I stripped it down and threw around some ideas.” As far as ideas go, using the grunty twin-cam turbocharged Nissan mill was a pretty good one, but Nathan considered a number of other options first, including a warmed-over 186 and a Commodore V6, and even had a twin-turbo 202 resting in the engine bay at one point. But after being impressed by the performance and reliability of his mates’ RB-powered drift pigs, and with some encouragement from his tuner, Nathan opted for a more contemporary boosted in-line six. “It seemed that for what you’d spend on an RB25, a tough Holden six would make half the power for about the same money,” he explains. “I bought an R33 GTS-T Skyline front-cut out of Japan and pulled the motor and ’box out of it. We got the motor mounted up, made a sump and custom oil pick-up, enlarged the trans tunnel, fitted a Commodore diff and had the rear four-linked by Welfare Engineering in Canberra.” The engine bay was smoothed and every hole was welded up, except for those required for the steering column and brake booster. 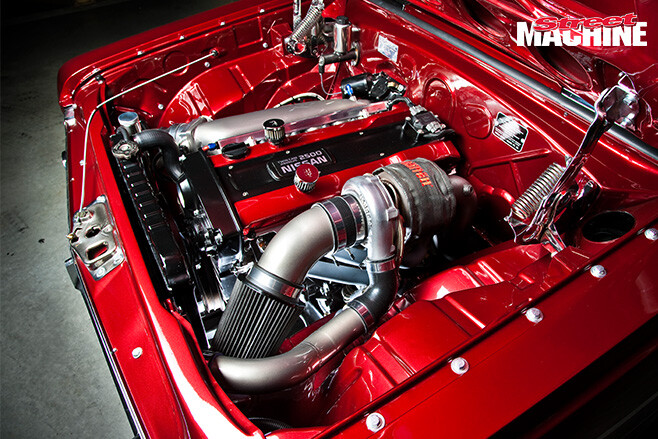 Meanwhile, Nathan took the opportunity to replace the head gasket on the RB25 as a precautionary measure, fitted a set of Tomei Poncams for a bit of extra poke, and replaced a known weak point – the oil pump – with an N1 item. But what these engines really love is boost, and Nathan opted for a Garrett GT3076R turbo, mounted on a custom-built manifold by Fyshwick Exhaust. Custom piping channels the intake charge through a neatly hidden Jasma intercooler and into the smoothed and painted GReddy plenum via a Hypertune throttlebody, while boost is regulated by a Turbosmart wastegate. The Jatco four-speed auto was shipped off to be manualised and fitted with an MV Automatics converter, and the BorgWarner diff boasts a Strange spool and 31-spline billet axles, which were shortened to suit the 15x9in Billet Specialties Street Lites and 255/50/15 tyres. The custom four-link works with adjustable QA1 coil-overs to maximise traction, while Koni shocks and King Springs up front improve handling and provide a ground-hugging stance. Disc brakes on all four corners do the stopping, powered by a modified HR master cylinder and remote booster. Once the mechanicals were all in place, the Ruby Red Pearl duco was applied to the body by Aaron O’Brien; one of only two tasks not performed by Nathan, Stephen and their mates in their shed at home. The other was the interior re-trim, which is the work of Trent and Josh at Goulburn Motor Trimming. 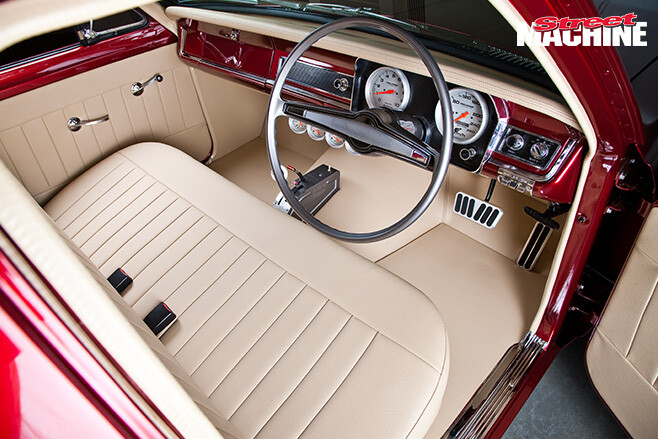 The factory HR bench seat was torn down to the frame, resprung, re-foamed and reshaped for a more modern look. False floors add to the clean, simplistic look, along with a standard HR tiller. Auto Meter gauges and a B&M shifter spice things up a bit, and Nathan elected not to fit a stereo, stating that he’d rather listen to the boosted six-pot doing its thing. Trent also whipped up a custom tonneau cover, but the HR’s tray is so beautifully done that it’s almost a shame to put it on. The cargo area is sprayed in a tintable Raptor tray-liner material, so it’s maintenance-free and easy to keep clean. Due to the coil-overs interfering with the location of the factory fuel tank, a tray-mounted fuel cell was used, framed perfectly by the custom hardwood floor. 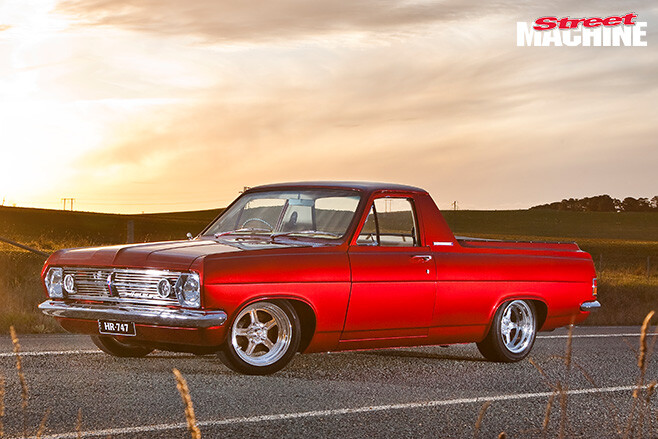 “It’s won some trophies and got a lot of positive feedback, and when people appreciate what you’ve done it makes it all worth it,” Nathan says. “Some people walk up and freak out when they see the Nissan motor; it turns plenty of heads. Dad was a big influence and a huge help with the car. We built it together in his shed.” 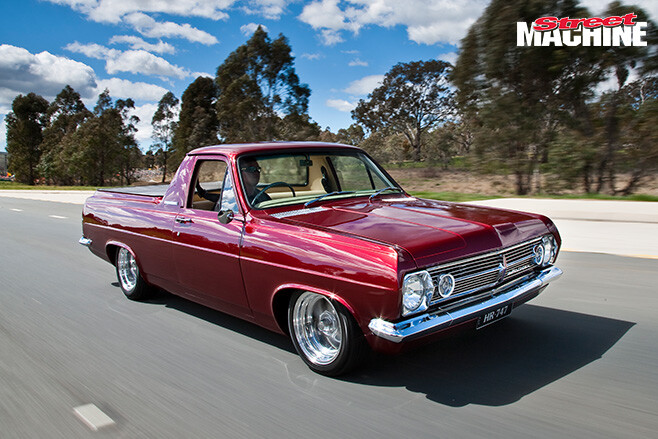 The Booths have enjoyed showing their HRs side by side, and there’s talk of dragging them north to Warwick for the Six Banger Nats. “The ute should make around 300kW at the wheels, so if it gets traction it should go pretty well,” Nathan says. “It’s done a bit of driving, but we’re still tuning it and getting it ready for Summernats. I’m going to put it in Elite at Summernats, but I want to do a couple of laps and some driving events, too.”