DUNCAN Macfarlane is only the second owner of this Blue Oval time capsule. He had a few XAs back in his late teens and has always been a fan of the first truly local Ford. His wife Karen likes Falcons too, so when he found this car online and made the inevitable purchase, it was initially supposed to be for her.

Duncan was alerted to the car by a mate. “I hadn’t been looking for one, but we went and had a look and I ended up buying it straight up,” he says. 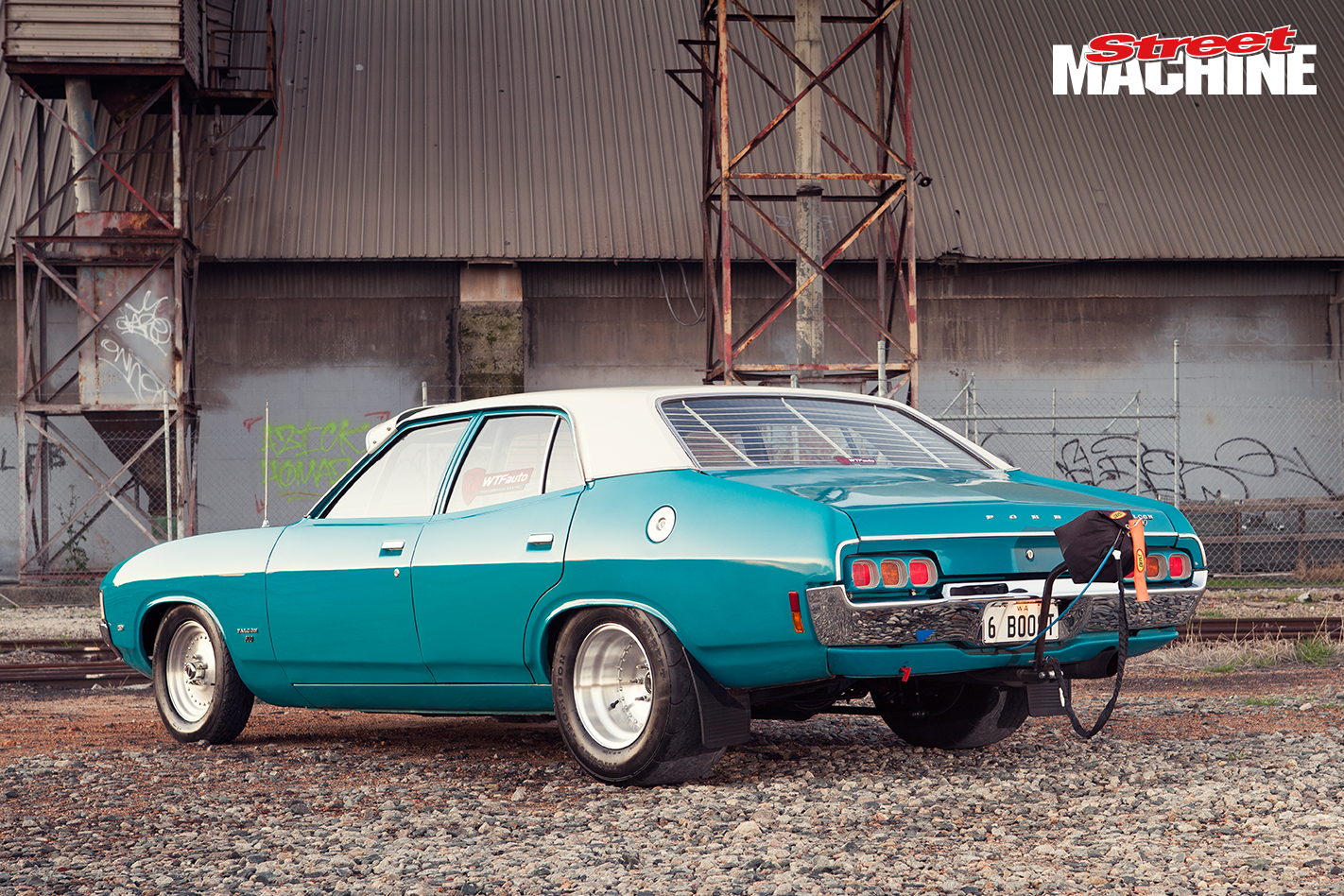 And why wouldn’t you? Just check out the sun visor, mud flaps, mesh headlight protectors and venetian in the back window. It’s the real deal, the one-owner barn find we all dream about. “The old boy who had it looked after it pretty well,” Duncan says. “He actually gave it to his grandson because his daughter took his licence off him when he backed into something and bent the back bumper. The grandson drove it around for about two months and decided it wasn’t for him.” Can you imagine? That kid must have rocks in his head! 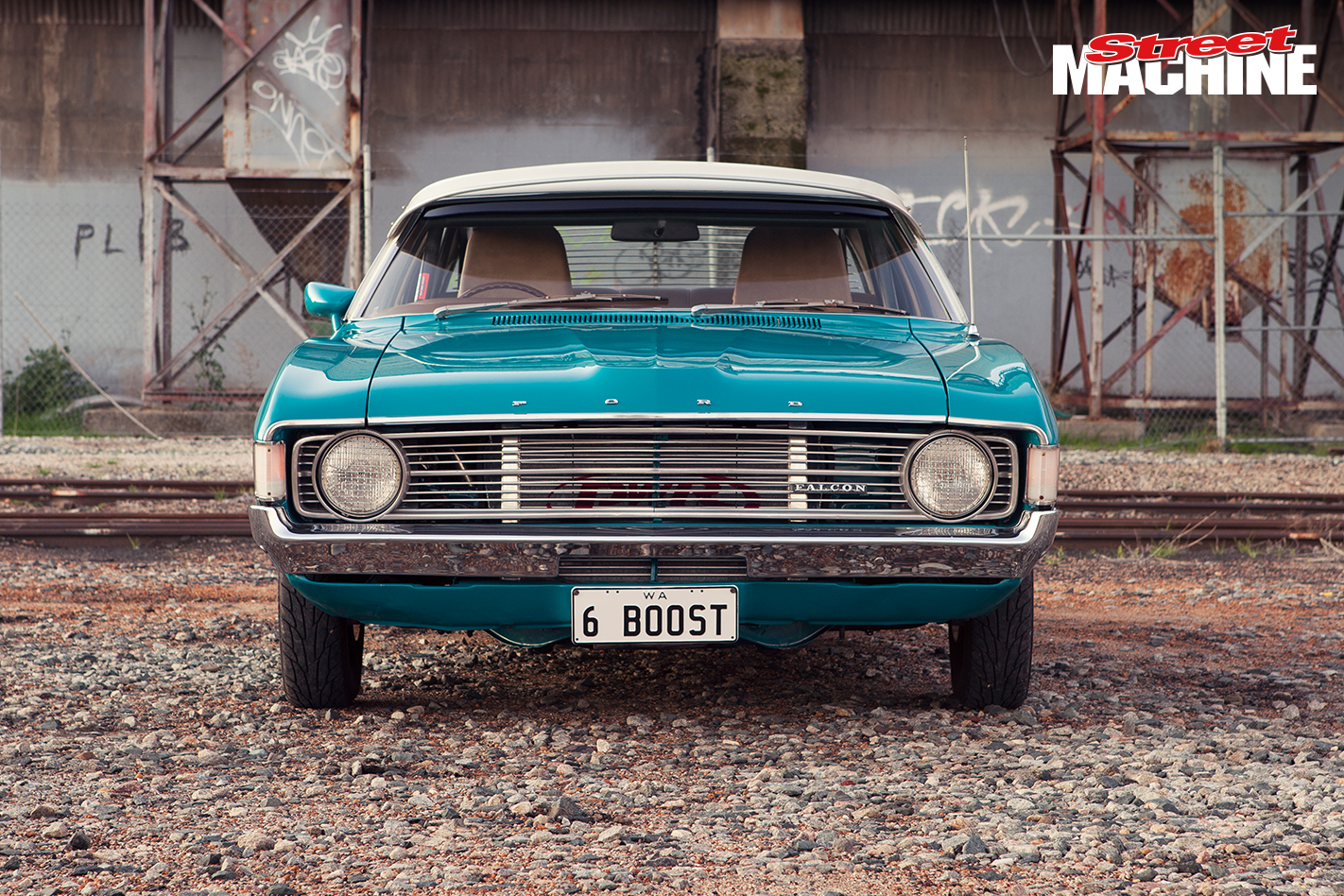 With the sun visor and mudflaps on, this turbo six weapon could almost pass as a sleeper

With a bit of buyer’s remorse kicking in, Duncan realised he probably should have run this by his missus before acting on impulse. He came up with a cunning plan though. “I rang the wife and said: ‘I’ve bought you a Falcon!’, to keep me out of the shit for buying another car!” he says. Turned out Karen loved the car, and the next day she drove it home. “That’s the first and only time she’s driven it,” Duncan says, “because after that I pulled it off the road.”

What followed was a three-year build to create the ultimate sleeper. “My original plan was to drop a V8 into her,” Duncan says. “But then we were sitting around having a few coldies and my mate suggested: ‘Why don’t you turbo six it?’ And I thought: ‘That’s not a bad idea.’” Soon enough, Duncan was having a lot of deep and meaningful conversations with Kyle from 6Boost on how best to make the XA go hard. 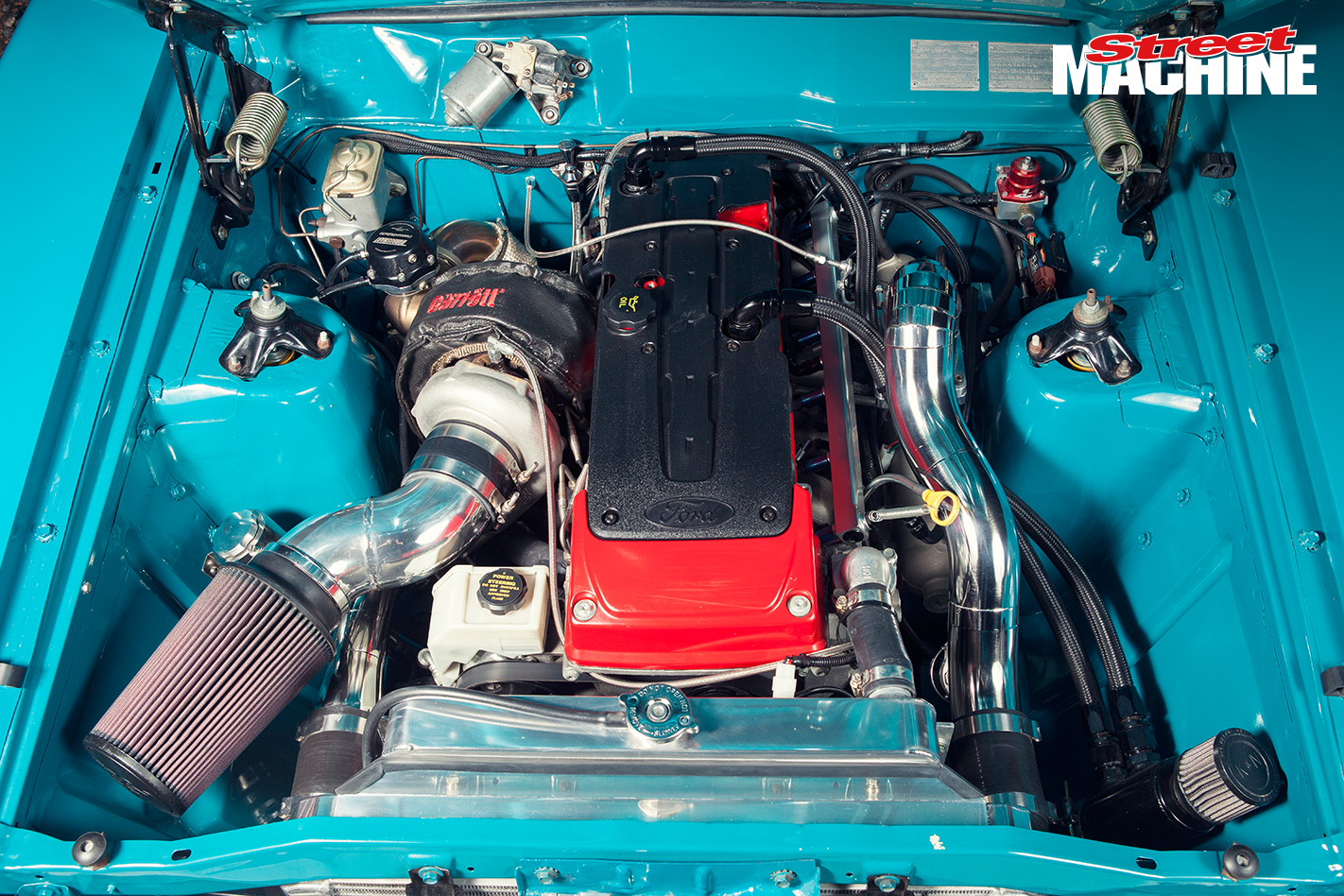 Clearly those conversations paid off: the XA now boasts 615hp at the wheels thanks to a basically stock FG turbo six running a Wilson throttlebody, Plazmaman fuel rail, ID2000 injectors and Precision 67/66 turbo. The heads have been upgraded with Plazmaman valve springs and head studs, while fuel is stored in a Process West surge tank and moved by twin pumps up front and an Aeromotive unit down back. The upgraded turbo is mounted on a 6Boost manifold and spits fumes out through a four-inch exhaust built by Andy Butler.

Backing up the big six is a Turbo 400 slushbox built by Peter Veersma and fitted with a TCE 4000 stall converter. Power feeds through to a venerable nine-inch out back running a set of Truetrac 3.25:1 gears. 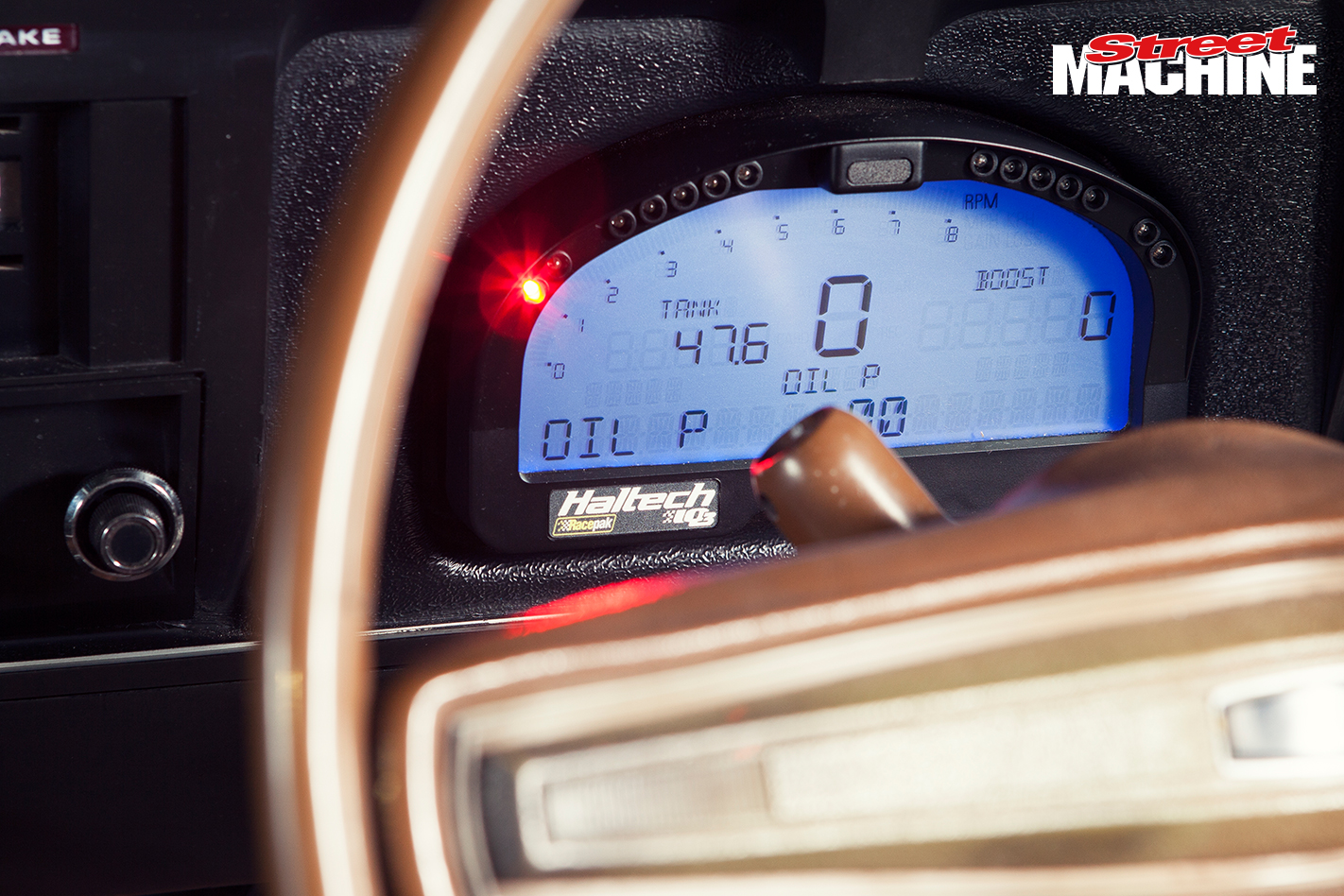 A Haltech Elite 2500 ECU manages all the electronic trickery, and Duncan credits Dave and Tristan at WTF Auto with sorting the wiring and tuning.

Following the fabrication and installation of a set of mini-tubs out back, Duncan had good mate Jeff Baker handle the engine conversion. No big dramas there: “We had to change the engine mounts and extend the crossmember for the ’box, but nothing major,” Duncan says. “Just moved her right back and it sat in there pretty easy.”

Duncan did concede that the old front drum brakes just weren’t going to cope with the extra power, so they were upgraded with a disc conversion from Hoppers Stoppers. There’s still no power booster though. “They work fine,” he says. “You just need to press the pedal a bit harder.” 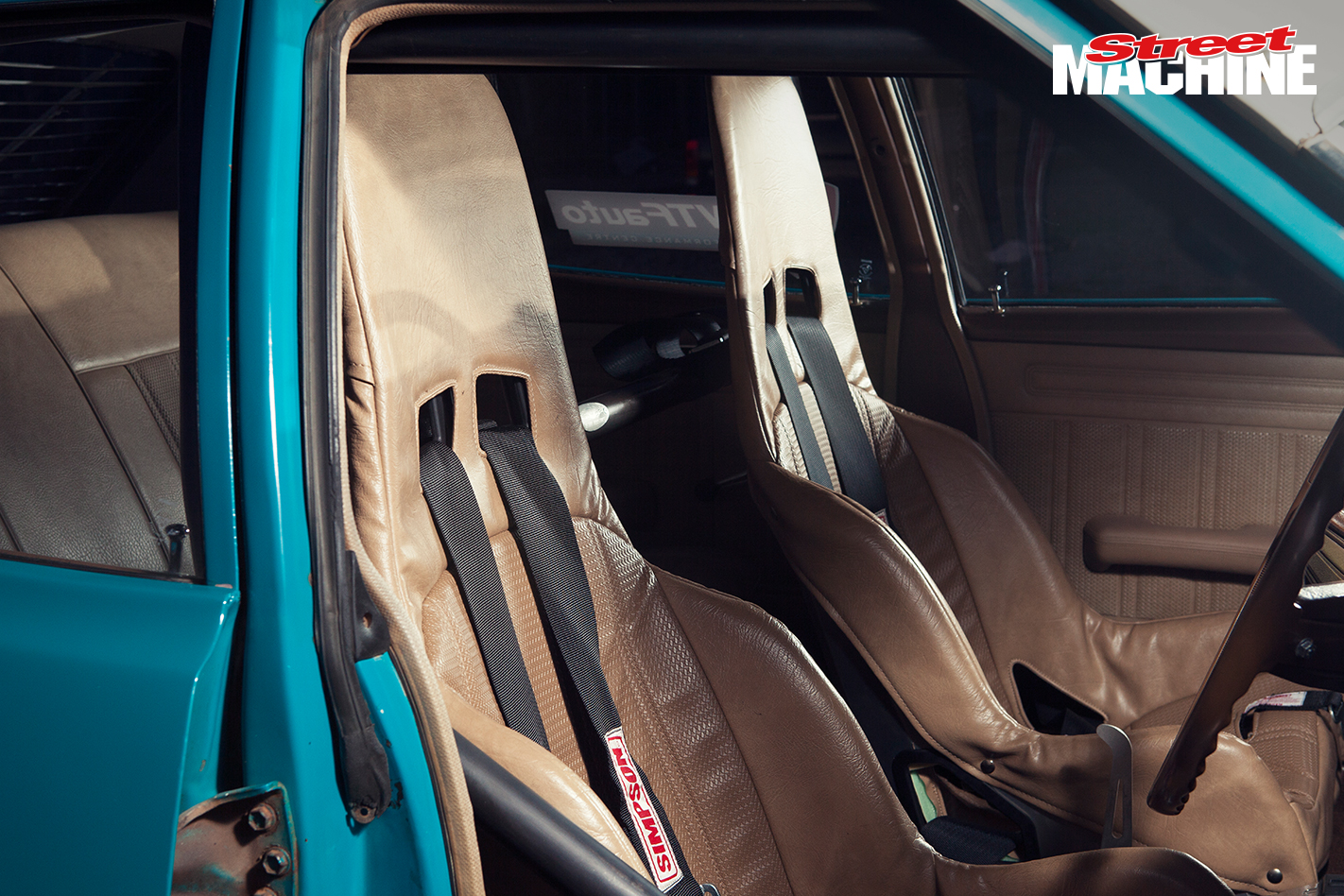 The front race seats are a very cool touch, trimmed to match the beige grandpa-spec of the rest of the interior

On the inside, Duncan installed a pair of Kirkey front race seats and had them trimmed by Trimcare to match the rear. It’s a cool effect – kind of how a factory drag car might have looked if it was on the option list back in ’73. For safety’s sake, there’s also a set of Simpson harnesses and a six-point rollcage.

So far Duncan has mainly invested in the mechanical aspects of the car. “The body is no showpiece,” he says. “I only painted the engine bay and the front guards and had some shopping trolley dents removed. I just wanted to get it going and maybe look at panel and paint down the track.” 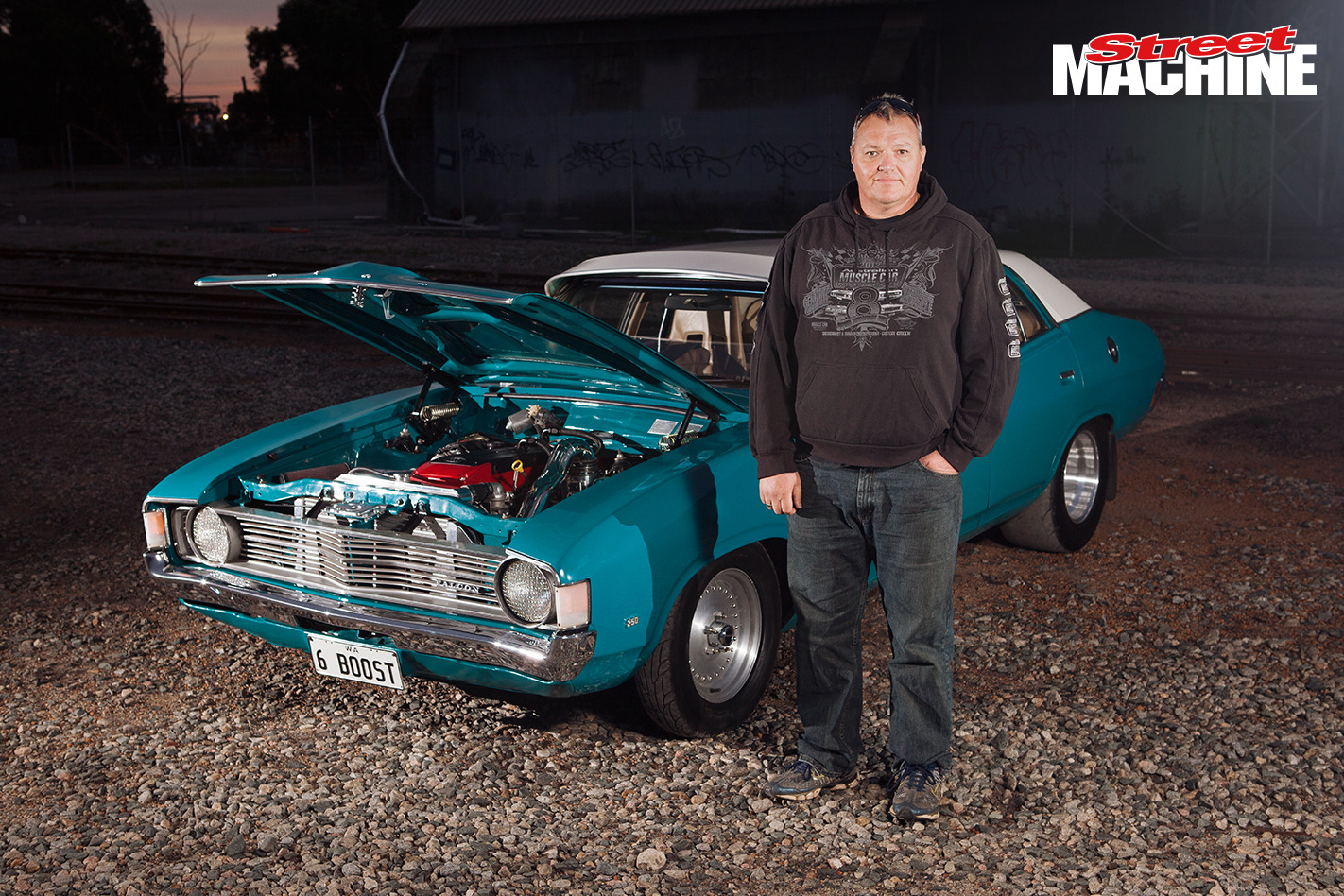 Duncan also has a ’62 Pontiac in the shed, but right now he’s having too much fun driving the Falcon. Not that surprising when you hear it runs a 9.66-second ET at 139mph and lifts the front wheels! Hence the ’chute hanging out the back. “I haven’t needed to use it yet,” he says, “but you’ve gotta have a ’chute doing 140mph, and it’s done 139.1.”

And there’ll be more where that came from. “The next thing will be to build a stronger bottom end, slap on a bigger turbo and wind the boost up,” Duncan says, “and maybe look at cracking an eight.” Sounds like happy days ahead for this blend of the best of old and new. 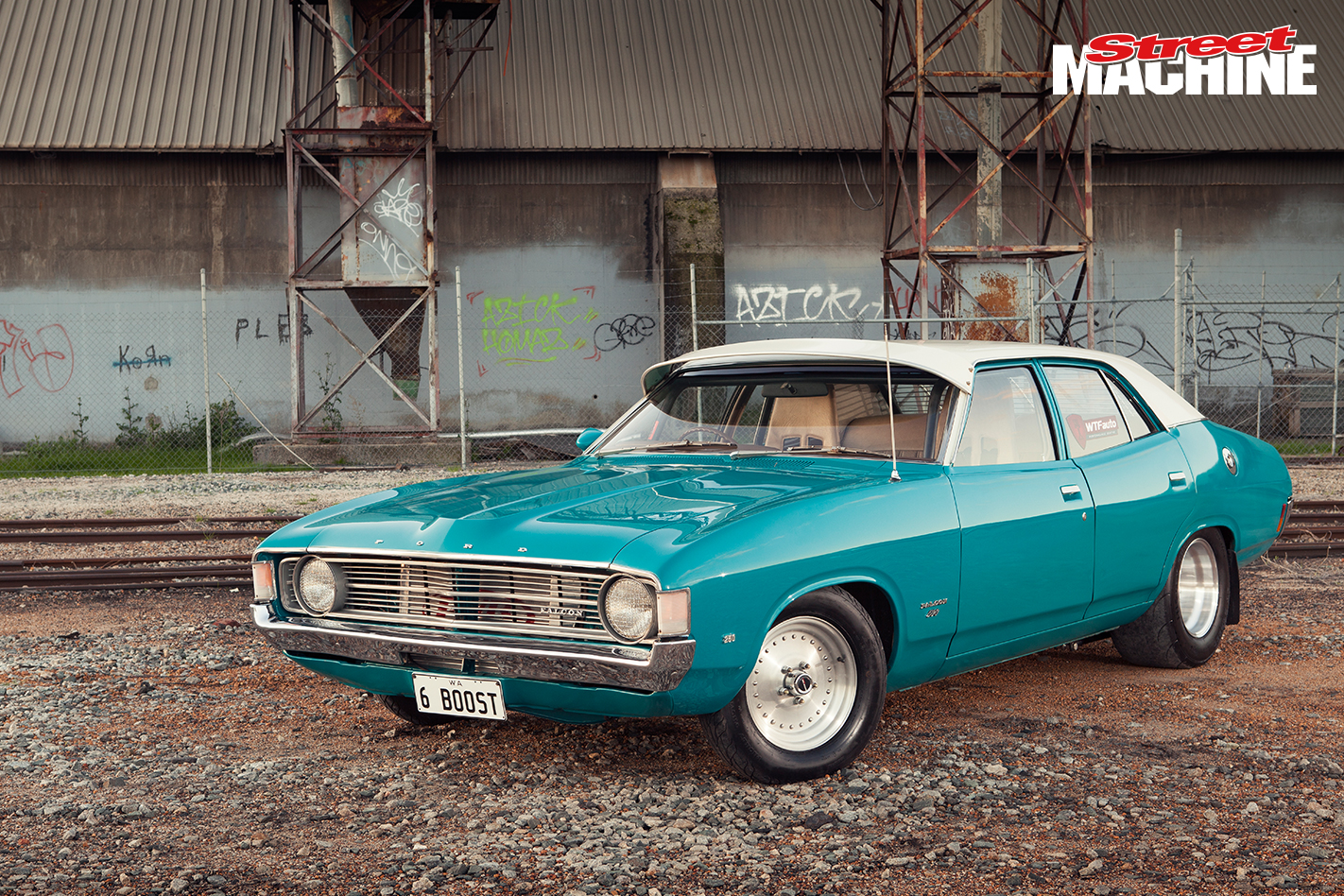 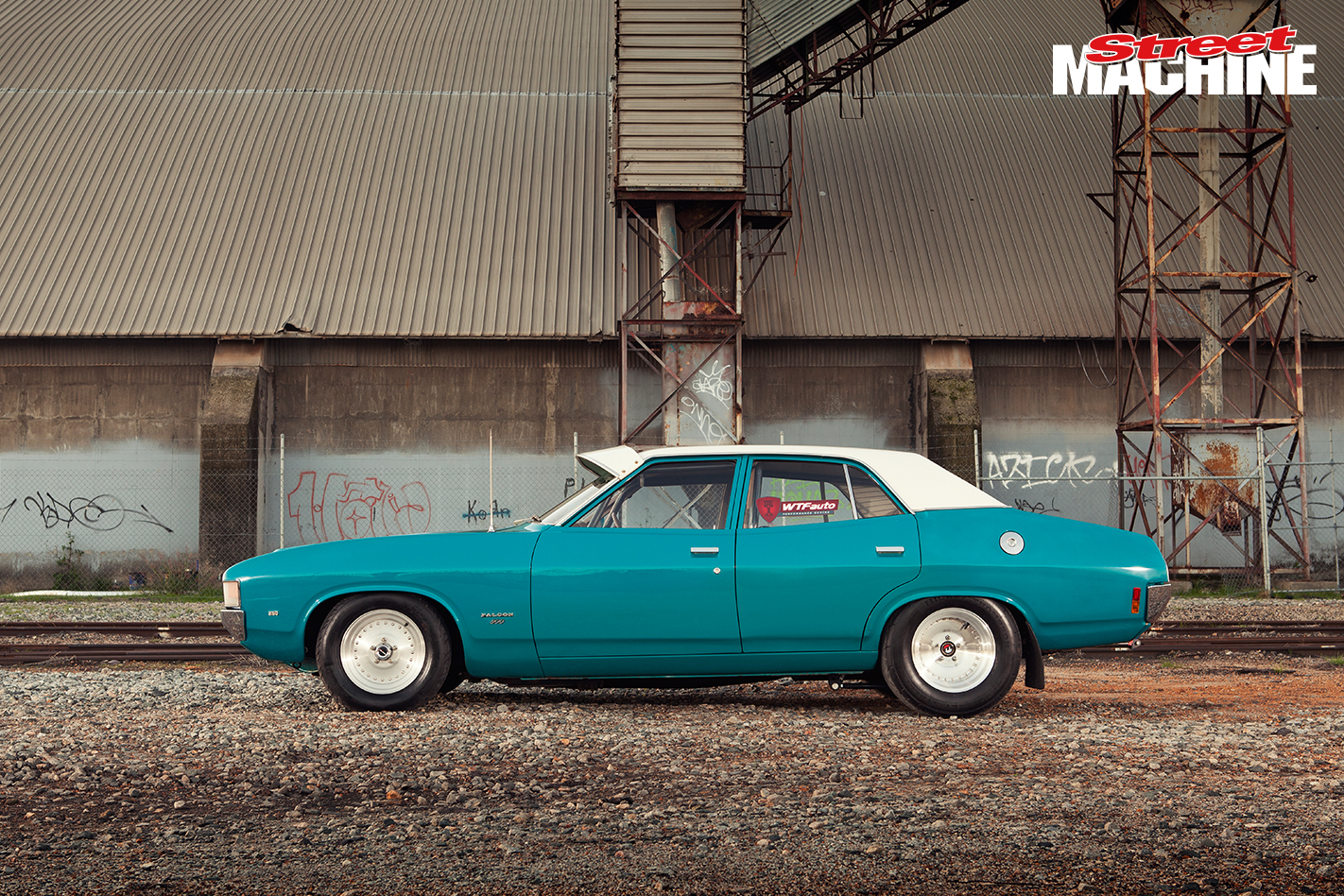 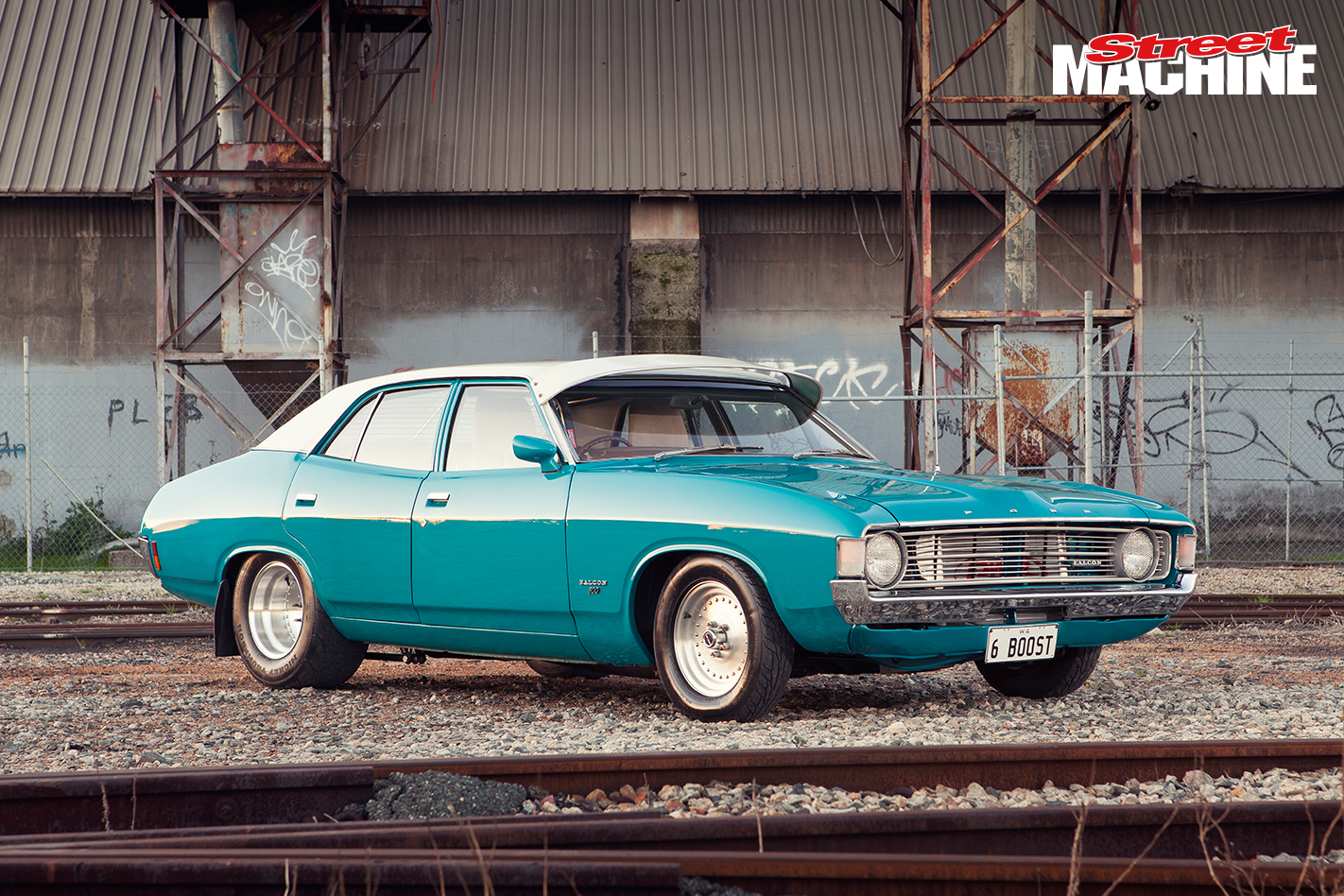 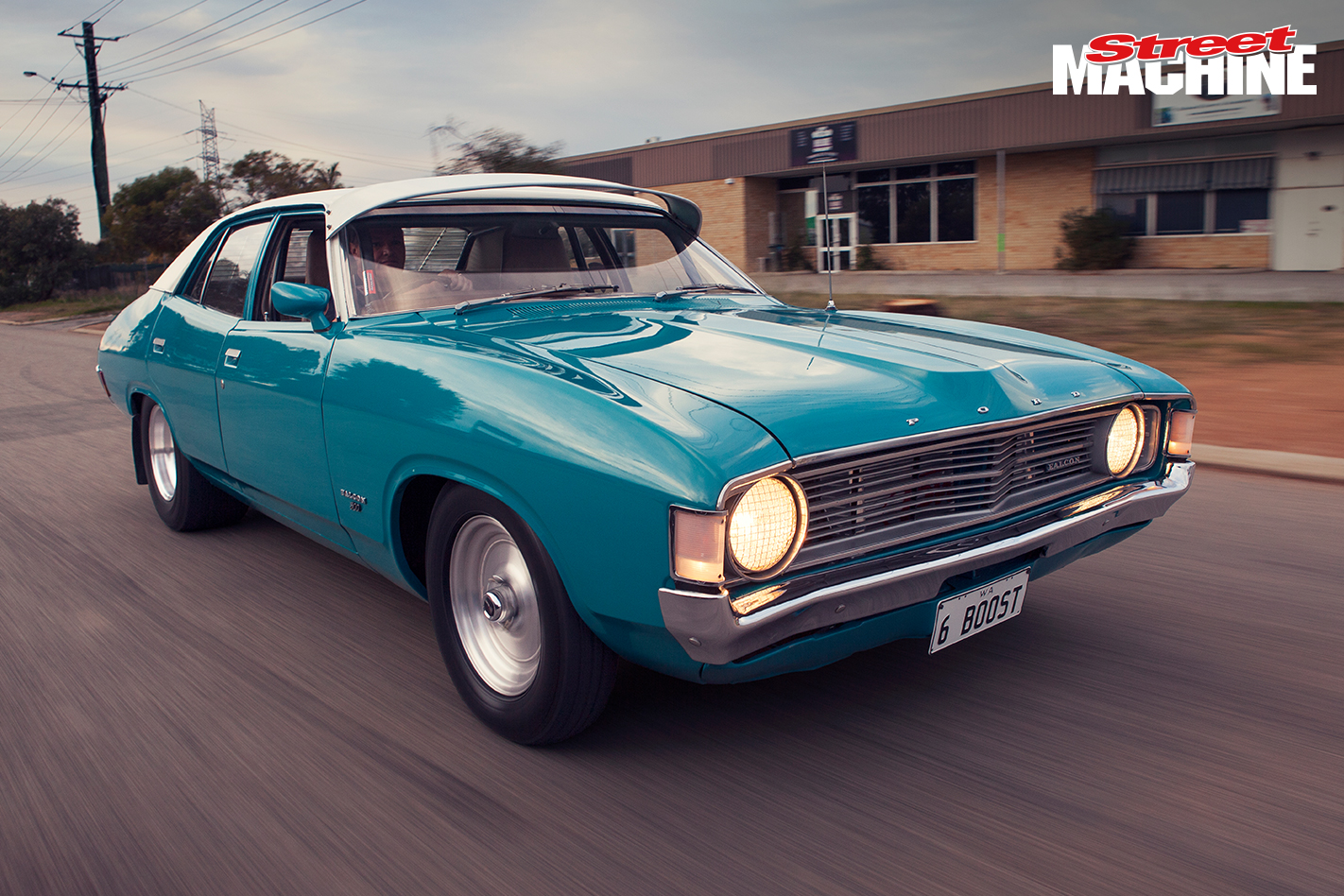 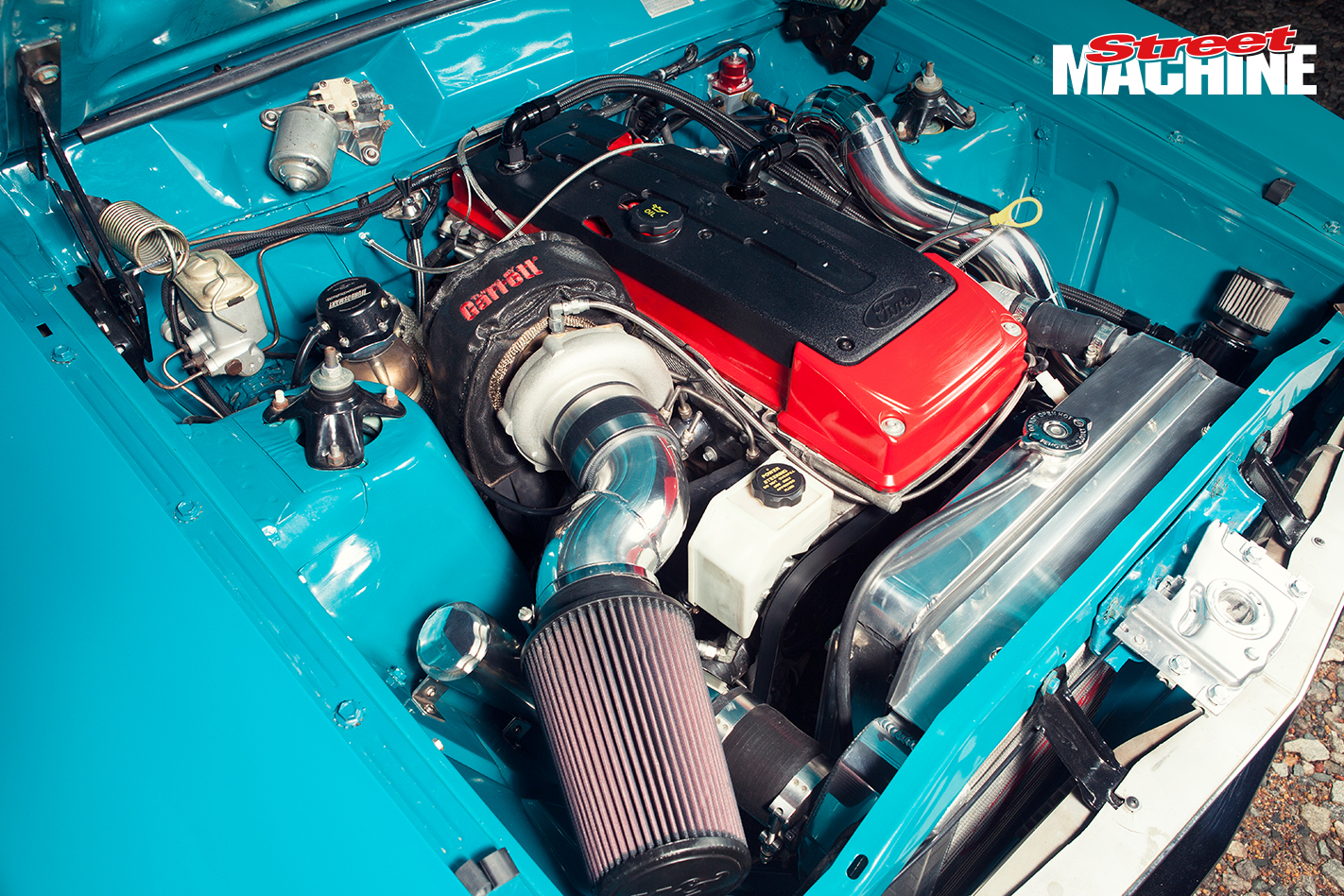 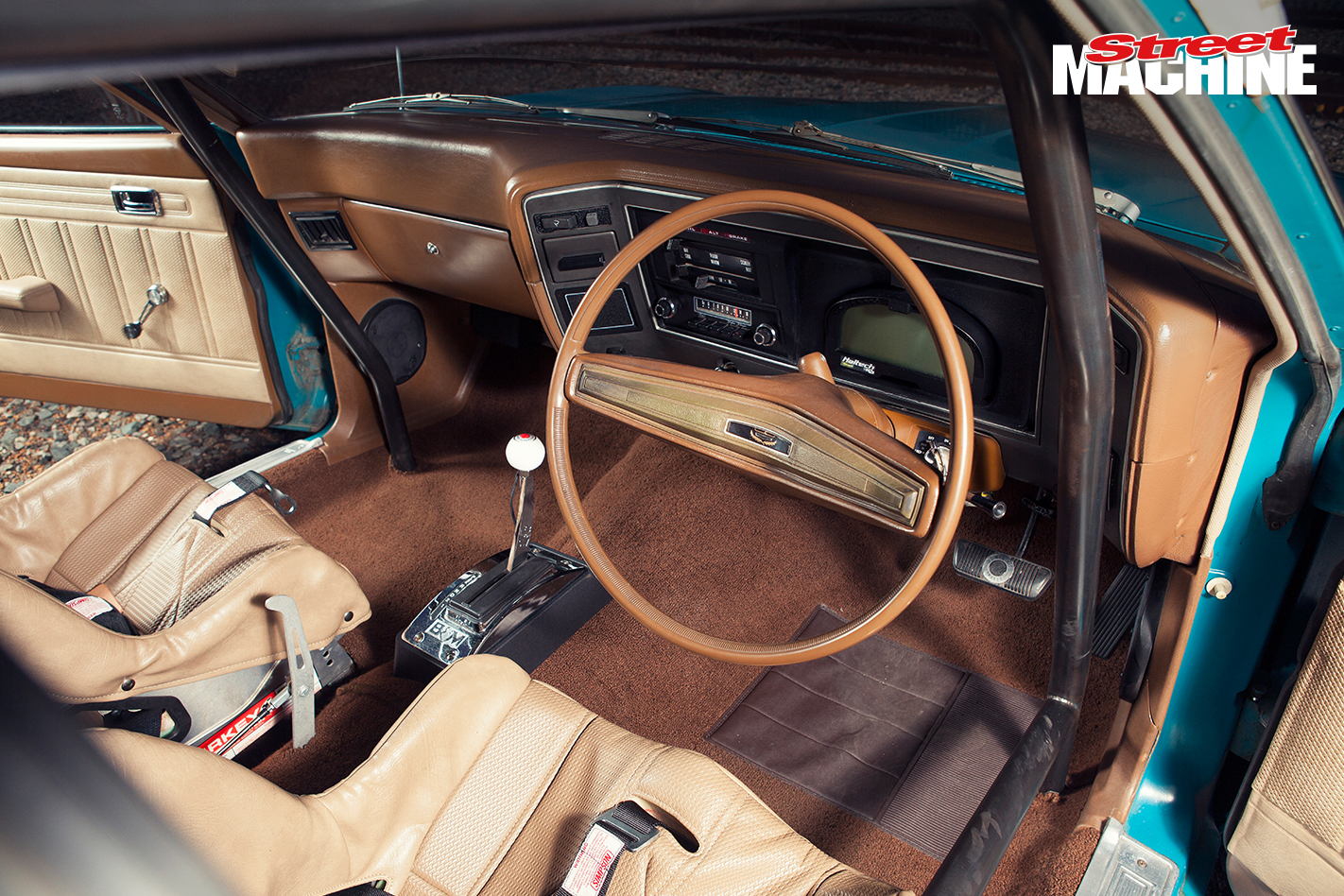 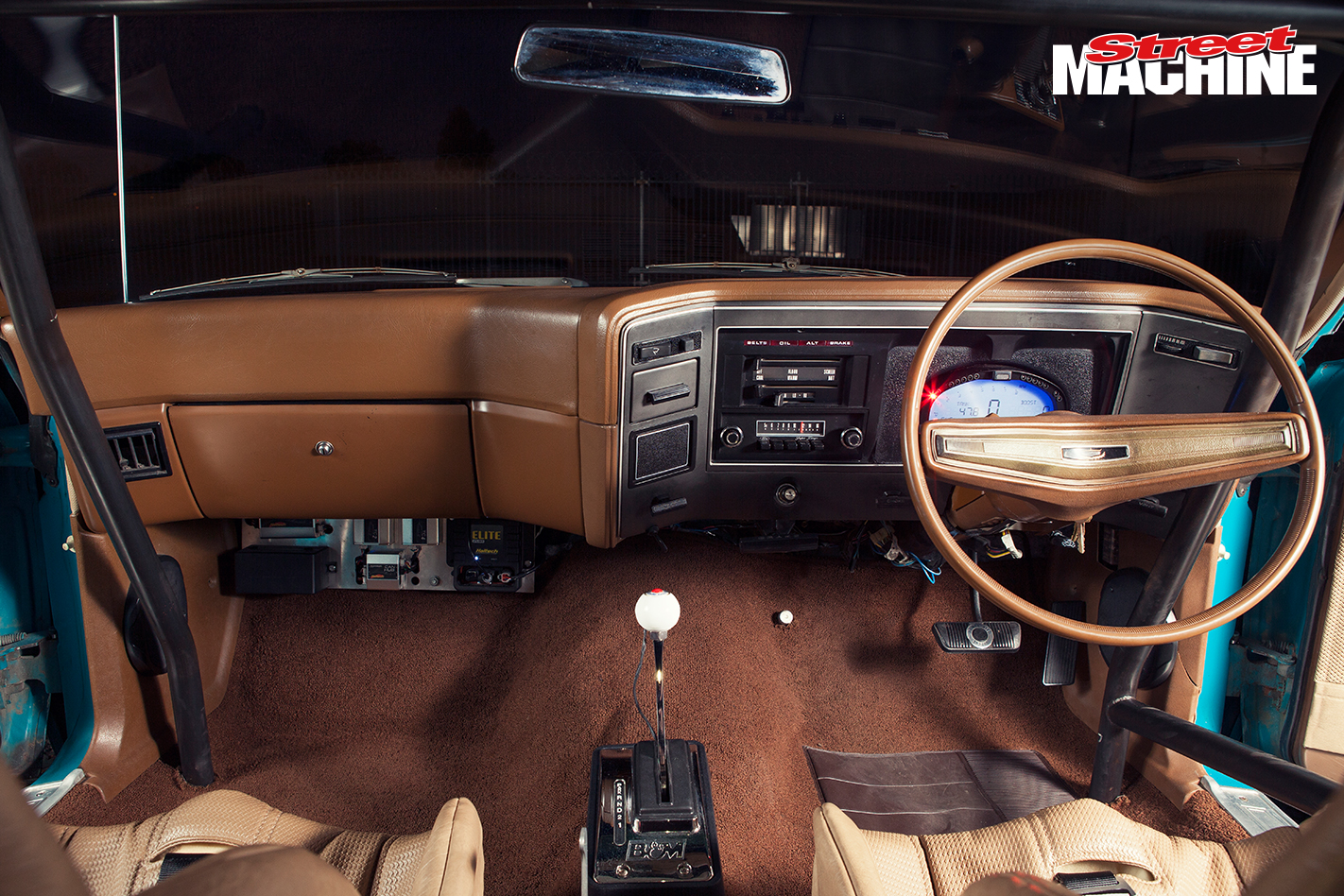