JAPANESE classics tend to fall into two categories: minty nanna-spec cars and clapped-out shitboxes. But Justin and Mandy Strickland saw a third category, one we’re all familiar with: ‘street machine’. Working together, the couple have made their vision a reality.

‘Street machine’, ‘four-cylinder’ and ‘Japanese’ are terms not generally uttered in the same sentence, but for those who love their Oriental tin, it’s not that huge a leap. All the basics of street machining are there: classic styling, chrome bumpers and rear-wheel drive, and while the former is subjective, the latter two are never in dispute. 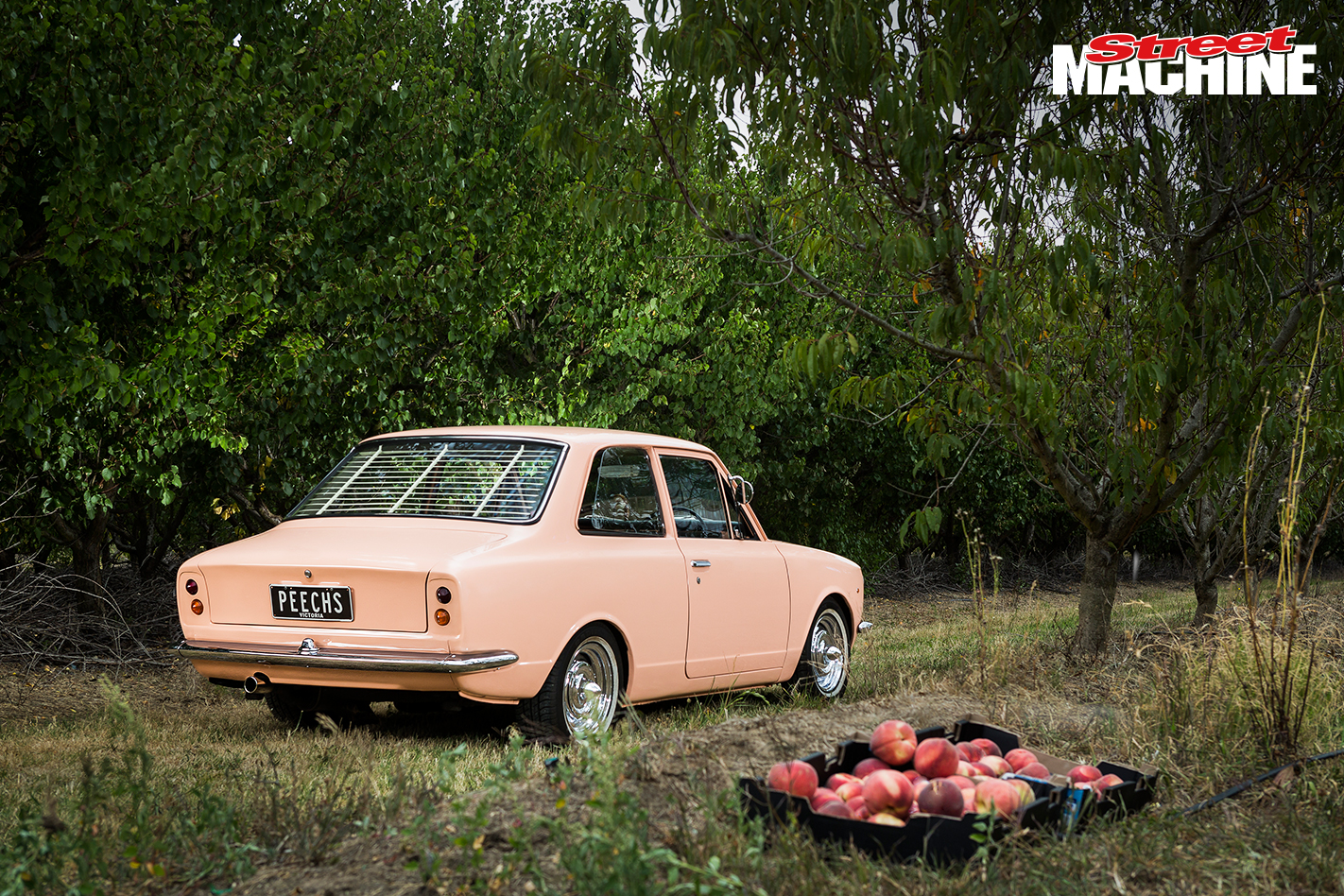 Custom tail-lights give PEECHS a distinctive look from behind. Originally Justin wanted Cadillac lights but they wouldn't fit

Justin has had a long history with Toyota’s first Corolla, having owned about a dozen since he could first twirl a tiller. Fittingly, he was rocking a tidy white KE10 with a fuel-injected 4K and Simmons B45s when he met Mandy. Keen to see the world together, Justin flipped it for travel money and the couple set off.

Fast-forward a couple of years, and with the trip now well behind them, Justin and Mandy found they missed the little KE10, so for the princely sum of $300, the Stricklands sourced a unit tidy enough to drive home. 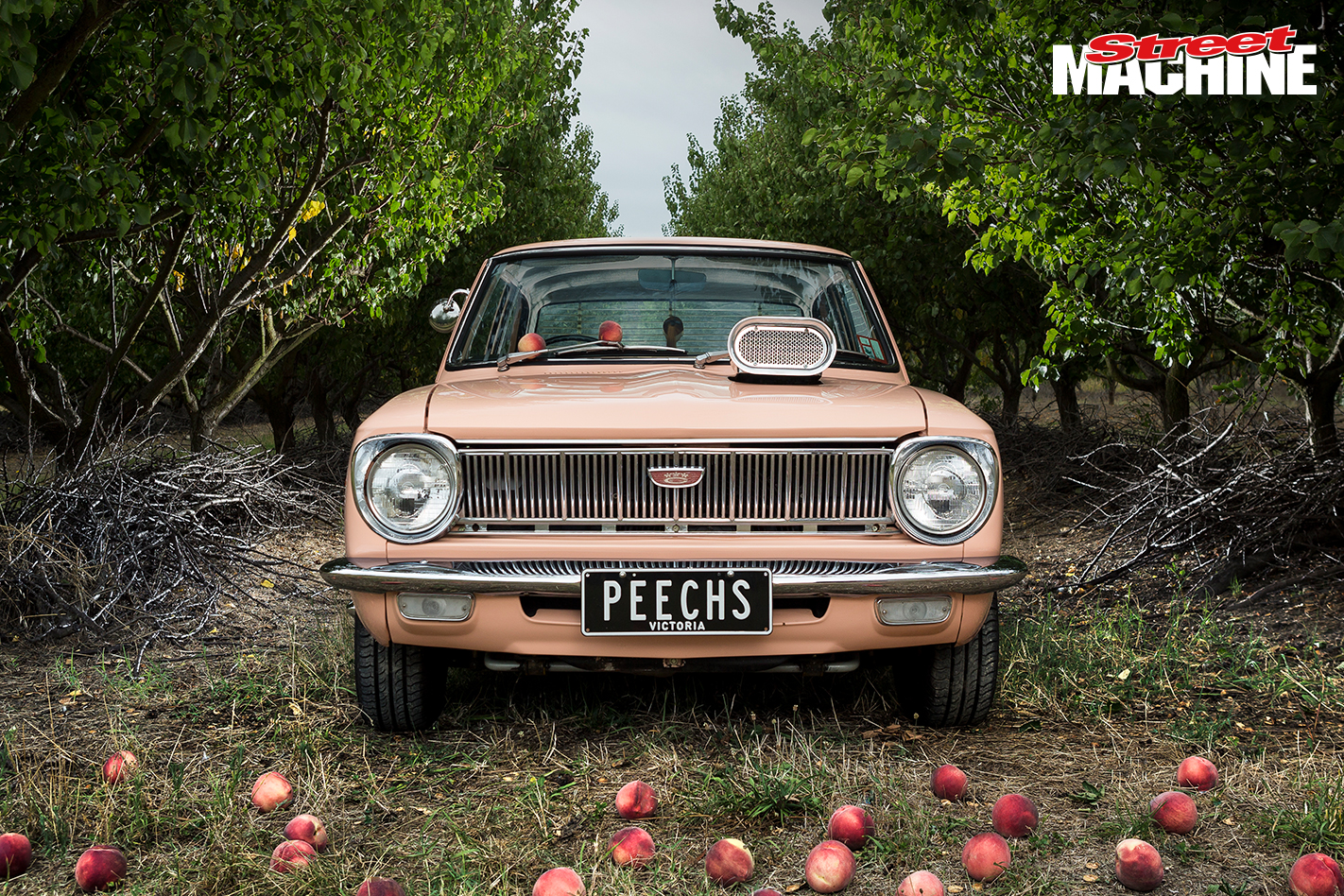 From the outset, PEECHS was always going to have blower gear sticking out of the bonnet reckons Justin

Being hot-rodders at heart, the couple weren’t interested in a nanna-spec stocker; almost immediately they began to take it to the next level, stripping the Corolla together in their carport.

As money permitted, Mandy lugged the panels to a media blaster one at a time. It was challenging in more ways than one: “She was driving a CC Lancer coupe at the time!” Justin laughs.

Although Justin is a mechanic and exhaust fabricator by trade, he wasn’t keen on attacking the bodywork himself. “I’d just blow holes in it,” he admits. Instead, he entrusted the work to mate Dave Ward. “He was taught by an old bloke and has some great old-school skills that come with that,” Justin explains. 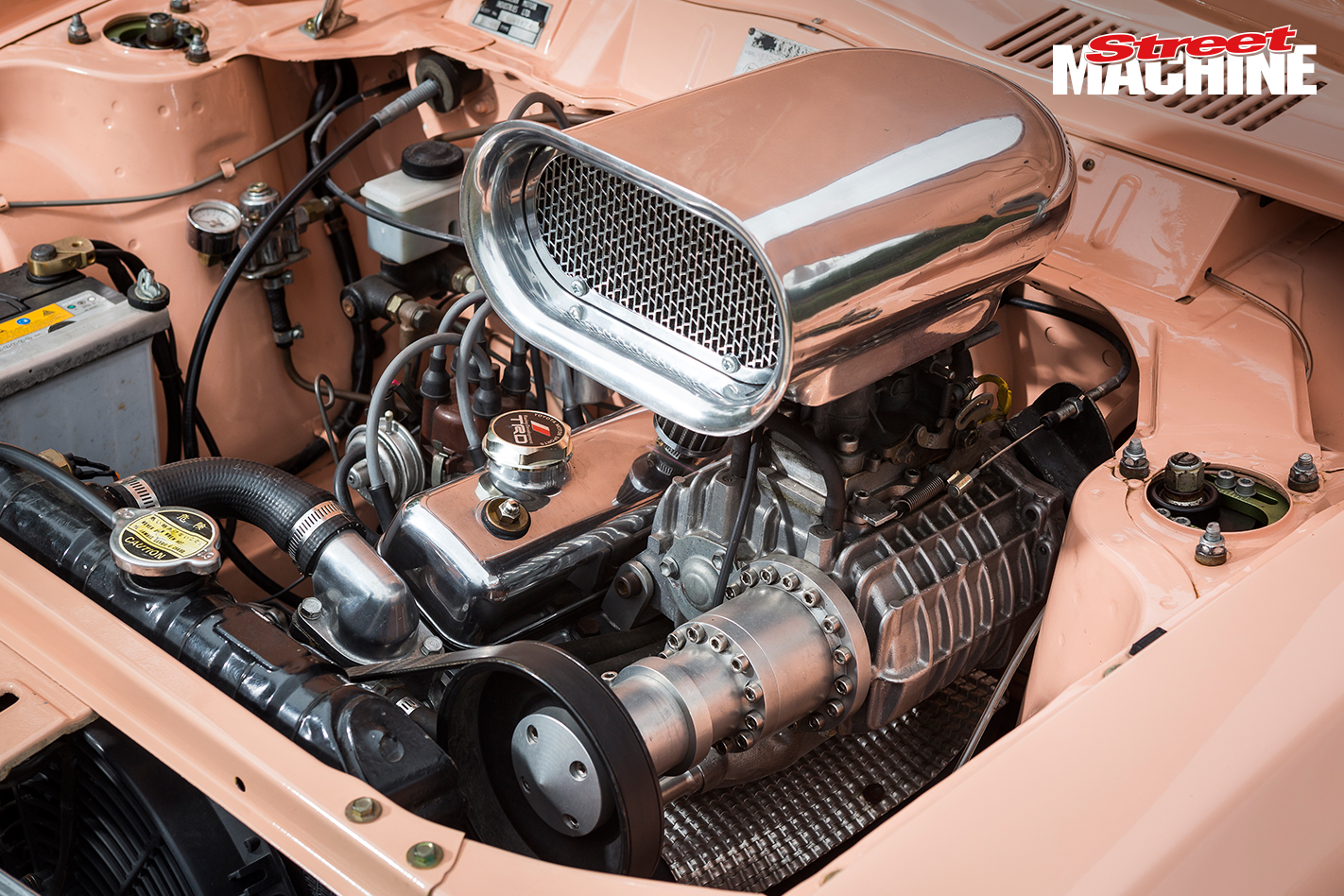 Under the bonnet is a 1500cc Toyota 5K motor with a custom intake and Toyota Tarago supercharger!

Like Mandy, Dave worked on the Corolla one panel at a time. Justin suggested a few custom touches along the way; Dave rounded the door corners, deleted the chrome mouldings, modified the front blinker holes to fit Fiat 124 lenses and filled the C-pillar vents.

Body mods weren’t limited to the custom stuff. The KE10 Corolla came in two series, and although PEECHS is the later 1969 model, Justin preferred the earlier version, featuring a cleaner grille, different front apron and white indicators. Unfortunately it was not a bolt-on swap. “All the mounting points were different,” Justin says. “It was really annoying as the car had already been painted!” 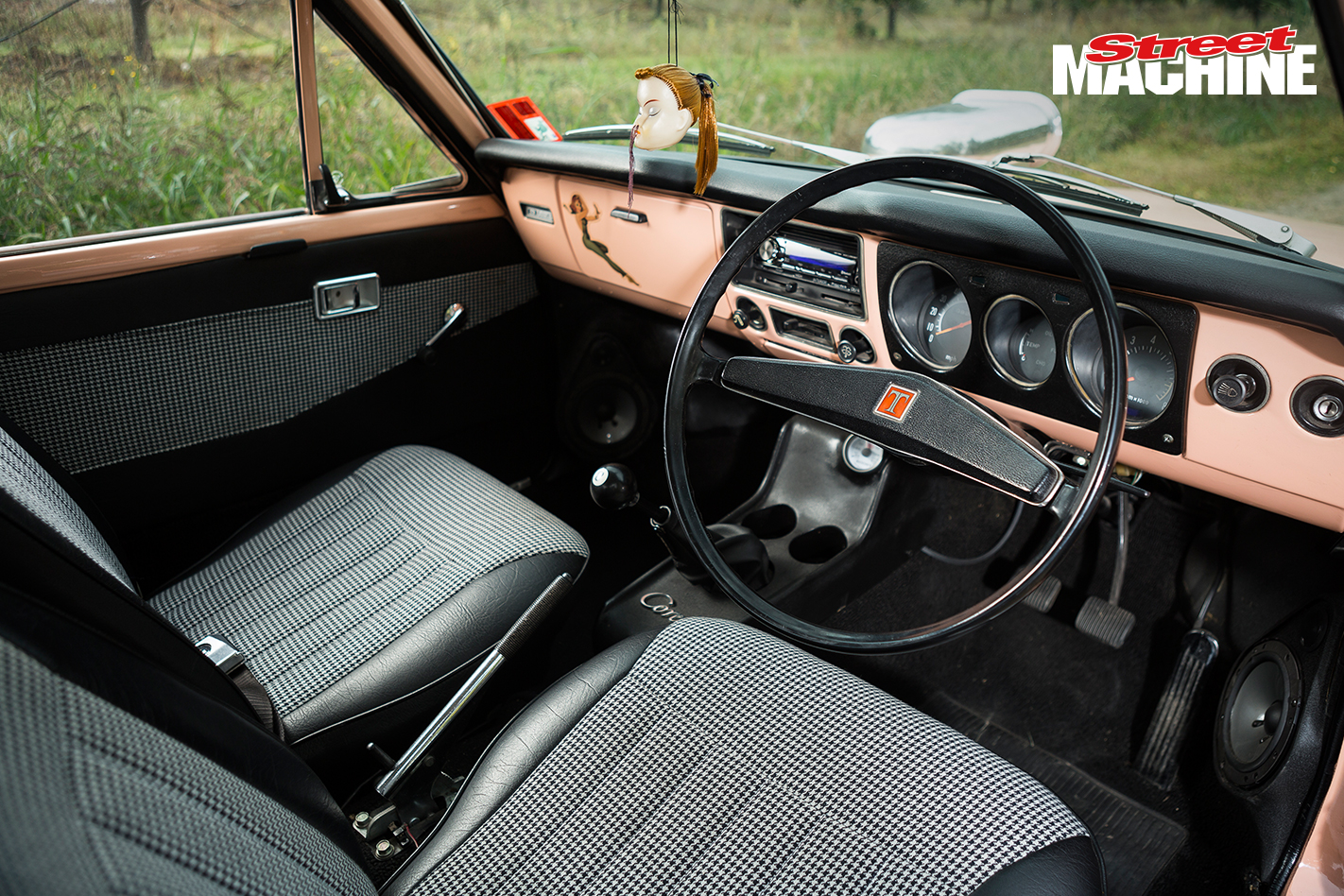 Despite looking standard, the interior is full of neat touches - the seats include Monaro-inspired houndstooth inserts and the gauge cluster is from a KE15 Sprinter

Working on something a bit outside the box means that go-fast bits don’t flow so readily from the internet. Still, while Justin’s KE10 is never going to hit a Powercruise, it had to be fast enough to get out of its own way. 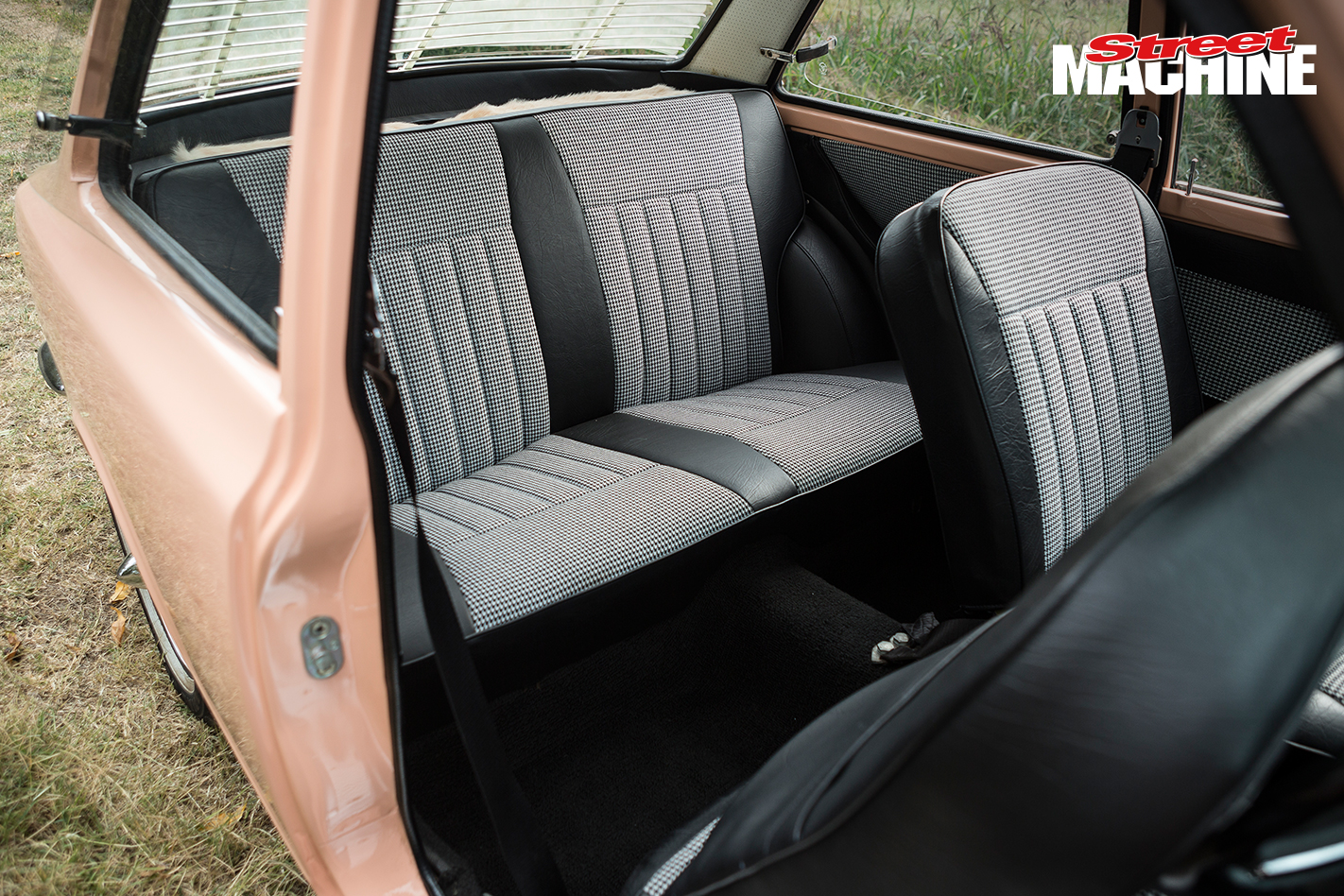 Enter Rodney Horton of Head Stud Development, who has been building fast K-series motors for over 20 years. He was able to sort out the inlet manifold and port the bejesus out of the HiAce-sourced 5K’s head, as well as balance the internals and make all the brackets for the blower belt. Rodney also fabricated an extended housing for the supercharger and an adaptor for the Weber carburettor.

“I did the easy stuff like the accelerator cable!” Justin laughs. Still, as owner of Ferntree Gully Midas, he knows his way around more than just cables. He fabricated a sweet set of tuned-length extractors and a 2.25in pipe with a stainless Magnaflow muffler; in fact his work has made him a go-to guy for hottie exhausts, Corolla or otherwise! 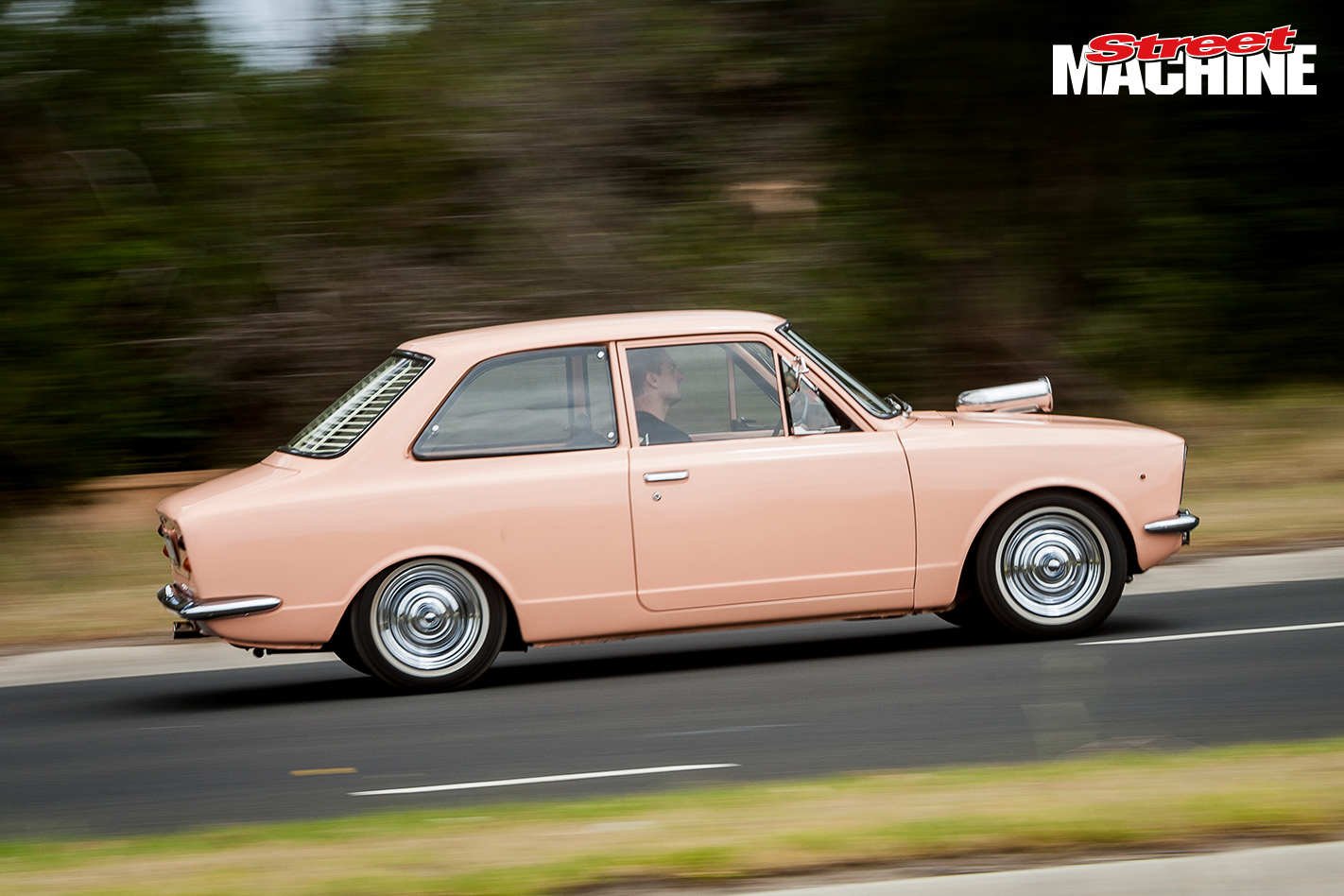 The LSD diff was easy too, but only with some dumb luck. Justin had built a sick rear end for the white Corolla he’d sold to go overseas; it featured a rare Celica LSD, cut-down axles and had been rebuilt with a set of genuine clutch packs sourced from Japan.

Sometime after his return, Justin discovered the white car they had loved so much had been stolen and written off. The current owner was parting it out, so Justin was able to re-purchase the rear axle on the cheap and install it in PEECHS. Problem solved for about 60 bucks! 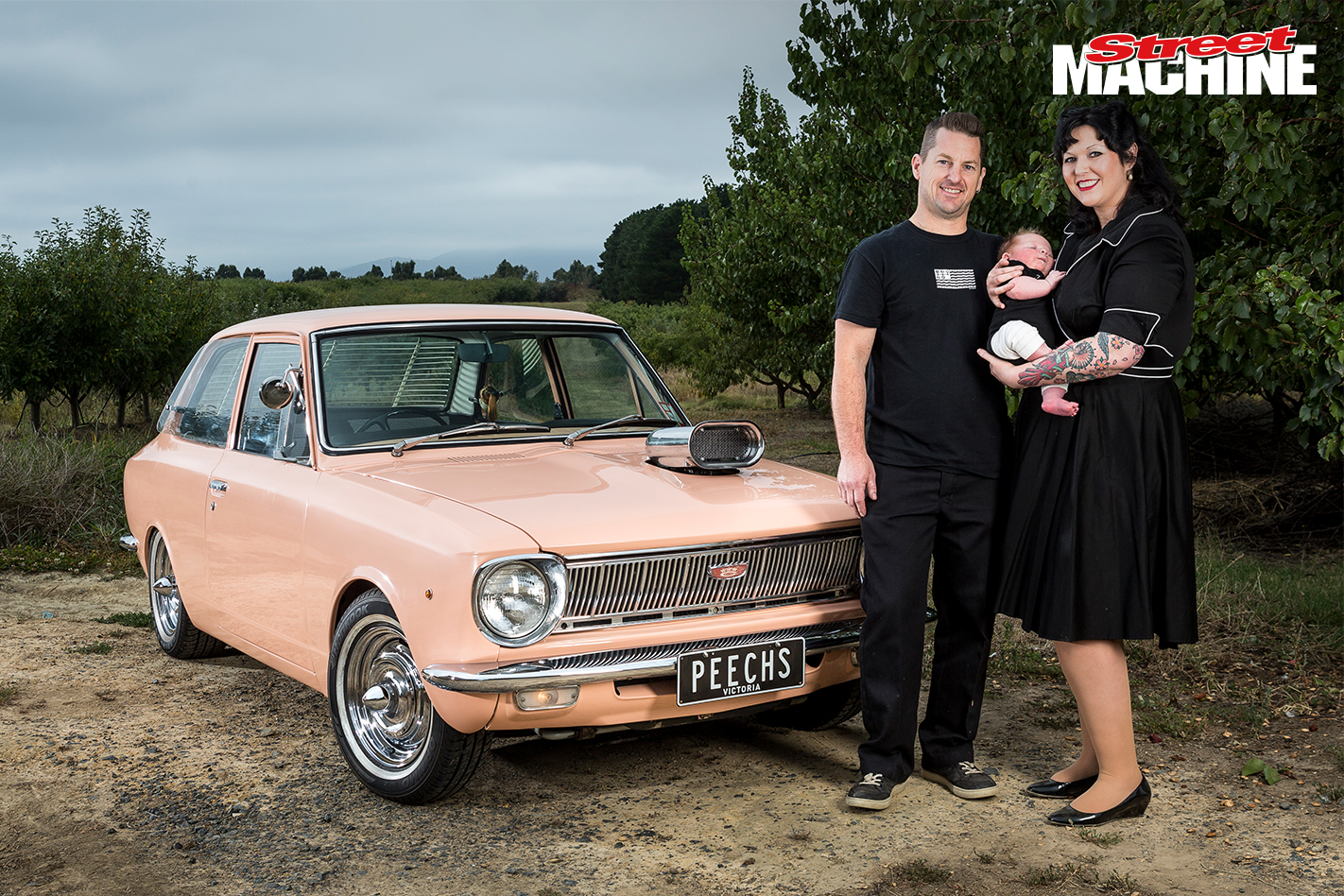 Front suspension is by custom coil-overs with Koni adjustable shocks, the rear rides on reset leafs

Hanging off each axle is a set of dressy Mazda 808 rims; chromed and fitted with bullet centre caps, the rears were widened to a staggering 13x6in. Look out!

Justin and Mandy have been rarely seen out of the KE10 since it hit the road, and despite starting a new family, their car-building days aren’t over just yet. “I’ve got a Hillman Super Minx Estate waiting for some attention,” Justin reveals, adding that he has plans to turbo the old wagon. “And I’m keen to build a 1938 Austin Ten rod with a Rover V8!”

But next up, Justin wants to build a KE70 daily driver with air con: “I hate new cars!” 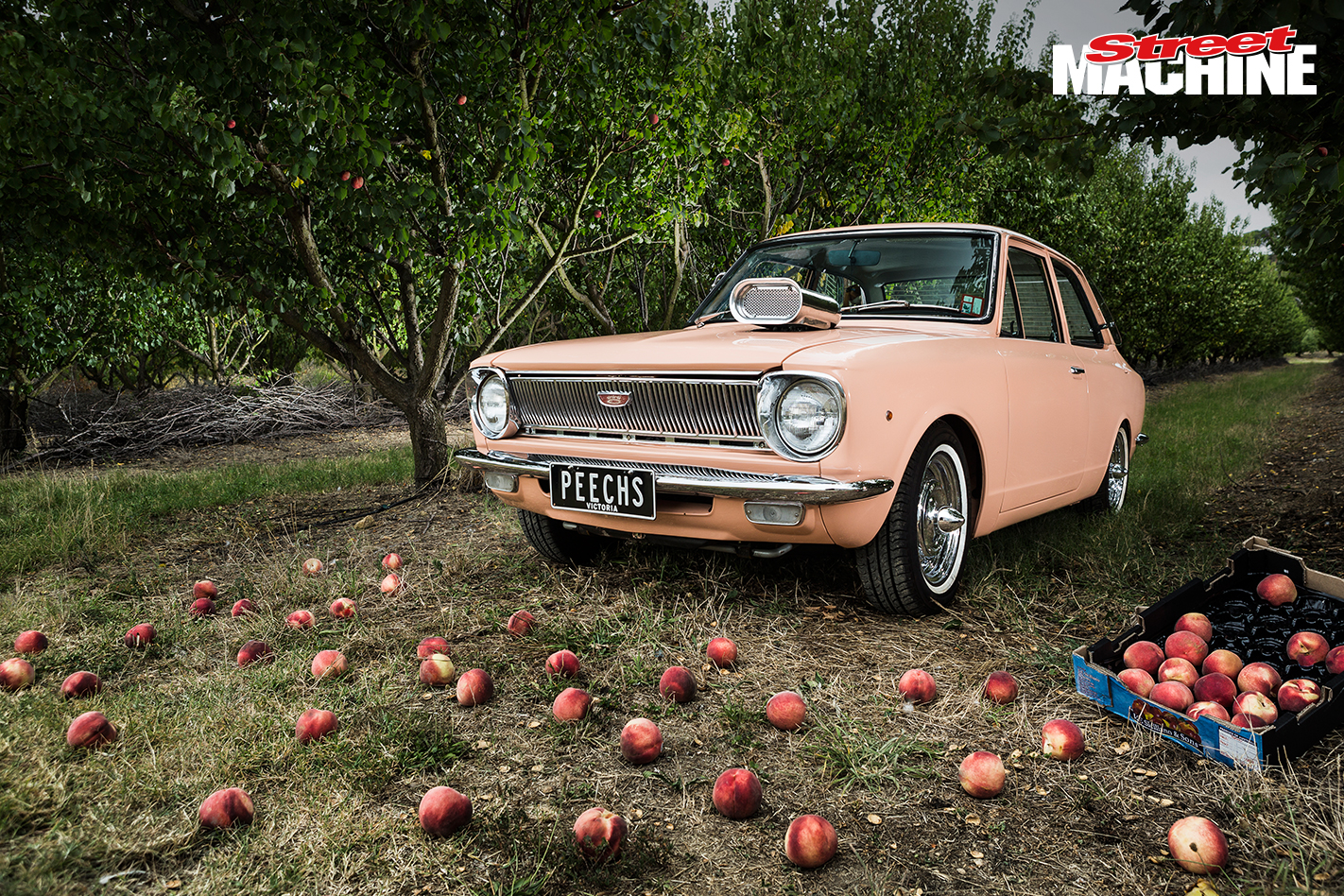 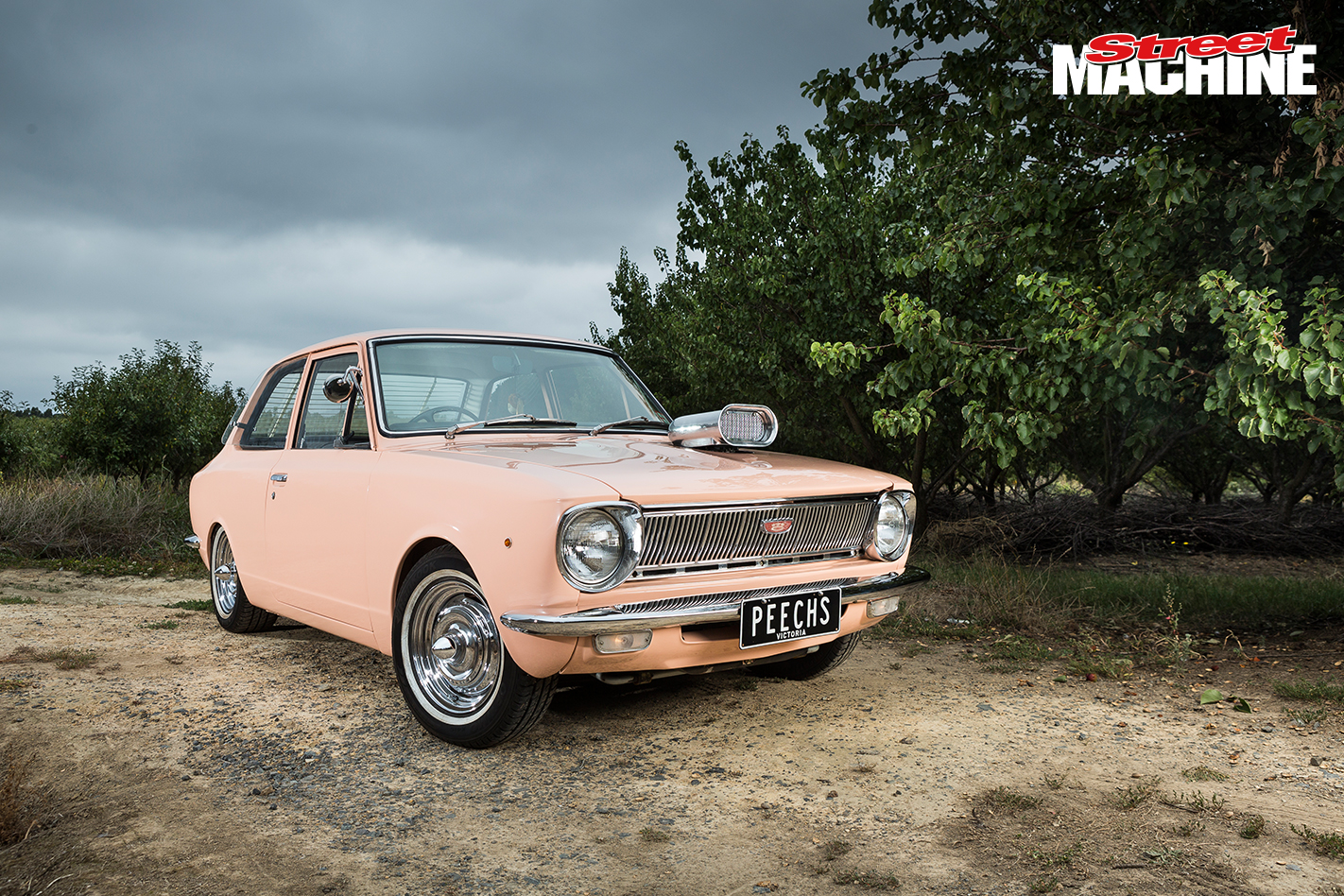 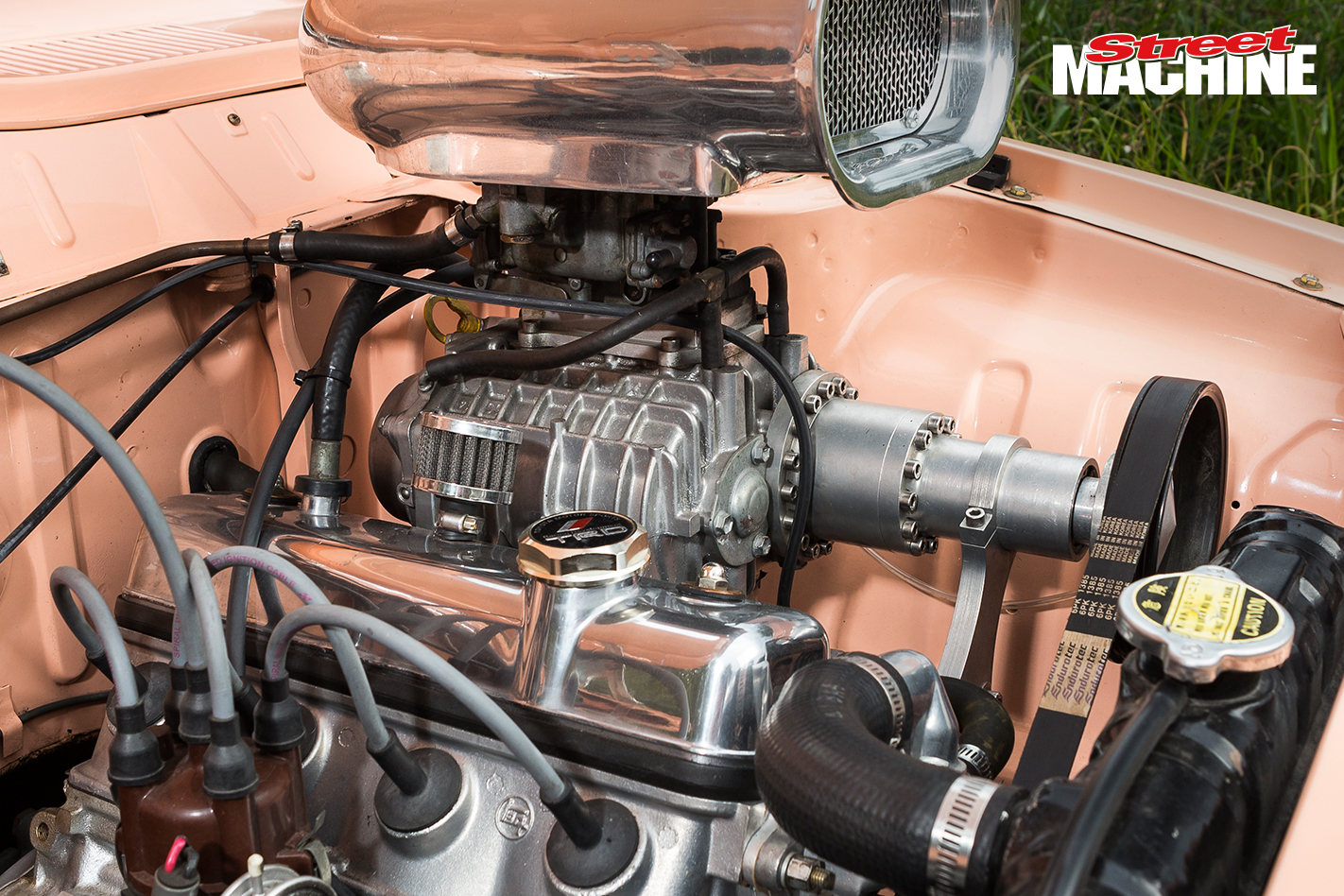 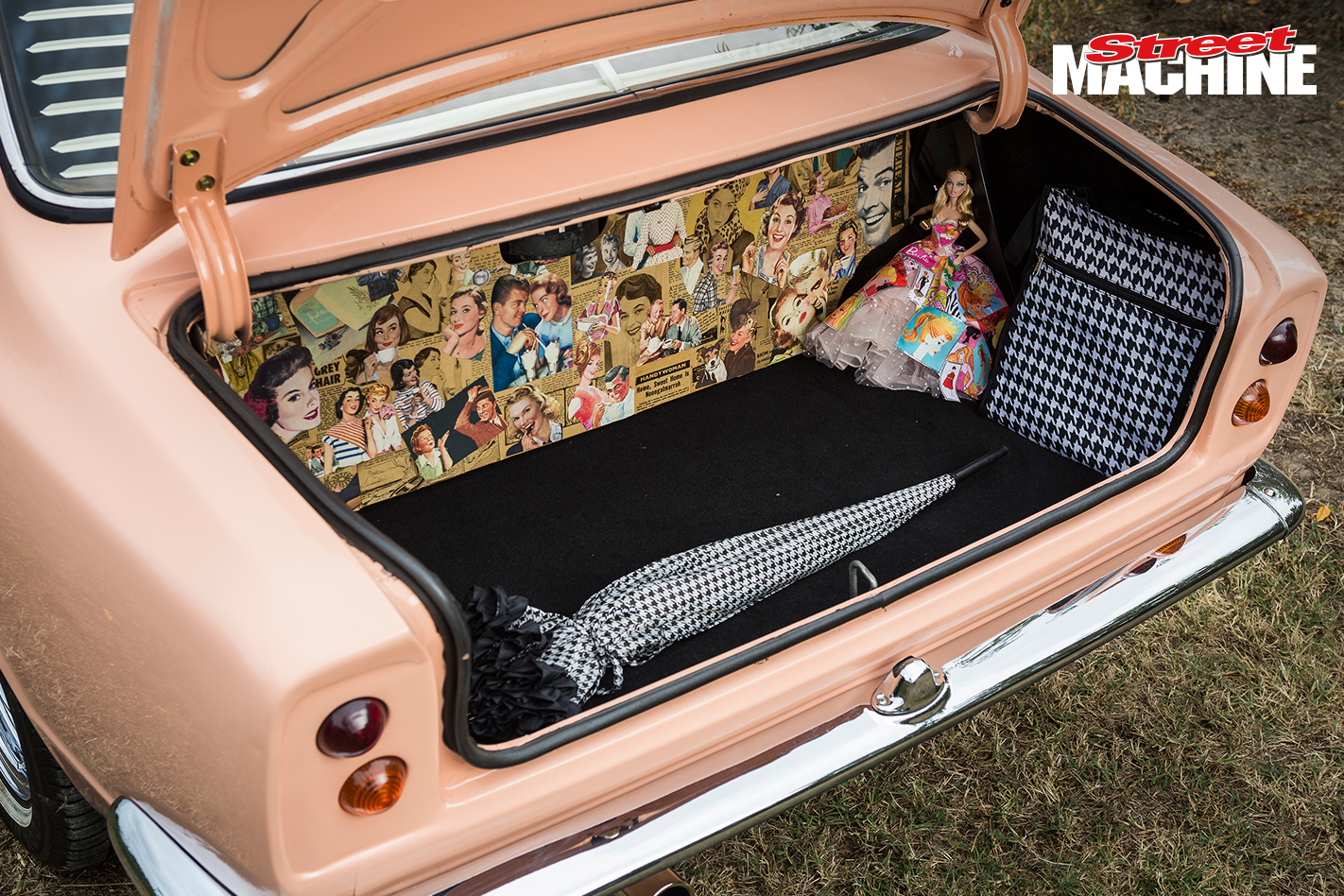 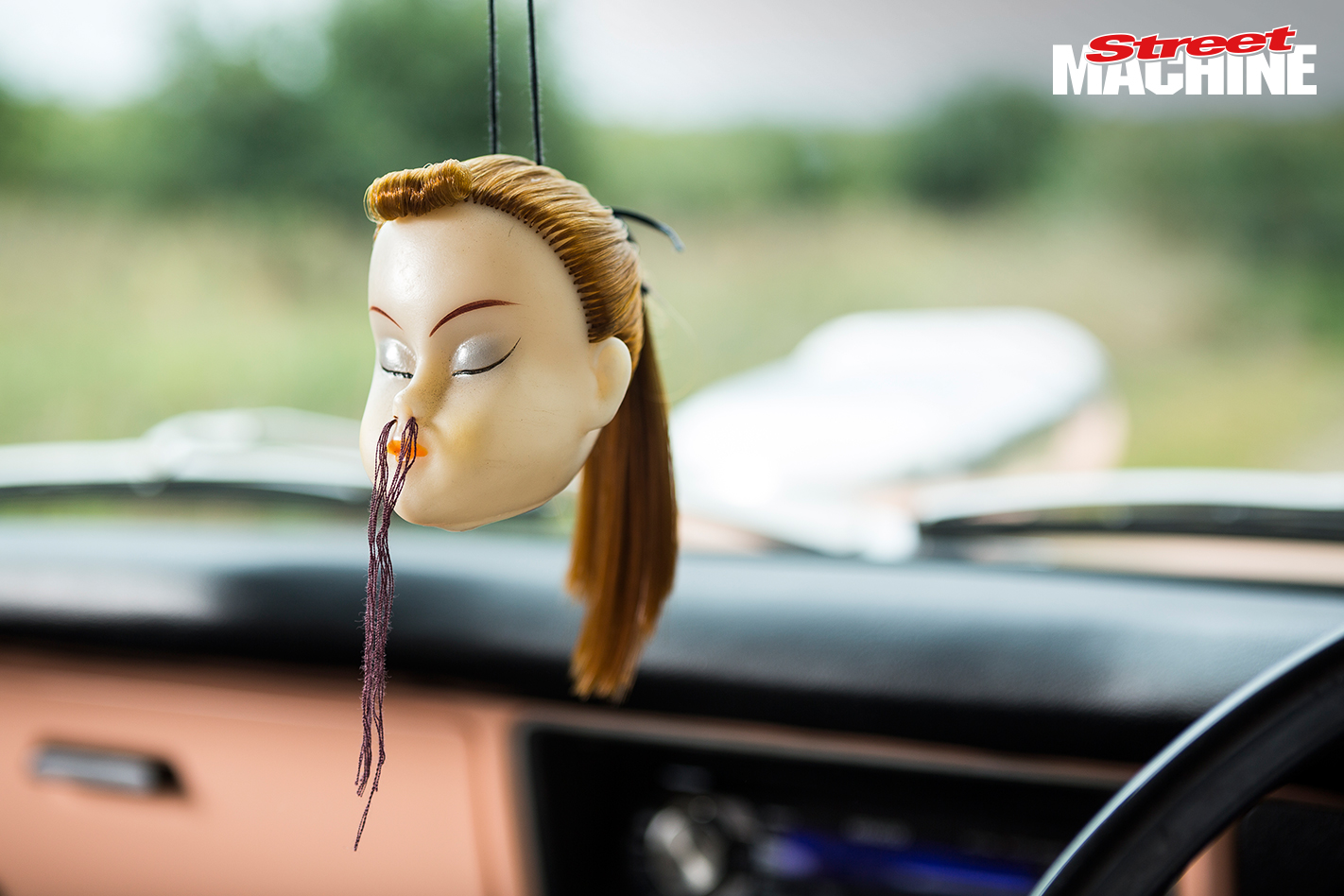