ADDING a big engine to a little car is a proven go-fast recipe, but it gets even tastier when forced induction is added into the mix. Street machiners have been fitting Holden V8s to LJ Toranas since the General’s own ill-fated factory hot rod was consigned to the history books, but few have a thumping 1000hp-capable F1 ProCharger strapped to the side, and fewer still are finished to the impeccable standard of Lee Murray’s example. 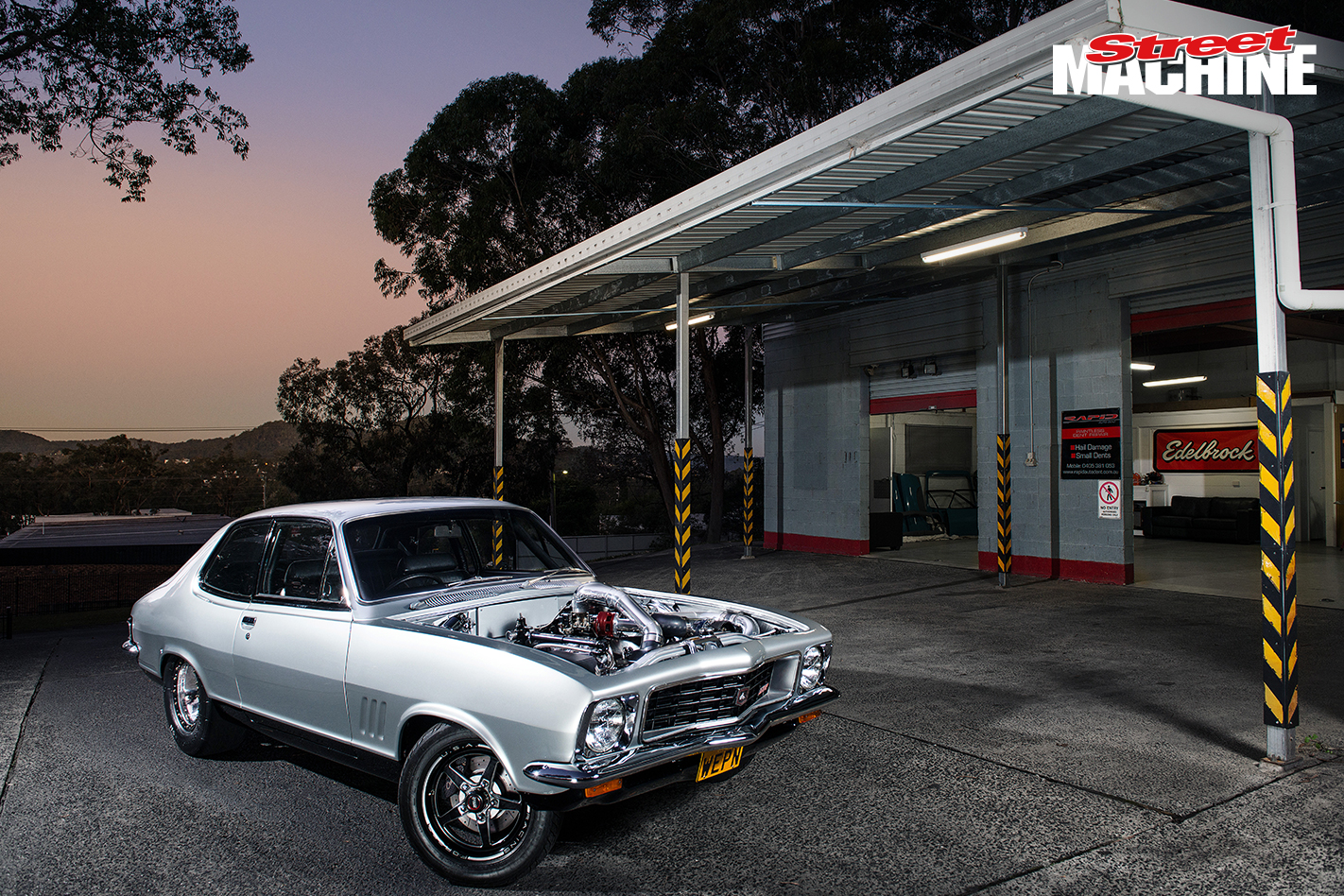 Apart from the reverse-cowl bonnet and stretched guards, the LJ's body is factory GTR-style

Lee bought the car out of the Trading Post back in 2004, and it’s been steadily evolving ever since. “I’d owned Toranas before but never an LJ, and I’d always thought a V8 LJ would be cool,” he says. At the time of purchase the car was running a hot six and nine-inch diff, so Lee promptly fitted a 355ci Holden stroker and hit the road. Unfortunately it turned out the motor had been built with junk components, and like sex with a supermodel, it didn’t last long. 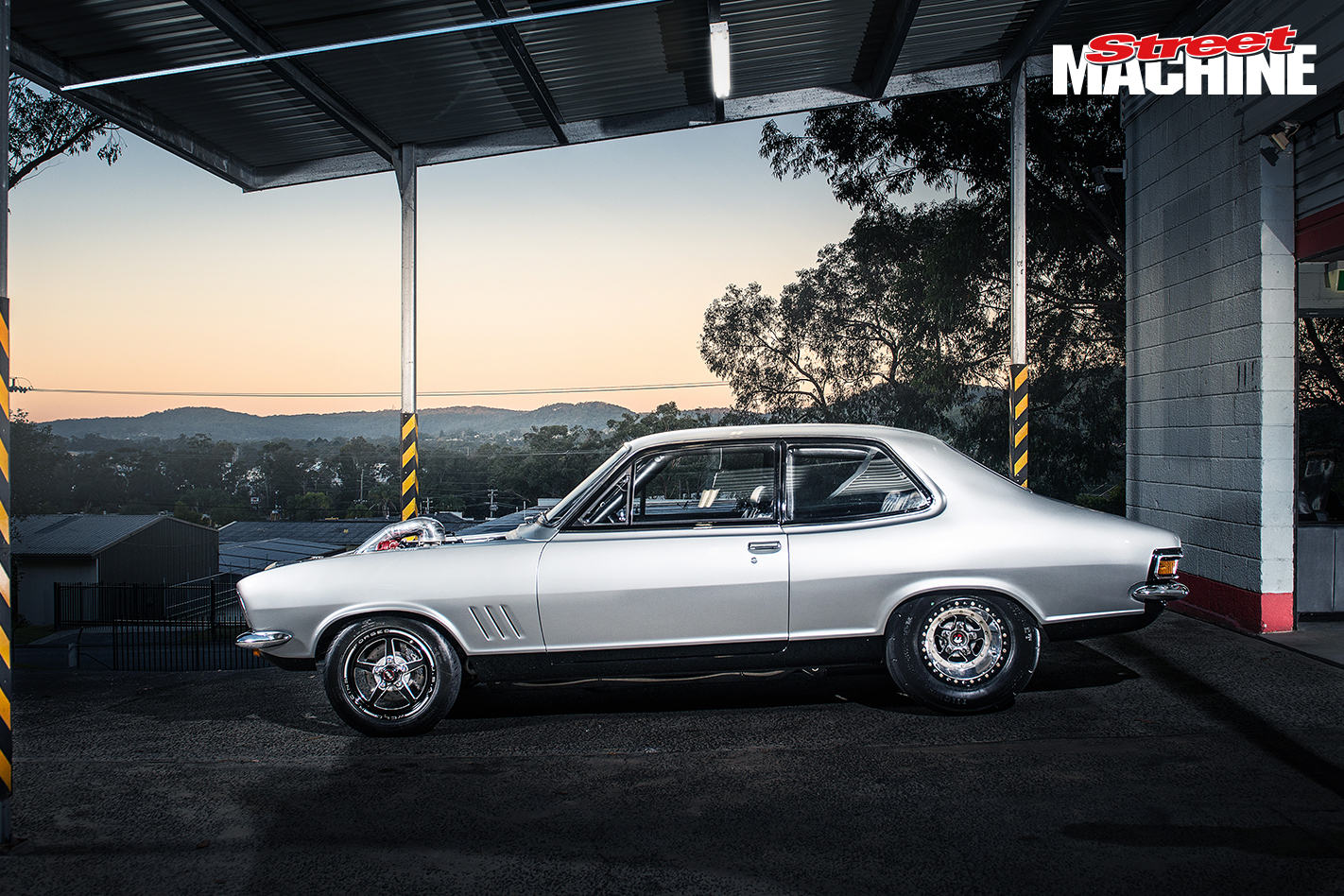 Lee has had the car for over ten years, and it was originally a six-cylinder but that motor was almost immediately swapped for a Holden 355 stroker

“I pulled the motor and had the car ’caged and mini-tubbed, then I sent it to my good mate Andrew Yeo, who repaired the body, stretched the rear guards and gave it a lick of paint,” Lee says. When Yeo suggested Toyota Aurion Silver as a potential hue, Lee was somewhat sceptical, but the colour suits the coupe’s shapely flanks beautifully. Ten years on and without so much as a cut or buff, the paint remains utterly flawless – a tribute to Yeo’s talent with the gun. 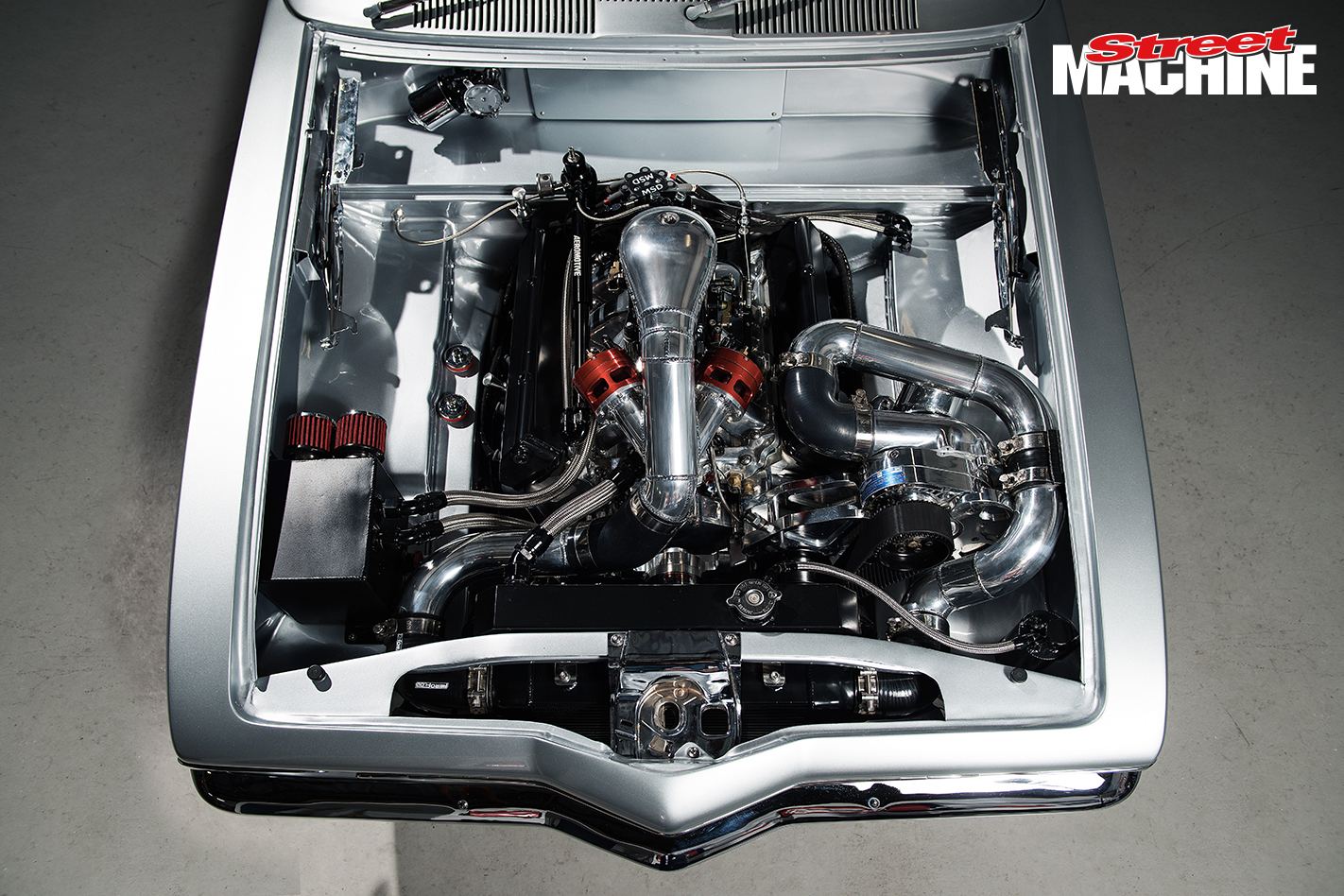 While all that was happening, Lee had another Holden stroker put together, this time with all the fruit. The pump fuel, solid roller-cammed 355-cuber turned out to be a good thing, running as quick as 10.6@130mph at Sydney Dragway. “I had years of fun with that motor, but its life ended at Powercruise when it snapped the crank,” Lee says. “I went on the hunt for more power, and ended up speaking to Zoran at ZOK Race Carbs about a 600hp-plus naturally aspirated combo. He suggested that we look at forced induction to keep it driveable, and that’s how the idea of the ProCharger came about.” 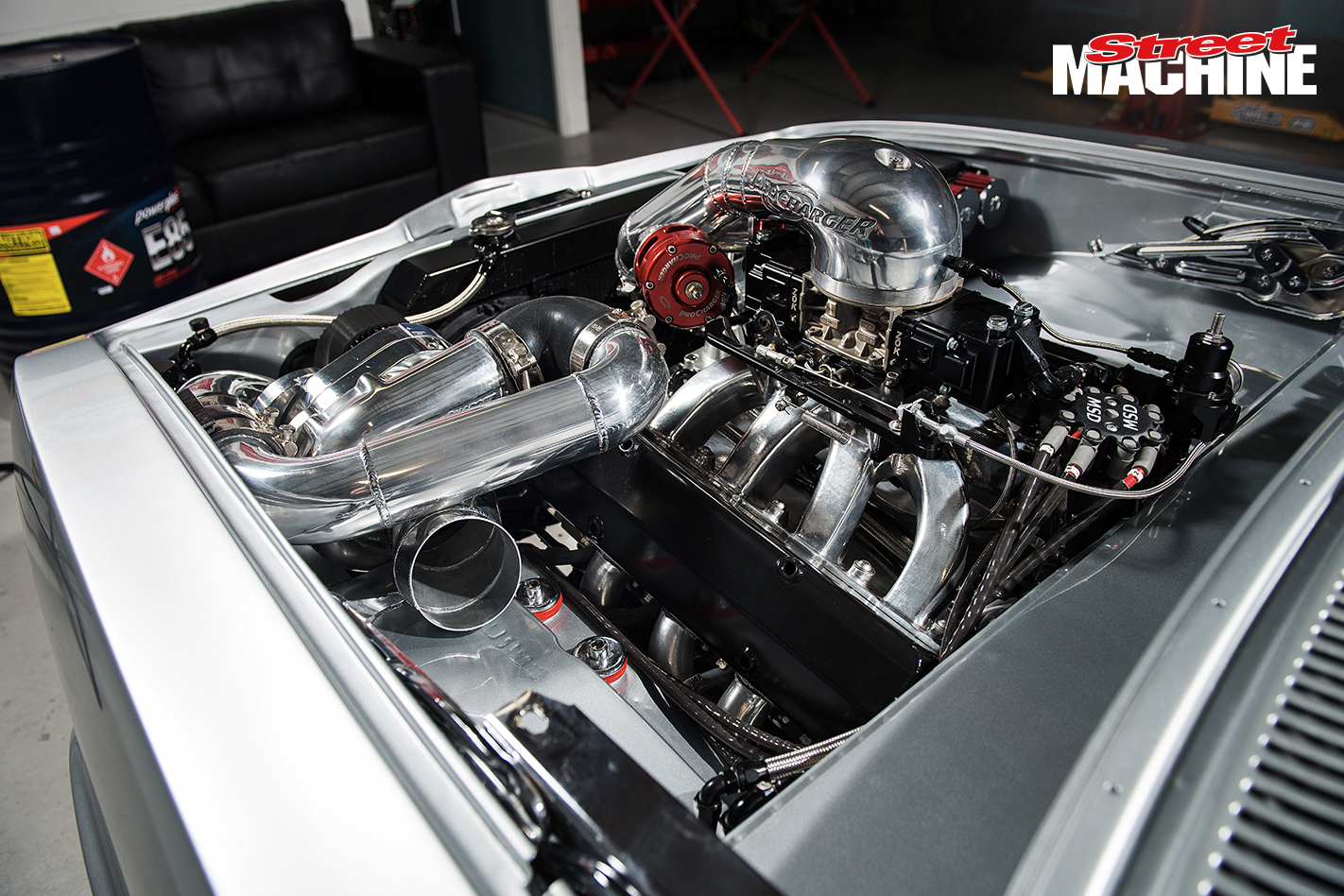 The engine is hooked up to a Protrans-built TH400 transmission with a 4000rpm converter and the rear houses a nine-inch diff with a strange 3.5:1 centre

Zoran prescribed an intercooled F1 ProCharger set-up with a blow-through 950cfm E85 carby, and set about building a fresh 355ci Holden combo to withstand the rigours of boost. Aside from a four-bolted, grout-filled block and a rock-solid rotating assembly consisting of a Scat billet crank, Compstar H-beam rods and JE forged pistons, the motor has a host of tricks to help it go the distance. An external coolant crossover to the rear of the heads, heavily modified oiling system, bronzed lifter bores, diamond-coated piston pins, Newby crank support timing case, Cometic head gaskets, and big –12 breathers located in the valley and the disused fuel pump port on the timing cover have all been designed with longevity and reliability in mind. With ported Yella Terra –9 heads and a custom Crane hydraulic-roller cam, the little Holden is handy for a commendable 800hp on the engine dyno and over 600 at the wheels, all on a lowly 10psi of boost. 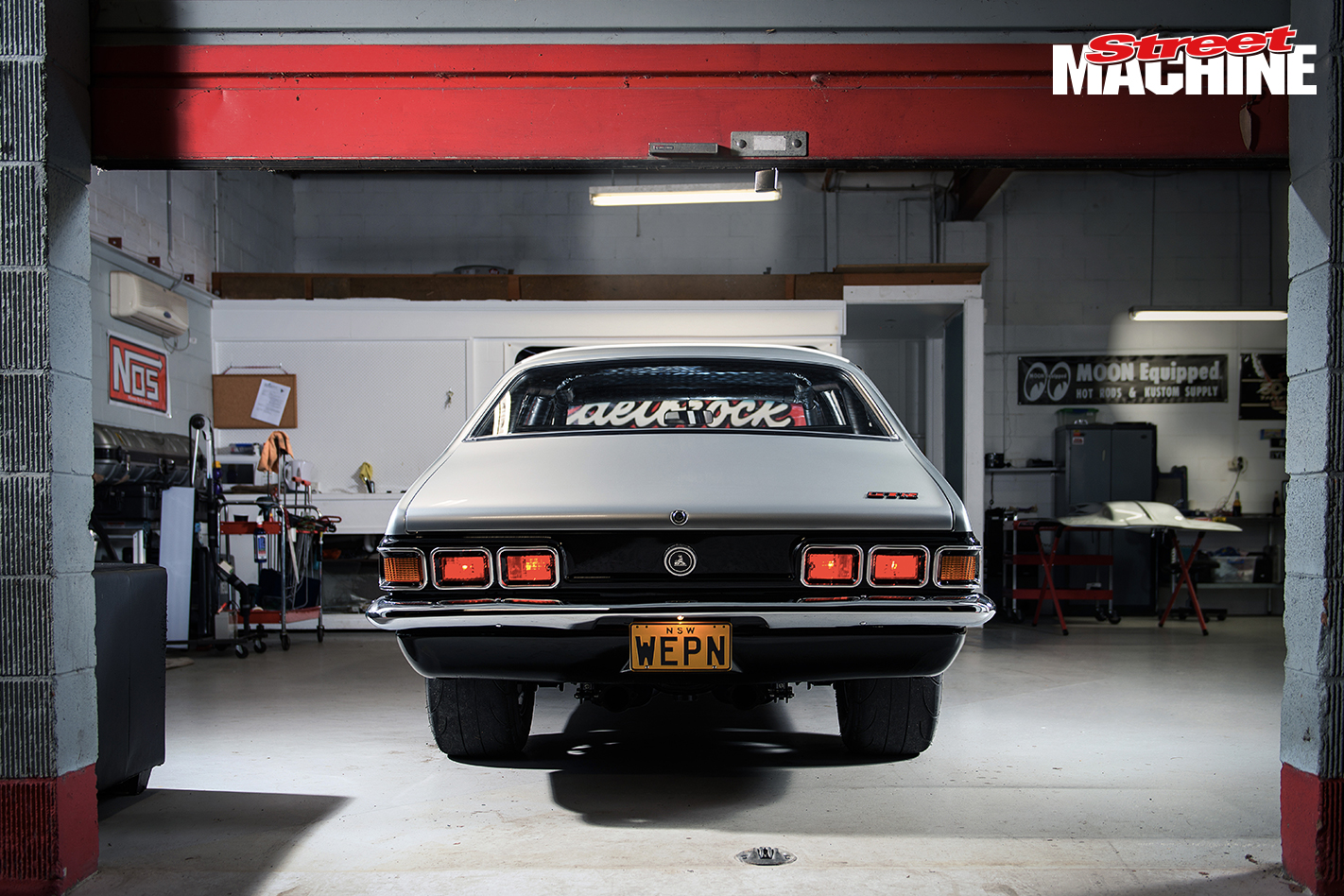 The ProCharger sounds every bit as good as it looks, but it wasn’t without its packaging issues. “Fitting an F1 ProCharger in an LJ isn’t easy,” Lee admits. “We soon found out that a suitable off-the-shelf bracket didn’t exist, so with a bit of head-scratching and careful measuring, Zoran came up with the initial design for a bracket, and Andrew at Bliss Custom Machining worked his CNC magic. The end product was phenomenal.” 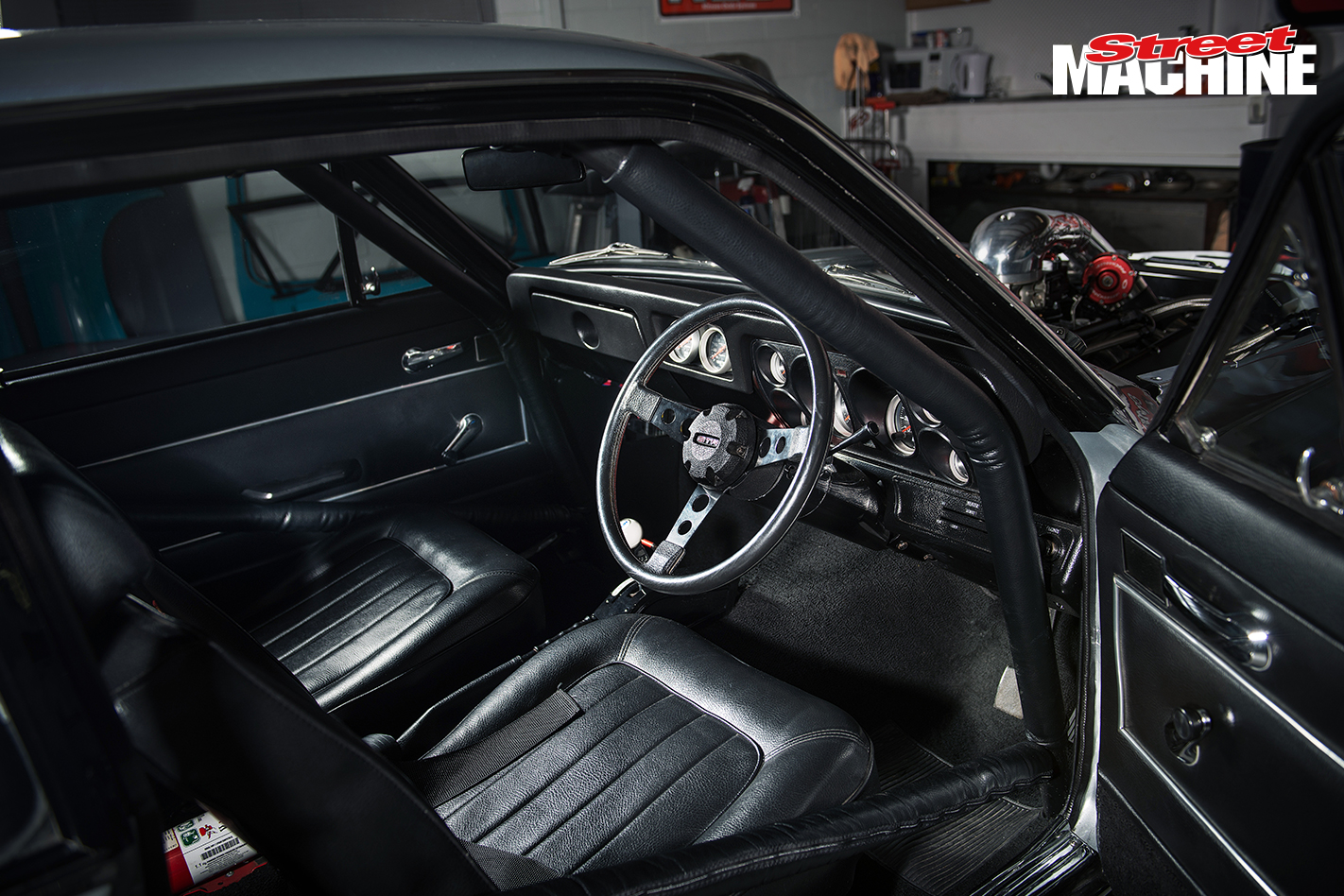 The interior is kitted out with all the GTR gear and as far as Lee is aware, the trim is all original!

It’s fair to say the Torana’s engine bay is pretty phenomenal across the board. The ported Harrop single-plane inlet manifold has been smoothed, de-webbed, and ceramic-coated by Mark at Procoat, while the firewall-mounted brake booster and master cylinder set-up has disappeared, thanks to a Wilwood under-dash pedal box with a Mazda RX-3 reservoir tucked away inside the cowl. Prep’d Motorsport took care of the expertly crafted aluminium intake piping, while a Lowe Fabrications alternator bracket hides the alternator from view. Every hose is braided with anodised fittings, and every surface is either painted, polished or coated. 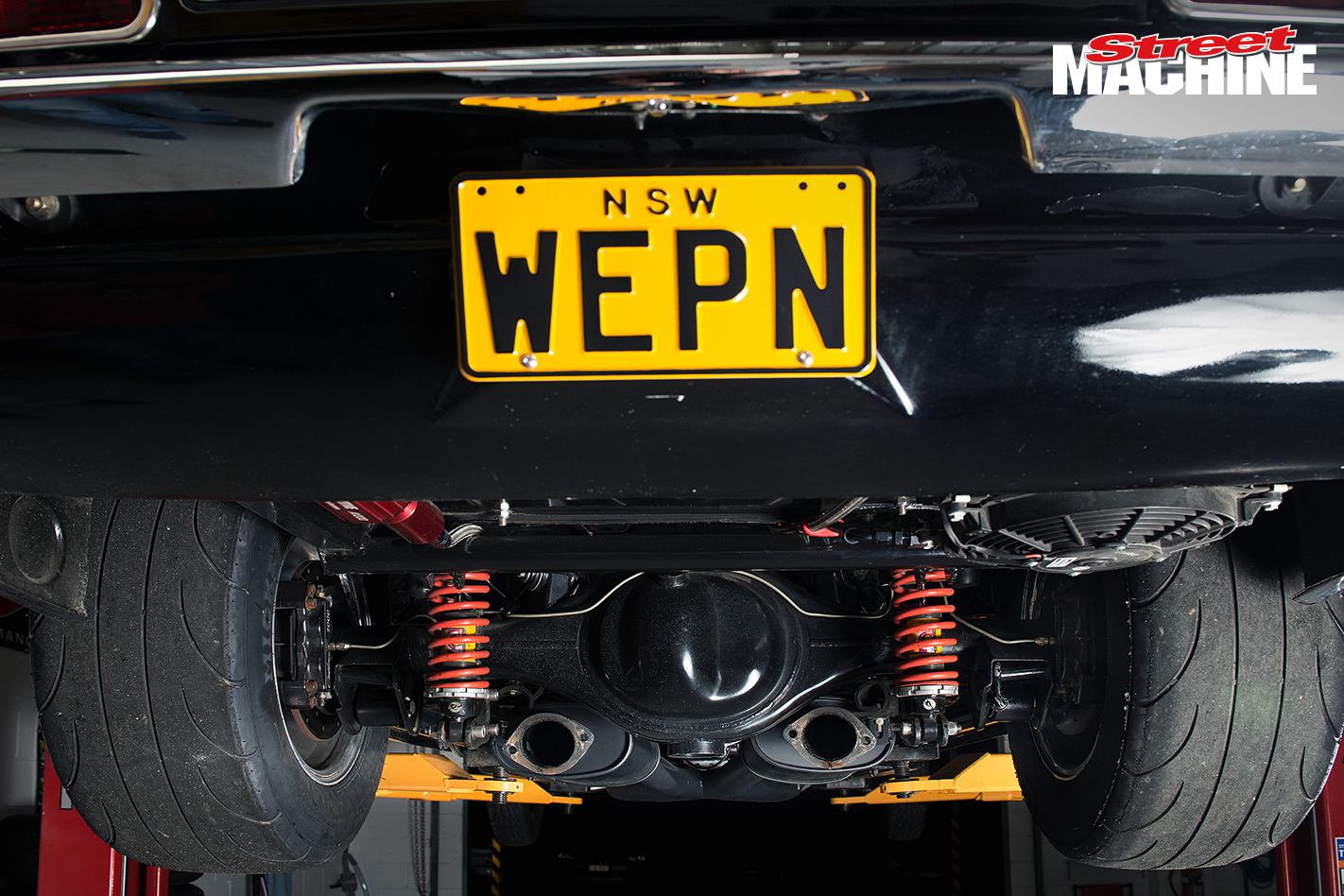 The engine is cradled in a set of Tuff Mounts and backed by a Protrans-built TH400 with a 4000rpm converter from The Converter Shop. The rear end is a shortened nine-inch with a Strange 3.5:1 centre and 31-spline Moser axles, anchored to the chassis via McDonald Brothers tubular trailing arms. The standard coil springs and shocks have been binned in favour of Spax adjustable coil-overs, which work to maximise weight transfer and give the Mickey Thompson 255/60/15 radials a fighting chance at maintaining traction. Weld AlumaStar wheels measure in at 15x3.5in up front and 15x8in down back. 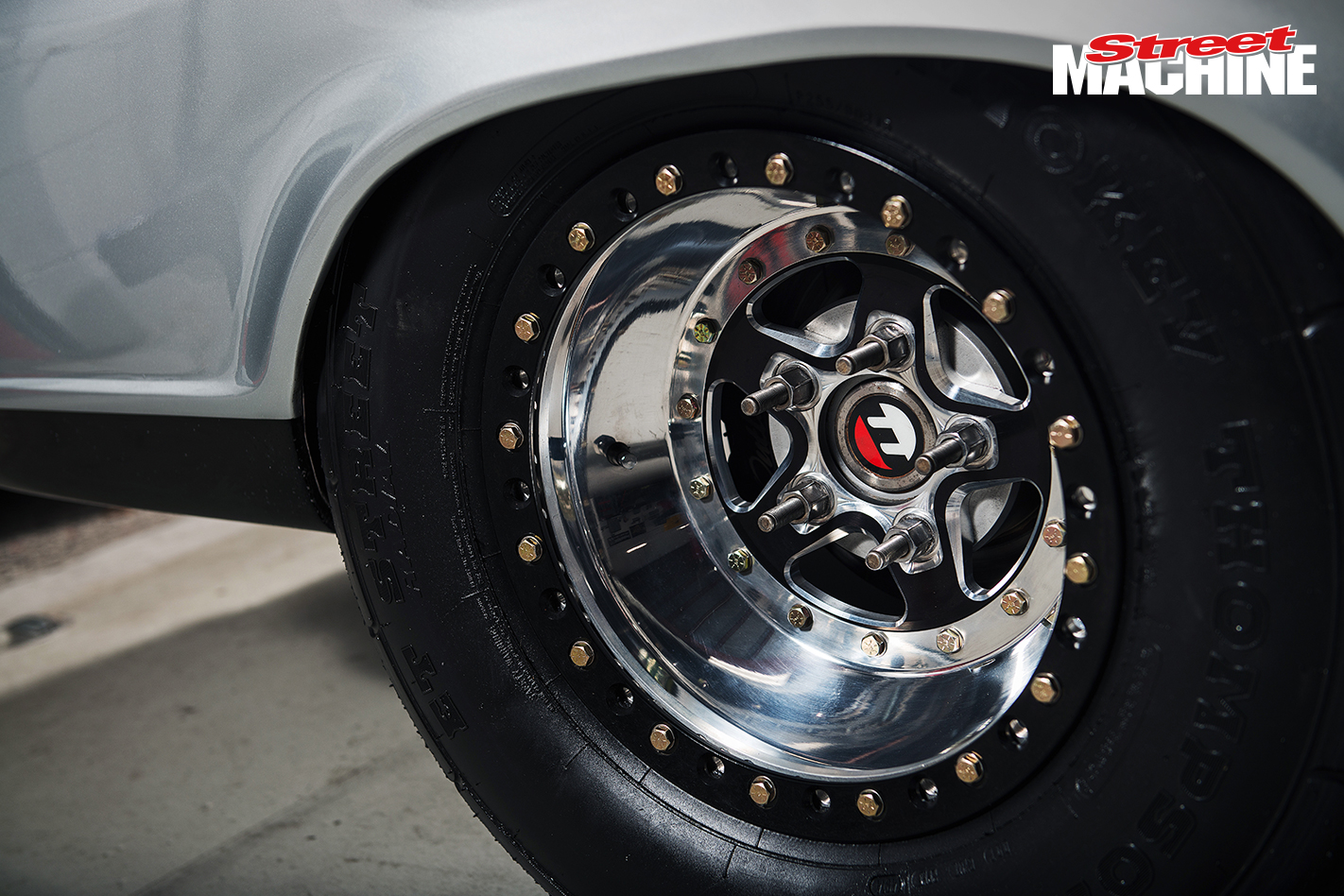 She rides on Weld AlumnaStar wheels all round measuring 15x8 at the rear and 15x3.5 up front

The cabin is one area of the car that hasn’t received much attention from Lee. The trim was in great condition when he bought the car, and as far as he knows it’s still original. “The only thing that’s been re-trimmed is the back seat when it was modified for the tubs,” he says. “It’s also had new headlining and carpet, but other than that it’s all factory. I fitted Auto Meter Sport Comp gauges to the standard cluster, as well as a GTR steering wheel, RCI harnesses and a B&M Pro Ratchet shifter, and ACM Mechanical did the six-point ANDRA-spec ’cage.” 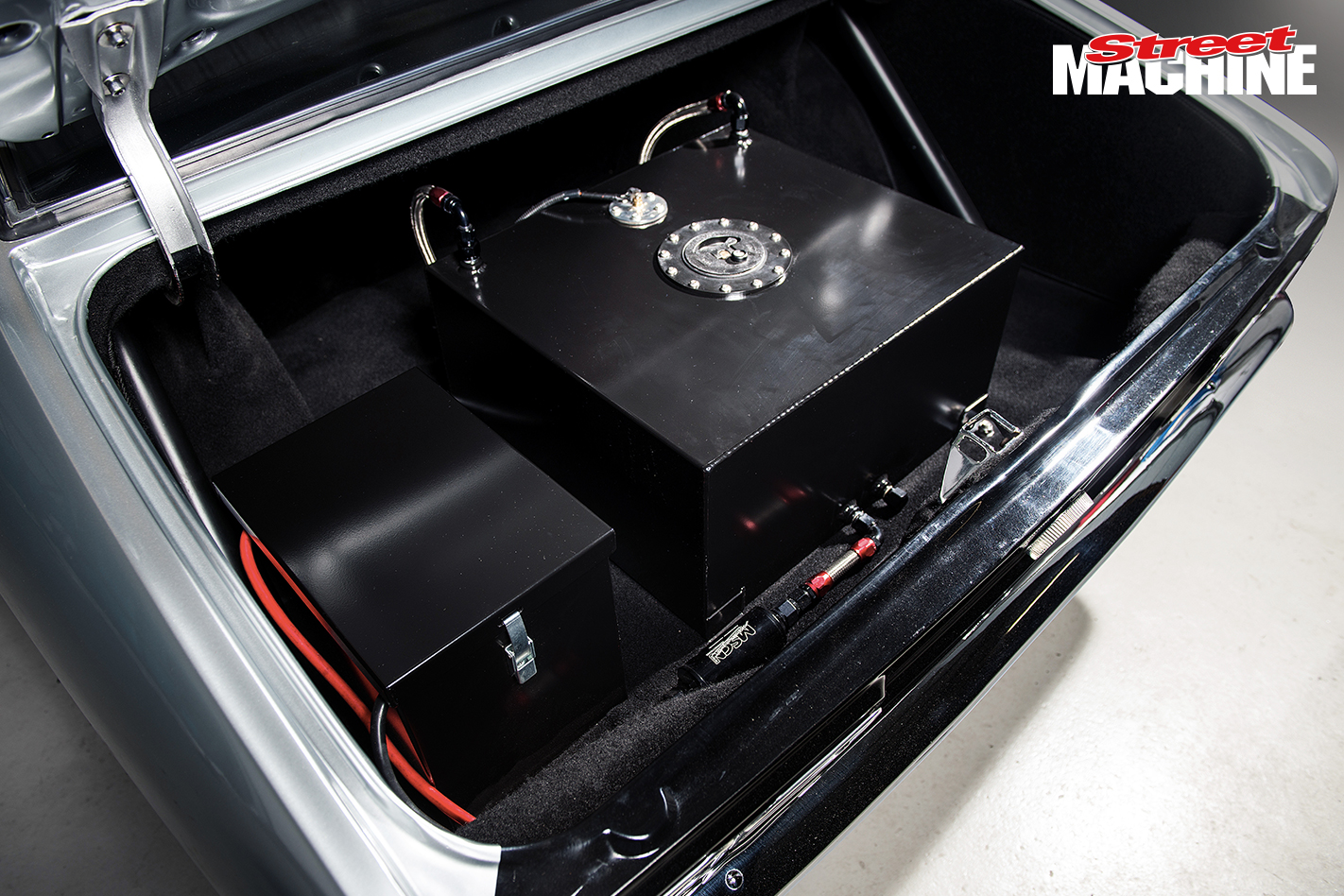 In the boot there's a fuel cell and custom battery box, both powder coated black 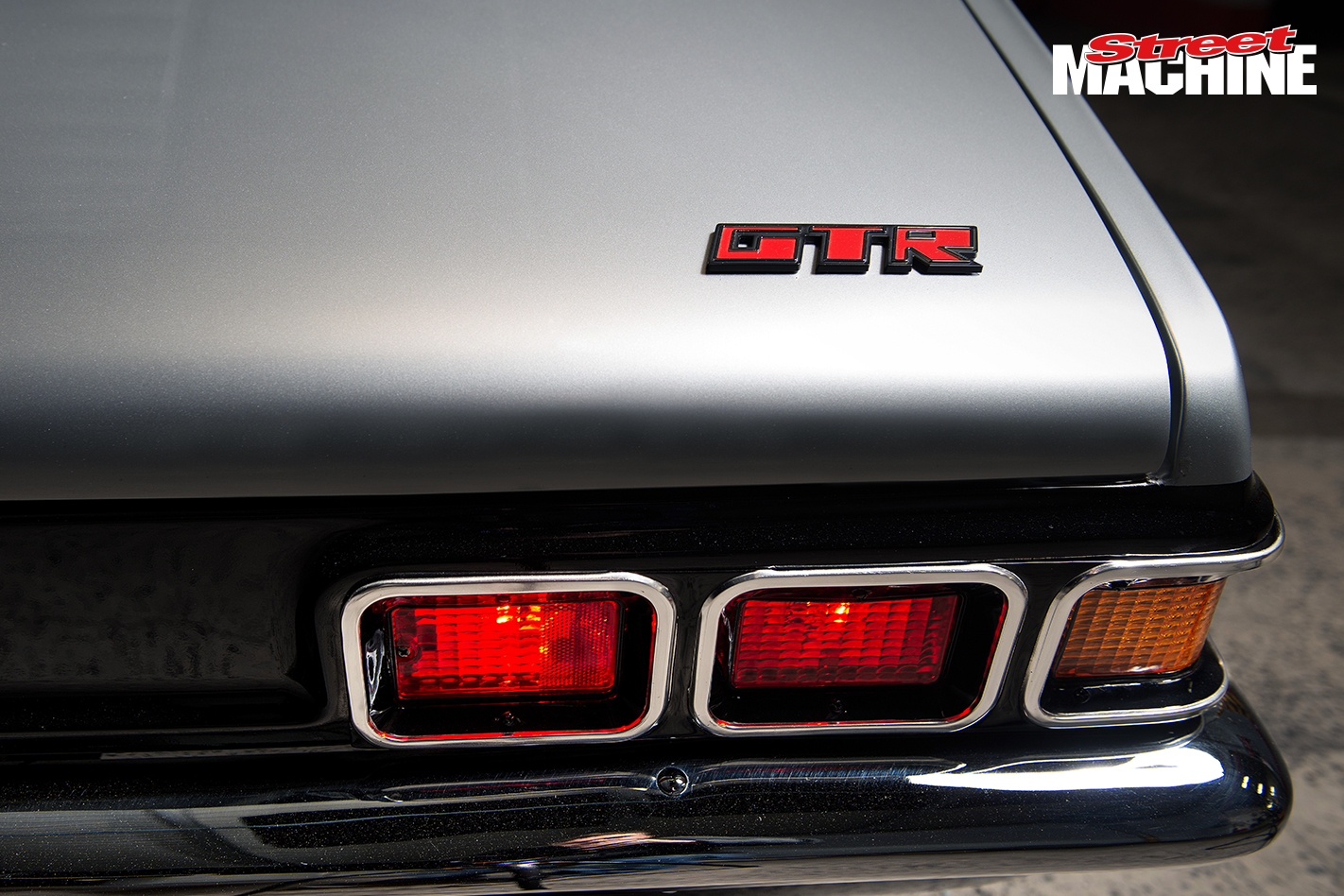 Other than that, Lee occasionally drives the car to work, and loves giving it a hiding at Powercruise, where we witnessed it kicking arse and taking names in the off-street drags. Now that the LJ is complete, Lee’s about to turn his attention to an LX hatch he has in the shed. “It’ll be more of a streeter – something that I can take the wife and kids to Harry’s in – but it’s still gotta be tough!” 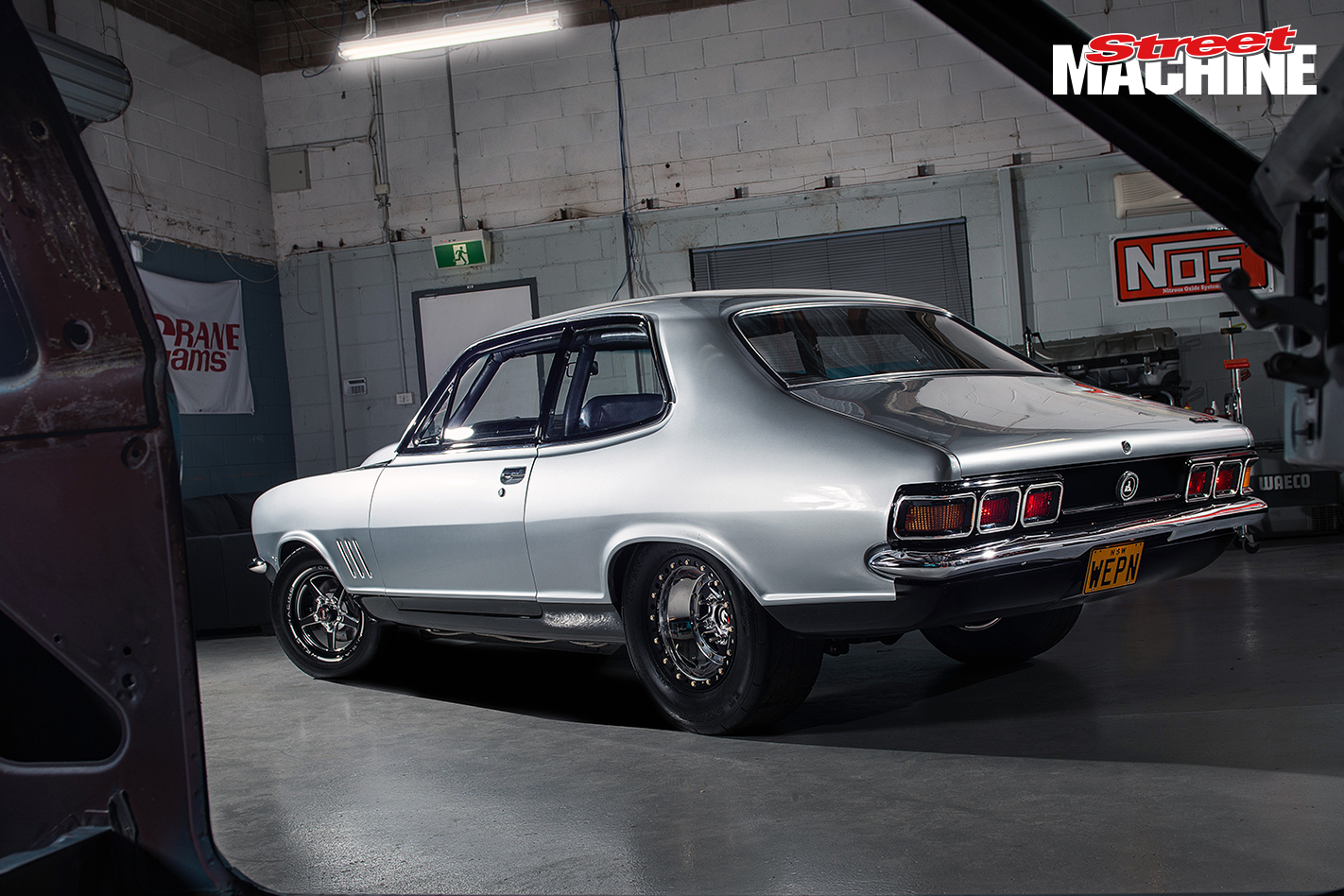 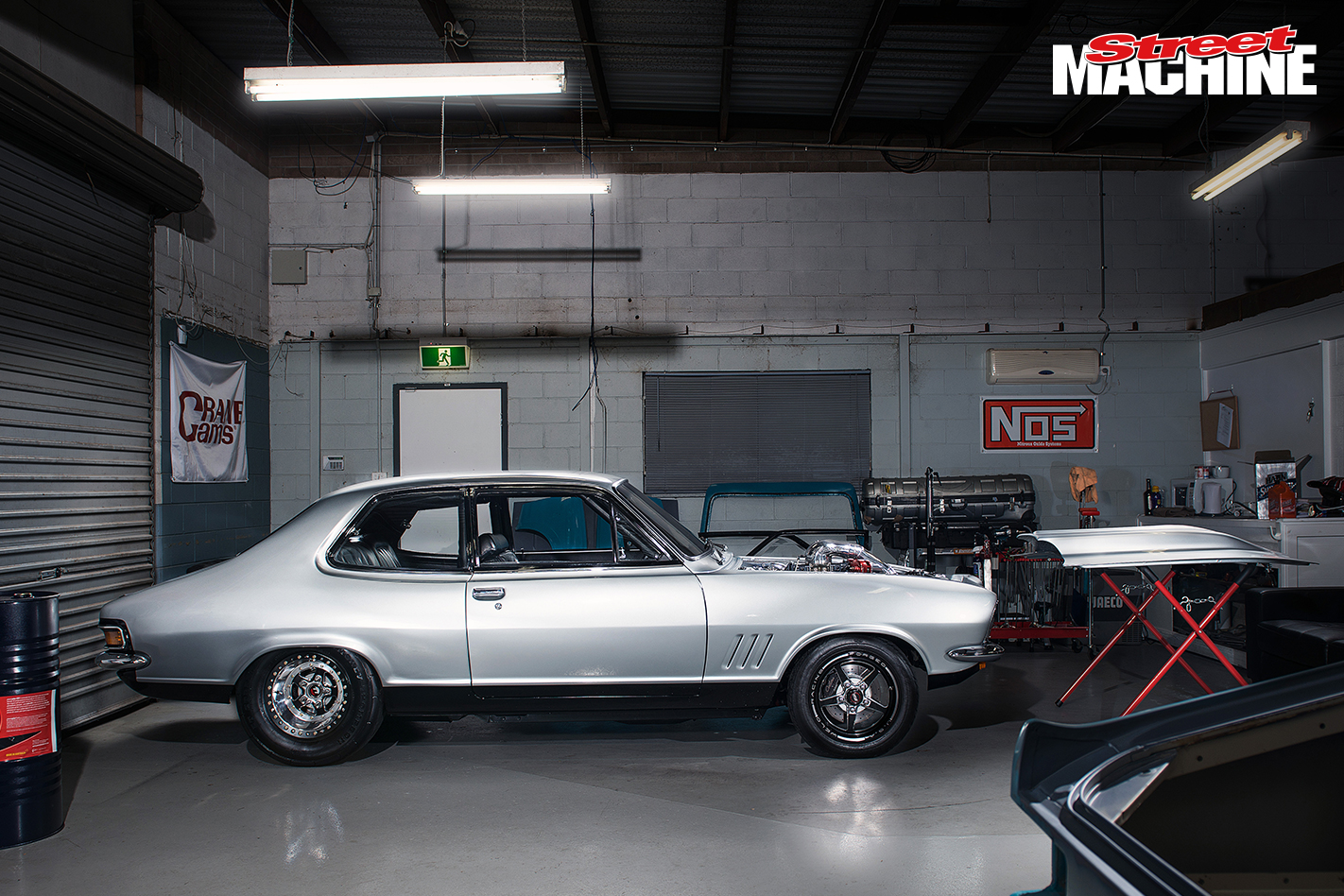 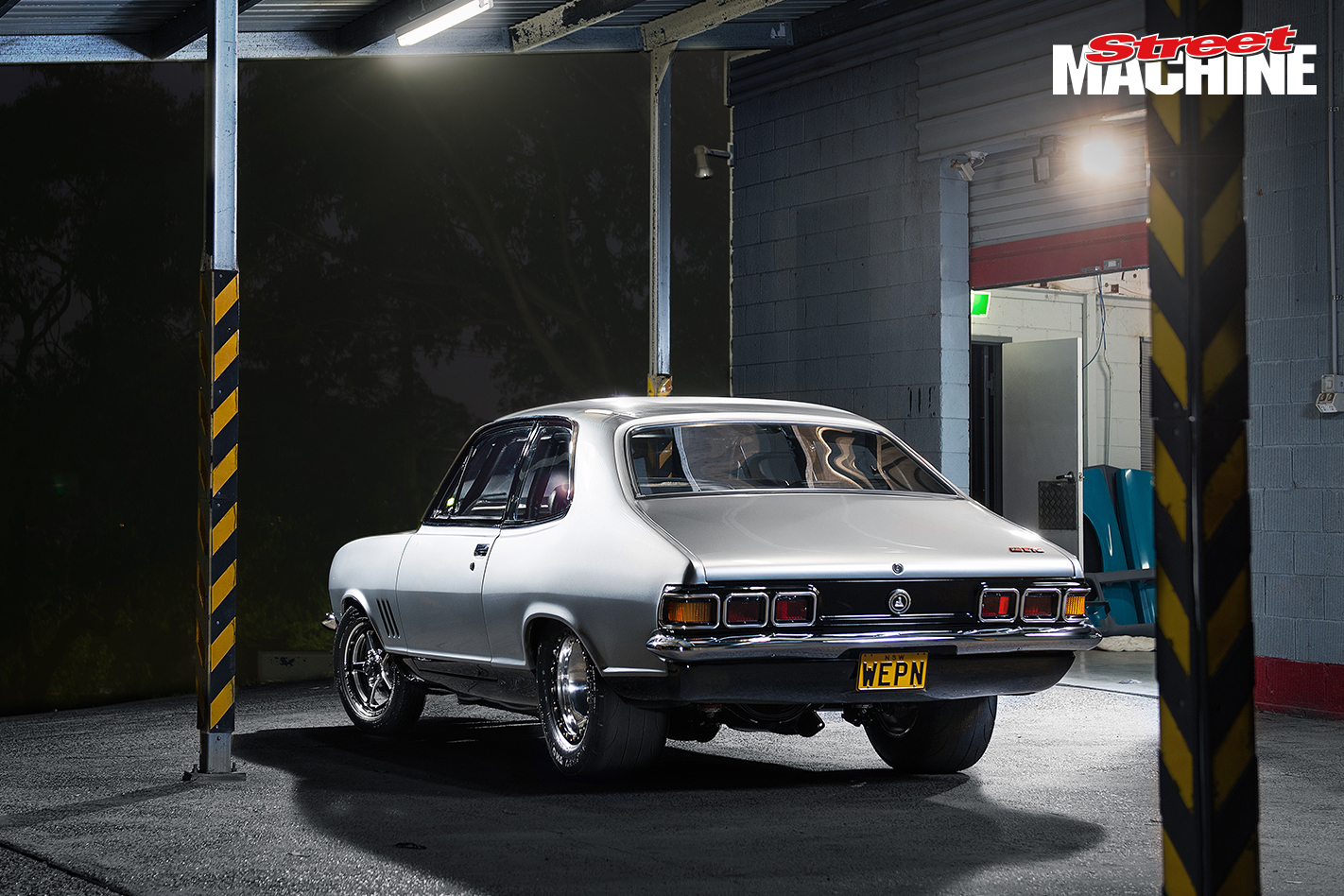 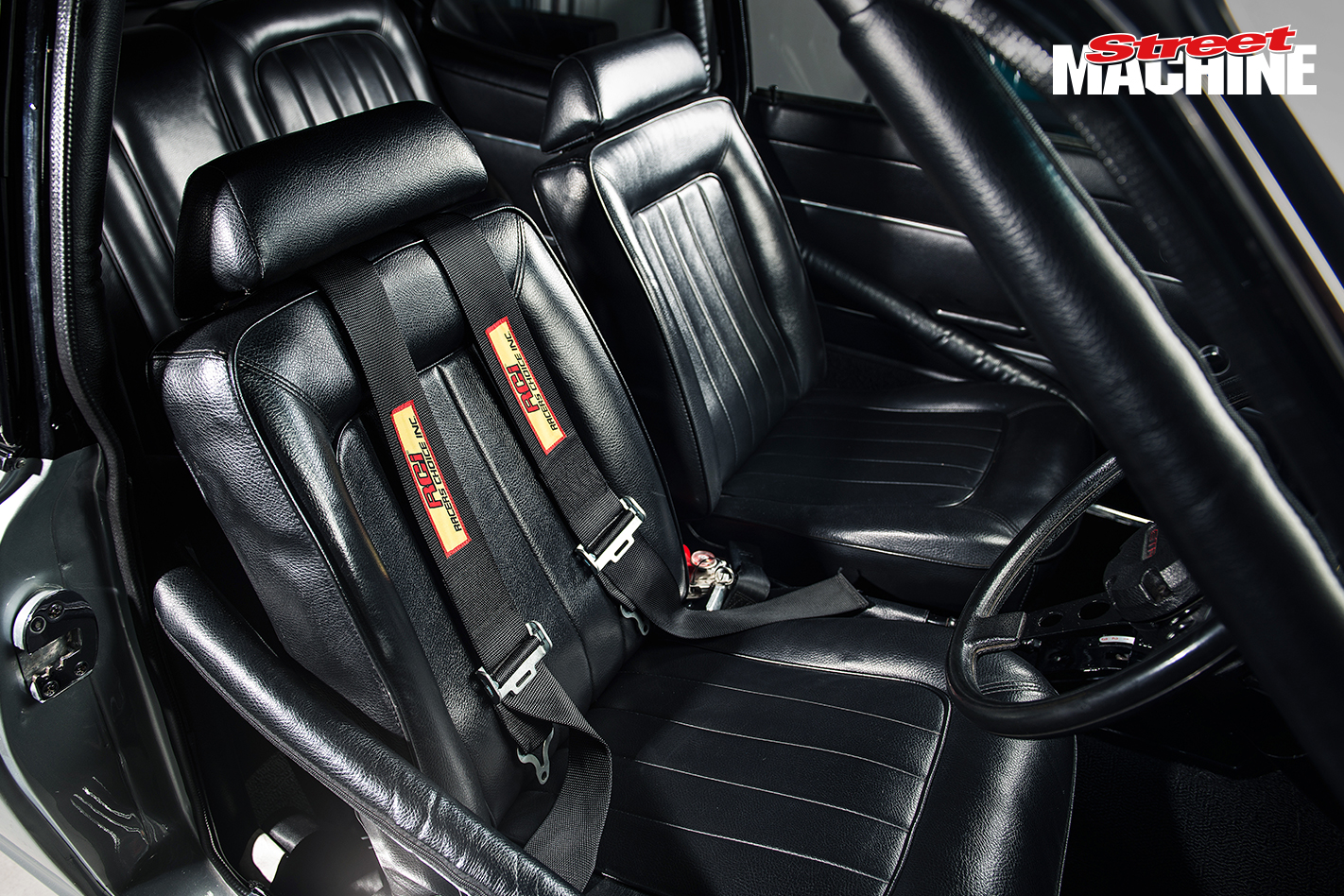 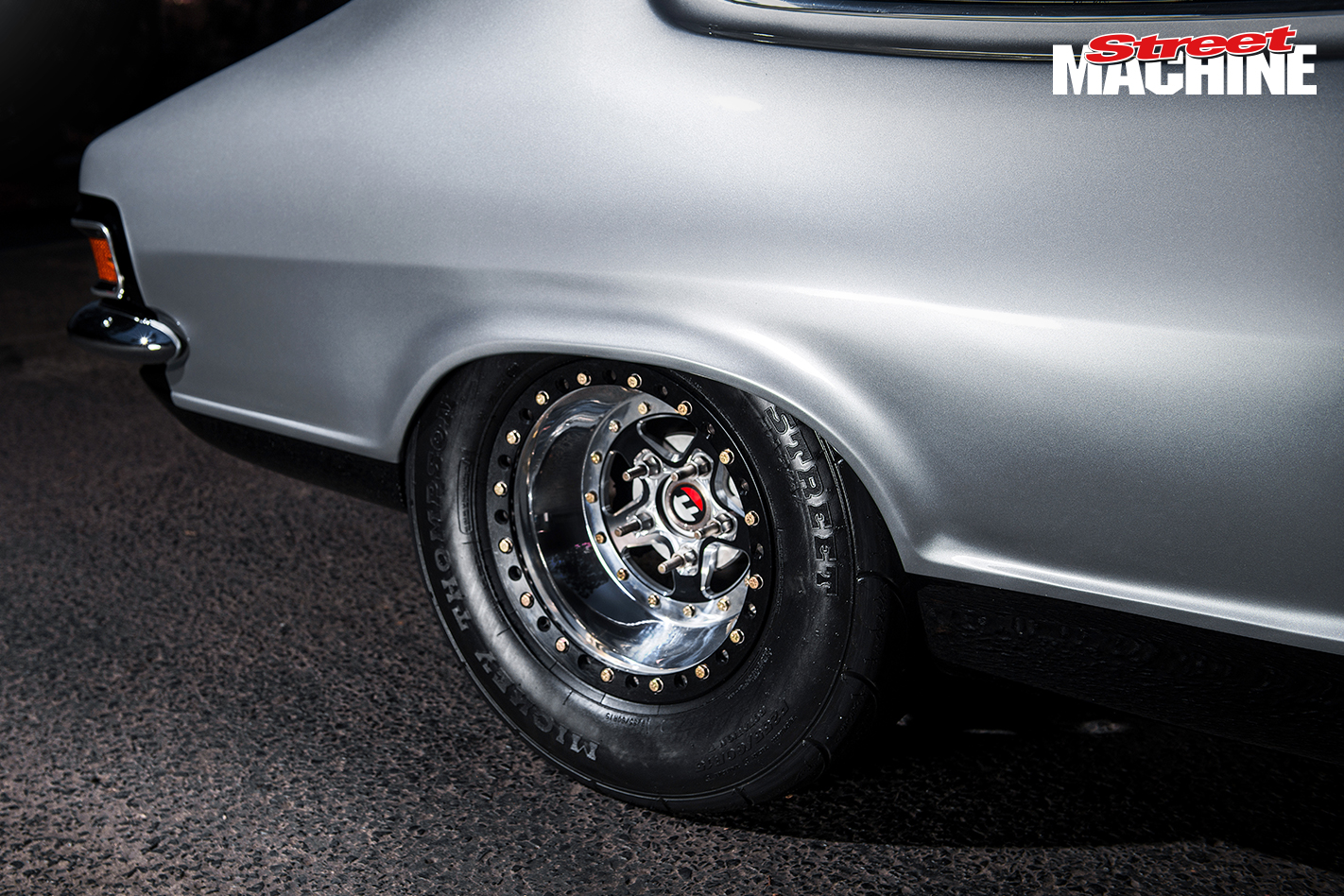 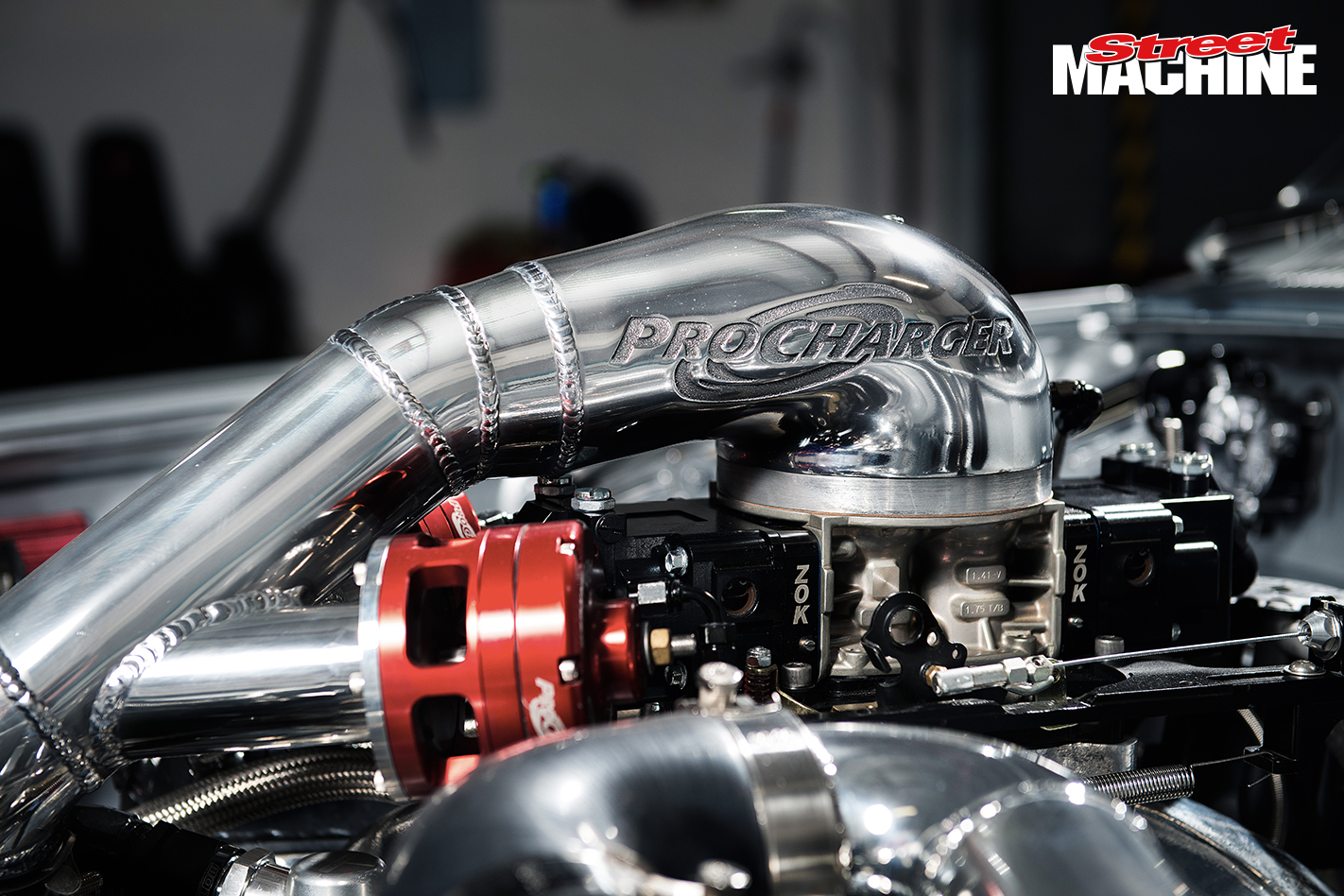 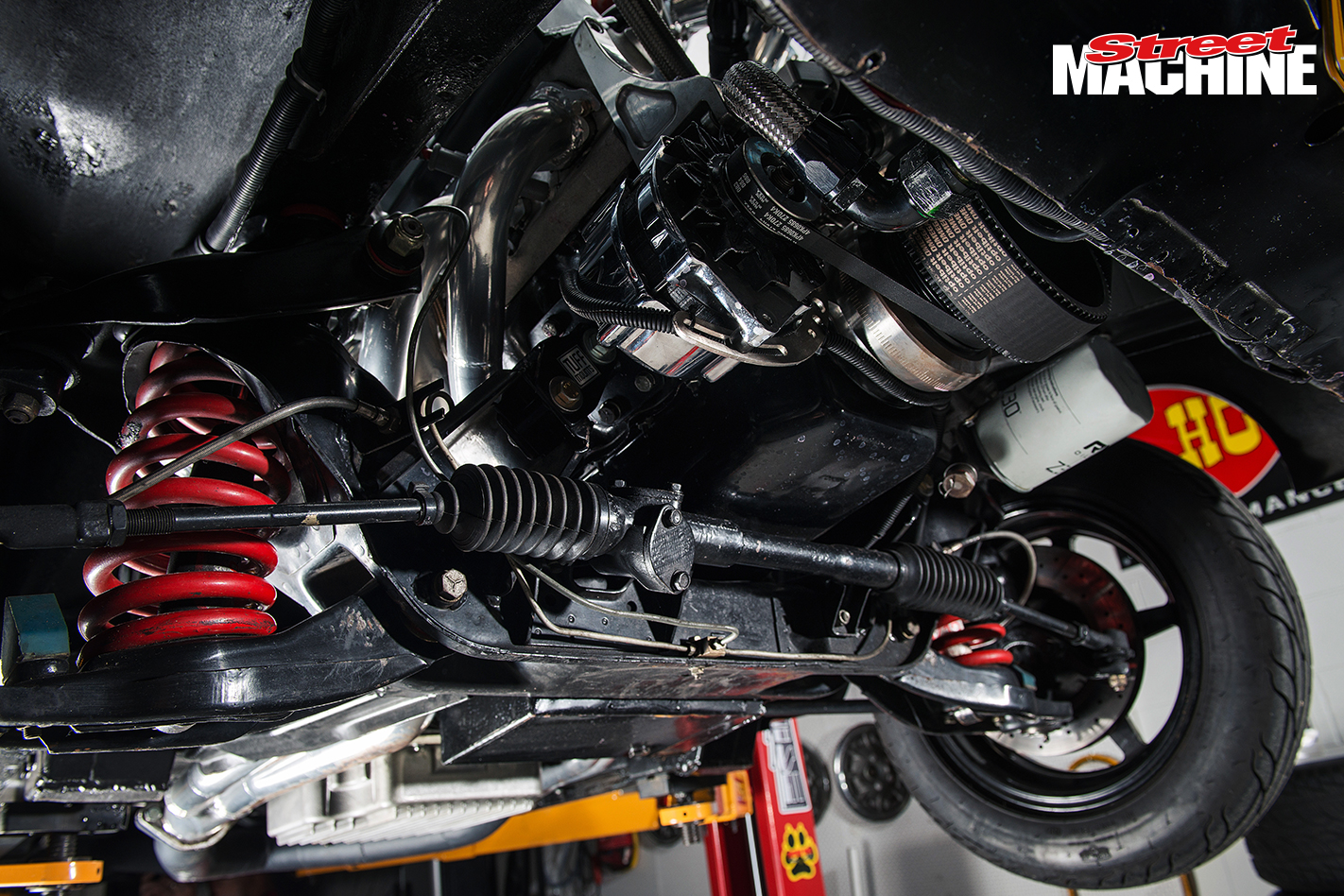