THIS IS not your average burnout car. That much should be obvious. But forget the intense green paint, the lack of forced induction and the show-quality detailing – this thing has freakin’ Bluetooth! 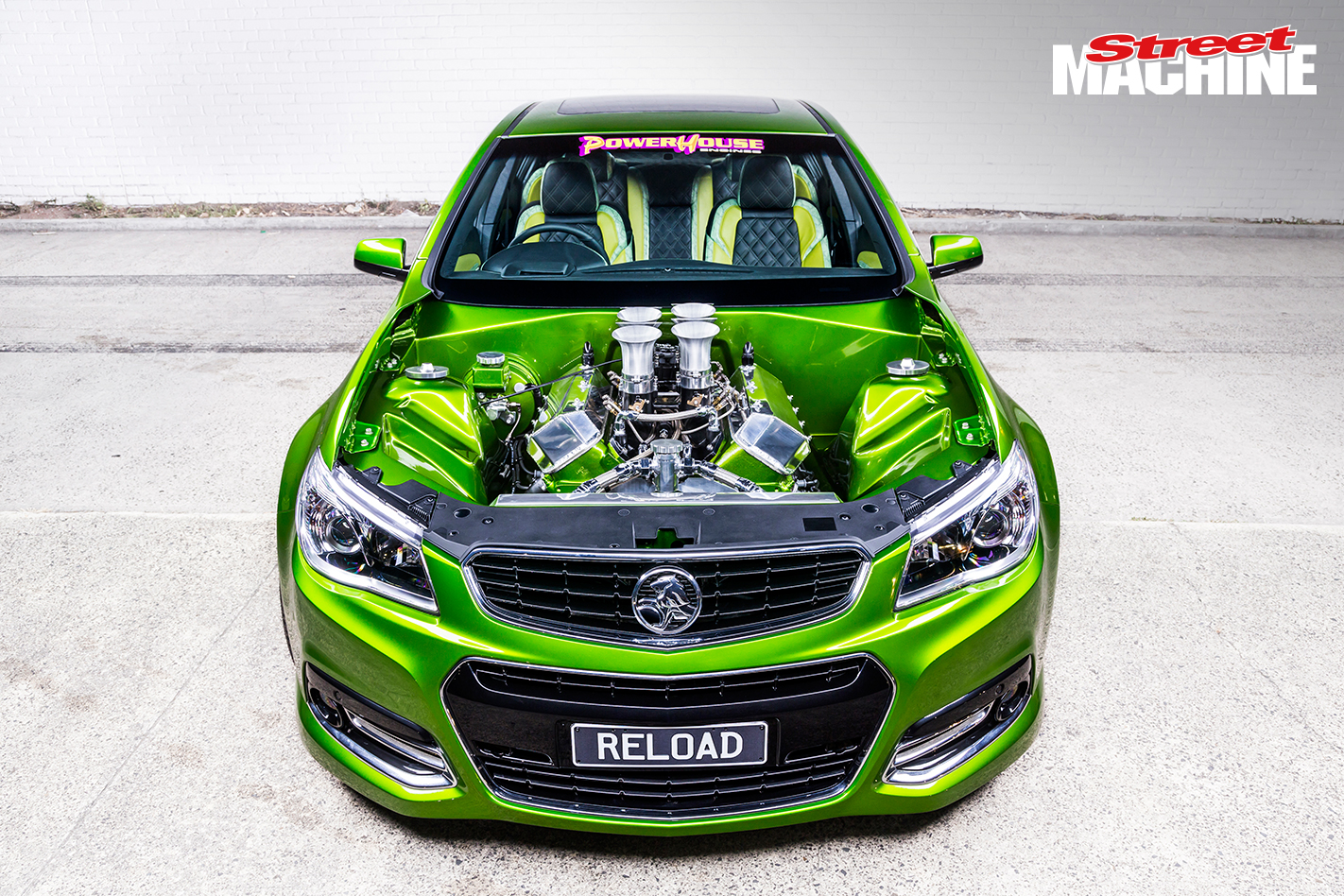 Steve Loader tells it best: “We were doing some test skids and I started hearing these weird noises through the stereo. My phone had connected to the Bluetooth and one of my mates was ringing me!” he laughs. Sounds like the start of a whole new industry to us – instead of calling an adult chat line, maybe you could call 1800-DIAL-A-SKID to hear 532 cubes of Chevrolet’s finest melt the tarmac. 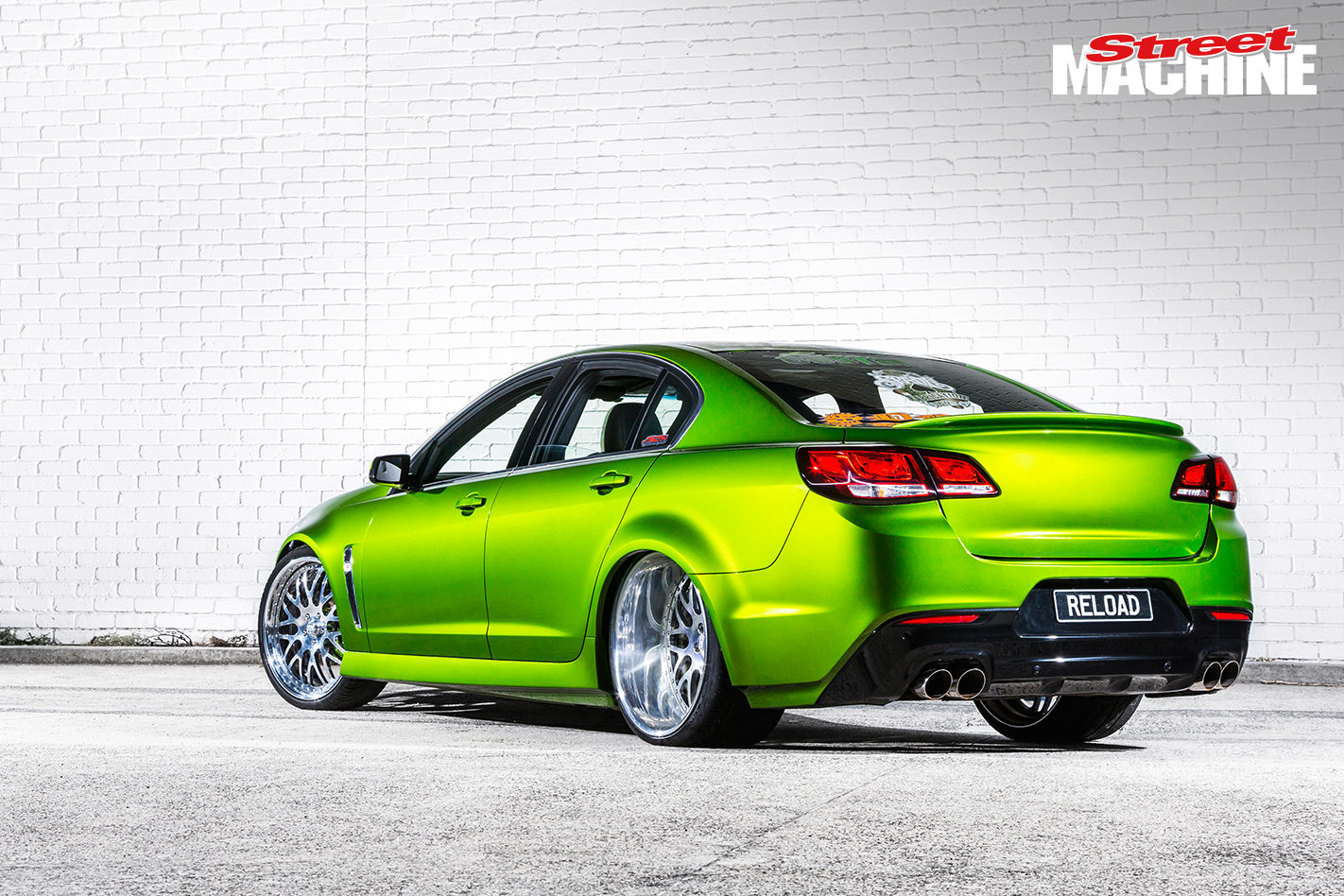 Steve's had a few burnout cars over the years, including UCSMOKE which he still drives, but with this build he wanted something different

You may remember Steve from such burnout machines as UCSMOKE and UNLOAD. He’s still got the former, but he sold the latter off to fellow tyre-shredder Steve Edsall back in Easter 2014. With a pocketful of cash, Steve started thinking about another build, and after the success of UNLOAD he decided to go with another late-model – this time a VF Commodore SS-V Redline. He bought the rolling shell from a Holden wrecker as a write-off. “I wanted to do a VF because no one had done one yet,” Steve says. “It only had 2000km on it, and it had been hit in the left-hand front. It had no motor, ’box, diff or brakes because the Redline came with Brembos. It was also missing the tail-lights.” 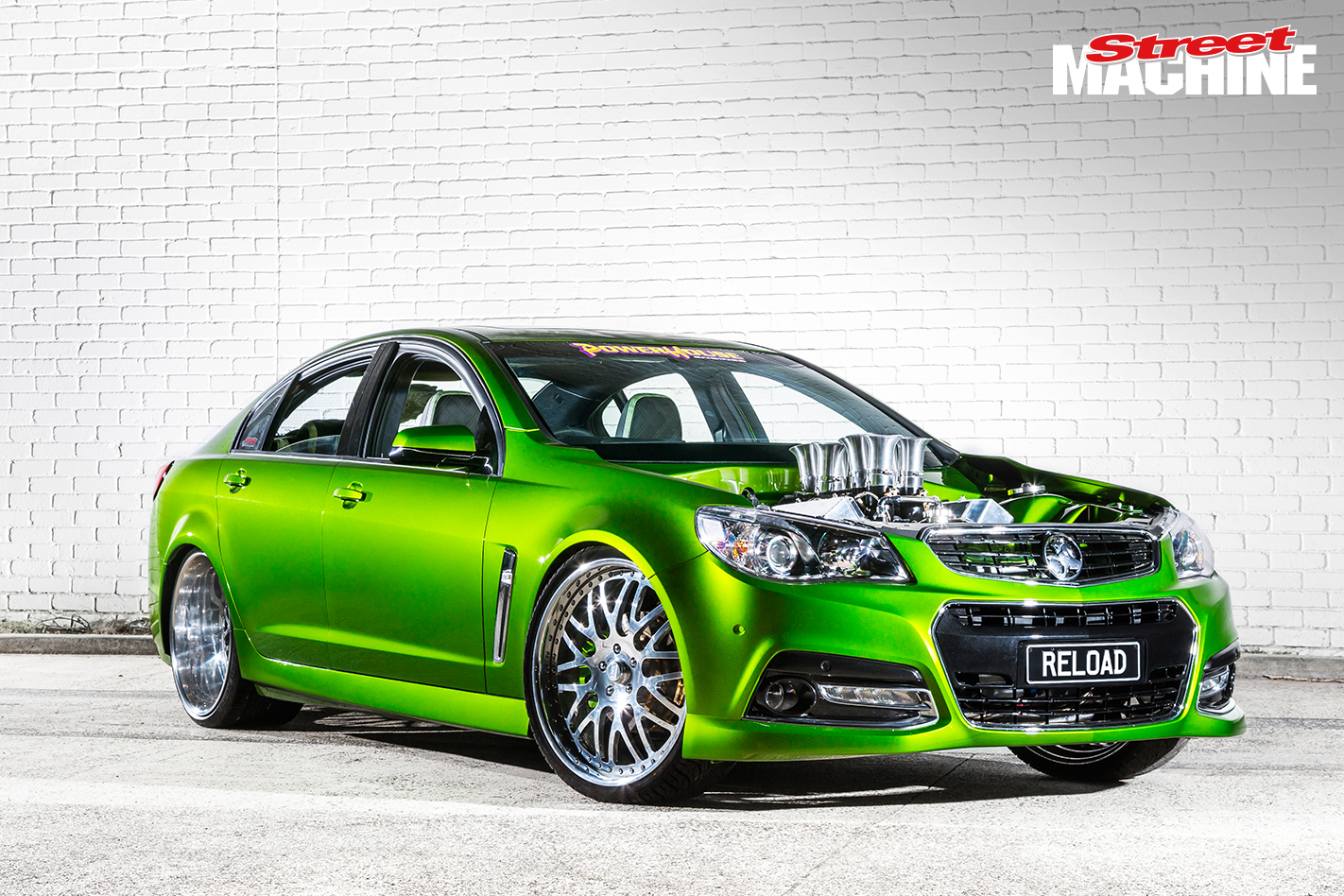 Steve settled on a VF because no one had done one before, and he didn't want the now-common blower hanging out of the bay

In basic white with a crunch in the front, the VF wasn’t looking too flash with all the good gear missing, but Steve also got a bare VE sedan shell to use for parts. “We used that for the radiator support and chassis rail,” he says. First port of call was Burn City Customs in Seaford, where they turned the shell back into a real car, repairing all the accident damage. Then it was off to Black Spade Fabrications for the tubs and ladder-bar rear. That’s also where the boys positioned the big-block and Powerglide before Steve carted it off to Extracted Performance Exhausts for a set of custom headers and full exhaust. With a build like this it certainly pays to have your own tow truck. 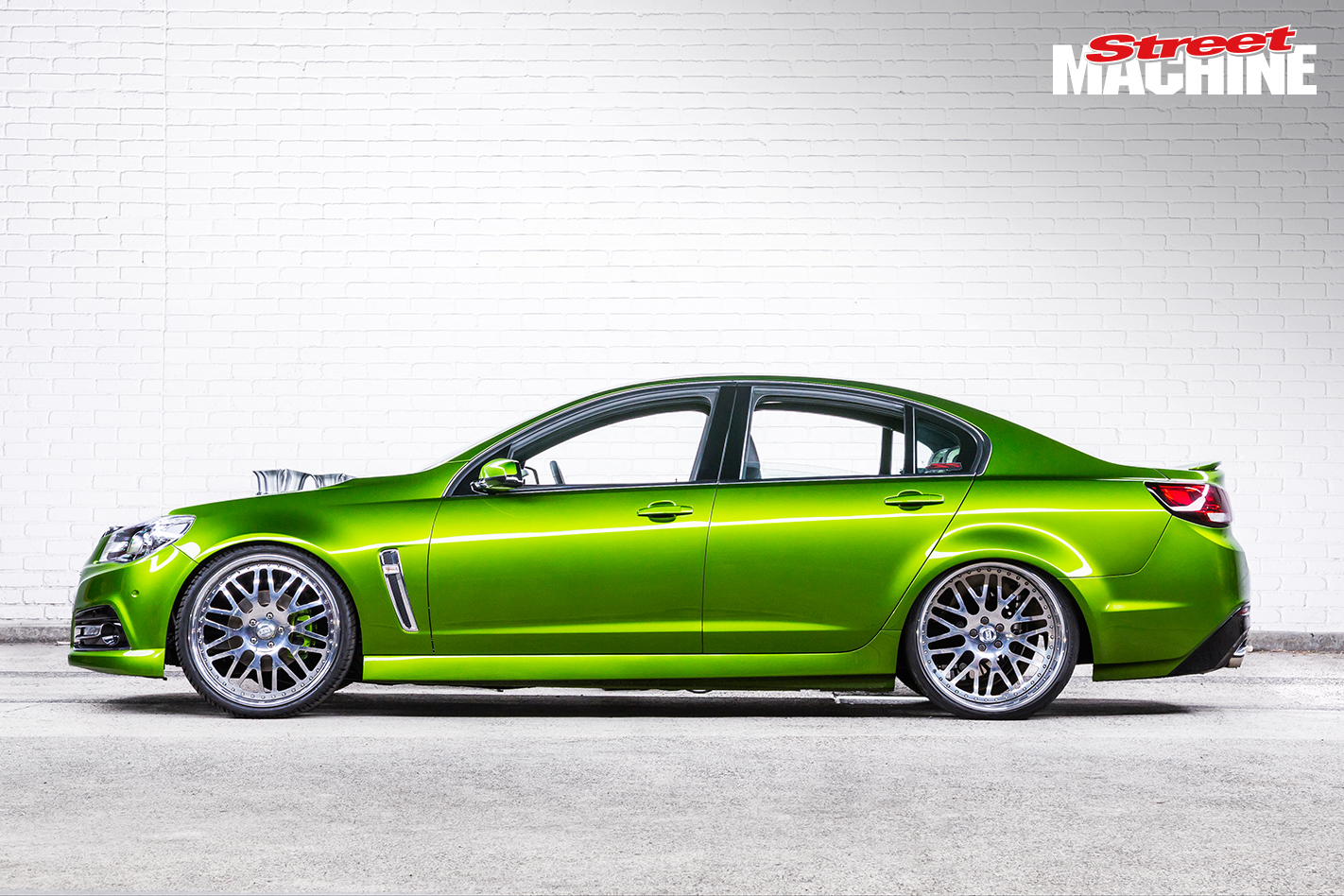 The car had a heap of body work done to it, most of which is hidden or under the bonnet. Steve wanted to keep the door hanldes though, he doesn't like them shaved

Then it was back to Burn City for the new firewall, new radiator support and filling the inner guards with fresh sheet metal. The VE and VF Commodores have a lot of openings in the engine bay, especially forward of the suspension towers. The team at Burn City filled and smoothed it all to provide a seamless finish; they also deleted the fuel filler and aerial holes while they had the MIG and grinder handy. You may ask, why not shave the door handles as well? “Yeah, I didn’t want to do that,” Steve says. “I reckon it looks shit.” 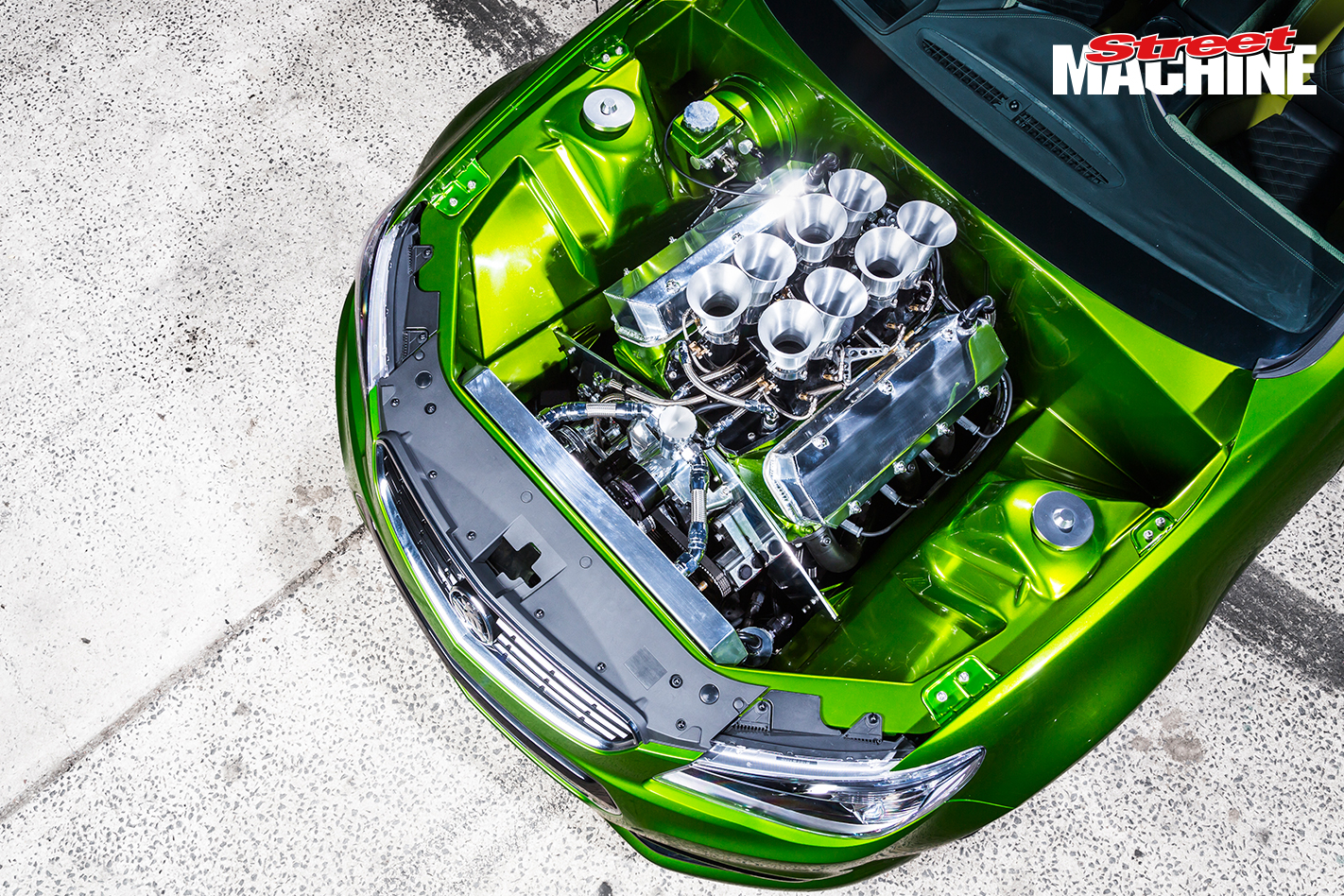 While all this was going on, Johnny and his team at Powerhouse Engines were working on the donk. Steve wanted to do something different to the towering metal mountains that have taken over the scene. No blower here; just cubes and revs! Sticking with the tried-and-true 532ci combo, Johnny filled the Dart Big M block with a Callies crank and rods, and 12.5:1-compression JE pistons. The Brodix BB3 heads have been ported and filled with titanium Ferrea valves for the maximum rev-ability. A Peterson dry sump system keeps the oil under control, while the fuel comes from a Kinsler mechanical fuel pump up to the eight injection stacks and Enderle intake. “I bought the Enderle injection stacks second-hand from the US,” Steve says. “They had direct-port nitrous plumbed in, but we removed all that and cleaned them up – it looks mint!” 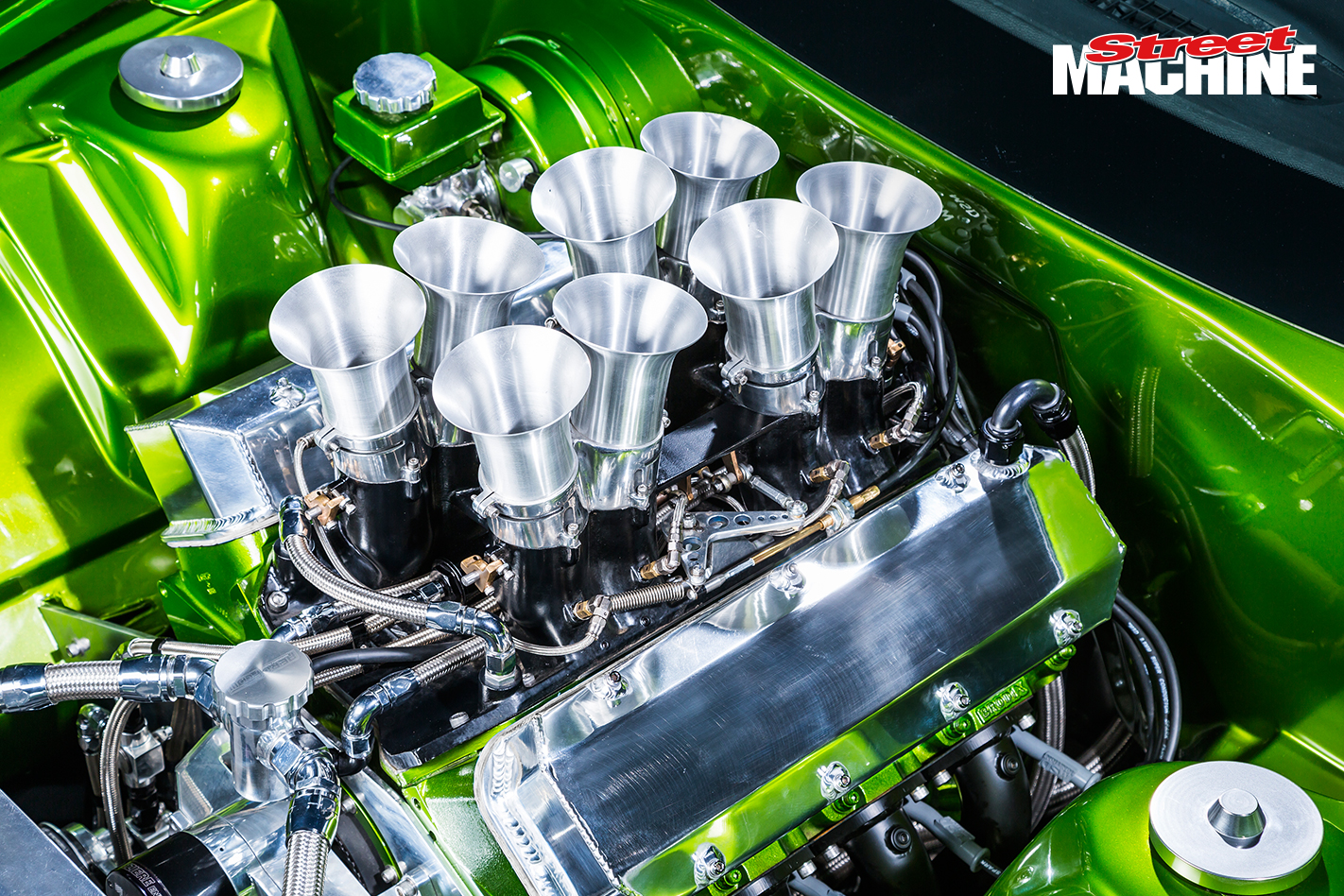 With 853 atmospheric ponies at 8500rpm, this big-block makes plenty of poke but still has the potential to rev all the way to 9500rpm!

On the dyno the high-winding big-block spat out 853hp at 8500rpm, with the power still climbing when they buttoned off; Steve is confident they can spin it harder still. “I’d like to turn it to 9500rpm, but we won’t know what it’ll be like until we get it out on the pad properly,” he says. “Everyone was just expecting another blower.”

Getting the hidden wiring right was a bit of a nightmare and they called in Chris from Race Wires to help – everything except the air conditioning and reverse camera works, and Steve reckons they’ll get the camera sorted soon. 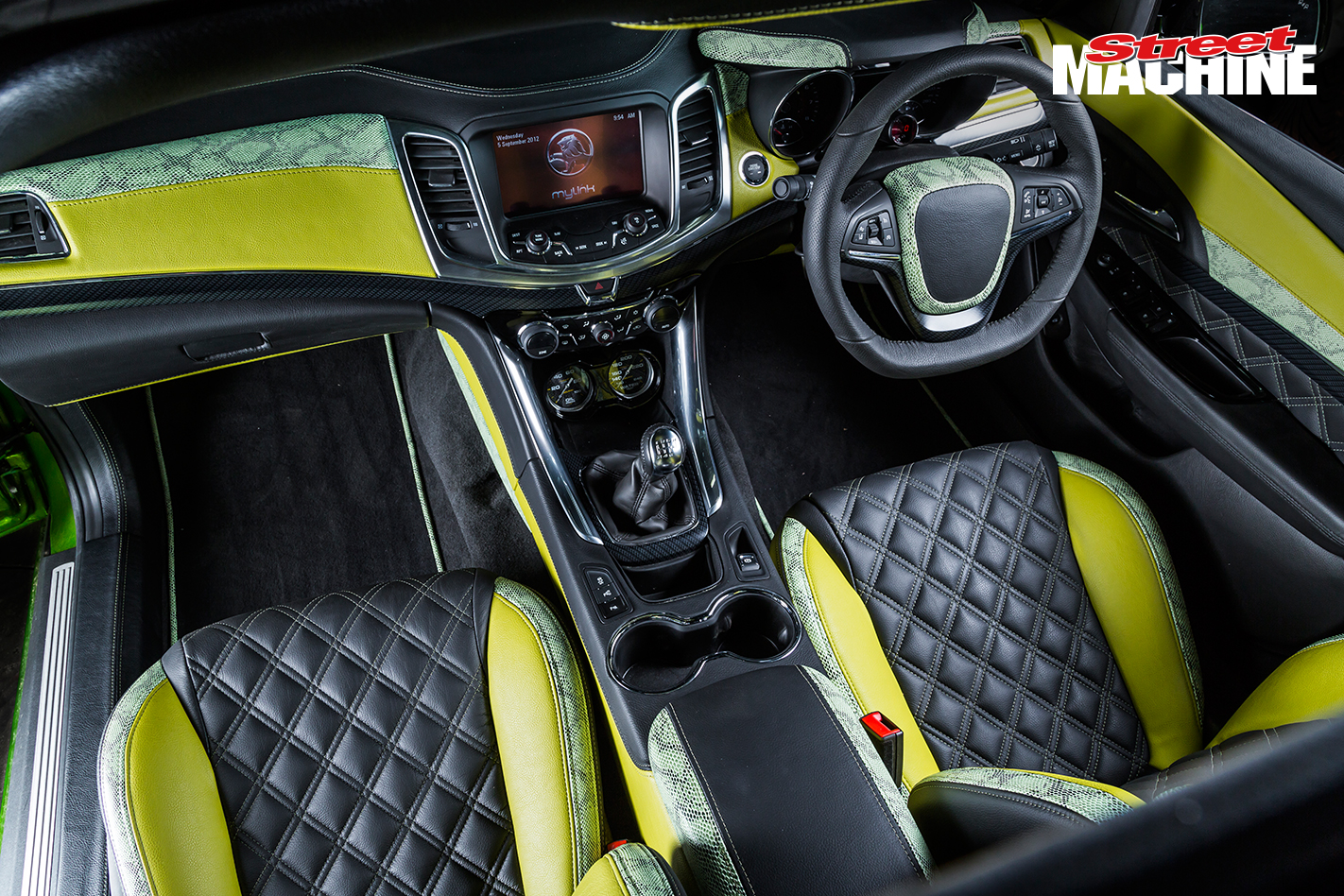 Originally the interior was going to stay factory, but with the custom paint looking so good, Steve couldn't help but dress up inside

The original idea, Steve says, was for the VF to just be a cool burnout car with a difference, but then the HOK Lurid Green paint went on and all of a sudden, the build changed direction. “It just came out so good. I was going to leave the interior original, but the car came up a lot better than I thought so we decided to do the trim as well. It took Danny from SOC less than two weeks to do it.” 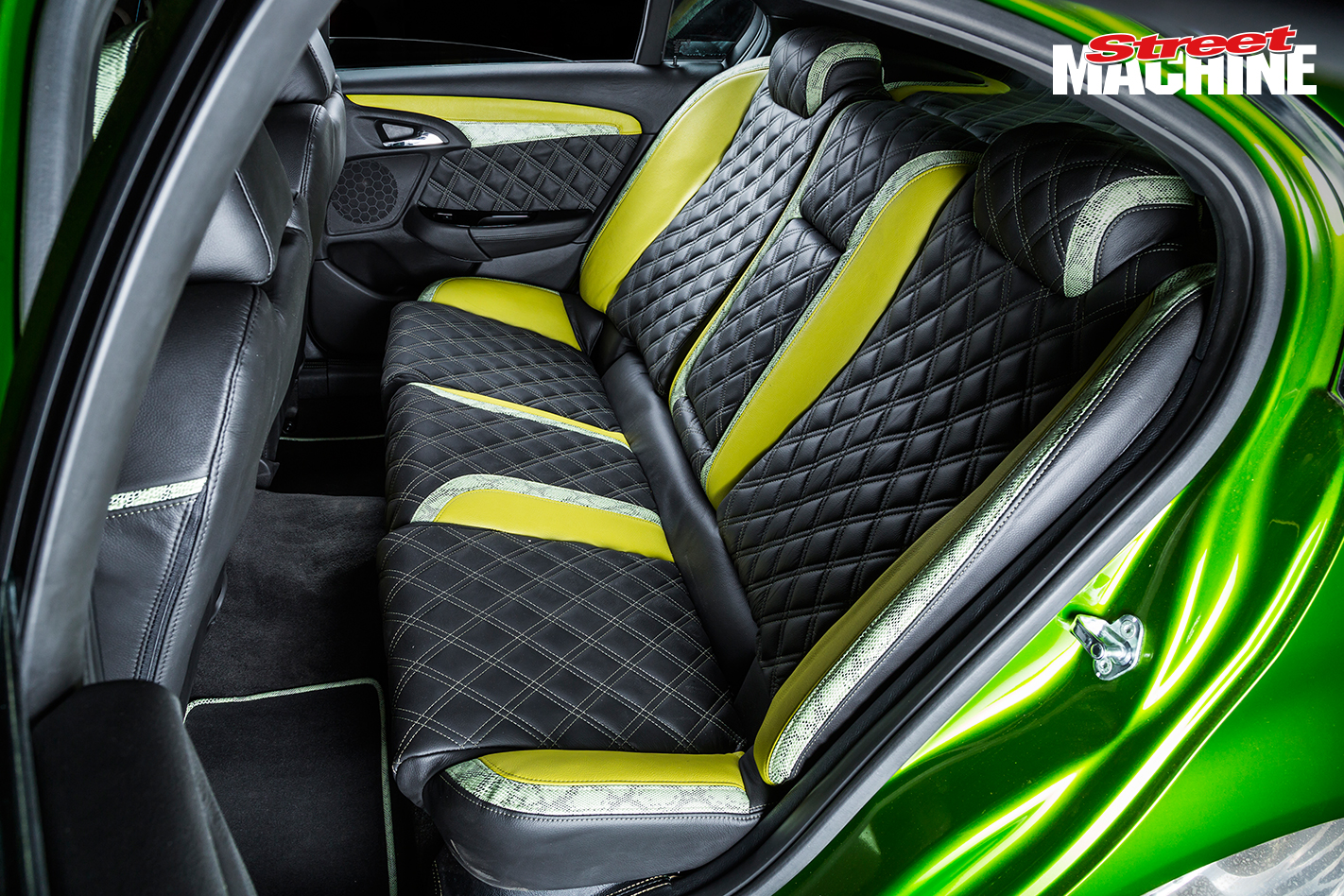 The Mustard and snakeskin inserts were a bit controversial at first, but with the car finished it looks great

Black leather covers everything, including the dash, with mustard and snakeskin inserts to break things up. The snakeskin look was a bit controversial among Steve’s mates. “When everyone first saw the snakeskin on the console, no one liked it,” Steve admits. “But when the seats and dash went in, it just worked.” The six-speed shifter knob fools a lot of people; they’ve mounted it to a B&M Pro Ratchet, but Steve reckons he had more than a few wondering if he still had a T56 in the transmission tunnel. Could you imagine that? Flat-shifting 532ci of screaming big-block! 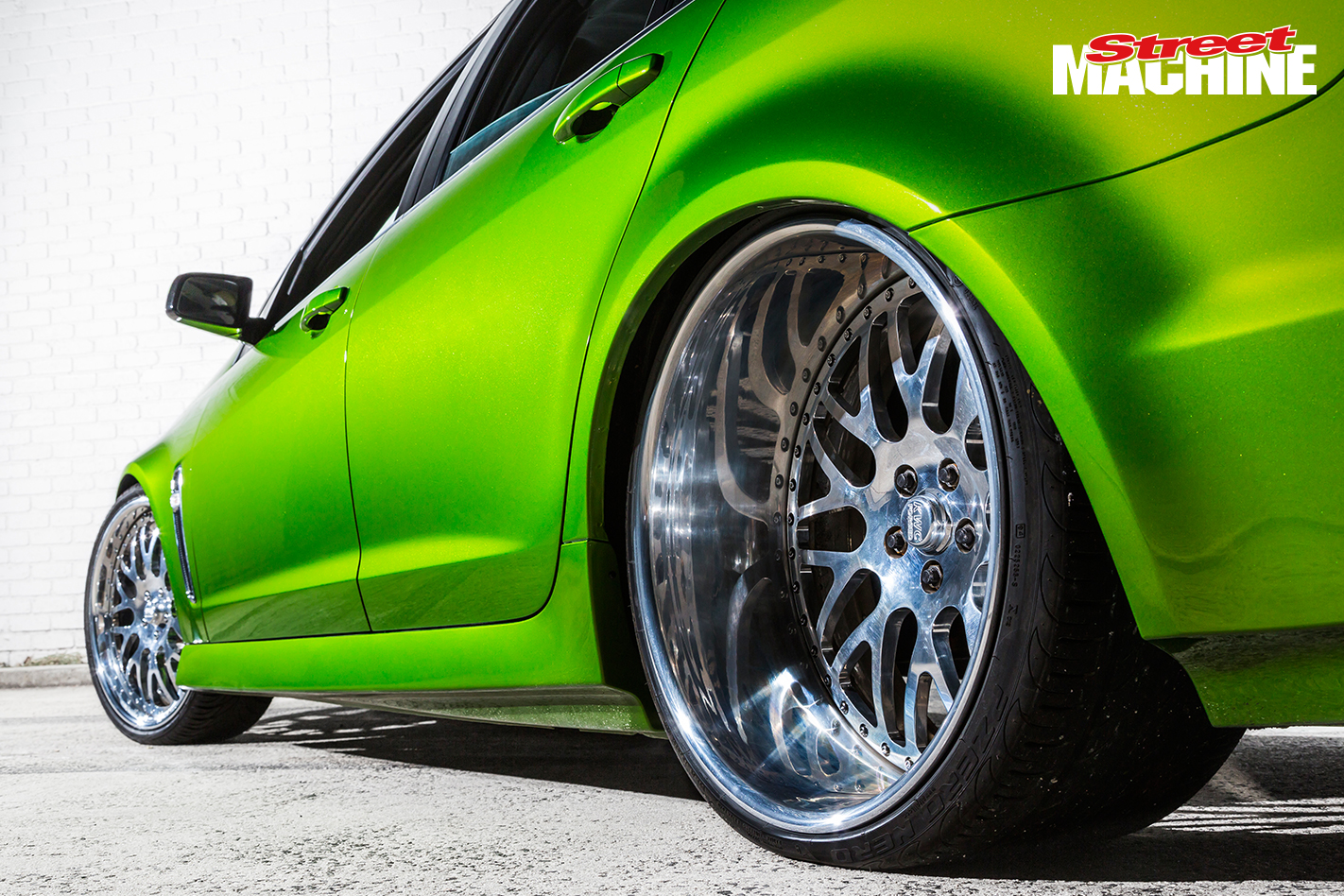 The whole build from start to finish took just 12 weeks. “We were pretty much done before Christmas,” Steve says. “But the problem was we were working on Jason Rose’s car too, so we were flat stick all the way to Summernats.” And that’s where Steve debuted the shimmering sedan. “It was pretty hard to keep it all secret,” he says. “A couple of shots did leak out, but generally most people were surprised when the covers came off it. This was my first time unveiling a car so I wanted to do it right. The pressure was on because at the end of the day it’s a Commodore, and you can’t go as far with something like this as you can with a hot rod or something.” 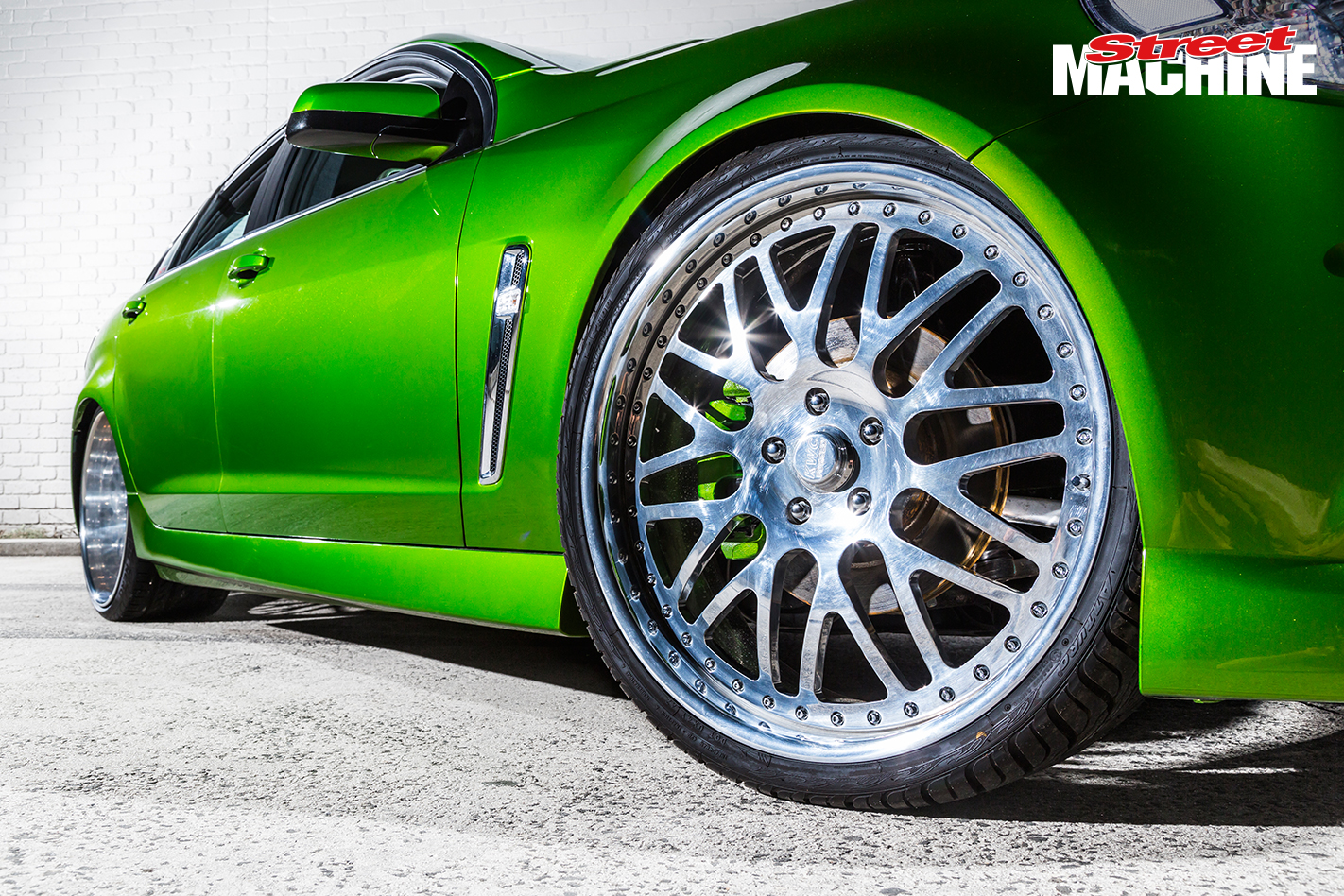 The car was originally an SS Redline with Brembo brakes, but the wreckers kept those so Steve fitted standard Commodore units

We reckon Steve’s underselling himself, because it looks pretty amazing to us – if it was easy, everyone would be doing it. Truth be told, Steve is pretty happy with the result too. “I did regret selling UNLOAD for a little bit, but now I’ve got this, I don’t, because this is a better-built car,” he says. 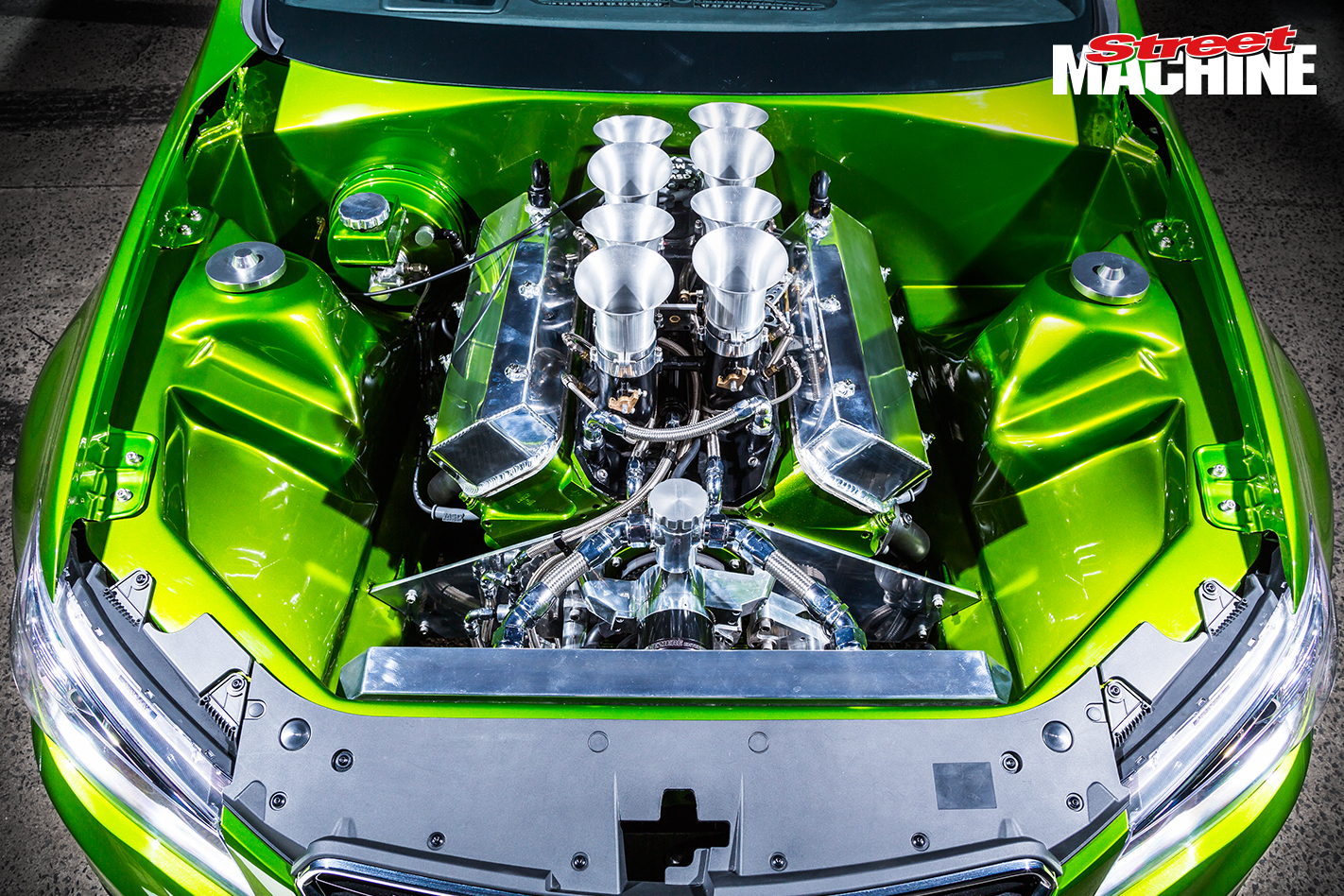 Under the big motor sits a VE K-frame and steering rack, instead of the bulky electric steering system fitted to the VF

But not everything went Steve’s way at Summernats; low battery voltage was messing with the ignition so he didn’t get a chance to stretch the green machine’s legs in front of the Canberra crowd. In fact, with UBC#7 rained out, Steve had to wait until Brashernats Sydney to have is first proper skid in the car. With Summernats 29 now approaching, Steve is getting the car ready to compete in the Last Chance Shootout Wild Card burnout comp on the 7th of January. His other ride, UCSMOKE, is already in the main burnout series. 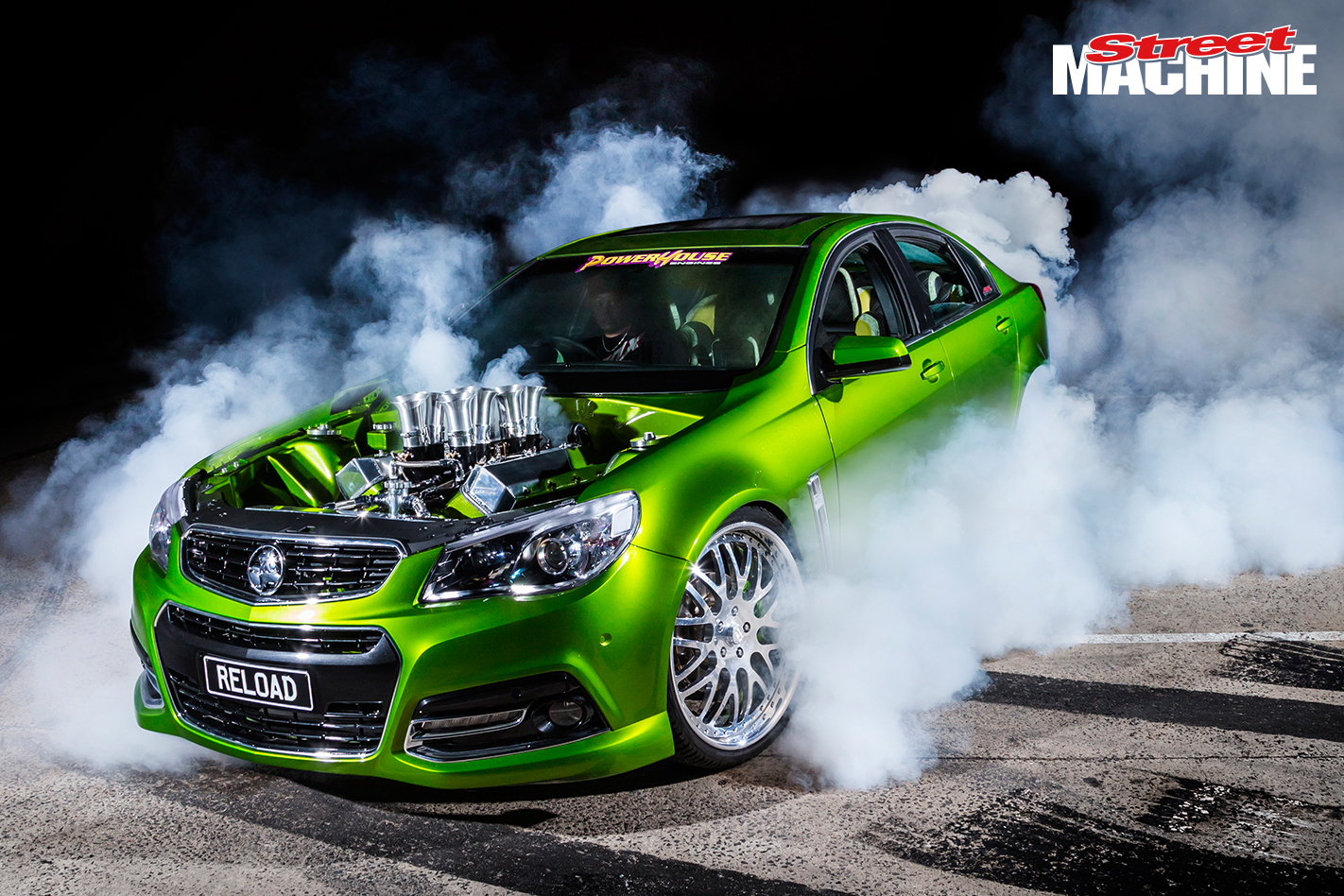 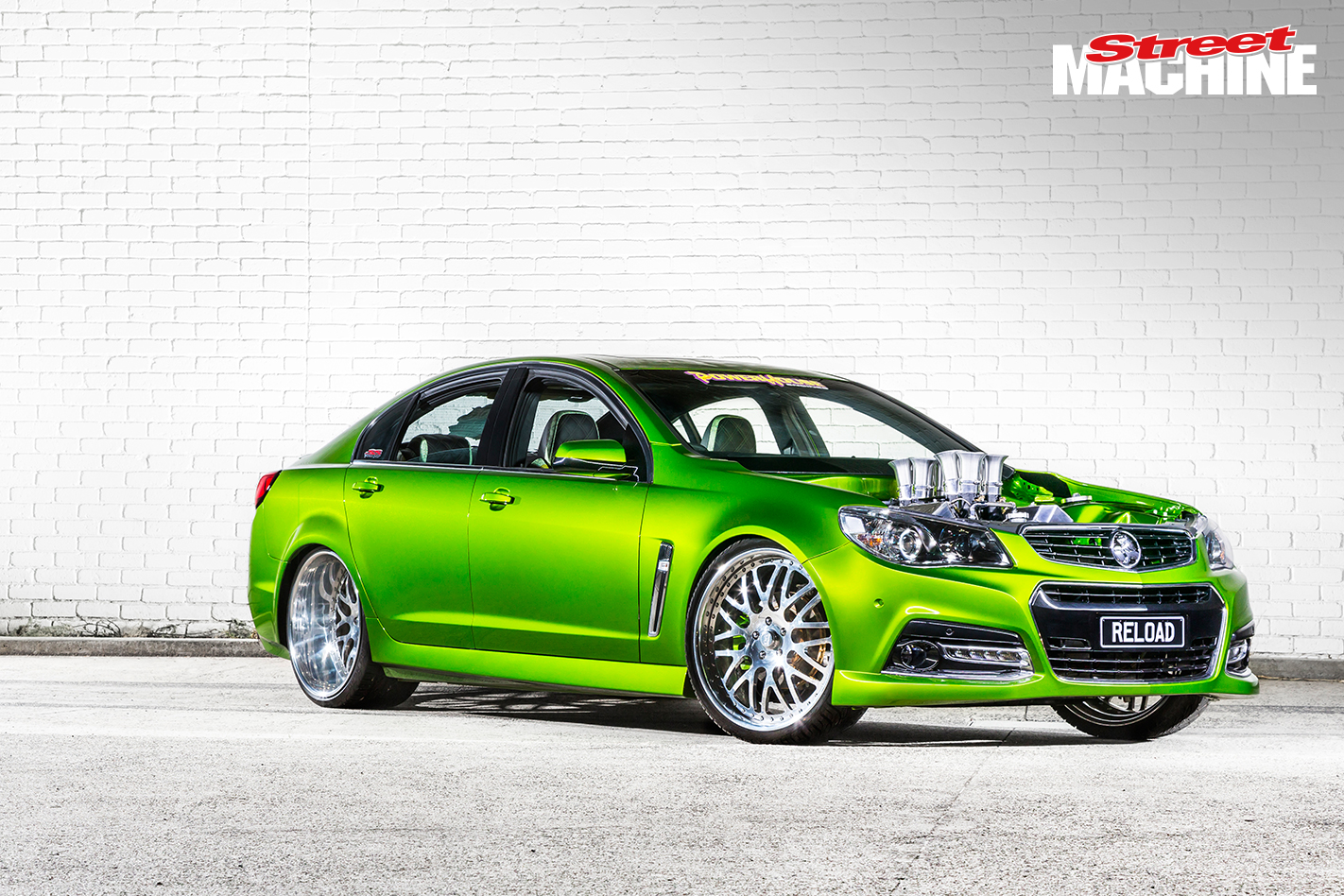 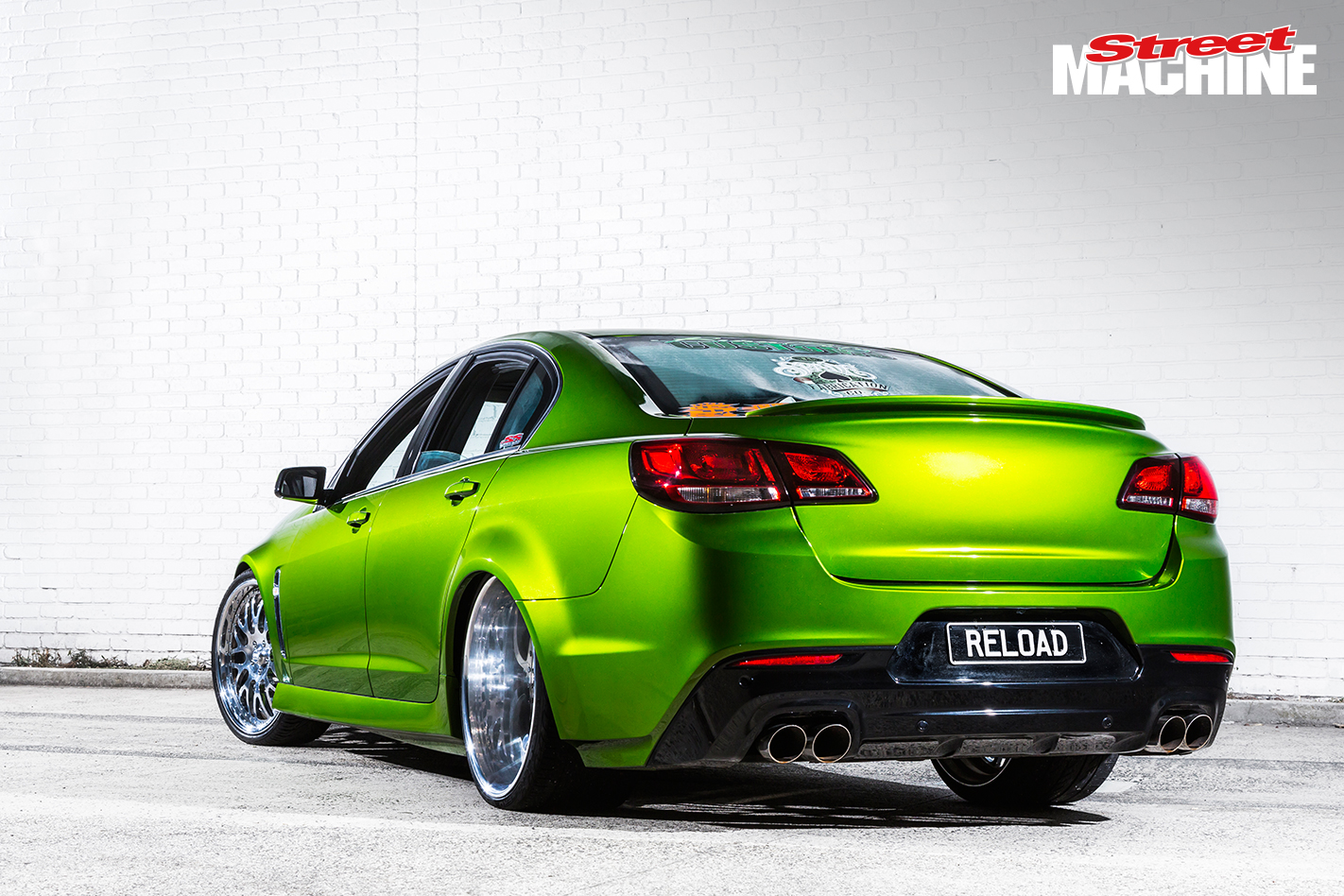 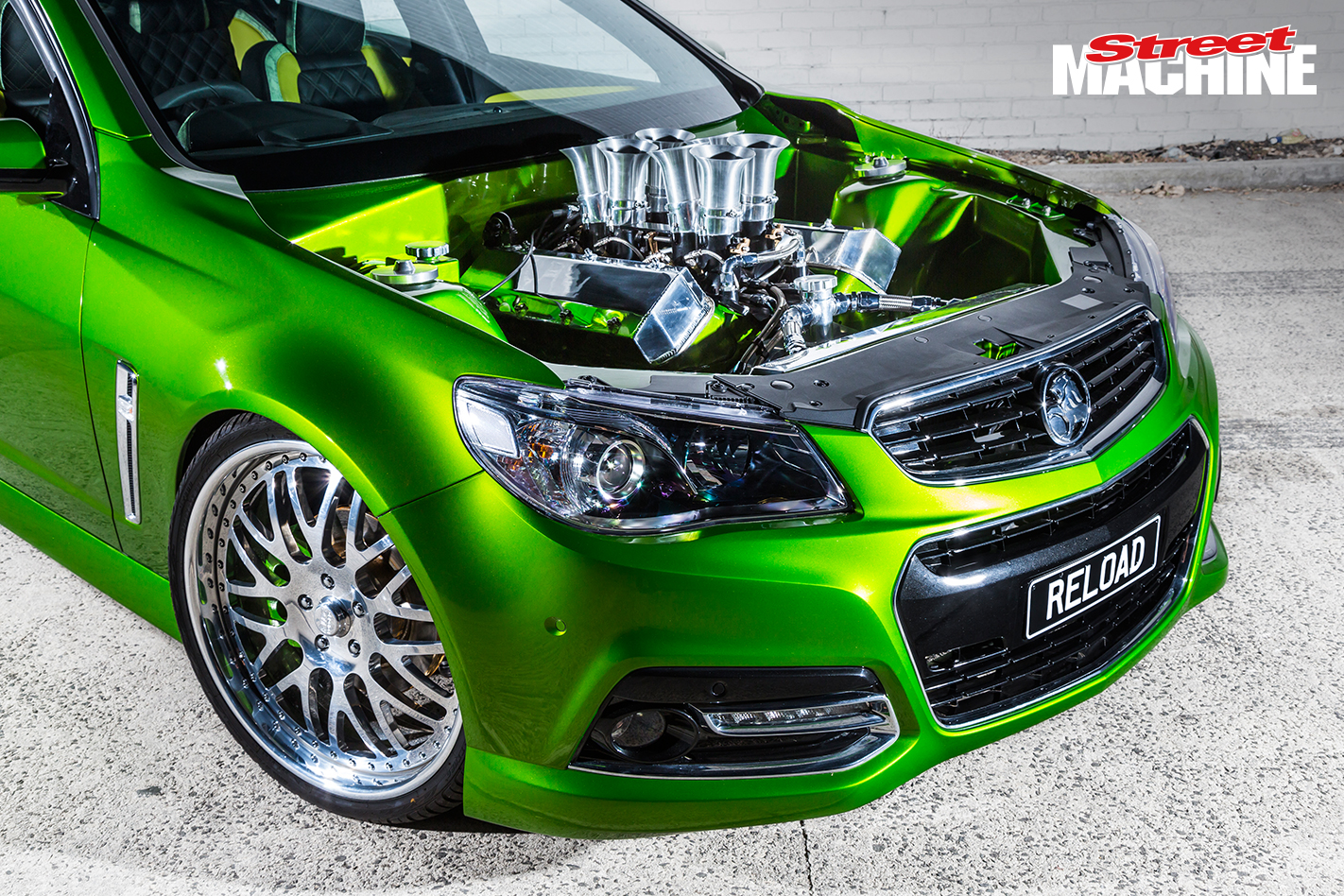 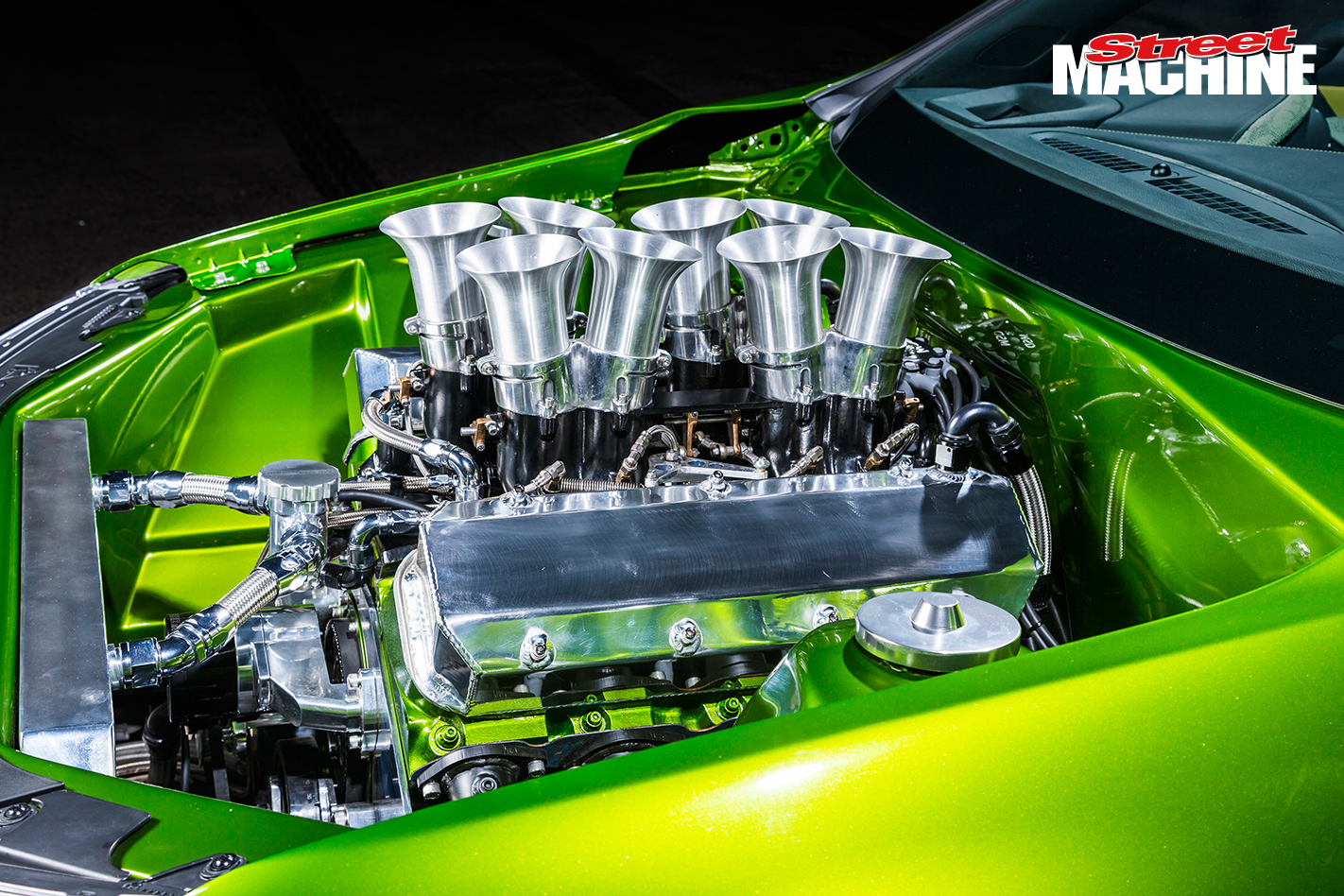 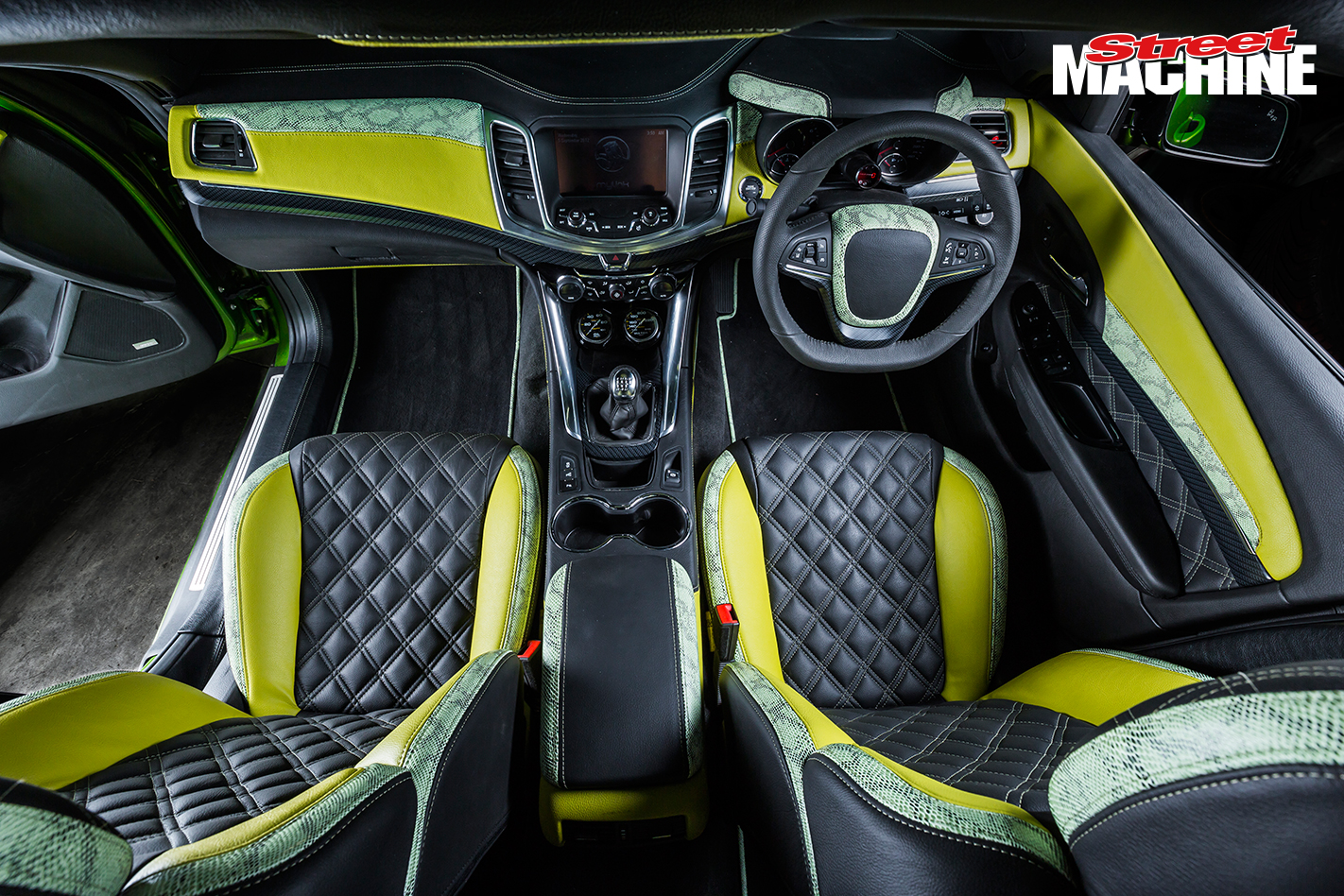 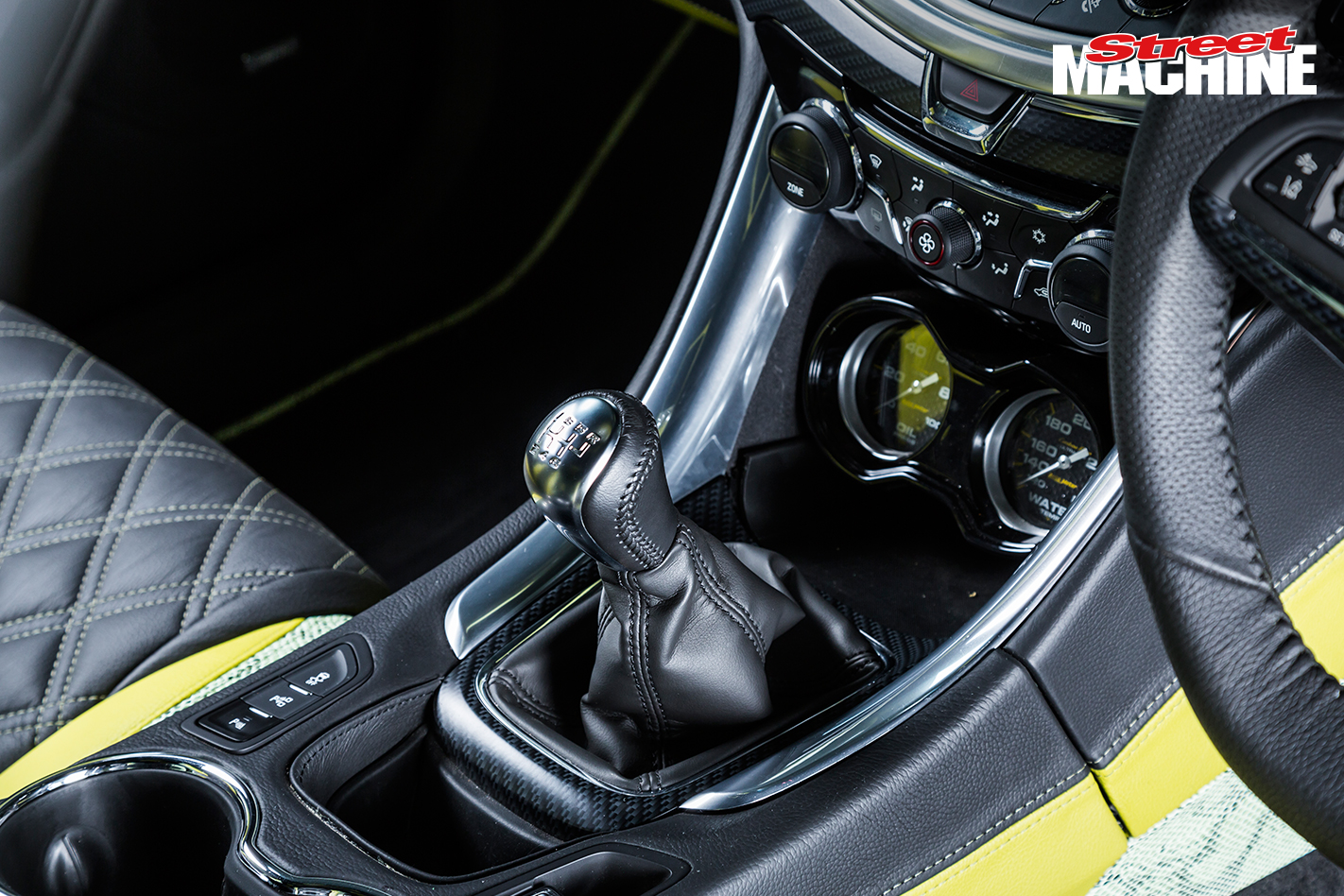 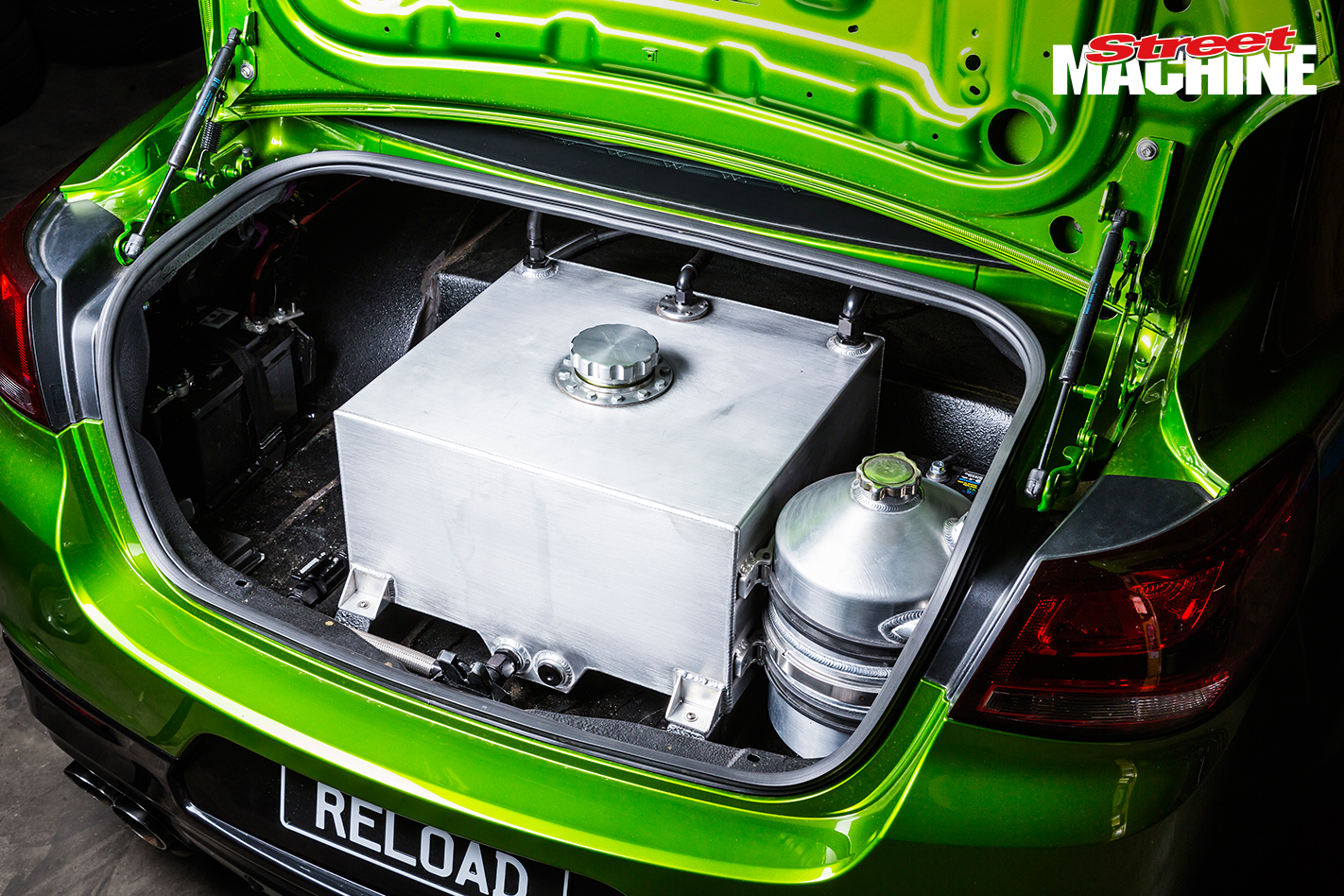 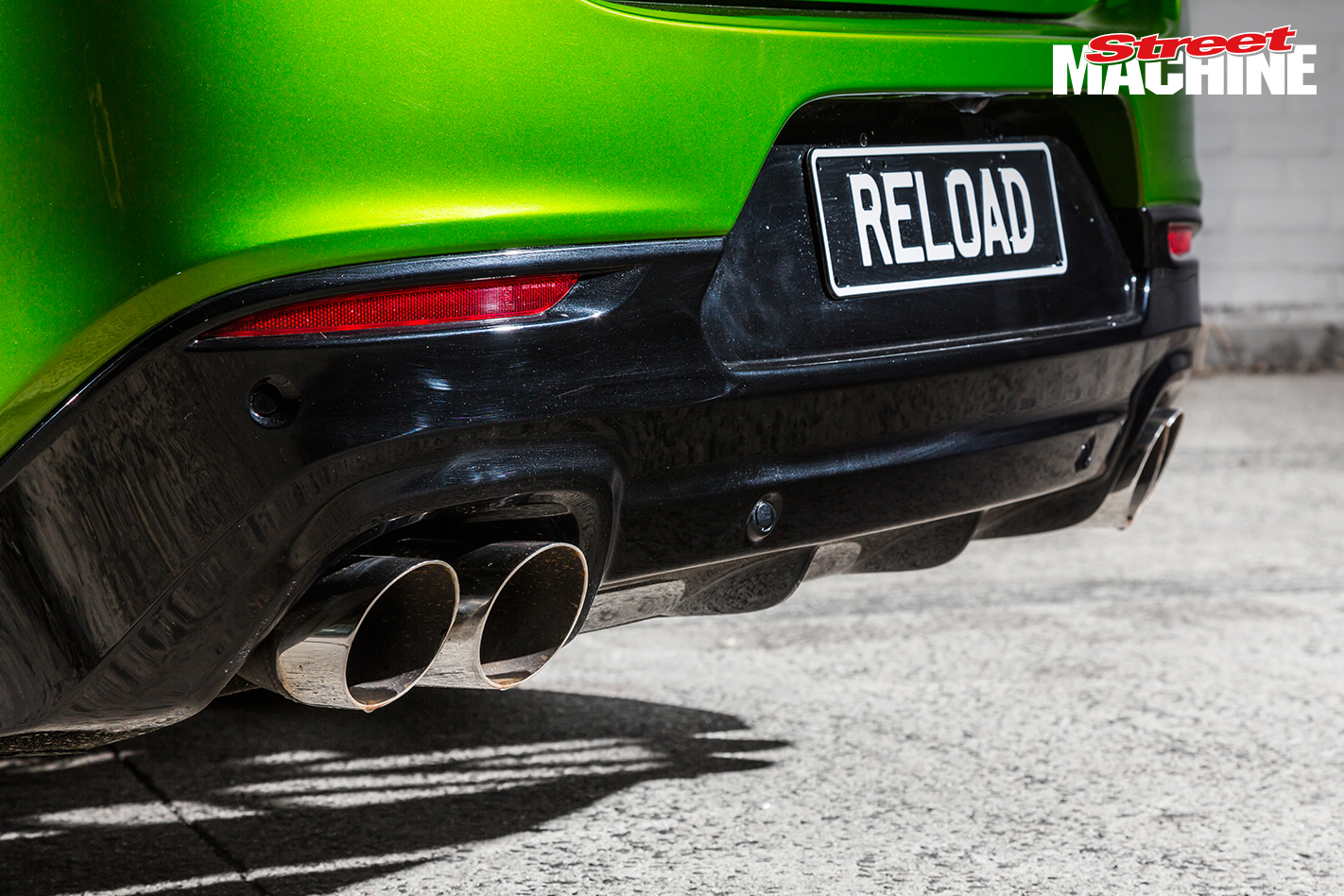