PICTURE this: It’s Summernats 28 and Southern Rod & Custom is showcasing this sensational XP Falcon coupe in the PPG marquee. An elderly lady strolls up to one of the PPG representatives manning the stand and says: “Excuse me sir, I’d like the keys to my XP coupe please.” “Er, I’m sorry ma’am, the car belongs to some lucky bloke from WA,” the PPG guy replies. “Yes, I know,” she responds. “He’s my son; I gave it to him 15 years ago and now I want it back!” 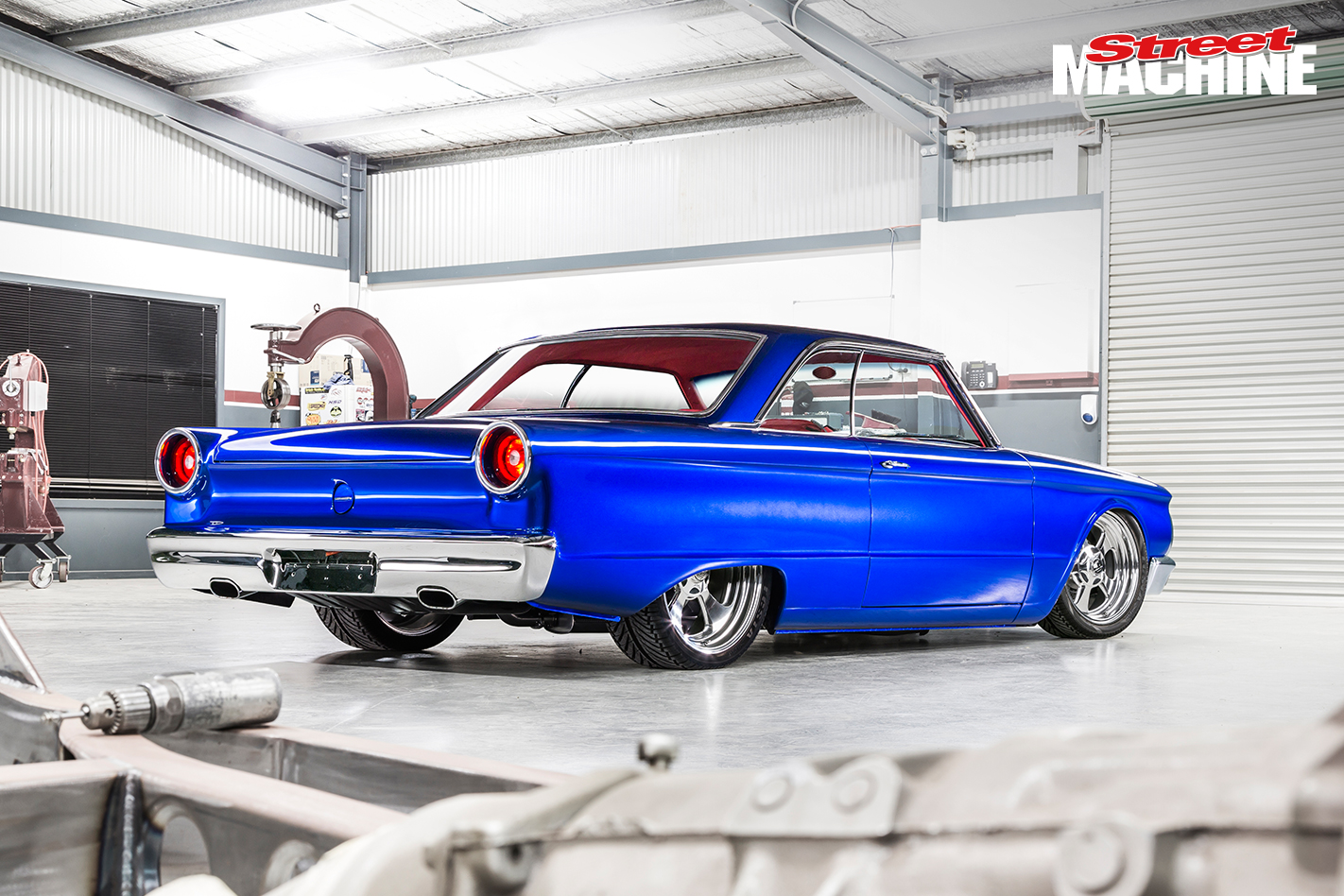 Dean Weldon is the aforementioned “lucky bloke from WA”, and he confirms that the XP was in fact his mum’s old shopping trolley. “As a kid, she would drop us off at the school bus stop every morning in it,” he says. “It’s been in the family for more than 35 years.” 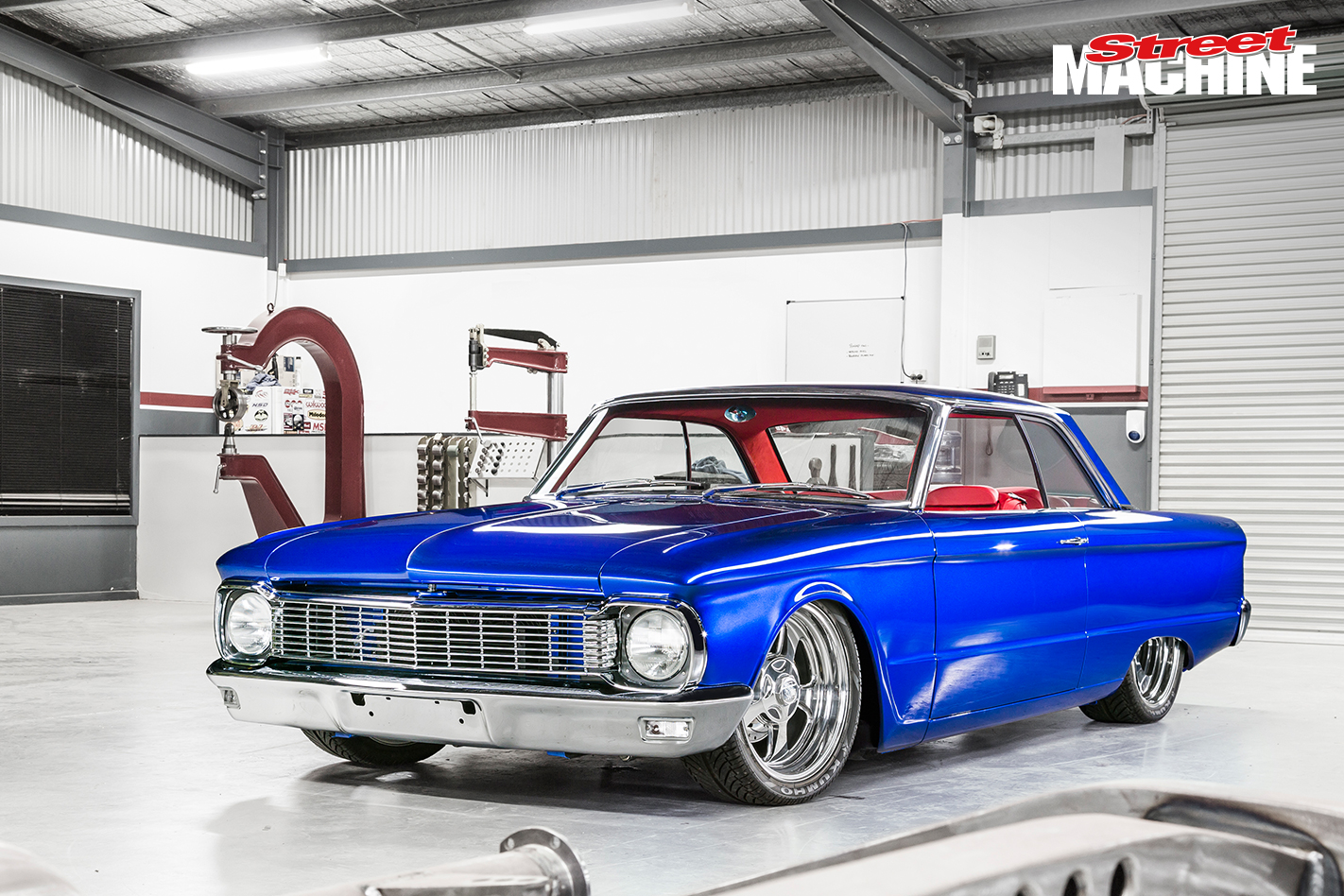 When Mama Weldon tossed the keys to Weldon Jr in the late 90s, the coupe was somewhat the worse for wear: lots of rust, a tired six, rough interior and a dodgy respray. Dean is good friends with a bloke called Les Lawry, and sought his advice on what he should do. Known as The Rodfather, Les is a two-time MotorEx Best of Breed champion and a guy who knows a thing or two about good cars. He quickly assessed that Dean’s aspirations far exceeded his ability and introduced him to Shane Rowe from Southern Rod & Custom (SRC). 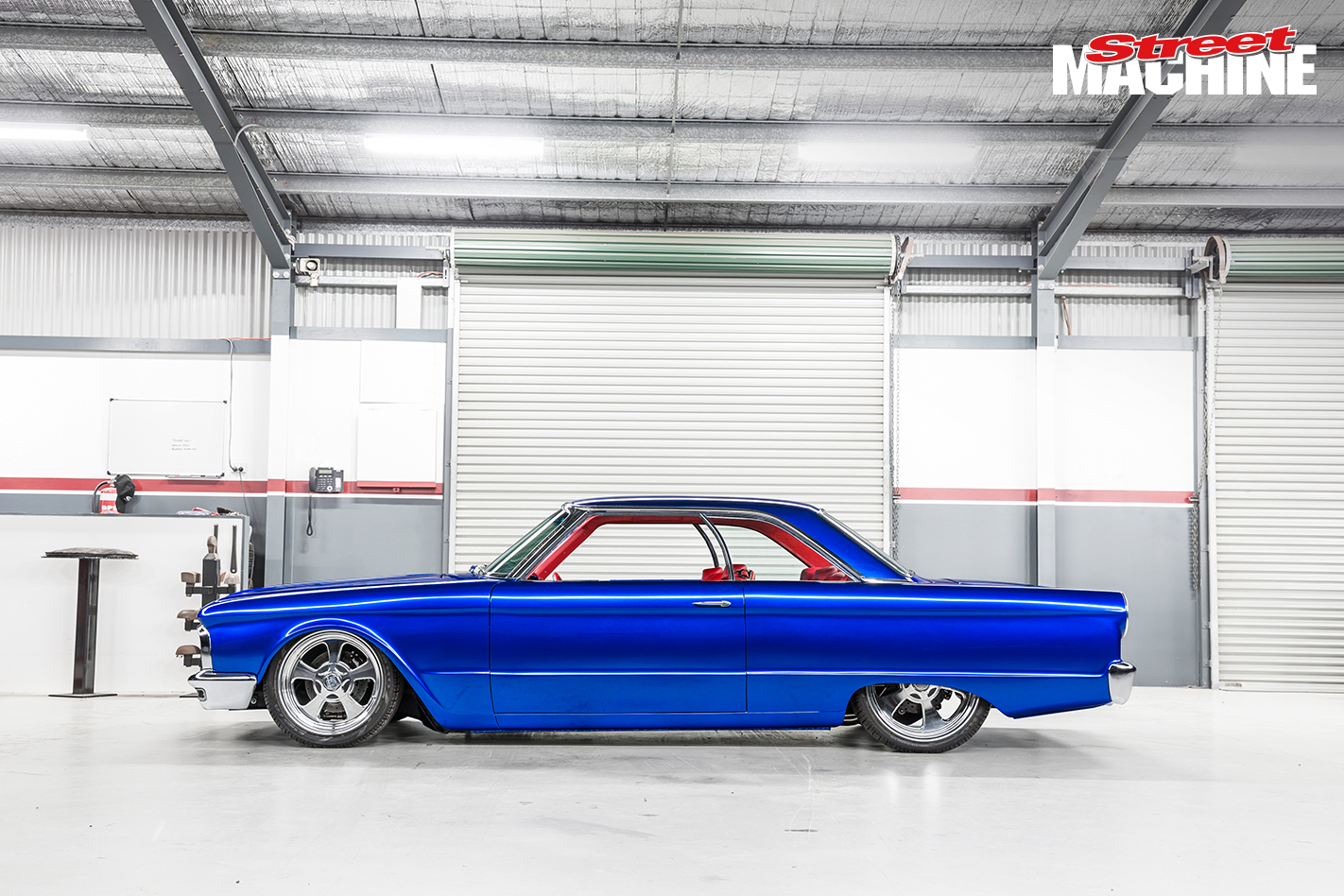 When approached about the build, Shane replied: “I’m booked out for five years. Park it up and I’ll call you when I’m free.” Sure enough, four years later Dean’s phone rang and Shane told him to bring it on over. 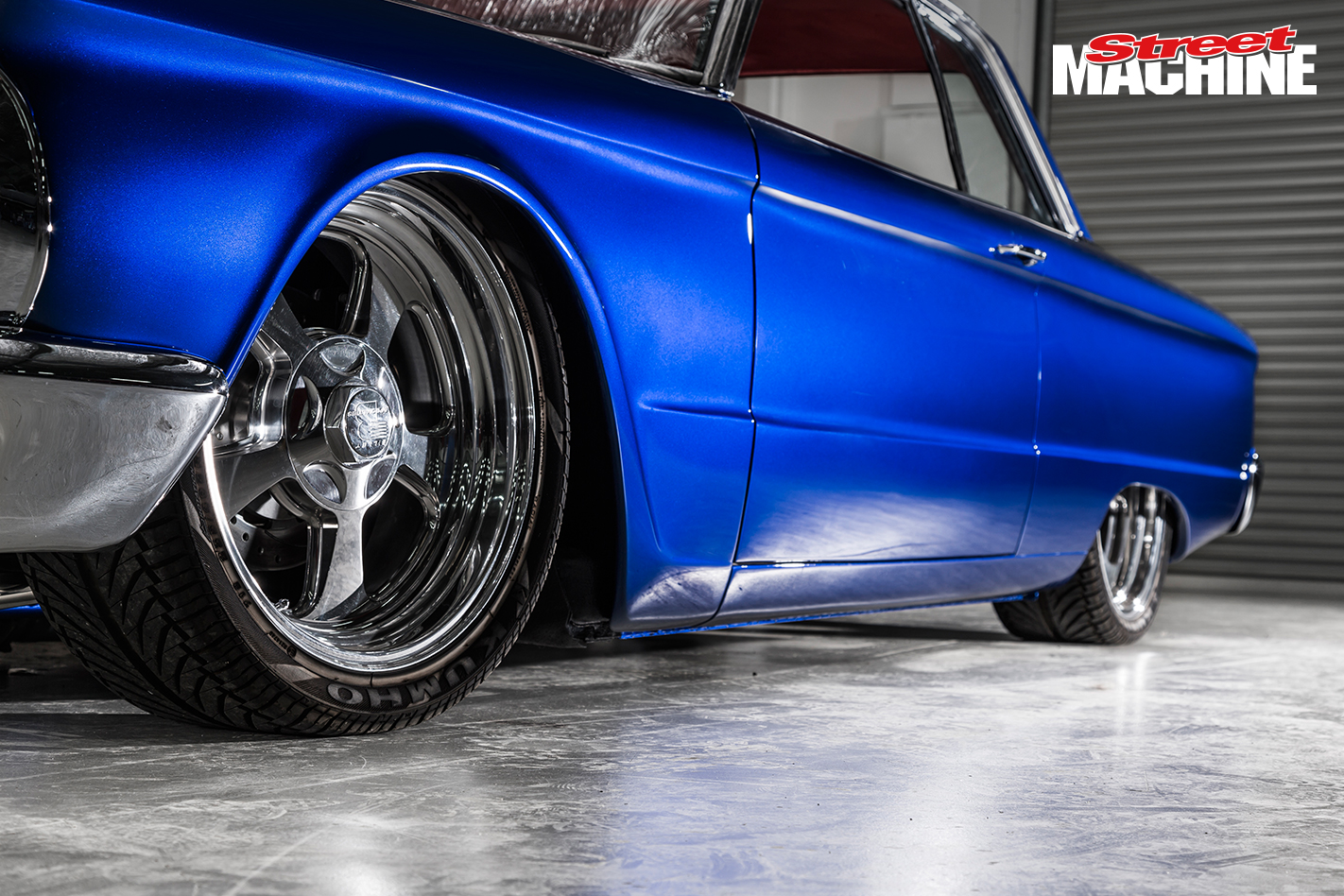 Dean was pretty clear on what he wanted: “Take some modern-day exotica and slap a 60s body on top. Sure, a lot of people are doing that now, but when we started this project 10 years ago, nobody was doing this kind of stuff. It had to drive nice, with air conditioning and power windows.” “I’ve always loved the cars that Bobby Alloway builds,” Shane says. “I base my builds on a shrewd piece of advice he gave me many years ago: Start with the wheels and build the car around them.” 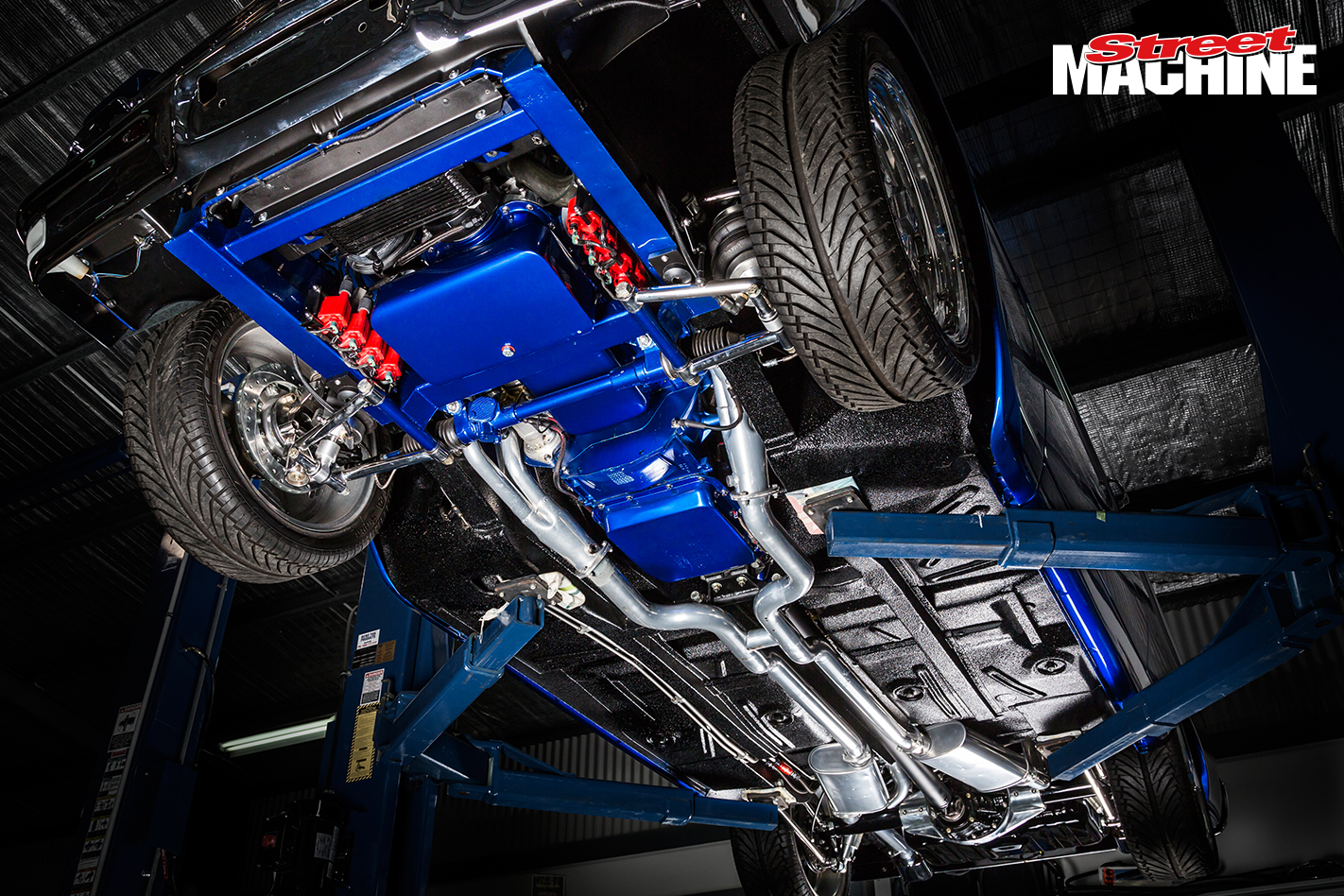 This is exactly what SRC did with XPensive. The 18- and 20-inch wheel combo (radical stuff for 2005) was set up on a chassis jig inside the gutted shell and moved around until the desired look was achieved. 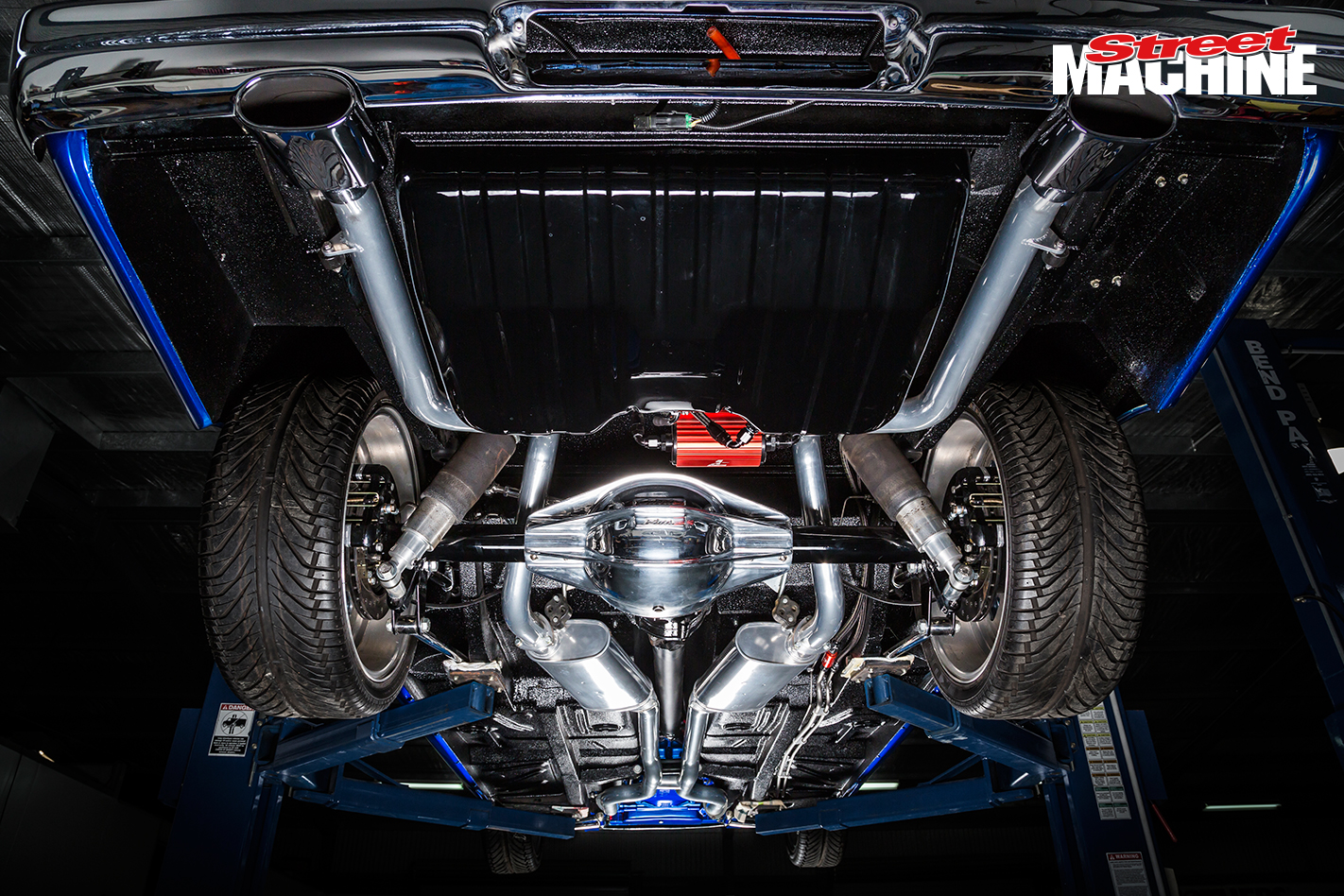 Rather than trying to re-engineer the stock suspension to suit, SRC pulled out the factory towers in favour of a Rod-Tech double A-arm set-up (same width as a ’34 Ford) complete with rack-and-pinion and Air Ride Shockwaves. Not only does this allow the XP to ride nice and ultra-low, it also added a ton of extra room in the engine bay. Out back, the mini-tubs extend right up to the parcel tray, while the original leaf springs made way for a four-link set-up and Shockwaves. “By building everything around ride height, the suspension operates in the sweet spot,” Shane says. “You get full bump travel, nothing fouls, nothing binds yet it sits on the deck and drives nice.” 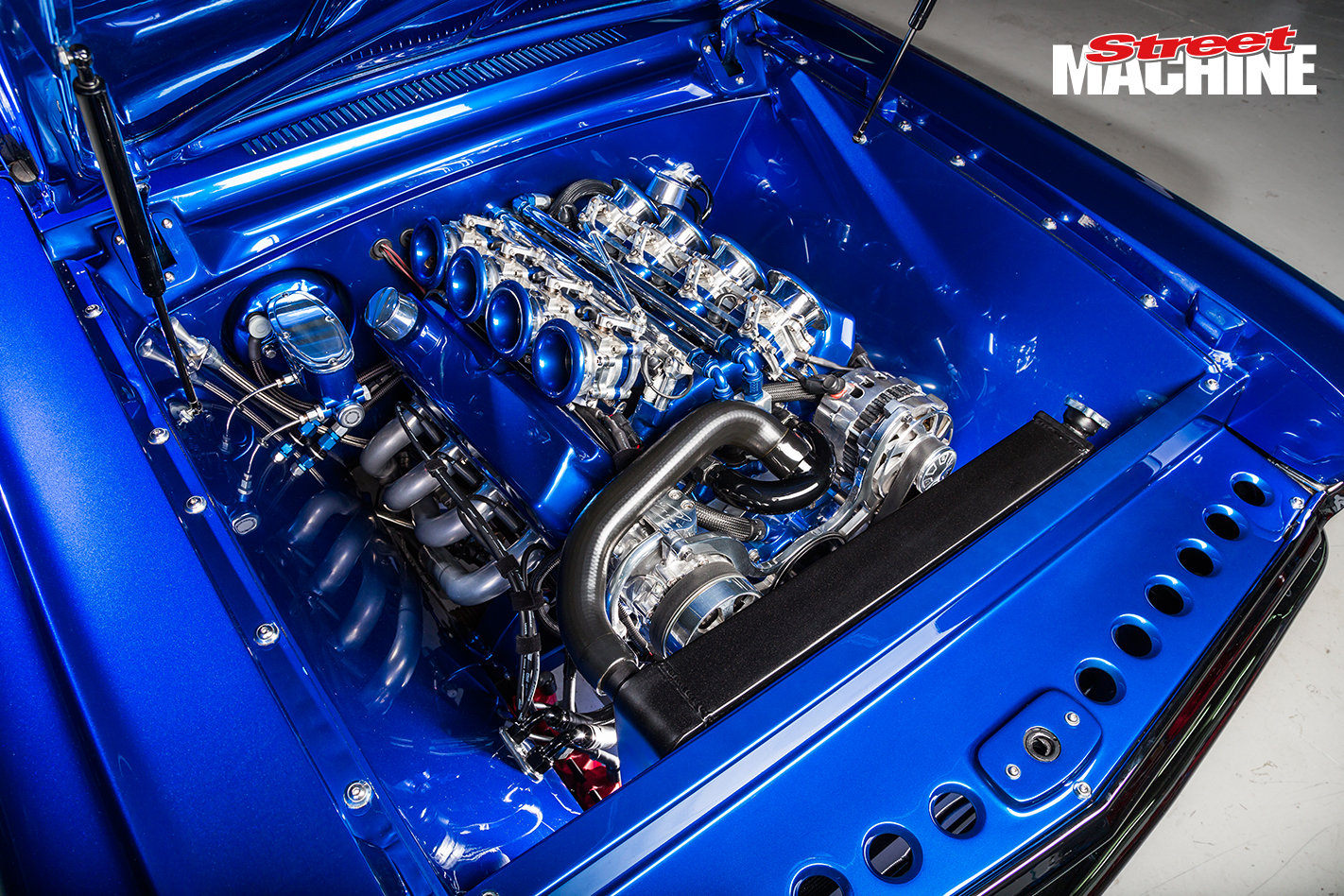 To accommodate this hunkered-down stance, the front wheelarches were radiused and moved up 60mm. Body mods don’t end there; the factory hipline and lower swage converge as they make their way rearwards, but SRC hand-fabricated new quarters, door skins and front guard sections so that these two body lines now run parallel the full length of each flank. Up front, the guards nose down 50mm, which required extensive modifications. The lowered headlight surrounds needed to be scalloped into the top of the bumper bar – which itself was slimmed down before being cut and tucked into the body. 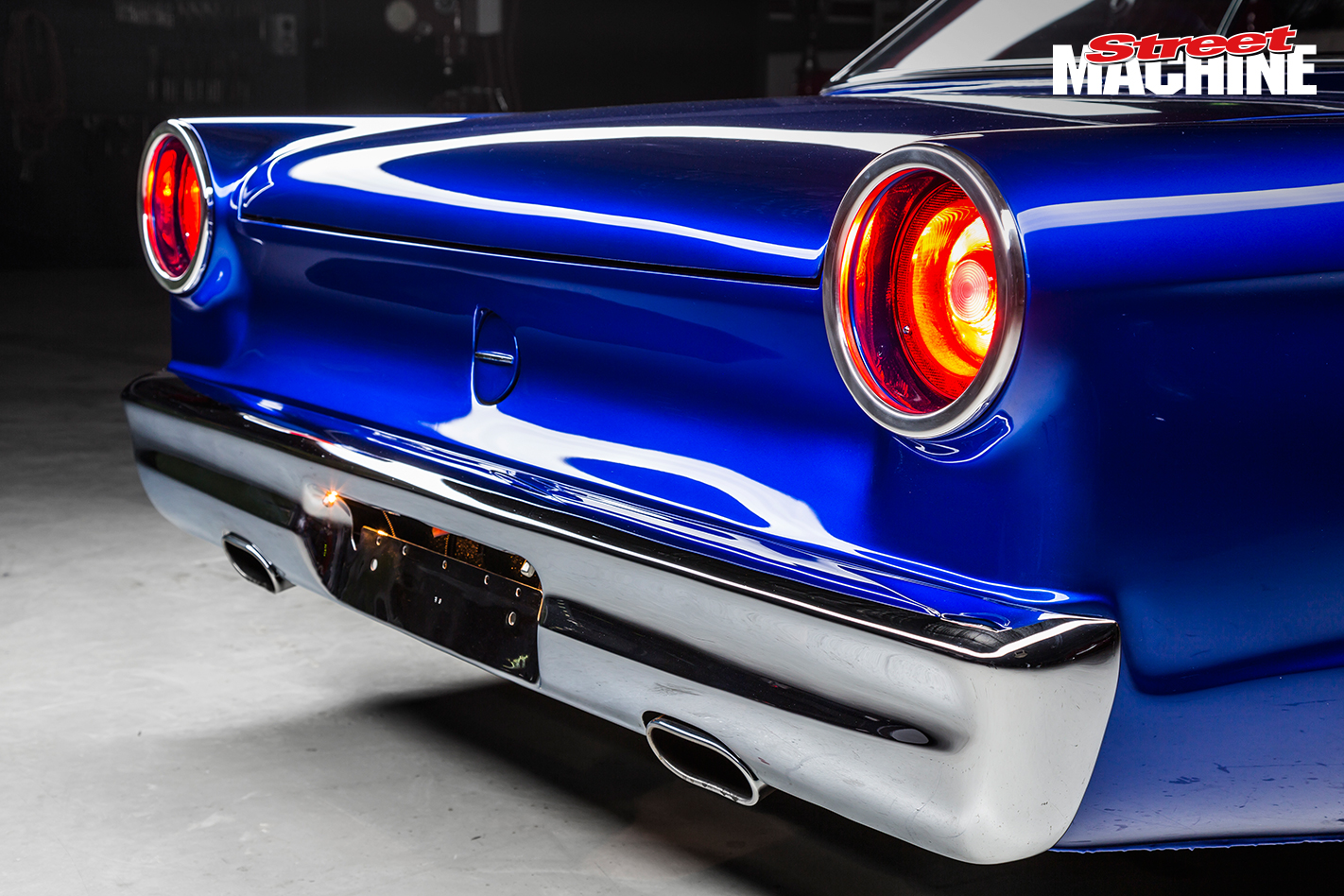 Shane always thought the XP coupe looked like a baby ’61 Galaxie Starliner. To enhance the similarity and give it that big tail-light look, larger-diameter Ranchero tail-lights were grafted into place. Unfortunately the Yankee ute lights have no provision for amber blinkers. To remedy this, the centre of the Ranchero lens was bored out, a matching disc was cut from a Hella trailer lens, then glued in place. To isolate it from the surrounding glow from the ring of red LEDs, an aluminium tube was affixed to the internal reflector. The clear insert illuminates with amber LEDs. 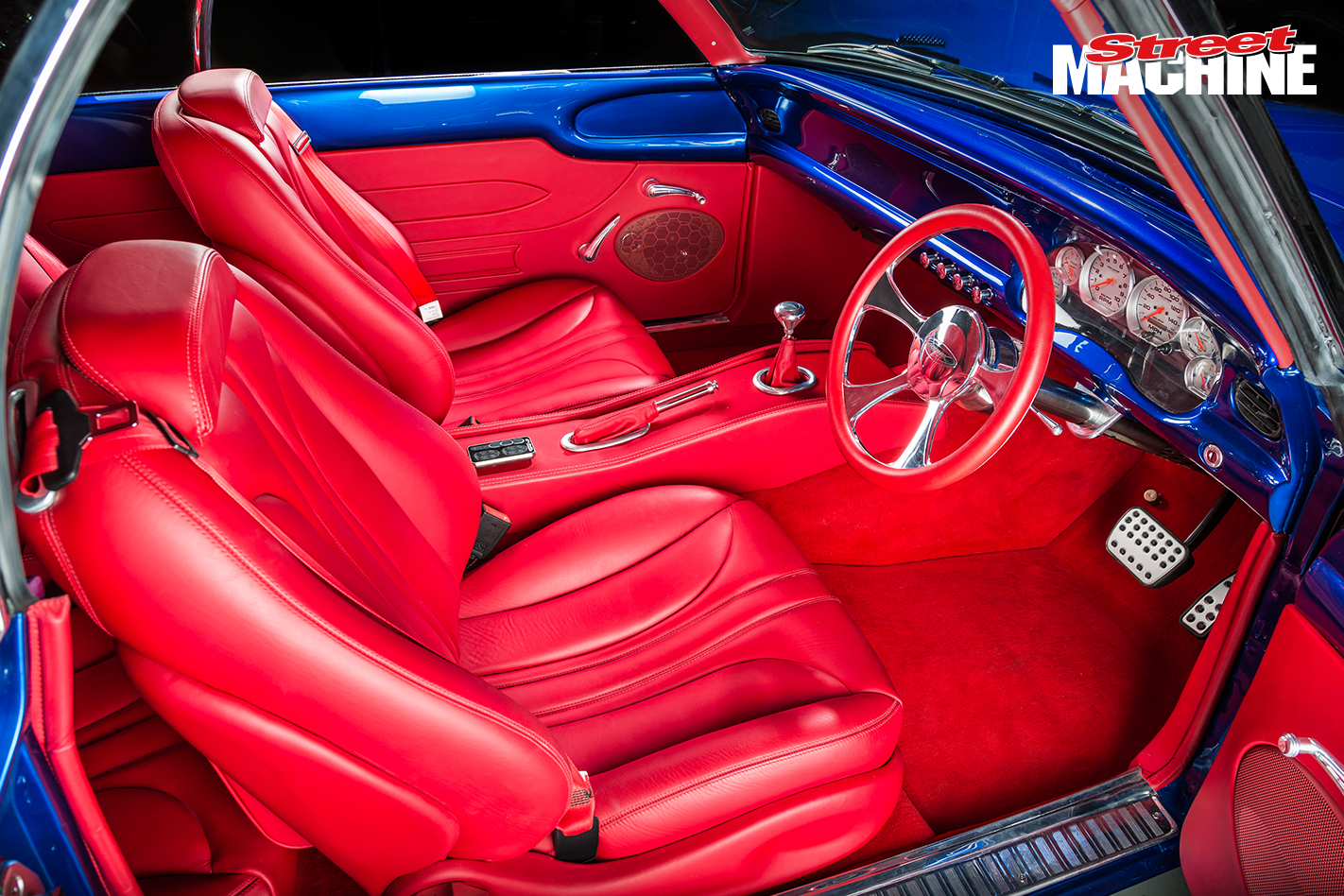 Old-fashioned quarter-vent windows are the pet hate of many, including Dean and Shane – XPensive was always getting custom side glass, sans quarter glass. However Shane decided to go one step further by adding a groovy swept-back curve to where the front and rear glass butts together. “I think I saw it on a custom car in the States,” he says. “I thought it looked trick and that it would really suit the XP.” You have to admit the mod gives the car a nice custom flavour. 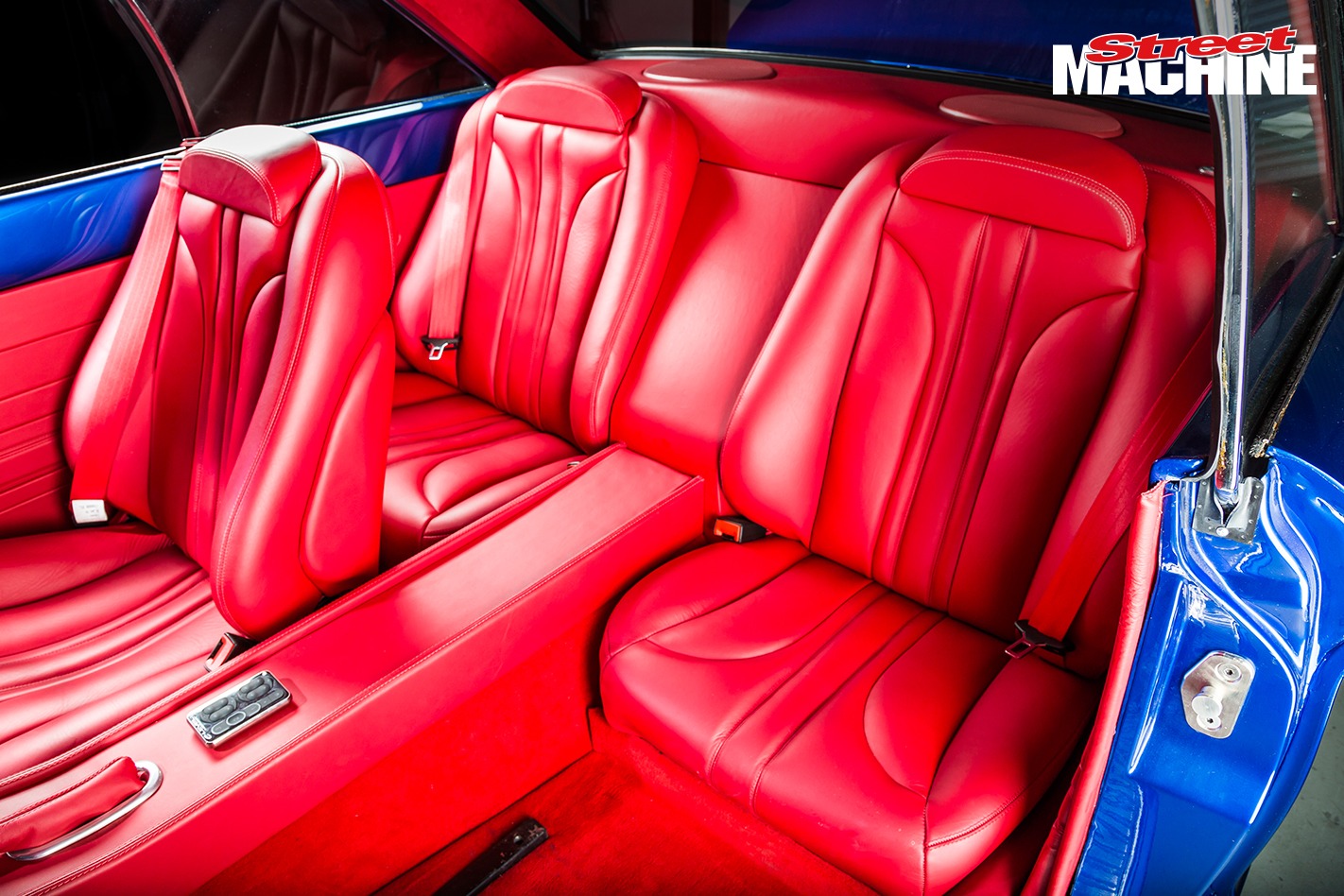 That Morrison eight-throttlebody injection system looks pure circuit racer, but the 347 Windsor is far from a track animal. Based on an Aussie injected 5.0-litre block, it sports a mild cam, long-arm crank and Edelbrock alloy heads. The radically changed engine bay, combined with the lowered engine height (for the injection to clear the bonnet), called for custom headers. A Wolf 3D ECU brings it all to life. Deniliquin Offroad & Marine Engineering screwed it together and gave it a little tickle-up to boost output to around 500hp. “That might sound a bit puny compared to all these 1000hp big-blocks,” Dean says, “but I just wanted something that was reliable.” 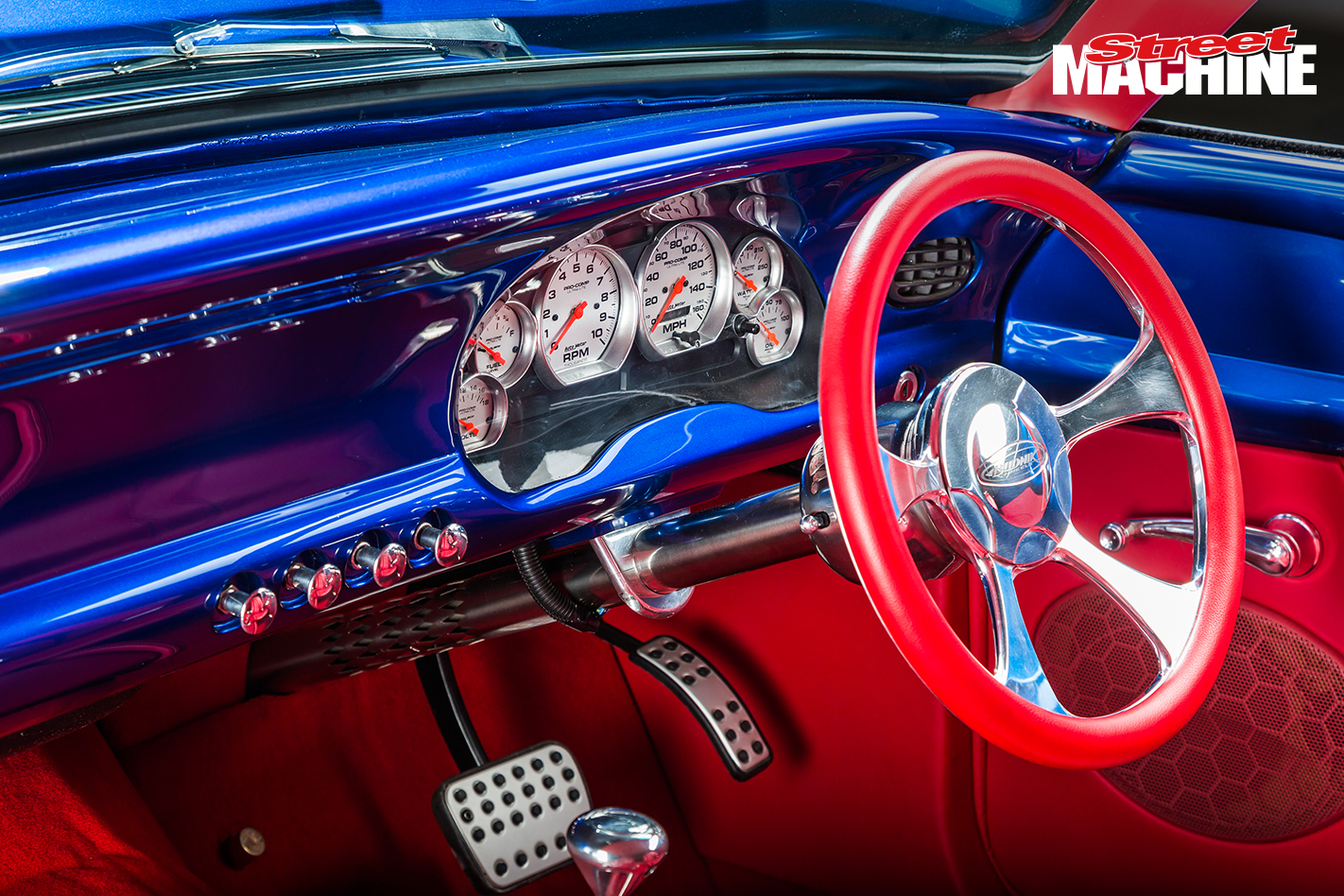 With acres of bright red leather, incorporating a clever design and some skilled stitching, Mick’s Custom Trim has transformed the interior. The front Mercedes buckets feature integrated lap-sash belts, and the driver keeps tabs on things via an array of Auto Meter gauges mounted in a fascia intended for a 2005 Mustang. Tucked up under the custom-fabricated dash (which SRC loosely based on the original XP) is a Vintage Air Space Saver unit that works with a Sanden compressor incorporated into the Billet Specialties Tru Trac accessory system. Sitting in behind the AU Falcon grilles in the doors and parcel tray are six-inch splits that work with the boot-mounted 12-inch subwoofer and two power amps. 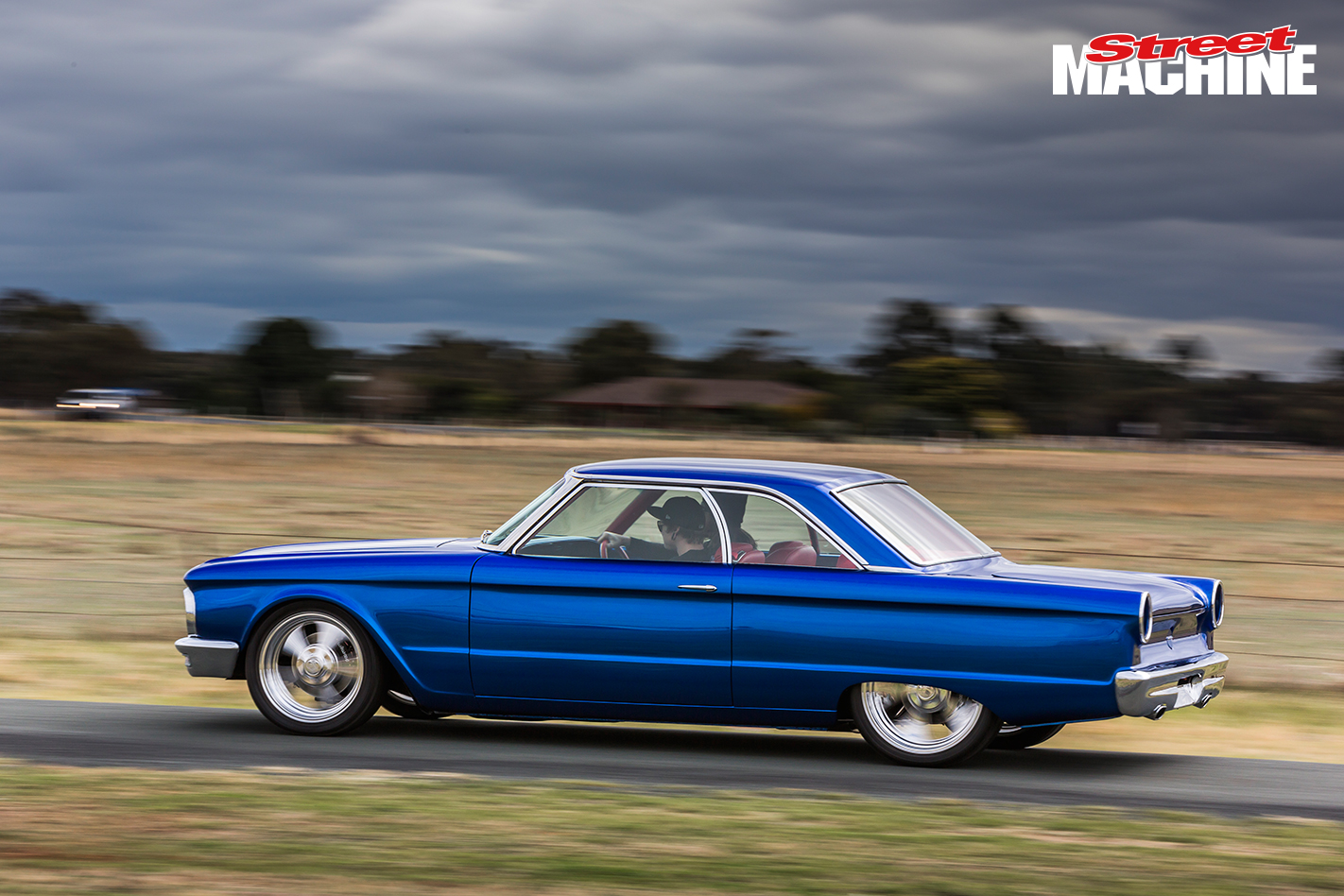 Colour selection started out pretty straightforward – “make it match my Harley” was Dean’s instruction. But after spraying out a few test panels, the hue was deemed to not have enough balls. With the help of PPG, SRC started playing around with the colour before settling on the stunning custom pearl you see before you. It really is attention-grabbing. 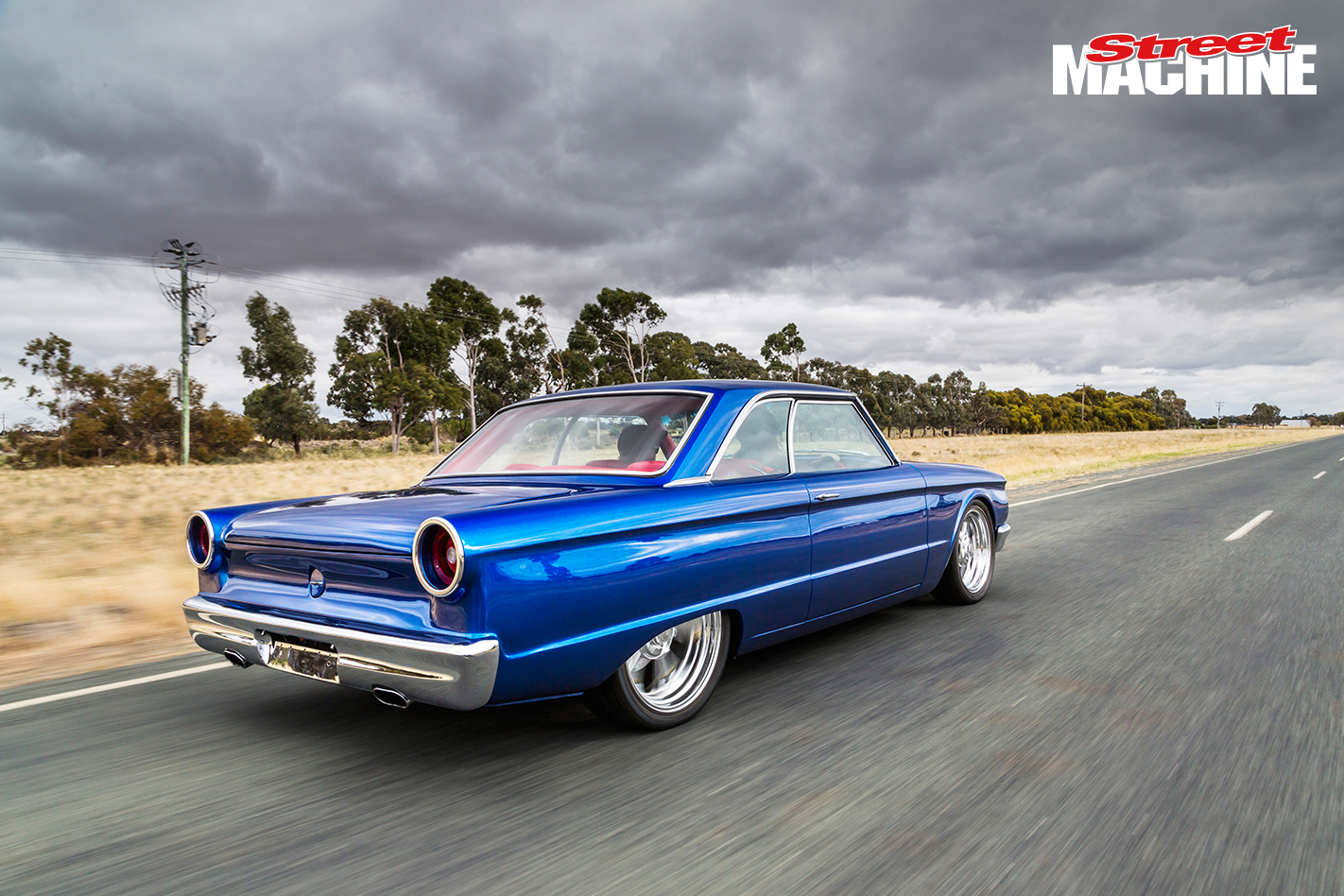 Surprisingly Dean hasn’t actually seen the finished car yet – a number of his friends have though, and report that it’s a knock-out. “I was supposed to see it at Summernats, but work got in the way,” Dean says. “I’m currently based near the Pilbara in WA and it’s way too dirty and muddy to bring it over here. It’ll stay with family in Sydney for the time being. I’ll head over soon and finally get to enjoy it after all this time.” 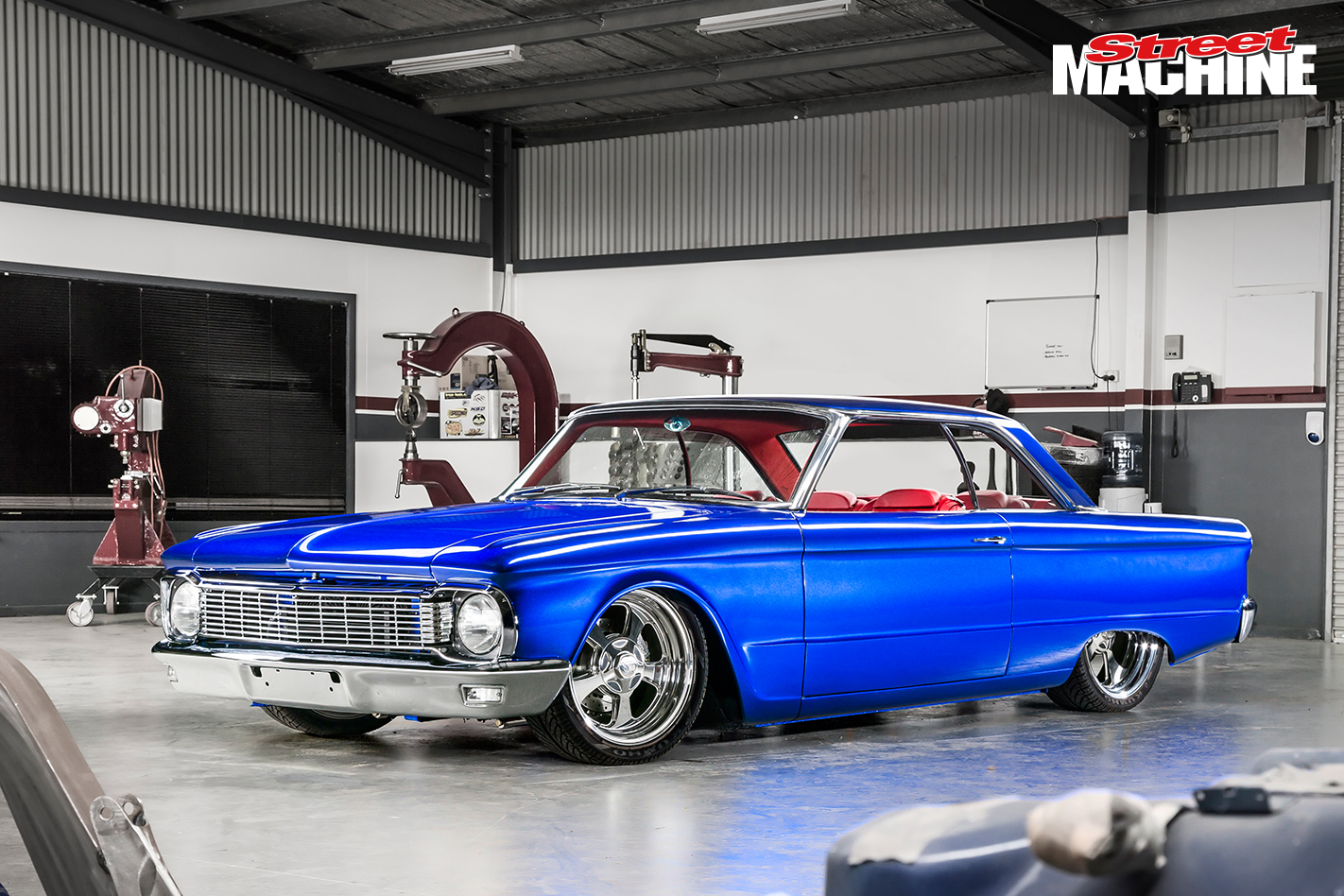 So did Mama Weldon end up getting the keys? “Ah, no,” Dean says. “However she still thinks it’s hers and is desperate to get the keys back! Once back in Sydney, I’ll definitely be taking her for a drive.”