NOW that we’ve just announced our latest project car, the ‘Fifty Shades of Blue’ LX Torana, it’s time to finally farewell our Project Swinger Dodge Dart. Here’s the full build story detailing every nut and bolt that went into our Green Machine, originally from the October ’15 issue of Street Machine.

THERE’S two things you can always count on with project cars: They’re always going to take longer, and cost more, than you thought. The idea for our Project Swinger Dodge Dart was to buy a car that was pretty close to what we wanted in terms of panel and paint, and then fill it full of mumbo to give away to some lucky reader. Wham bam, thank you ma’am.

It was a good plan, and using our very best crayons we scrawled down an approximate budget and decided it was plenty doable. But as that old military saying goes, no plan survives contact with the enemy – the enemy in this case being our Dart.

Last you probably heard of it, the Dart was getting a shiny new engine thanks to the great people at Precision International, Edelbrock and Powerhouse Engines (SM, Mar ’15). But with Telfo enjoying the benefits of inner-city living, and myself halfway through a house move, neither of us had the space to do an engine swap. So we handed the engine installation and front suspension rebuild to Mike McCrudden and his team at Glenlyon Motors in Brunswick. 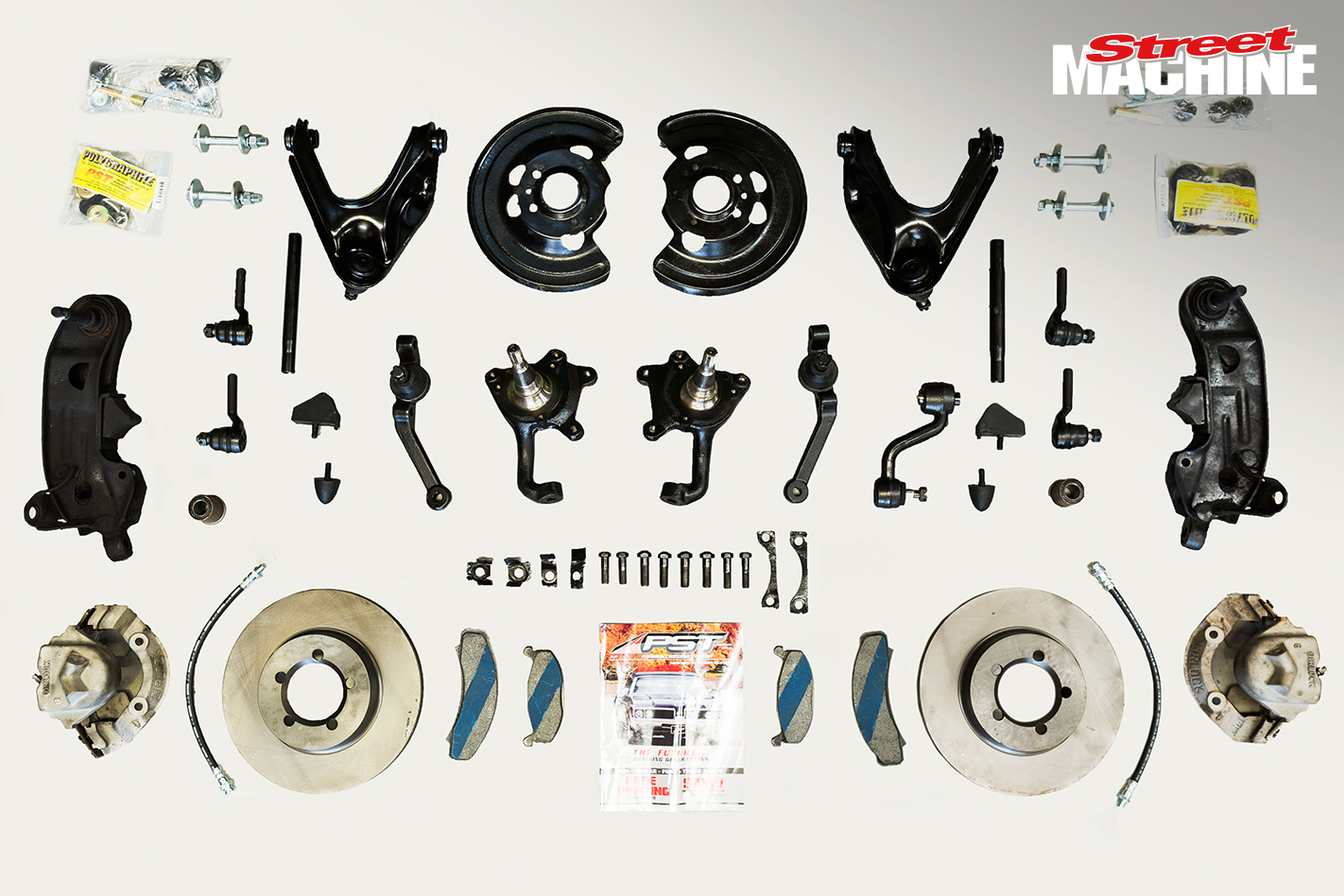 First job was to tear out the original drum-brake front end. In preparation for this, we ordered a complete front end kit from PST in the US, to give us all the ball joints, tie-rod ends and bushes we needed to get the job done. Mike combined these with some late-model VH-CM Valiant stubs, brand new disc rotors and rebuilt calipers. 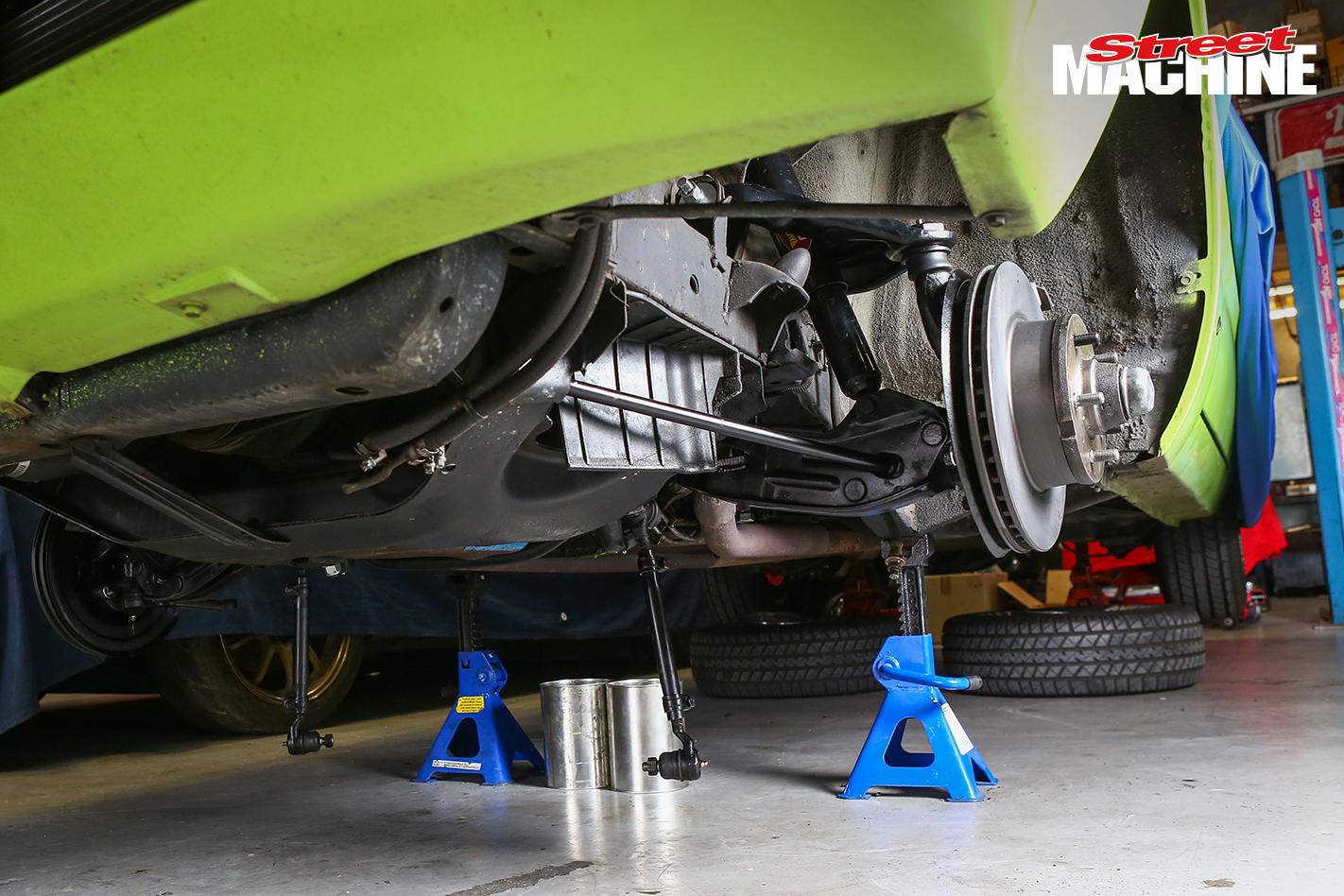 Next, Mike and his team had to deal with our leaky power steering box. It’s been the source of much frustration, and even though we tried some pour-in sealers, nothing could totally eliminate the leaks. But now the Dart starts, stops and steers better than new, with nary a clunk or rattle to be heard. 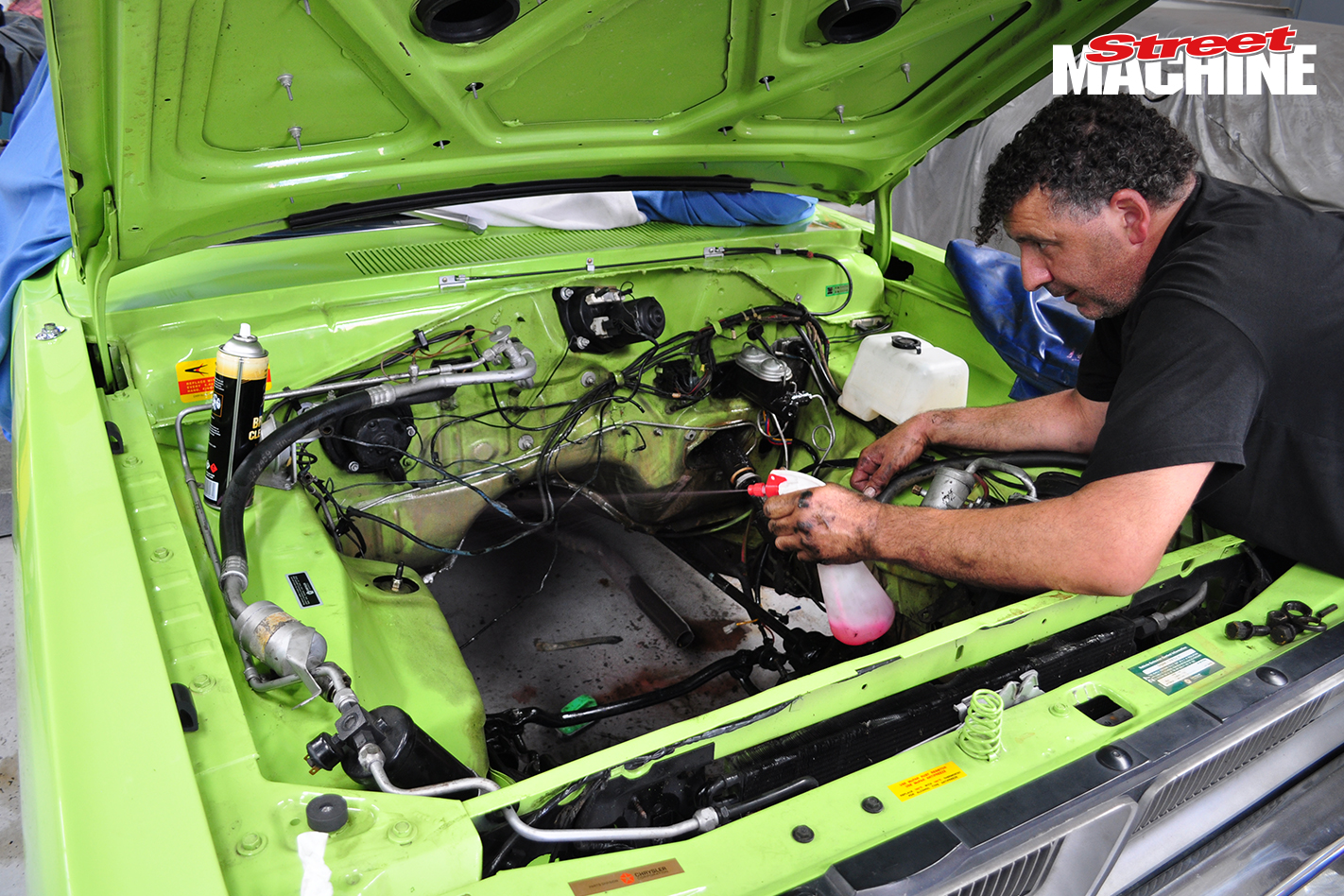 It was time for the engine to be installed, so we got our 408ci donk delivered from Powerhouse, and our freshly rebuilt 727 Torqueflite from Paul Rogers Racing Transmissions, and told Mike to call us when it was ready. Sounds simple enough, when you say it like that, but it’s rarely that easy in reality. 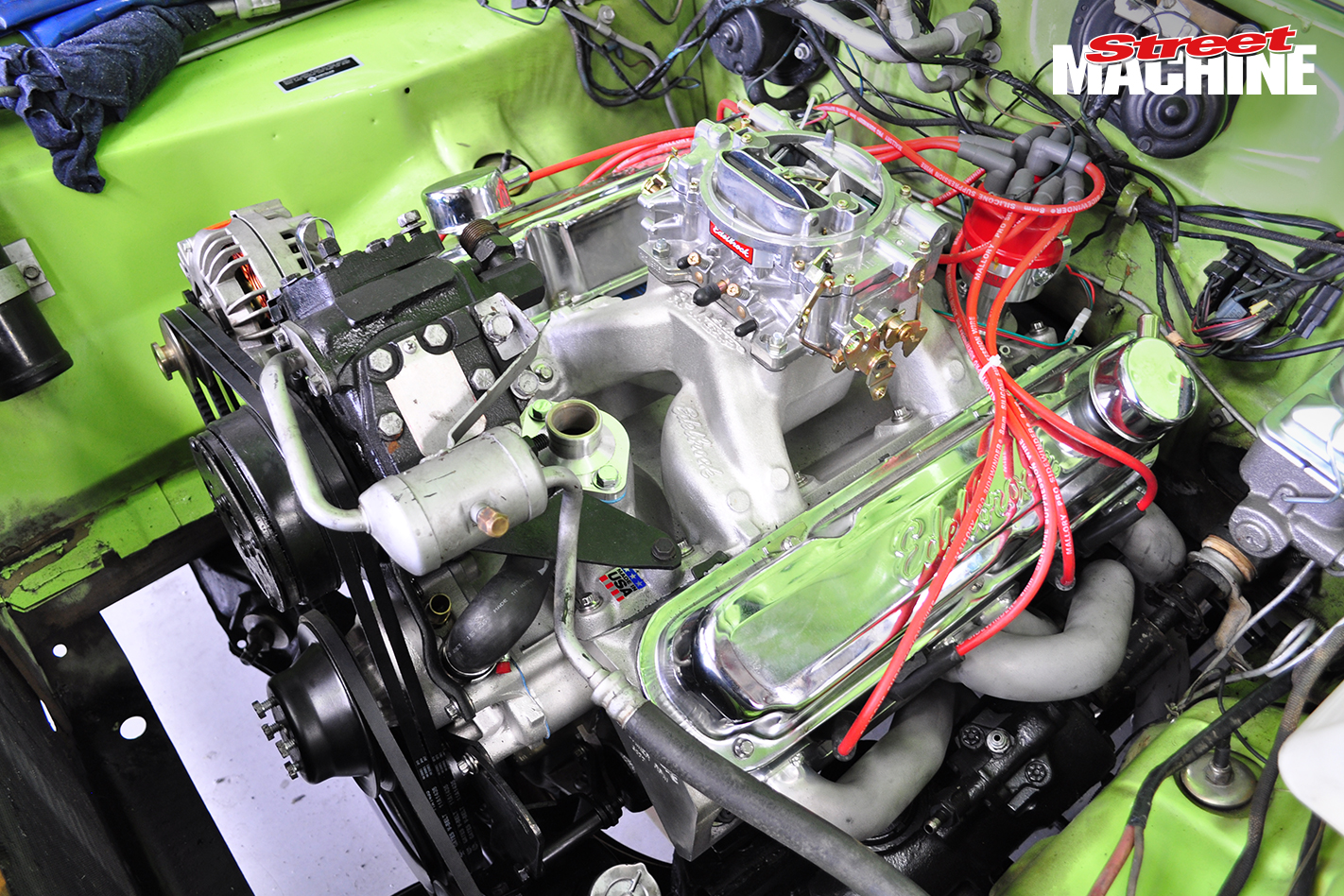 We’d already organised a 3500rpm Turbo Action converter through Summit Racing, a B&M SFI-spec flexplate with all the ARP hardware to match, plus a heavy-duty tailshaft from Powerhouse Engines. Yep, not only do they make tough engines, they also build tailshafts to suit! With the extra length of the 727, we needed something a bit shorter than the factory shaft, and certainly a lot stronger to match the torque of our stroker small-block. 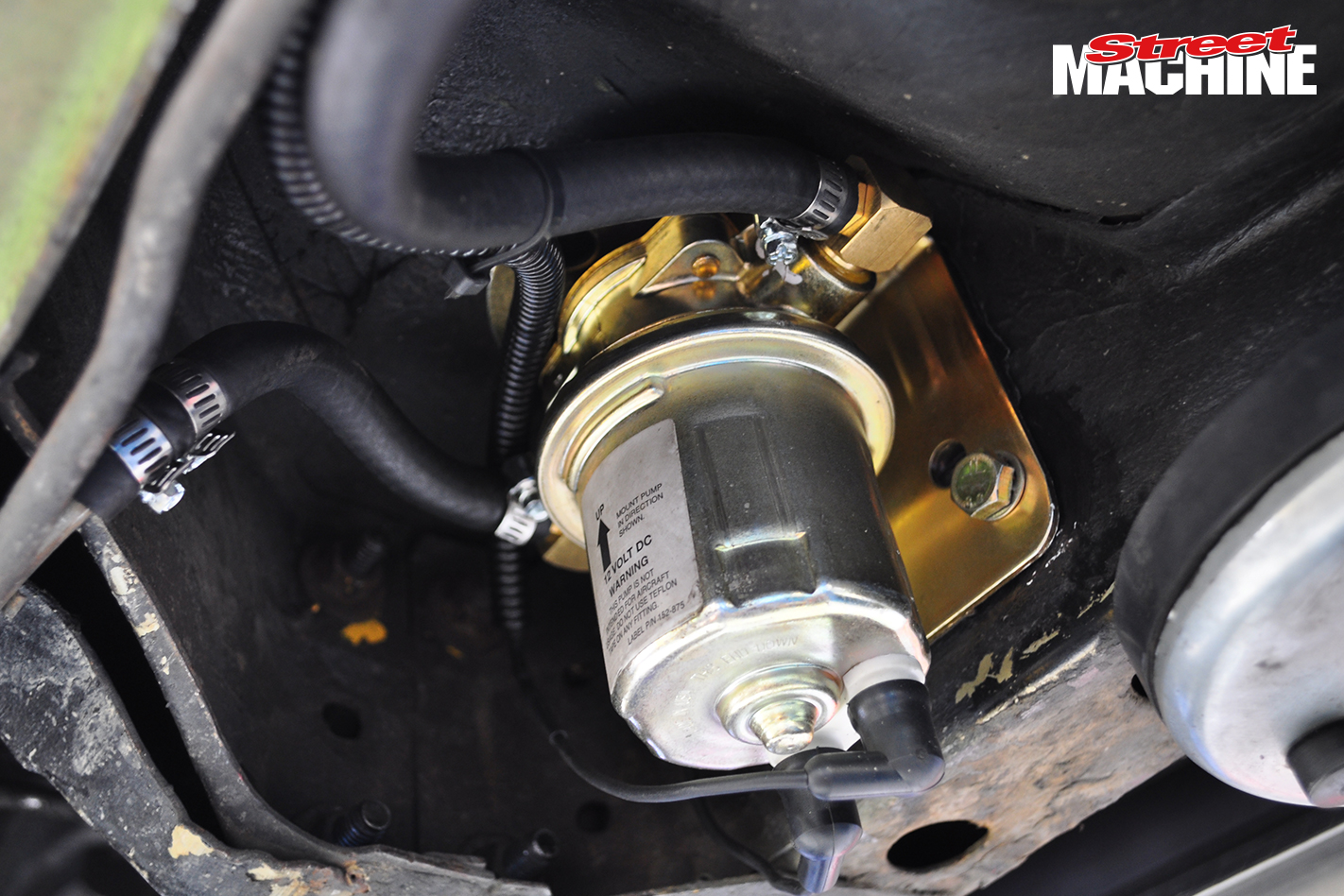 For the engine mounts, we gave Jason Waye at Tuff Mounts a call and he sent us a set of mounts to try. Being left-hand drive, the mounts were slightly different to their Aussie counterparts, so he sent out another set to use, and with a bit of mixing and matching, they worked a treat. 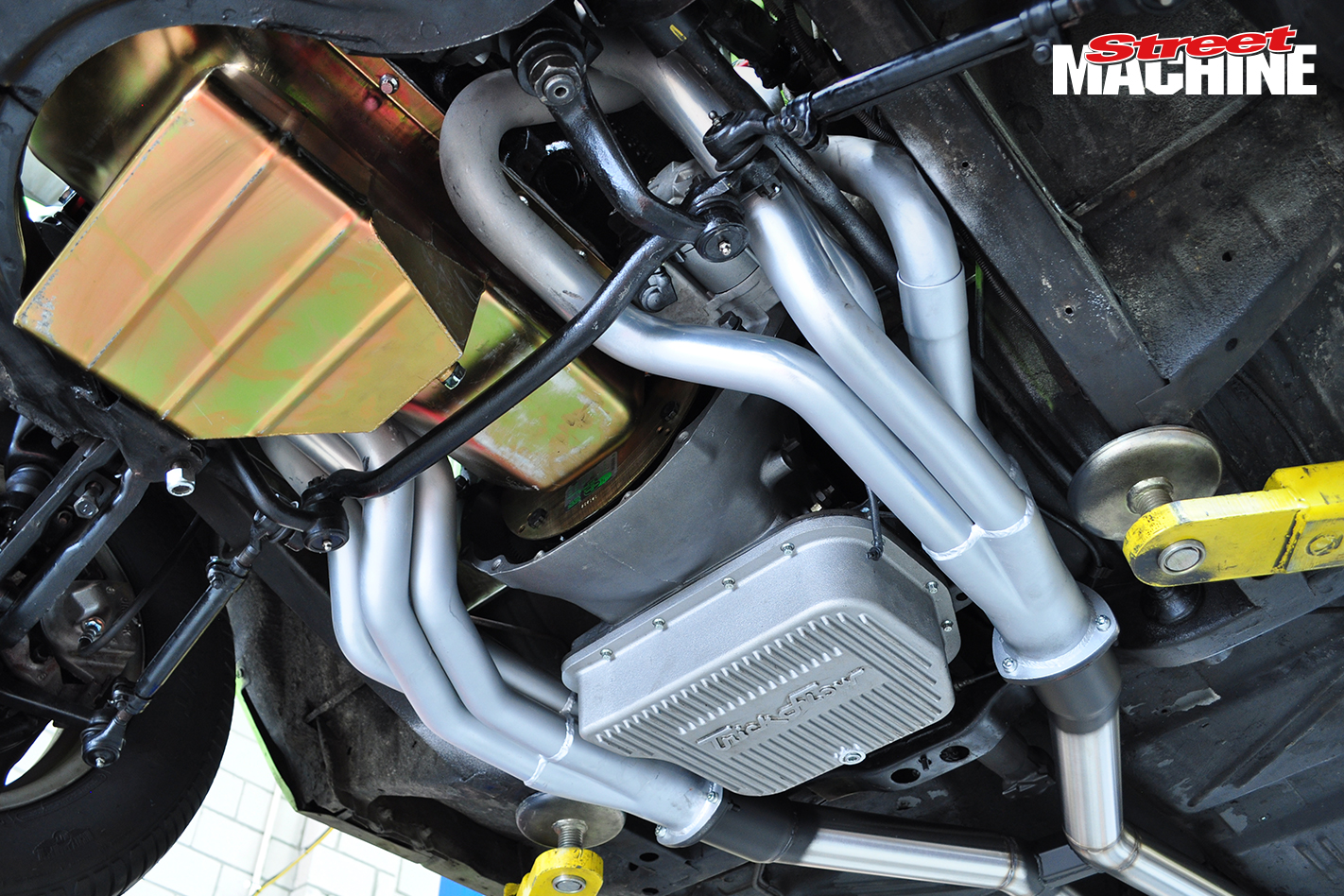 As you can see the pipes are a real pain around the steernig box and torsion bar area, but Andrew did a fantastic job making it all fit together

But the biggest headache was the uber-expensive TTI pipes we’d imported from the States. Being a left-hook car, we figured a set of US-made pipes should bolt straight in. Ha! Technically they did bolt in, but they hit almost everything, so we sent the beast off to Extracted Performance, where Andrew made them fit and built a shiny new stainless exhaust. 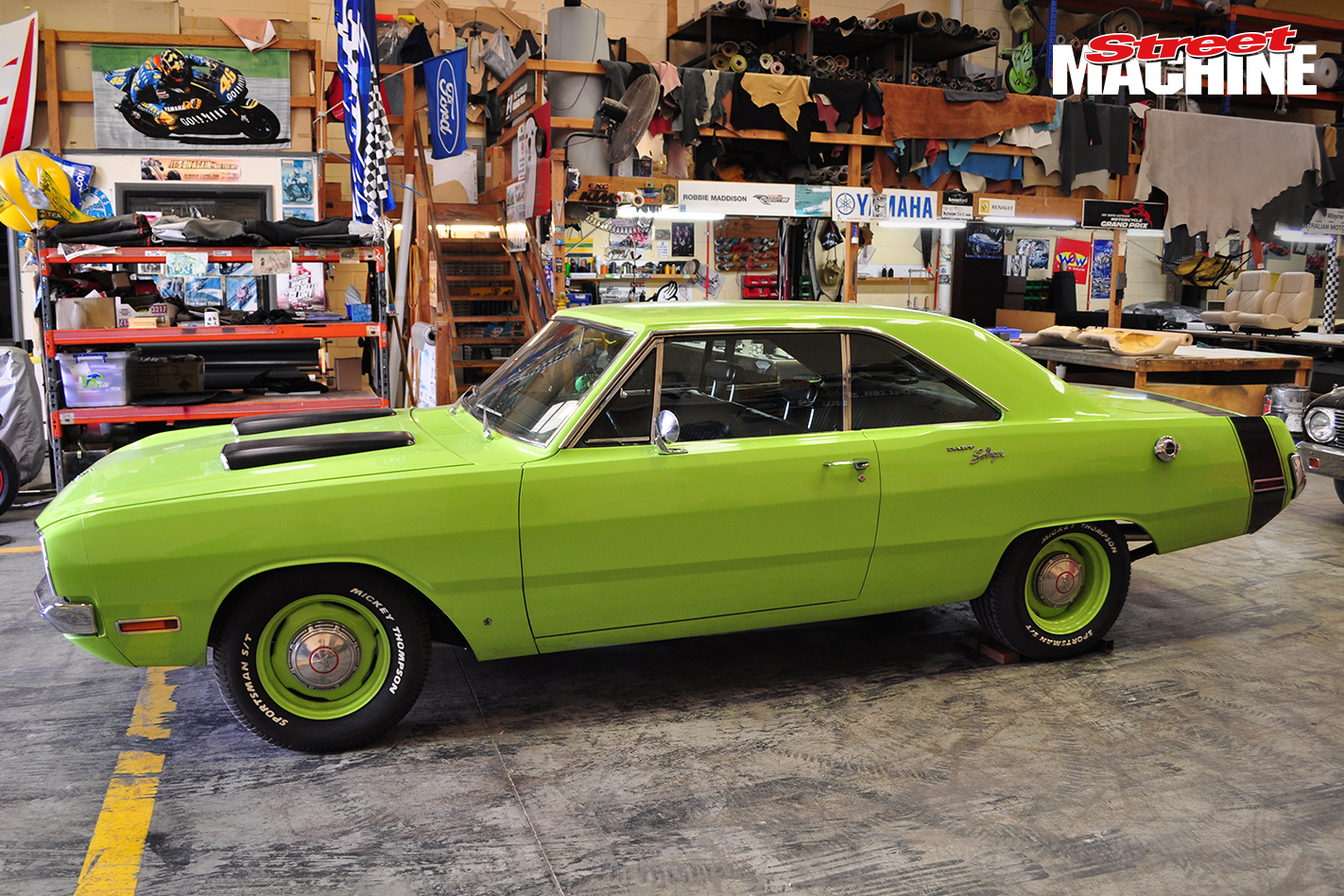 Of course we noticed another problem while it was on the hoist at Extracted – the rear tyres were scrubbing the outer guards. The problem was that we’d erred towards the outer guards when we gave Ajax Wheels the measurements for our custom steelies. Our thought process was that we could shave the lips if needed, but we couldn’t shave the springs. As it turns out, the springs had plenty of clearance, but the guards, er, not so much. 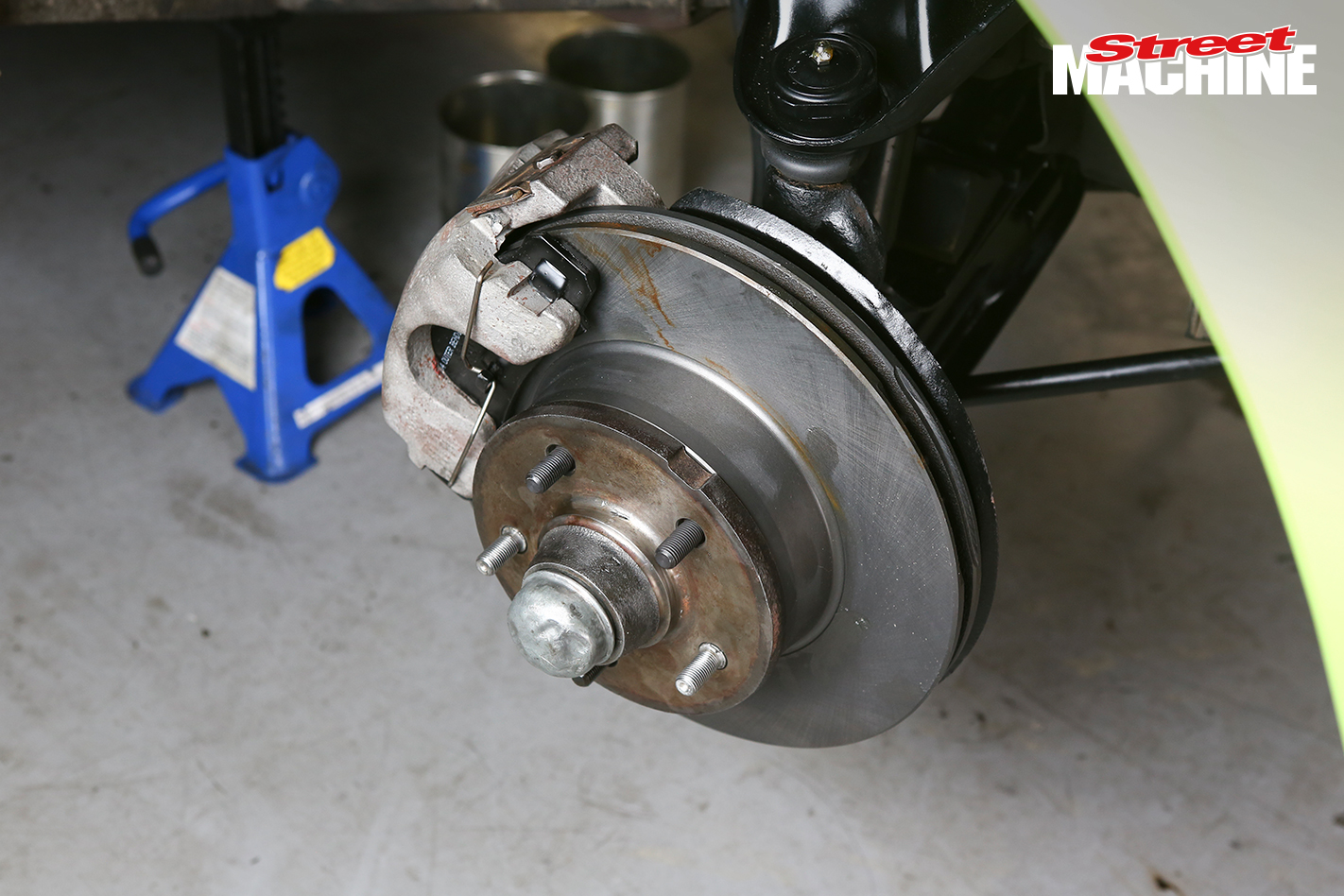 So we sent the Dart off to Betta Truck & Car Springs for a leaf-spring reset; Les and his boys turned the job around in less than a day and gave the green machine a couple of inches of extra height in the back end. Now it might seem crazy to lift it, but there was some method in the madness. The combination of deep sump, deep trans pan and four-into-one headers could cause us some headaches down the road, so rather than an in-the-weeds stance, we decided to go with a 70s muscle car look. With the white writing on the sidewalls and aggressive height, it looks like something that could have rumbled straight off a 70s drag strip, and everyone seems to agree that it’s a good look for our street bruiser. 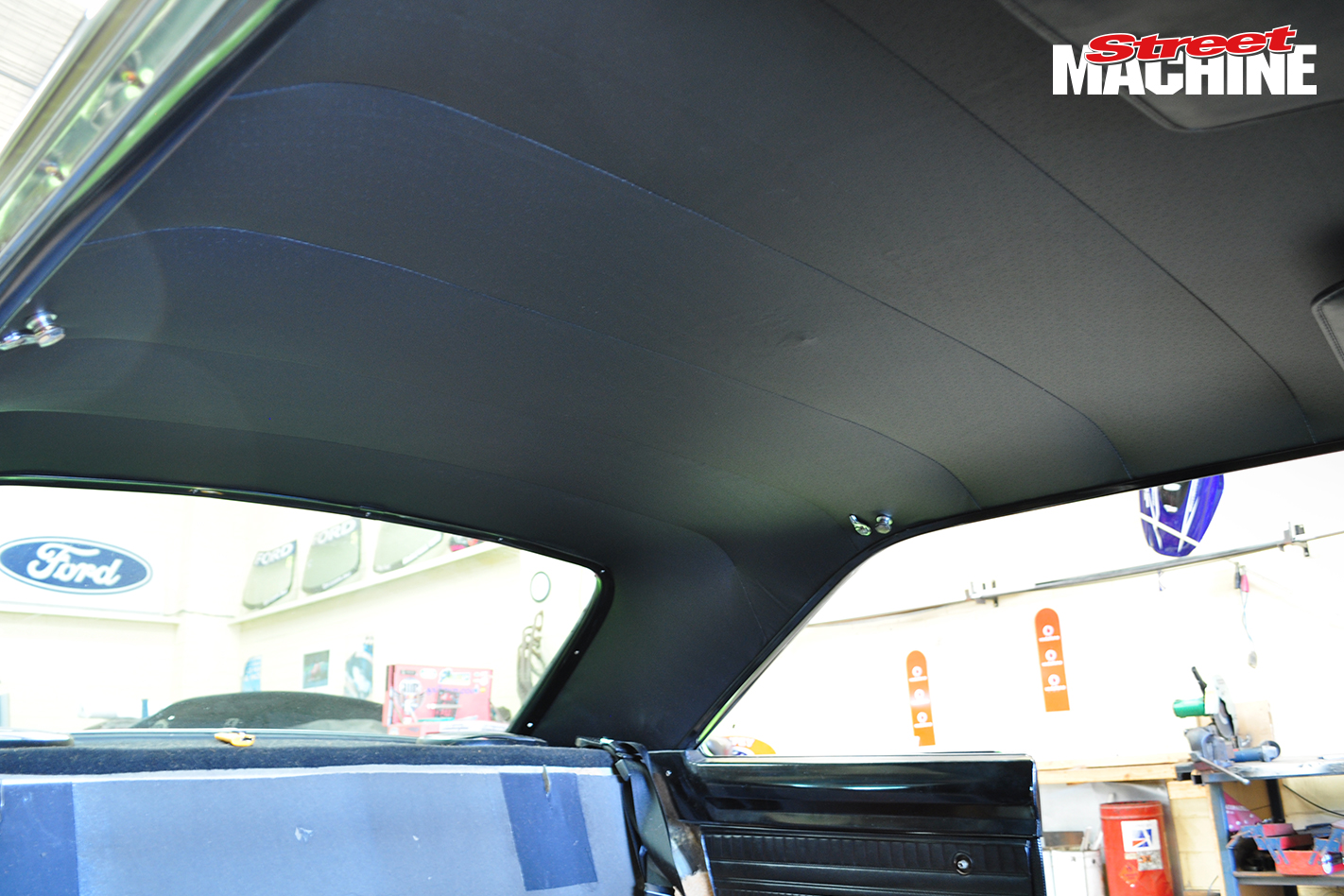 At this point Mike had a workshop full of cars, so we sent the Dart to Axion Motor Trimmers for some interior work. Our seats and door trims were already perfect, but the factory hoodlining was very sad, and the carpet was dark green. We put a call in to Roy Mouneimne at Roy’s Windscreens to get the front and back ’screens pulled to make the job easier, and we also got Tru-Fit to send us a box of their Resomat insulation. The boys at Axion used the Resomat to cover half the firewall and the floorpan before installing some new black carpet and the Year One headlining we’d supplied. Now the Dart was really starting to look the part. 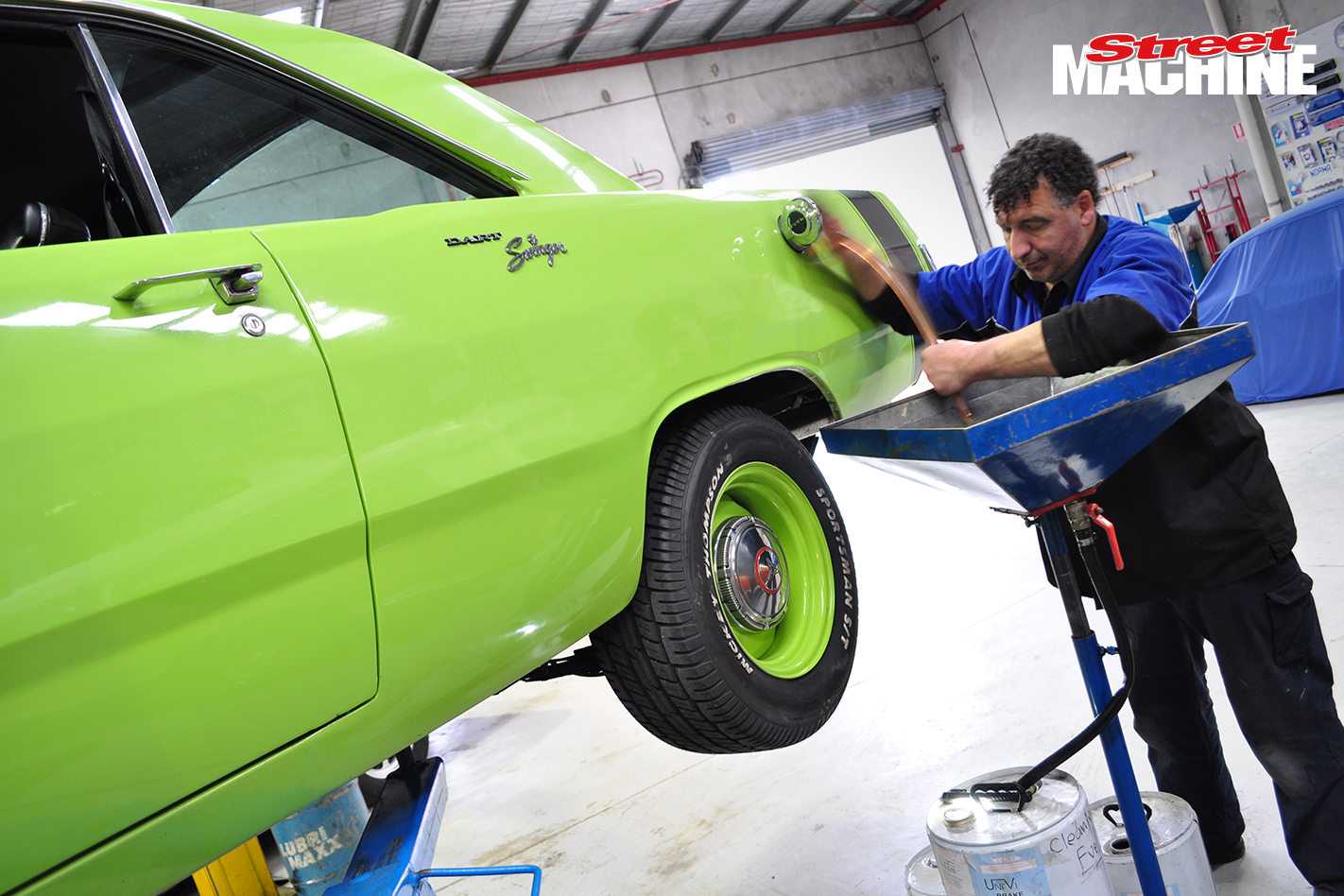 Back at Glenlyon Motors, Mike and Con hooked up the Mallory ignition, installed a trans cooler and an electric fuel pump before checking all the fluids and kicking it in the guts. Holy shit! We knew it wasn’t going to going to sound like Celine Dion, but when it exploded into life at a volume more like Metallica cranked up to 13, we nearly shat our pants. 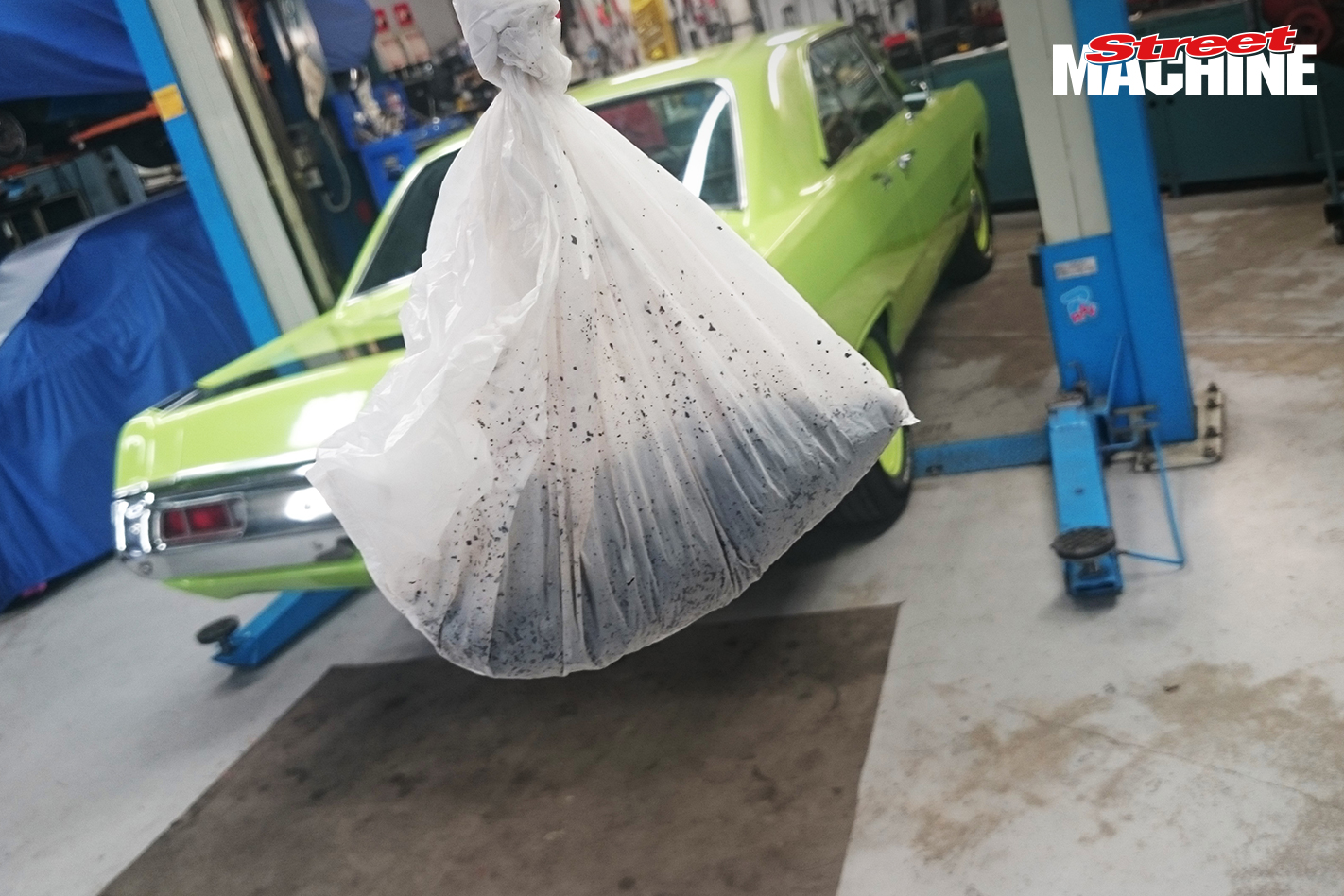 Of course we needed fuel. At the BP we pulled in and one of the service guys came running out. “Is this the car from Unique Cars and Street Machine? Can I take a photo?” We’re like: “Sure, go for it.” All of sudden we’re checking out their Mustang fastback and a customer’s DeLorean out the back – these are the kinds of things that happen when you drive a car like this. 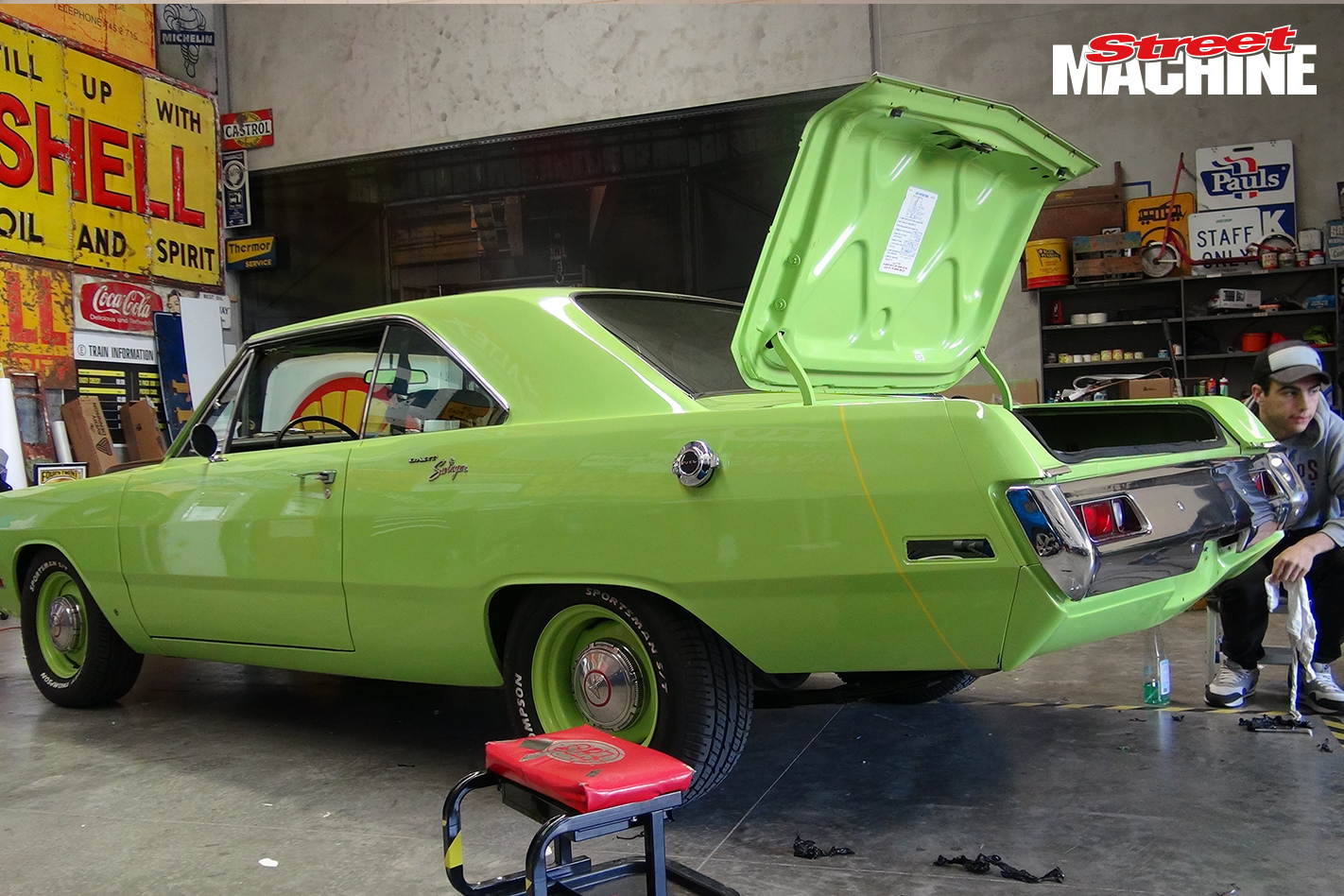 We were late handing the car off to the new owner due to all the hiccups, but we were happy to keep it around that little bit longer. One thing is for sure: This is probably the quickest and wildest-sounding car that Street Machine has ever given away. If it doesn’t run an 11 over the quarter, I’ll shave my beard. 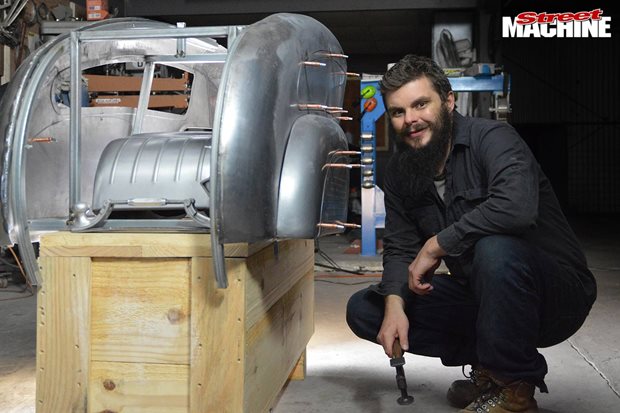