AS THE sun begins to set on almost seven decades of local production of Australia’s Own Car, this stunning example of the first ever Holden – the FX – is enough to bring a tear to your eye. Crafted in beautifully restrained resto-mod style, Mark Riek’s humpy ute retains all the period charm of a concours restored stocker, with a tastefully curated selection of modern mods combining to improve its performance out of sight.

19
It might look like a concours stocker, but underneath Mark has made plenty of mods to improve its performance well beyond the original

Of particular note is the powerplant. While it’s still a ridgy-didge old grey motor, a smattering of contemporary hardware both inside and out lifts power and throttle response to levels considered nigh on impossible back in 1953. More on that later.

Mark has built a fine selection of go-fast rides over the years, including an HR Prem, a VH SL/E with a stroked 253, and a V8 LH Torana. He turned to four-wheel drives for a while, but when he witnessed the splendour of a modified FJ hay-hauler cruising down the highway one day, the need for speed returned, and so began the search for what was originally going to be an FJ ute.

19
Mark got the car off eBay for $1000 as a rusted-out wreck, but Mark and his old man John turned it around completely

“When this FX presented itself for $1000 on eBay it was too good to pass up,” Mark says. “And besides, there was something special about owning one of the first Holden utes.”

The body was rough, but Mark had an ally in the build – his old man, John, who’s a dab hand with a hammer and dolly and has been an integral part of all Mark’s projects. That being said, once the ute was sandblasted, the extent of the rot was far greater than either of them had anticipated. “Rust was in the floors, inner and outer sills, bonnet, guards, rear quarters, tailgate and the tray; pretty much everywhere,” Mark says. “But I was already committed and with the modifications I was intending to make I was never going to cut up a good original ute, so we pushed on.”

19
Old man John bashed, welded and filled away at the FX's panels until they were in better-than-new shape

Mark had planned to have a more hands-on involvement with the body restoration, but a baby, a home renovation and launching a new business all put paid to that. Luckily John stepped up to the plate, mounting the humpy on a rotisserie and madly bashing, welding and filing away at its panels until they were in better-than-new shape. Then, on went the Glenn Green duco and all the factory badges and brightwork. “It was a huge job for Dad, made all that much bigger by the fact that I had dragged him out of retirement to help me,” Mark says. “Without his help, the ute would still be sitting under the house today.”

The exterior finish is factory-fresh, but it belies the extensive modifications that lurk beneath. The 60-year-old front end was binned and replaced with a fabricated unit from V6 Conversions, featuring AVO coil-over suspension and VL Commodore rack-and-pinion steering. An HG Holden collapsible column and column-shift mechanism were used, while VS Commodore disc brakes do the stopping. The firewall has been strengthened and partially flattened, and the chassis benefits from a Castlemaine Rod Shop strengthening kit. The tunnel has been enlarged to accommodate a Trimatic auto, and the front sub-frame has been opened up for fitment of a larger PWR radiator. Leaf springs remain out back, but these days they cradle a nine-inch diff, Truetrac-equipped with 3.25:1 gears and 31-spline axles.

The 16-inch Smoothie steel wheels were an integral part of the old-meets-new theme. Not only do they provide clearance for the disc brake upgrade, but they also allow wider, lower-profile 205/55/16 hoops for improved handling. But fitment was not a straightforward proposition – they had to have their offset modified and were further tweaked to accept factory hubcaps for the pseudo-factory look Mark was after. “If it wasn’t for Alan Richardson, the ute would have a set of mags on it instead of the stock look that was critical to the overall appearance I was chasing,” he said. “No one else I spoke with could get the original hubcaps onto these aftermarket rims.”

19
Under the bonnet is an original Holden grey six, now displacing around 150-cubes and boosted by a Garrett T25 turbo

As far as the motor was concerned, Mark considered many options. “It was always going to be running something with a bit of stick,” he explains. “At first I wanted to put a 308 in it, then I was looking at an RB30 turbo, a 202 with a supercharger, and a 202 with a ProCharger, but the power-to-weight regulations in the National Code of Practice were really limiting my options. It was starting to look like a 202 with triple Webers would be the go; I even bought a 202 long motor and began a rough fitting of it. It was at that stage that my dad introduced me to Geoff Scott from Geoff’s Auto Studio.”

19
The completely built motor is good for 141rwhp, but has the potential to go to around 200rwhp

As it happened, Geoff had only recently completed a mental grey motor that had been destined to go in a circuit race car. “He said if we whacked a turbo on it, it could be good for around 200rwhp,” said Mark. “I had no idea that these old grey motors were good for that kind of power, and the more I thought about it the more I loved the idea of keeping the original motor in the FX.”

19
The cockpit was trimmed by Jeff Sleep Motor Trimming, and like the exterior, it’s largely original with the exception of gauges, a HK GTS steering wheel and HG column

And with that, Mark purchased the engine; a wonderful Frankenstein-like creation that uses a heavily modified crankshaft, Mitsubishi 4G64 conrods and 81mm Mazda-spec ACL pistons to arrive at a 2458cc displacement, or a whisker under 150ci in the old money. The head is ported and the cam is a Waggott item of .500in lift and 232@50 duration, but it’s the induction set-up that really sets tongues wagging. The old grey lump has been dragged kicking and screaming into the 21st century by way of a Garrett T25 turbocharger, PWR water-to-air intercooler and an electronic fuel injection system with a MoTeC M84 ECU – pretty damned cool, eh?

The 141rwhp the combo has produced to date might sound modest by some standards, but when you consider that the 132.5ci grey originally fitted to the FX was good for a mere 60hp (probably around 45rwhp), it represents a massive 300 per cent increase! That power was also produced (along with a commendable 471lb-ft torque figure) on a 40˚C day on a lowly 9psi of boost, so it’s reasonable to expect that a number closer to that 200rwhp target will come with further development. 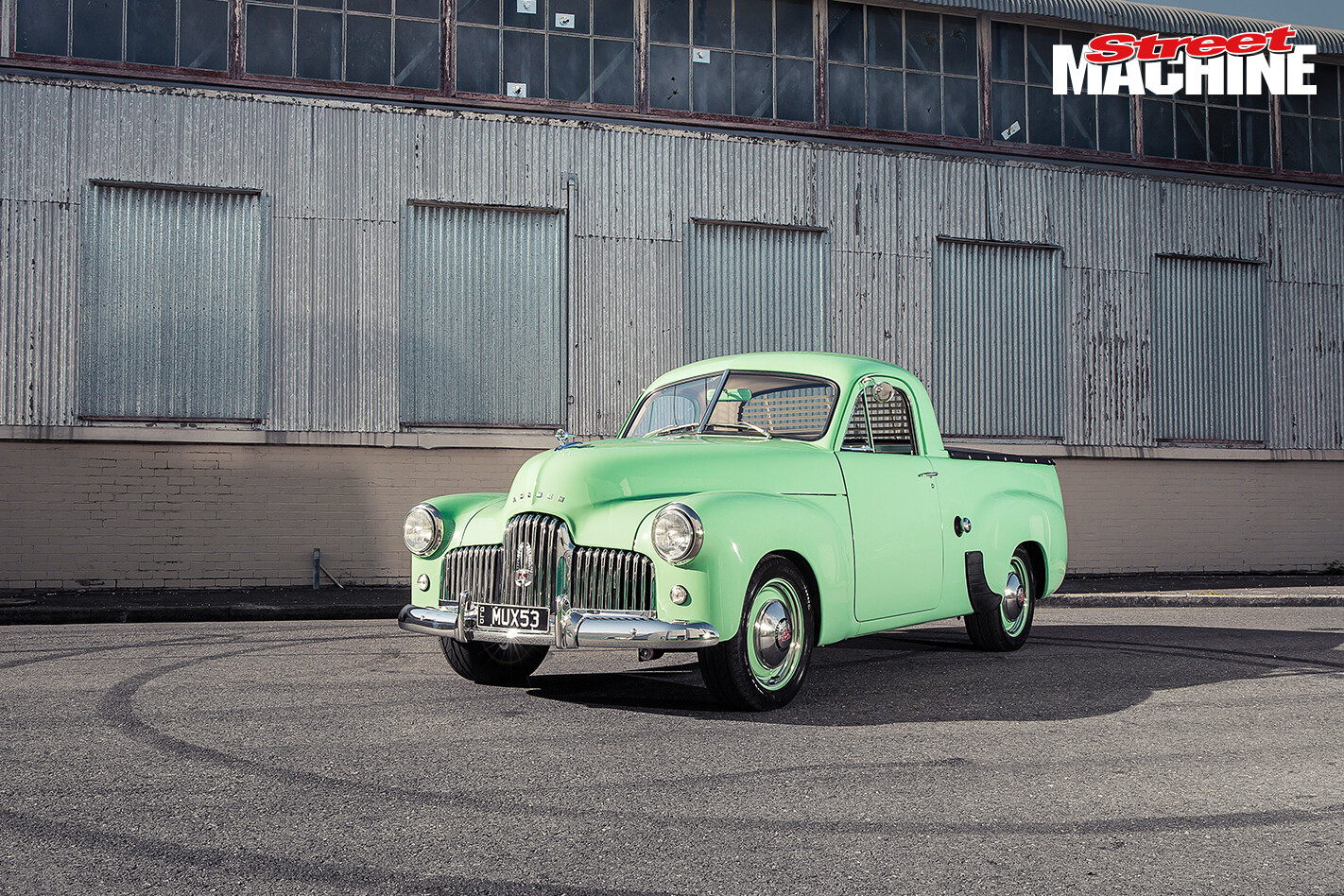 So far the car has ran a best of 15.6-seconds down the quarter and 10.04 at the eighth. “I reckon I can get in the high 14's without too much trouble by playing with diff gears and stall converters but for now I'm pretty happy with that,” Mark says.

One he cracks into the 14-second range, Mark will stop chasing numbers with the FX as he’s keen to get working on the next project, a ‘38 Olds rat rod. For now though, Mark is excited about cruising his creation powered by an engine that’s incredibly unique and brilliantly befitting of the resto-mod theme. “At 100km/h it’s just so smooth, which is great because I want to travel to a few shows and can’t wait to start driving it!”

UPDATE: Since we first published this story, Mark has developed the FX to the point where it now runs 12.40s over the quarter mile. Stunning stuff for the ancient grey motor in a full-weight car. He's also completed Drag Challenge Weekend and spanked the car at events all over South East Queensland. Props!