IF YOU missed seeing Mark Hayes’s awesome LC763 Torana at Street Machine Summernats 28 then get your butts down to the Hotrod and Custom Auto Expo at Rosehill Racecourse this weekend.

Don’t know who Mark Hayes is?

Mark Hayes is a bona fide Aussie street machining legend. For more than two decades his true street-legal big-block LC Torana ‘LC4540’ has been one of the fastest street cars in Australia, running in the 7s.

But the LC Torrie Mark unveiled at Summernats 28 is a totally different beast, with a focus on going deep into the six-second bracket.

“The need for wanting to go faster created this car. This car has come from 20 years of racing my other car, and what that car could and couldn’t do,” the Pro Street legend says. “There are certain limitations when you build a street-registered race car, so I built a car that is drag-specific but looks a bit like a street car. I wanted a car that was of Elite standards in appearance, but serviceable and would be able to run as fast as my budget and knowledge could take me.” 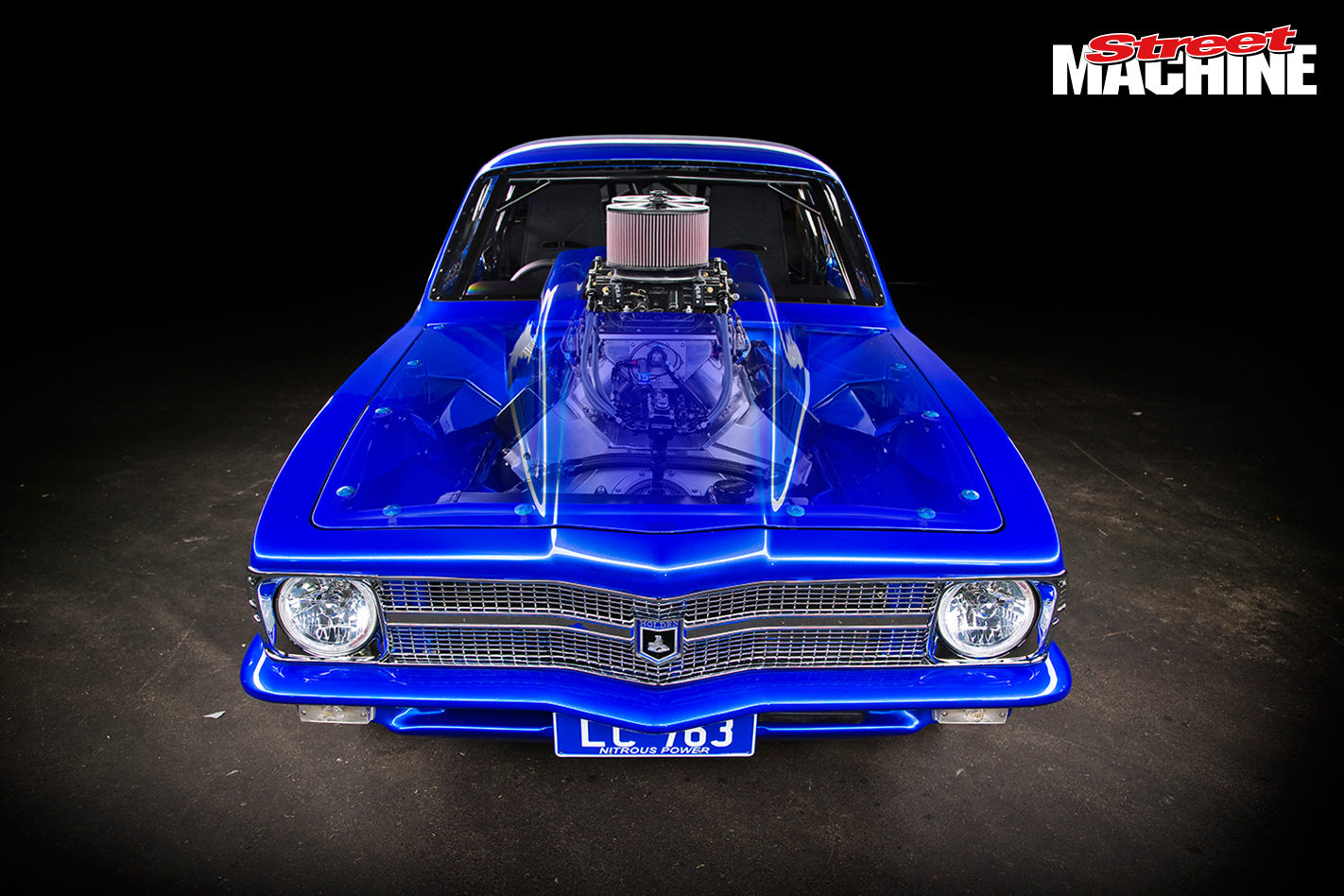 LC763 nails the Elite brief with stunning success. The car is dripping in high quality details, from the glass-like PPG Vibrance Crystallance custom blue paint (an off-the-shelf colour called Crystal Bay in the new Charlie Hutton range) to the rounded corner of the reverse cowl scoop as it joins the bonnet.

Naturally, this quality result comes as a by-product of many hours of hard work – Mark built the car himself in his shed, with the LC only leaving to have the rollcage installed and the paint applied.

“The car went to Joe Gauci at Profab Motorsport Fabrications in Wollongong for the rollcage, which was done in only two weeks. Apart from that, and the paint, the car was done entirely in-house. I also had a bit of help with some aluminium welding, and I borrowed a friend’s machine to bend up my wing.”

The build began with a sad but solid “grandma-spec” LC Mark found next to a house in Pennant Hills, eight years ago. “I bought this car because it was a good car, and then stored it at a friend’s garage until March 2009 when I started the build,” Mark says. “It had a little bit of rust in it but it was in reasonable condition.”

Amazingly, while you might expect the shell to be made of exotic lightweight material it’s actually all steel, except for the bonnet, shortened boot-lid and bumpers. Even the custom smoothed inner-guards and front chassis rails are all metal. 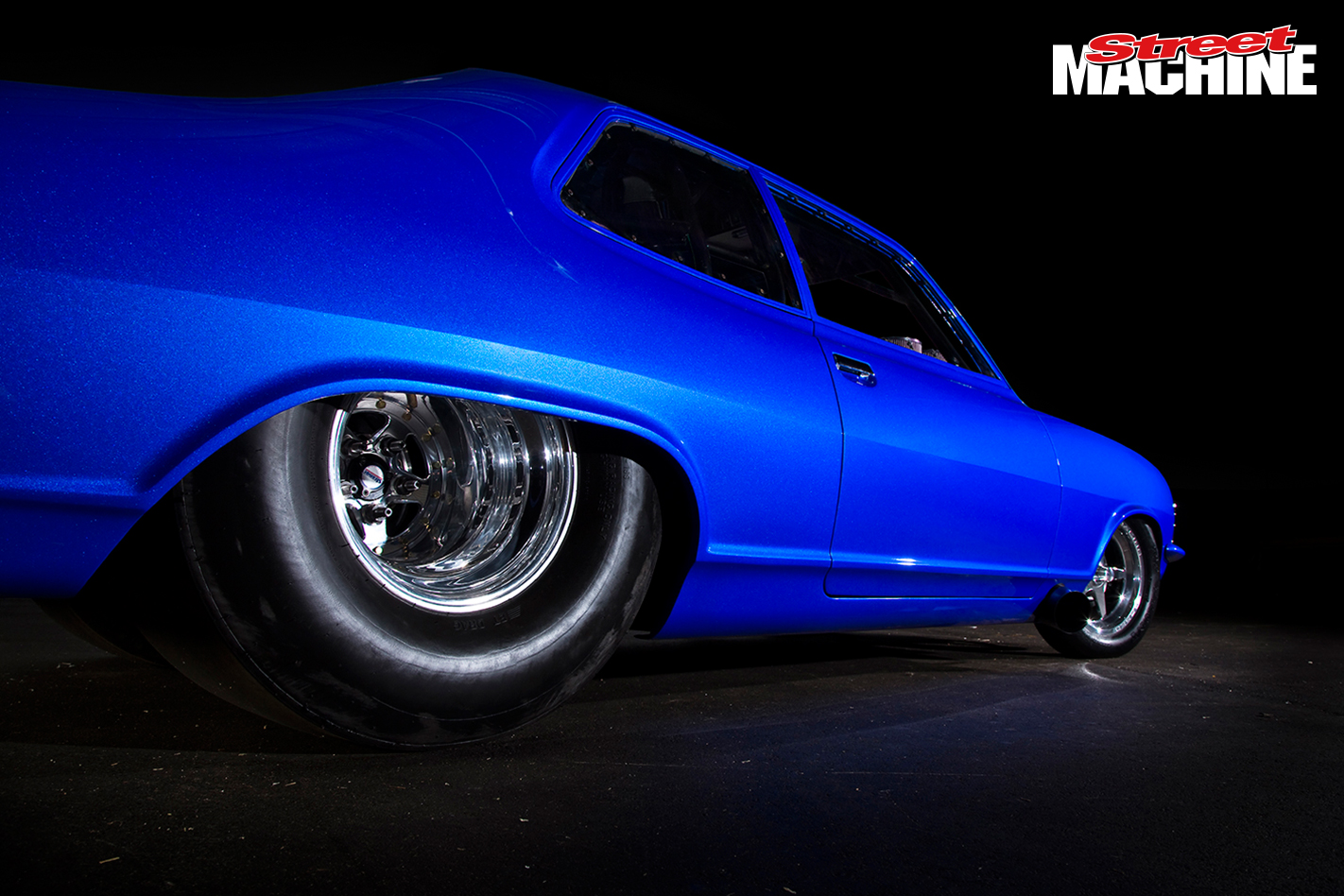 All this work required serious fabrication. “The car was put on a jig, so the sills and rear quarters on both sides were welded to a chassis jig, and everything from the windscreen to the back bumper was cut out of the car,” Mark explains. “Rob Godfrey came to my house every Tuesday night for 18 months and we got it straight; we lengthened the rear quarters, we hung the doors, we filled the front scuttle where the wipers used to be and we made fill panels and patches. I also cut the boot in half and welded it in, fitted the door locks and tucked the bumpers.

“We spent a lot of time on it and that’s why it is as straight as it is, and looks so good. We used old school oxy welding techniques, and slapping and filing to get the car where we wanted it to be.”

Mark says the reason behind using the oxy comes down to heat management and the need to spend time finishing the panel. “MIG welding is good, and a lot of people use it to get great results, but the amount of work we needed to do on those rear quarters to lengthen them nine inches and still flow meant we needed to work those panels. By oxy welding them it means they’re still workable as there is no hardness from the MIG. The results speak for themselves; I’m blown away.

“The colour has brought the car out and shown every bit of work we put in behind the scenes. It is a new PPG product which actually has crushed glass in it, giving a uniform metallic-style effect.” 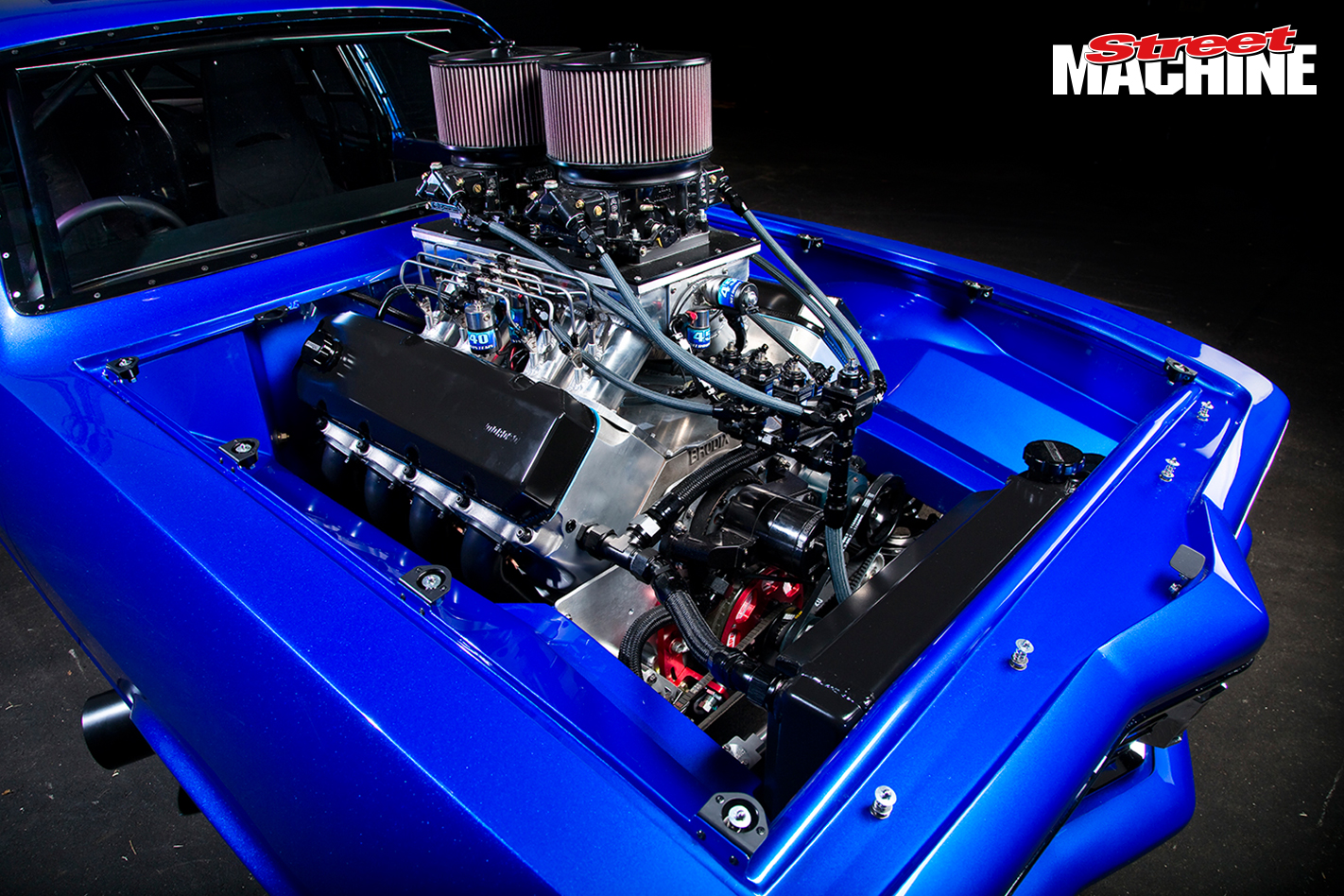 The rear guards aren’t the typical sort found on a tubbed-to-the-max Torrie. Mark and Rob were careful to maintain the lines and flow of the original guard shape by welding in carefully sectioned pieces of fill plate to the floor and arch behind the tubs, maintaining the original curve of the panel and providing maximum clearance for the gigantic Mickey Thompson slicks. They then brought the beaver panel in, extending it and wrapping it downwards into the boot floor, under two gigantic nitrous bottles.

However, Mark says this wasn’t the hardest job on the car. “Trying to incorporate late-model aerodynamic ideas onto an early model car can be tricky, without it looking tacky or gaudy,” he sighs. “Trying to get it to blend in is another thing. I had to get the wing to flow with the body lines and also have adjustable wicker bill and spill plates. Those folds in the spill plate are to match the body line on the car.

That aero work is definitely going to get tested to the limit thanks to 12.5 litres of Brodix big-block rising menacingly out of the engine bay. The 763-cube motor makes 2275hp in total; 1525hp naturally aspirated with 750hp up its sleeve thanks to a three-stage nitrous system. 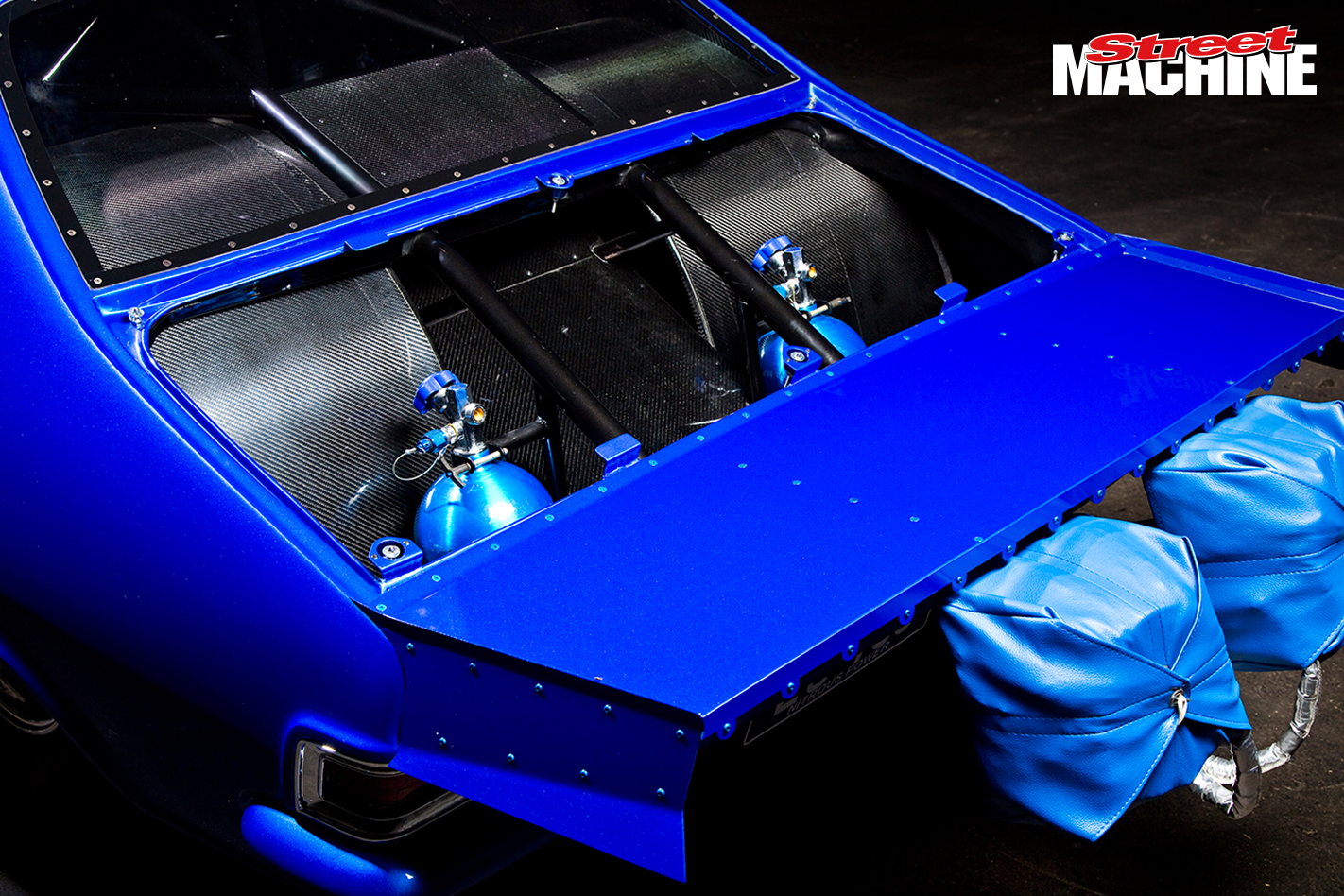 Such a set-up shouldn’t surprise anyone familiar with Mark’s other LC, given he has run a nitrous big-block for decades. “I love nitrous engines. I’m not against turbo or supercharged engines, they’re great, but I like nitrous motors. What I know about nitrous engines is that you can only make a certain amount of power per cube. Having the ability to make over 2000hp with a five-inch bore space was a primary goal and to do that I simply needed a bigger engine, so I built the biggest engine I could afford to at 763 cubic-inches.

“The turbo and supercharged cars have power to burn, nitrous cars don’t. We have to get our power on early and down low, so having a big engine helps. I shopped around to find the best value five-inch bore space combo. I bought the manifold, block, crank, heads and rods from the USA as a kit. It still needed to be machined here in Australia to my specs, and I used my own camshaft and rocker set-up that I designed.

“The five-inch bore is important as the external dimensions of this engine are the same as a regular 454, but there is a lot more internal capacity. And I can put my 632 straight into this car to make it run in different classes.” 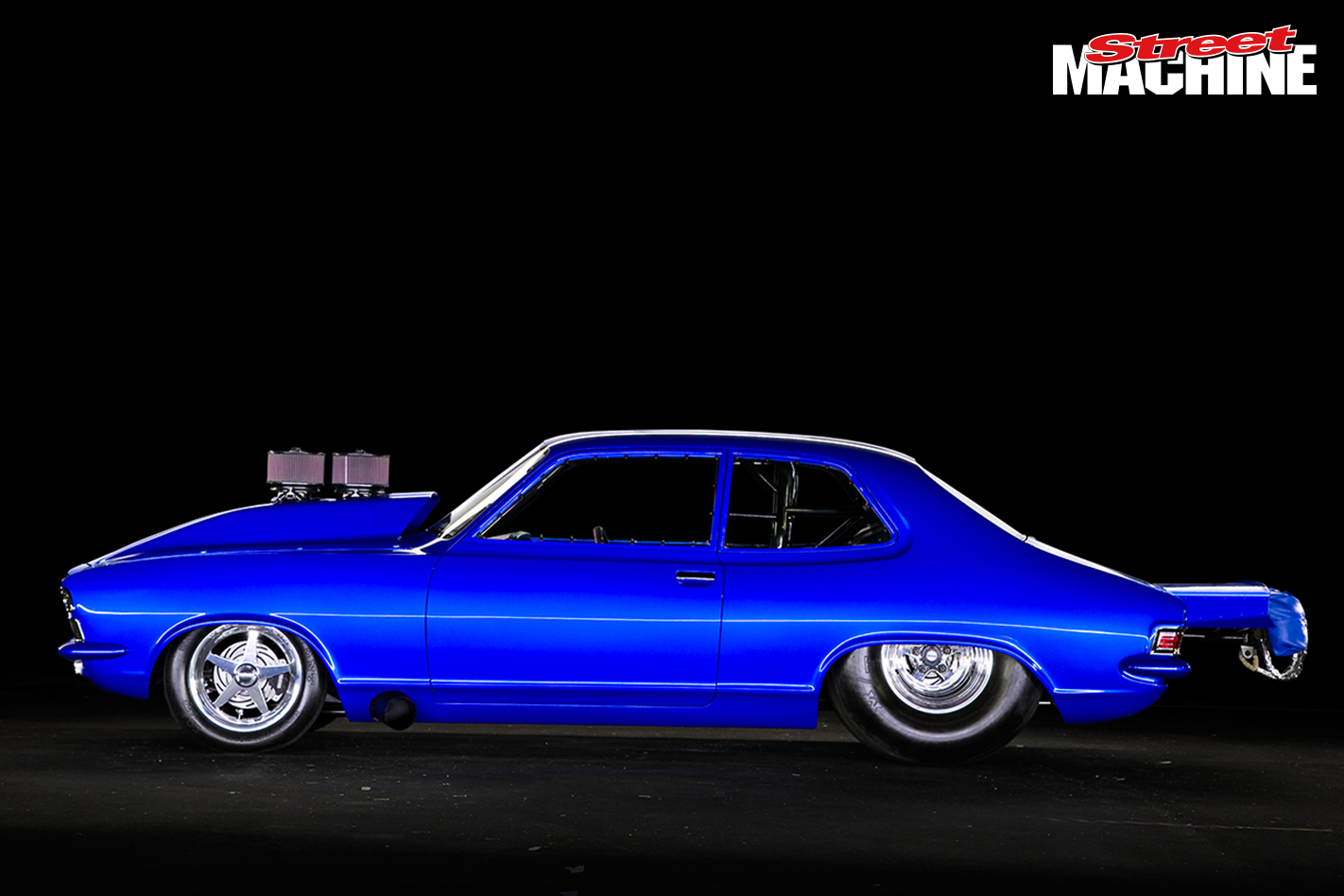 “Strength is a factor for going the two-speed Turbo 400. In this type of car a Powerglide can be every bit as strong, but a two-speed Turbo 400 offers a much wider choice of ratios. LC763 has a fairly long first gear so you can get a lot of power in early without knocking the tyres off.”

The drivetrain is rounded out with a 3.5-inch Moly tailshaft and 9.5-inch full-floating diff by Strange, while the legendary US company also supplied Mark the disc brakes and dual-adjustable rear coil-overs and front struts.

Inside the car blends familiar touches of street and track, just how Mark likes it. “I wanted the car to have the character of a Torana, so while it’s an LC I like LJ dashboards better; it’s a flatter less bumpy style,” he says, before explaining the work involved to neaten the rest of the cabin. “I’ve moved the dashboard back 220mm and incorporated that into the car with a carbon panel and steel sides that fit around the rollcage. 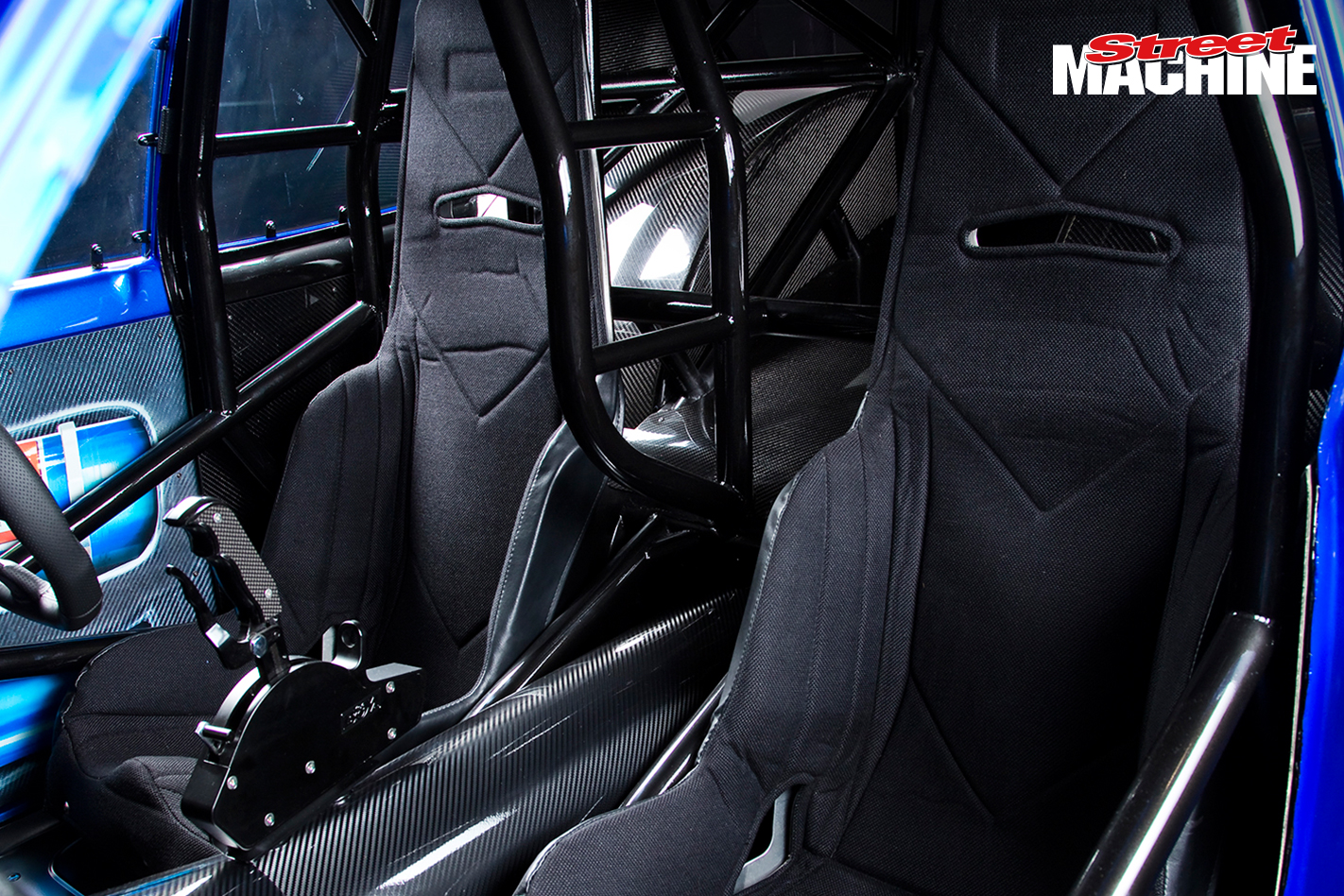 “All my electrical components are behind the dash, including my MSD Powergrid, my battery and my RacePak. You won’t see any wiring or switch boxes in the car, no relays; everything is behind the dash, which can be removed with just six bolts, leaving the whole wiring harness serviceable.”

As with the rest of the car, Mark dove in and did almost all the hard work. “The carbon tubs are off-the-shelf items from Jerry Bickel Race Cars in the USA – bought here in Oz from their agent – and are trimmed to fit, but the rest of the carbon work was done by me. It’s just like plywood; you buy a sheet and cut it to fit using rivets or Nutserts to secure it. It’s fairly flexible so it can fit around the legs of the rollcage.”

While it sounds like everything came together smoothly, that isn’t true. Mark struggled with the same problems many street machiners do; namely time.

“A five-year build came down to the last seven weeks. I should have had this motor built a long time ago but with work, a young son and trying to build a car, I left it to the last minute. 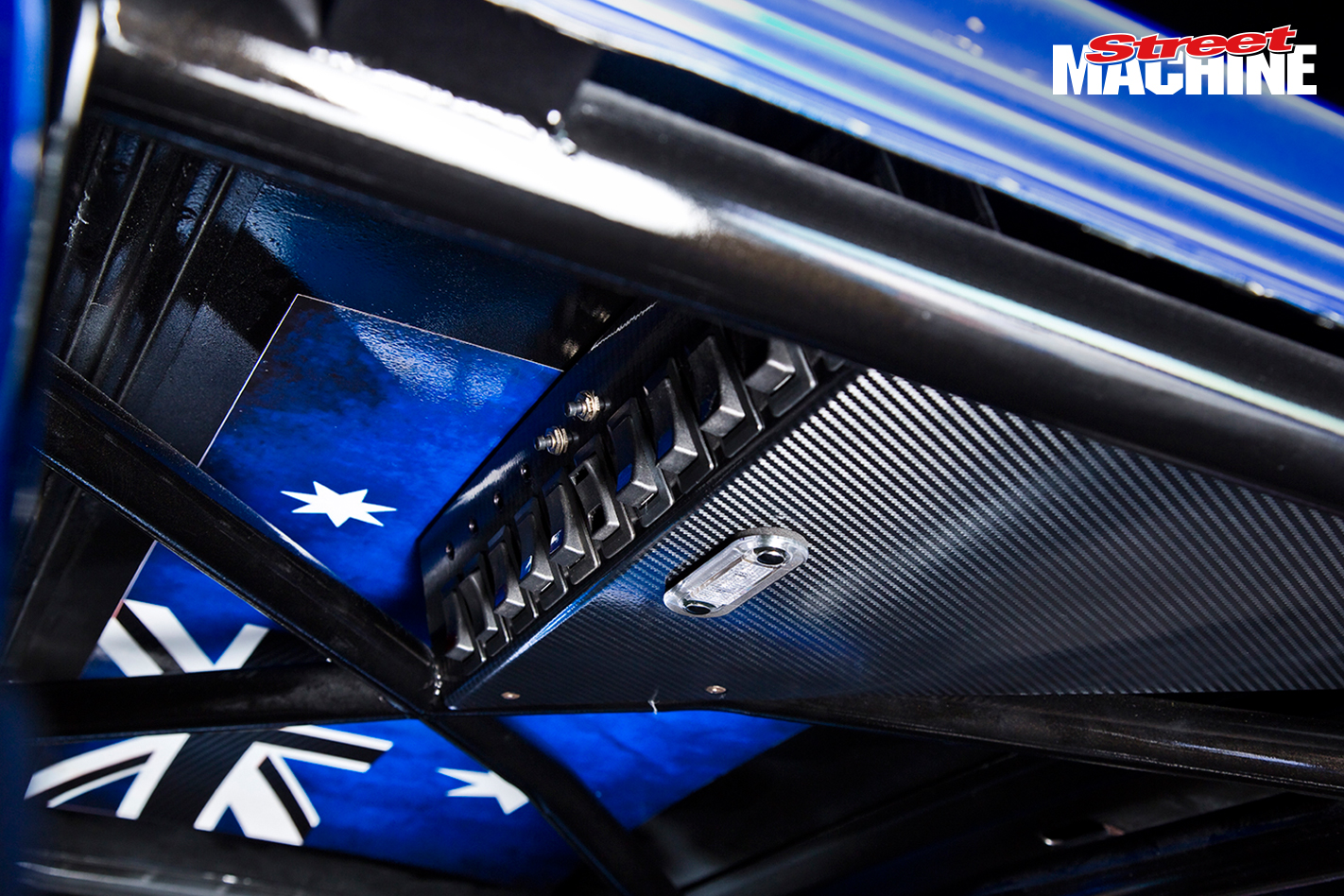 “The goal was to build the car in three years, but my wife Dina and I decided to start a family three years ago. I wasn’t in a hurry to get the build done as drag racing and street machining weren’t going anywhere, so I just built the car and when it got close I set myself a deadline.

“I’ve had the car back from paint for seven weeks and I don’t think I’ve been to bed before 1am since. I’ve had some help from good friends and I wouldn’t have gotten here without them. I definitely want to be at the APSA meeting in May. I love Pro Street, Outlaw 10.5 and radial class racing, so the main aim for the car is heads-up racing. I’m not really a bracket racer like Super Sedan.

“The plan is to run a 6.5-second pass in Outlaw 10.5, and 6.9 with my trusty 632 from LC4540, but I’m not out to set the world on fire on the first pass. It’ll probably take me three to four meets to get comfortable in the car because I haven’t raced since February 2009, when I won the Streetcar Superstars.

“It’ll be a whole new learning curve, with the nervous jitters you get when you get back into a new car like this. I’m looking forward to it and I’m keen to get back in by April or May this year.” 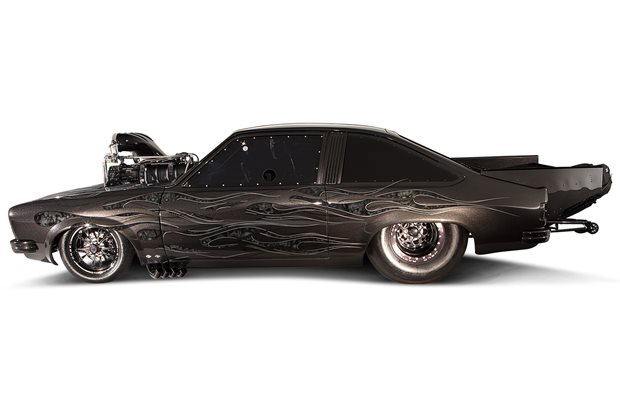 Sydney’s Michelle Davies is now the fastest female 10.5 Outlaw driver on the planet 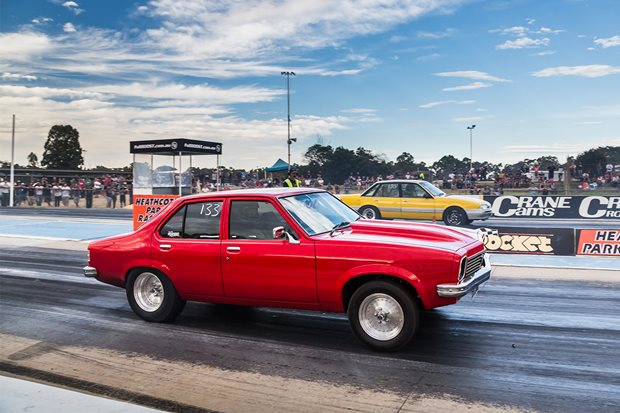 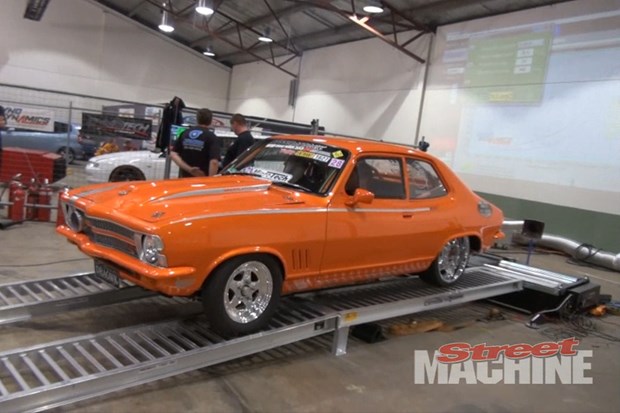 When it comes to screaming sixes, it’s hard to beat Toyota’s 2JZ engine 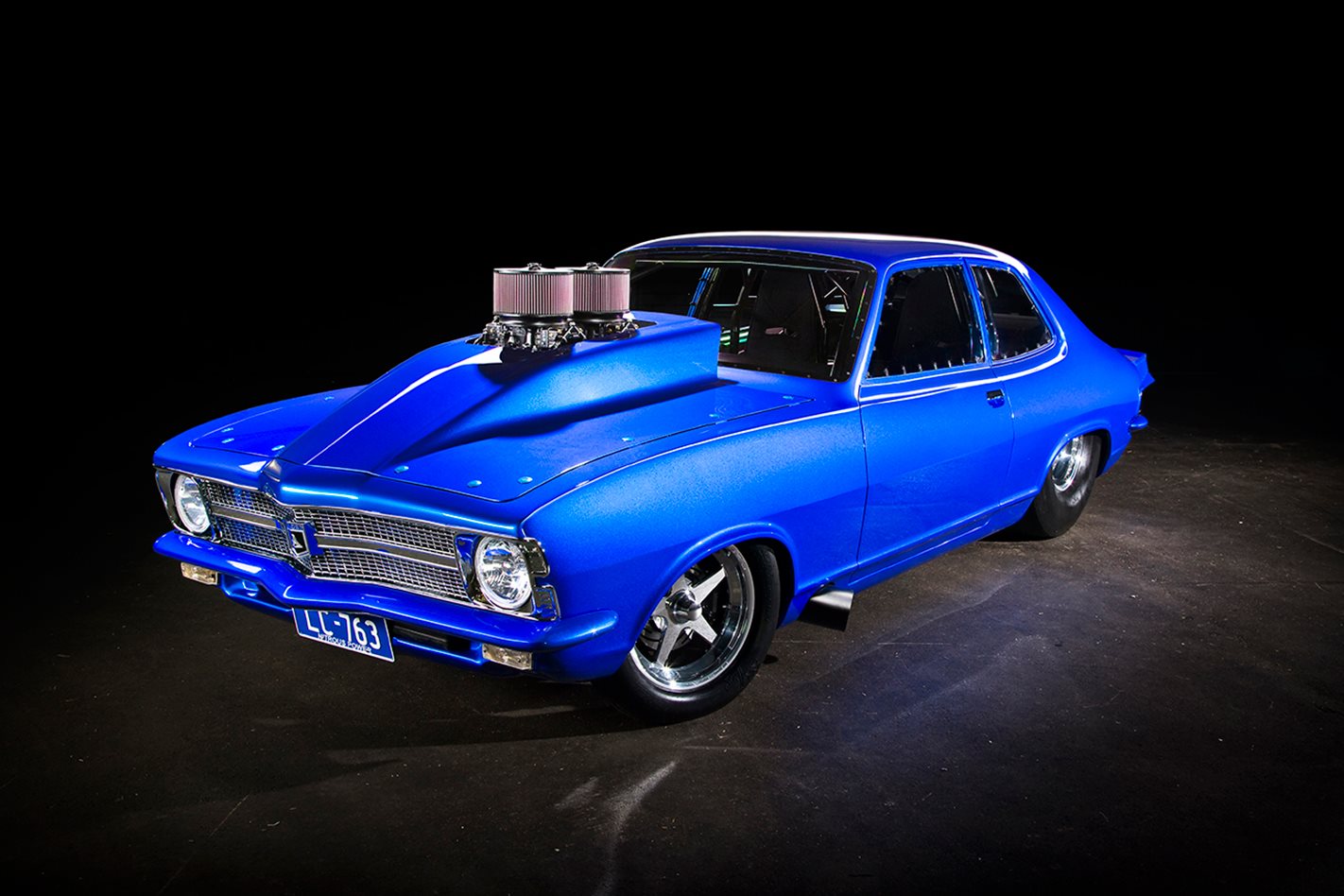 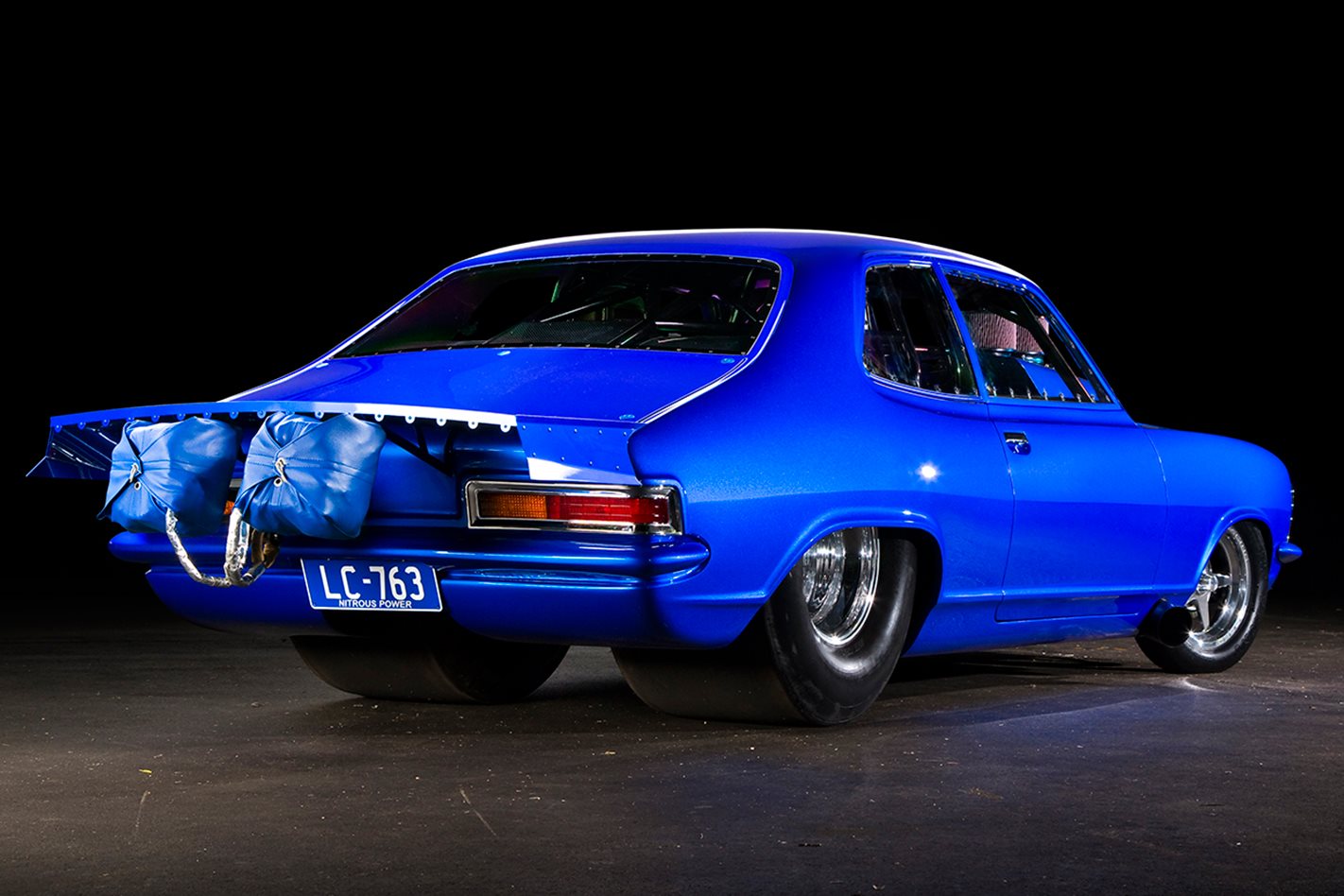 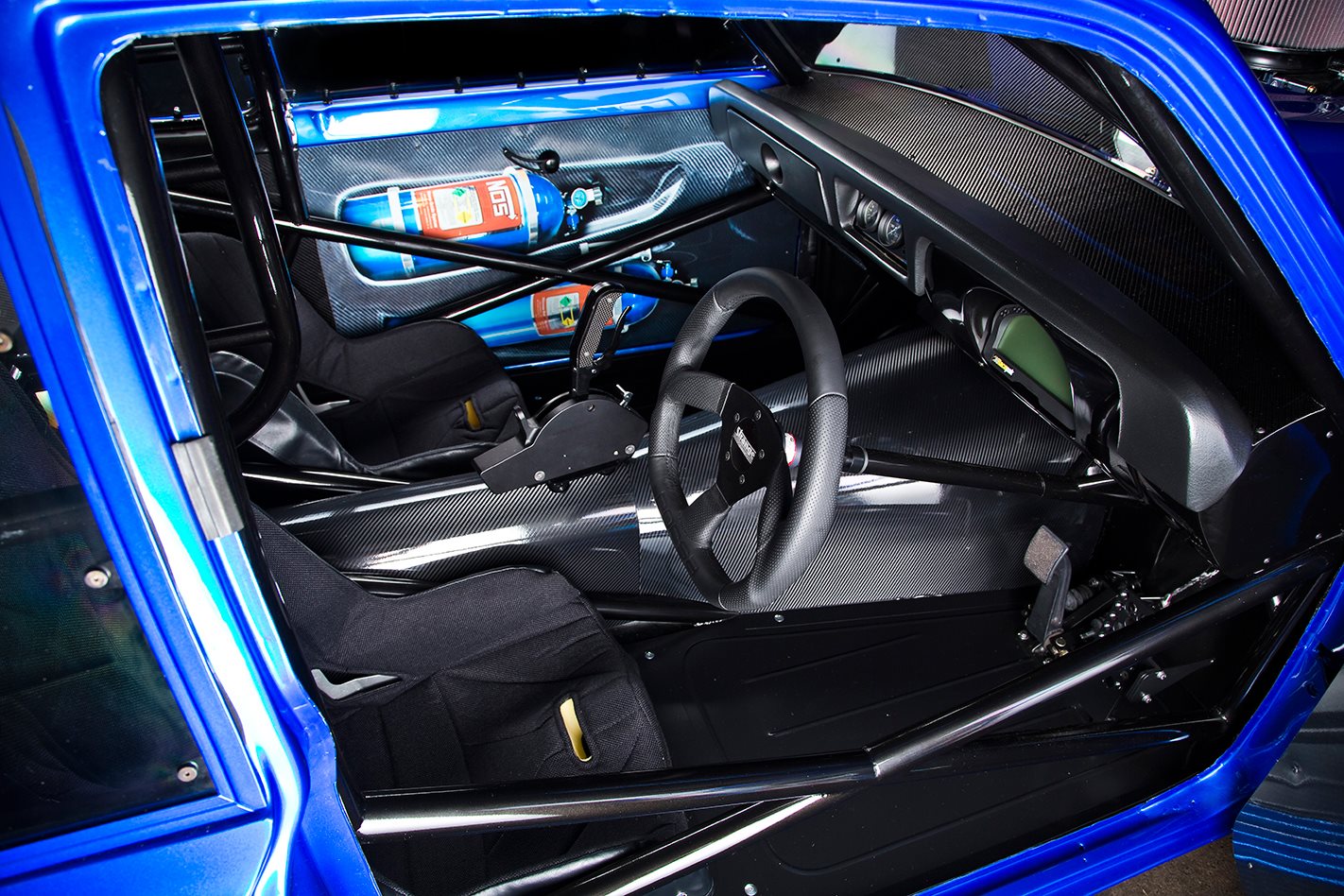 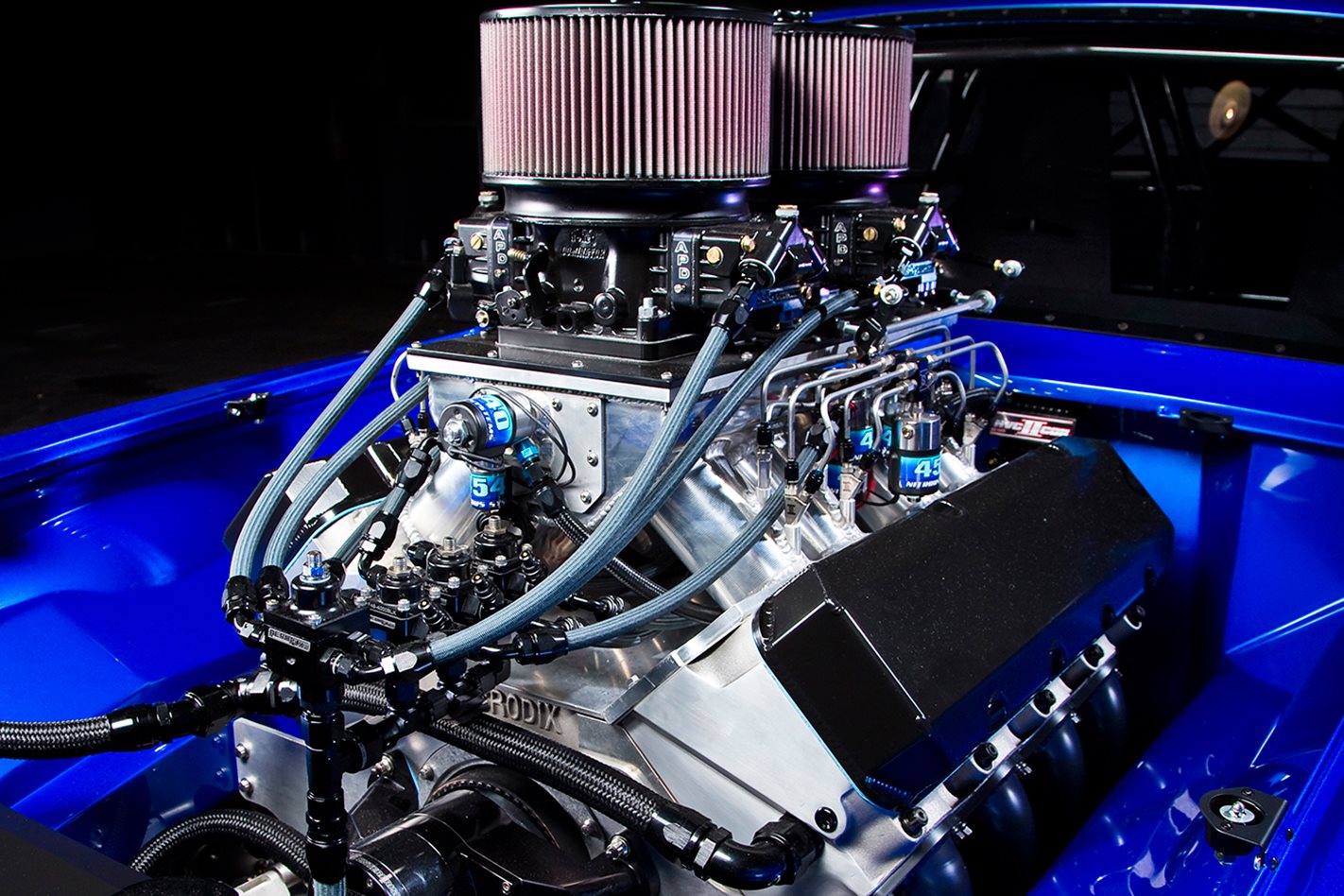 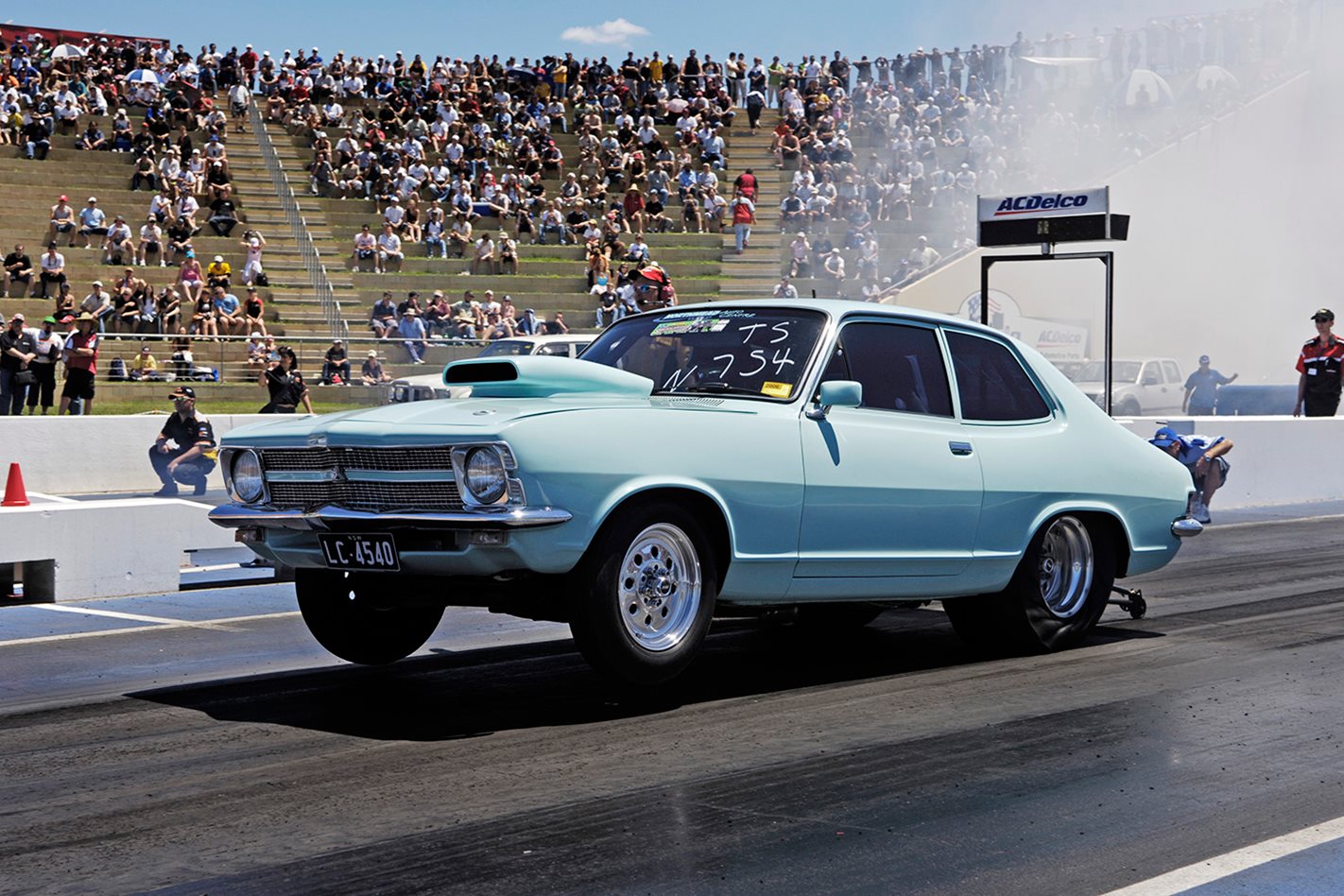 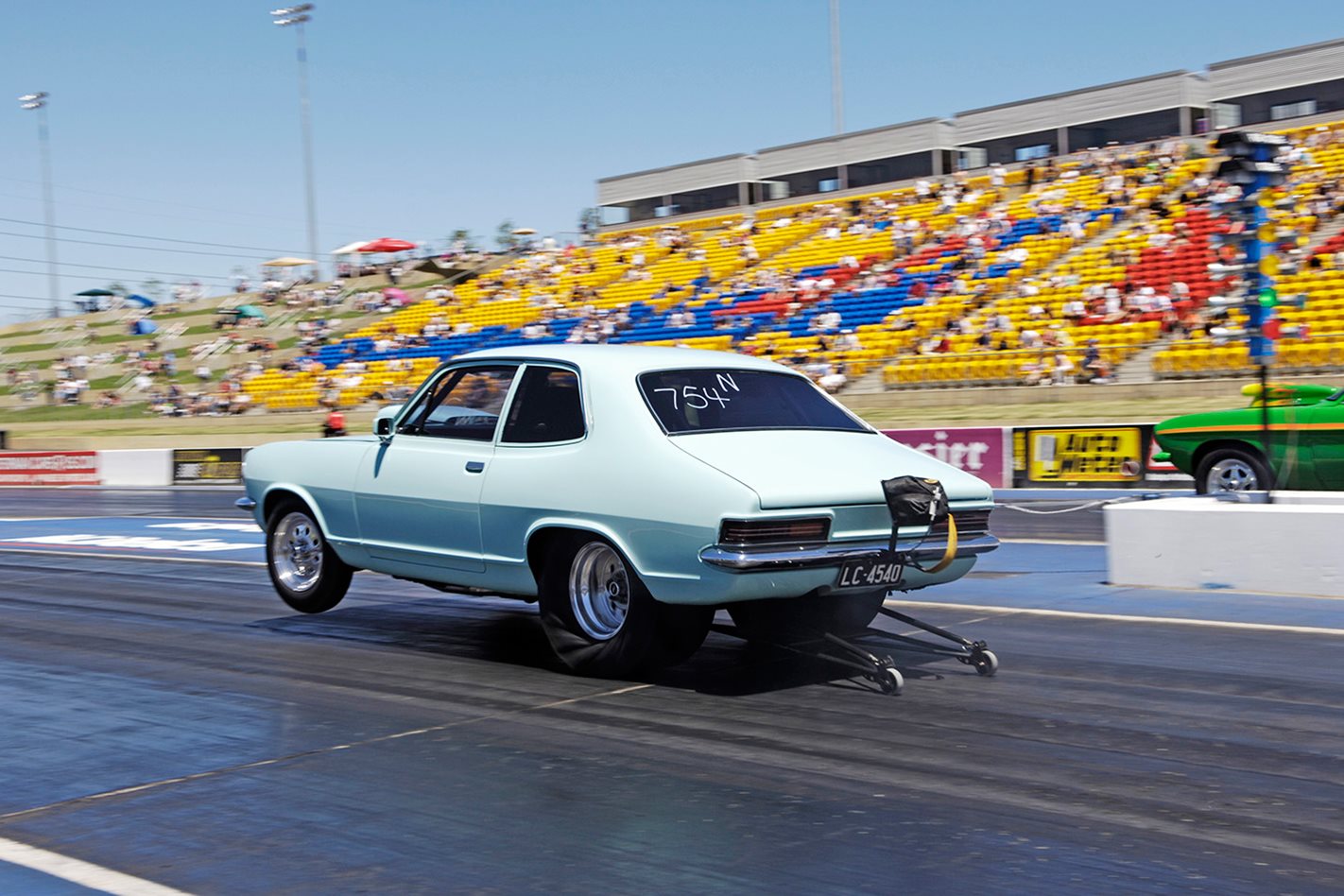