The Falcon has contributed so much to the growth and popularity of Australian touring car racing since its launch in 1960, it seems only fitting that SM remembers some of those magnificent flying machines

THE AUSSIE Ford Falcon has been the mainstay of the Blue Oval’s touring car racing heritage since 1960. Sadly, our much-loved ‘Bird of Prey’ has fallen out of favour with Australian road car buyers, with small sedans, SUVs and dual-cab utes increasingly taking its place. Sales have fallen so far that production is no longer sustainable.

By October 2016, the iconic Aussie Falcon will not exist. And when that famous production line at Broadmeadows grinds to a halt, it will also sound the death knell for a race car that has maintained its position at the highest level of Aussie tin-tops for more than five-and-a-half decades.

Despite the Falcon’s almost continuous presence on the racetrack, Ford Australia’s direct support of its local flagship in touring car racing has ebbed and flowed depending on the corporate mood at the time. Regardless, the support of loyal Ford fans from Baskerville to Bathurst has never wavered.

The Falcon has contributed so much to the growth and popularity of Australian touring car racing since its launch in 1960, it seems only fitting that SM remembers some of those magnificent flying machines. 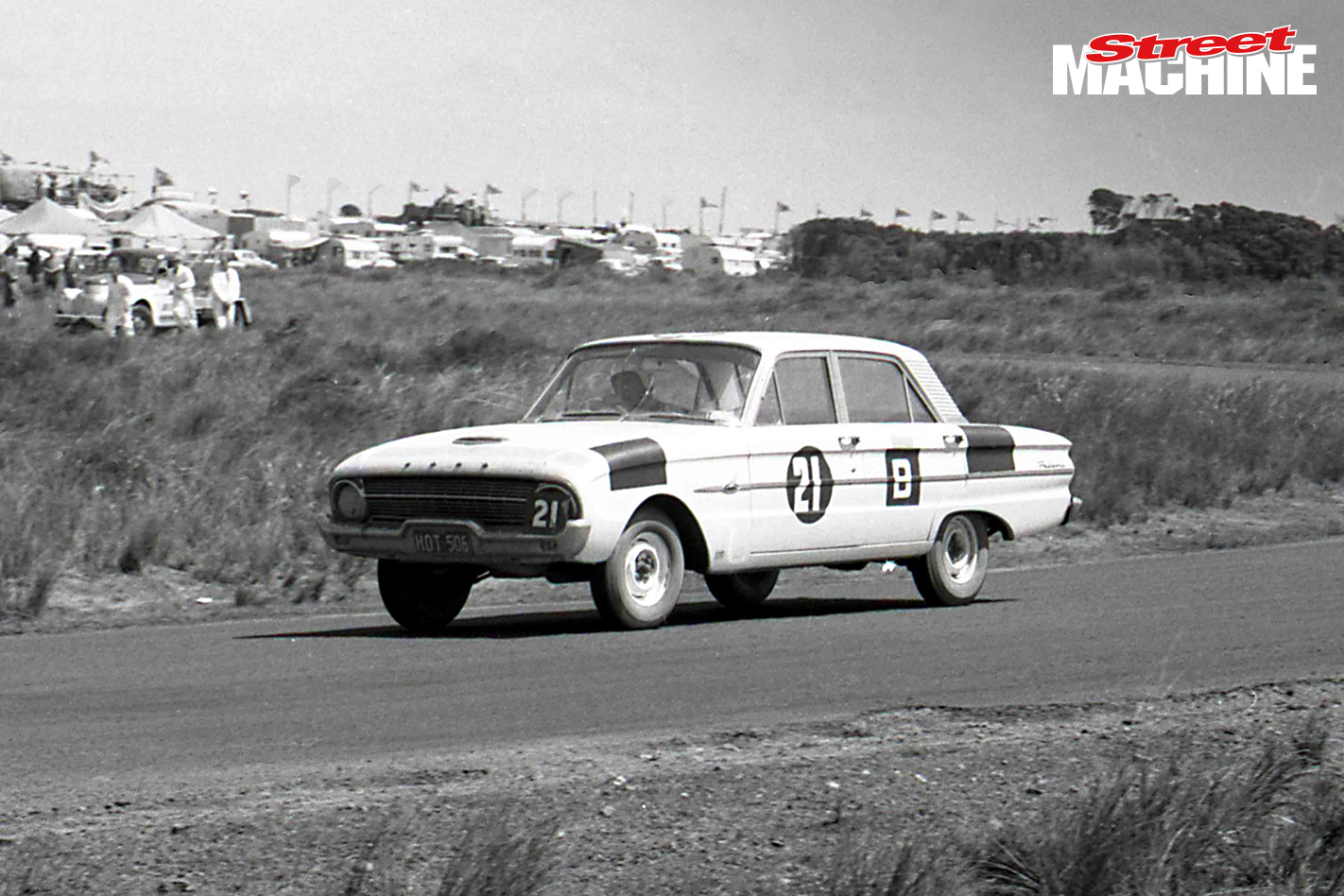 HARRY Firth prepared a three-car team of XK Falcons for the car-munching East African Safari in 1962, so he knew the early Falcon’s limitations on rough roads. He put that knowledge to good use in this new XL model when he and Bob Jane won the 1962 Armstrong 500, on a crumbling crater-riddled track that shook most cars to pieces. 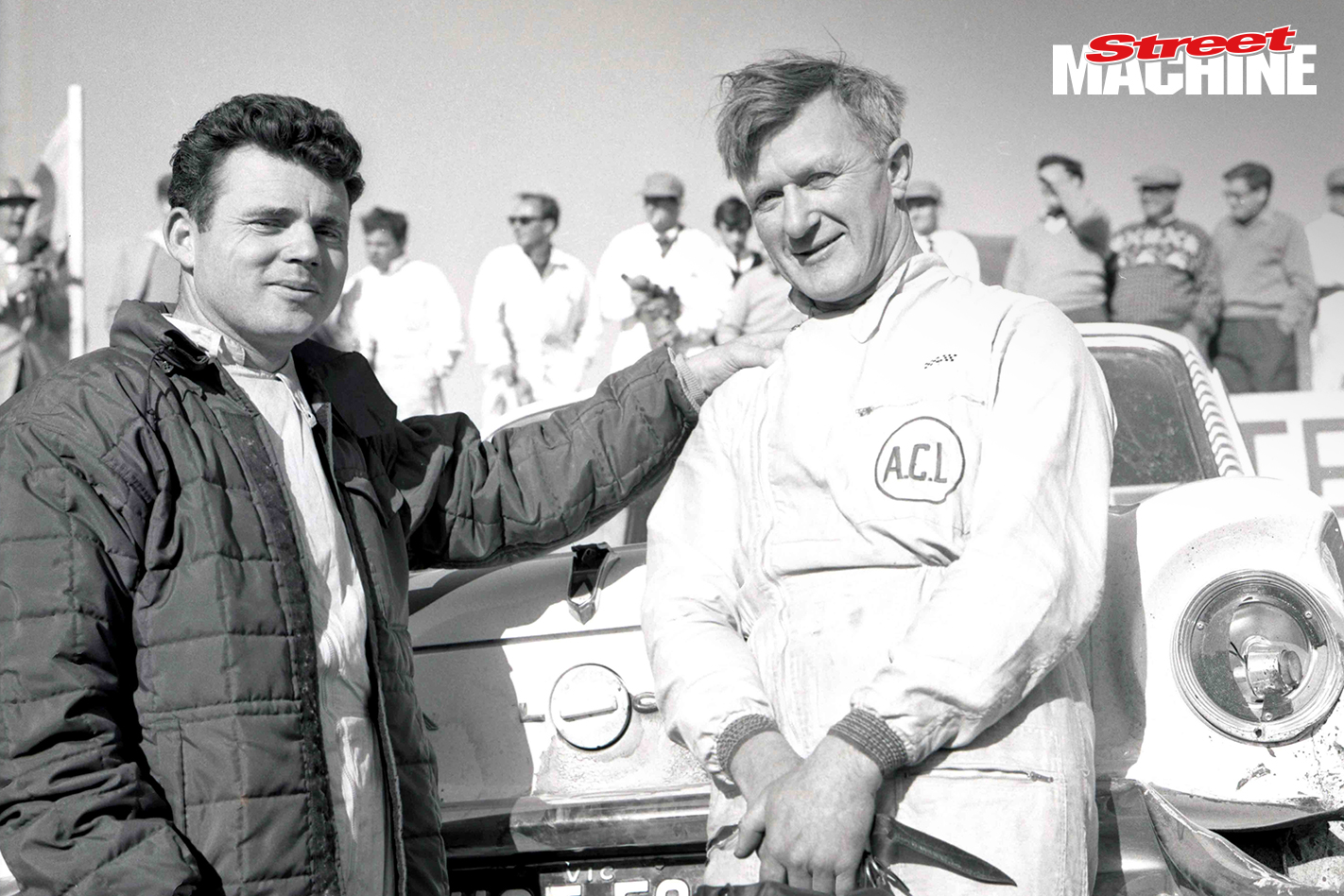 BOB Jane (left) and Harry Firth after their well-judged drive to victory at Phillip Island in 1962. These two blokes made a great combination, because they also won the 1961 Armstrong 500 in a Mercedes Benz 220SE and the 1963 event at Bathurst in a Ford Cortina GT. 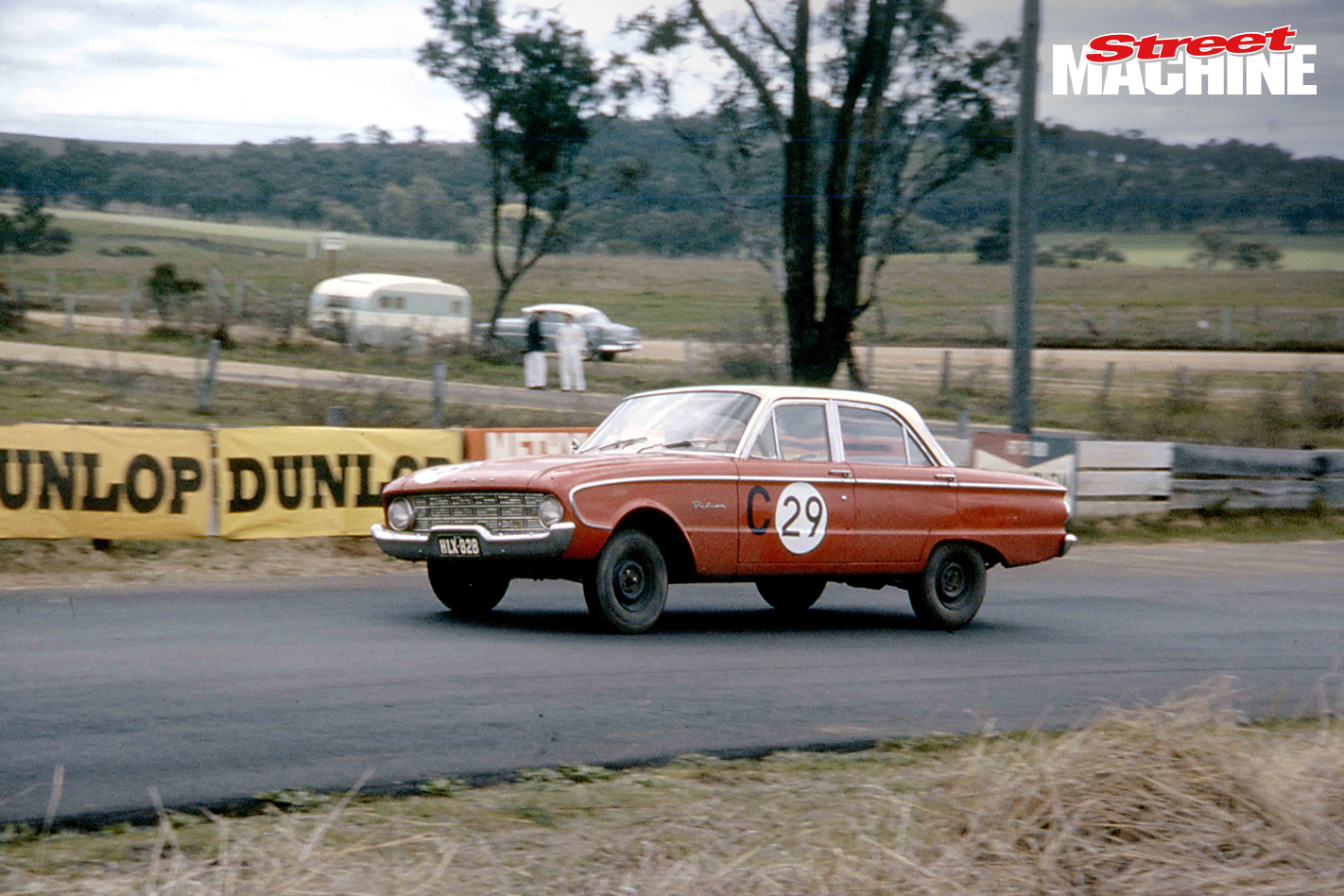 HARD to believe the Aussie Falcon’s Bathurst heritage can be traced back to the original XK model, with its tiny 2.4 litre six cylinder engine, bicycle tyres and drum brakes the size of shoe polish tins. This is the car Harry Firth and Bob Jane drove in the 1962 Bathurst Six Hour race for production sedans and sports cars. It rolled right here at Hell Corner due to chronic brake problems. 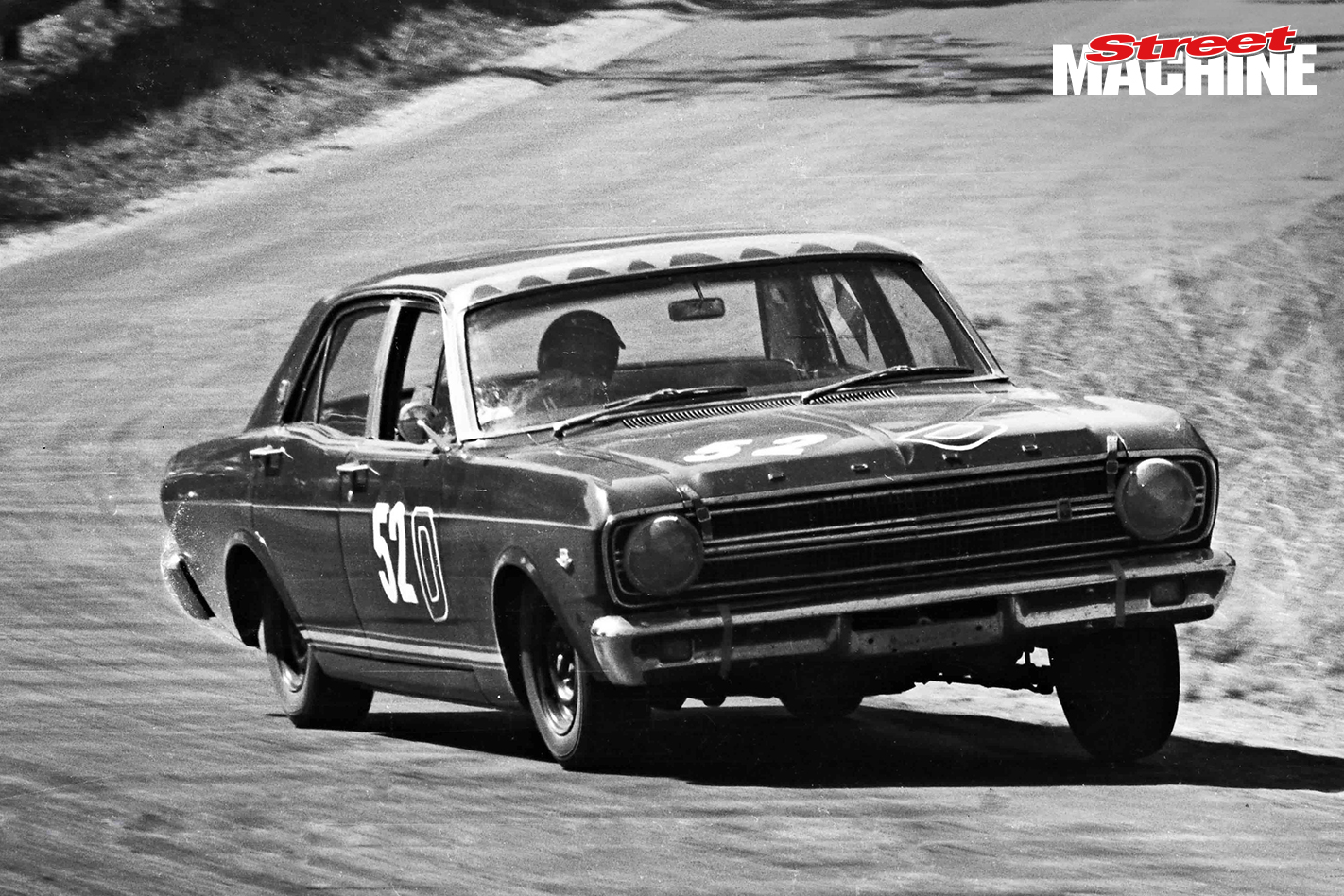 THERE'S a certain irony that Ford’s first Falcon GT was inspired by a police pursuit prototype based on the new V8-powered XR Falcon. No doubt a few of those hi-po cop cars would have ended up chasing the very same Falcon GTs which evolved from their police pursuit specials! This is the 1967 Bathurst 500 winner captured at full flight across the top of the Mountain. Check out the body roll and how hard that standard suspension is working. 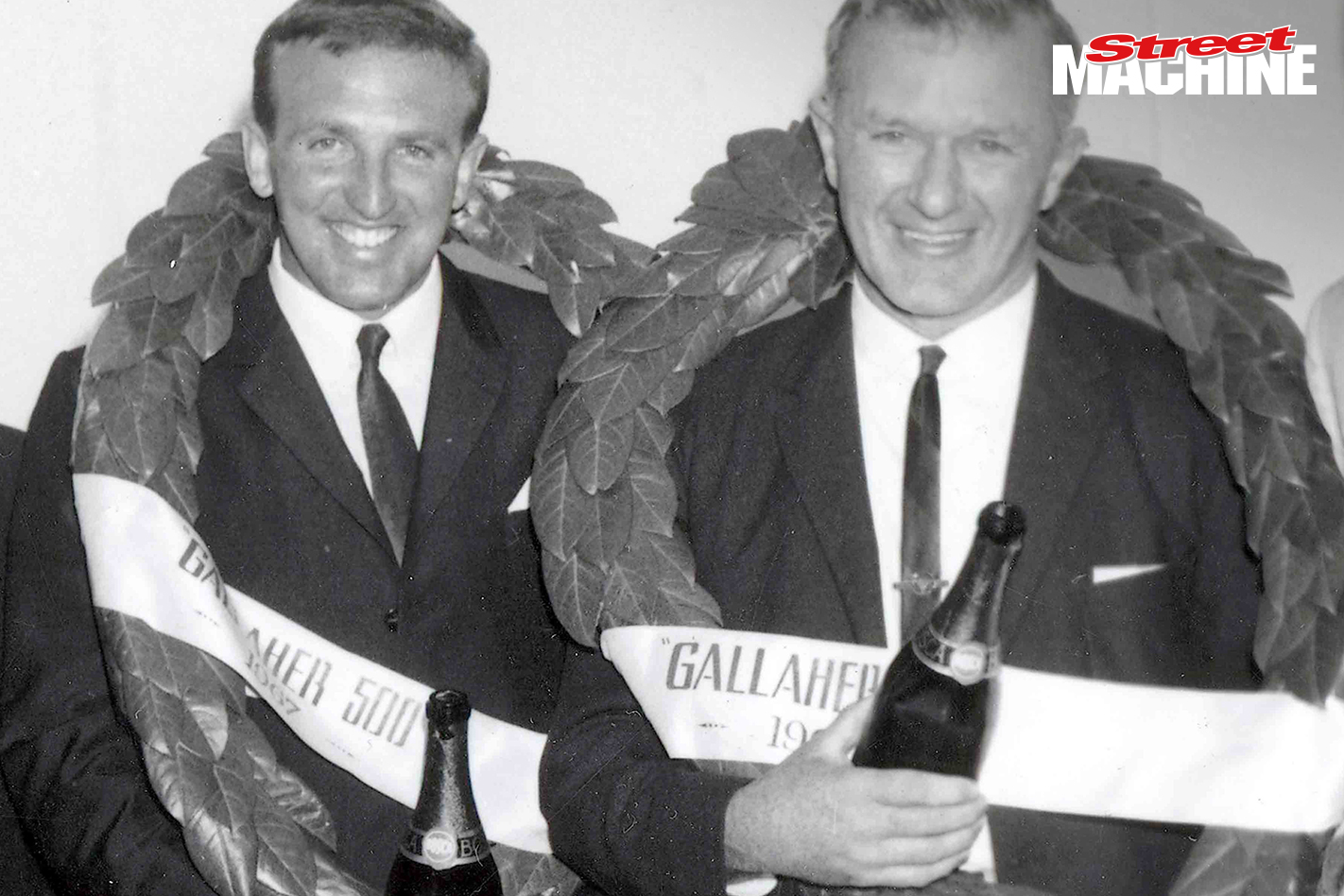 1967 Bathurst 500 winners Fred Gibson (left) and Harry Firth share the spoils of a famous victory. Gibson only got the drive with Firth after a personal recommendation from racing great Frank Matich, who was originally chosen to partner Firth but had to cancel due to clashing commitments. Gibson’s polished performance led to a full-time works drive with Ford. 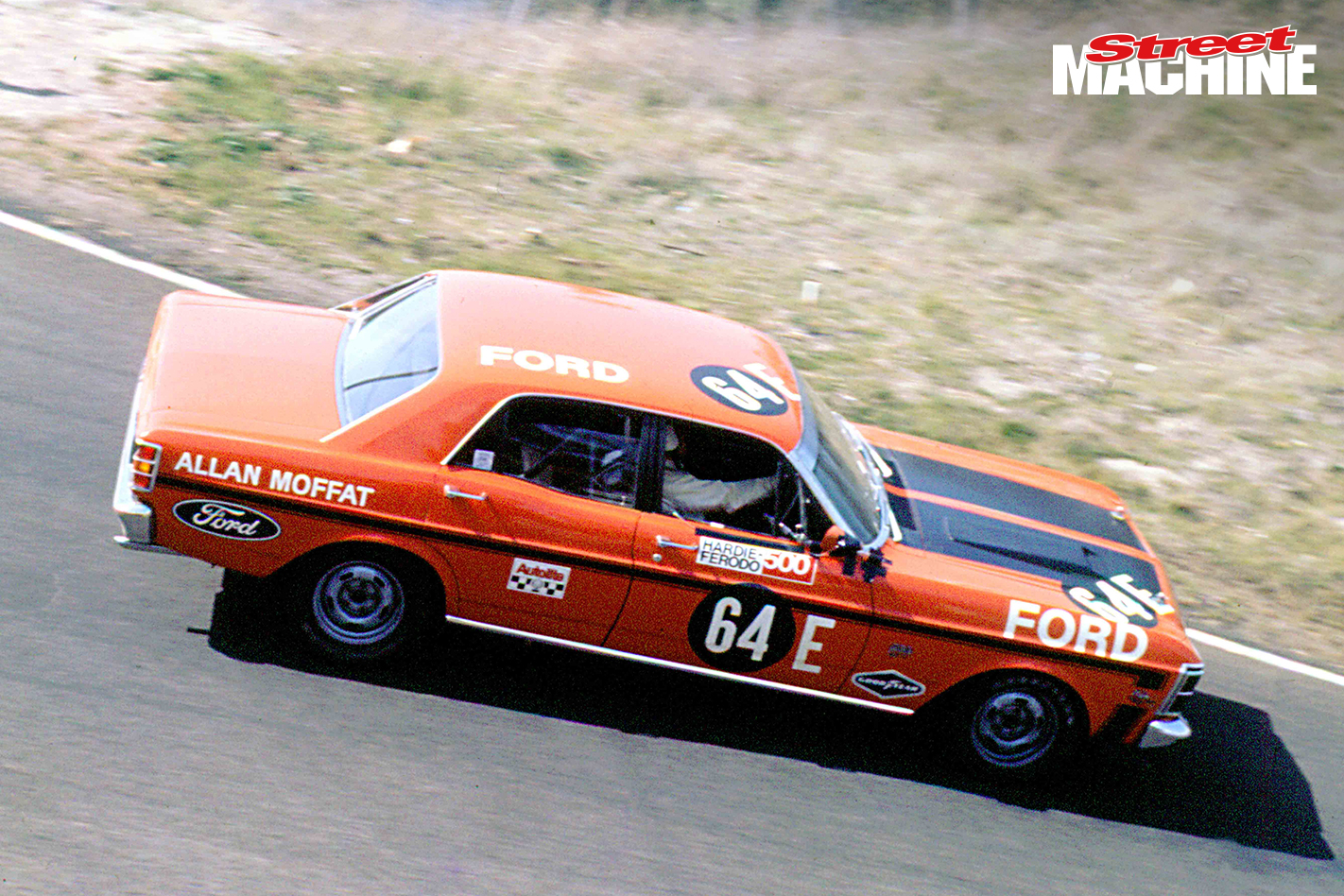 ALLAN Moffat guiding the brutish XW GT-HO Phase Two down through The Dipper on his way to victory in the 1970 Hardie-Ferodo 500 at Bathurst. The letters ‘HO’ originally stood for ‘High Output’ but were changed to ‘Handling Options’ just prior to launch to lower the pulse rates of the fun police and insurance companies. The GT-HO was effectively a race car with rego plates. 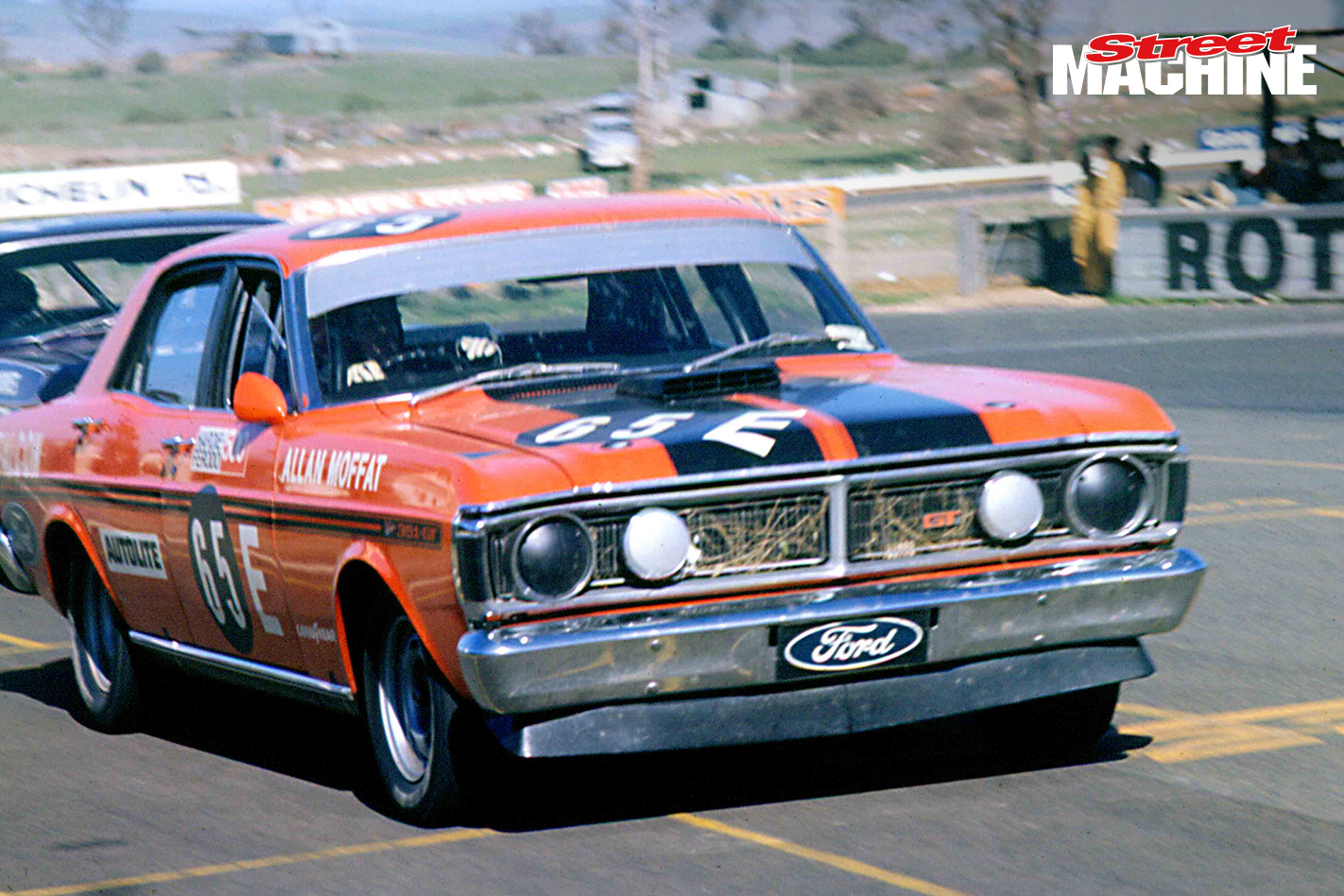 MOFFAT and the mightiest HO of them all – the fearsome Phase Three. This car and driver displayed such arrogant superiority in winning the 1971 Hardie-Ferodo 500, it was no surprise to hear claims that it was the fastest four-door sedan in the world at that time. Look at the amount of grass and debris plastered across the grille, kicked up by high winds during the race. At one stage this debris included a beer carton that partly blocked this car’s radiator for many laps, but the temperature gauge never moved. 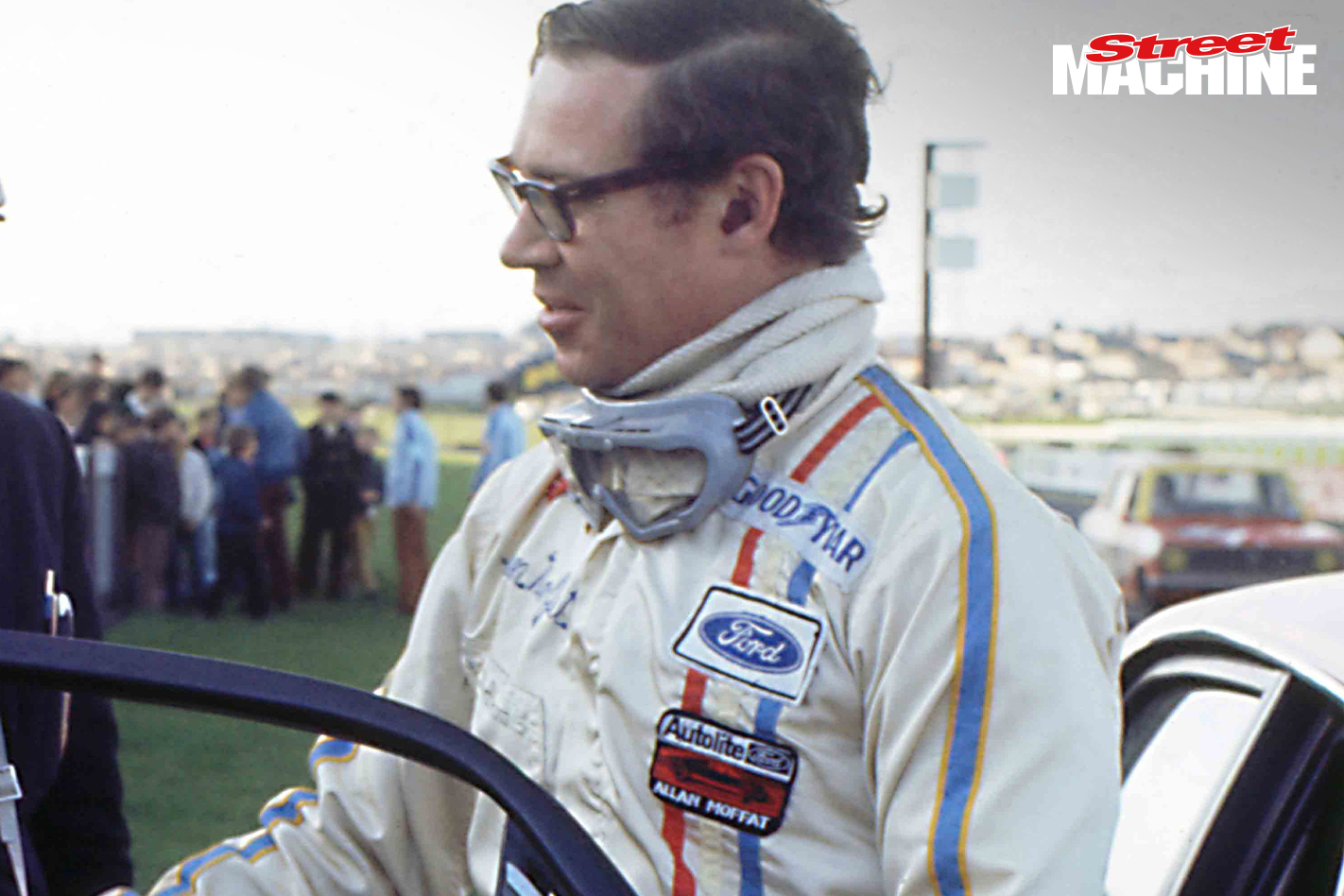 MAN ON A mission. Allan Moffat became a Ford works driver in 1969 and instantly repaid the faith with a dazzling debut victory for the new XW GT-HO in that year’s Sandown Three-Hour race. Team-mate Fred Gibson said Moffat’s precise throttle control was a big factor in his ability to tame those cars and make their tortured rear tyres last longer than anyone else’s. 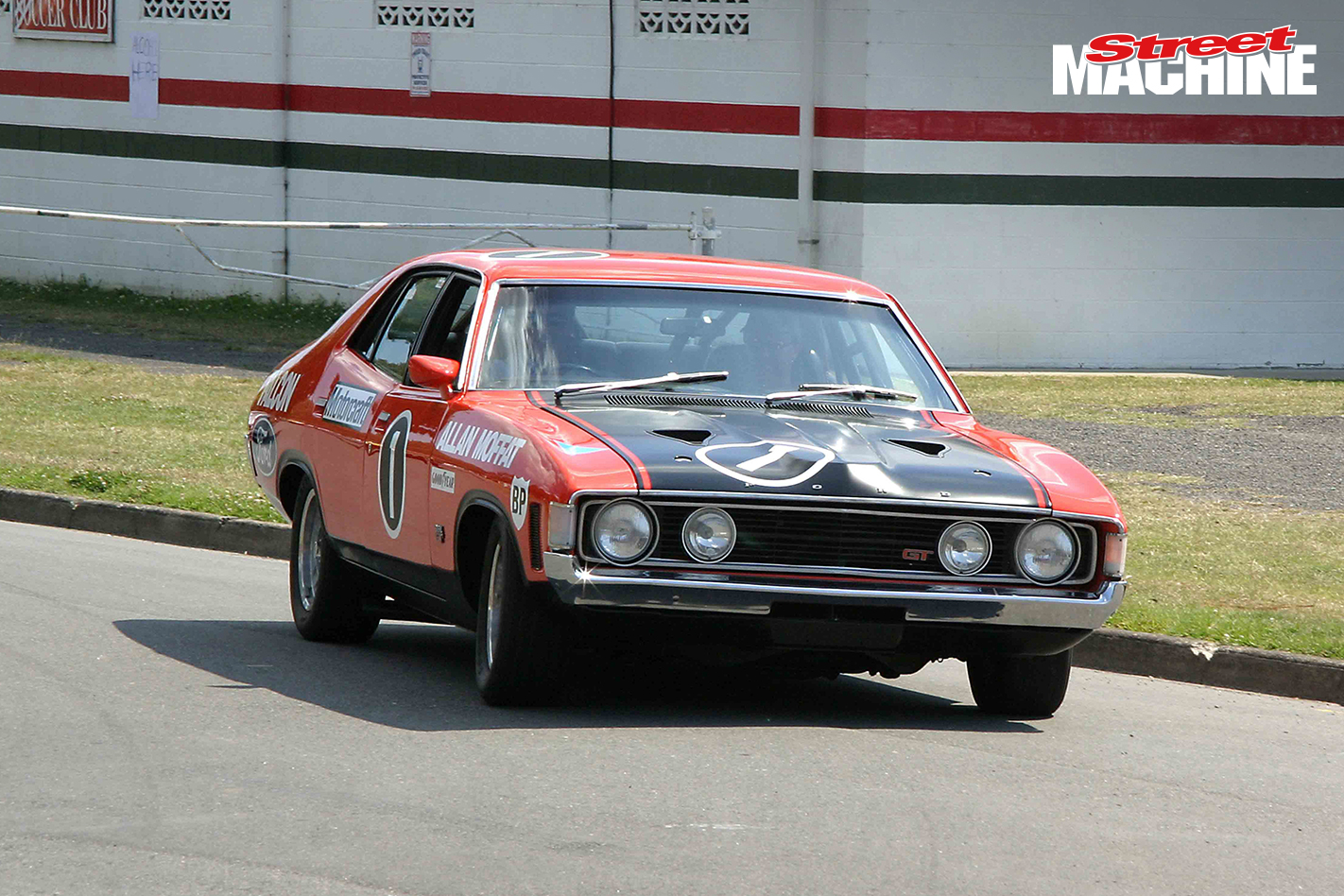 FORD'S stillborn XA GT-HO Phase Four was so close to going into production that three XA GTs had already been taken off the line and sent to Ford Special Vehicles for conversion to Phase Four racing specifications. This is one of those three cars now owned by Queensland collector David Bowden, being track displayed at the 2004 Speed on Tweed. It had been fully prepared for racing and even track-tested before the GT-HO program was axed. 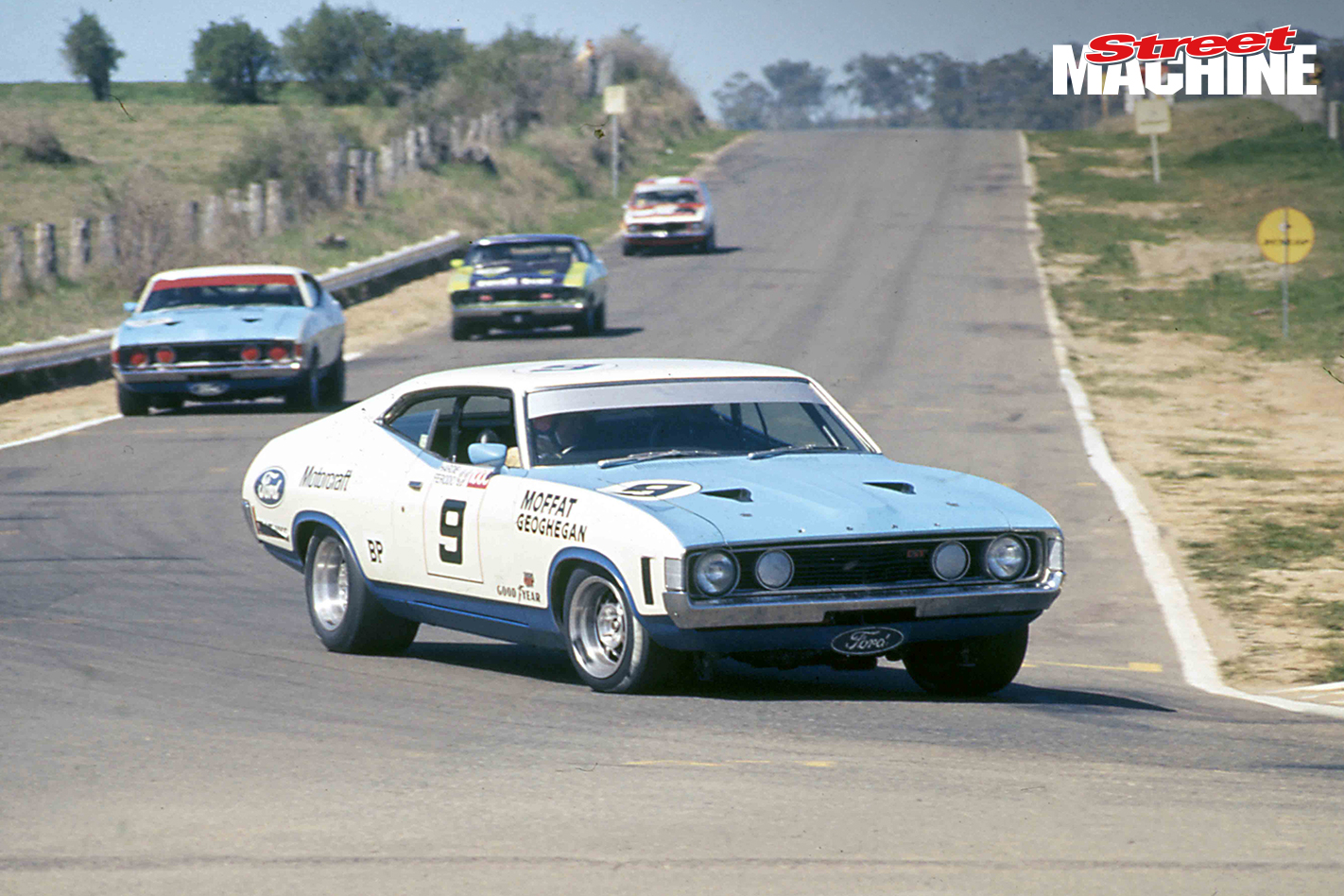 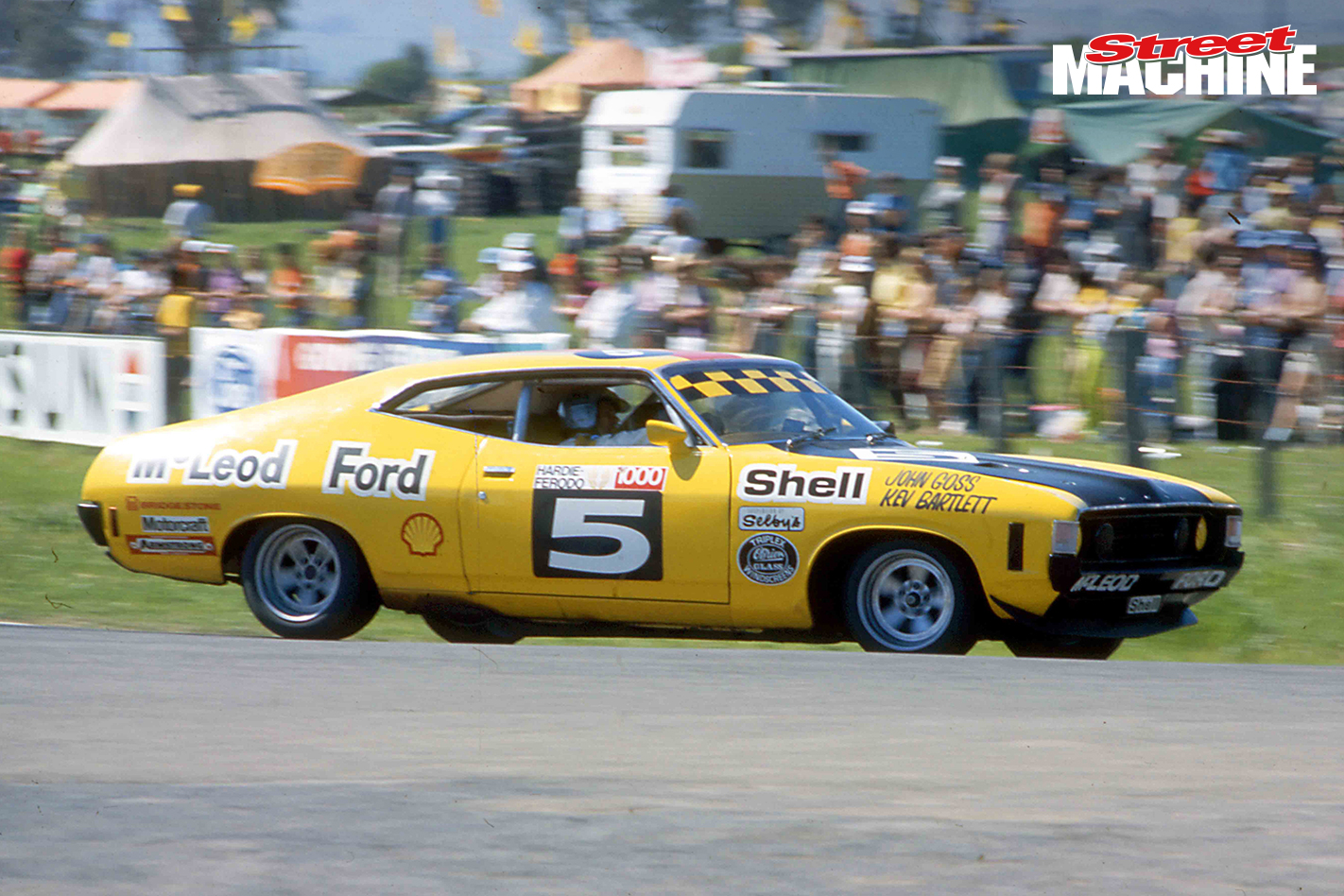 DEALER-BACKED privateer John Goss blazed his own development path with the new XA GT Hardtop in 1973, against the wishes of the Ford works team which didn’t want to see the new car on the track until it had completed its own race development. Goss took pole position at Bathurst in 1973 and with co-driver Kevin Bartlett led the race for several hours until a collision with another car led to engine problems. Goss and Bartlett returned and won the race in this car (with different paint scheme) the following year. 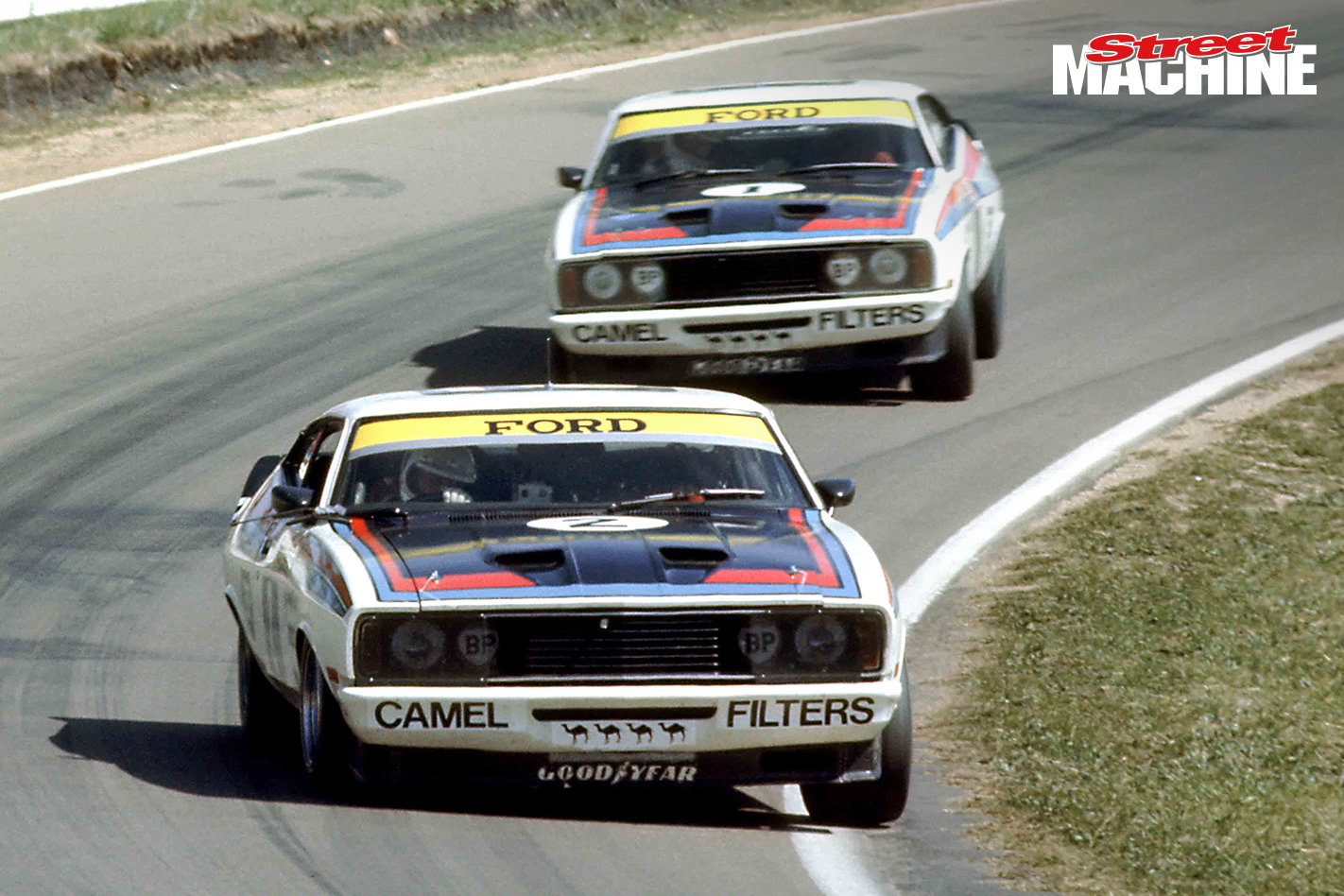 A DEMORALISING sight for any Holden fan in 1977 was the Moffat Ford Dealers Team Falcon Hardtops destroying their beloved Toranas at every opportunity. At Bathurst in 1977, these Hardtops were supposed to be fitted with reverse-facing bonnet scoops like the rival Torana A9X, which drew engine intake air from the high pressure zone at the base of the windscreen. The new scoops were not approved in time. Not that it mattered, given their runaway 1-2 finish. 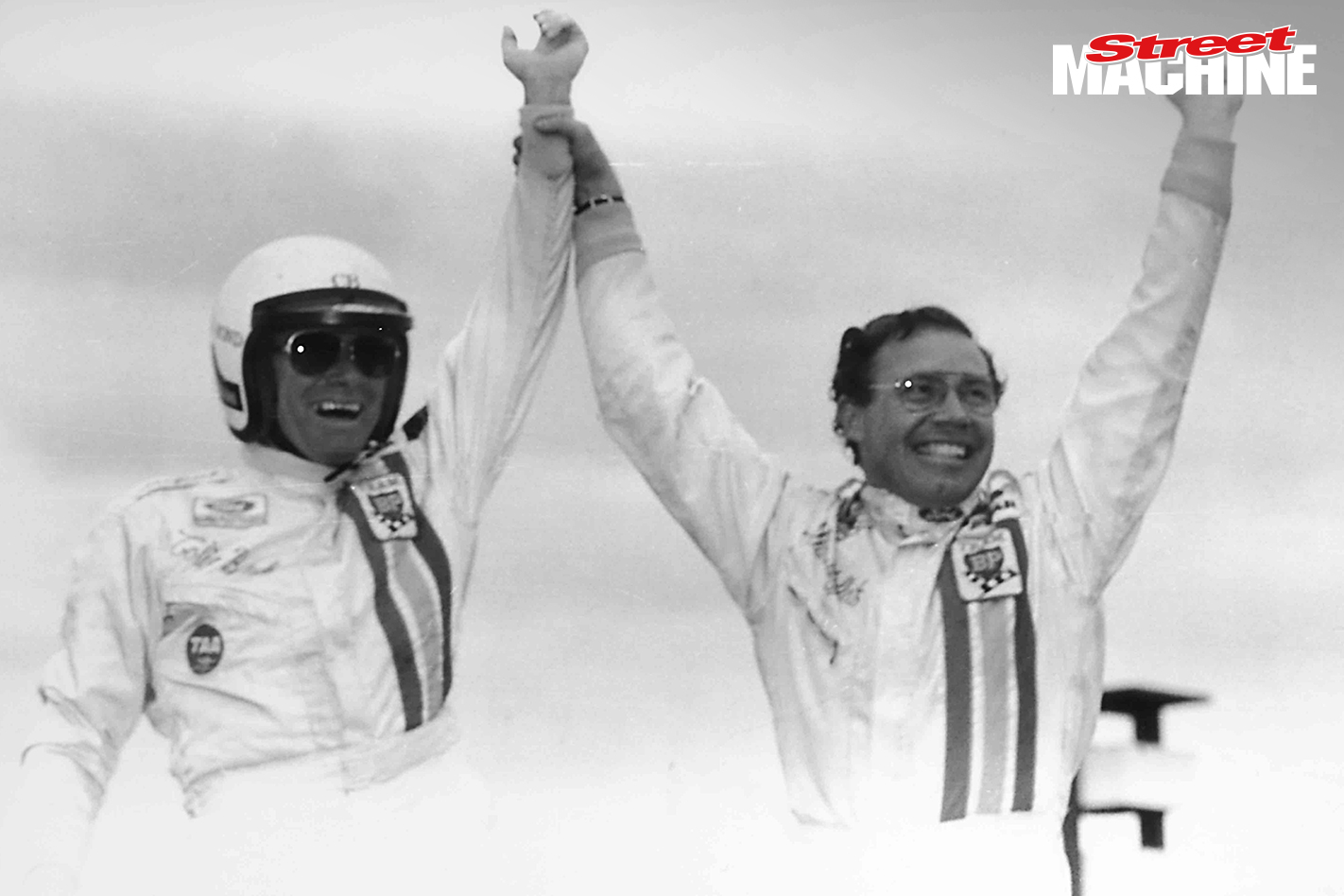 COLIN Bond (left) defected from Holden, after eight years with the Holden Dealer Team, to drive for Allan Moffat in 1977. They were a formidable combination that achieved great success, even though they never got to drive together at Bathurst because Ford wanted them in separate cars to give the team the best chance of success if one car failed. 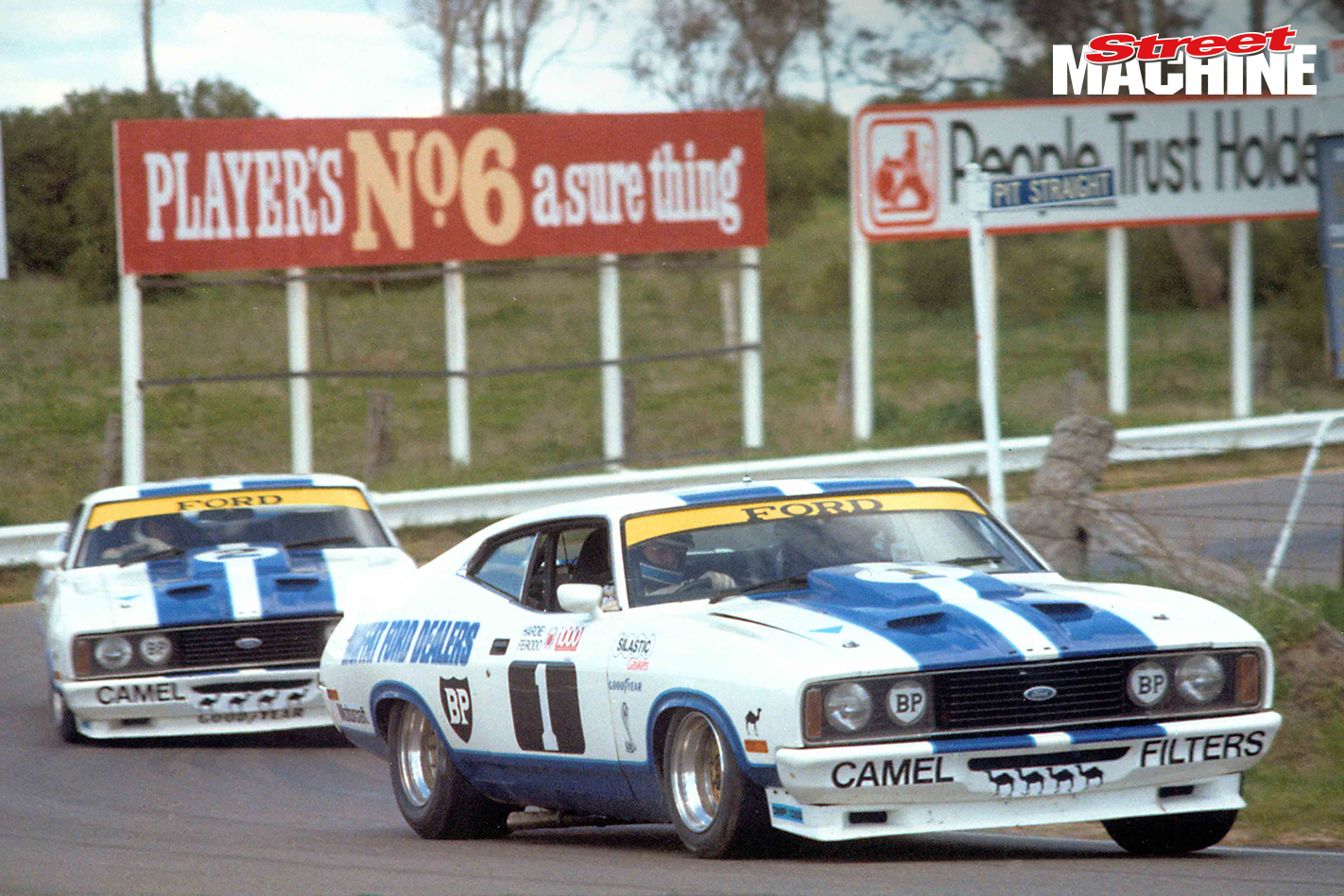 IN 1978 Edsel Ford II came up with a brilliant way to rid Ford Australia of 400 Falcon two-door Hardtop bodyshells which were proving harder to sell than ice to eskimos. The limited edition XC Falcon Cobra, with eye-catching blue and white colour scheme, was an instant sell-out. To push the marketing message, the Moffat Ford Dealers Team cars were repainted as Cobras for the 1978 Bathurst 1000. It was not a good omen - but man they looked good while they lasted! 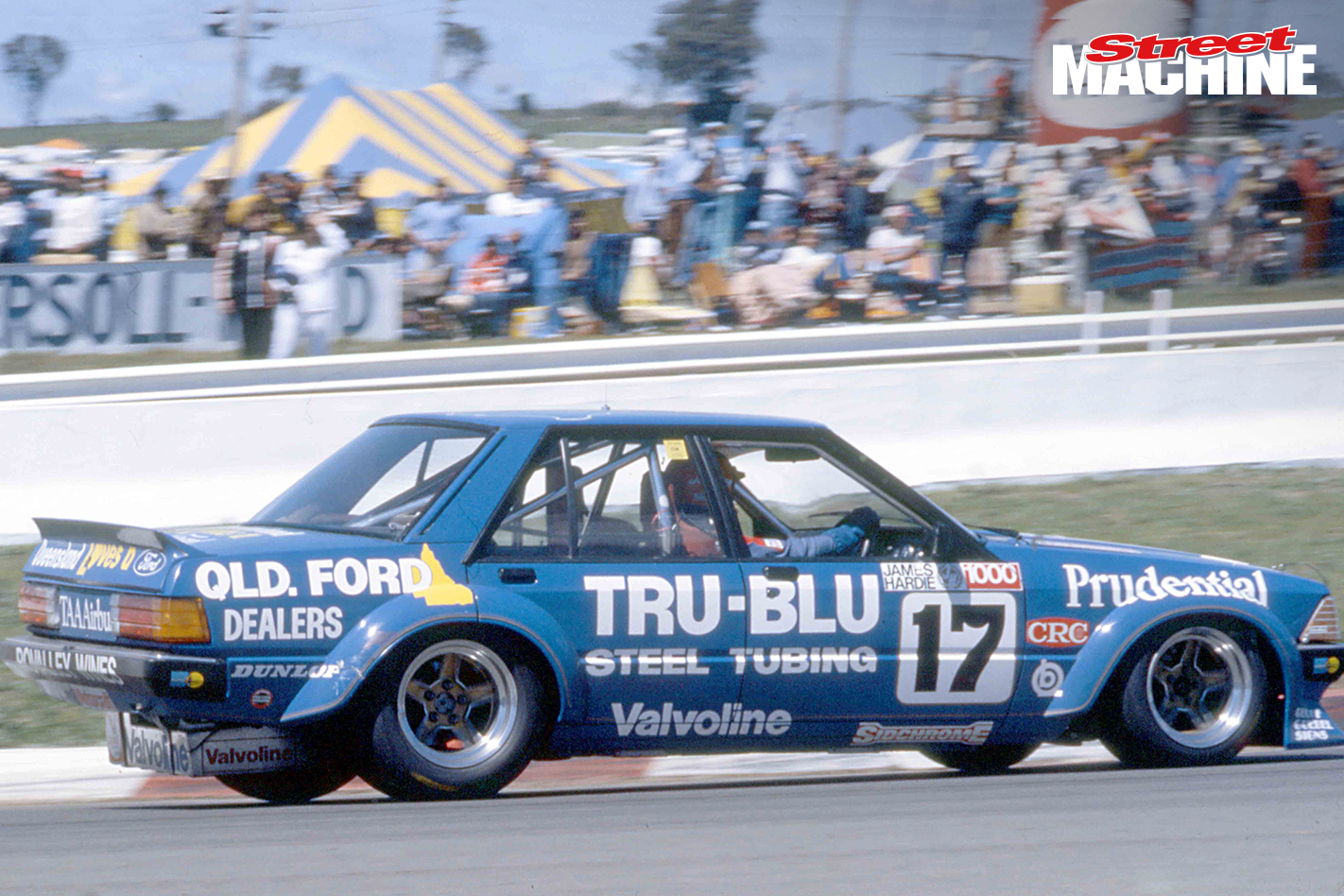 FORD was not going to race its new XD Falcon in 1980 because it thought the rules were being manipulated by Holden to ensure the VB Commodore would be a runaway winner. It was only through the behind-the-scenes efforts of several Ford devotees that the XD made it onto the track - and what a champion race car it proved to be. Here ‘Tru-Blu II’ is on its way to victory in the crash-shortened 1981 Bathurst 1000. 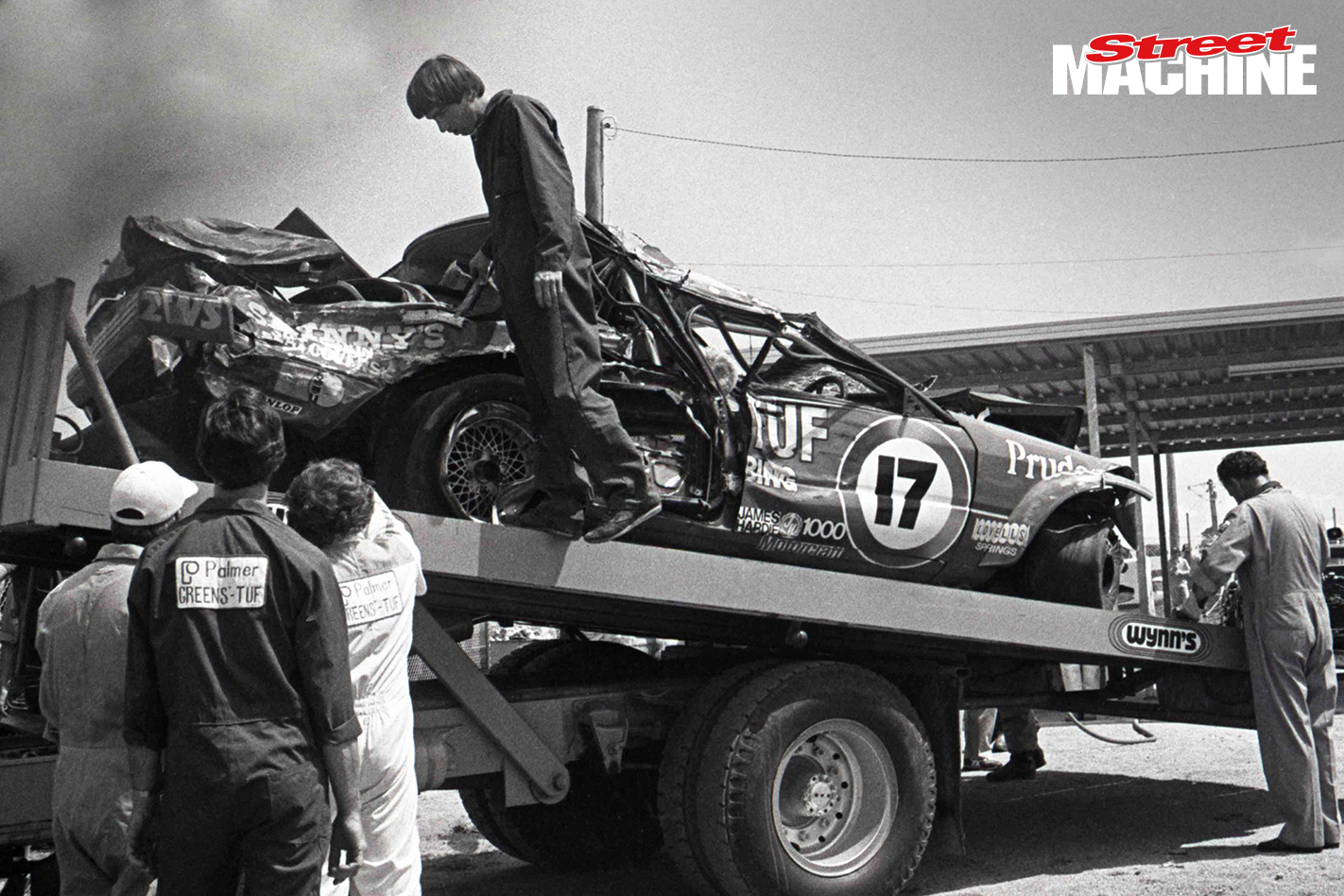 THIS was all that was left of Dick Johnson’s first ‘Greens-Tuf’ XE Falcon after a broken steering arm sent it firing off into the trees at Forrest’s Elbow during his Top 10 qualifying run. What followed was a desperate all-night rebuild using a donor XE bodyshell, with its new coat of green paint still wet as Johnson just made it onto the starting grid in time for the race. Not surprisingly, the hastily-built car retired early, with Johnson famously quoted on national TV: “This car is such a dog we should have left it chained to the fence!” 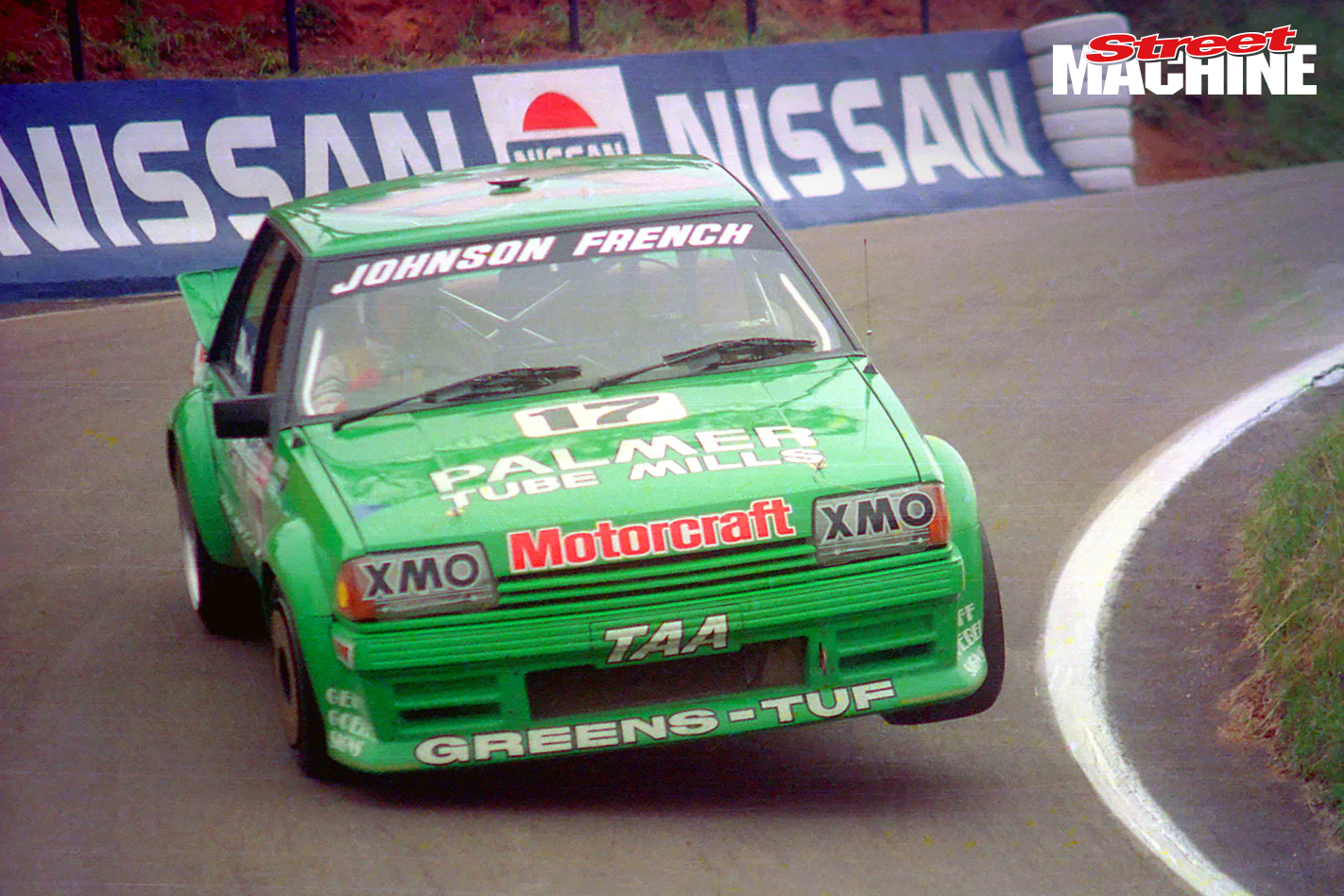 JOHNSON'S ‘Greens-Tuf II’ was a superior car to the original. It won the 1984 ATCC thanks largely to Johnson’s impressive consistency which saw him win one round and finish no lower than third in all the others. Here the big green brute is on the limit through Mount Panorama’s infamous Dipper at the 1984 Bathurst 1000 – the last for the mighty Group C cars. The XE retired with transmission failure. 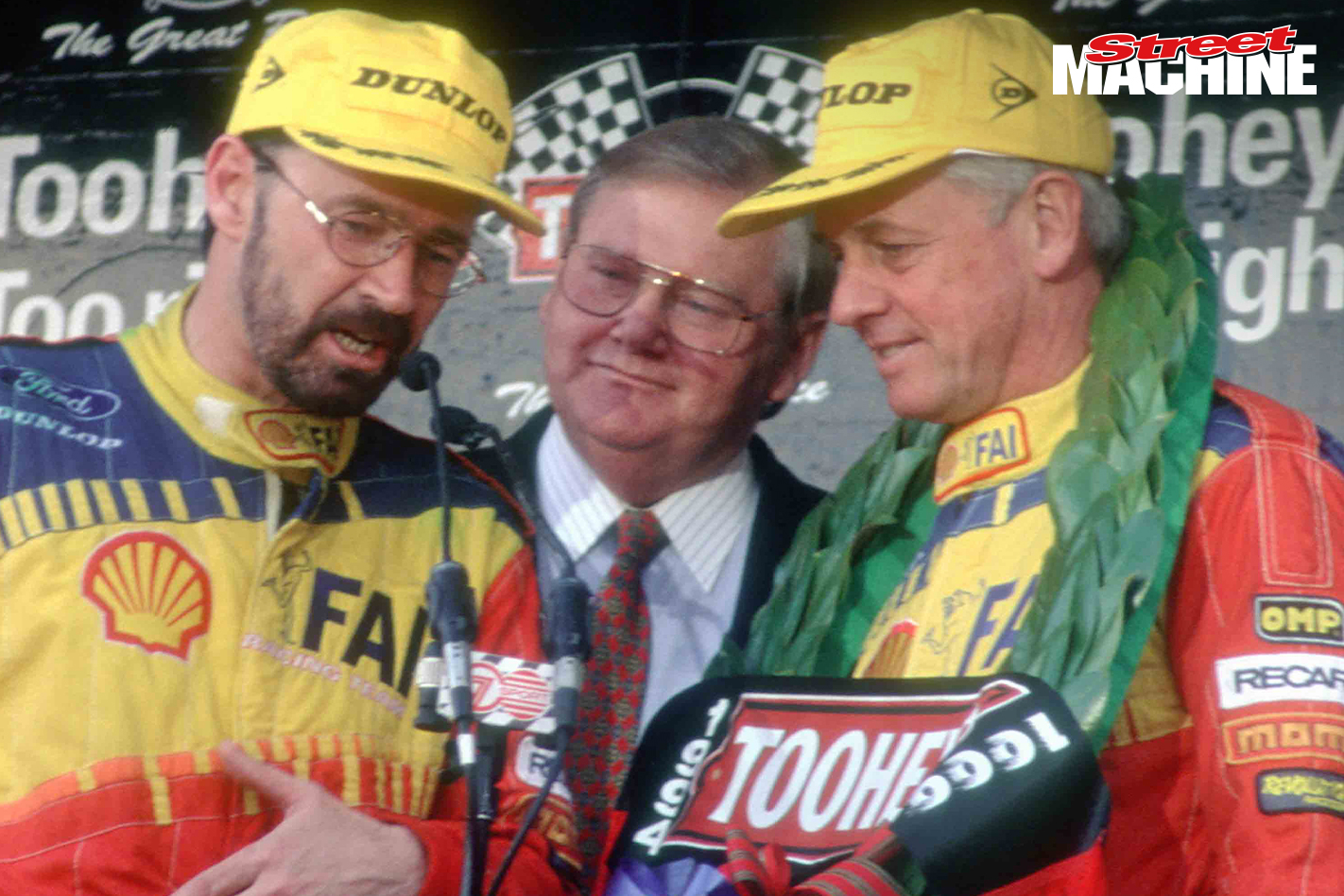 DICK Johnson and John Bowe on the podium at Mount Panorama, celebrating their popular win in the 1994 Bathurst 1000.  Johnson and Bowe were a terrific driving combination at Bathurst, also winning the 1989 race together in a turbocharged Ford Sierra and coming close to other outright victories on several occasions. 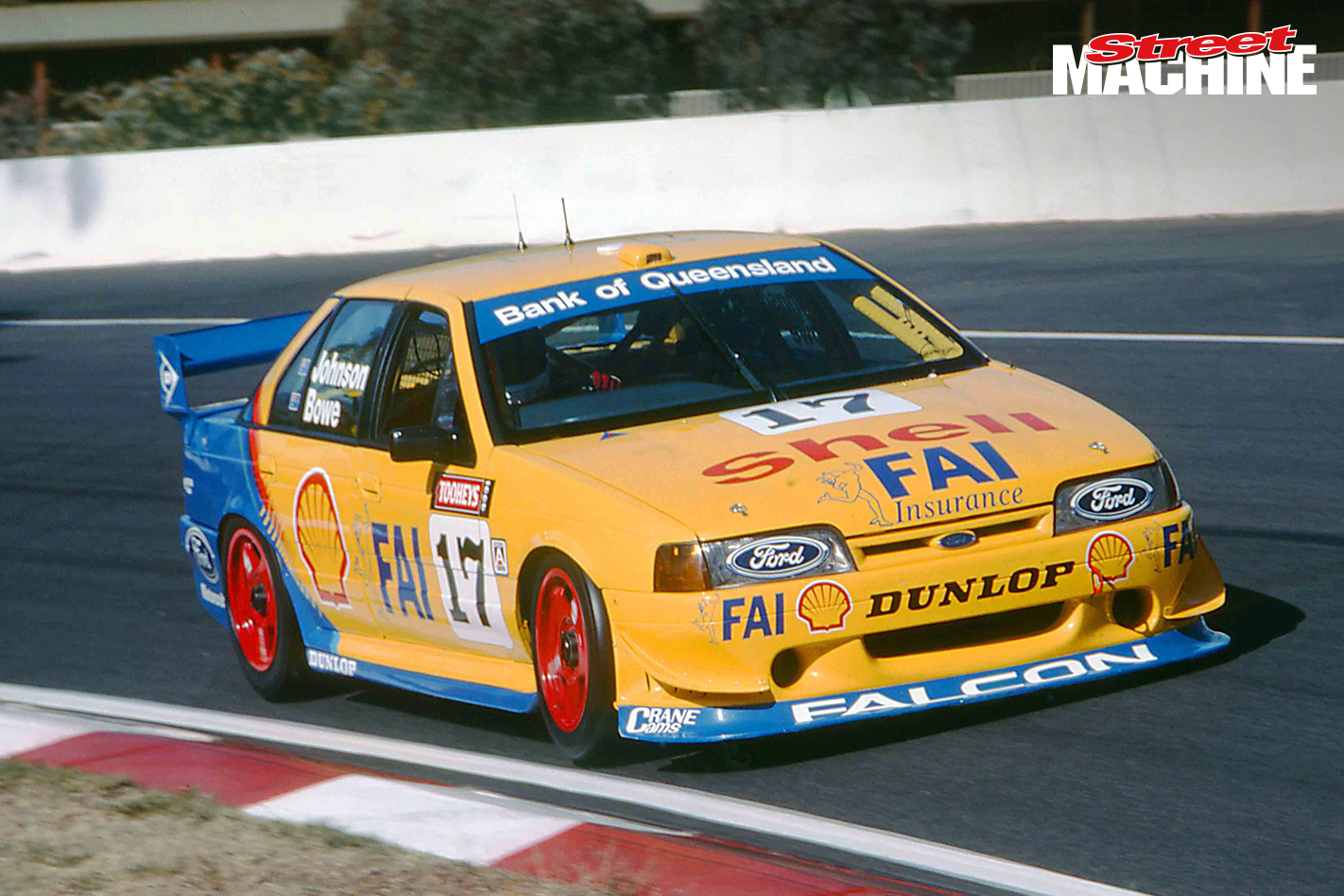 THE 1994 Bathurst-winning EB Falcon powering through Griffin’s Bend at Mount Panorama. Note the small winglets on the front spoiler which were part of an aerodynamic upgrade for the EB Falcons prior to the 1994 season. Bowe described this car as one of the best he’d ever driven at Bathurst. That was largely thanks to the combined talents of Kiwi brothers Ross and Jim Stone, who headed the engineering side of the DJR cars until setting up their own rival Ford team in 1996. 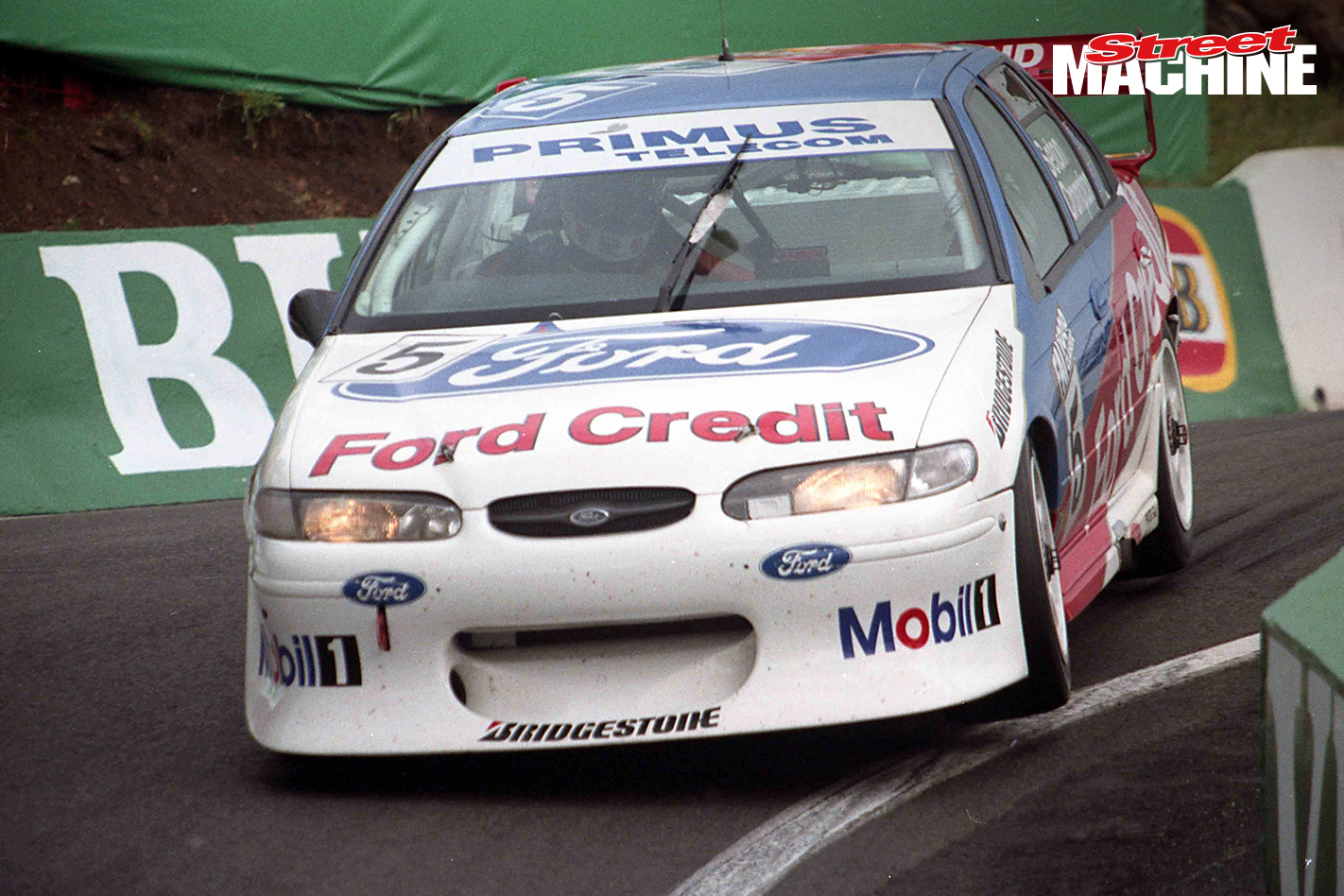 GLENN Seton was one of Ford’s frontline fighters during the Falcon vs Commodore V8 wars of the 1990s, claiming two ATCC (or V8SCS) titles. The Ford Credit-backed EL Falcon, in which he won his second crown in 1997, was a gun-looking race car as seen here. Seton and co-driver Neil Crompton were one of the fastest combinations at Bathurst in 1998, but time lost fixing a ruptured oil line kept them out of a major placing. 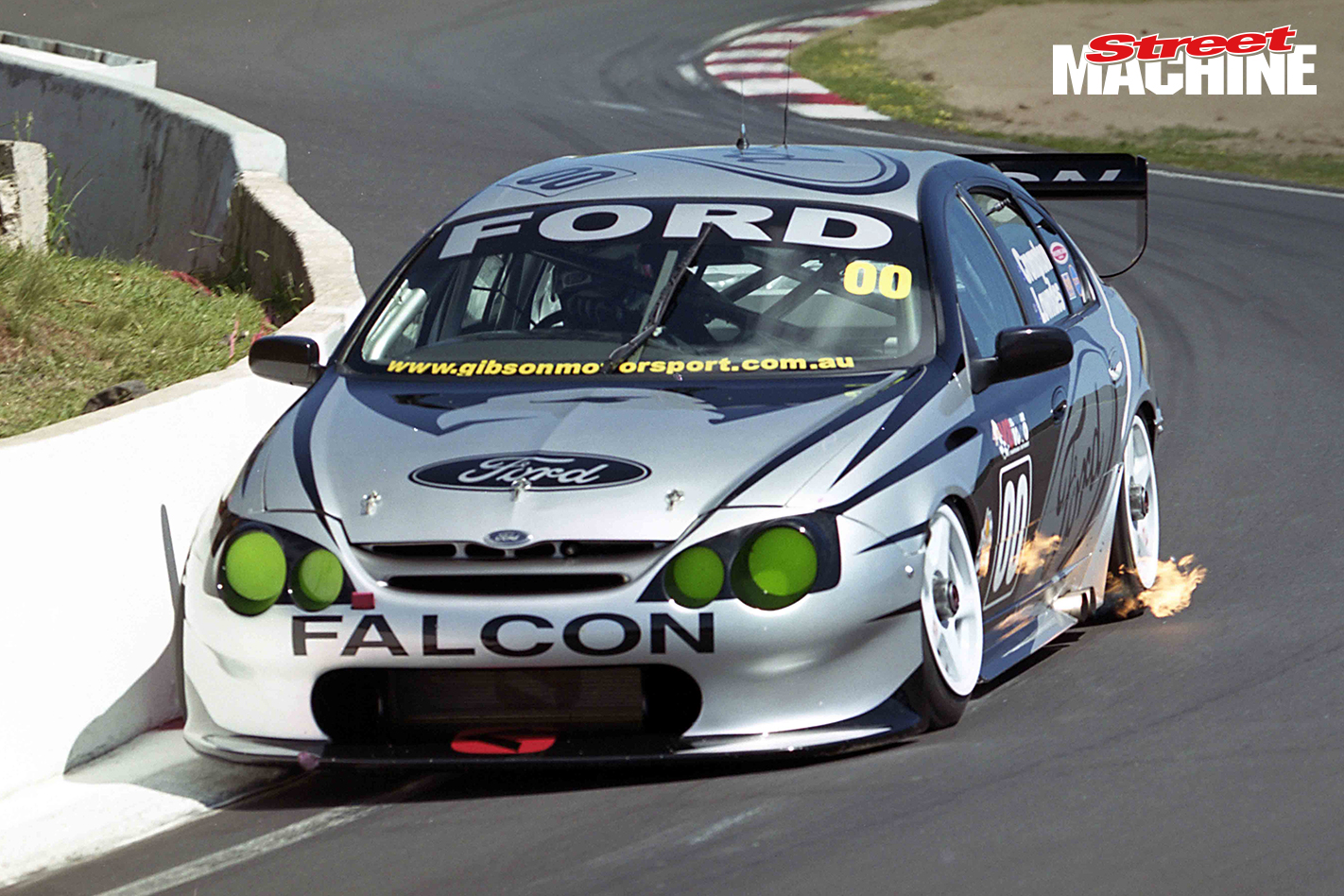 THE AU was one of the unluckiest race cars to wear a Falcon badge, particularly at Bathurst. In the four years they competed at Mount Panorama, AU Falcons were in winning positions several times only to lose them due to bizarre incidents. This is Gibson Motor Sport’s famous ‘green-eyed monster’ driven by Craig Lowndes and Neil Crompton in the 2001 race. Lowndes lost control on a damp track and buried it in a tyre wall while leading. The time taken to recover the car cost them a shot at victory. 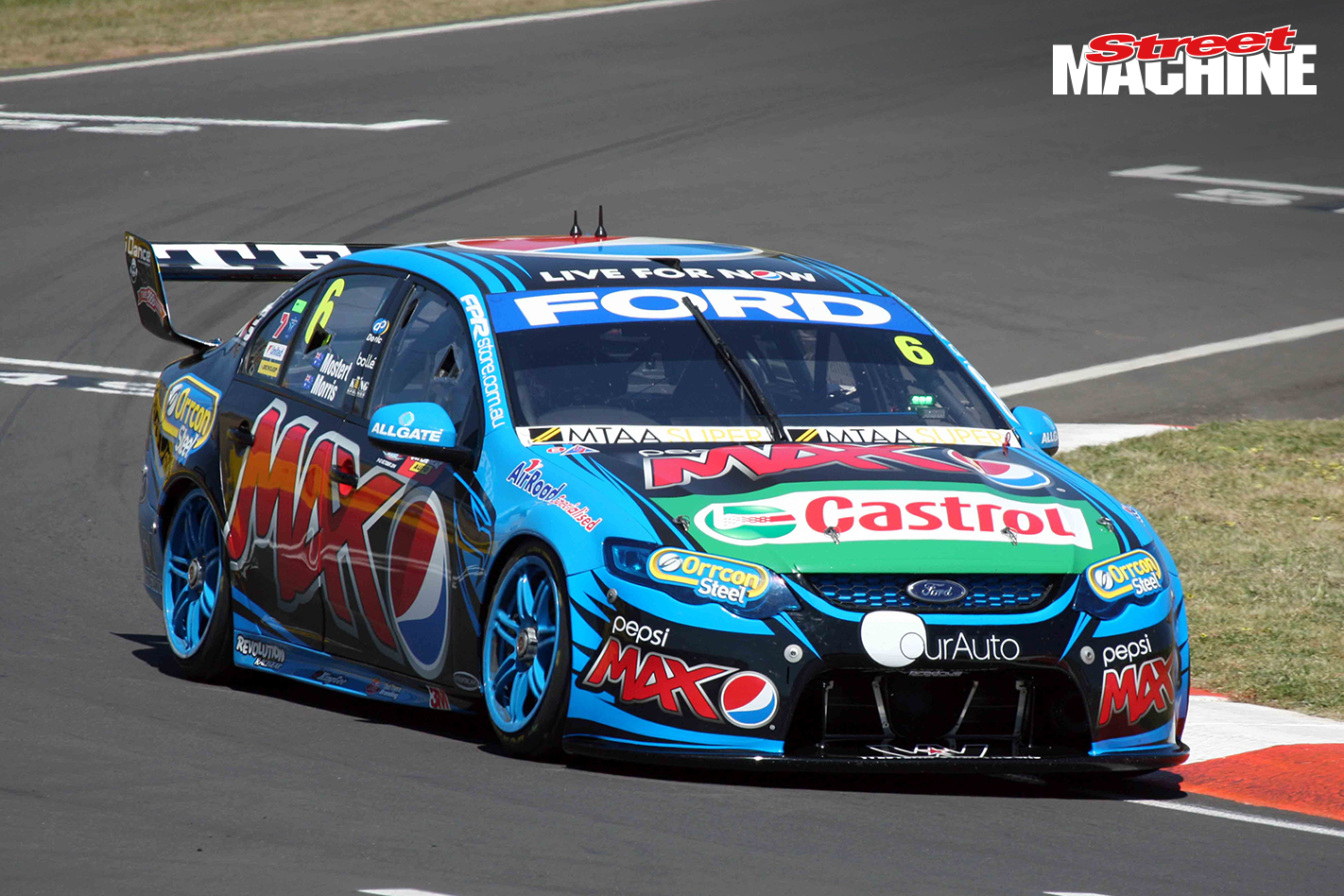 NEW CAR of the Future (COTF) technical rules in 2013 meant that only the body panels of the showroom FG Falcon remained, attached to a new ‘control’ chassis and trans-axle IRS common to every car. Ford Performance Racing’s FG Falcon driven by Chas Mostert and Paul Morris scored a thrilling Bathurst win in 2014. 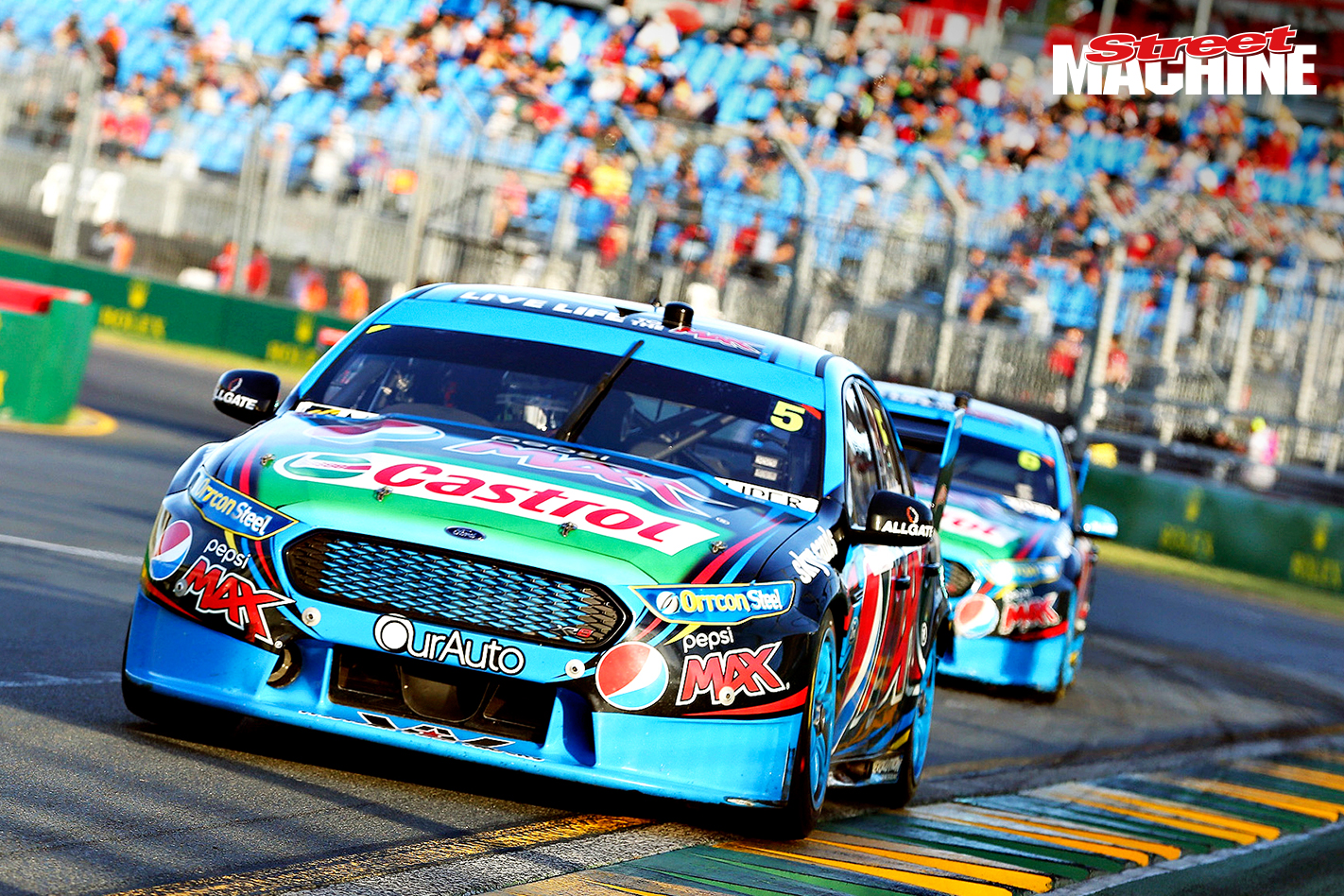 APART from the Group A years (1985-1992), the local Falcon has served as Ford Australia’s primary tin-top racer since the first XK model in 1960.  The end of that long bloodline is today’s FG X, which is one tough-looking race car. Once it departs the scene, Australian motor sport will never be the same again.