GARTH Bell has held a lifelong passion for early 60s Factory Experimental Funny Cars so he decided to build his own. But he had very specific goals; It had to be street registered, yet capable of being raced, and he didn't want to be bound by a rigid recreation of a 40 year old car.

He began looking for a suitable vehicle to fulfil his dreams, and found it in a somewhat worn ‘69 Dodge Dart, which had been fabricated by second generation Sydney hot rodder Grant Williams who had converted a VG Valiant coupe with parts from a long expired Dart. The car was street registered and Garth kept it on the road for a year before he girded his loins and began the long process of creating a street-driven Funny Car.

The basic body/chassis went first to Andrews Race Cars, and had the chassis tricked, a surprising amount of rust removed and replaced with structural reinforcing, and a full eight-point cage. The cage comes complete with a removable taxi bar behind the front seats, and a removable side intrusion bar. 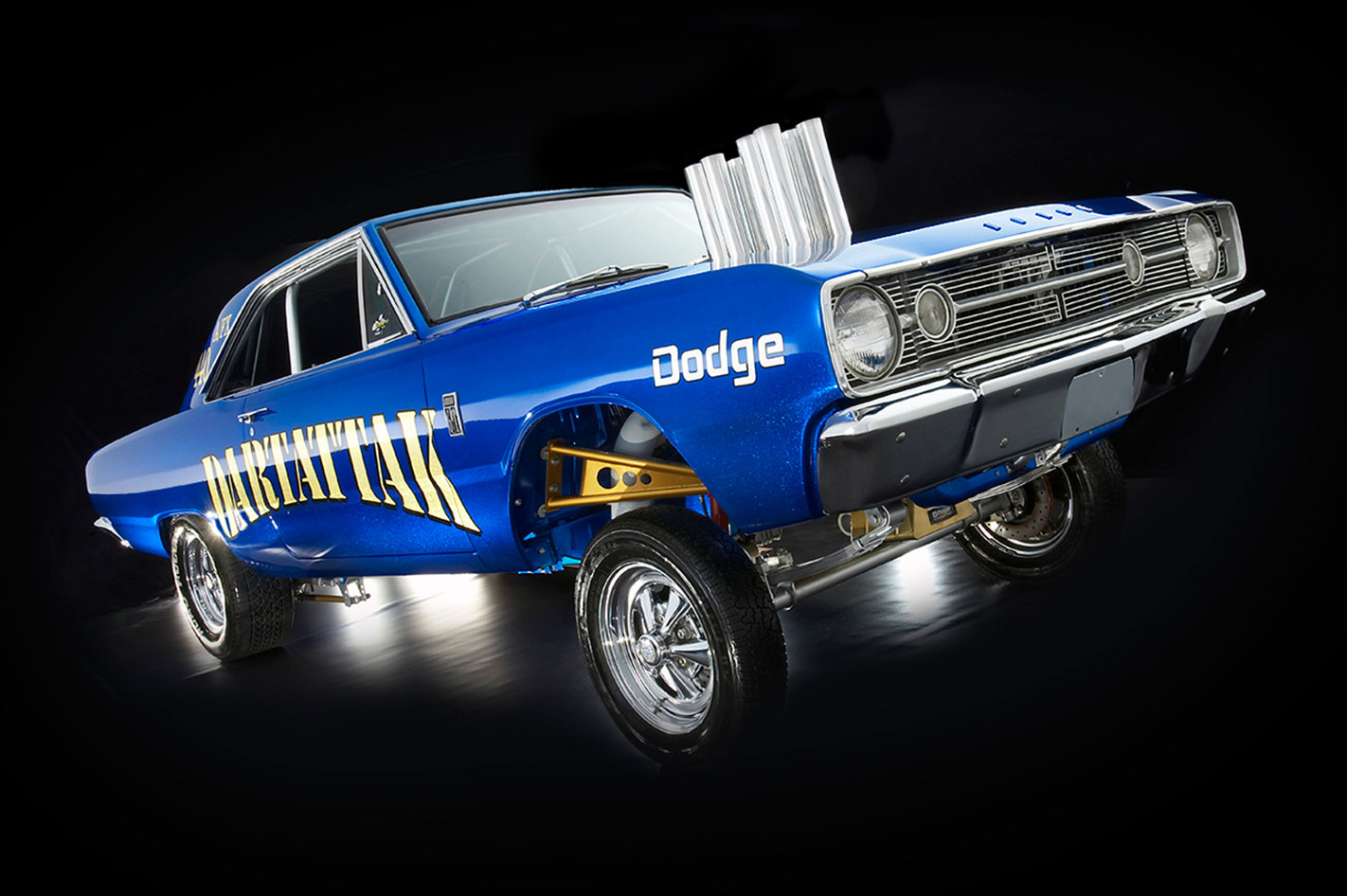 Original plans to move the wheelbase positions, in line with original A/FX style had to be abandoned to meet registration requirements. The 9-inch Ford rear is a full Mark Williams unit, with spool, locker and 4.11 gears. It was hung on the original Valiant leaf springs, aided by Pedders 4WD shocks and a caltrac set-up, designed and built by Andrews, which enables the preloading of the springs for improved off-the-line performance.

The front end uses Land Rover leaf springs and Pedders shocks bolted to a custom-built tube axle using repro ‘39 stainless stub axles. The tube axle deal was the drag racers’ answer to the handling problems they began to experience with mid-60s Funny Cars as they pushed these lightened and stock bodied vehicles through 150 mph on stock front ends. On Garth’s Dart it gives the front a 3in lift for that reverse raked look. 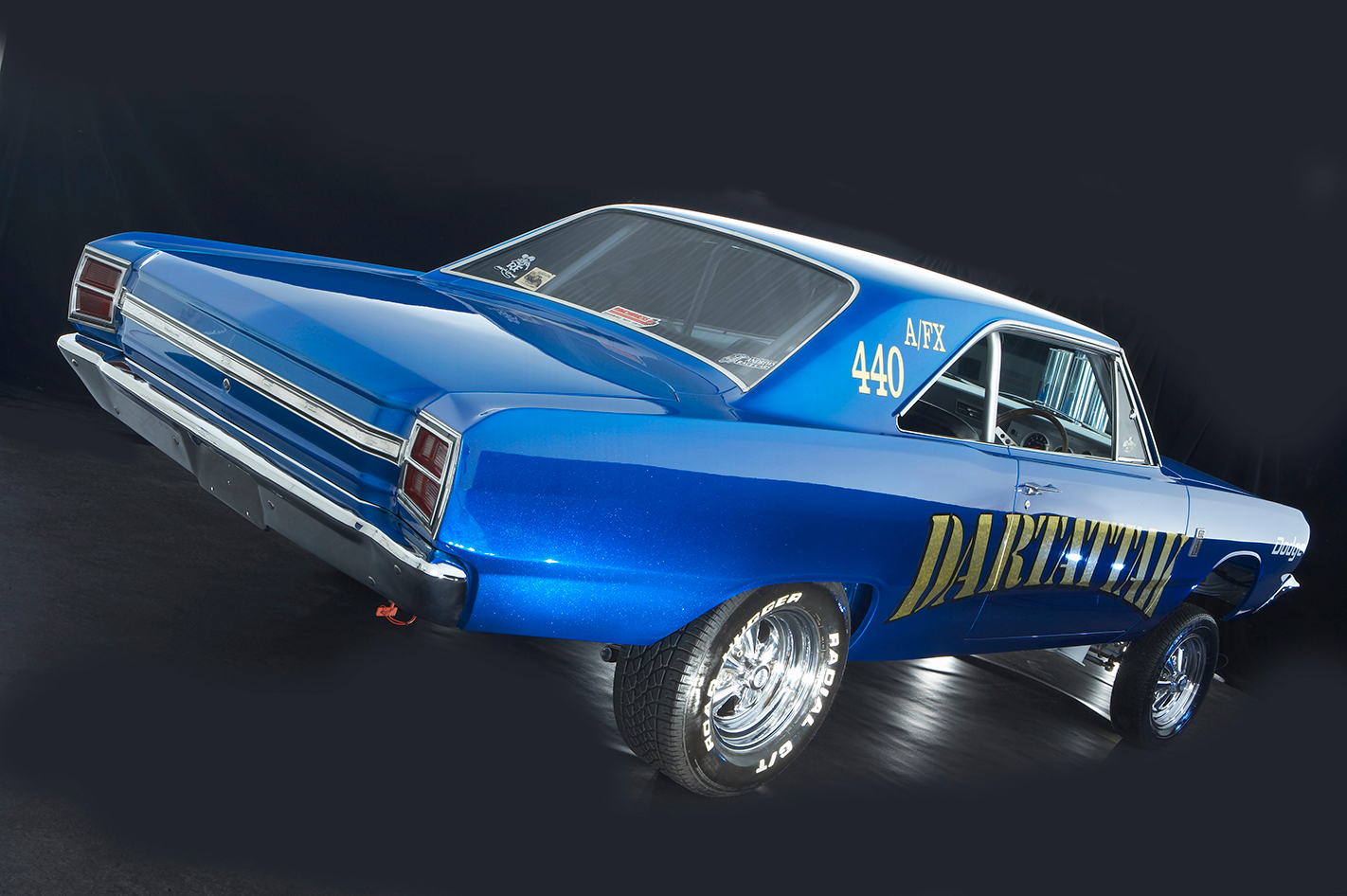 The engine Garth had put together is based on a venerable 383 Chrysler, with a 440 Chrysler steel crank, for a total of 451 cubes. It is closely based on an engine design which appeared in a Hot Rod magazine article. Hot Rod claimed that the Chrysler gave the best torque per cubic inch for the least money. The magazine version produced 550 ft/lb of torque and 525 horsepower, though at a relatively low 5200 rpm. Garth figures he’s got around those figures from the engine he had built by Jeff Hislop, and in the heavy 4000 lb Dart that ought to give him around mid to high 11-second times.

The most notable feature of the wedge Mopar is the Kinsler stack injection, sticking way up above the bonnet line in line with 60s A/FX style. This took a lot of tracking down, and was eventually purchased over eBay from a US speedway racer. Finding a Chrysler version proved impossible, and the unit in use is actually a small block Chev, which fits port alignment-wise, but took an adaptor plate, made by Jeff Ramsay, to marry it to the heads. A set of Factory Experimental type headers exit down towards the ground behind the front wheels, with side extensions for fitting up to a streetable exhaust system.

“If I ever built another I’d use ‘glass bonnet, boot lid and doors to keep the weight down,” said Garth. “Of course, next time it would only take about three months and be an awful lot cheaper.” 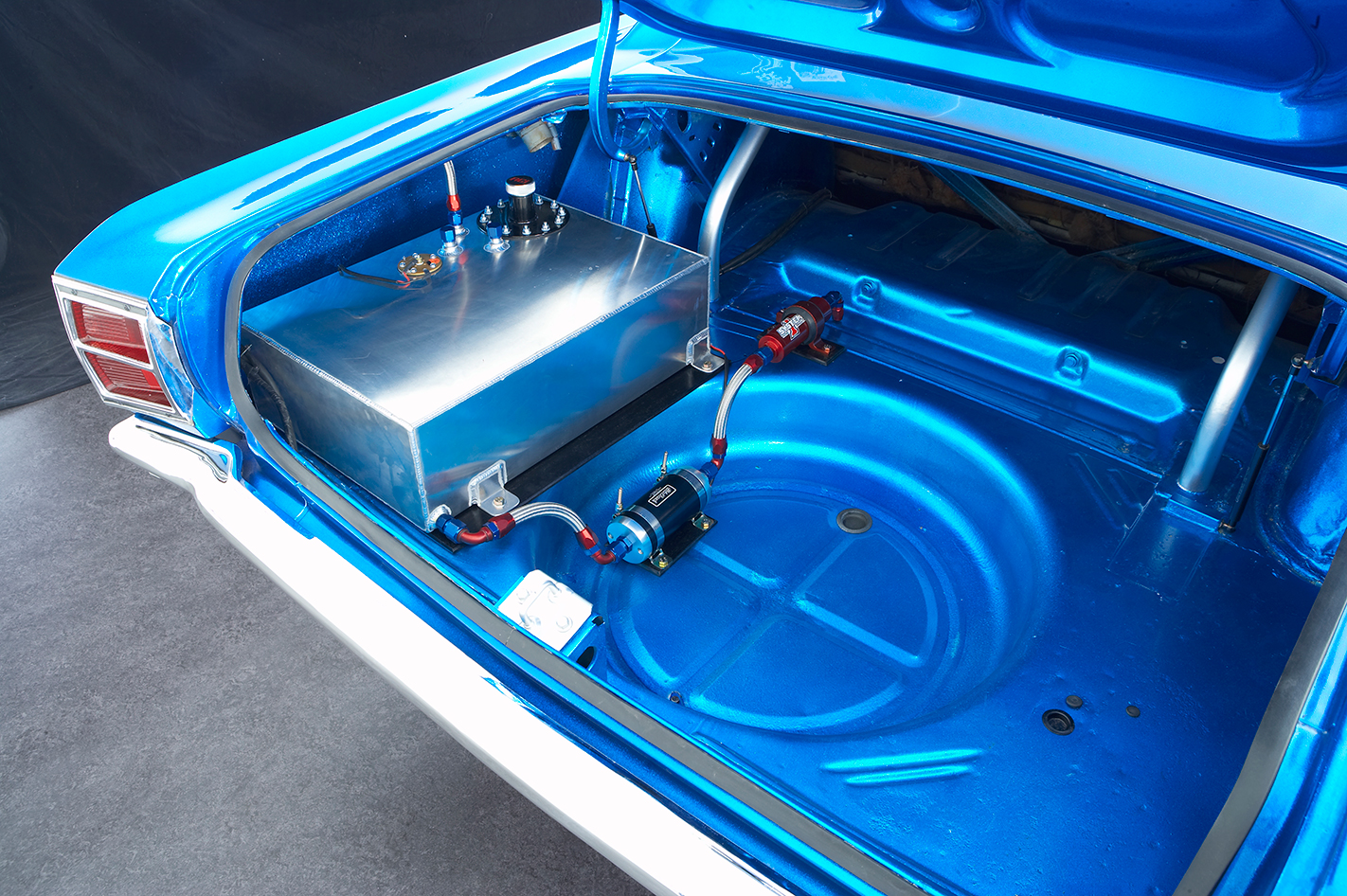 The old Valiant was pretty rugged when first acquired but is now finished in a custom mixed Spray Chief metalflake blue applied by Bonnyrigg Smash, who invested close to a year in the project removing bog and replacing it with metal and doing much of the final assembly. The paint is set off by gold leaf graphics by Joe Webb of Bad Image Graphics and some original 60s decals that were on the Dart’s windows when imported from the States. Garth wanted that coarse 60s style metalflake, but simply couldn’t find it and had to settle for what he could dig up.

The car rolls on genuine Cragar S/S rims, 5-inch at the front and 9-inch at the rear. The rear rubber should do okay, but the 165.15/70s at the front will have a tough life, with plenty of toe-in and camber to keep it all tracking happily forward, but at only $69 apiece that is no major burden. 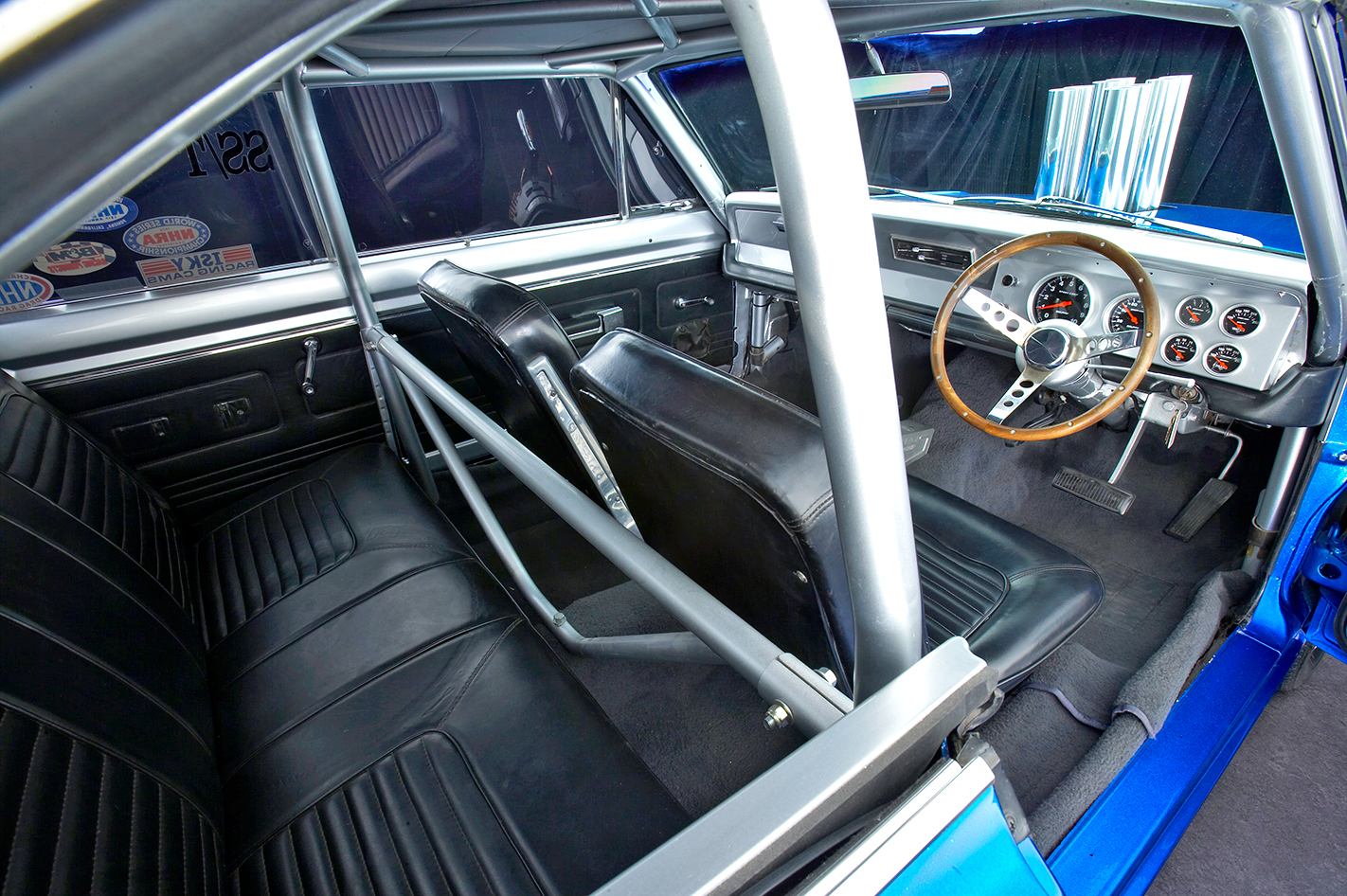 “I’ve always loved these cars,” Garth told us. “They’re the coolest cars ever. In some ways my version won’t make some fanatics too happy, as it was never intended as a restoration. It’s my interpretation of what this car should be. I always wanted it to be street driven, so that means things like engine management, instead of mechanical fuel injection, resettable fuses and all those little things that make for a comfortable drive on the road.”

Garth is also of the opinion that what he has built is more of a hot rod than a street machine: “There was the grand plan of what I wanted it to look like, but there was no simple formula. Tom Bugeja, my mechanic – I couldn’t have done this without him - and I had hours of hard work simply to work out what parts we needed in all manner of areas. There was a lot of ringing around, and I found much of what I needed on eBay.

“The biggest hurdle was the intention to make it fully street registrable. There was all the formal paperwork, and hours of work trying to build around the regulations. It cost an awful lot more money and took a lot more time, but I think it was worth it. Basically it was designed to have fun.” 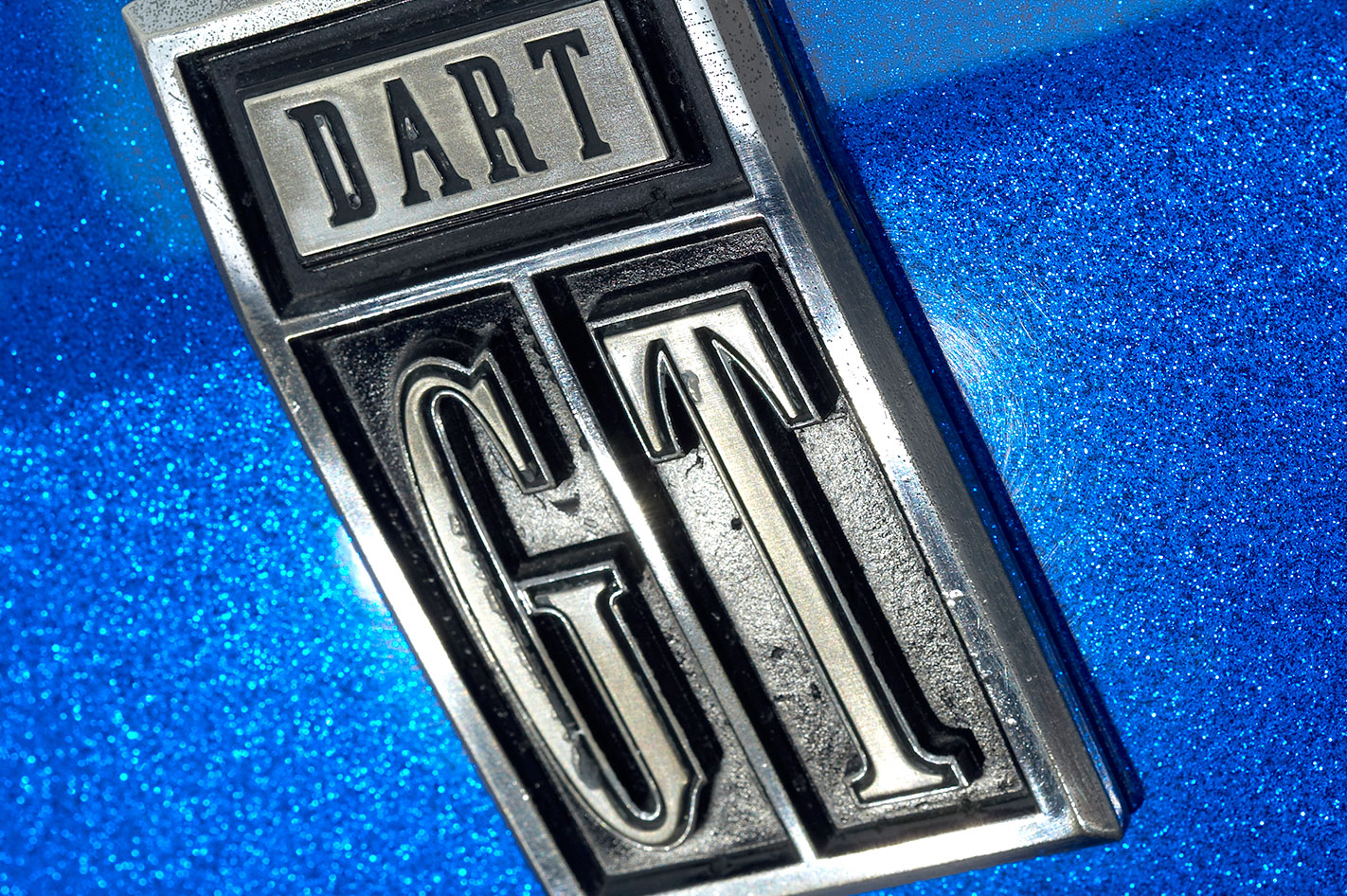 WHERE IS IT NOW?

After we featured the car back in SM March 2007, Garth decided to add a 6/71 supercharger and a trick EFI system before selling the car off to his good mate Ivan. “He’s gone right through it and made it more a show car than when I had it,” Garth says. We gave Ivan a call and he’s told us the car has a whole new interior now and is getting a few updates soon with different wheels and a Haltech dash on the to-do list. We’ll let you know when it’s finished. 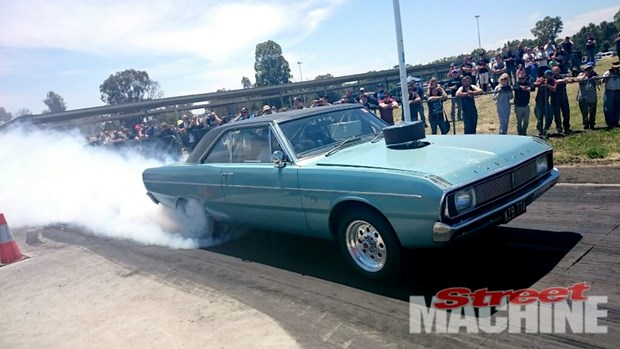 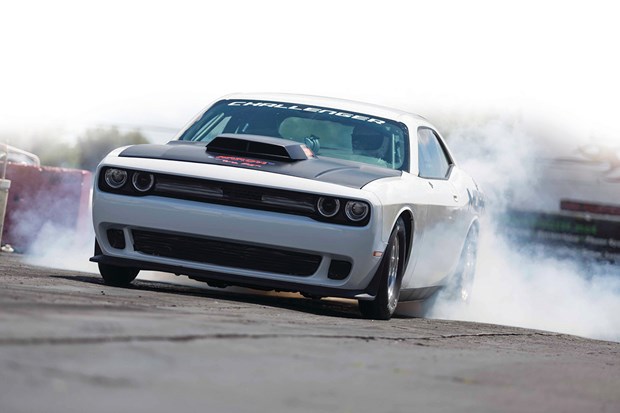 Did the Dodge Challenger Hellcat SRT have you drooling all over your keyboard? Well Dodge has upped the ante again revealing a turn-key racer called the Mopar Challenger Drag Pak 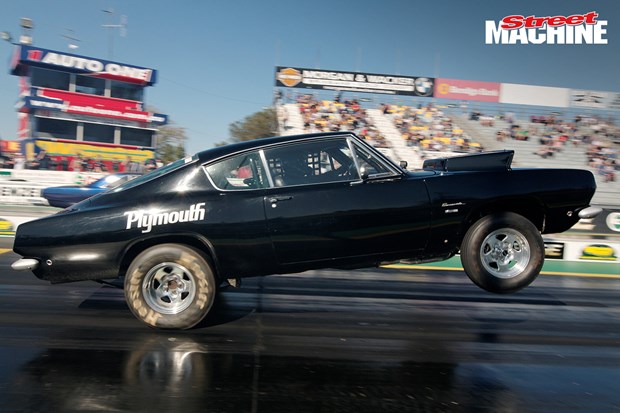 Mopar Sunday is on this weekend, so here's a gallery of shots from the archives to whet your appetite 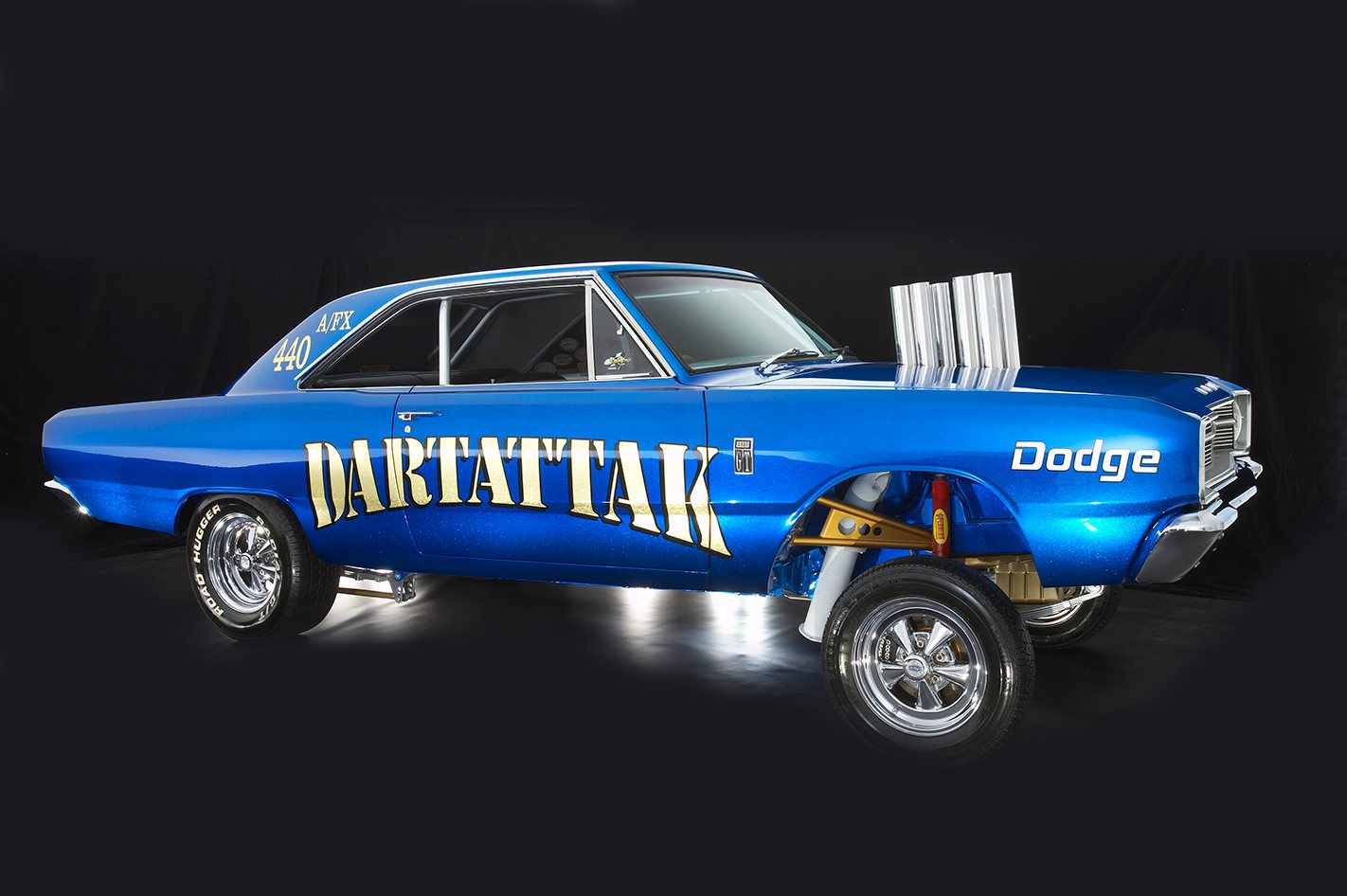 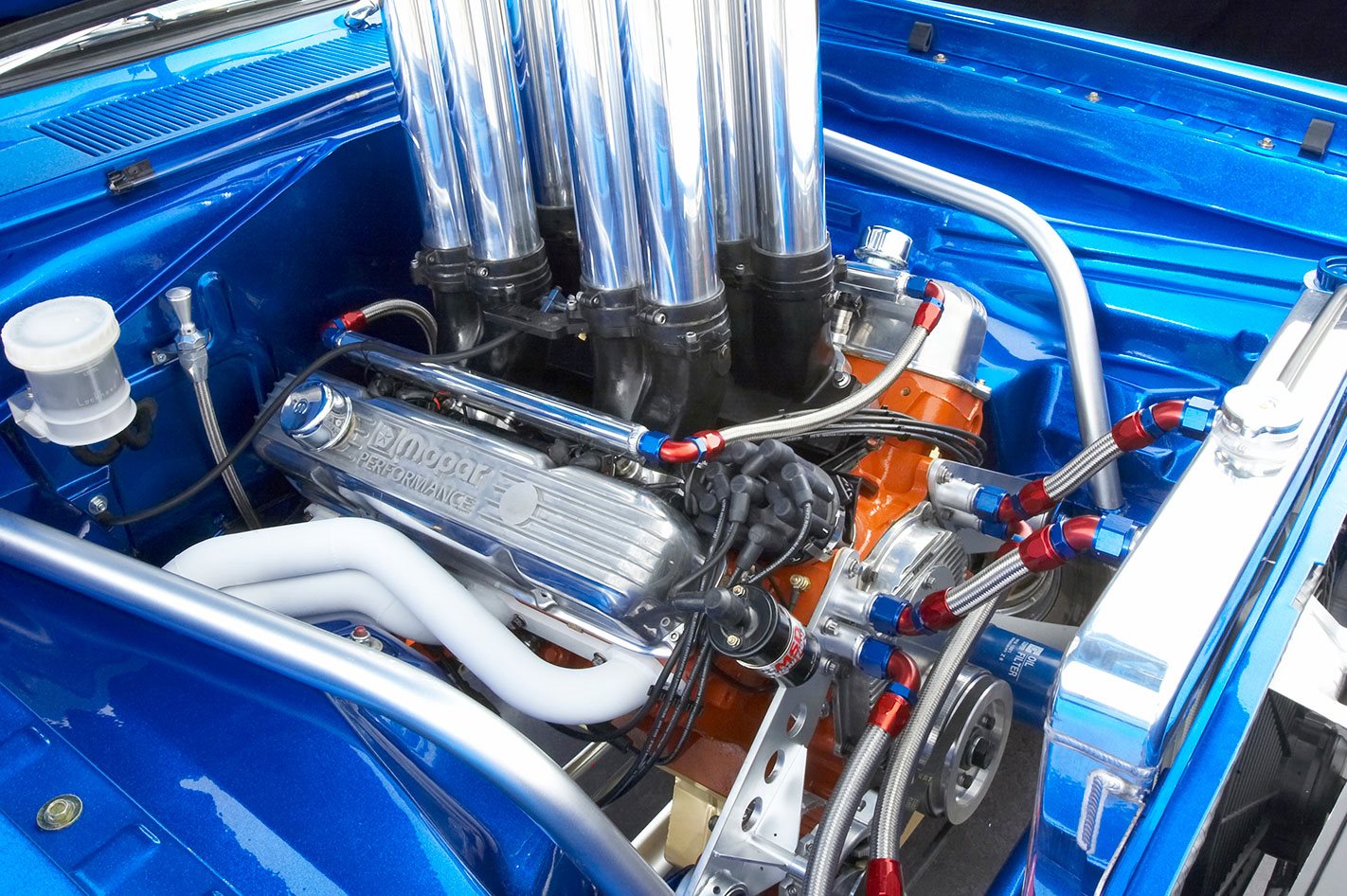 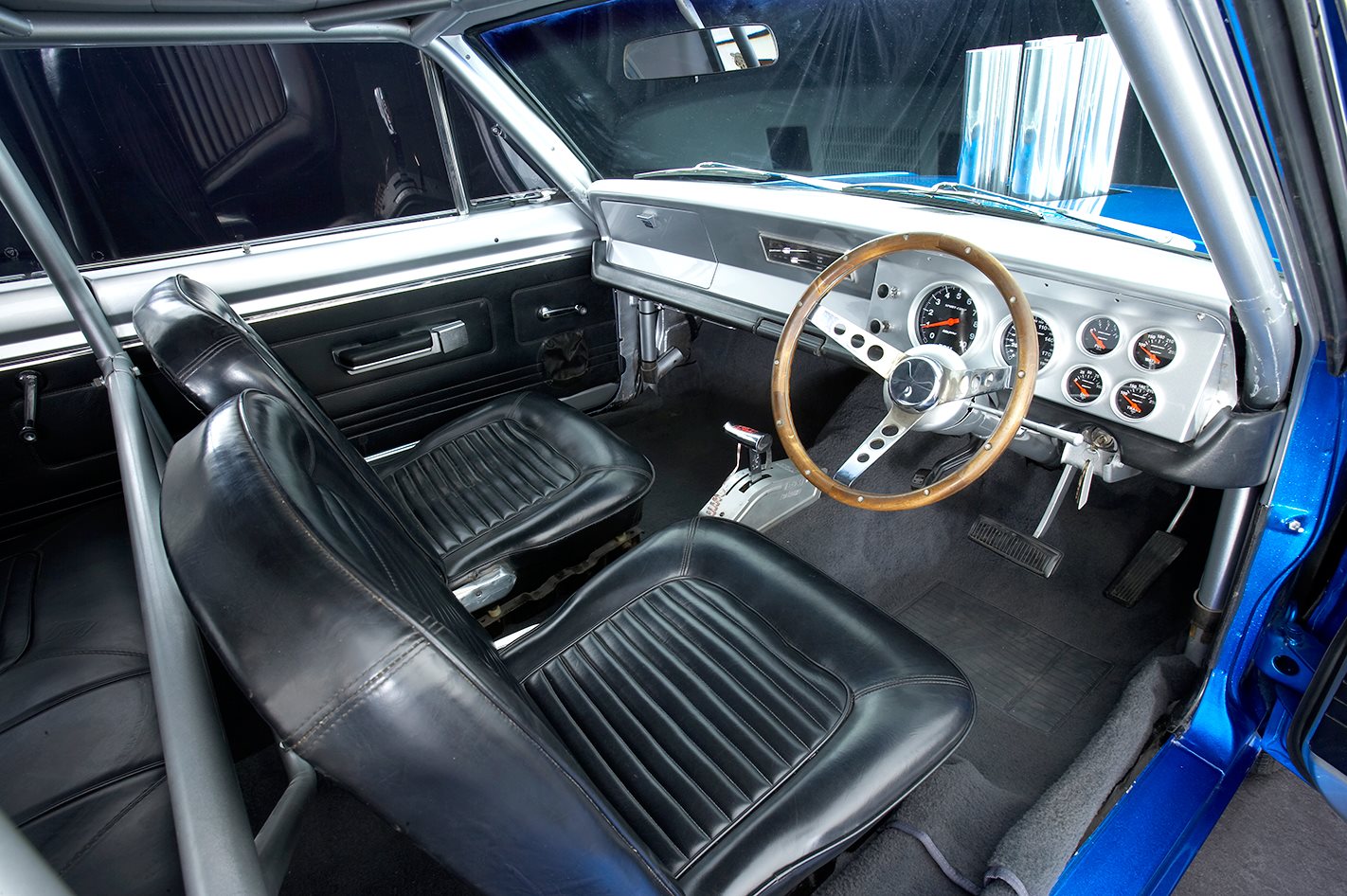 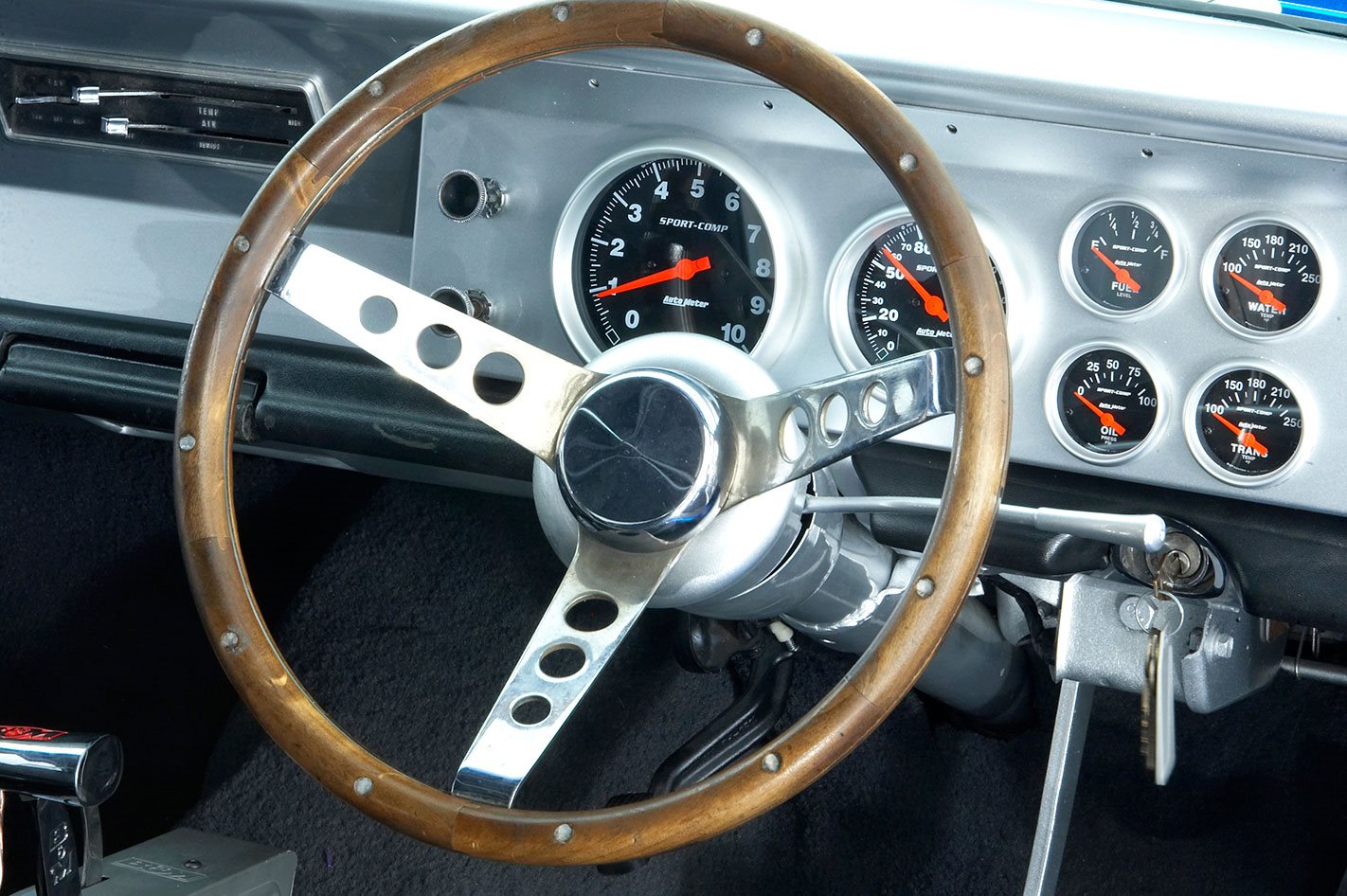 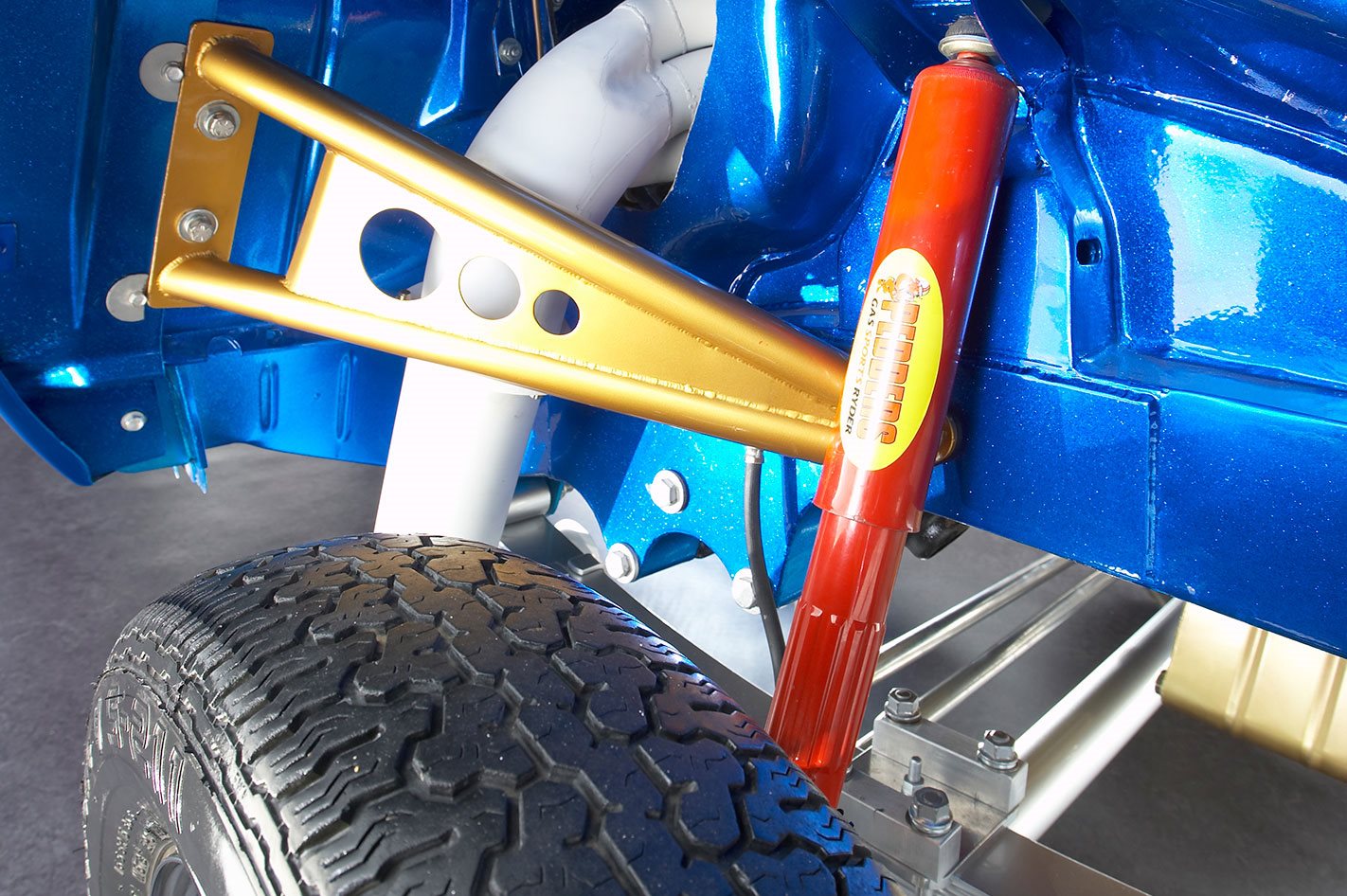 1 / 5 Despite its crazy looks the Dart was fully engineered and street legal. Garth even drove the car from Sydney to Canberra and back for Summernats 21