When it comes to tough Fords, few names are better known or more respected than Gary Myers

Gary Myers made a career out of frying tyres, and in recent years he’s also turned out a couple of show-worthy beasts as well, namely Silver Bullet and XAcuter.

With Silver Bullet sold, some big-paying burnout wins under his belt and a spare donk ready and waiting, Gary decided the time was right to build something else with his youngest son, Jake.

“After we won Burnout Masters and UBC, we had a bit of money floating around,” he says. “I jumped on the ’net and we bought this Mustang out of a car yard in the US.”

Building a late-model car meant it wasn’t full of rust and he was able to buy parts straight off the shelf — no late nights trawling the ’net for that perfect set of indicators.

Getting it back to Australia was a little harder, though. The Powers That Be don’t like us importing late-model muscle so with no desire to register his new ride, Gary imported it as a wreck.

“The motor, gearbox, diff and struts had to be removed from the car to bring it in as a wreck, and they couldn’t come back in the same container,” he explains. “John Taverna Sr got a few guys over there to pull it apart and then he shipped it all over.”

With the ‘wreck’ landed, they moved it straight over to Jeff ‘Rodie’ Draper at Rodent Restorations for a four-link rear end, fuel cell and a set of tubs. Gary knows what kind of damage burst tyres can do, so they built it all out of heavy gauge materials.

After Rodie had done his bit, Gary and Jake fitted the front end to get the car rolling, stripped out the trim and took it to Stuart Vale at Racers’ Choice for a full rollcage, ancillary tanks (header and breather) and a custom exhaust. Stu and his boys went all-out on the headers, with 2¼in primaries feeding back to four-inch collectors and a twin four-inch system with an X-pipe and custom mufflers. It’s a bloody work of art! 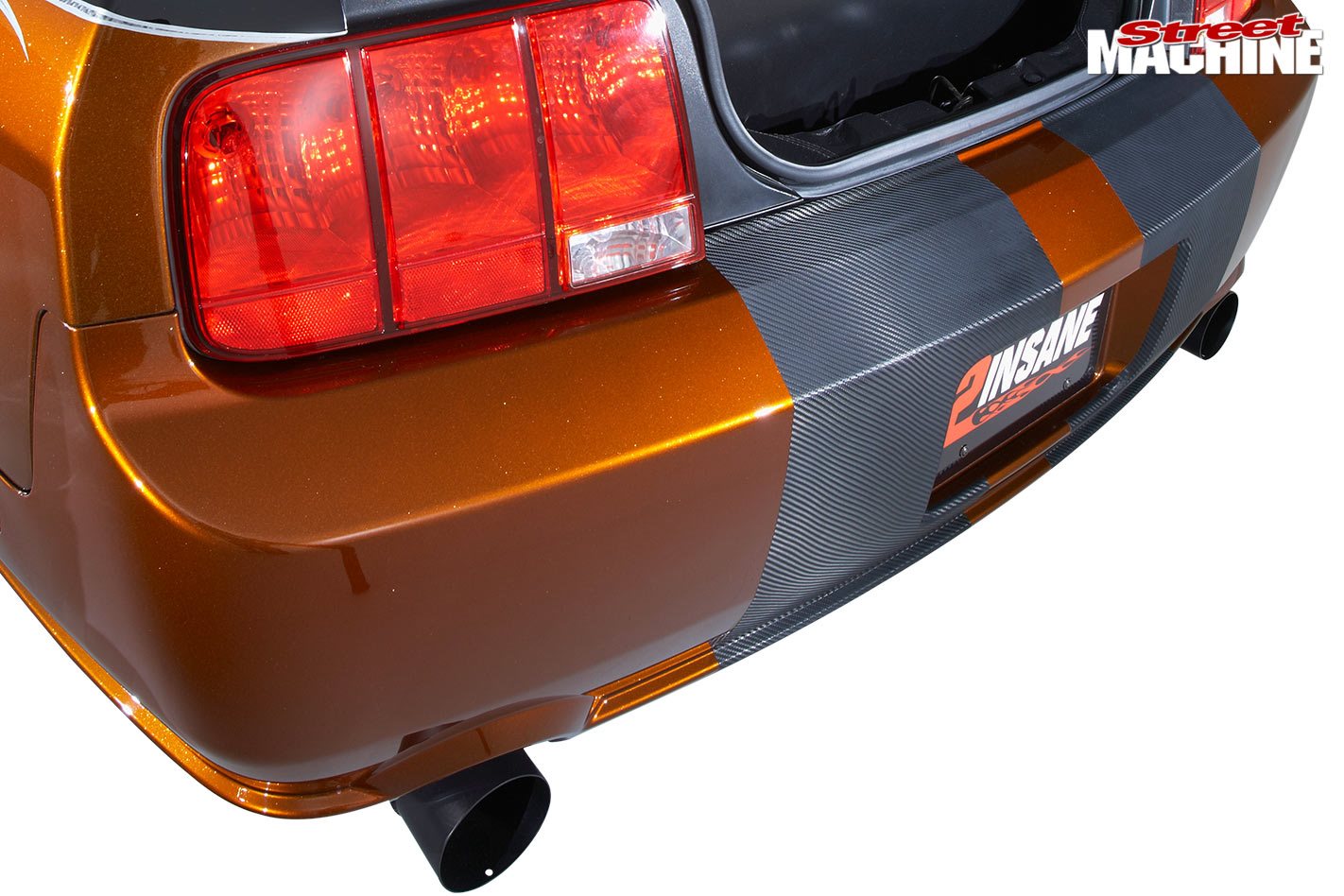 Twin 4in pipes exit the rear, while a 78-litre fuel cell supplies methanol up front. Gary says the benefit of starting with a new car is having no body or rust repairs to do

The stock 4.6-litre quad cam was stuck under a bench and Gary went with what he knows best; the faithful old 302 Windsor. But this dry-sumped combo is a bit wilder than he’s used in the past.

“The running gear in this car was going to go in XAcuter but I wouldn’t have been able to drive it and I really wanted to keep the XA as a street car.”

Starting with a World Products 8.2in deck, four-bolt Man O’ War block, Gary filled it with a Callies crank, Oliver rods and CP pistons. Up top he went for a pair of Man O’ War 10-degree alloy heads.

Watch next: Jake Myers's SICKO Mustang on the dyno 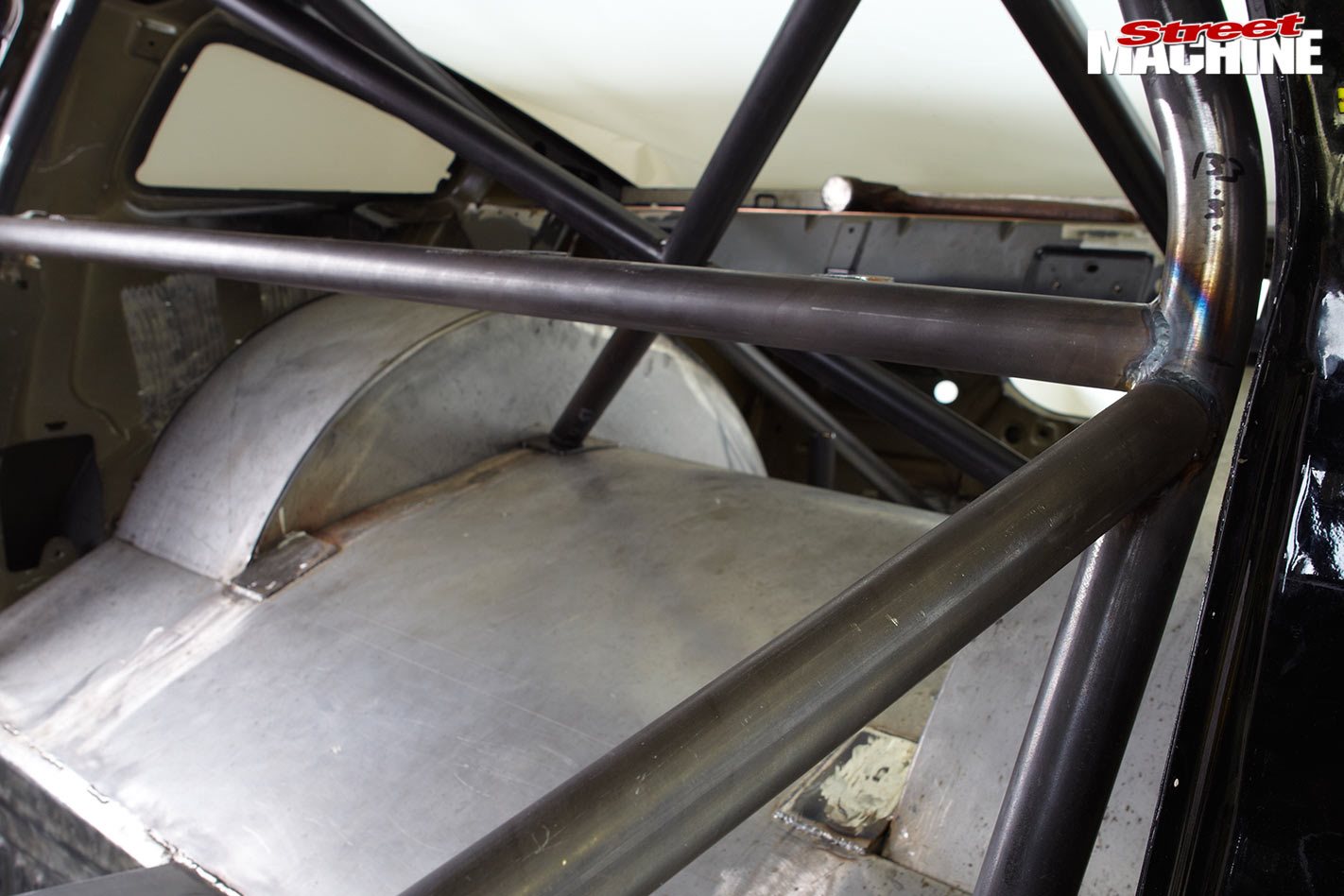 “They’re not popular here, so we had to fabricate the intake manifold and extractors. You can’t buy anything off the shelf for them. They’re a really oddball thing.”

Mick’s Metal Craft fashioned an intake manifold to suit the Littlefield 6/71 blower, which will be spinning like crazy, exactly as Gary wants it: “Everyone says I should fit an 8/71 but I want it to work hard. I want it screaming its head off.”

The new Mustang will do the occasional burnout demo, so they want it to sound awesome — something like George Separovich’s old NUTTR Monaro from Perth. 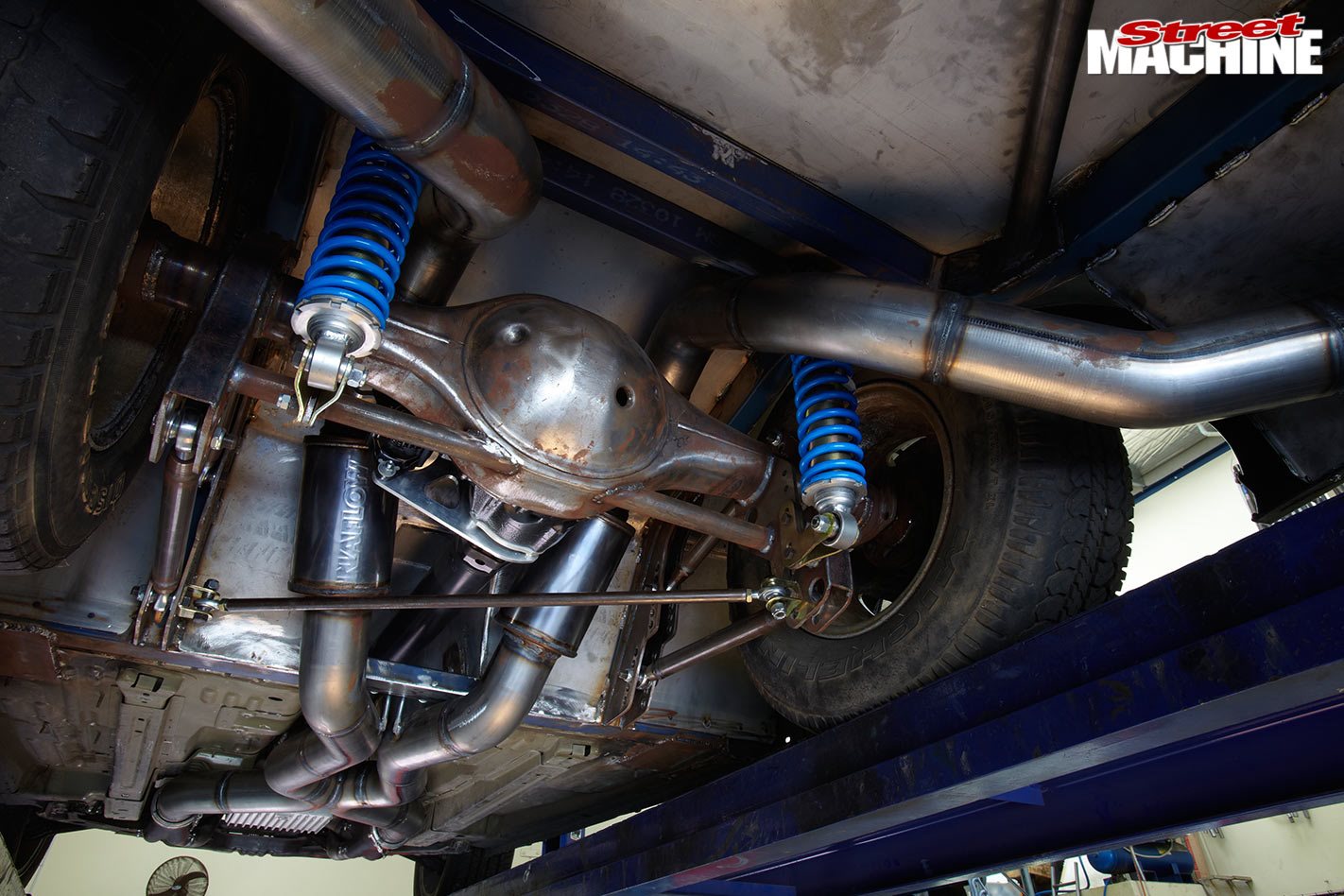 “George is doing my tune. He gave me a list of what he wanted in the engine, and for him to do the tune-up everything had to be what he suggested.

Backing up the mega-horsepower mill is a 2000hp-capable Powerglide from Mike’s Transmissions in the US. It was built using a Reid aftermarket case and all the good gear.

The tailshaft is custom, as is the narrowed nine-inch which runs a Strange nodular iron centre and custom 40-spline axles.That’s pretty well bulletproof. 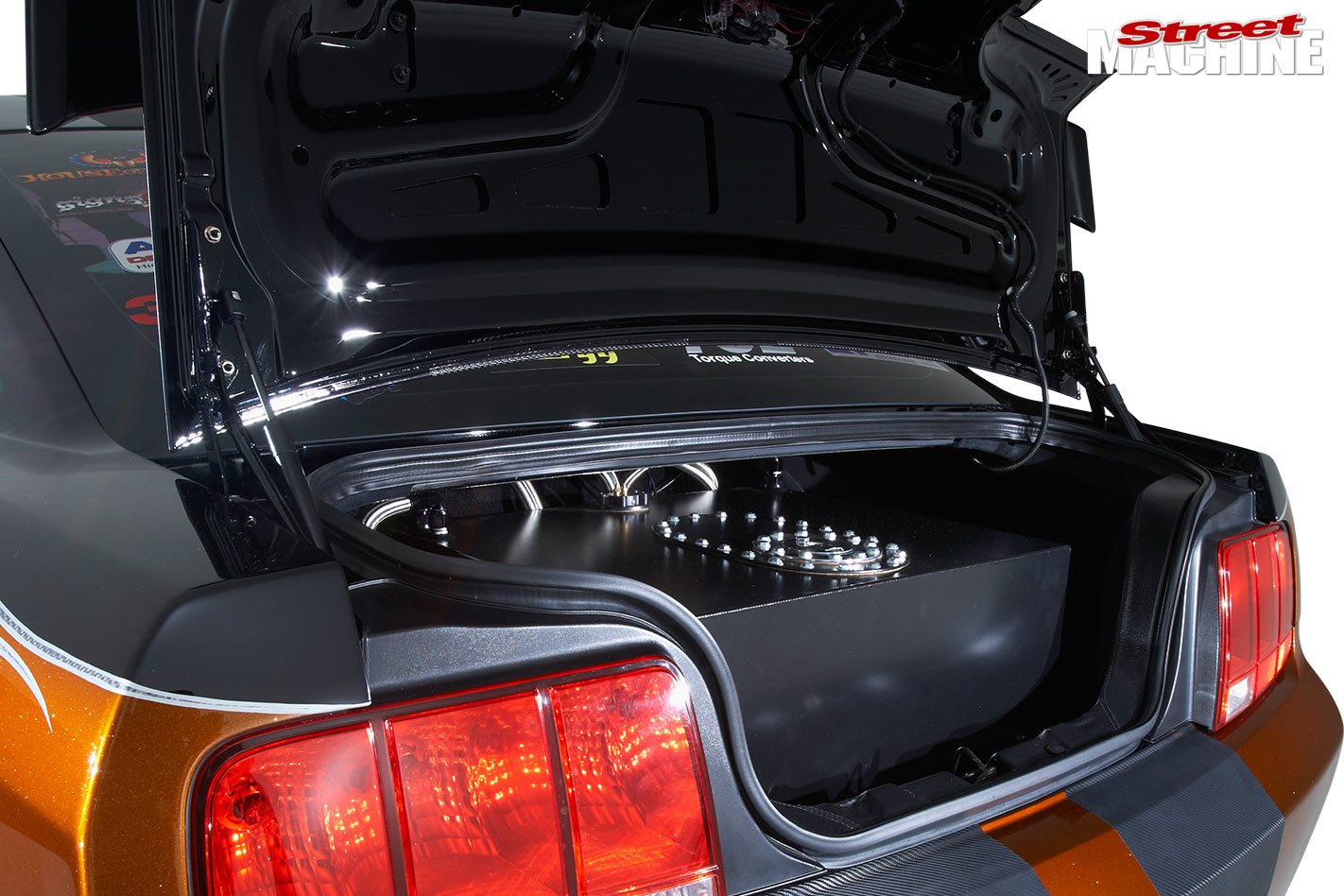 By contrast with the monster donk, the body is surprisingly stock, with just deleted mirrors, aerial and fuel door, and a hole cut in the bonnet.

Gary says cutting that hole was a pain because the bonnet’s aluminium but with help from his good mate Jarrod Wood they managed to get it done.

The shell then went to Batkin and Damme in Wagga Wagga for paint. The car was originally black and they stayed with that for the top, albeit recoated in HOK Black, with Pagan Gold and a heavy dose of flake over the lower half. Dan from Signs Plus finished the paint with silver flames splitting the black and gold. 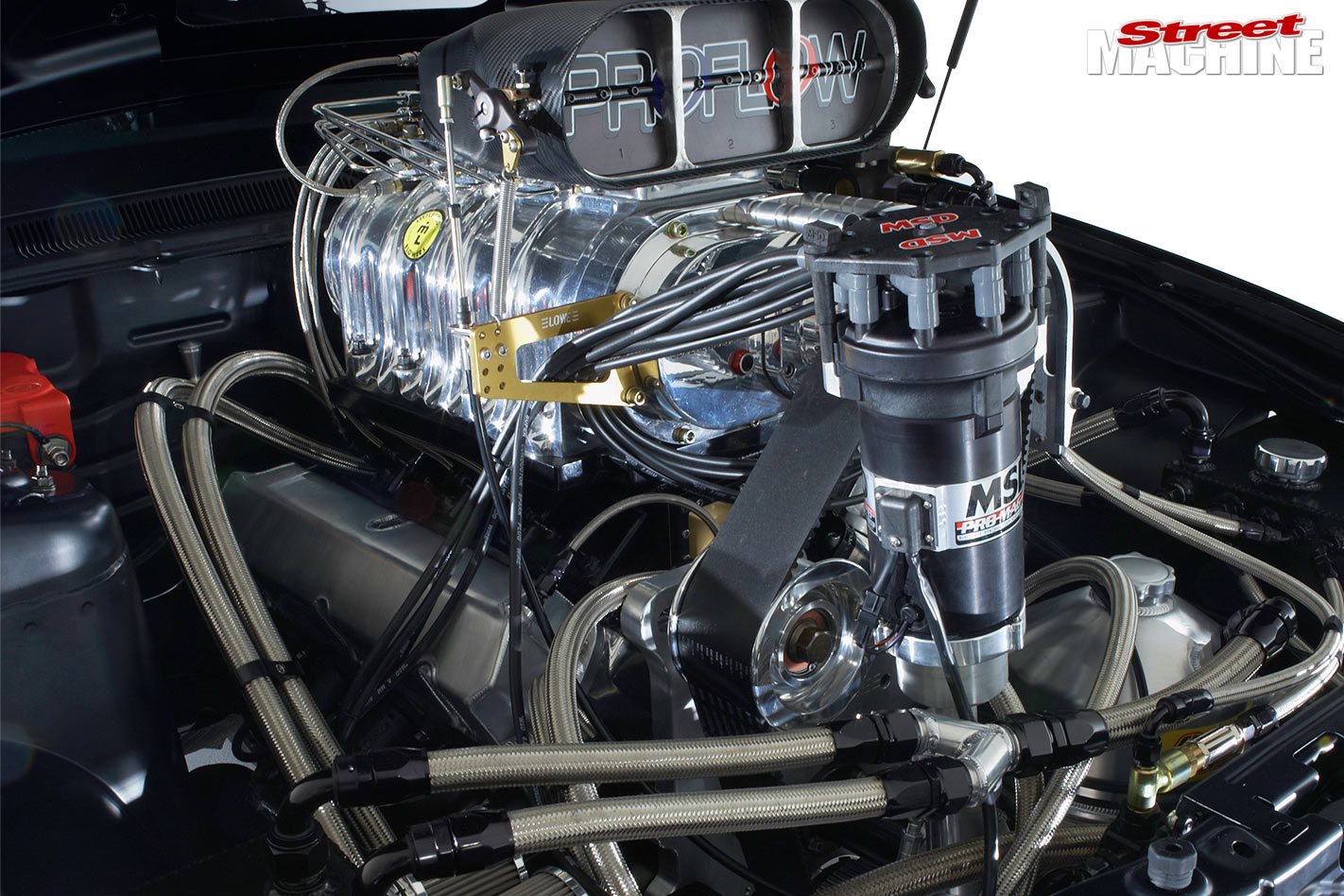 Check out that 20amp magneto sitting up front. With a dry sump, mechanical fuel pump, mag drive and crank support, things are mighty busy up front — but this is no show pony, it’s a workhorse

Dual carbon-fibre GT stripes were laid over the length of the car by Matt at Vinyl Wraps. He also added vinyl to the injector hat, interior details and intrusion bars.

To keep it rolling, Gary chose Intro Magnum wheels measuring up at 20in all ’round — 8½in up front and 15 inches wide on the rear. Clearance issues meant that the backs of the front wheels needed machining to clear the massive brakes: “We had to find out from Intro how much we could remove from the wheels without weakening them.”

It’s been a hell of a thrash. In January the car was a shell and bare block but with help from people all around the country, they debuted it at MotorEx in July. 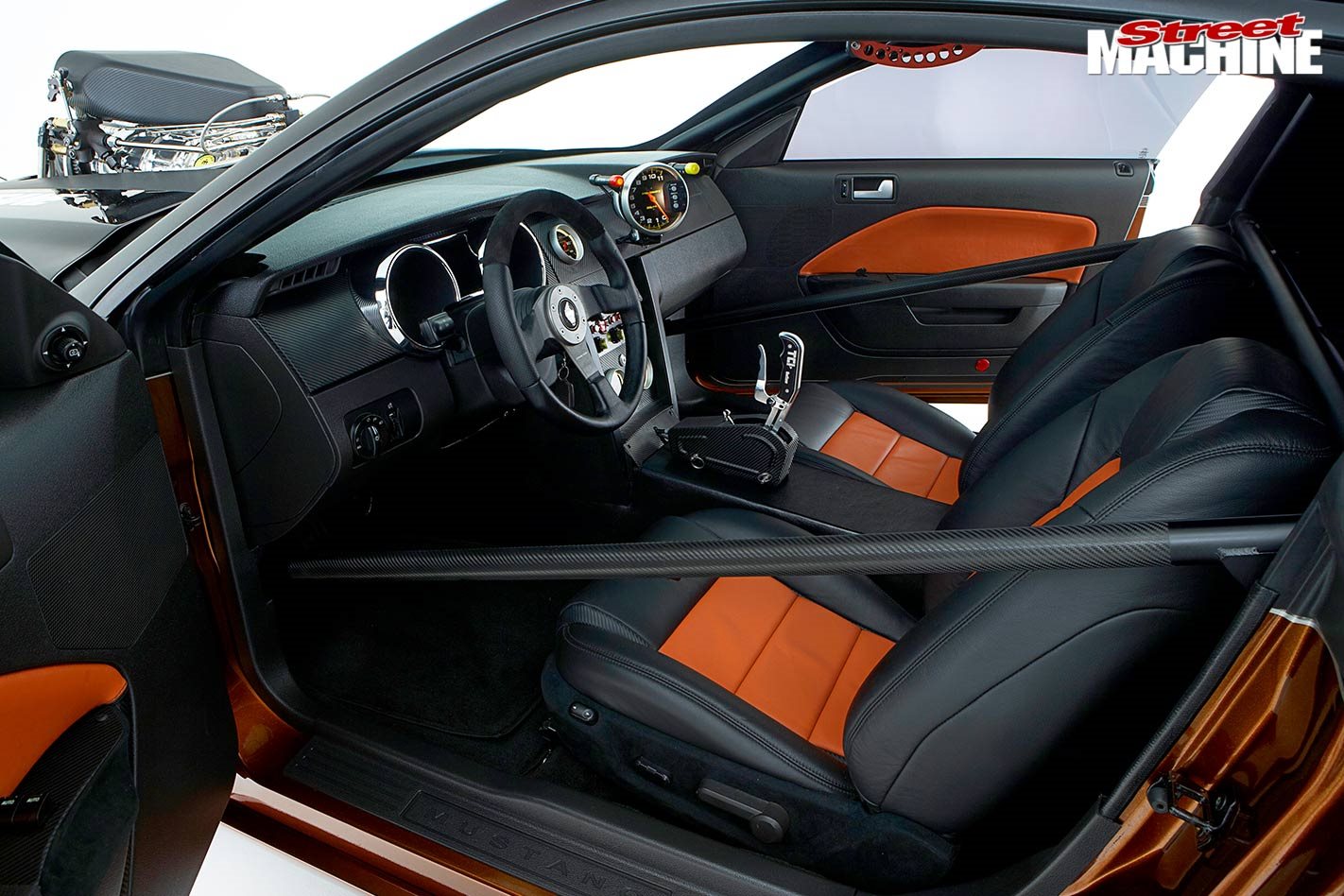 Elite Trimming handled the interior, adding orange leather inserts to the door trims and seats. For the salt lake there’s a Kirkey deluxe racing seat waiting in the wings

Since then the MotorActive 2INSANE Mustang has been doing the show circuit in the lead-up to Summernats, where Gary intends to have a crack at Grand Champion.

“We might not score as high as some in the judging but we hope to pick up points in Peoples’ Choice and the driving events,” he says.

But for the entire build, the boys have had their sights set on another goal. And if you’re thinking burnouts, you’re dead wrong.

“We’re building it to DLRA specs and we’re going to run it at Lake Gairdner in 2013. Our ambition is to run 200mph,” Gary says.

He’s been there before in GM176, and knows they’ve still got to add a fire system, data-logger and full-width diff to suit the salt lake wheels. That’ll add at least $10,000 to the final bill.

But imagine 1500hp of blown Mustang screaming across the salt at 200mph. It’ll be a sight and sound to behold and well worth the trip.