I LIKE cars that surprise you when you walk up for a closer look. It might be because of how nicely detailed it is, or the fact that what’s under the bonnet is not what you were expecting, or maybe it’s just something you don’t see that often and you’re happy to see it out and about. Shane Jordan’s ’70 Challenger is all of those things.

Admittedly, I walk up to just about any Mopar muscle car I see; they’re arguably some of the best-looking cars ever built. But a jet black Challenger with a set of 18-inch rims and big rubber tucked under all four corners is definitely something I’ll make a beeline for. 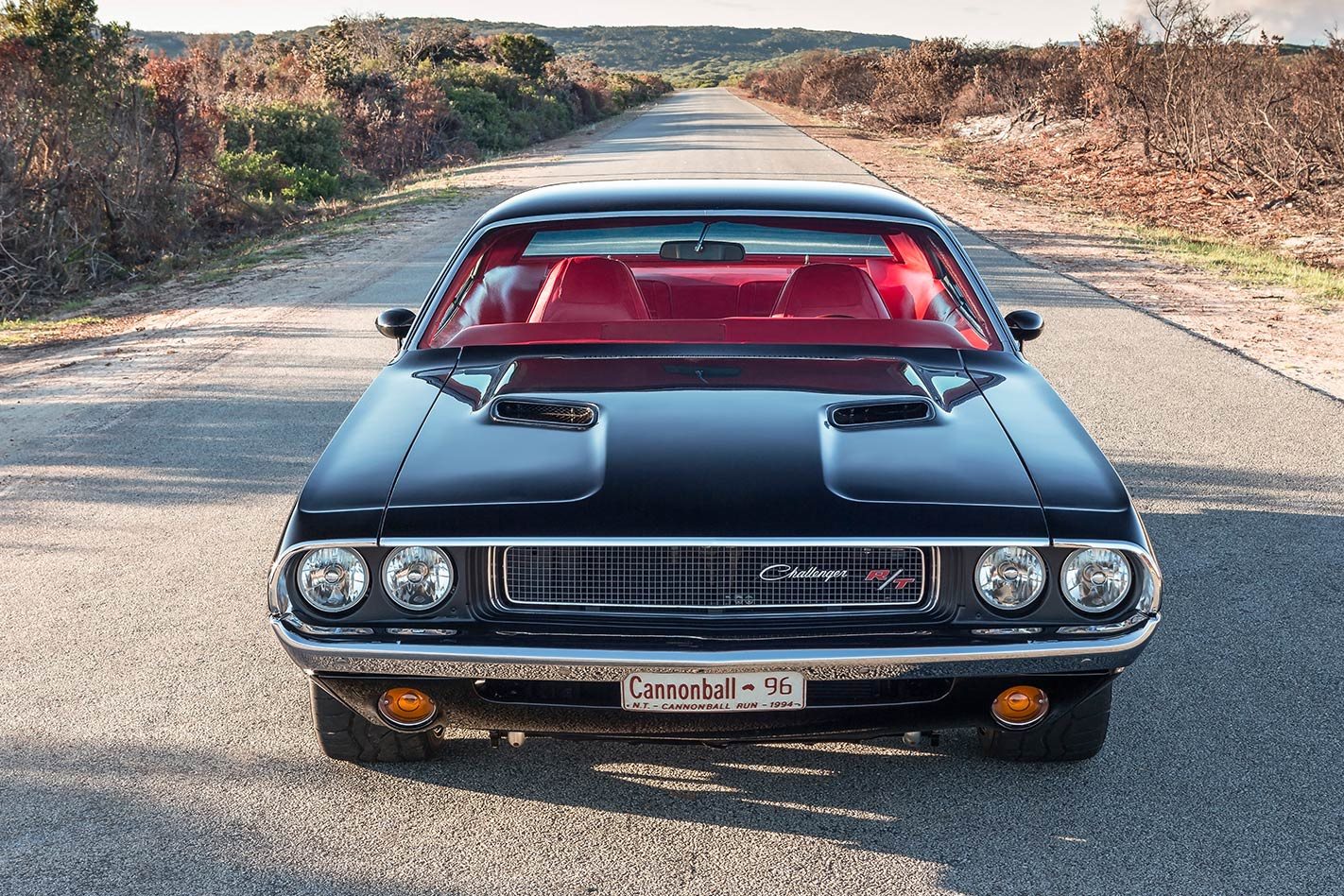 Another other cool thing about Mopar muscle cars is you never quite know what might be lurking under the hood – unless, of course, they have a giant sticker on the side telling you. It could be a small-block, big-block or Hemi. As I snuck around to the front of Shane’s car, I spotted the familiar sight of rocker covers with a bunch of plug wires going into them, but there were a lot – twice as many as you’d normally expect. I started looking for twin magnetos, but soon realised I was looking at a late-model Hemi and the plug wires were all heading to coil packs located in the valley under the intake manifold. 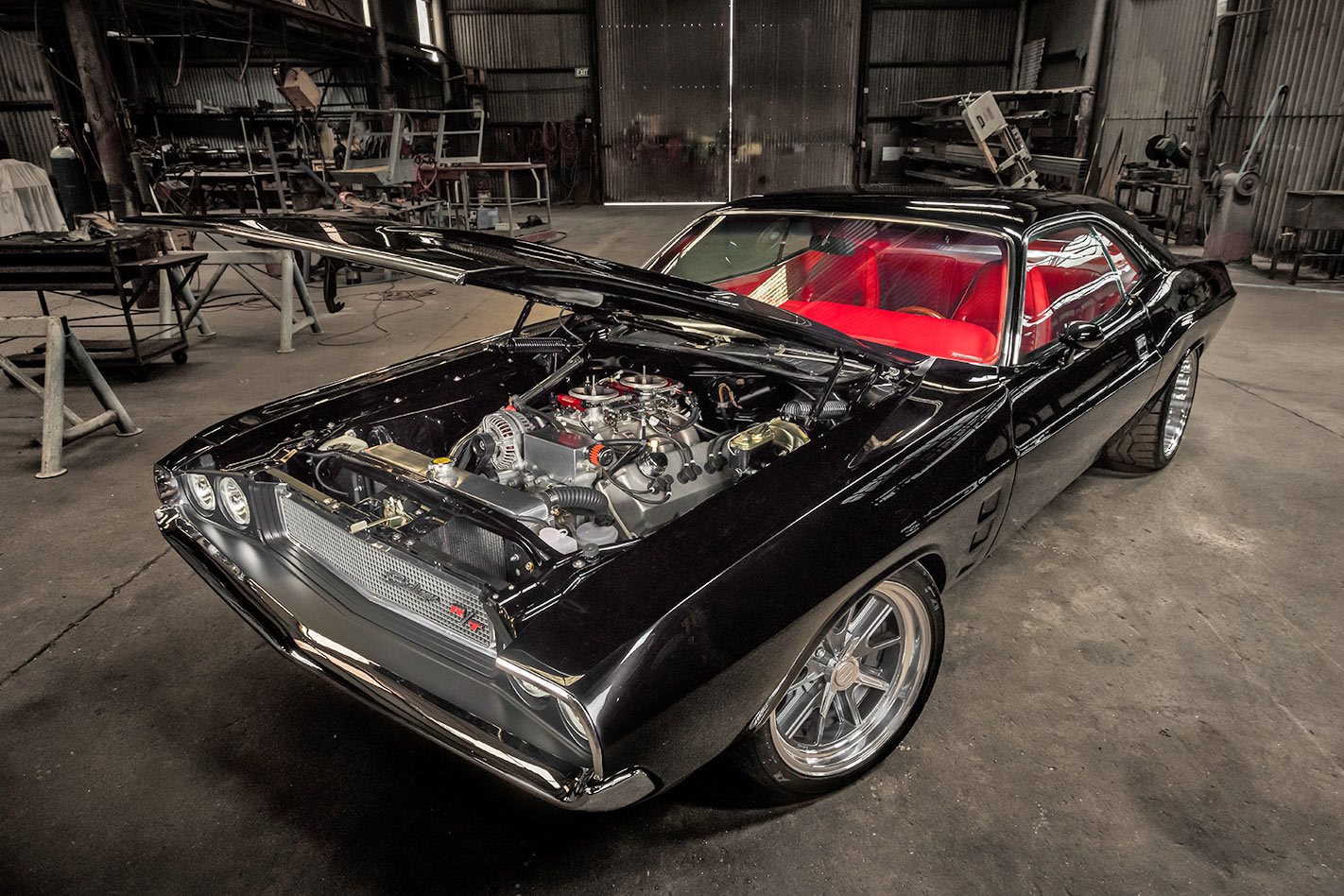 The other visual cue liable to throw off an observer is the twin chrome air cleaners, the kind you’d normally see on an old-school twin four-barrel set-up. Well, they’re still on a pair of four-barrels, but this time they’re FAST EFI throttlebodies with the injectors built in. No doubt it’s not as efficient as having port injection, but with 698hp and 580lb-ft at 6400rpm, are you really going to notice? 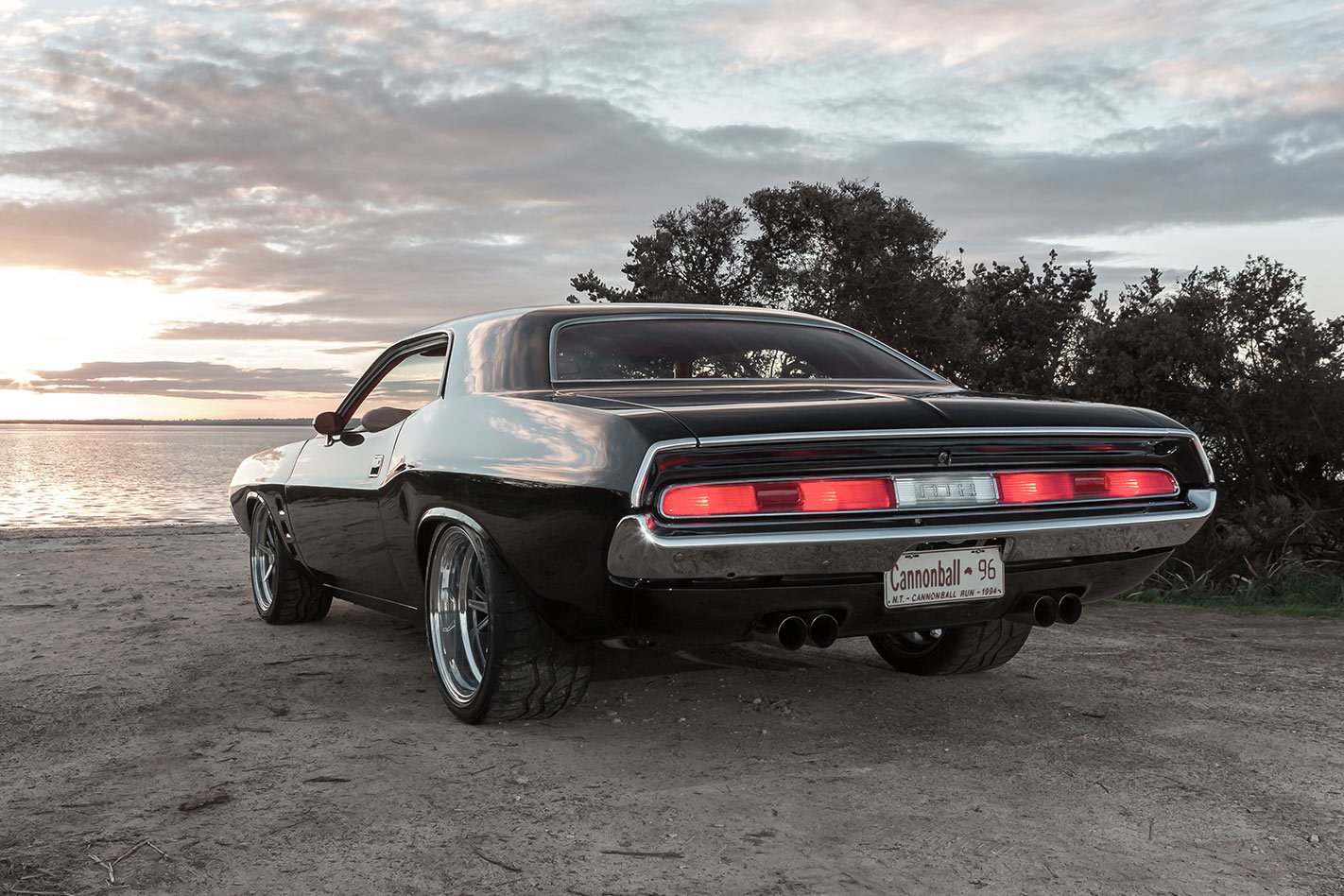 With coil-overs on all four corners, this car has been built to handle, which isn’t surprising considering Shane’s love for carving corners in Euro exotica

You’ve probably figured out by now that this car wasn’t built just to go fast in a straight line. Shane has spent a lot of time on race tracks and prefers his cars to be able to go around corners. That experience also drove the build philosophy of the Challenger. 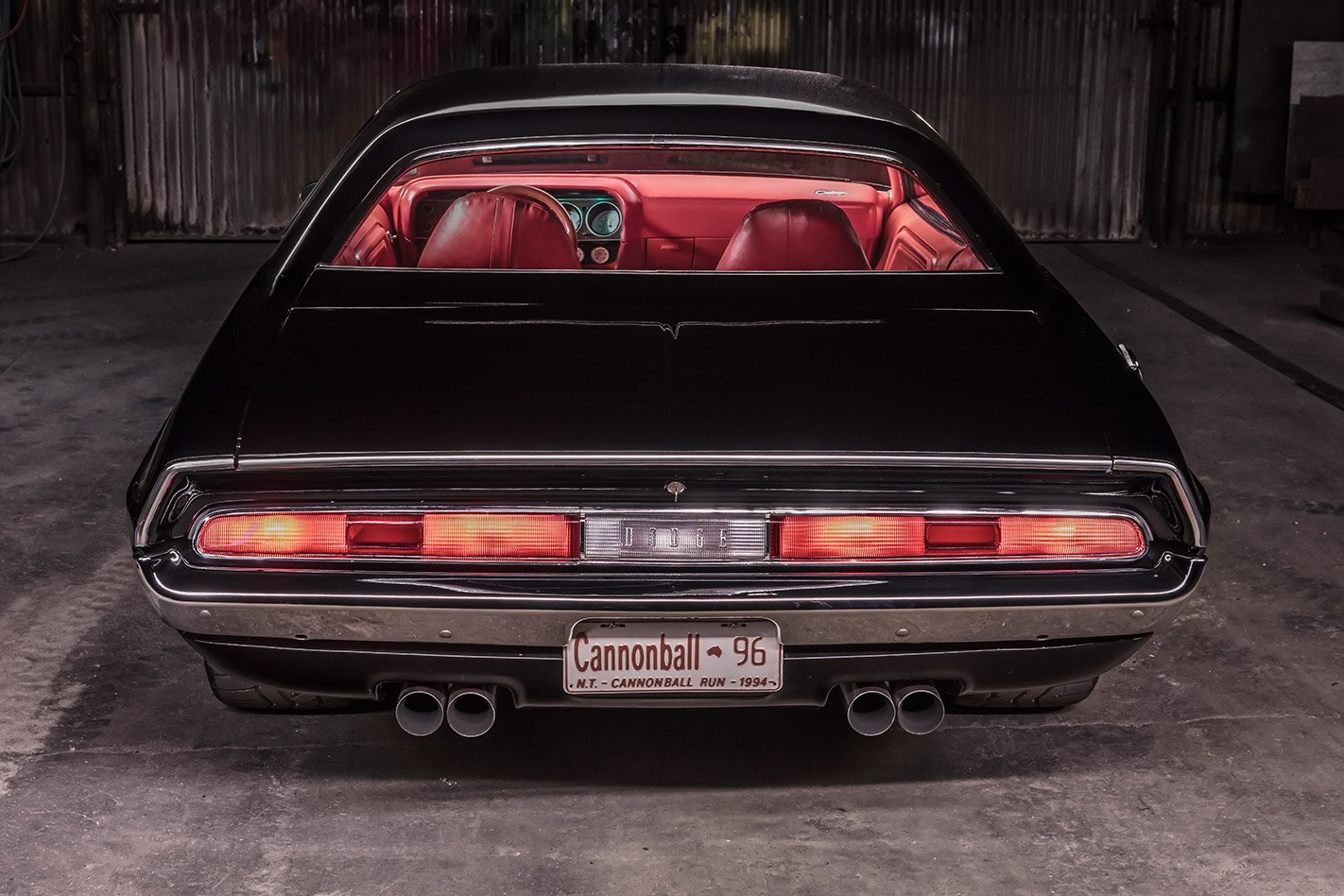 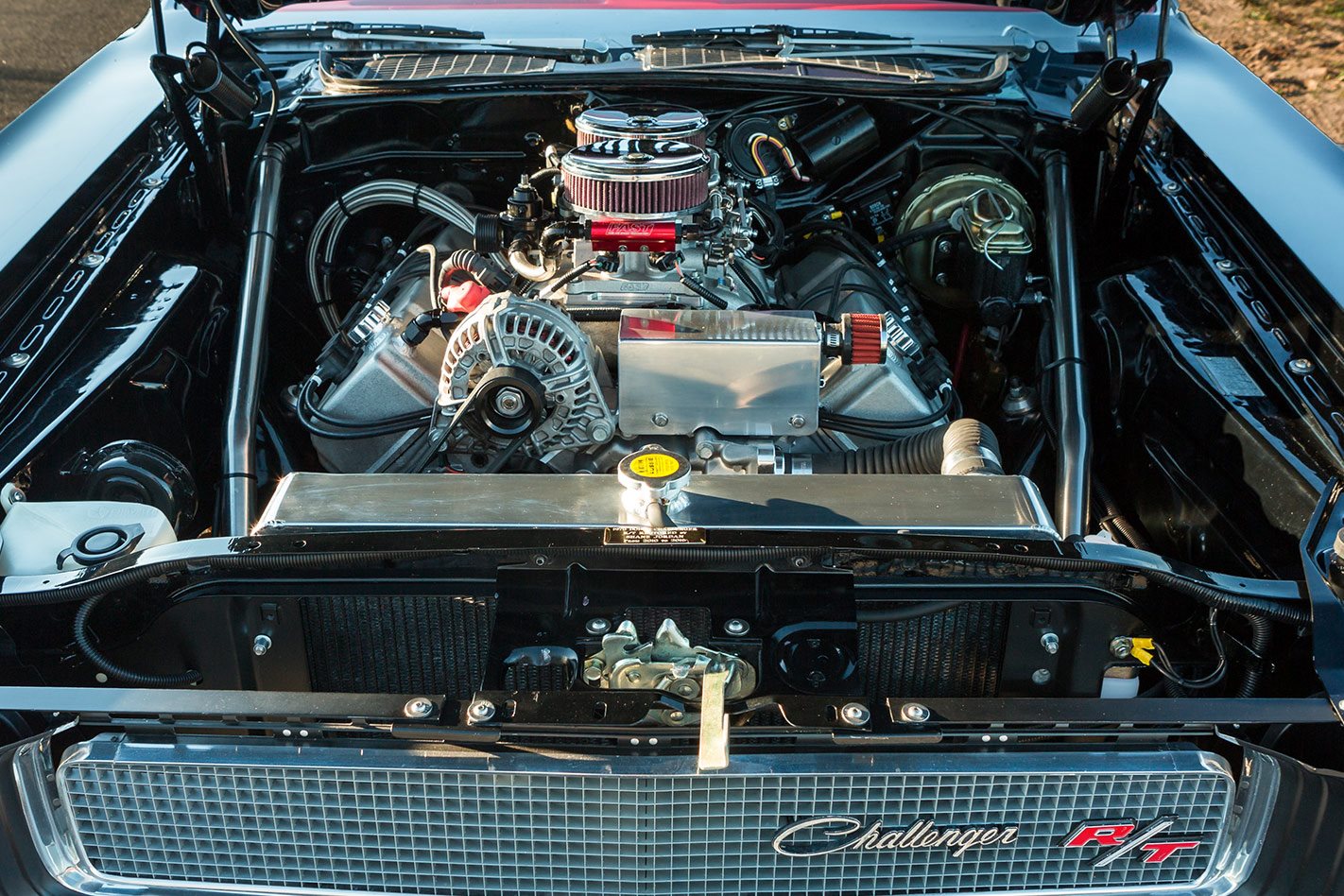 That racing attitude extended to the entire suspension, with the old torsion-bar front end getting the flick and a beautiful Magnum Force chrome-moly tubular K-member swapped in. Not only does this improve the handling and braking – with the addition of rack ’n’ pinion steering, coil-overs and big Wilwood brakes – it also leaves more room for a decent set of pipes and takes about 70kg out of the front end.

The rear end also got dragged out of the 70s with the addition of a four-link designed and fabricated in-house at Shane’s business, Wallace Engineering. 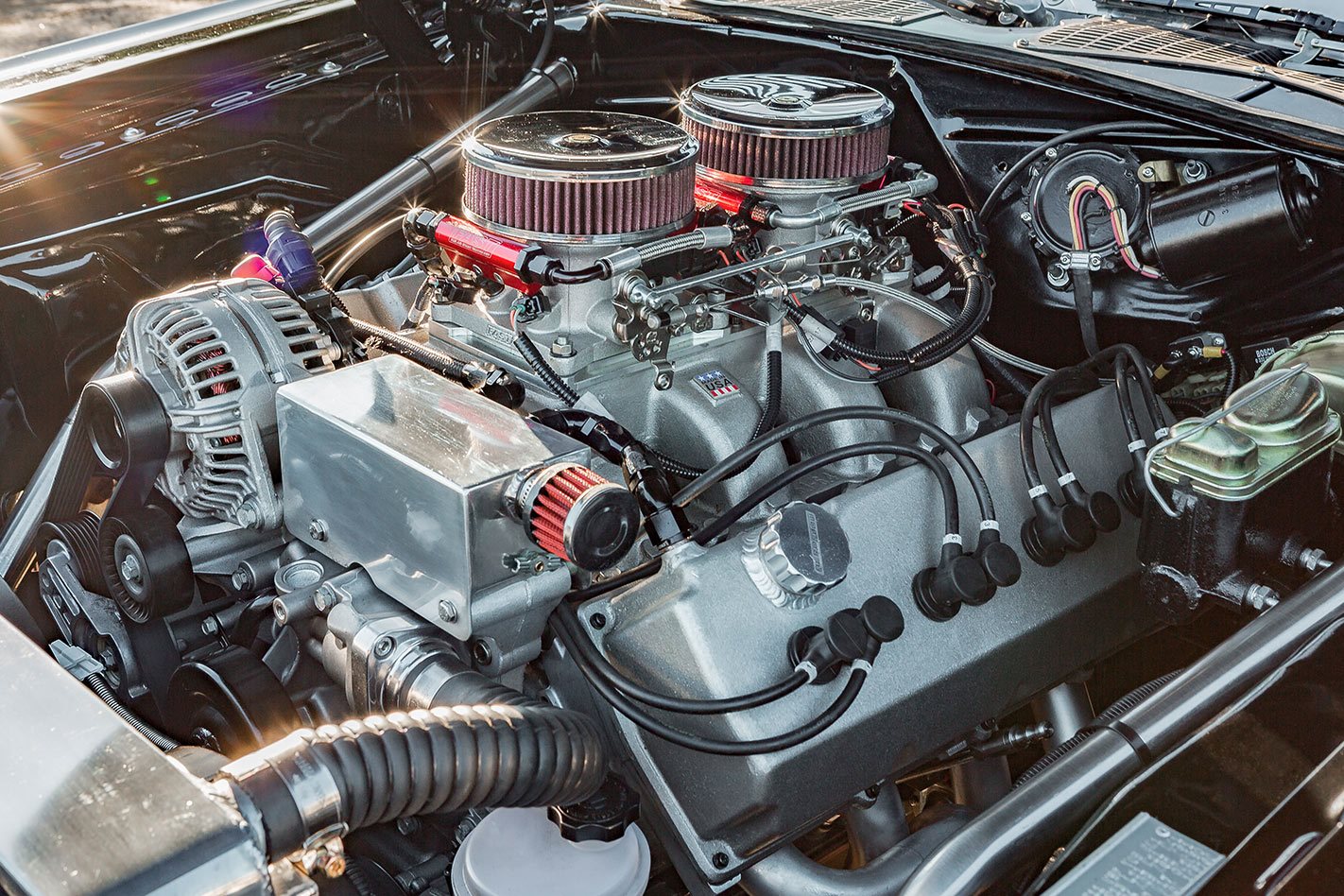 The late-model 440ci Hemi has all the modern wizardry tied together with an old-school look. The twin fours are FAST EFI throttlebodies and mean Shane didn’t need to run unsightly fuel rails

“We had a little bit of a hiccup,” he explains. “When we initially put it in, we underdid it a bit. We didn’t realise it was going to hook up and have as much horsepower as it does, so we ripped the arse-end out of it the first time I did a skid. So we had to put it back on the hoist and spend another 100 hours re-engineering the pick-up points. 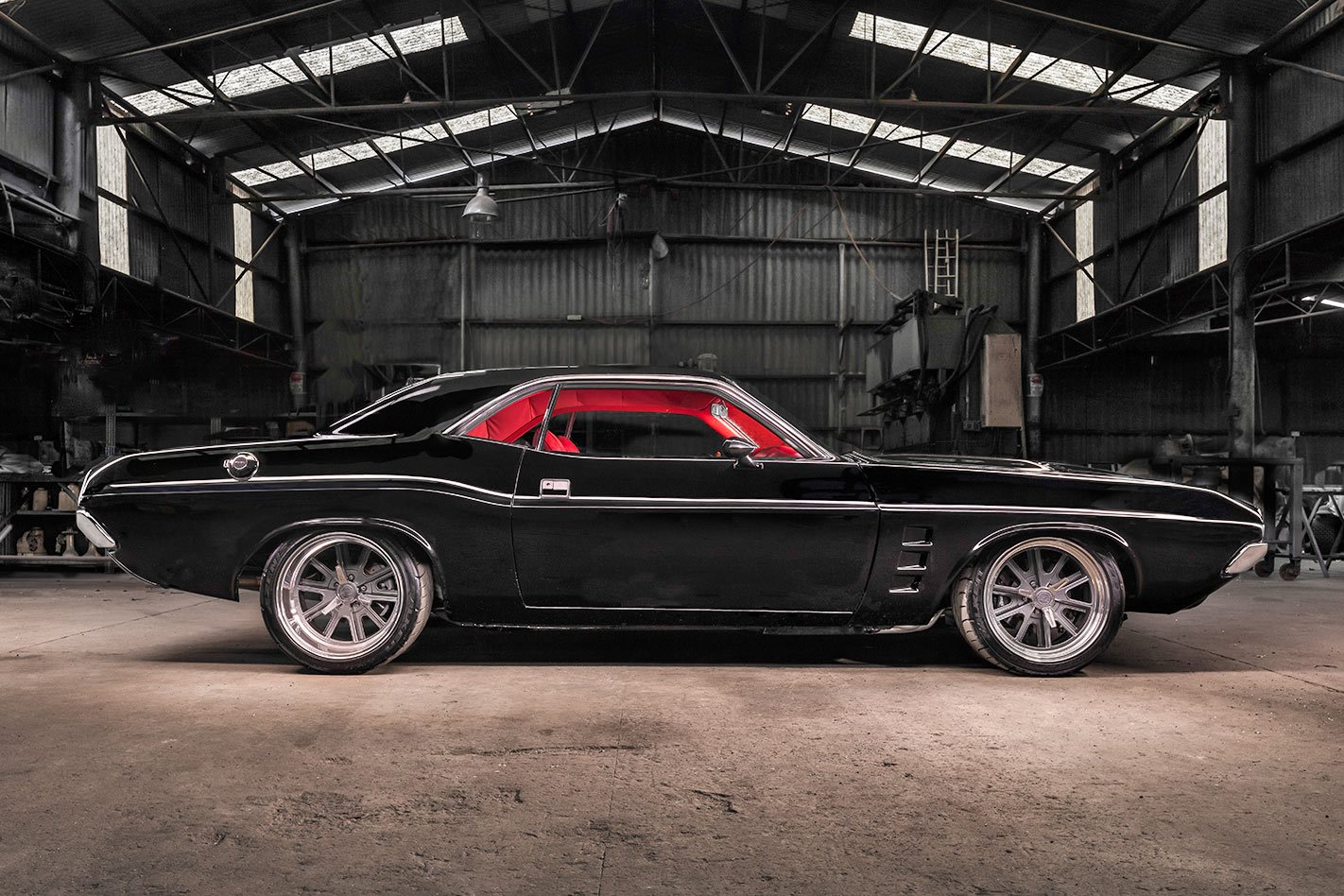 I don’t care where your loyalties lie; you can’t deny the Challenger is a beautiful-looking car. The 18-inch AR Shelby wheels fill the guards to perfection and don’t look oversized

“I just like to say we had to do a bit of development on it,” he laughs. “We wanted to keep it as light as possible and as durable as possible, but we failed there!”

A lot of effort also went into stiffening the bodyshell, with stitch welding along the seams as well as chassis stiffening. 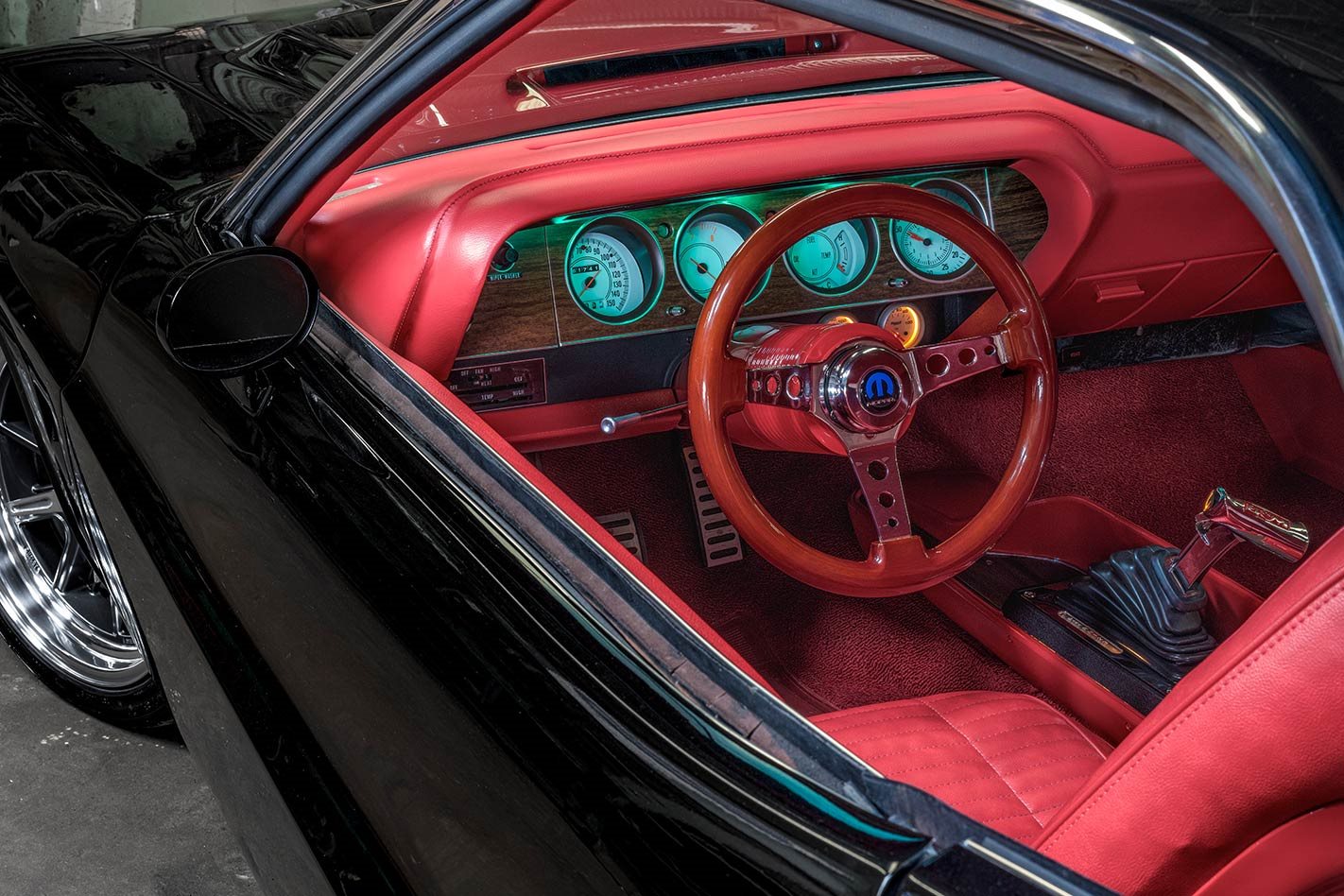 “I knew these cars were really terrible,” Shane says. “The Hemi cars would twist that much they’d pop the windscreen out. So we put a rail from front to back, which looks OEM, you wouldn’t even pick up that it’s been put in there. It’s a work of art!”

Shane also added a few personal touches to the bodywork. 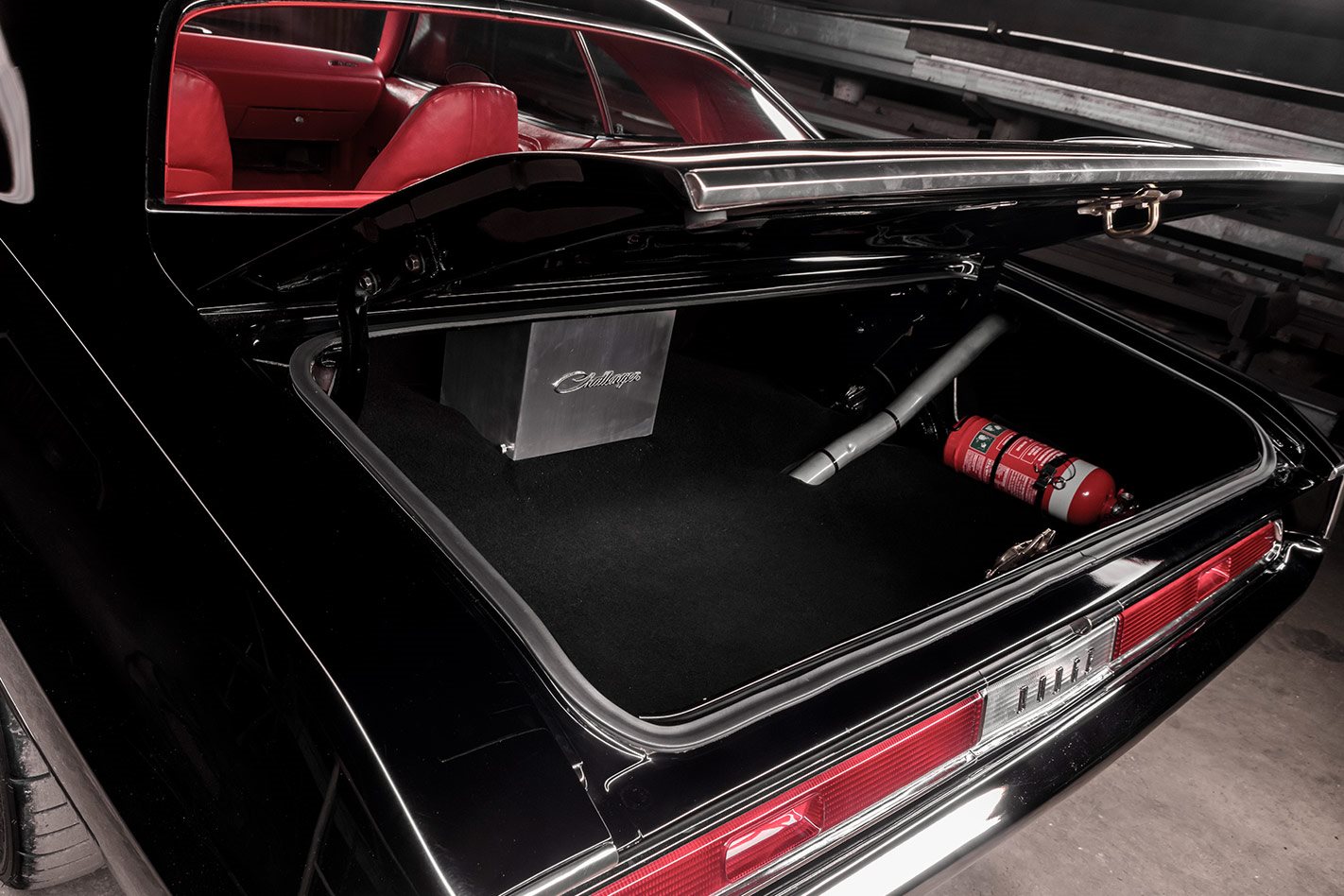 “I got rid of all the side-lights, chrome, the aerial and the little lights on top of the guards that tell you the headlights are on. I also put HJ GTS flutes into the guards.”

Wait, what? Don’t worry, I’ll let Shane explain his way out of this one. 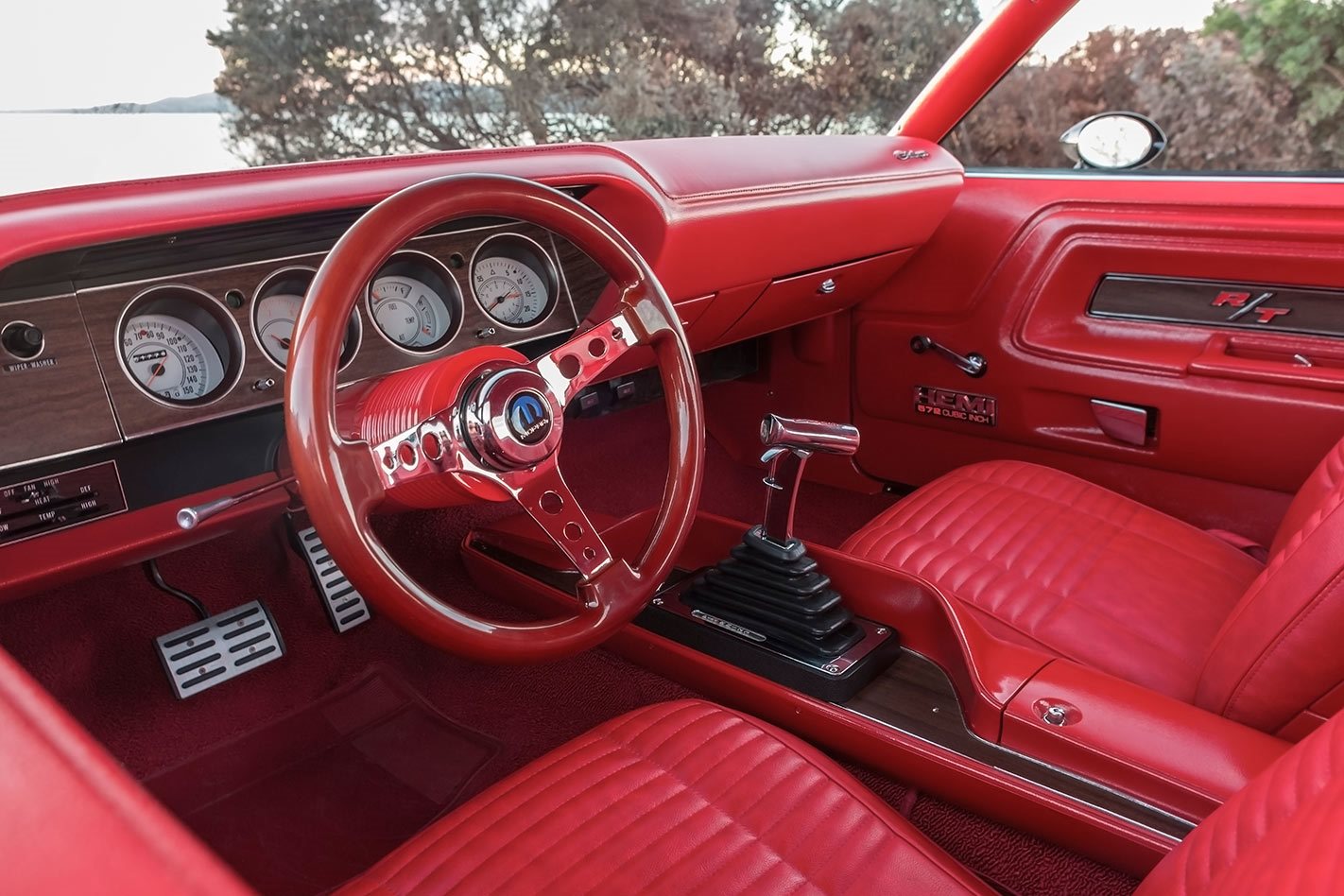 You couldn’t get a bright red interior back in 1970, but it sure looks nice against the PPG Jet Black paint. Shane kept the original dash intact but updated it with white-faced gauges

“The 1968-70 Dodge Charger has got a bigger version of those flutes in the doors, so it’s along that theme. I thought they looked very similar and people will think that it’s some Mopar part that no one’s ever seen before. Because the car’s black, you don’t really see them.” 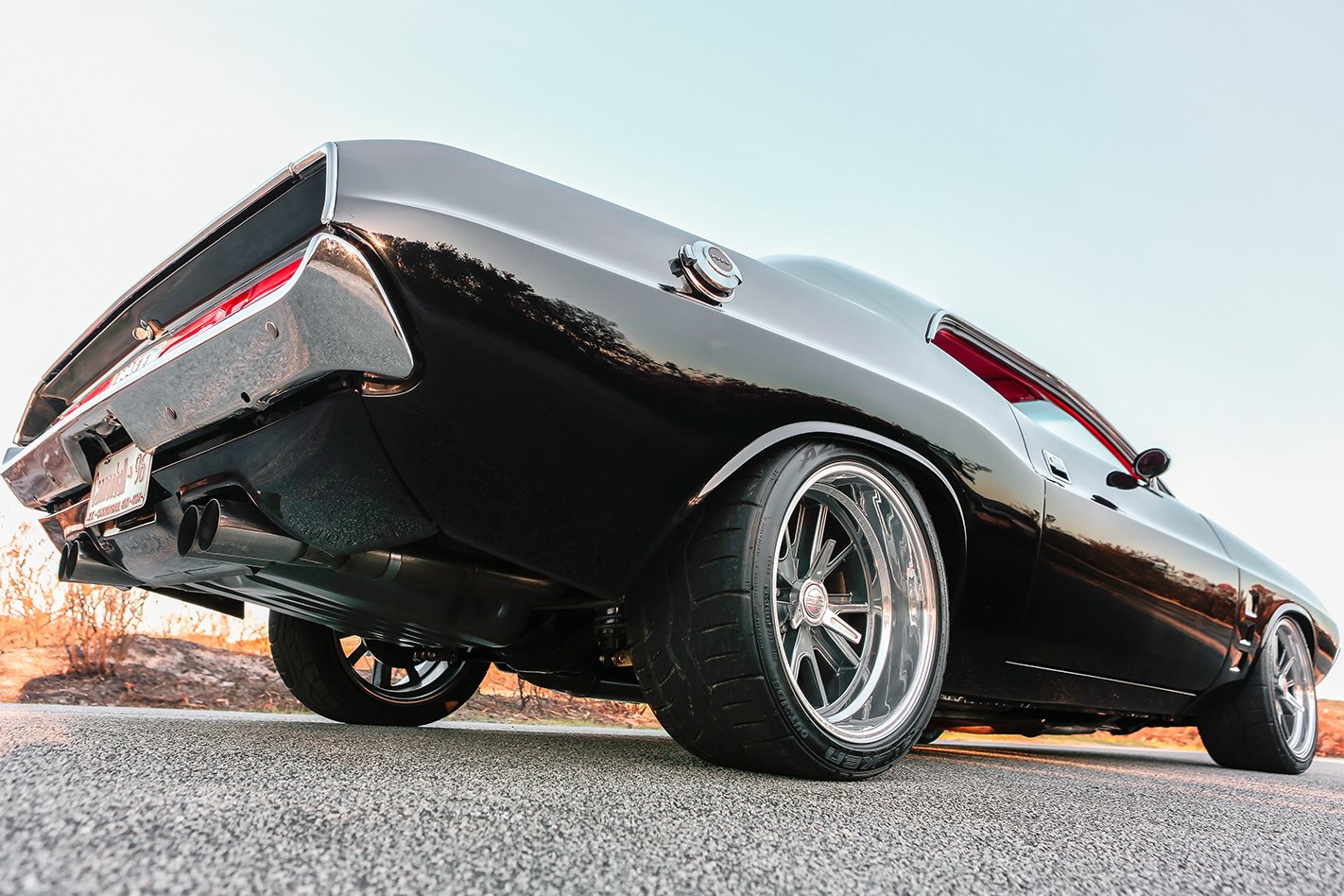 There’s actually quite a lot going on underneath the Challenger. At the front is a Magnum Force tubular front end, and at the rear, a nine-inch with a four-link engineered and fabricated by Shane’s business, Wallace Engineering

Rounding out the whole package are the American Racing Shelby rims that measure up at 18x9 inches up front and 18x11 out the back. Mopar stuff is renowned for being able to swallow up plenty of rubber, but Shane still needed to conjure a few tricks to get everything to fit. Up front, the internal braces were removed to get the car as low as he wanted. The rear wheel wells were then squared off so that the 315/35 tyres wouldn’t rub on anything. Remember when a set of 265s was big on the back of your car? Well, Shane’s running them on the front of the Challenger! 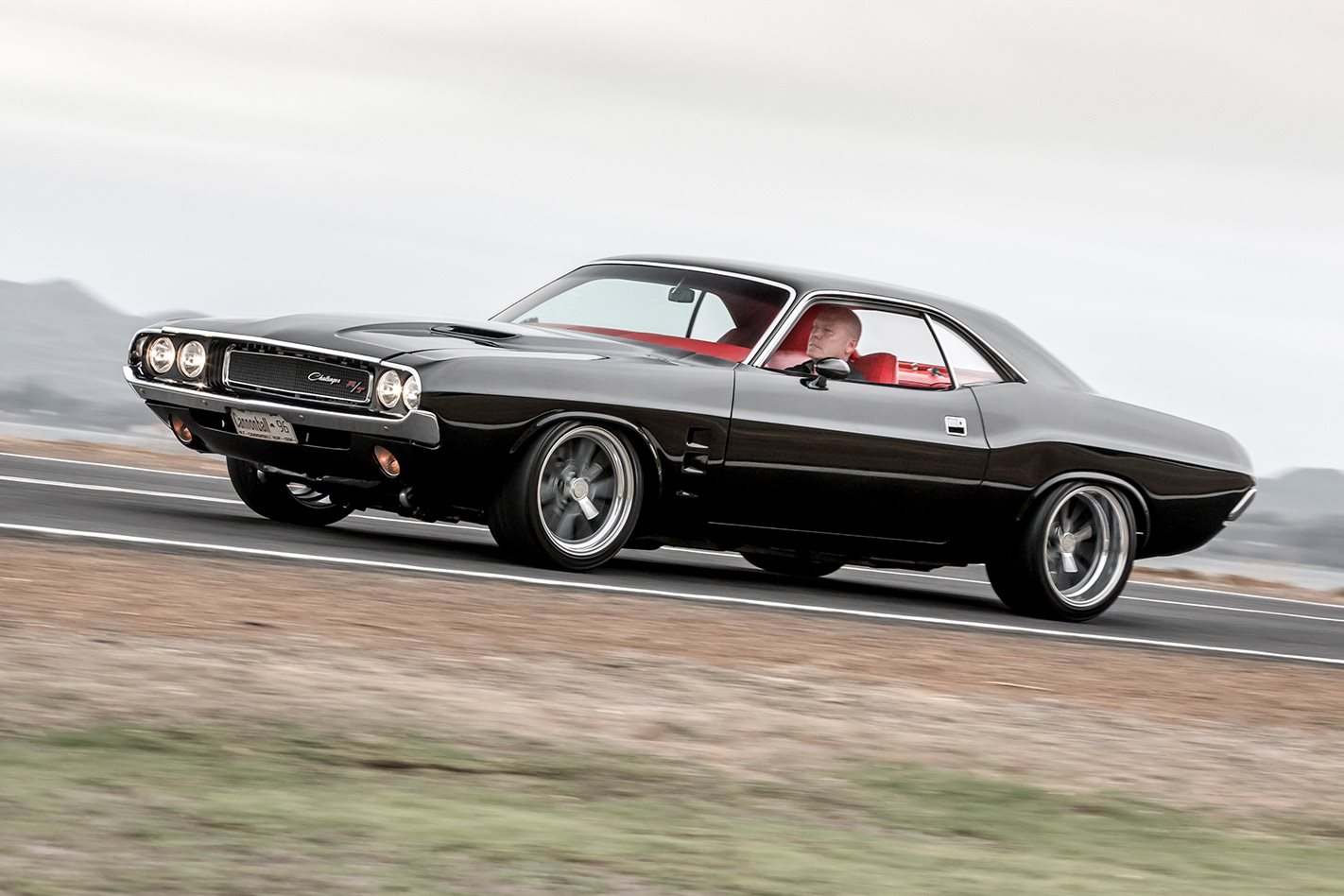 Yep, this mighty Mopar is a genuine triple threat – it’s quick in a straight line, can carve up the corners, and it looks good doing it.