Tougher than watching your girlfriend walk down the aisle with the geek from next door. Tougher than a strike at McDonald’s.

Tougher than a cheese-grater in your Y-fronts. 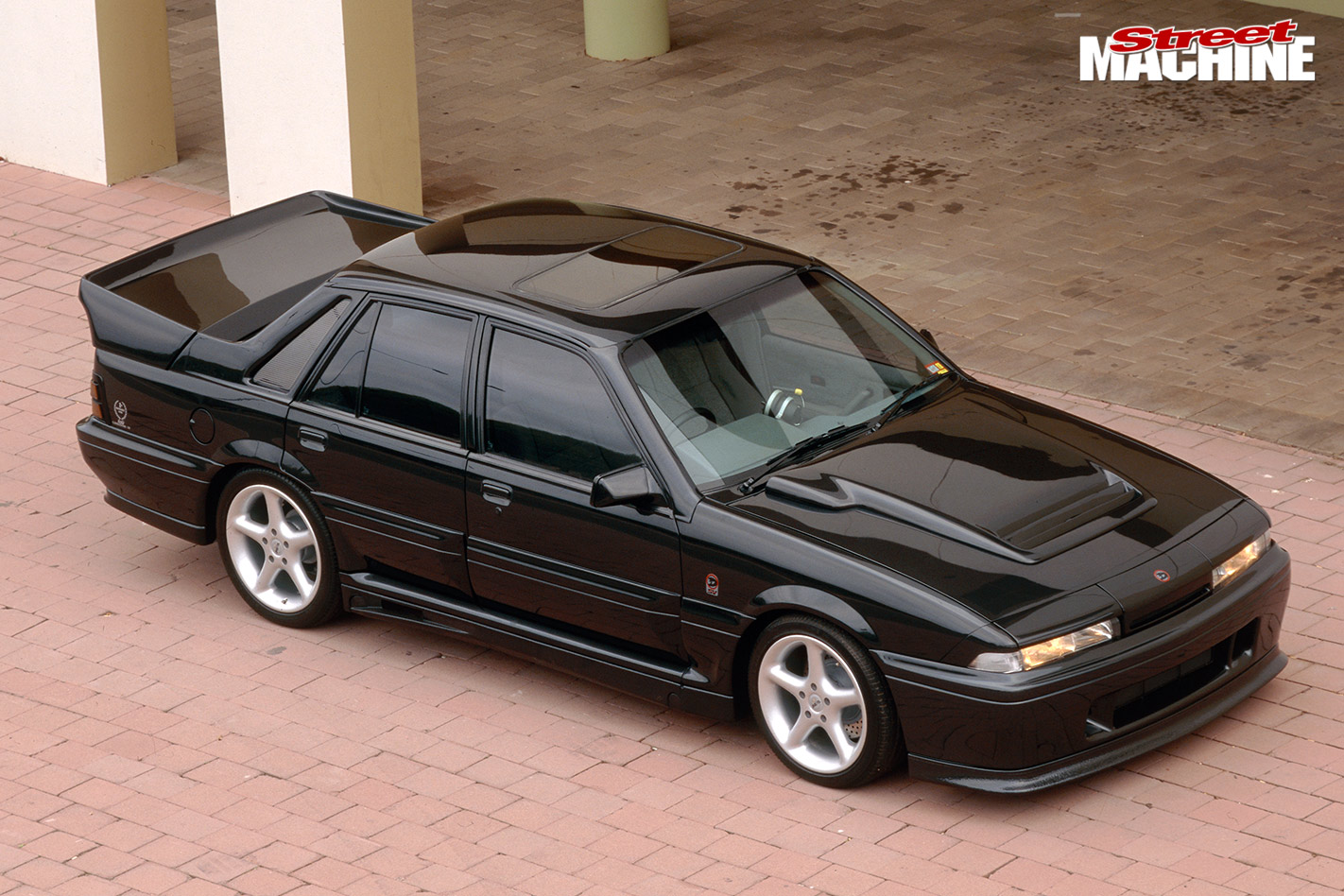 OK – so how tough, exactly? Well, the dyno says 550hp at the flywheel, and at Summernats 9 the big bugger’s handler, Melbourne’s Anthony Fabris, wheeled it up onto the chassis dyno where it wheeled out an honest to goodness 325 neddies at the rear wheels – in the stinkin’ heat. 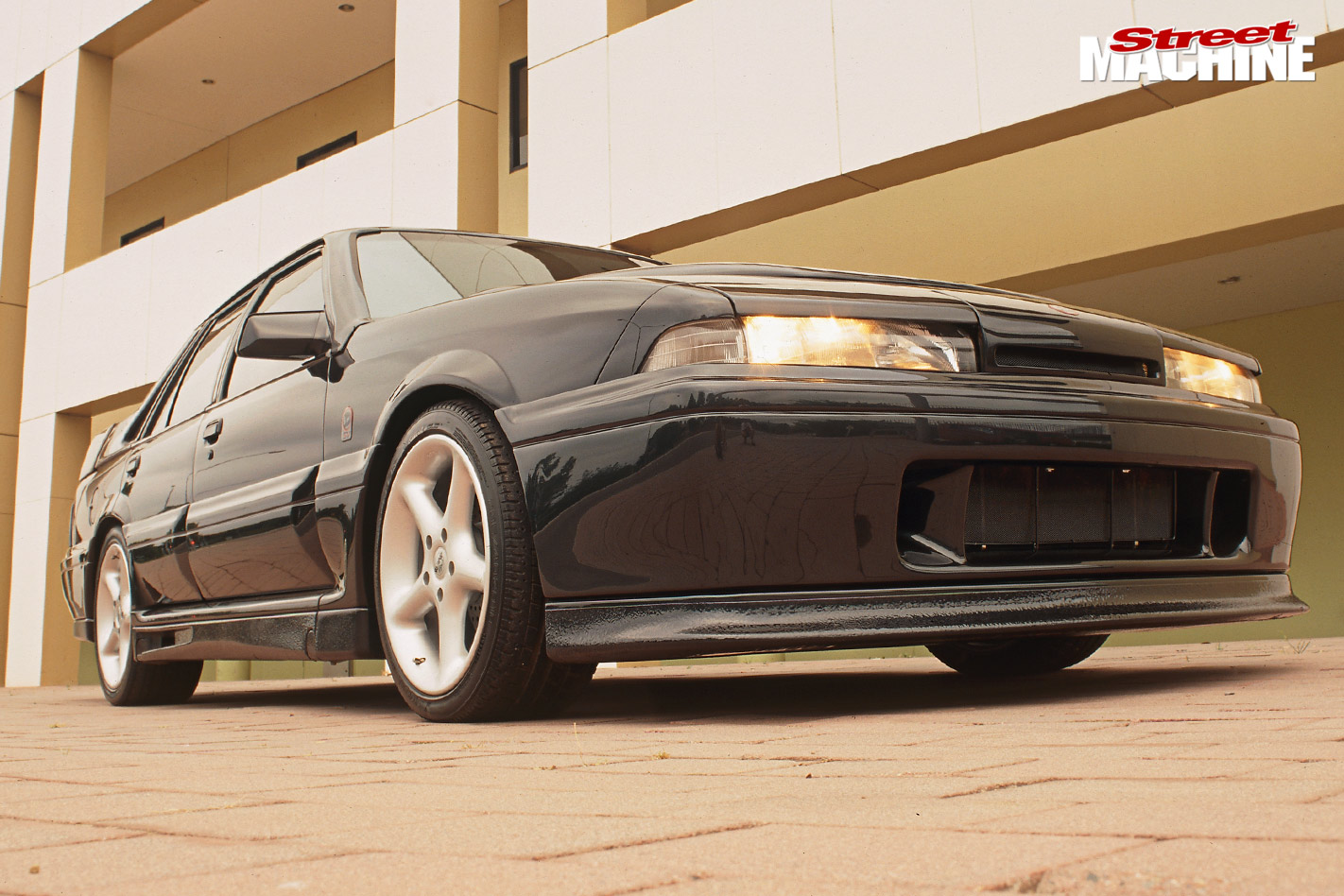 Looking at the spec sheet for the engine, you’d reckon Anthony had shrunk a speed shop in the washing machine and bolted it between the Commodore’s front rails. Fact is, there’s a fair few Bathurst-winning brain cells under the lid, too, with input from none other than legendary engine builder and driver Larry Perkins himself.

Now we all know a street 304 is going to be hard-pressed to crank out five-and-a-half hunnert horses without a blower of some sort. You guessed it, Anthony went for more capacity courtesy of a stroker crank from Melbourne outfit Crankshaft Rebuilders (who’ve had a hand in Perkins’ own race cranks). 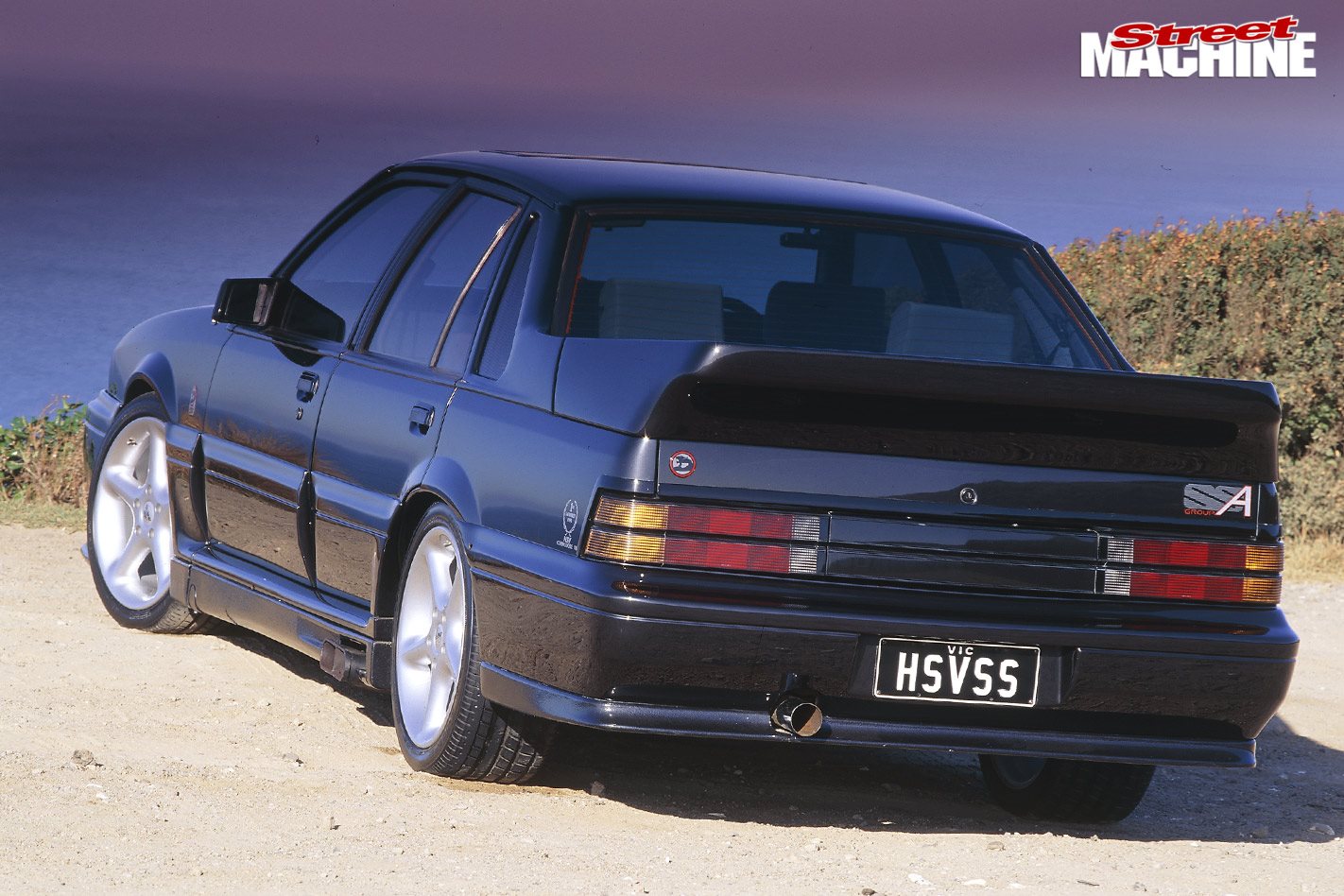 With 325hp at the wheels, this Walkinshaw was a monster in the early days of Summernats’ Horsepower Heroes. These days, 1000hp is a slow qualifying run!

These days, the 304 is a full 42 cubes better off and resists its urge to bash its pistons into the heads thanks to Carrillo conrods. The mega-buck race hardware doesn’t stop there. The pistons are SPS fully-floating mothers and ARP rod bolts keep it all together. 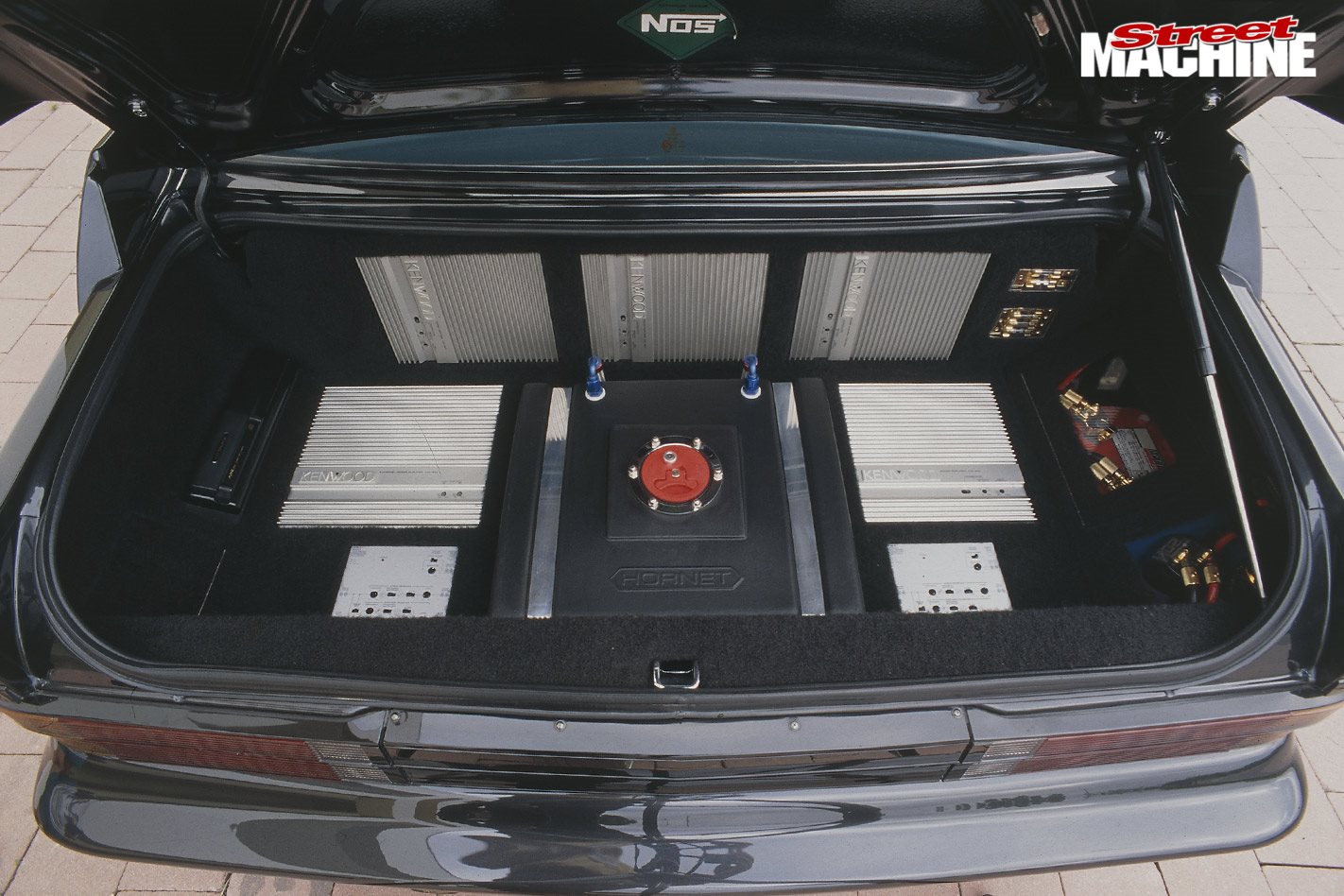 Heads are Holden. Mind you, they’re fully ported, run big AUSCAR valves and suck through a big-flowing HSV intake manifold. The injection computer itself is MoTeC so it’s adaptable to whatever Anthony wants, which is a good thing because the camshaft is a Crane roller featuring Larry’s own favourite grind for street motors.

Valve springs are a mixture of Perkins and Crane while Larry also supplied the headers that meet up with a custom system and an HM megaphone. The rest of the package is all brand name tough stuff including a double-row timing set, alloy radiator and a seven-litre oil pan. 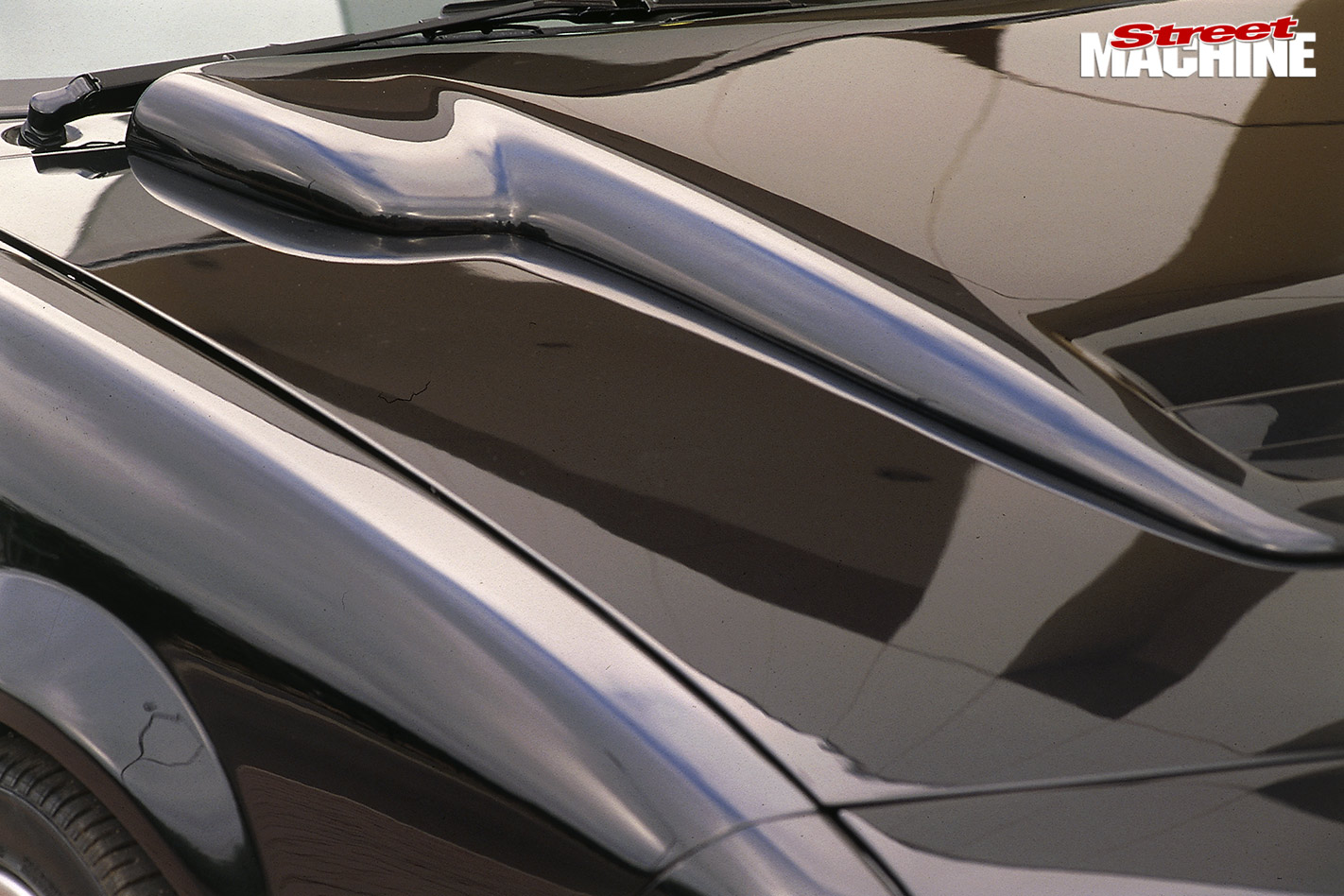 Now, you don’t put a stock Trimatic gearbox behind all that, so Anthony hasn’t. The box of tricks is a VN Commodore SS Group A-spec ZF six-cogger that cops the elbow from a Centerforce clutch. Duggan Balancing came up with a three-inch tailshaft, and a nine-inch butt running 3.7:1 gears and Summers Brothers axles cops it sweet.

If all this is starting to sound like the sort of weapon that would have taken a chequered flag at Bathurst not too many years ago, you’re starting to get the idea. 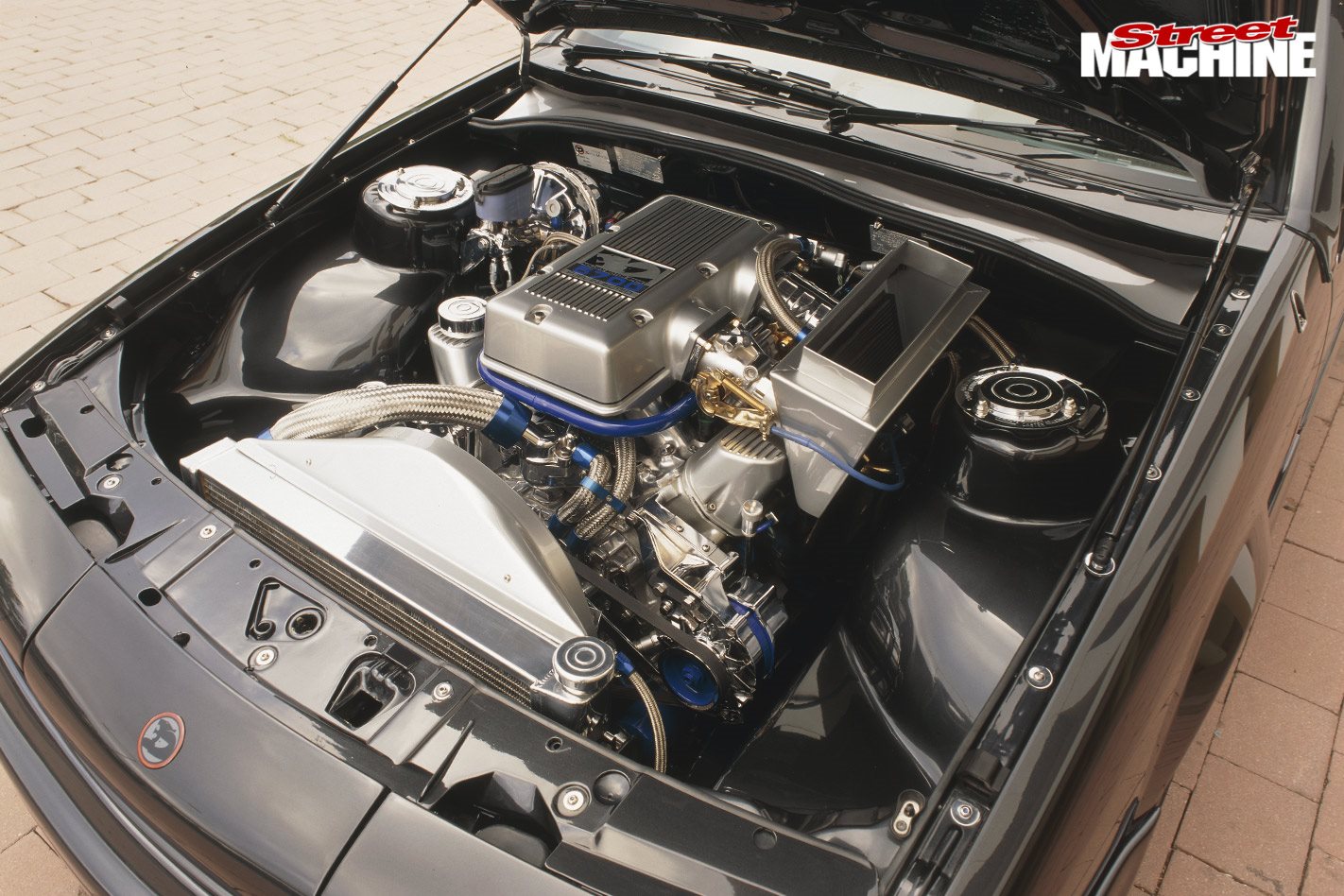 Sticking with the racecar technology, the suspension has been sorted with Lloyd springs, nylon bushes everywhere, and dirty big stabiliser bars at each end.

The standard brakes do the job out back although they have been cross-drilled, but the big action is up front where a set of Harrop 13½-inch discs (yep, that racecar thing again) now reside. Only thing we can’t work out are the front calipers. Sure, they’re four-potters, but four-potters from a Volvo? Then again, if anybody knows anything about stopping anywhere at any time, it’s a Volvo driver. 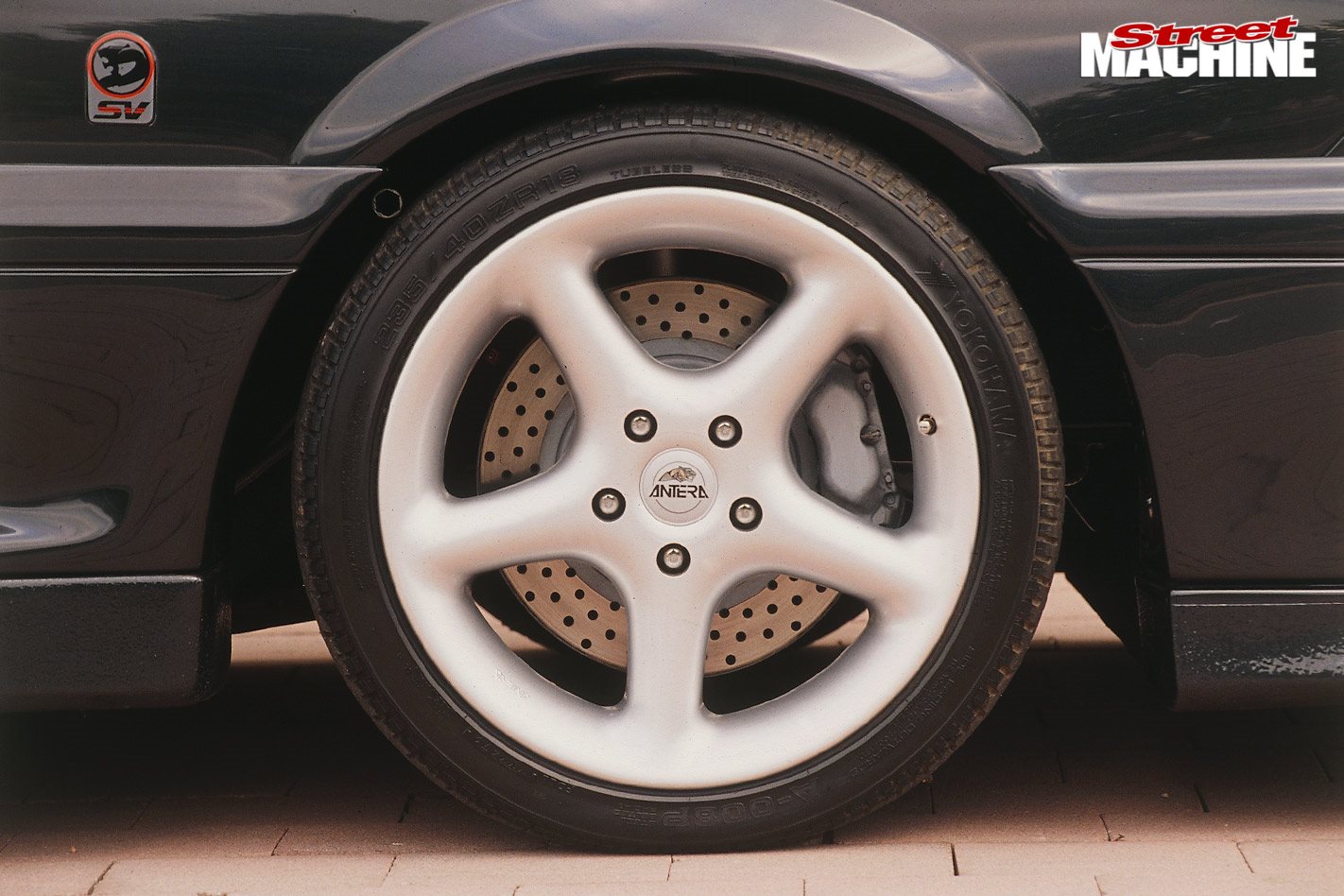 The car runs the full Walkinshaw bodykit – because it was a Walkinshaw Group A to begin with – with a Calais nose grafted on. Paint is pearl-black Glasurit and there are five coats between the bare metal and your eyeballs. And get this, Anthony sprayed the jigger himself, despite the fact he makes a living banging nails into bits of wood as a builder.

Looking inside, you’ll see aftermarket tacho, oil pressure and water temp gauges and a Momo steering wheel. You mightn’t see it but you’ll sure as hell hear it: an Alpine head unit, Boston Acoustic speakers, a brace of Altec Lansing subs and five Kenwood amps. 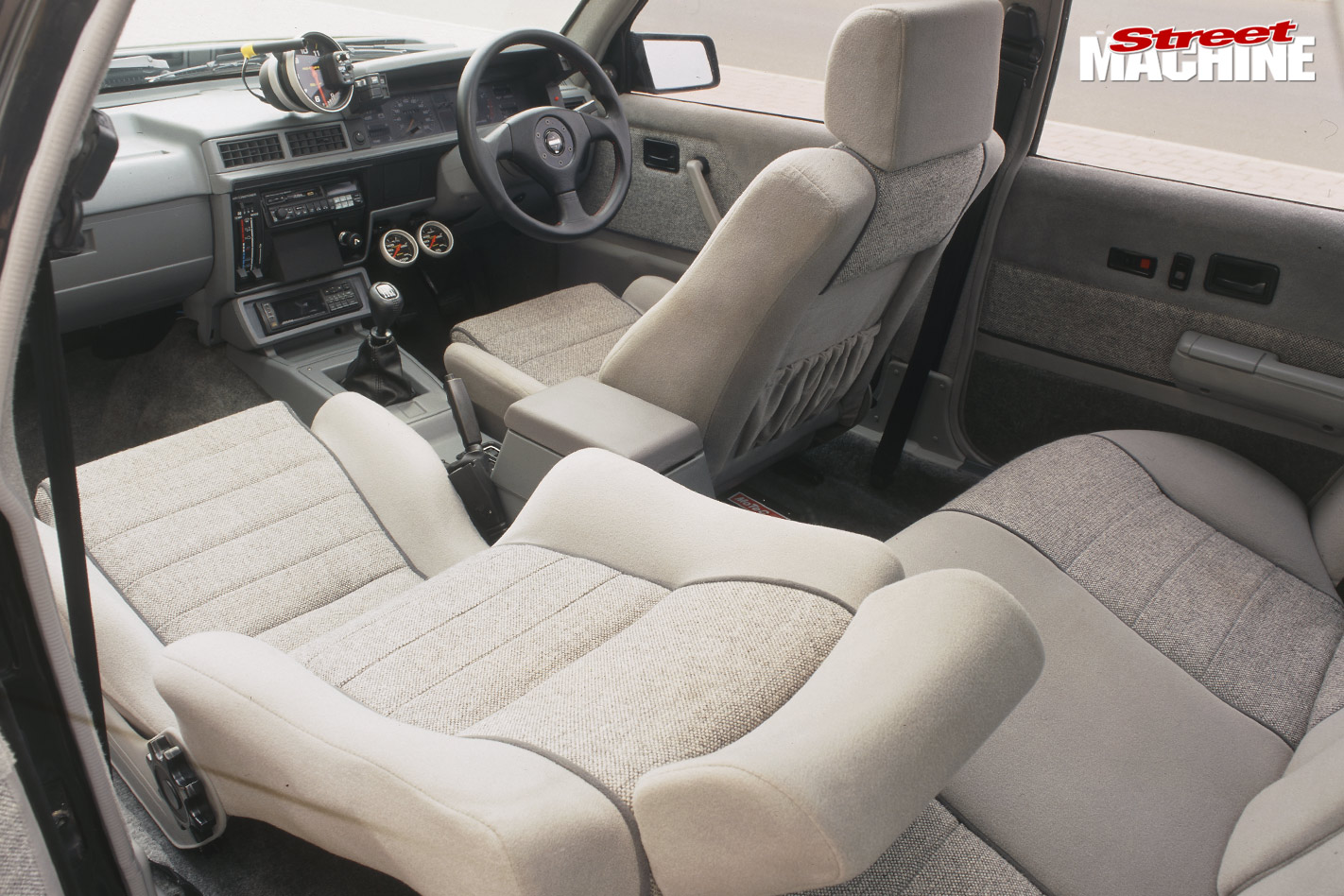 So far the VL has soaked up about $70,000 and taken three years to get to this stage. And that, sports fans, is truckloads of nails getting banged into a helluva lot of wood.

It was the first vehicle out of Holden’s Special Vehicles division but the VL Commodore Group A SS is memorable for many reasons. Never had an Australian-produced car featured such an extensive bodykit, and it was a love or hate affair for most people when they laid eyes on it.

Popularly known as the Walkinshaw (in reference to Tom Walkinshaw from TWR who had significant input into the design) the VL Group A SS had Holden’s first injected V8.

Pumping out 180kW, it was a ball-tearer — back then the carby-fed VL 5.0-litre only produced 122kW so the Walkinshaw was just as big a shock as the Gen III proved to be 12 years later. 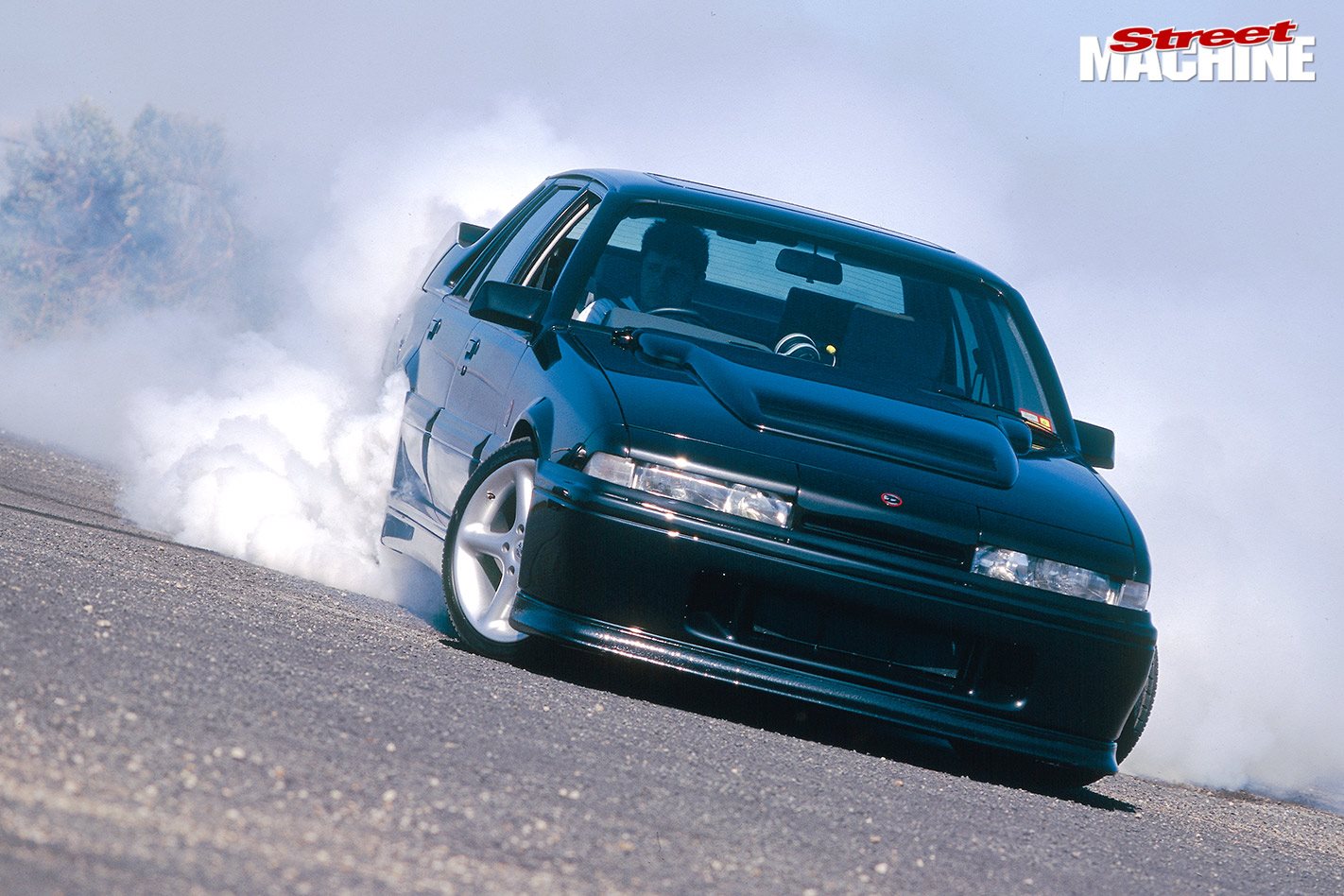 Initially only 500 were built but the decision was made to create another 250 after the first 500 were snapped up. It proved to be a bad call — those last 250 cars took ages to sell after news of the upcoming VN Group A SS leaked out. Most who had the dollars waited to see the VN Group A – and then came an economic recession.

To buy one new cost $47,000 but after a few years secondhand examples were seen for less than $20,000. These days the future’s brighter for Walky owners, with better examples bringing terrific money and respect from a whole new legion of fans who never saw the VL Group A SS race but who love it just the same. 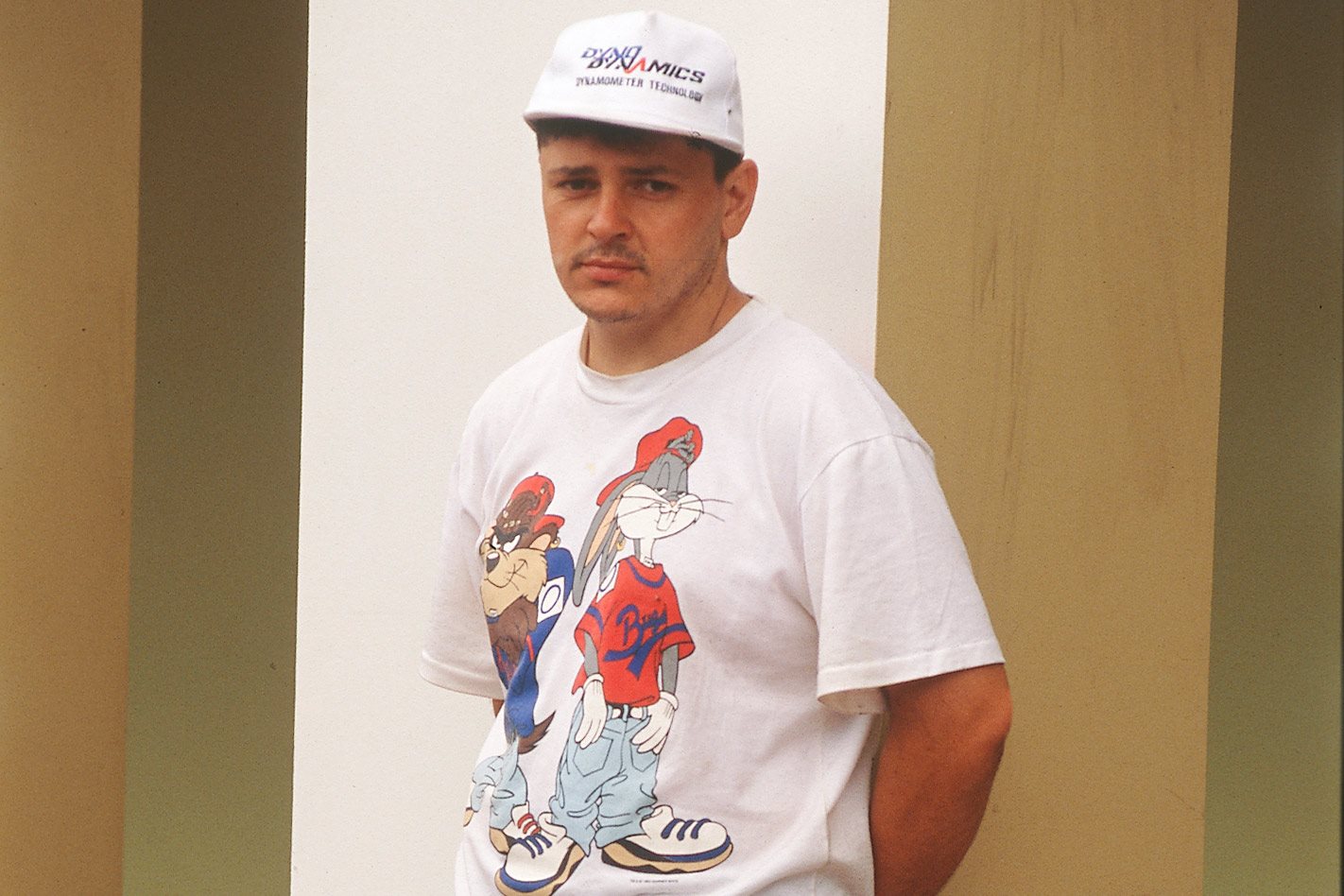 Cool info: After this brick-tough Walkinshaw, Anthony Fabris built a sweet ’57 Chev and an early Monaro. Both were Summernats Elite cars