JUST about every dyed-in-the-wool Holden fan loves the one-tonner, and Street Machine Summernats 30 Grand Champion Mark ‘Happy’ Williams is no different. He can’t really remember a time he didn’t want a tonner.

“I’ve always wanted one since I was about 10 years old,” he says. “I finally bought this one after harassing the bloke for years. It ran a 350, Turbo 350 and Salisbury, but as soon as I bought it I changed the wheels, lowered it, put a nine-inch in it and dropped the tray onto the chassis.” At the time, Happy lived in Newman, a mining town about 1200km north-east of Perth, and his tonner was used as a daily driver, spending most of its time on gravel roads. Around nine years ago he pulled it off the road for a quick rebuild, and we all know how that usually pans out. “The plan was to put in a 434 small-block and Turbo 400, repaint it, retrim it and then be back cruising. Yeah, right!” Happy laughs. “Then I bought a ProCharged 406 and 15-inch-wide rears, which meant we had to modify the chassis to suit.”

As luck would have it, a bare chassis popped up for sale that had already been modified to fit some big rear wheels, but it still needed a bit of work: “It had a four-link in it, but it was poorly made, so I cut it all out and started again, replacing it with moly bars and Pro9 brackets,” Happy says. Cronic Customs was tasked with building the substantial drop tank and fitting McDonald Brothers tubular upper and lower arms, as well as Torana rack-and-pinion steering. 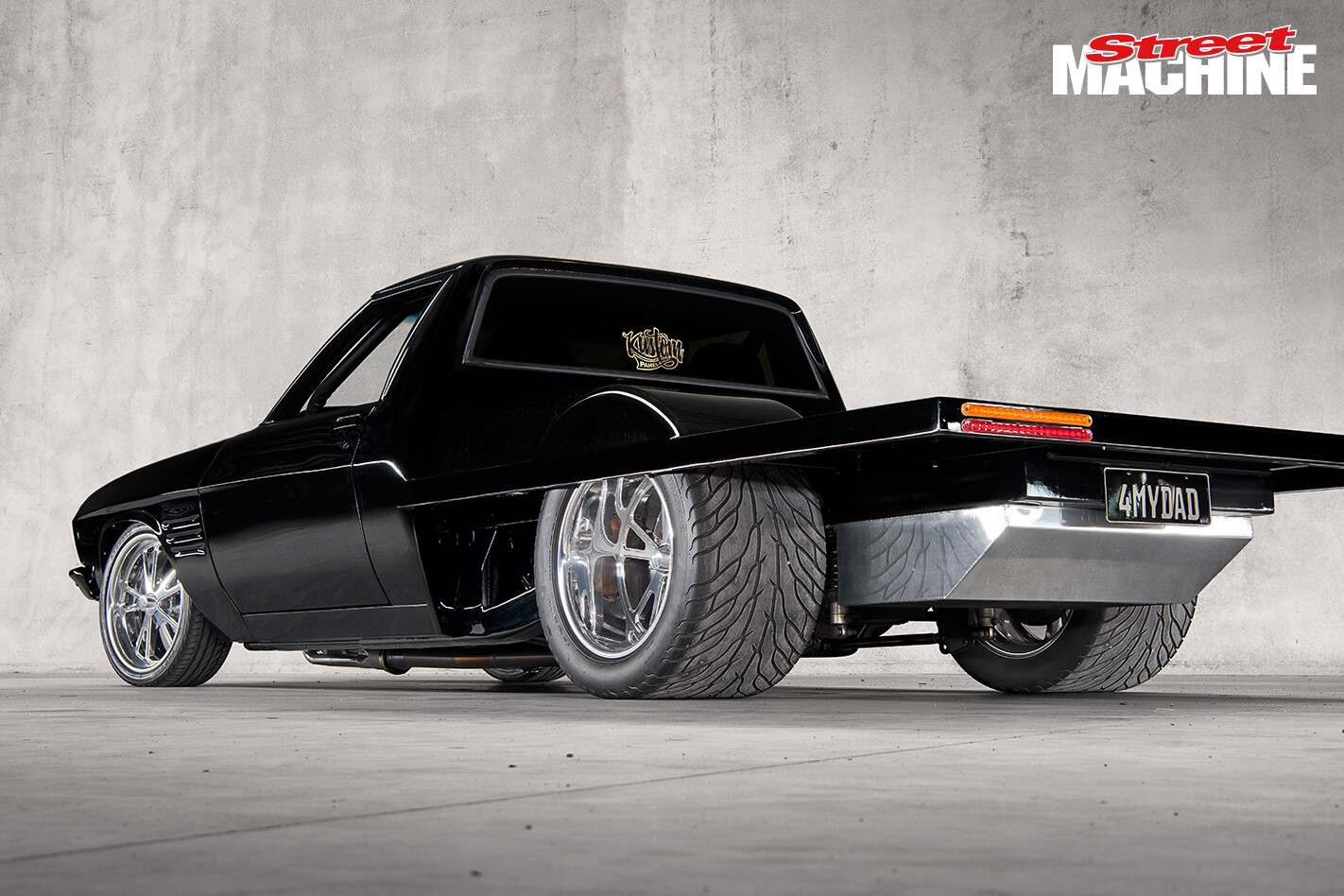 It’s all business in the rear end, with a tough-as-nails sheet-metal nine-inch put together by Phil Purser at Final Drive Engineering. It’s got 35-spline axles, 3.2:1 gears, Wavetrac LSD and a Strange carrier. With the length of one-tonner tailshafts being a real problem once you start trying to put some power down, Happy didn’t skimp in this area either, fitting a carbonfibre unit from The Driveshaft Shop.

As Happy does plan to take it down the strip eventually, there is a close-fitting ’cage by Next Gen Race Fab. They were also responsible for the twin three-inch stainless exhaust and the complex pipework for the water-to-air intercooler, which runs through the firewall to a cooler that’s mounted behind the glovebox. With the intercooler tucked in as tight as possible, Happy designed a custom dash that incorporates HJ-HZ Kingswood styling cues on the passenger side with its more upright profile, and HQ for the driver’s side with its six-gauge instrument cluster. The fabrication was handled by the very talented Gareth Lougher, whose 6APEAL Torana (actually, it belongs to his wife Alison) we featured in SM, Apr ’13. The dash is painted in a candy apple red to contrast with the black exterior and complement the maroon leather trim that was expertly stitched by Jason Turner at World Custom Trim.

The final piece of the puzzle was the tray; a fairly simple piece you would think, but there are quite a few neat tricks to it. “My good friends Keith and Donna Richardson at NSM Sheetmetal helped me build it. We went with no headboard as we had smoothed out the back of the cab,” Happy says. The surface has square holes punched into it to allow airflow to the intercooler radiator and trans cooler, and for a modern touch, LED brake, tail and indicator lights were fitted. 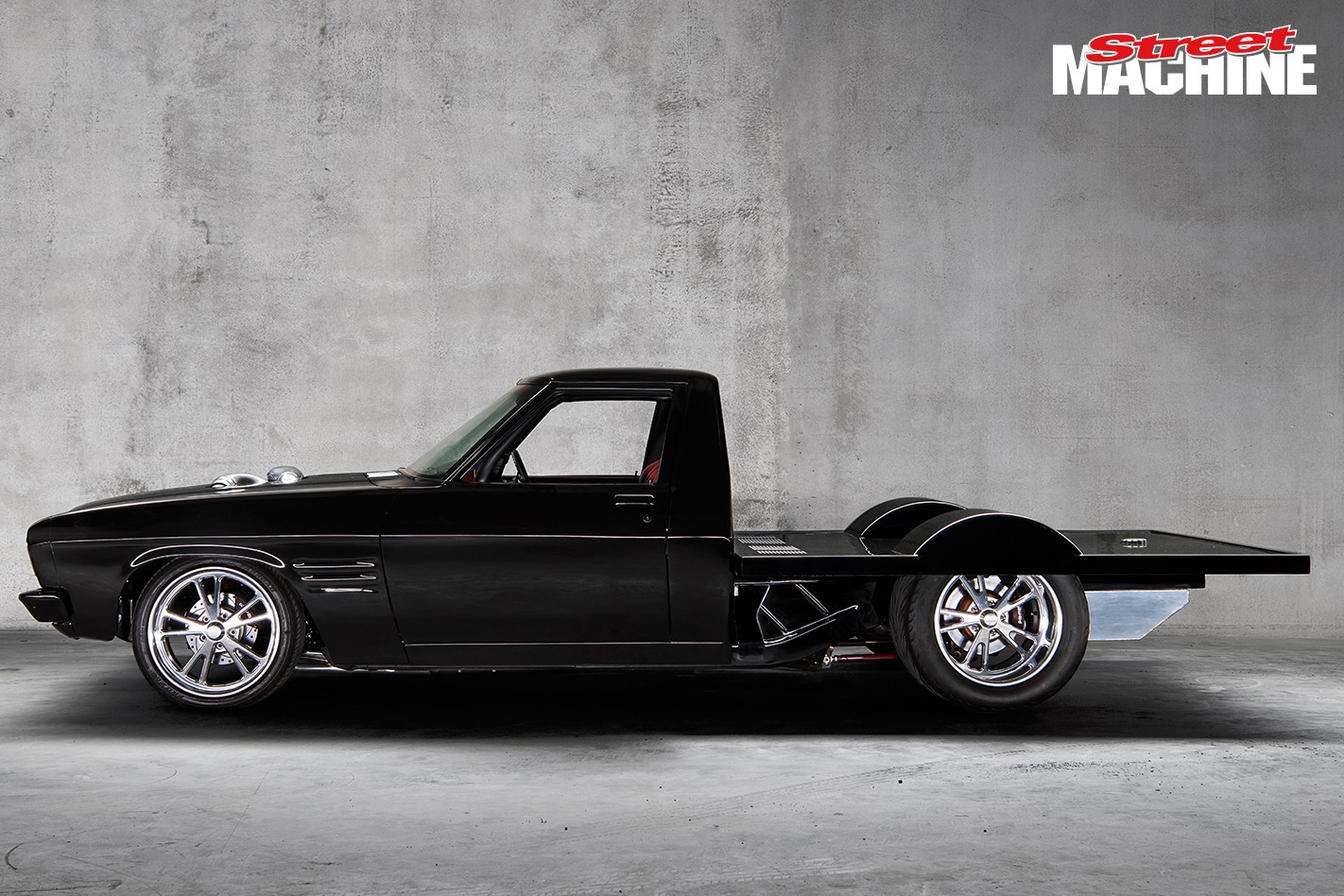 While we’ve focused on Happy’s Summernats success, the car actually debuted at Motorvation 30 over a year ago, and it was a mad thrash those last few days to get it completed in time. It all paid off with a Top 10 spot, Best Ute and Best Undercarriage. But that was just the start of the story. I’ll let Happy continue with the rest – better get your tissues out.

“Well, after going to Summernats a few times with great friends Donna and Keith Richardson (VANPYRE, SM, Nov ’15), we decided we should take our cars over and join in the fun. We started organising mid-year to try to get a head-start and be ready early for once, but as usual, this didn’t happen. “Life threw me the hardest times in the four months prior to leaving. In between some other large life dramas, my dad had fallen very ill, and wasn’t given long to live. Being my best mate and working on the car together all the time, this shattered me.

“Still having a car trailer to build, get the finishing touches done on the tonner and some dyno time was very hard, as I spent every morning with my dad talking about ideas, until he would kick me out and say: ‘Don’t waste your time in here with me, go and finish your jobs and get ready!’

“It was very hard to walk out of his room each day, although I looked forward to the next morning discussing all the progress I’d done. “If it wasn’t for great friends like Donna and Keith, Aaron, Grugg, Ollie, Nat and Phil giving me a hand – as they knew I needed it – I wouldn’t have made it.

“On the last day before we left we had a fuse box melt, a relay fail and charging issues. My stress went through the roof and I walked out of the shop and went to see my dad. We spoke about the dramas, and he settled me after I said: ‘I give up,’ and I wasn’t going. So I left Dad and went back to the shop and continued to work on it. With help from Corey at DC Auto Electrical we managed to fix it. Then we realised we’d better pack for the morning, finishing up at 12:30am! “We headed off at 7am so I could see my dad on our way. I knocked on his door and poked my head in and he looked up with anticipation and said: ‘Is it fixed?’ I said: ‘Yes we fixed it, it works perfectly!’ He straight away double fist-pumped the air with his last bit of energy. I sat and discussed it with him, watching him fade in front of me and then he said: ‘Go. Don’t be late!’

“I walked outside and lost it, knowing I would never speak to my dad again. He always pushed me to follow my dreams all the way until the end. 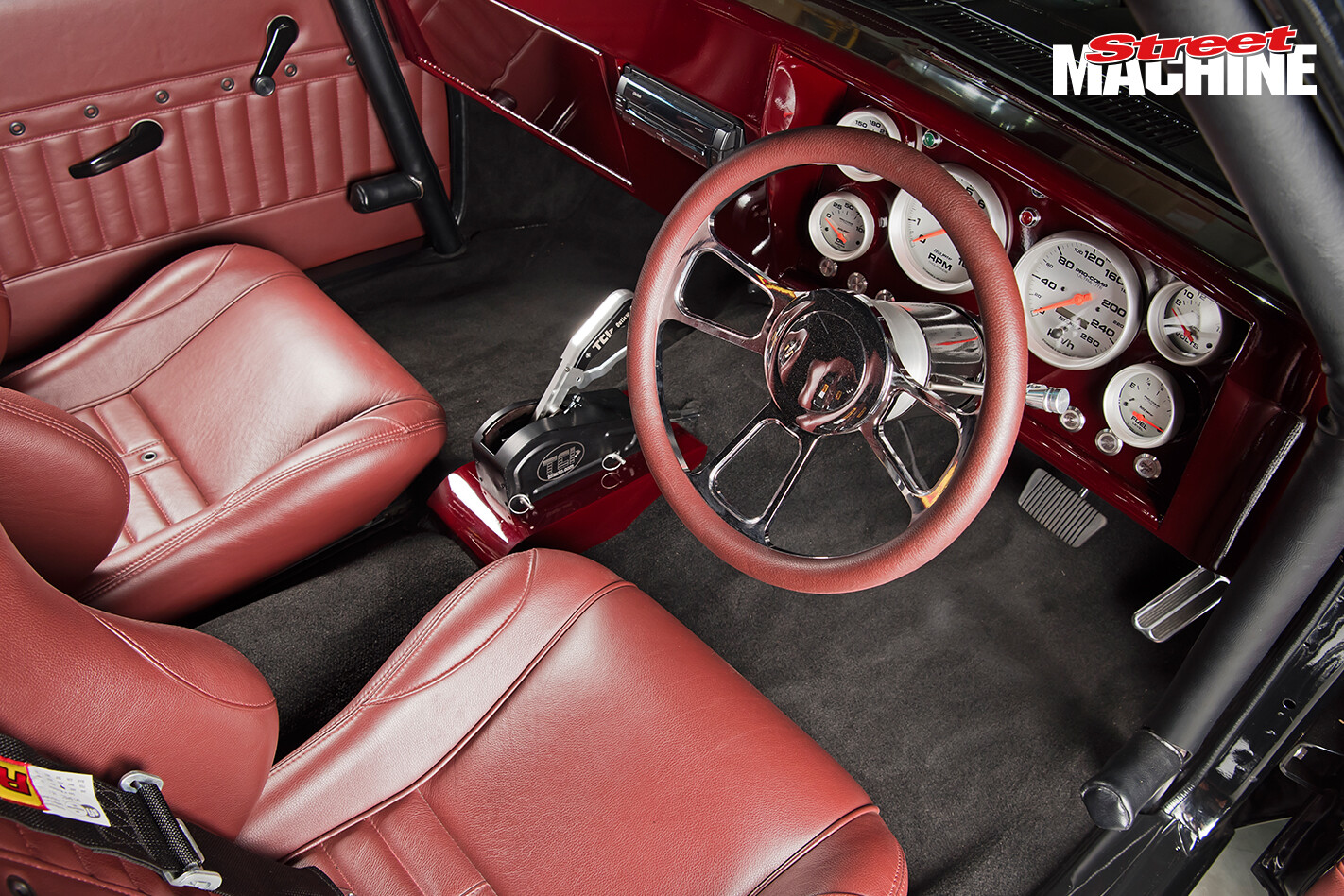 “My dad passed on the Monday when we just pulled into Renmark. It was the hardest thing not to turn around and be with my family, but he asked me to keep going if this happened. Now my purpose for going to Summernats was even greater. I wanted to celebrate his life with doing the best I could. 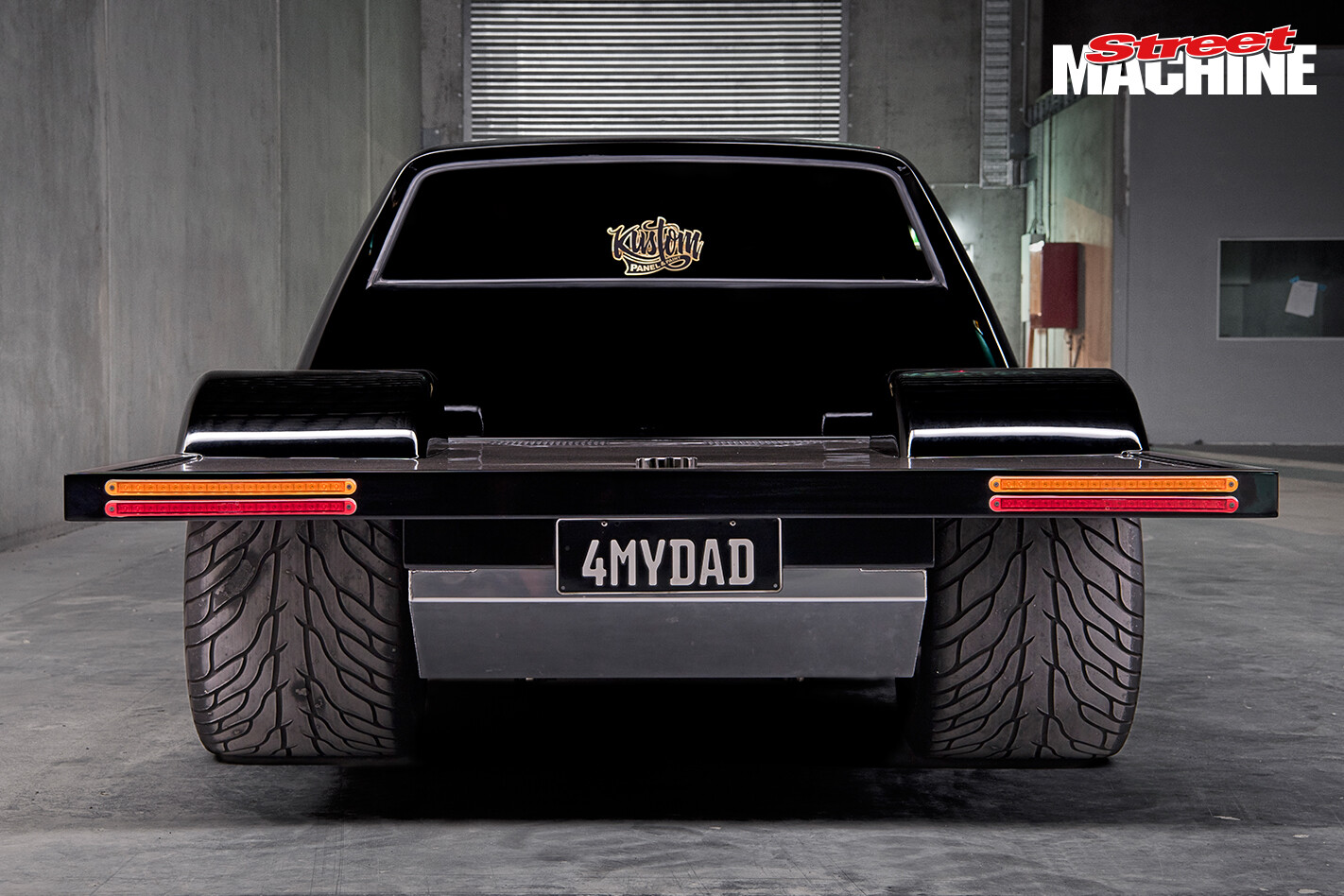 “Now we were in the Top 60, I had the chance to run for the sword. We managed to take out Top Pro Street as well. I was bouncing of the walls!

“Sunday came around and I was so nervous getting ready for the driving events. We went out for our drivers’ briefing, and looking at the stunning cars I was up against, I knew I had to win these driving events to have any chance of getting that sword. “First slalom run the nerves got me as I tested the track to see how sticky or slippery it was. Annoyed at myself, I had my dad telling me off in my head saying: ‘Drive smooth, mate. Smooth.’

“The second run went very well and I had relaxed. Then the go-to-whoa, and I was settled and had a ball racing the guys out there, and what a great bunch of guys – and girl – they were.

“Then the wait. I had been moved to the side and I then got a little excited saying to my friend Rie: ‘I think we came third!’ “We drove on the pad with the stunning BEARS32 hot rod and Tailspin. Then came the announcement. I couldn’t believe my ears when they read my name and number out. Was this a dream? I was lost for words, blown away. I couldn’t have paid better tribute to my dad. We won!

“I can’t thank Street Machine and Summernats enough for putting on such an awesome show. A credit to you, and I will be back next year.”