Some neat solo car action, but the balls-out demolition derby takes the cake in Grand Theft Auto – the classic purists are going to hate it!

WHEN poor-little-rich-girl Paula Powers (Morgan) breaks the news that she’s marrying regular joe Sam Freeman (Howard), her parents forbid their courtship and insist she marry the well-heeled, poloplaying dipshit Collins Hedgeworth (Linke). See, Paula’s dad Bigby (Cahill) is running for governor and has a ‘reputation’ to uphold, so his need for social status and building powerful relationships trumps any thoughts of his daughter’s happiness. 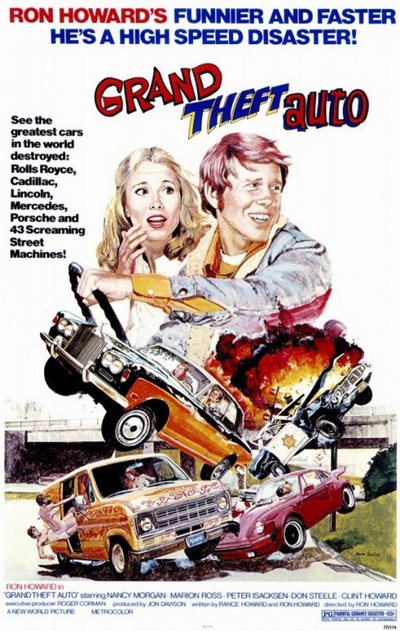 Bigby confiscates Paula’s car keys and sends her to her room in an attempt to stifle her feisty, rebellious ways. But within minutes she is out the window and commandeering Bigby’s classic Rolls for a whirlwind road-trip to Vegas, where she plans to marry Sam on her own terms.

As word breaks of the mad dash to lock down the nuptials, Collins assures himself that Paula’s been brainwashed by Sam and pulls out all stops to get her back. When his own efforts are compromised by various escapades, he contacts local groovy DJ, Curly Q Brown (Steele), and offers up $25K for Paula’s safe return; the motivation is doubled when Collins’s mum, Vivian (Marion Ross – Mrs C from Happy Days) throws in an extra 25 grand to guarantee that Collins will also be returned in one piece.

The chance for quick cash brings every reward-hungry scavenger out of the woodwork, and so begins a crosscountry crashfest, jam-packed with all manner of 70s-style shenanigans. Everyone from a travelling preacher, a pair of dopey mechanics and the ‘Vegas Muscle’ hit squad knuckle down for their shot at the kitty, wreaking considerable vehicular carnage along the way. 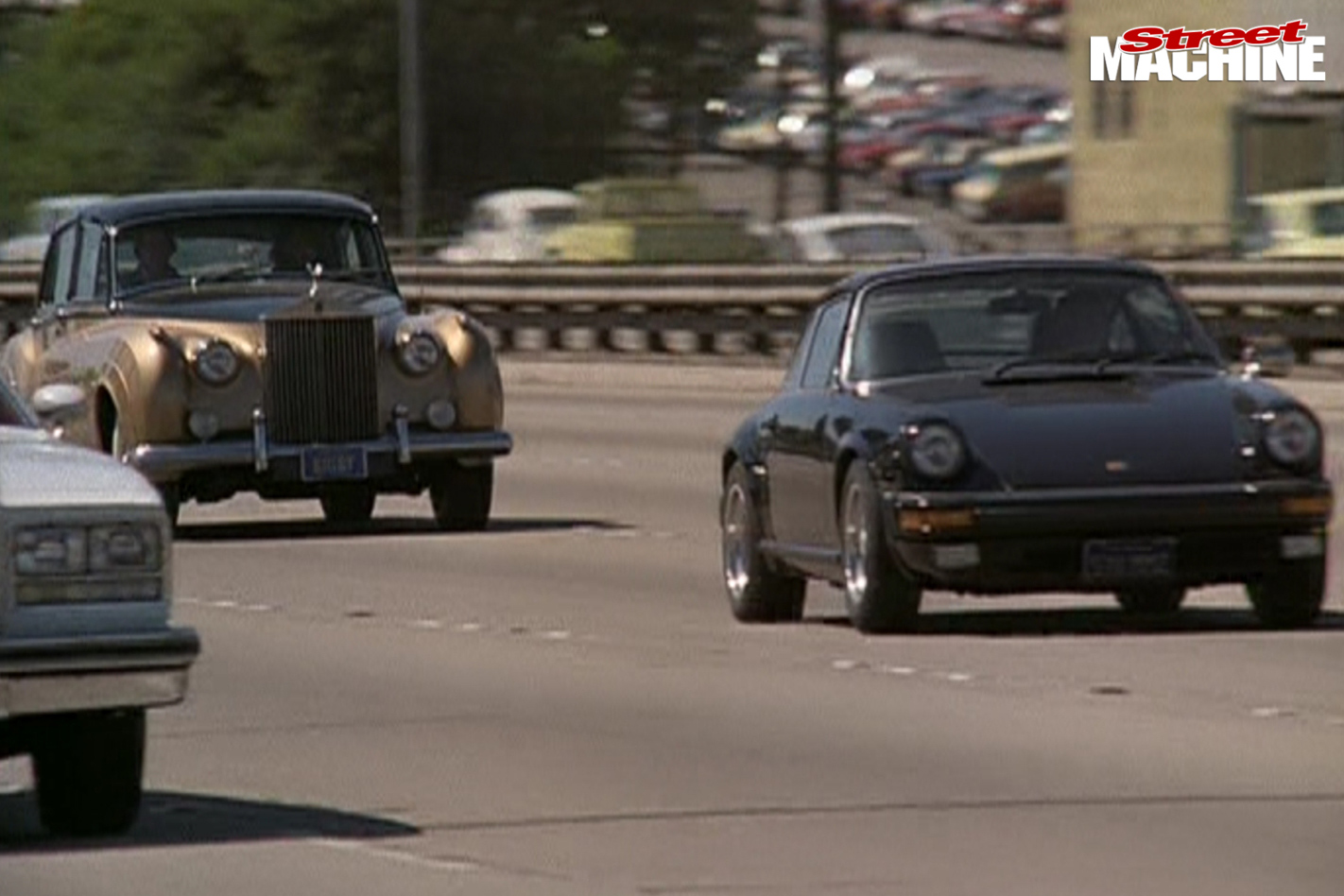 For the finale, Paula and Sam are funnelled into a local Nevada speedway where they – along with their pursuers – become embroiled in a championship demolition derby, ducking and weaving the unscathed Rolls through a pack of now-classic junkers as their dreams of making it to the altar appear to slip further away. 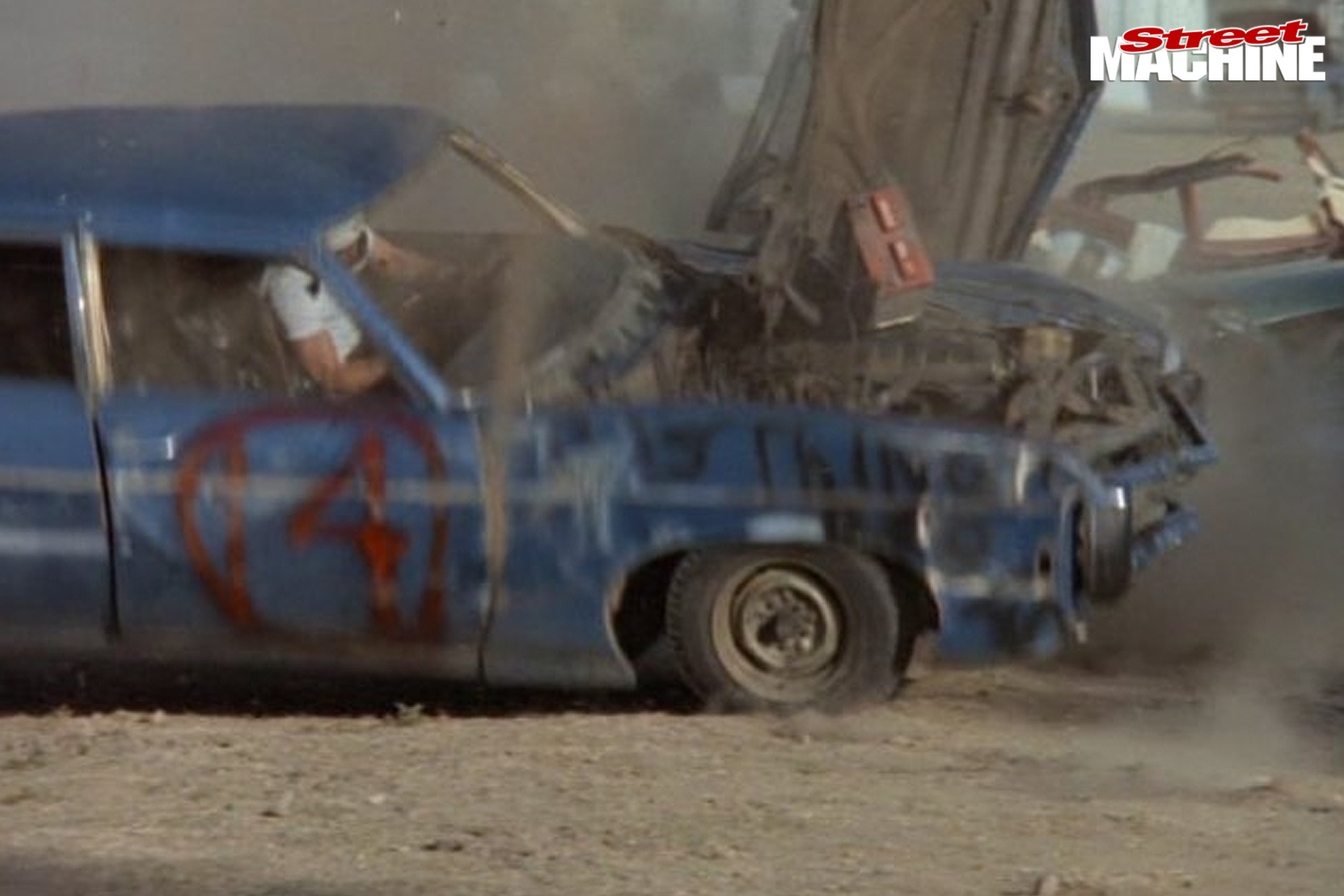 Grand Theft Auto is a quintessential 70s smash ’n’ crash action/comedy with numerous car stunts and explosions galore – dynamite must have been on special at the time of filming! It’s cheesy and fun, but doesn’t flow that well; it’s more a collection of wacky stunt skits with different villains, cobbled together to create a feature film. It was never intended to set the world on fire, but does have some great moments: Marion Ross as the foul-mouthed, bird-flipping, VW-driving maniac is a favourite; even at the height of her Happy Days success she clearly wasn’t going to let herself be typecast as a sweetie-pie Mrs Cunningham. The demolition derby is full of token Yank tanks and two-doors duking it out – cheap junk at the time – and I take great pleasure in knowing the modern-day (Wrecked-A-Classic) WAC jobs will be up in arms if they give this movie a shot. 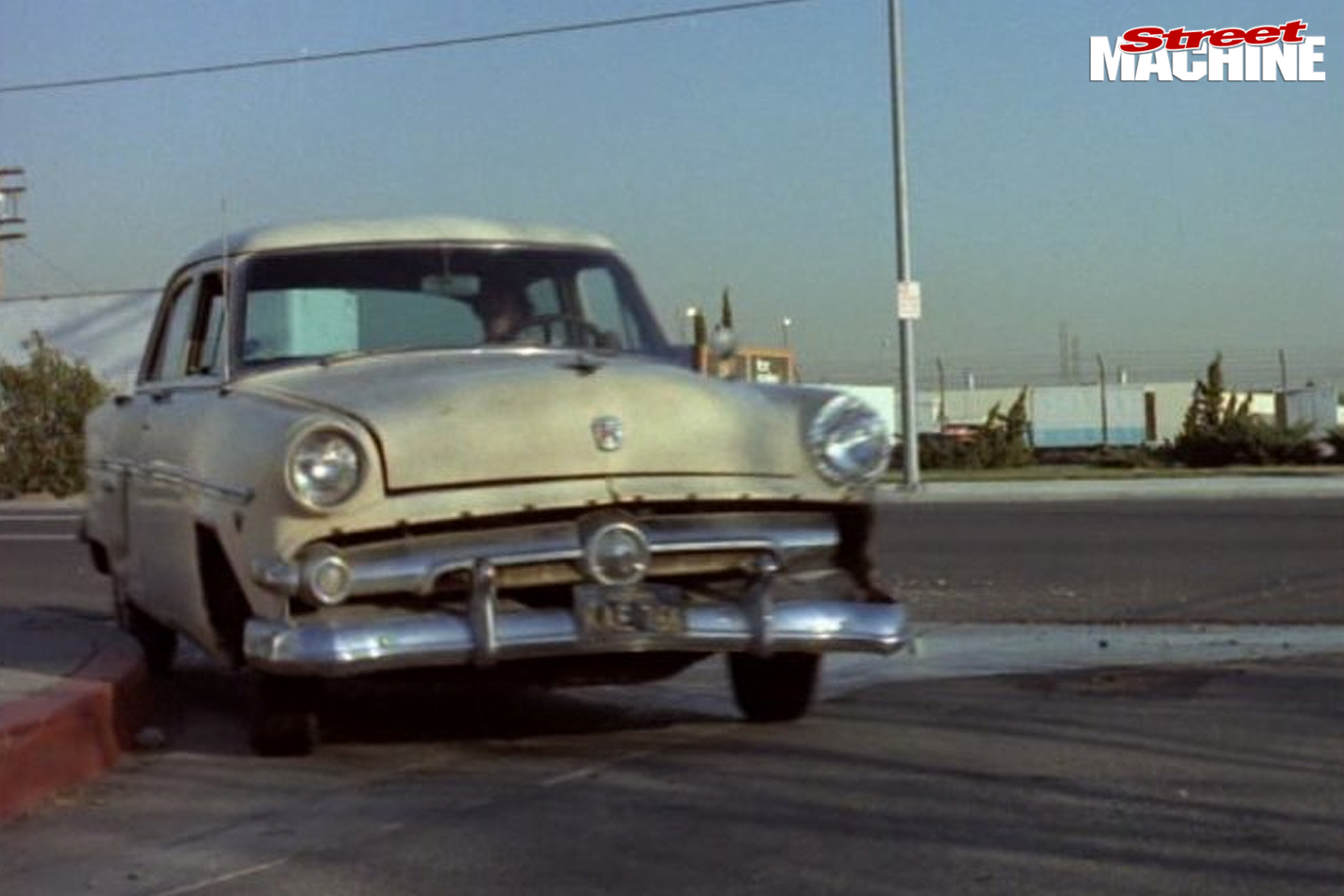 Grand Theft Auto was actor Ron Howard’s first shot at directing a full-length feature, kickstarting the then 23-year-old’s career at the helm of big-name future projects like Cocoon, Backdraft, Apollo 13 and the Academy Award-winning A Beautiful Mind. This flick is definitely not of the same calibre, but Howard managed to spin plenty of action and a few laughs from a measly production budget, and it’s a good option to square away for a cruisy, rainy-day watch. 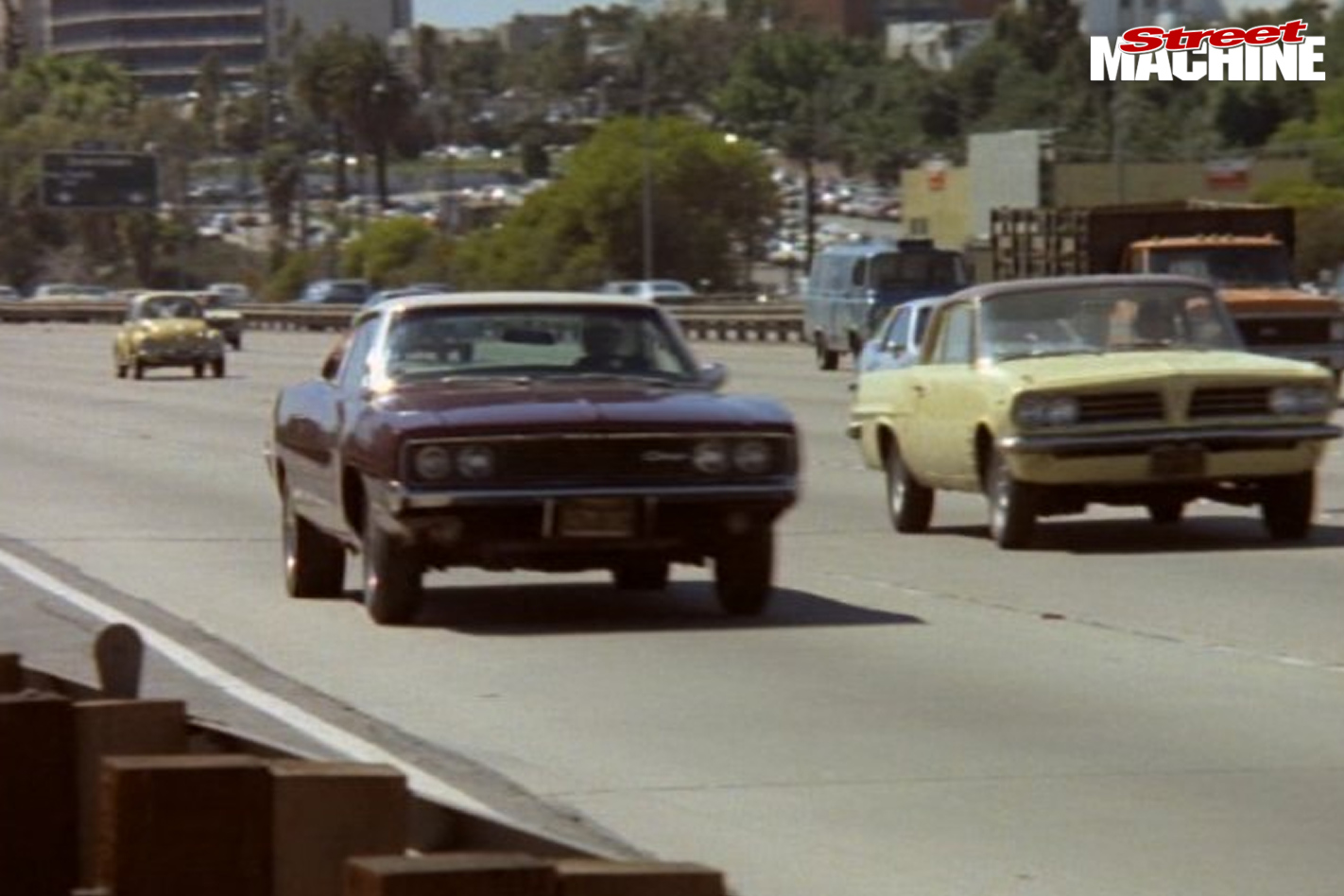 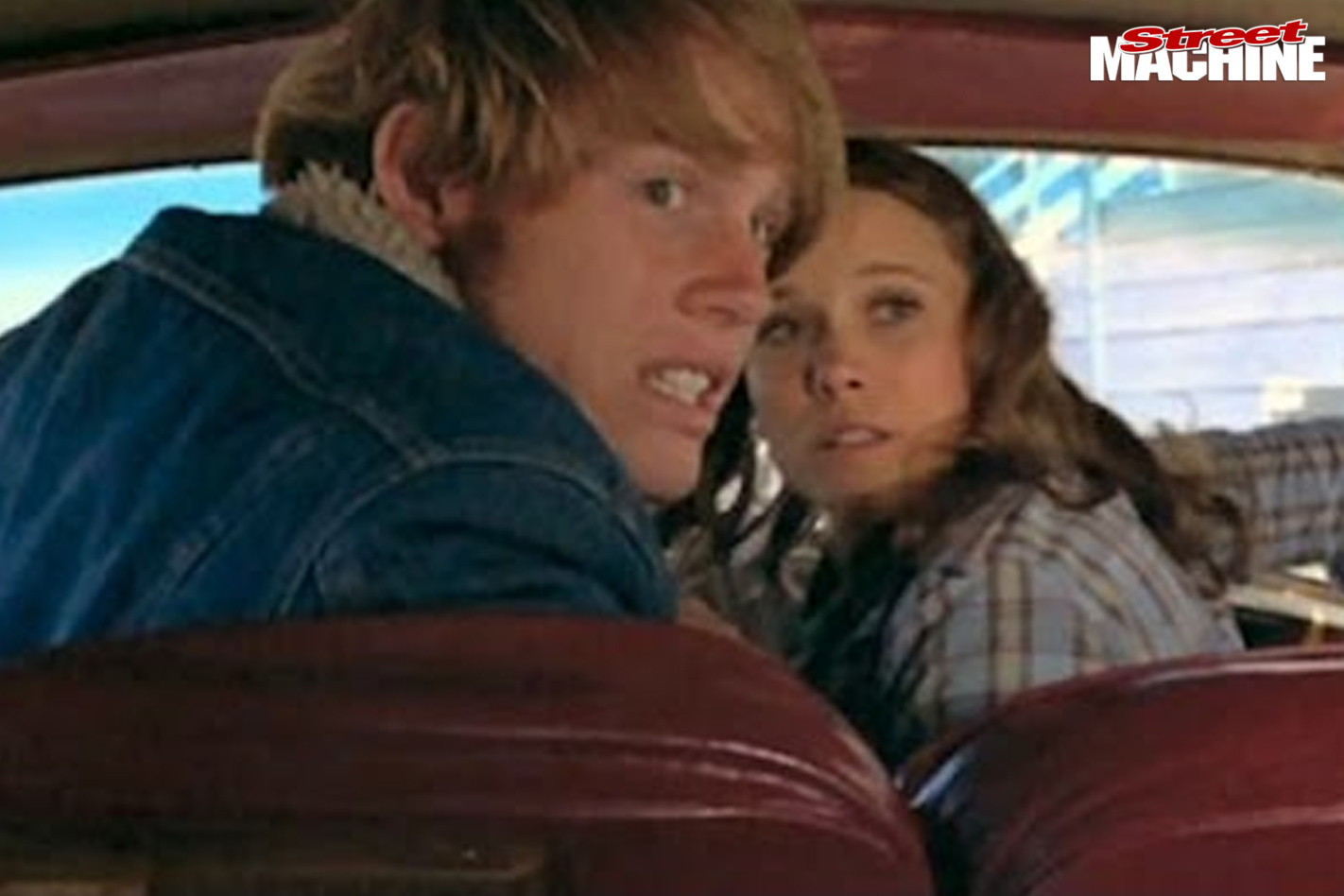 ACTION:
There’s some neat solo car action, including a drifting limo and a jumping cop car fireball, but the balls-out demolition derby takes the cake – the classic purists are going to hate it! 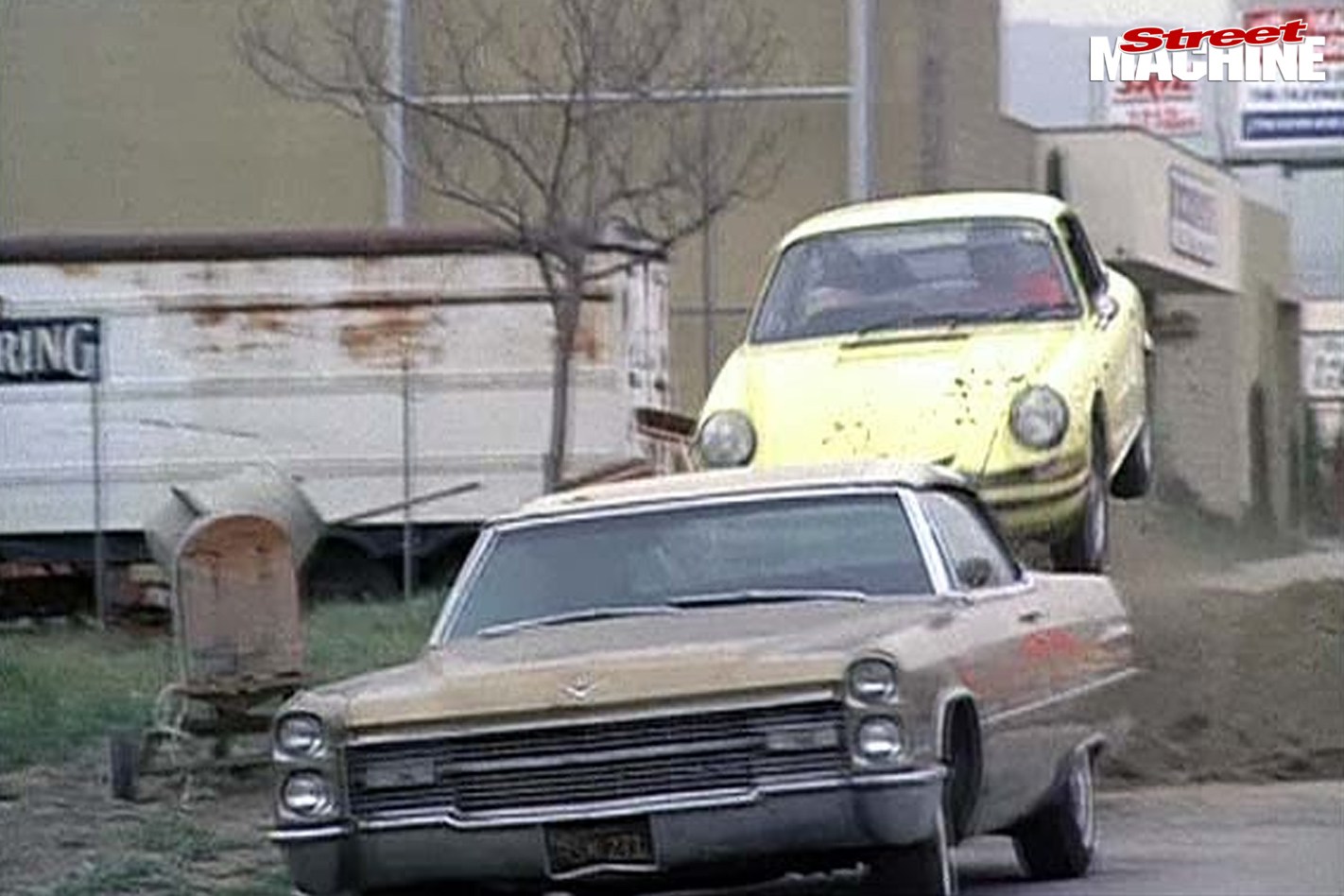 PLOT:
Two lovestruck teens steal a Rolls-Royce and hit the road for a Vegas wedding, to escape family expectations and a jilted ex-fiancé

COOL FLICK FACT:
Ron Howard got the opportunity to direct this film in return for taking the lead role in 1976’s Eat My Dust (Fanging Flick, Jun ’15)