WHERE ARE THEY NOW? GREEN KNIGHT HG PANELVAN

In the days when more was more, Greg Hocking's Green Knight proved that a van with subtle but perfectly executed mods could be a winner

ICONIC cars earn that status for different reasons. It could be the driveline, colour or even the name, but for some it’s just because they were plain tough. While it was rare for a panel van to set the world on fire grunt-wise, Victorians seemed to have a better handle on it than most. Steve Abbott’s Vanrat and Stephen Ellis’s XX308 were two that mixed clean, showy looks with a need for speed, and rubbing shoulders with this pair was Greg Hocking and his HG panel van, Green Knight. 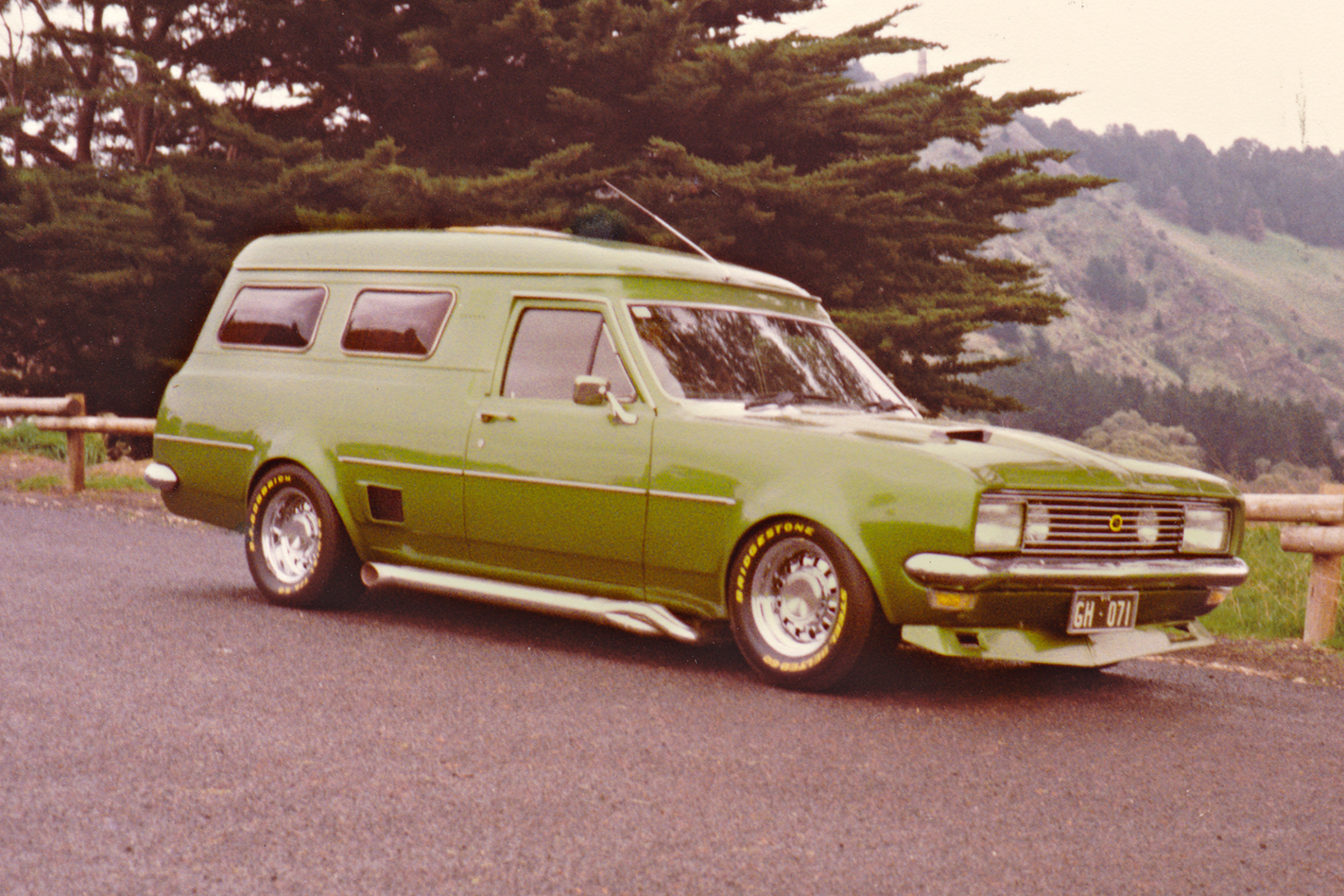 “I’ve always been into tough cars,” Greg says. “When it came to panel vans it was all about the stance and the drivelines; murals, fibreglass and cocktail bars were never my thing.”

It was 1975, and 17-year-old apprentice Greg was shopping for his first set of wheels. “My mates owned panel vans and they were really coming into their own as a lifestyle choice. I found a white HG owned by a doctor in Swan Hill who was using it as a farm hack – I think he used to haul bodies around in it,” Greg laughs. “It cost me $1900 and was a bit of a rarity as it was fitted with a 202 red motor – it was one of the last HGs so was built just as
Holden was phasing production into the HQ. My dad was a boilermaker so was handy on the tools, and between the pair of us we got busy hotting it up before I got my licence.” 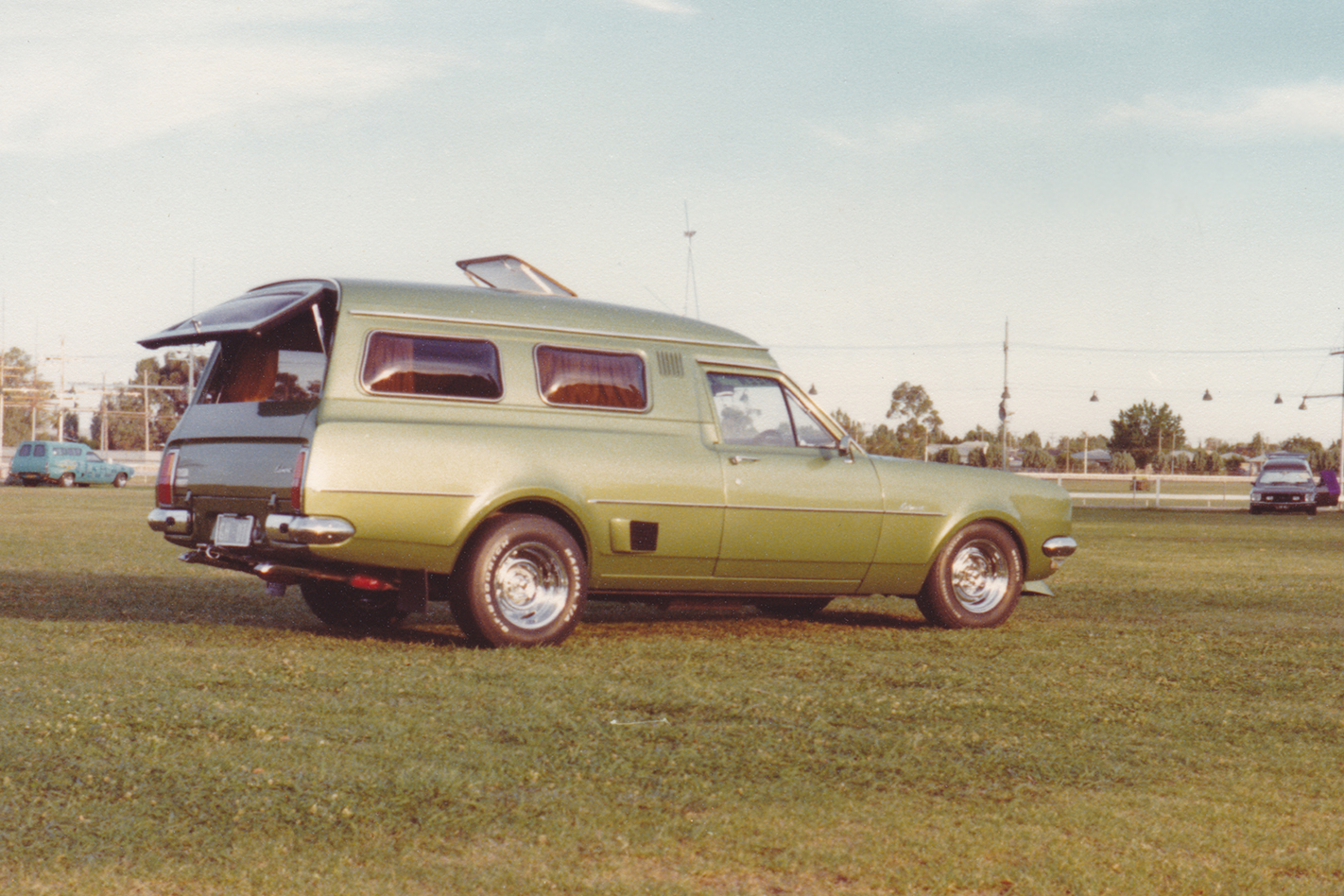 The plain white paint was never going to cut it, so Greg started hunting for an appropriate green – the unusual hue he eventually settled on would become the cornerstone of the van’s identity. “I loved green but there weren’t a lot of standard colours around to choose from. This was based on a Valiant colour with some extra gold thrown in. It was sprayed by John Cowley of Aljohn Panels who laid on multiple coats of Dulux green and clear.”

With fresh paint and chromies on the back, Greg was on the road in true 70s P-plate fashion. But it wasn’t long before a new round of mods were needed, so a chrome tube grille, XA bonnet scoops and Premier bucket seats found themselves a home, while bubble windows and a chin spoiler were added along with Falcon side vents. 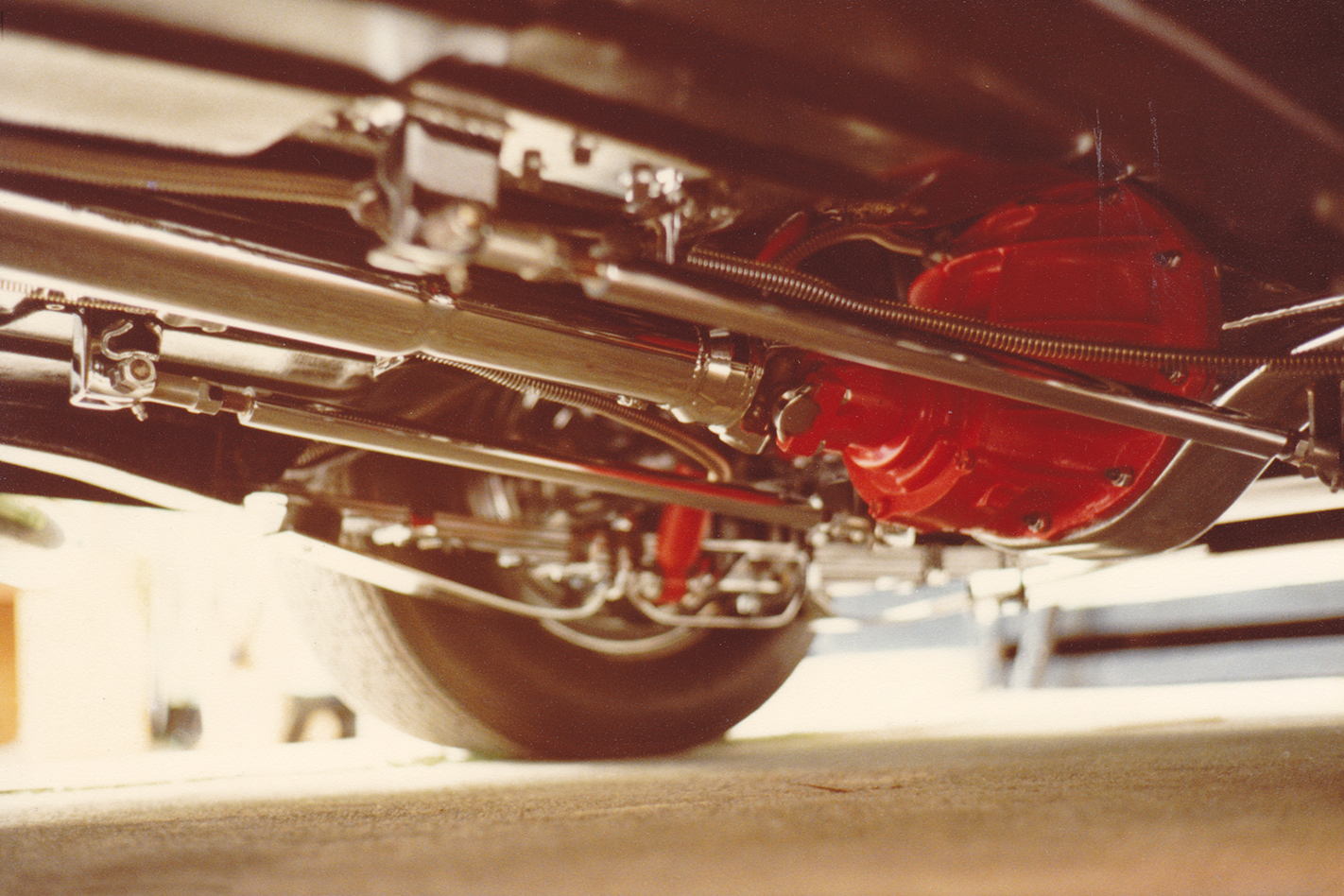 “The wreckers were full of goodies back in those days and I bought a 327 small-block Chev out of a Monaro,” Greg says. “We pulled the six-cylinder out on a Friday night and had it finished to drive to work as a V8 on Monday morning. The three-on-the-tree had to go, so I picked up a Muncie from an importer in Dandenong. It took me six transmissions to find one that was any good, so I got pretty handy at swapping them out!”

By now, the show bug had bitten Greg hard, so these mods weren’t enough to satisfy him for long. “The van was stripped down for a complete rebuild and this is where more of the significant body changes came into play.” 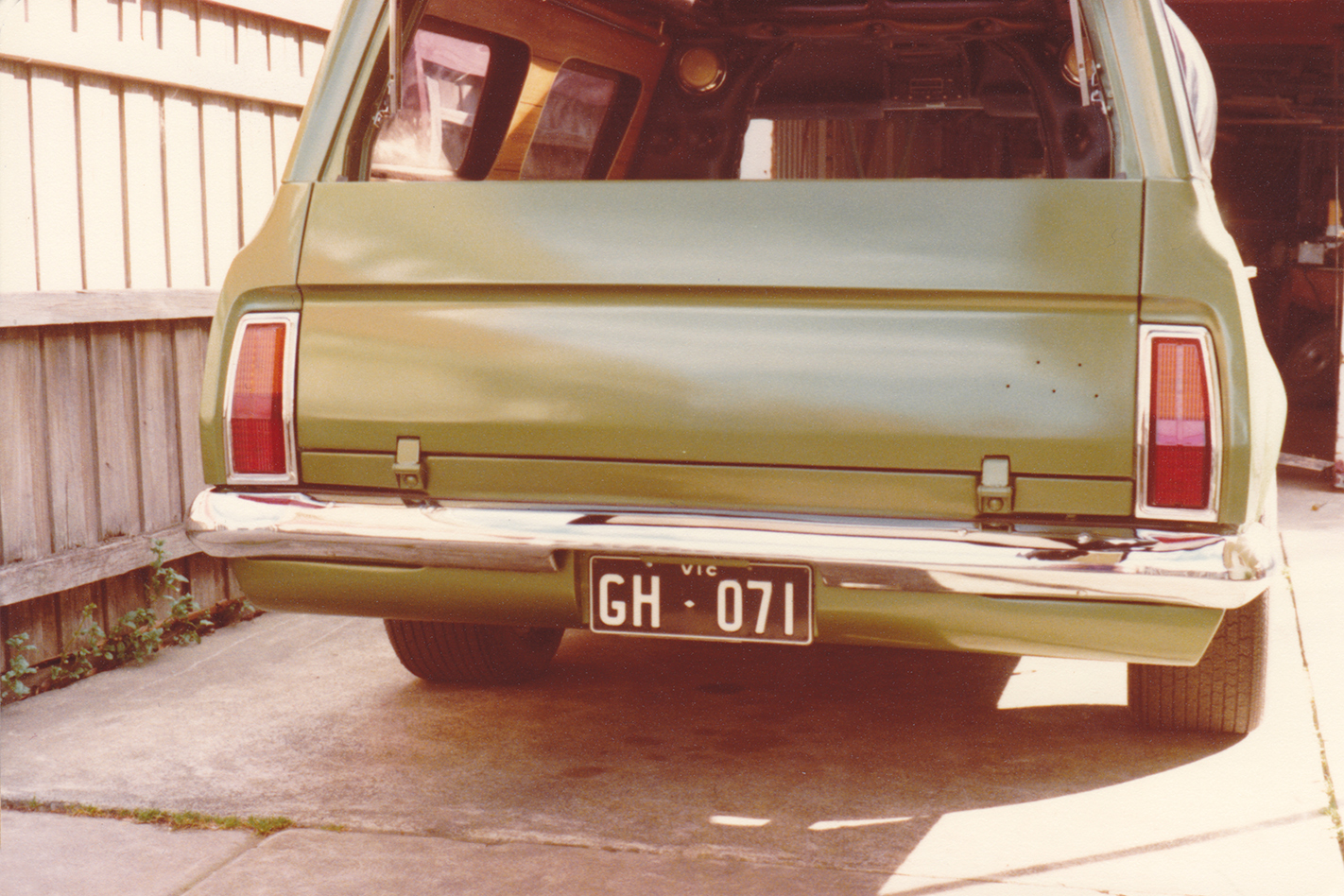 Greg was one of the first to fit then-new XC Fairmont headlamps, while an XC GXL bonnet graft replaced the XA scoops. A new rear pan was whipped up to form one of the most attractive HK-T-G tail treatments you’re likely to see; the effect is subtle but adds to the tough-arse stance.

“As a sparky we were always fooling around with sheet metal for switchboards, so I rolled up a new pan and lengthened and lowered the rear quarter panels to better balance the wagon rear bumper.” 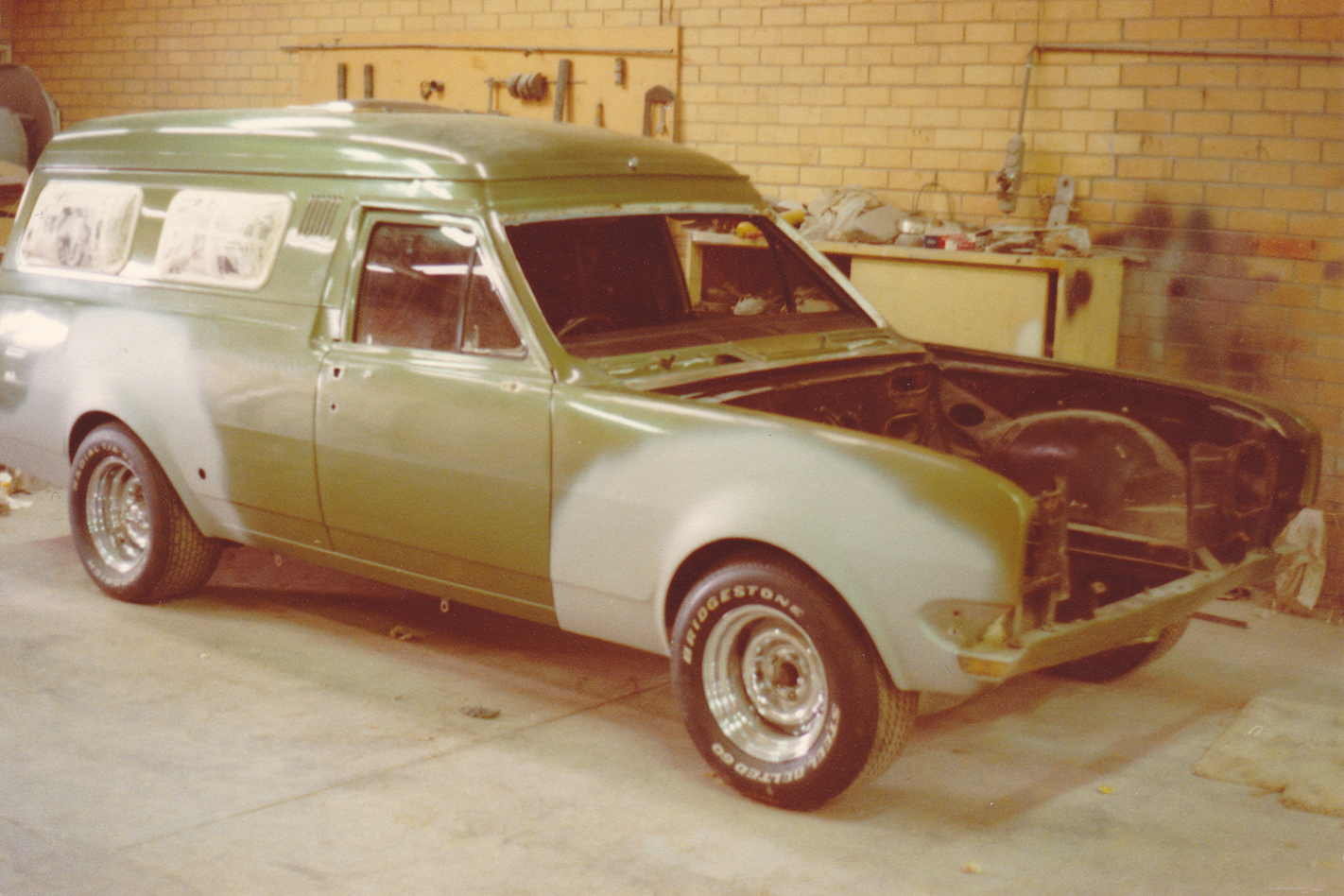 Essendon metalworking guru Neil Pomeroy weaved his flared-guard magic on Green Knight. Check out the pics – the proportions are spot-on, and remember, they were hand-formed in steel. “He charged me $200 a guard and it was worth every cent,” Greg says. “It wasn’t long before he was charging 5-600 bucks a guard, such was the quality of his work.” 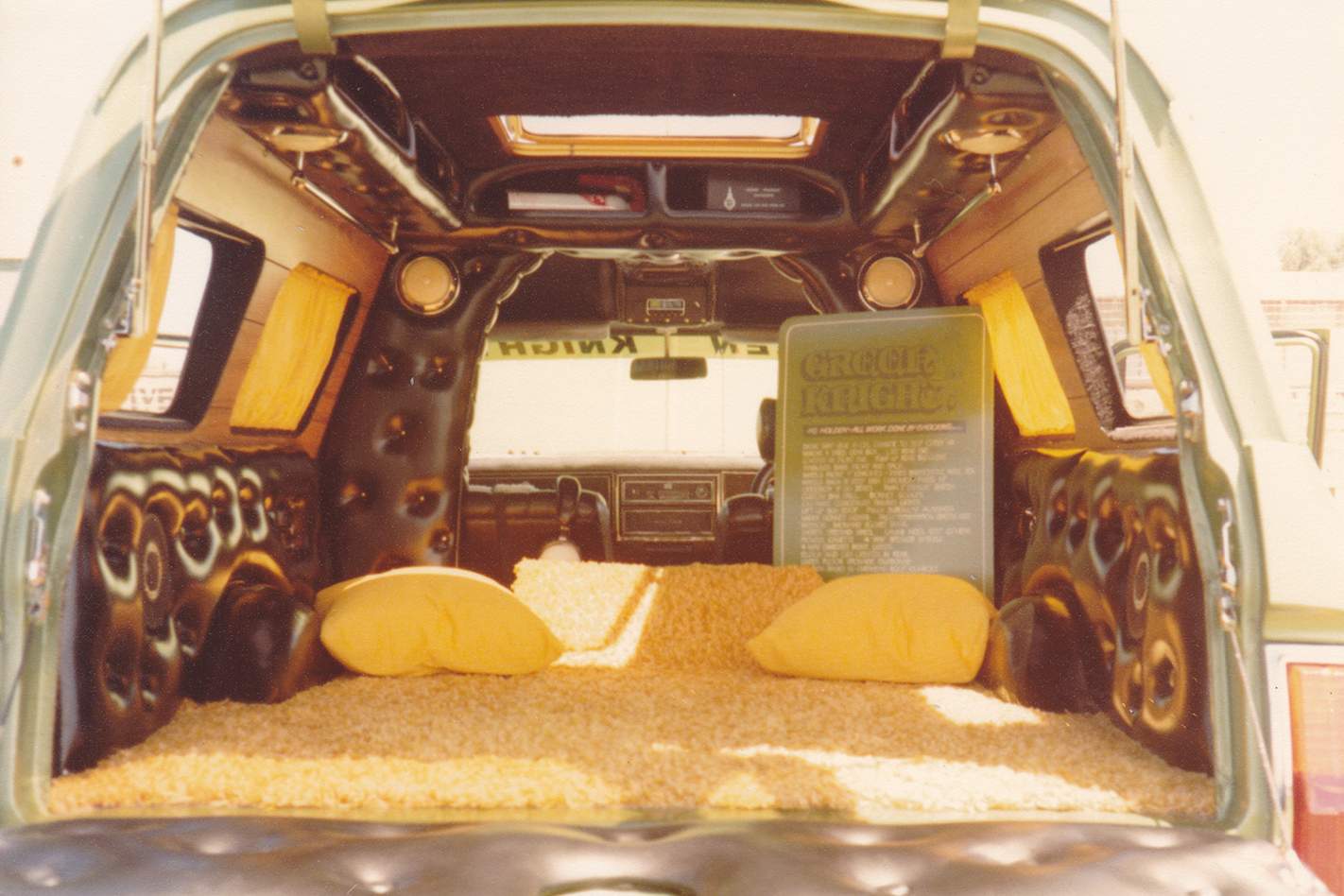 The rear was decked out in a combination of black leather and American cedar. A false panel in the cargo floor lifted to reveal a relocated battery and custom fuse panel

The rear interior fit-out was completed by Greg in black leather and American cedar, while a mate trimmed the front seats and doorcards in velvet. The colours and style are very much era-correct and indicative of what was hot back in the day. 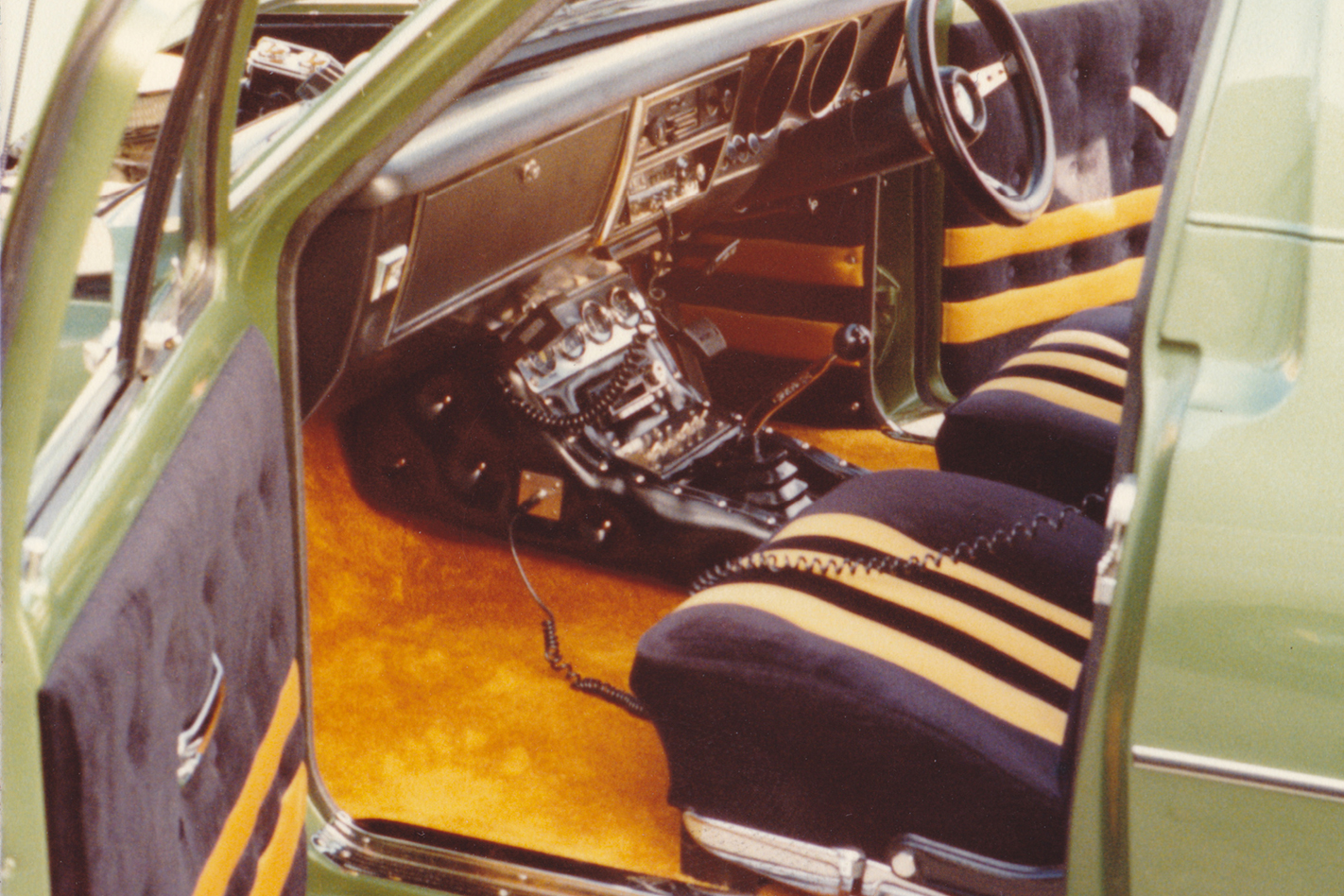 Electrician Greg used his trade skills to incorporate a custom loom and fuse panel under the rear floor and Brougham electric windows up front. A Maxrob sports wheel and Hurst floor shifter completed the package. 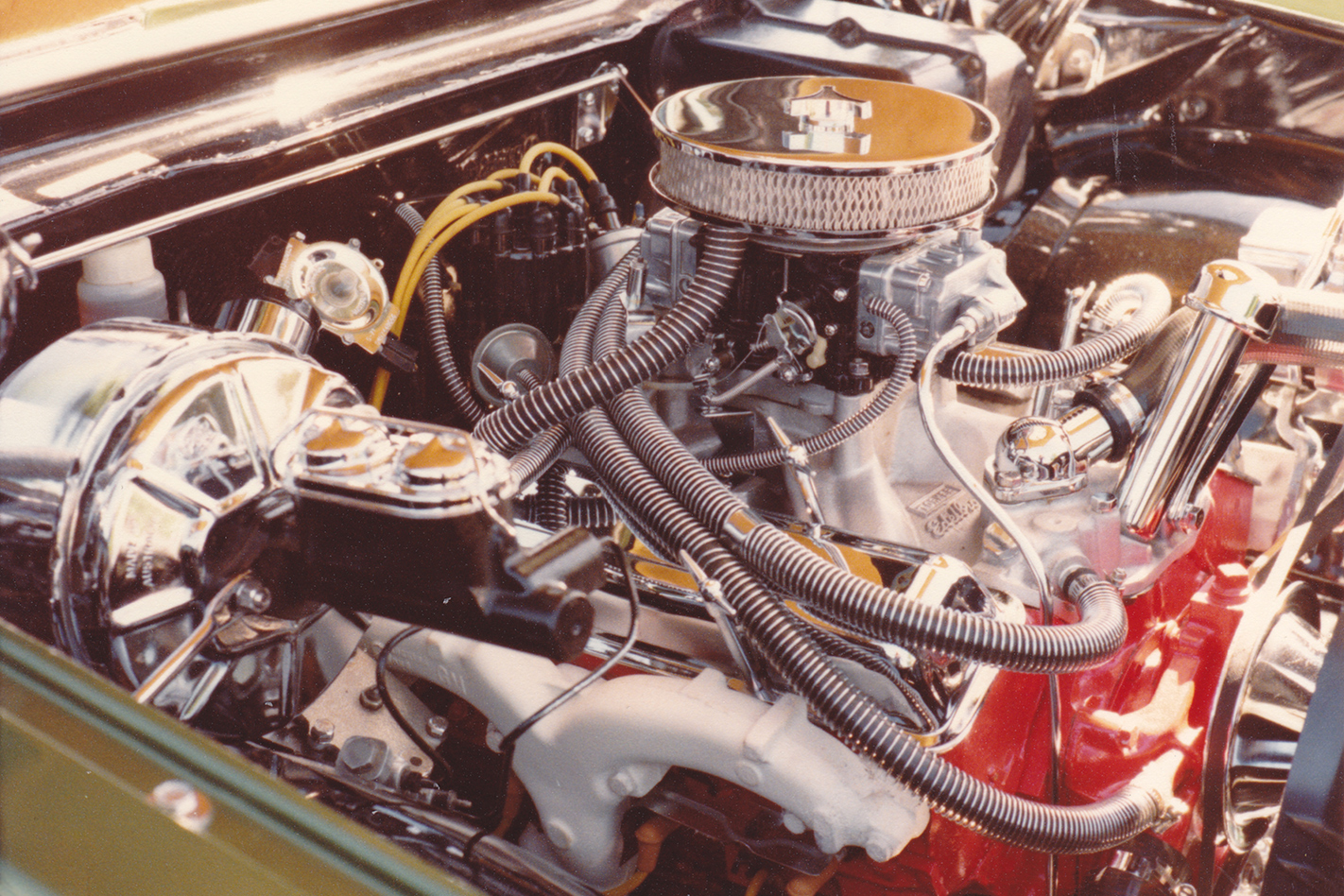 The 327 scored a rebuild, too, including high-comp TRW pistons and a three-quarter race cam, while the fuelie heads were shaved, ported and polished, and topped with a 650 double-pumper on an Edelbrock intake. The Muncie remained, while a chromed and shortened nine-inch diff was located by custom-made adjustable tramp rods. 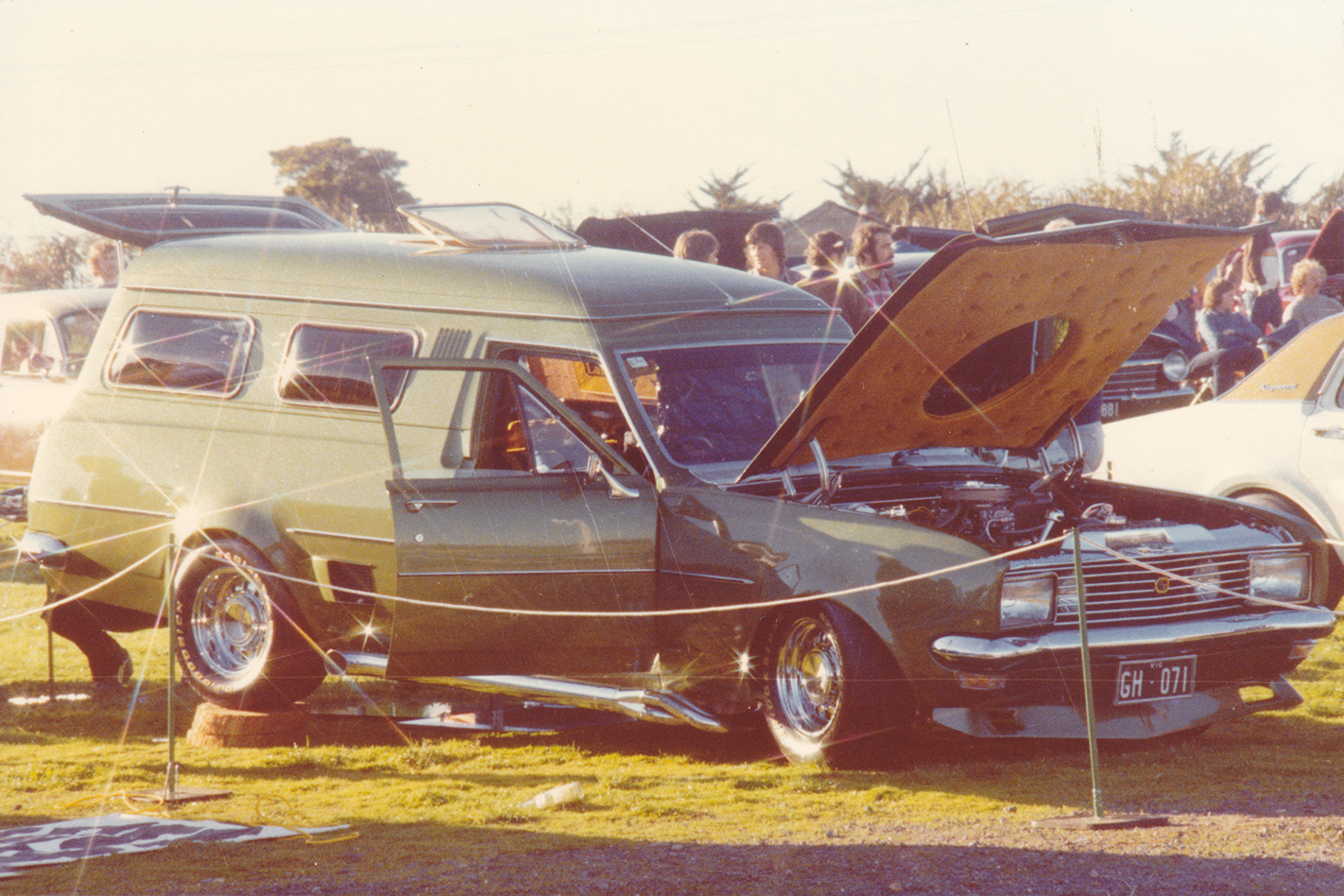 Australia's Top Van for 1979, Green Knight wowed the judges with a mix of subtle mods and extensive chromework and detailing

By 1979 the van was back on the road – literally; it was never trailered – and cleaned up in the trophy department at many local and interstate shows. An Australia’s Top Van gong at the 1979 Van-In held at Mildura was its crowning achievement.

“It got to a stage where doing any more mods would have spoilt it – the only real change was fitting a set of 12-slot rims in 1980,” Greg says. 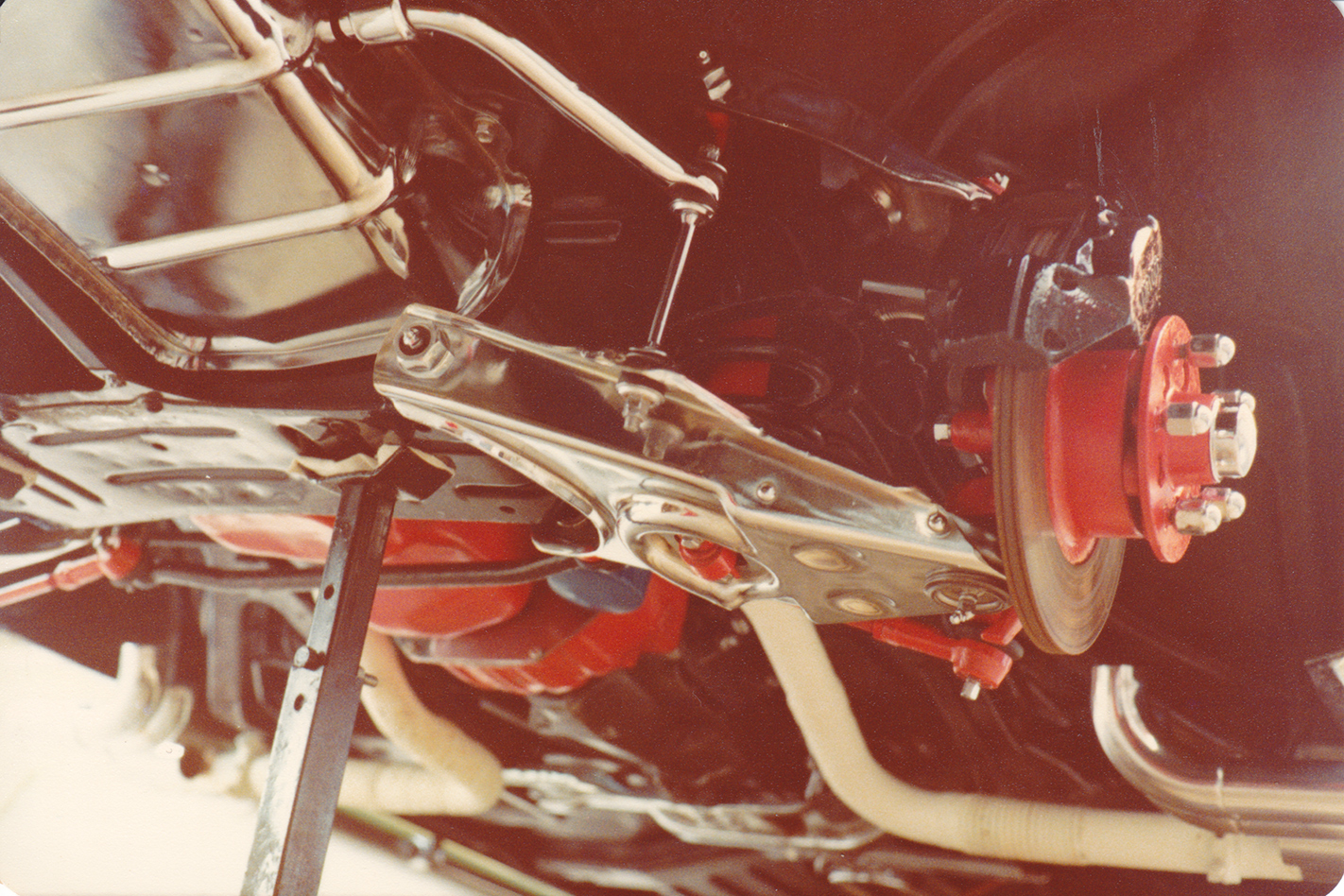 By 1982, the wild custom era was coming on strong and cracks were starting to appear in the strength of the Australian van movement. “Full custom vans were never my thing,” Greg says. “XX308 was probably the only van I ever liked with a fibreglass nose, as it was true to its low, wide and mean Trans-Am racer looks. It was by far one of the coolest vans ever built and looked and sounded so tough. But times change and I think I’d just grown tired of cleaning and polishing the HG. I sold it through a car yard in Fawkner and the last I heard the new owner pulled the motor out to repower a ute. And that was it. I’d definitely be interested to find out what happened to it.” 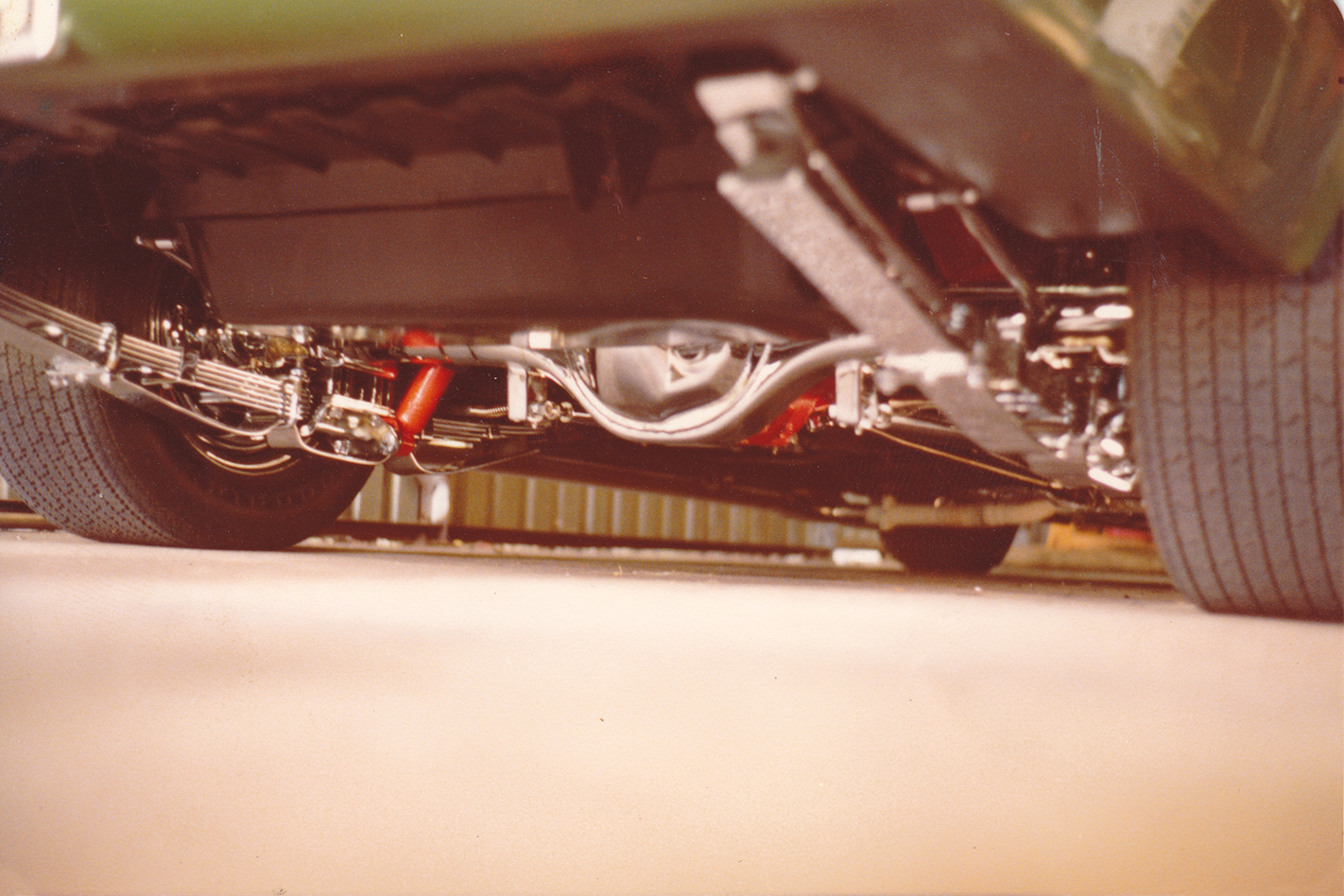 The love of tough cars never waned for Greg, though, and by 1984 he had bought himself a 1967 RS/SS Camaro, which he still owns today.

“My son Bryce is 18 and warming to the van scene and is pretty keen on a Bedford. Bernard Marten’s Mandingo Beddy was another favourite of mine so we may be able to add a few custom touches if he goes down that path. 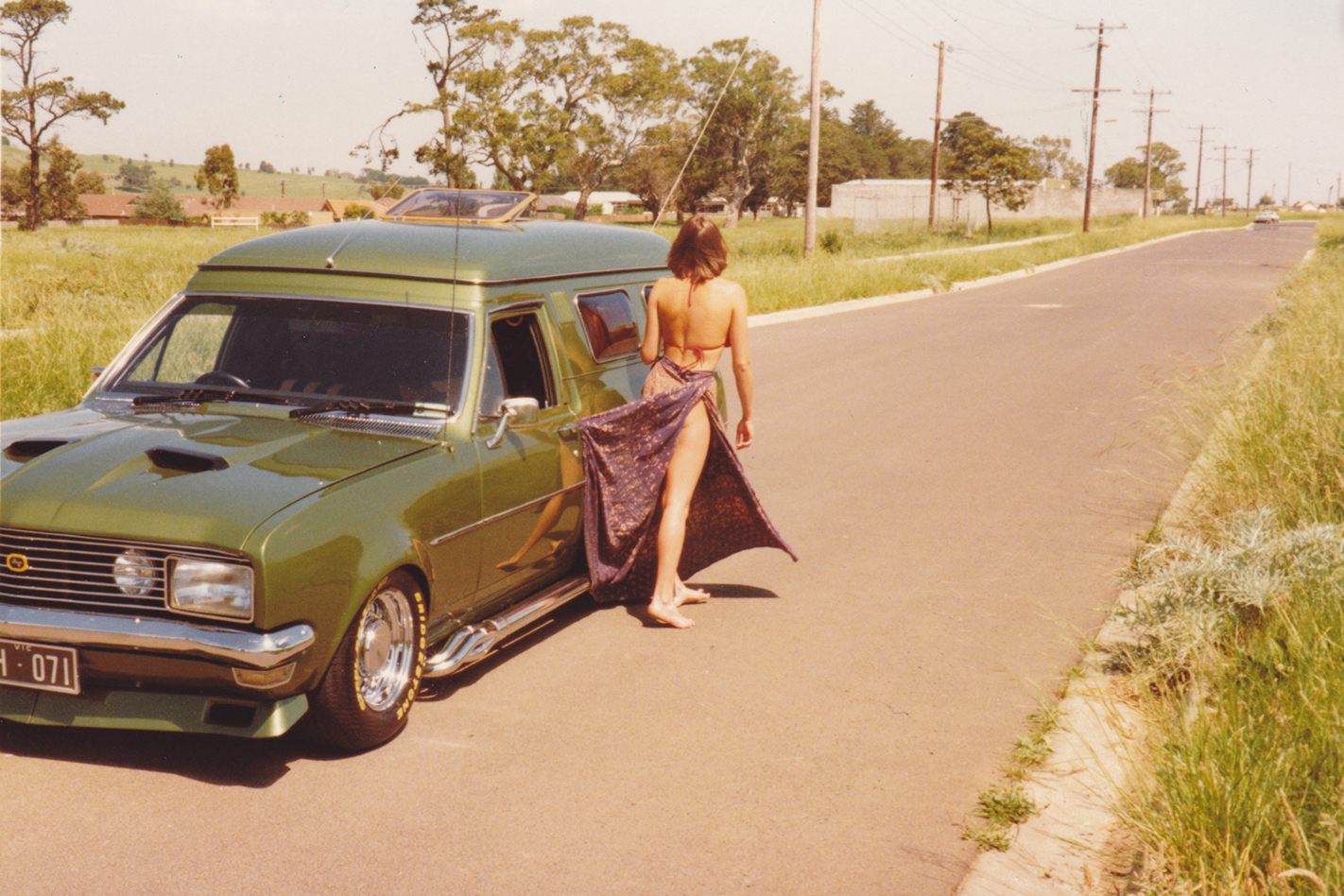 “The vanning days were a lot of fun and I’ll always remember them fondly,” Greg concludes. “It was an innovative time for the local car scene. We were toying around with a truly Australian body style so were mostly guided by what was happening here; the US influence was more about what tricks we could do to our vans mechanically. Vans have been missing from our streets for so long now, I often just wonder whatever happened to them all.”