How to fit an LS engine into just about anything

IF THERE is a popular rear wheel-drive car out there, someone somewhere has chucked an LS engine into it. When it comes to light, cheap, compact high-performance engines with excellent aftermarket support and easy upgrade potential, they’re hard to go past. 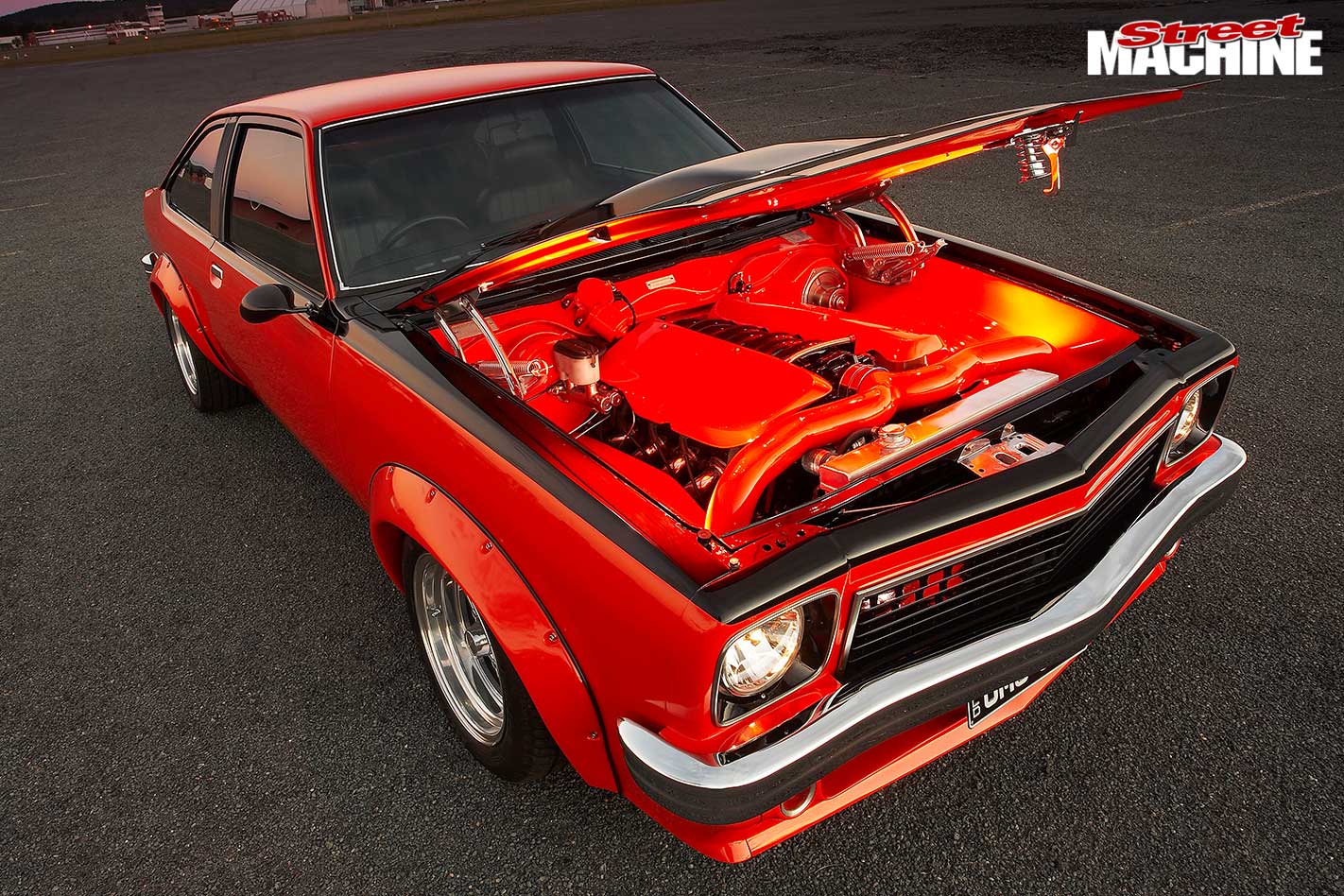 Tim Johnston at J’s Customs built this slick UC hatch (disguised as an LX) for his brother Simon, complete with LS1, T56, Subaru power steering and big brakes all ’round

The most popular homes for lonely LS motors are in GM cars, particularly Chevs and their Buick, Olds and Pontiac brethren. There are countless conversion kits available from the US and Australia, from companies like Detroit Speed, Holley and even GM Performance, which offers a complete plug-and-play kit with its new LS crate motors.

Aussies have also taken to stuffing their 60s, 70s and 80s Holden engine bays with modern Chevy power. By far the most popular are HQ-WBs and first-generation Commodores, as they’re more easily legal in most states and fewer modifications are needed to fit them. 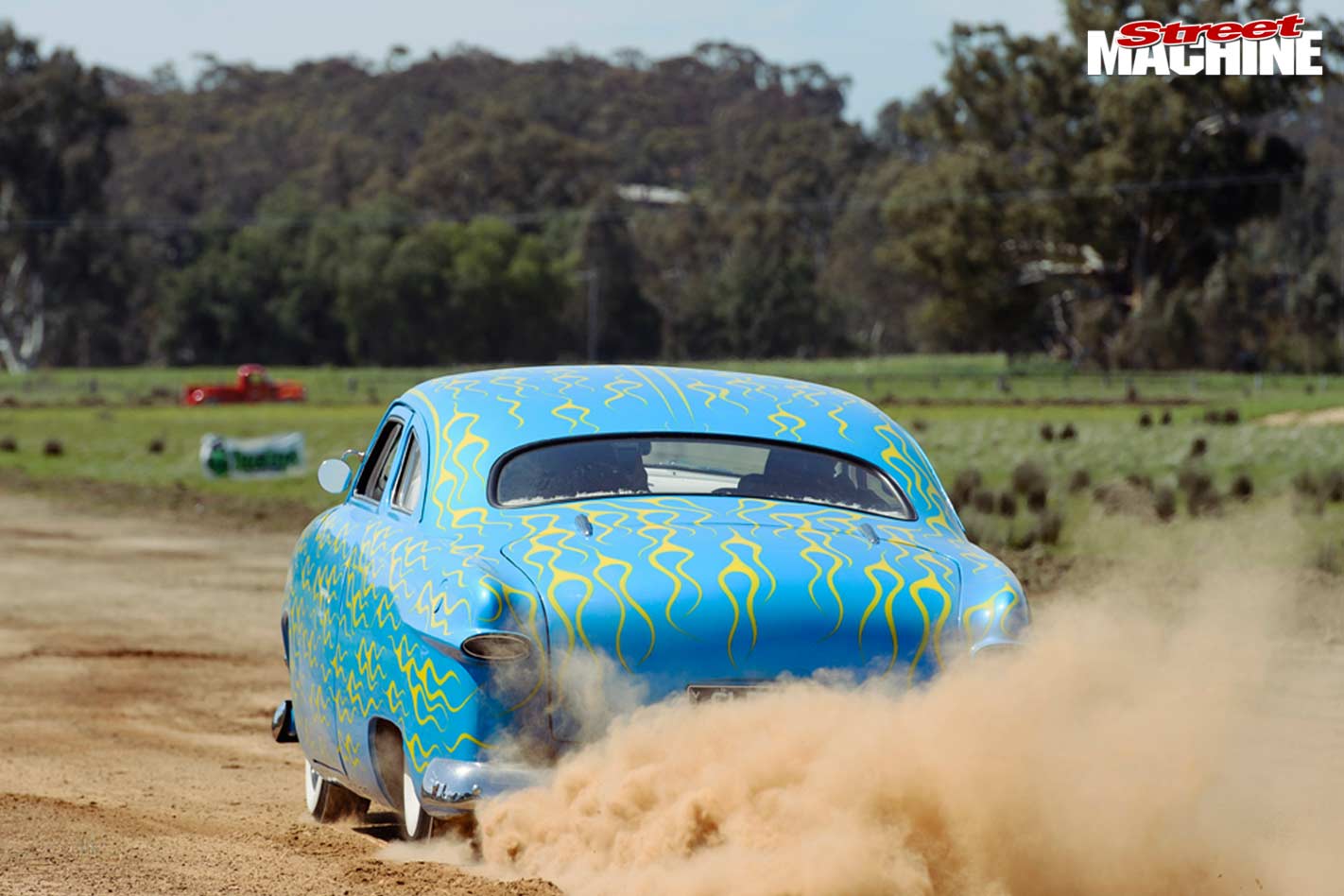 Aftermarket exhaust headers can be sourced for almost all popular American GM platforms, and the same is true for HQ-WBs and early Commodores. You can also find bolt-in EFI-ready fuel tanks for most US muscle cars from Rick’s Stainless Tanks, meaning you don’t have to cut your original up to fit the later-model pump.

Things get a little harder when it comes to LS fuel rail set-ups. Some 1998-2002 Camaro and ’99-on Corvette LS1 engines (and all VT-VY Commodores) don’t run fuel return lines, so you may need a different set of rails and pressure regulator depending on which engine you fit to which car. 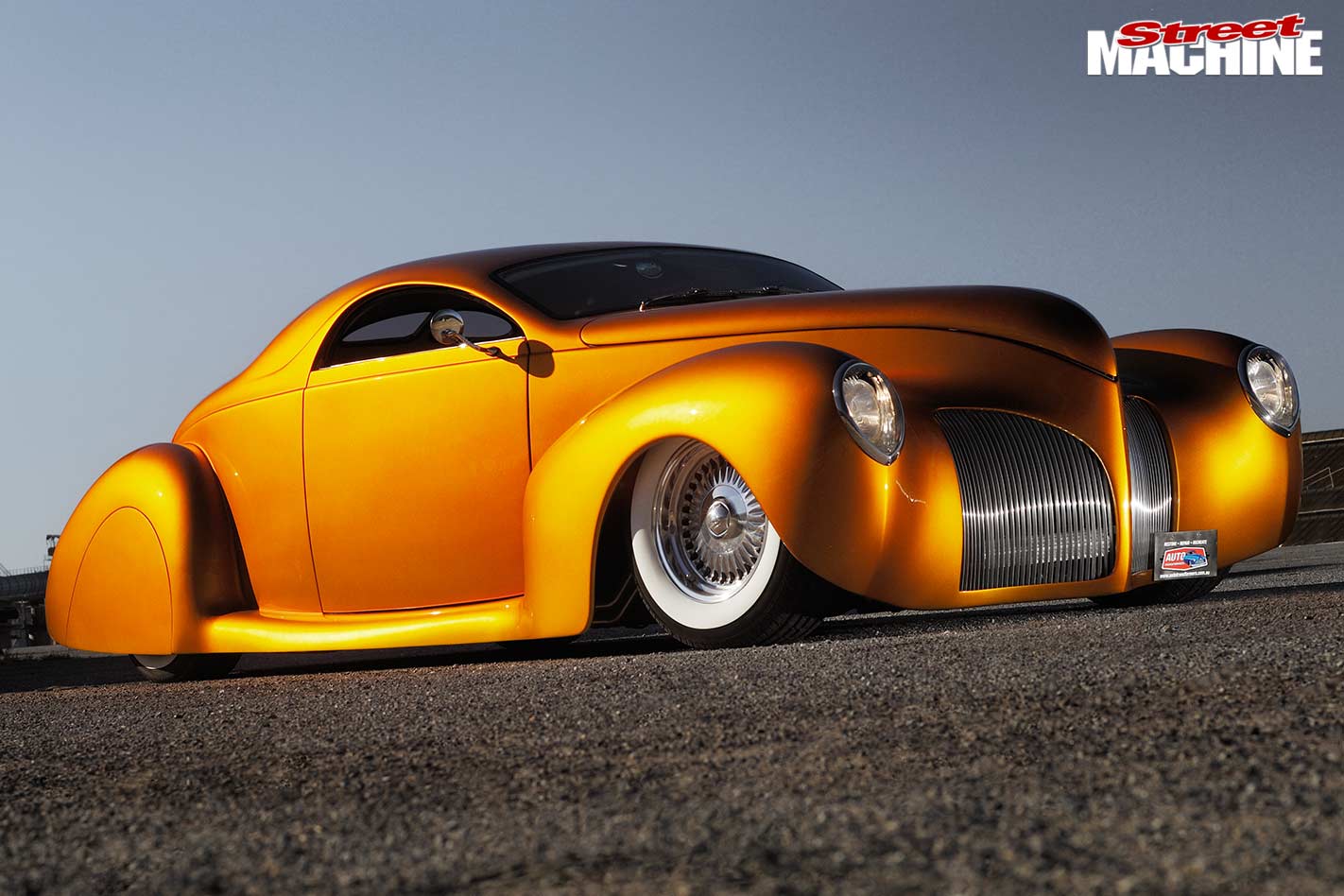 Compact dimensions and oodles of power make LS mills the perfect candidate for many vehicles, including Andrew Mitchell’s ’39 Lincoln Zephyr

All Generation IV engines use fly-by-wire throttles, which need to be changed back to cable operation in older vehicles. Off-the-shelf parts are available through many suppliers.

There is a mind-boggling array of GM factory accessory drives for LS engines, let alone what is available in the aftermarket. For the purposes of keeping this story to a few pages, do your own research before you buy. 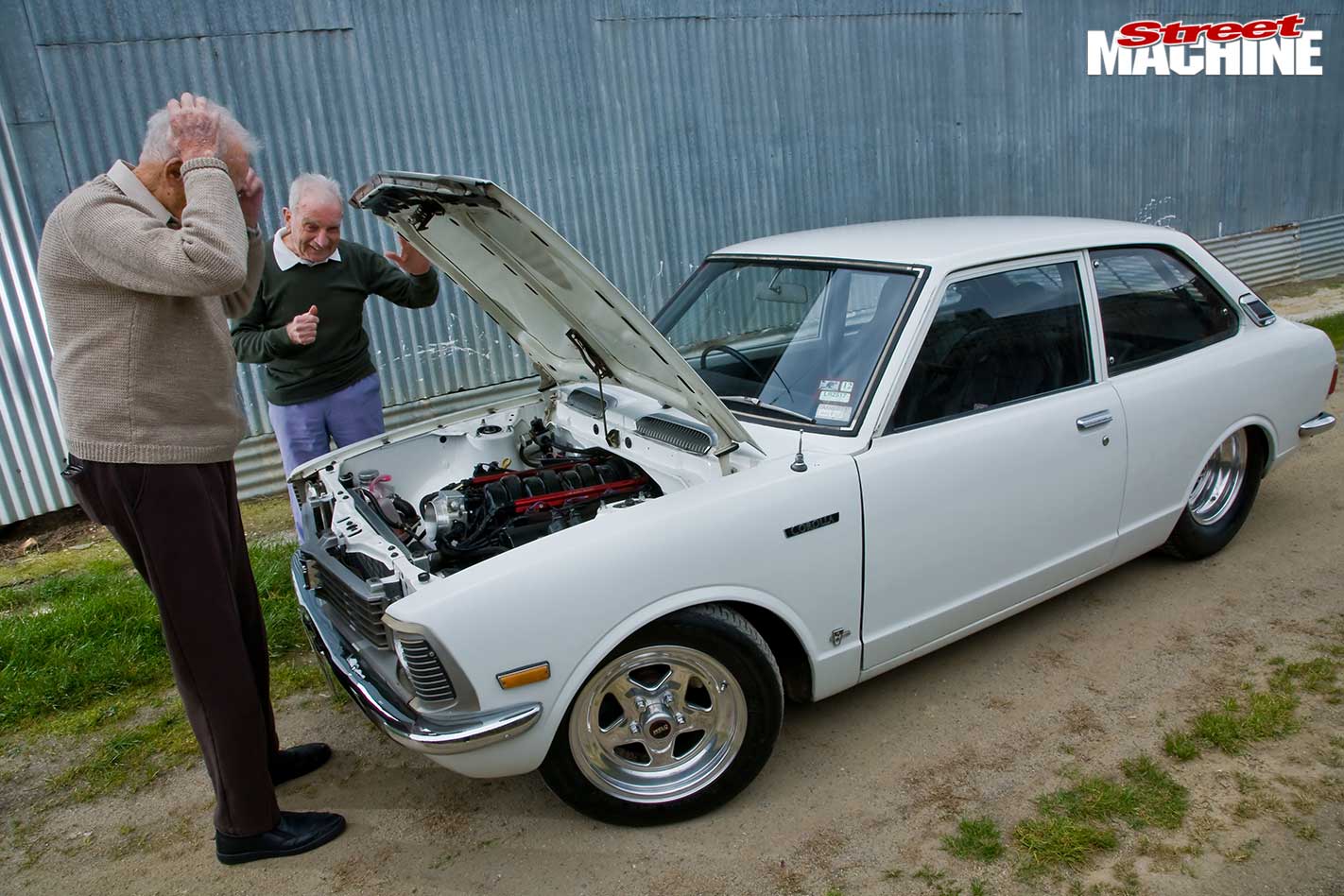 If you don’t like the look of the LS’s EFI system or want to simplify your swap, there are a couple of solutions. Holley makes a throttle-body style EFI that looks just like a traditional four-barrel carburettor but retains the driveability of modern electronic injection. Along with Holley, Edelbrock also sells full carburettor conversion manifolds (Victor Jr and Performer) for LS motors, along with a new valley pan. With an MSD 6LS Ignition Controller, the LS is just a set of finned rocker covers and a carby or two away from appearing vintage-cool.

Conversion wiring harnesses are available off the shelf for popular US models. Aussie street machines don’t have quite the same support just yet, but conversion kits are available for the more popular models from businesses like Castlemaine Rod Shop. However, as yet there is no all-encompassing kit. 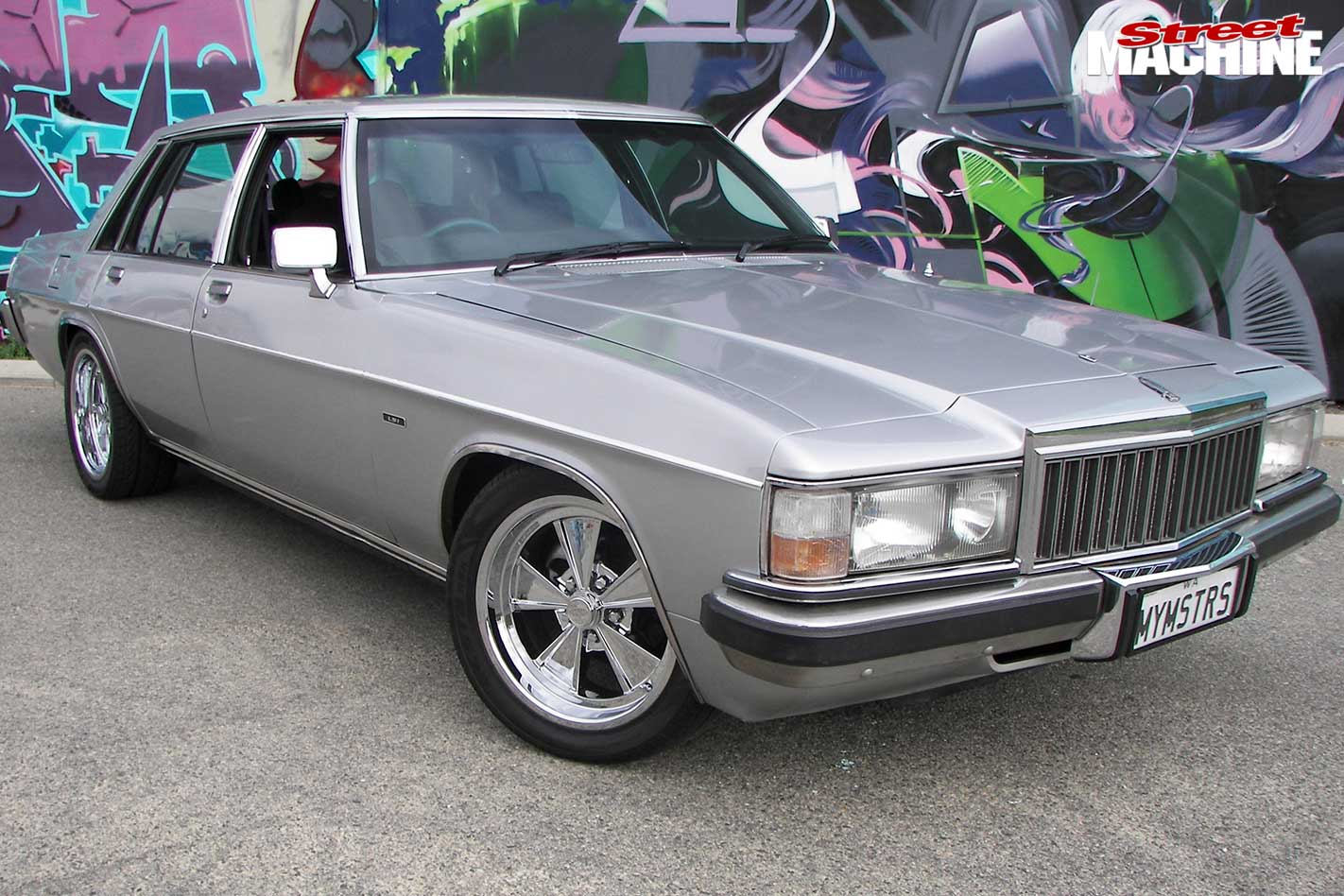 When changing to EFI from carby induction, remember you need several emissions controls from the donor car, including an Unleaded Fuel Only sticker and filler neck for your tank; a charcoal canister in the engine bay; cats and oxygen sensors positioned accurately in the exhaust system, and an air filter shrouded on three sides

Some vehicles, like first-generation Commodores, require the starter motor mount to be changed from the driver’s side to the passenger side of the block. Kits are widely available, including from Castlemaine Rod Shop, Mal Wood Automotive, Mark’s 4WD and CAE. 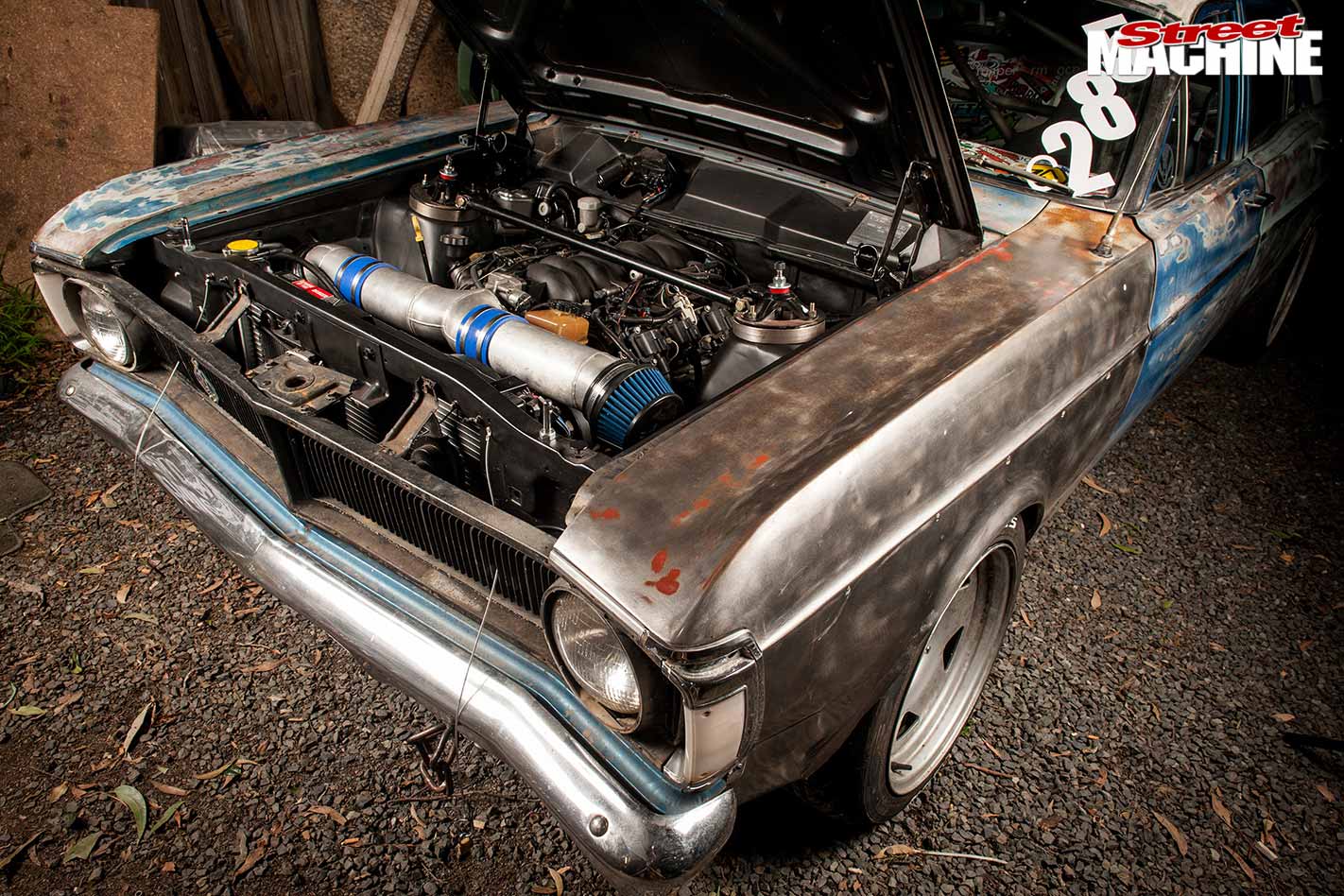 Even classic Falcons have been known to cop an LS heart transplant! James Mackie’s XY upsets both the purists and his competition on the drift circuit

When buying a kit from the US for a right-hand-drive car, you should remember that headers, engine mounts and starter motor locations may be different. There are many tales of woe from people finding their imported headers don’t fit around their steering linkages.

While it may be physically possible to cram an LS engine into just about any car, there are rules and regulations to adhere to, particularly regarding meeting the emissions standards and ensuring your LS doesn’t have too many cubes for the car you’re putting it in. That said, there is another point of view that says that pretty much anything is legal if you’re engineer deems it safe. The best way to avoid wasting epic amounts of time and money is to consult an engineering signatory before you start, as they can advise whether the project is able to be registered and legally driven on public roads. Check with your state’s road body for a list of engineering signatories.

GET THE TAPE OUT 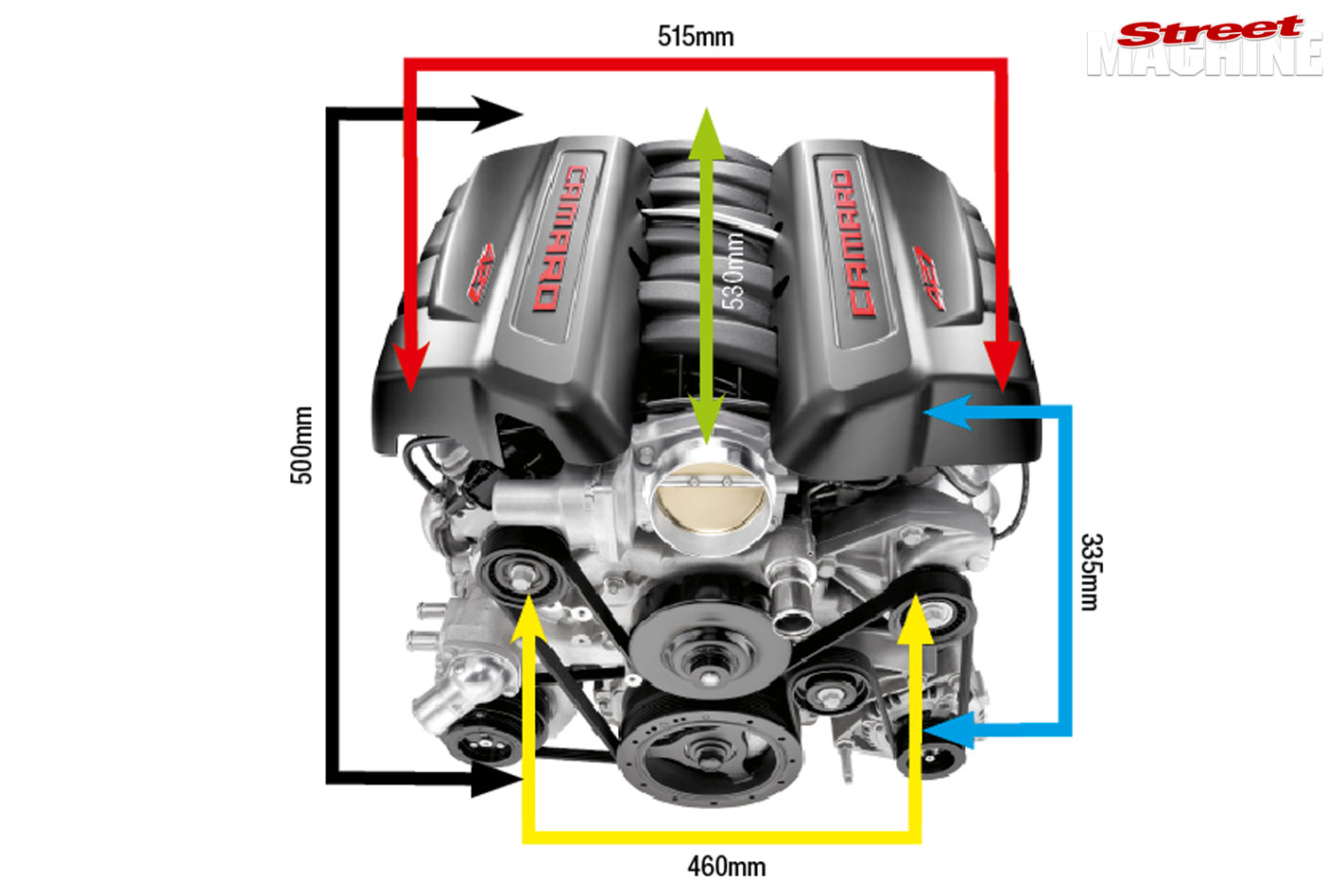 All fired up to stick an LS engine into a project car? Us too, so we ran a tape measure across a VX 5.7-litre LS1. These measurements do not include the sump as there are so many different ones out there. Similarly, we haven’t included ancillaries like water pumps and serpentine belts, nor torque convertors and clutches.

From the bottom of the block to the top of a factory intake manifold is 500mm, while the distance between the outermost points of the cylinder heads is 515mm. The block is 460mm across the widest points, and measures 530mm front-to-rear, not including accessories. Finally, from the bottom of the block casting to the top of the lifter valley is 335mm.

With the rapidly rising cost of classic 60s and 70s tin, there is increasing interest in swapping LS V8s into late-model Japanese and European cars. 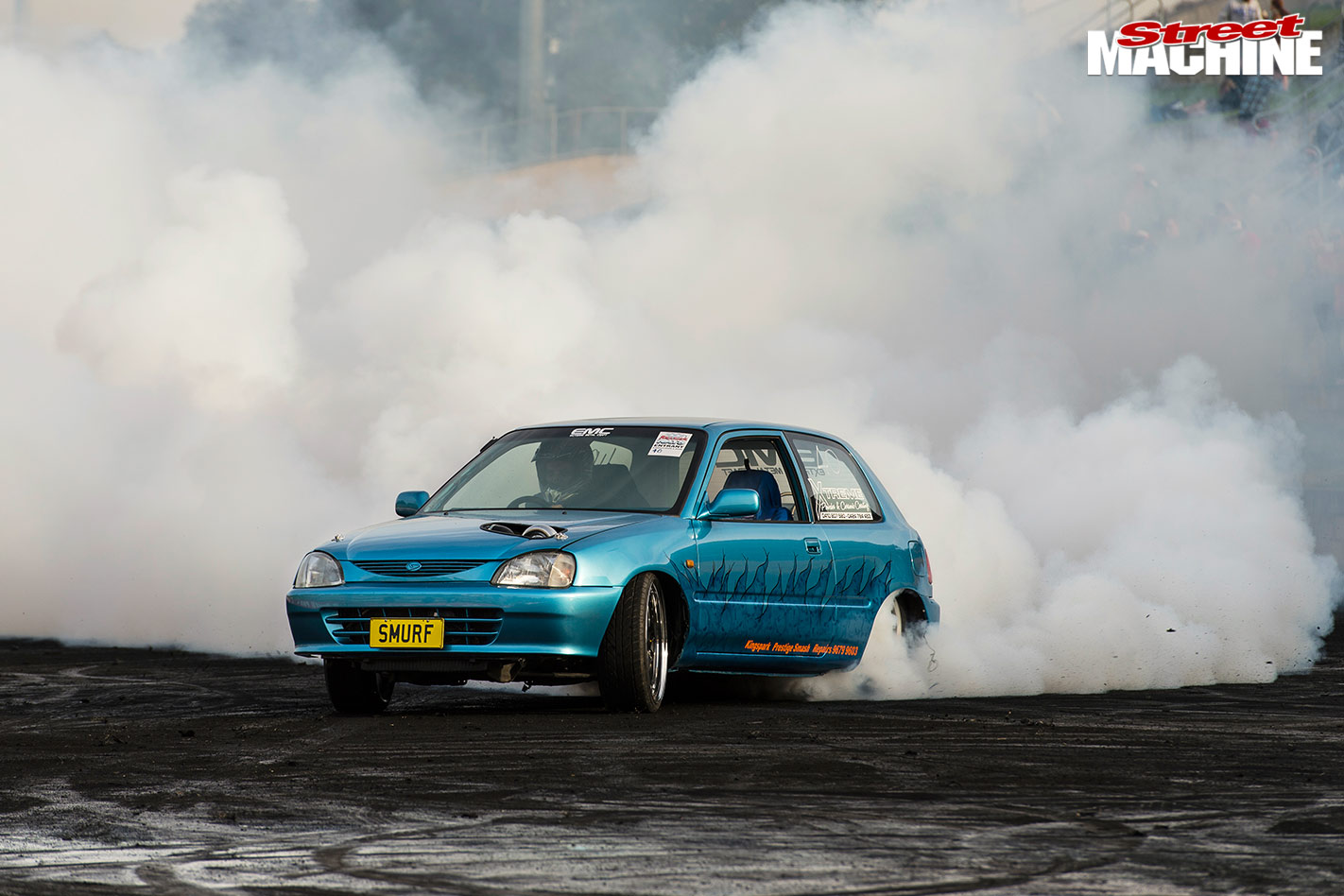 S13-S15 Nissan Silvias/200SXs and FC-FD Mazda RX-7s are among the most popular non-GM platforms. Conversion kits are available from Granny’s Speed Shop, Fueled Racing, DAFT Innovations and Hinson Supercars, some of whom also offer kits to suit RHD. They aren’t fully plug-and-play however, as steering rack modifications are commonly required. 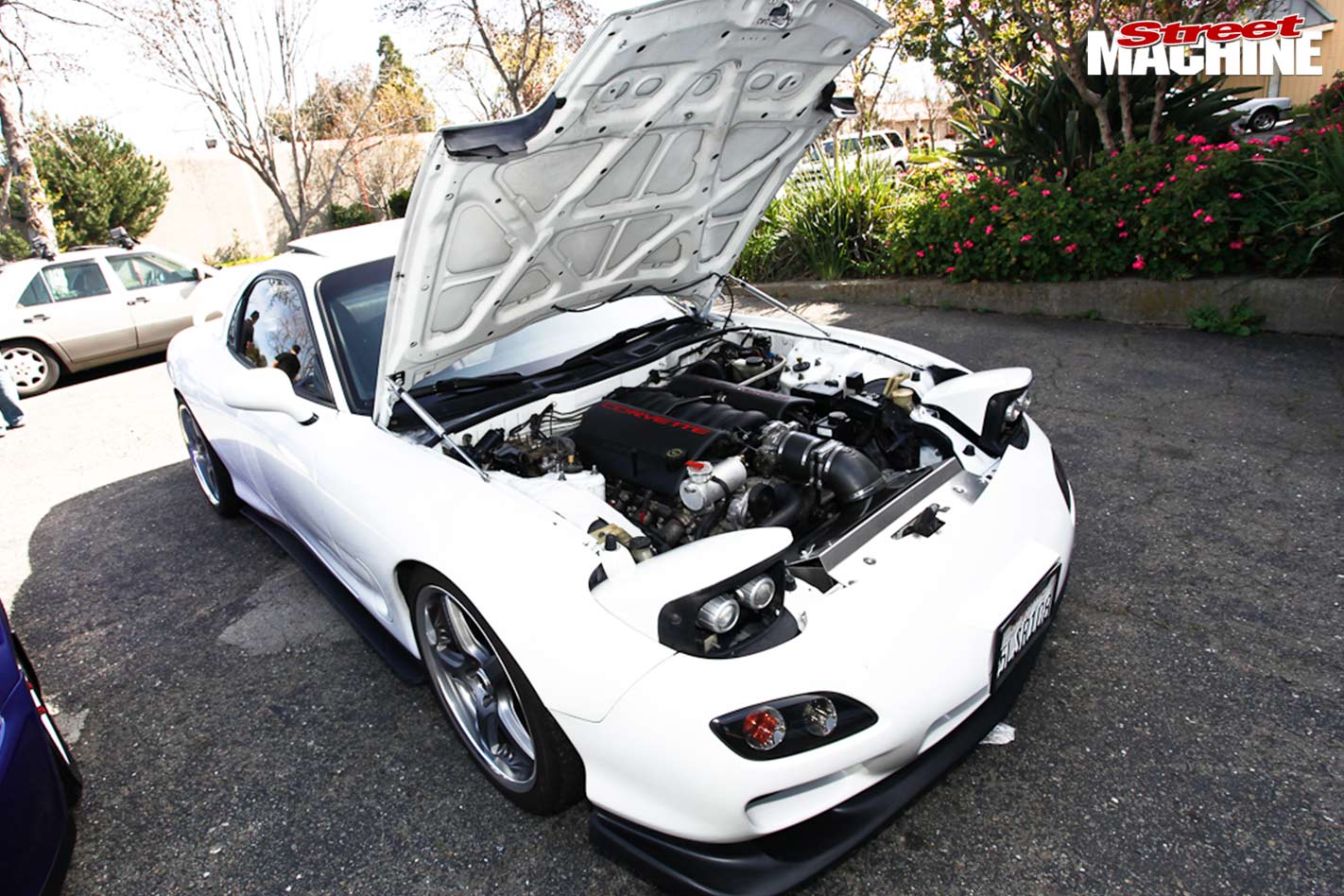 BMWs have become a top choice for LS engine swaps around the world, especially the E30 3 Series (1983-1990) and E36 3 Series (1991-1998). Extensive custom fabrication is required, including engine and transmission mounts, tailshaft, sump and exhaust, along with a customised wiring loom. Other issues include the lack of space for the exhaust around the steering knuckle and relocating the E30 brake booster.

A handful of LS-converted BMWs have been built in Australia and plenty of information is available online for those interested in treading this path.

We run through popular LS conversions, from the easiest to the hardest: 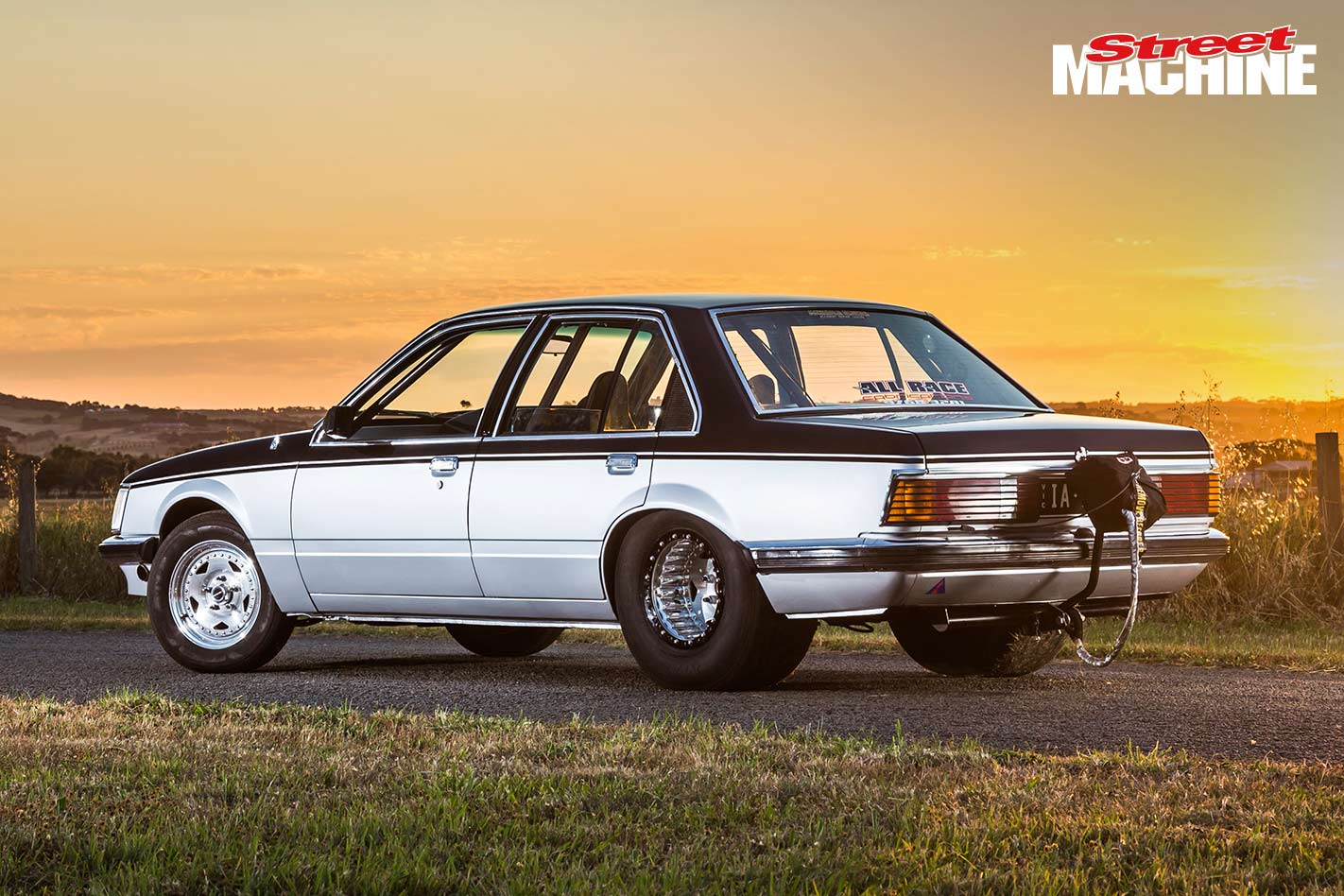 VC-VL Commodore: Tighter in the engine bay and transmission tunnel, but good aftermarket support means it isn’t out of reach of a handy home enthusiast. This swap is popular in circuit racing classes like Improved Production (IPRA).

FC-FD Mazda RX-7: One of the favourite LS swaps worldwide, there are multiple kits making the drivetrain a bolt-in option, with wiring and final fit-out more involved. Registration and engineering is possible if attention is paid to engine capacity. Also popular with circuit racers.

S13-S15 Nissan Silvia/200SX: Along with the RX-7, there are several bolt-in LS conversion kits available for the popular Nissan S-chassis platform. The Nissan’s excellent driving dynamics make this swap a popular option for drifters and circuit sprinters.

VN-VS Commodore: As LS swaps into second-gen Commodores gain popularity, the aftermarket support is improving, making the job easier for amateur home enthusiasts. Clearance for extractors around the steering is an issue. 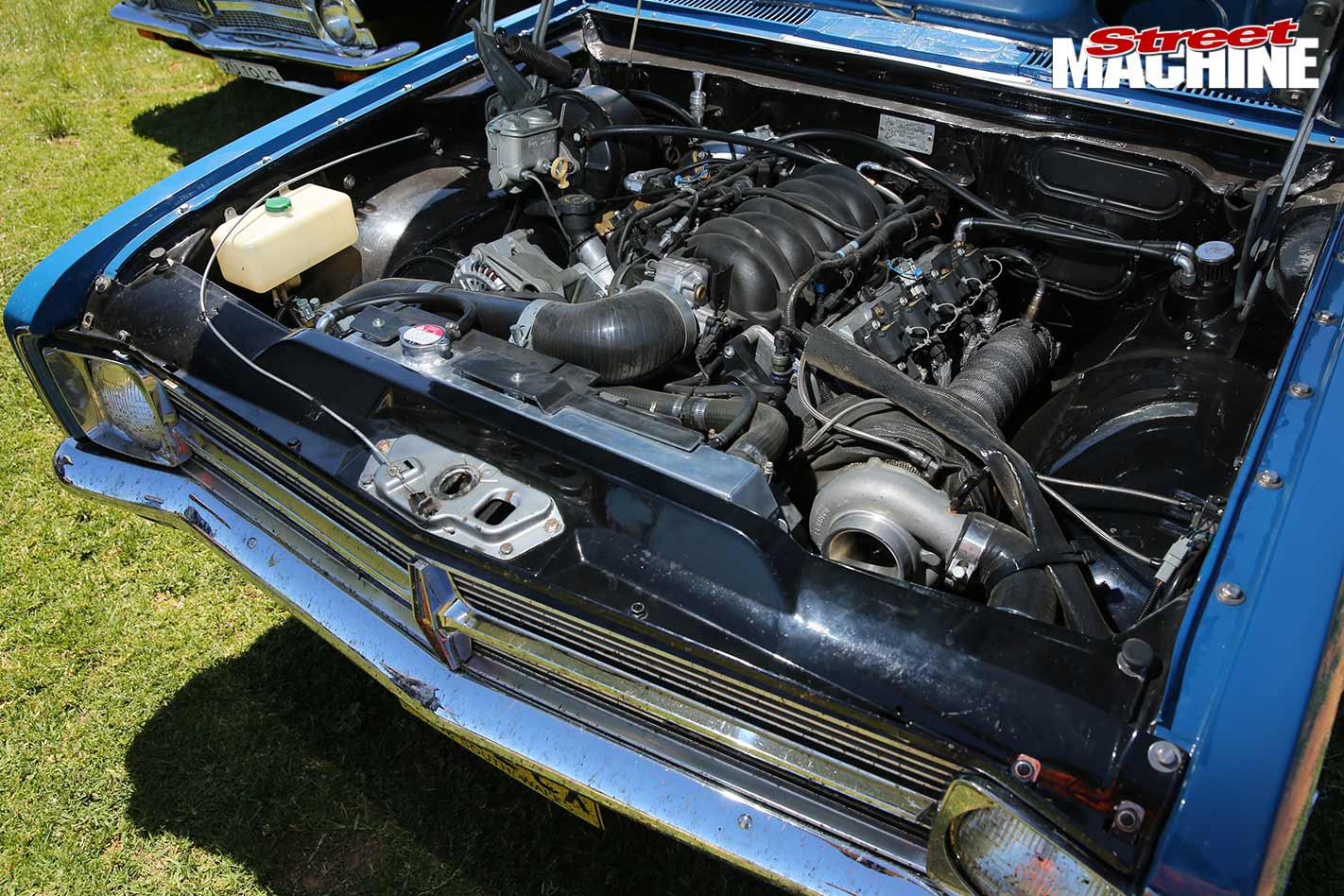 HK-HG Holden: Not as easy as HQ-WB, due to the sump modifications required and the need to convert the steering box to rack-and-pinion. The standard trans tunnel won’t fit a gearbox larger than a Turbo 350.

BMW 5 Series: While there are no off-the-shelf kits for BMW’s E28 and E34 5 Series sedans, they ran V8s new and have large engine bays. Engine mounts and exhaust must be custom-made. 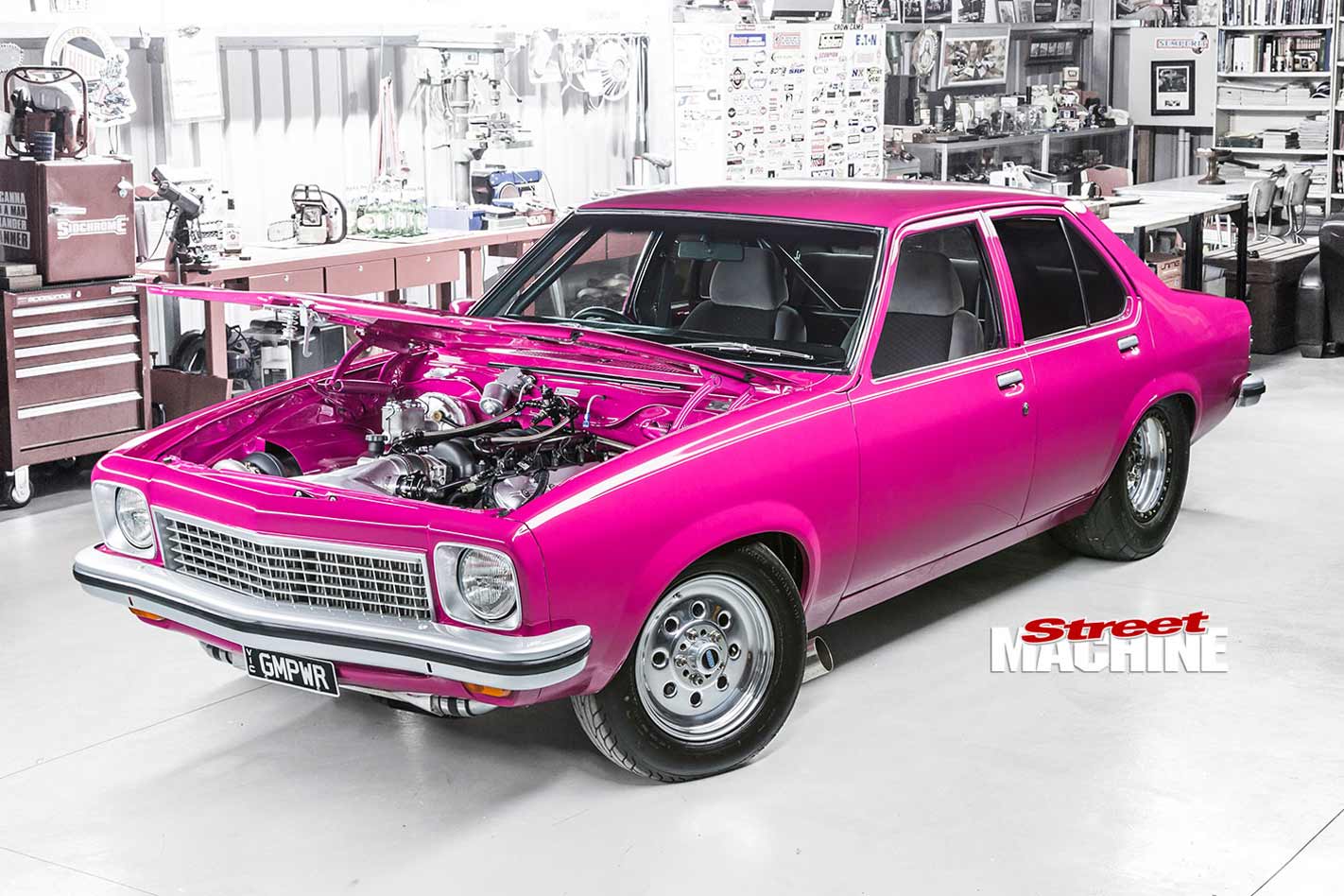 LH-UC Torana: Tare weight and capacity restrictions for registration mean careful engine selection is mandatory. Not all LS engines are legal in light Toranas, especially UCs, which only came with six-cylinder engines. There is good support for conversion parts, though.

LC-LJ Torana: An LS LC-LJ is only road-legal in Australia with a 4.8-litre variant and this swap requires extensive fabrication, including the sump, engine mounts and headers. Rocker-cover clearance to the firewall could be tight.

BMW 3 Series: The E36 LS swap has good support in the US though their left-hook steering complicates things in RHD markets. The E36 is a much easier swap than the smaller, lighter E30, which also runs into problems with maximum engine size. 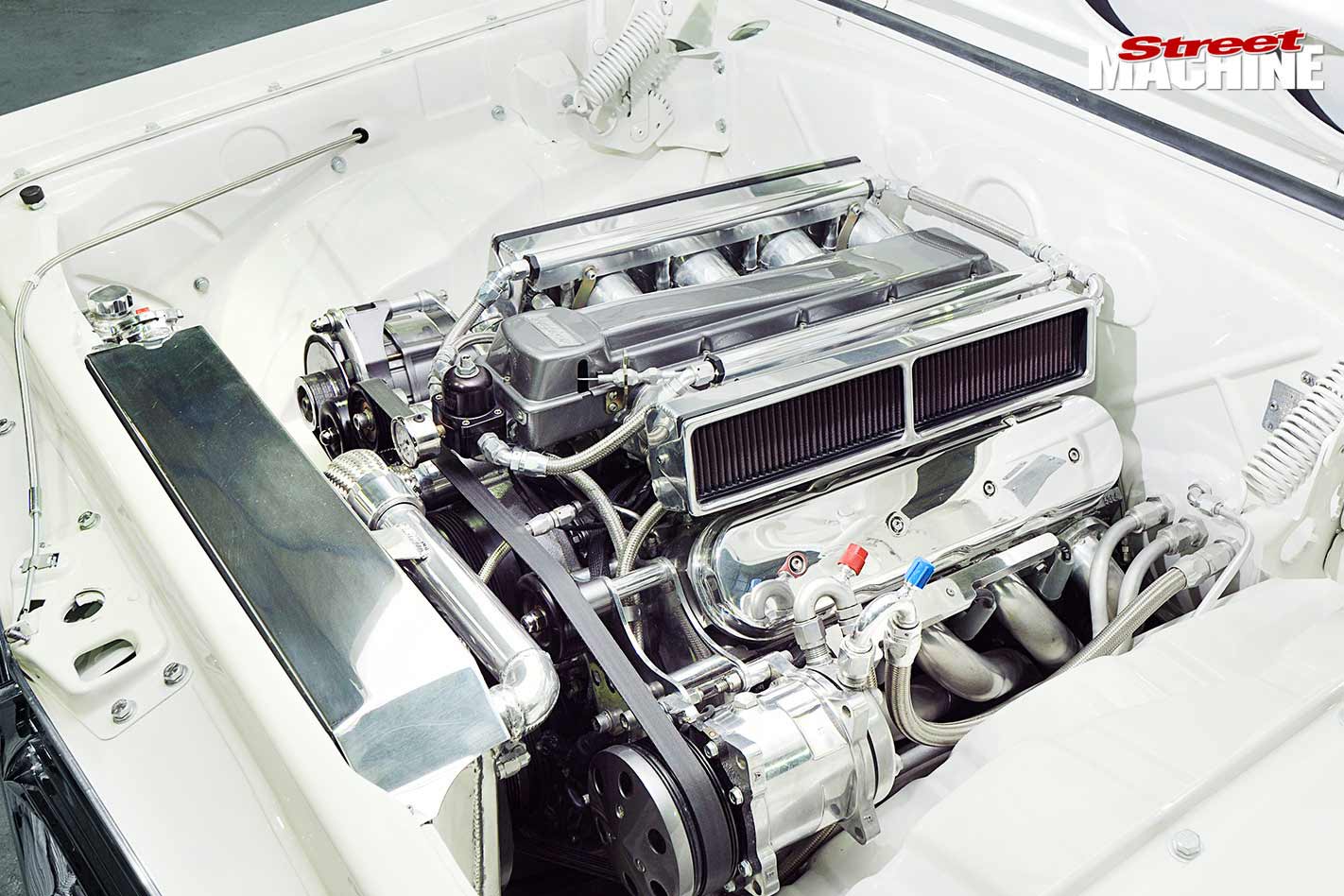 FX-HR Holden: Extensive fabrication and re-engineering of the front-end is required, as well as a bigger transmission tunnel and chassis strengthening. Engineering can be a challenge due to the range of modifications required and the chassis’ tare weight. 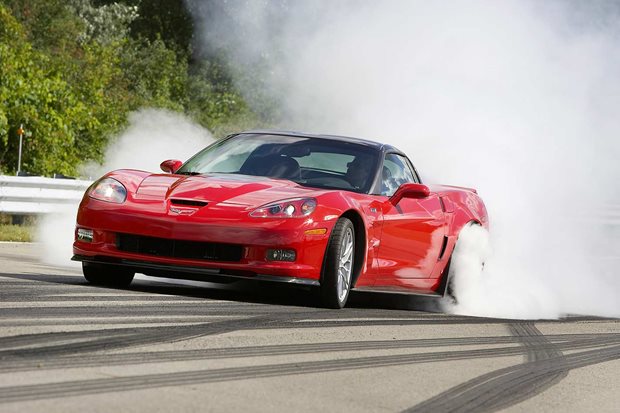 In part two of our LS family tree, we look at the Gen IV-series starting with the LS2 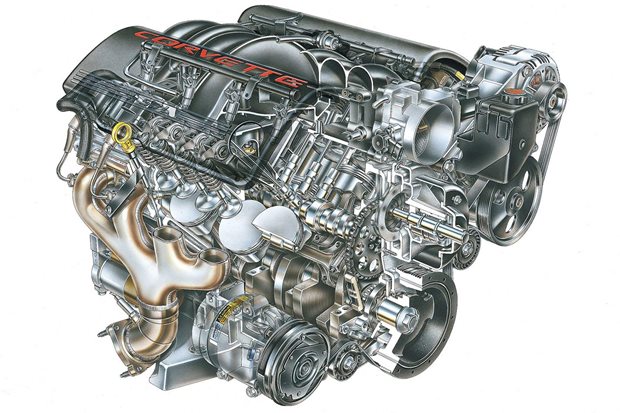 After almost 20 years in production, there are dozens of LS engine variants, so here is he skinny on the LS family tree 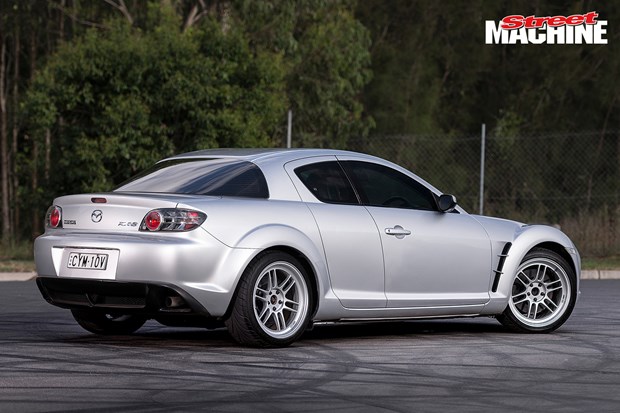 LS-swapped Mazda RX-8s are a hot new trend thanks to four-door practicality, a well-sorted chassis and an engine bay that can swallow six litres of GM’s finest 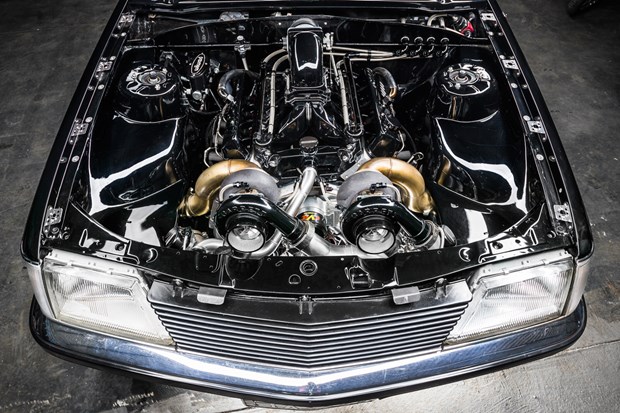