Looking back on a Scott Miller's knockout knocked-down '66 Mustang

Looking back on a Scott Miller's knockout knocked-down '66 Mustang

MUSTANGS – especially ’66s – generally don’t get axed. Mostly they’re restored to the same pristine condition they left the factory in. Yeah, there are some wild ’Stangs about, some set up with full Pro-Street gadgetry. Fine. But we’ll bet you’ve never seen one like Scott Miller’s ‘hammered’ ’66.

This crew-cut caper began five years earlier when Scott found a ’66 laying on its belly behind a garage. The wheels were gone and the interior had long departed. Can you believe it? At first, the battered cruiser was lining up as a parts bin for Scotty’s future project. But once work started on the body, Scotty-boy changed his mind. The parts car soon became a project car… 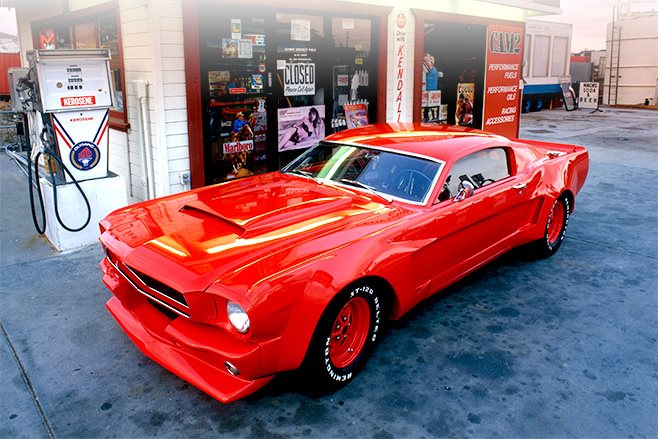 Scott’s find-it-and-fix-it foray quickly became a family affair, with his dad helping on the sheetmetal work. The only panels cut, chopped or bent were the door skins – everything else was modified. Extensively. But the doors didn’t escape unscathed. Scott removed the windows and frames, replacing them with slide-in tinted plexiglass panels. Father and son lopped off the ’Stang’s head and dropped the roofline 3½ inches. To do this, the windscreen was raked backwards and the rear fastback panels thoroughly reworked. 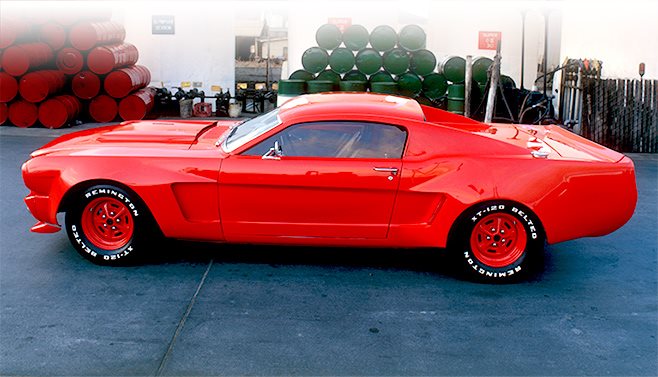 Scott gave the sloping rear window the flick and filled in the rear seat with a new deck lid. He then installed a vertical rear bulkhead and fitted a custom-made rear window just behind the passenger area. The guards were pumped out in metal to form huge flares. The reformed front guard crests the top lip and descends to form a rear air duct. This leads into the stock panel work on the door and, further on, to a moulded-in sill extension. The rear guards he pumped to match the fronts. The original bootlid remains, but in an extensively reworked form to suit its new surroundings. The rear panel was resculpted with custom sheetmetalwork. The factory bumper, lights and trim have gone. In their place is a smooth, clean panel tipped with a GT350 rear deck spoiler and end caps. Four truck tail-lights, a pair of Mustang over-riders and an offset number plate recess complete an impressive and different rear end. 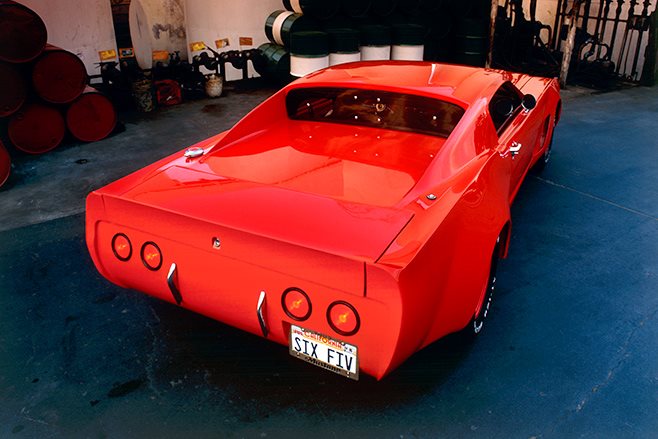 The nose uses a ’66 Shelby GT350 racing apron with a moulded spoiler. The bonnet has a huge Shelby scoop perched out front to ram cold air into the 289 percolating below. Covering that reshaped sheetmetal are 10 coats of Centari Guards Red acrylic enamel. And, yes, it’s as deep and drinkable in the flesh as it is in our fab photos. If you said the car was nicely finished, you’d be dead right. Explains why Scott didn’t just attack the looks department like an axe murderer. He also tackled the chassis with new framework, connecting front to rear with a seamless rectangular tube. Inside, he built up a six-point 2x3-inch tube roll cage. The rear end has been dropped using home-built two-inch lowering blocks on a ’73 Ford nine-inch. That piece of Henry hardware runs 2.75 gears. To make sure power moves cleanly through the back wheels and onto the bitumen, Scott built and installed a set of traction bars. And a tailshaft loop for protection… 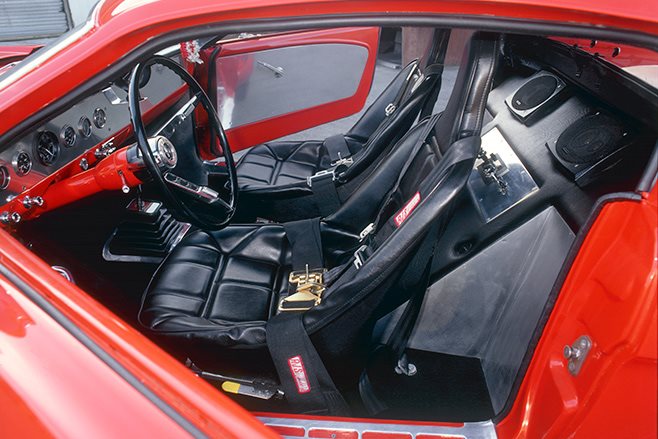 The front end has also been dropped a couple of inches and uses Monroe heavy-duty springs with a Shelby-rated swaybar. Brakes are drums on the rear and Kelsey Hayes discs with four-spot calipers at the front. Keeping his hammered Mustang rolling is a set of 14x8 Ford steel rally wheels with Remington XT 120/G60 x 14 tyres. These are colour matched and are neatly offset by the white-lettered tyres.

The workmanship and ideas inside the comfort zone just keep you fascinated. The rear seat’s been replaced with a bulkhead that now carries the stereo unit and some of the speakers. The dash has been replaced with a racer-like polished aluminium panel and filled with a full suite of Stewart Warner instruments. The door panels and the headlining are made from 10mm aluminium sheet, giving greater rigidity and less sound penetration than the thinner sheetwork found in Pro-Streeters. Seats are a pair of fibreglass racecar buckets covered in black naugahyde – vinyl to you and me – and fitted with full-harness RJS belts. Looks good, works fine! 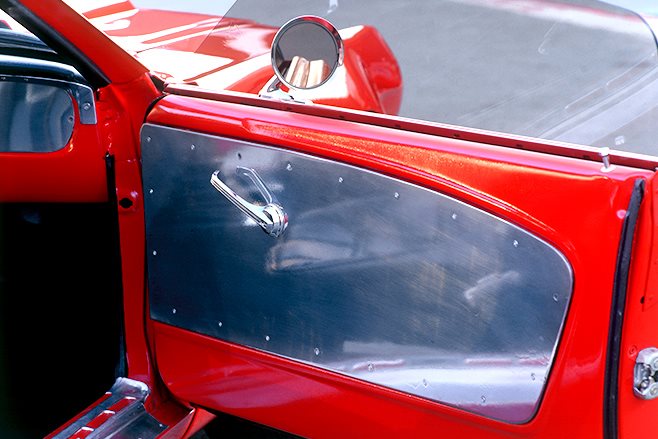 Under this startling beast’s scooped bonnet is a Ford small-block hi-po 289. Overbored 30 thou and boosted to 10:1 compression, the engine boasts an oiling system that’s been upgraded using a high-volume pump. The heads have been ported and polished, the intake uprated with an Edelbrock Torker manifold and incoming charge is delivered in larger doses thanks to a 650cfm Holley four-barrel. The Holley’s topped with a Weiand air cleaner, while the engine gets some smart highlights with chromed valve covers and breather caps. Ignition sparks zap out of a modified Ford distributor. The exhaust system uses factory cast-iron headers backed up to dual pipes with Glasspak mufflers. 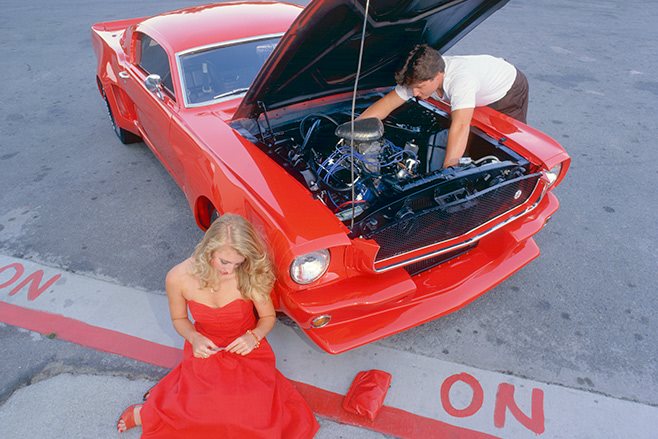 Power is transferred to the rear wheels via a ’67 Ford TopLoader four-speed, Borg & Beck three-finger 10½-inch clutch and Hurst Indy shifter. Making sure Scott doesn’t suffer physical damage if the clutch lets go is a Lakewood Blow-Proof scattershield. If you were a cool dude into the current street-machine jive, you’d call what Scott Miller and his dad have built a “very bad-looking automobile”. We’d say it’s very bad indeed…

Cool info: Mustang Project Design Chief Joe Oros: “I wanted the car to appeal to women, but I wanted men to desire it, too. I wanted a Ferrari-like front end, the motif centred on the front – something heavy-looking like a Maserati, but, please, not a trident – and I wanted air intakes on the side to cool the rear brakes. I said it should be as sporty as possible and look like it was related to European design.”
Paint: Centari Guards Red
Engine: 289 + 30 thou
Gearbox: TopLoader
Diff: Nine-inch
Wheels: Ford rally
Interior: Aluminium dash, Stewart Warner instruments, fibreglass race bucket seats in black vinyl, full-harness RJS belts