IT’S A jungle out there, man – an information jungle. Internerd forums tell you one thing; the bloke at the speed shop tells you another. Your ‘expert’ mates all have their opinion and the stuff you read in the brochures is just one more take on what will happen if you push Existing Tab A into Aftermarket Slot B under the bonnet of your streeter. 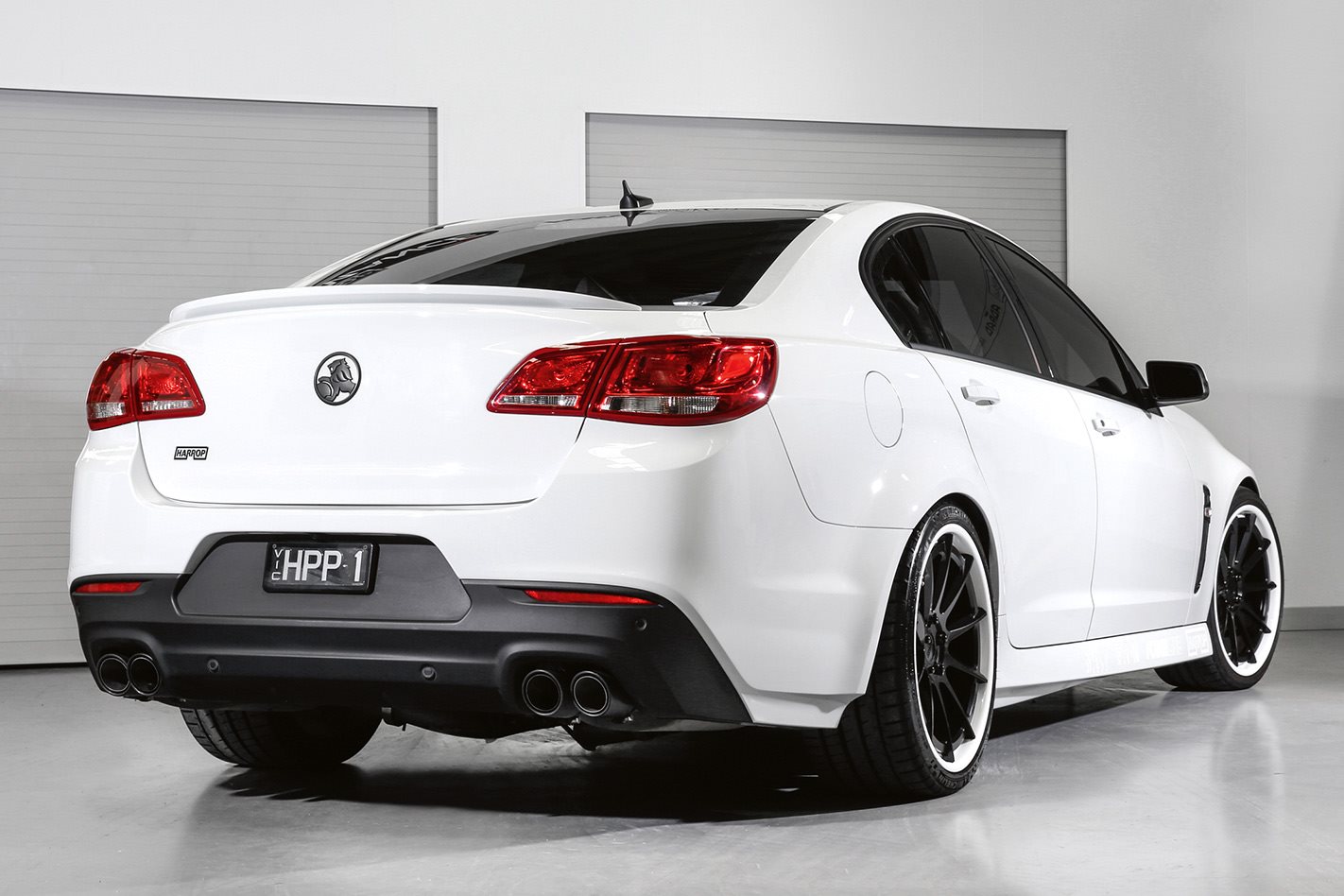 Who do you believe? Beats us, but Harrop Engineering feels your pain. So the boys and girls over at Harrop’s head office in sunny Melbourne have come up with a plan. It’s a simple plan, but it’ll possibly be a defining moment for owners of late-model Commodores. The broad idea is to take a stock VF SS auto and, working in stages, upgrade the thing until it pulls big smokies, twists the dyno out of the floor and gets across 400m of hotmix faster than a cop in a doughnut shop. This will be done in a series of steps, and SM followed the white VF’s progress as it goes from stocker to head-kicker.

So let’s start with the basics. What we have here is a current-model VF Commodore SS auto. It’s fitted with Harrop’s big brake kit and 20-inch Forgeline wheels, while Mickey Thompson ET2s are the hoops chosen to act as the control tyre for this episode of mad science. Beyond that, Ol’ Whitey could have come straight off a Holden dealer’s showroom floor. 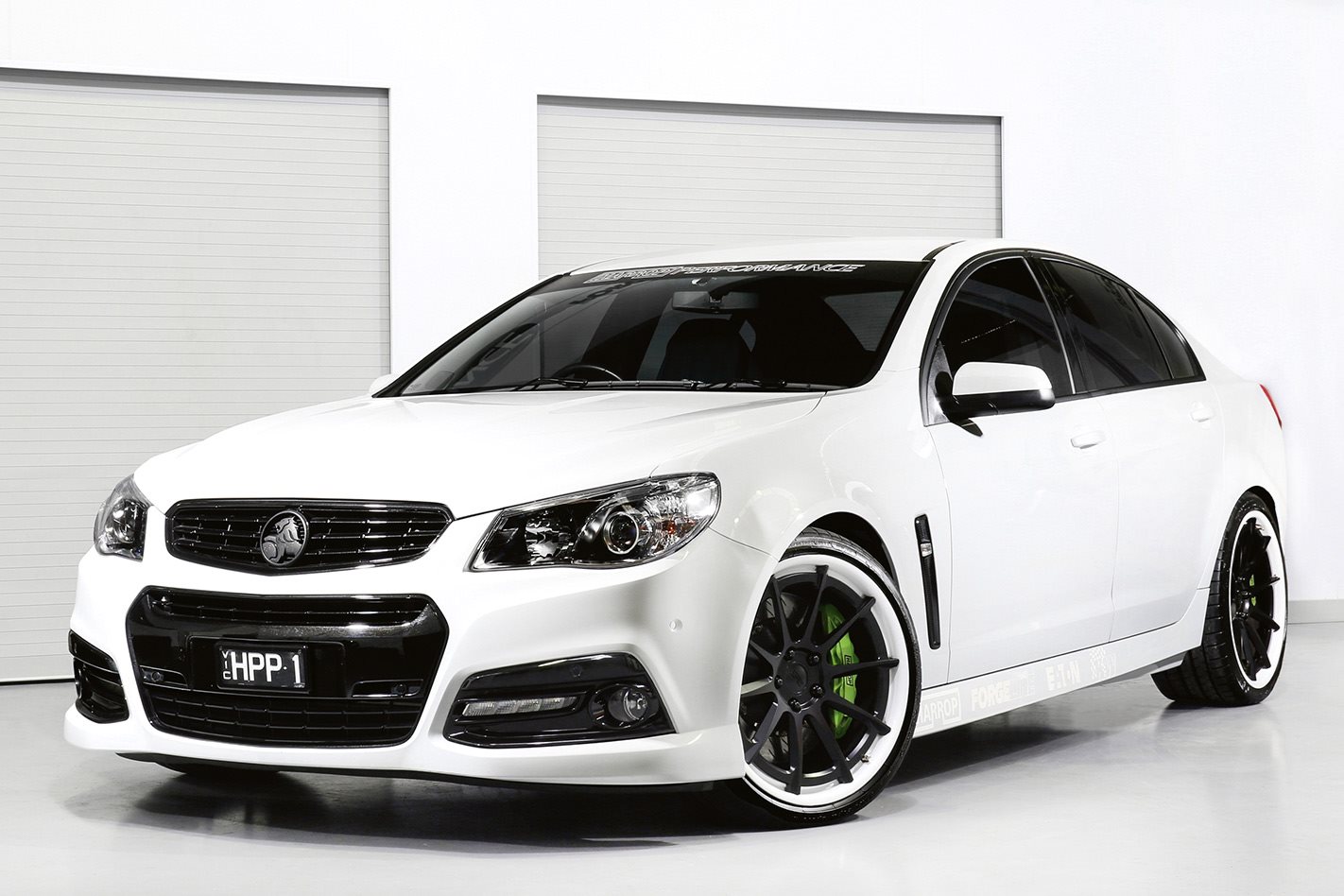 Usually, the first step up the Harrop modification ladder for the Chevy six-litre is to fit what the company calls its 315 Pack. As in 315kW. That’s achieved by fitting a cat-back two-and-a-half-inch system and an over-the-radiator cold-air intake, but retaining the stock exhaust manifolds. All yours from about $4500, depending on how you want to set things up.

Fair enough, but in the interests of cutting to the chase, Harrop has skipped that step, instead throwing Stage Two at the car first up. That’s called the 325 Pack (can you guess the output?). That gets you the Stage One stuff as well as headers, high-flow cats and a tune for the Holden ECU.

Leigh Conlan is one of the Harrop guys directly involved in this project, and he reckons the Stage Two is a great way to kick off modifying any six-litre Commodore. “With the 325kW Pack, the car ran 13.06 and made 285.3kW at the wheels on our dyno. Stock, these things make about 220 at the wheels, so it’s a good boost for the money,” he says. 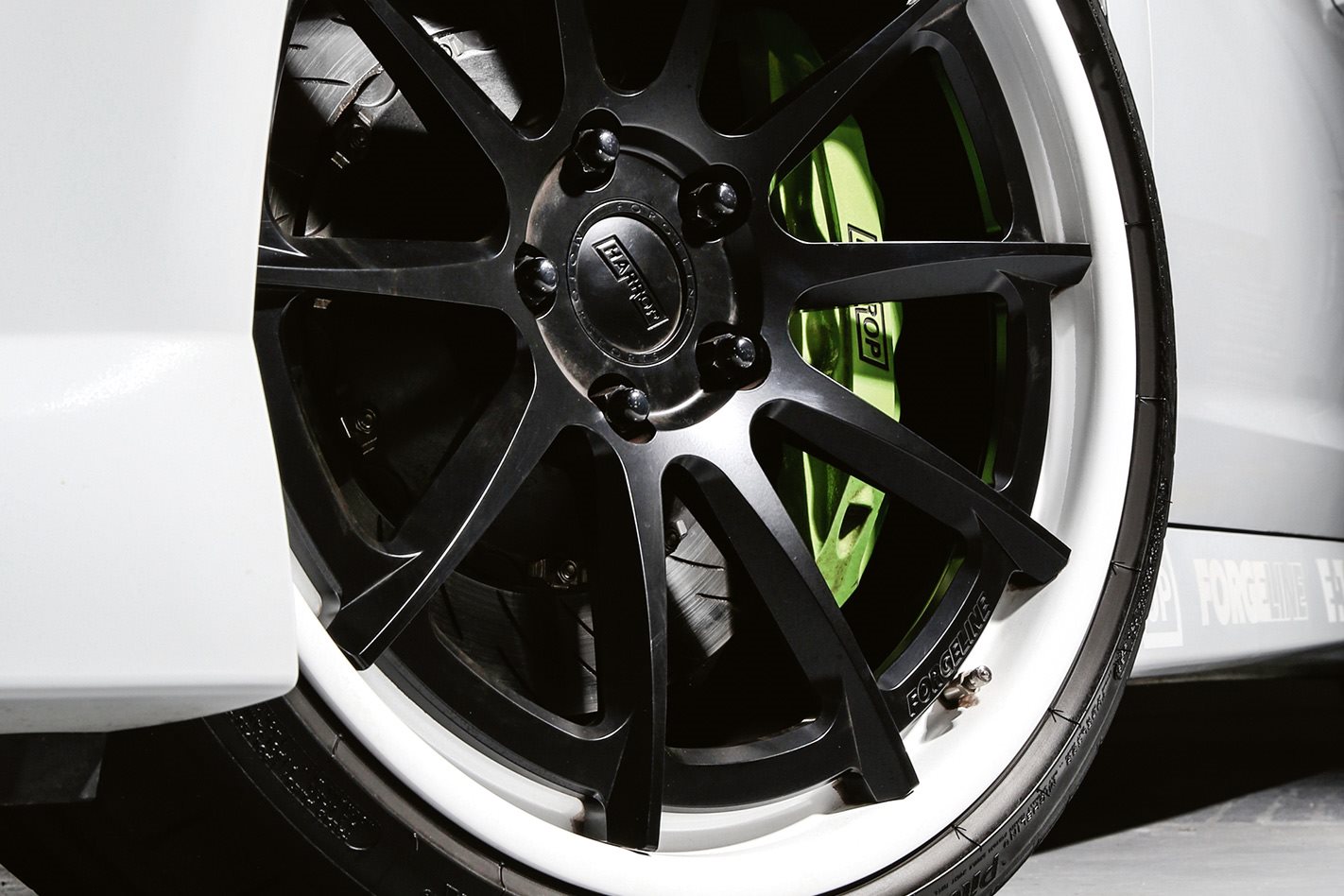 The Heron White VF SS sports a set of 20in Forgeline wheels for the street, but the guys bolt a pair of 18s with sticky Mickey Thompson ET2 tyres for drag-strip duties

Ah yes, money. Well, those figures were achieved with a bi-modal exhaust (just like a HSV) which is optional and takes the 325 Pack price to $7600. On a horsepower-per-dollar basis that’s pretty good and underlines just how tuneable these L77s really are. And, possibly, just how soft the factory tune is.

But, as the bloke with the steak knives once said: “Wait, there’s more.” 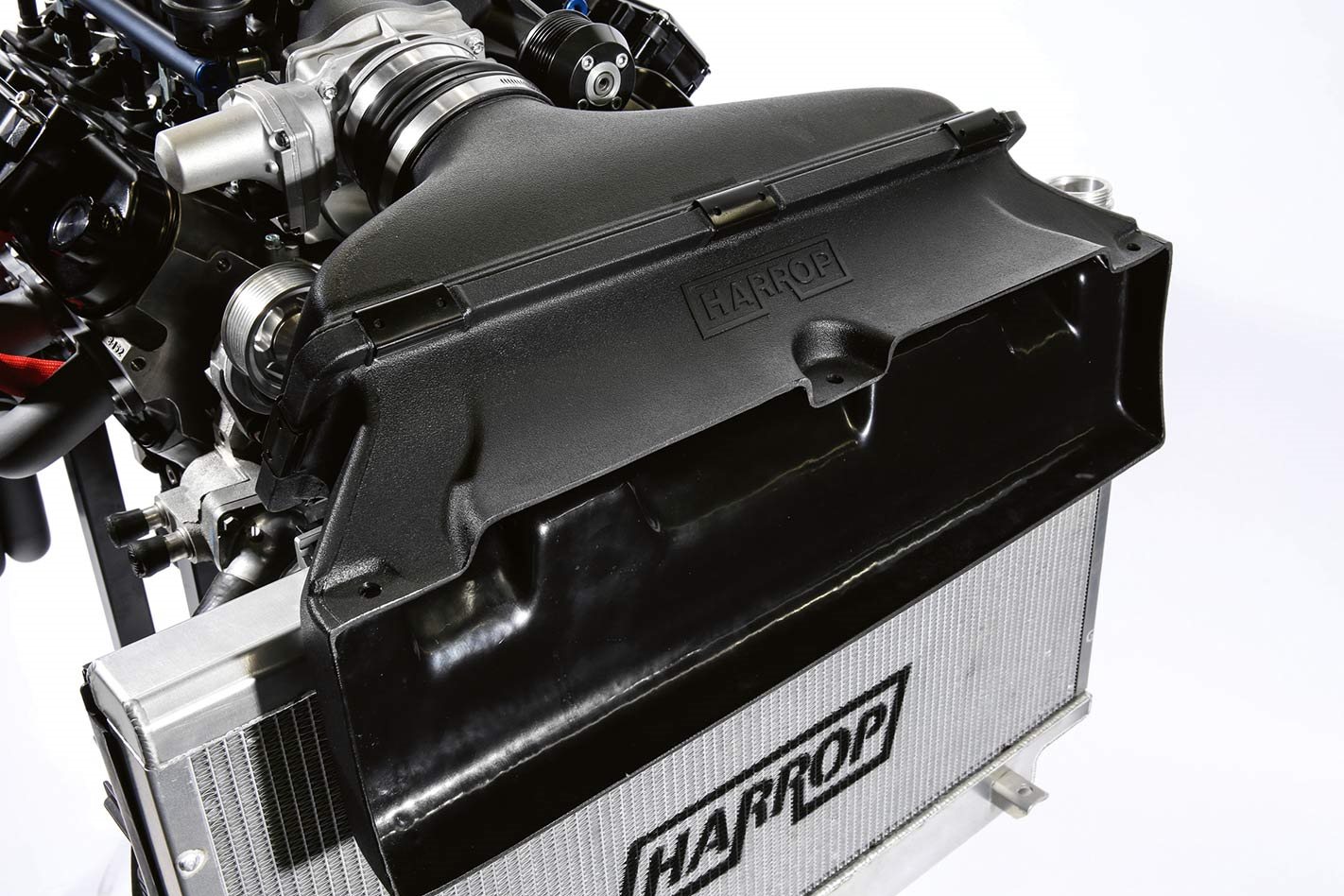 Stage Three consists of what Harrop calls its Camshaft Kit. It kind of does what it says on the box, too, because the stock stick is ditched for a new cam, valve springs, lifters and assorted ARP fasteners. Why swap out the lifters? It’s all to do with Holden’s smarty-pants AFM system, which allows the big eight to drop four cylinders on a cruise to improve fuel economy.

“That requires special lifters that can be deactivated by the ECU, but that won’t work with this camshaft, so we have to change a few bits of hardware to essentially delete the AFM,” Leigh explains. 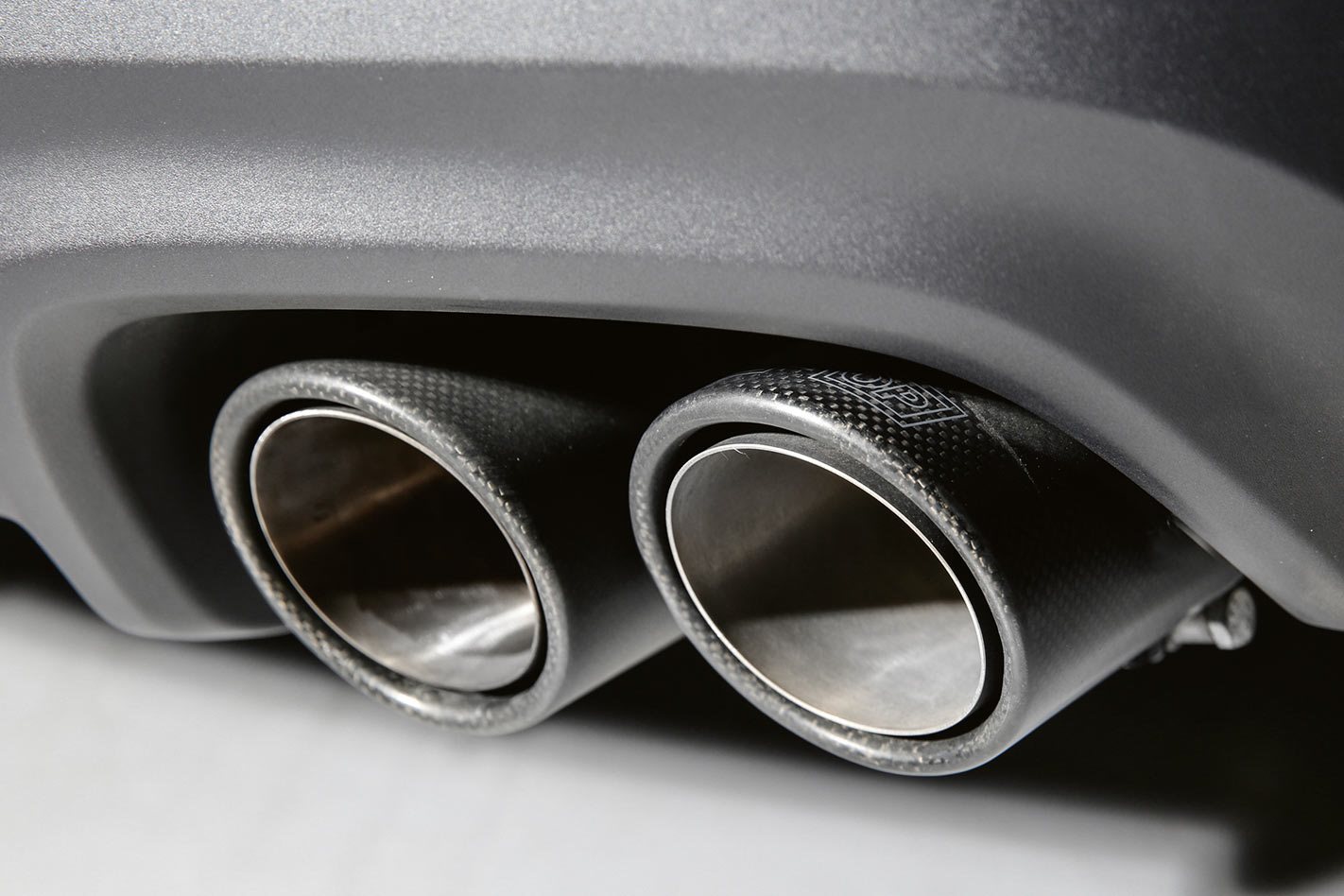 They also added the optional bi-modal exhaust; that was good enough to run 13.06 at Heathcote Park Raceway

Of course, Holden only fits AFM to automatic Commodores, so a manual shouldn’t need these changes, right? Wrong.

“The manual SS doesn’t have the AFM software, but it does have the same hardware, so you still need what we call the AFM-delete option. But if you bring us an HSV, which doesn’t have AFM at all, then you don’t need the delete kit.” 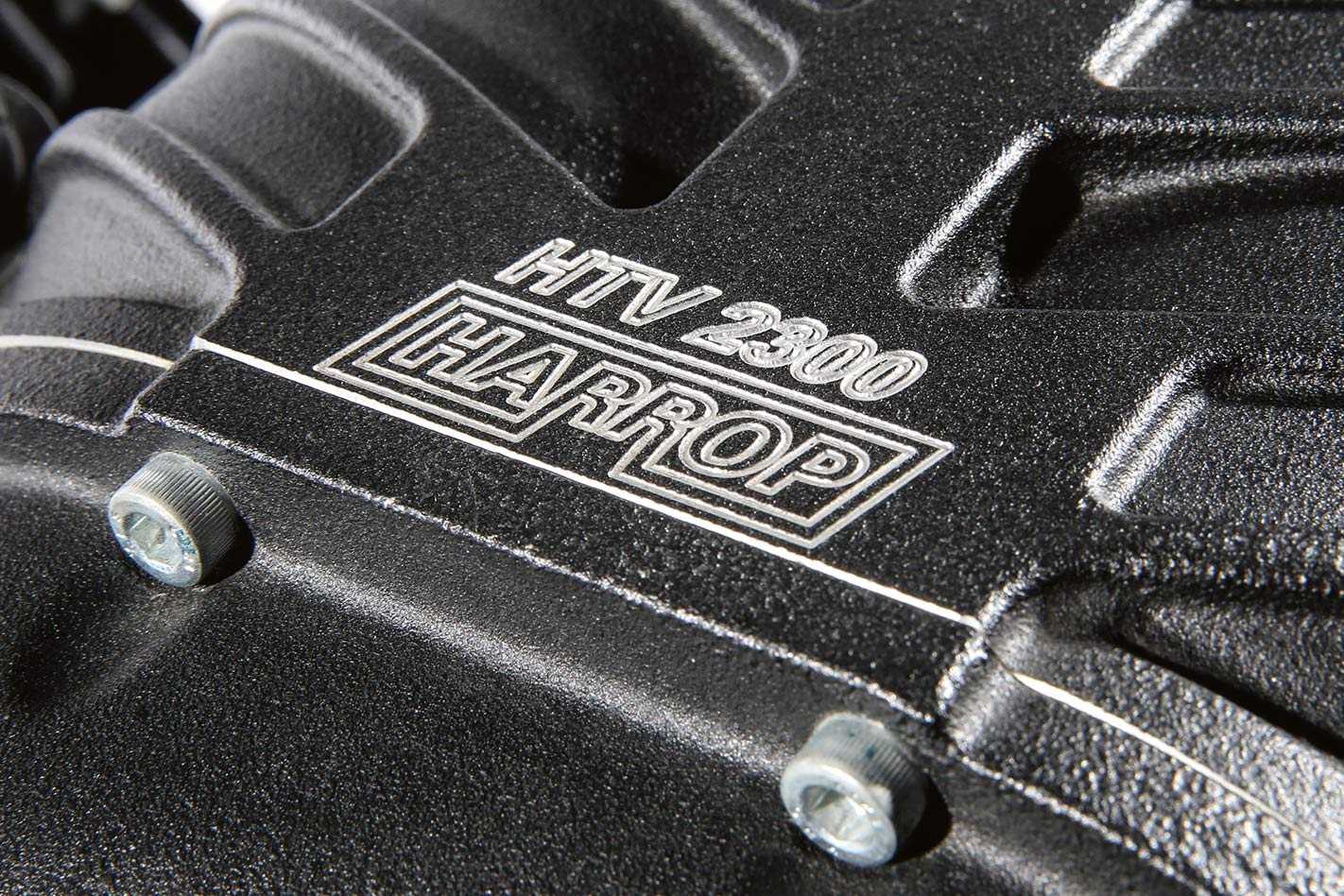 The Camshaft Kit adds about $3000 to the 325 Pack price, and you need to hurl another 1200 notes across the counter if you need the AFM-delete hardware. But for that, you get another generous boost of around 30kW.

“The cam in this car is more of a utility cam, too,” Leigh says. “We’ll supercharge this engine down the track, so it’s more of a blower cam than an NA stick. But it idles really well; if you didn’t know it was in there, you’d probably never guess it was cammed just by listening to it.”

Just before went to press, the Harrop lads managed to lay down some numbers at Heathcote Park Raceway with the new cam and the difference was remarkable. 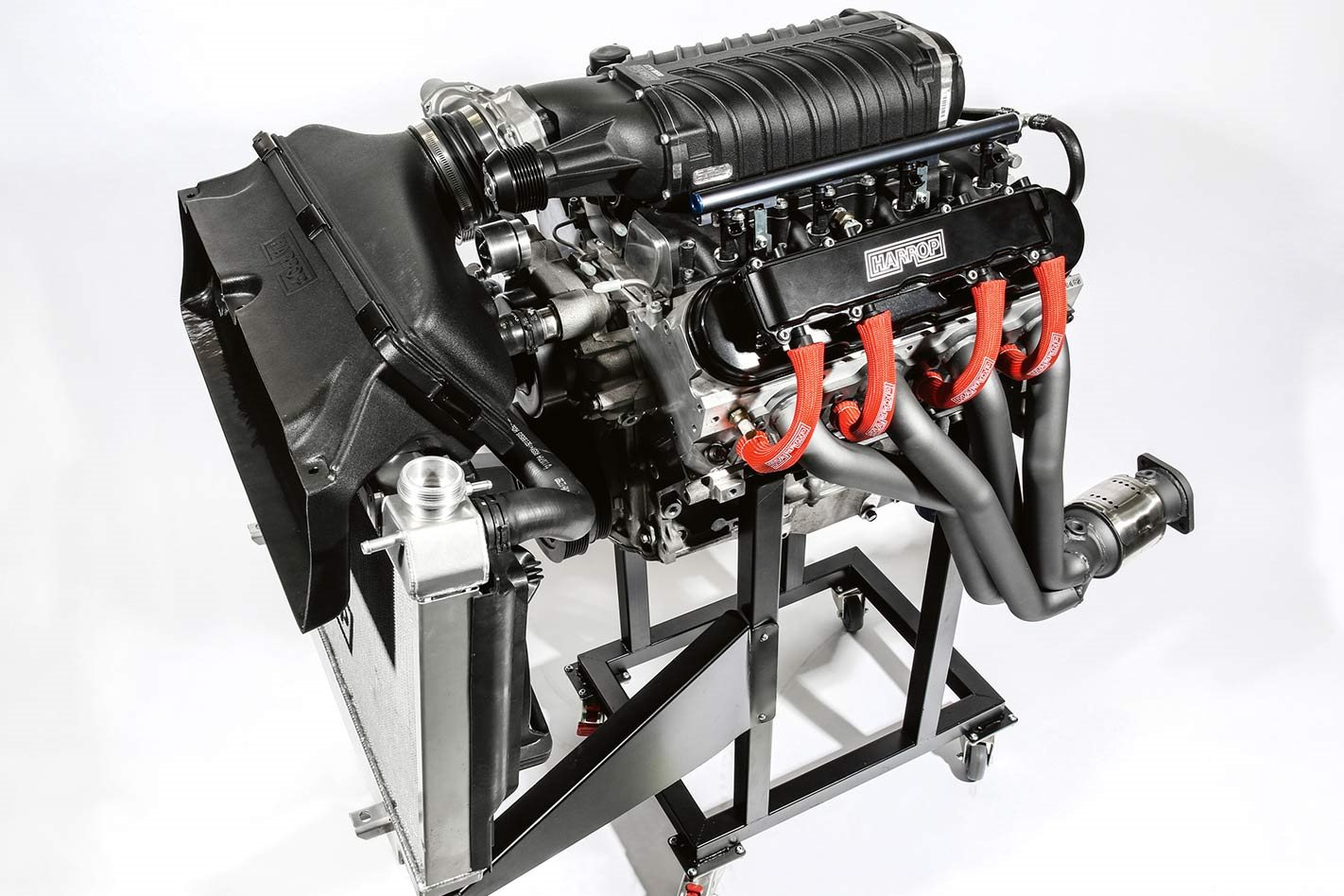 “With the Stage Three kit, the 325kW plus cam package, it ran a 12.37," Leigh says. "The day was about ten degrees cooler than with the 325 package, but that's still seven tenths quicker."

That's a healthy increase in straightline performance by anyone's measure and well into HSV Clubsport territory.

So what’s next? Well, the guys have a Harrop 2300 supercharger sitting on the bench, and then there’s a built seven-litre engine waiting to go in as well; first normally aspirated and then with another 2300 pump bolted on. 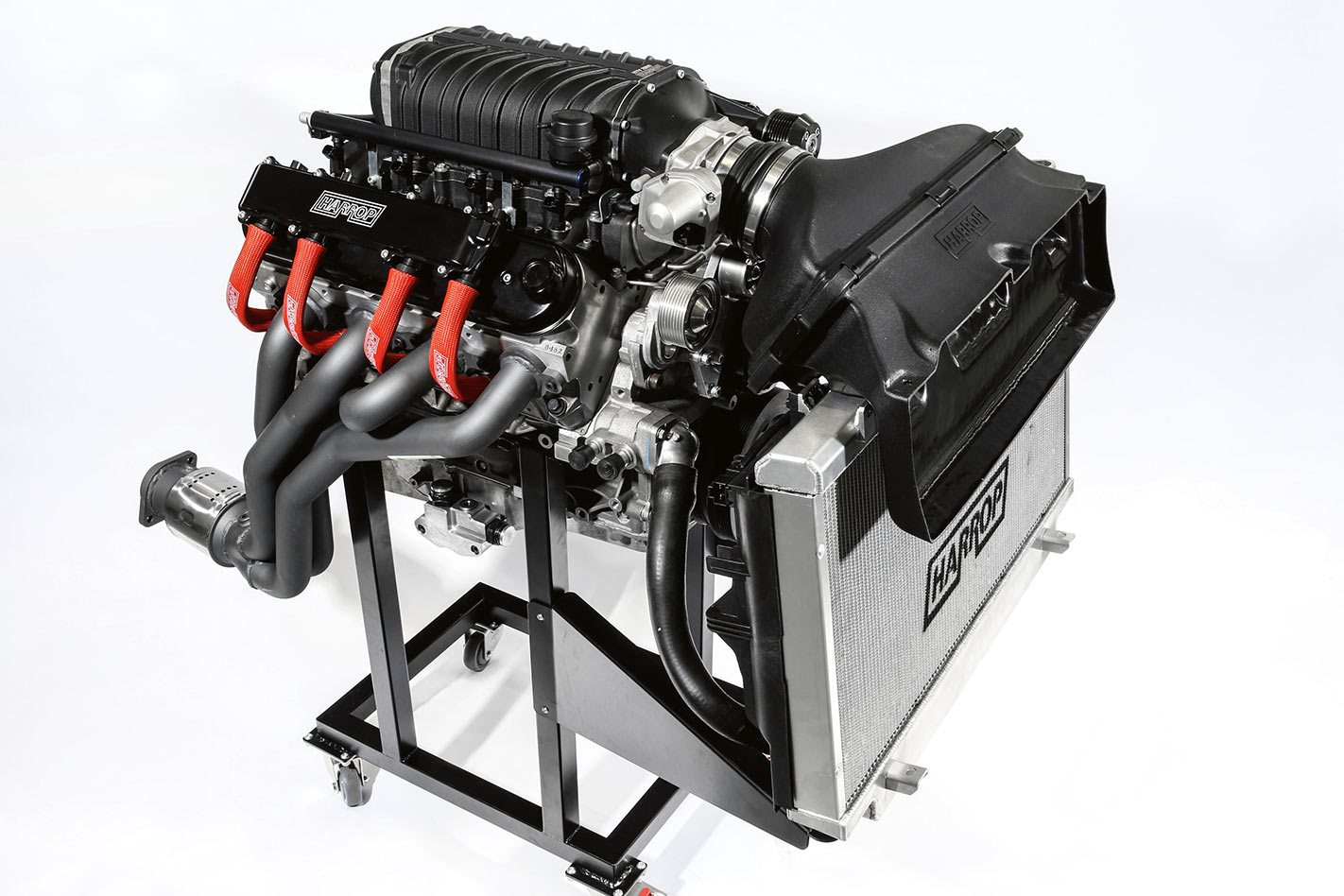 The guys have elected to make all the quarter-mile runs with United E85 to keep the fuel consistent across all the modifications, because the ultimate goal is to bolt in a blown seven-litre for the ultimate in dragstrip destruction

“Ultimately, the aim is to have a quick car that shows people what can be done,” Leigh says. “At the same time, we want to demonstrate that you can still have a stock six-speed auto and make it all work without the hassle of converting to a Turbo 400 and all the other things people are resorting to. By the end of things, we’re expecting to have about 450kW at the wheels, but I’m not going to speculate on 400m times.

“These big, heavy cars take some real driving to get them off the line. I’ve been doing the driving so far, but by the time we get the big motor in it, we might have to find another driver. Maybe a race driver.” 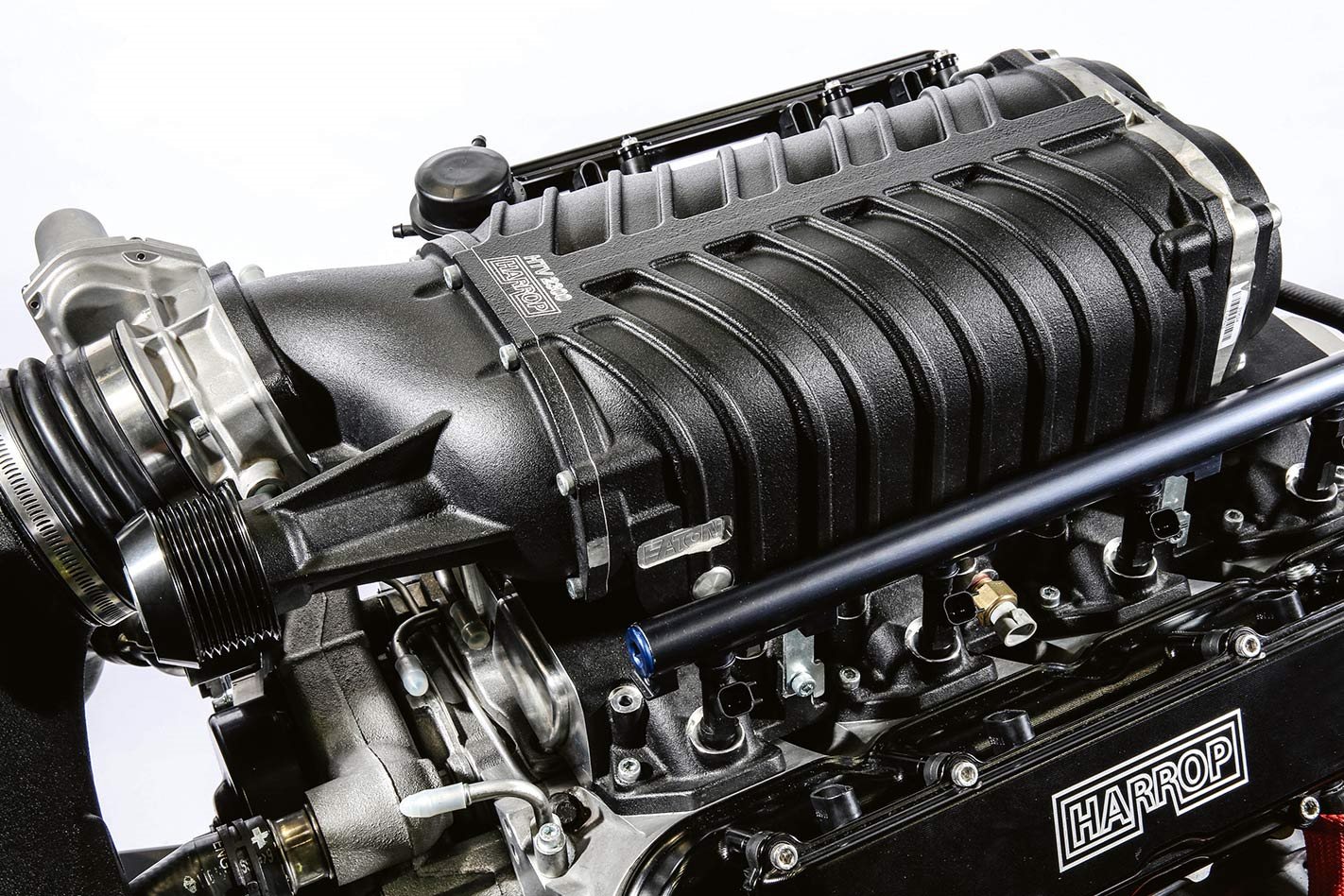 Now they've run 12.37 with the camshaft upgrade, the next step is to add the Harrop 2300 supercharger and re-tune the factory ECU to suit. The guys expect more than 100kW extra from the bolt-on blower

And the time frame for all this?

“Now we've got the camshaft testing done, the blown version of the six-litre engine should be done by MotorEx [late July '15 in Sydney].”

The end-game – the blown version of the seven-litre – should be pounding the streets by about Christmas time.

NUMBERS GAME
Here are the actual dyno figures for the two batches of mods Harrop Engineering has already completed (all figures on E85 fuel). 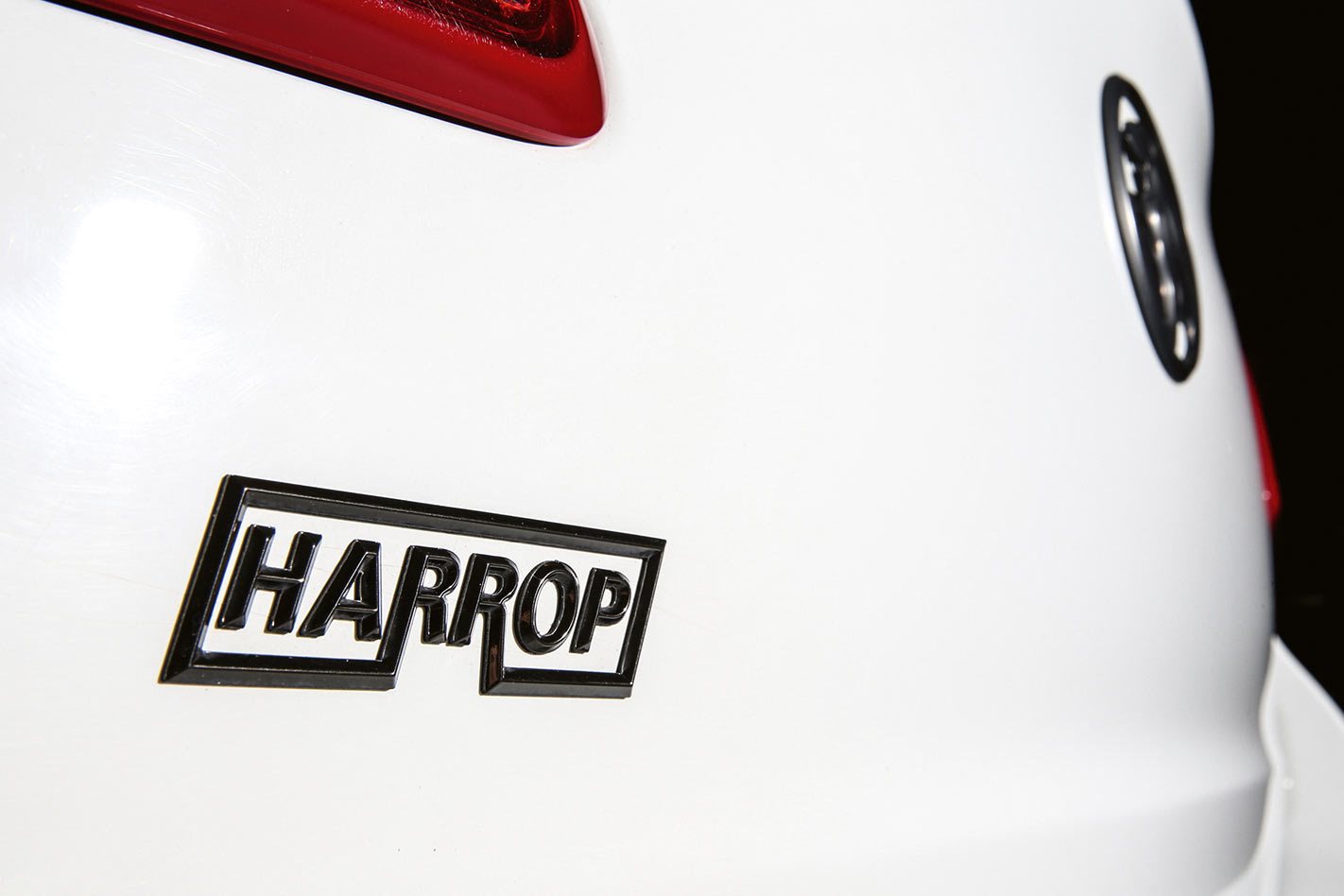