It might be a little rough around the edges, but this Hemi hot rod is built for driving - hard!

This article on Paul's Ford coupe was originally published in issue no.14 of Street Machine's Hot Rod magazine, 2014

AFTER building a couple of very stout street machines, Paul Easthope found his way into the world of hot rodding. He didn’t just dip his toes in either, he jumped in head first and has just finished his second all-steel hot rod. What makes it a hot rod? Well, it’s hard to argue with a 392 Hemi, TKO five-speed and Winters quick-change. It’s light-on for creature comforts, but heavy on the horsepower and attitude. 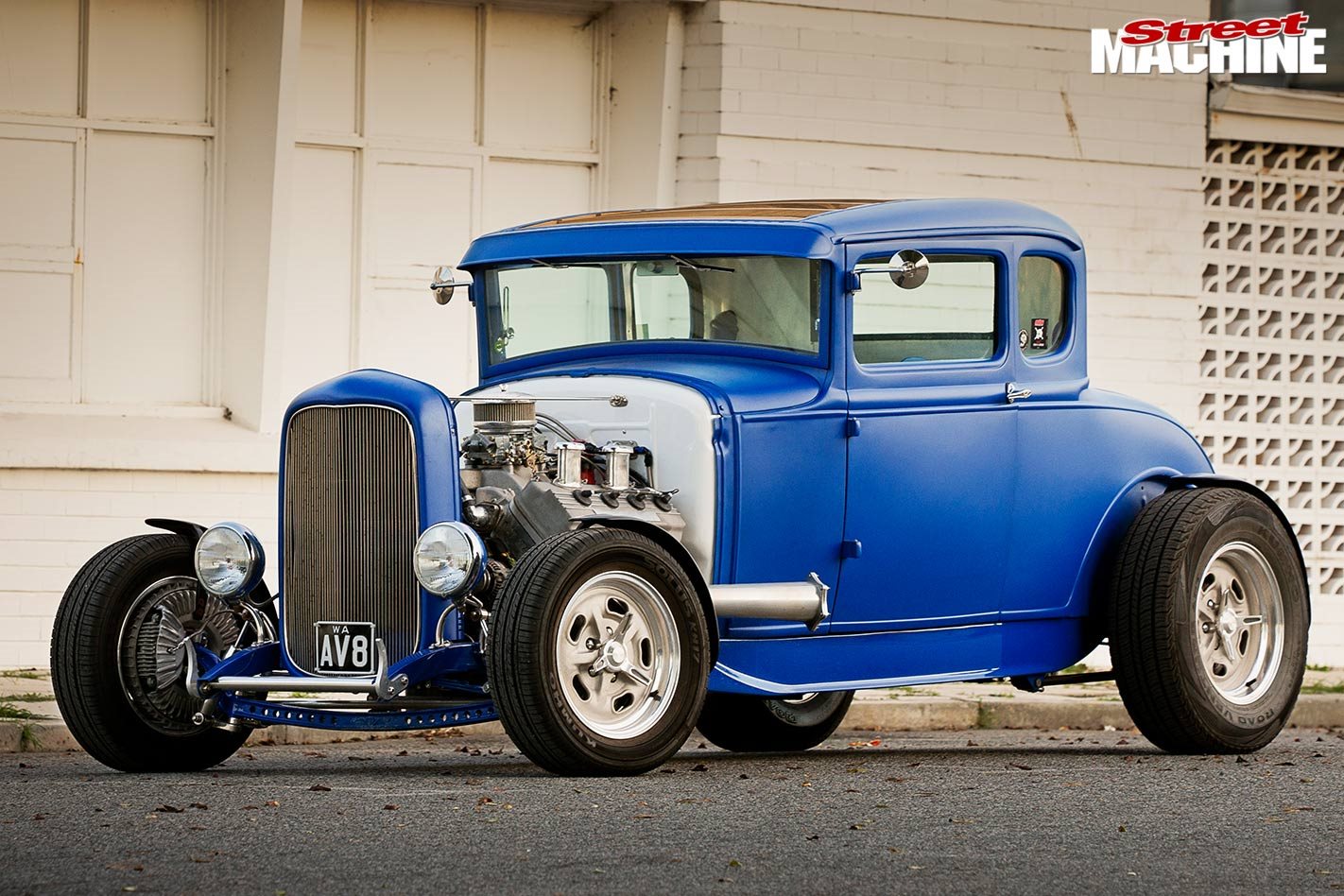 Paul must love his Fords; those first two were Falcons of the XB variety. The first, a GS coupe, was fitted with a 393 stroker, top loader and nine-inch. This was 20 years ago, when you couldn’t just go and grab yourself a kit off the shelf: “It was an offset-ground crank, Chrysler 265 Hemi rods, Chevy pistons with the crowns machined off them. It went like a scalded cat.”

Paul doesn’t have any quarter-mile times to prove it, but that’s mainly because he never got a chance. Someone else just had to have that car – problem was, he didn’t want to pay for it. The thief got his just desserts when he decided driving into head-on traffic was a good idea to shake off the police that were in hot pursuit; both he and the car died that day. But the driveline lived on in an XB GT sedan, and then life took over for a while. 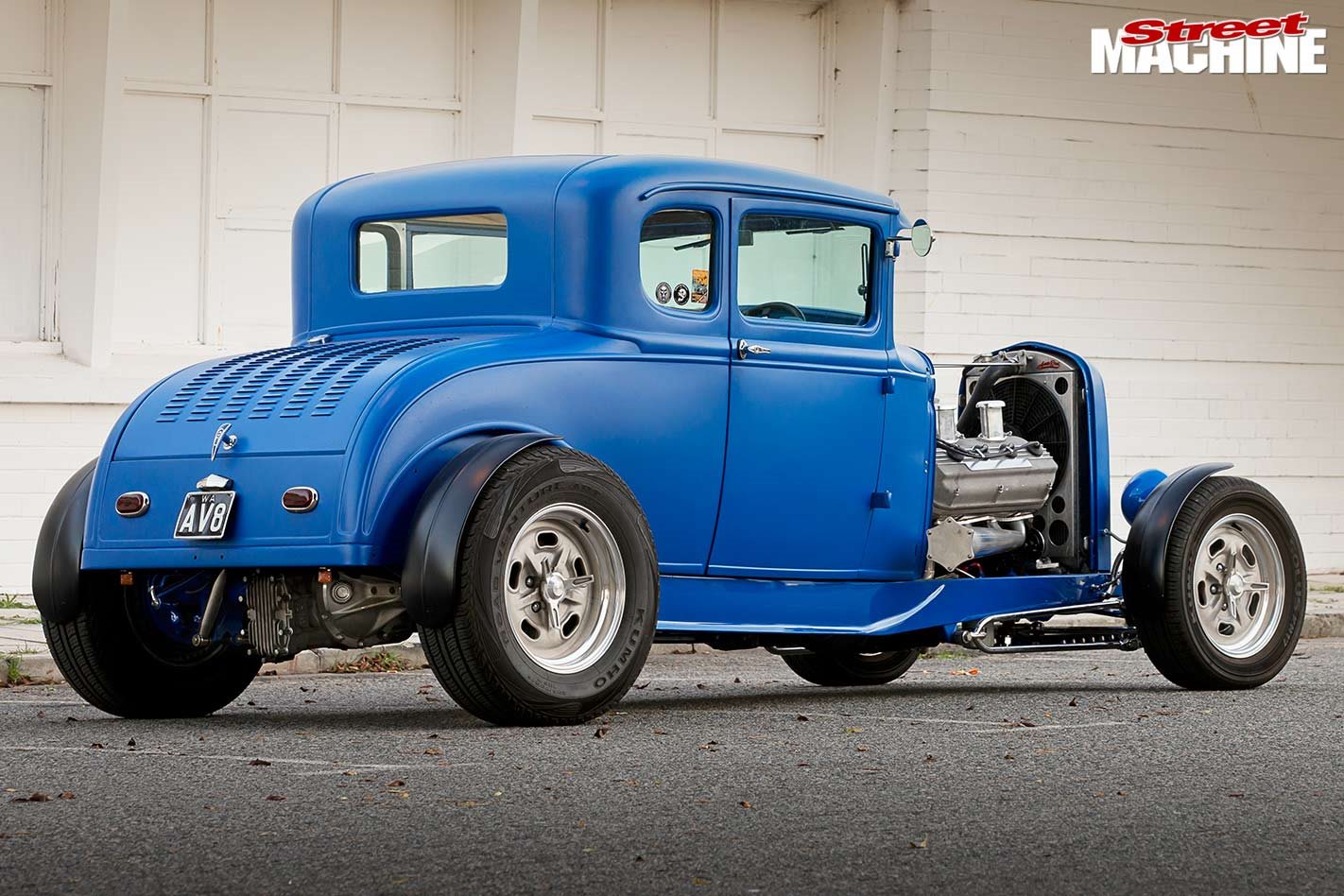 Fast-forward a few years and Paul — in his previous life as a panel beater — was asked to help a bloke out with his hot rod project. He liked what he saw and ended up building a nice little ’31 Ford roadster with a Windsor in it, but he wanted more. Then his lovely wife came with an ultimatum. “My wife said to me: ‘Sell the roadster and pay off the rental property and once you’ve paid that off, you can do what you want.' But apparently, that doesn’t mean 'do what you want'.”

So, with the real estate situation under control, Paul started putting the pennies away to build the next project. It would be another Improved A on a ’32 chassis, but this time a coupe, and while all of Paul’s other projects had been Powered by Ford, everyone knows that putting a Hemi in anything makes it better — regardless of what brand the car is. 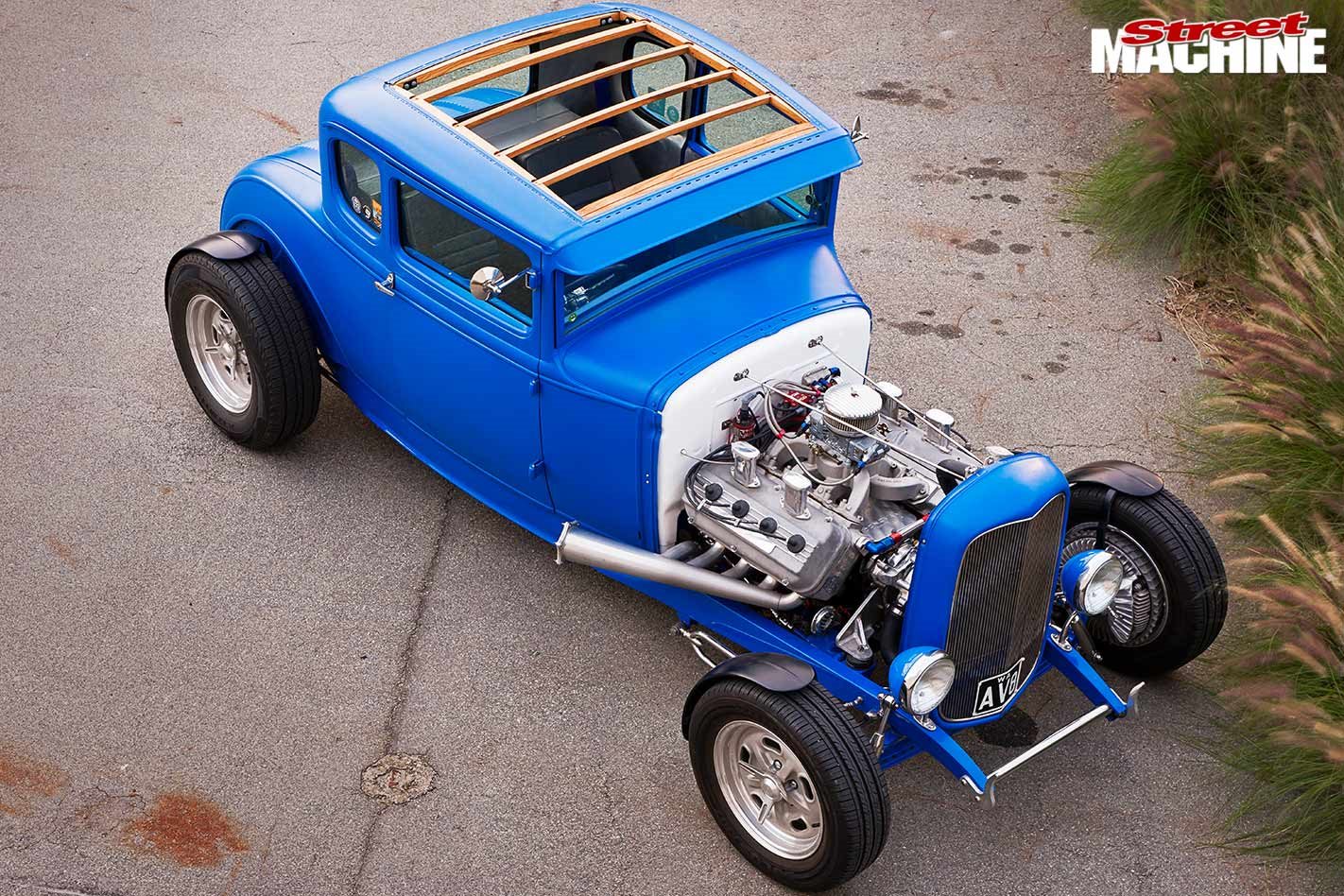 Paul got hold of the body first, which is original steel, and then went shopping for a chassis. For a good hot rod project, you need to start off with some decent bones, and it’s tough to go past the quality of Ian Eliason’s work at Li-Low Autotech. Paul had used one of his chassis on the roadster and he had no hesitation going back: “It’s an absolute corker, I wouldn’t get one off anyone else. It was a rub down with 80, 180 and then we went over it with 240, etch-primed it wet-on-wet and then painted it. That’s how good his work is – it’s unbelievable.” 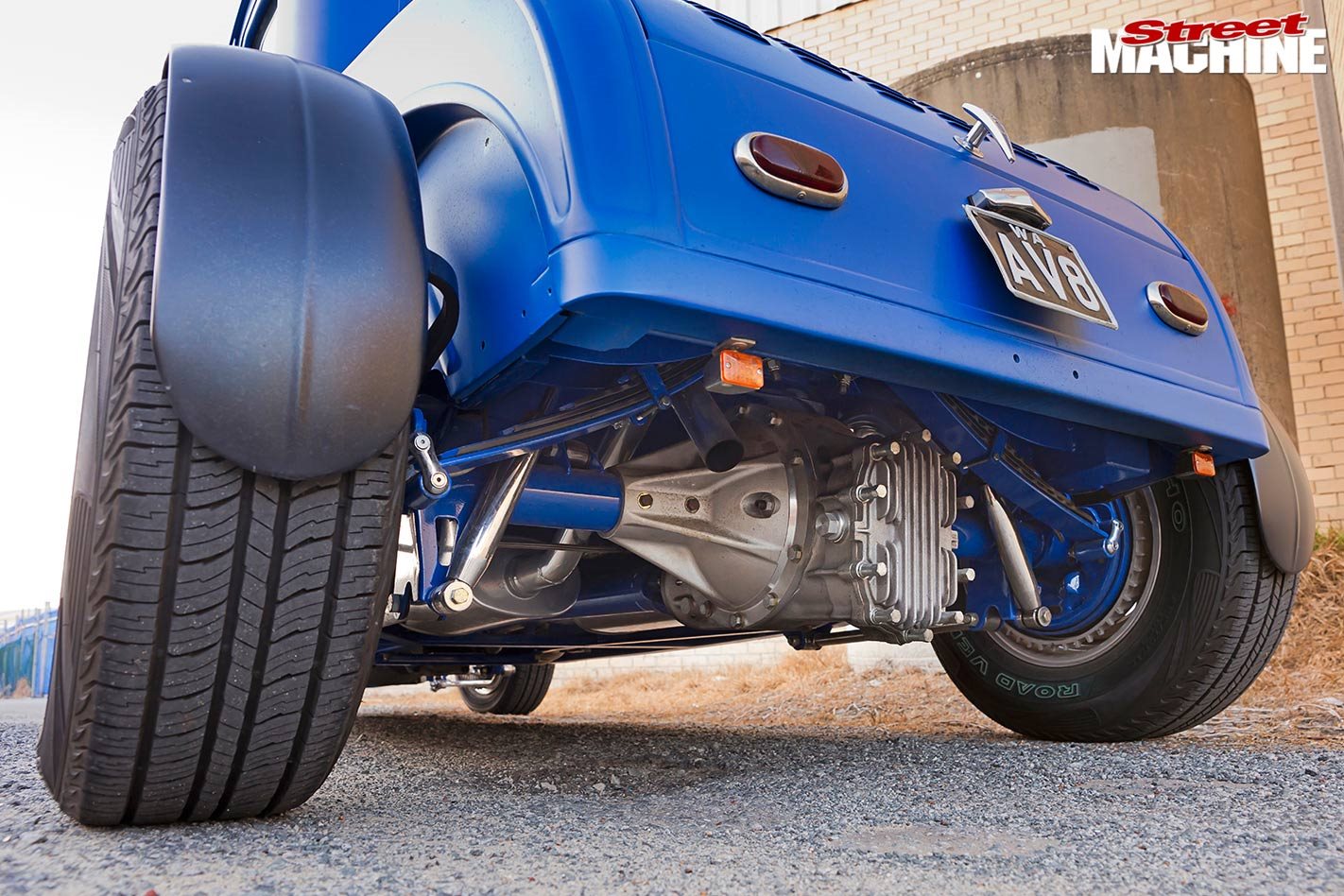 The Winters Champ quick-change makes all the right noises and looks tough as nails as well. Tube shocks and a Model A spring are right on the money too

It arrived a complete roller and set up for the driveline. Ian could get hold of a Hemi and a TKO five-speed, so all Paul had to send across was the adapter kit to mate the two together. Paul then ordered that gorgeous Winters quick-change from Rocket Industries and they shipped it straight to Li-Low where Ian fabricated the stainless four-bar rear. Rod-Tech supplied the front end, which consists of a dropped and drilled Super Bell axle and stainless hairpins. The Falcon discs are disguised behind a set of Al Fountain’s Buick-style finned drums, and the rear drums copped the same brilliant disguise. 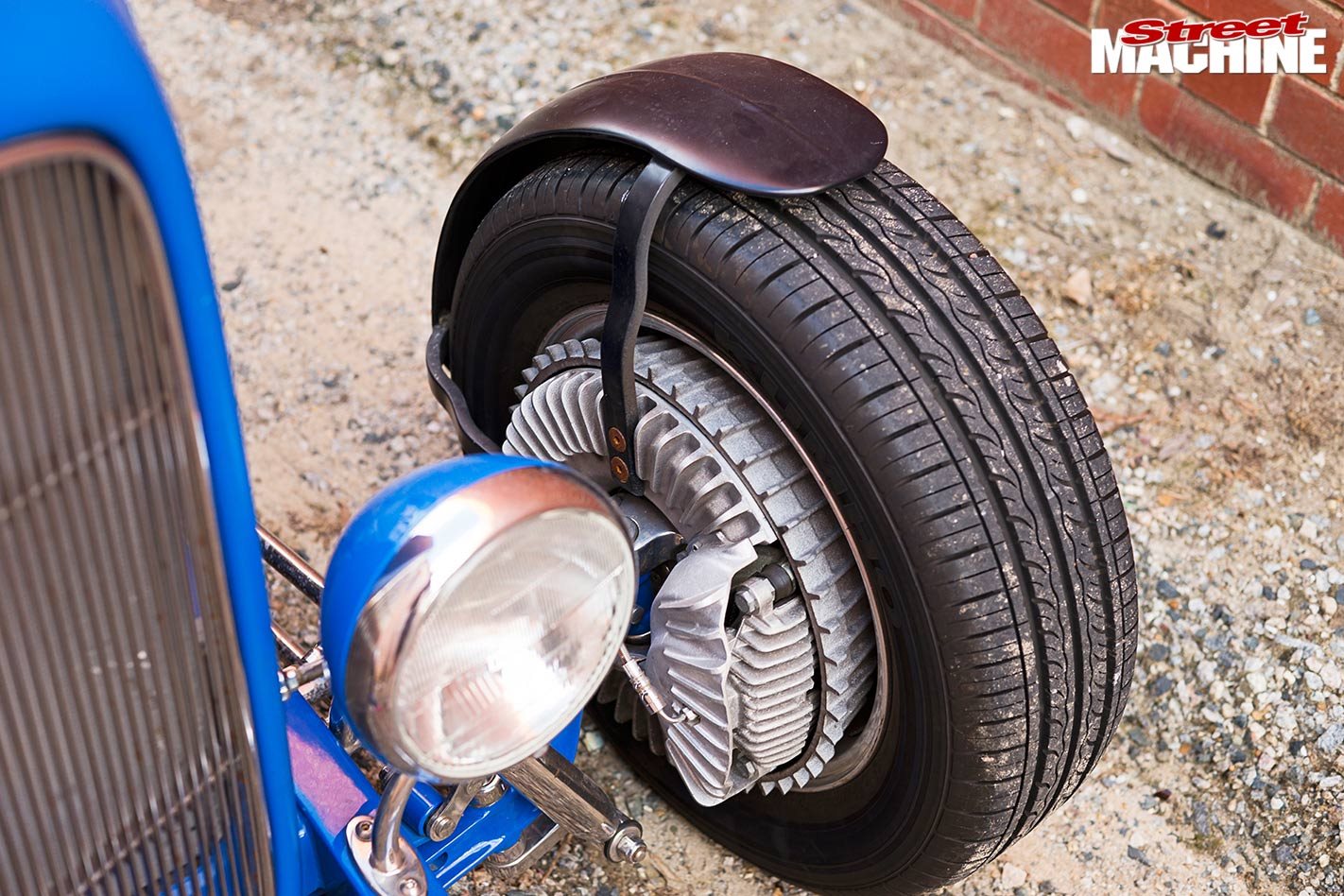 The disc brakes and finned Commodore calipers are nicely hidden behind some Al Fountain covers. A matching set of finned drums were used on the rear as well, also from Al Fountain

Those with a keen eye may have noticed that Paul has managed to squeeze the Hemi into the tight confines of the Model A without having to butcher the firewall too much. This was only possible because of the extra three inches of wheelbase Li-Low have engineered into their chassis designs. The only modification required was to flatten out the bottom of the firewall — sometimes called a tummy tuck — and make a small indent for distributor access. 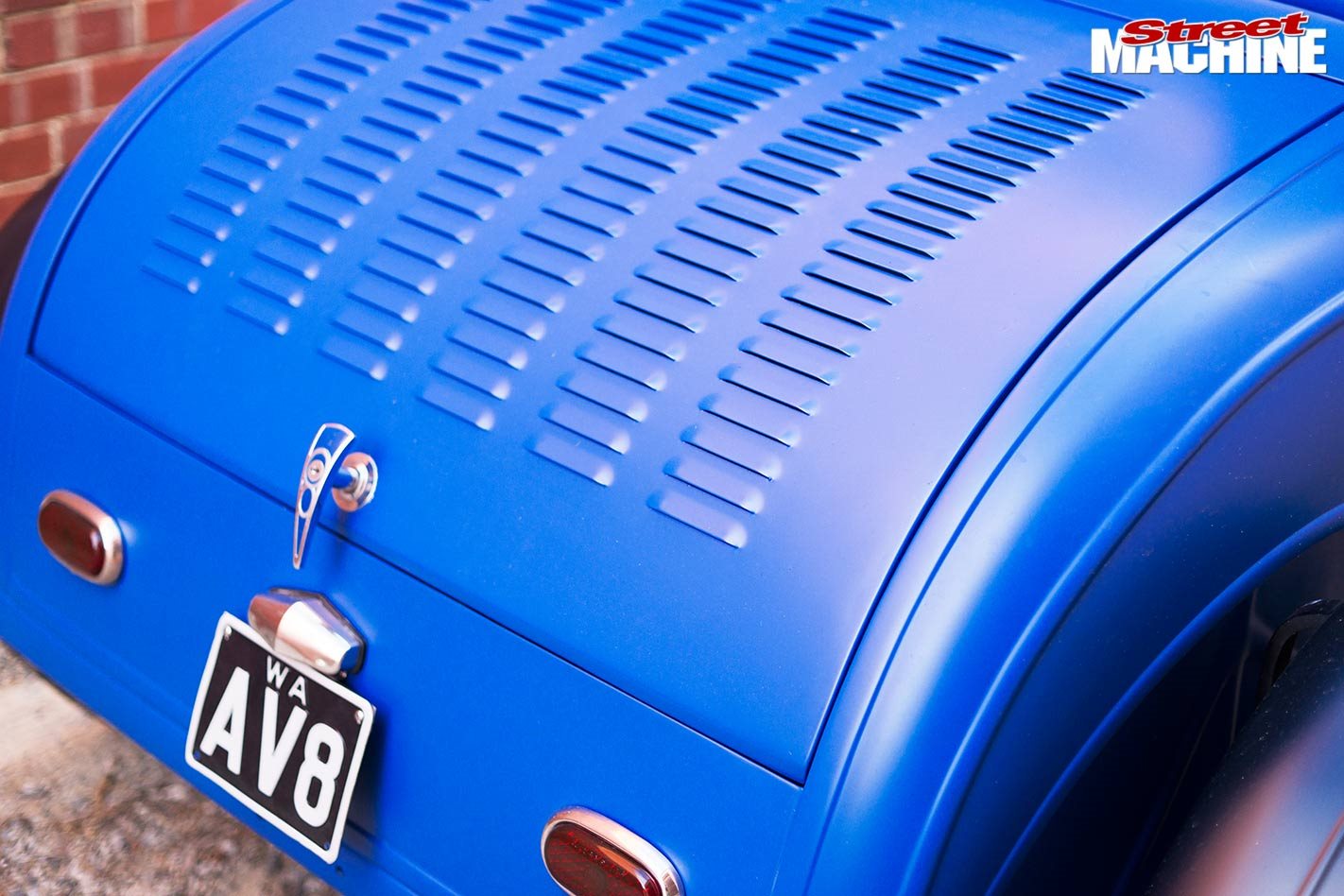 Six rows of louvres break up the deck lid and add some hot rod attitude, while the simple addition of ’46 Ford tail-lights makes a nice change from ’39 teardrops

The body wasn't quite so easy, having been patched and repaired in many places and then covered with a coat of red lead primer. Paul summed it up fairly concisely when I asked him what the body was like when he got it: “Fucked! Someone had done some rust repairs on it, but they’d done a shit job. It looked all right, until I stripped it back. All of the patch panels had to come off, they’d been overlapped. It wasn’t my cup of tea. 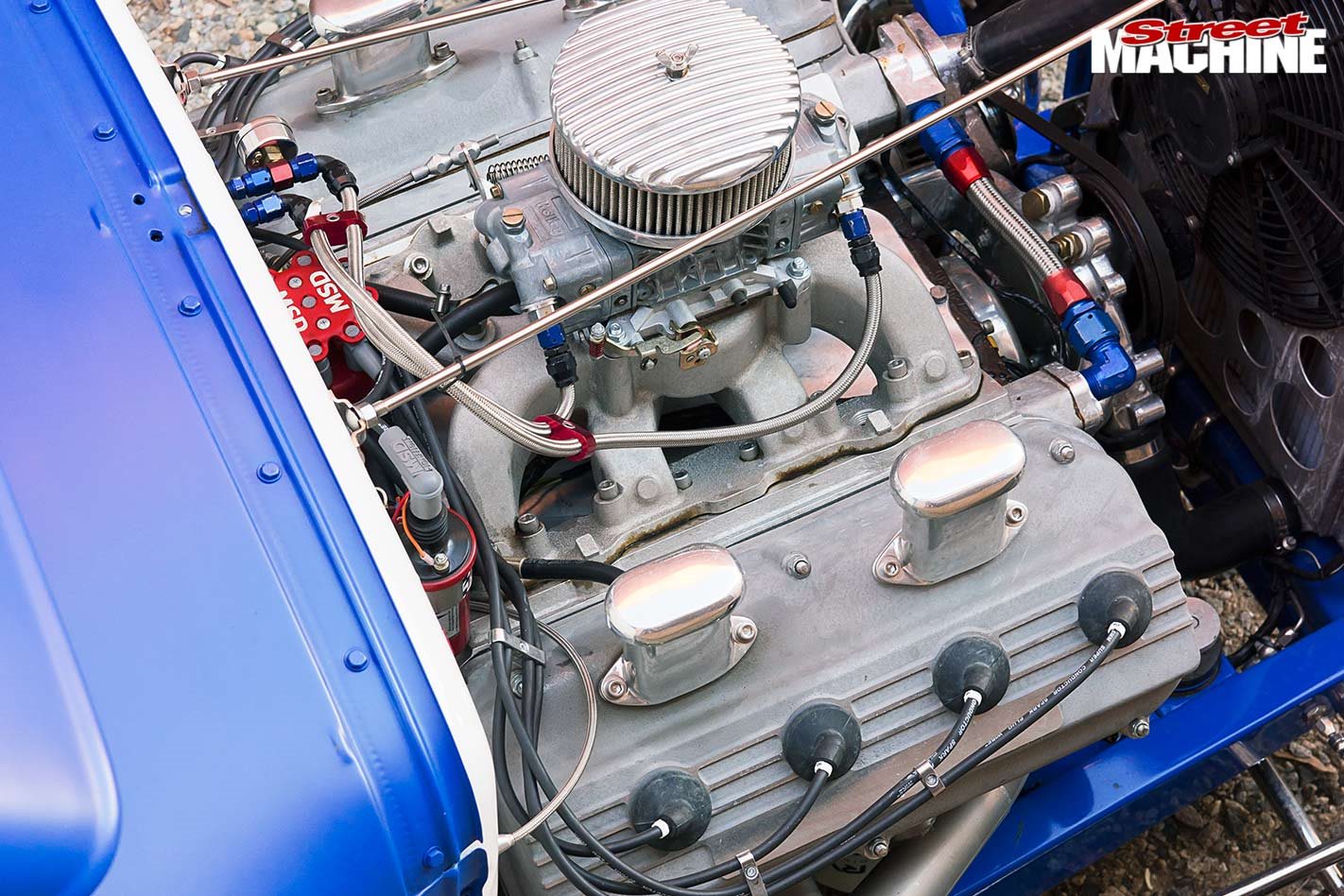 Built for go and not show, the 392 Chrysler Hemi sports a swag of Hot Heads gear and is good for over 500hp. In a 1200kg car, that’s a pretty handy power-to-weight ratio!

“I chopped it in the driveway at home,” Paul continues. “I read in a magazine that Jimmy Shine chopped an A-model and thought, if he can chop one, I can chop one. Started at eight o’clock in the morning and finished welding at about five o’clock in the afternoon. Then I had to do all the garnish moulds.” 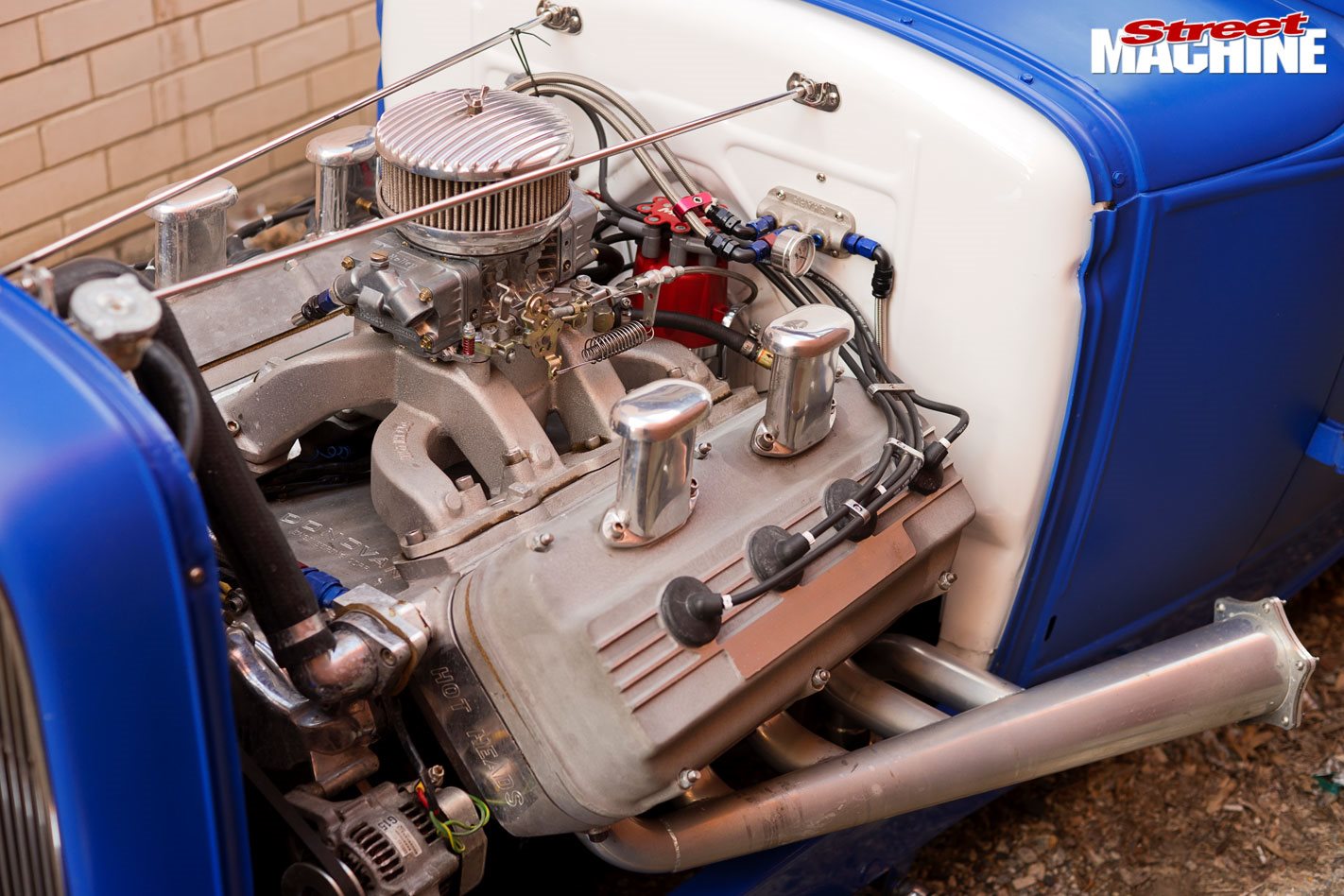 Where it all starts to get serious — especially in the wallet-emptying department — is in the engine bay. That Hemi isn’t some clunker that Paul yanked out of some old Chrysler barge. It’s the Big Daddy 392 and it’s had a pretty decent tickle-up thanks to some lengthy conversations with the people at Hot Heads. Not surprisingly, it wears a pair of their alloy heads and four-barrel dual-plane intake, but inside it’s got plenty of the good stuff too.

A solid Isky cam with .505in lift and 254deg duration gets it sounding like a hot rod, while the Ross forged pistons and forged H-beam rods give the internals some extra strength. It was built by ex-South Oz drag racer Phil ‘The Grinch’ Reilly — I don’t think anyone else calls him The Grinch, just Paul — and he knows a thing or two about hot Hemis and making cars go fast. 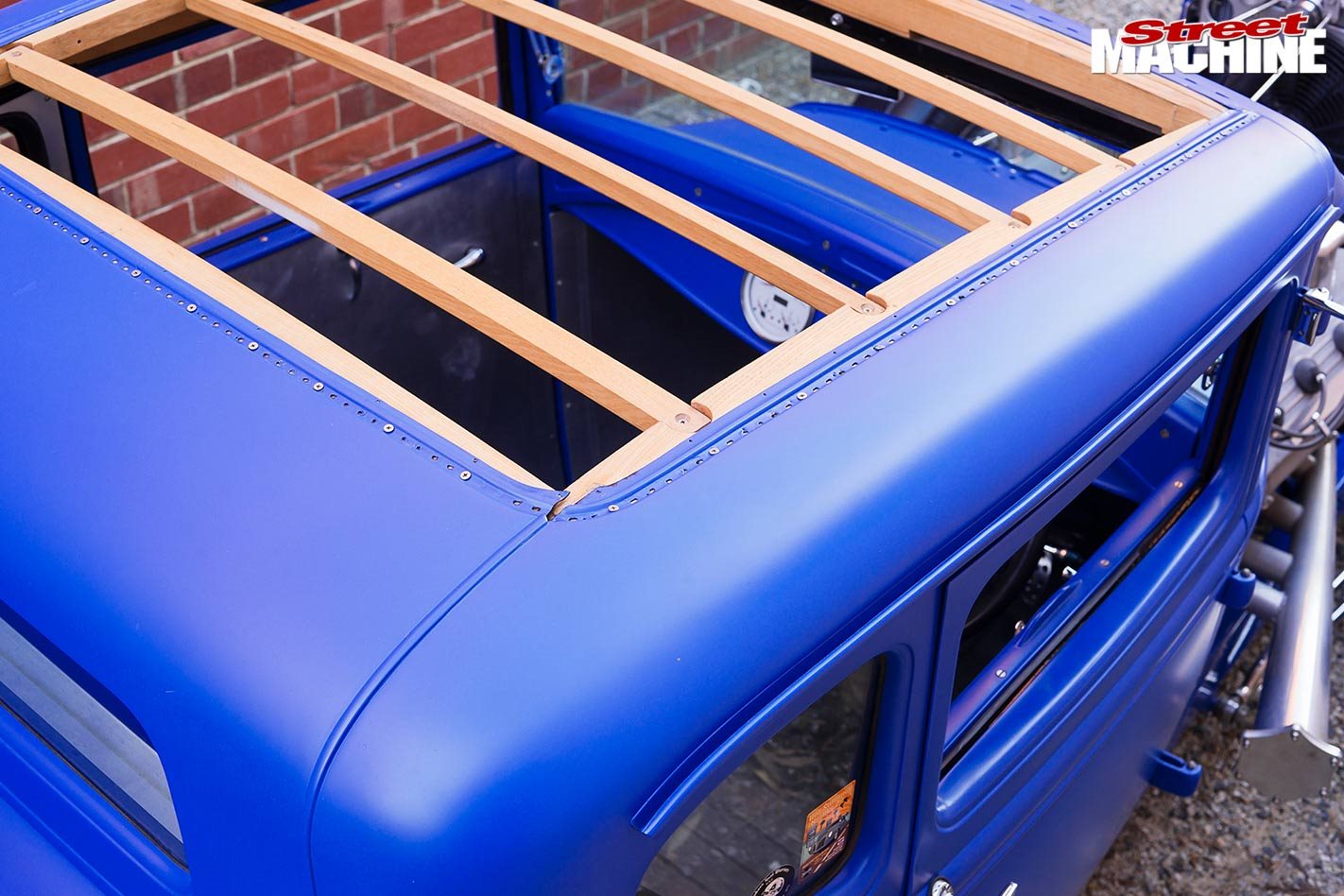 Paul put his skills as a carpenter to good use when he assembled the roof bows. He’s got plans for a louvred aluminium panel to cover the hole, but the weather’s nice enough in Perth that you can get away with it for most of the year

Although a set of genuine Halibrand kidney-bean mags was on the wishlist, dealing with Halibrand was a bit of a struggle, so a set from PS Engineering are a perfect replacement. The wheels, blackwall tyres and white firewall nail the late-60s vibe that Paul was chasing. 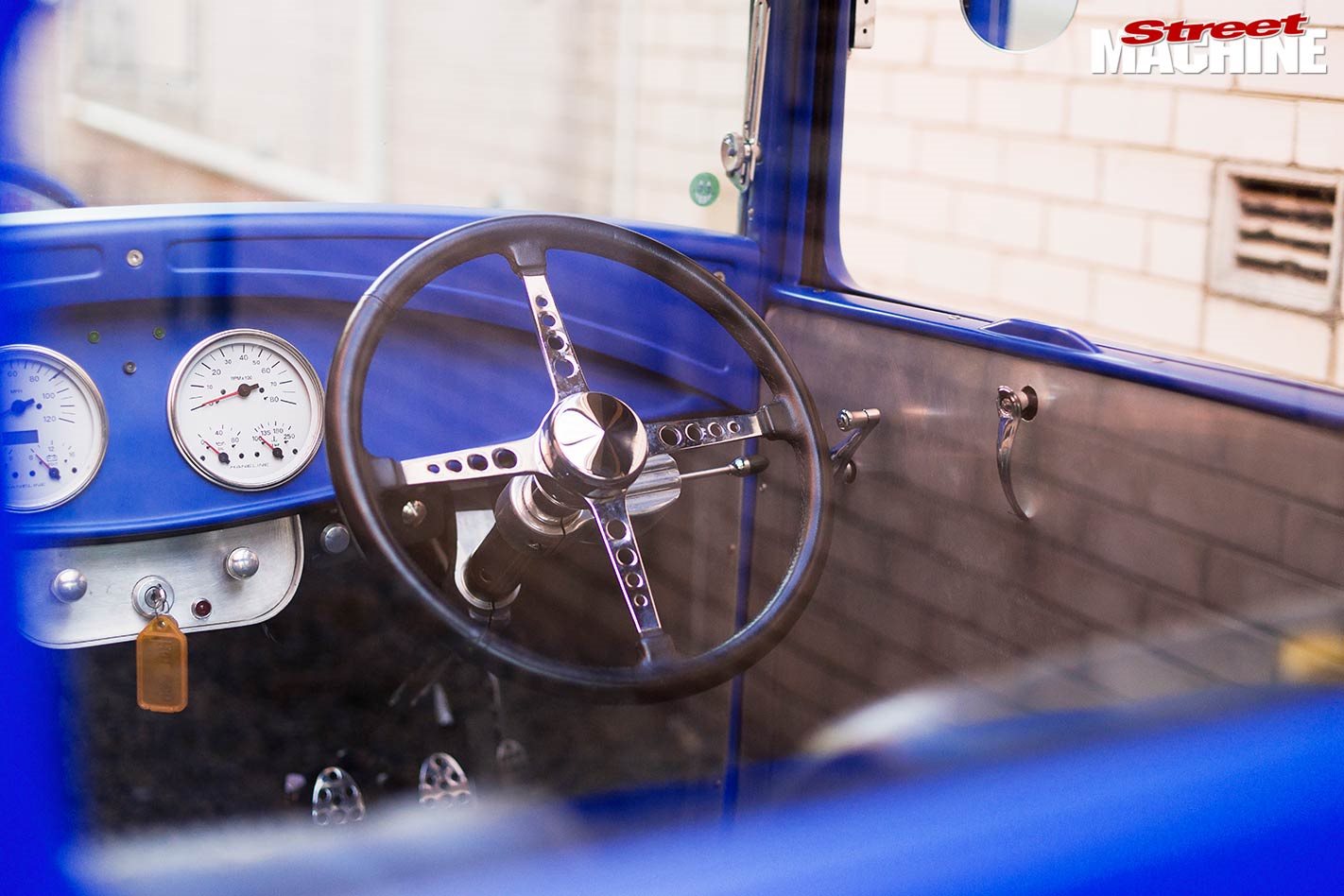 A four-spoke sprint car wheel from Limeworks suits the late-60s styling of the car perfectly. A couple of Haneline 3-in-1 gauges keep tabs on all the vitals, while the only soft stuff inside is the carpet and seats

With somewhere north of 500hp, five gears to row through and the quick-change singing its song in harmony with the Hemi’s exhaust note, it’s not surprising that Paul’s not afraid to drive the wheels off it. It might not be perfect, but it’s pretty close to the perfect hot rod. 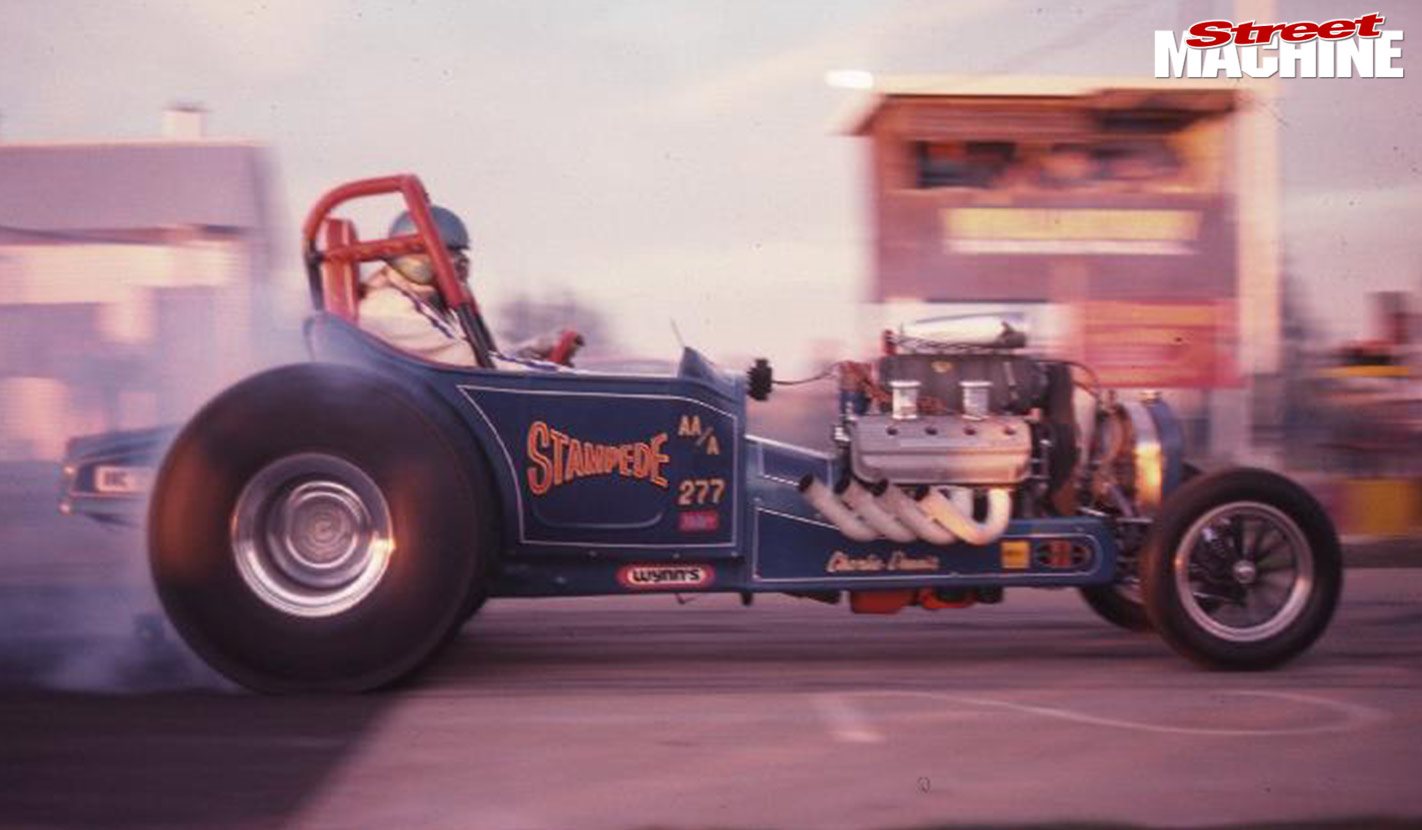 YEAH, yeah, they just smell that way. I know for a fact that Phil Reilly doesn’t smell that bad, considering what he’s been through, but for an old bloke that used to tear up the South Oz drag strips in fuel altereds, he’s doing great. He’s still playing with hot rods and building bad-arse Hemis.

Back in the day Phil raced a few altereds, starting out with ‘The Pig’, which ran a small-block Chev. He then bought ‘Stampede’, the legendary car campaigned by Charlie Dennis, which was his first foray into Hemis. The last one, and most curiously named, was ‘Snorting Arnold’, after the pig from the 60s sit-com Green Acres. 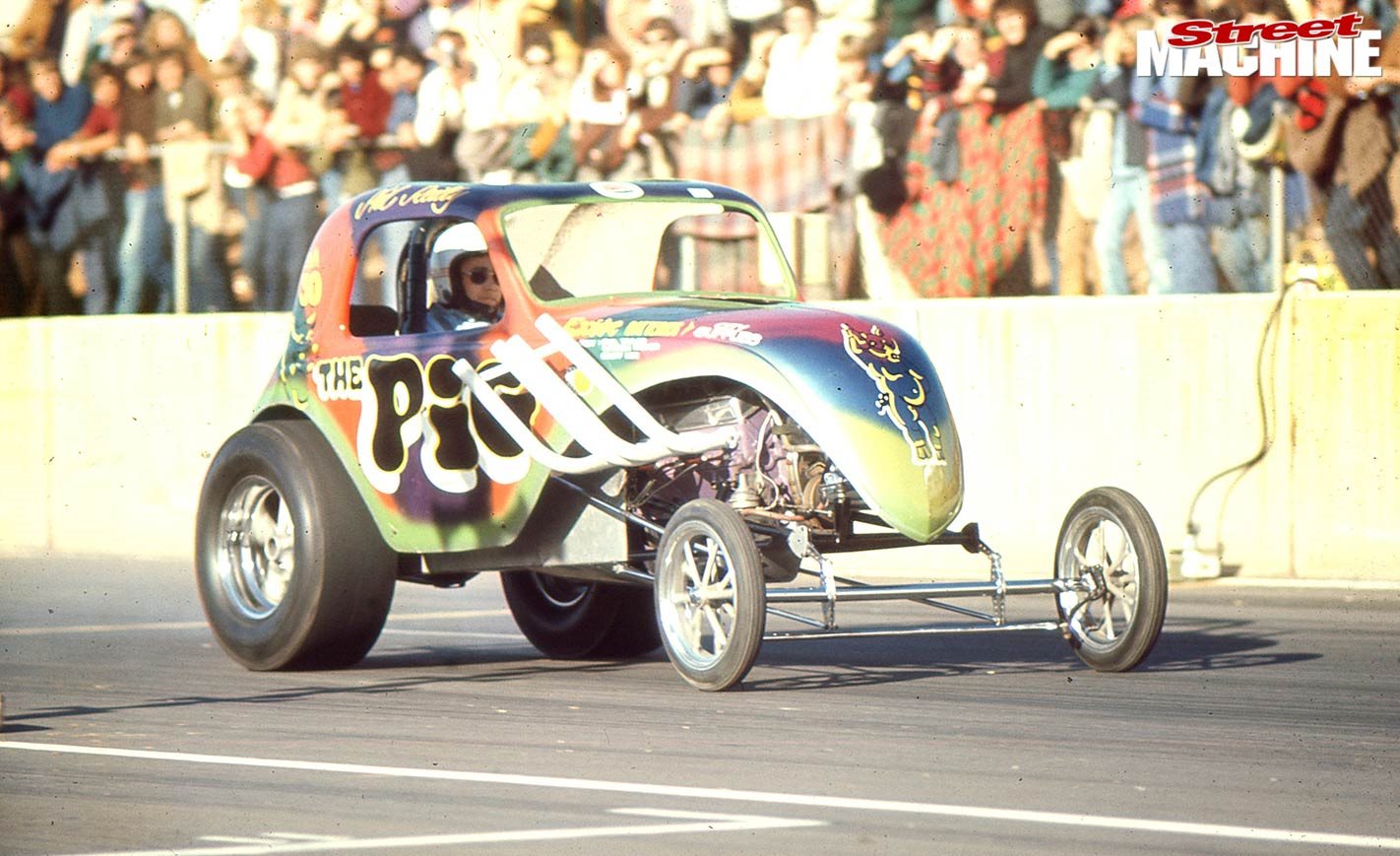 I’m pretty sure Phil was watching it more for Zsa Zsa Gabor’s presence than any great fascination with pigs – although, you never know with Phil.