This article originally appeared in the Oct-Nov 1991 issue of Street Machine.

IF YOU think this is just another Gemini wagon, you’re wrong. Behind those diamond-black panels and tinted glass is a mind-boggling assortment of computer trickery. 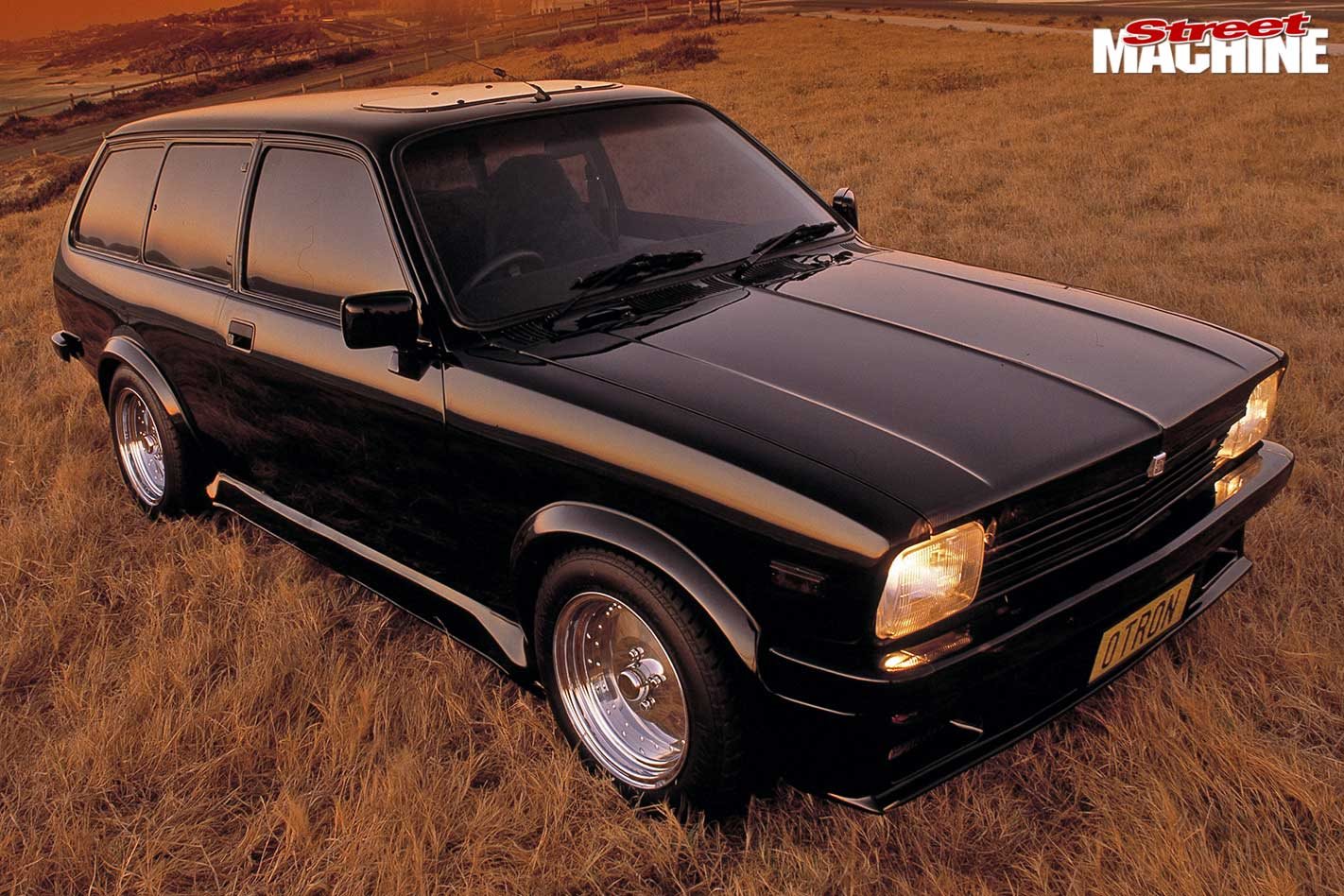 Just as we were walking past, this little Japanese guy spoke to us. His voice was stilted, slightly monosyllabic and a bit silly – in fact, it was weird. It’s not often that you get pulled up by a talking car.

“Greetings, my name is Otron,” the voice said. “This is what I do and say. The following parameters are currently being scanned for abnormal conditions. Now scanning: oil system, water temperature, fuel level, brake system, windscreen water, headlights, rear lamps, electrical system…” 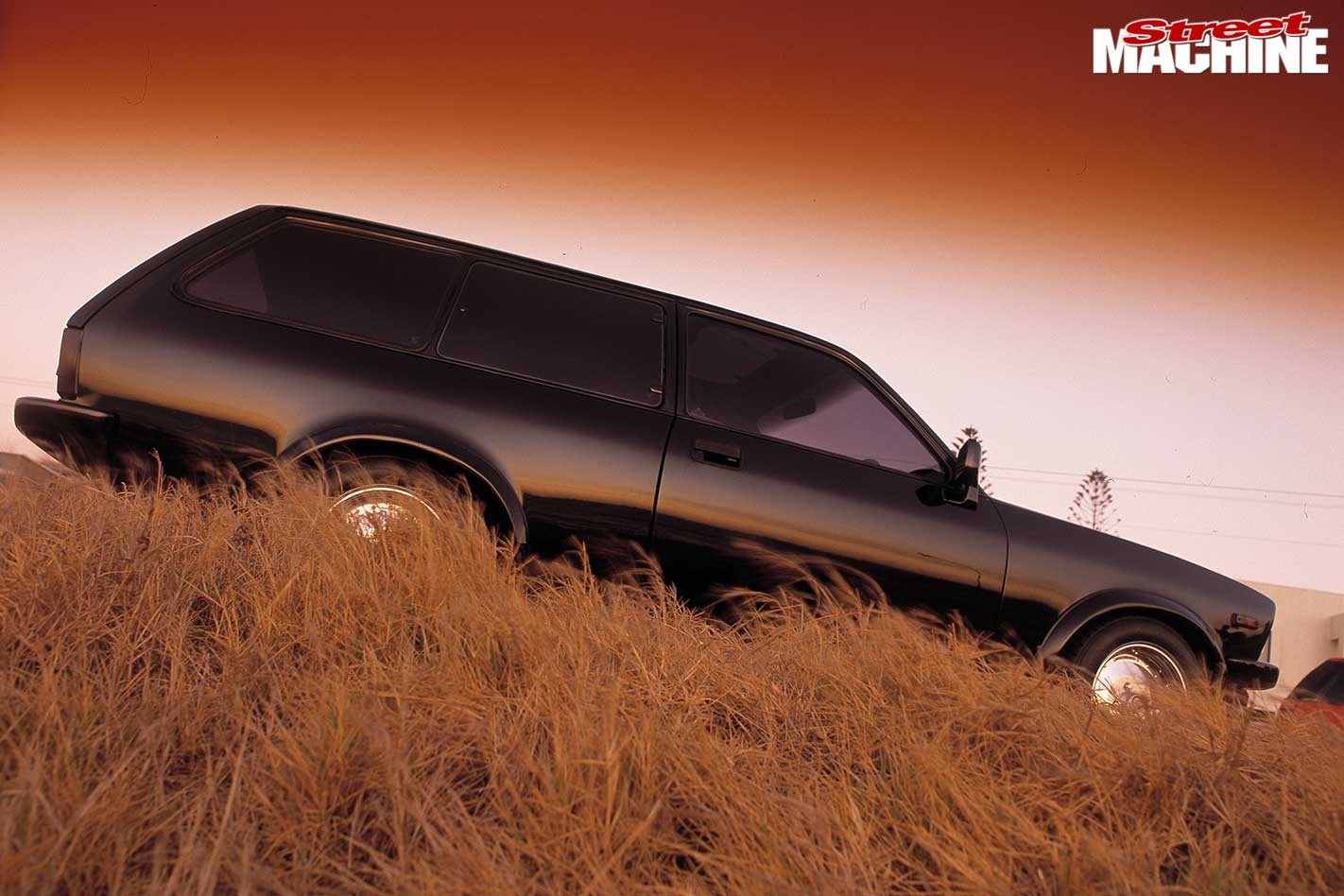 This little bloke was obviously somebody special. But as if he hadn’t convinced us already (our jaws were already embedded in the tarmac), he continued his spiel: “If there is a malfunction then I will say one of the following. Warning: oil temperature too high. Warning: motor temperature too high. Warning: oil pressure too low…” This was no ordinary black 1979 Holden TD Gemini wagon, licence plate ‘OTRON’ – this was a bloody marvel!

The creator of perhaps Australia’s most unusual car is Perth-based electronics whizz, Sean O’Donovan. Sean has spent the last eight years on the project, getting a result that’s nothing short of astounding. 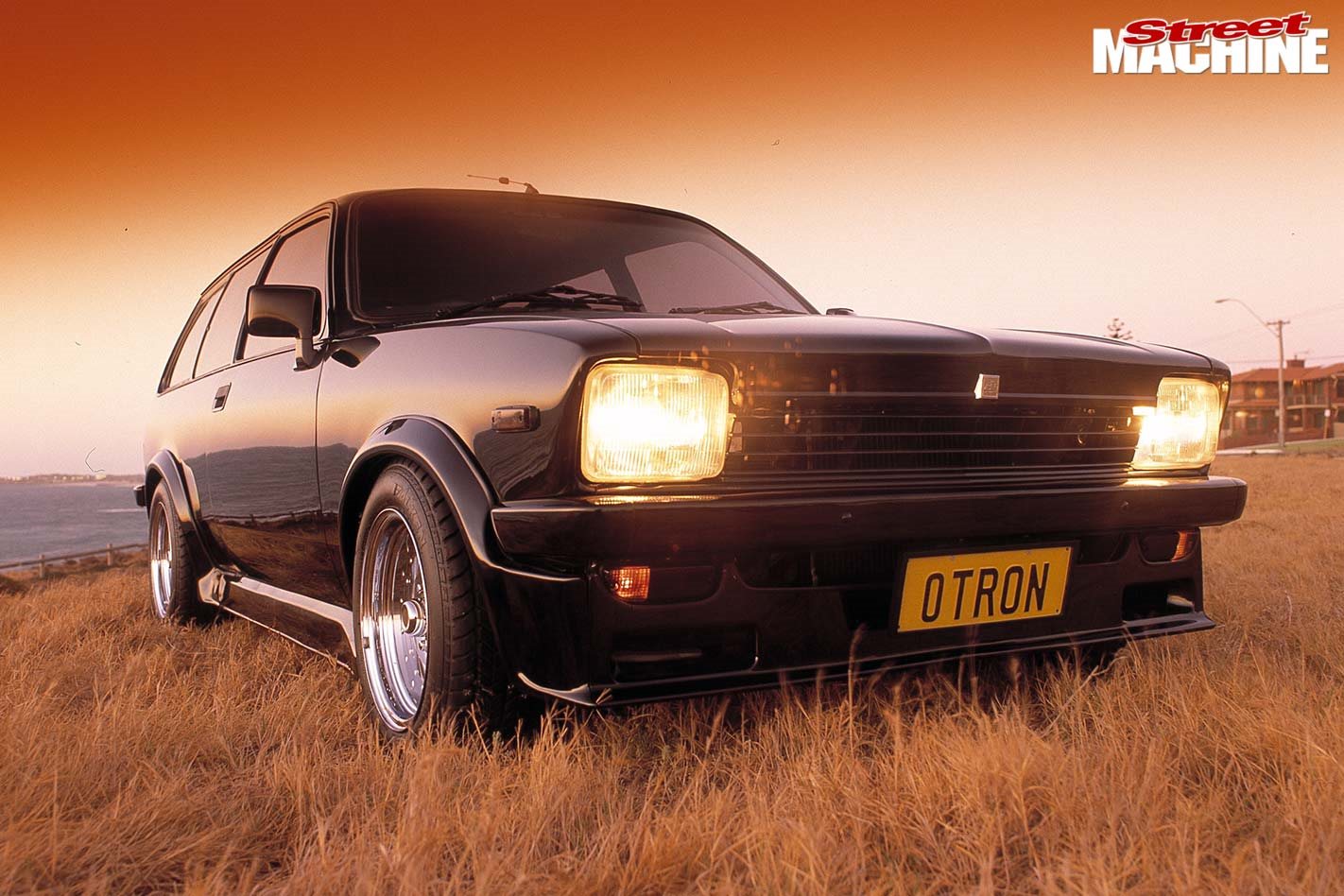 What it’s taken to mould such a brilliant creation into shape has more to do with an extra 900 feet of wire and a lot of patience (from both Sean and his wife Tracey). Most of it comes down to the way Sean has pulled together the LEDs, RAMs, ICs, sensors and diodes that’ve blessed Otron with something ‘normal’ cars don’t tend to have – the gift of the gab.

Read next: The making of Holden's Efijy concept car

Here’s just a quick rundown on what Sean has done. All gauges have had their analogue needles removed, with Sean redesigning the instrument panel to incorporate a computerised digital readout and LED display. Otron’s synthesised voice not only talks to the driver but shows its message on a five-inch TV screen, which, of course, doubles up as a TV. There’s also a computer in the glovebox (with the keyboard on the lid) that can play computer games. And the car isn’t started with something as boring as an ignition key. The car only starts by pushing the right numeric combination on the keypad. 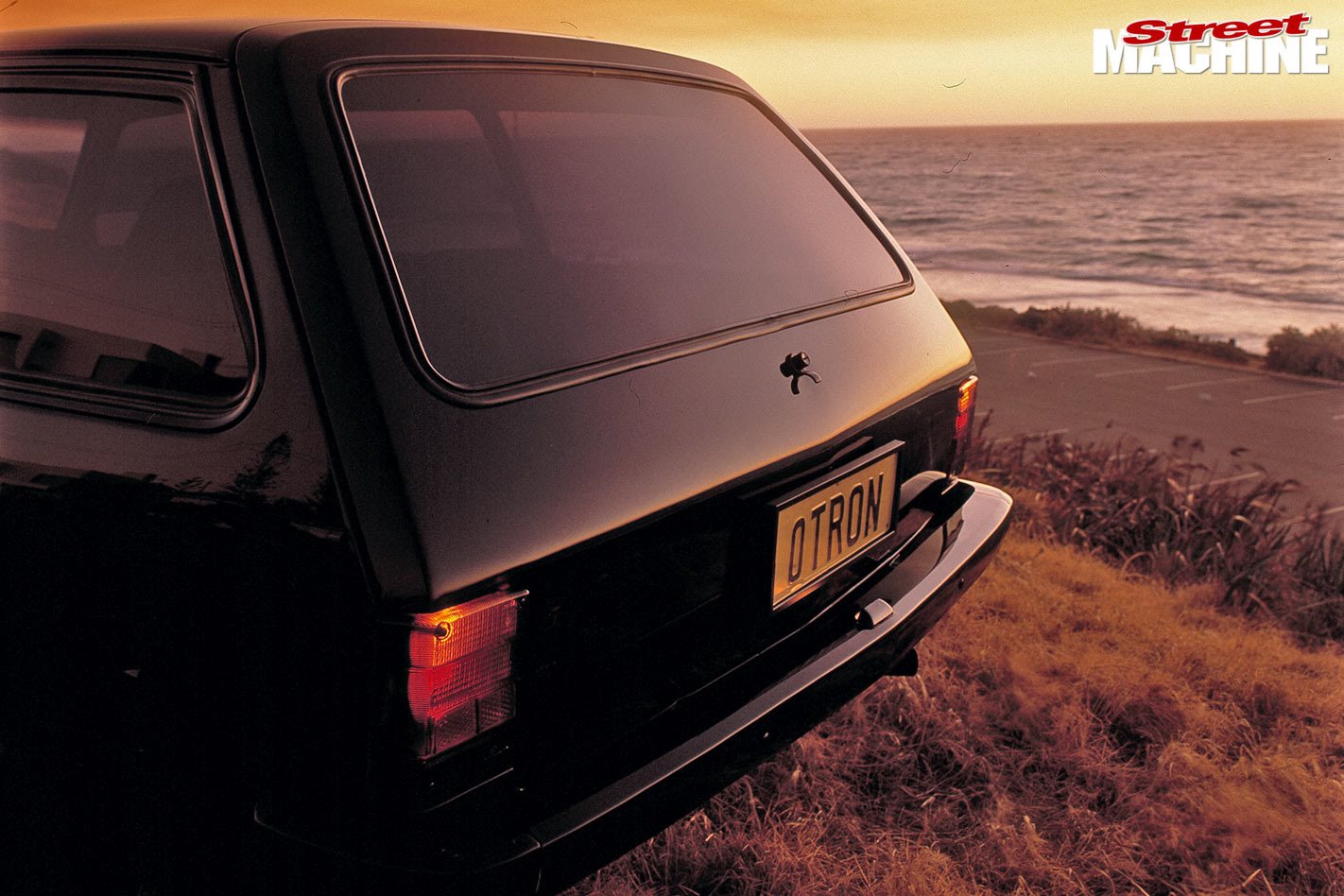 If you sit in the driver’s seat, the electronics almost strangle you. Sean’s installed electric windows and, more impressively, electric doors, which are operated by a remote panel in the console. The headlights come on automatically when it gets dark and the wipers go on when it gets wet. There’s a 29-function cruise-control computer that monitors everything from cruise speed to fuel consumption. There are also 23 points on the car – from under the bonnet to the rear brake lights – that are constantly monitored for (as Otron says) ‘mal-fun-ction’· or ‘fail-i-or’. And when the alarm’s activated, the windows automatically close, the doors lock and Otron ‘arms’ itself. Otron then pages Sean, telling him that his diodes are being infiltrated. 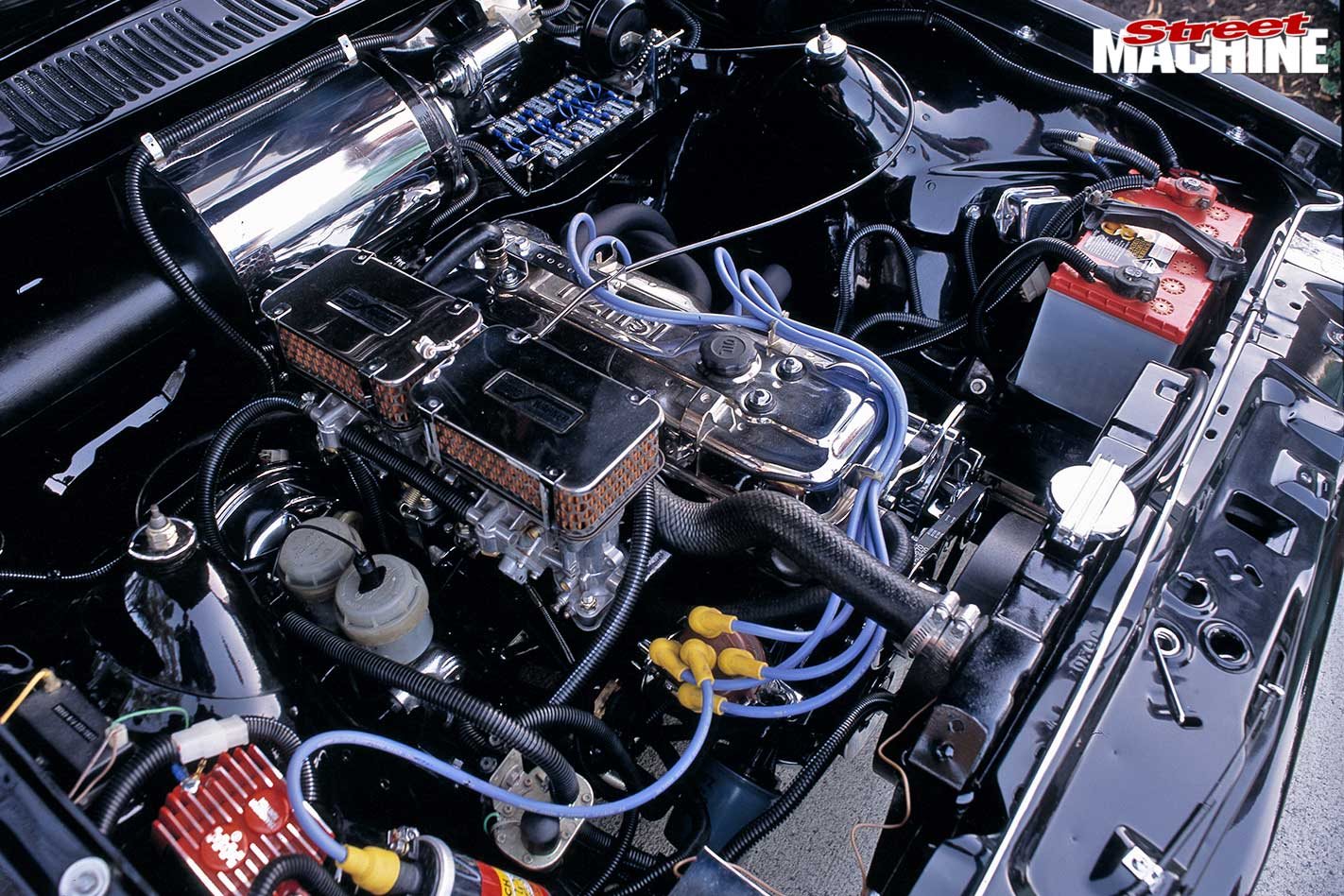 In fact, the rest of the Gemini is almost boring compared to its electronic wizardry. The four-pot 1600cc lsuzu mill has been bored oversize and fitted with high-compression pistons, a strengthened crank and a billet cam. The alloy crossflow head was polished, ported and flowbench-tested for maximum horsepower, while Sean has opted to top the lot with twin 40 IDF Webers. Other bolt-on bits include tuned extractors, a sports exhaust, a heavy-duty electric fuel pump, an electronic spark booster, a hi-volt coil, a thermatic fan, braided lines as well as a bottle of laughing gas.

Read next: How to install a digital dash into a classic car

With the Gemini’s driveline kept as standard, everything that could’ve been chromed, cleaned or strengthened has been. 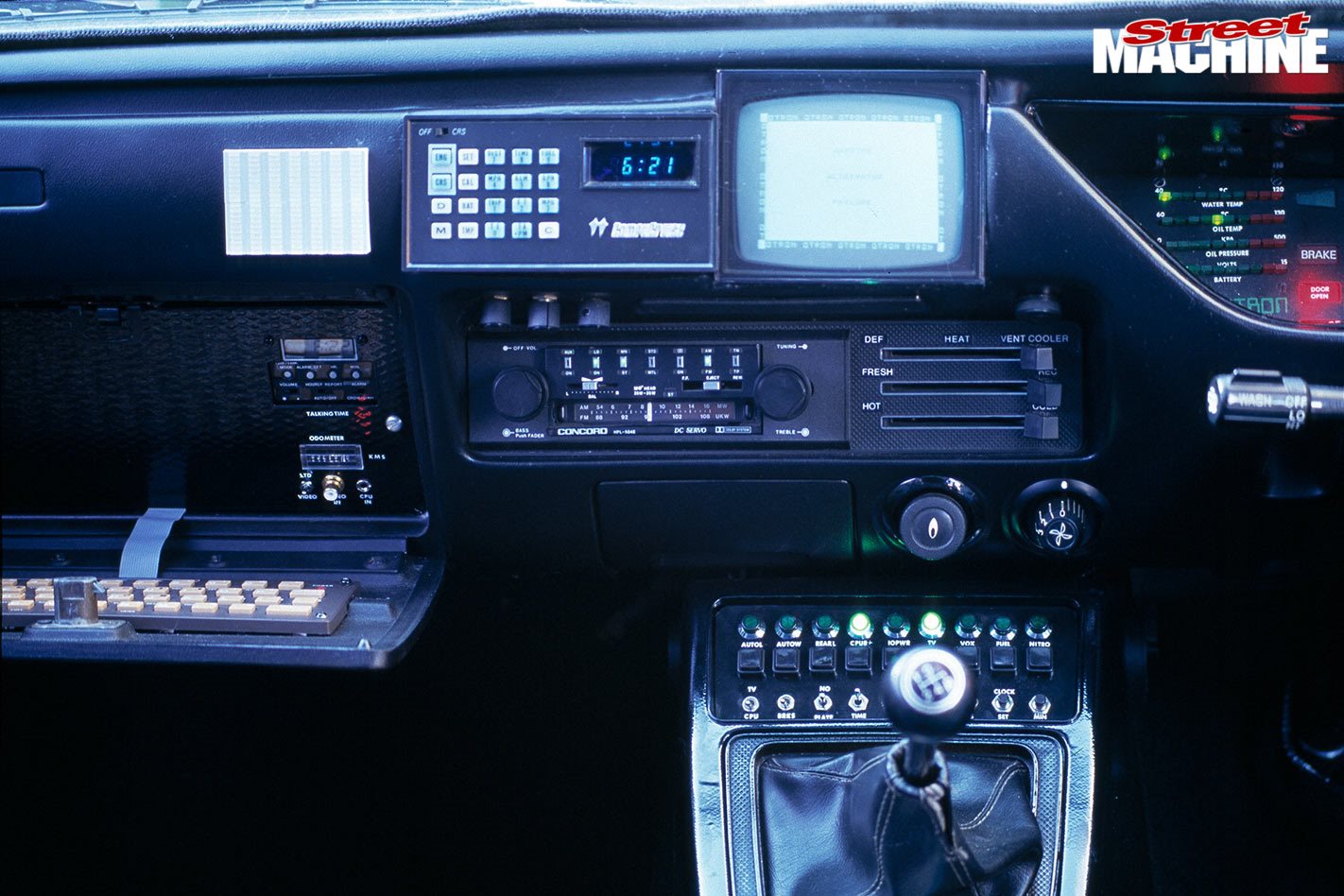 Underneath, it’s the same story. Just about the entire Gemini suspension and braking systems have been left stock, but overhauled or chromed. The only mods Sean has made included setting the Gem an inch closer to the tarmac and fitting Monroe Wylie gas shocks and Lovells springs. Tyres are 14x7 low-profile Falkens while the wheels are same-size Dragways.

Otron also looks a pretty healthy specimen, having had all its badges removed, a set of fibreglass flares and skirts bolted on and a few layers of two-pack Glasurit BMW Diamond Black covering its flanks. 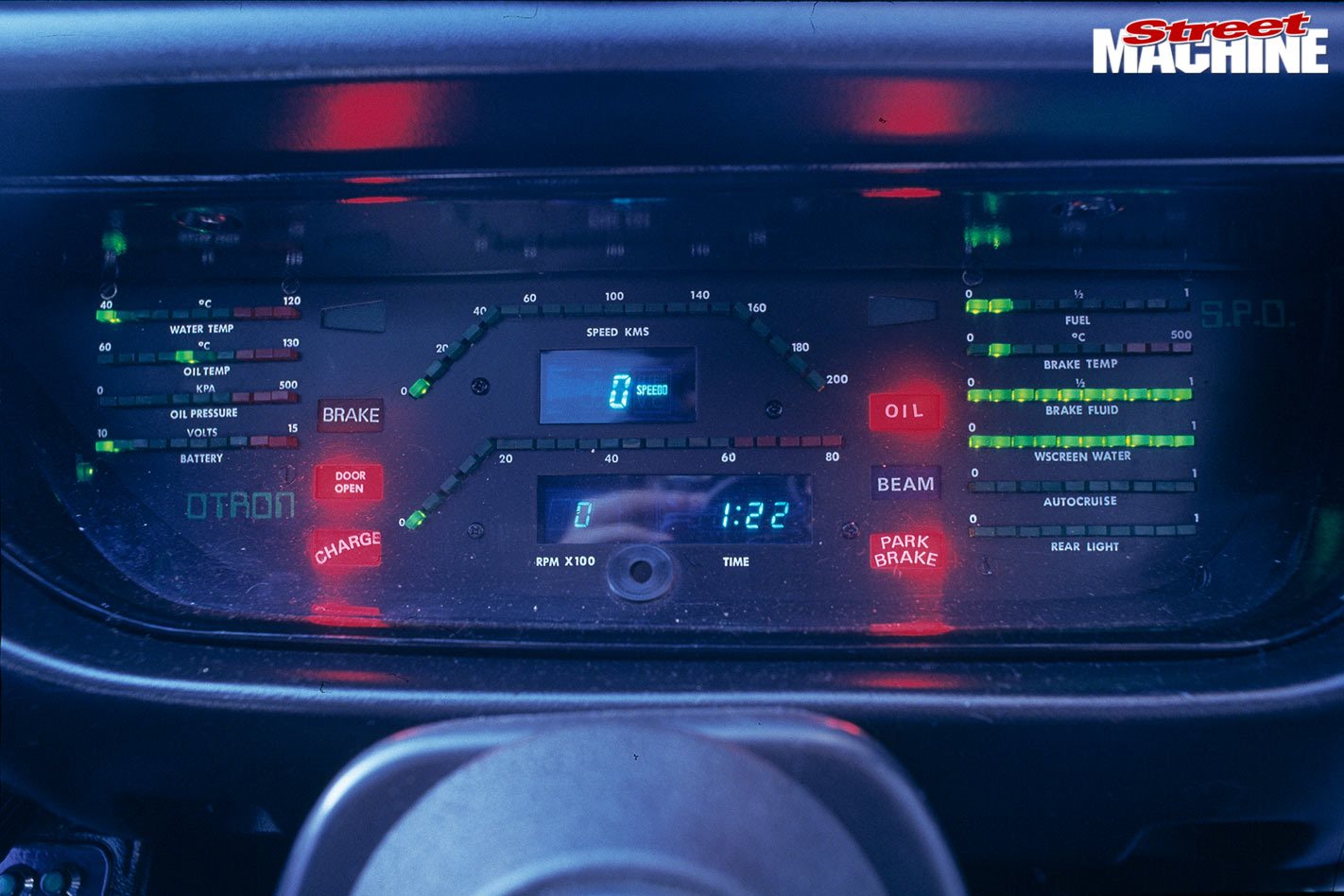 Inside, after copping an eyeful of the gizmo-packed dash, the blue crushed velour headlining and the re-trimmed doors and van walls do no harm to the optics either.

As you’d expect with everything else being so technologically astounding, Sean went for a top-quality Concord stereo, amp and speaker package. But tailgaters had better take note – Sean has also hooked up a 100-watt spotlight to sit behind the rear number plate.

All up, Sean reckons it’s cost him around $40,000 to get Otron together, but that doesn’t account for his time and effort. After all, how many guys can boast they own a talking car?