We take an in-depth look at the history of Holden's Aussie-built V8 and the many changes it went through over 30 years. WhichCar is the home of Street Machine magazine.

Once disparaged as the 'plastic' motor, the Holden V8 has proven its worth on both the street and track

WITH 12 Bathurst victories, hundreds of Street Machine feature cars and more than 541,000 cars down the production line, the Aussie-designed Holden V8 holds a special place in the history of our sport. The engine’s production life began with the HT in 1969, and ended in sedans when the alloy LS1 was introduced with the VT-II Commodore in 1999. In the utes the Holden V8 survived a little longer; until 2000 when the VU ute hit the showrooms.

The LS1 and its variants have proved very popular in all facets of street machining, but we’re here to tell you that there is life in the venerable Holden V8 yet. There are thousands of Holden-powered cars in drag racing, burnout and circuit competition, and countless more doing duty as street cars.

One advantage of the motor is that it was the subject of much development. Sticking with the Holden V8 in cars that had them as optional equipment saves the trouble of engine conversions, and many people reckon they just sound better than an LS-based engine.

In this special feature, we’ll examine how we came to have a unique, Aussie-designed V8 in the first place, and Bob Kotmel will give us the skinny on his favourite street-level combination, and we’ll look at some of the toughest Holden-based street machines and racers that are still out there flying the flag for the engine once derided as the ‘plastic’ V8.

PART ONE - IN THE BEGINNING

In January 1965 GMH’s engineering division initiated a forward engine program review. Ford and Chrysler had both released V8 variants of their Falcon and Valiant in the US for 1964 and it looked likely that they would follow suit in Australia. GMH concluded a new V8 for mid-1969 was a must! 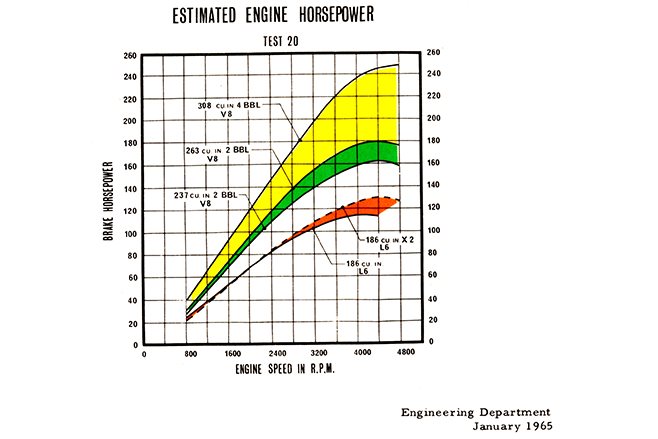 GMH forecast that by 1970 35 per cent of Holdens sold would be V8s, rising to 50 per cent by 1975, which gave Holden engineers Fred James and Ed Silins plenty of justification to come up with their own design.

Silins was born in Latvia, graduating in 1940 with a doctorate. His thesis on the V1 rocket program earned him a role in the Luftwaffe as a pilot. In 1949 he immigrated to Australia as a displaced person, and joined GMH as a draftsman in 1951. Once his expertise was known, he was made an engine project engineer.

Ed Silins’s boss was Fred James, a one-time boy racer from WA who served time at Vauxhall before joining GMH and becoming part of the Holden car project. James later became firm friends with Harry Firth and was the chief proponent for developing the XU-1 engine.

Silins investigated the Chevrolet 283ci, Olds 330ci and Buick 300ci V8s in 1964 and believed he could take the best practice from each and build a lighter engine.

Silins had always planned to use an alloy inlet manifold and front engine cover, and one of his first tasks was to get Bob Chamberlain of Rolloy Pistons on board, to assist with design and make the experimental alloy castings. US engines were also flown in to study current practice, and by November 1965 castings from Saginaw and machining by Chevrolet was organised. 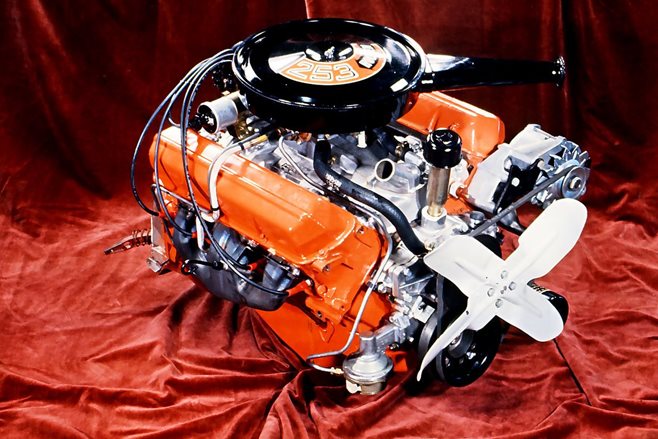 The 253 was meant to debut in the HK, but delays meant it wasn’t introduced until midway through the run of the HT. Note the oil filler on the timing gear case – this was relocated to the rocker cover from the HQ onwards. There were two versions of the motor available, a low compression (8.0:1) and high compression (9.0:1). The carburettor was a WW2 Stromberg. Its big brother, the 308, was essentially a bored-out 253 with a four-barrel Quadrajet carb

It was six months before machined parts arrived and it was not until October 1966 that the first engine was fired up. Four days later, it failed after swarf caused an oil pump seizure. Silins used an HR for testing, but it was later replaced with an XT Falcon. The HR was first driven on 5 June 1967.

Holden tried to get the 253 into the HK but as 1968 dawned it was obvious that the Holden V8 would not be ready. An added problem was that sales director John Bagshaw made a deal with David McKay to run the new Monaros in the London to Sydney marathon. Engineering was told to make the Chevrolet 307/327 small-block fit the HK instead. 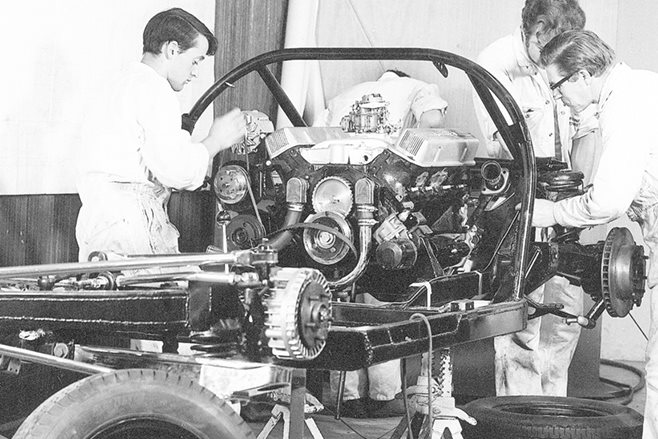 The first public appearance of the 253 was in the Holden Hurricane concept car. It was a hot version of the mighty thong-slapper too, with 10.1:1 compression, a big cam and solid lifters, making a claimed 240hp. That was all the excitement the 253 ever got though; it remained an economy model for the rest of its life

James and Silins were fortunate that the V8 transfer line had already been ordered and it was too late to change, so in 1969 the first Holden V8s finally emerged, powering the new HT. Over the next 30 years, more than 541,000 V8s ran down the transfer line at Fishermens Bend until 28 June 1999, when it was replaced with the LS1. 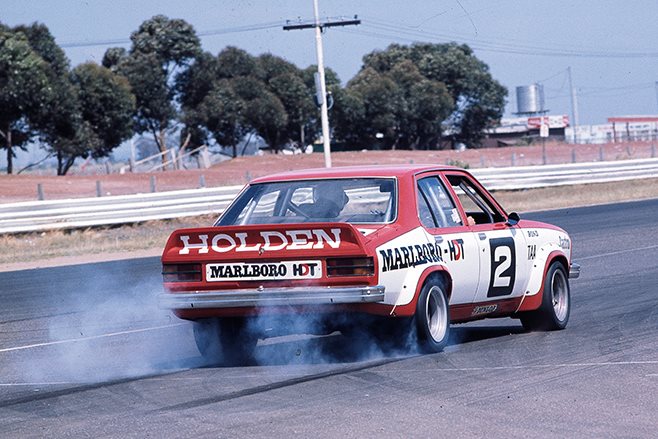 The L34 was an option package for the LH SL/R 5000, designed to homologate the car for racing. The engine development was done by the Repco Engine Development Company (REDCO). Holden claimed the L34 modifications were for reliability only, making no more than the standard 240hp, but in reality, it made much more

The first V8s were known as the red series and remained relatively unchanged until the 308 L34-option engine was released on the LH SL/R Torana in July 1974. The L34 was a Repco-developed 308 with 9.8:1 compression ratio, free-flow exhaust, modified heads and twin-point distributor. A high-performance kit was also available through dealers. 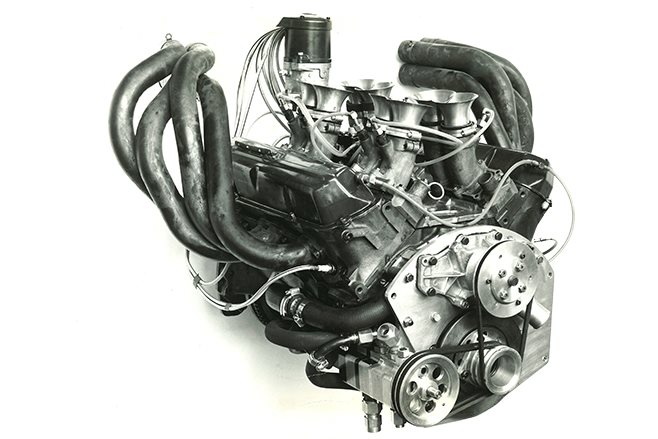 Repco turned the Holden V8 into a Formula 5000 warrior, sourcing strengthened blocks straight from the factory, modified to accept four-bolt mains. Special steel cranks, lightweight pistons, Wade cam, dry sump, heavily re-worked head, Repco/Lucas fuel injection and much more added up to a 495hp monster that could rev at over 8000rpm. Some of this development work spun off into the SL/R 5000 Torana’s L34 performance pack in 1974, which included stronger rods, improved crank, light flywheel, baffled sump, roller rockers and new headers. In race form, with a cam and carb change on top, L34s were said to be good for 350hp or so

In 1972 Repco had also developed a Formula 5000 engine using Holden 308 castings. With the release of the HJ, engines were designated 4.2- and 5.0-litre, and 5.0-litre auto blocks were drilled for the Turbo-Hydramatic.

- In part two of our History of the Holden V8 feature, we look at the blue series motor of 1980, right up to the last Aussie-built Holden V8 of the VT Commodore and VSIII ute.