In March 1980 the colour changed from red to blue to mark the introduction of the XT5 high-performance upgrade. The 308 XT5 was mainly fitted to the VC HDT Brock Commodores. In September 1981, in VH Commodores, an optional V5H 308 was released with 177kW@4700rpm and 418Nm@3500rpm; this was a significant achievement as this rear-wheel number now equalled the flywheel power of the original 308. A year later performance was improved on the V5H for the HDT SS Group 3. Revised heads, new inlet manifold and exhaust were some of the changes.

Coded LV2 or A9L, they were used on the VK Group A SS. This series was painted black.

During the life of the VL series, HSV released a Group A EFI version of the LV2 engine. From the VN series, Holden changed the engine designation to 5000 V8. Blocks were now drilled for the Chev bolt pattern. The V8 engine was now coded LB9 and all versions of the 5000 V8 used the GM Delco MPI EFI induction system. In May 1994 the L98 option stroked the 5000 V8 to provide 5.7L for HSV. The last changes were in August 1997 in the VT, when a hydraulic roller cam and sequential injection were introduced.

The Group A era saw the Holden V8 de-stroked to 304ci to meet homologation. The hot version was dubbed the A9L, developed by Holden’s Ray Borrett with help from Brock and Perkins. Group A was not initially kind to the VK, but the privateer team of Allan Grice and Graeme Bailey broke through to win Bathurst in 1986.

2. The Plastic Pig - VL Group A
Holden’s post-Brock solution was the HSV Group A. The 304ci motor used the crank and rods from the previous A9L motor with new pistons and detail changes to the valvetrain. 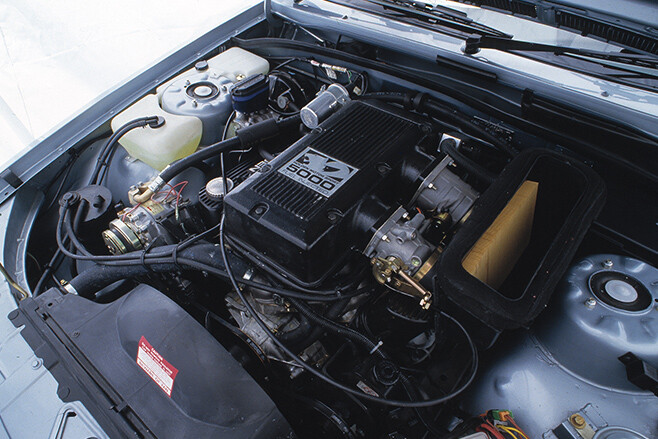 The big-ticket items were brand-new heads, a new cam, and the fuel inejction set-up, including the famous twin-throttlebody intake manifold.

3. Engine Development
Although it is dubbed the Walkinshaw, the majority of the development of the VL Group A was done in-house. Holden engineer Warwick Bryce and his team experimented with a variety of different configurations for the induction system, including this set-up with twin plenum chambers onto of a set of vertical ram tubes.

4. Commodore VN Group A
The VN Group A was the final car built for homologation purposes. The engine alone received a host of upgrades, including beefier conrods, a hotter cam, a bump in compression to 9.0:1, a new four-into-two-into-one exhaust and a new inlet manifold, which retained the VL’s twin throttlebodies, but was lighter and internally smoother.

5. Last man standing
By 1993, most Commodore teams had switched to Chevrolet V8 power, but with years of development work up his sleeve, Larry Perkins stuck with the Holden V8 in his VP Commodore. Perkins took pole at Bathurst that year and he and co-driver Gregg Hansford won the race, after an epic battle with the Gibson Motorsport pair of Jim Richards and Mark Skaife. Perkins had Holden homologate a new head and stiffer block, allowing him to make full use of his slide throttle manifold.

6. Arms Race
While many predicted that the advent of unleaded petrol and EFI would mark the end of street machining as we knew it, we now know that the opposite is true. By the end of the 90s, there was a raft of heavy-hitting hardware for the Holden V8 on the market, including twin throttlebodies from the likes of COME and MoTeC.

7. 24-valve Holden V8?
A Holden V8 with three valves per cylinder and single overhead cams on each bank? It was a reality, built by Holden engineers Leigh Maguire and Mick Webb as an experiment to show that the V8 could be given a high-tech makeover to appeal to overseas export markets. It was cobbled together using everything from Camira valve stems to BMW hydraulic lifters and roller rockers. The overhead cams were driven by timing chains that took their drive from the a sprocket mounted on the original camshaft. The Maywebb engine (an amalgam of its creators’ names) was fitted to a Calais mule and by all reports did everything that was asked of it, but political realities within GM saw it quietly shelved.

8. V8 past '98
With the release of the VK Commodore in 1984 came the bombshell that the V8 was going to be dropped from the line-up, with the imminent dawning of unleaded petrol given as the reason. This prompted the V8 ’Til ’98 campaign dreamed up by SM editor Geoff Paradise. This in part led to the decision being reversed, giving birth to the unleaded-compliant 304ci motor – and work began on planning for an EFI version of the Holden V8. Holden engineer Warwick Bryce led the charge. The now-familiar injected 5.0-litre that debuted in the VN missed out on the Group A’s four-bolt mains, roller rockers and induction set-up, but actually made more mid-range torque.

9. Bye, old mate - last Aussie-built Holden V8
The VT Commodore and VSIII ute were the last hurrah for the Aussie-built Holden V8. The final tweaks included sequential injection (now using a MAP sensor and knock sensor, the latter of which was previously only used on HSV mills), lighter pistons, a new steel cam with roller lifters, a new throttlebody, a new intake system and twin-cat exhaust. The LS1-powered VU was introduced in December 2000.