EVER since he was an impressionable youngster, ACT inhabitant Joe Tyler has had a passion for EH Holdens – he owns seven of them! This Special wagon was a local car and in pretty tidy nick when he picked it up around five years ago. “It was in pieces, in boxes,” says Joe. “But all original, with only a small amount of rust.”

The build started out as a resto with a few upgrades. However, a few Friday nights in the shed, combined with a few beers or 10, saw those plans start to go sideways, in true street machine tradition: “It got out of hand, and we cut it up!” Joe laughs.

One of Joe’s buddies planted the idea of giving the EH wickedly low ride height and making it a burnout car; no surprise really, given said mate was burnout champion Adrian Cuthbertson – Mr SKIDMA himself! “I thought: ‘Screw it, I’ve got five others I can keep original; let’s build this one into something we can go and have fun in,’” Joe recalls. “Adrian was key in helping me plan out the car. He also pitched in with chassis fabrication and sheet-metal work.”

The EH’s low, low ride height is thanks to a full custom chassis. The lads started with a McDonald Brothers bolt-on front clip with rack-and-pinion steering. From there, two beefy rails extend rearwards and tie into a custom coil-over/ four-link rear. All this plus a raised tunnel, tubs and all-new front inner guards allow the EH’s low-profile 18-inch rubber to tuck right up inside the guards – sweet!

“I’ve driven a fair few EHs” says Joe, “but none of them like this one. Capital Steering & Suspension spent a couple of days setting it all up – it steers and stops really well.”

While it’s not necessary to have tons of power to have a good time on the pad, having bulk horsepower certainly dials the fun factor up to 11! In keeping with Joe’s ‘let’s have fun’ build philosophy, Damo from BG Engines was called upon to piece together a stout mill for the EH. “Damo does Adrian’s engines,” Joe says. “I’ve never seen his car go better – he knows burnout engines.”

Based around LS3 architecture, the 413-cuber is filled with the best of the best, all topped with a BDS 6/71 pump and Enderle Bird Catcher mechanical injection. Damo was cautious with the boost and tune to help the engine survive brutal pad sessions. Nonetheless, the combo’s good for an effortless 850 horses at the crank.

“Like the rest of the car, the engine budget blew way out, especially with the dry sump,” says Joe. “It’s all the hours – they really add up. In the end, I made a heap of brackets and things myself to help rein in costs.”

The healthy mill exhales through custom two-inch primaries by Geoff at G-Rod Customs, with four-inch collectors dumping into a 3.5-inch system.

After you tear your gaze away from the methanol-guzzling Bird Catcher hat and BDS huffer, note the owner-formed down bars, sheet-metal inner guards, dry-sump tank (driver’s side) and puke tank (passenger’s side)

To withstand the power and anticipated torture, Al’s Race Glides supplied one of its bulletproof TH400s, while Mick at M&A Engineering put together a sheet-metal nine-inch filled with 3.1:1 gears, 31-spline centre and billet axles.

Burnouts are not only hard on drivelines; they’re also hard on panel work. To keep those shredded tyres from tearing everything up, Joe and Adrian planned ahead. “I wanted to keep the back seat, but the tubs and everything from there right through to the beaver panel have been plated with thick sheet metal,” Joe says.

As proprietor of Joe’s Body Works, Joe did all of the panel and paint and a lot of the fabrication work himself, which is why MATURED looks so nice for a burnout car. “I spent more than a solid week just in the engine bay,” he says. “I made the down bars and did the sheeting myself. Mounting the dry sump and puke tanks took ages; we wanted them further back, but had to keep moving them forward until they cleared the tyres at full lock.”

The smoothed firewall is sans wiper motor and brake assembly – the latter is a right-angle unit tucked up under the dash.

Inside, the goal was to keep things looking as stock as possible. A couple of notable departures include the B&M shifter, MoTeC digital dash (mounted in the stock gauge binnacle) and raised rear floor to clear the 58-litre fuel cell. Joe used the trim code off the compliance plate to order repro door trims from Winner Products in the original colour. For the rest of the interior, Shaun at Trims By Shaun worked his magic. This included bolstering the front bench seat to provide additional lateral support for flinging the wagon ’round the burnout pad.

Not wanting gauges everywhere, Joe opted for a MoTeC dash. Besides, he reckons that if he blows the thing up, the MoTeC’s datalogging capability will tell him what went wrong

As the build neared completion, Adrian reached out to the Summernats crew about potentially getting it unveiled – they said yep! “I felt lot of things were not up to scratch for that kind of attention,” Joe admits. “I was worried I’d have to redo a lot of things – I was building a skid car, not a show car.”

Joe knows his stuff, as his ’28 roadster went Top 60 at Summernats 29 and picked up Top Open Hot Rod. But in his own words, MATURED still turned out pretty flash, and judging by the applause the wagon received at its ’Nats 32 unveiling, plenty of other people agreed.

“Having my mates around, hanging out, helping and sharing a quiet beer, all while offering plenty of ideas, was a lot of fun,” says Joe. “Sure, the build had its problems, but doing most of it myself, there really was no one else to blame.”

MATURED has already proven itself on the pad, with an impressive maiden burnout at Bathurst Autofest – complete with huge fireball! Don’t fret, all is good – only minor damage. But tyres everywhere should be nervous, as this EH has a long, illustrious, rubber-shredding future ahead of it.

So what about those MATURED plates, anyway? “It started out as a bit of a joke, and stuck,” Joe says, mysteriously.

Oil is the lifeblood of every engine – or more accurately, maintaining oil pressure is. Low or no oil pressure (oil starvation) will usually lunch any mill in a matter of seconds. Things like bulk revs and high g-forces can expose the oil pick-up in a normal sump. This leaves it sucking nothing but air – which is a lousy lubricant.

Too nice to skid, eh? Joe gave the EH a nudge on Skid Row during Summernats 32 and then set it on fire during its maiden burnout at Bathurst Autofest. “I was a bit worried when saw all the black,” he says. “But it all polished off; hardly left a mark.” 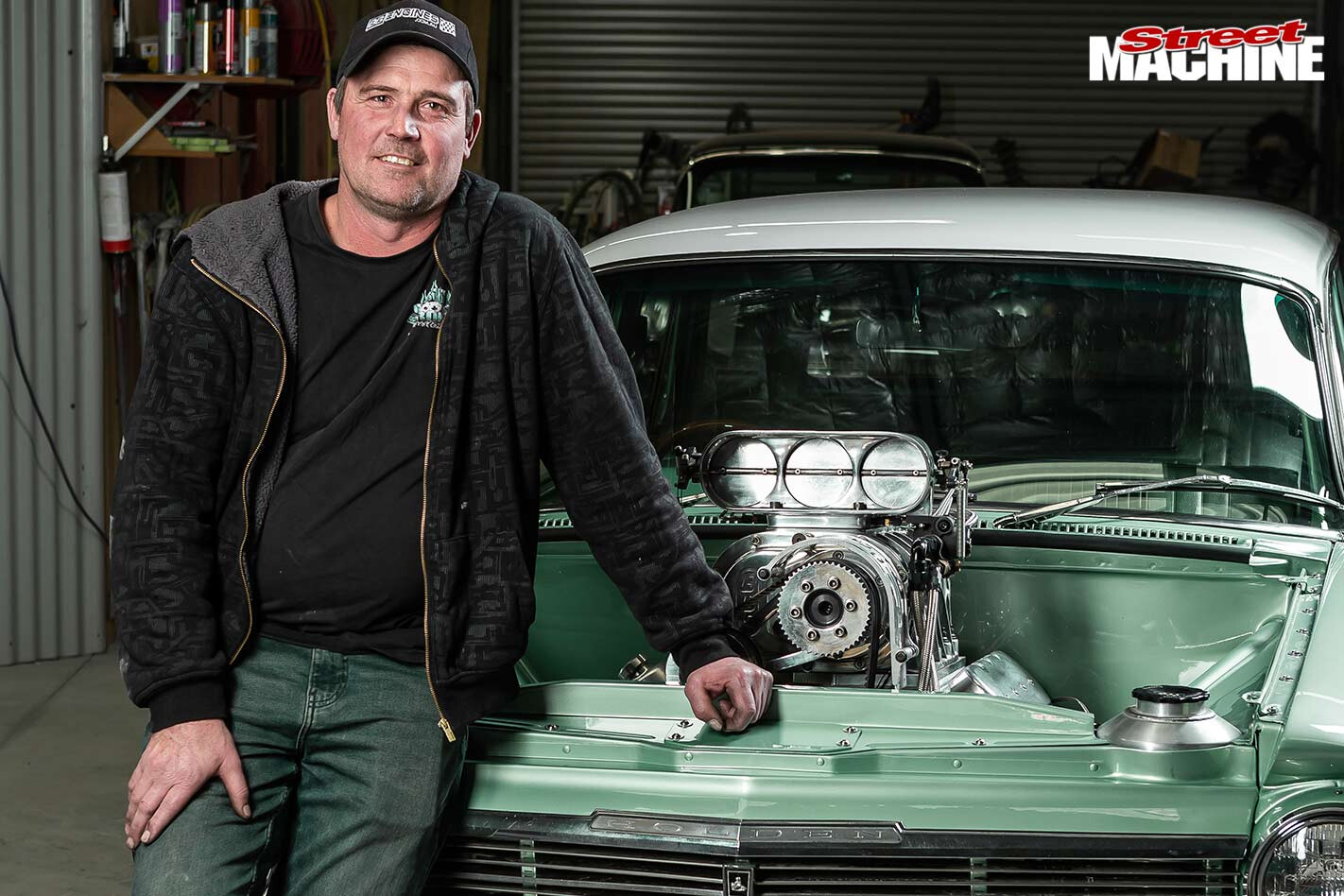 THANKS
Adrian Cuthbertson (Pist’n Broke Customs); Damo (BG Engines); Al (Al’s Race Glides), Mick (M&A Engineering); Shaun (Trims By Shaun); Winner Products; G-Rod Customs; Brad (Luff Motors Yass); Dave White (auto electrics); my mate and neighbour Darren for all the nights problem-solving while having a quiet beer; my family for all their support and for all the time and money spent on the project