HQ Holdens are tough...and a clash with a concrete wall only made Tom Keves's Statesman tougher

SOMETIMES it takes a major event to motivate you. For some reason you need a good kick in the arse to finish a job. For South Aussie Tom Keves it was more of a kick in the chest — an unexpected meeting with the concrete wall at Adelaide International Raceway while competing in the Superskids at the 2009 Gazzanats. 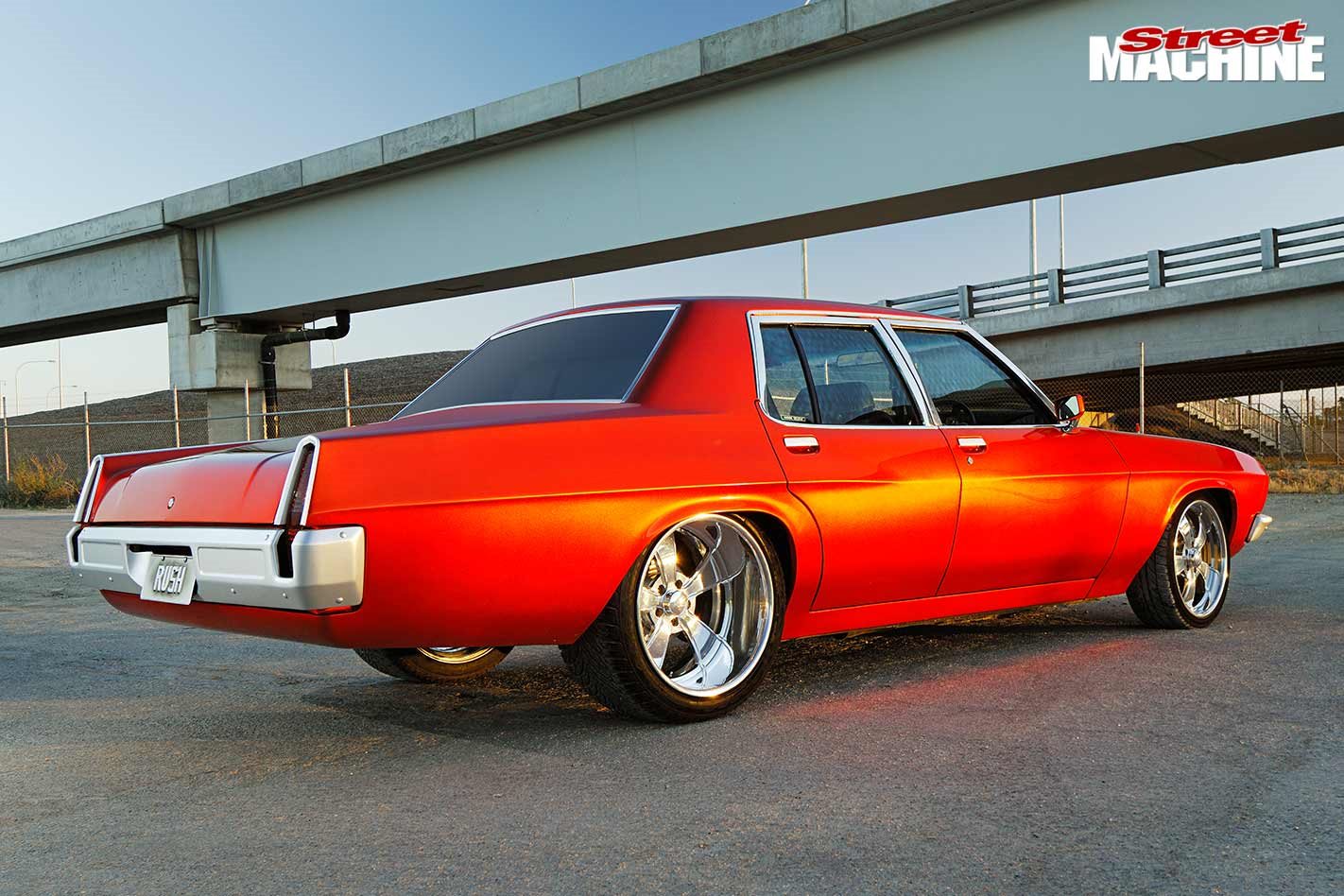 Tom’s flamed matt-black HQ Statesman left the start line hard, with the blown LS1 at full noise and smoke billowing off the rear hides in a powerskid. It held a nice tail-out drift for about 150 metres before it hooked hard right and smacked the wall head on. The Statesman’s nose looked like it had gone 10 rounds with Danny Green and the chassis rails were bent. You can find footage of the coming together on YouTube if you care to look at the carnage. 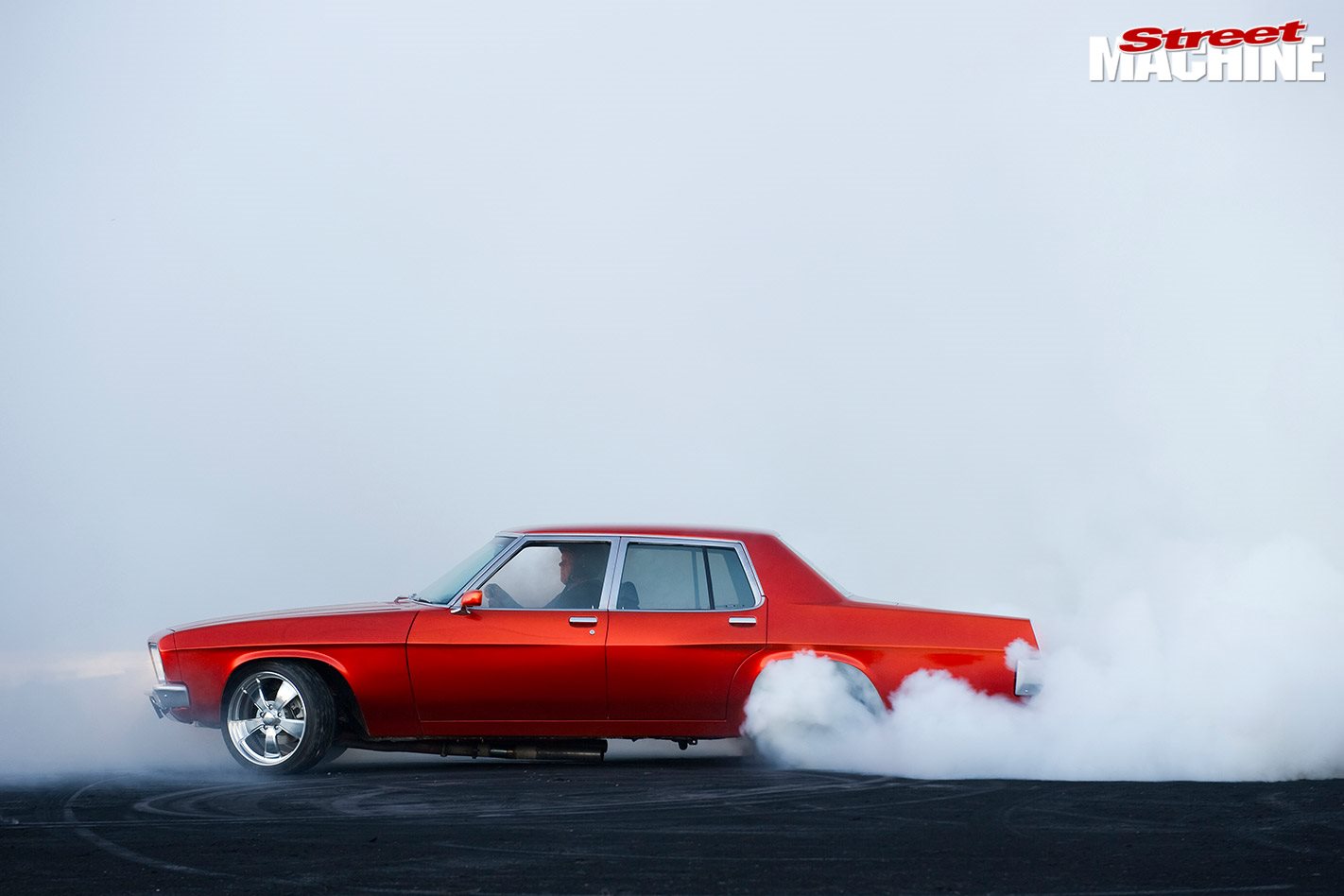 He means that literally and figuratively: “I had a business to run and I didn’t want to think about the car after that.”

It was here that Tom’s wife, Karen, took over. Within 48 hours of the crash, the Statesman was at Extreme Restorations, where Chad Auckland and Karen were hatching a plan. With just nine weeks to get the car repaired and ready for the Street Machine Summernats, they had their work cut out for them.

“Chad went beyond expectations with the build,” Tom says. “He and Karen designed the car, the colour, the wheels and the ghost flames. The colour was such an important part of the car — it had to have the wow factor.” 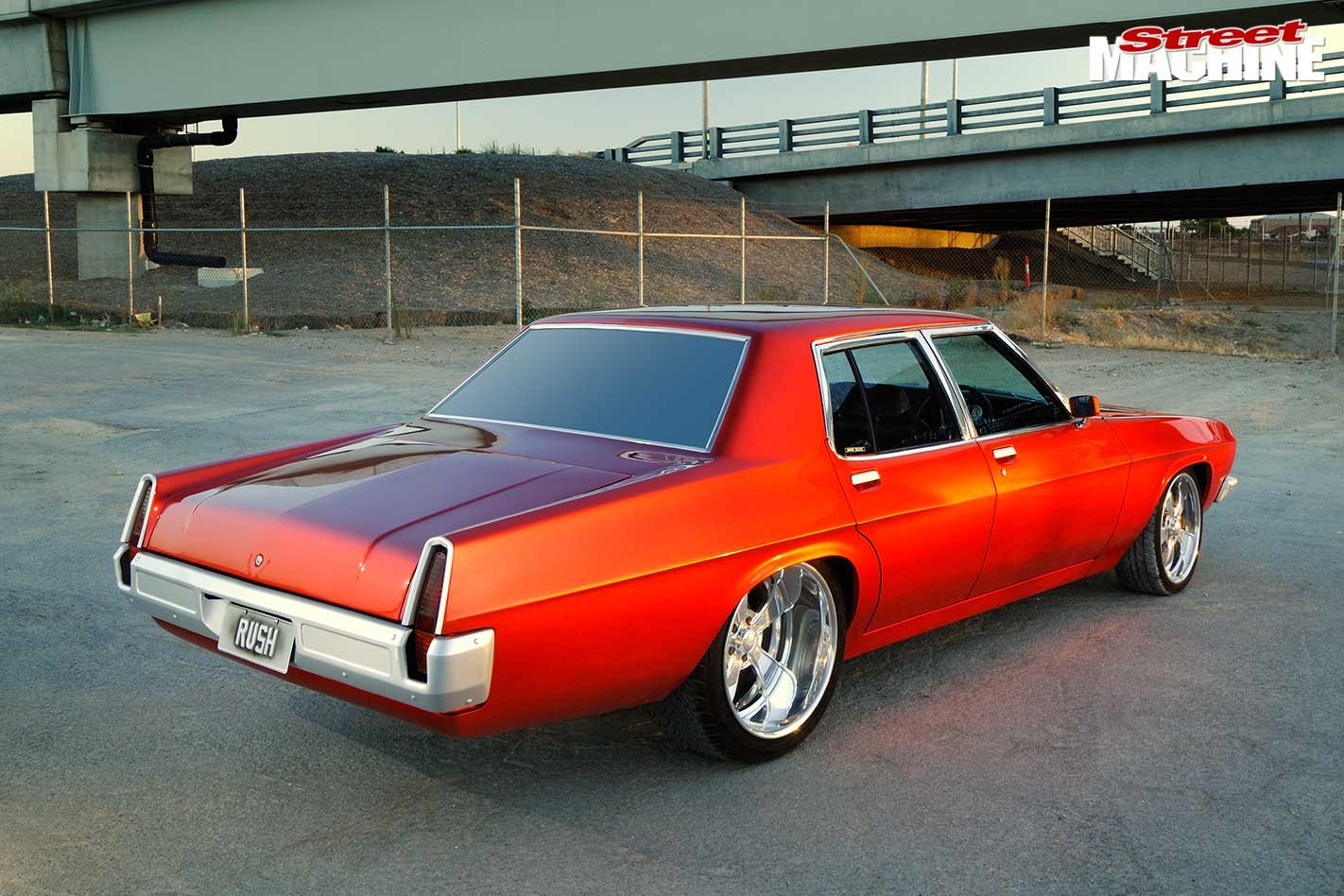 Tom and Karen also took advice from House Of Kolor’s Owen Webb when choosing the HOK Tangerine paint. The photos don’t really give the full effect of the low-key flames that run down the bonnet and sides.

The paint was laid over panels that Chad had stripped to bare metal and massaged back into those classic HQ lines. The front guards, bonnet, doors, grille and bumper all had to be replaced and, while it was in pieces, Chad rectified any other damage he could find from the car’s 35 years on the road. 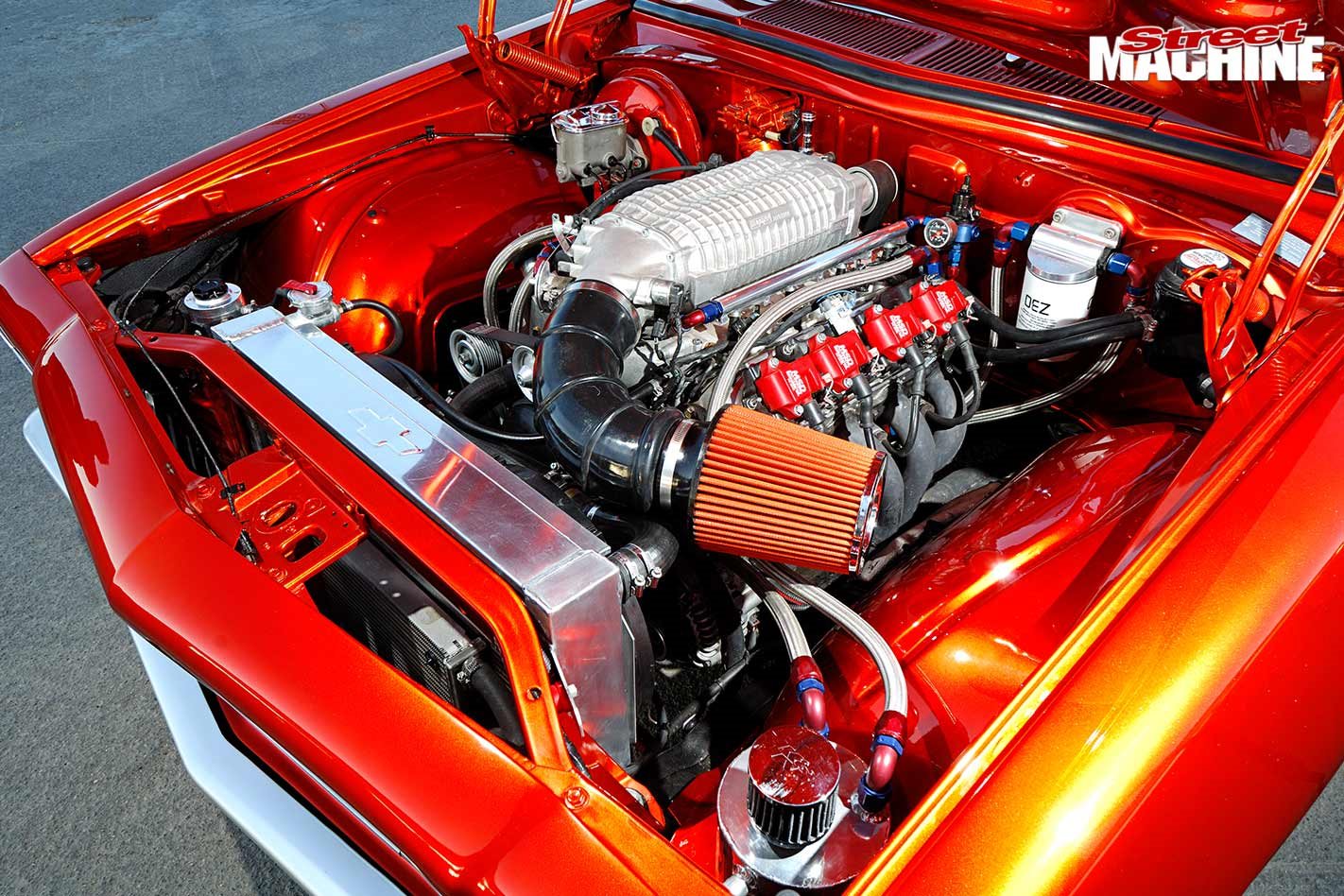 The result is die-straight metal under about 14 coats of HOK’s best product. Deeper under the skin, Chad tubbed the rear wheel wells to make space for the planned wheel and tyre upgrade.

The wheels — chosen by Karen — are Intro V-Rods measuring 20x12 on the rear and 19x8 up front. Both ends are clad in 35-series ATR Sports liquorice straps, 235 wide on the steers and massive 315s on the rears.

The rear V-Rods are located in the tubbed wells on a shortened nine-inch with a Strange spool and 35-spline Moser axles. The rear axle swings on a triangulated four-link suspension set-up from Melbourne’s McDonald Brothers Racing that’s suspended on QA1 adjustable coil-over shocks. 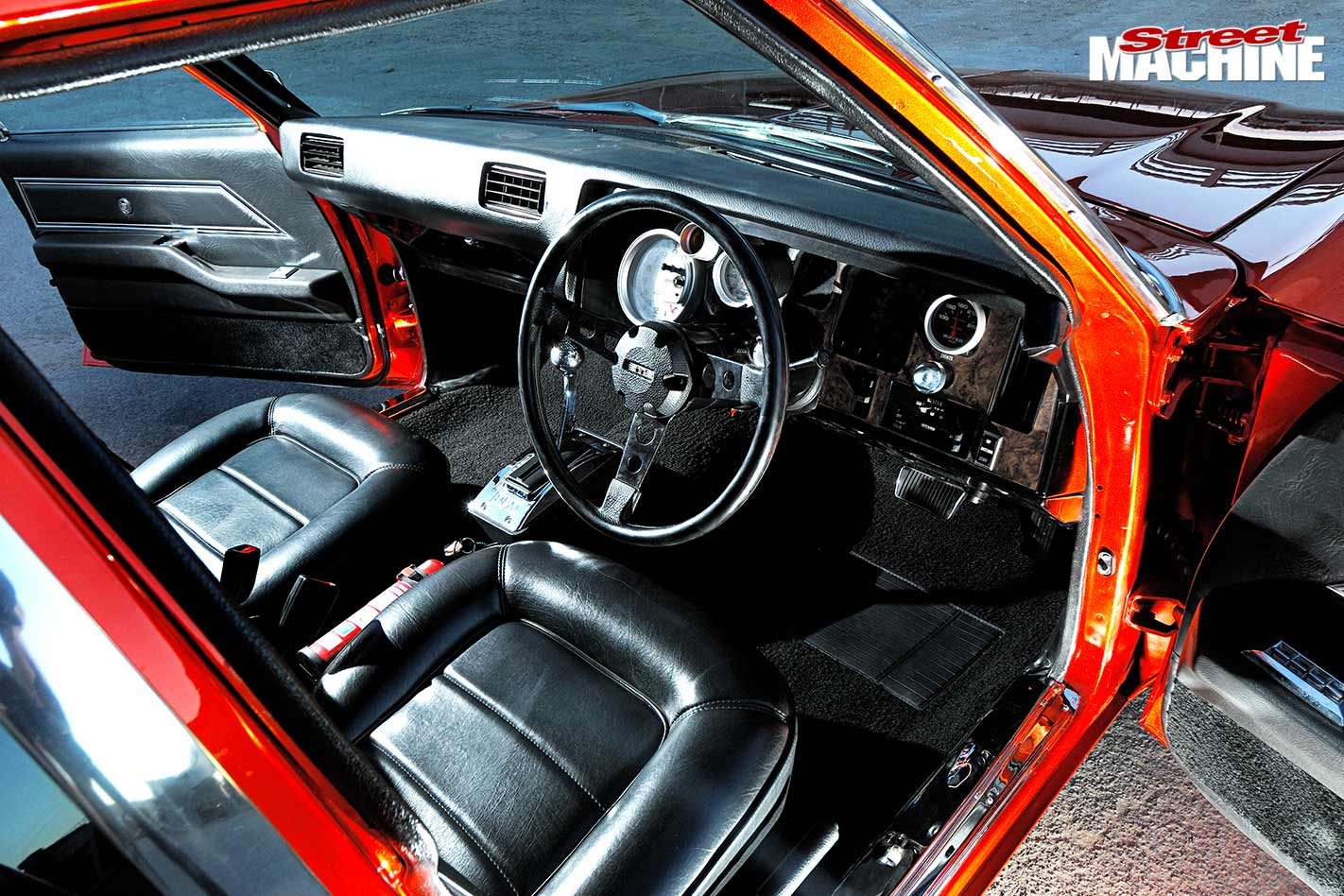 The blown LS1 engine didn’t escape the concrete head-butt unscathed, so the stout mill was rebuilt prior to being slotted back into the Stato. The engine spec is similar to how it was previously, centred on an LS1 that’s been stroked and poked to displace 393 cubes. The capacity comes thanks to an Eagle steel crank with a 4.100-inch stroke and Arias 10.3:1 pistons in 3.900in bores. Pumping extra atmosphere into the pots at 8psi is a Harrop/Eaton 2300 supercharger atop a water-to-air intercooler and a Harrop manifold.

Premium fuel arrives from a cell in the boot via a MagnaFlow electric pump and 60lb injectors. It mixes with the compressed air charge in CNC-machined combustion chambers in the LS1 heads. A custom-ground Crane camshaft sorts out the opening and closing of the stainless-steel valves and the gases exit via 2.5in headers and a three-inch system with high-flow cats, all from DiFilippo Exhaust. The engine was built by Pro Fix in Marion.

Annoyingly, after it was reassembled and put back in the car, a hairline crack was discovered in the block around the rear main, so it had to be yanked again and rebuilt with a fresh block. 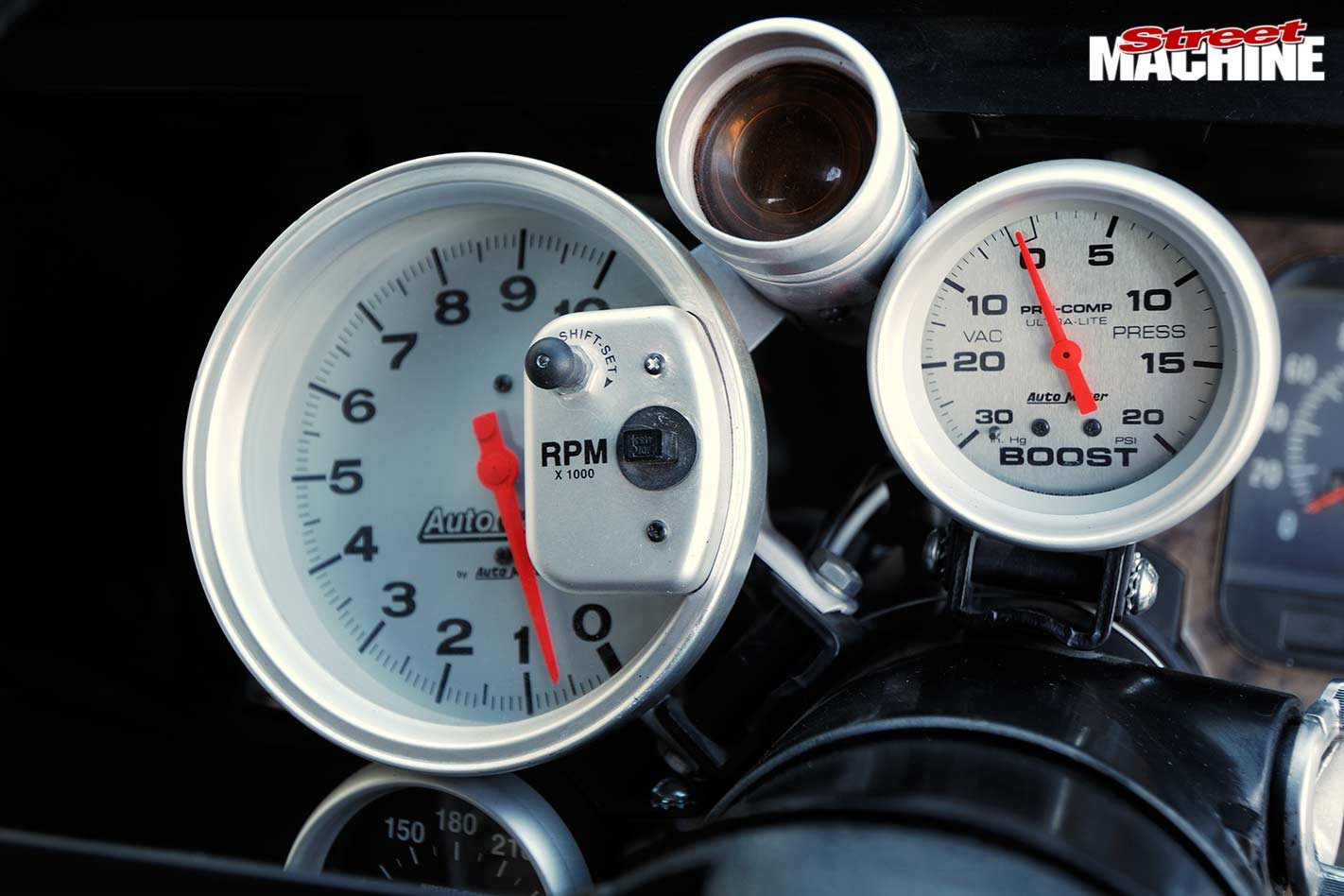 The Statesman’s cosmetic surgery was completed with no time to spare to make the Summernats for its unveiling. Since then it has appeared at the Murray Bridge Autofest, where it placed in the Top 10 and won Best Engineered, Best Custom Paint, Best Sedan and Best Post ’48. It was a similar story at the Corowa Autofest, where it also pulled 485hp and 1160ft-lb on the dyno to rank as Top Blown Engine. Tom says there’s more in the engine and 500hp at the tyres should easily be achieved.

Despite that, the Statesman hasn’t been put out to grass on show duties — Tom’s still keen to smoke the tyres. “I built the car for burnouts and it will continue to do them wherever and whenever possible,” he says. But while he wants some burnout trophies to go with the show ones, he adds: “I’m a bit more mindful of the body and paint now and won’t be happy to let it scrape a wall any more.” 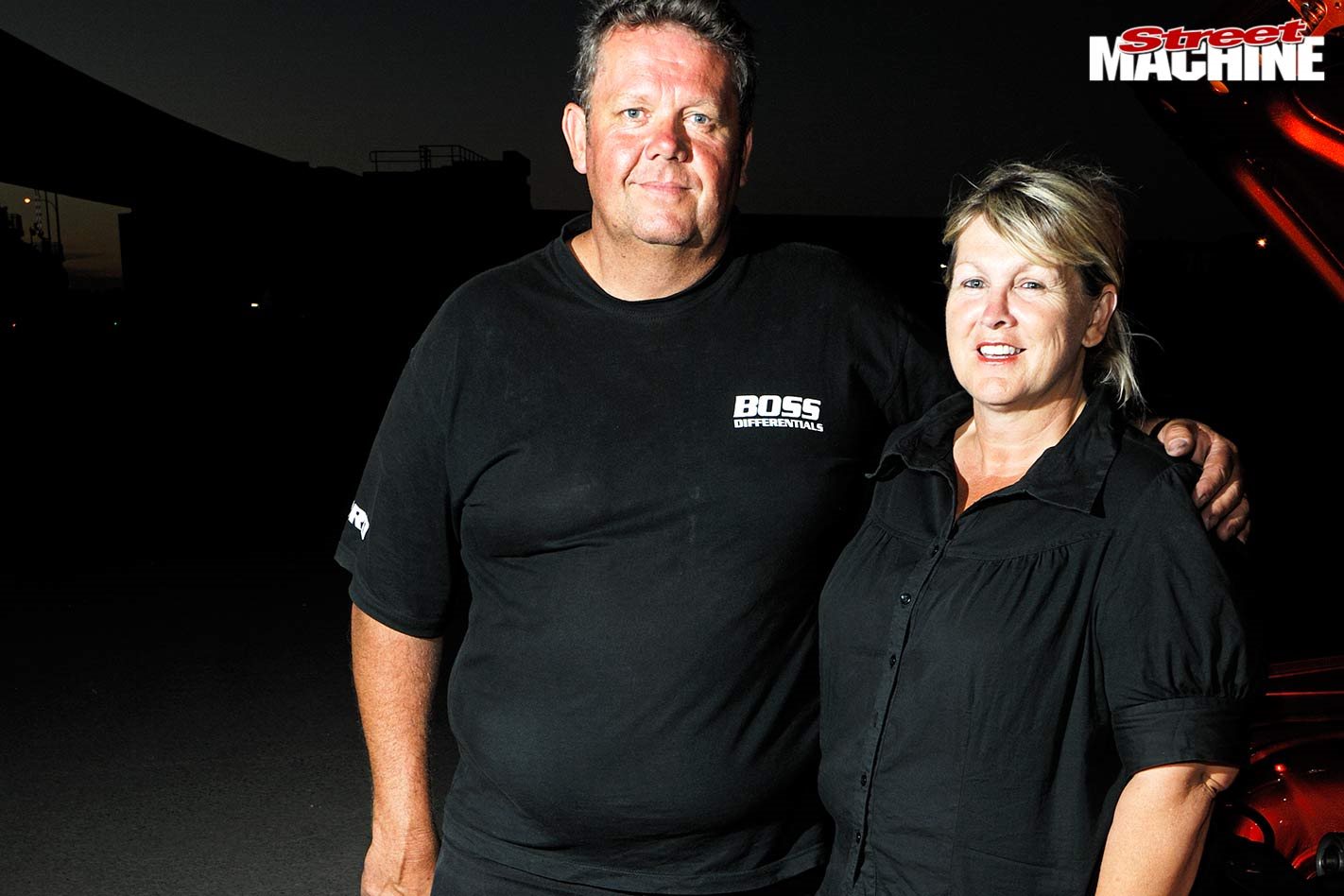 But if you think the Statesman wreck and rebuild was a big effort, it’s been a mere distraction from Karen’s project, which they’ve been toiling away at for three years. She’s not yet ready to disclose what it is but all will be revealed come July, at the Meguiar’s MotorEx in Sydney. If the Statesman is an indication of what they can come up with in nine weeks, then a project they’ve worked on for three years should be worth the wait.