When it comes to wheelstanding party machines, less is definitely more!

YOU reckon it’s funny from the outside? Struth, you should try it from the inside! I clamber into the passenger seat of the shorty HQ wagon and Nudge Peacock turns the key, filling the car with a menacing roar. He hauls the B&M stick back to first, hits the go pedal and we are away. I’m pinned back in the seat as the front wheels jump a foot in the air and the strip of country road gets suddenly short and narrow. Second gear, still pinned. I glance at the brake pedal. Please, now. But Nudge is having a ball and true to his word, his cut-and-shut shrimp is tracking straight as an arrow. 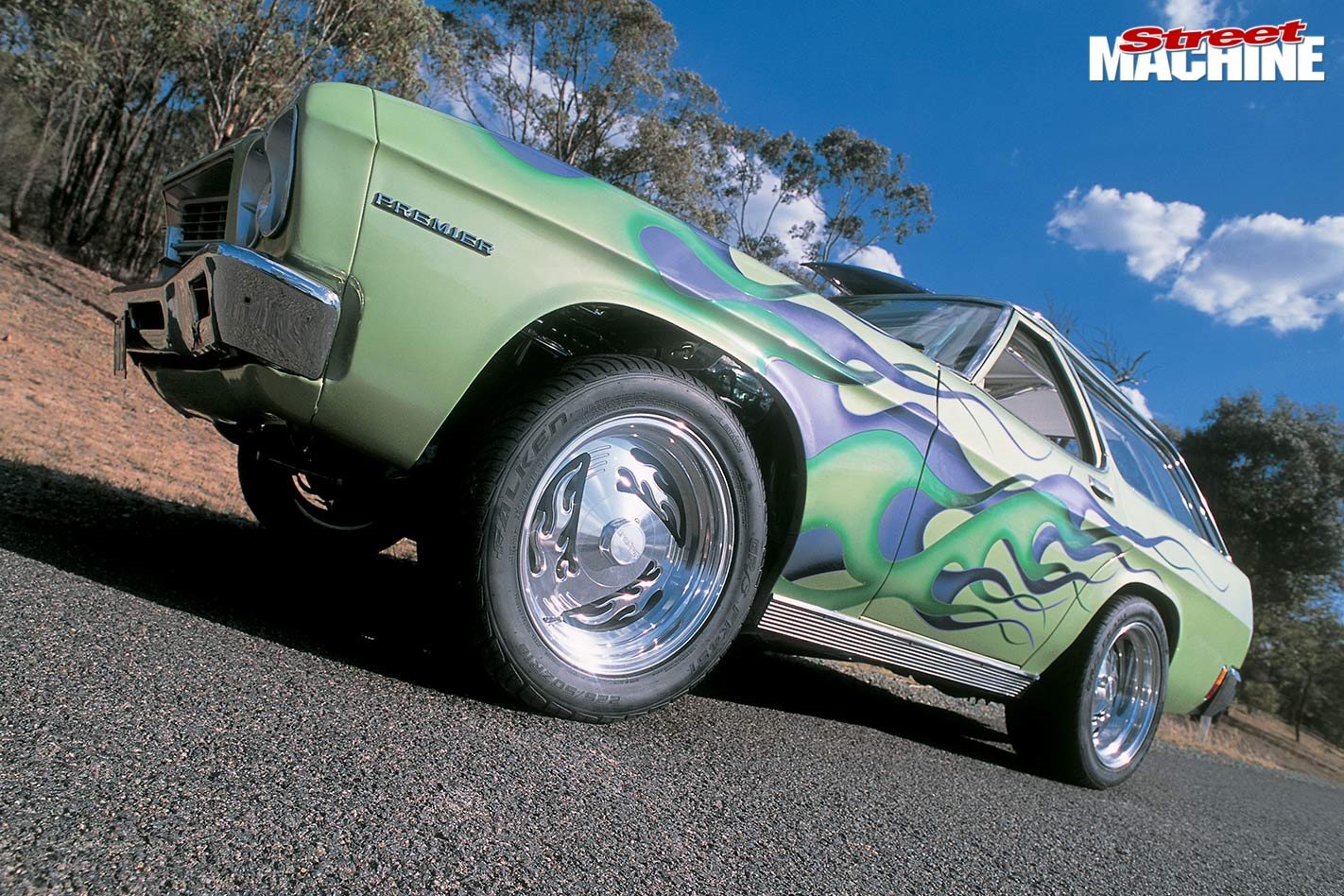 It’s been a cack watching him arc it up for the action pics. We tried to get a burnout, but the wagon’s so short it just ploughs ahead on locked front wheels, getting more and more sideways every second. We got the wheelie shots, of course. All Nudge had to do was sort of bunny-hop it once then nail it and the front end sprang into the air. He’d hold it for a tick then back off before the exhausts crunched against the tar.

The Holden was always meant to be a show car, but plans changed, as they do. His mate Mark Saver had already shortened the HQ when Nudge bought it from him, but it needed a heap more than a clean up, blue paint and some new wheels. 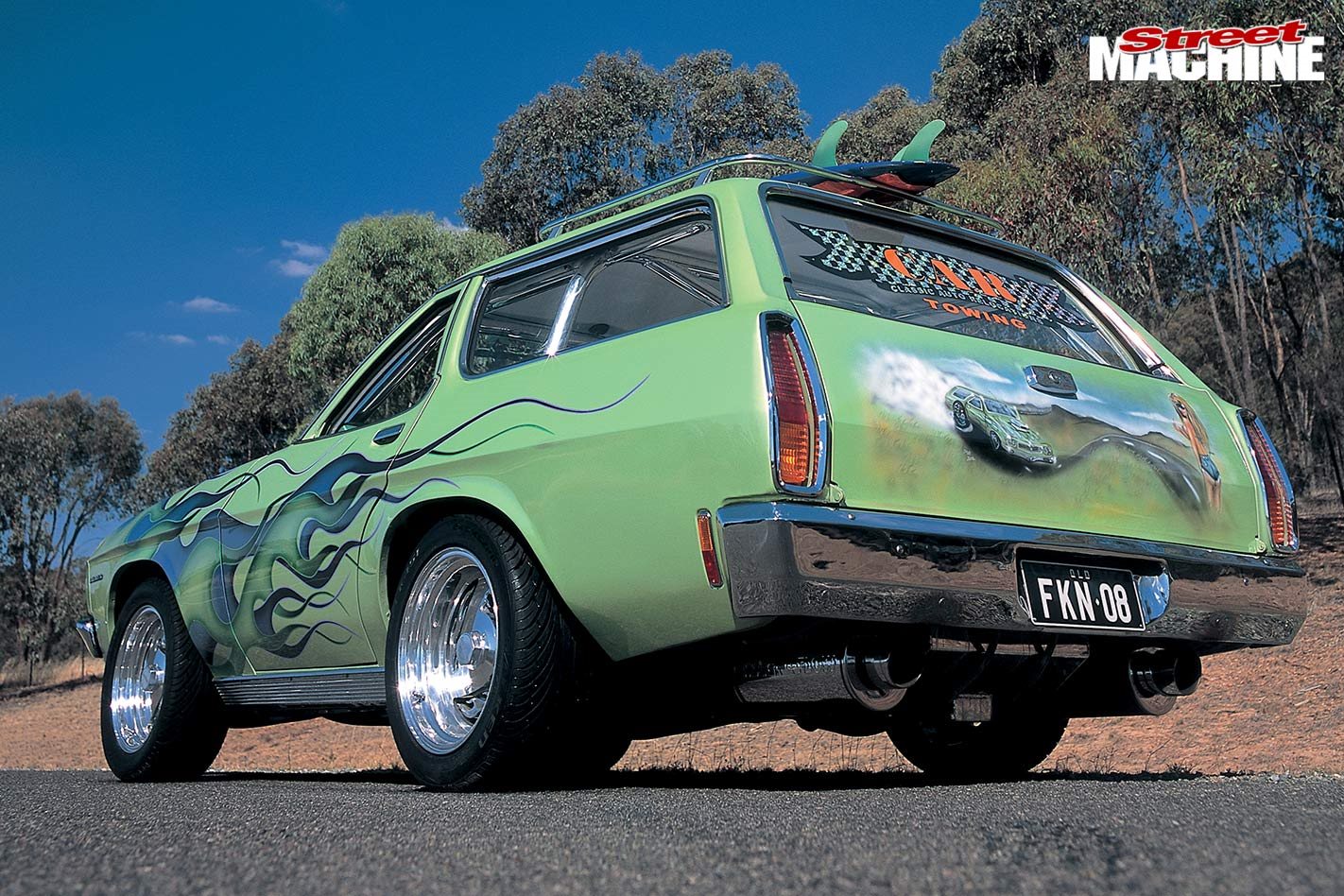 Mark’s chop job was first class. You can’t pick the cut line, not even along the roof.

“The body’s perfect,” says Nudge. “Couldn’t be happier with it, actually. It’s cut between the front half of the front door and the back half of the back door, with the back and front door joined, and you drive from the back seat. The roof was a bit awkward. It was a matter of getting the measurements right so it’d all join up.” 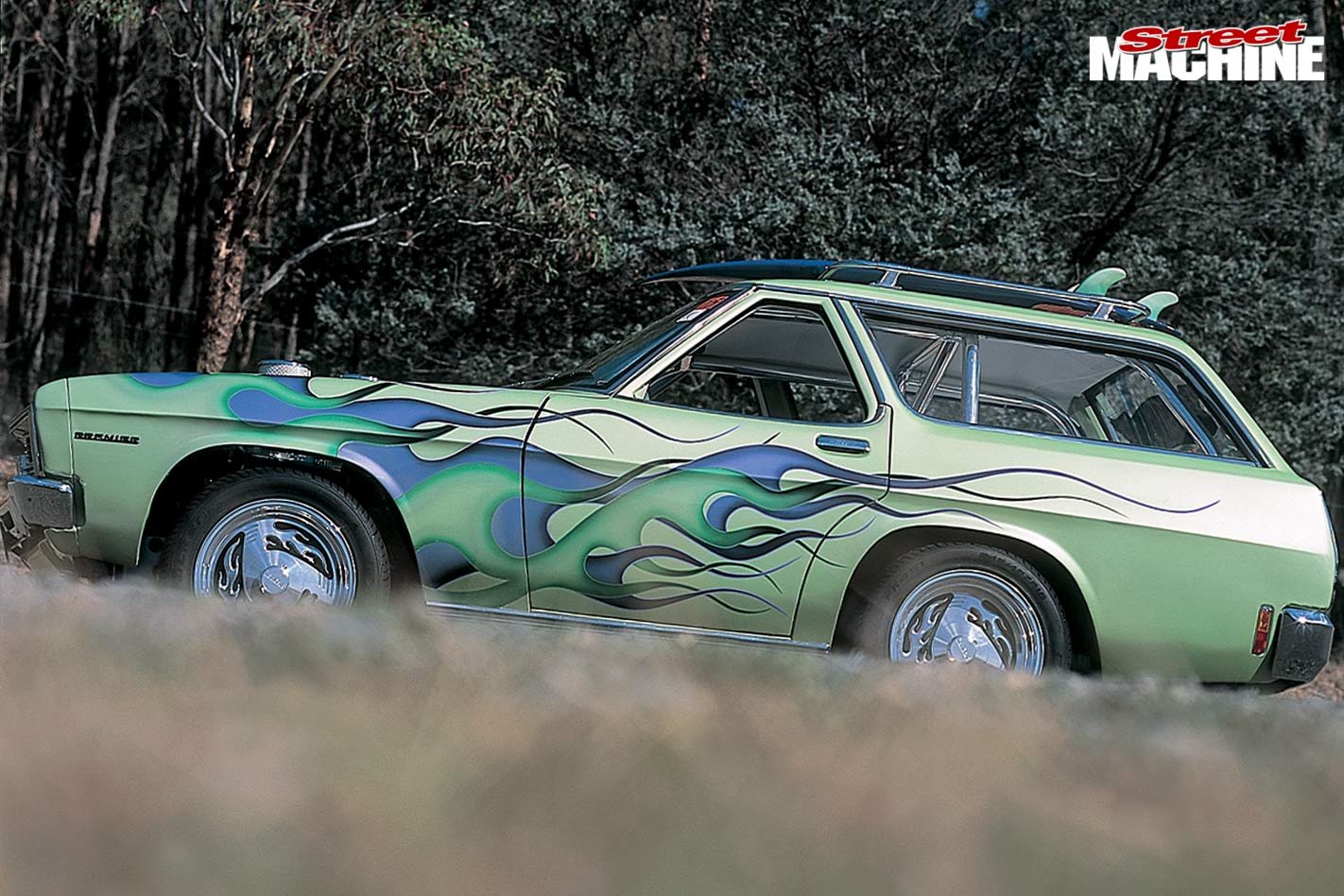 Daring to be different – as if he hadn’t gone far enough – Nudge picked the stand-out green and purple flame job, sprayed by New Image, and continued it into the interior. The dash was a deadest nightmare to get right. It’s been in and out of the car numerous times and wears three coats of two-pack now. The surfboard’s painted the same, too. And yep, it’s bolted on. Of course.

For grunt, Nudge went to Special FX, and commissioned a 308 that’d wheelstand. Mitch Bean (the dude with the 10-second Humpy we featured in SM April 2003) did the whole thing from the motor back to the diff. 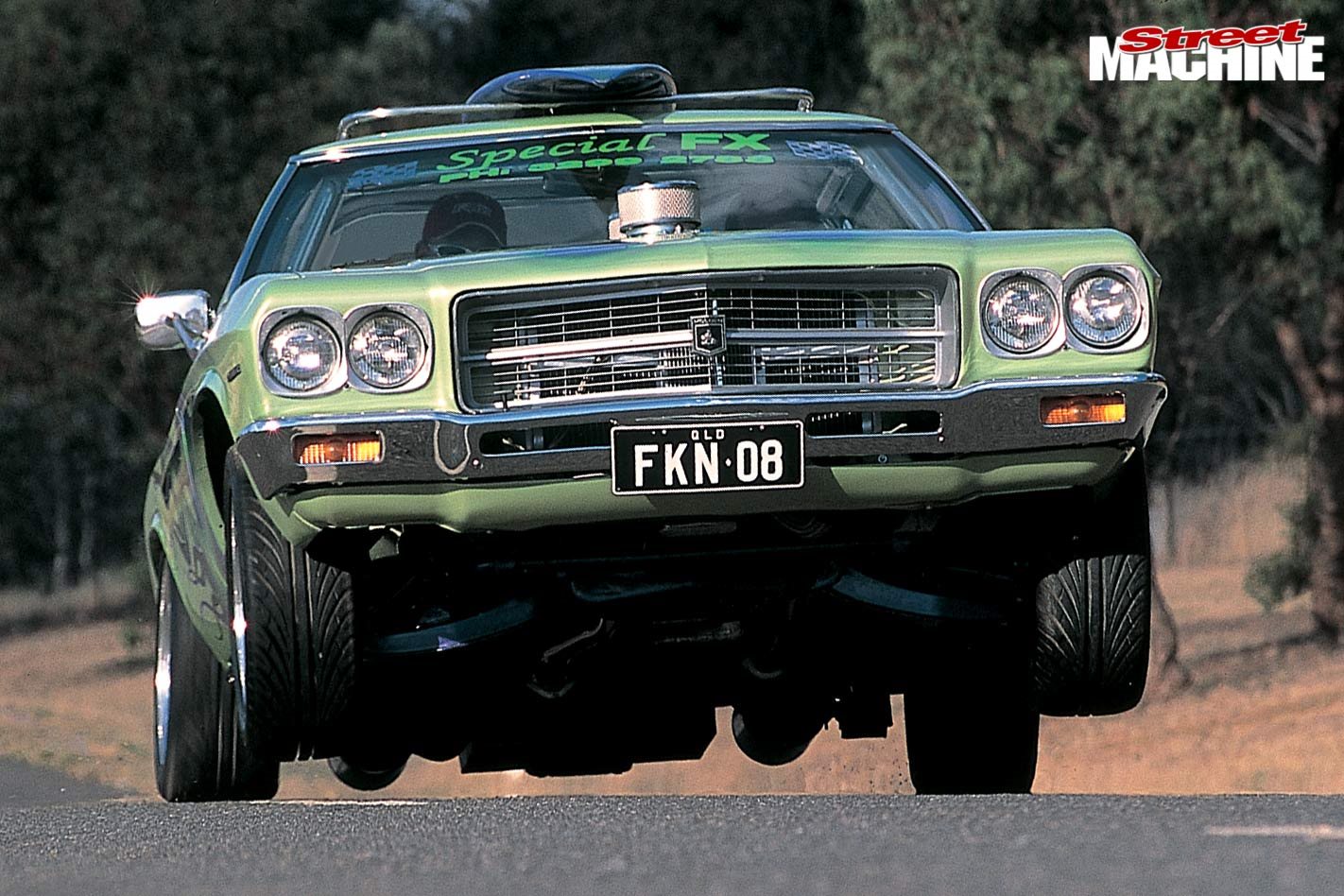 The starting point was a 333ci stroker with B-cast HQ heads, a Crane 288 cam and lifters, hardened pushrods, and 1.9-inch inlet valves and 1.6 exhausts on Crane springs. The forged TRW pistons sit on Chev rods, and the rings and bearings are from ACL. SL Race Fabrications built a big alloy radiator, as well as the 160-litre fuel tank. A pair of Holley Blues pump avgas to a twin-barrel 550 Holley carb under the Cain tunnel ram.

It’s finished off with MSD ignition and coils, and HPC-coated Genie extractors dumping into a three-inch system. It’s all good for somewhere around 420hp, with the kind of torque that launches shuttles. The nitrous hasn’t been touched yet, either. 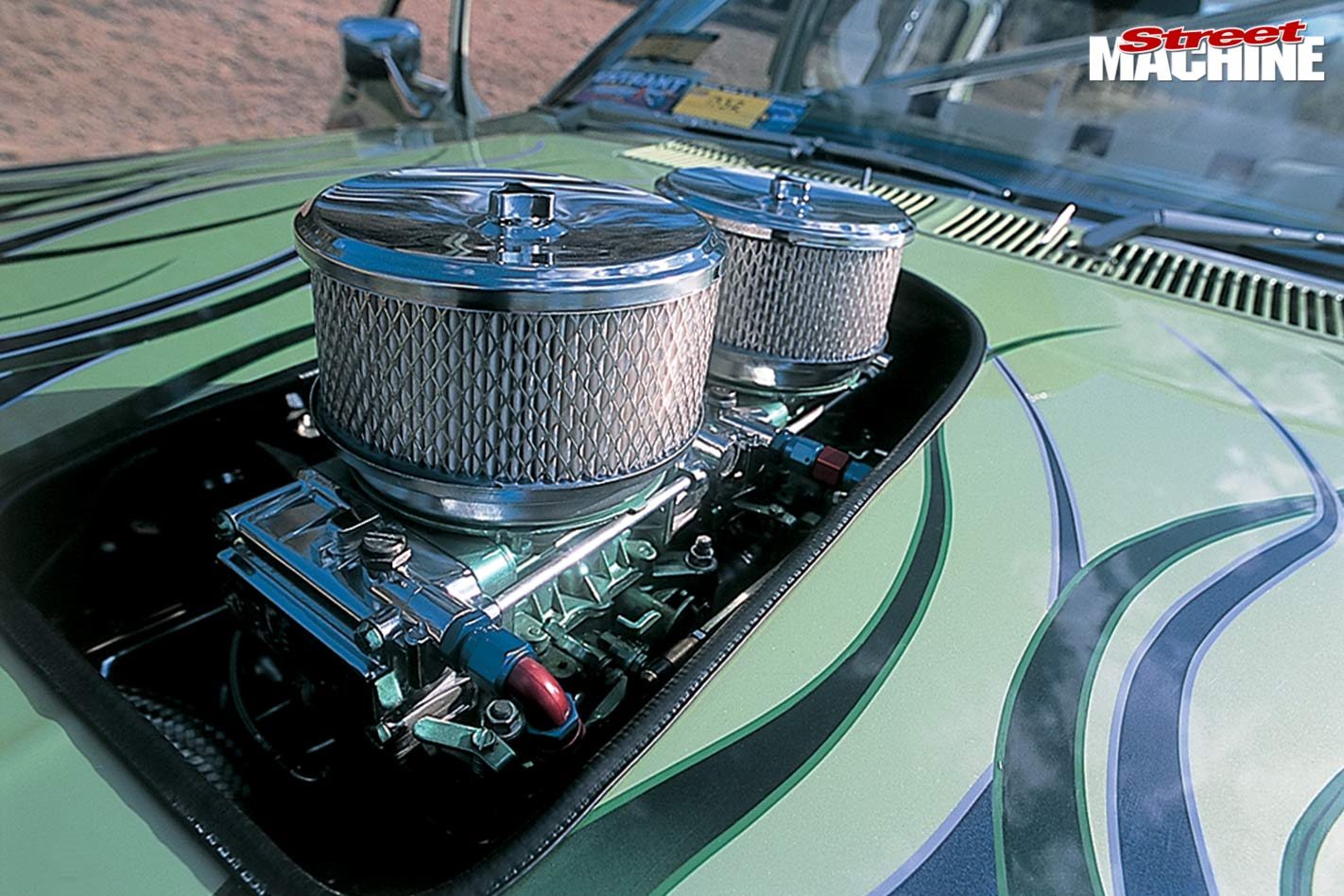 The Chev two-speed Glide is happy behind the donk, with its 4200rpm Dominator stall, and the custom tailshaft runs back just two feet before finding the nine-inch diff’s 4.56:1 Motive gears.

The shorty’s picked up awards from day one, including Chic’s Choice at Summernats 16, plus Top Car, Best Engine Bay and more at other shows.

“It’s the sort of car that you either love or hate, but I haven’t found anyone who hates it yet, so that’s okay,” Nudge laughs. “The reactions are unbelievable. People go berserk.”

Especially when Nudge chucks a wheelie. 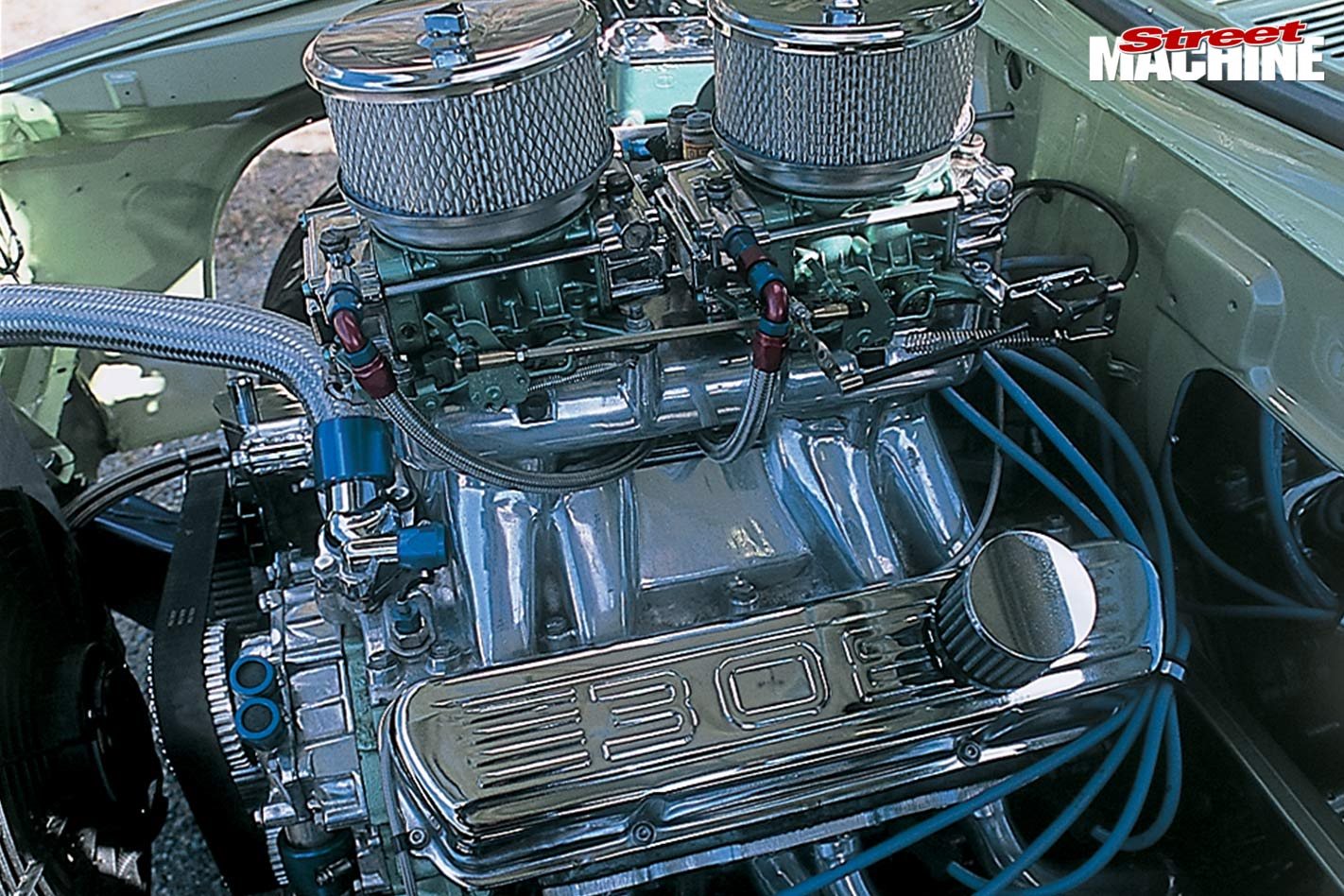 Winning Chic’s Choice at Summernats is a pretty neat achievement, considering it means your car has been picked out as the personal favourite of the bloke who runs the best street machine show in the world. Yet the gong almost went to someone else this year, because Nudge wasn’t going to bring the HQ at all.

“I didn’t think the car was up to Summernats standard,” he reckons, “so I was just going to fly down for a look and was leaving the car at home.” 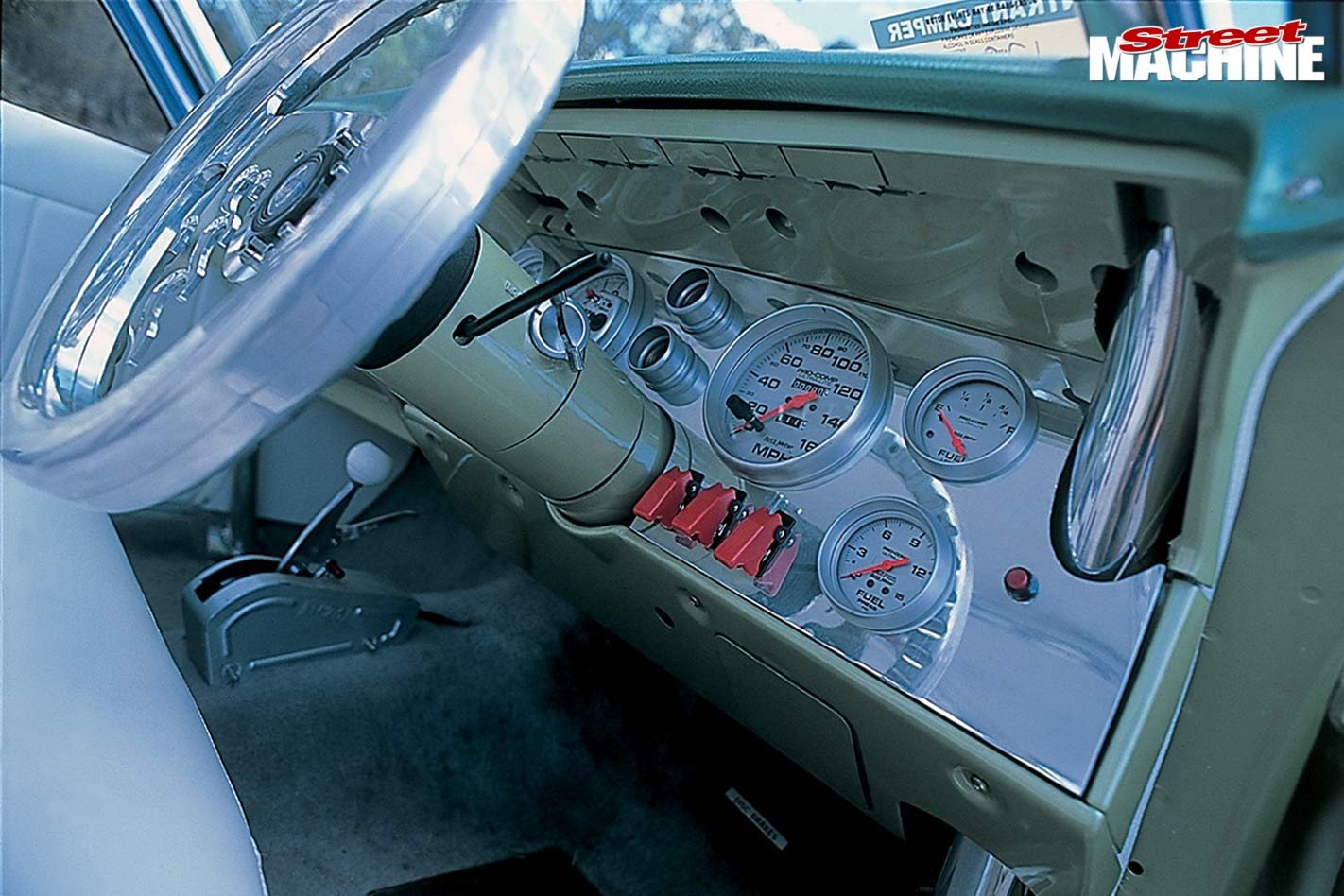 Then Brad rang, just three sleeps before Nudge’s flight. Brad, of Classic Auto Relocations, has carted the wagon everywhere from day one – every shop, every show. Nudge says Brad’s never put a mark on the car after god knows how many trips around their Queensland show stomping grounds.

“Without him, it wouldn’t have been at Summernats,” says Nudge. “He put it on the truck and towed it down at no expense to me.”

Thanks also to: Shannon, Jason, Spawny, Chunky, Willy, Jim. And wife Roseann and son Ricky for their support.