Drag cars get built to show specs, so why not a Bash car too?

MOST Bash cars — built to compete in Variety Club Bash events — look like little more than random old machines with 4WD tyres, wacky paint and flashing lights. And that’s okay; it’s not a car show, it’s about raising money for disadvantaged kids and having fun. And if the car breaks down, you just crack open a tinnie and wait for the rescue party. 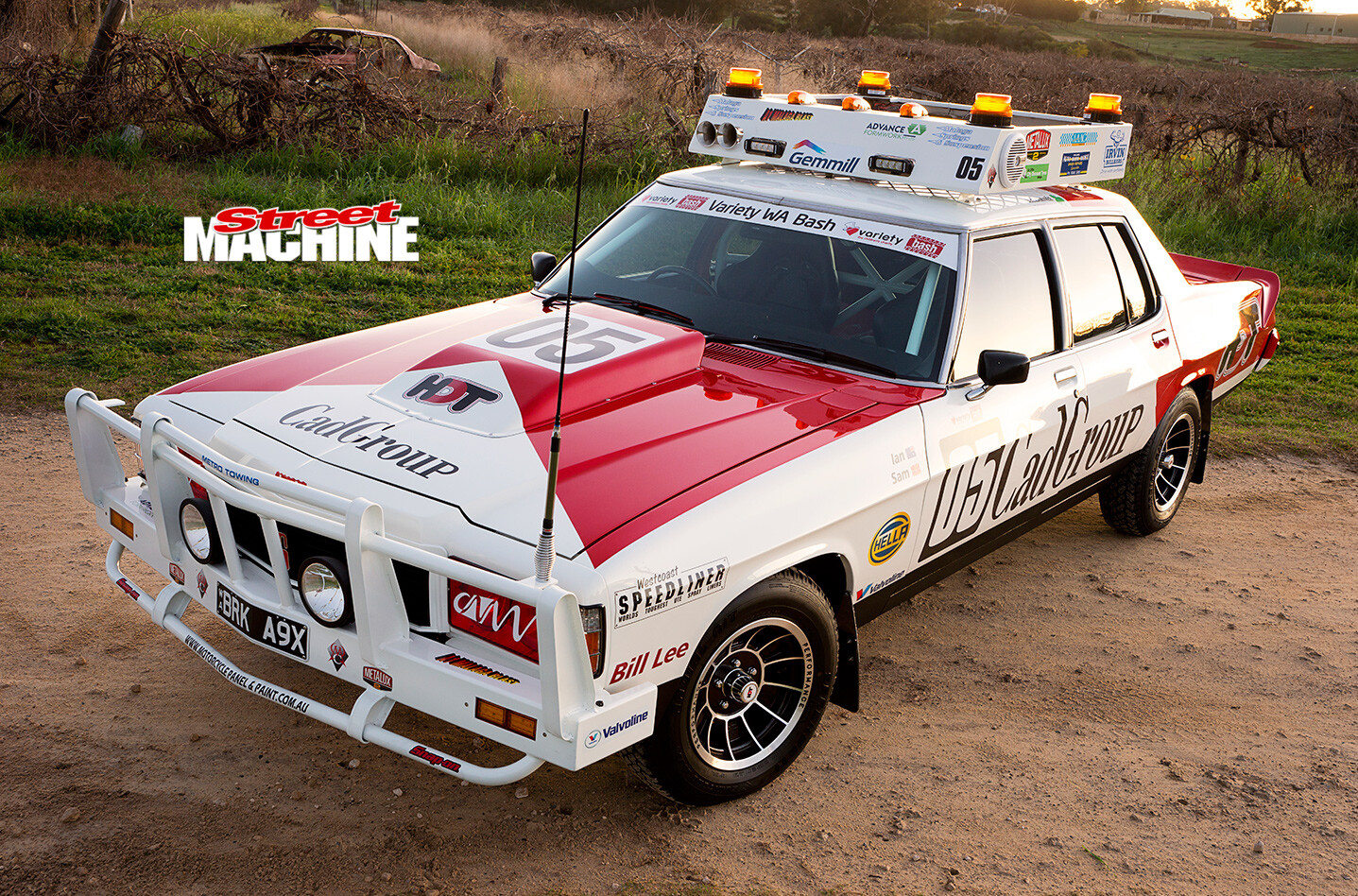 While Chuck Powell’s HX Statesman meets those criteria, this isn’t a slapped-together quickie from some bloke with a thing for Brocky. This car was built in 10 months by a great team.

“Once the people I know got involved in this project, it took off and I had no control of it. Some of the attention to detail is ridiculous. Look at the door trims by Simon at Motorcycle Panel & Paint — you couldn’t pay for them and if you wanted to, you wouldn’t! Because Simon’s a mate and he’s doing the Bash with us next year, that’s what happened.”

And that’s just the start of it. Everywhere you look, the details are amazing, especially considering the abuse it’s going to cop covering 2500km between Exmouth and Perth. This is the first Bash for everyone in the team and the first Bash car they’ve built.

“I’ve done other Variety-related car events. I did the Peter Brock 05 Drive a few years back. I’ve got two WB Magnums and we sent them across to Melbourne on the train, then went and did the drive through Victoria and it was fantastic. 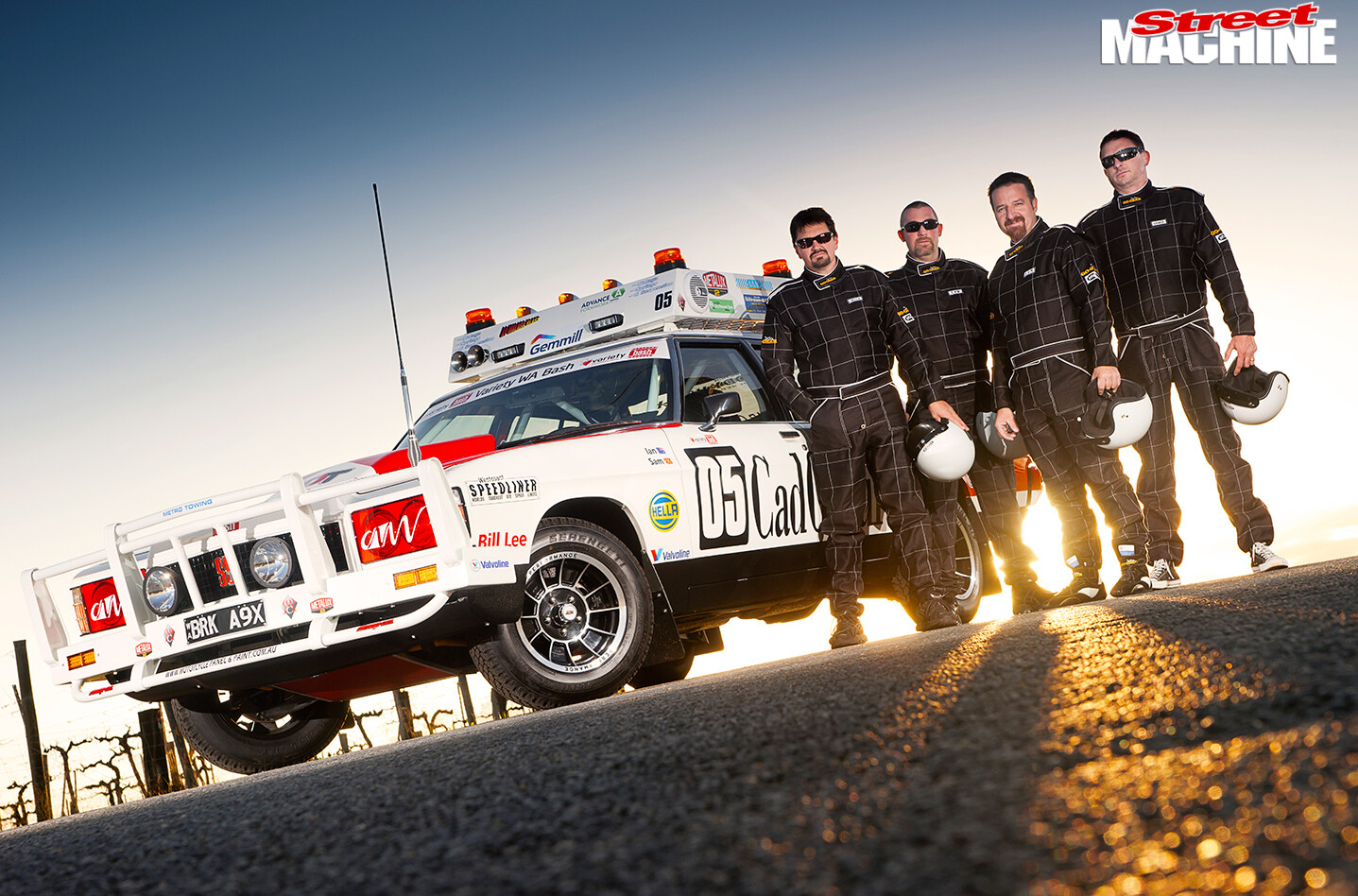 “All the guys on it were Variety Club guys and it was just such a good crew and it’s a really good cause. I like giving to charity but it’s boring when you just write a cheque. I love cars so it’s a great mix. My four kids are all healthy, so why not?” Chuck says.

“We do a lot of four-wheel driving. We hooked up the camper-trailer and did the Gibb River Road a couple of years ago. When we came to the Pentecost River, we were in big 4WDs and being really cautious. There were two Bashes on the Gibb River at that time — one from Queensland and one from WA — and all these lunatics came roaring through the river in these old heaps while we were sitting there worrying about it!

6
The cabin is covered in Speedliner, making it easier to hose out

“If you get stuck, it’s half the fun. Just don’t get out of the car because there are crocodiles!”

When it came to the theme for the car, it took a little bit of thinking, but in the end it was a no-brainer: “You’ve got to be a bit practical. Let’s say you pick SpongeBob Squarepants. You’ve got to drive the car into town wearing a big SpongeBob suit. We’ve got a pair of overalls and a helmet!”

6
The fuel tank fits behind the seats

The choice of car was a no-brainer too. Let’s just say he’s got a thing for Statesmans: “It’s probably up to 16 at the moment. My old man had an HX Statesman in Contessa Gold and it was a beautiful car. From then on I had a thing for them.

“The first car I bought was a gold HZ Statesman. I went to Summernats in ’89 — drove across. When we got back, I pulled it apart. The panel beater went broke and half the car got stolen. 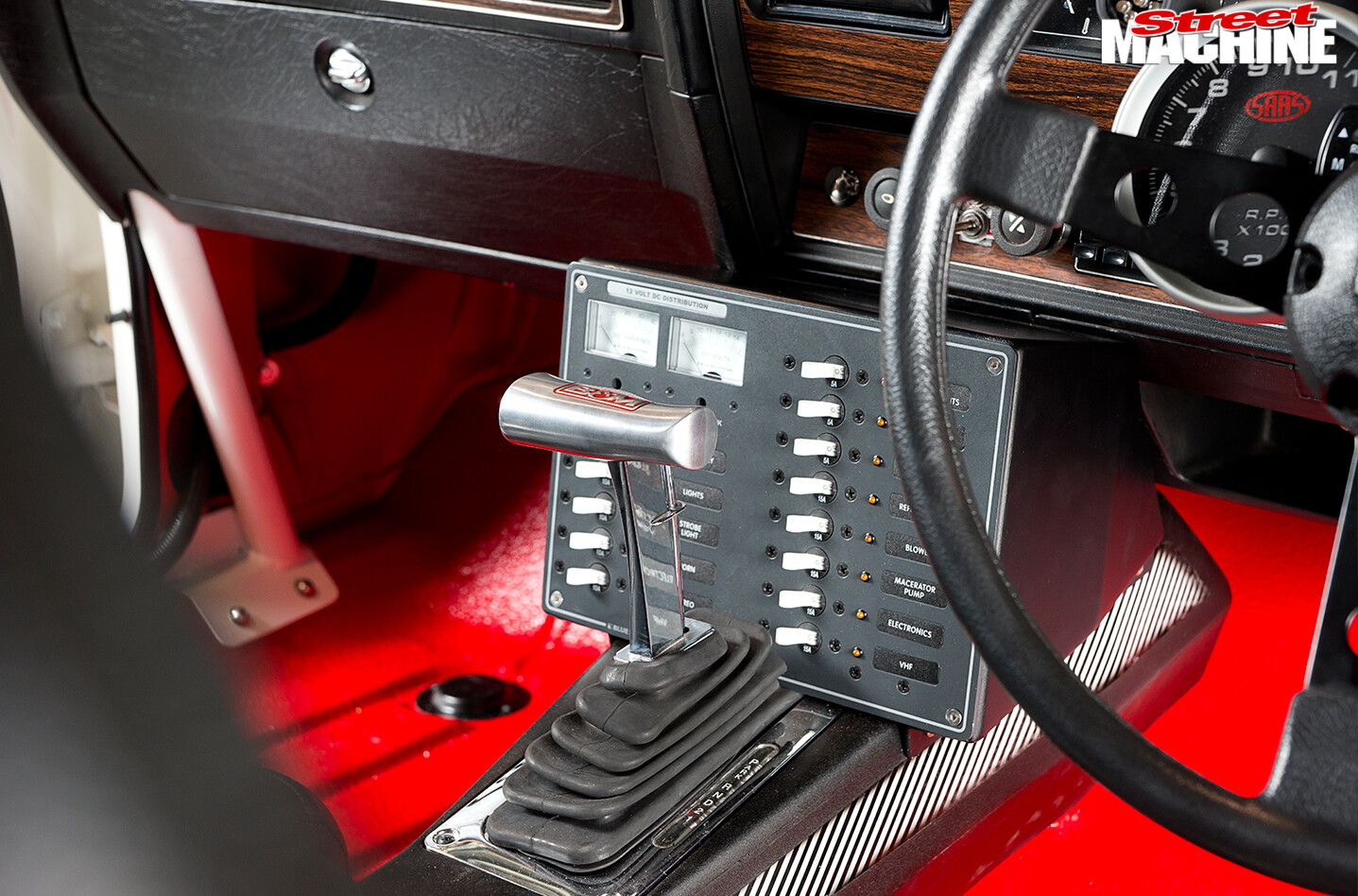 “Since then I’ve managed to collect one of every model from HQ to WB in various shades of gold, all stock as a rock. I also picked up two Magnums and for my 40th, my missus bought me an HQ 350.

“When my old man died, he left me a white WB that had belonged to Brian Burke while he was premier. I’ve also got an HZ SL/E drag car which I’m just finishing off with a big-block Chev and an 8/71 supercharger. That car lets me leave the rest alone. Then I’ve got a couple of surplus cars that I’ve come across and just couldn’t pass up.” 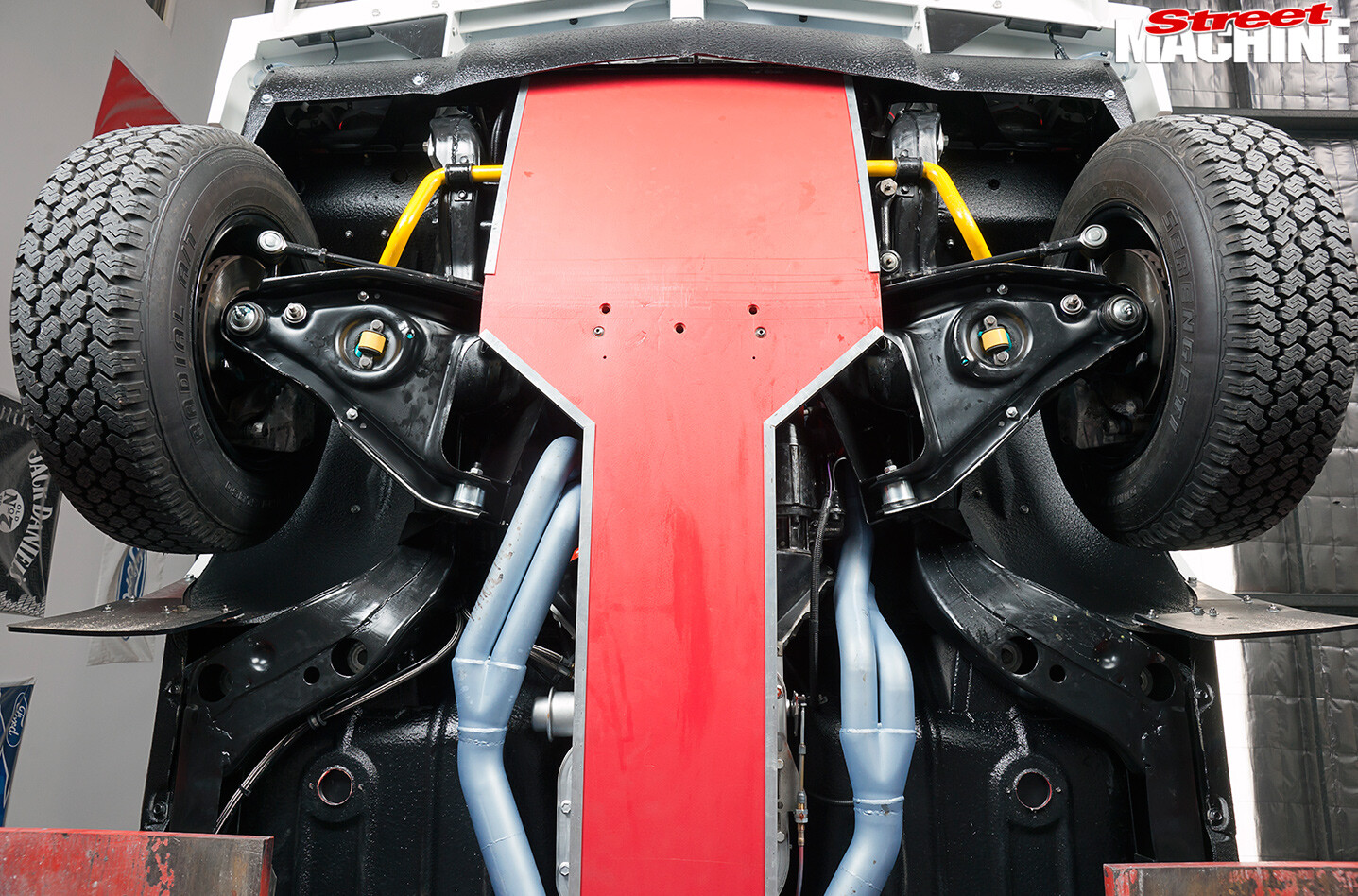 And the Bash car, of course. We can all see that it’s clearly an HX. Except that it’s technically a WB Statesman because that’s what chassis is underneath it. The WB chassis was quite a bit beefier than the HQ-HZ version and this one copped extra bracing courtesy of Brett Young from Bertfab who has a lot of experience in extreme off-road racing.

As well as strengthening the chassis, Brett modified and strengthened the suspension to make sure it would withstand the punishment, and fabricated the bolt-in rollcage, modifying the dashboard so that it wraps around the ’cage.

While Chuck doesn’t plan on crashing, it’s nice to know that if something does go wrong, the car — and more importantly, the occupants — will come out of it okay.

Sam and Quinny from Malaga Auto Body Worx went to town on the paint and bodywork, and it really is beautifully detailed, and not just on the exterior. It was hand-rubbed inside and out, then coated with Speedliner; black underneath, red on the inside and in the boot. It’s a super-tough coating that will happily take a beating and remain easy to clean.

6
A drop box sits where the fuel tank used to be, allowing the spare tyres and fridge to fit under the lid. Externally, it looks like a drop tank

The HDT scheme was painted using the exact colours Brocky had on his A9X — Marlboro Red, Tuxedo Black and Palais White. No vinyl wrap here; everything was painstakingly masked before Sam applied the flawless paint. 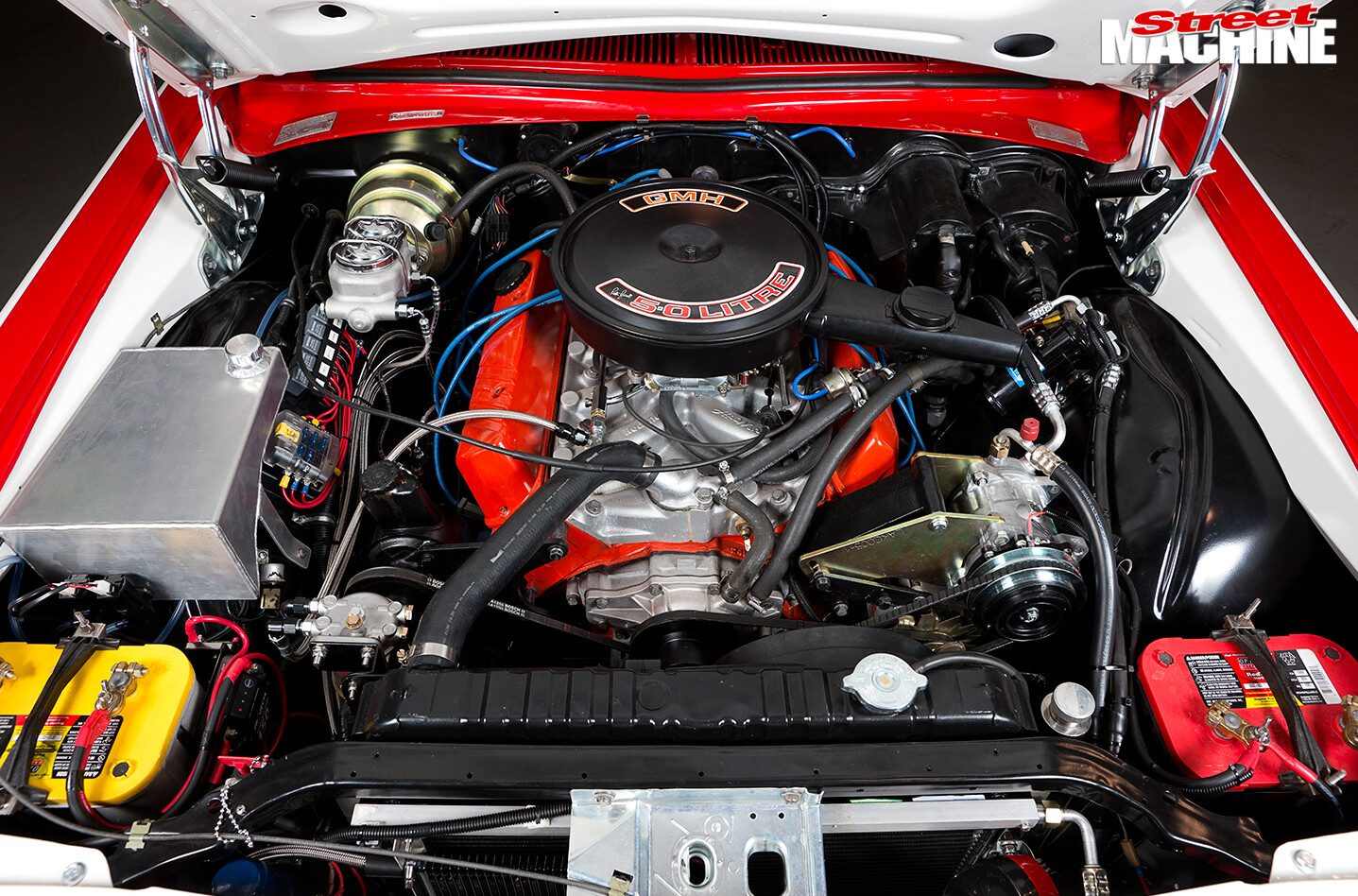 Under the hood is a warm 304 with a set of VN heads and a Scat stroker crank that takes it out to 355 cubes. A Redline Hi-Winder intake is topped with a Holley 750 double pumper. A set of extractors feed into a twin 2½in stainless system fabricated by Dom at Prestige Exhaust and fitted with X-Force stainless mufflers. There’s power steering and air conditioning for comfort, while a Turbo 400 and nine-inch make up a bulletproof driveline.

It has to be the best-looking Bash car ever and the plan is for it to do many events in the future to raise money for Variety and other worthy causes.