OVER the past 40 years the Holden V8 has earned a hell of a reputation. It’s run and won just about everything in the land including Horsepower Heroes, punching out more than 1400rwhp at Summernats. Not bad for a factory block. 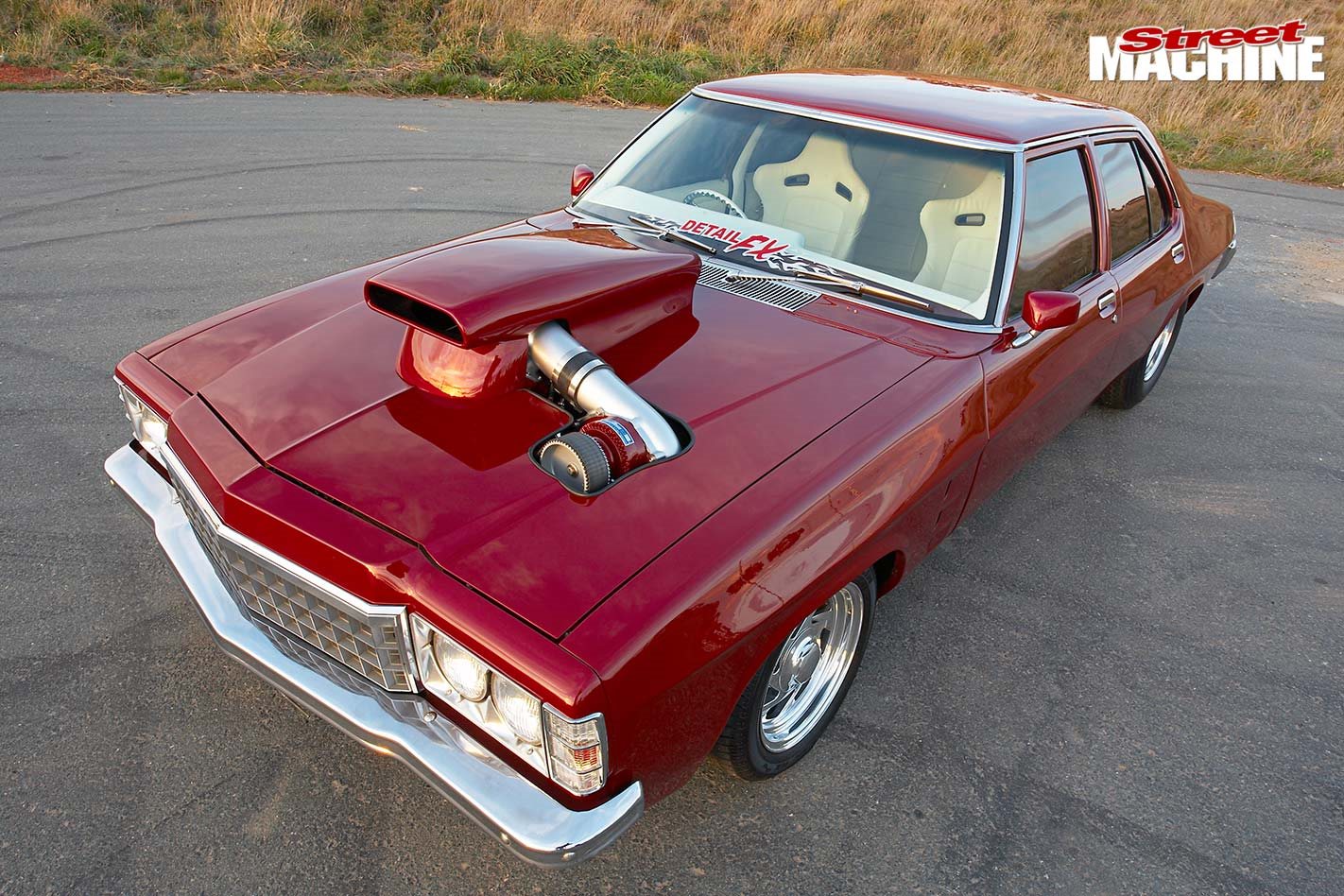 So when Graham Longhurst says he’s had enough of breaking them you know he’s pretty hard on engines.

“I do more burnouts than the average bloke,” Graham says.

He does love his Holdens though, and he’s forever had a hankering for a HZ Premier.

How tough is that stance? Rear rims are 15x12 Weld Racing items. Gorgeous paint is a Protech custom metallic red

“Ever since I was a kid I liked the look of the Prems; I’ve always been a Holden man,” he says.

His first car was an HQ panel van packing a 253 V8 and a Trimatic but Graham sold that to make way for the HZ Premier that he bought in Sydney about 15 years ago.

It was also powered by a 253, with a four-speed box instead of the slush-o-matic but that didn’t help with its longevity.

“I blew the ’box up the first week I owned it,” he admits. 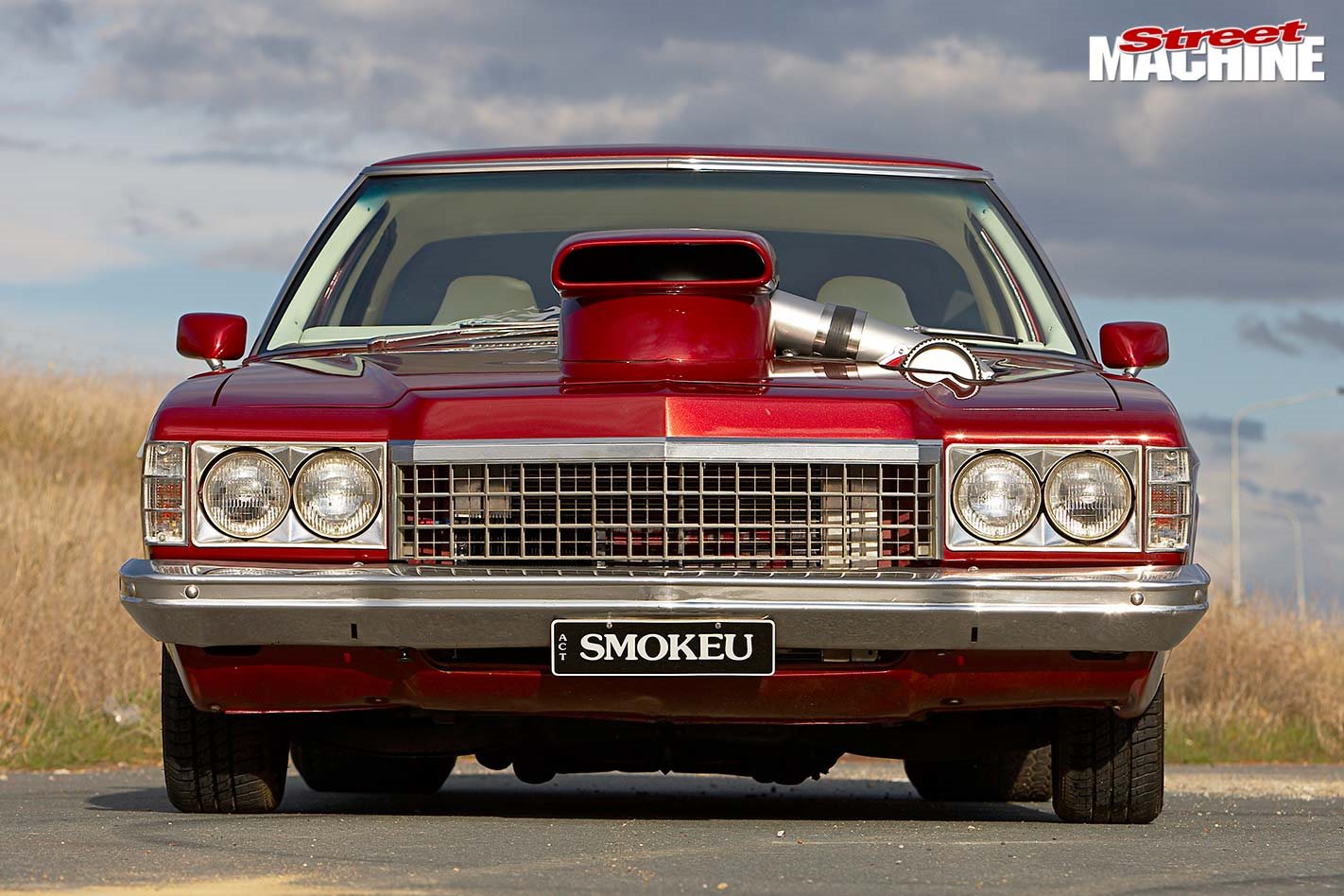 In went a Saginaw four-speed. Metallic blue paint soon replaced the factory yellow. Then it was time for Graham’s first trip to 308-land and he slotted a Holden ‘big-block’ up front.

That one actually lasted a few years until Graham lunched it in the burnout comp at the South Coast Nationals in Moruya. Another 308 was sourced, this time with a Turbo 400 behind it, but the new engine had an unexpectedly short lifespan.

“I actually blew that one up doing a burnout in front of my girlfriend’s dad’s house. The cops came and everything,” Graham says with a laugh. 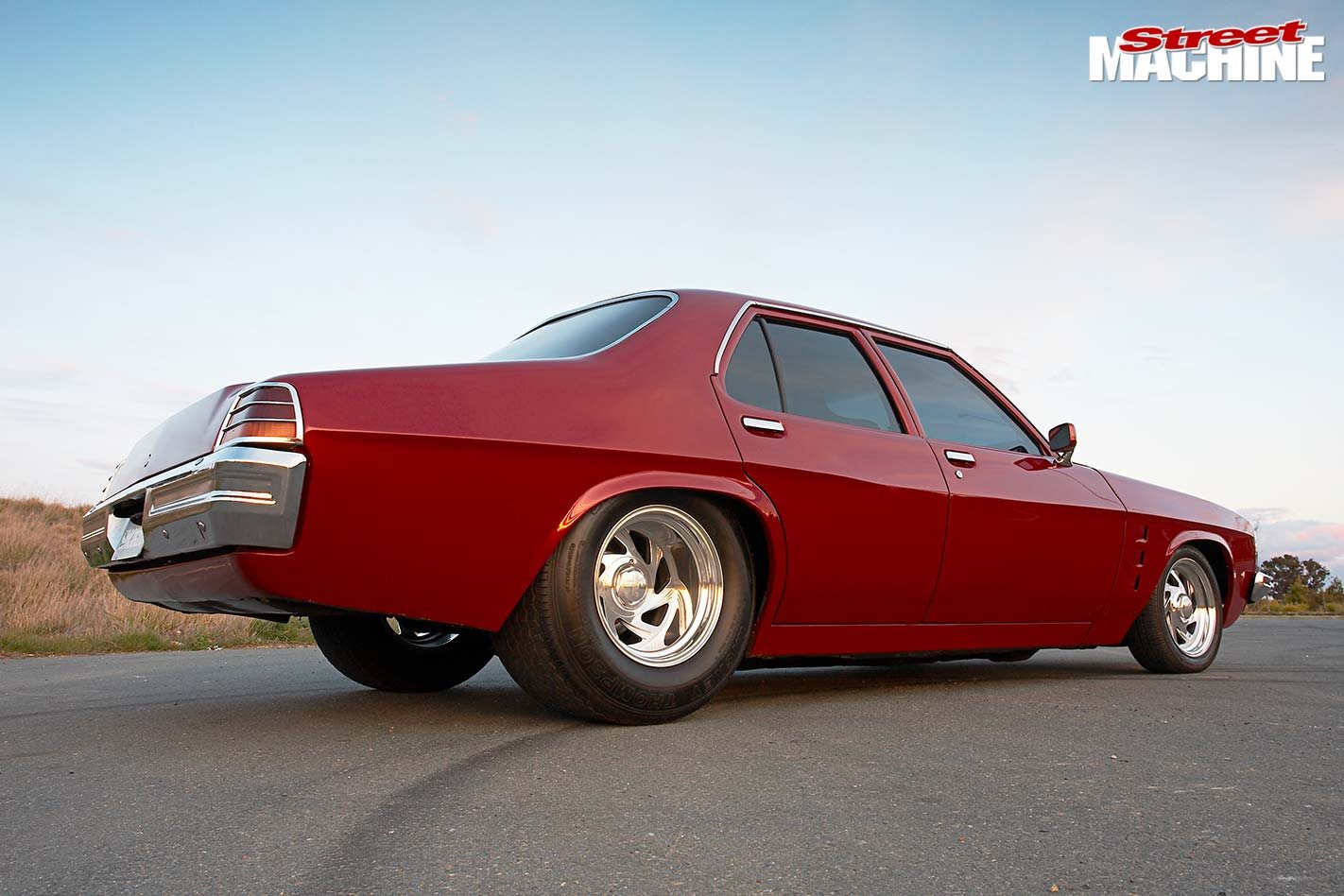 Fortunately this was back in the good old days when the cops didn’t confiscate cars and the HZ lived in the shed for four years when Graham decided to move to Queensland for work.

Upon returning to Australia’s capital, Graham hauled the HZ out of the shed and sent it off for some paint while the engine was filled with good stuff. The colour was the same Protech Custom Red Metallic that you see here and just one week later Graham went to the South Coast Nationals again.

“I took it back to Moruya to have another go at the burnout comp and blew the tyre, wrecking the paint job,” Graham recalls. “But I got second place.” 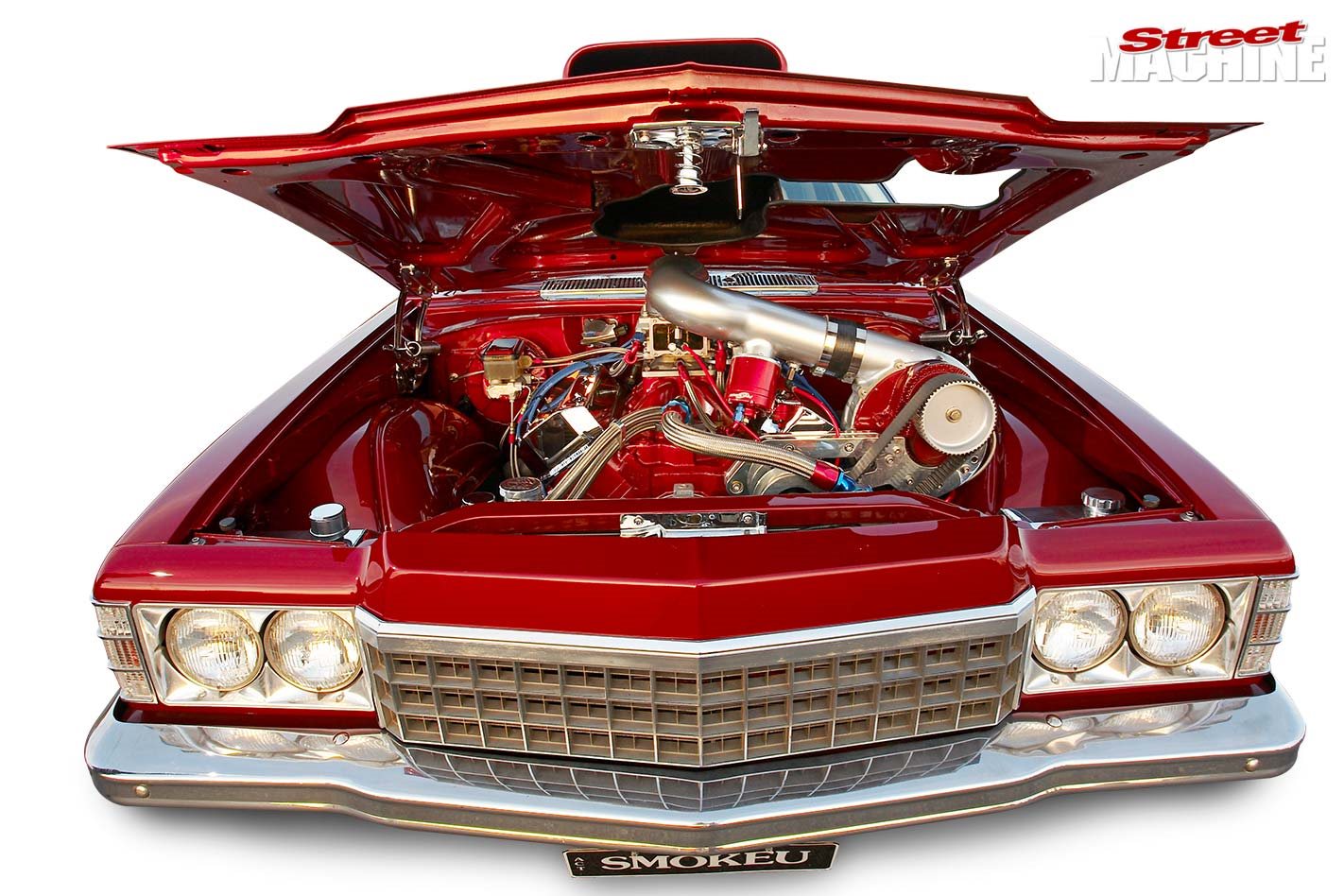 From there Graham did more shows and more burnouts before deciding to put the engine on alcohol to keep things cool while he was frying the tyres. Only problem was that while tuning on the dyno the Holden donk decided to punch a rod out the side, thus ending Graham’s relationship with Holden V8s. 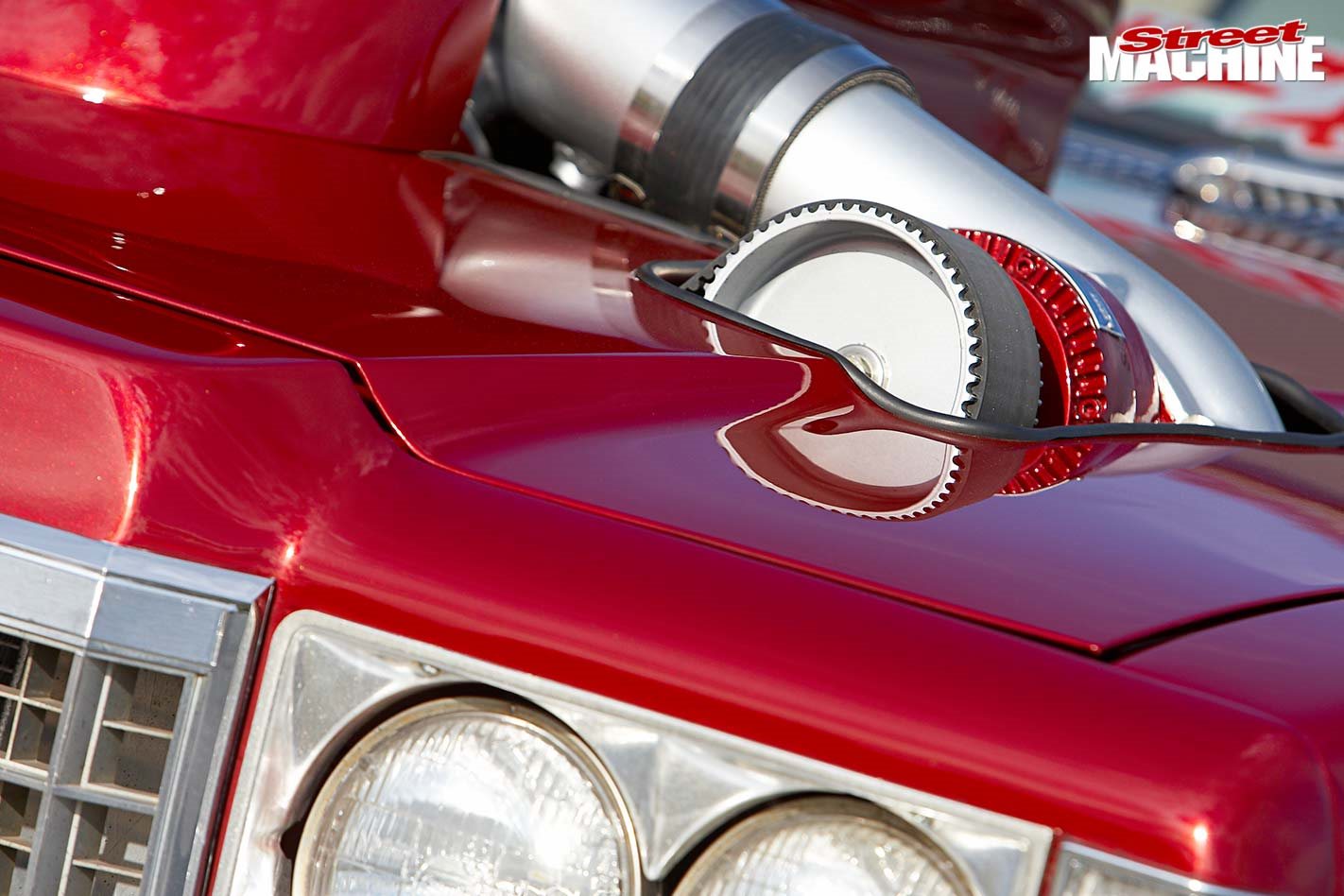 So Graham got on the phone and ordered the engine of his dreams. The trouble is that some dreams turn into nightmares.

“I only gave them three weeks notice to build the motor; my mate was bringing a container in,” Graham says.

The motor made the container in time and it soon landed on our fair shores, for $1000 freight, which left Graham thinking he was way ahead of the game.

With the blower-prepped 540-cube powerhouse ready to be dropped in, the guys got to work fitting it.

The tall custom rocker covers rubbed against the heater, so they removed that and then got to work welding a flat section into the firewall. 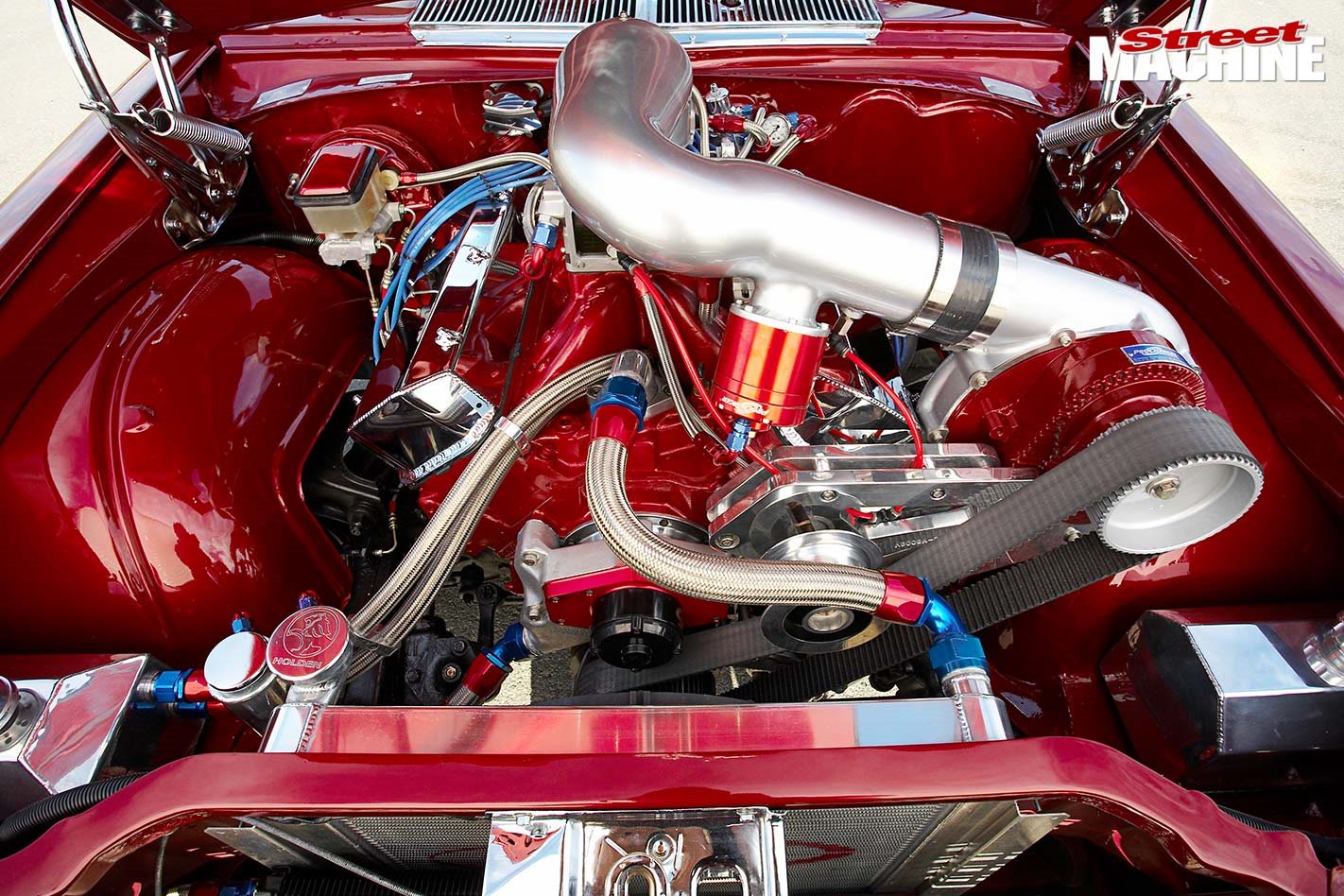 When you’ve got 540 cubes you don’t need a lot of boost to make some serious grunt. Graham’s original plan was to run 30psi boost and C16 but at the moment, pump fuel and 14psi boost does the job to the tune of 1276hp

That’s when Graham learnt a very valuable lesson about welding in cars. They’d removed the carpet, front seats, and underlay up front but the rear seats and rear underlay were still inside when the welding started.

“When the sparks hit the horsehair she just went up in flames,” Graham recalls.

The damage was limited to the rear seat and door trims and with the help of good mate Rodney Ritchie (SM, Oct ’08) they decided to get the 540 big-block fired up and take her for a run at Powercruise naturally aspirated.

There was only one week to get it ready — street machiners love a deadline it seems. 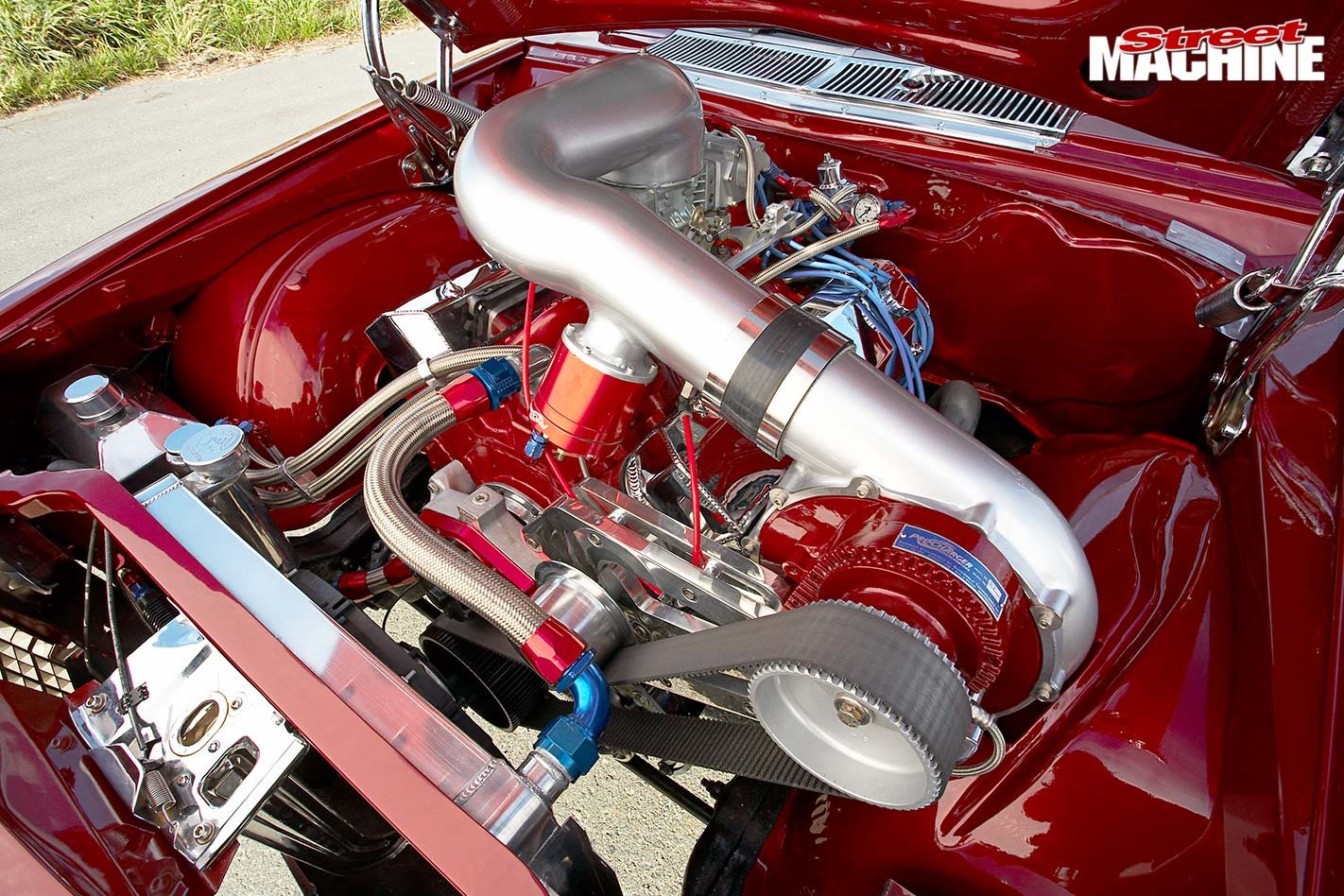 “Everyone said we couldn’t do it,” Graham reckons, “but after five sleepless nights we had her up and running.”

“She had a half-burnt interior and a bare-metal engine bay but we proved everyone wrong and we were off to Powercruise.

“It felt by far the fastest thing I’ve ever been in,” says Graham, “Fives times as fast as my 308. It felt really good.”

Yep, it was great for about four hours and then the new motor turned a bearing, stuffing the crank and two conrods — Graham wasn’t impressed at all.

“No I wasn’t, especially after just four hours. But they did send me out a new crank and a set of rods. That took them about six months though.” 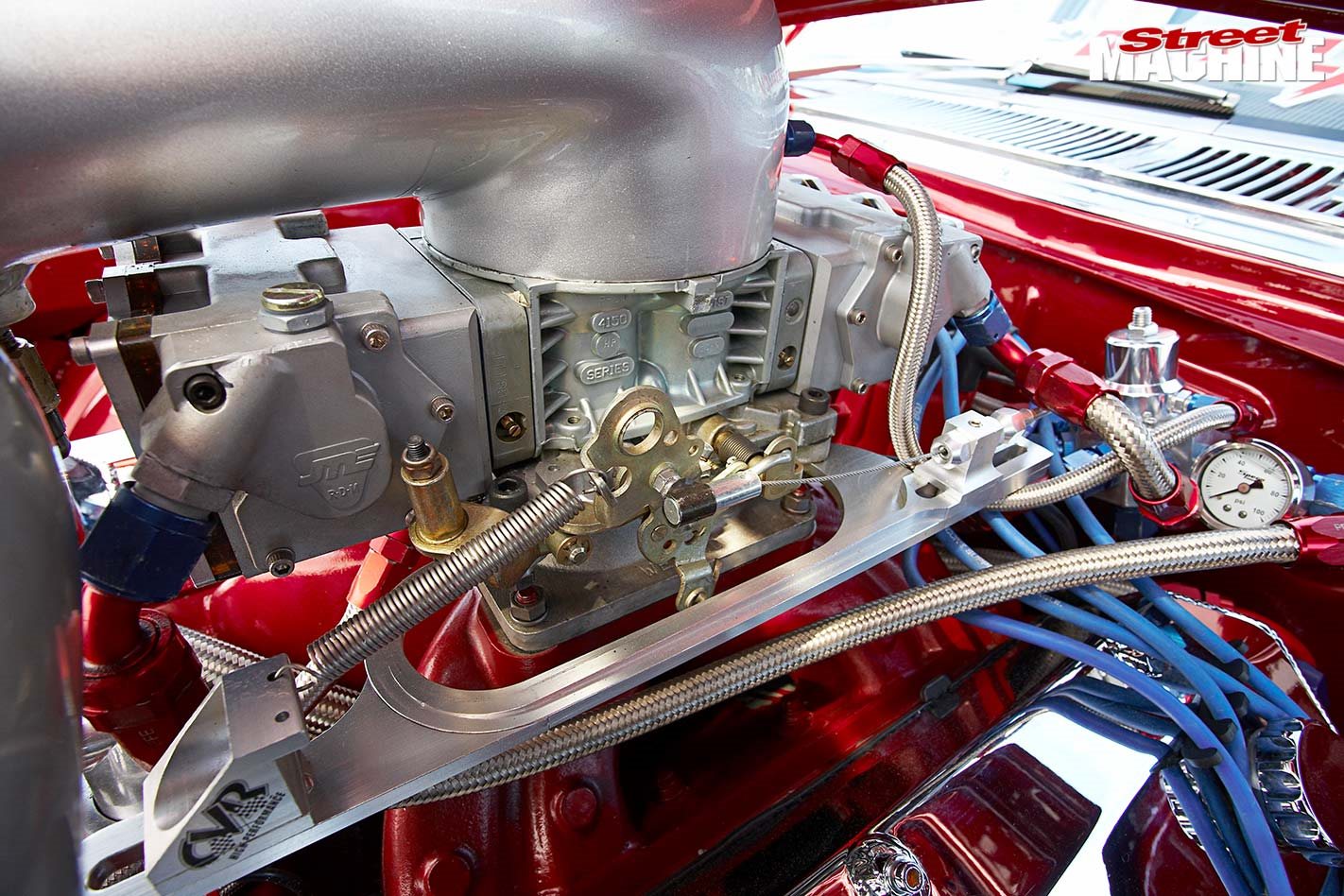 Under that blower and pipework there’s a blow-through prepped carb with dual feeds and twin-needle float bowls. Further down, a Snow Performance methanol injection plate keeps the intake temps down

This time Graham let Rodney do the engine for him and it now runs an Eagle steel crank and Carillo rods, along with a pair of CNC-ported Dart Pro-1 heads. Just as with Rod’s Monaro, the plan was to go for a ProCharger and with the D3R blower hanging off the side the blown 540 cranked out 1276hp on the dyno, running pump fuel and just 14psi.

Of course the chassis wasn’t up to the task so while Rodney was doing his thing, Graham shipped the body off for a set of wheel tubs and a ladder-bar rear end. Diff Doctor set up a new sheet-metal nine-inch running 35-spline Strange axles and a set of 3.7 gears, while the boys cut out the boot and welded in a new flat floor. The boot now plays host to four Bosch 044 fuel pumps, a 60-litre fuel cell and the battery. 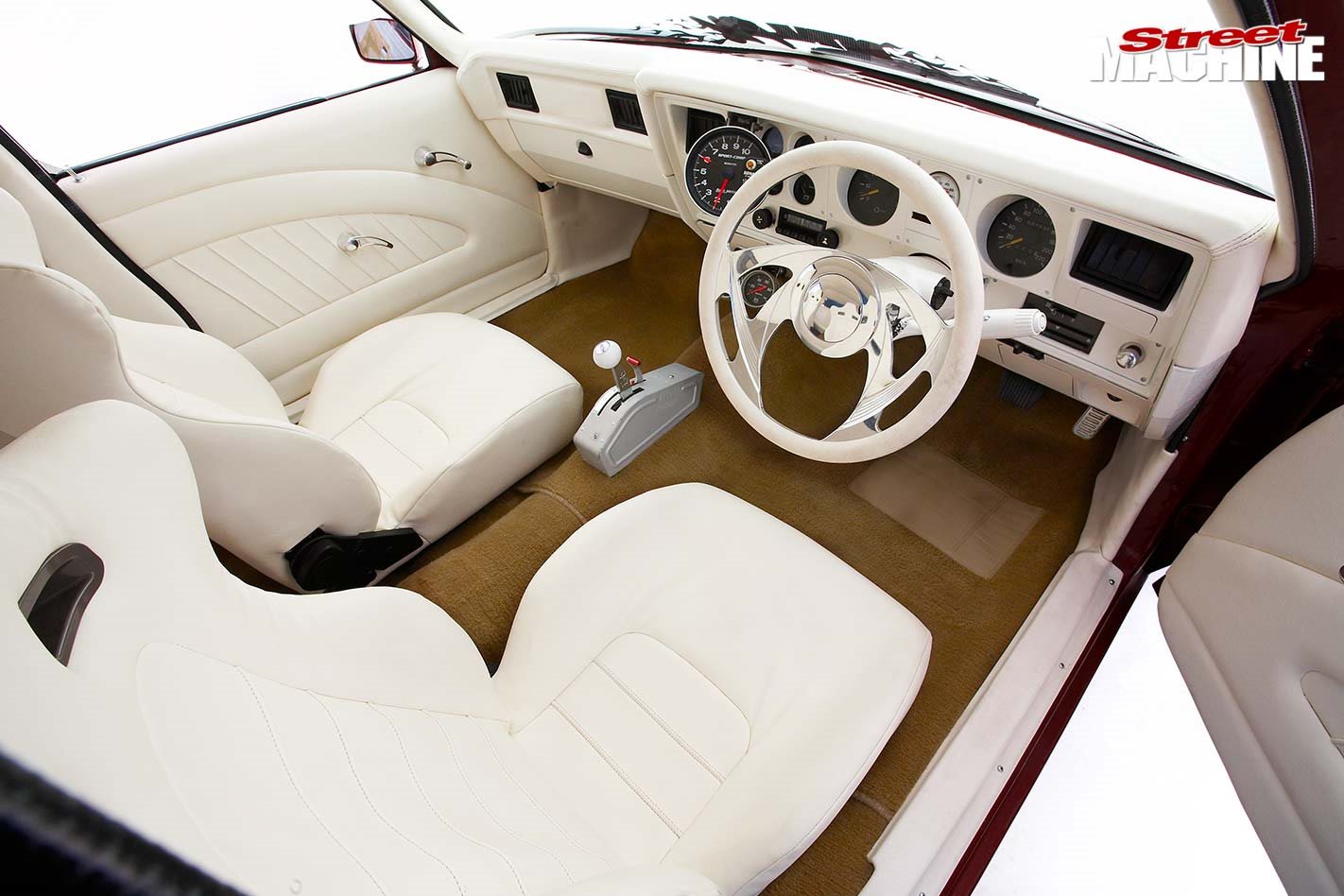 Once the shell was rolling again it was off to Nick at N&V Panel and Paint for fresh paint.

Of course the interior has been redone as well; there’s no scorched vinyl here any more. Gavin at Gas Autotrim modified the rear seat to fit the new wheel tubs and then re-covered it and the new SAAS front seats in white leather. The door trims were also tastefully retrimmed to a design thought up by Graham’s wife. Remember the girlfriend, and the engine-destroying burnout? Well Graham married the girl and now they have a daughter; ain’t love grand? 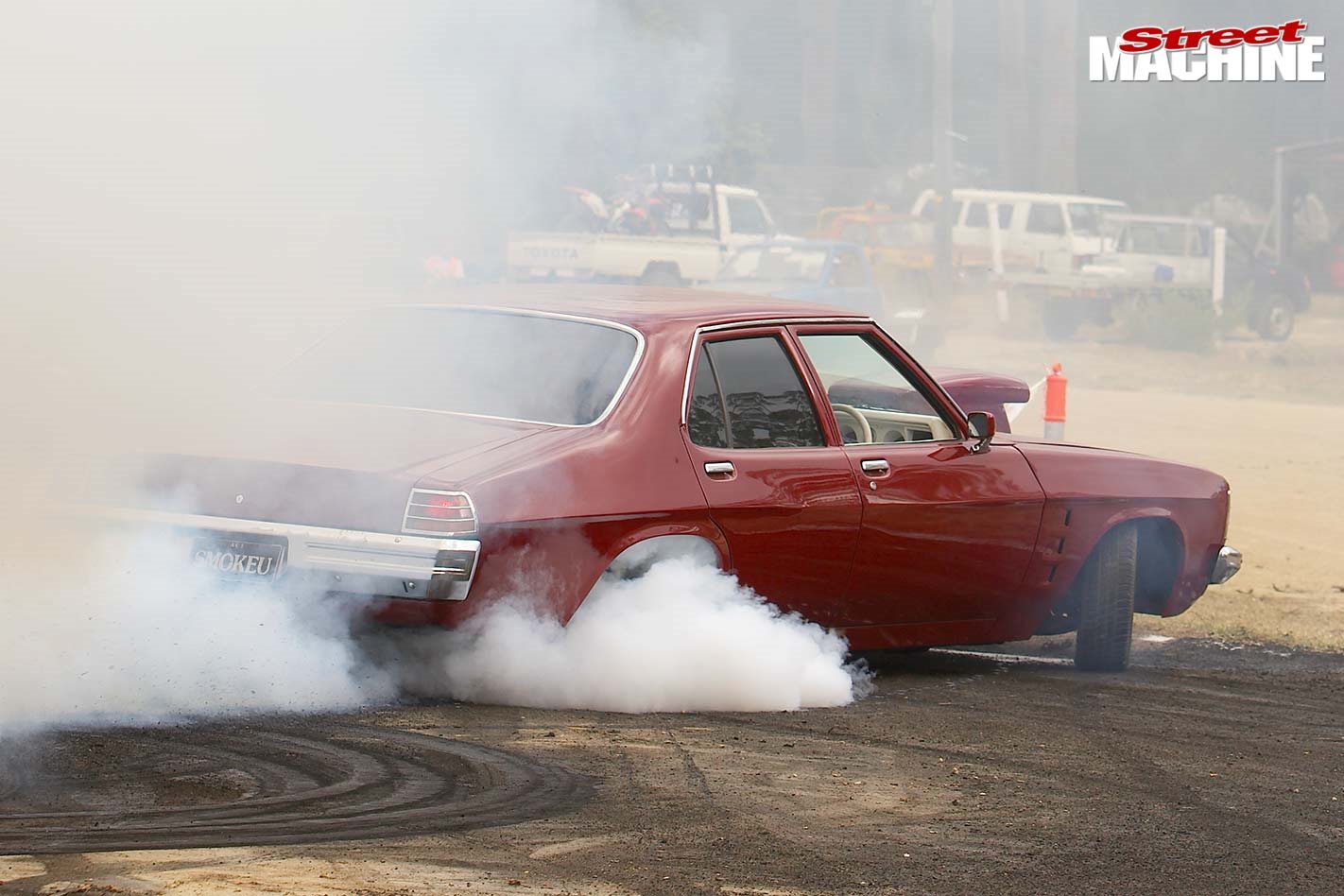 “We’ve decided for now that we’ll run it straight on pump fuel, just to get used to it,” Graham says.

Obviously the in-yer-face styling of the blower drive hanging half out of the bonnet means that the Prem will be cop-bait if it hits the streets, but he doesn’t mind.

“I don’t really drive it on the street. I’ll just take it to shows and have a good time where I can’t get into trouble.”

THANKS
Rod’s Performance for time & effort; AJ at CNM Steelworks; Gavin at GAS Autotrim; Bob & Ruth at ACT Diff Doctor; Detail FX; Nick at N&V Panel and Paint; all the boys at Fitzpatrick Speedworks; Wally at Kaleen Auto Electric; Wayne at Kaleen Automotive; Glen at Roadway Exhaust; Craig at Dynotune Belconnen; and a big thanks to my wife Shannon and my daughter Iesha for their support