Shane Dale can't remember how to turn on the CD in his Holden HZ Sandman. He's too busy listening to the big-block roar

THE problem didn’t occur to Shane Dale until it was too late. One moment his trophy-hauling 308-powered resto Sandman ruled the Dale roost, the next it was relegated to the proverbial doghouse. Y’see, wife Carly had finally put her foot down. She wanted a car, so agreements were made, they worked hard and, before Shane knew it, Carly’s shiny Holden Calais had wrestled pride of place in the shed. If think Shane’s problem was that the Dales had succumbed to boring, pragmatic motoring, you’d be wrong. Carly’s VL, with its worked 308, ran 12s. The pano could muster 15-flat at best.

“I had to have a faster car than her VL,” Shane says.

So he went on a mission. And three years later, his Sandmonster is complete: a classically styled Sandman with an industrial-strength 502ci big-block for power. It’s the kind of muscle-van that pano lovers wish Holden would’ve made in the first place. 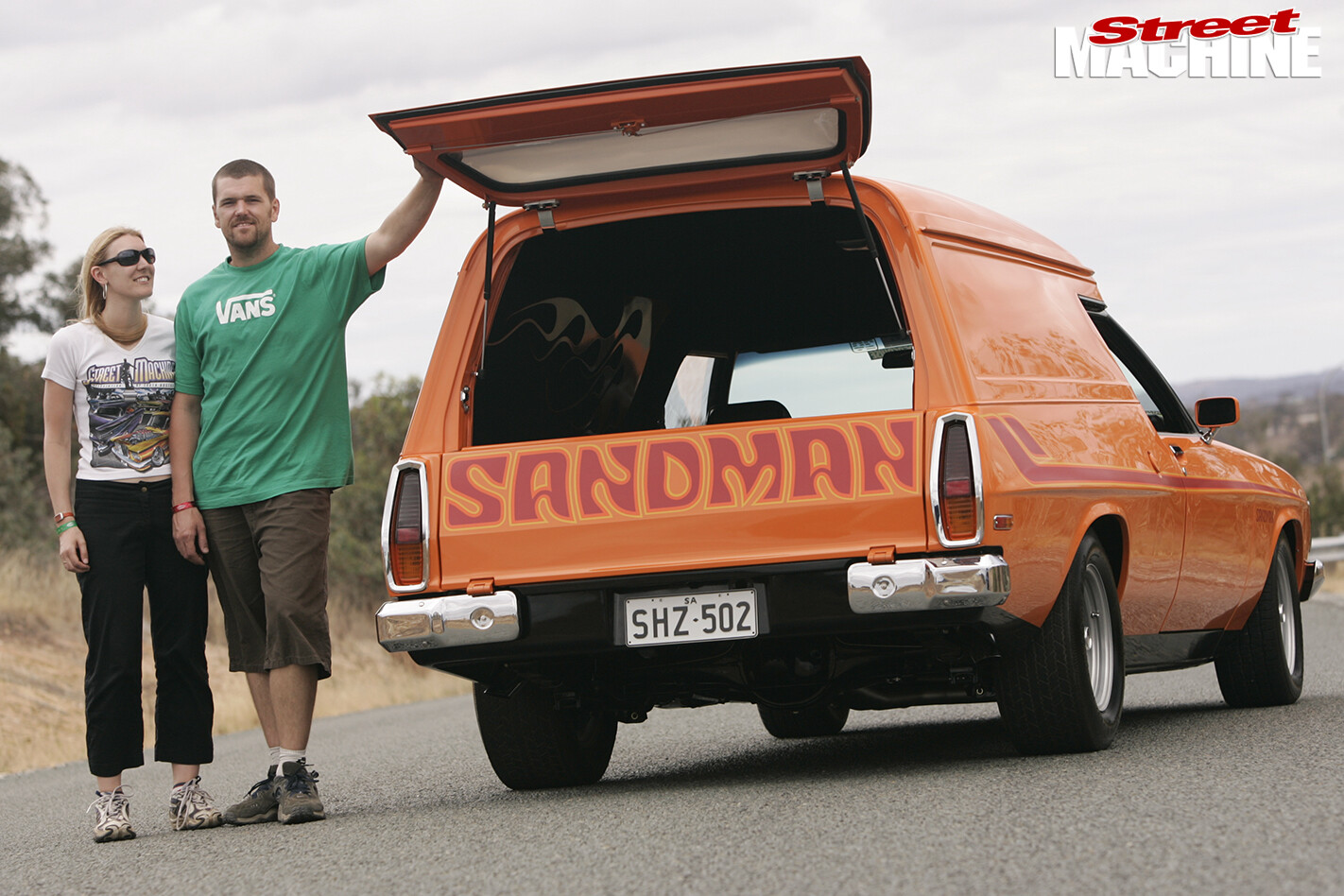 Now you might expect dinner table bragging rights and driveway dominance to force a wedge between Shane and Carly but nothing’s further from the truth.

“I couldn’t have completed this build without my wife’s equal love of cars,” Shane explains.

Yes, they have ‘His’ and ‘Hers’ rides but they worked side-by-side on each others’ projects, and against the common evil.

“Every time we relied on someone else — a business — they let us down by charging too much, taking too long, or just bullshitting,” Shane says. “I waited a year to book the shell in to get chassis work done and eventually told ’em to stick it. I ended up doing it myself — and completed it in two weeks!” He reckons the only two areas he and Carly didn’t do were the engine internals and gearbox. Everything else came together in the Dale shed.

Shane originally found the dented and rusting 253-powered rat-house in the back of a panel shop but he had it fit and healthy by Summernats 17. Which was where he became inspired to go the big-block route.

“We’d put months into the body. I spent a lot of time on the difficult feature-line and literally sanded until my fingers bled. One time, Carly was helping to knock dents out of the lower quarter panels. She had to squeeze her arm into the internal panel gap in the rear quarter to grip the dolly so I could hammer the panel into shape. It was a bit of an act of flexibility and very uncomfortable! We got there in the end, battle scars and all.” 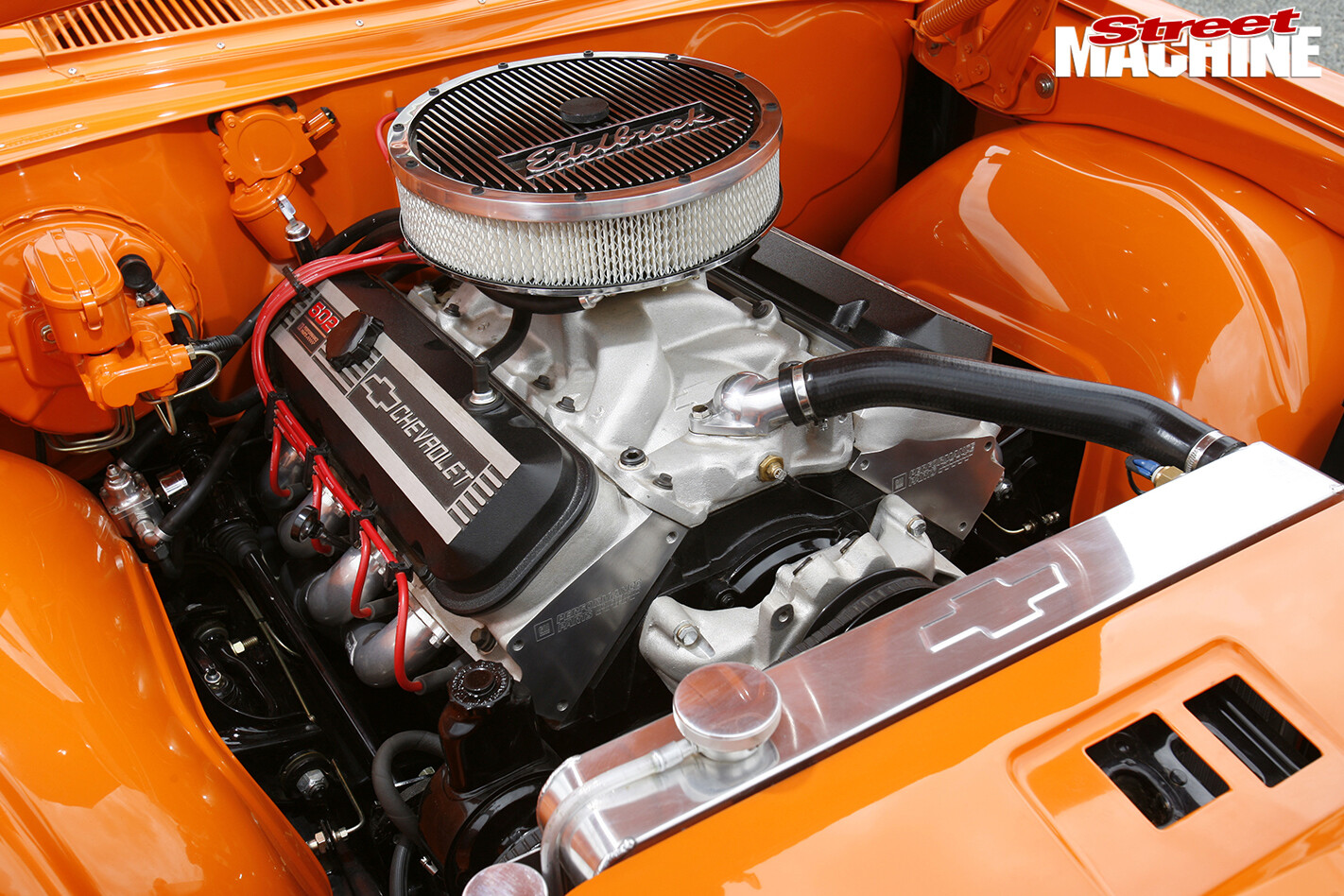 Getting there meant the full bare-metal, body-off-chassis treatment, with every nut, bolt and washer replaced.

Shane decided to go with a crate engine but he’d heard a few unhappy rumours so, after taking delivery, he sent the 502 GM Performance donk to Max and Darren at Adelaide Engine Developments for a teardown, check-up and rebuild. It now sports a forged steel crank and conrods, with forged slugs in the bottom end. Heads are large oval-port aluminium jobbies with big 2.25in intake and 1.88in exhaust stainless steel valves and a big hydraulic cam. Up top is Holley 850 Double Pumper. 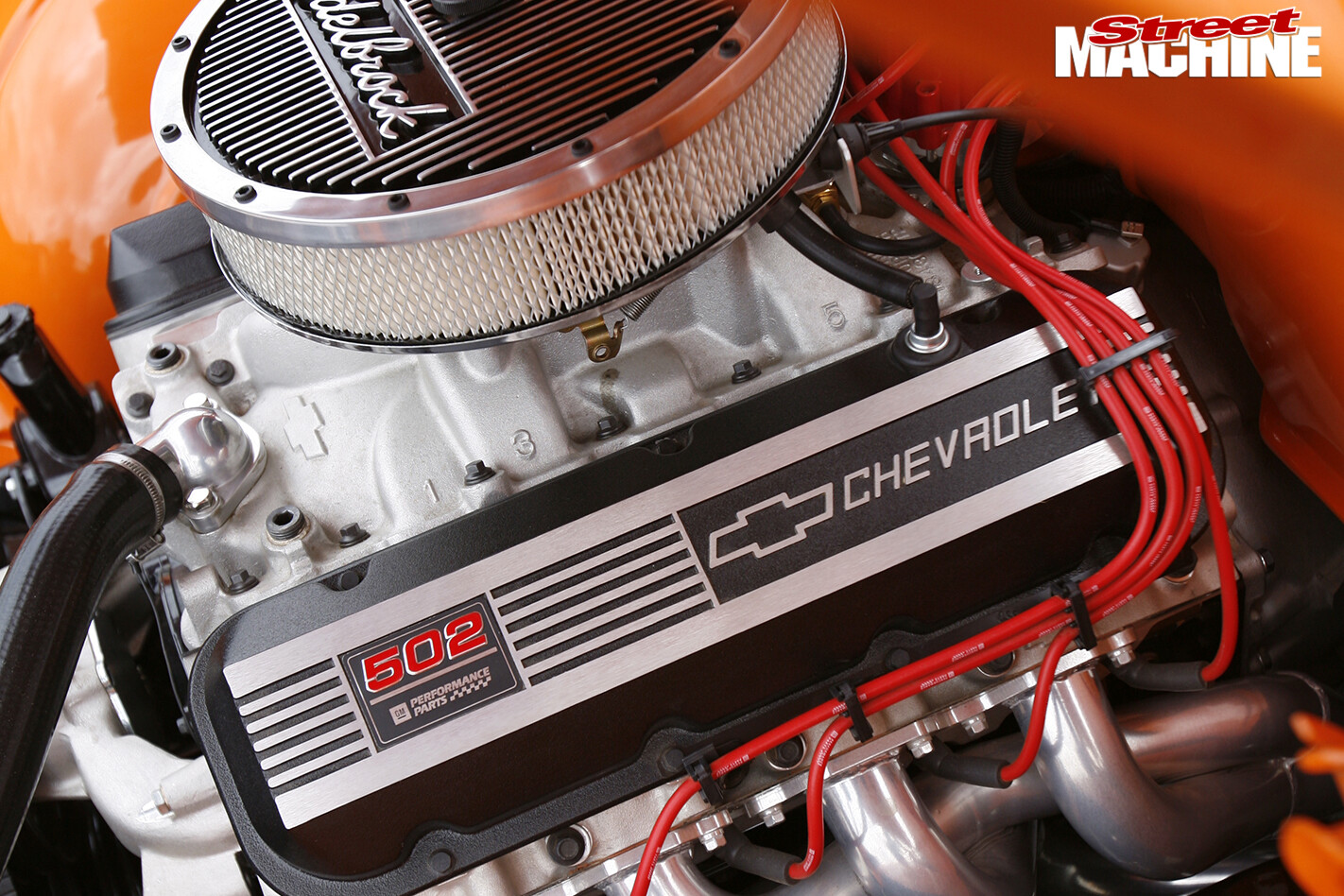 Fuel injection? “Not in this lifetime,” Shane says.

GM claims 502 horses but this one’s a little shy, teaming 487hp at 5300rpm with 570ft-lb of torque at 3000rpm, on 98RON premium. Perhaps the exhaust — 2.5inch Tri-Y Pacemakers and 20-inch Lukey Turbo Mufflers — robbed it of a few extra neddies but it’s ADR compliant. It also allowed clean fitment of the engine that required lots of towels, bubble wrap and cursing.

“We’ve heard a few people say: ‘The 502 fits in there nicely’,” Shane says. “Little do they know! Many things had to be custom made.” No kidding. For strengthening, Shane whipped up 70x50x3mm sub-frame connectors, which mandated fabricated mounting hardware. Then there’s the reinforced engine crossmember and suspension mounts, kidney plates, solid aluminium body-mounts, and a shortened and boxed gearbox crossmember to suit the toughened T400 slushbox. Even the bonnet was hand-fabricated from steel.

“We’d prefer not to have a scoop at all but it was required for rego. The 502 just won’t fit under the normal bonnet.” “I wanted to keep it styled from its original era as if it rolled off the factory floor,” Shane says.

The interior also looks stock. Seating features the original GTS buckets retrimmed in vinyl, something the owner bravely tackled himself. 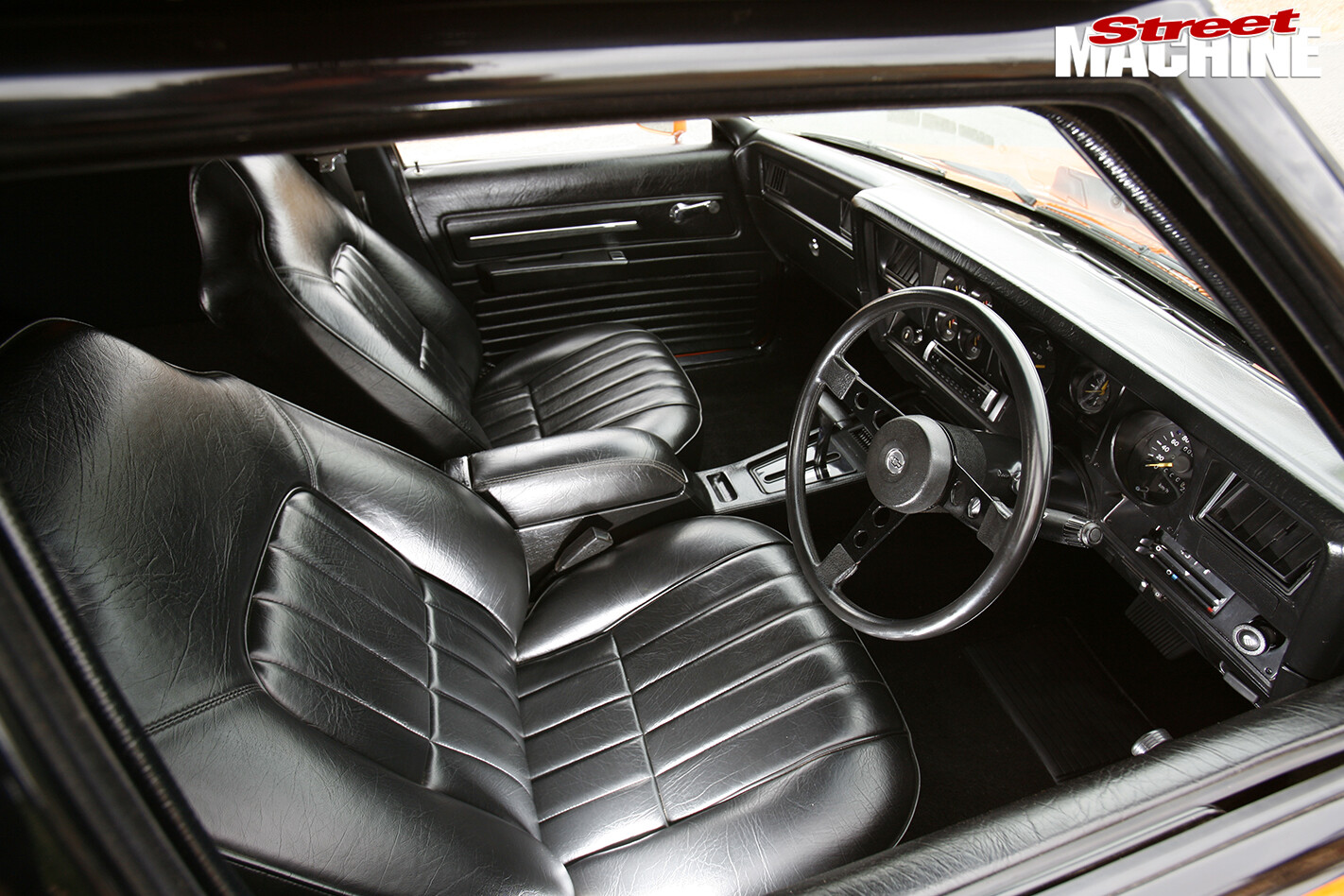 “We could’ve done leather but I left it original with new-old-stock parts.”

The power steering system was retained while an electric demister was hidden under the dash. Shane added a CD player, for looks more than anything.

“I turned it on once to make sure it worked. During the Summernats 20 Supercruise, it occurred to me that I didn’t even know how to turn it on any more,” Shane laughs.

“Panel vans interiors vary so much,” he says. “I wanted a simpler look.” The flames inside the rear were airbrushed to colour-match with the Sandman decals outside. Shane also stuck with old-school acrylic lacquer outside rather than two-pack, in the original Valencia Orange.

Shane reckons many get fooled into thinking it’s purely a restoration but van enthusiasts check right through the Sandman, picking up on details such as the trick fuel system, the notched tank and smoother inner guards.

You’d reckon a Top 60 Elite Hall spot and a strong Grand Champion showing at Canberra this year was ample reward for the Dales’ hard yakka but Shane’s not satisfied. There’s still the matter of the war-lines drawn on the Dale driveway. Once a bit of trophy hunting is out of the way, the Sandmonster will hit the drag strip in anger, with a certain VL Calais in its crosshairs.