With all the mods nicely hidden away, this blown LS1-powered Sandman ute is a genuine sleeper

AT FIRST glance you might think that this is just a tidy Sandman ute with a big set of wheels but it’s much, much more than that. It’s the first car created by Mark’s Workshop as part of its Signature Series concept. According to proprietor Mark Else: “We wanted to produce a classic high-end muscle car with all the drive qualities of a late-model supercar.” 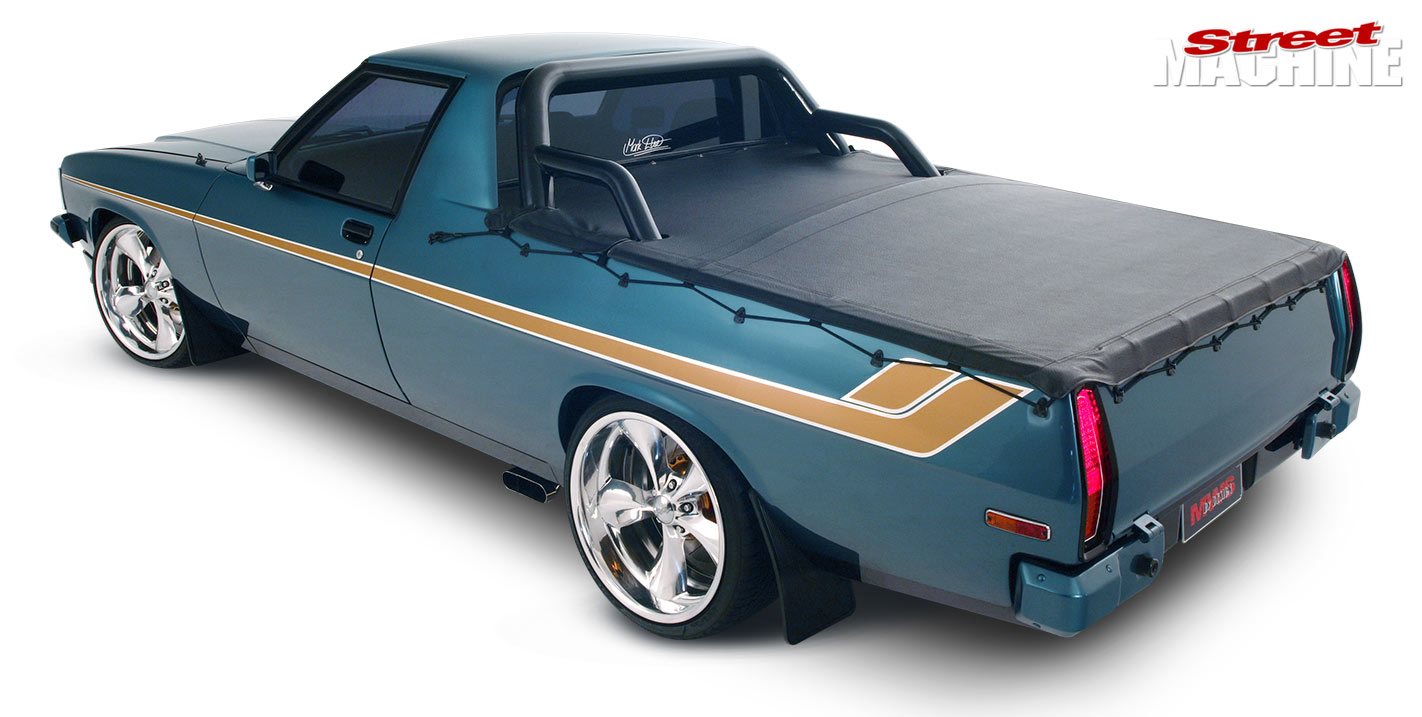 When Mark talks about qualities, he doesn’t just mean a bunch of horsepower that will get you from A to B in record time but an overall package that includes suspension, brakes and even interior modifications as Mark reckons the driver needs to be balanced to get the best out of a car.

Of course there’s no shortage of horsepower either, as you’d expect if you’re aware of MWS’s impressive supercharger installations. The shop’s website lists more than 100 supercharged cars that have been through the workshop and that’s only half of the total! Not bad considering it’s located in York, a small country town about an hour out of Perth. 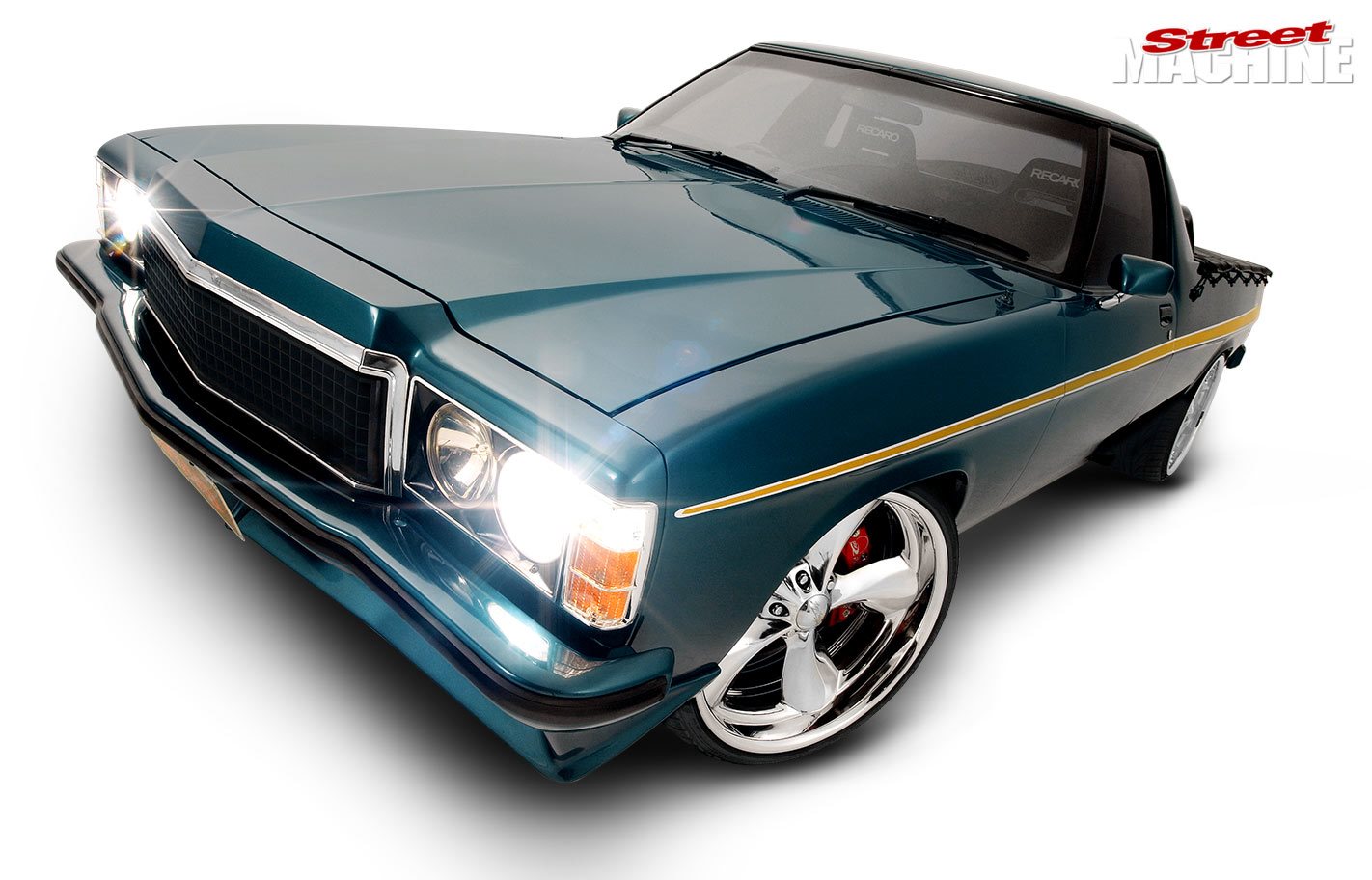 You may wonder why anyone would go to all this trouble, turning a Sandman ute into a supercar. Mark agrees it’s not the ideal starting point: “With this car I’m trying to hook people into the passion of the concept and as I didn’t have a million bucks to spend on the project, I used what I had.”

What he happened to have for the past 20 years or so was this HZ Sandman ute. It’s gone through various incarnations over the years — not surprising for a guy who does this for a living — and used to prowl the streets with a Whipple-blown VN Group A 5.0-litre under the hood. 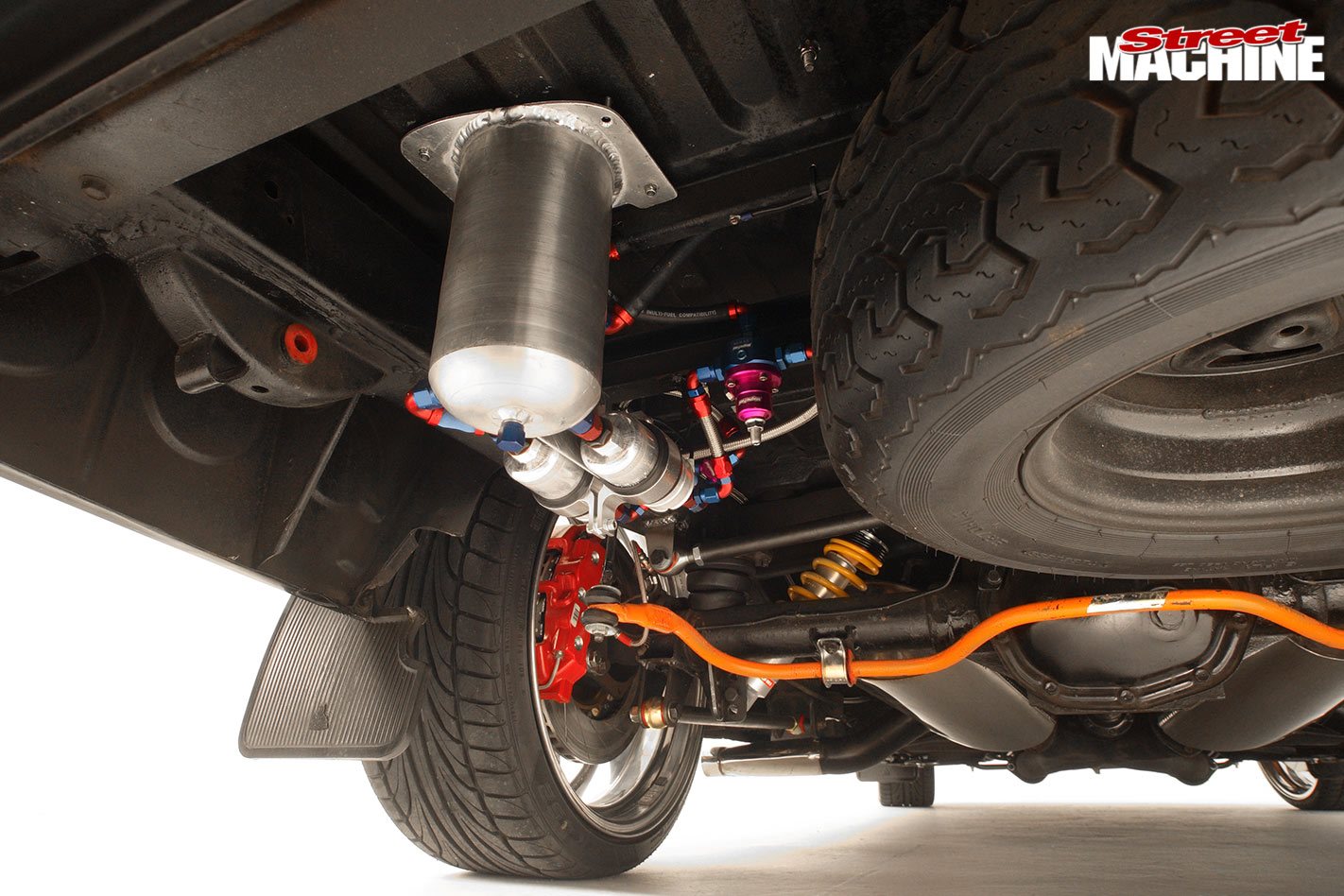 Apart from a set of gold Simmons wheels it looked much the same as it does now, sporting the same Caribbean Turquoise paint with custom Sandman stripes — Mark customised the signature splash to his own taste, modifying the shape slightly and using a gold/chrome colour combination that wasn’t available from the factory.

With more than 600hp on tap, there was absolutely nothing wrong with the old set-up but Mark was pretty keen to show his skills with the latest technology when it came to blown pushrod V8s. 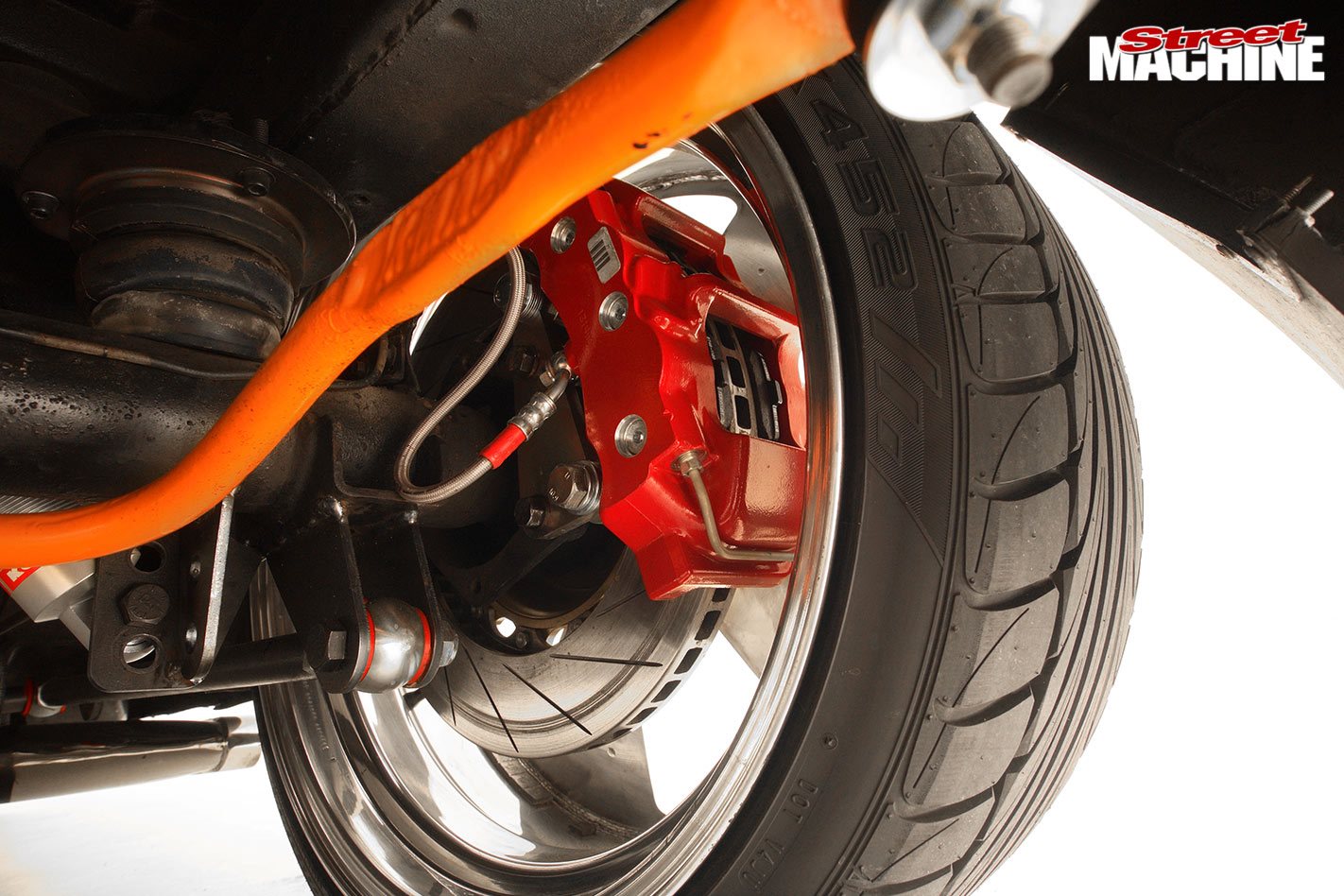 “These were beautiful cars for the 70s,” Mark says, “but they don’t cut it in the 21st century. These days you have to make the car as environmentally friendly as the newest part of the car, and that’s simply impossible without EFI.”

When it comes to getting mega-grunt out of a pushrod V8, it’s pretty hard to go past the LS1. As a lot you will know, they’re pretty strong performers right out of the box but when you let the experts loose on one, things get really interesting.

Watch next: Sandman name lives on 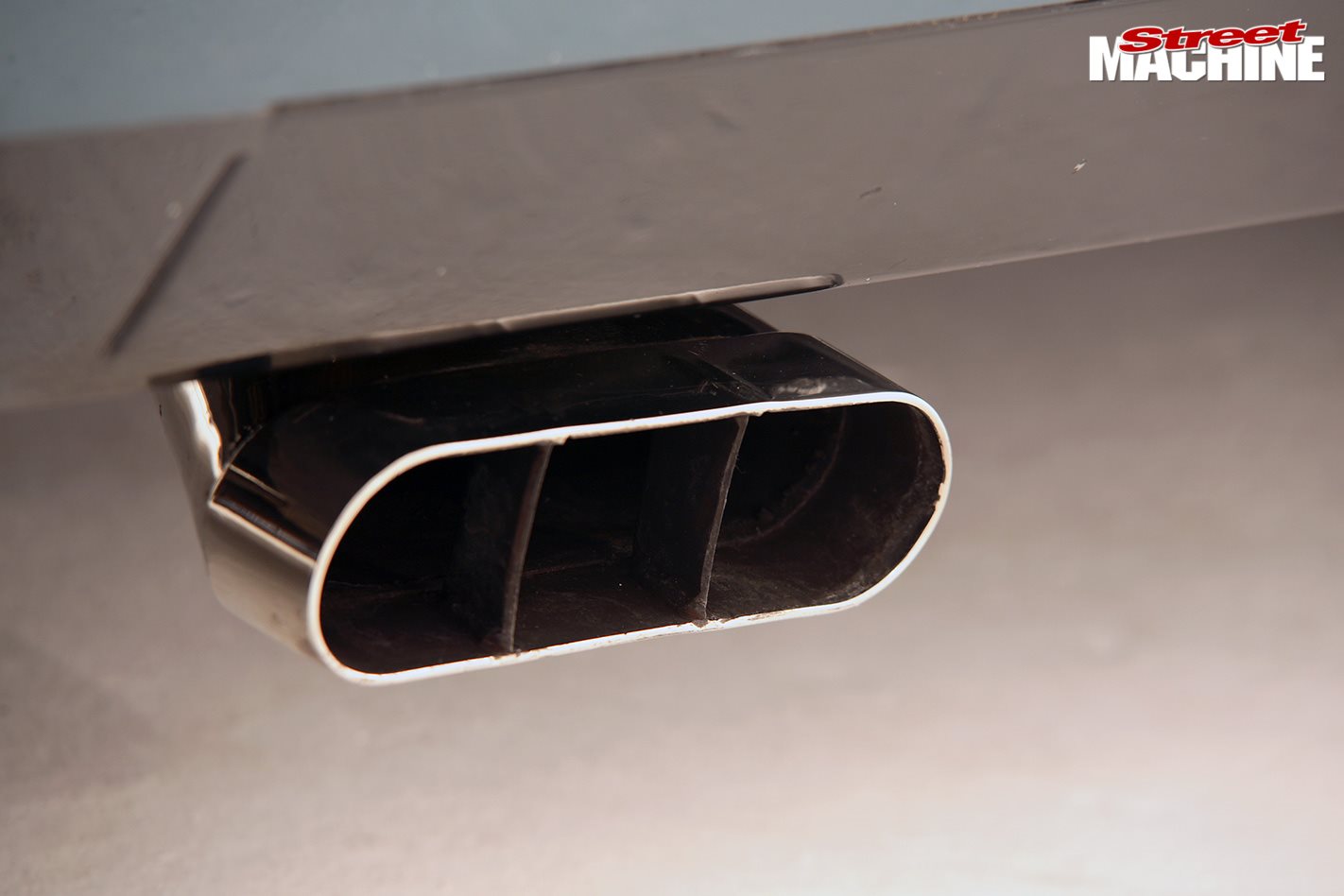 We all know there’s no replacement for displacement, so the stock crank got flicked in favour of a Callies four-inch stroker. This bumps the capacity up to 383 cubes and is a solid base to swing the Scat rods and forged Ross pistons from.

The heads were ported by John at Street Quick Performance and are more than capable of handling the extra juices from the match-flowed 62lb Siemens injectors and Vortech T-trim blower. Discreetly hidden behind the grille is a custom-designed intercooler that has been hidden with black paint — hooray! This is pretty much the theme for the rest of the engine bay. 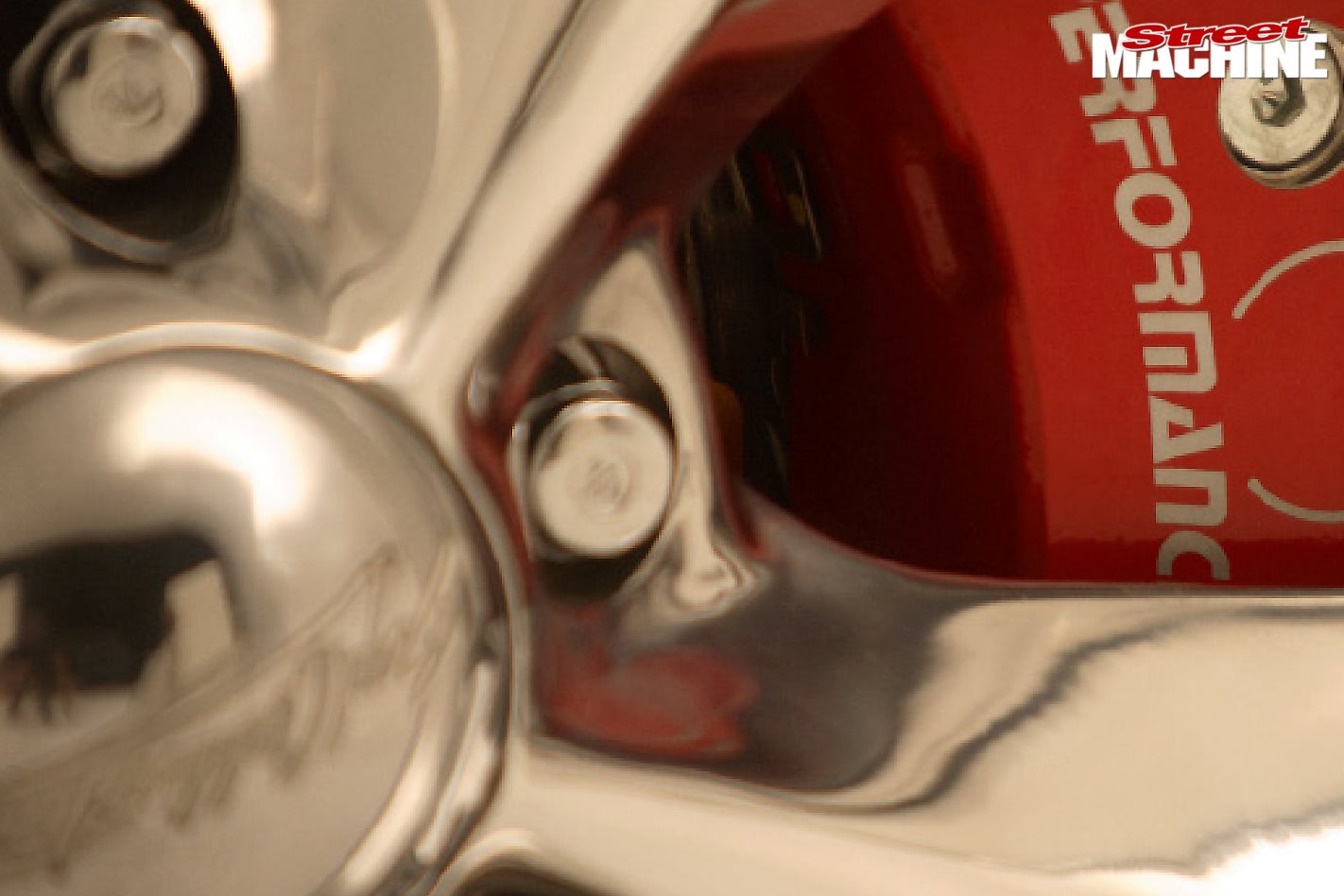 When I spotted the ute at Motorvation 21, it was the stealthy look of the all-black engine bay that drew me in. Initially, I didn’t even notice the blower or the plumbing as they share the low-key satin black finish. Although photographers hate it, I really like the overall effect, especially the way the coil-packs almost disappear against the black inner fenders. Some things you just can’t make look good, so you’ve got to hide them. 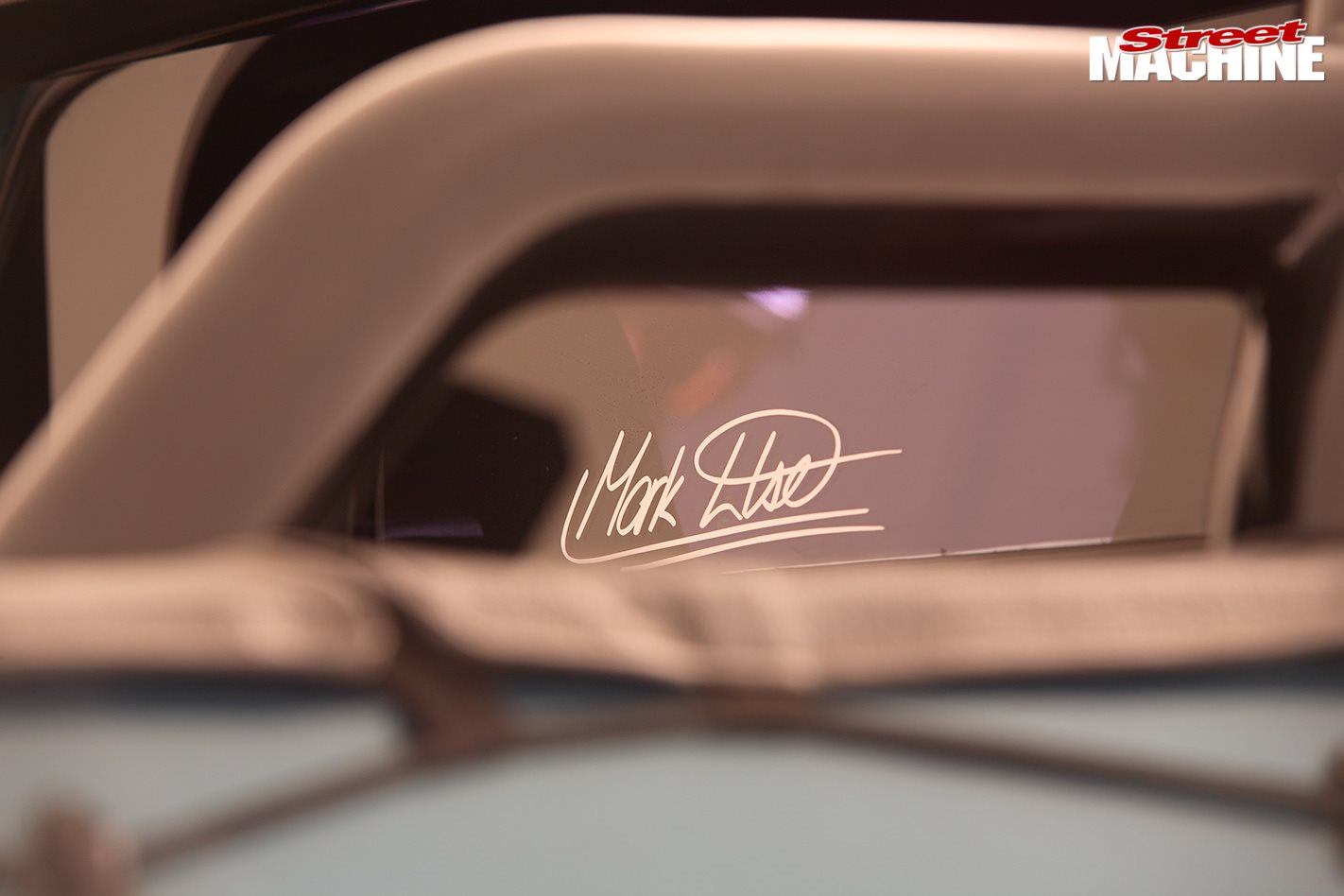 Apart from a splash of blue and some unpolished alloy it’s all business, and that’s exactly how Marks likes it.

“It was made to be purposeful — that’s why it’s low on the bling.” 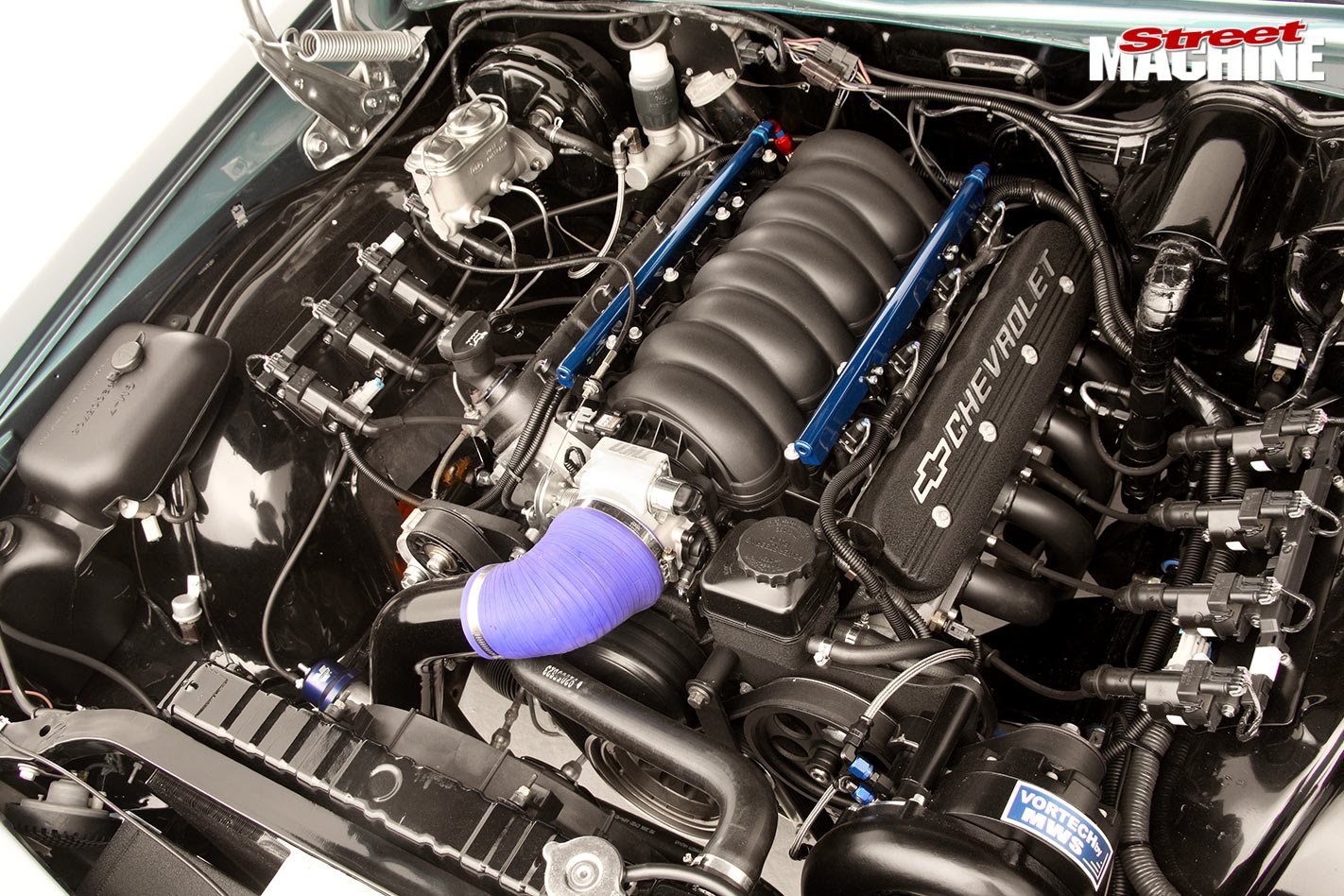 A set of 1.75in headers make their way out to a twin three-inch system and a set of custom mufflers that pump the gases out in front of the rear wheel — just like the Group C days. That’s not the only bit on the underside that got the race car touch either. There’s a two-piece V8 Supercar-spec tailshaft by Berryman Engineering and a four-pin Salisbury diff running 4.44 gears. That might not sound too trick but it’s what you do with it that counts. 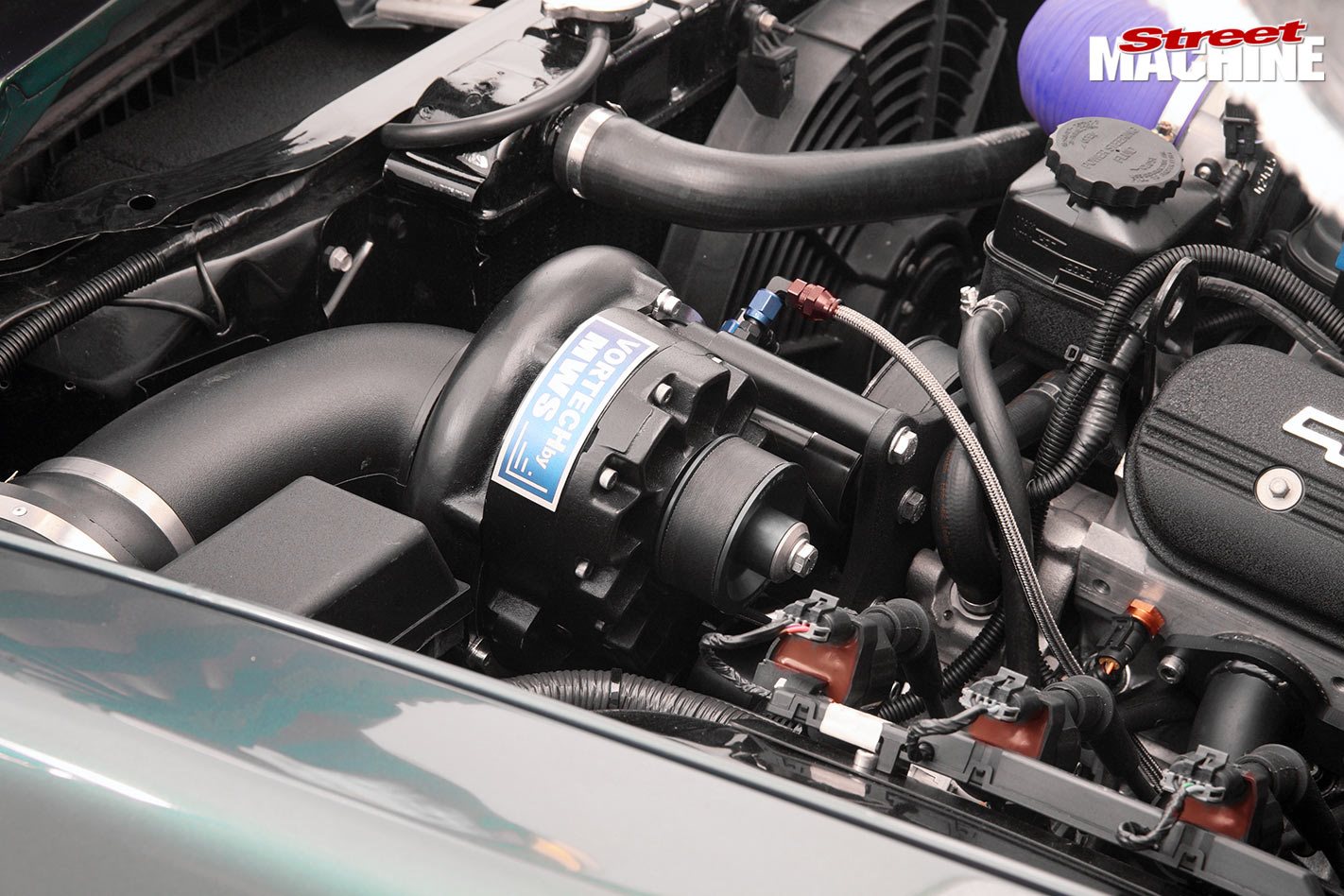 Located by a custom-fabricated four-link and Panhard bar, and hanging from Koni coil-overs, it behaves much better than the factory leaf springs. The final piece of the driveline puzzle is a T56 ’box. With this much grunt — 845hp at the flywheel — you need the strength of the modern six-cogger.

Getting that amount of power isn’t as simple as slapping a blower on your LS1 and driving off. To get the most out of the combination, MWS worked with Daniel from Chipmaster to fine tune the factory Delphi ECU. Not only does the motor make the numbers, it also meets emission requirements. 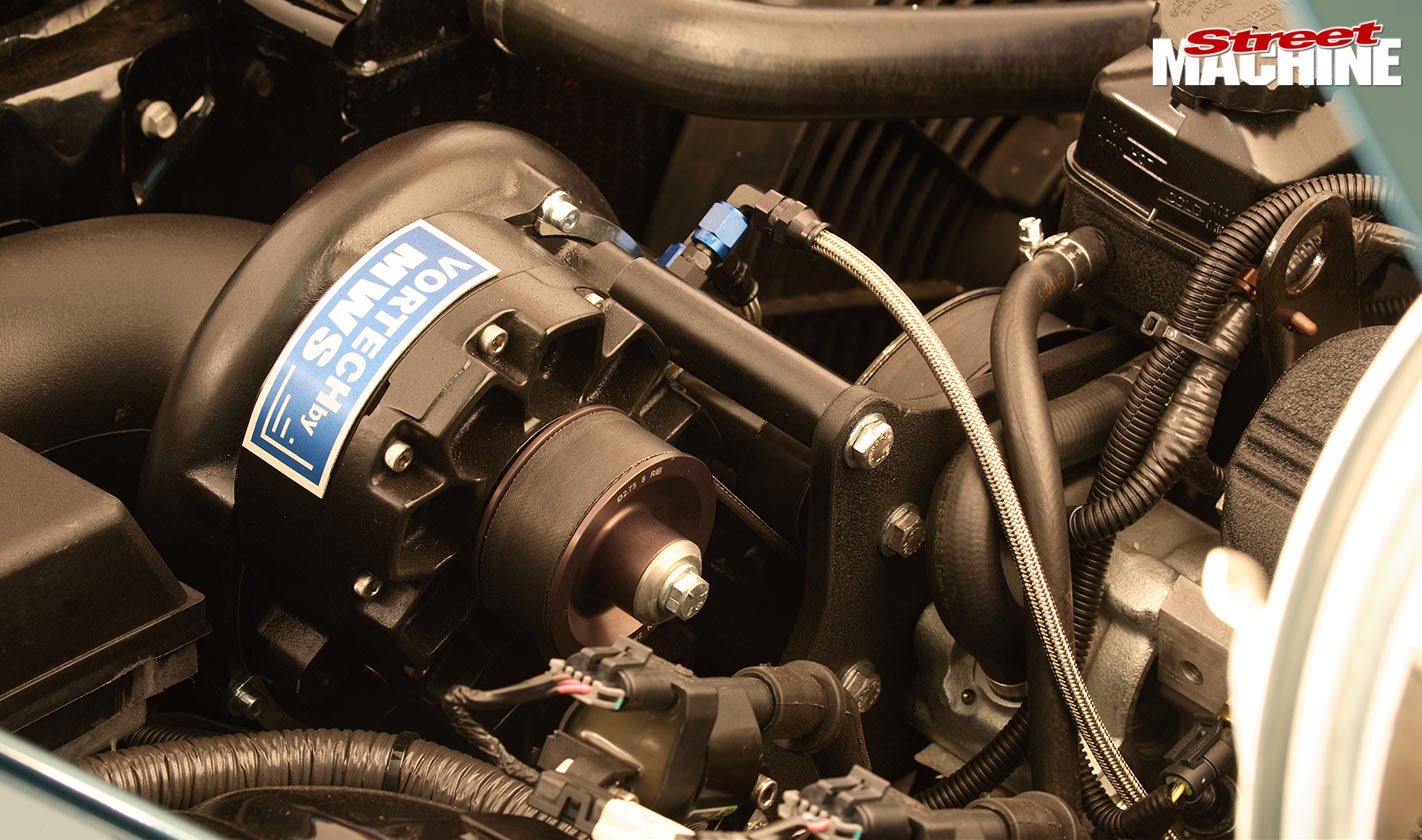 The interior follows the same no-nonsense theme as the rest of the car: “It’s only got a boost gauge in it now,” Mark says. “I used to have a monster tacho but I got rid of it. The HZ GTS has to be the best dash ever created — a brand new GTS dash doesn’t look as good!”

The only apparent additions are a pair of SR Recaro seats and a Momo Corsa steering wheel; the rest has a new covering of black leather that looks like it’s just left the factory. 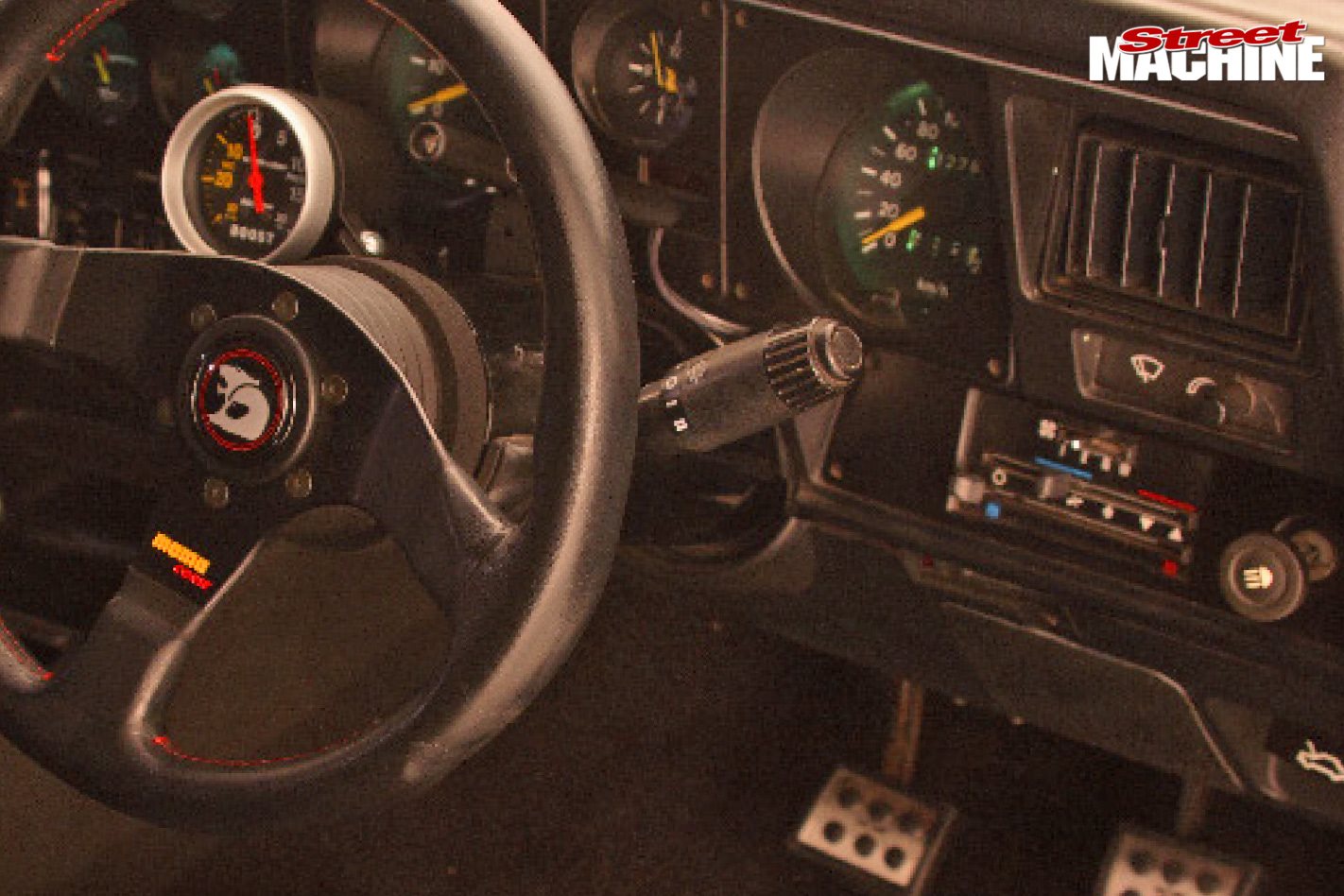 The Simmons rims are long gone — in their place is a set of rather large Boyd Coddington Junk Yard Dogs. Measuring 20x8.5 and 20x10, they’re wrapped in 235/35 and 285/30 rubber. They’re not just for show either: peeping out from behind the polished spokes are PBR 355mm rotors all around, clamped by six and four-spot PBR Performance calipers. Just like a modern supercar, this old ute not only goes but stops too!

MARK’S SANDMAN has seen some neat engine bay combinations over the years. The first was a basic 308 with a set of Speed Pro forgies and a Crane 276 cam that gave 30,000km service, even with the occasional shot of nitrous. “Then I spent a lot of money on some cylinder heads,” says Mark. “I retained the standard bottom end, four-bolted it and added a roller cam, for 451hp on the engine dyno.” 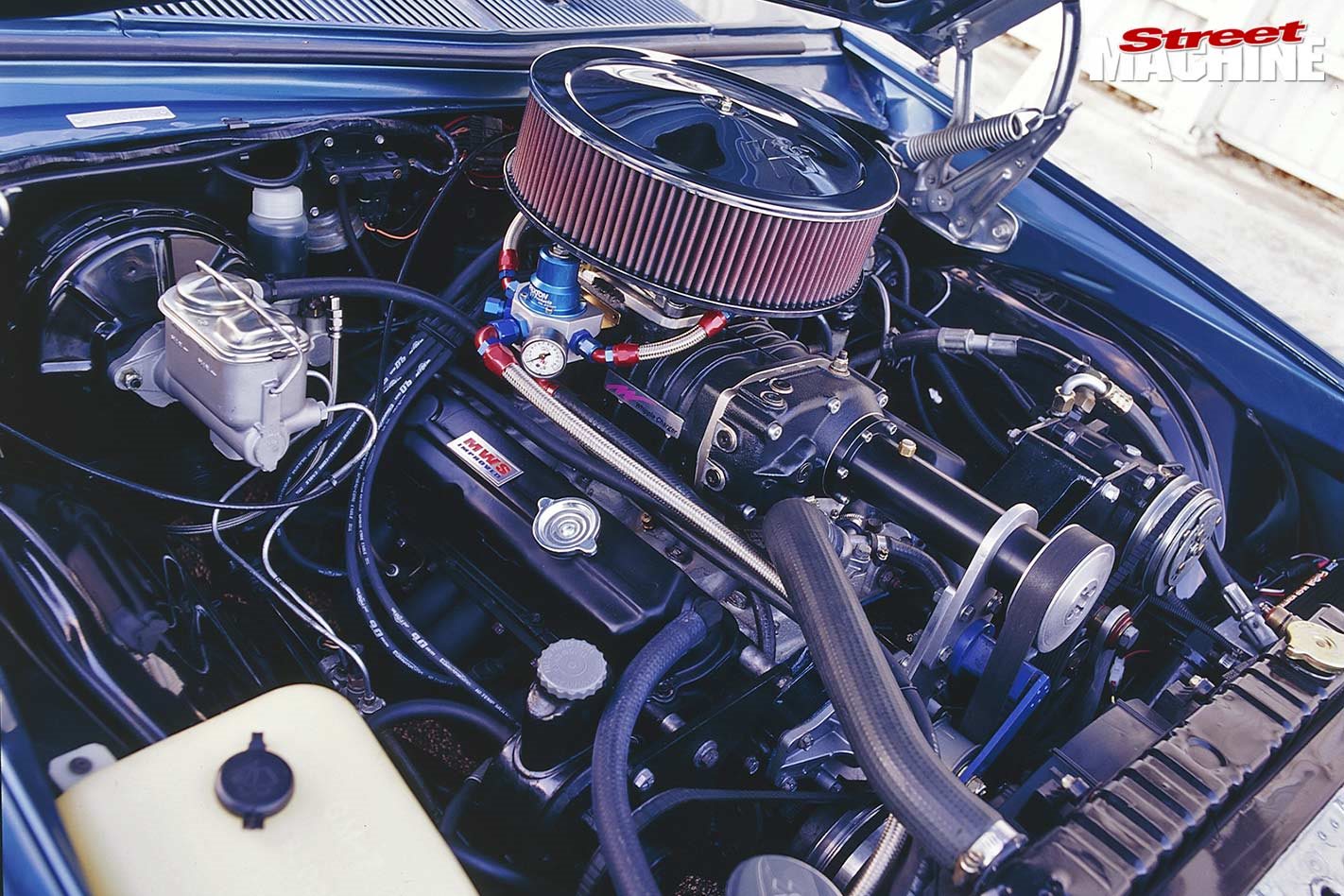 He then added a Whipple 2100R supercharger. “I bolted it on with a 775 Gold Claw carby and started to make some power! It was all good — but then it rattled and died,” not surprising as the Whipple was pushing 17psi into a static compression ratio of 11:1.

“It concertinaed four rods, blew one out and split the block. It was definitely a learning process. That was 10 years ago when blower development was just beginning and I wanted to find the limits.”

The next step was a VN Group A four-bolt block with Yella Terra rods and Speed Pro forged pistons for a more sensible 9.3:1 compression. The heads were early HQ pattern with the biggest valves that Mick at Flow Tested Cylinder Heads could stuff into them. The Whipple 2100R shoebox blower, 17psi pulley and Gold Claw carb was then bolted back on top. The result? 630rwhp on avgas. Fun 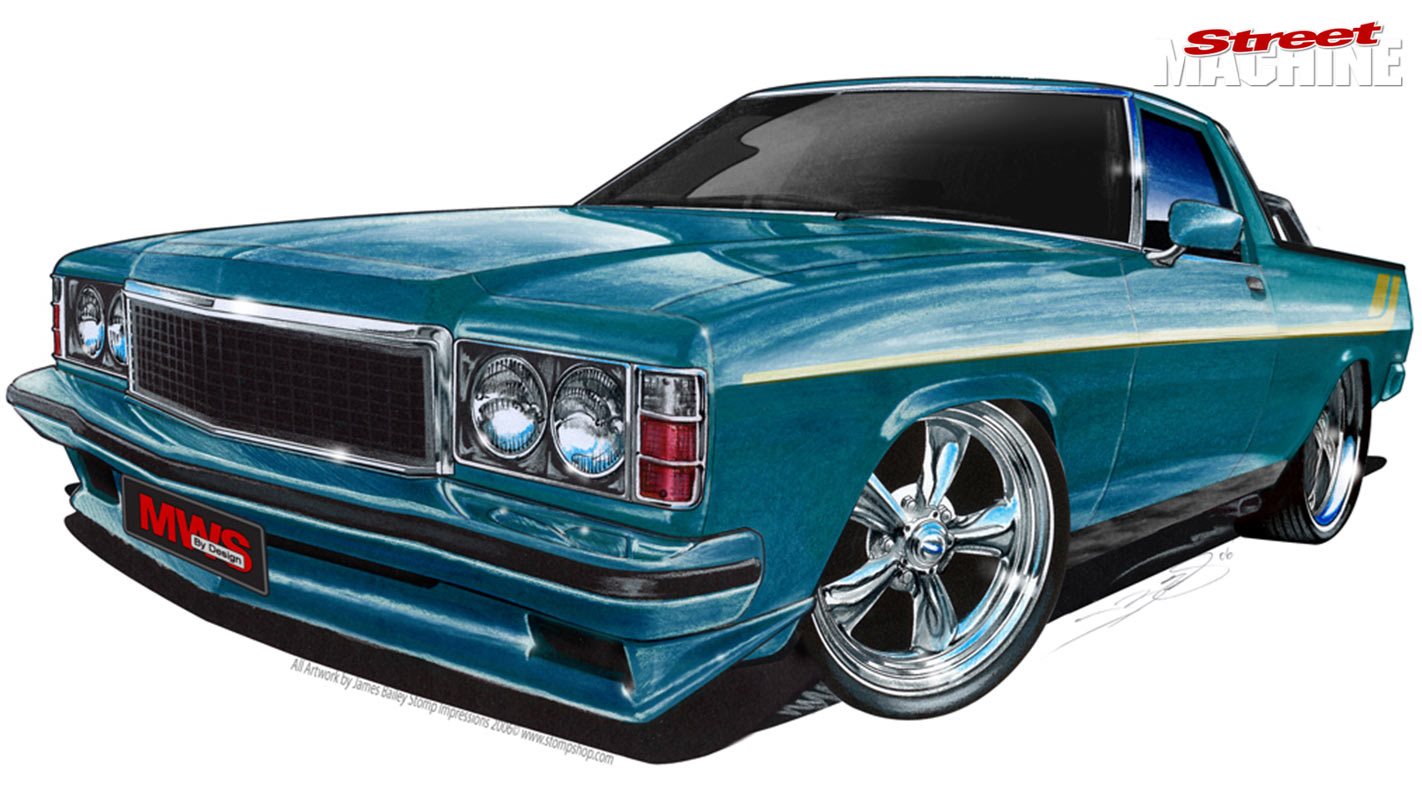 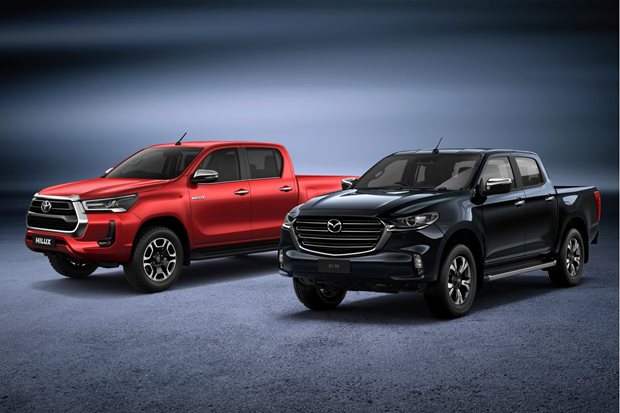