A FEW years back we started hearing rumours about this crazy Torana that was getting built to do everything.

‘What do you mean, everything?’ we asked. Burnouts, drags, show ’n’ shine – everything! 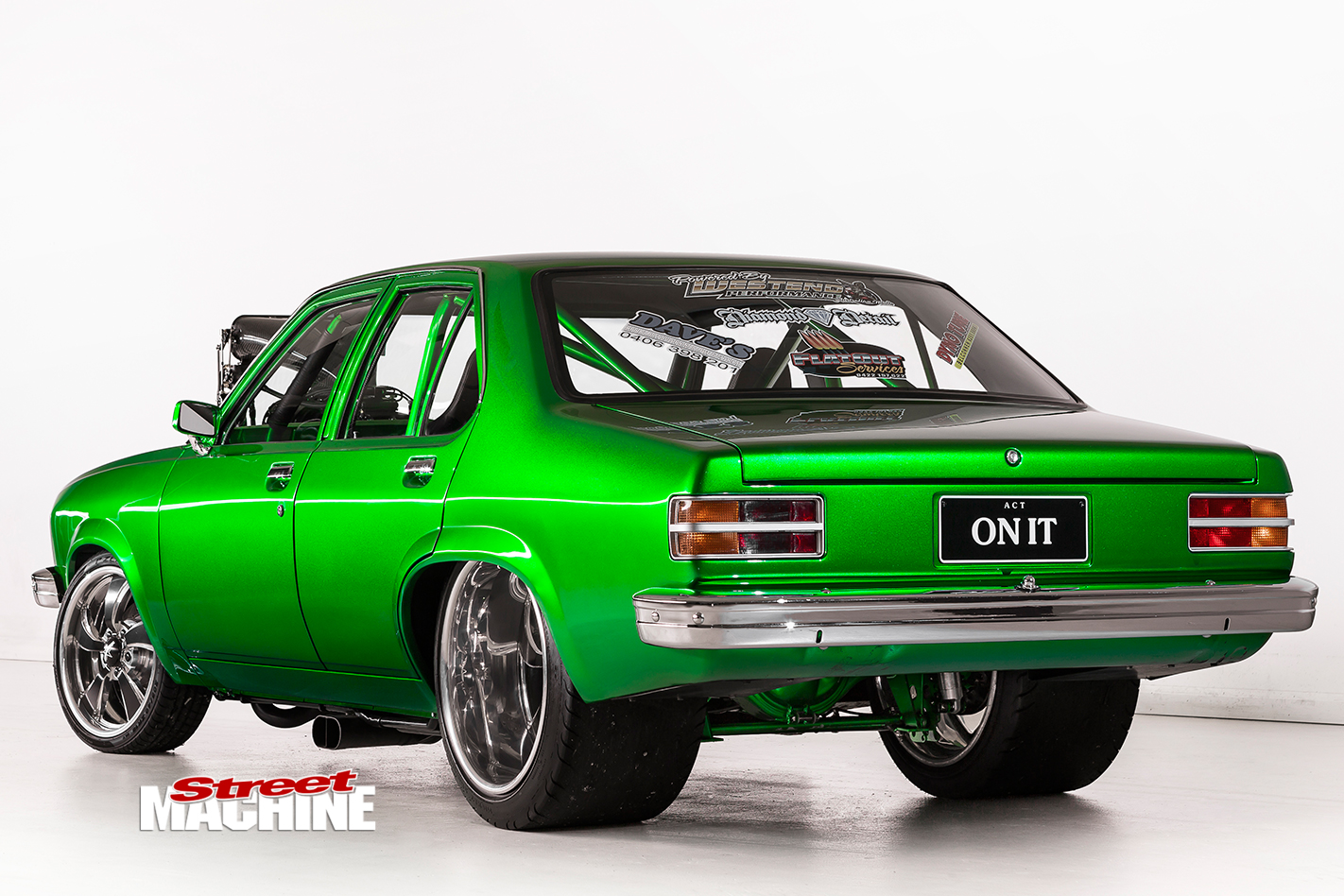 At the time we thought: ‘There’s no way.’ Oh sure, you can build a car that will do all of that, but it won’t do anything particularly well. Well, this LH Torana, built by good mates Mark Siracusa and Matt Cowan, proves us wrong.

The covers came off this glorious green machine at Summernats 28, and even then no one could quite believe that Matt and Mark were planning to burn rubber in such an awesome beast. Even though it debuted in the big hall, the car was judged for Tuff Street, where it scored Best Pro Tuff and Tuff Street Champion. The boys came back to Summernats this year and cleaned up Tuff Street again. To use the Xbox nomenclature, we’ll call that Achievement Unlocked! 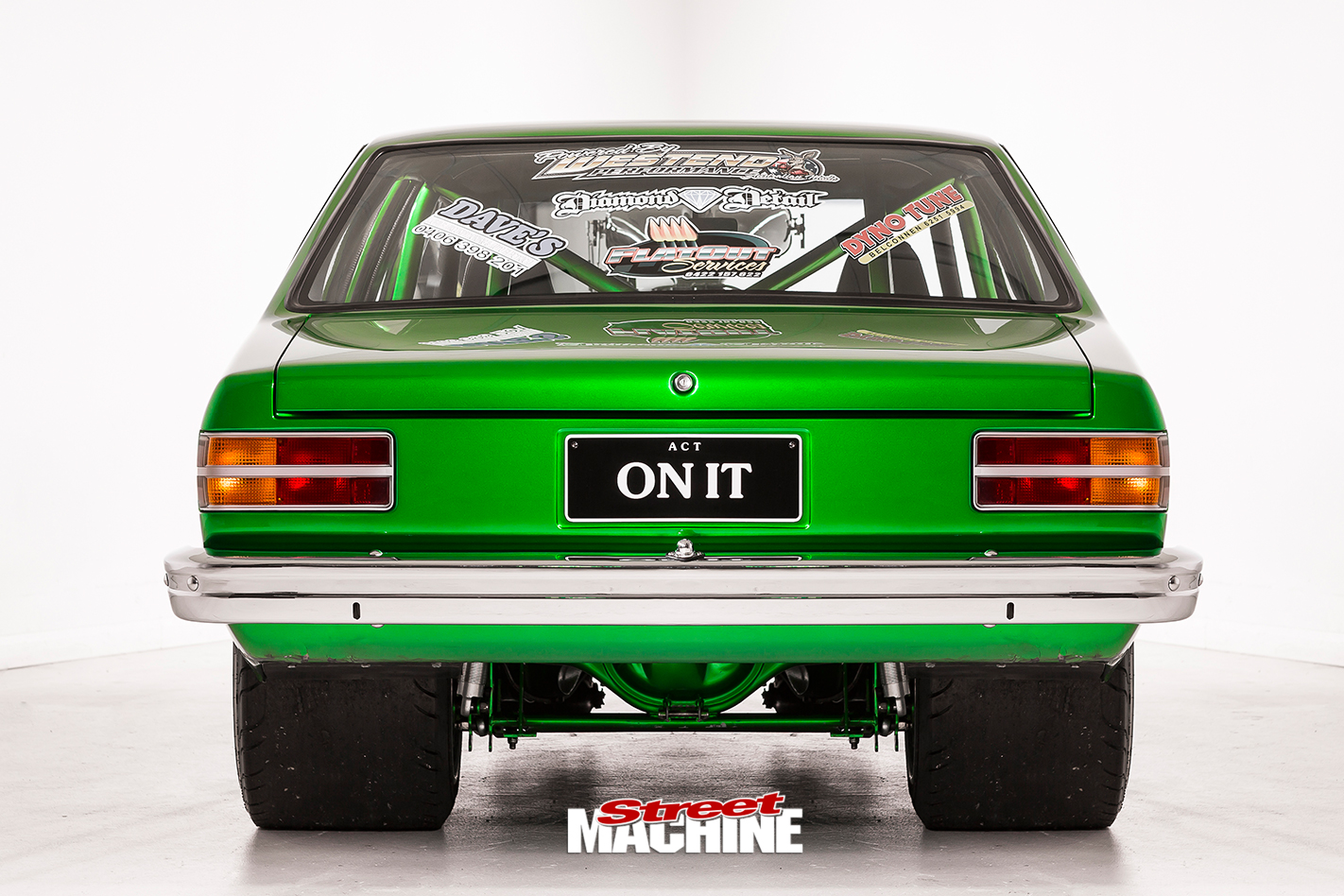 The car made its burnout debut at Bathurst Autofest in 2015, where the guys had to deal with a few teething problems. “The carbonfibre rocker covers flexed too much and didn’t seal properly, so some oil got on the pipes and caused a small fire,” Mark says.

A switch to billet alloy units at Brashernats in Sydney saw the problem solved and both guys had a crack behind the wheel, and if there’s one thing this car does better than anything, it is frying tyres. 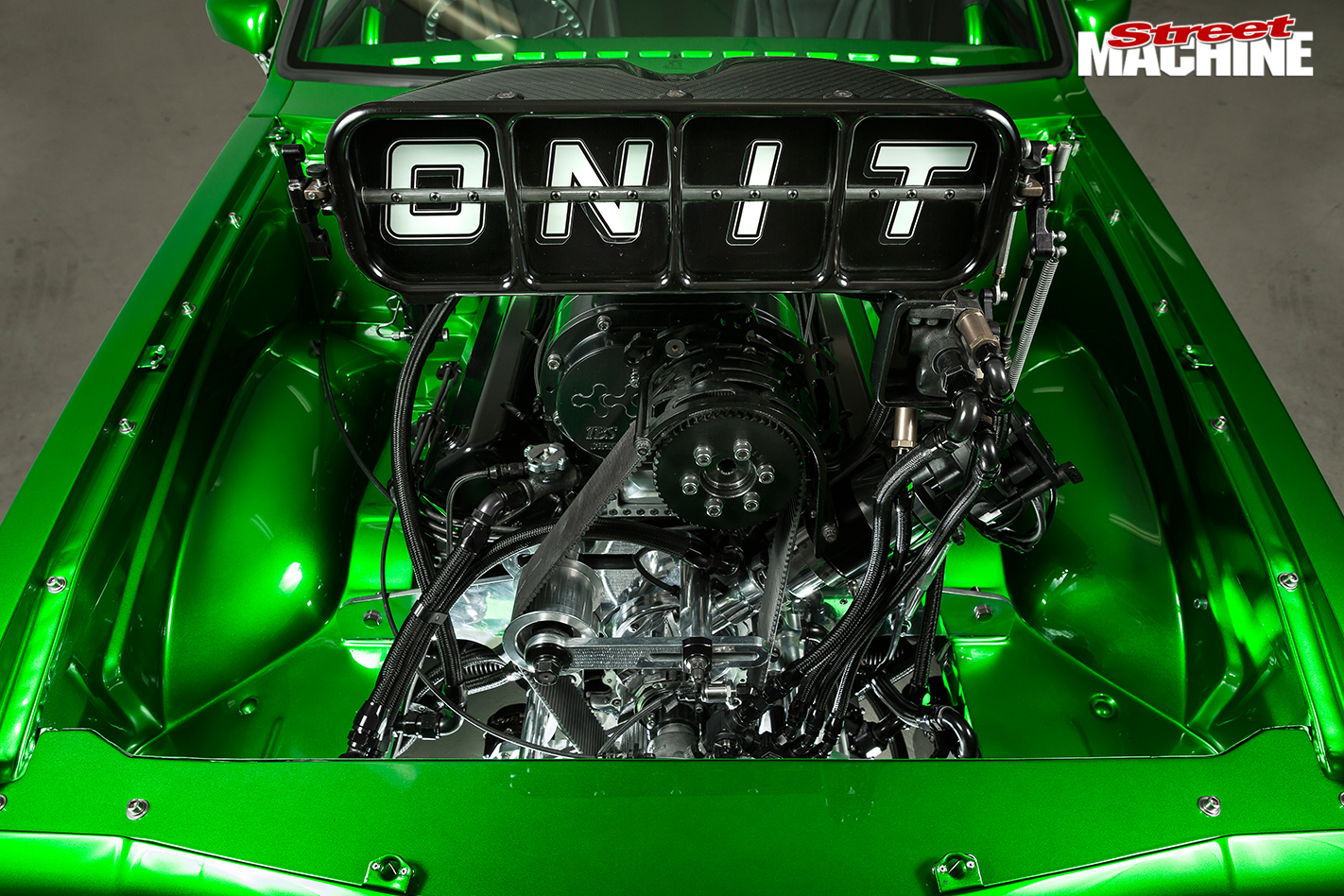 At Summernats 29 they both tried their hand at conquering the tight pad and the Torana came away without a single scar; we’d call that a win in itself. But the guys did even better than that; Mark scored fifth overall and Matt came away with second place, along with an invite to the Summernats 30 Burnout Masters. Achievement Two Unlocked!

“I’d never skidded on the Summernats pad before,” Matt says. “My qualifying and finals skids were the only times I’d driven on that pad, so I was pretty happy to come second in the finals.” 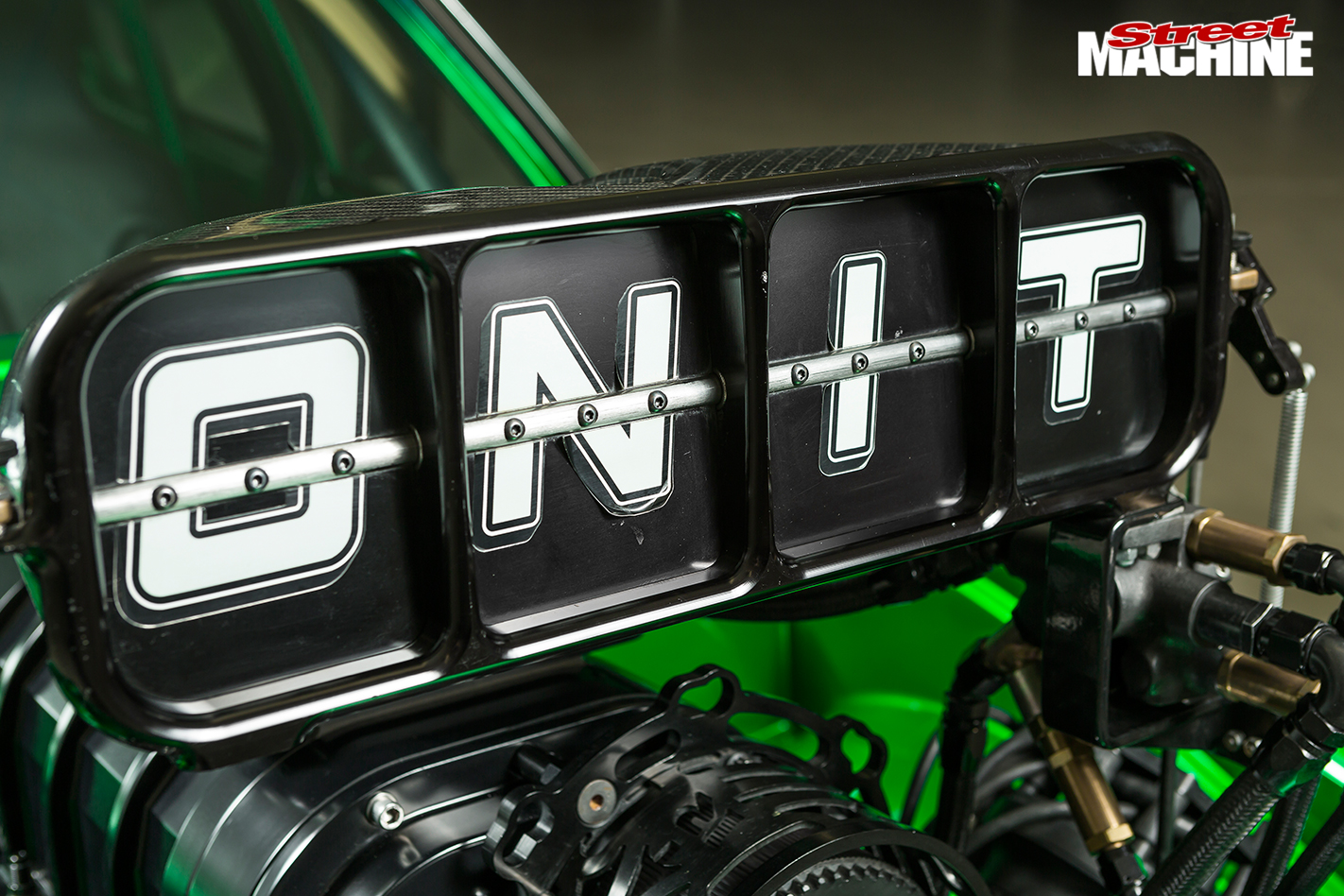 Mark and Matt have been great mates for over 20 years. “Matt used to be an auto electrician and I worked at the mechanics next door,” Mark says. Over the years their shared passion for cars has continued, despite the fact that neither work in the auto industry anymore. Mark’s got his own demolition and earthmoving business, while Matt has a concrete cutting and coring firm. 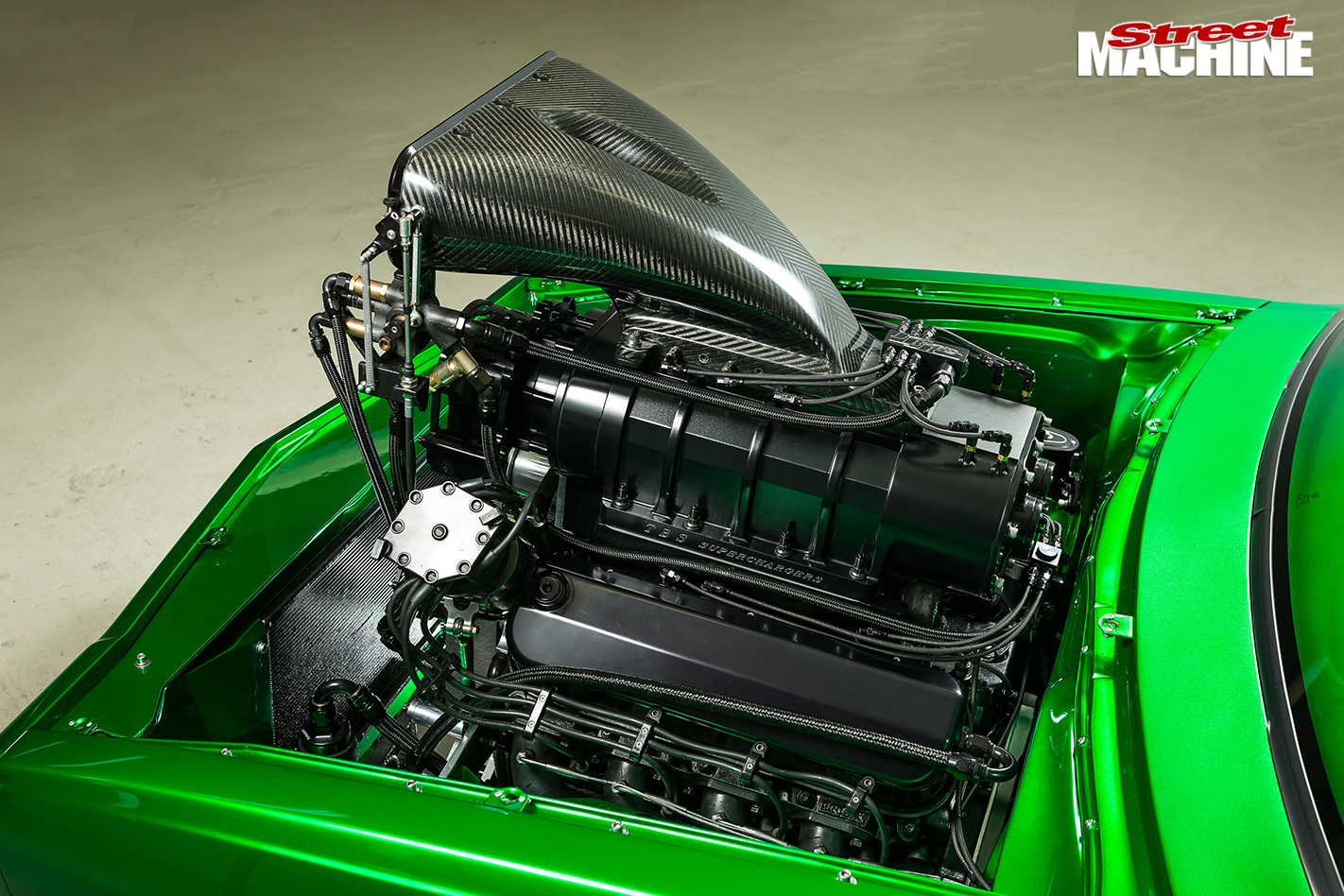 “The idea for this build started back in 2014,” Mark says. “We’ve got a piece of old highway on a block of land and we were having a bit of fun with Adrian Cuthbertson and SKIDMA, along with a few guys doing test skids. We were having so much fun we decided to build our own skid car.” 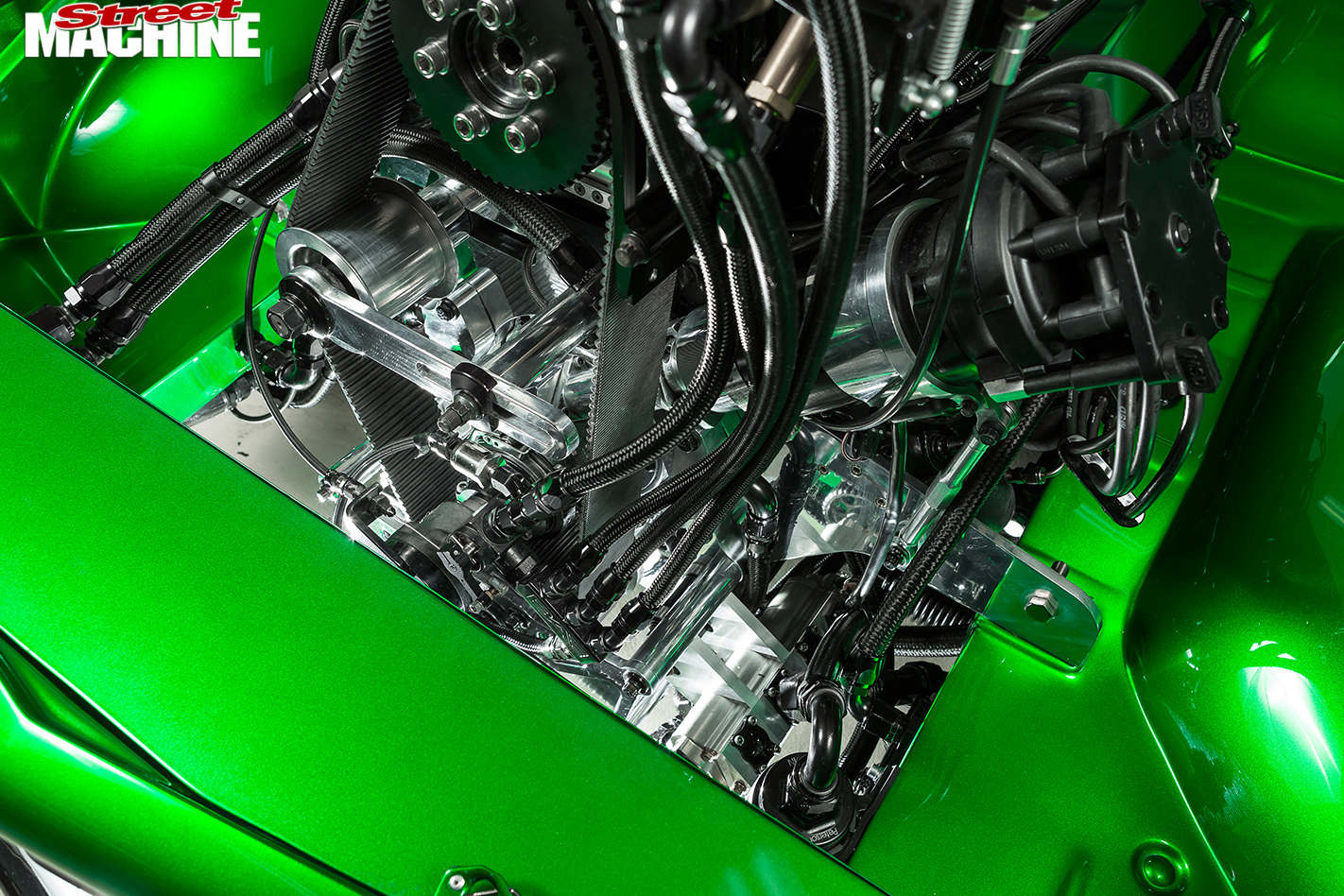 The idea was that the guys would go 50/50 on the costs and share the driving duties. “Two wallets are better than one and having a bigger budget helped,” Matt reckons.

They found a Torana in Melbourne to kick things off, and instead of buying a wreck that they would have to spend a small fortune rebuilding, they found a roller that was mostly built. 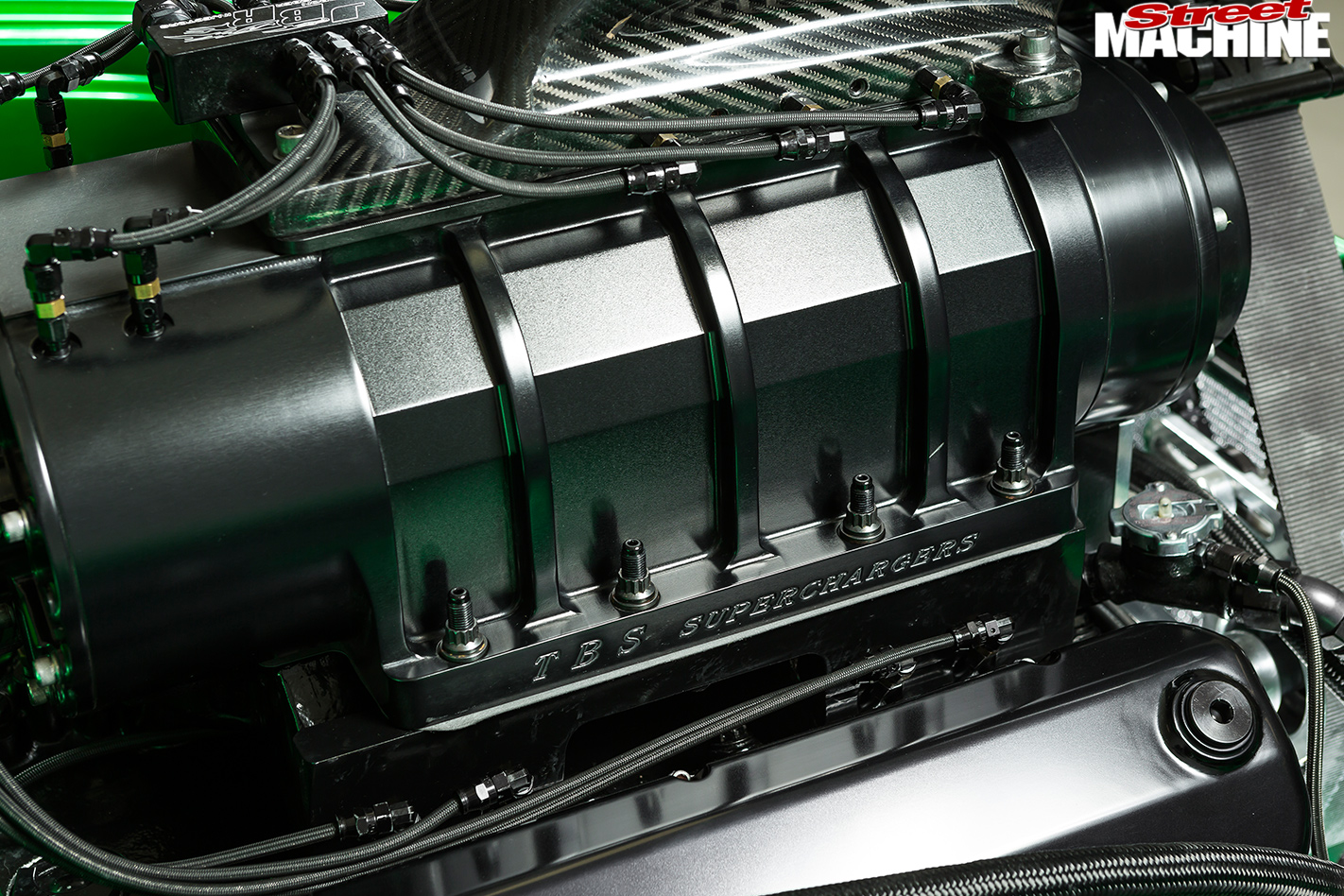 “The Torana was immaculate,” Mark says. “The bloke had finished the car, drove it once or twice and then parked it. It was green, with the ’cage and tubs, but we’ve changed just about everything since then. We bought it with no motor, no ’box; you could say the car was about 40 per cent and we’ve added 60 per cent, but that 60 per cent has made it a totally different car.” 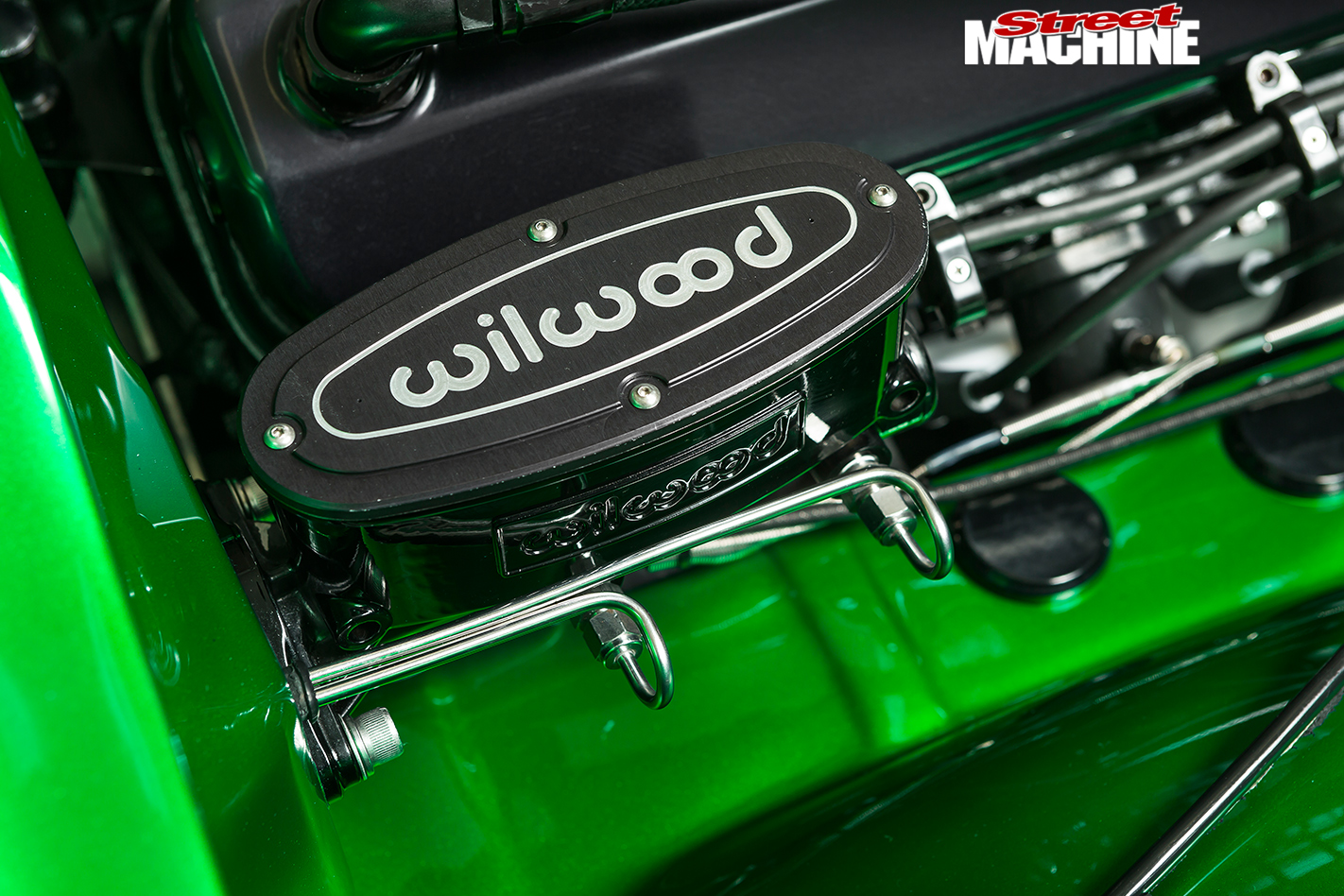 With the car in Matt’s shed the guys got to work building their masterpiece. For the heavy-duty fab work they shipped the car up to Flat Out Services in Sydney several times, whenever Flat Out had room in the workshop, but the fiddly stuff, such as making tanks and mounts, was all done in-house with the help of a couple of mates. 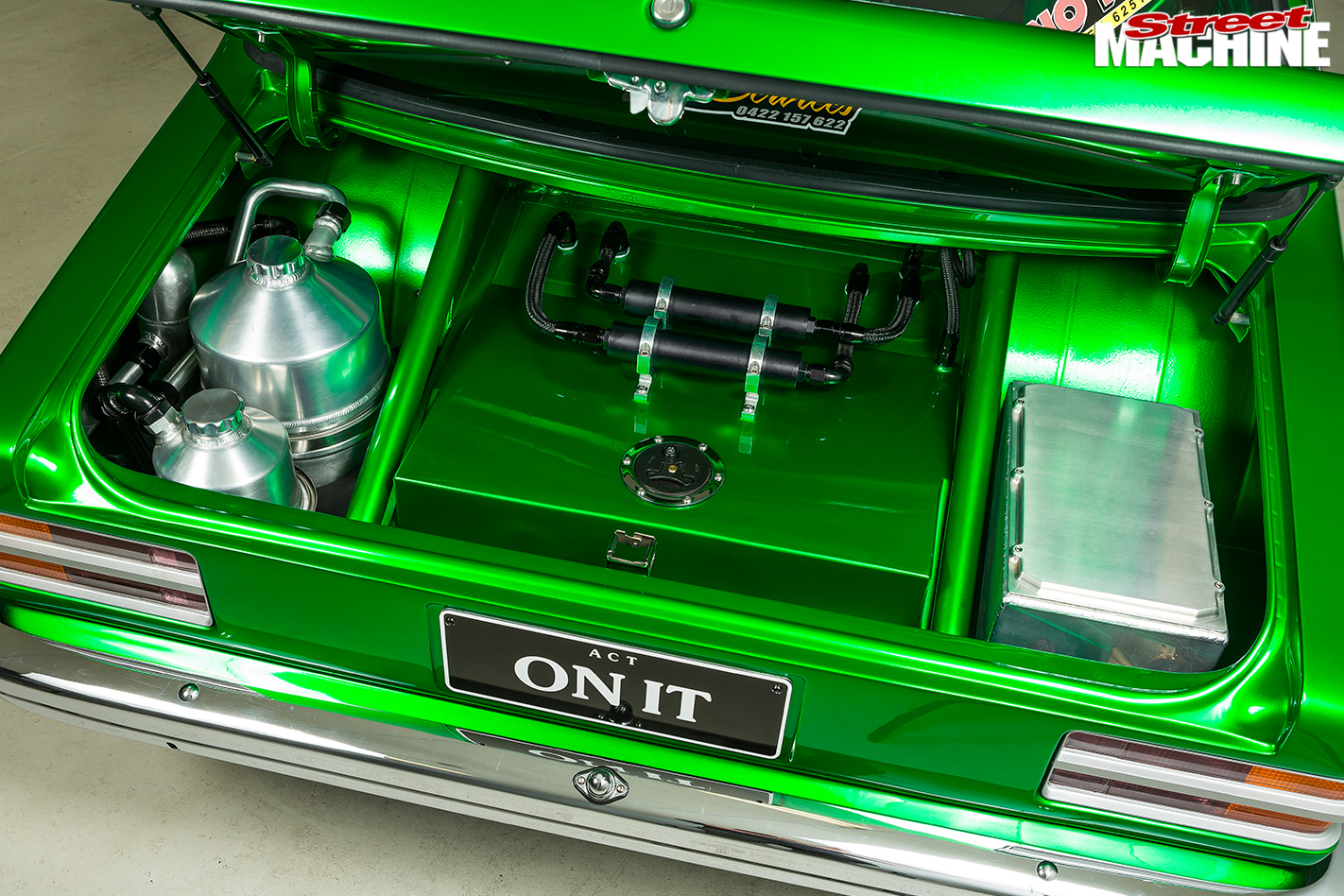 “There’s not a lot of major mods on the body; we just wanted the focus to be on the engine bay, interior and boot, which meant a lot of things had to be hidden away,” Mark says. “For example, there’s a 20-litre header tank under the front guard and the MSD and electric water pump are up under the other.” 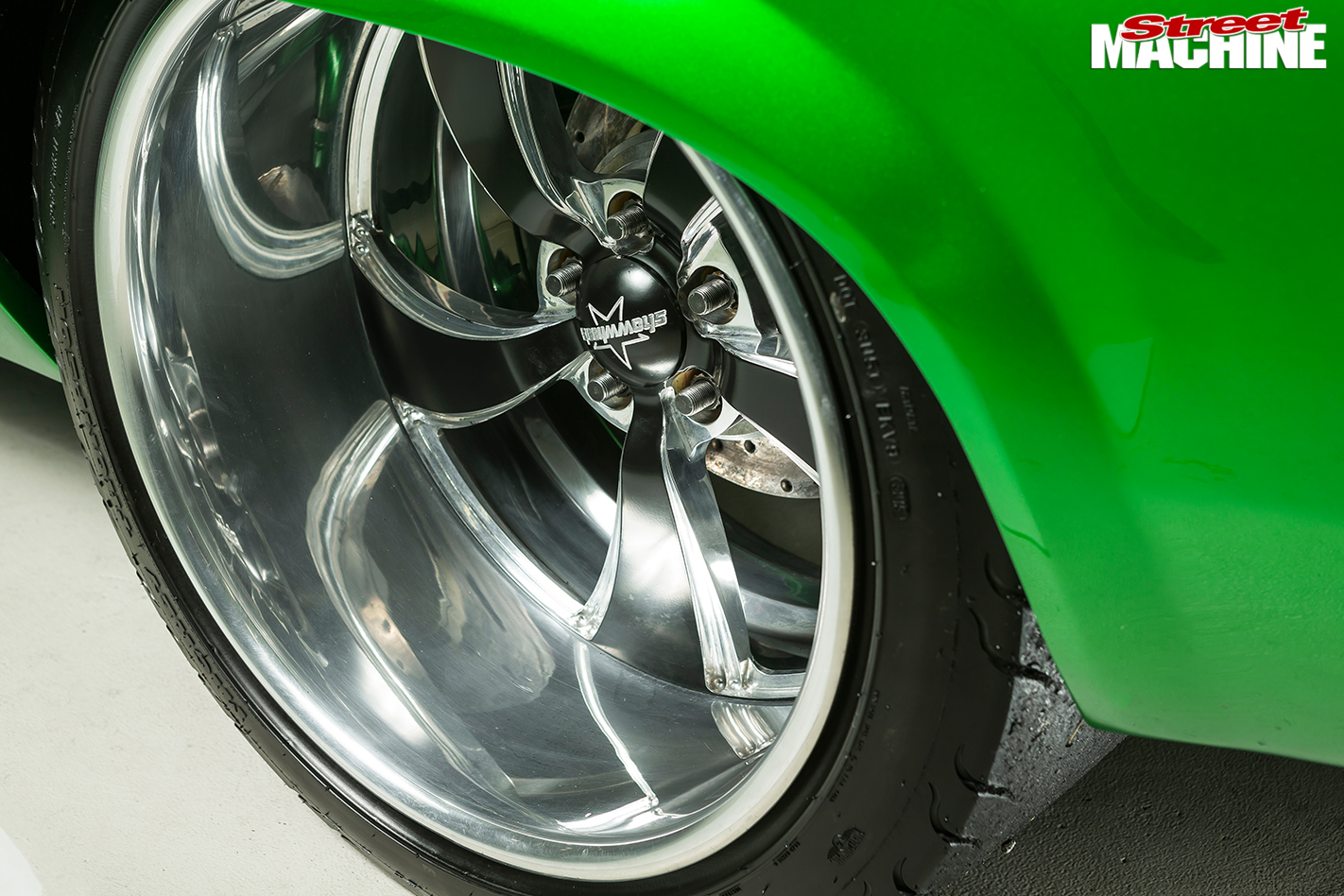 The guys made sure they talked to Sam Fenech at Westend Performance very early on in the piece, so they could get the ball rolling on the engine while they were busy building the car. Starting with a Dart Big M block, Sam filled the bottom end with all the goodies from Callies, JE and Brodix. That gave them 511 cubes to play with; throw a Blower Shop 14/71 up top and you’ve got a recipe for awesomeness. On the dyno the blown big-block cranked out a massive 1928hp at 20psi, and anyone who knows engines will tell you that’s a serious chunk of grunt. Tyres shrivel up and die at the mere thought of being bolted to this Torana. 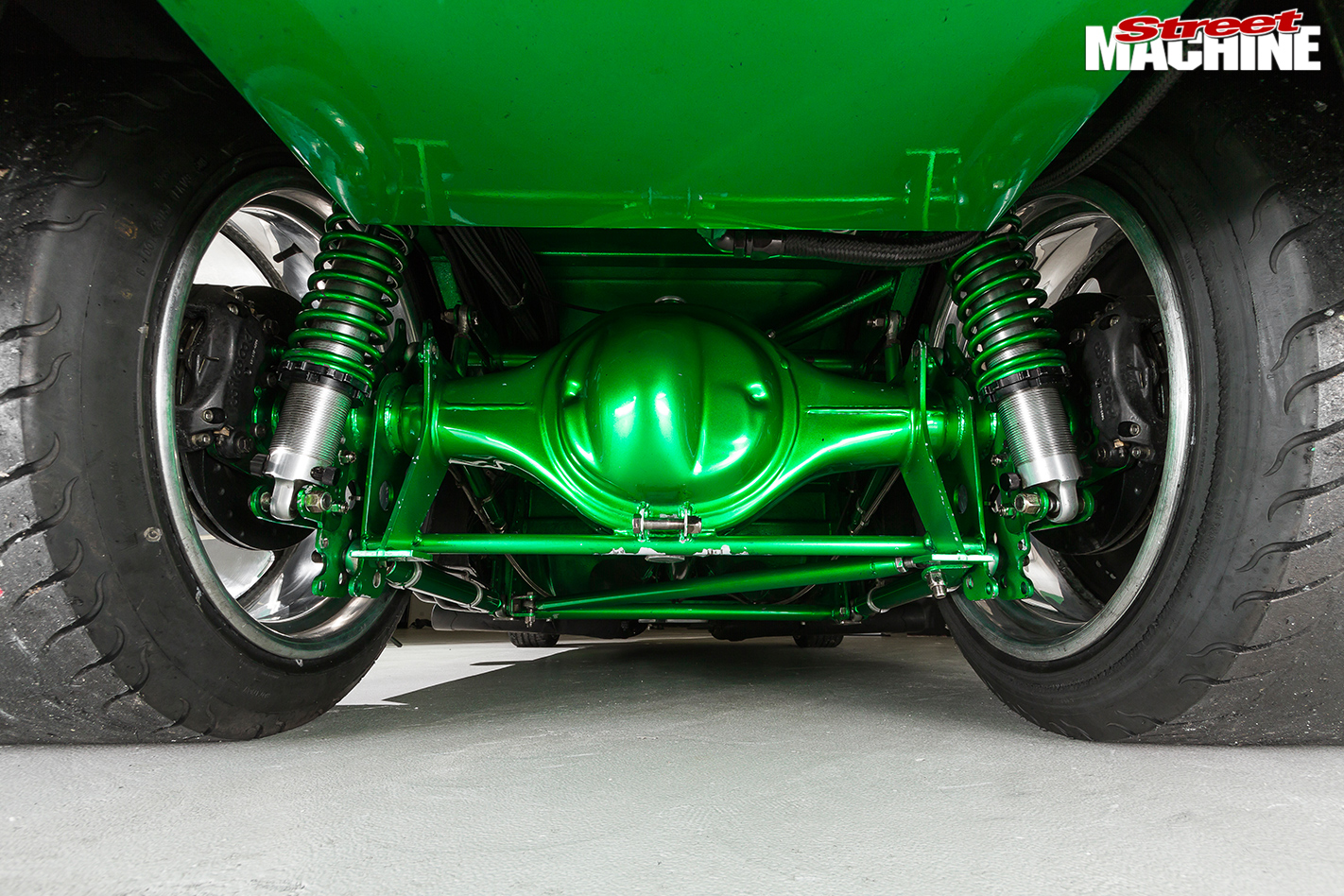 “We have detuned it a bit for burnouts,” Matt admits, “but it’s still running around 12 to 15 pounds boost and we spin it to about 7600-8000rpm. I’ve always wanted a big-block Chev, something big, loud and angry.” This engine ticks all those boxes emphatically.

Sticking with the minimalist theme while using an engine like this is harder than it looks. There’s so much going on that you almost forget the fact that you can’t see the radiator, dry sump system or any of the electronics, other than the front-mounted magneto. The custom radiator has been pushed forward and hidden from view under a neat panel, while the dry sump tanks are in the boot with aluminium hard lines connecting the front to the back. 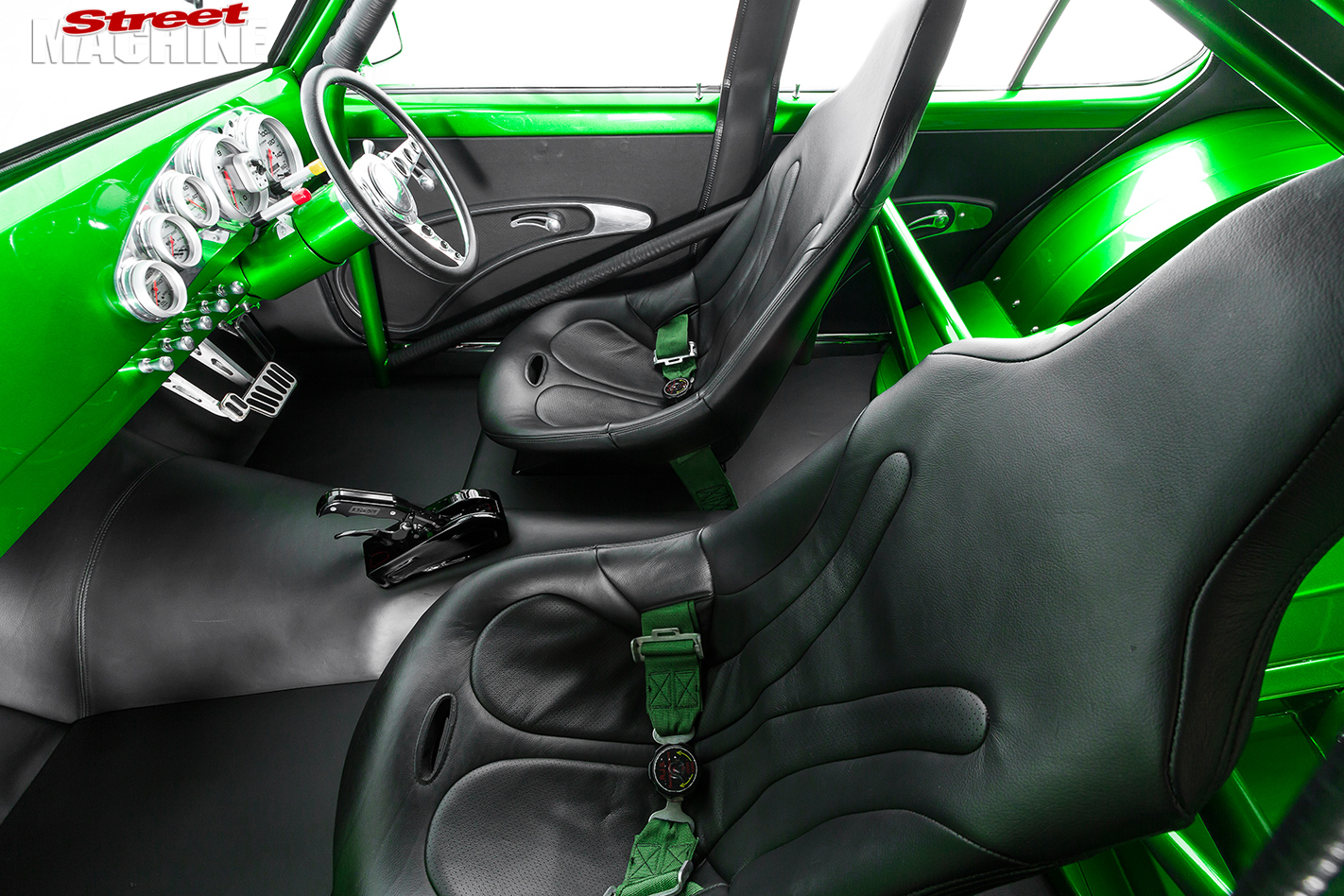 “That saved us from having to use metres of big braided line,” Mark says. “There are four large hard lines for the dry sump and the fuel system running from front to back.”

To prepare the car for skids they re-lined the existing tubs with heavy-gauge steel to protect them from exploding rubber. As for the body, it didn’t need a lot of prep before they shipped it down to Trevor Davis Auto Refinishers for a double helping of green jam. House Of Kolor Planet Green is the hue, and it glows like the car has been dipped in radioactive goo. 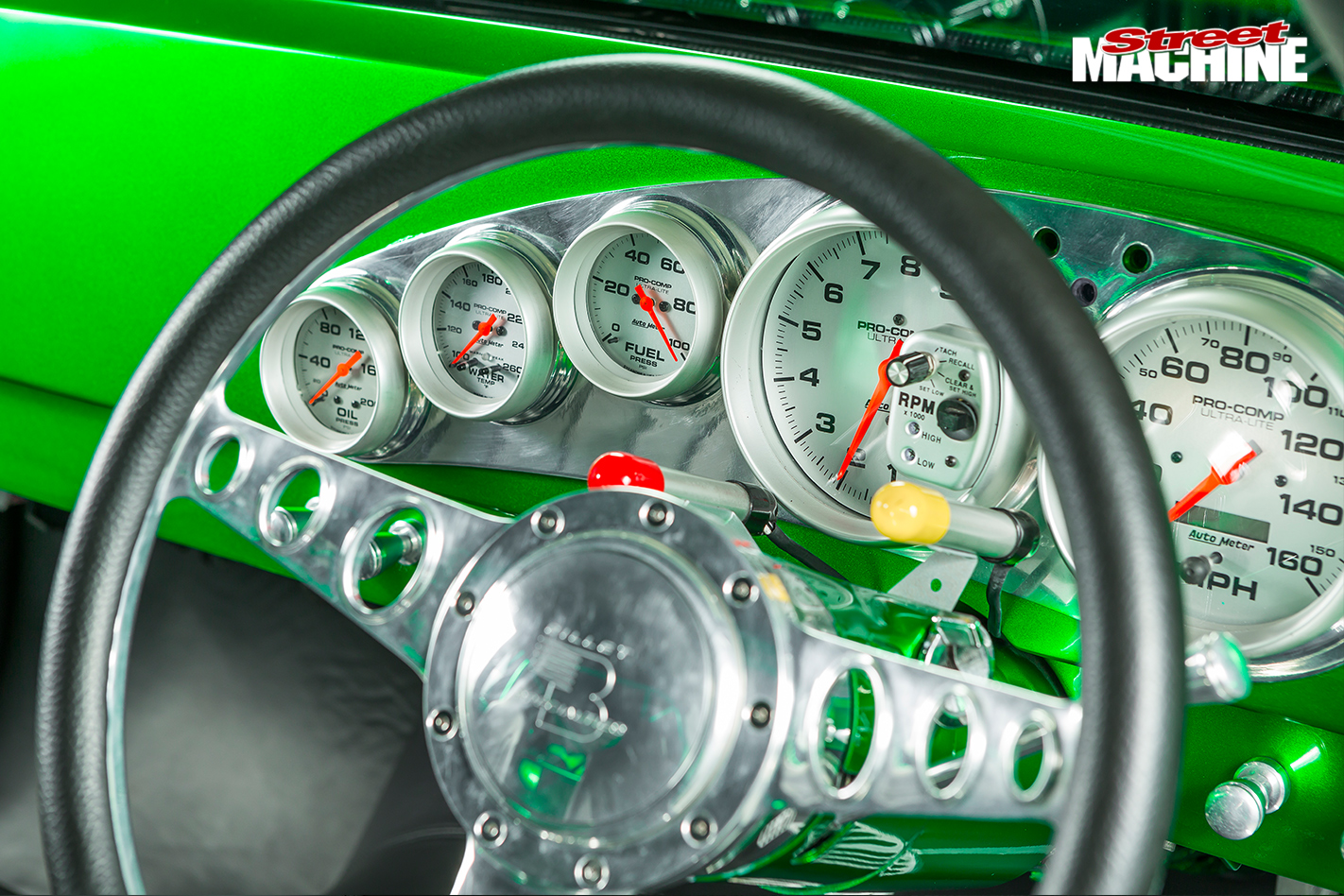 With all the hard stuff done it came down to the boys bolting the rest together in Matt’s shed, but we had to ask the question: Did the guys agree on everything?

“We compromised on a few things,” Mark says. “For example, I wanted a tubular front end, where Matt was happy to use the stock front end. But on the other side I was happy to use cloth in the interior whereas Matt wanted the black leather.” The end result is a car that’s a lot nicer than either of the guys would have built by themselves, and something that Mark admits is “probably a bit too nice for skids.” 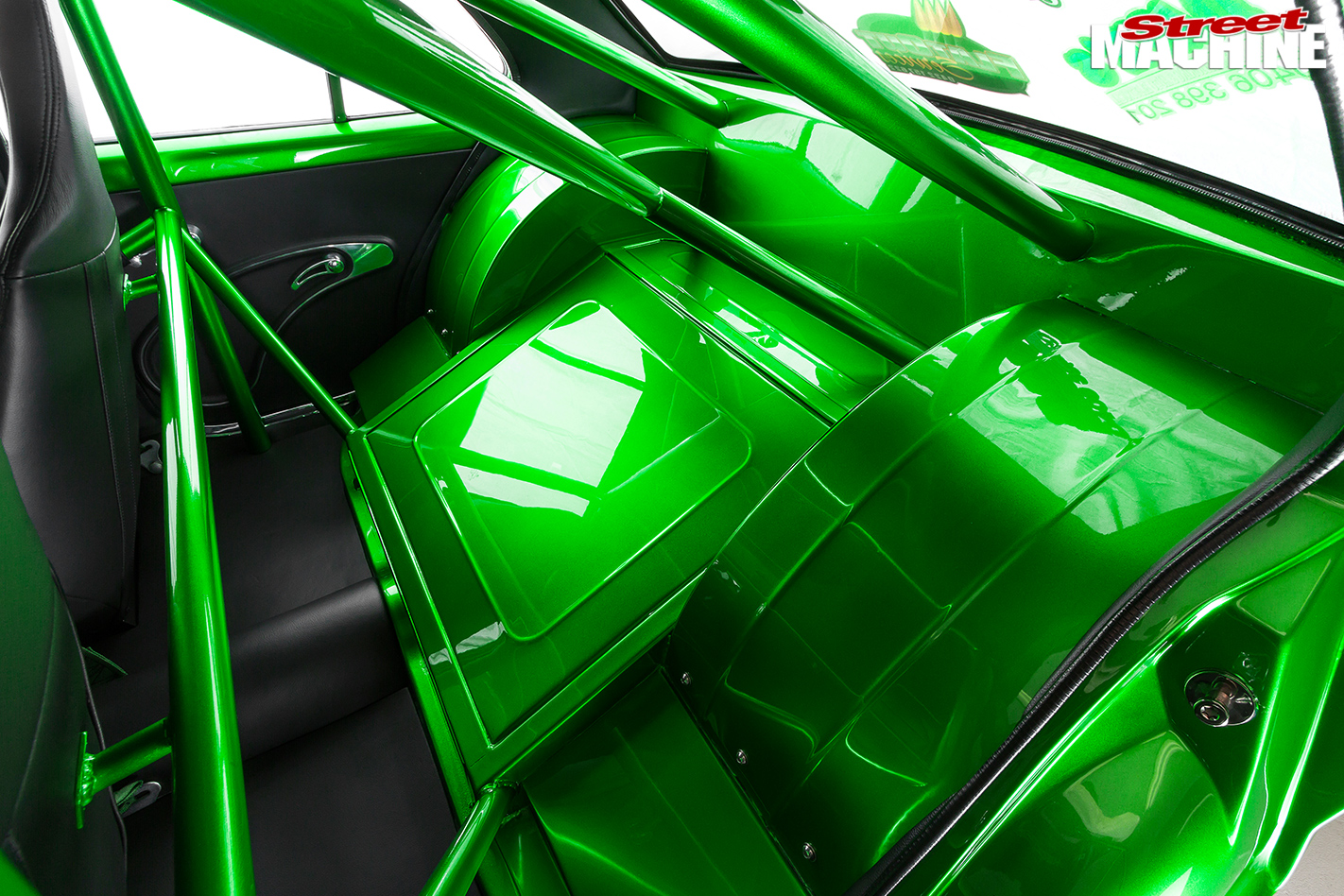 From the outset the guys wanted to qualify the car for the Burnout Masters, and they’ve done that with Matt. But instead of just waiting until Summernats 30 the pair have a big list of events planned over the next five months.

“We’re still thinking about whether to do MotorEx or not, but we’re going to stick it on a truck to Cairns for Tropical Meltdown, then there is Burnout Outlaws in Sydney and Powercruise in Queensland,” Mark says. 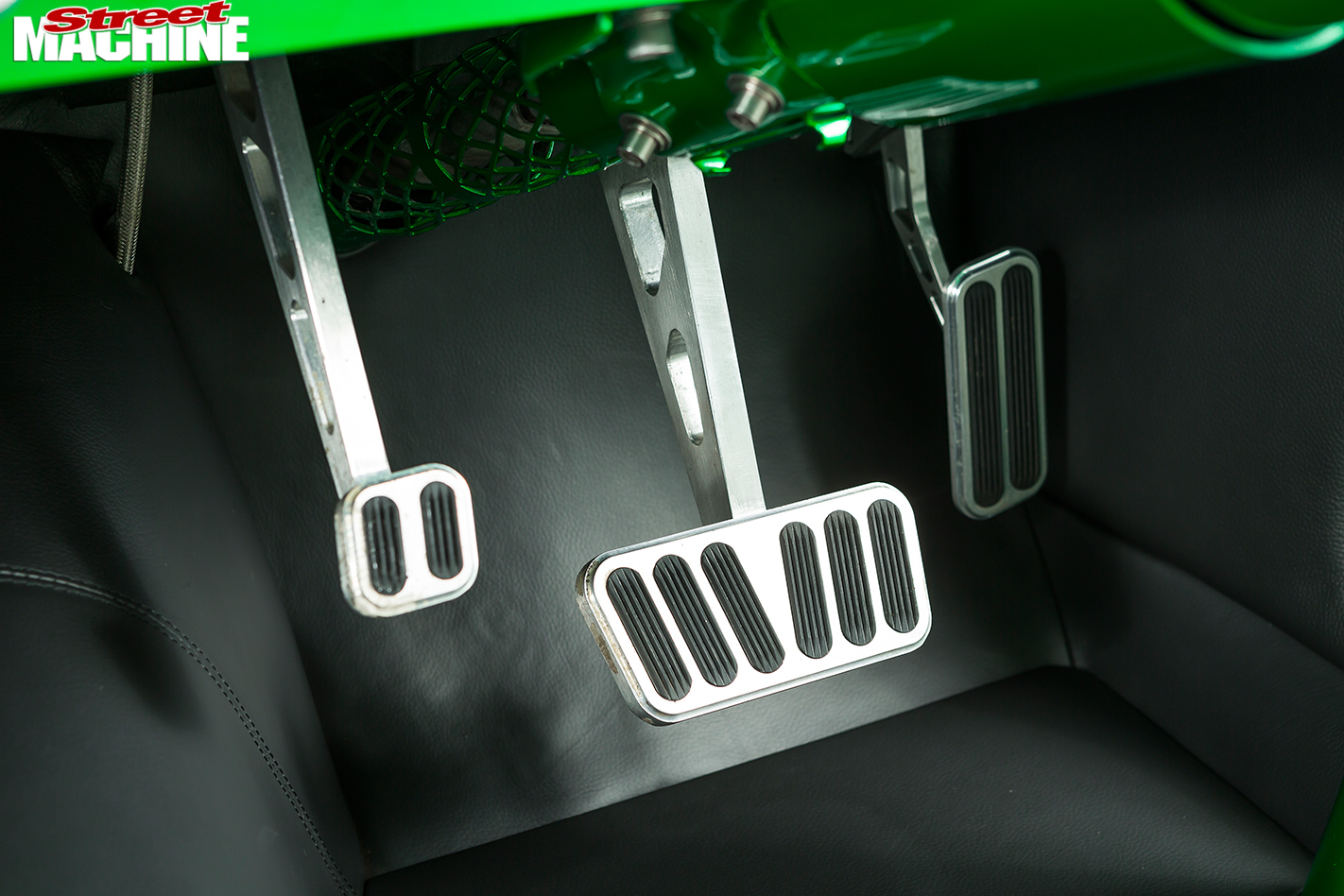 This car was built to drive and the boys are definitely looking to get their money’s worth out of it. “The best bit,” Mark says, “is that most tracks allow a passenger. So even if you’re not driving, you can still go for a ride and enjoy yourself.” 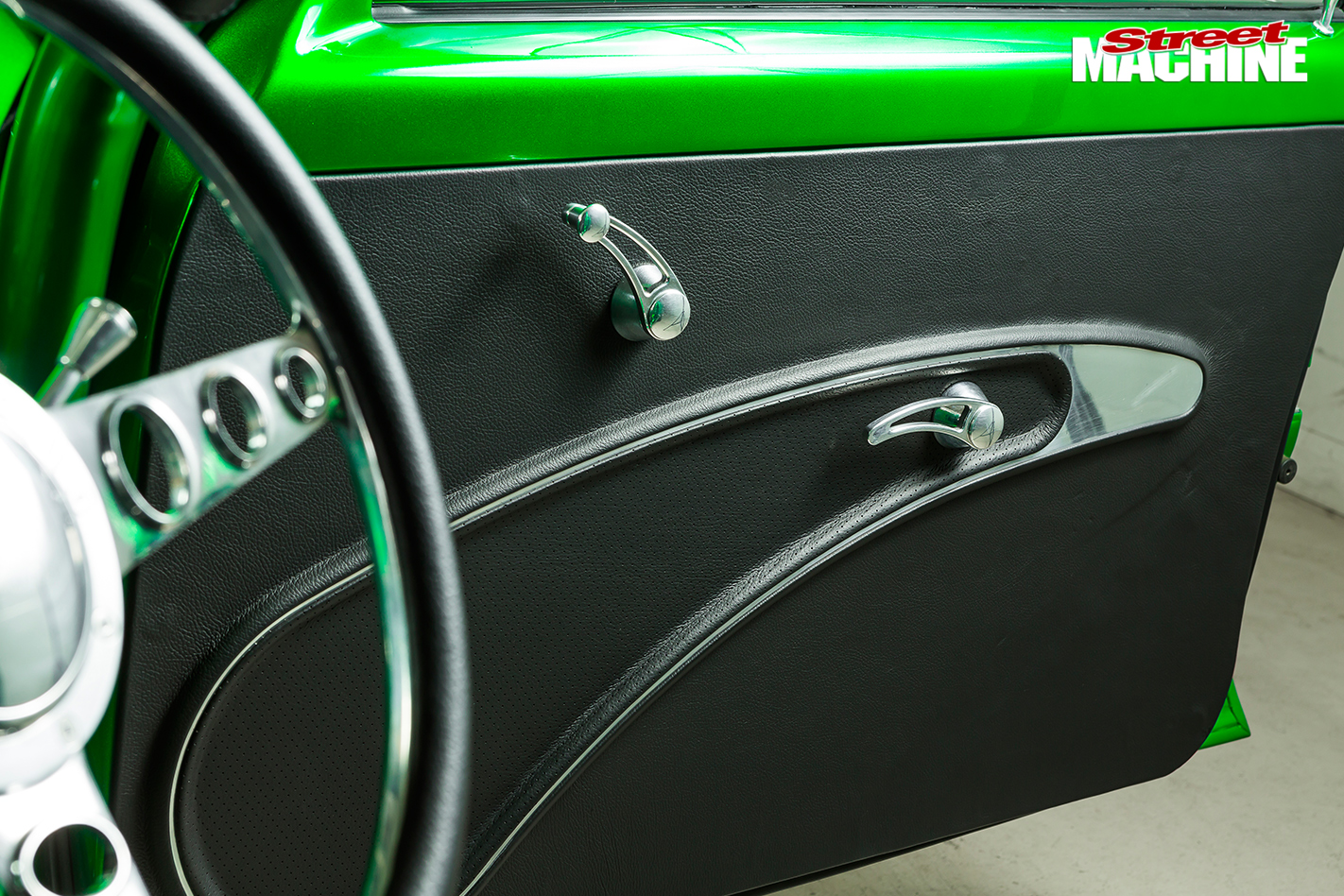