ADAM Buffett bought this street-clad V8 LJ Torana as a fun machine and like many of us, he used it now and then to race other like-minded people on the streets.

Bought from a fella in Lakemba, Sydney, it had been kept registered for 30 years. But as soon as Adam got into it, he ran into a problem. 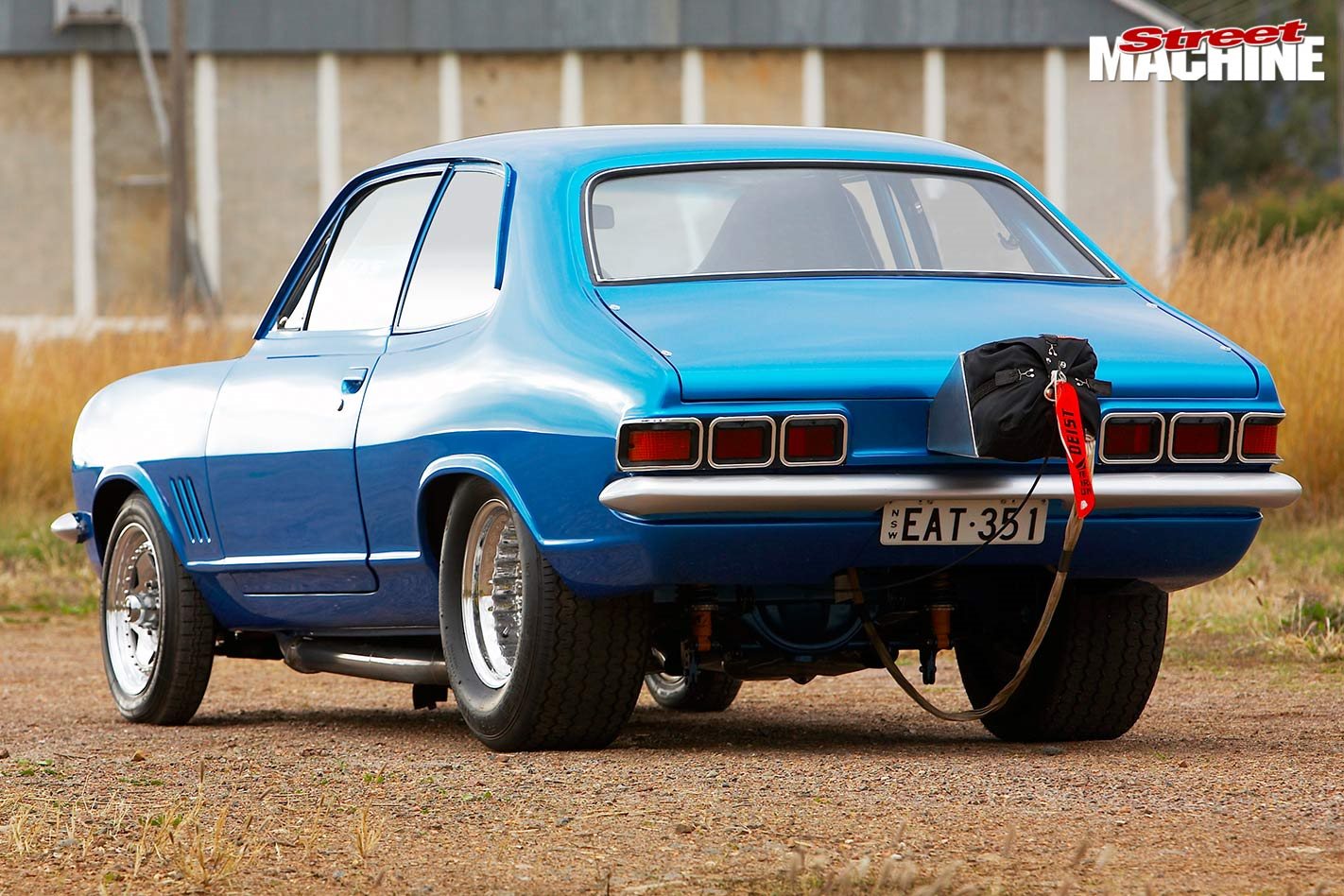 This GTR LJ was bought as a street car but it’s now one of the classiest looking street-class racers out there. Adam has already cracked an eight — but that was down the eighth-mile

“I kind of got the car impounded,” he says. “I was racing this other guy and I came back for some more. I ended up doing this 30-metre burnout in front of some coppers hiding in a street nearby, and that was the end of that.”

For his antics, Adam was slapped with a fine and the car spent three months in the holding yard. Being impounded not only means time away from your machine but it’s also heavy on the wallet: “It cost me about three grand to get it out.” 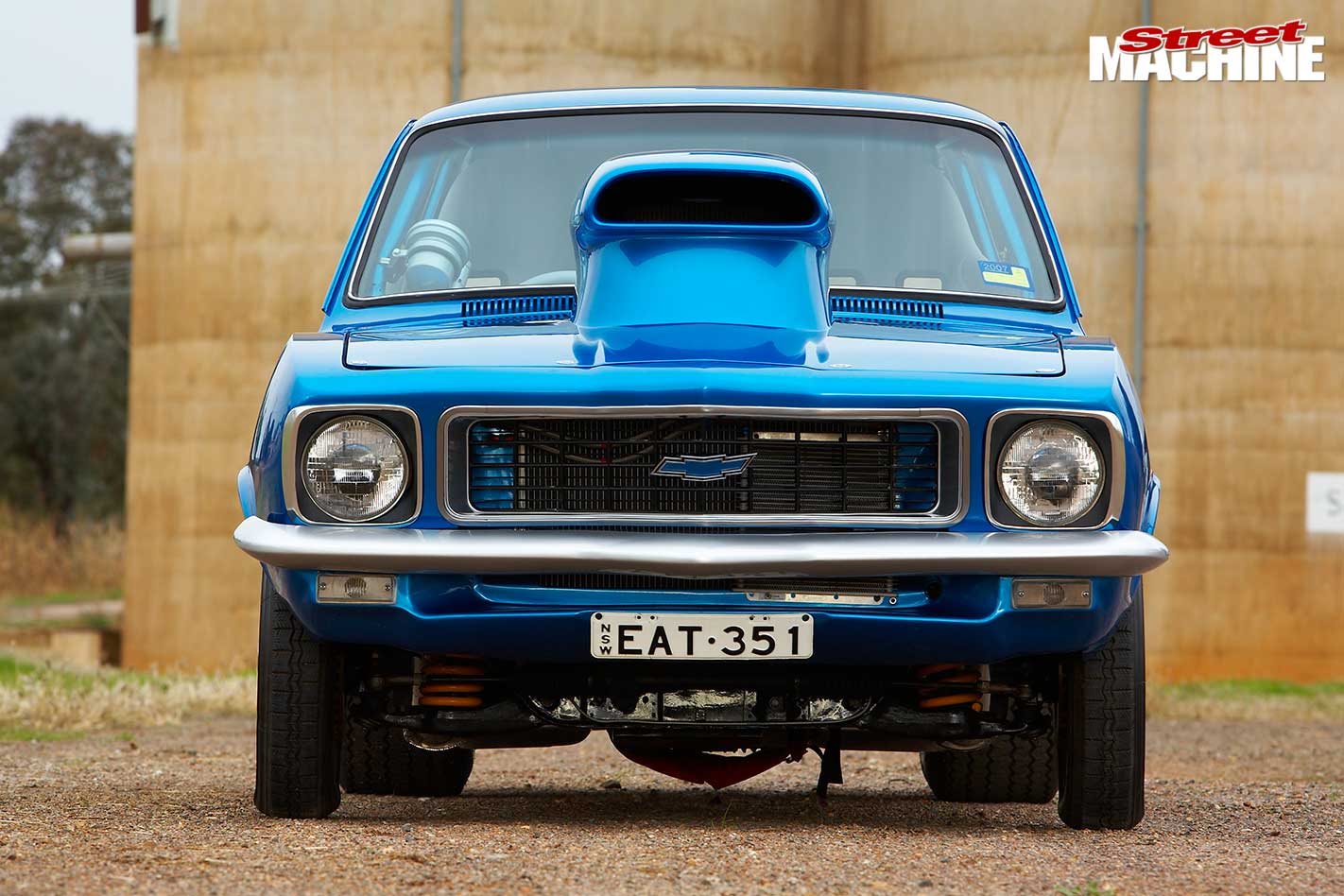 Being without a car offered time for reflection and Adam came up with a crazy plan to save some money and completely rebuild the car the minute it was released. Inspiration surfaced at the old Eastern Creek racetrack — he spent a lot of time watching while he was car-less, you see.

“In particular, I used to watch Simon Kryger in his old LJ and Michael Barbera’s LJ. I met both guys through my engine builder, John Feneck. Watching these guys race, seeing them at shows and watching them drive on the street took its toll,” Adam says. “I wanted to keep up with Kryger, so I eventually had to have one.” 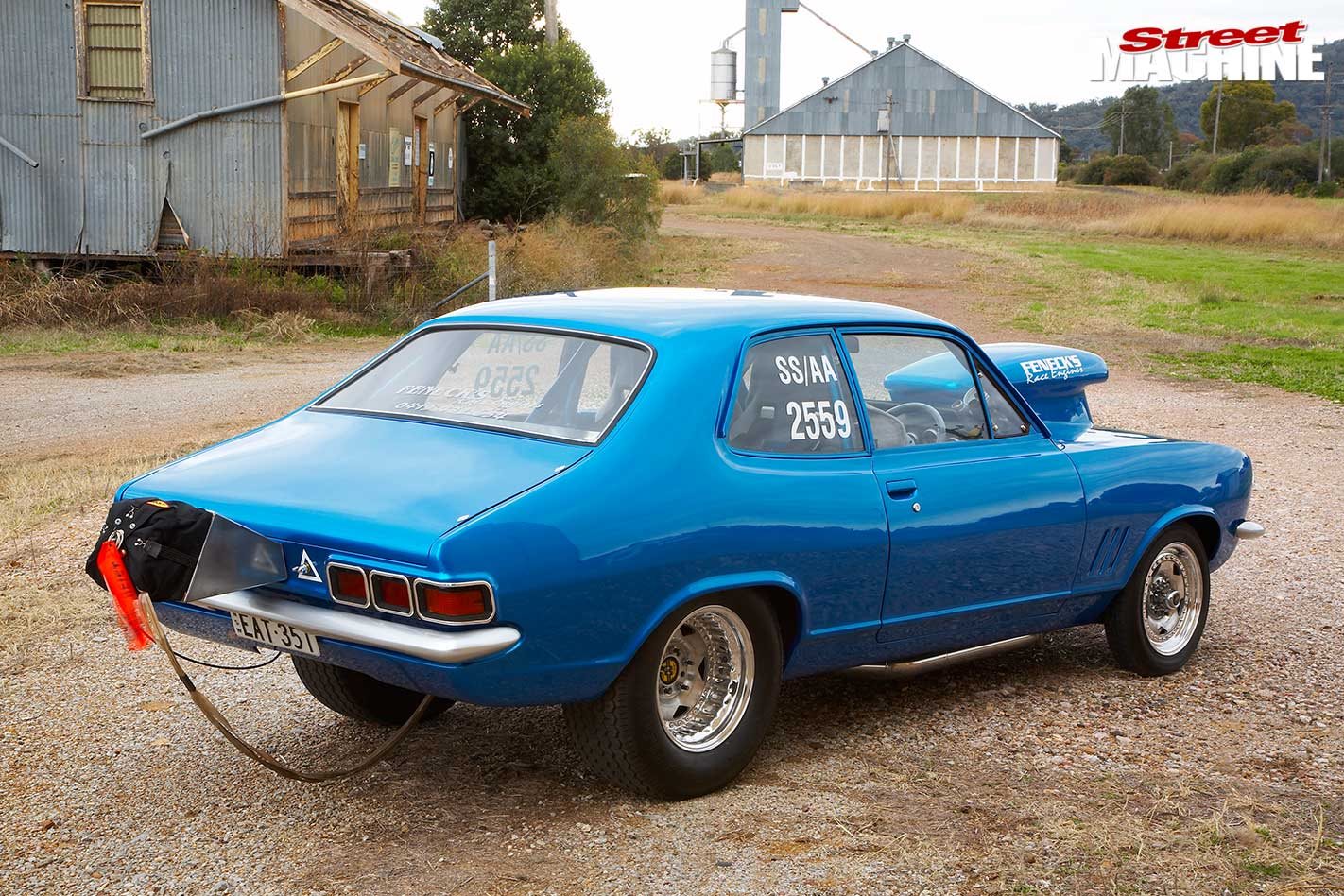 The LJ coupe’s shape appealed to Adam and the power-to-weight aspect backs it up.

“I like LJs; they’re small, lightweight and look tough on the street,” he says.

Back from the detention centre, the LJ looked slightly more rundown than it did when it entered. That really didn’t matter, however, as Adam only had one thing on his mind at this point: a full-on rebuild incorporating dirty great tubs. 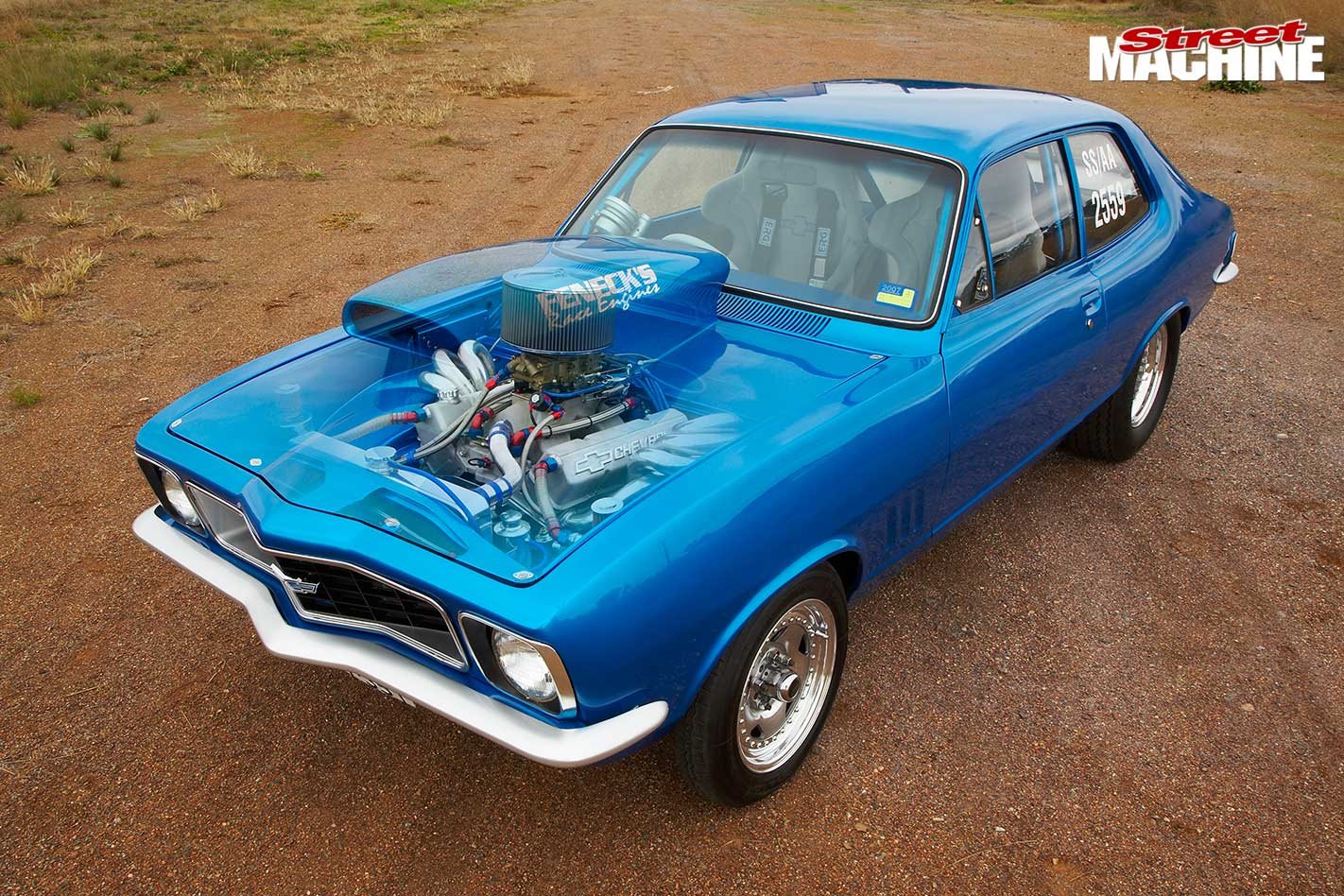 Agenda item number one was to strip the car and have it ready for Pete Cleary at Mick’s Metal Craft. He carried out all the fabrication work like those tubs and an eight-point rollcage, as well as that smooth engine bay and interior.

It’s a killer machine, even if Adam’s a little coy with information on the build. Under-bonnet clutter has disappeared, highlighting the pipe work, with the custom headers flowing from the block through the custom sheet-metal inner guards to a 3.5-inch, HPC-coated dual system. 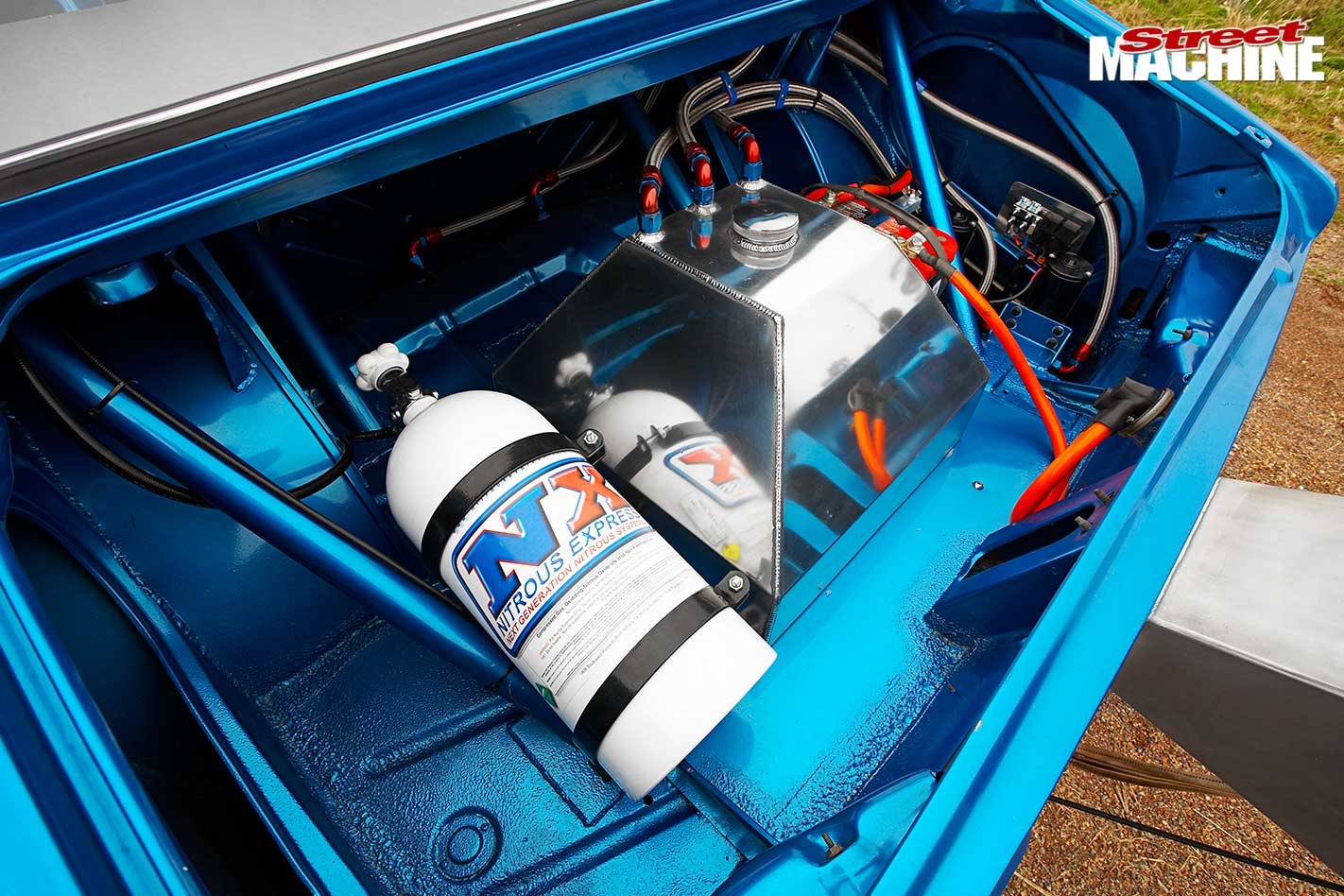 Where the heater box once lived you’ll now find a sealed flat wall; out back, the wheelarches have been stretched, widened and smoothed off to squeeze bigger rubber underneath; the interior is flat-panelled and the dash now contains an array of gauges telling you exactly what you need to know when you’re living right on the edge.

Paint and panel work was carried out by Paul Cundy, of Cundy’s Smash Repairs in Armidale, and the colour is a secret. “I don’t really want to let out the exact colour,” Adam says. “Just call it Cundy Special Blue.” 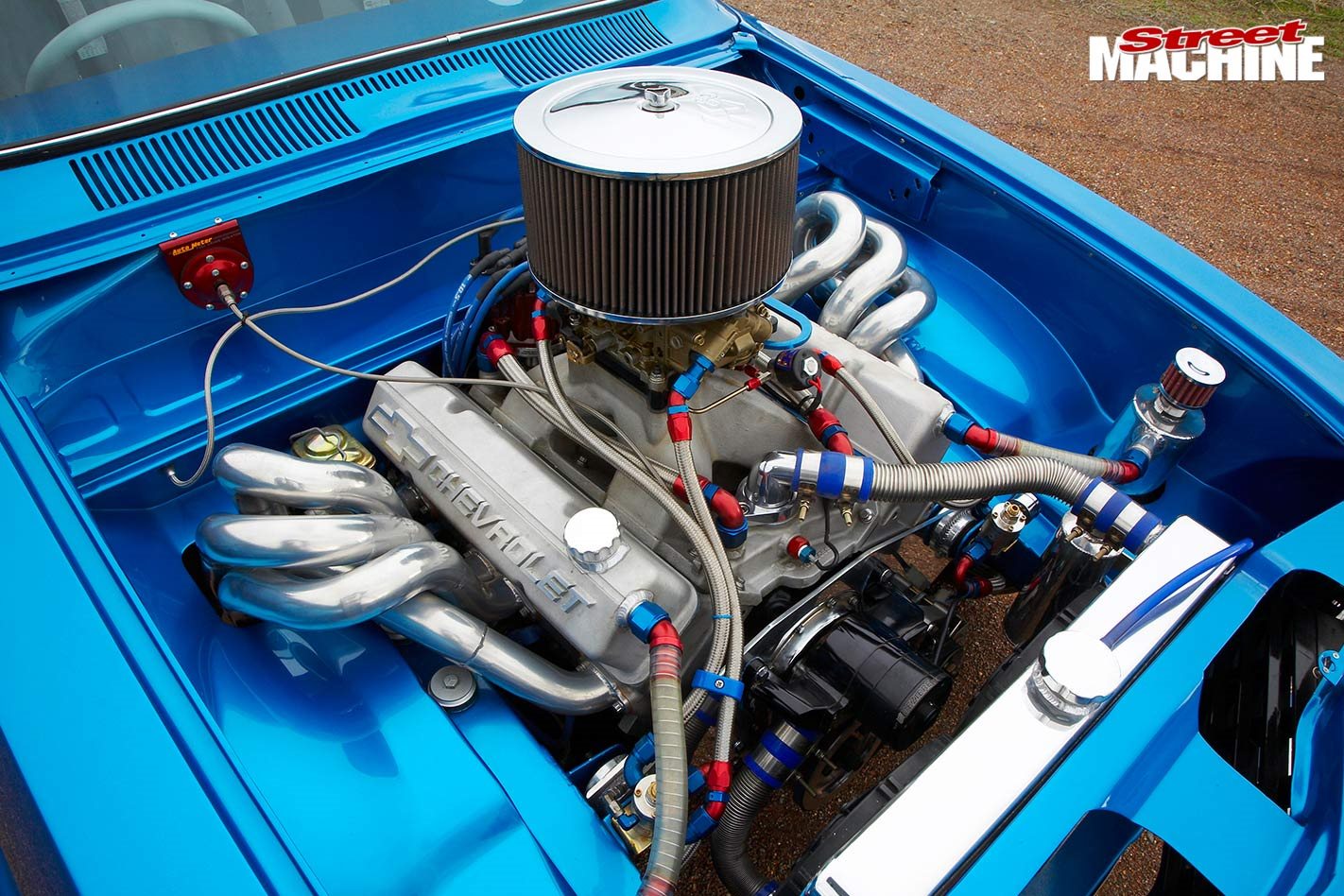 Adam would never touch a Ford donk, in case you didn’t get the hint from the plates. Feneck Race Engines is responsible for squeezing big cubes into a small-block

Adam has much praise for Paul’s handiwork. “If we’d seen the panels before they were sandblasted, we wouldn’t have gone ahead,” he says. “But Paul knows what he’s doing; the finished product is awesome.”

Less is more when it comes to weight and race cars, so the LJ runs a fibreglass bonnet and boot, and there’s little more than the basics inside: Velo Polaris seats (trimmed by McFarlane Motor Trimming), MOMO steering wheel, Auto Meter gauges, B&M Pro Ratchet shifter and five-point harnesses. 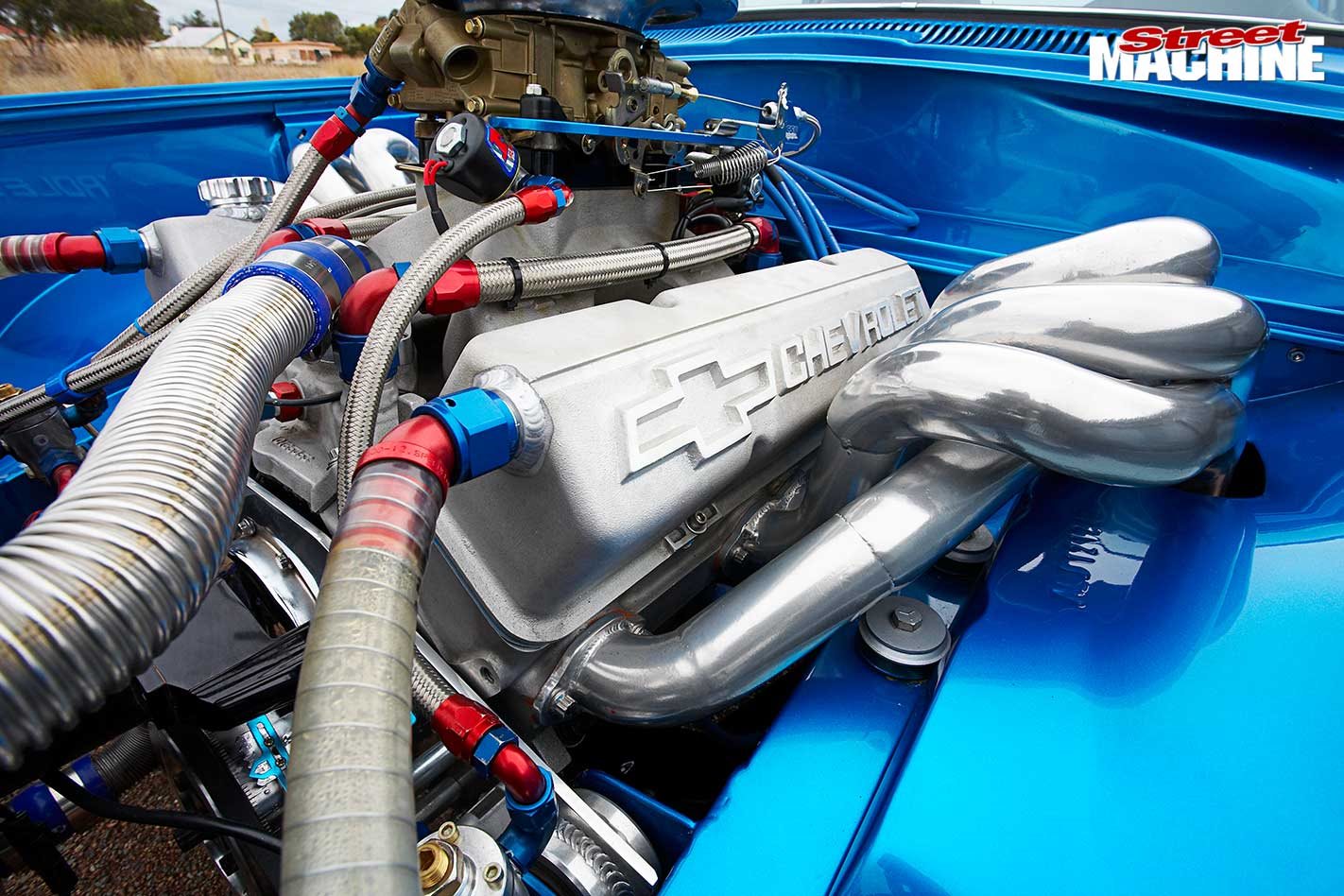 From the start, Adam knew what he wanted in terms of power but topping the list of priorities were competitiveness and reliability.

“I wanted big-block cubes in a small-block,” he says. His reasoning? “That way you’re not revving it hard for maximum gain.” 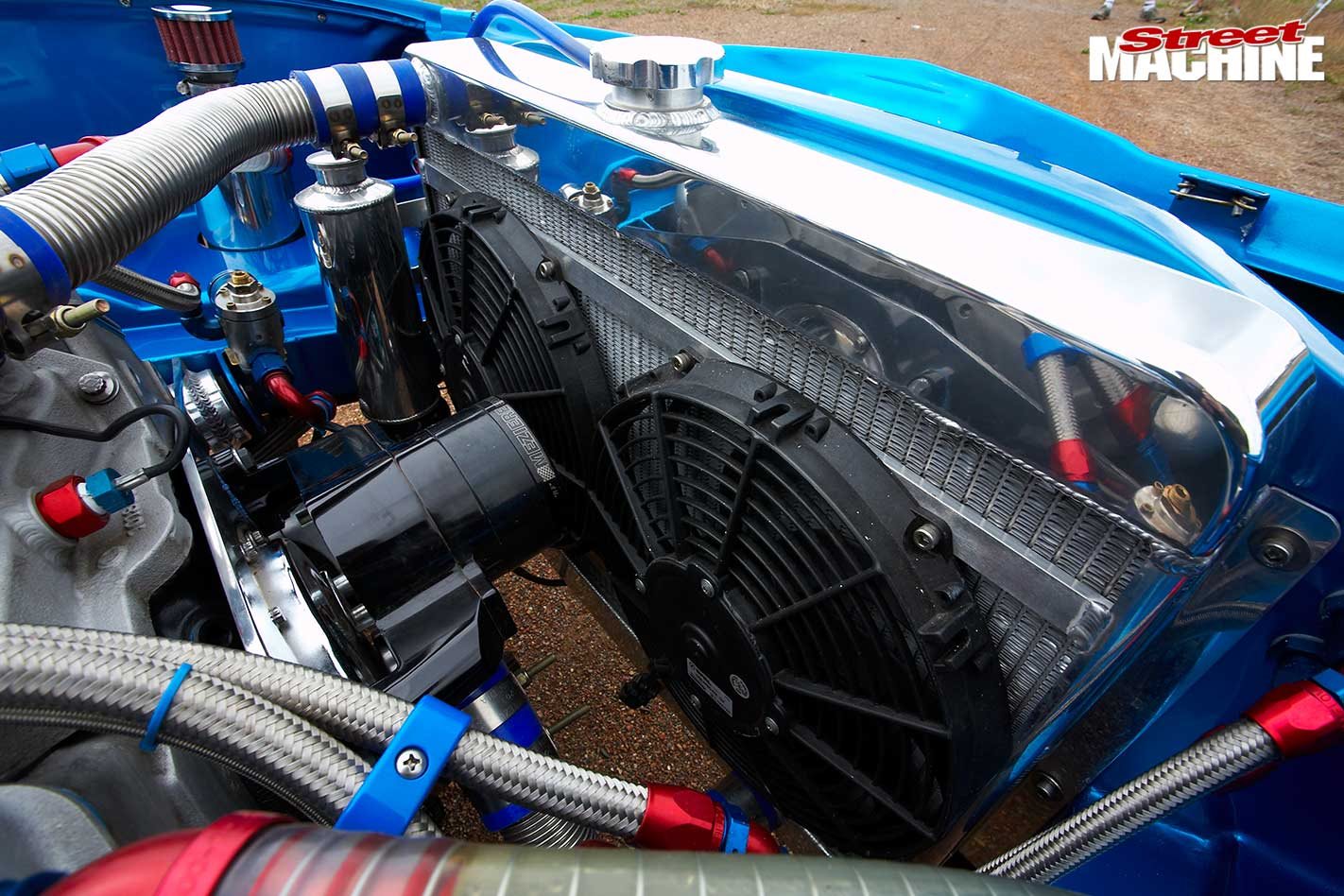 “The heart is the head, camshaft, a strong bottom end, and cubic inches,” John says. “You mix that together and you’re well on your way.

“The bottom end is just for reliability, it’s only an air pump. The secrets are the cylinder heads and the camshaft. Adam’s engine carries the best rods money can buy and a good set of pistons; it’s a little heavyweight, but reliable.” 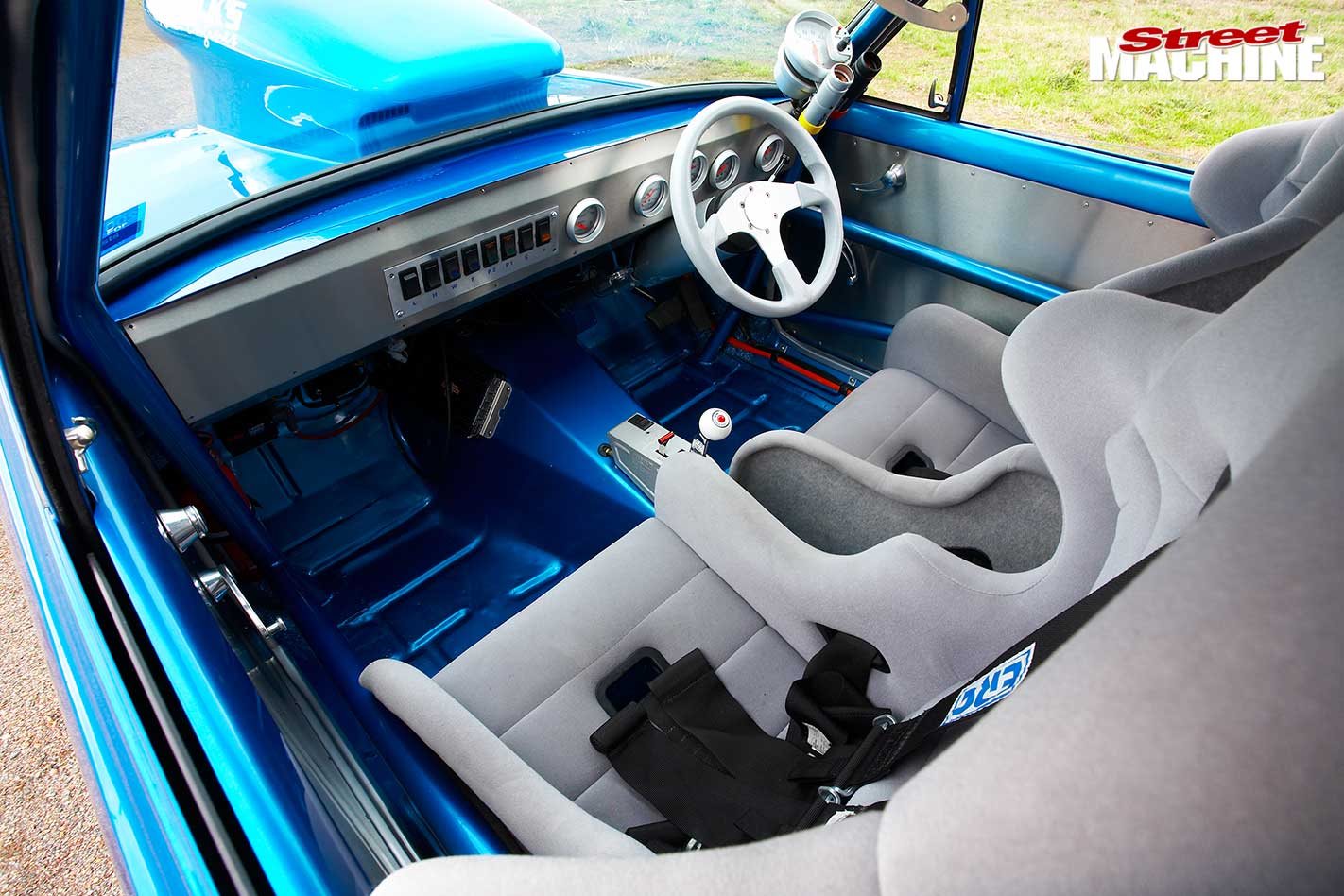 All the torque travels to a fully worked two-speed Powerglide and back via a Mark Williams 3.5in tailshaft to a shortened and braced Ford nine-inch with Williams centre and 35-spline axles.

Braking is a mix of good ol’ Aussie know-how: XA master cylinder, with HQ discs up front and XY discs at the rear. And then there’s a parachute for those extra-special runs down the quarter. Noltec bushes mixed with King springs, 90/10 shocks and coil-overs balance everything when the power is unleashed. 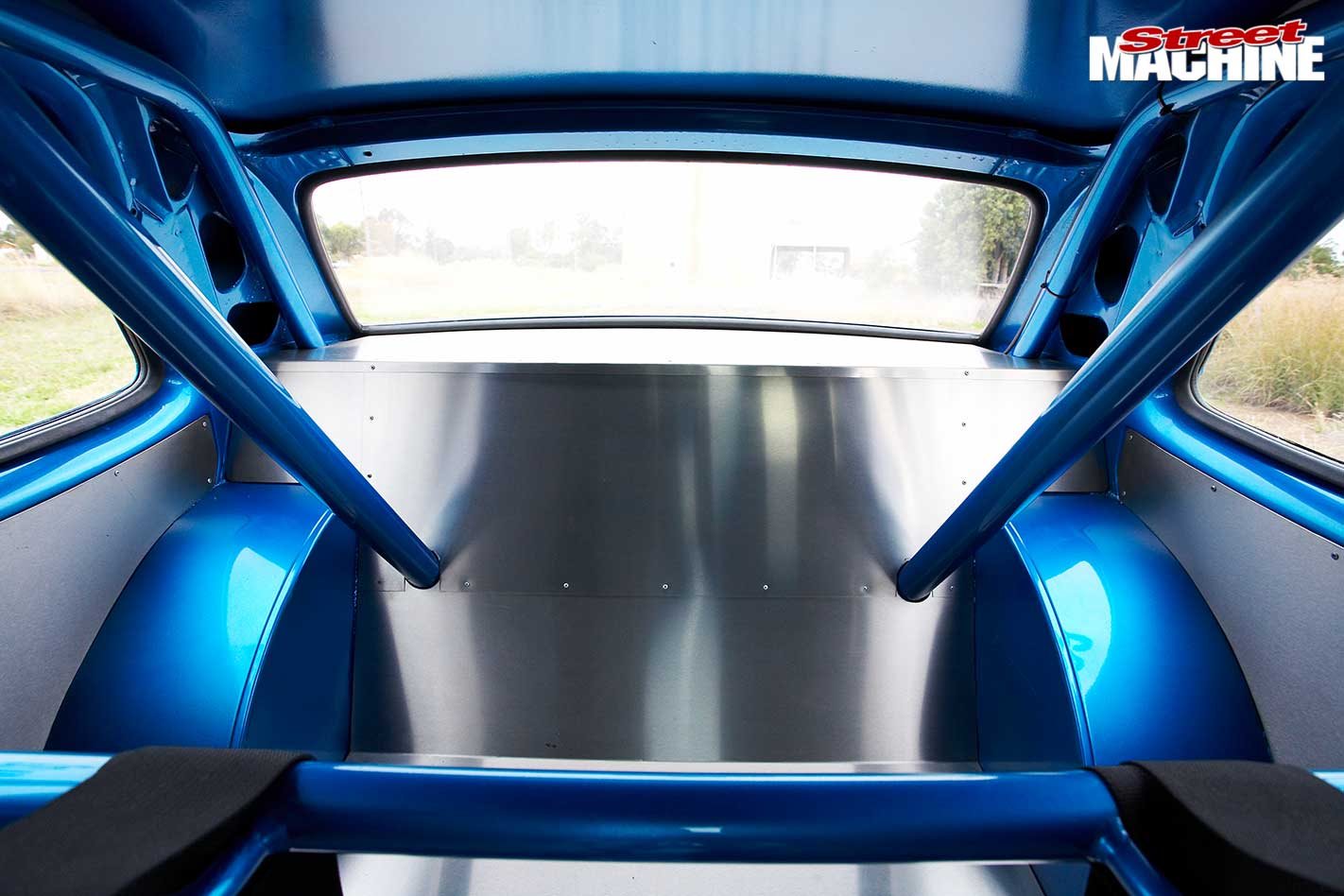 And finally, capping off the tough drag image, is a set of Convo Pros wrapped in super-sticky Mickey Thompson rubber.

On paper, Adam’s EAT351 Torana sounds like breakfast is served. But before we settle in to the Coco Pops we’ll have to wait for the official timeslip. 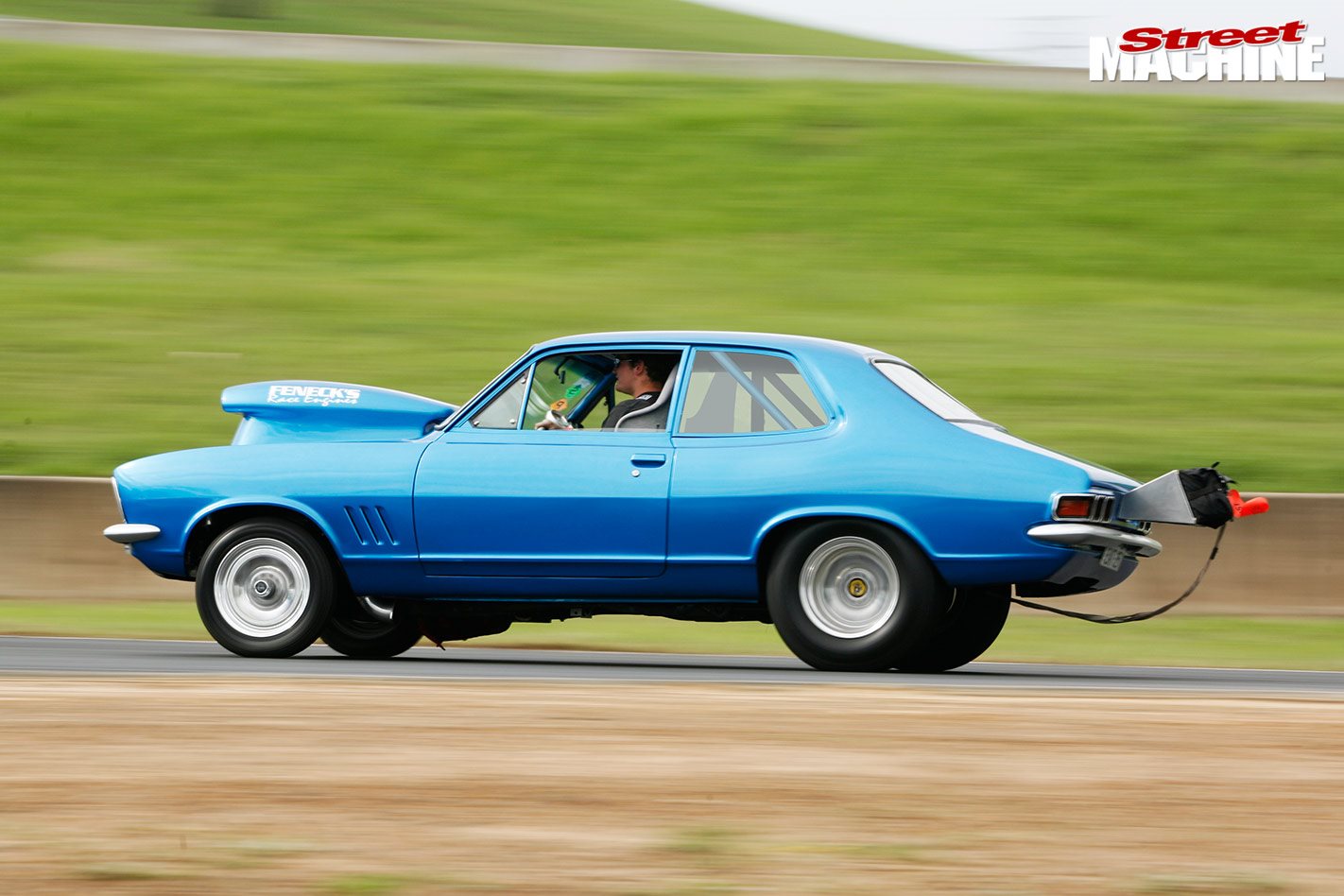