YOU know you’ve got an understanding missus when you head out one Saturday morning to buy a new couch and come home with a Torana instead. 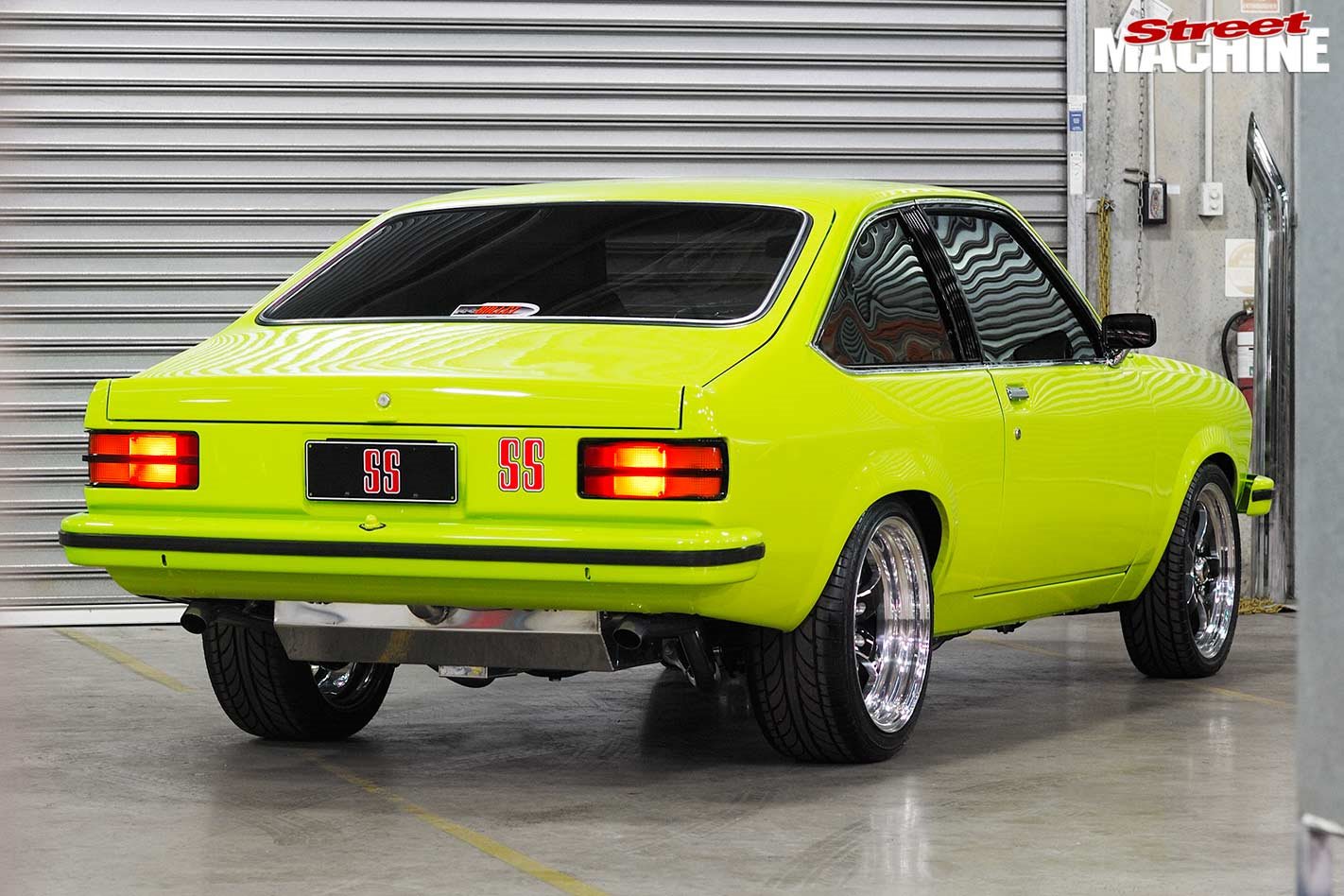 “About five years back, my then-fiancée Alana and I were going shopping for a new couch. On the way I noticed the back end of an LX hatch in someone’s driveway with a ‘for sale’ sign on it,” Mark House said. “I turned around, spoke to the owner and bought the Torana with the couch money. As you do!”

You can sit in a car but you can’t drag race a couch, and Alana obviously realised this basic truth because not only did she agree to Mark buying the Torana, she subsequently gave him the nod to rebuild it for their wedding — at the time a mere 12 months down the track.

“She’s very supportive but I don’t think she realised how much of a money-pit it would be. She’s learnt not to ask how much things cost because she prefers not to know!”

It’s one thing to rebuild a car from scratch in a year but it’s quite another to build one to the standard of Mark’s hatch. From its concours-quality SS interior to the flawless Barbados Green duco and awe-inspiring engine bay, it’s a stunner, and since completion it’s been rewarded with a multitude of trophies. Mark’s a spray painter by trade, and had he not been able to do the majority of the work himself — with the assistance of some good mates — he wouldn’t have been able to pull it off. 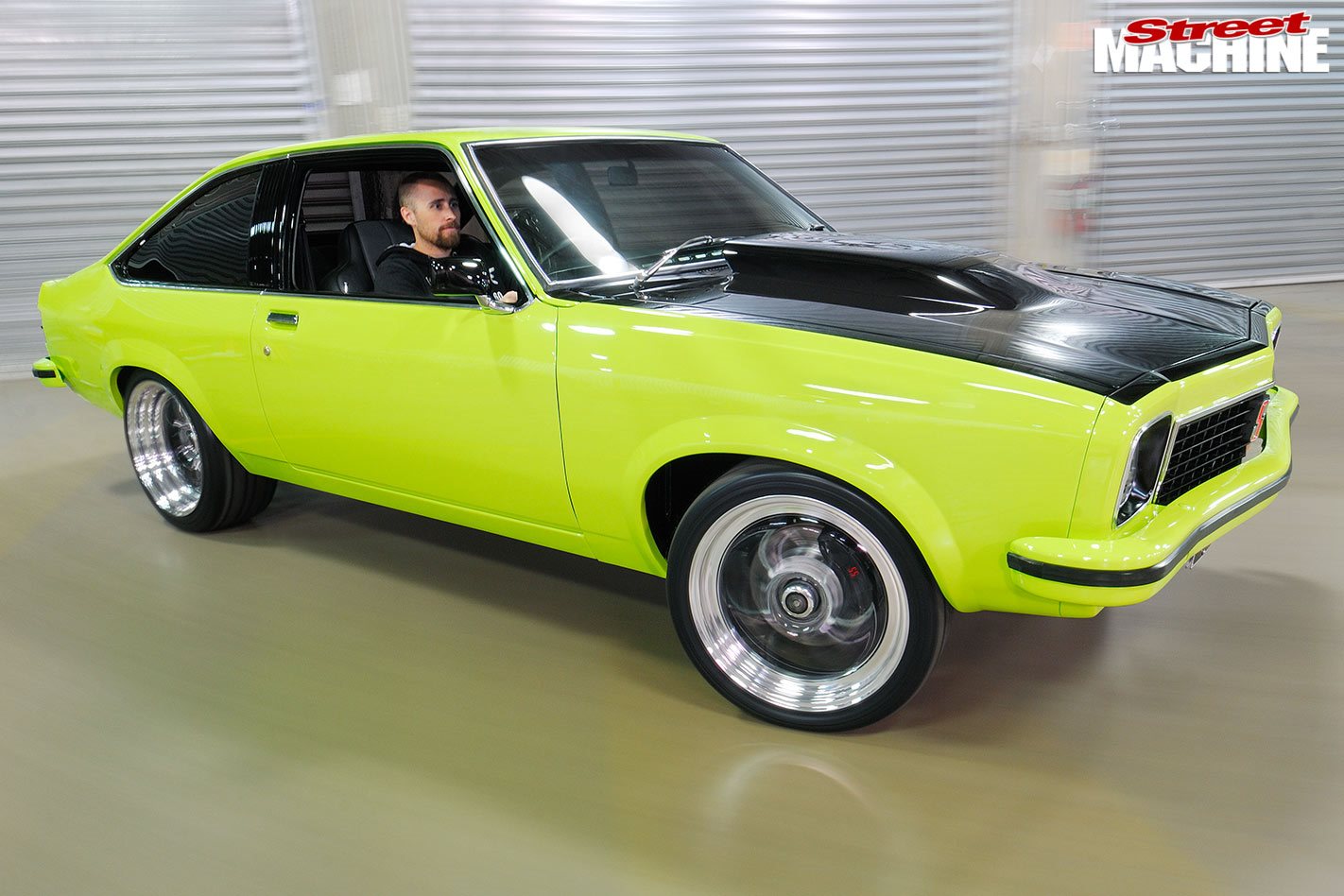 “Being a painter and having mates who are panel beaters helped a great deal,” he said. “Knowing how much hard work and how many hours we put into the car, if I’d had to pay a shop to do it there’s no way I’d have been able to afford it and it wouldn’t have turned out exactly as I planned. Dad has a big workshop where we did the majority of the build, which came in handy.”

The engine bay is a standout feature and that’s where he and his panel beater mates focused their efforts, sacrificing countless hours to weld, grind and sand until the desired effect was achieved.

The battery tray and heater box were removed and the whole show was smoothed out until it was symmetrical left to right and completely devoid of imperfections. 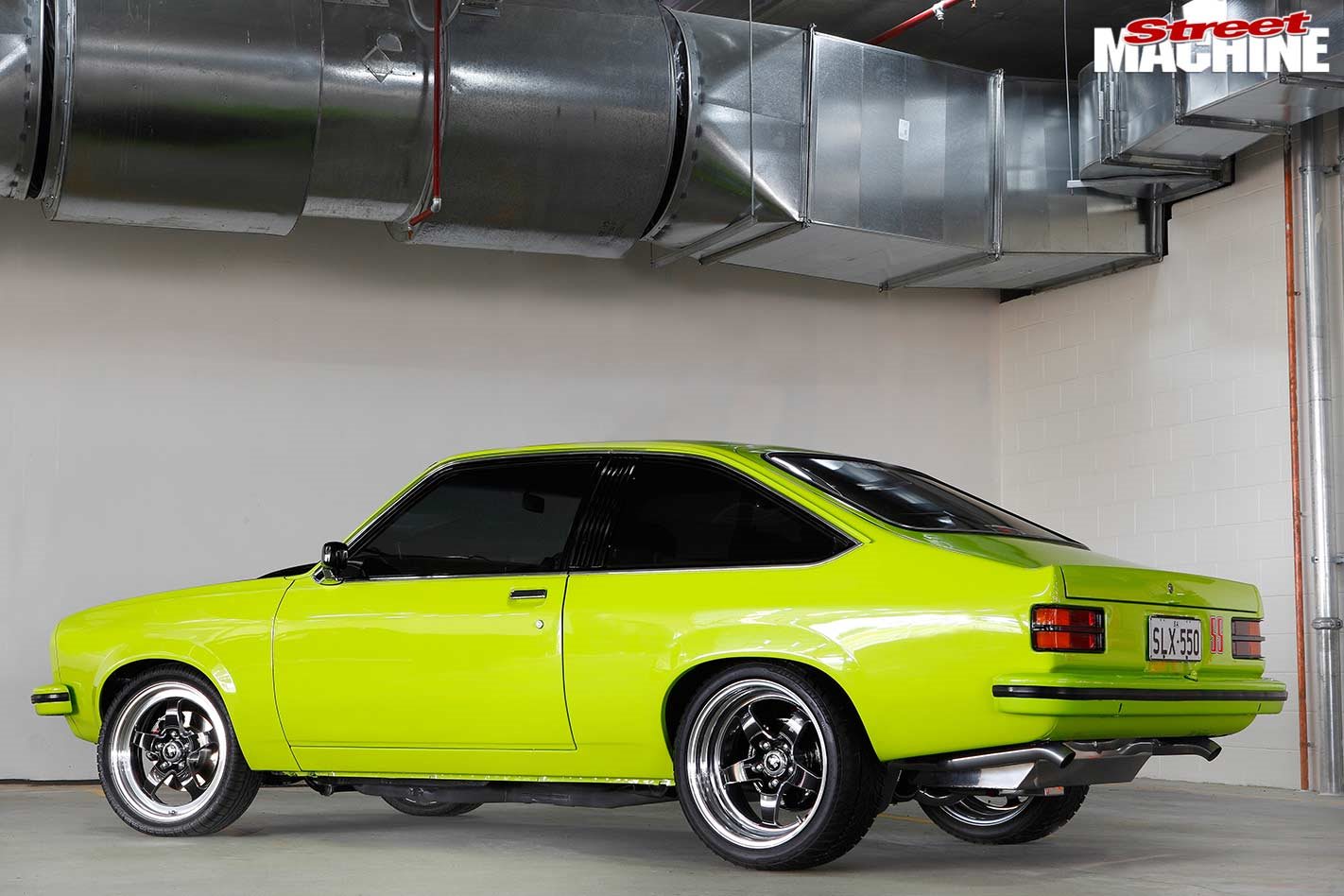 Mark’s hatch rolls on a set of 18in Weld Racing RTS wheels, measuring 61/2in wide up front and 9in at the rear. The sinister black finish is a beaut match for the SS-style blackouts on the car

With the fundamentals seen to and the bay draped in luscious PPG Barbados Green, Mark dropped in the engine and set about decorating it. Billet hardware abounds, including a Bullet timing cover and alternator bracket, CSR water pump and trick Blacks Racks bonnet hinges. The Torque Power dual-plane manifold and Pacemaker headers were ceramic coated, while braided lines and black anodised fittings feature throughout.

Backed by a tough Turbo 350 auto, the engine itself is a 355-cube Holden running a Scat crank and rods and Speed Pro pistons, with a Camtech hydraulic roller (242@0.050 duration) and a set of cast VN heads that have been given a thorough seeing-to by Bullet Cylinder Heads. 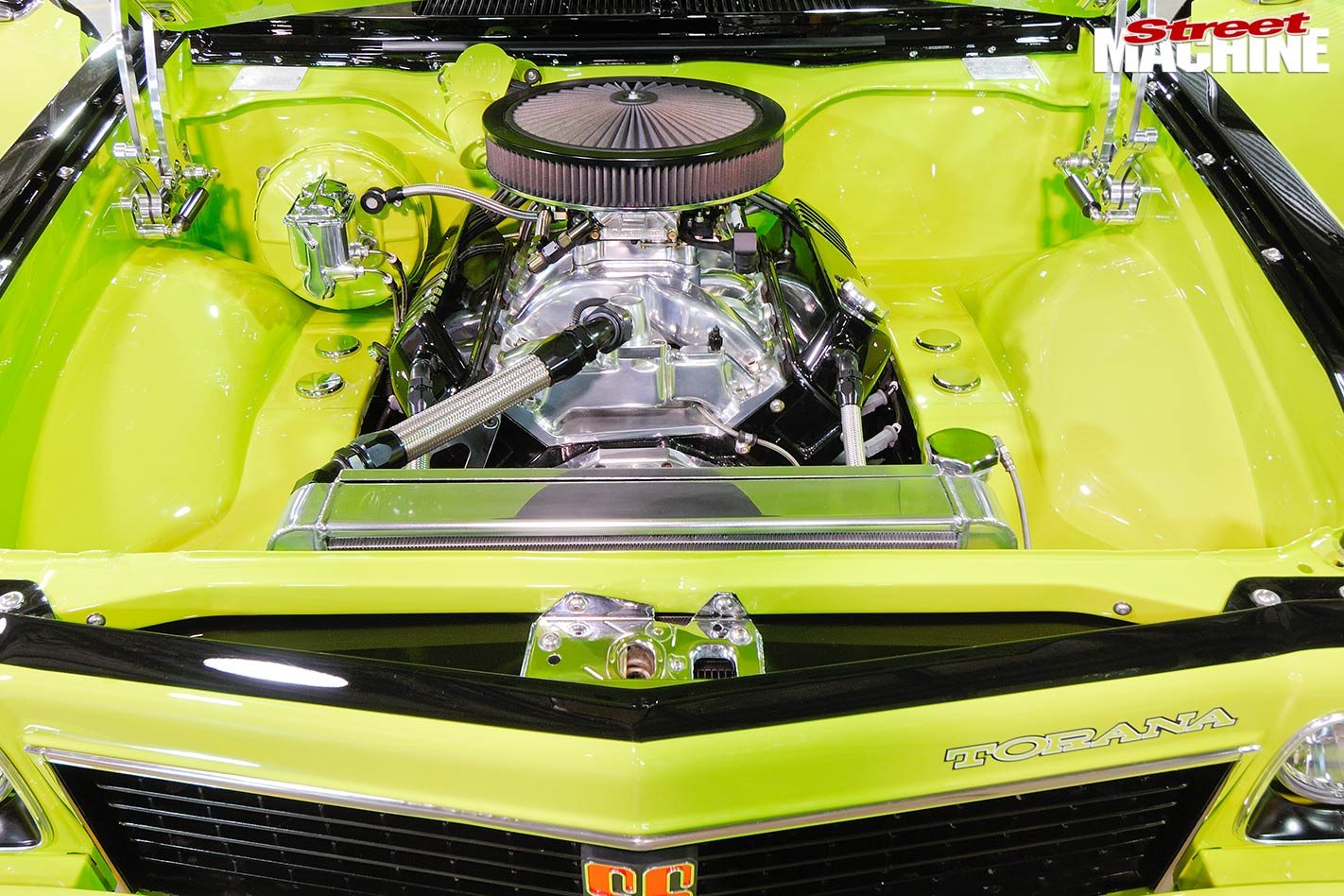 Breathtakingly presented engine bay is the result of many hours of hard slog, welding, grinding and smoothing the sheet-metal, while an arsenal of polished billet dress-up gear seals the deal

It’s good for 375rwhp and has powered the car to a 7.5@94.39mph down the eighth-mile. The diff is the obligatory Ford nine-inch, running 3.7:1 gears and a Truetrac-equipped centre, and it swings on tubular arms, with the uppers being adjustable.

The interior was reconditioned to SS specifications by Dash Original, featuring factory-style slate grey golf ball trim inserts on the seats, and a three-spoke SS twirler. The only deviations from 70s-issue hardware are the B&M Pro Ratchet shifter and Auto Meter instruments, masterfully integrated into the factory hatch console and instrument cluster respectively.

The car was completed in the nick of time — the night before Mark and Alana’s nuptials — and was run in on the day. Since then Mark’s cruised the car, done the rounds of the local show scene, hit the dragstrip and had a crack at the Summernats Elite Hall, with success on all fronts. 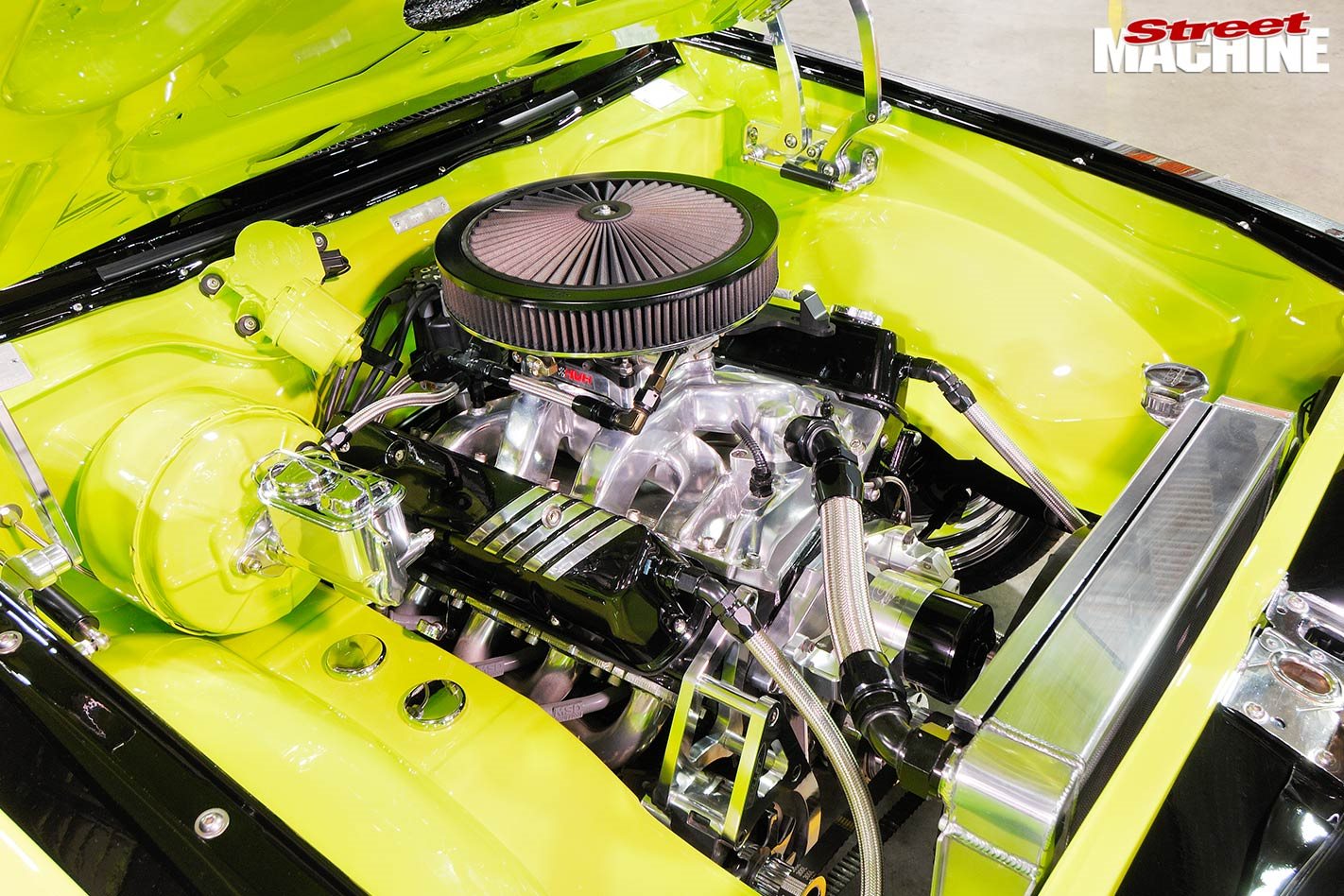 “I’ve entered it in most car shows in Adelaide and collected a lot of trophies, and I’m pretty chuffed because I built it as a street car.

“I took it to the Old Skool New Skool show, where it won Best Car Of Show, and I then entered it at the 2011 Gazzanats where it won King Of The Show. That gave me a free pass to Summernats 25, so I couldn’t pass that up!

“I planned my trip over to Canberra to have some fun and enter the Street show ’n’ shine. When I was going through scrutineering they suggested that I should try for Elite. I was hesitant at first but I did it and the car placed in the Top 60.”

Despite the impressive accolades, the show world hasn’t tempted Mark to abandon his original intentions for the car, and he maintains that this is one Torana that will always be driven. 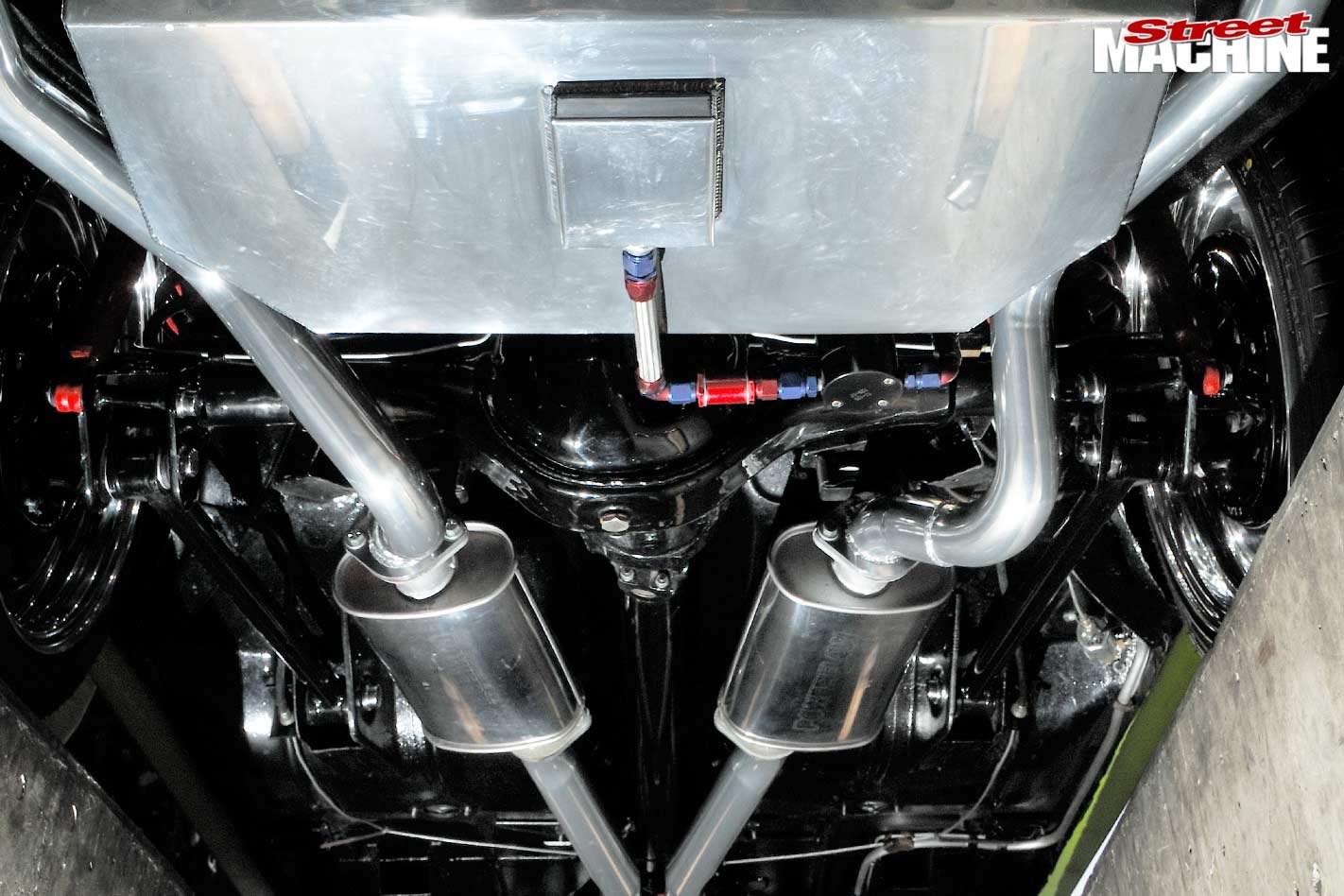 “Obviously once you collect a few trophies, it motivates you to go hunting for more and I’m always on the lookout for ways that I can improve the car. I’m considering a colour change and I might get a bit more serious with the undercarriage but the big thing at the moment is the new engine.”

Yep, as fun as the show scene has been, dabbling in drag racing has left Mark lusting after more grunt. After we bagged these photos, he yanked the engine to repair a minor oil leak, one thing led to another and it was pensioned off to a buddy who fitted it to his LJ.

Set to replace it is a more far more serious donk, with a COME 383ci stroker crank, forged slugs and Yella Terra dash-9 alloy heads that have been ported and polished by Bullet. In keeping with his goal of building a low-maintenance street car, Mark went with the biggest hydraulic roller cam he could find, while 11:1 compression is happy on pump fuel. 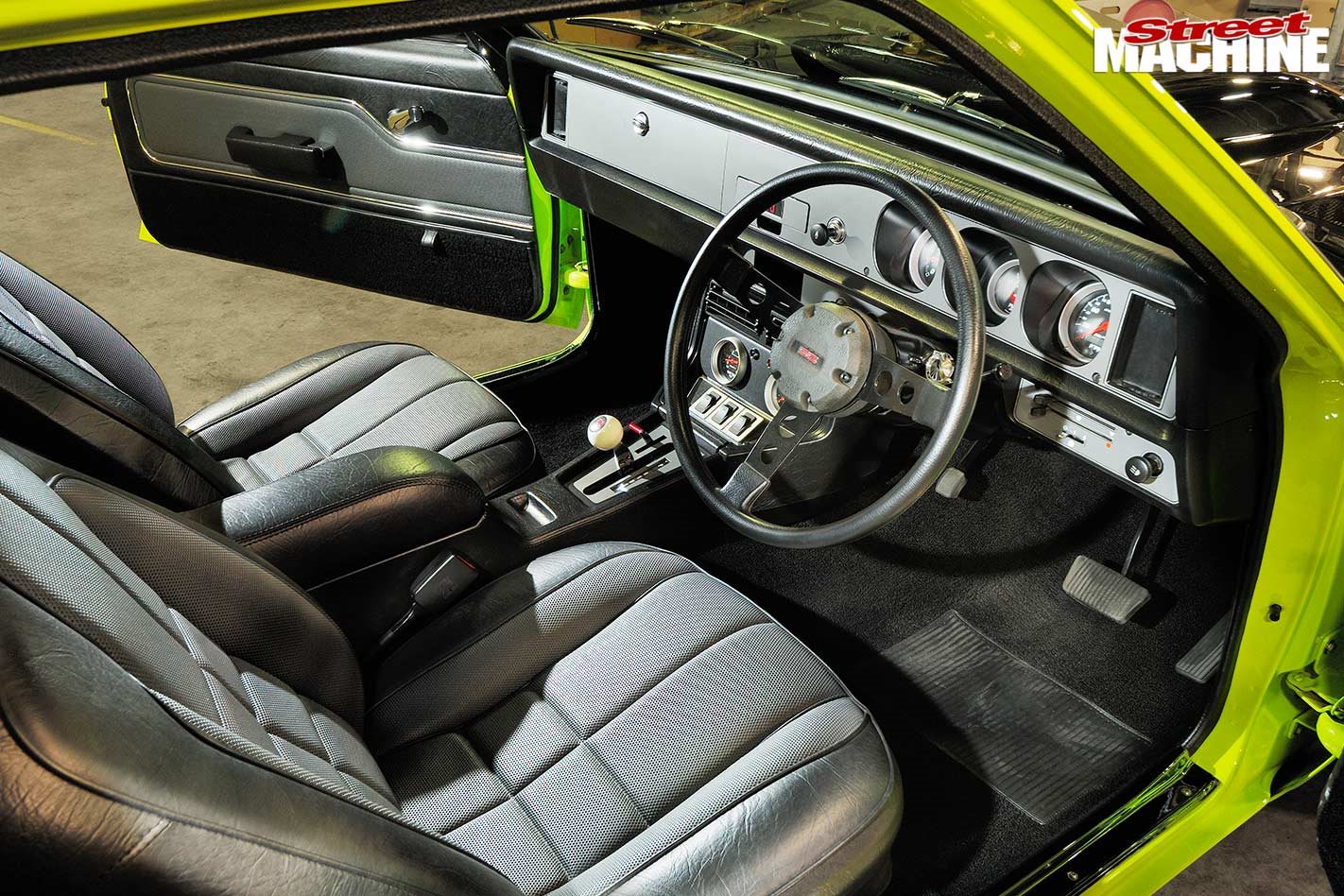 Immaculately restored SS interior is just like stock, only better

The new engine is good for 525hp and 500ft-lb at the crank, and by the time you read this, Mark will have the new combo in the car at Summernats 26, where he’s aiming for some fun and a crack at the Street class judging.

“By the way, I never ended up getting a new couch. But hey, the car shits all over it!”

THANKS
My wife Alana and my little girl Alyzah for all their support; my dad, Daryl, and Nick from Diesel Exhaust Systems; Dave from David Lee Race Engines, Raun from S&B Auto Elec, Ben from Dash Original, Anthony from Speedy Brakes, Marcus from Bullet Cylinder Heads, Aaron from Outlaws, Jeff from Jeff Rundle Window Tinting, and my mates Zac, Mike, Jeff & Jimmy for giving up their time after work