This feature story on Simon Kryger's INOCNT LX Torana SL/R was originally published in Street Machine before the car was wrecked in a traffic accident in May 2011.

TAKE a long hard look at Simon Kryger’s INOCNT LX Torana. This car is a weapon of epic proportions. Powered by a nitrous-fed 555ci motor, this wolf in sheep’s clothing is currently punching out more than 1300hp and is the first Modified Street Blown car to break into the seven-second zone. It is without question one of Australia’s toughest street machines.

But the story behind the car and its accomplishments is more than a list of go-fast bits. It’s about passion, desire and a lifestyle revolving around one man’s need for speed. 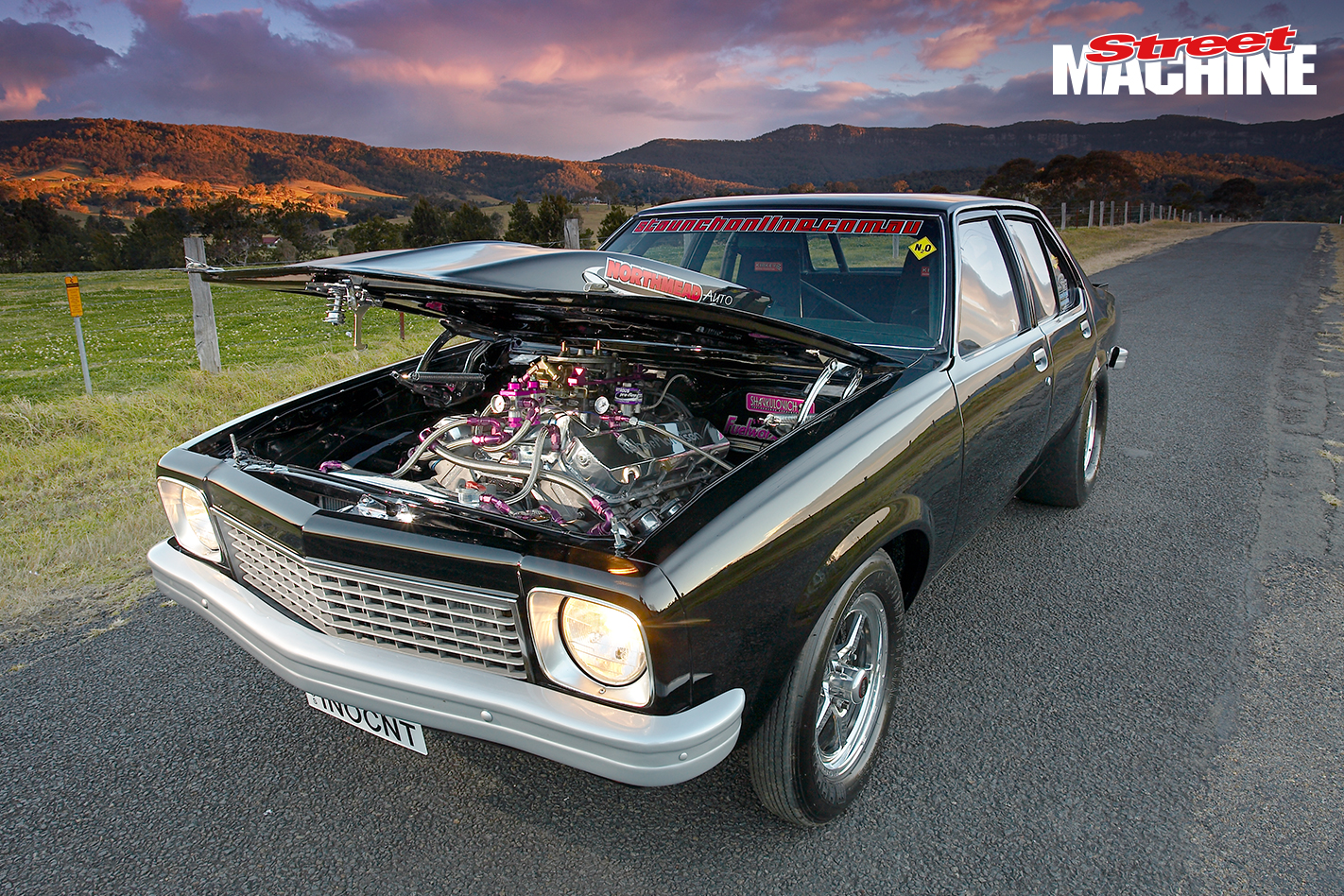 For the 35-year-old plant mechanic from Wollongong — and his family — it’s taken much more than tens of thousands of dollars, hundreds of race meetings and countless hours in the shed to become king of the roost in Modified Street Blown, one of Australia’s premier Pro Street classes. It’s no flash in the pan, either — Simon’s addiction to the nitrous bottle goes back 10 years, though not always with this car.

In 2001 his 408ci Chev-powered LJ Torana — also wearing INOCNT plates — grabbed the front cover of our September issue. Back then he was running 8.96@150mph. Six years later he’s pulled almost a second off that time and added 20mph to his terminal mph with this stunning LX. 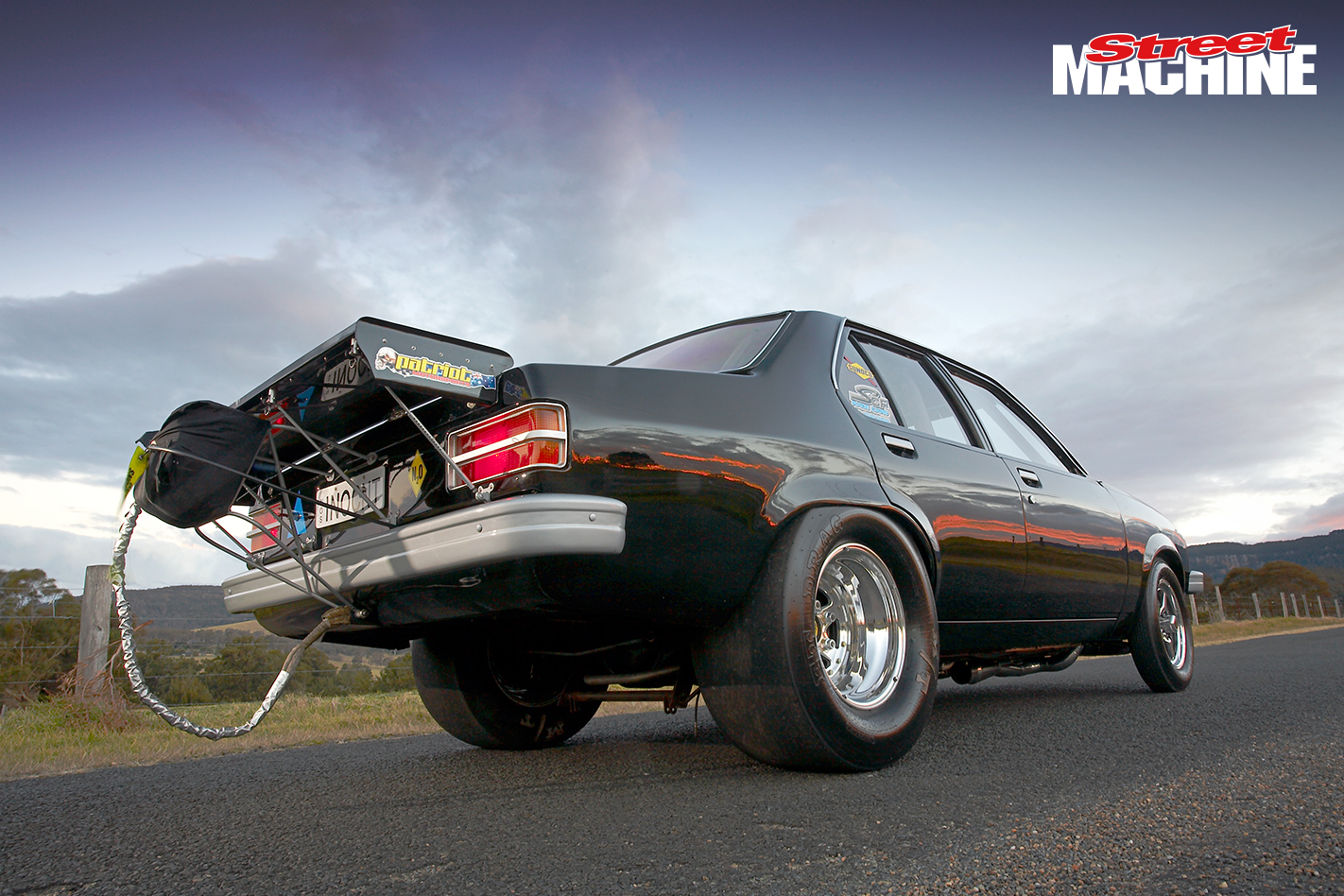 Okay, so this car’s not 100 per cent street legal but pull the parachute and wheelie bars off the back and it would pass for any other Torana out on a Sunday cruise; the paint is schmick, the interior’s tidy, wheels are modest and it behaves somewhere in between Dr Jekyll and Mr Hyde.

Like any success story, this is the culmination of ambition, persistence, surrounding yourself with the best people and parts, and a desire that goes beyond the usual level of sport-related commitment.

Take a look around this car and you will only spot the best of the best. Every aspect has to address three major issues: weight, reliability and performance. The schmick detailing is pride, and it’s attention to detail, on all levels, that separates winners and losers. 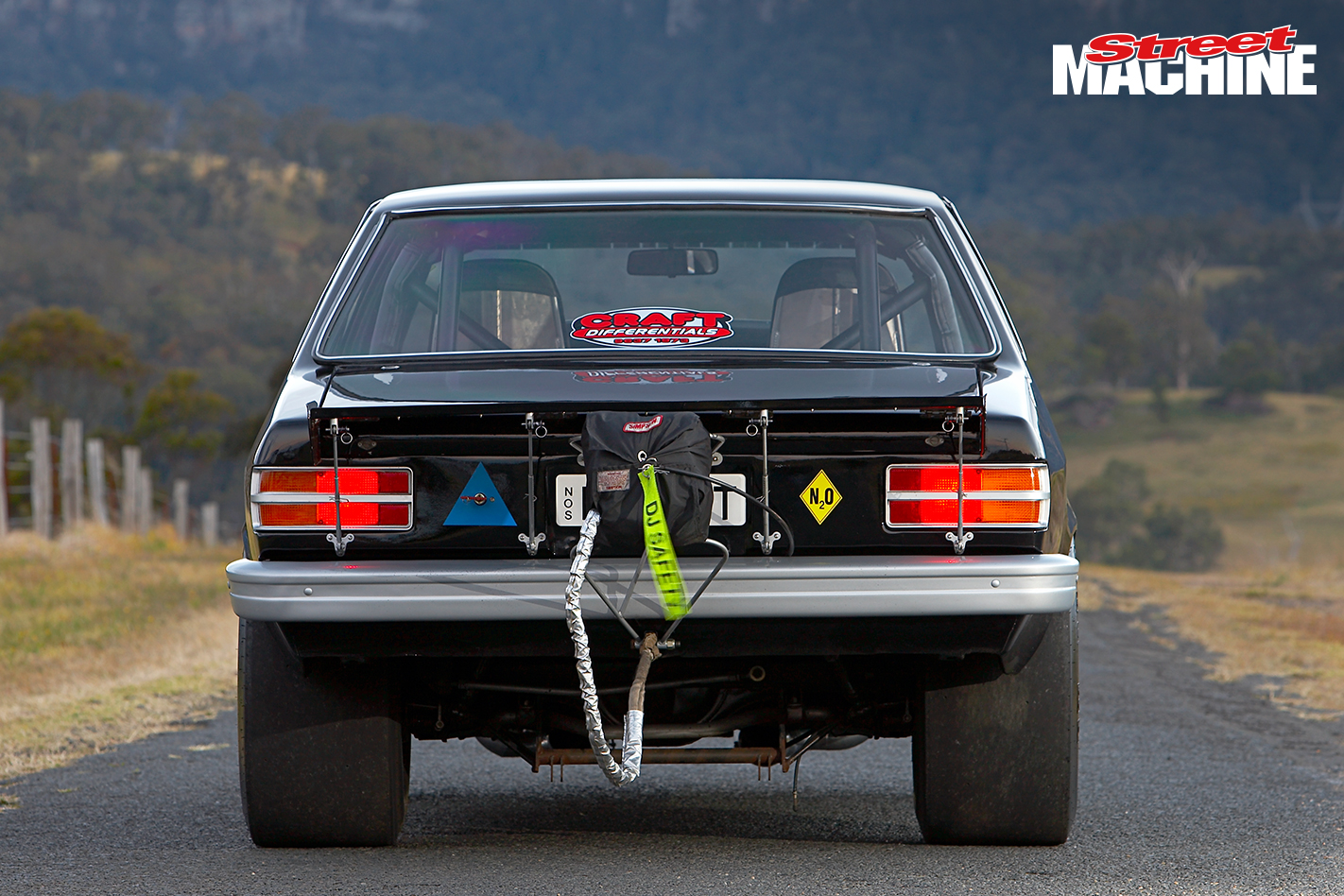 The engine is a serious piece of work. It makes 940hp aspirated and was built by Sydney transmission and engine guru Norm from Northmead Auto Centre. With more than 250 passes down the strip, the motor has never suffered a single injury despite Simon and Norm’s incessant attempts to jam more nitrous into the combo.

‘Some is good, more is better’ is certainly a well-used tuning guide here, though commonsense always prevails.

As MSB class rules only allow the use of one pair of solenoids (one for fuel and one for nitrous), they need to flow enough horsepower to make the car competitive against turbo and blown machines. Simon uses a Wilson nitrous kit with an electronic controller. With limitations on tyre size, the nitrous controller is the key to launching the car. Simon starts with just 15 per cent on the startline, winding in as much as 450hp over a four-second period. 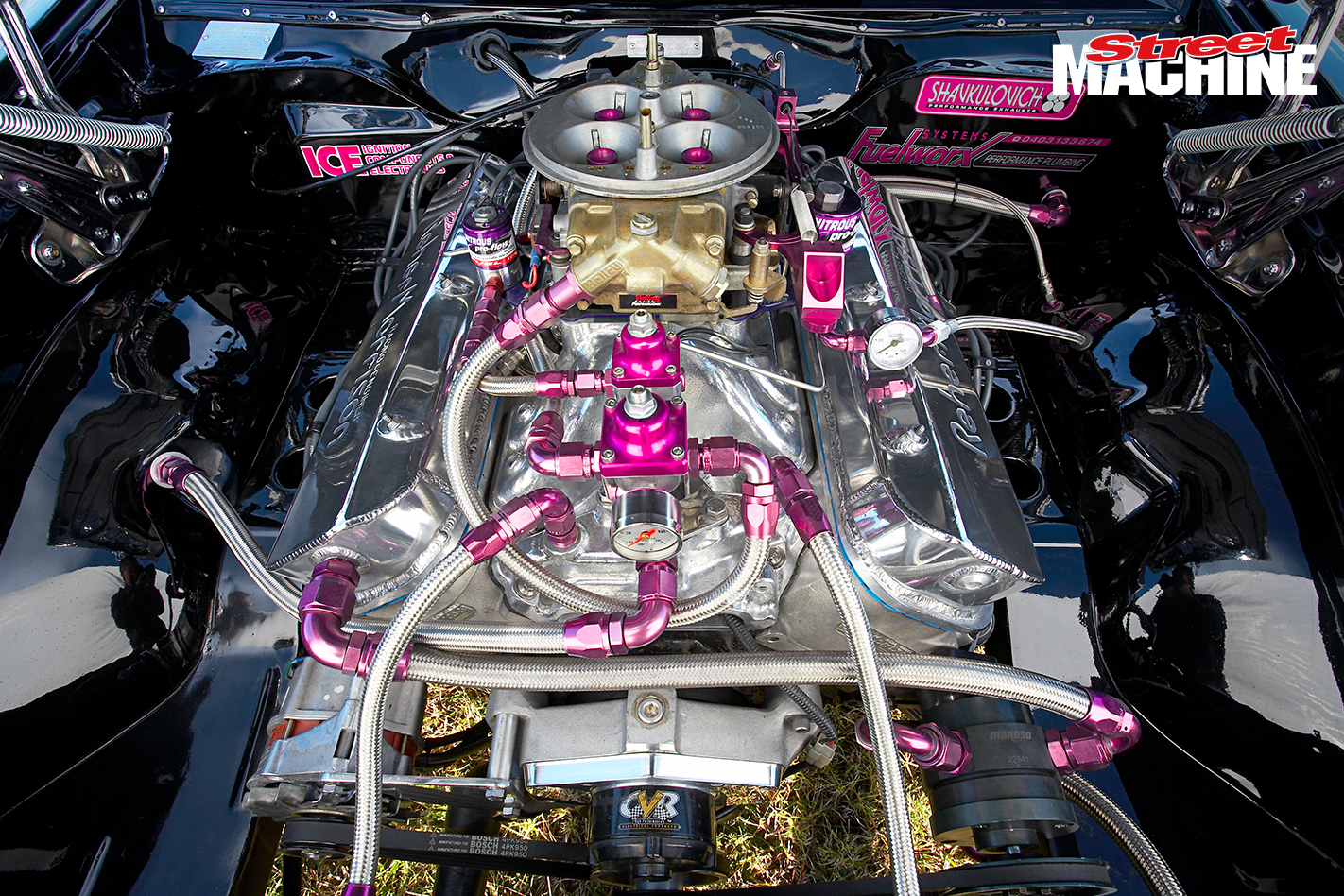 The pipes are equally impressive. Fabricated by local gas-guru John Shafkoulovich, 2¼-inch primaries step up to 23/8-inch before flowing into four-inch collectors.

The transmission is a Powerglide (also by Northmead Auto Centre) with a Dedenbear case, 1.65:1 first gear ratio and a straight-cut planetary set. A 10-clutch top-gear drum replaces the stock item, and other bulletproof accessories include a roller extension housing, ring-less input shaft and an 11-inch TCE 3500 stall converter.

Surprisingly, the rear still runs standard-style shocks, though with the addition of an airbag on the driver’s side and a massive 33mm anti-sway bar wrapped around a Ford nine-inch prepared by Sydney’s Craft Differentials. 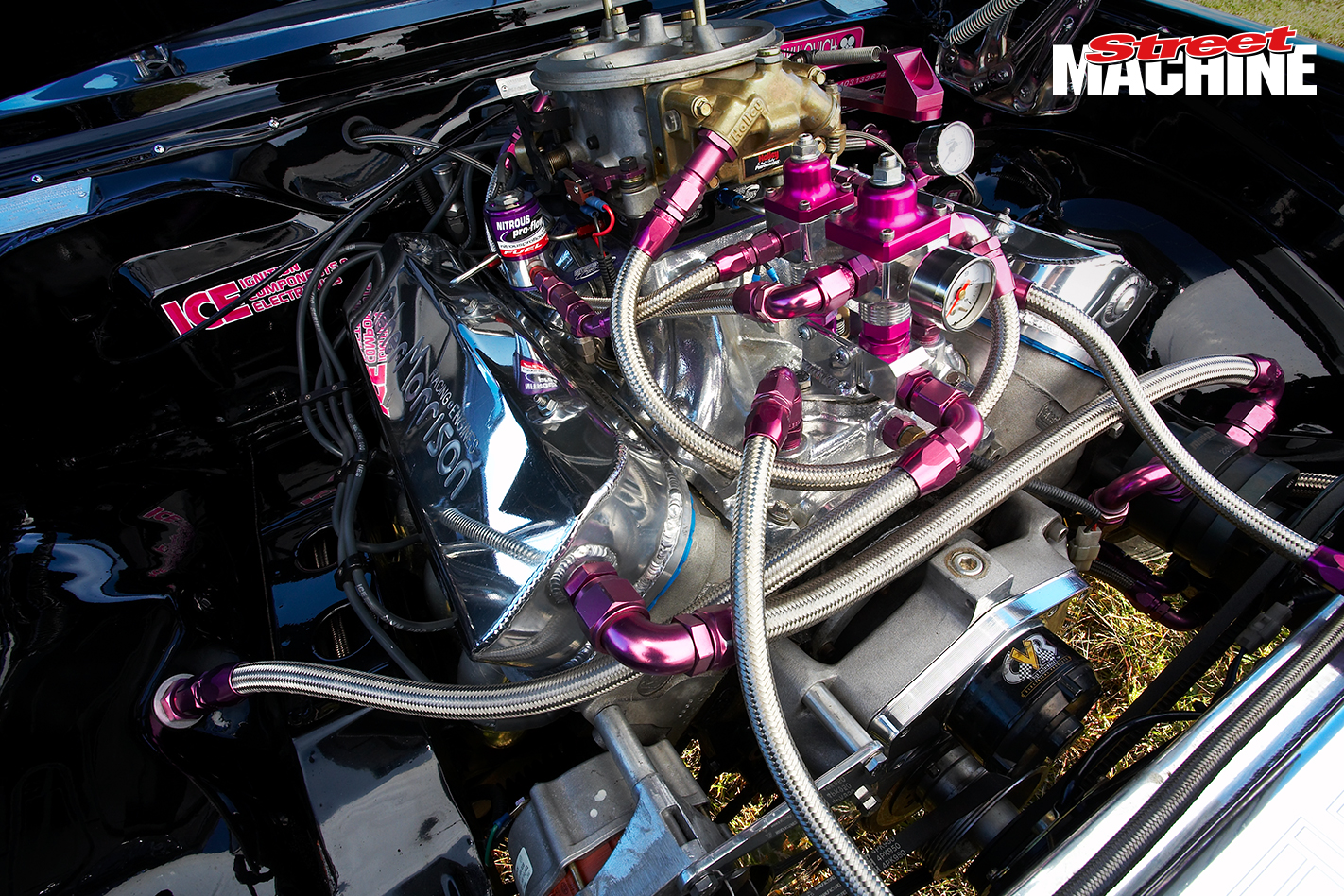 The housing is filled with Mark Williams components, including gun-drilled axles and 3.5:1 Pro Gears, and has a set of HQ drums on either side. For additional strength, the rear control arms have been boxed, there’s a Panhard bar and the valving in the shocks has been changed to 50/50. 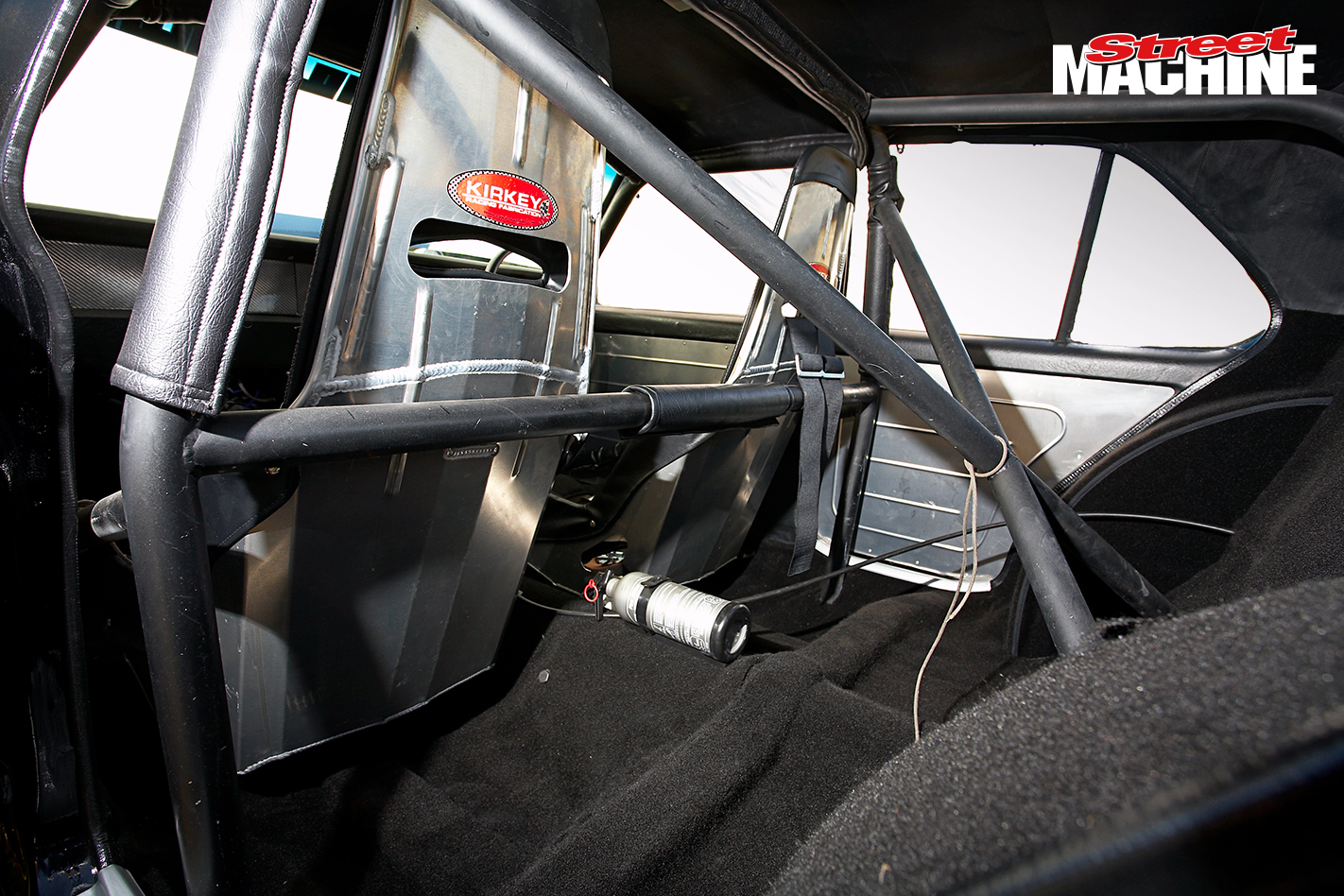 The bodywork on the car is flawless thanks to a recent jam job by Little Johnny. In addition to the fibreglass bonnet, boot lid and bumper bars, all the glass (with the exception of the front windscreen) has been replaced with Lexan, the front scuttle panel’s been filled in and there are wheel tubs and a chrome-moly ’cage fitted.

The interior is simple but neat; black-painted alloy door cards blend with the Kirkey alloy seats draped in Kirkey seat covers. Gauges are all Auto Meter and if it were not for the ’cage with an X-bar tying the rear frame rails together and the parachute lever between the seats, the set-up could pass for a full streeter. 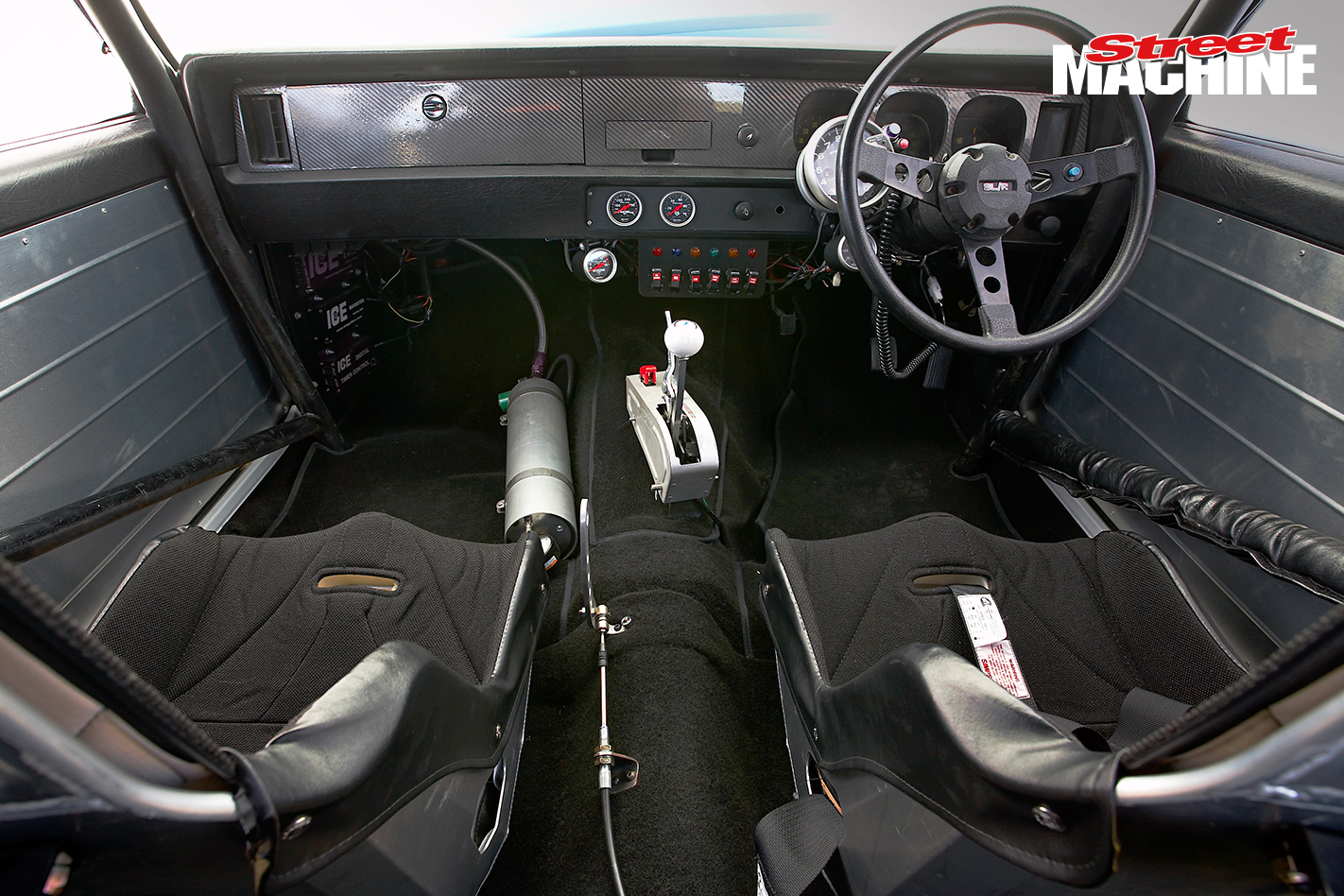 To make more room in the engine bay, a Wilwood brake master assembly has been mounted under the dash. At the rear, the boot is fitted with dual 10lb nitrous bottles, a small fuel cell and a Magnaflow pump to feed the engine and nitrous system.

Ready to race, the car weights 3102lb (1400kg) — that’s including the driver. As mentioned, in aspirated trim the engine makes 940hp; given that weight and the mph it runs, the Moroso calculator says the car’s just on 1300hp when it’s in full anger. 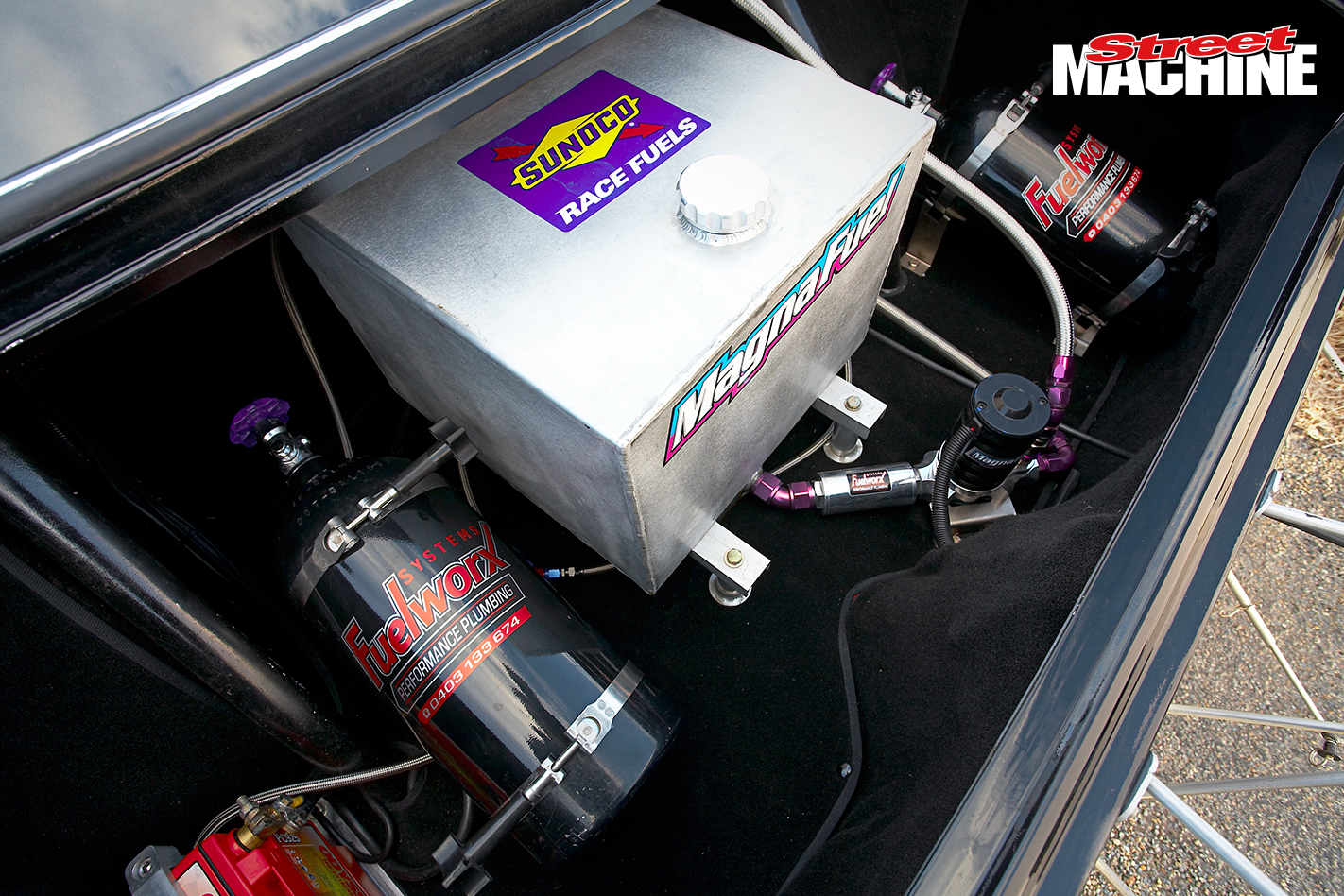 “Tyre size has been the biggest struggle for us,” Simon says. “Instead of running an 11.5 inch tyre we stuck with the 28x10.5. It doesn’t sound like much of a difference but we just picked up two tenths by going to a wider tyre.

“It’s a pretty out-of-control ride and that’s what I love about it the most. The car is now pulling the wheels up for almost 100m at half track so it’s awesome. You just can’t get this kind of ride in any other class. 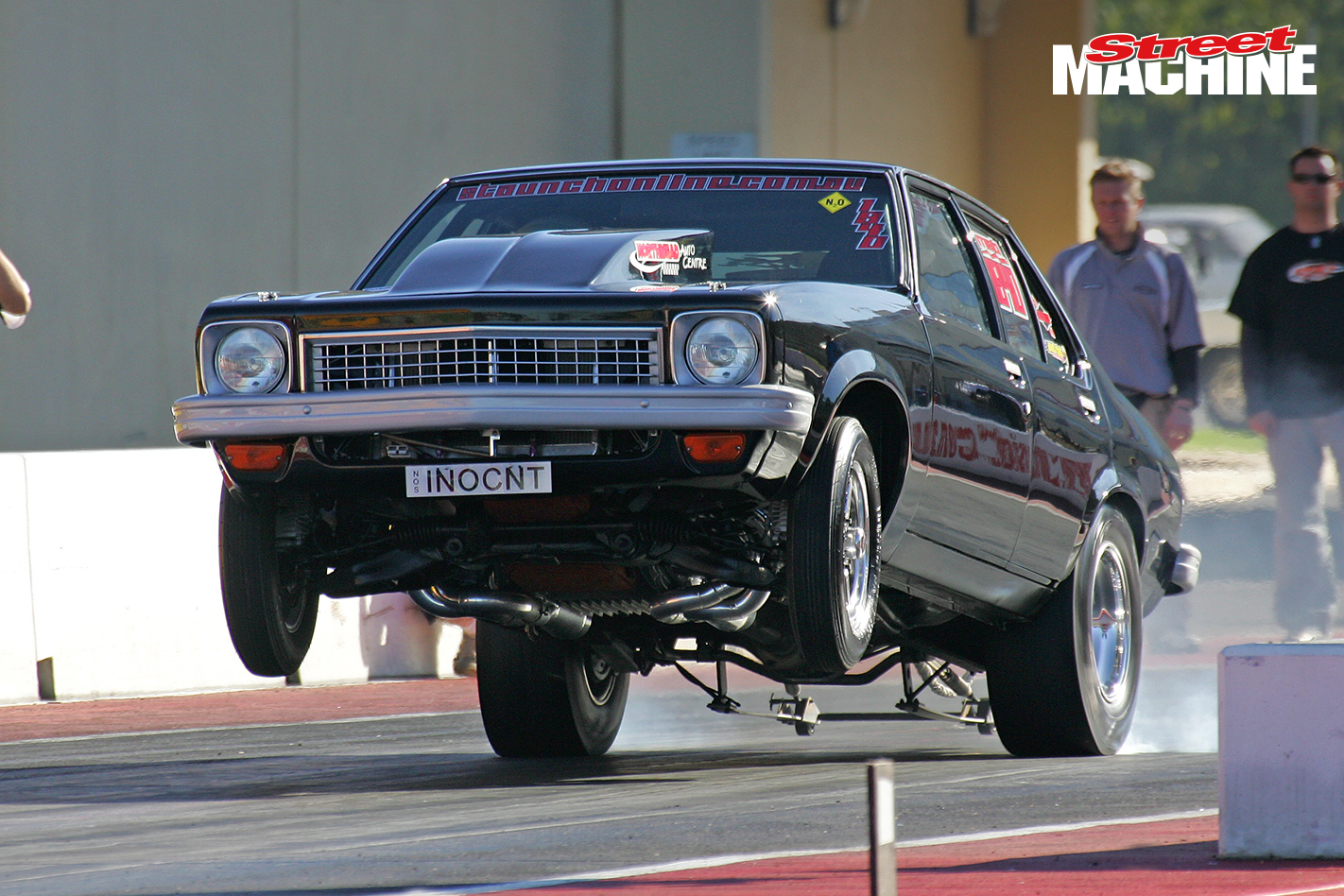 “The whole secret behind this car is the sheer number of passes we’ve done — that’s lots and lots of development. We don’t hurt anything and the maintenance on the car has been minimal; I change the oil every second meeting, ’plugs occasionally, it gets a leak-down after every meeting, we re-tension the heads every six months and every nine months we pull the motor out and check bearings.

“Modified Street Blown is by far the best class. There’s nothing like 170mph on a small tyre — you really have to know how to drive. I do think they need to change the class rules to accommodate Lexan front windows; 170-plus mph with glass just isn’t safe.” 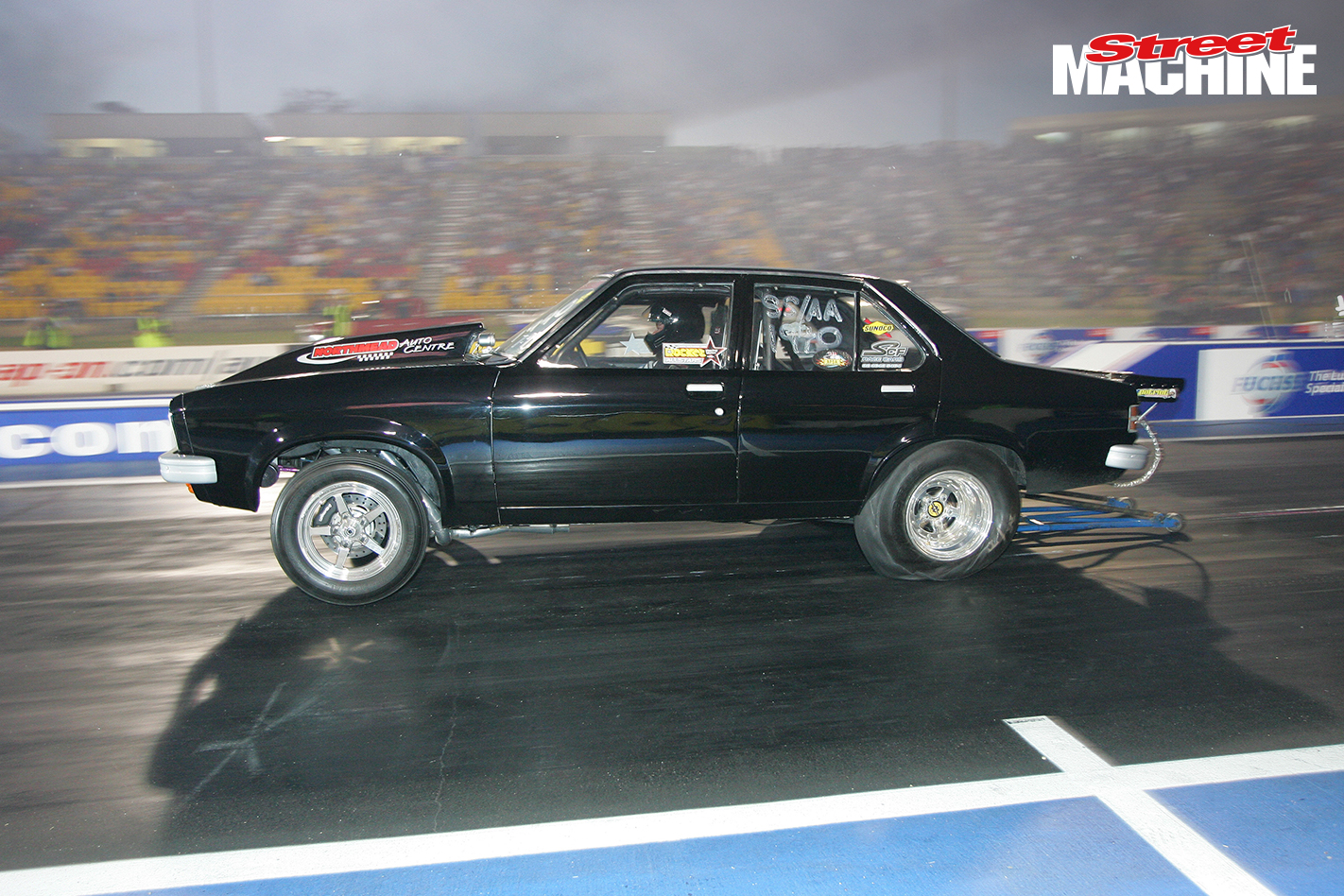 Simon finally cracked the seven-second zone at the Fuchs Nationals at WSID — the final meeting before the engine went to a new home.

INOCNT will now get a 648ci monster mill, with the aim of running the first seven in Modified Street Aspirated. Watch out for it at the Street Machine Supernats!