WHILE it will always be a case of different strokes for different folks, if you haven’t noticed that turbocharged V8s are all the rage when it comes to fast, legal street cars, you probably haven’t been paying much attention. 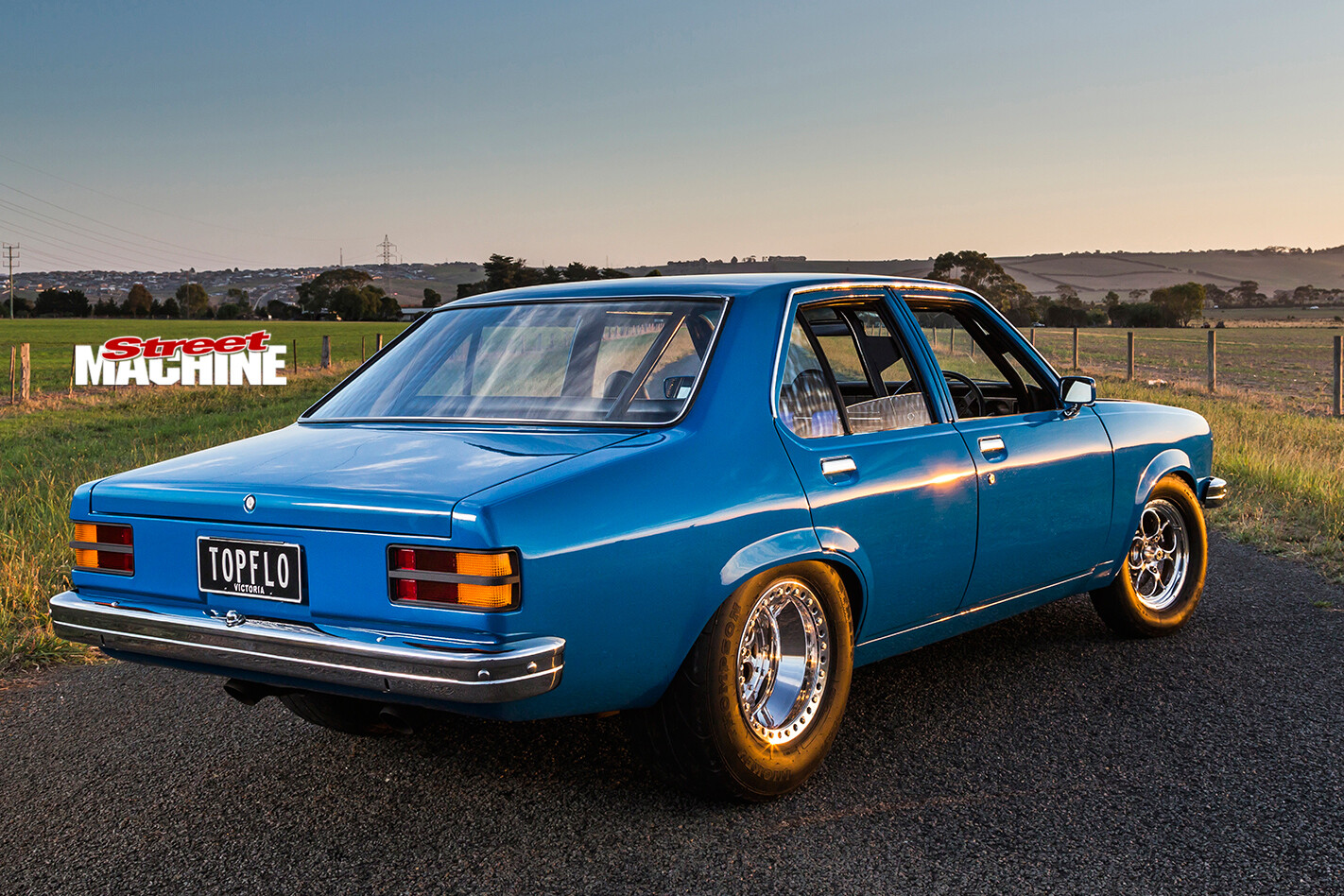 The pointy end of the field at both Hot Rod Drag Week and our own Street Machine Drag Challenge is populated by turbocharged V8-powered missiles, and that alone should tell you that dangling one or more snails off the side of a healthy bent-eight has become the path to street car righteousness in recent years. 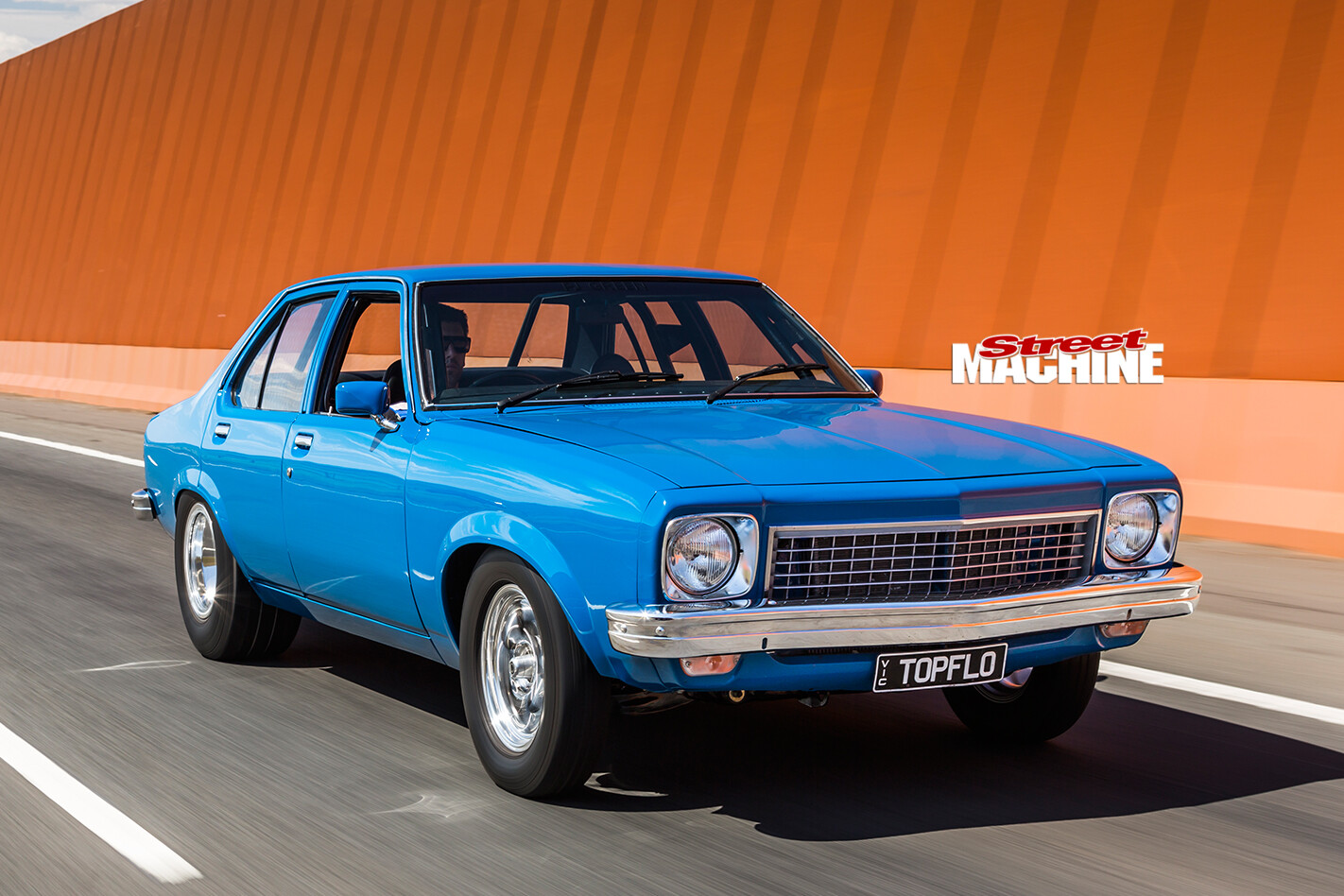 Victorian Luke Green knows this to be true, and he speaks with the wisdom of experience, having slotted a number of different engine combos between the front rails of his clinically clean LH Torana over the years.

“I bought the car as a roller in 1999 to fit an RB30 turbo engine I purchased when I was on my L-plates,” Greeny says. “With some basic home mods it ran 10.50 while I was still on my Ps, and I used to drive it an hour to work and back every day.” When the RB eventually gave up the ghost Luke fitted a balls-out LS1, which served him well, going as quick as 10.6 on pump fuel and proving to be plenty of fun on the street. When he got an offer on the LS combo that was too good to refuse, he sold it to a bloke who fitted it to an early Corolla. The Torana was engineless once more, so when Greeny got wind that the 700hp naturally aspirated small-block from his mate’s LC drag car was up for sale, he jumped at it. The engine was a stout 372-cuber that made plenty of grunt, but it wasn’t all it was cracked up to be. “Driveability and reliability were of course no good,” Greeny says. “The car was in need of a good birthday, so I decided to clean it up and do the V8 turbo thing, which is what I should have done years ago.” The little Chev had been built tough, so once the pistons and camshaft had been swapped out for more boost-friendly items, it was good to go. The engine was assembled by Joe Bertuna and now runs RaceTec forged slugs and a custom turbo-grind solid-roller camshaft, along with a Callies crank and Lunati Pro Billet rods. The heads are 18-degree CNC-ported CHI items with T&D shaft-mounted rockers, and they’re topped with a twin-throttlebody EFI inlet manifold, which Greeny knocked up himself out of an old sheet-metal tunnel-ram. Beautly, it clears the standard bonnet and allows the Torana to maintain a stealthy appearance. 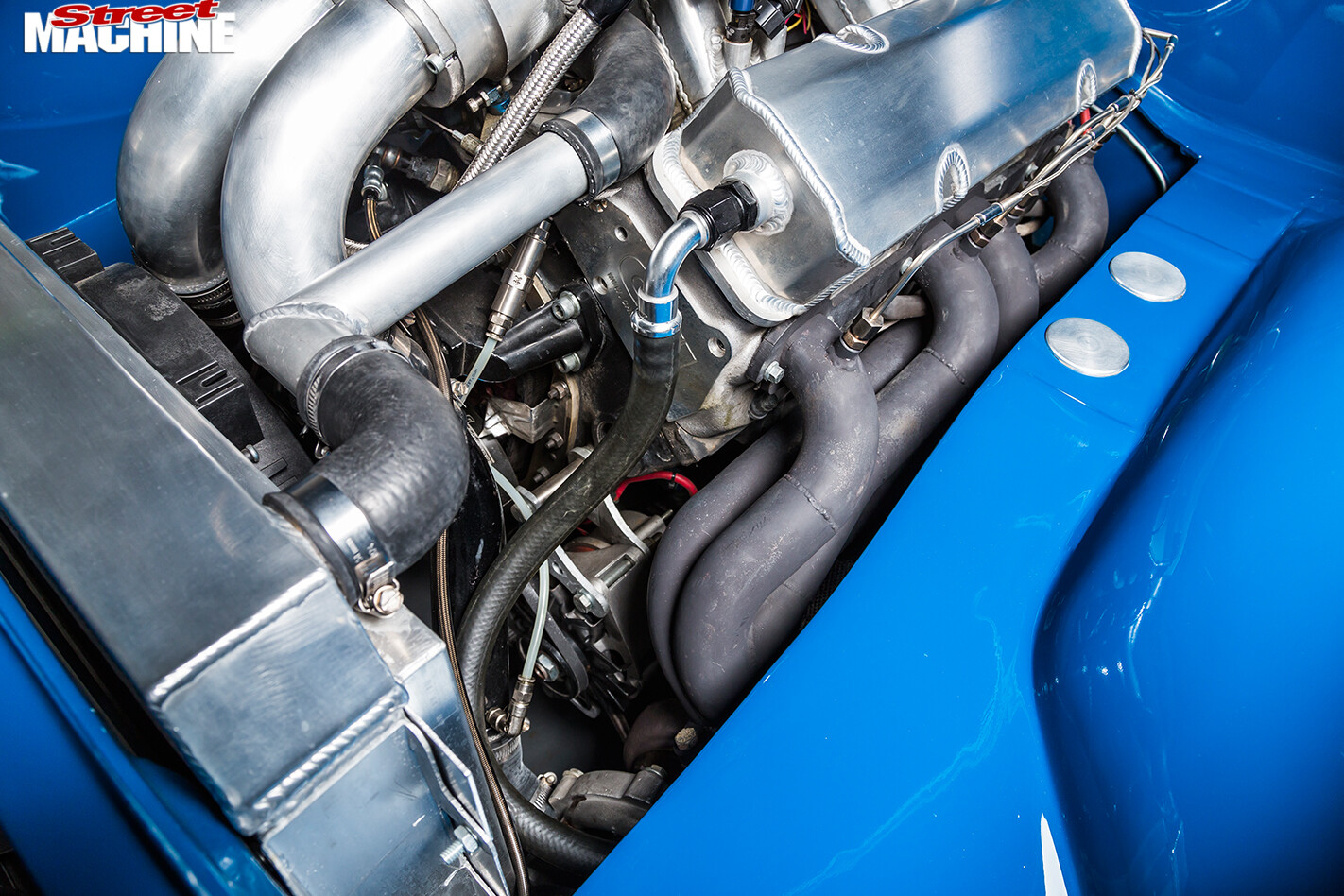 Greeny also knocked up the first set of exhaust manifolds himself, with the twin Garrett Ford XR6 turbochargers positioned up high in the engine bay. But when engine bay temperatures turned out to be a little too excessive for street use, Strop from Moolap Mufflers knocked up a set of low-mount manifolds instead, to reposition the turbos and drastically reduce temps. Probes in the primaries communicate with the Innovate LM-2 datalogger so exhaust gas temperature and air/fuel ratios can be assessed for each cylinder; the ECU is from MicroTech. 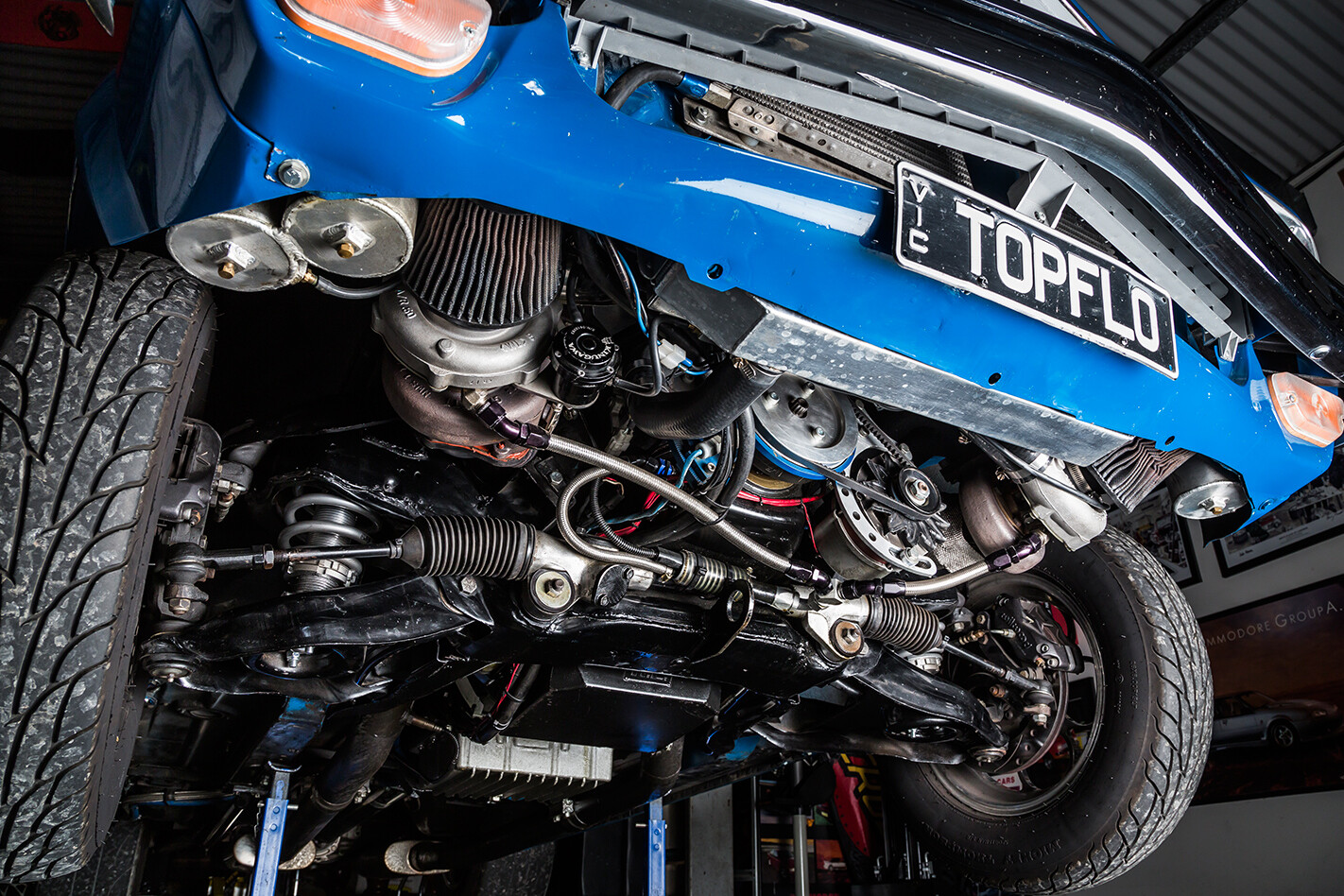 It’s an un-intercooled set-up, with a very effective boost-actuated water/methanol injection system keeping inlet air temperatures to a manageable level. The engine is good for 670rwhp on pump fuel, and Greeny tells us it makes roughly 750rwhp (or 1000hp at the engine) on E85. 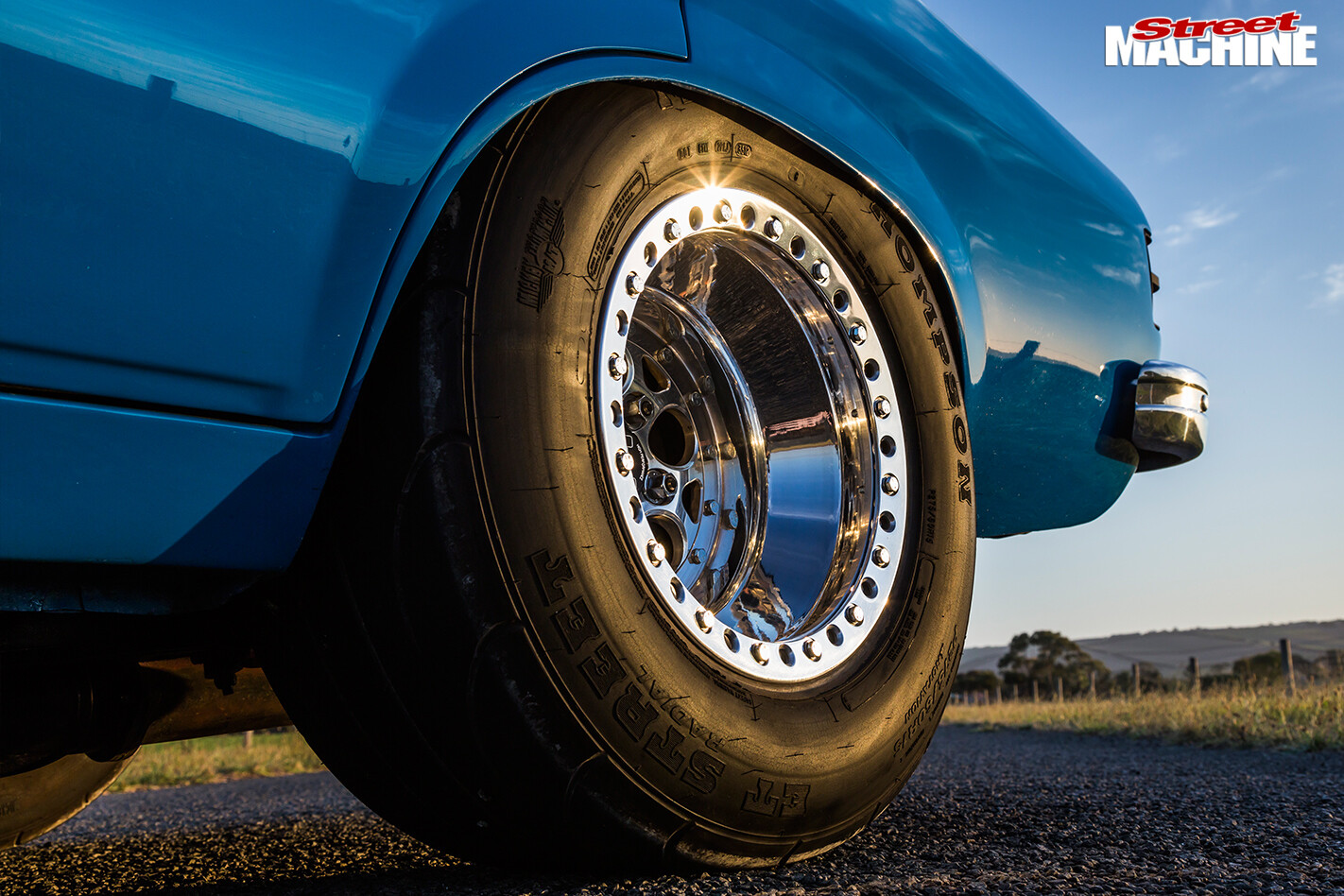 The combo is backed by a Transmission Specialties Reid-cased Powerglide with a Dominator converter, which feeds grunt rearwards via a custom A1 tailshaft with Strange yokes to a nine-inch with a Strange alloy centre, 35-spline axles and full-floating hubs. Running on E85 and rolling on 275/60/15 Mickey Thompson ET Streets, the Torana has picked up the front wheels and boogied down the quarter in a best time of 8.90@160mph. “It’s always done pretty good wheelstands,” Greeny grins. “I was pretty happy to run an eight and if I wound up the boost it would probably go quicker, but I’m happy with that number. As it is I can hop in it, turn the key and go for a cruise with 1000hp on tap. That’s what I wanted to achieve, and that’s what it does.” 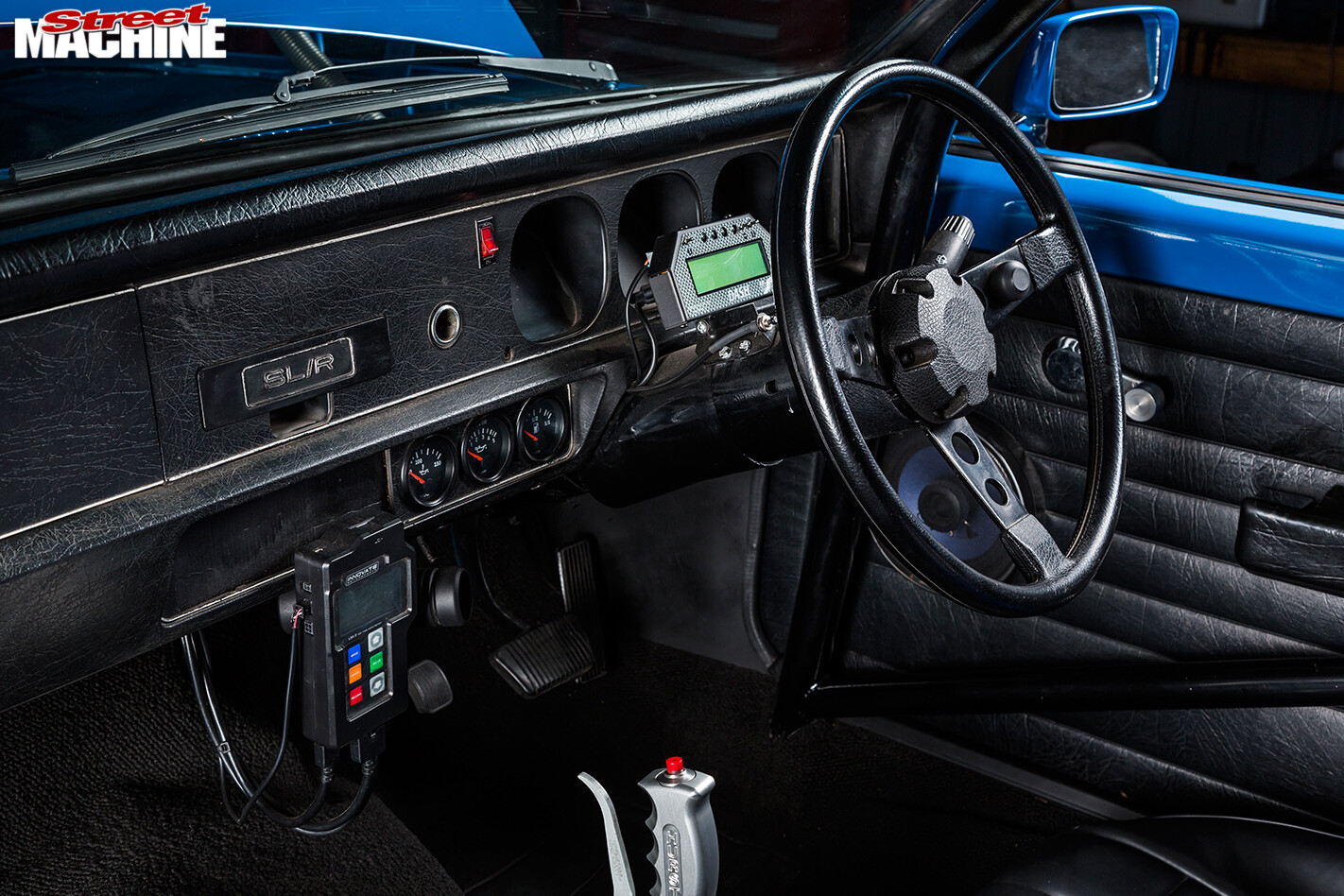 As far as eight-second street cars go, this one’s pretty easy on the eye, too. Mark Drew took care of the car’s bodywork; then Greeny and his dad completed the prep work before SPS Panels laid on the PPG Formula Blue duco. Considering its capabilities on the racetrack, it’s a fairly modest-looking ride, and that’s just how Greeny likes them. “Yeah, it’s great to have a fast car without anything hanging out of the bonnet!” he says. 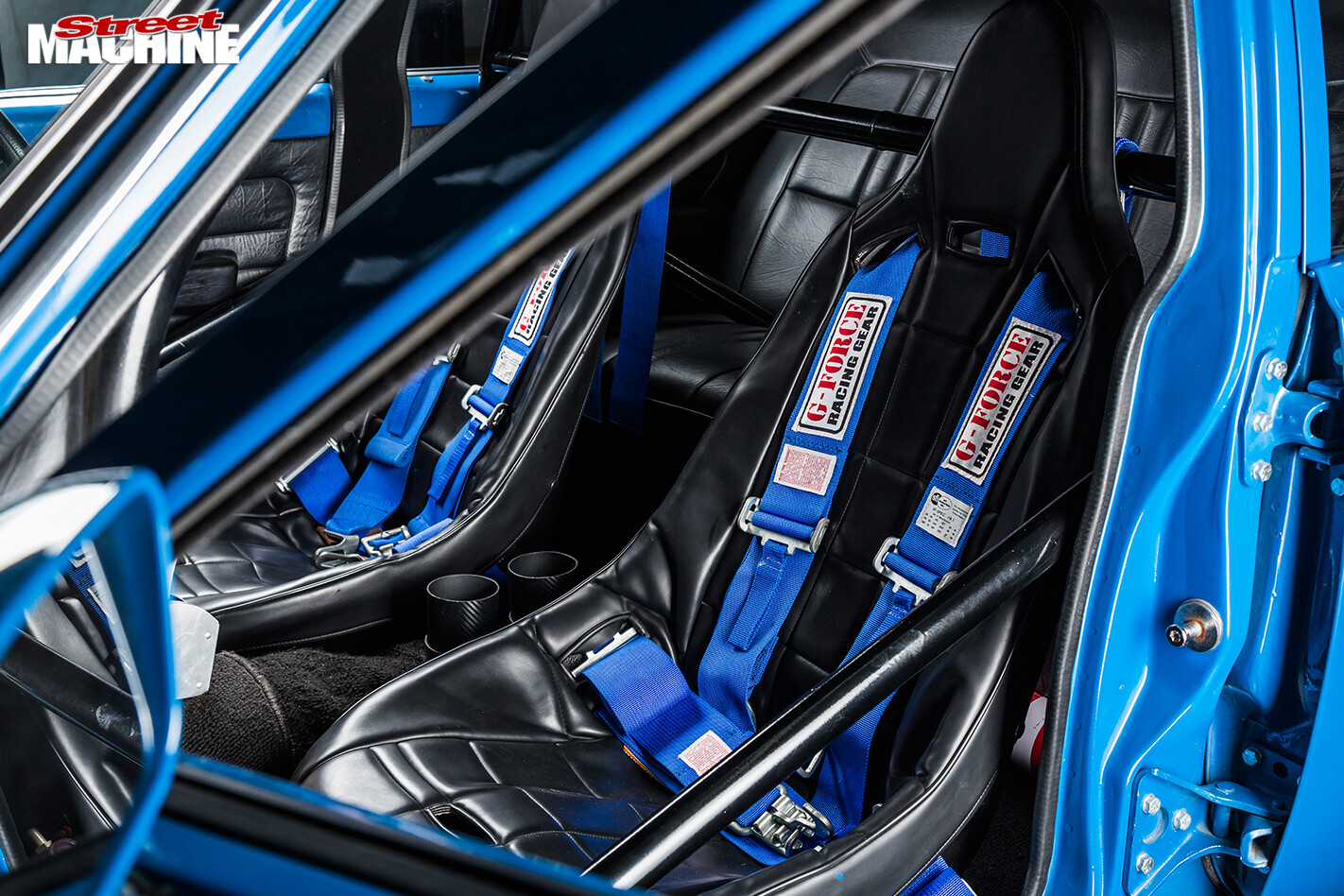 “It used to be real cranky, but now with the turbo engine it’s toned down heaps and it cruises beautifully. I’ve always wanted a 1000hp car that was reliable, and now I have it. It’s been a long road, but a fun one, and I’ve made some great mates along the way!”