DAD gave me an XC GXL when I was 15 years old,” says Jason Waye. “I had it painted, sold and turned a profit before I even learnt to drive.” 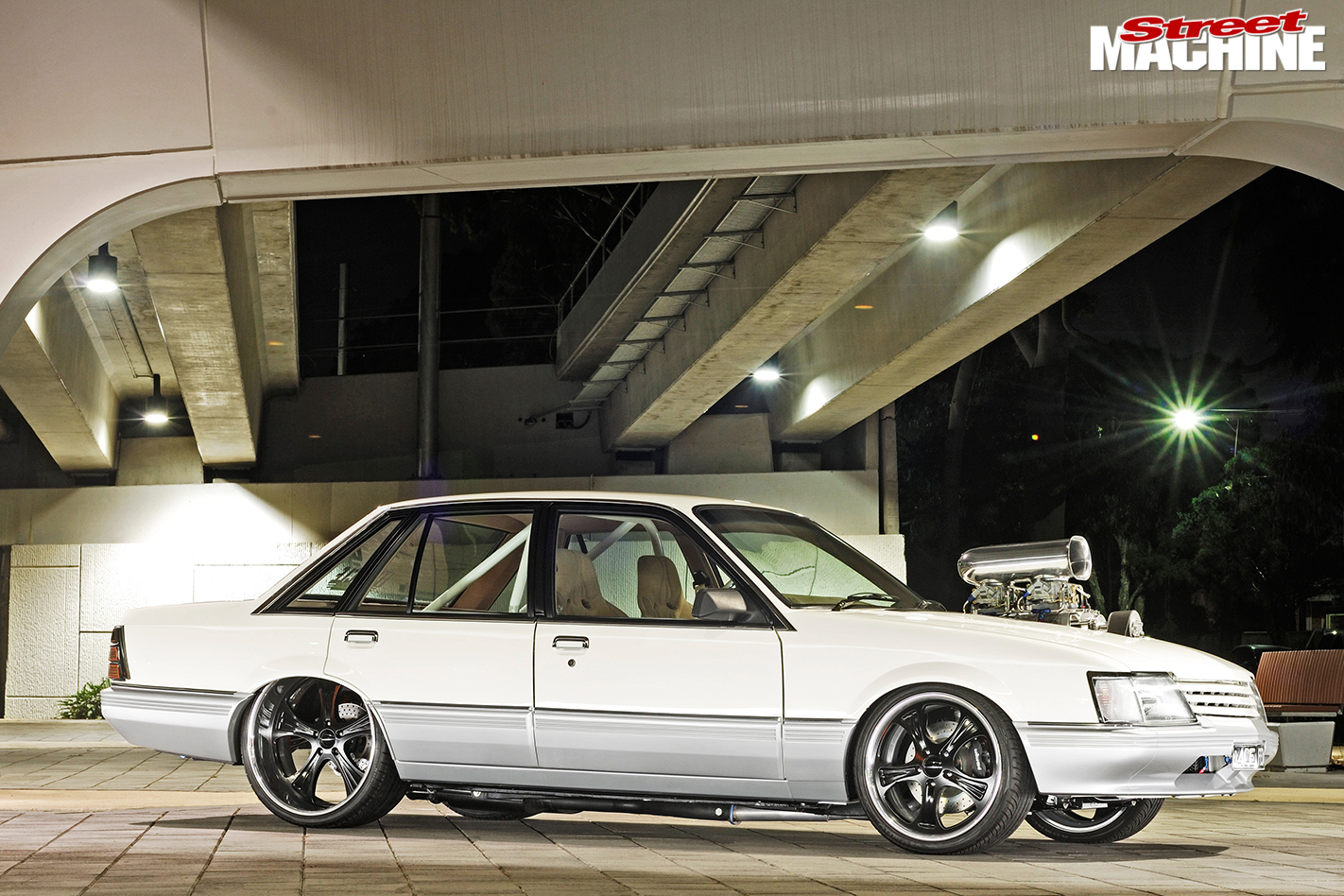 And when Jason’s old man wasn’t handing over keys to free cars, he was running a Holden dealership in Mannum, South Australia. “LC GTRs, GTSs – all the cool stuff – they were normal cars for us back then,” says Jason, who’s grateful for the thorough car-mod brainwashing he got as a kid. “Dad was also a pioneer in country SA, adding mag wheels and body kits. We take that for granted, but it just wasn’t done back then.”

Since making that first turn of profit, Jason has bought, altered and flogged off a fair whack of Lion-badged automobiles over the past couple of decades. Keen-eyed readers may note the car’s 4CEFED number plate, which first graced Jason’s green, flamed, blown HX ute (SM June ’04). Other notable builds include his VK delivery station wagon (aka Deliverance), and his Formula Blue VK Group C replica. 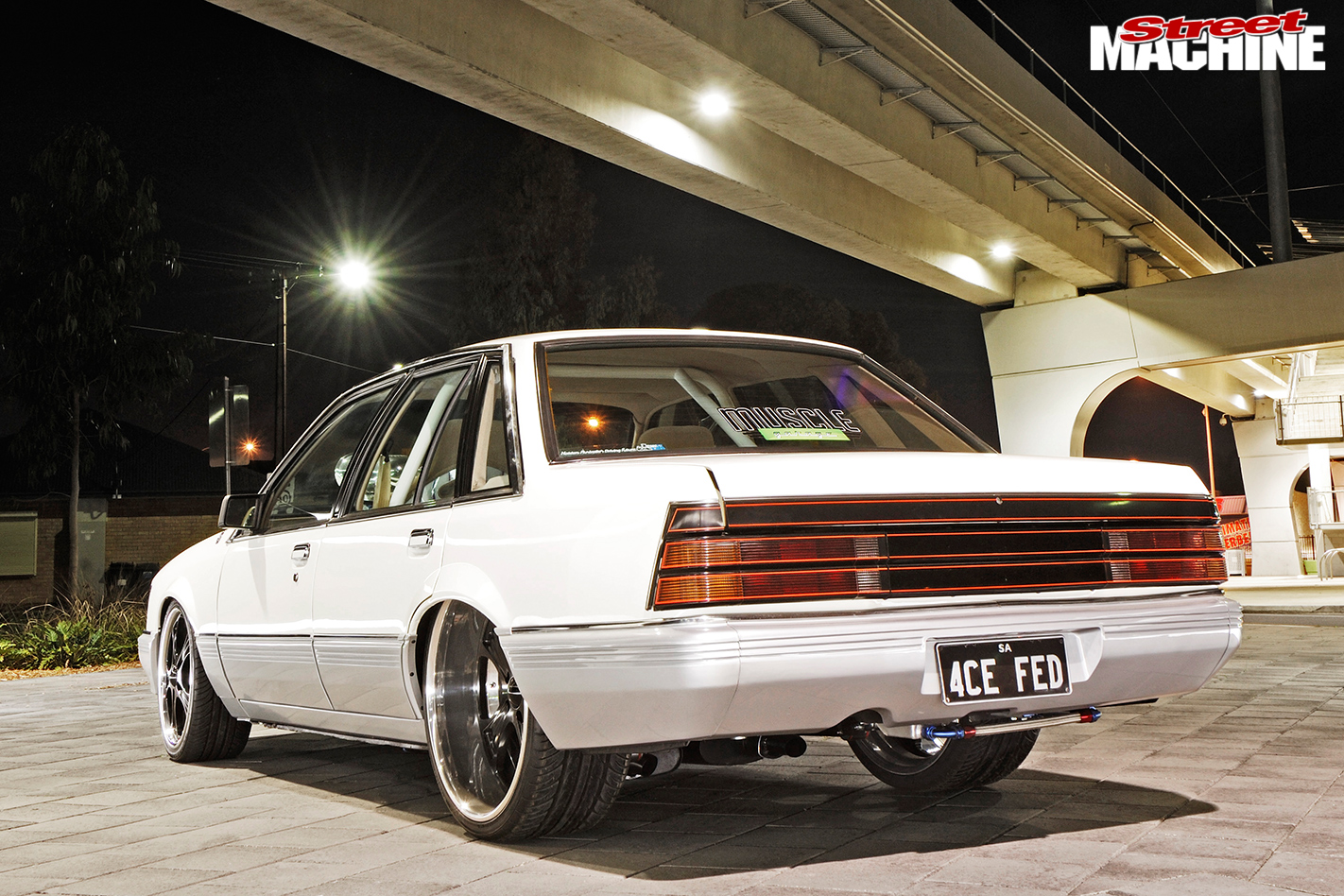 Jason’s penchant for early Commodores has continued with his current build. “Back in 2006, Powercruise Adelaide was a goer and I wanted to rock-up with worthy ride. Initially I was going to build a Pro Tourer; factory-look but with mechanical injection, a Holden driveline, tubbed rear and all street legal.”

A quick internet search delivered a suitable chariot by way of a VK Calais. Straight-up the VK copped an upgrade to handle the proposed thrashing. Engineer Doug Potts was consulted for street legalities while the car was shipped off to Peter Brown at Donegal Engineering to whip up a rollcage, ¾ chassis, tubs and a four-link. But as Peter’s welds cooled, it was evident that Powercruise SA wouldn’t see the light of day. And neither would the VK. “I lost interest thanks to the lack of Powercruise and drag racing, the sale of my business, and not having any use for the car,” says Jason. 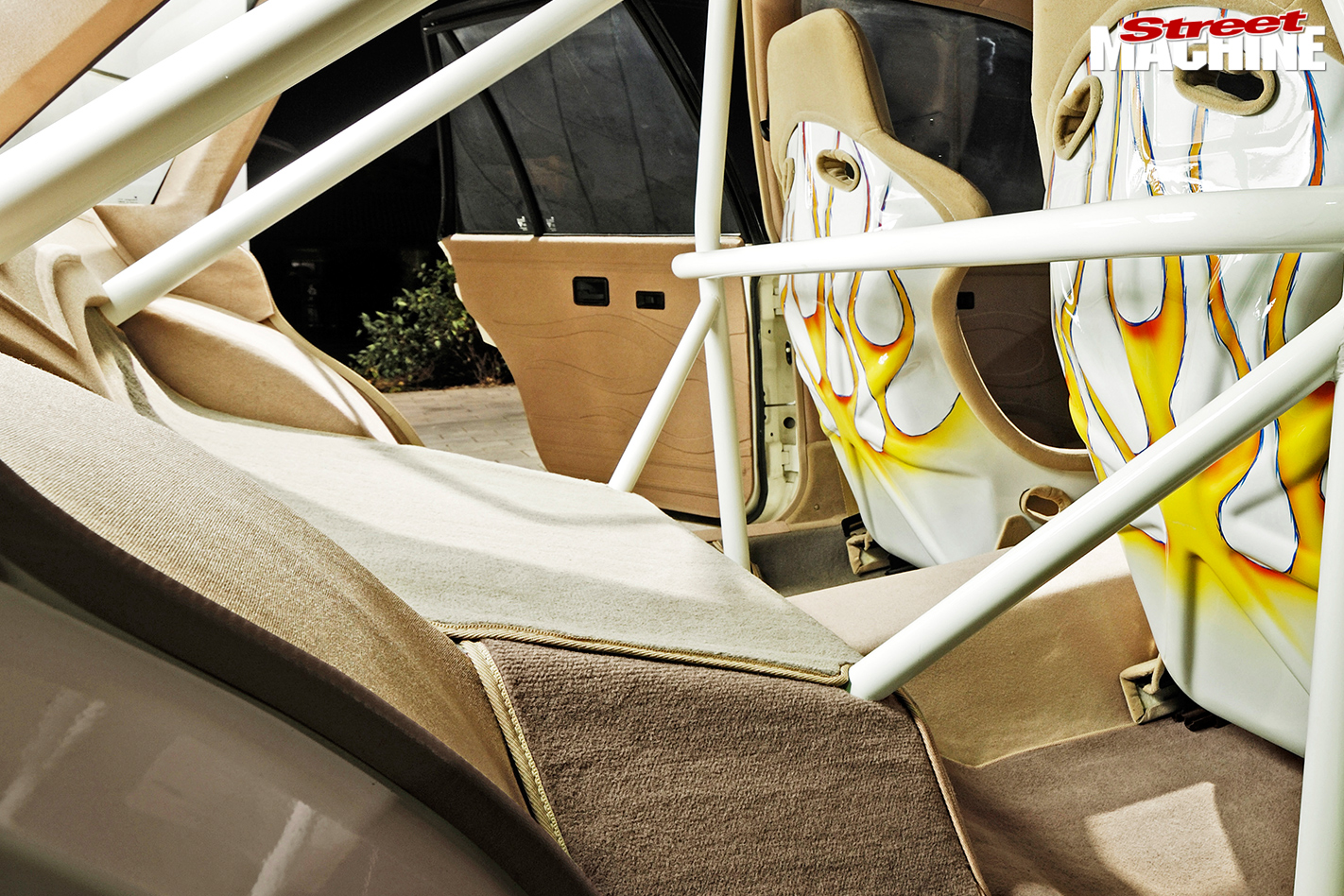 He tried to flog the Commodore a few times, but cashed-up buyers were thin on ground, so he parked it in a corner of the shed where it stayed for a long time. On a nearby shelf sat a 6/71 blower – a swap meet purchase from a few years prior. Sure enough, one thing led to another. “After a few years I finally decided to build it as a show car with a blown engine,” he says. “I had a suitable motor already built so I bought a manifold and it was done.” Street-legal use was shunted from the list of priorities as a new guise began to take shape.

Scott Lang at Kustom Body Works, Lonsdale prepped the mid-80s canvas, including smoothing the ’bay, removing the sunroof and deleting the filler cap. Next, Quality Crash gave it a lick of PPG in the VK’s original Alpine White with lower silver hue.  Later, Dave Crispin Crash was entrusted with touch-up honours, as well as bonnet and rim colouring. 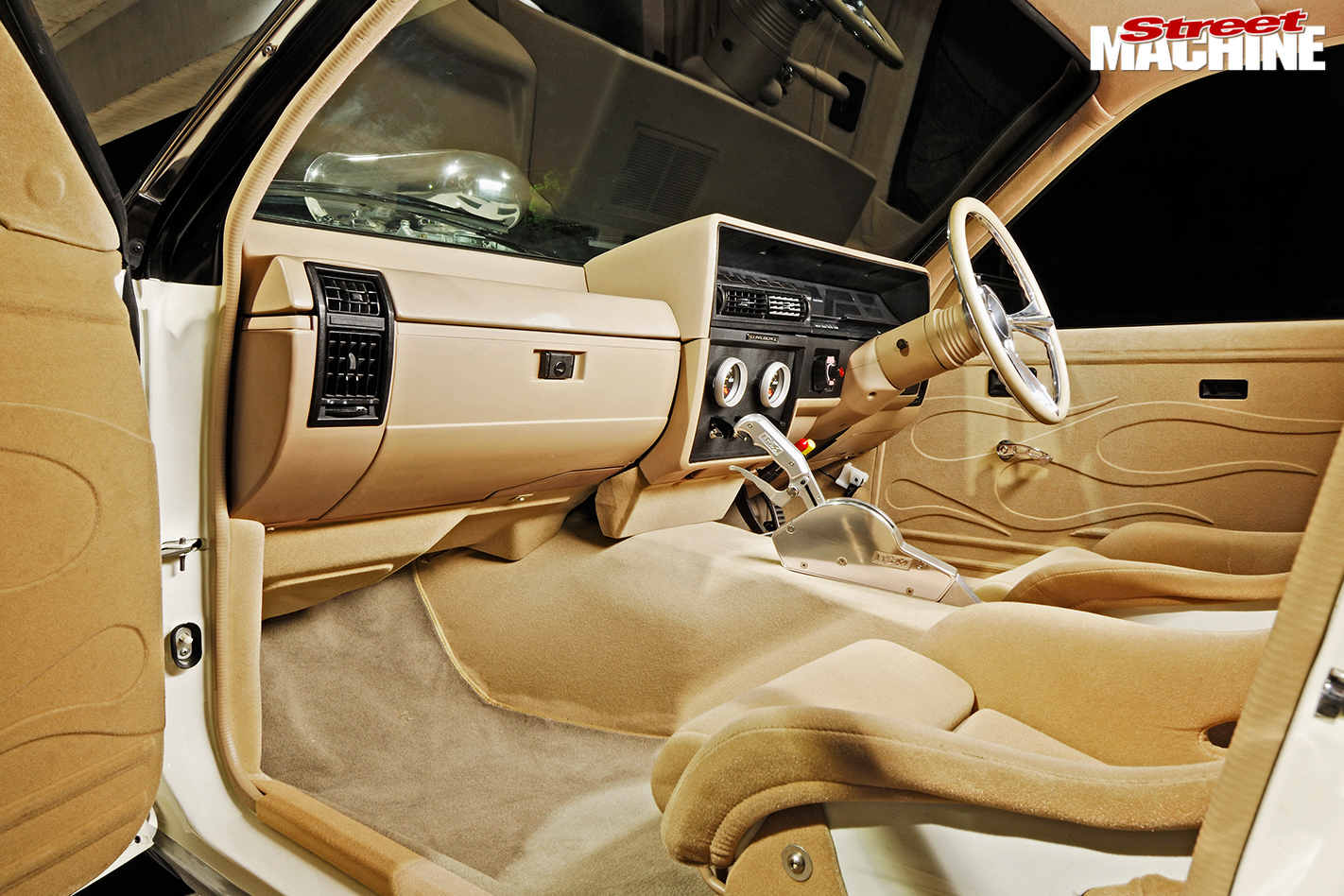 Inside, the car is an inspired mix of old and new. Jason has bolted in the front Recaro-style seats and flamed door trims from Deliverance, retaining the beige velour and vinyl wrap. The remainder of the interior was matched accordingly.

Under what’s left of the bonnet resides a blown, stroked Holden five-litre. Twin Holley 750DPs sit atop the GM 6/71 blower running 10 per cent under-driven making 8lb boost. In turn, a modified Torque Power manifold feeds down to the 355ci donk featuring L34 heads with 9:1 compression and a custom grind Crow cam. Below, ACL pistons swing off X-rods strapped to a Harrop stroker crank. Lubing the lot is a JP high-volume oil pump and High Energy baffled sump. MSD Pro billet dizzy and MSD 6BTM fire the PULP, fed from the custom-made fuel cell via a MagnaFuel QuickStar 300 fuel pump. “The radiator is a $250 eBay special and it works bloody well,” says Jason. A single 12-inch has sucking duties. CO2 exits via Pacemaker extractors through to twin 2½in pipes. 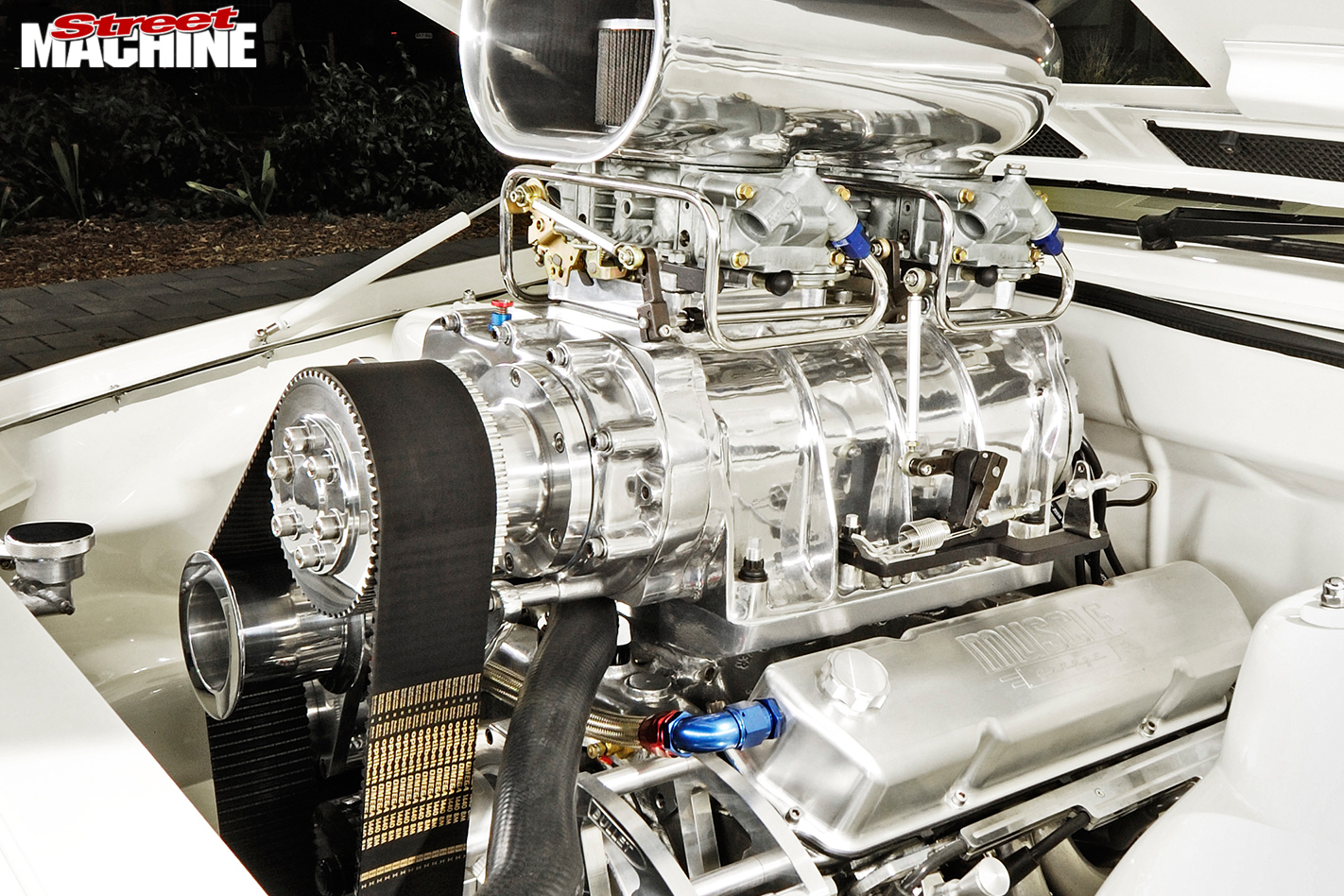 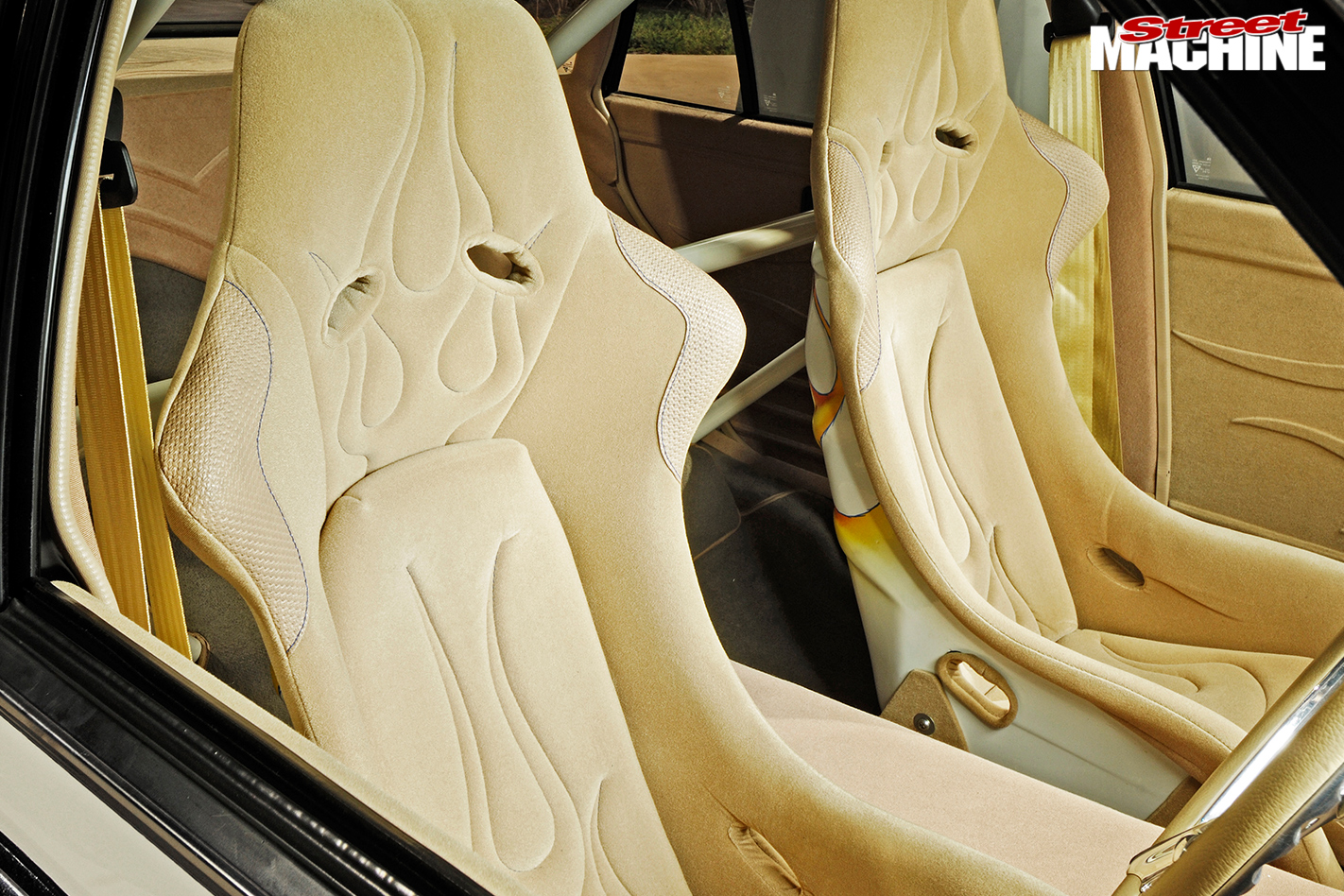 Jason’s on-again-off-again enthusiasm for the project wasn’t the only thing delaying the build. Waiting on parts and people is synonymous with any build, as is getting non-standard parts to fit. “The brake upgrade was a massive headache as Wilwoods aren’t made for early Commodores,” he says. “I had to hand-make as well as CNC machine the mounting brackets.” 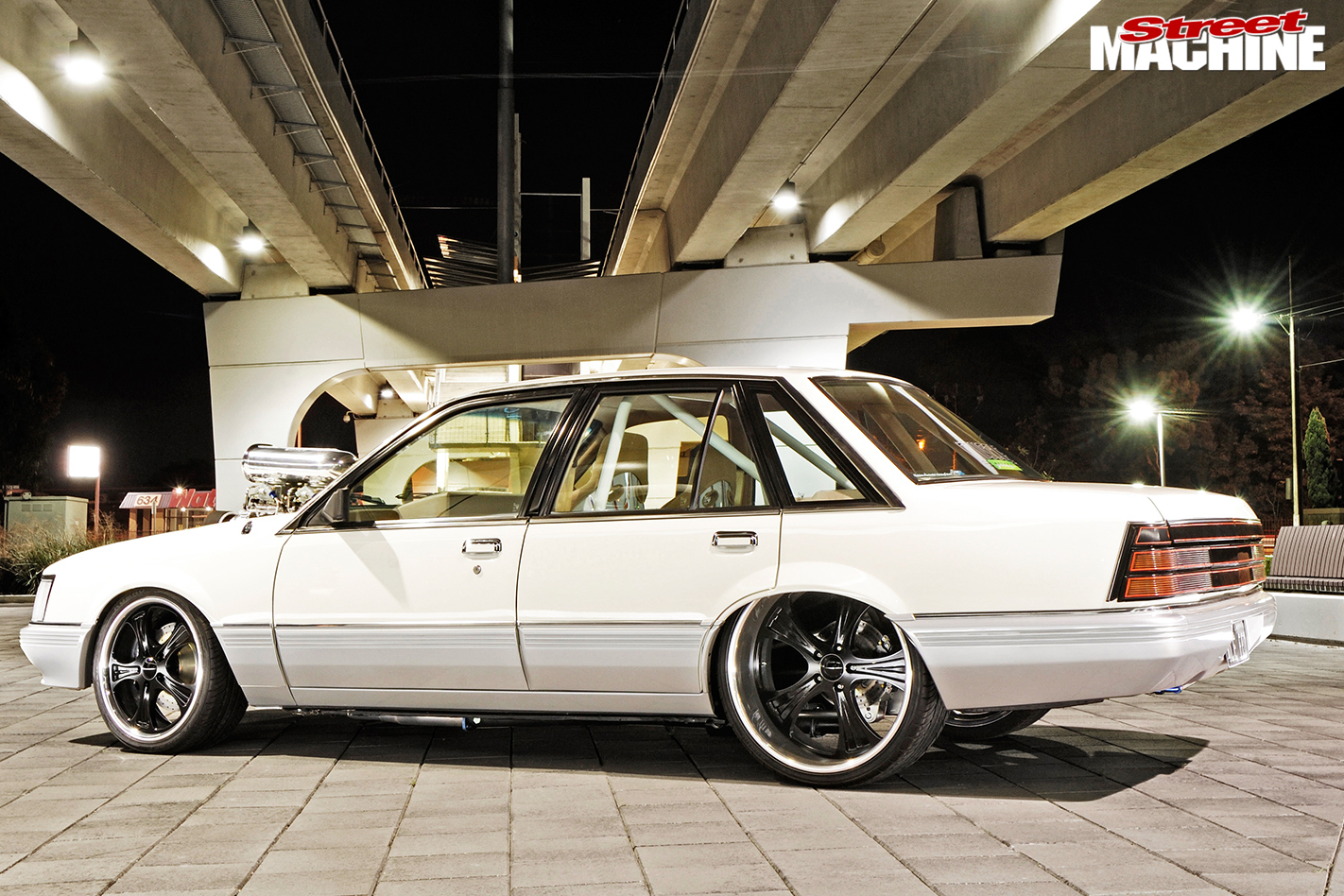 Bolted to the brackets are Wilwood Dynalite four-spots gripping 330mm HSV discs up front and 300mm UPC custom jobbies at the rear. Showing off the stoppers are massive Intro Indys – 19x7s at the pointy end and big ol’ 22x10s under the bum. Ten inches is a fair number for the notoriously narrow early Commodore rear, hence the tubs. Yet the diff was actually widened. “When I purchased the rims a few years back the 22x10s were affordable but 22x14s were over $2k a rim!” says Jason. “The 10s sat under too much so it was cheaper to widen the diff than to fork out for the 14s. RMF Engineering widened the diff to suit the wheels. In hindsight it was a bloody silly thing to do. “No one had done it back when I started the build. It was groundbreaking, but I was slack, so it’s no longer new. And now I can afford bigger rims!” 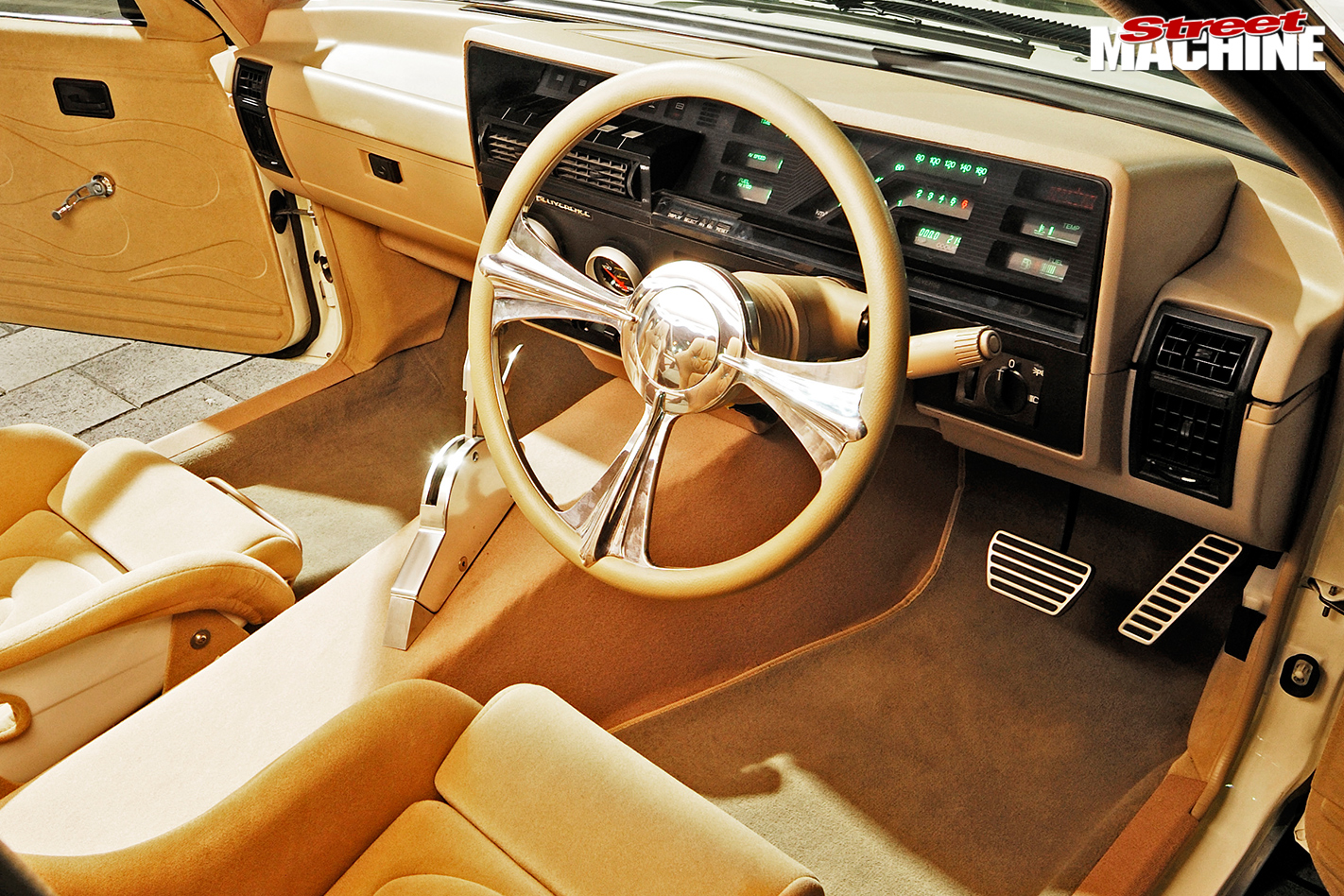 After seven topsy-turvy years, the 2012 Extreme Auto Expo was the VK’s turning point, with its first completed showing. Yet that wasn’t the highlight. “I did a lap around the track at the 2013 Clipsal 500 V8 Supercar event,” boasts Jason. “It was great! Other than that, I’m leaving it as a show-based car. I don’t really have any plans but if I still own it by Motorex I’ll take it there.”

Yeah, that’s right, the Calais was up for sale. Old habits die hard. 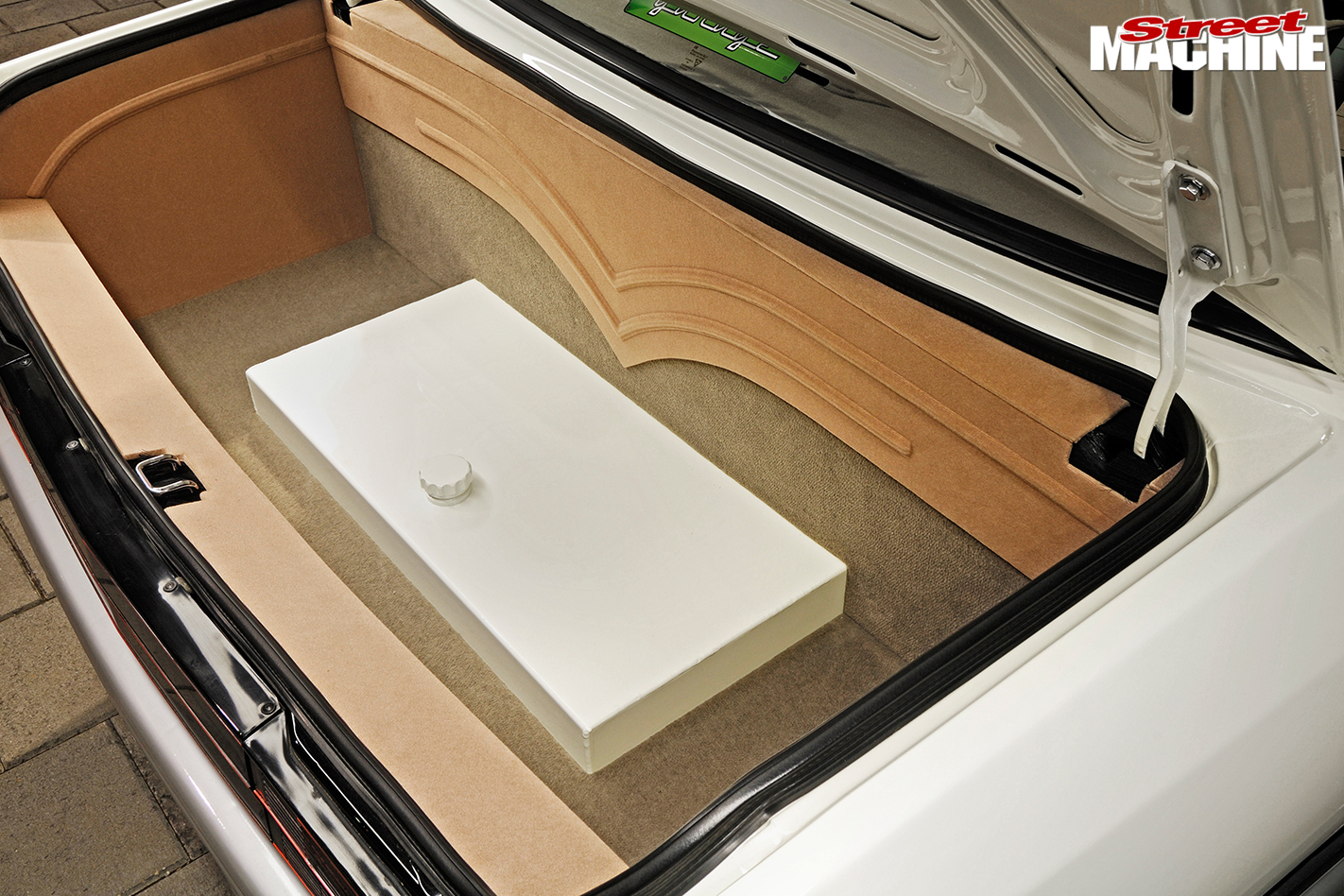