Mike Renfrey built this epic roadster in a single-car garage at home, from bare sheet steel and box section, with rudimentary tools. So what's your excuse for not doing something awesome?

This article on Mike's '33 Ford roadster was originally published in issue 16 of the Street Machine Hot Rod magazine, 2015

BUDGEWOI on the NSW Central Coast is about as far as you can get from Detroit, the epicentre of the American car industry, but that hasn’t stopped Mike Renfrey from designing and building his own vision for the perfect car completely from scratch. And this TAFE teacher did it all in his home garage. 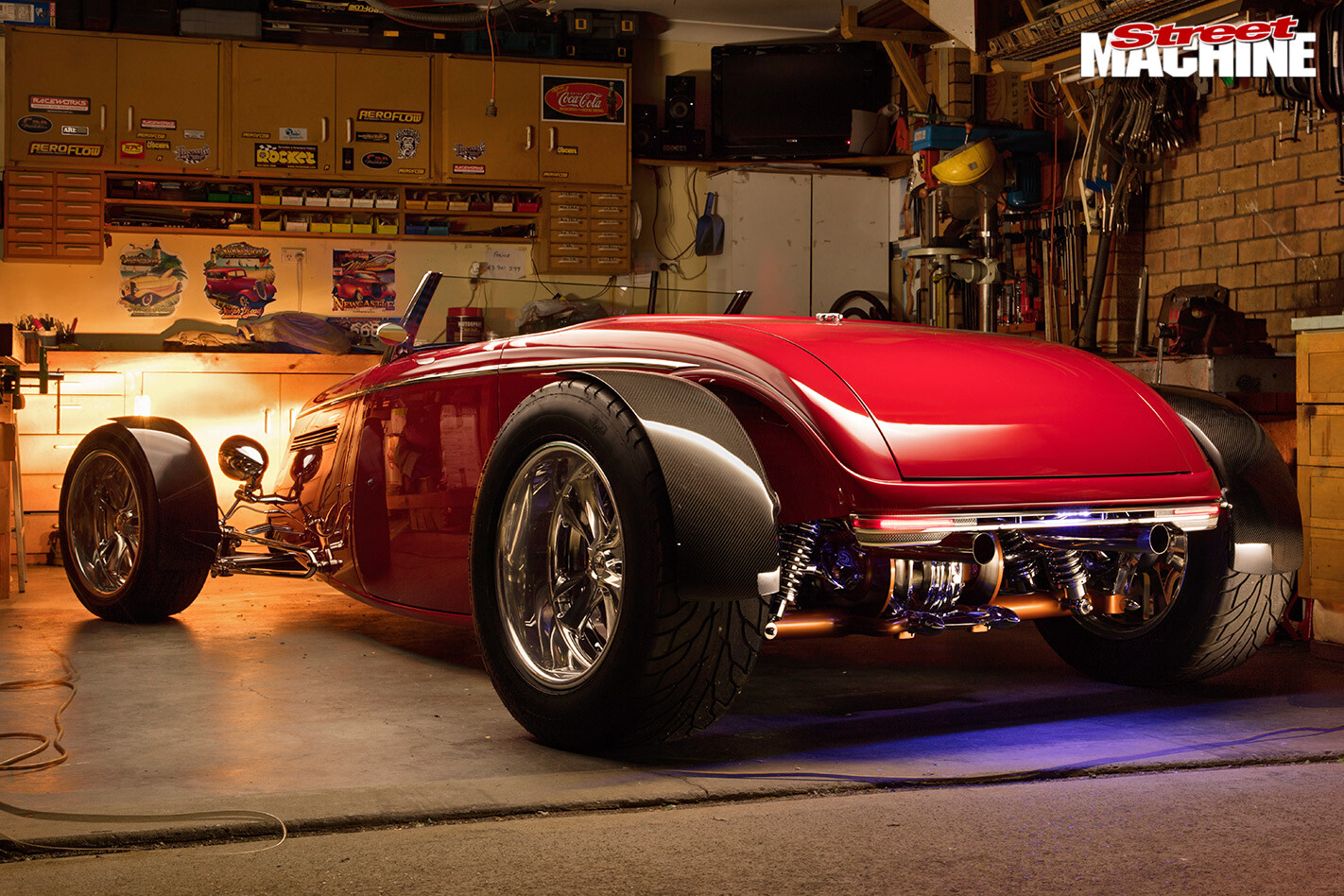 “I’m a guy who likes to get in and have a go,” the former panel beater says. “The idea for the car fi rst came about when I noticed an ad for the Speed 33 steel roadster body in an American magazine. I was thinking of building a ’32 hi-boy at the time but thought there were too many ’32s all looking pretty much the same. When I saw the image of the ’33 I knew instantly that it was the basis of the car I wanted to build.”

Over 7000 hours have been poured into this amazing build, called ‘Hand Maid’, with Mike responsible for all fi ttings and fi xtures, from initial design right through to the paint and trim. To ensure nothing was missed in the project and that it would end up as he envisaged, Mike trod a path most auto manufacturers follow when they build a concept car. Inspired by a Chip Foose design, Mike lengthened his hot rod and made it lower, sleeker and squatter than other '33s. The heavily channelled bodywork meant snaking the exhaust through the chassis to exit above the rear end

“After modifying the original illustration to get a longer, lower, sleeker look, I shaped a quarter-scale body from foam to get a 3D perspective of how it would look,” he says. “Then, once I was satisfi ed with the concept, I drew up full-scale plans for the body and chassis.

MORE 2018 contenders for America's most beautiful roadster
5
That heavily raked windscreen is yet another Renfrey original, with the posts made from yet more raw 3mm plate steel, before Mike welded, ground and had them chrome-plated to suit his fastback design

“The car was to be built to a budget, so I decided I would make as much of the car as possible myself to cut down on cost. This included fabricating the entire chassis, body, and any other parts and components that could be made from cutting, welding and shaping metal in my home garage.

“I had never built an entire body but I had made plenty of panels for restoration projects, hot rods and customs cars over the years, so I fi gured it was just a matter of making them one at a time and fi tting them all together.

5
"The grille took over 200 hours of work alone," Mike says. "The shell was custom-made in fibreglass because of the intricate shapes and contours, with the bars water jet-cut from 3mm stainless plate and individually polished. Two bending jigs were made to cold-bend each bar and another jig was made to hold the bars in alignment and spaced correctly. A surrounding frame was welded to each bar to hold them in place"

“From these I made a wooden buck to form the panels on and, to attach the panels, I built a body frame using RHS steel shaped to suit the panels. This type of construction proved extremely strong, as with the body alone sitting on stands the doors and boot still open perfectly.”

While he had access to the TAFE workshop in North Sydney, Mike chose to toil away on the hand tools at home on the Central Coast, an hour and a half north from his workplace. And there were no reality TV-style catalogue parts drops, with Mike donning the welding gloves and helmet to do it all himself. “The chassis is made from 3mm plate, which I plasmacut to shape,” Mike explains. “The sections were then tacked in place on the jig before being completely welded inside and out, adding up to around 58 metres of welding in total.”

It wasn’t a walk in the park, however, with Mike soon fi nding that building a vehicle from scratch meant assessing every tiny detail across the thousands of fittings that make up one car. 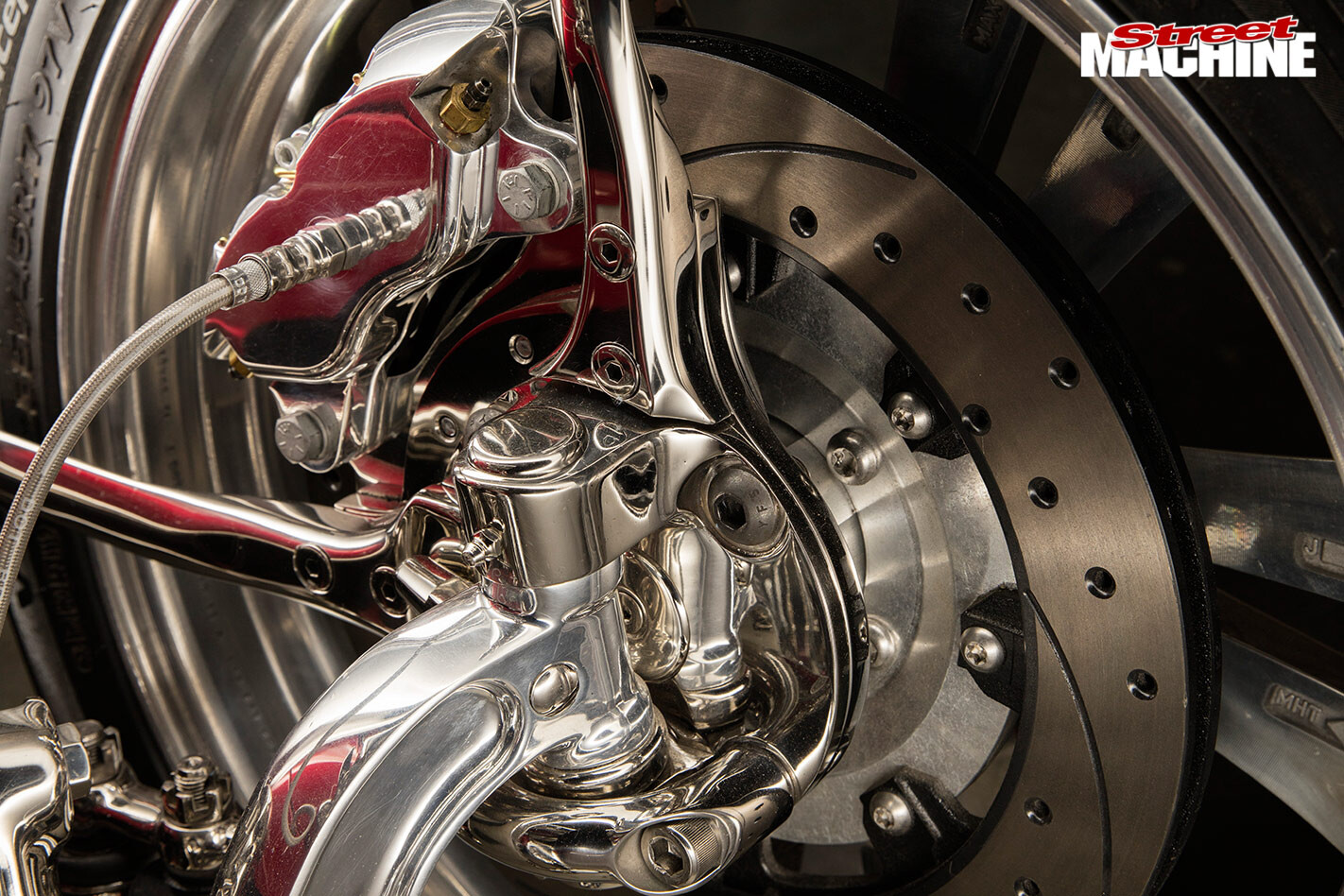 “One of the drawbacks of custom-building an entire car is that once you start you quickly realise there is very little you can buy that will simply bolt on; nearly every part and component needs to be custom-made to fit, including the boot and door hinges, handles, windscreens, fuel tanks, grilles, dash, guard brackets, guards, tail-lights, headlight brackets and all sorts of mounting brackets, and hundreds of other parts.”

Rather than compromising his design to suit off-the-shelf parts, this inspired Mike to ensure Hand Maid would truly be his own. 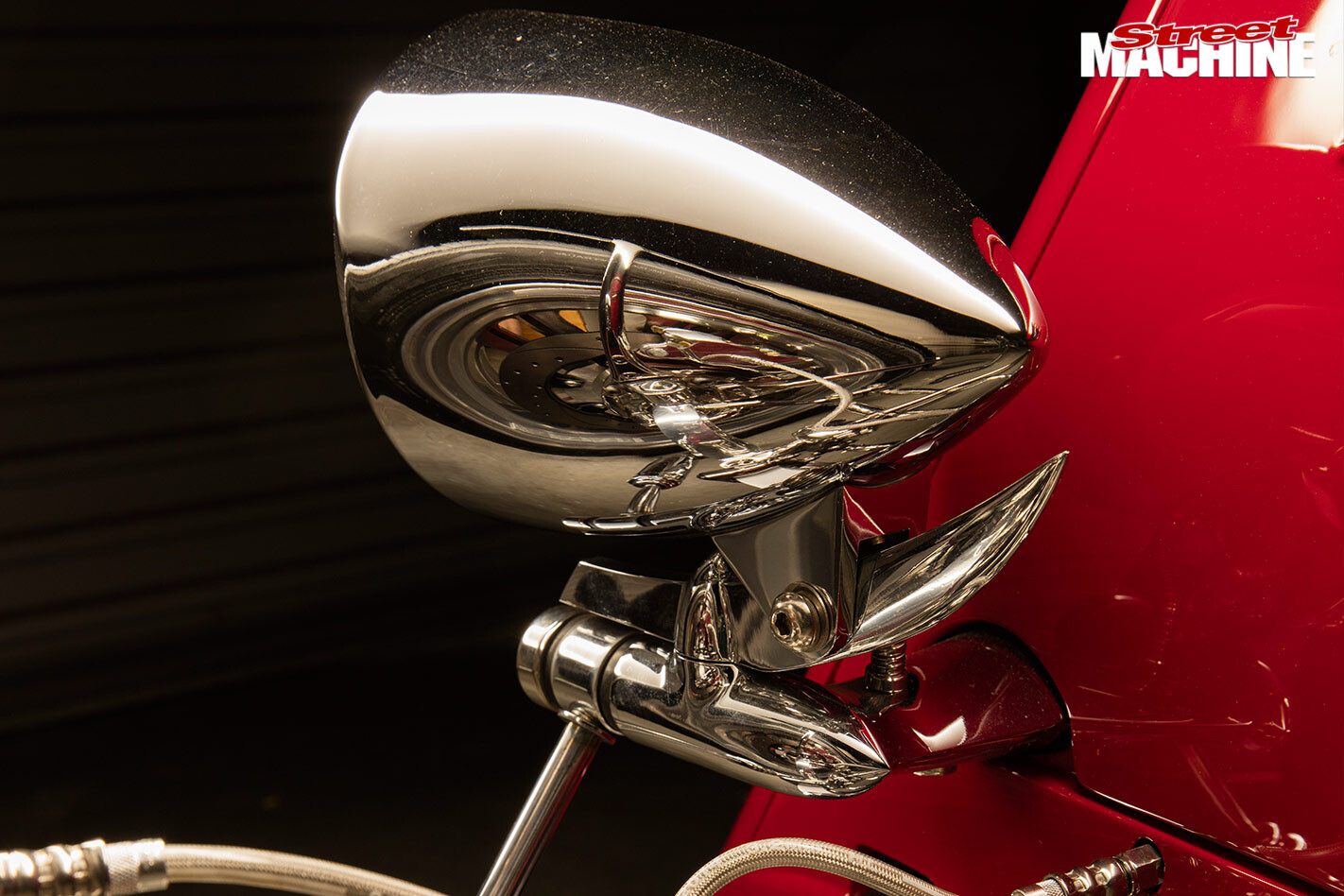 “Most parts were fashioned for function and necessity, but I wanted to try and make every part as unique as possible,” he explains. “I put as much thought, time and detail into each part as I could, but I had to keep in mind that I was doing all the work myself and I wanted to finish the car within a reasonable time frame.

“A good example of this is the guards and brackets. The rear brackets were fi rst shaped from wood and body fi ller, and then cast by a local foundry in aluminium, which I then smoothed and polished. I chose carbonfi bre for the guards because of the strength, weight and how unique-looking they would be. “I first shaped a plug and then made moulds, before hand-laying the guards themselves. The front brackets are made from stainless steel and incorporate the caliper brackets to simplify the overall look. These were also ground to a unique shape and polished.”

You might notice the contrasting suspension architecture – this was done on purpose, as Mike doesn’t dig independent front endson open-fendered rods. A So-Cal Speed Shop dropped I-beam sits up front for a cool traditional look, with a de-burred, smoothed and refined Jag IRS rear-end to give a contemporary touch.

The inboard Jag rear disc brakes have been paired to modern Wilwood discs and calipers up front, fitted with dust boots to make sure they’re fully road-legal. 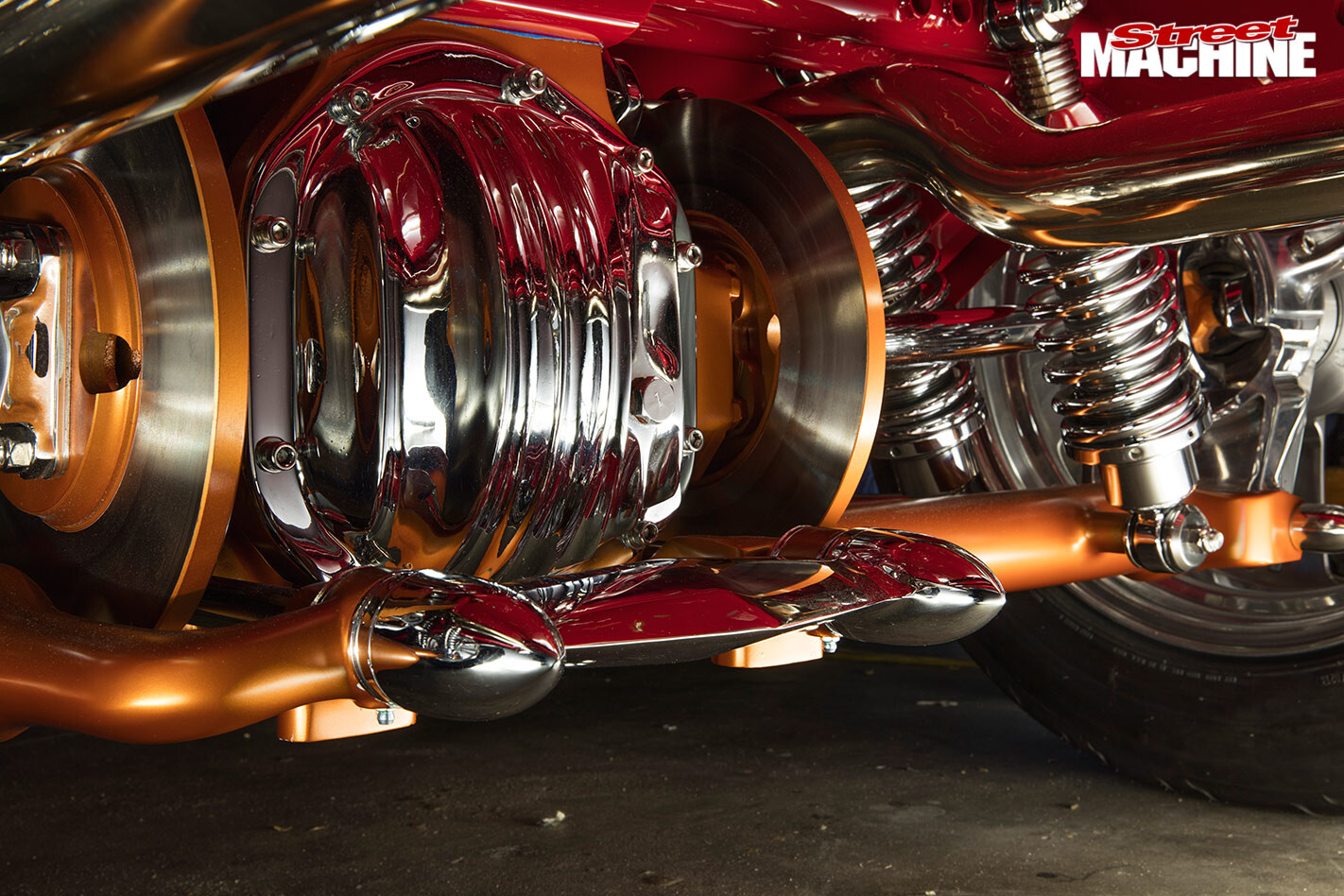 To keep the bonnet lines untouched by bulges or holes, a 350-cube small-block Chev and TH700 four-speed auto powers Hand Maid, with the drivetrain dressed with an Edelbrock dual-quad intake and carburettors, matched to finned Edelbrock rocker and timing covers. Mike added a custom exhaust, with an electronic ignition and a custom alloy radiator.

The interior of the car also took epic amounts of work, with Mike responsible for much of the planning while fellow Eazy Street club member John Viles handled the task of covering Mike’s hard work in sumptuous Burnt Orange leather.

“I designed the interior to reflect the sleek sporty concept of the exterior. The wrap-around seats were first constructed with steel frames and then contoured in timber and foam. The console was built from timber and fibreglass, with the accent moulds made in stainless and the gearstick bezel from steel and then plated.”

5
"Initially I set up the chassis using a Ford 302 and transmission but unfortunately the dimensions proved unworkable with the limited bonnet height available," Mike says. "The decision was made to swap it out for an SBC combo, which allowed a clean bonnet line without holes or bulges"

The build ended up as a mad thrash to get it painted, assembled and delivered to MotorEx 2015, where Hand Maid took out a swag of awards, including Top Hot Rod — just reward for such a painstaking and intense build!

“When it was on display at MotorEx a guy came up to me and asked me if there was anything I would change,” says Mike. “I thought about it for a while and honestly, I couldn’t think of a thing; I’m really happy with the finished car.”

5
"I wanted to keep the stock appearance of the original dash but give it a contemporary touch, so I used the basic shape and centre feature, but raked back the side panels and flowed them into the doors. I tried to keep the look simple by adding only the two gauges and angel-eye switches for the lights and start button, and the the warning lights flush with the dash surface?

With a couple more shows to attend in early 2016, Mike plans on getting out and enjoying his hot rod on local roads and, while he’s made murmurs about doing a ’40 pick-up, isn’t planning any more builds any time soon. We reckon this one is going to be next-to-impossible to top!