A LOT of you are probably thinking: “Wait, what? Why is there a GT40 in Street Machine? This mag is for people who pour their blood, sweat and tears into building the best street machines in the land!” Well, that’s precisely what Jason Ferraro did with his car. Sure, the starting point wasn’t the usual Aussie or US production car, but the amount of engineering, fabrication and passion poured into this ride was no different, and like many cars featured in SM, it was built in the shed at home. 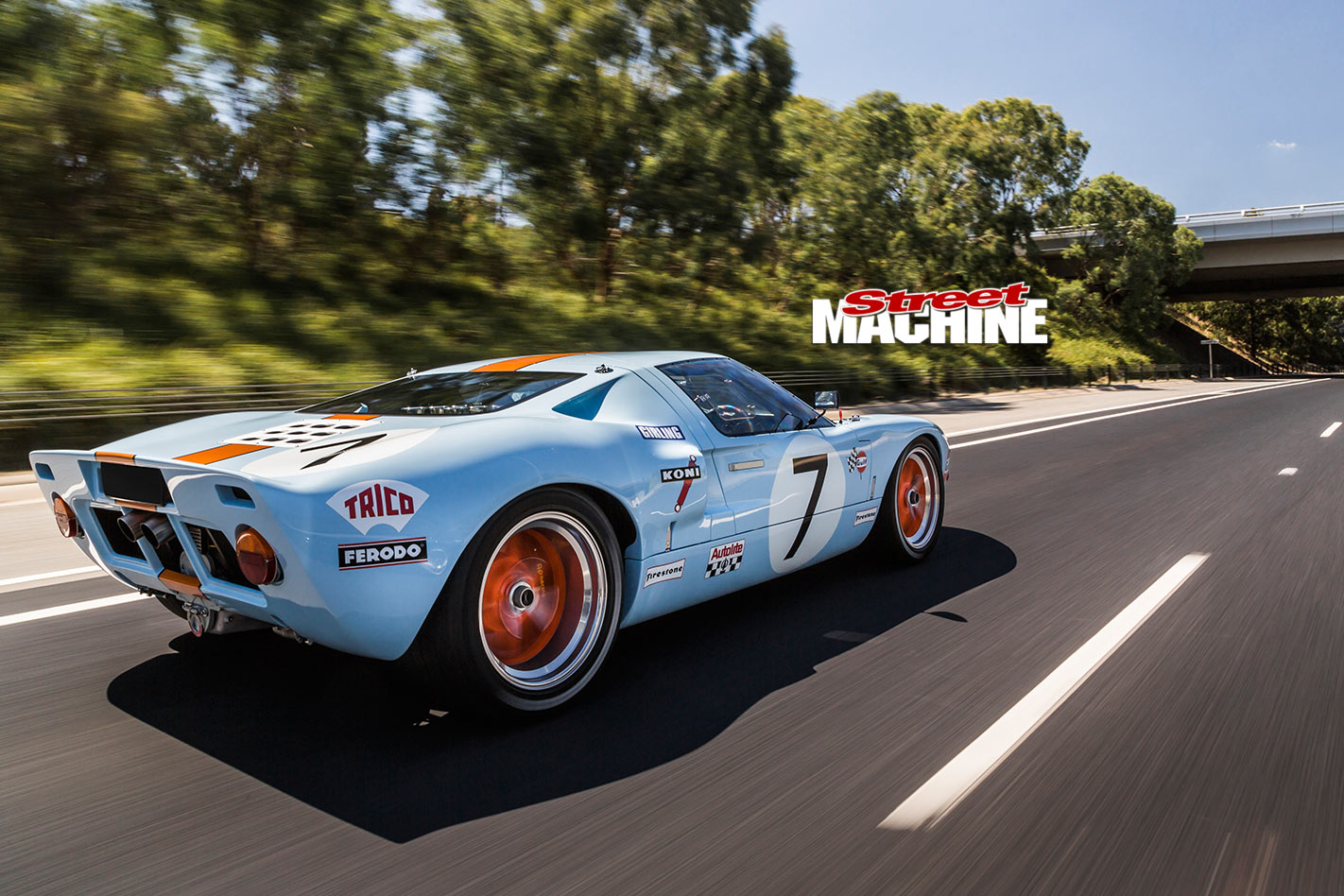 The GT40 might have been designed in the early 60s, but boy does it still look good - and also has the aerodynamic capability to go well over 200mph

“I chose an RCR [Race Car Replicas] GT40 kit because I wanted an aluminium monocoque chassis, so that narrowed down the choice,” Jason says. “They also don’t use production A-arms; it’s all custom billet suspension.” 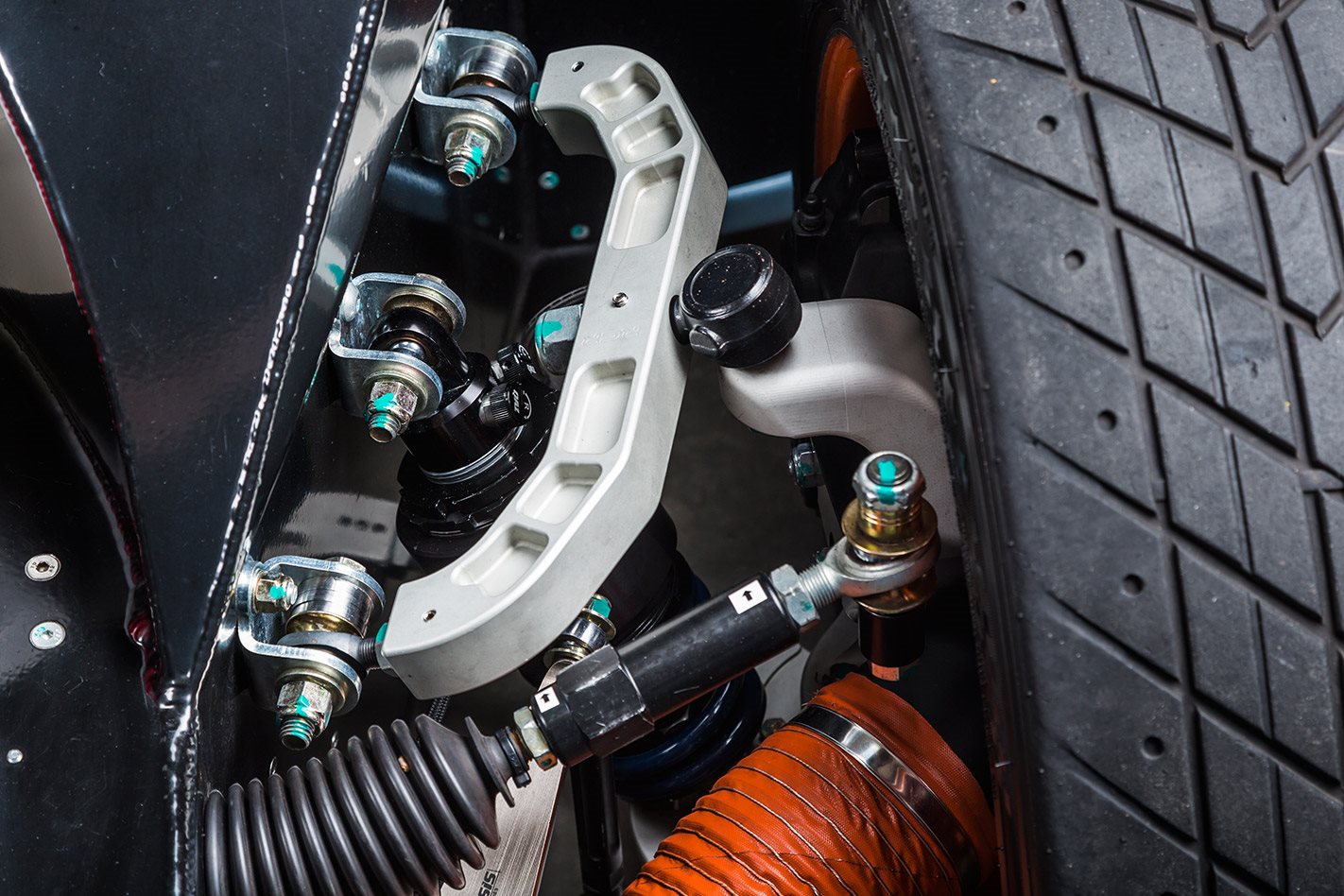 One of the main reasons Jason went with the Race Car Replicas GT40 kit was because of the bespoke suspension pieces it comes with. Many kits run OEM parts, but this is all race-spec gear. The front suspension has also been fitted with a hydraulic lifting system that can raise the car 75mm to get over bumps or up steep inclines

While the car looks like a ridgey-didge copy of the Le Mans GT40s, underneath the skin there are quite a few updates to add modern performance to the classic looks. 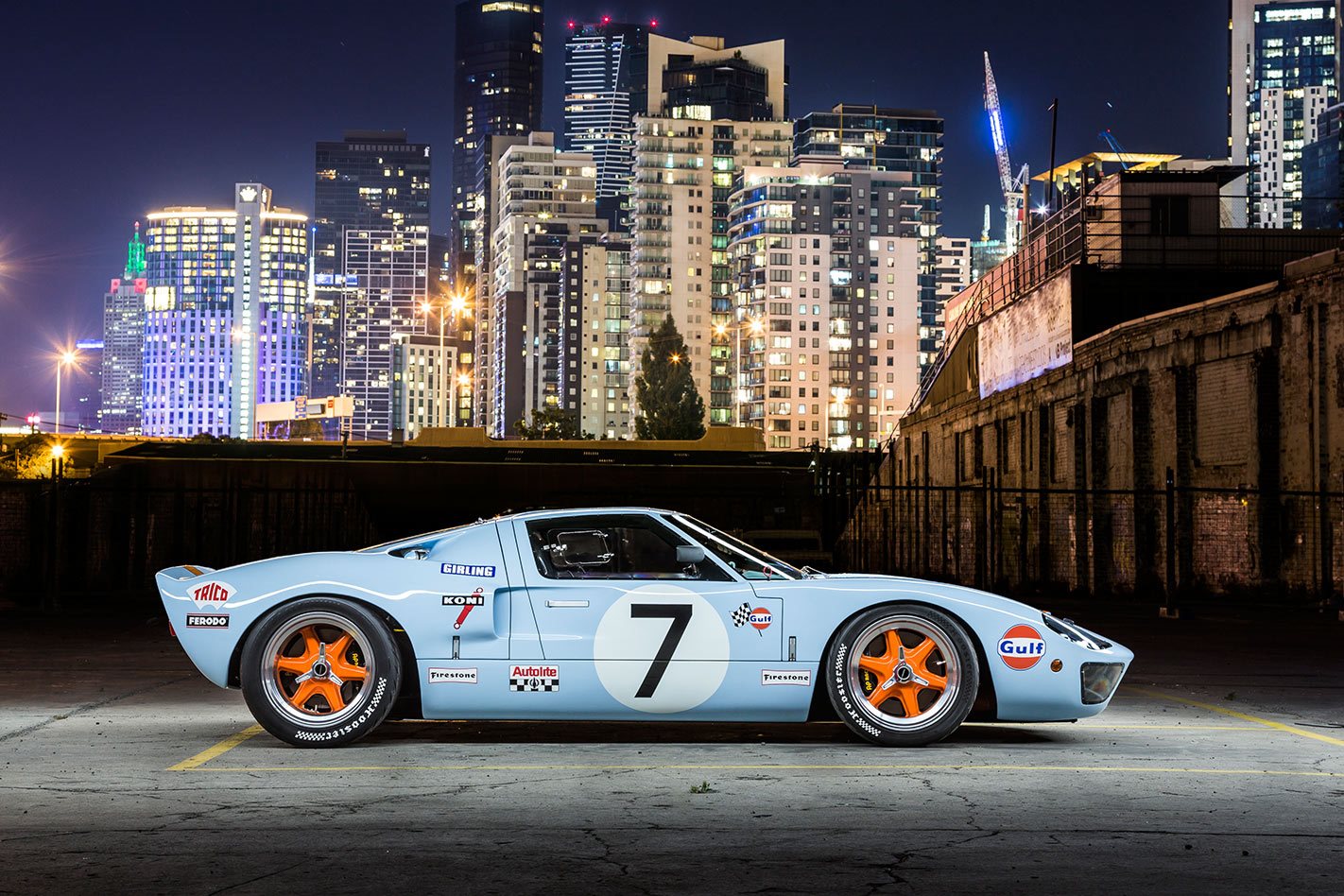 Blue Oval lovers will be pleased to hear that it’s Ford-powered as well, but that wasn’t always going to be the case: “Initially I was going to put in a 6.0-litre LS – I actually bought the engine and everything,” Jason says. “I didn’t want the 5.4 Ford modular engine because it was a bit heavy and a bit slow. But then the Coyote was launched! I wanted a Ford transaxle as well, so that’s why I chose the Ricardo transaxle, which is out of a 2006 Ford GT supercar. It also bolted right up to the Coyote with no adapter plates and uses a Ford twin-plate clutch and flywheel. It was really important to me to have a good driveline. The only problem was the cost of the transaxle; apart from the chassis it’s the most expensive part of the car.” 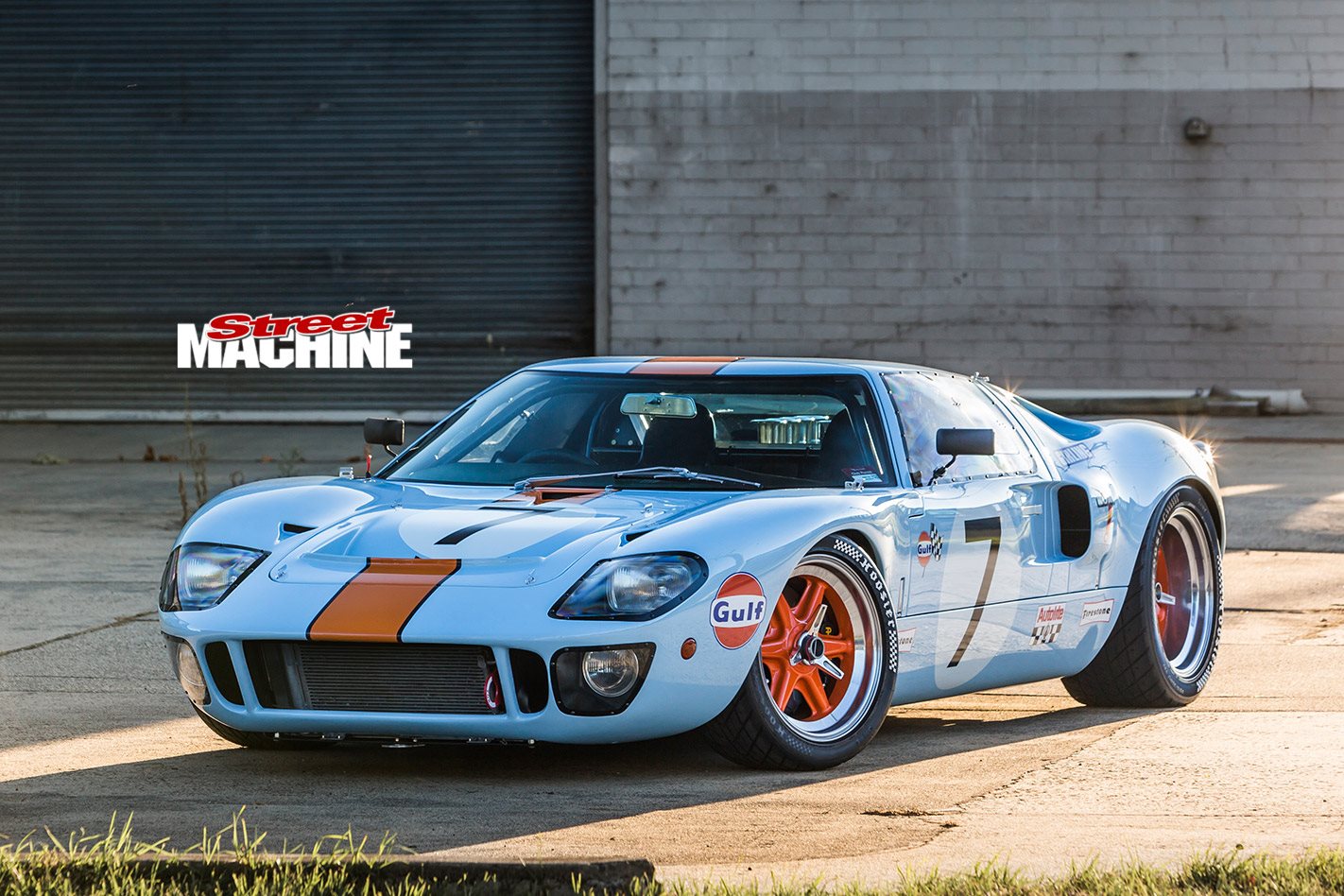 Calling this a kit car seems a little bit demeaning; it implies that it came in a box and Jason just bolted it together, and that perhaps the finished product is a mish-mash of parts and ideas. But that is not the case at all. Not only has this car copped a fair bit of customisation, the quality of the parts and the attention to detail that Jason has lavished on this GT40 is truly amazing. 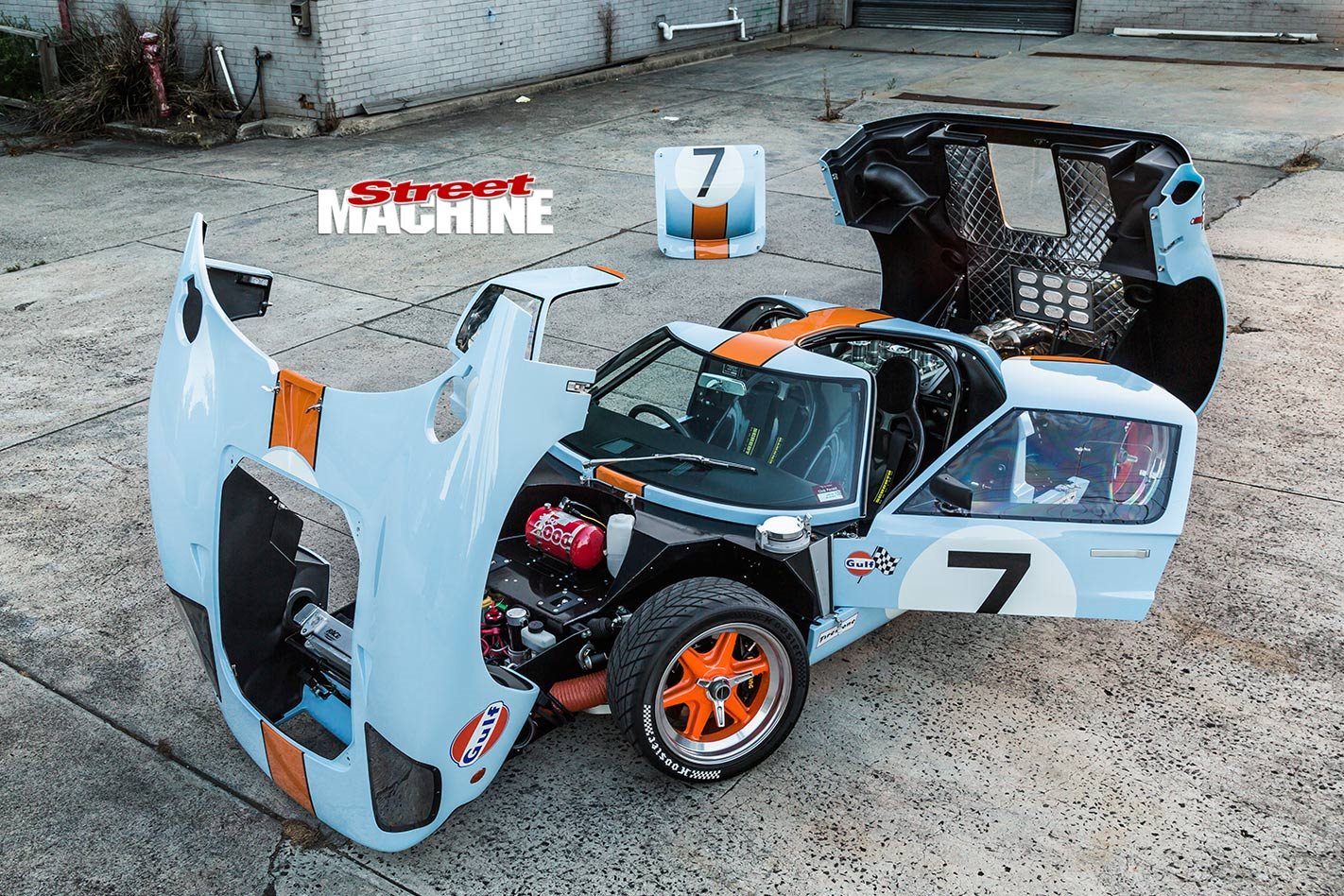 It wasn’t just about how the finished product looked; it had to function as well as if it had come off the factory floor. 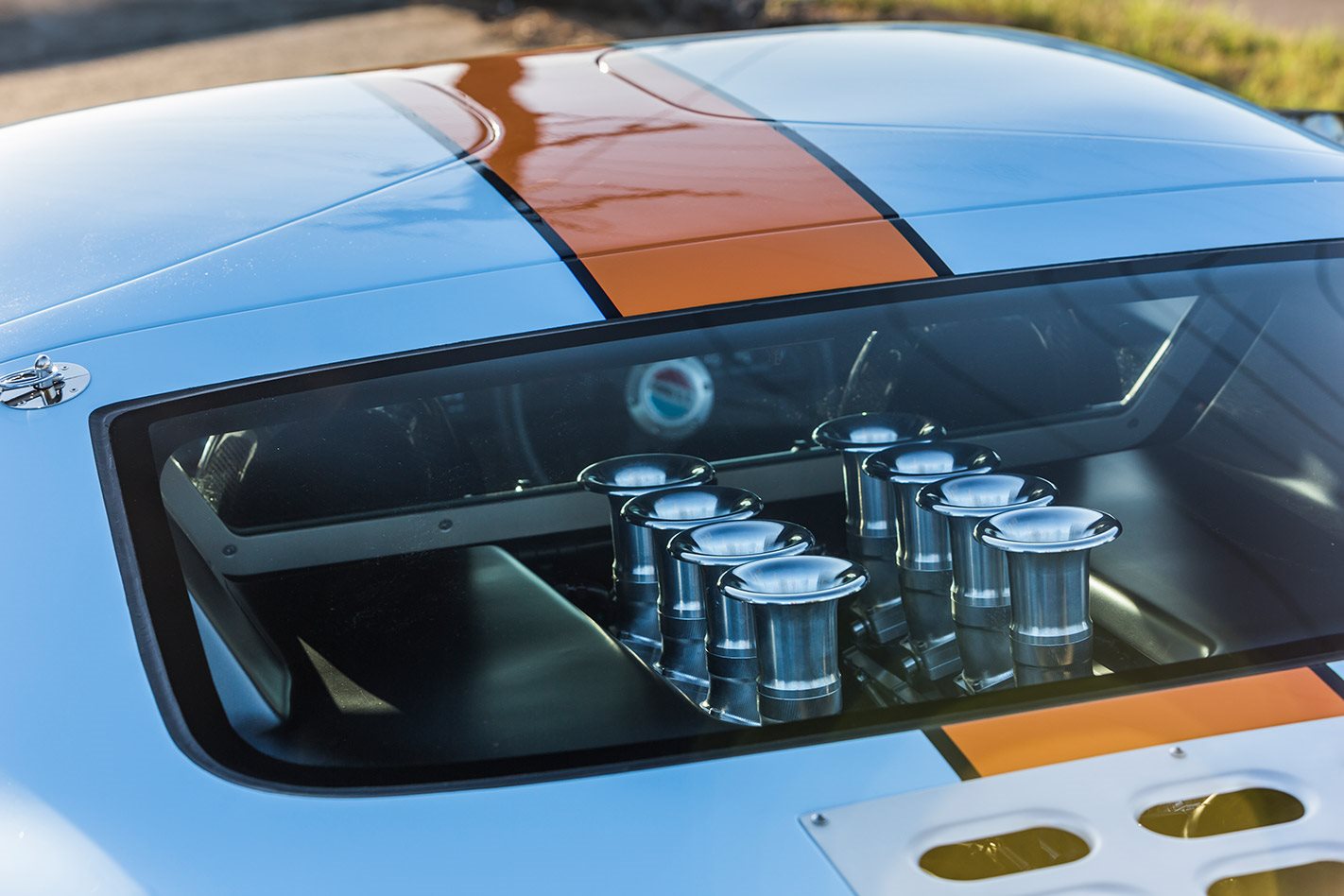 “When I first built the car there was a problem with the gearbox; it would occasionally baulk on third and fourth shifts, and I was about to send it back to the US. At the last minute I opened up the side of the gearbox and I could see what was wrong and was able to fix it myself for about $15,” Jason says. “It’s a beautiful ’box and absolutely stunning to use. I used an original Ford Racing short-shift inside the car and machined up all the billet parts to mount it in the centre console, so what you end up with is an OE transmission shift quality.” 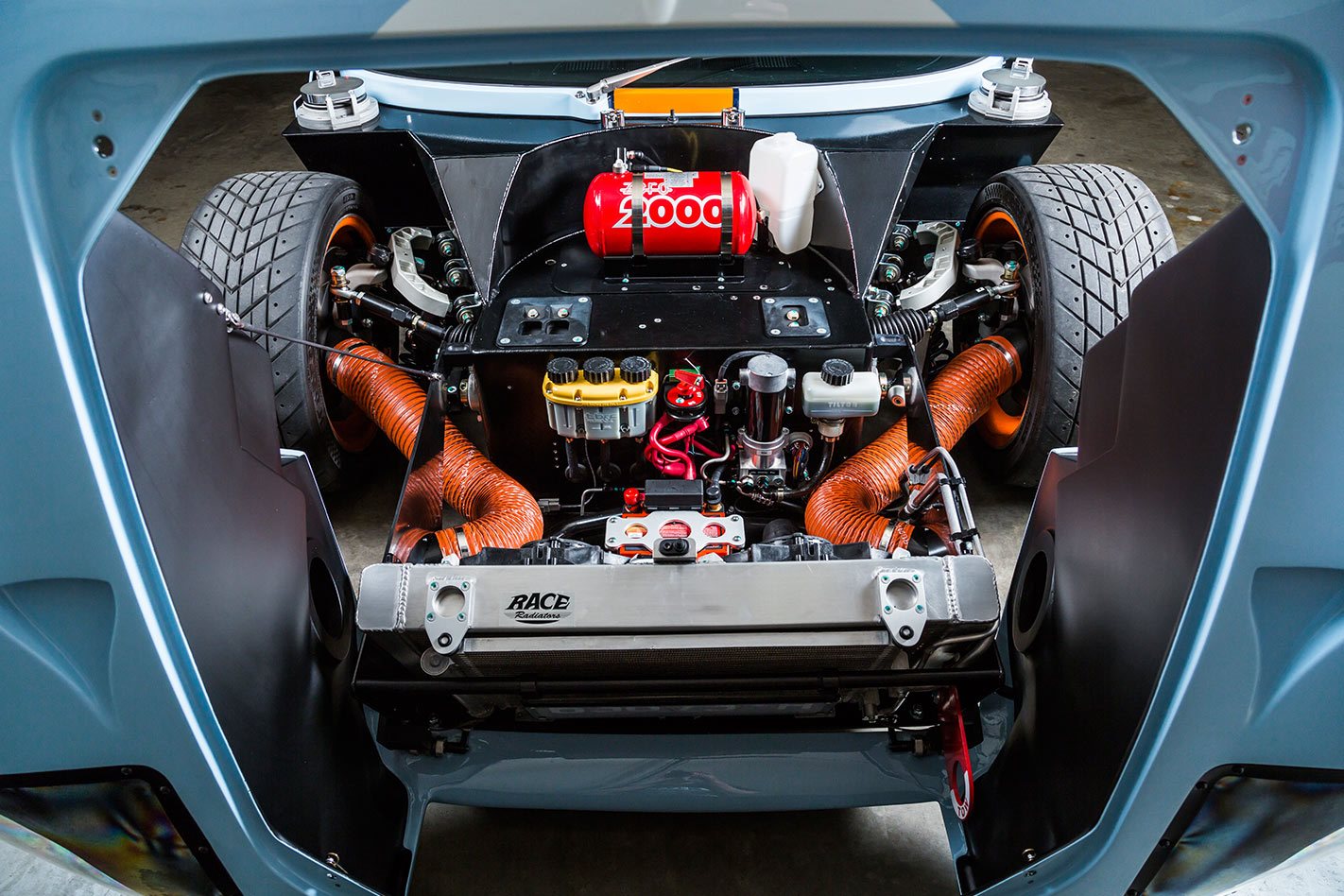 The attention to detail and quality of this build is evident here. The radiator mounted in the front is an a/c condenser that has a built-in receiver-dryer for a very tidy installation

Another part of the build that impressed me was how well all of the wiring and plumbing has been routed. Modern engines quite often look like a dog’s breakfast with all of the wires and hoses running everywhere – hence the need for plastic covers – but Jason has managed to make the 5.0-litre Coyote look pretty tidy. 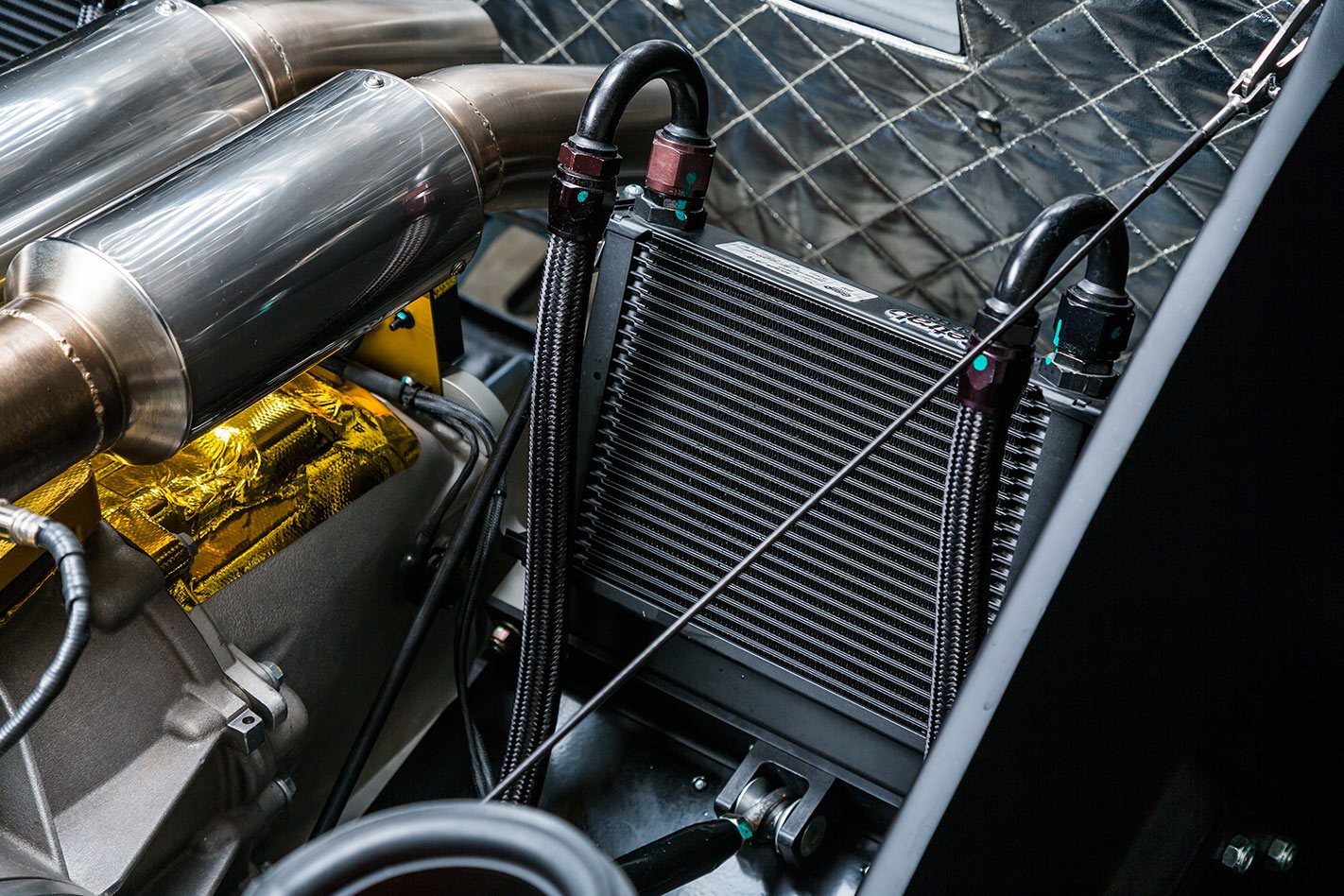 There are two coolers in the rear of the car, one for the transaxle and one for the engine, which is thermostatically controlled to keep everything at the correct operating temp. The dabs of paint on the fittings are to indicate that the fastener has been torqued and potentially identify if it has loosened off

“I pulled the whole engine harness apart and re-routed it to reduce how much runs around the top of the engine,” he explains. “There was a lot of work making billet parts to change where the coolant ran, and I changed the crossover because of where the alternator is mounted up high. You can’t see any of it but there’s a custom serpentine belt layout to fit the non-standard a/c compressor and alternator position.” 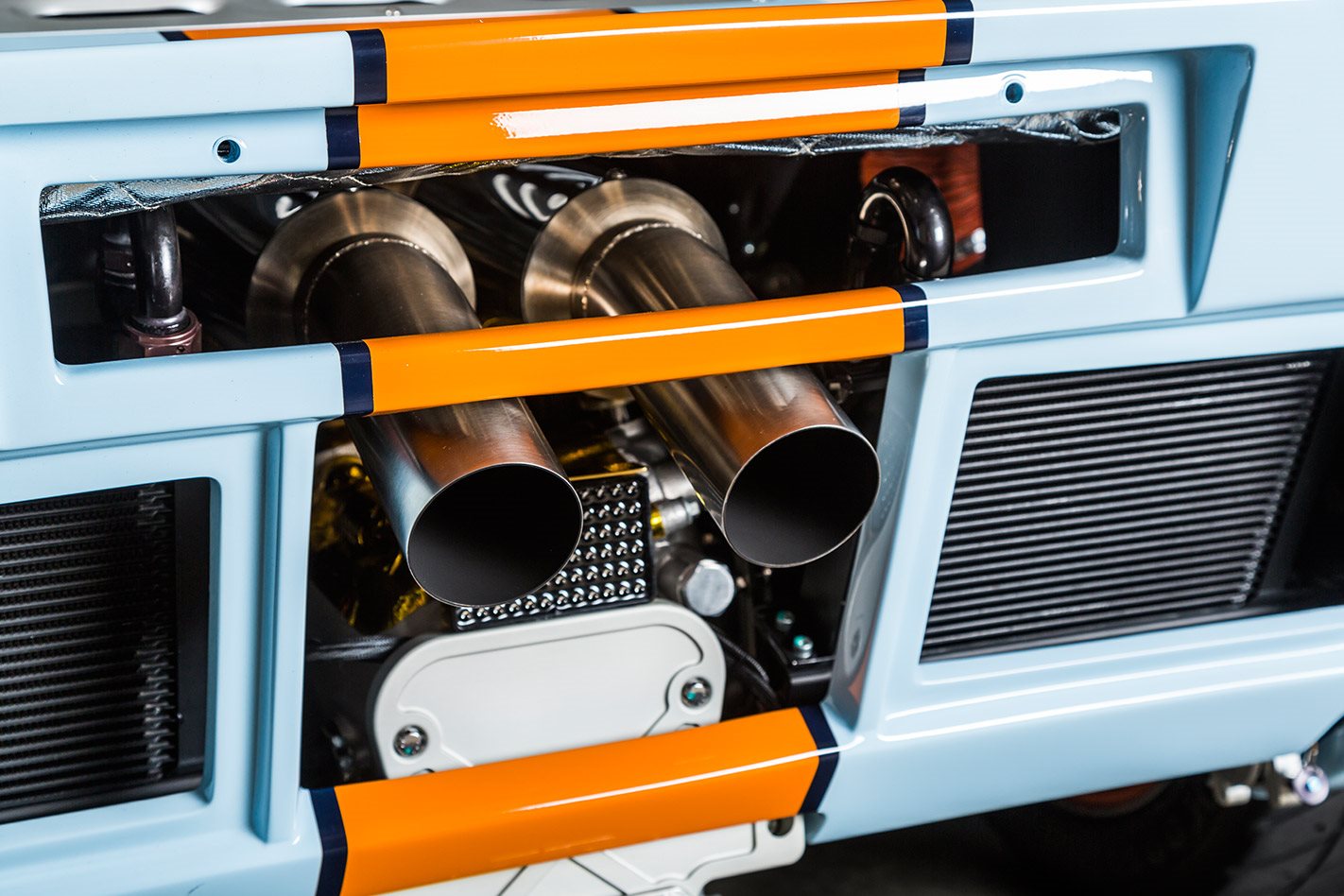 The other thing you may not notice is how the underside of the body has also been finished off nicely. Yeah, it’s painted satin black, but look how smooth and clean everything is. “I didn’t want to drive around in a canoe, and that’s what I always think of when I see fibreglass that’s got the matting under it,” Jason says.

“There were many hours of high-fill and finishing it – you can’t hide it in a GT40.” 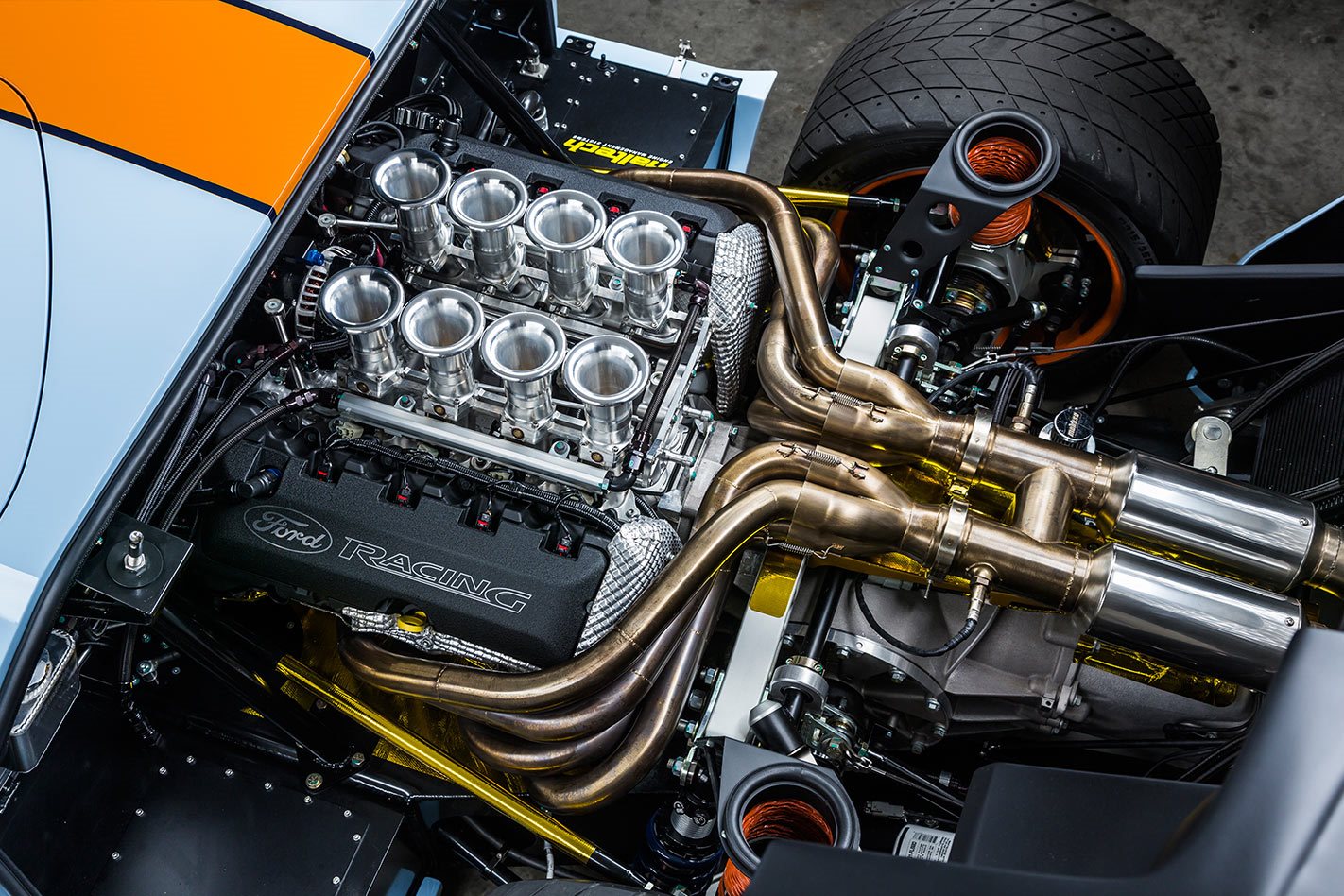 It’s pretty tough to make a modern engine look as clutter-free as this. Jason managed it by completely disassembling the wiring loom and redirecting the coolant lines. The InnoV8 individual throttlebodies are a work of art and were designed to be vertical like the original GT40s, although Jason admits they would be more efficient if they leaned over for a direct shot into the intake port

When it came to painting the exterior, it was a no-brainer – Gulf Racing all the way. If you actually told someone you were going to paint your car light blue with a bright orange stripe down the middle, they’d probably think you had lost your mind, but for some reason the Gulf colour scheme just works. As Jason says: “There’s not many chances you get to paint the centre of your wheels orange and not look like a dickhead!” 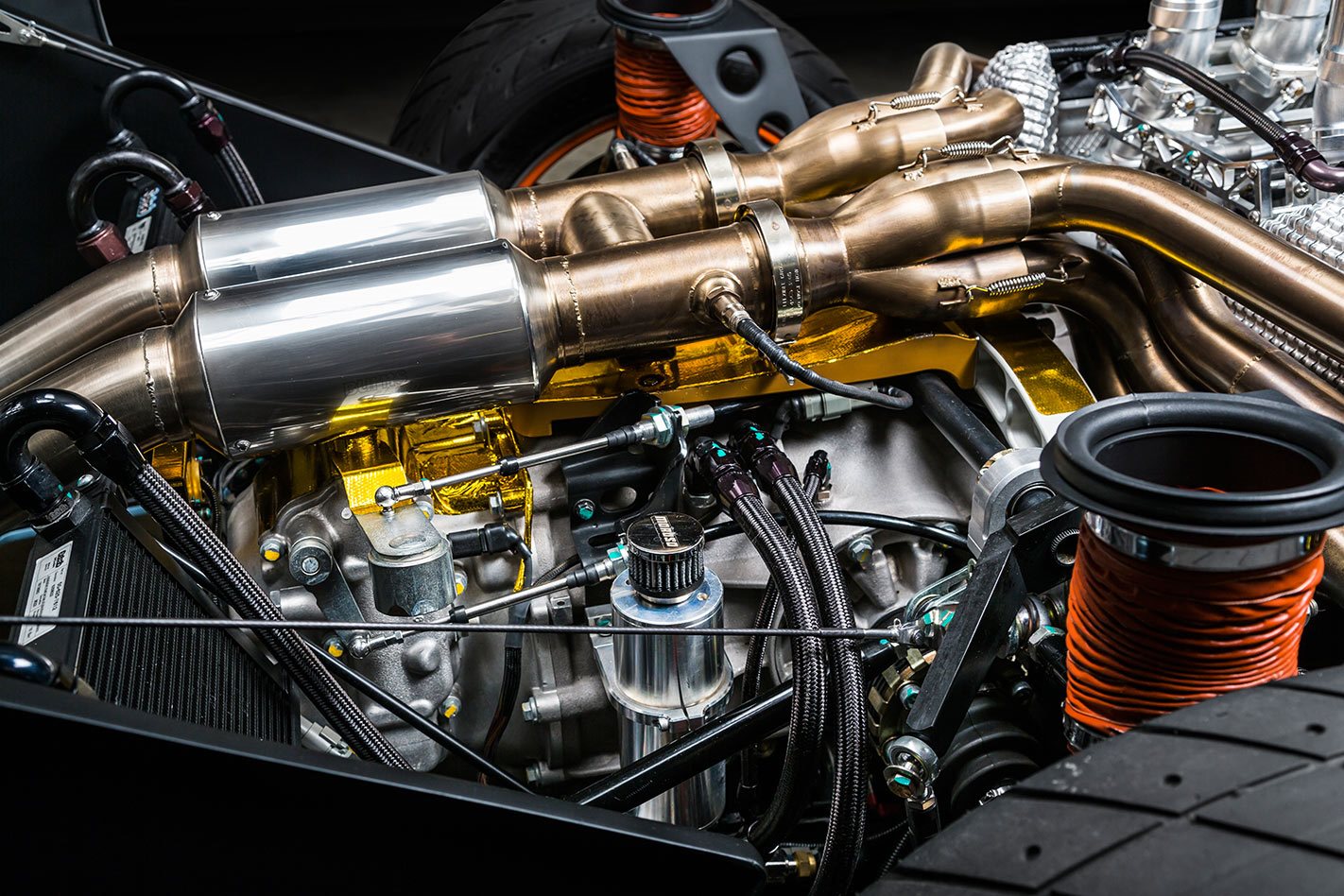 A fair bit of blood, sweat and tears went into shaping the heat shielding around the engine so that it fit perfectly and protected the cam sensors and other engine electronics

Speaking of those wheels, while they look just like the ones used back in the 60s, they’re actually in a 17-inch diameter, which allows Jason to run much bigger brakes than a 15-inch rim would allow. To that end he has fitted 343mm AP Racing brakes and six-spot calipers to the front and 328mm with four-spots on the rear. There’s some fairly hefty rubber on board as well, with 225/45 Hoosiers up front and 315/35 out back. 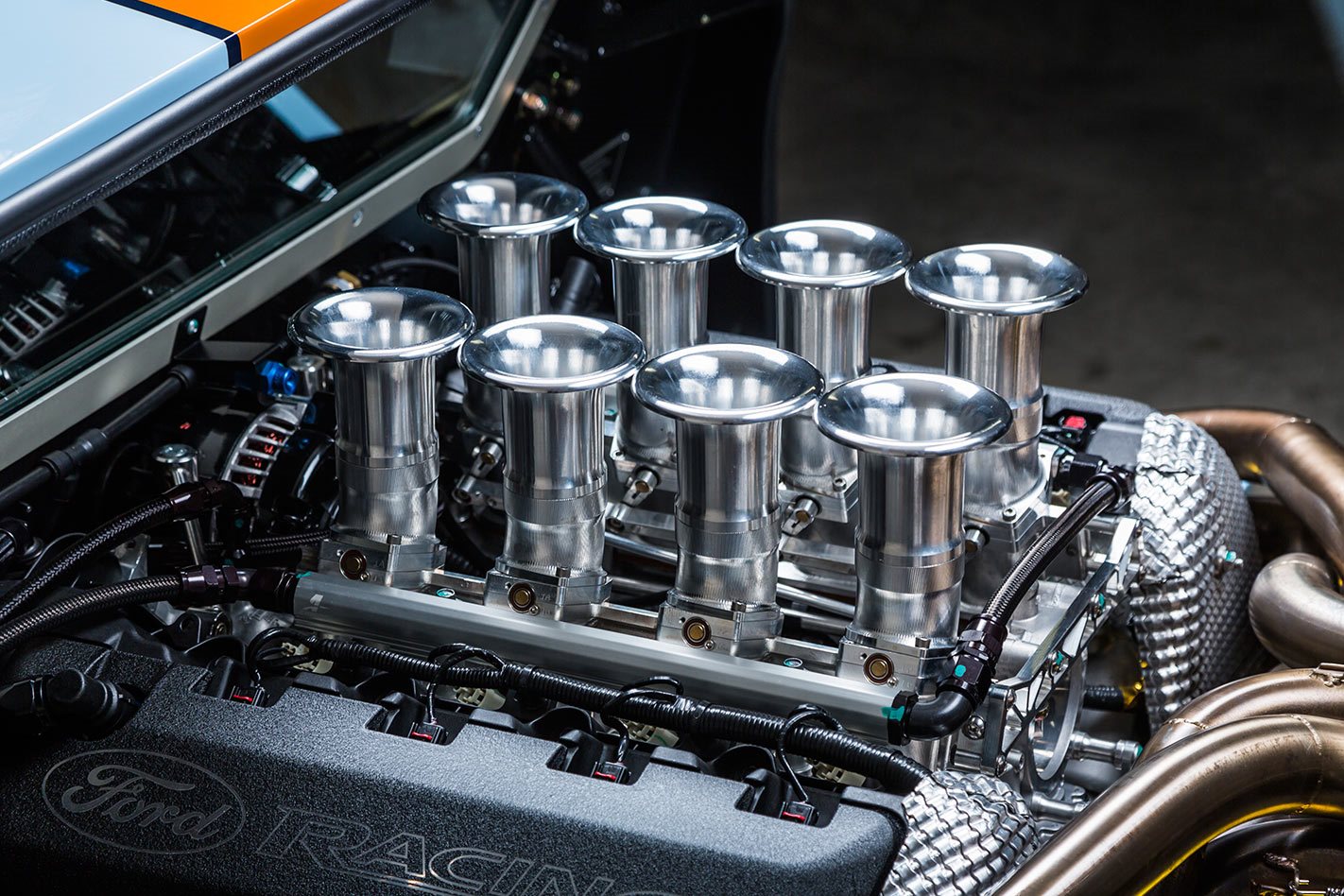 Jason estimates the car is making upwards of 500hp at the motor with the upgraded cams and eight-stack injection, and with only 1100kg to push around, it’s got more than enough poke to keep him happy. With some 8000km on the clock, including a few laps around Phillip Island, it’s no surprise he’s on his second set of tyres already! 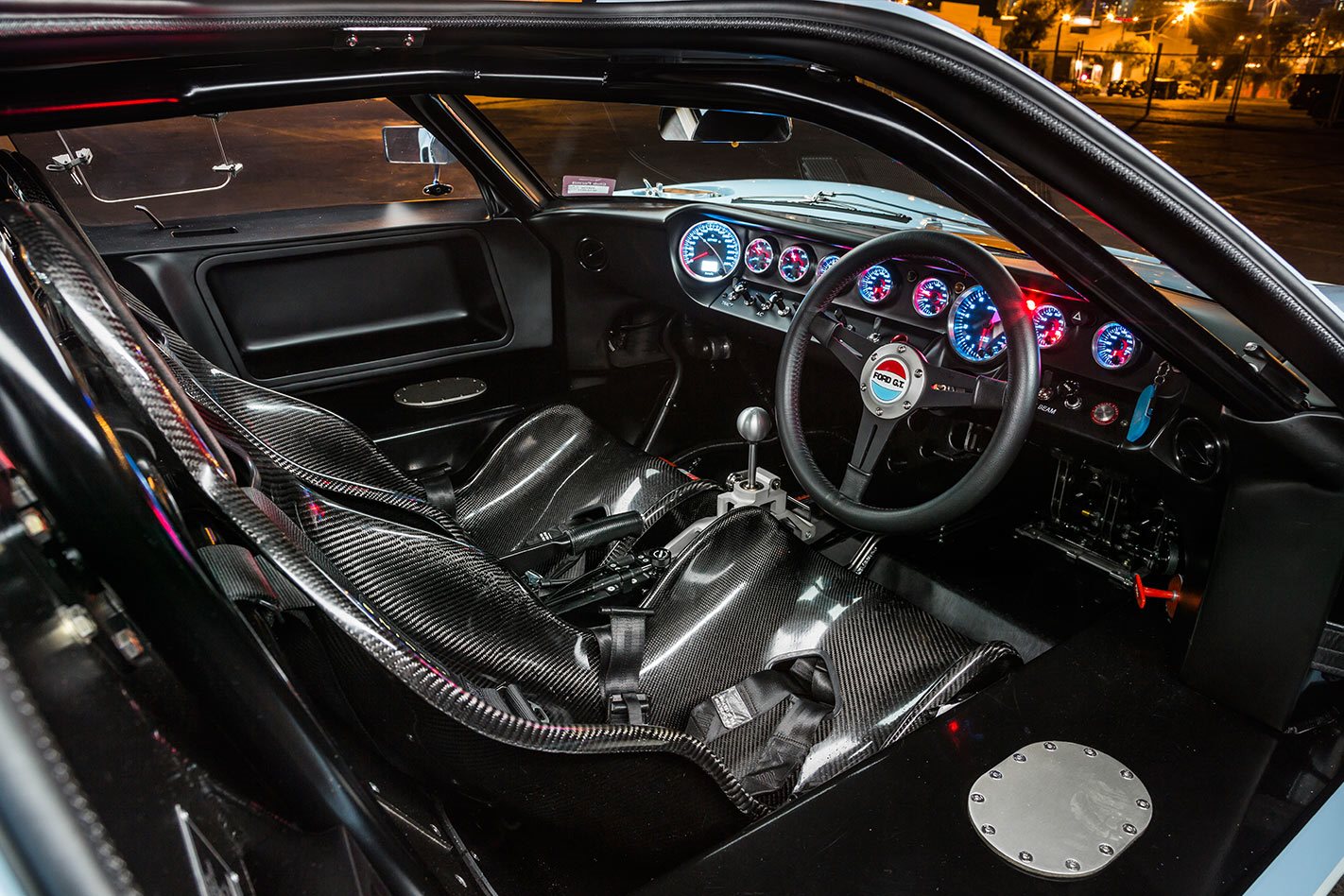 Given Jason’s mechanical engineering background and a long career supplying OEM manufacturers, it’s no surprise that this car looks like it’s been built by a team of professionals. 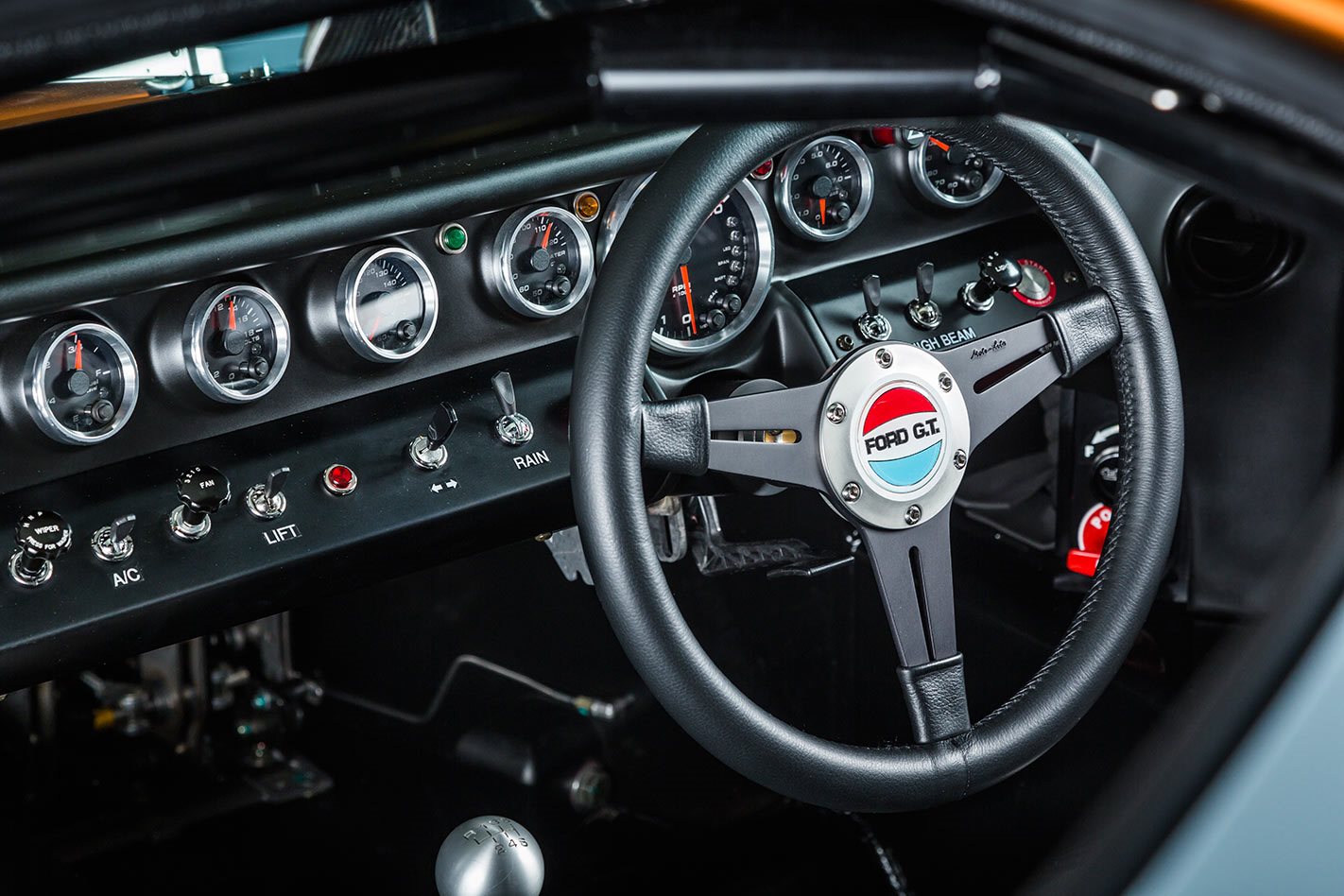 Inside is updated but keeps the 60s racing heritage with analogue faces on modern electronic gauges. Jason put in a matched set of custom Speedhut units and went to a lot of trouble getting the old Lucas switches and dials to work with the modern electricals

The good news for us is that Jason has recently started his own business, Renner Auto, creating modern replicas of some of the most iconic sports cars from the 50s, 60s and 70s. This means you can get all of the style with a modern chassis, engine and electrical system – guaranteed not to have any Lucas electricals! Check them out at www.rennerauto.com.au. 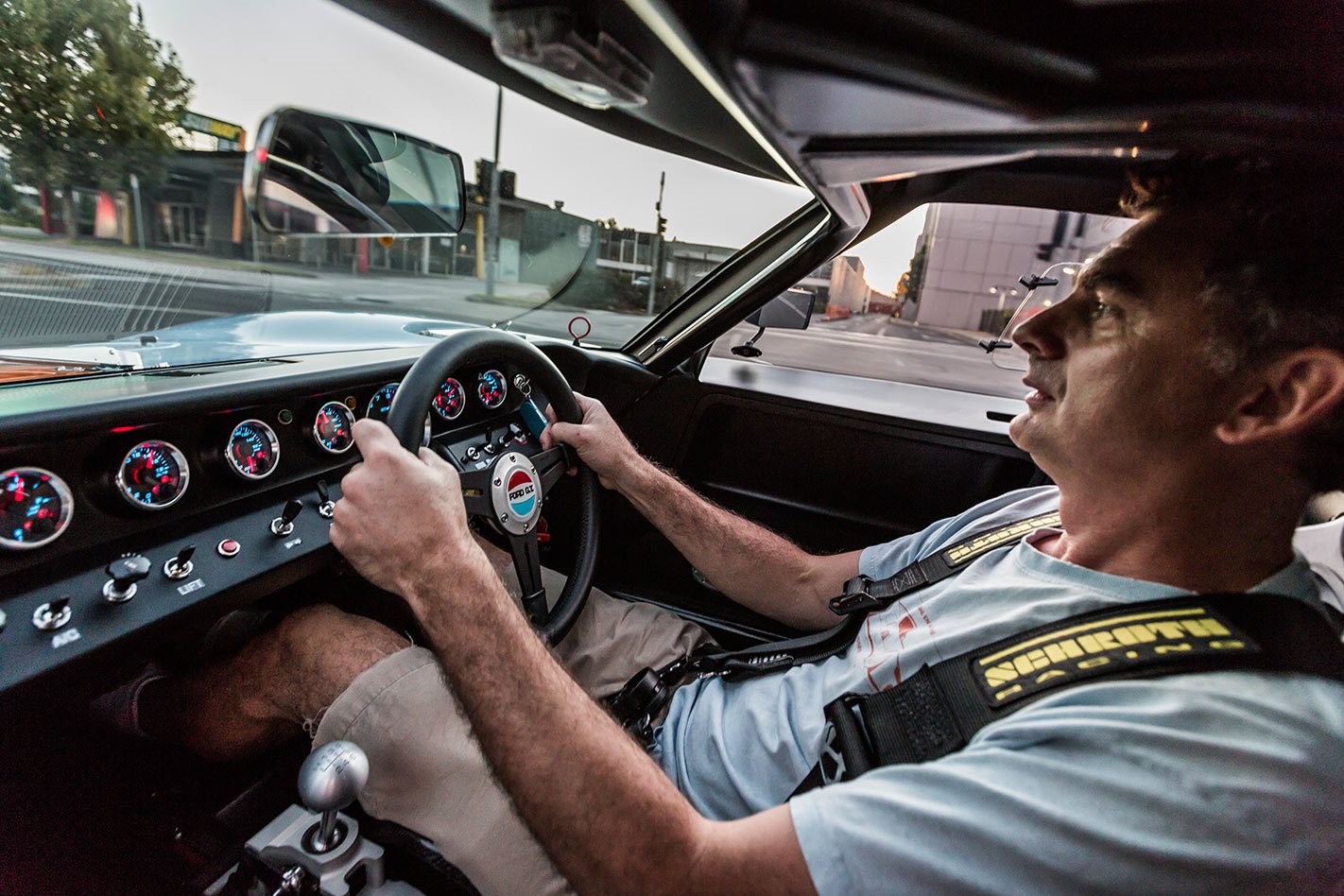