THE dead giveaways that this killer F100 was built by a mini-trucker are the tail-lights. Who knows how many early 90s Cadillacs have given up their lamps just to tidy up the arse ends of mini-trucks the world over? Well, the tail-lights and the fact this F100 can ‘lay rail’ as the kids like to say. 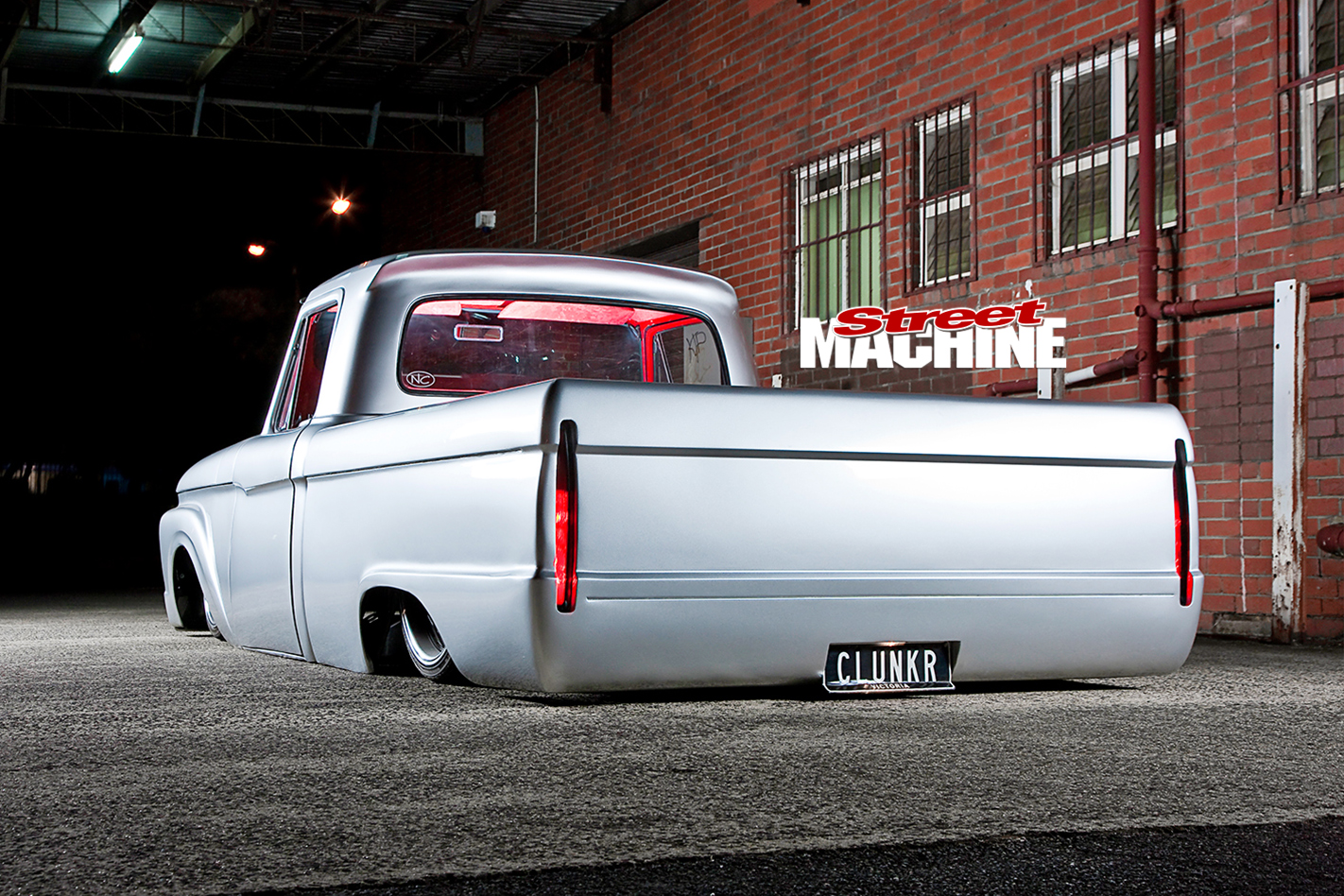 Jamie Smith ain’t no kid. He’s all grown up and he’s built himself a big mini-truck to suit.

“I had a ’98 Hilux that was bagged. I always wanted a full-size truck but I never had the cash. Everything I do is legit — I don’t drink, I don’t smoke. I wish I was shifty — I’d have better stuff!”

Jamie’s heavily involved in mini-trucking: “I’m one of the guys who started the East Coast Cruise. It’s the last weekend in November and heads up to Batemans Bay. It’s been going for 10 years and last year 10 guys got put into the Mini-Truckers Hall of Fame. I was one of them.” 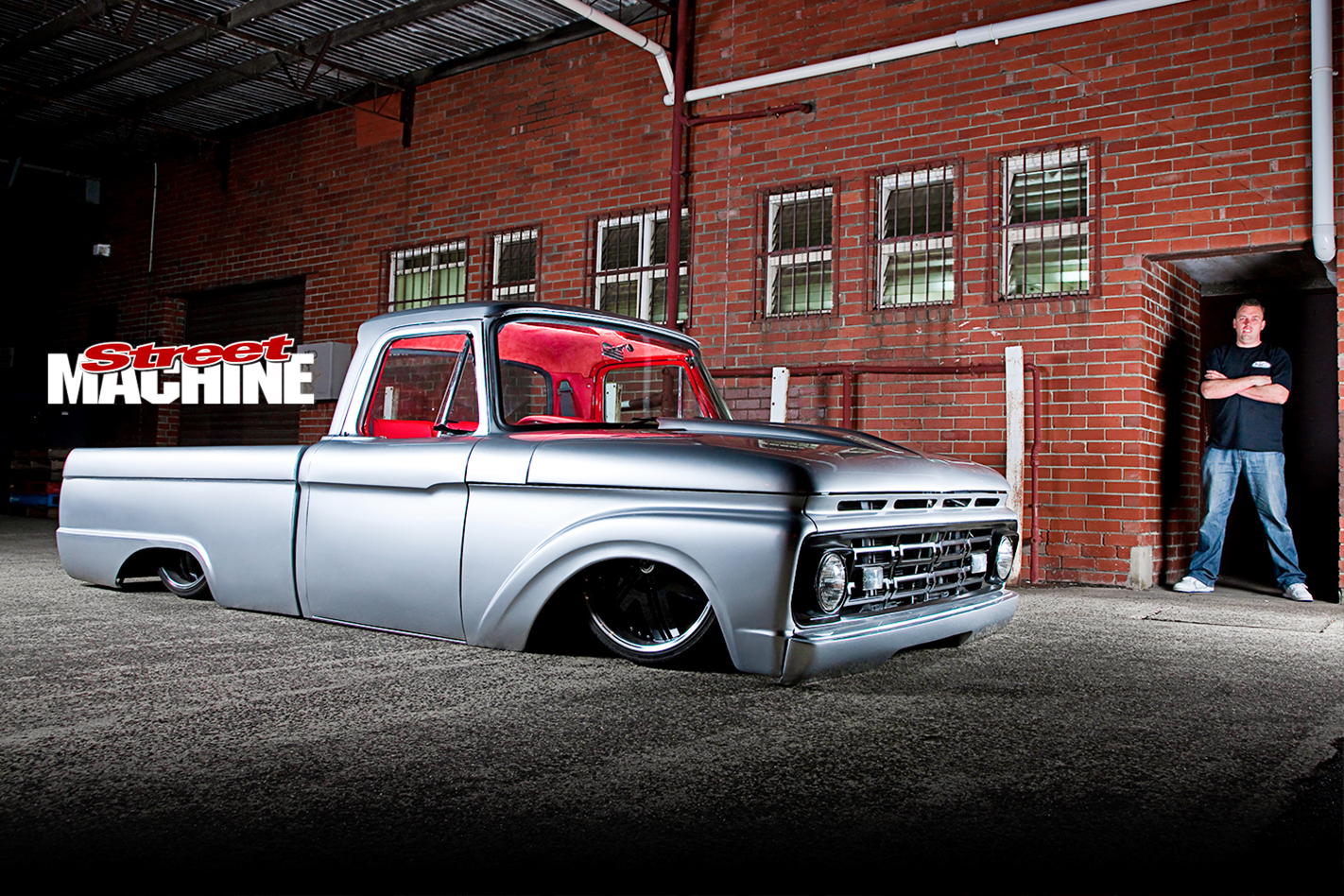 The Hilux is long gone but the Effie isn’t going anywhere. “I sold the Hilux when we had our first child because my wife begged. I told her: ‘If I sell it, I’m building something else so don’t bother having any more kids.’ She goes: ‘Yeah, yeah, no worries, one’s enough.’ And on 7 November last year we had the second one, when I’d nearly finished the truck. I said: ‘I’m not selling this one!’”

But with a young family, Jamie didn’t have truckloads of cash for a new set of wheels — a budget build was what he had in mind. 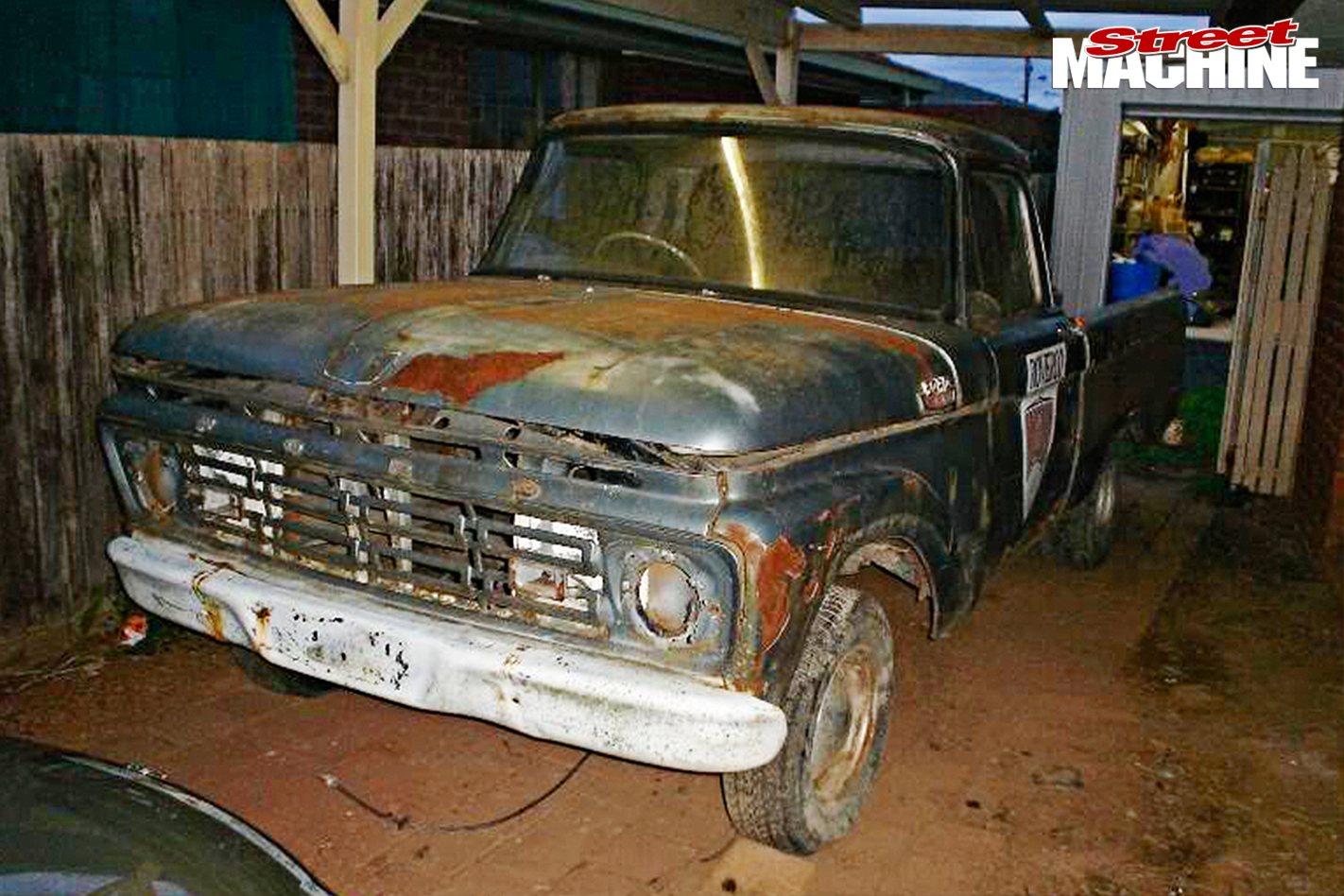 From there it’s just been plain old hard work. Jamie reckons the truck owes him 20 grand: “It’s just cost me time, this car, but the impact is amazing. It blows everyone away with how low it is. You hear people say: ‘Twenty-two-inch wheels and you can’t even see them!’

“It’s been to the Kustom Nats three times. Once it was just junk, with screwdrivers holding the engine in. I’m tellin’ ya, man, I shouldn’t have been driving it! 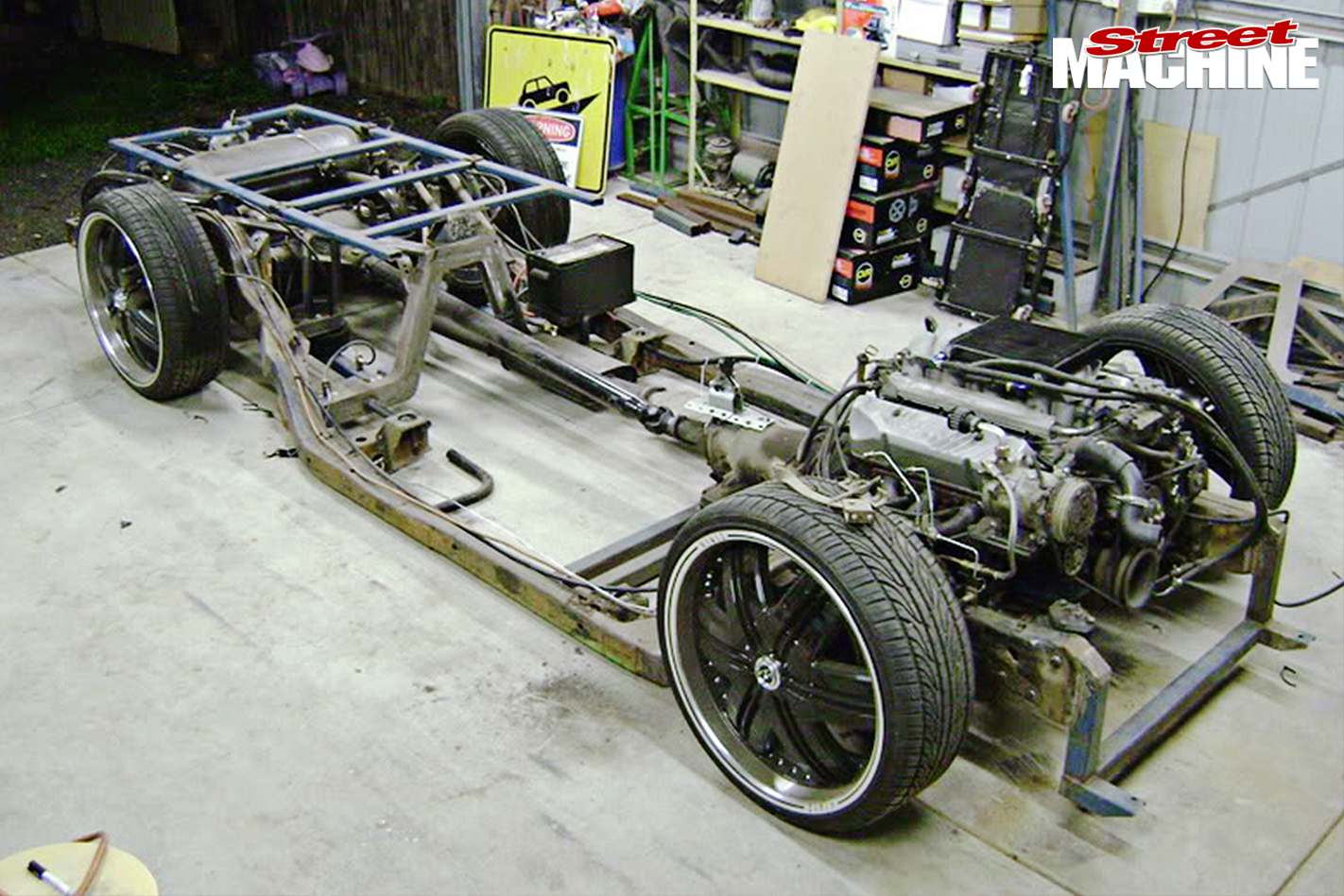 “It came home and got stripped, the chassis got sandblasted and two-packed, and all the running gear got done. At the next Kustom Nats it got Best Unfinished, and it took two more years to get where it is now.”

Where it’s at now is one of the coolest pickup trucks this country has ever seen, yet the whole thing was done in five years, at home in the shed, only being sent out for exterior paint. Jamie did the chassis work, body mods, panels and the rest of the paint — not bad for a bloke who makes his living as an auto electrician. 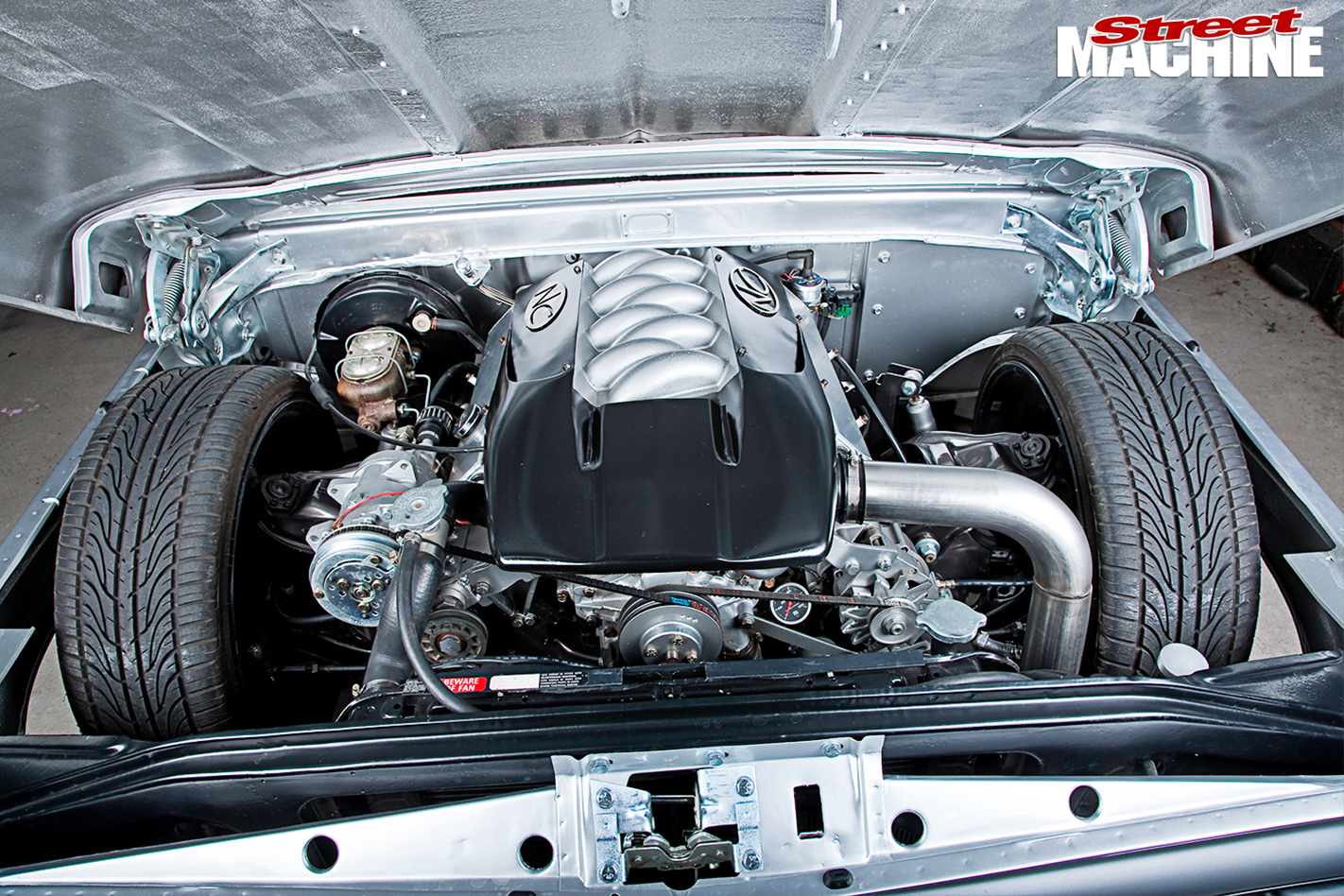 The job was made a bit easier by using an HQ panel van chassis. “I took everything I needed off the Ford chassis and swapped it to the panel van chassis. I did the Z-section on the front of the chassis [80mm] so the wheels would lay flat, then I modified the cab mounts off the original chassis and welded them to the Holden chassis so it bolted on like factory.”

The rear has a 200mm C-section from Air Ride to get it on the deck as well and the wheelbase was shortened to suit the F100. A triangulated four-link from The Chop Shop keeps the Salisbury 10-bolt on the straight and level through 300mm or so of vertical travel. 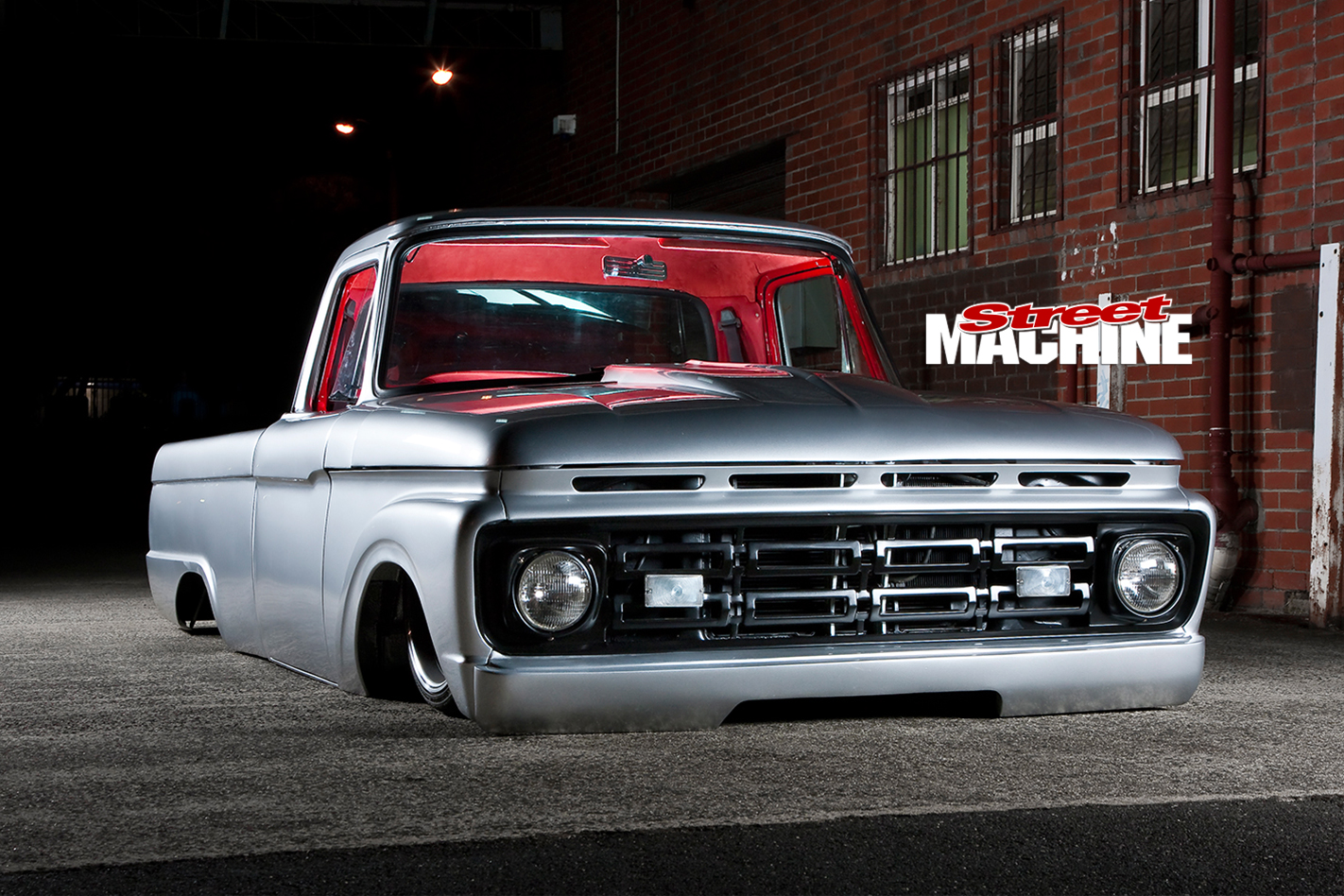 Airbags from Slam Specialties are filled from a nine-gallon tank under the rear of the tray. That’s pressurised either from an electric compressor or an engine-mounted unit that I mistook for an a/c compressor.

“That’s the pump that drives the airbags,” Jamie said. “It fills the air tank in about three minutes. The electric compressor takes 15 minutes, so I never use it.”

What doesn’t take long is getting it up off the ground: “It’s got GC Xtreme valves and half-inch lines. It gets up from dead flat to 300mm off the ground in about half a second. It nearly hops, it’s ridiculous.” 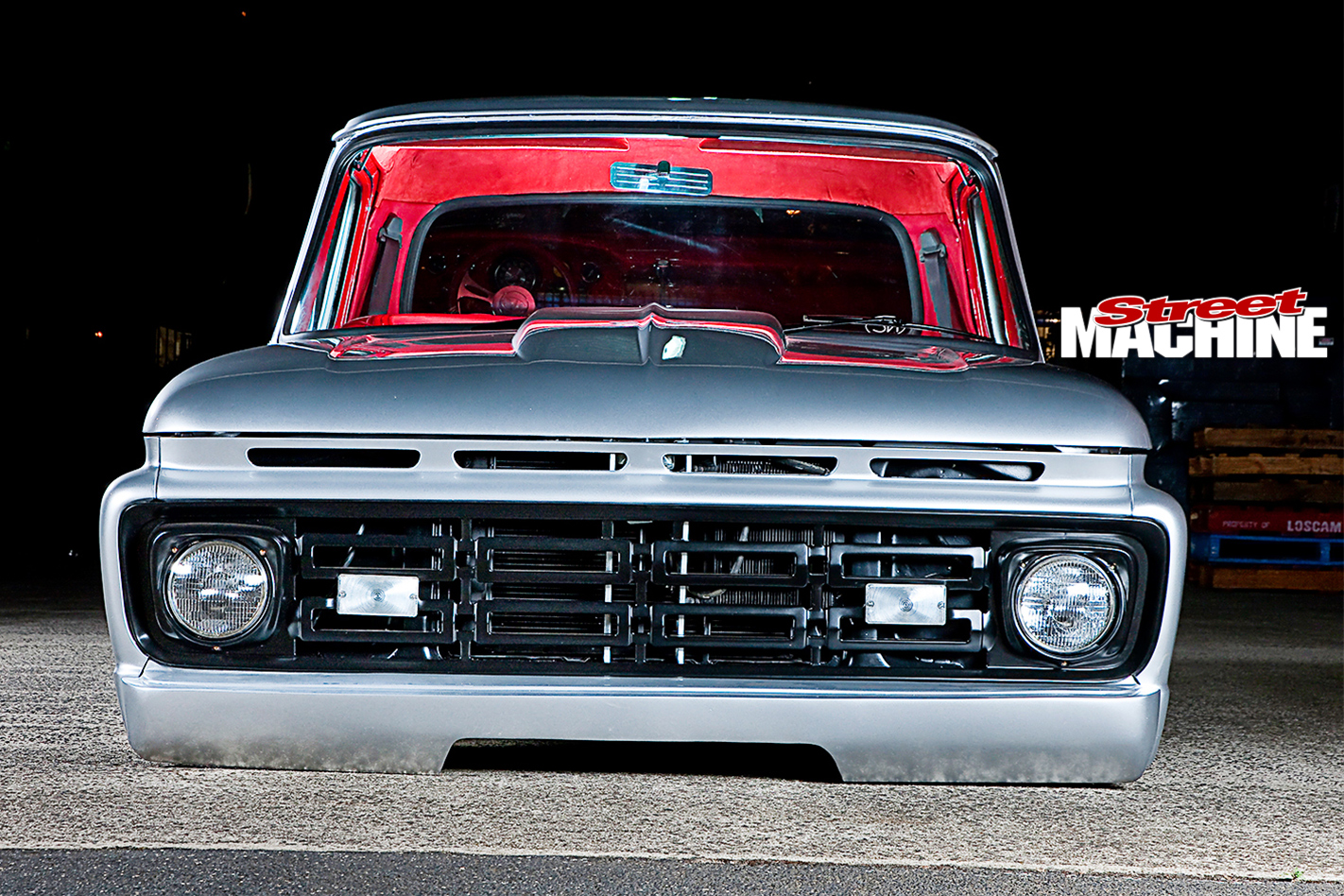 Another reason it rides so low is because of the body drop — channelling as hot rodders call it. It opens a new can of worms when it comes to lifting the truck.

As Jamie said, the truck was a rust-bucket but one section survived pretty well. “The only part of the tub that wasn’t really rusty was the floor. I beat it a little and made it nicer but it was okay. It’s not deep but it’s useable. That Speedliner stuff sprayed on the floor is the same stuff used by the army. They’ve got a Unimog sprayed 25mm-thick inside the floor and under the body. They reckon that’ll stop a bomb blast!” 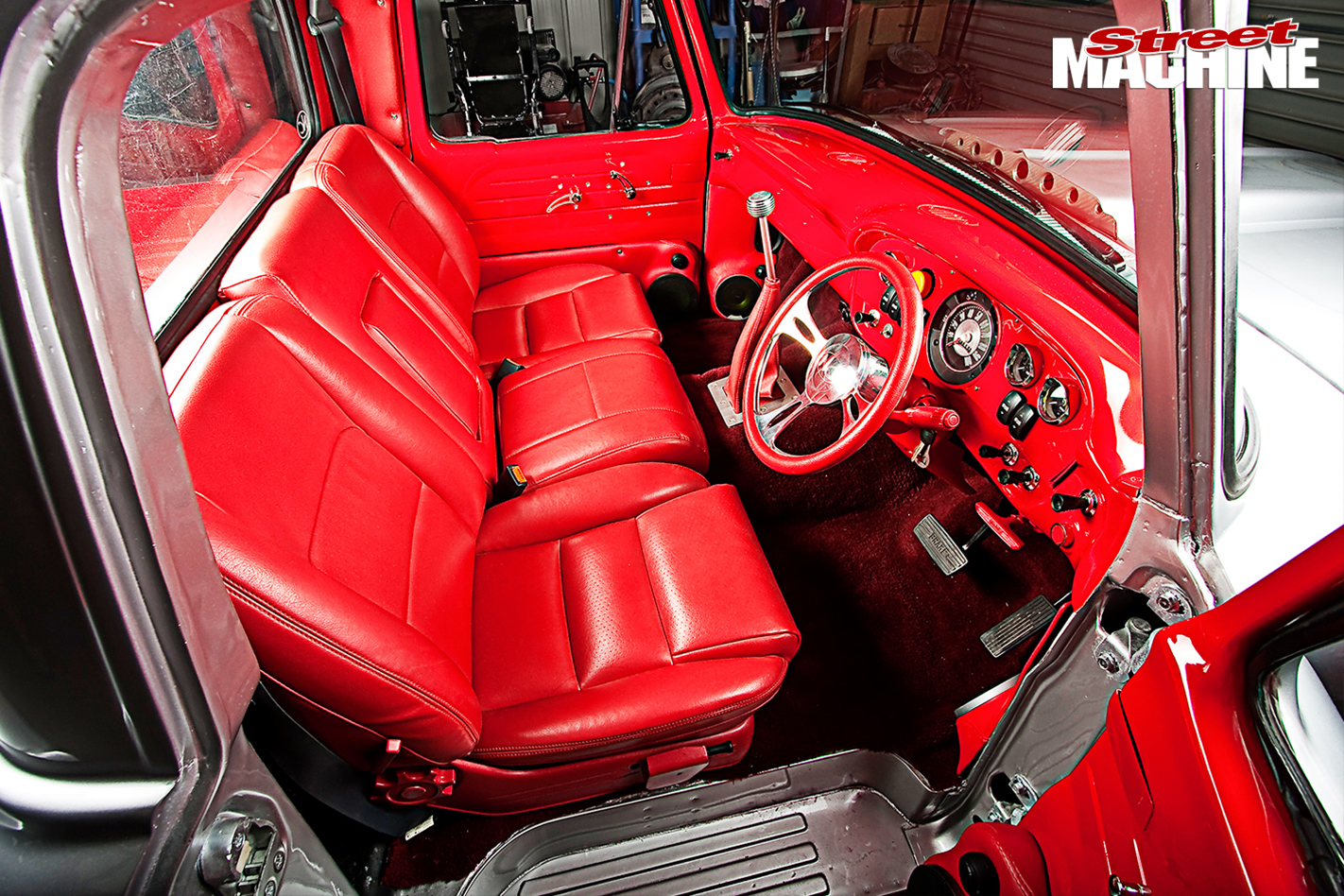 The red ties in nicely with the interior, which is way more up-market than your average farm truck. The seats are from a VR Berlina and the dash has been filled and painted in a matching hue. Extra gauges and switches for the airbags have been neatly integrated into the original binnacle and the bigger-than-Texas standard wheel has been replaced by a Billet Specialties tiller with a custom horn button featuring the Negative Camber club logo. 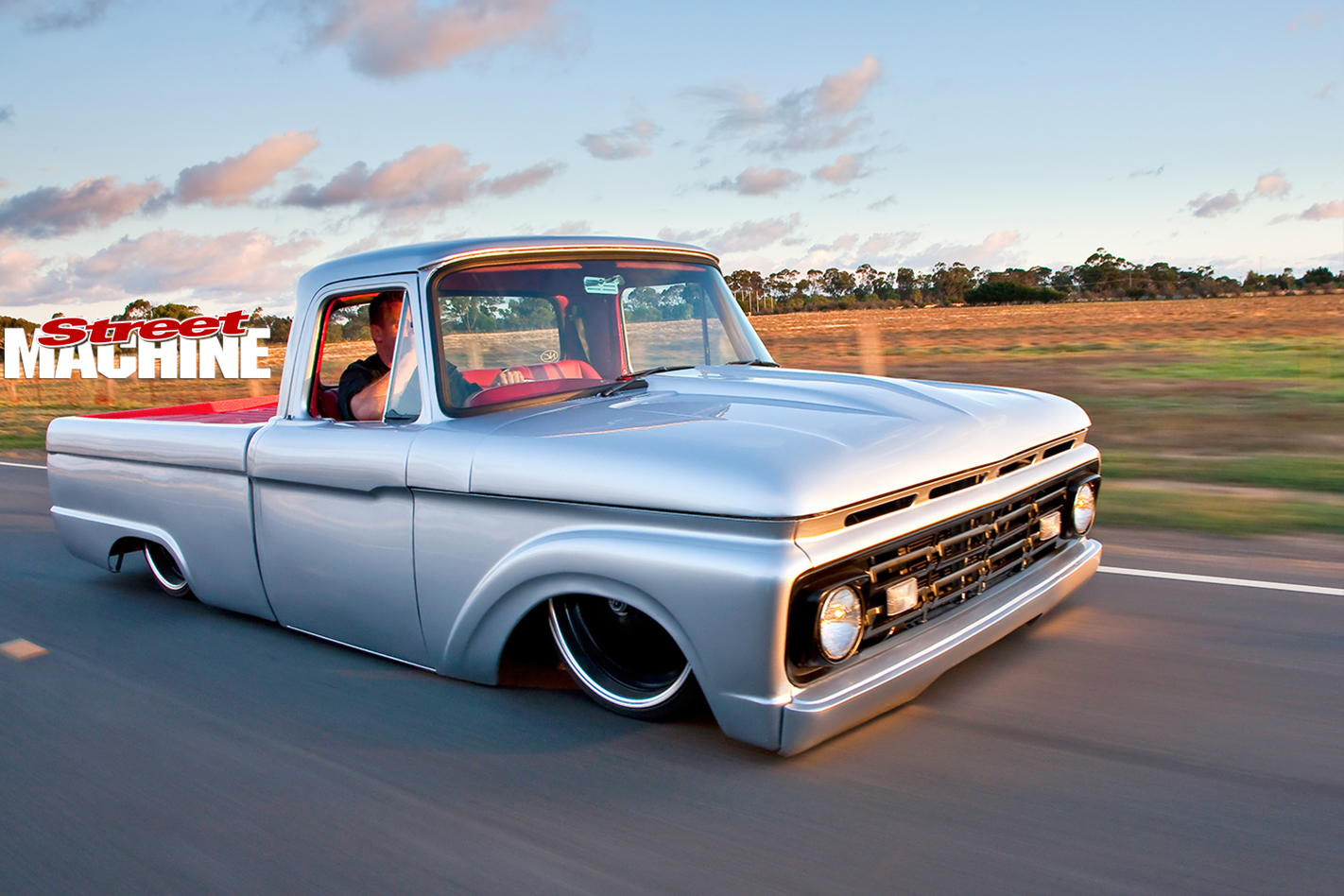 The one-piece hood lining is a nice touch but it took a little bit of stuffing around: “It’s from a VS Commodore wagon. I got a wagon thinking the width would be close to the F-truck cab and it’d give me enough length to have two goes if I stuffed up. I put the roof lining in and it missed by about a foot, so I turned it 90 degrees, Tek-screwed it in place and went: ‘Oh well, looks like I only get one go at this.’ I cut it and shaped it, got some fibreglass and moulded all the corners in.”

Yup, not bad for a sparky. 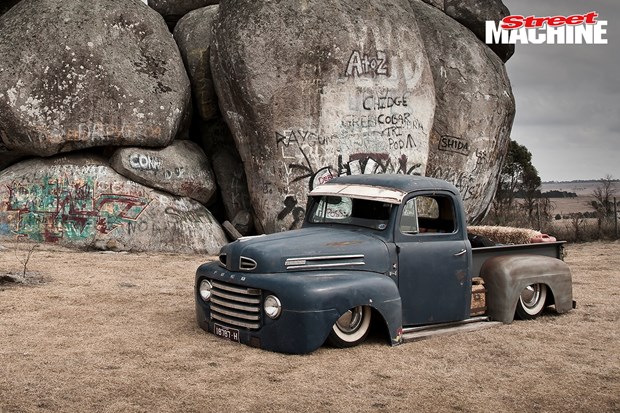