FOR Rod Vandersee, there was never a question of how he would build this car; it was only a matter of when. He had an image etched in his mind from the day when, as a five-year-old kid on his second day of school in the early 1970s, he saw one of Ford’s new Falcon hardtops burble past the playground.

Fast forward about 30 years. Secure and successful in his car sparky career, Rod had obviously been blabbing-on about getting a hardtop as his wife Tracey decided to hunt one down as a birthday present for him. 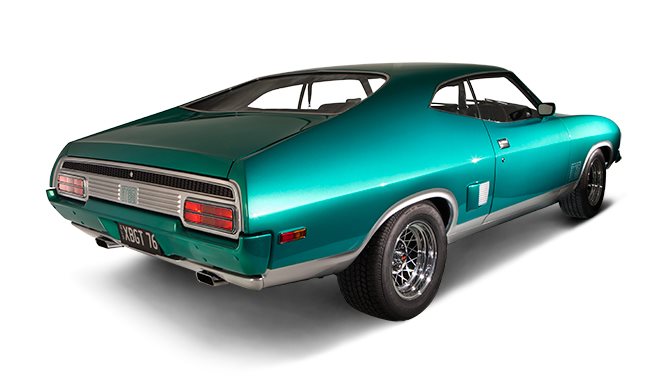 “It was going to be a surprise,” Rod says, “but Tracey had to involve me after she’d done some research. With a fair bit of money at stake, she couldn’t take too much risk on the car’s condition.”

The couple found their Falcon in Melbourne and brought it north to Emerald, central Queensland. Happy days.

Zap forward another five years. After occasional Sunday cruises, the classic Falcon two-door had been disassembled and blasted ready for Rod and Tracey’s planned once-in-a-lifetime restoration.

There are no tricks or tweaks with the bumpers and trims; it’s all factory fare. Finessing everything so it fits the car the best it can — let’s call it body blueprinting — really sucked up the hours

But instead of full steam ahead for a successful resto, after a faithful but flawed suggestion from a mate the classic coupe was languishing in a workshop in Broken Hill, NSW. That was on the back of a similar stay in the corner of a shop in Emerald. It was obvious things were not working out as Rod and Tracey had hoped. 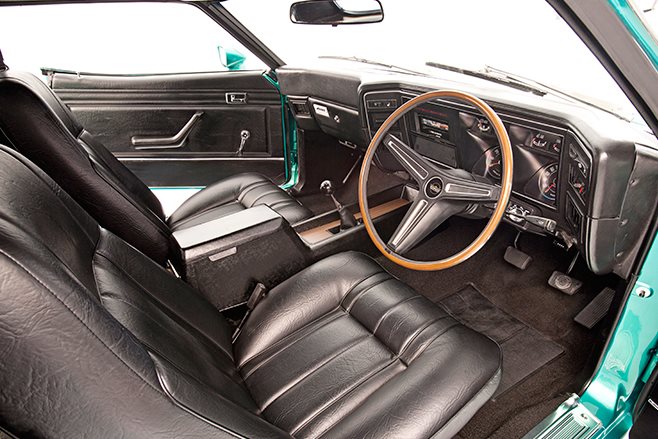 Rod reckoned the original beige trim would have been too stark. Leather was tried but didn’t have the right character so 70s vinyl does the job. Apart from the ‘6’ on the knob, this interior is era-correct and perfect

Then, through the old mates’ network, ex-Broken Hill resident and renowned Ford crafter Howard Astill found out about the going-nowhere-fast Falcon and contacted Rod to suggest he could sort out the body and paint. Hallelujah!

Howard dragged it back to his Wollongong workshop, ran the tape measure over it and declared that it had been hit in the driver’s side A-pillar and one rear quarter had been belted from behind. 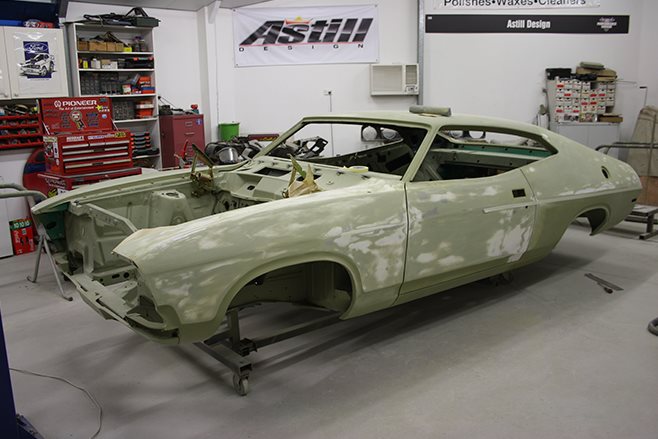 “It had been repaired but not as well as it should have been,” Howard says. “It was acceptable for the time, and probably for the age of the car as it was then, but the further we went, the more we found. Even the roof had been jumped on.”

It gets worse. Due to the car sitting naked for so long after being totally stripped, rust had taken hold in several places inside the shell, too. With both men holding high expectations for quality, Howard was blunt: “I said: ‘Find another shell.’ Rod said: ‘No, we can’t do that — this is a GT.’” 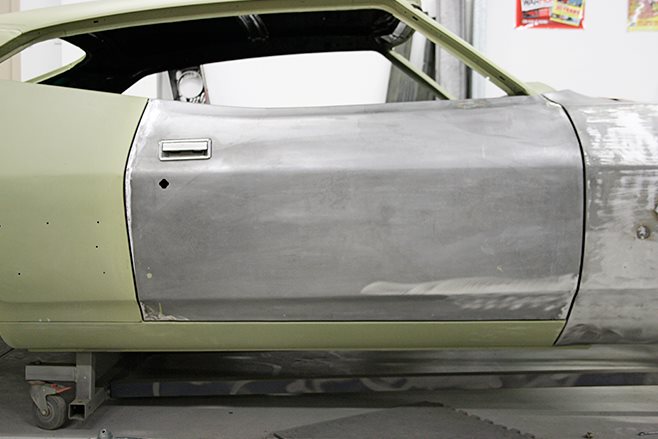 Many hours were spent pushing and pulling the panels to get good alignment. Some edges needed 7mm to zero tapered fillets added to get those taps, along with rust repairs and fixing the holes left by 80-era speakers

Rod continues: “We weren’t especially looking for a GT; we just wanted a Falcon that was as good as we could get. It just happened that the best car we found was a GT.”

That decision made the repairs an enormous task, with Howard almost totally disassembling the shell above the floors and sills. But the comprehensive strip-down brought advantages too: “It allowed me to get behind the rear quarters; you can’t do that when they’re welded on the car,” he explains. 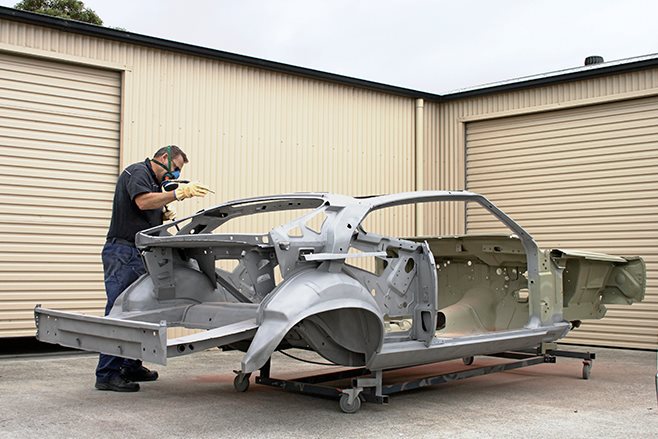 Unpicking those lithe rear quarters from the shell to repair inner damage gave Howard the opportunity to reshape them perfectly before final assembly. No bog in these!

The idea, of course, was to get Rod’s car looking as close to perfect as possible. But what does the perfect Falcon hardtop look like?

“If I saw a coupe at a show or wherever, I photographed it,” Howard says. “They’re all different! That meant I had the freedom to put the best shape possible into the quarters.” Only when he was happy were they welded back into place.

Yet even with the extensive repairs, the car carries most of its original metal, including the tail-light panel, plenum, boot floor, roof skin and those quarters. 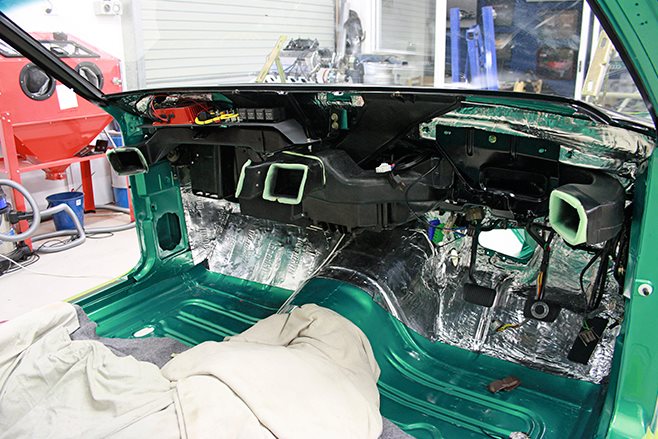 Everything behind the dash was stripped, painted and plated to original spec. The factory air-con unit was restored, with a modern Sanden compressor for those 40-degree days in Emerald

Straightening the bare body was one thing; planning the specification and finish of the car was a whole new task.

“Rod and Tracey came here and we sat down with a pen and paper and began making a list,” Howard says. “The list became exhaustive but it all needs to be considered and budgeted in.” 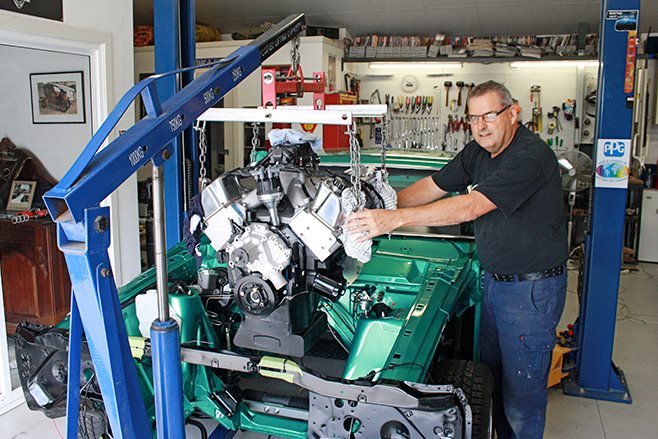 Rod and Tracey’s Falcon was one of the first cars to use the new aftermarket Arrow Cleveland block, conceived and developed by Headtorque in Perth. Compared to the last Aussie Cleveland blocks cast in the 1980s, the Arrow block features several improvements while using all standard components

Funnily enough, until this stage it had all been phone and email — Rod hadn’t twigged before that the bloke working on his coupe was a multiple Summernats Grand Champion and SMOTY winner.

“Up until that stage, I just knew ‘Howard’ as some body bloke,” Rod reveals. “It was only when I arrived at his place and saw the trophies and some posters on the wall that things clicked. I was looking around and thinking: ‘I know that car, and that one, and that one!” 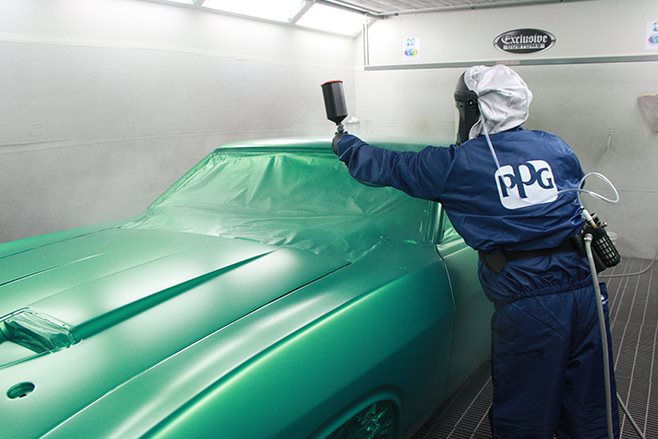 The paint is the work of Glenn Coburn at Exclusive Customs on Sydney’s southside. It’s the original Ford Cool Mint Green colour replicated in PPG product, and replaces the respray red the car was wearing when Rod and Tracey bought it.

“It was important to achieve a factory appearance,” Glenn says. “It couldn’t be show car glossy in the engine bay or boot, so we mimicked an acrylic finish using two-pack.” Yes, in case you hadn’t noticed, the car is a ‘restification’. “But I wanted high-quality detailing,” Rod says. “And a bit of technology under it to make it drive better.

Everyone around my way has a late-model V8 — I wanted to stay in the race!” 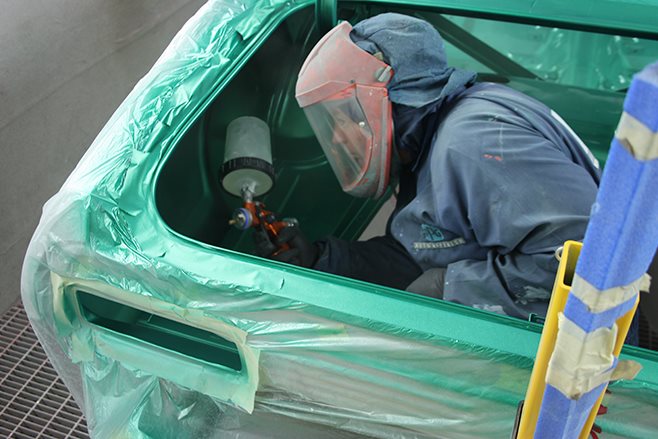 To that end, the list included RRS suspension, a six-speed gearbox and nearly 700 horsepower!

And to help the wish-list come true, Howard approached Sam at Westend Performance for the engine.

“I suggested a Dart Windsor,” Sam says, “but they were set on having a Cleveland. The problem with that from an engine builder’s perspective is that after 30 or more years, they are stuffed due to corrosion and wear.” 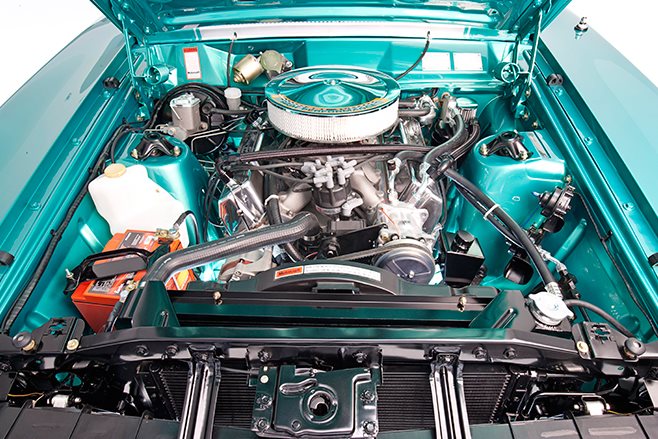 Arrow-blocked, CHI-headed carby Clevo sits at 427ci and 680hp. Rod’s an auto electrical and air con guru, so he and Tracey won’t raise a sweat when they’re out cruising

That problem was solved thanks to the new Arrow block. Sam assembled a tough 427-cube street motor with Scat crank, JE pistons and CHI alloy heads. It breathes in through a 950cfm Holley, and exhales through ceramic-coated Pacemakers.

“With around 680 horses, it’s actually quite mild compared to what the hardware is capable of,” Sam says. “But being in a street car with a manual gearbox, we didn’t want it kangarooing around or doing anything silly.”

And Rod is very happy. 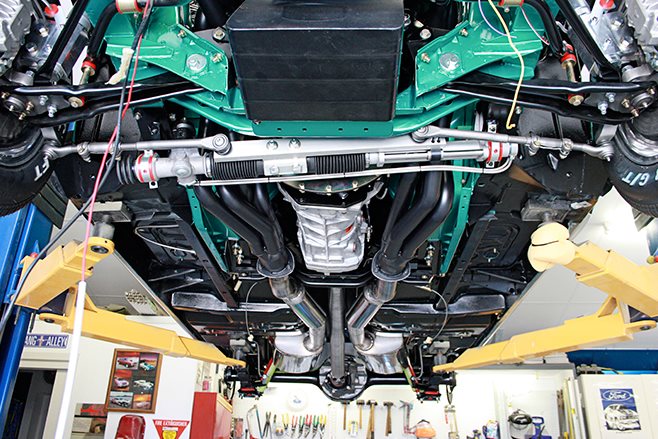 Howard liaised with Variflow's Craig Potts to work out the dual three-inch system that runs Di Filippo mufflers and H-pipe. "It needed to look original. That meant square tips coming out in the original places"

“It idles at 950 and it doesn’t pig-root around. I haven’t run it hard in the car yet but it was run-in on the dyno. I didn’t want to dawdle around in something that looks as good as this without a bit of power. Plus, I think we’ll only build one like this, so I wanted to do it well. That’s why I went with the six-speed and big brakes as well. You can’t make it go but not stop.” 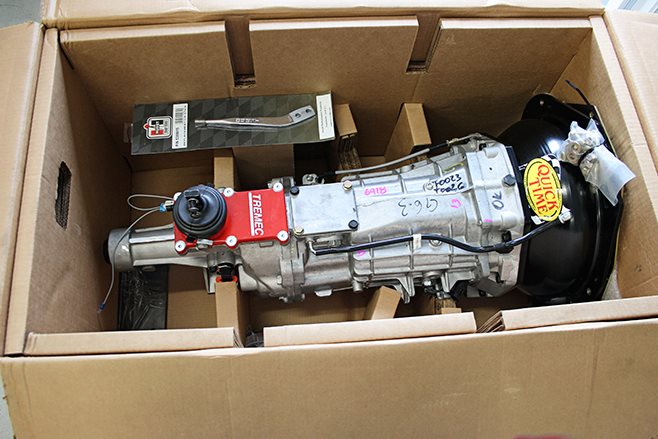 Behind the healthy born-again Clevo is a Tremec T56 Magnum six-speed gearbox package from Mal Wood Automotive. A Strange nine-inch from Rocket tags along behind a three-inch thick-wall tailshaft. The brakes are from RRS, as is the whole front end, using the innovative company’s power-assisted rack and pinion system and struts in place of the Falcon’s old-school box and antique see-saw suspension set-up.

Finding the old-school Hotwire wheels was hard work but with a sweet twist. “I’d been looking for two years when Howard told me they were about to be reproduced,” Rod says.

“He wanted more rim and less tyre but out where we are you can’t get away with that — there aren’t any smooth freeways where we live!” 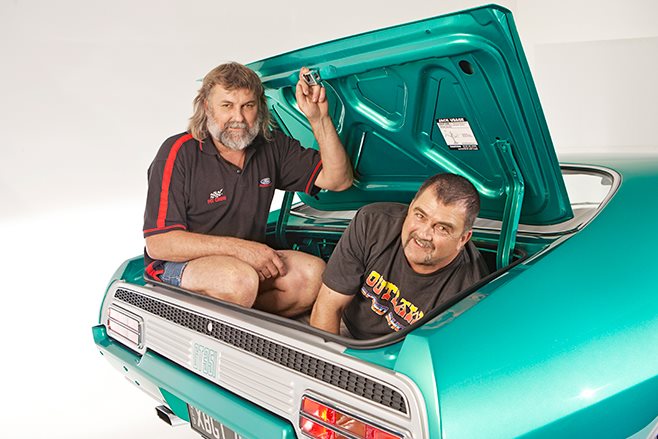