HOWARD Astill’s Rock Solid XA Falcon GT was originally featured in the July/Aug 1986 issue of Street Machine. It was featured again as Rock Solid II in SM, April/May ’89. That same year, the car scored four awards at Summernats #2, including Entrant’s Choice. It was then given a massive revamp as Rock III and featured in the June 1990 mag. In this guise, the car won a heap more goodies at Summernats #4 in 1991, including Top Judged and Top Street Machine Overall – the precursor to today’s Grand Champ. Let’s check it out in Rock II form: 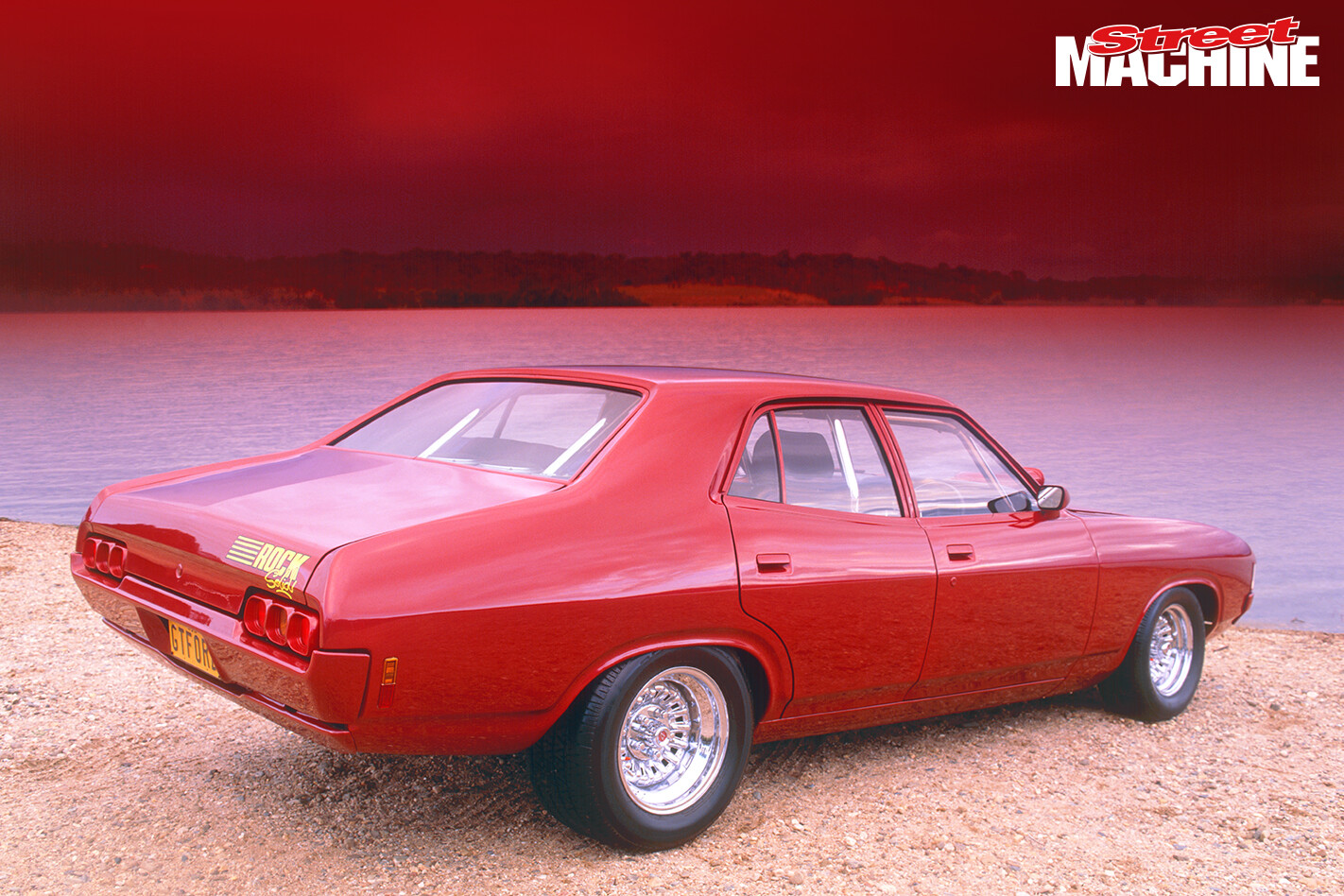 An unbelievable car by anyone’s standards, Rock Solid II’s especially amazing because all that show-stopping work’s been done by Mr Astill himself. It’s Howard’s personal statement of his street-machining artistry. And his superb creation speaks volumes for that. 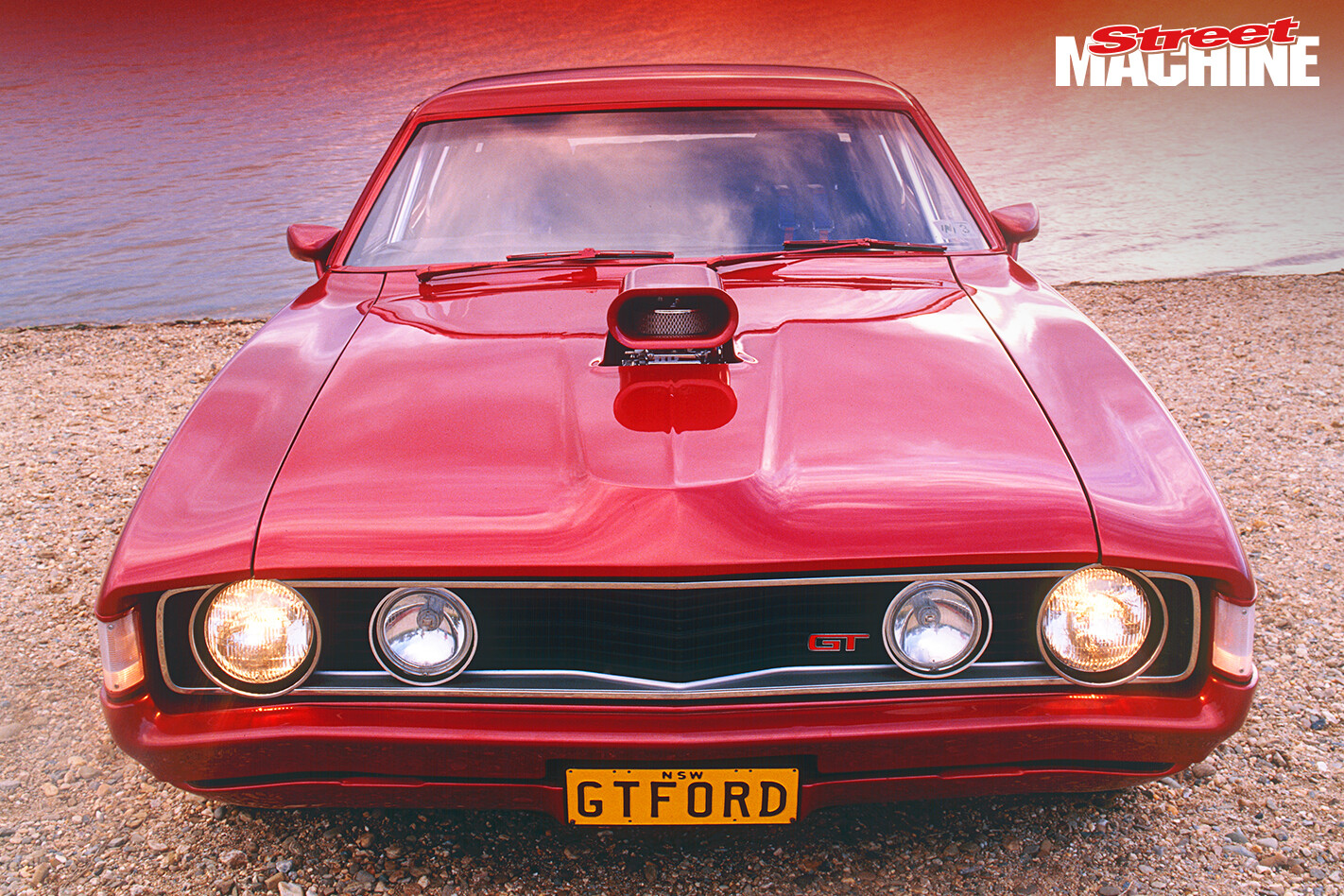 Howard went back to the drawing board after Rock Solid failed to impress the judges on its big show debut, three years before its Summernats ’89 triumph. He felt he had no apologies to make for the car but realised he had to catch the eyes of the judges with a refinement of what he already had. Attention to detail and no-argument top engineering were the answer, he felt. And when Howard Astill of Broken Hill pays attention to detail, you’d better believe it.

That attention to detail is apparent everywhere you look. And Howard’s intelligent approach to his work shows in the fact that everything can be maintained and cleaned with a minimum of fuss. Smart guy, Howard Astill. 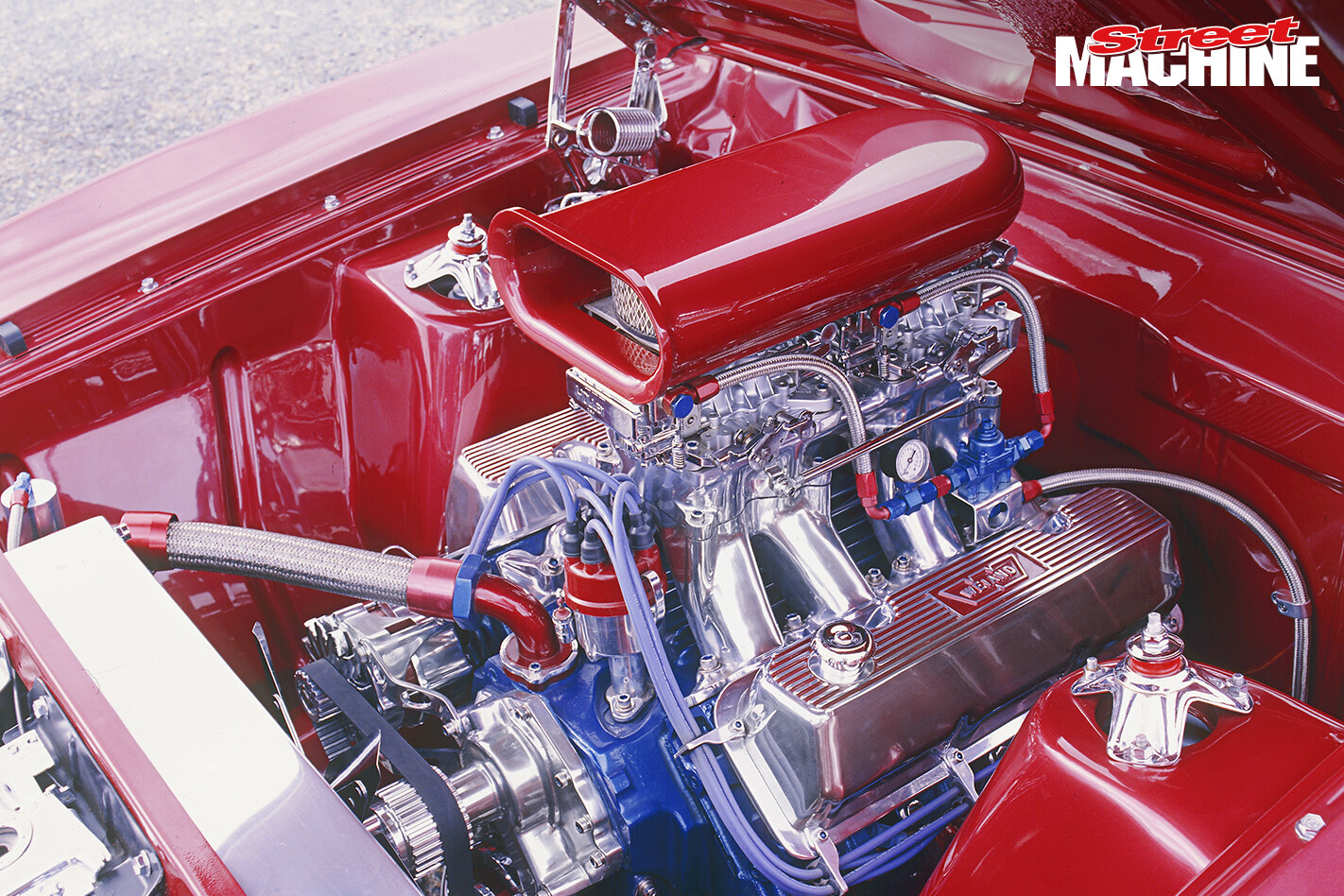 After his ’86 show let-down, Howard stripped and jig-mounted his XA four-door body, and proceeded to replace probably 80 percent of the floorpan with 1.6mm plate, welded and join-filled. The front crossmember was seam-welded and boxed in. All the chassis bolts were shortened for a cleaner look and the threads were welded into the chassis. Spring mounts were plated, ready to receive the coil-overs, which were eventually firmly seated in welded mounts. The ladder bar crossmember was handmade from seamless tubing, and a homemade Panhard rod eventually fitted. The engine bay was taken back to bare metal and was seam welded. 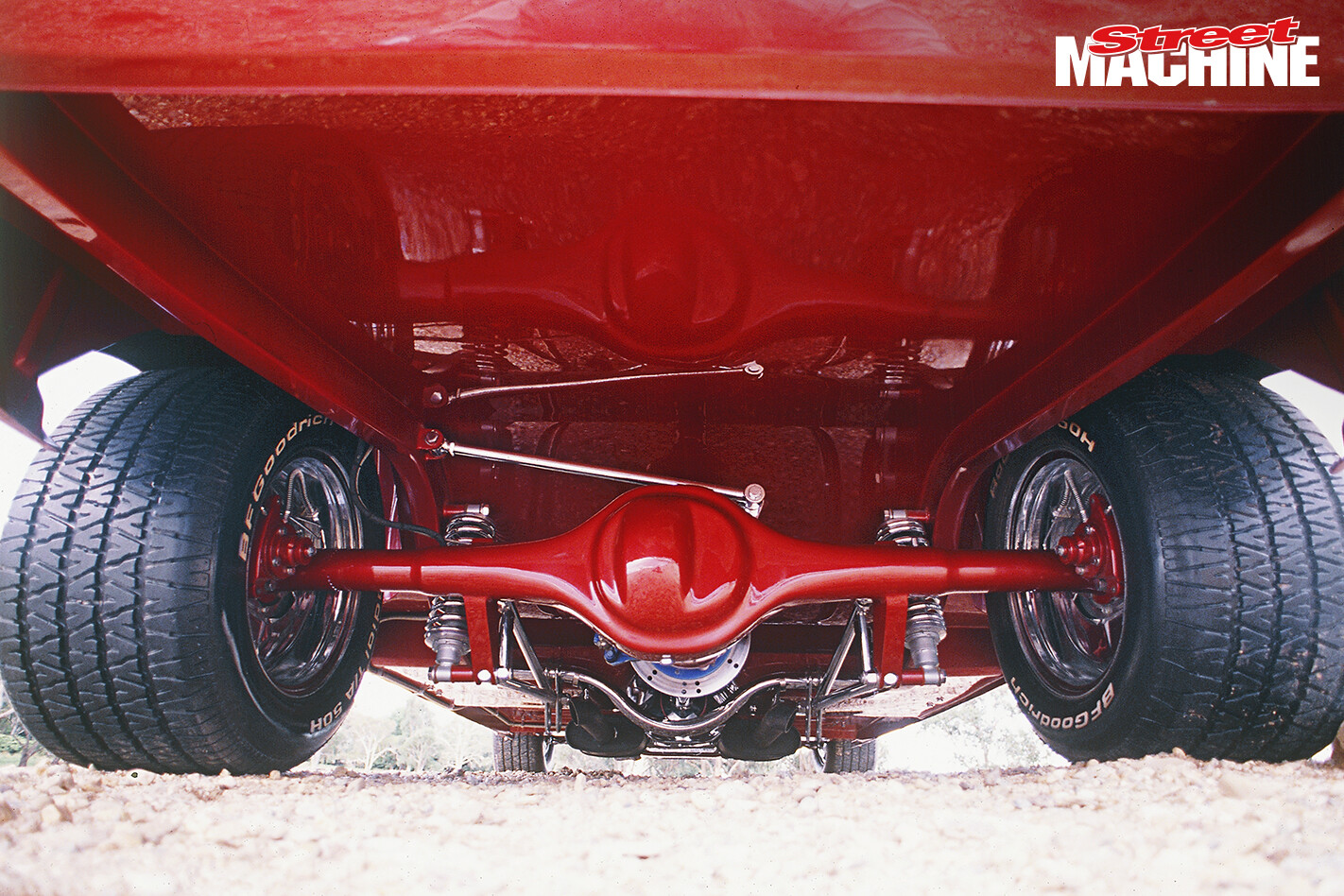 The firewall was lengthened with plate steel, which now meets the chassis and sill panels, and all cable holes were filled. Engine-bay sides were seam welded to the firewall and radiator supports. Stamped indents in the driver’s side of the firewall were boxed and all wiring to the engine went into a pipe located under the XB steering column. Inner front splash panels became easy-clean 1.6mm plate and the rear engine mounts were flicked and replaced with fully removable boxed items. Even the seat mounts copped stronger double panels.

Howard’s left no stone unturned – and that’s one of the things that so impressed the Summernats judges. It’s all first-rate craftsmanship performed with intelligence and hard, hard work. When you learn that Howard performed all his engineering work with a belt sander and not a lathe, you have to be doubly impressed. 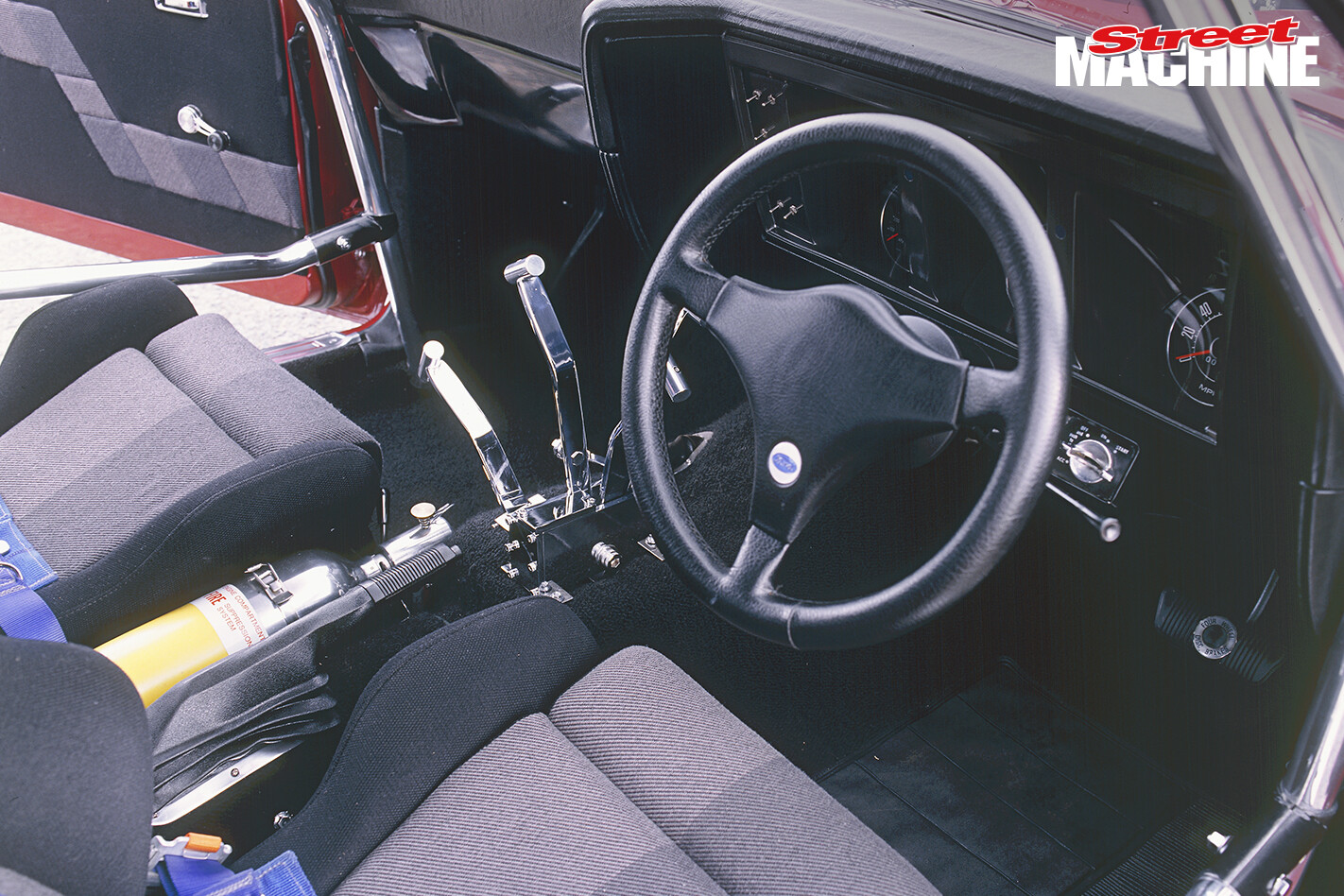 The Astill-made aluminium gear in that incredibly clean engine bay is a prime example of Howard’s do-it-yourself ingenuity. Everything from headlight brackets to steering-column surrounds and plug-lead holders were developed and hand-built by Howard himself. Stuff like the beautiful carb lever and throttle-cable mount (linked to a shortened Laser cable), top and bottom radiator mounts and overflow bottle, distributor hold-down and those neat line clamps were made with the help of the ol’ belt sander.

The body and interior are a tribute to Howard’s hard-work approach to perfection, too. Take a good look at the photos and you’ll see stuff like extended and aligned sill panels, flush-mounted and machined door handles, fuel filler-less rear quarter panel, bumpers without bolt heads ... and a whole lot more. Then check out the interior with its custom dash – less glove box, side vent and hand brake – polished eight-point Bond cage, four-point harnesses, Recaros, custom triple-tube instrument cluster, Pioneer stereo, Formuling steering wheel and ... Jeez, where do you stop? 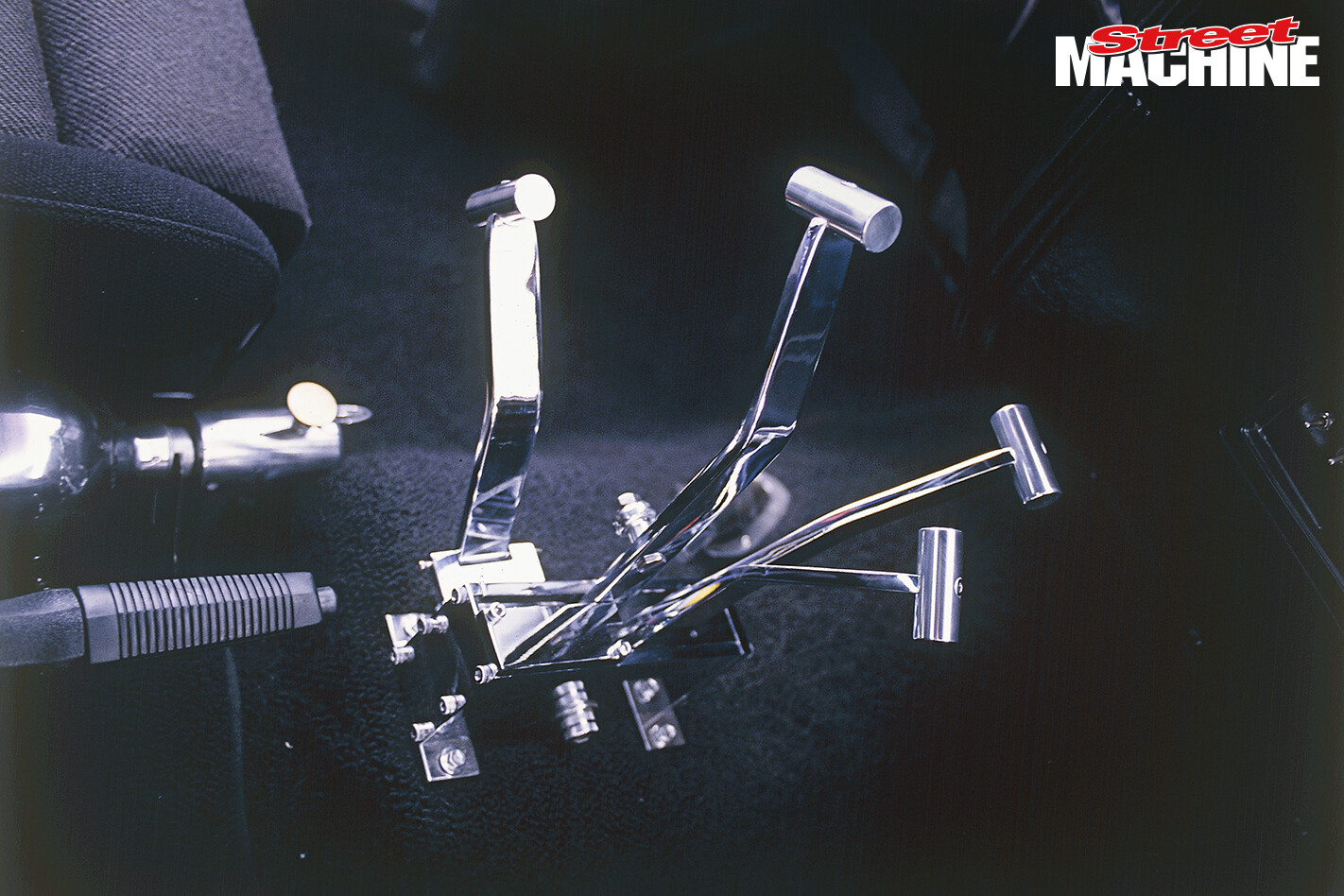 It’s not all for show, either. That prize-winning engine bay houses a 30-thou-over Cleveland Astill worked to the max and fitted with a Price Engineering sump and windage tray. The crank and conrods have been polished, magnafluxed and shotpeened. Pistons are flat-top Speed-Pros with Speed-Pro rings. Heads are 2Vs, ported and polished to 85cc volume, with Genie headers and a Walker Dynamax 2½-inch system bolted to one side and twin Holley 450s on an Astill-worked Weiand tunnel-ram manifold on the other. 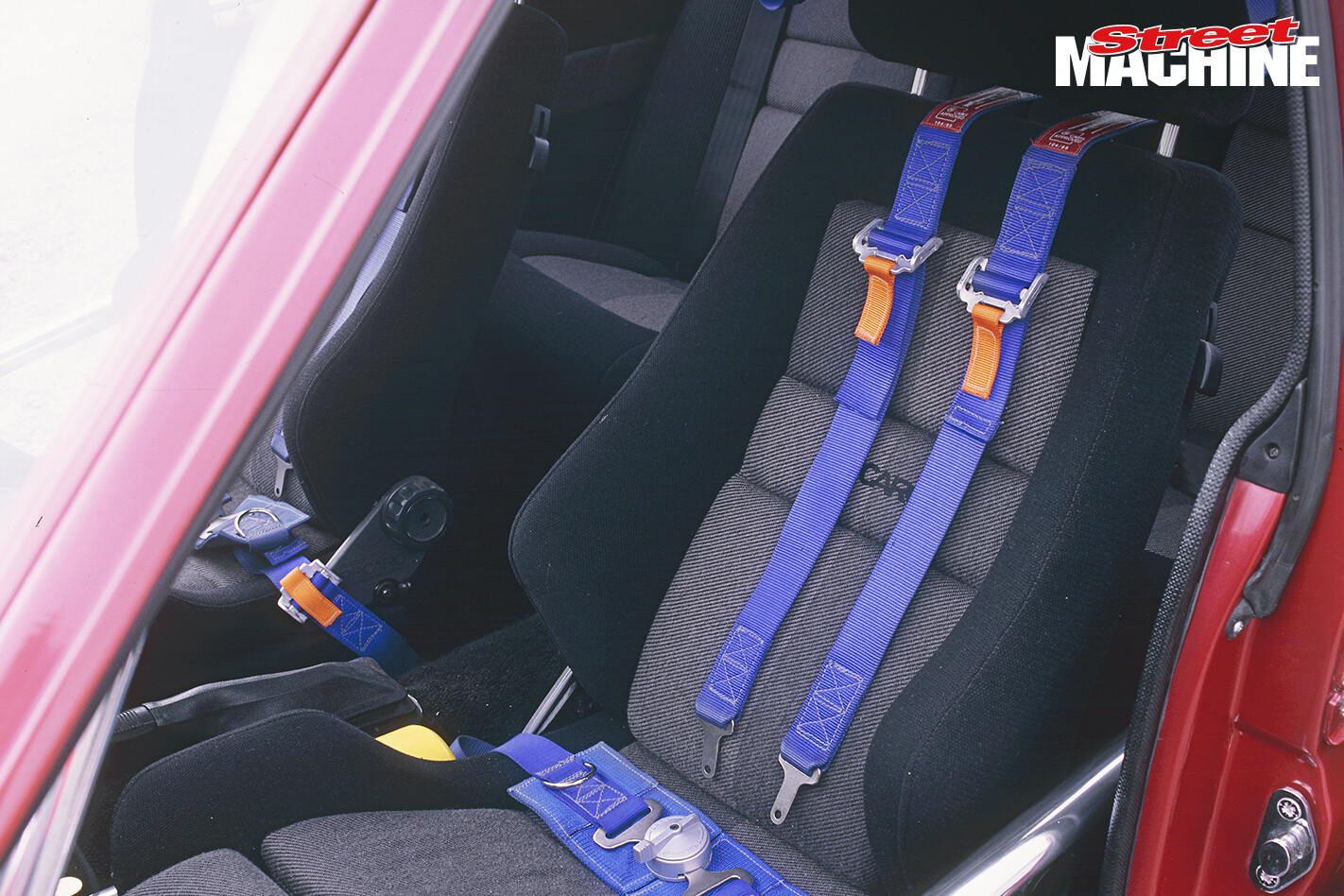 Valves are TRW 4V single grooves on both sides, actuated by standard rocker arms, TRW springs, stock rods, TRW lifters and a Crane Fireball cam, all hooked up to a TRW chain. Fuel gets there via a Holley Blue pump and the lot’s kept cool by a Gilmer toothed-belt system, thermo six-blade fan and an XE crossflow radiator. The Mallory coil’s placed racecar-style under the dash.

The considerable power and torque from this beautiful, tough Clevo passes through an FMX with 2800rpm stall, B&M transpack valvebody and an octopus-style Bob Sherry manual shifter to an Astill-tricked nine-incher running 4.11s and disc-braked axles. And there’s a Kawasaki disc and caliper tranny parking brake mounted to the pinion. Howard picked up that little trick from the US car mags and says he’s glad he did. 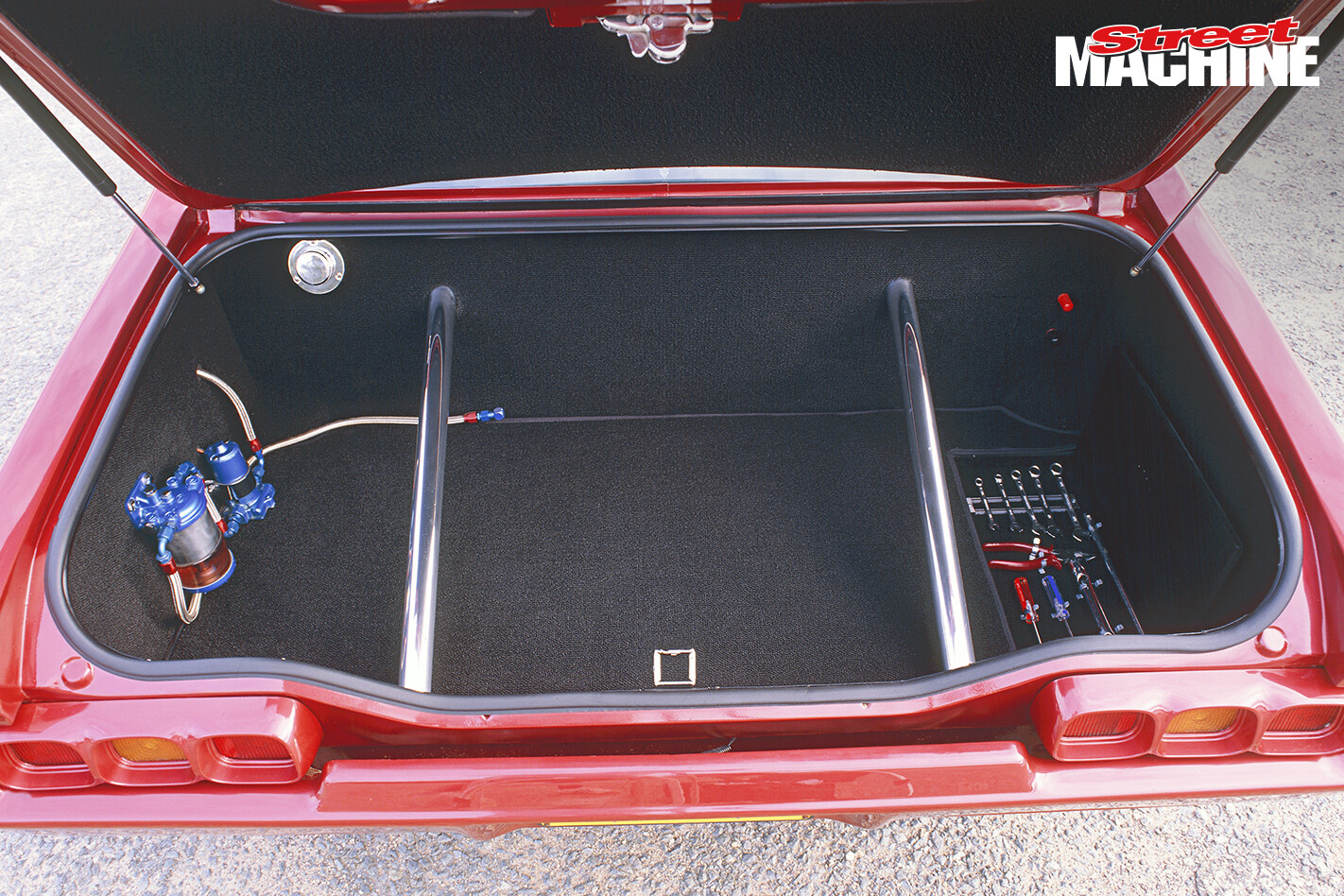 You’ll see Appliance Strikers, 14x7s and 15x10s running 235/60-14s and 295/50-15s in the photos. In fact you’ll have to rely on these snaps – or a half-hour walk round at its next show appearance – to reveal some of the masterful touches in Howard’s epic XA. There just aren’t enough pages to tell you about every clever nut and bolt. That’s how good it is.