Father and son roadtrip with a HSV SV300: classic MOTOR

Julian's got a HSV. Ollie just wants one. We cut them loose in the SV300 for a weekend of high-speed father and son bonding

It’s Wednesday and your mobile rings and it’s Geditor Buly-Buly on the line, asking if you’d care for a weekend of boom-shaka-laka with HSV’s new GTS stand-in, the SV300. What do you do? Tip everything out of your diary for Saturday/Sunday and play the Gen Y sorry-I’ve-had-a-better-offer card? Or regretfully decline the opportunity to stampede 420 horses, pleading prior social obligations?

Er, lock in the naughty weekend thanks Eddie. This is a Big Kev moment. I’m excited. 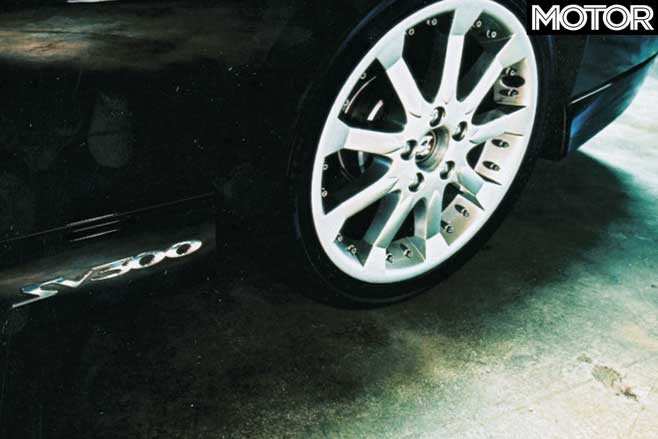 Bulmer reckoned I was just the bloke to frighten those ponies. Lucky me. Must be because I’m a devout petrolhead, with high distinctions in prior HSV ownership. I’d scoured Hawley’s low strafing run over the facts and figures of the SV300 in the November 2001 issue of MOTOR with a fair degree of eyebrow.

Never driven an HSV with more than 215kW before. Emotional deprivation, I know, but stay with me here. The kicker was, I had to come up from Melbourne to Sydney, where my 10 year-old boy Oliver lives with his Mum, to collect the SV300. Hey Oli, wanna do some high-speed father-son bonding this weekend?

So we’ve lobbed in the bowels of the MOTOR car park in Sydney city and spotted the black SV lurking under the pallid glow of fluorescent lights, like a prowling feline. It’s an HSV all right: nose-down-tail-up attitude, 18-inch nine-spokers, rear spoiler. Mercifully, there’s no upswept, sullen fat lip on the rear underside as on the Clubsport R8. 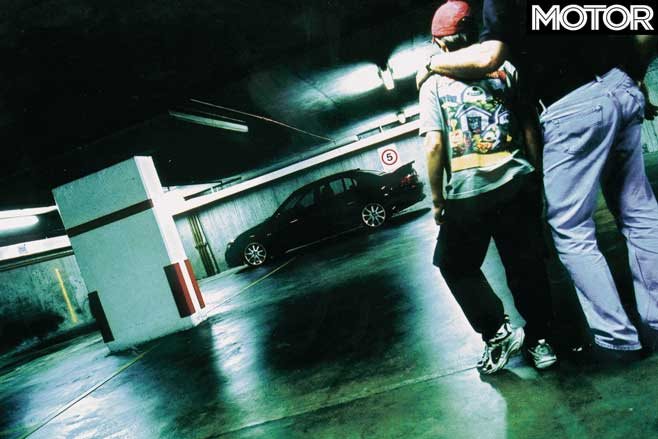 But on the front under-nose of the SV300 there’s a new grille in which you could rack a coupla dozen googies. No mistaking what we’re dealing with here, though: SV300 insignia are liberally confettied about the body. Inside, it’s branded on the seatbacks. too.

Considering this car takes the baton from the venerable GTS, “SV300” is hardly the most evocative nomenclature. HSV has withdrawn the GTS tag for an enforced hiatus and the smart money says it’ll surface real soon on the Monaro.

Back in the late ’80s I’d eschewed the Walkinshaw plastic porker for the original SV, the SV88. A 145kW slushbox I know, but I just loved the shape in that dark blue. Still do. This latest SV iteration is a different kettle of Atlantic salmon entirely. For a start, the entry price of $95k would buy you a trendy inner-city bedsit in any capital, bar Sinney and probably a penthouse in Hobart. Mind you, compared with the compact VL, this mutha’s just about big enough to strata title anyway. 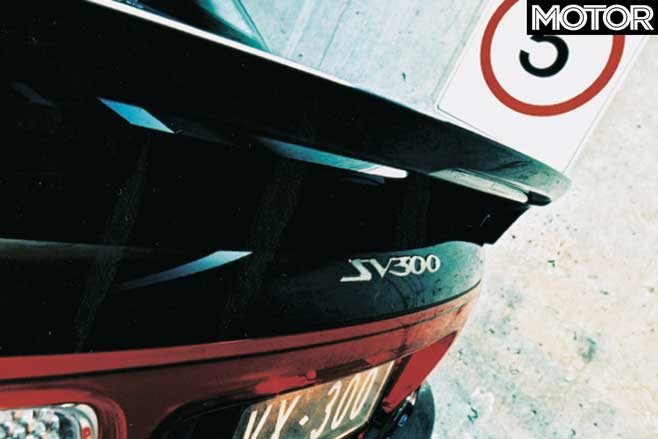 Slide in behind the wheel and the familiar HSV bucket grabs you like a catcher’s mitt grips a baseball. The dash, unexpectedly, is blue. What? Still no oil pressure gauge? And no clock? Never mind, both visors have a flip-up cover that reveals a vanity mirror with twin lights. Handy when checking your choppers for spinach fragments, or restyling your nostril hairs before a meeting.

Maybe you already know, but the 250km/h speedo is calibrated differently either side of the 100km/h mark at the top of the dial. The gradations are wider before, closer after. Obviously, above 100km/h you warp into the time-space continuum. 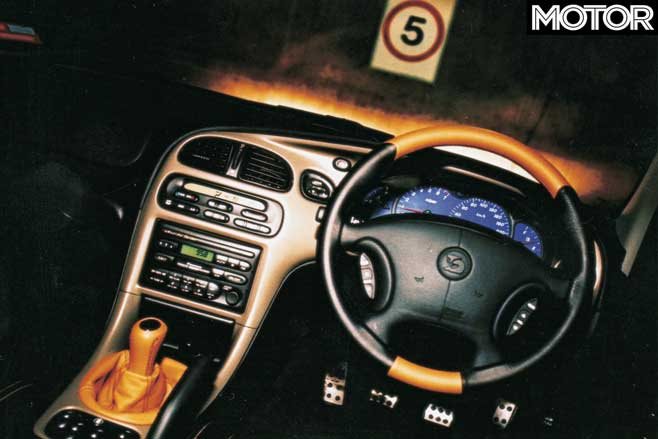 The first clue that you’re dealing with higher high-end grunt is on the tacho: the redline sits at 6500. Then, hellooo! There’s an anti-smoking button tucked down on the dash, behind the lower right of the steering wheel. Yep, traction control. Have to confess, I did switch it off just to see what would happen. But only once. What happens? Well, let me put it this way: it looked very impressive through the rear vision mirror. Blue fog, wafting languidly through the forest...

Speaking of the steering wheel, like the gear-selector bag and seat inserts, the top of it is highlighted in lurid gold leather. The effect is sort of like you’ve been stuffing your face with handfuls of Twisties and then driven with your Twistie-dusted mitts between 11 and one o’clock. 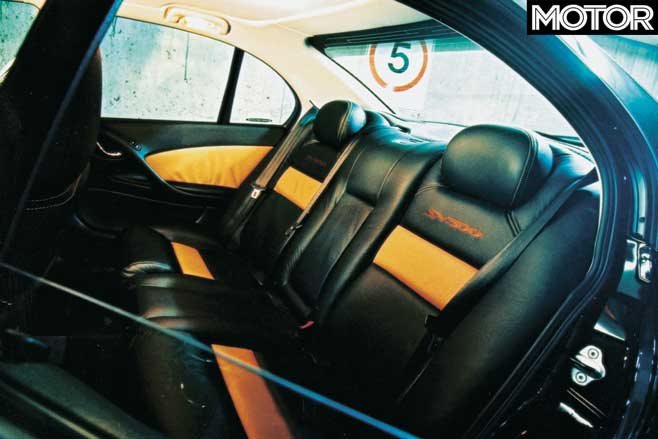 The black leather is also contrasted with Twistie-coloured seat stitching. Nothing that couldn’t be neutralised after a few hours diligent handiwork with a black texta, I’m sure. It’s not a look I like, but to be fair, most people who checked it out cooed admiringly. And you won’t wearout foot pedals in a hurry: all are covered in racy drilled stainless steel. Including the left footrest.

In the place where cup-holders usually go (immediately north of the console bin) a dinky little three-piece tool kit sits in recessed foam rubber under a lid. Oliver locked onto the novelty value of the finger-sized torch immediately. Hmmm, think I’d rather have the cup holders, thanks. No burred walnut on the dash, but you get a good ear-bruising from the 250W Eurovox (with clock) and ten stacker boot-mounted CD. No sunroof, though. 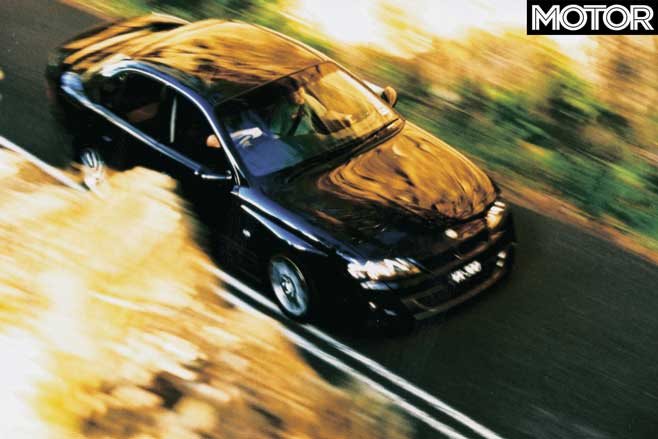 Design-wise, the under-bonnet layout is arguably more impressive than the dash. Start it up and there’s little clue that you’re unsettling so many horses. To me, the sounds were entirely familiar. In fact, all the sensory inputs seem exactly the same as my original VR GTS. The HSV gene pool is obviously wide, deep and enduring.

So we first-geared it up a couple of layers of car park and emerged in the city on a perfect Saturday morning. We were heading for the Blue Mountains and the great driving roads around Oberon, but it was teeth-grinding stop/start all the way out Parramatta Road to the M4. 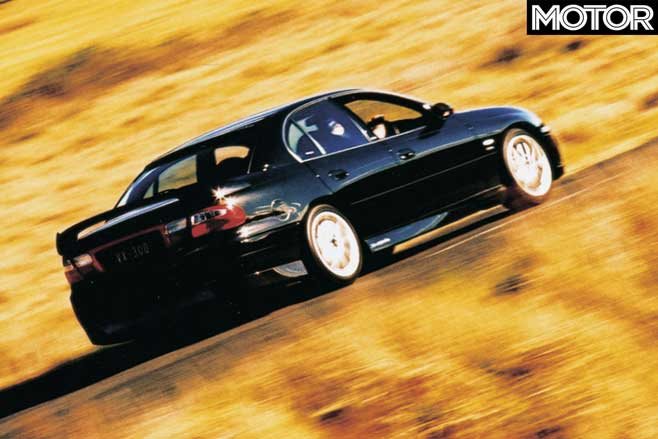 It wasn’t until the M4 toll gates that I got my first chance to ask the big question. I flung $2.20 at the bin, grabbed first gear, summoned up about 3500 on the tacho and dropped the clutch. The SV300 hunkered down and arrowed forward with a very satisfying V8 thrumming right through the business end of the power band. Hit the redline and a little red dash light admonishes you to change gear. Snatch smend and, as the HSV ad campaign suggests, that V8 symphony delivers another aggressive serenade. 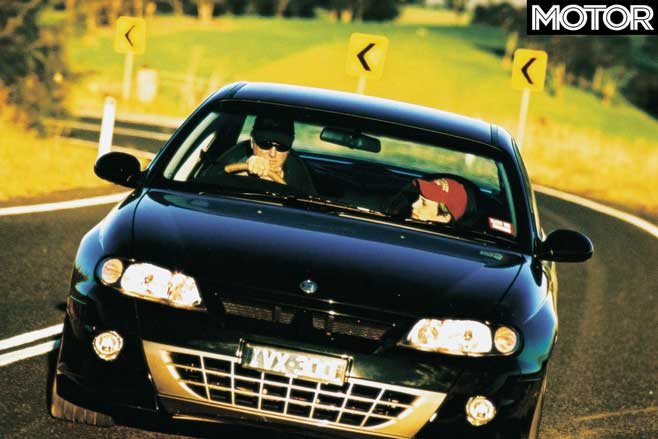 This car seizes the horizon and in film parlance crash-zooms it in your screen. In order not to embed the SV’s egg crate nose into the droopy tail of a waddling Falc, I had to back off. Oliver and I exchanged sly smiles, both awash with that warm inner glow that comes only with rapid forward motion. But the thing about the SV300 is that it’s not harsh or brutal. It delivers your immediate future so smoothly and seductively that it’s hard to believe you’re commanding so much power. And the higher, fatter torque band gives more flexibility in every gear.

Gotta say, spring in the Blue Mountains is a delight. Everything’s blooming and the air is as refreshing as a mouthful of chilled Krug. We left the highway and attacked the winding roads with their bends and switchbacks.

Here’s where the SV300 can’t disguise its bulk and sheer weight. In tight bumpy bits. I felt the Traction Control pulsing through the throttle pedal. And although the suspension and tyre package does a remarkable job of tying the car to the road, a bit of flip-flop creeps in beyond eight-tenths. But the self-preservation instinct kicks in long before the seat of the pants signals any threat to your wellbeing. 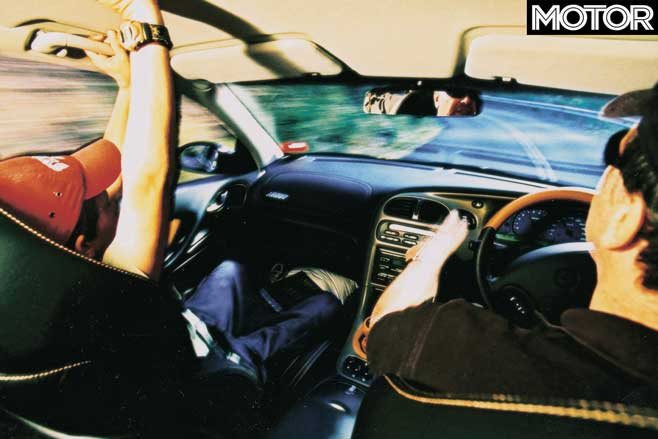 Everything’s relative though, isn’t it? At the limit, the SV would leave a base Commode bobbing in its wake. On the other hand, this HSV is no M3. Suffice to say that I managed to exert enough lateral forces in it to nauseate my son in less than five minutes.

And the weekend went nearly as fast as the petrol in the tank. The trip computer never signalled less than 19L/100 km. But like all the other costs this is simply a commitment you make when you elect to be moved in HSV style. The fact more and more driving enthusiasts are making that commitment and supporting this unique Australian product is a credit to HSV’s consistently high standards.

May I please have another naughty weekend when the next GTS appears, Geditor? 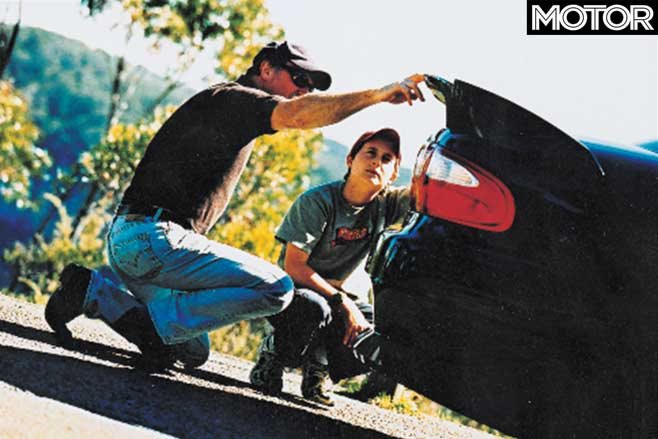 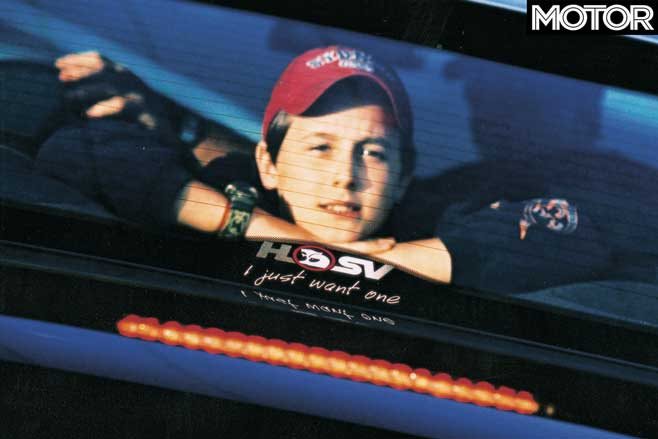 Julian: "We go back a long way. When I first scribed for GM’s Ad Agency, I lucked into a ’SV6’, the pre- Brocky HDT race-prepared winner of the Commodore Race of Champions in ’81. A comfortable rocket I kept the VC for seven years. Then came the SV88 - a cool cruiser that rode like a buckboard but handled well considering its now archaic suspension. The VR GTS with 5.7-litres got me back willingly to a manual. Finally, ummm - I'm the bloke you can blame for Skaife proclaiming himself a control freak. I directed those TV commercials."

Oliver: At two, Oliver already showed a healthy disdain for Volvo drivers. While stuck behind one dithering in a multi-level car park, I sighed with exasperation, which prompted the imperious command from the back seat: ”Come on, dickhead!” Oli travelled in HSV style from birth: he had a baby capsule in the SV88. In the GTS, he had a booster and rode in the front bucket. Once. at age five, he asked me earnestly: “Dad, when you die, can I have the GTS?“ 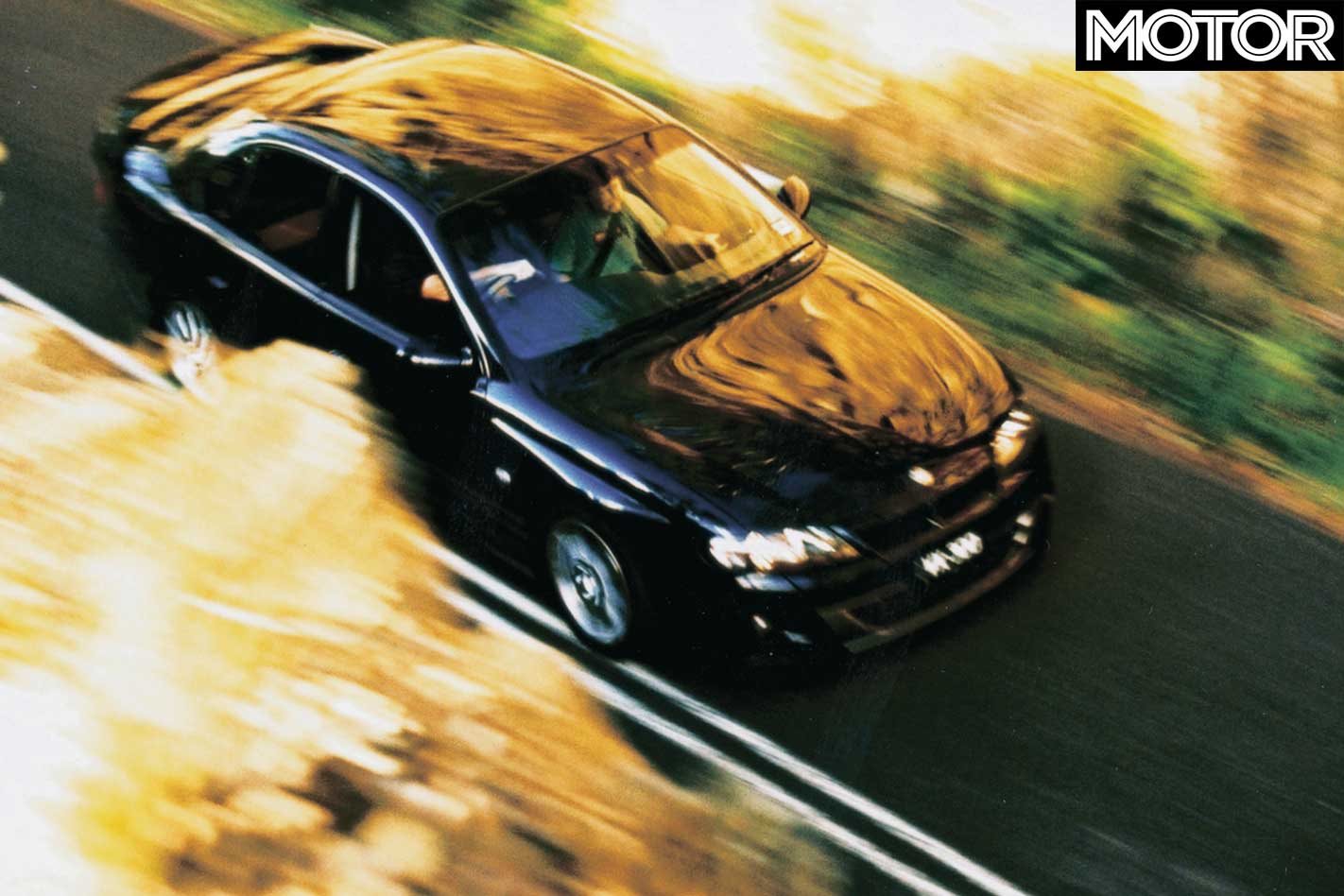 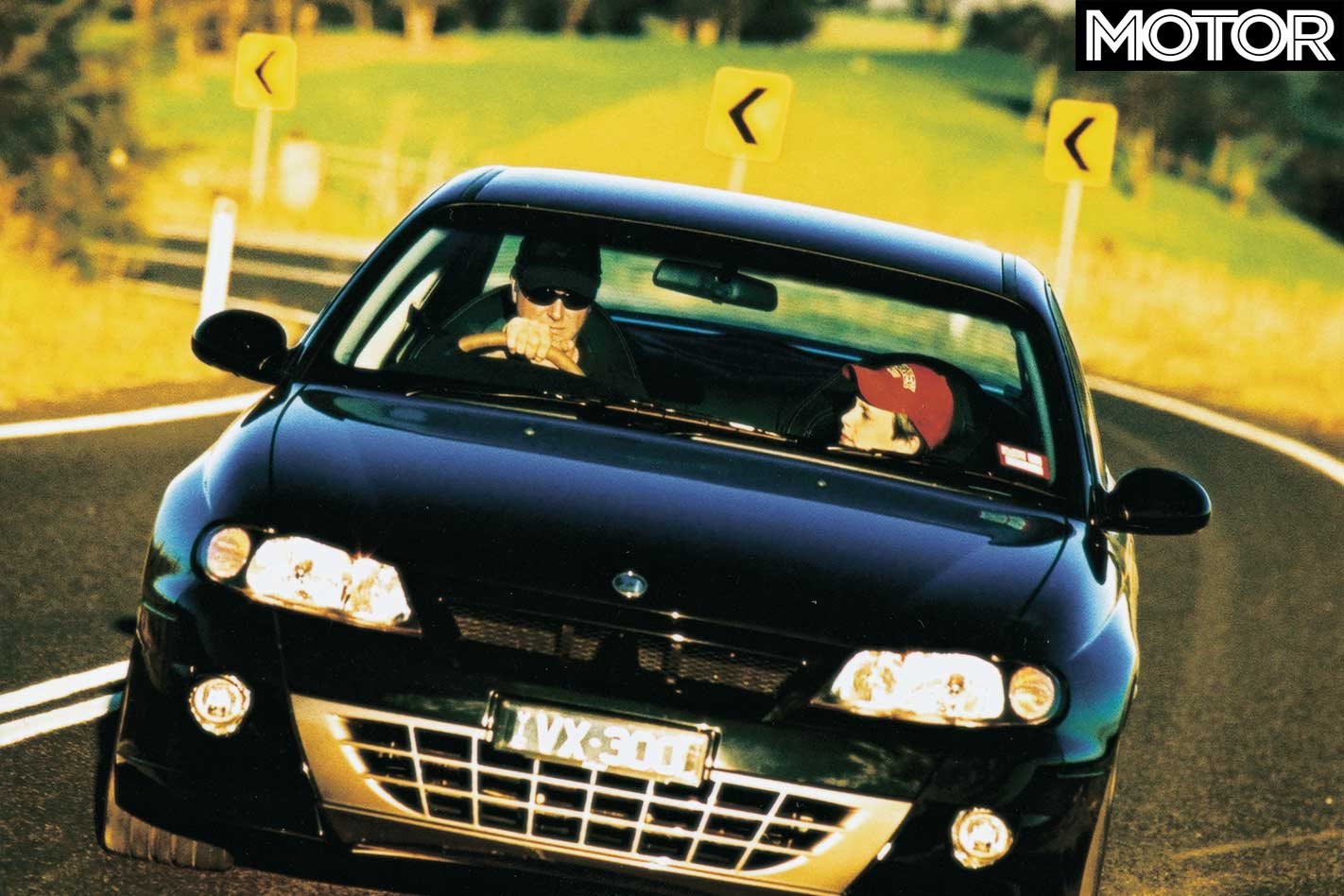 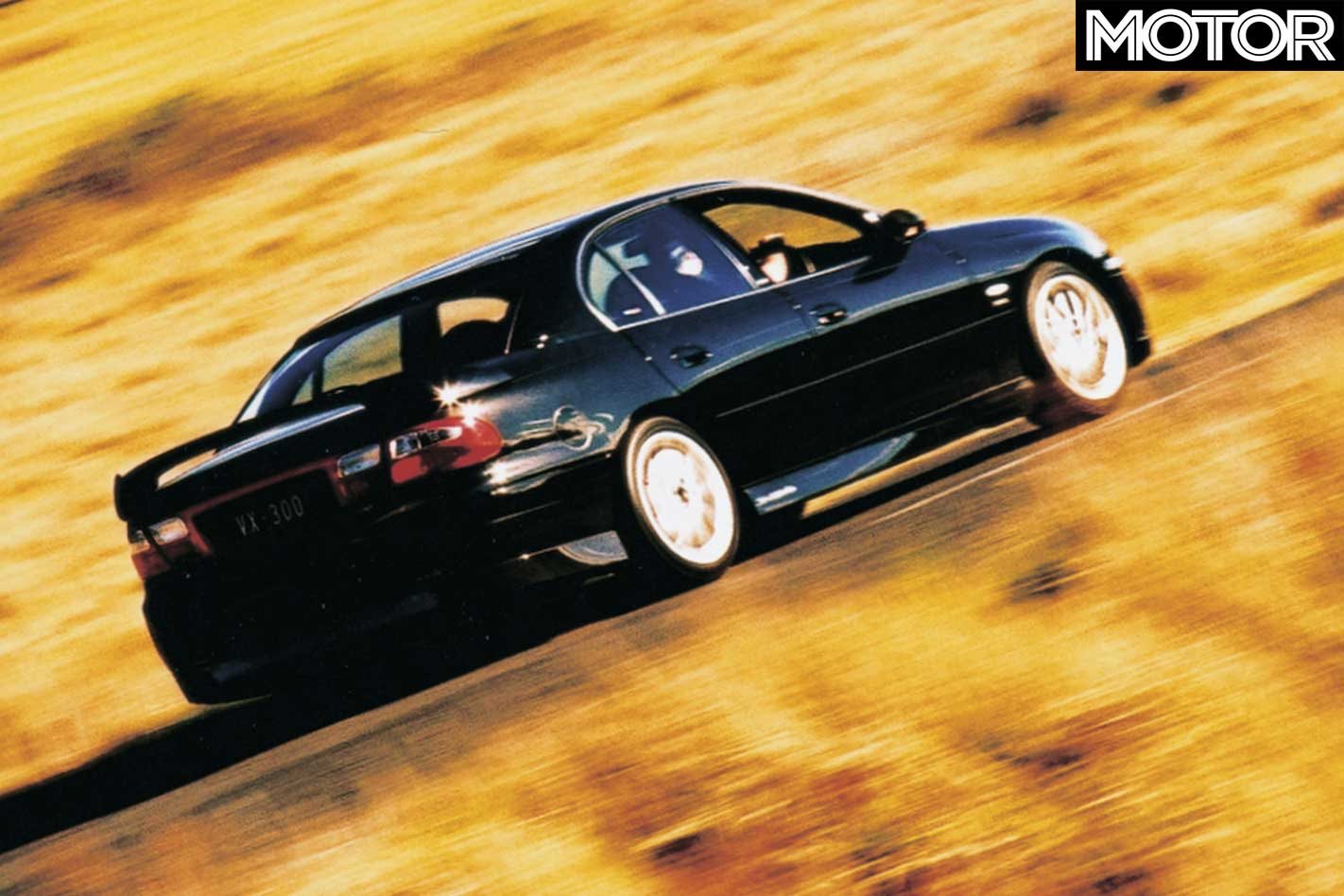 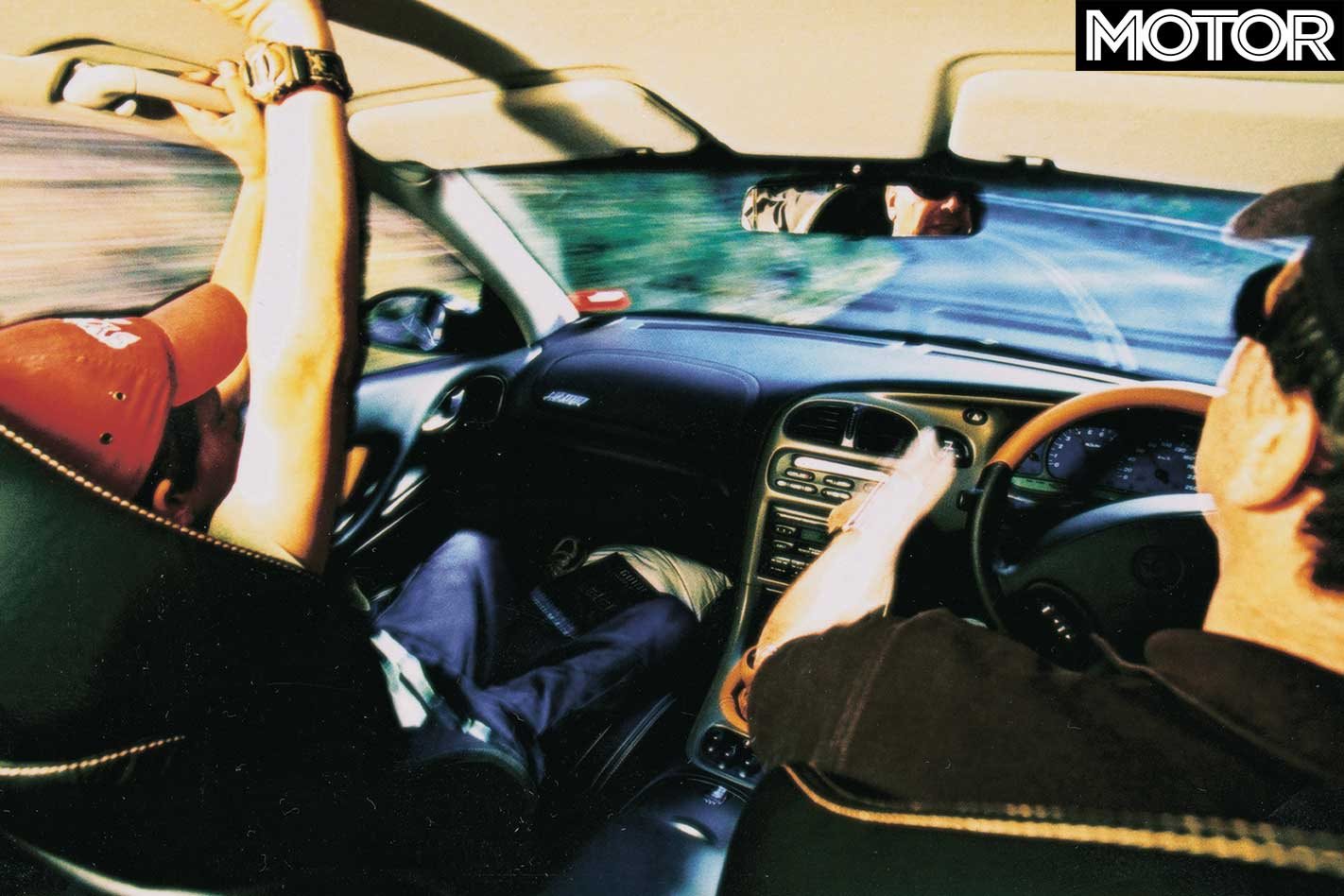 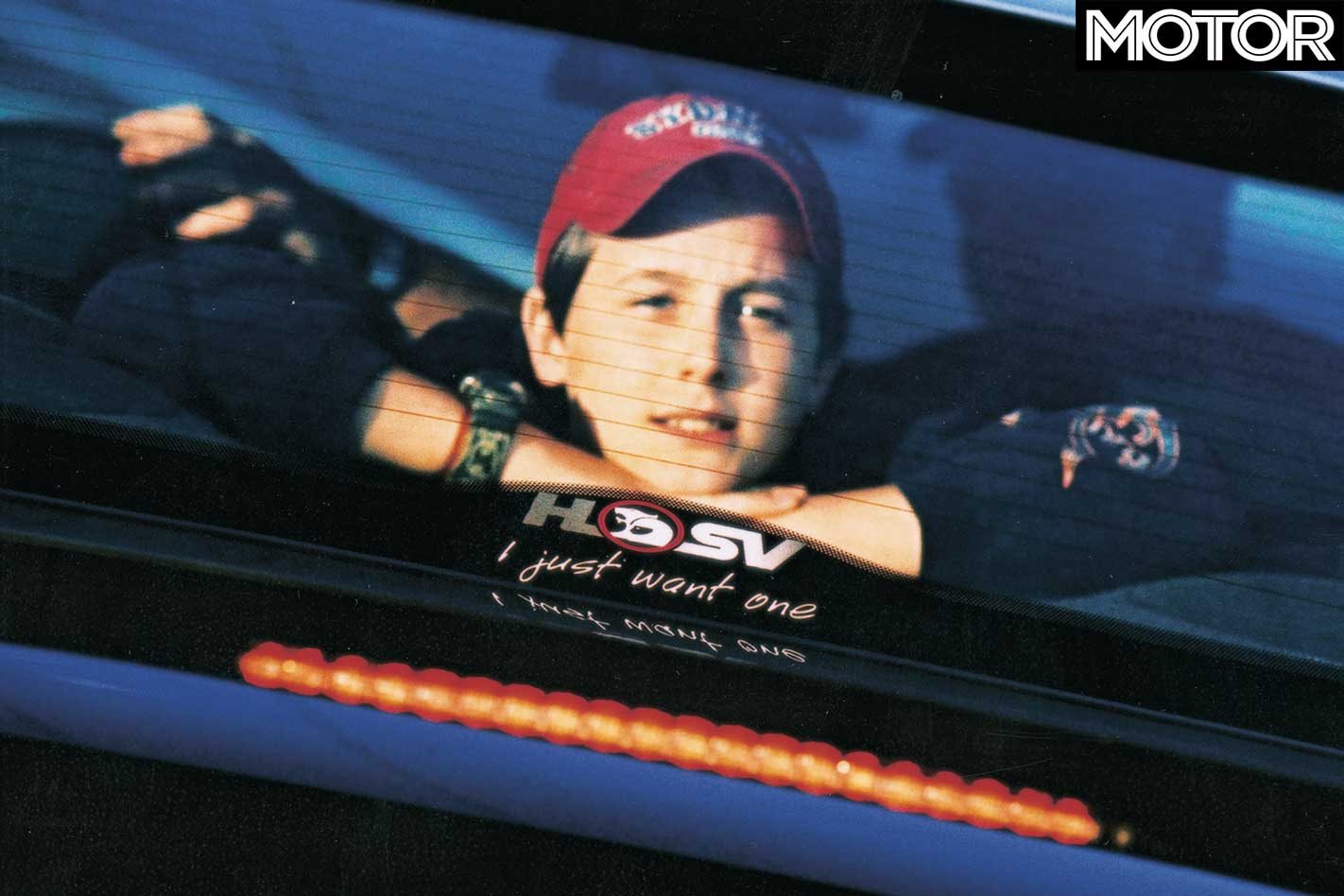 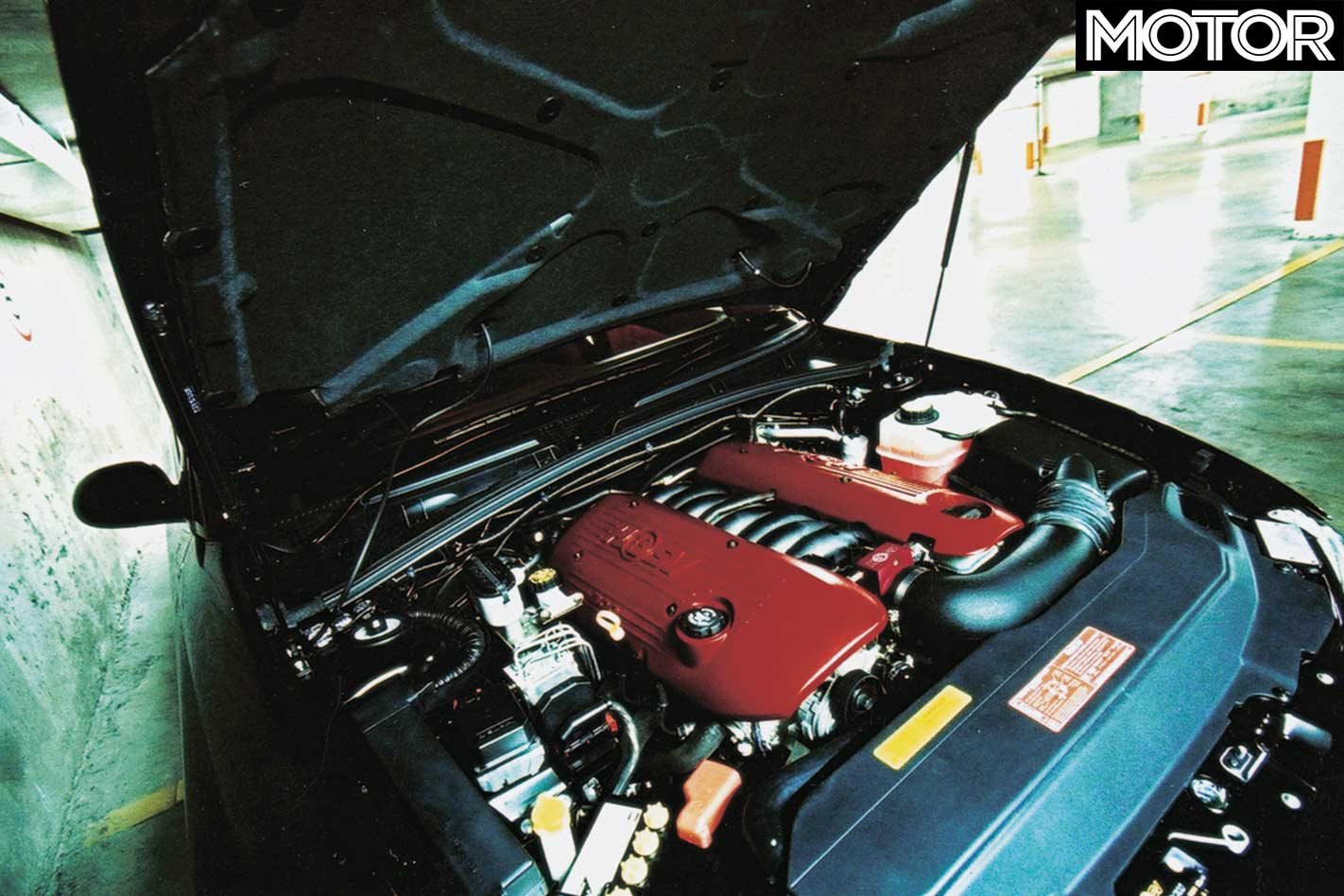 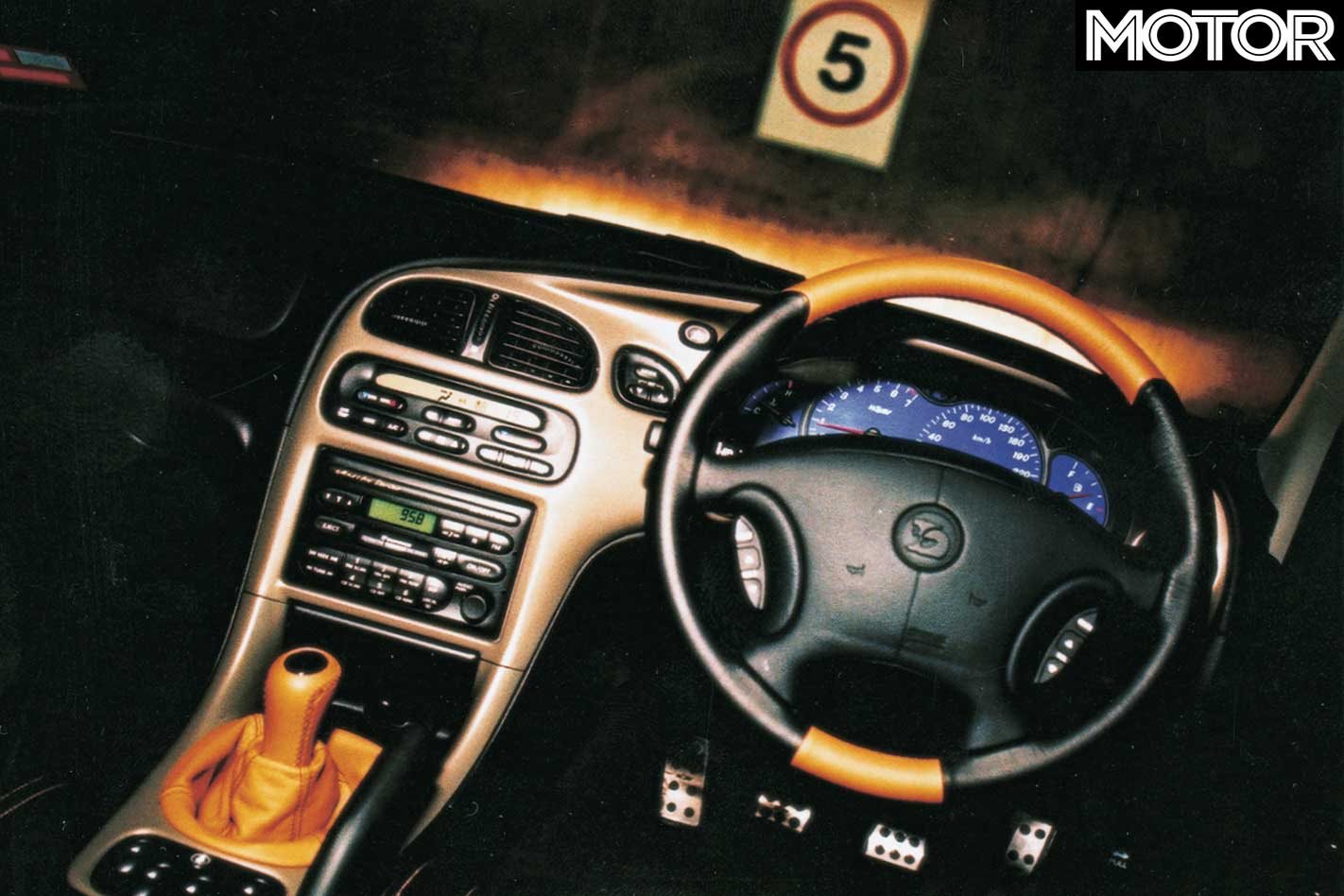 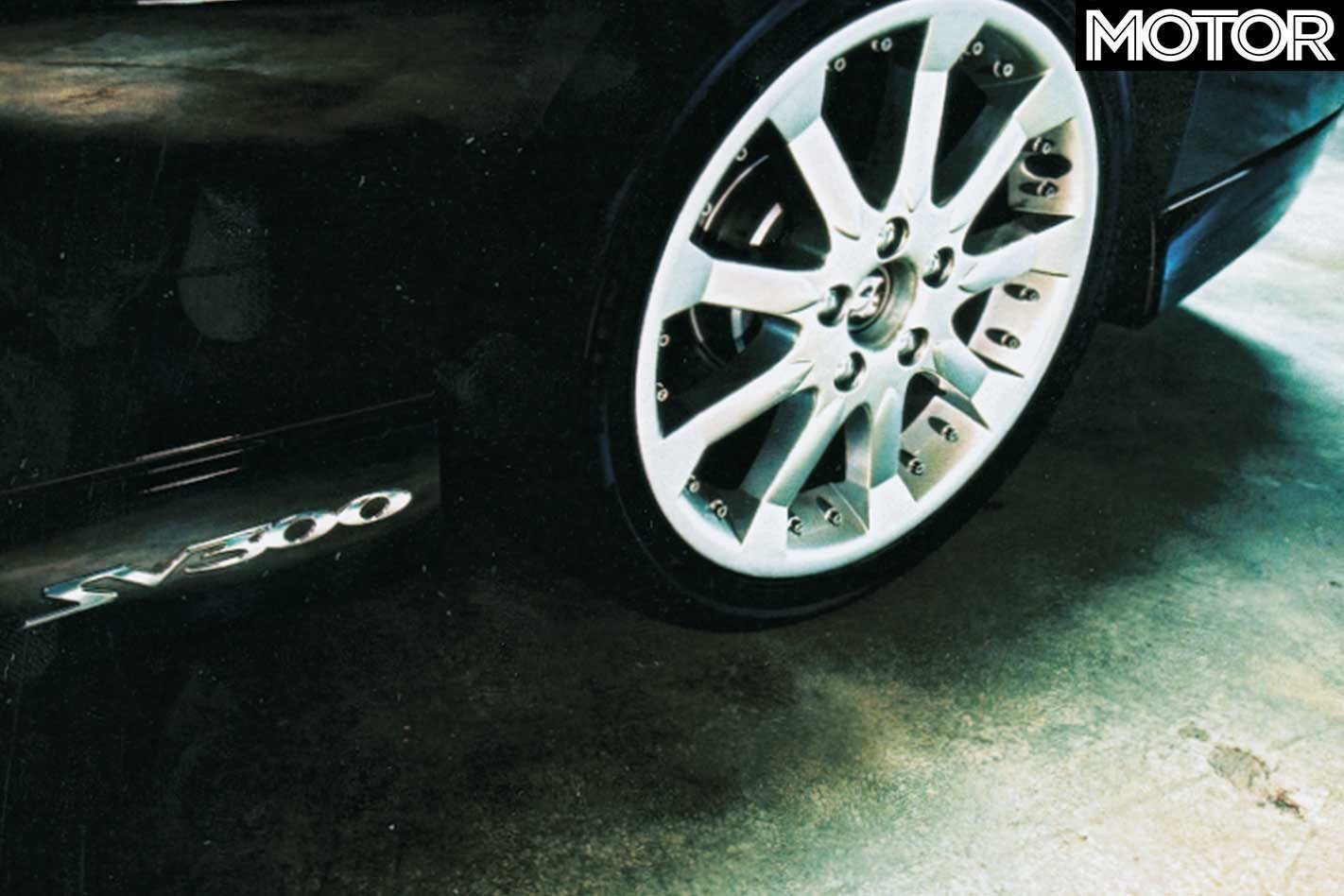 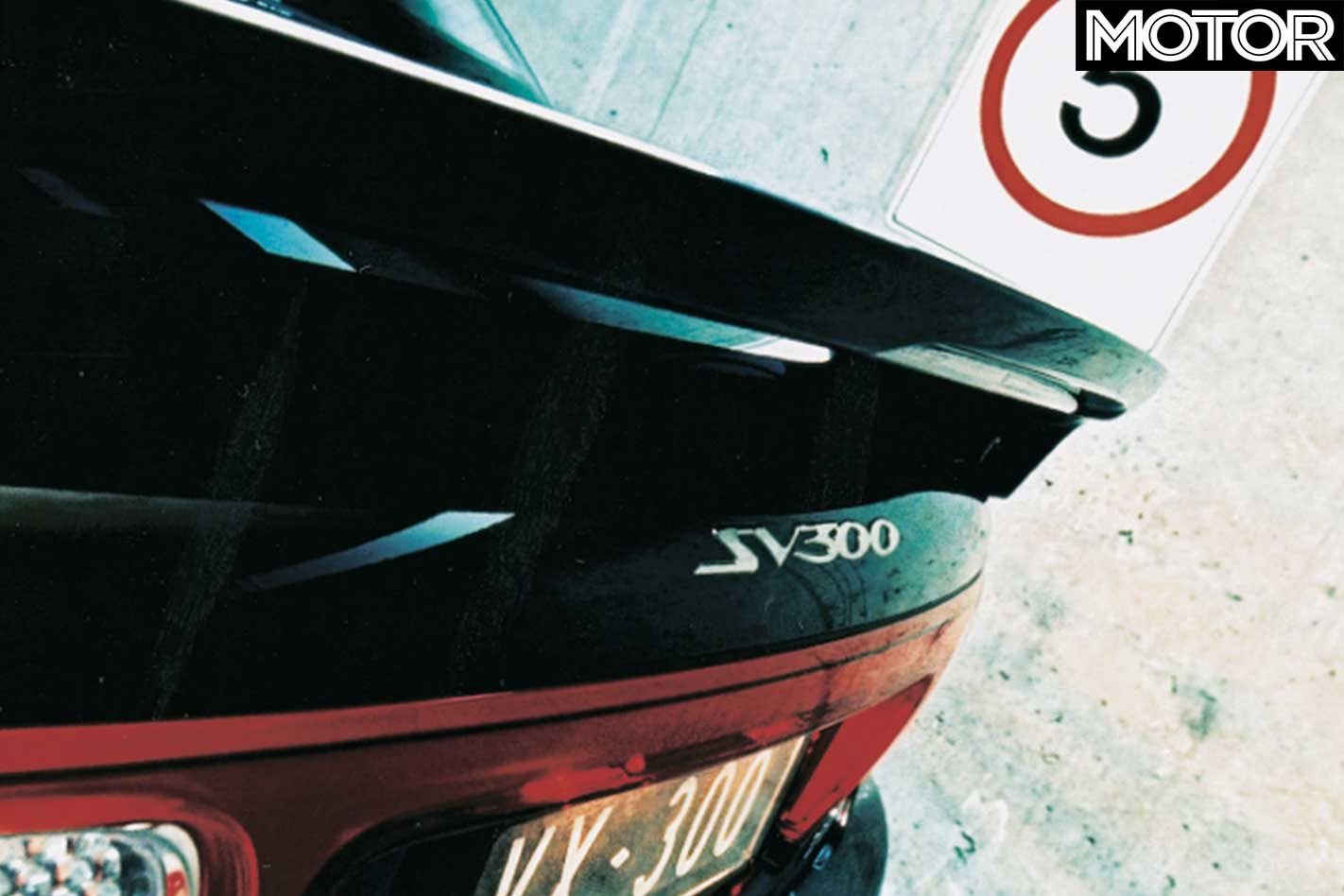