If an HSV VL Walkinshaw and a Nissan GT-R had an 869hp love child, this is what it'd look like

THERE’S no doubt the VL is one of the more fondly remembered early Commodores. The V8 reached ‘peak bodykit’ under Tom Walkinshaw, while Holden’s smooth Powertech 6Ei, aka the Nissan RB30, more than ably powered the regular variants. 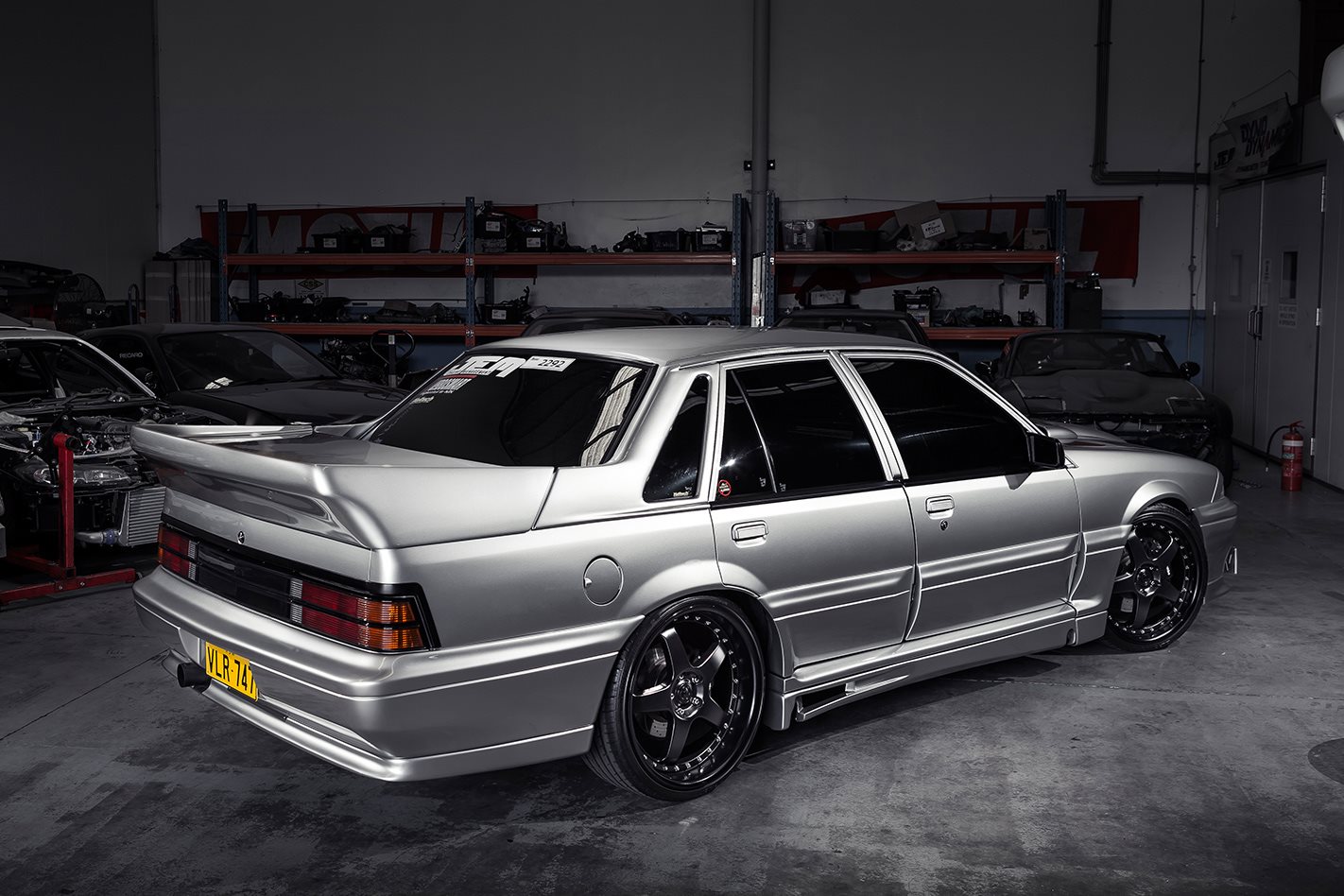 To the untrained eye, it may look like a regular Walky, especially in that colour. But a closer inspection reveals it to be bathed in a very different hue to the original's Panorama Silver

But without proper set-up, they’d do single-peggers for miles just trying to boot it out of your mum’s driveway on a rainy day, while at the racetrack they were viciously marauded by Nissan’s mighty Godzilla – the R32 Skyline GT-R.

Huss Ghamrawi grew up amongst all this; he knows the score. So when, as a professional panel beater, he officially diagnosed a rusty R33 Skyline GT-R as bin material, he also saw opportunity. “The job was too far gone; the guy wanted to track it, but he was going to die in it!” Huss laughs. 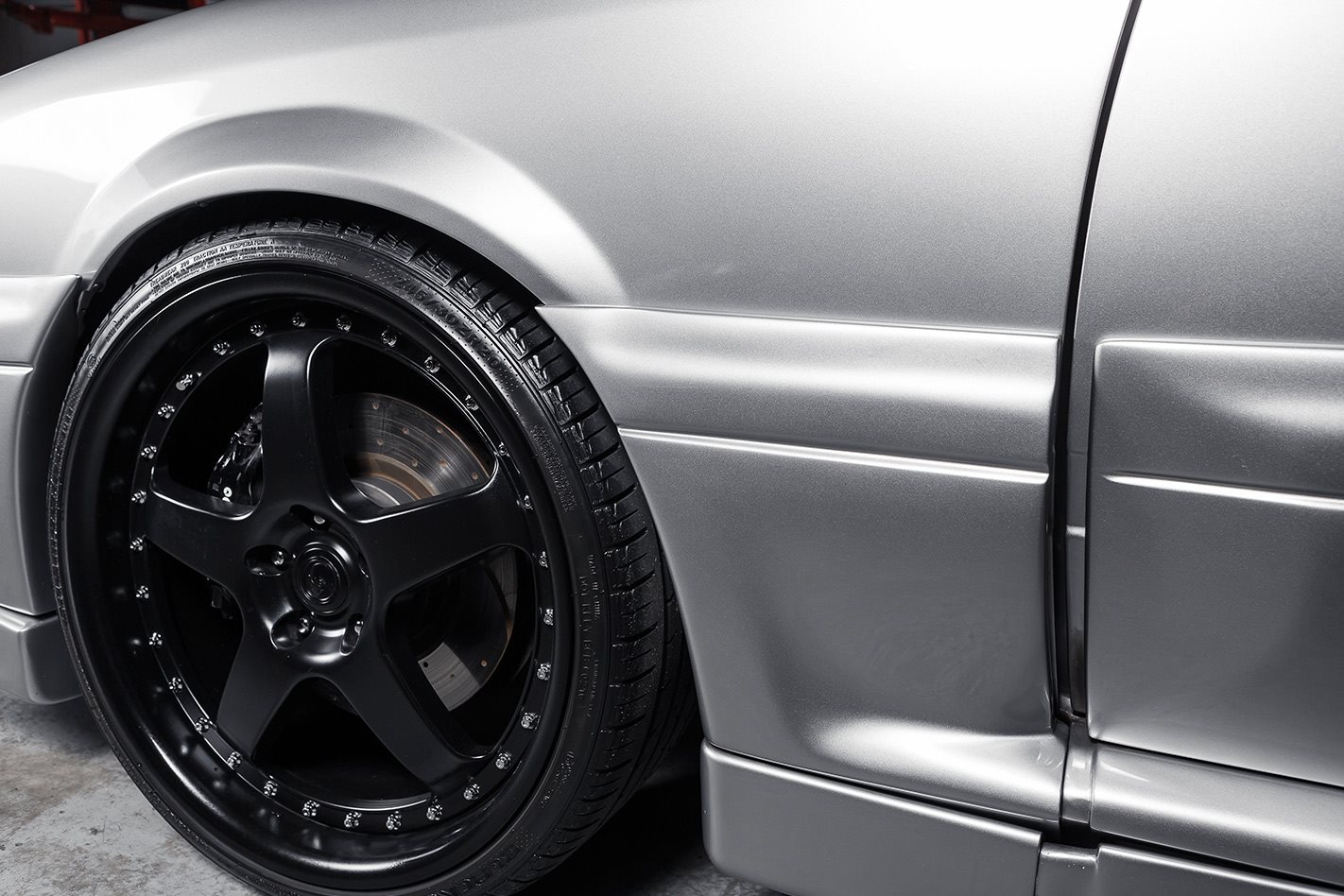 Being a northern Japanese car, the sills, quarters and pillars were all air. “My brother Hamza was going to scrap the shell, but I remembered my old VL Turbo that had half a Walky kit and an RB25 in it. Then I just got thinking,” Huss explains, tapping his temple. “I rang around for a cheap VL Commodore and scored this one for $150. It cost me more to tow it home!” 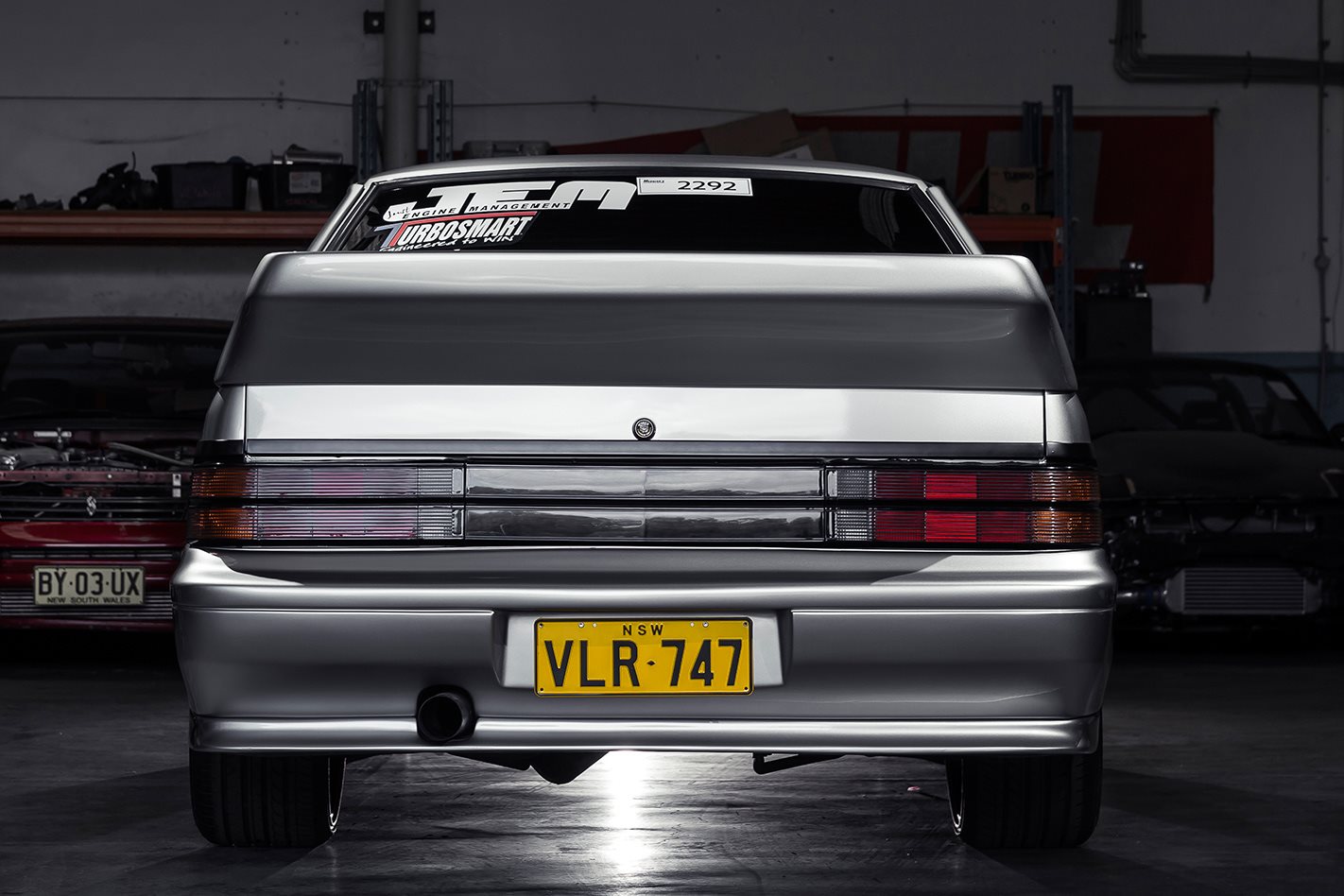 Huss took both vehicles to his mate’s workshop and cut the body off each until he had a bare R33 GT-R chassis and a gutted VL Commodore body. “I put the VL body on a hoist and lowered it over the Skyline chassis; I would measure, cut, weld. Then I would do it all over again,” he says nonchalantly. “The process took 20 or 30 goes before it all cut right. No jigs – just a plasma cutter, a grinder, a welder, a tape measure and a piece of angle to bend stuff with. 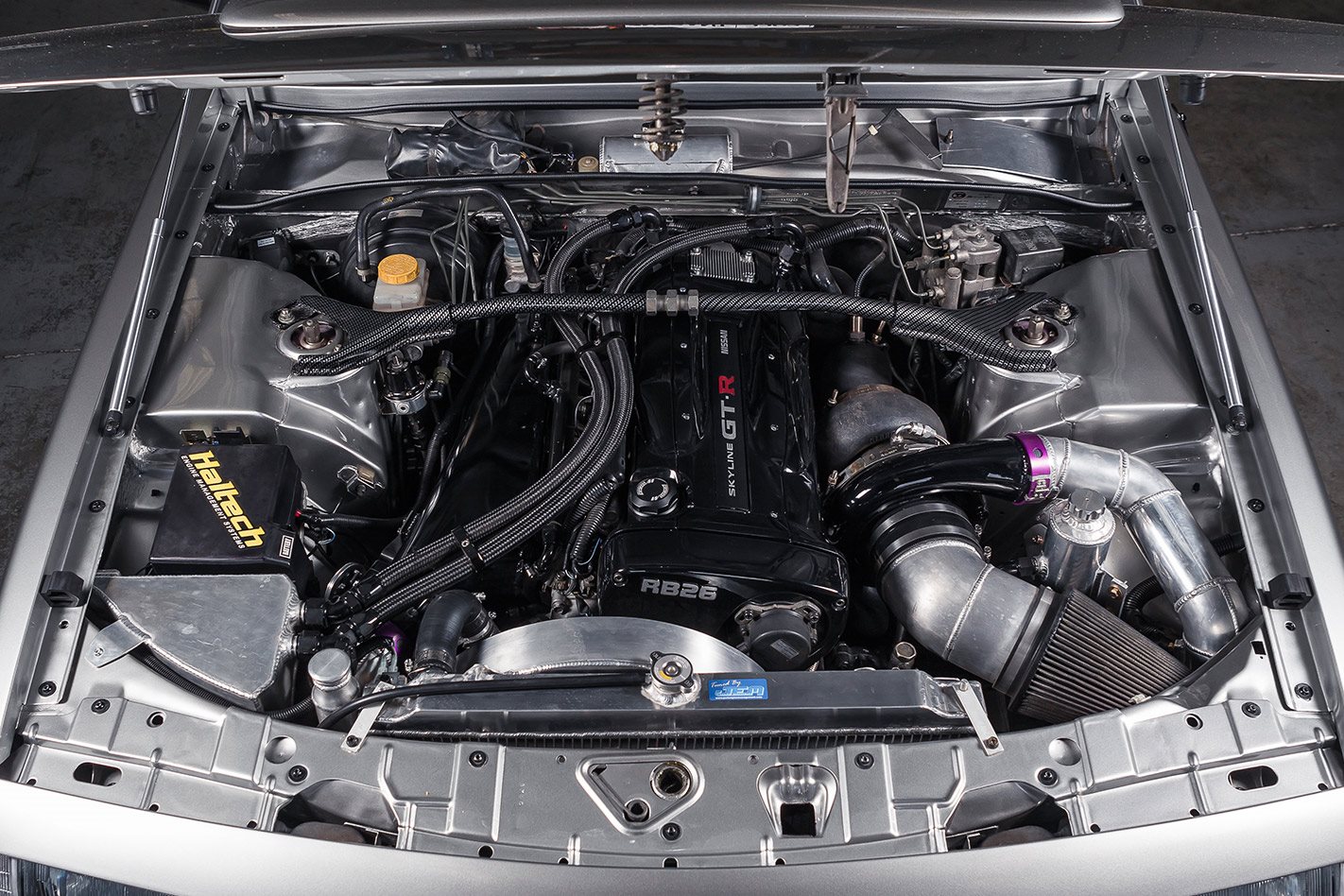 This engine bay is all business, although you’ll notice it’s also kinda weird, with R33 Skyline shock towers and a hybrid Holden/Nissan firewall. For those chucking a sad about the lack of Holden power, just remember this built RB26 was running to 7000rpm on a run-in tune with 23psi of boost. It now copes with 40lb and can rev to 9700rpm all day

“I’d never done anything like this before,” he admits, “but I had this gut feeling that it was going to work.”

I admire his confidence, but what would he have done if it all went south? “What’s the worst that could happen? I’d just chuck it all in the garbage!” 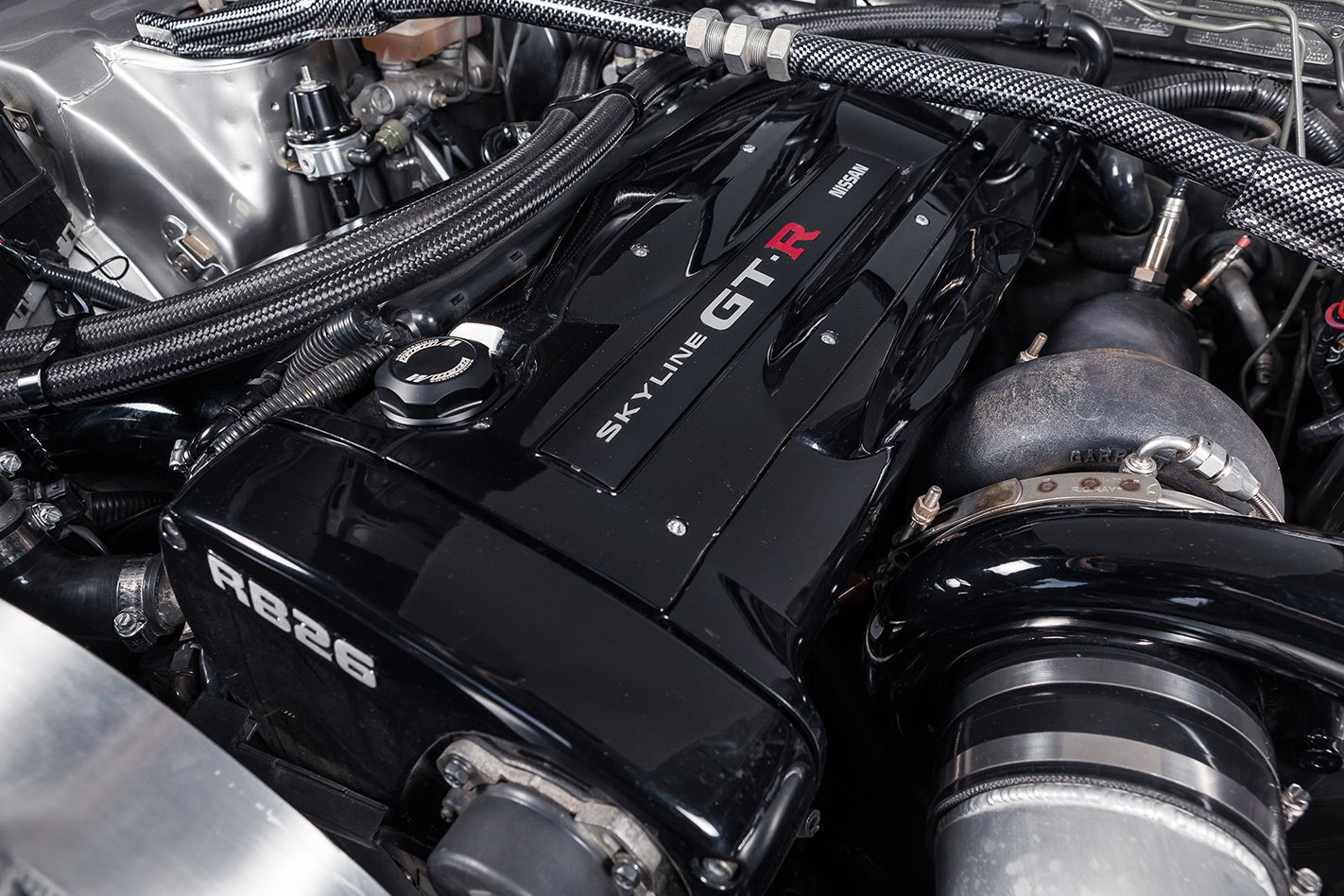 Fortunately no chucking was necessary, but although many areas lined up pretty close, the conversion was far from straightforward. Aside from some tricky filler panels, the biggest change was the wheelbase, which is about 50mm longer than that of a stock VL Commodore, but not where you’d think.

“I had to move the front wheelarch forward to bring it in line with the Skyline running gear,” Huss says. “I had to lengthen the side garnish and trim the front bar and spoiler to suit.” You wouldn’t know it, but Huss certainly remembered that when his bespoke Walkinshaw-style front lip downforced its way off at Cootamundra Drag Battle at over 200km/h; it went under his wheels and got spat out the back! 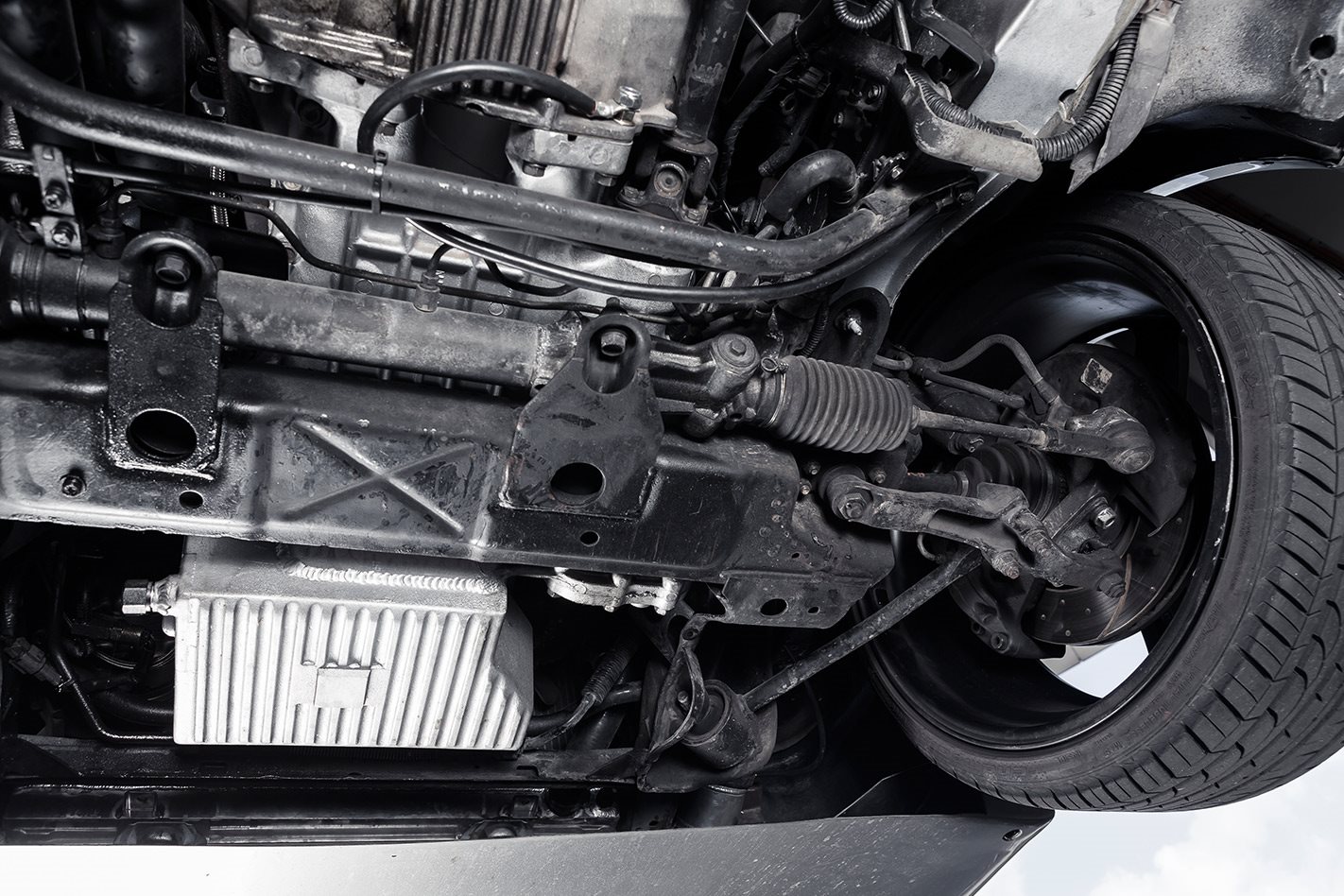 The floorpan and chassis rails may look foreign to those familiar with the VL Commodore, but this conversion looks like it’s meant to be there

Amazingly, the bulk of the complex stuff in this build took only four weeks, with the car going in for a bodywork freshen-up after that. “Being a VL it had rust in the usual places – around the screen, plenum, that sort of stuff.” Huss also fixed up the Skyline shock towers, the only badly affected piece of Nissan he had to use. “It took me three weeks to get the rust out and the body as straight as possible,” he says. 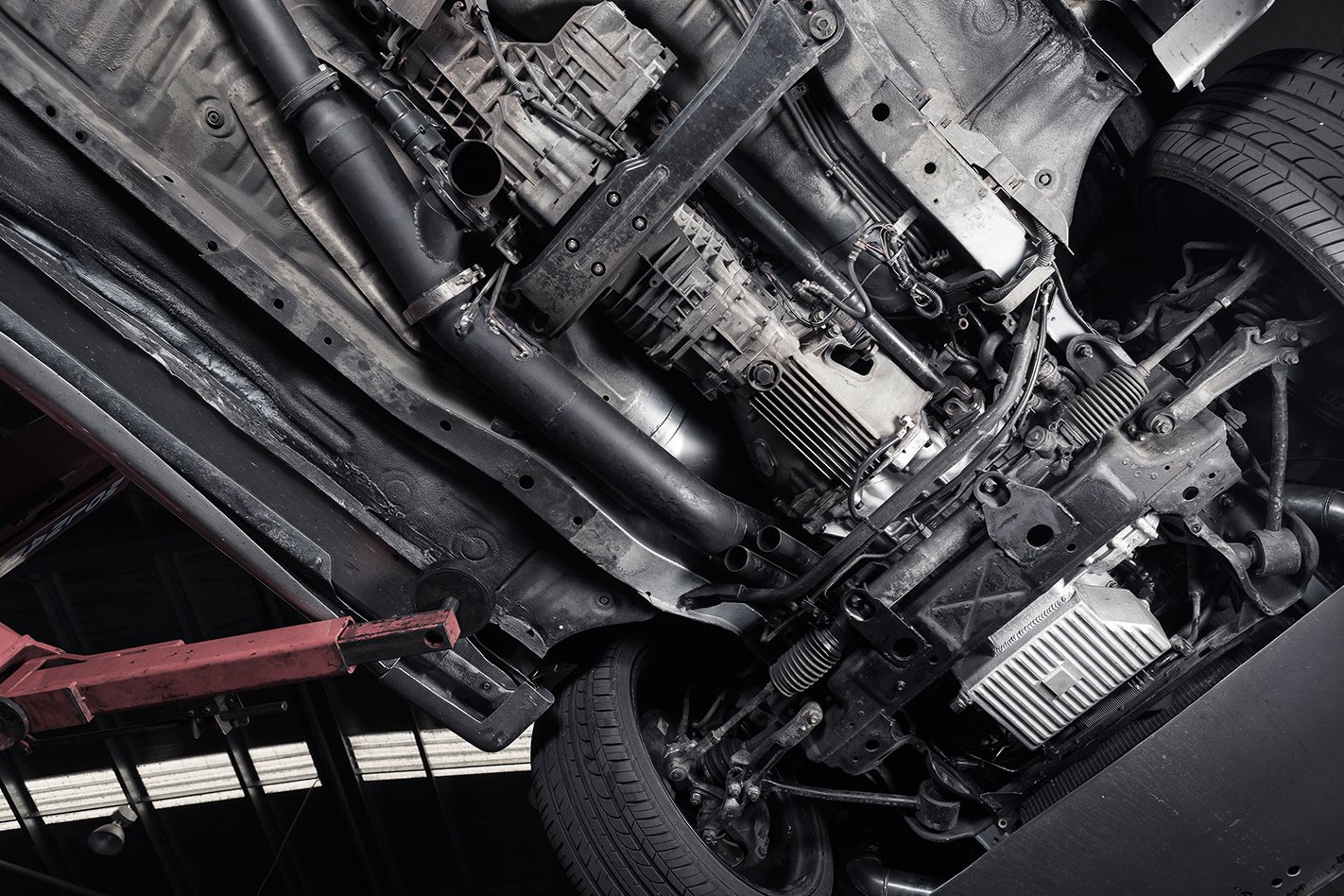 Not only does the Skyline floor allow for the complete AWD running gear to be installed without modification, it tidies up some of the VL’s unloved attributes such as the low-hanging spare wheel well and exposed fuel tank

It’s at this point I ask Huss if he was working on the VL full-time. “Nope; just after work, all weekend. Over the Christmas break, too.” He shakes his head. “You know when you’re just excited about something? I would have done the whole thing in five months if I didn’t have to wait for an engine and some other stuff!” 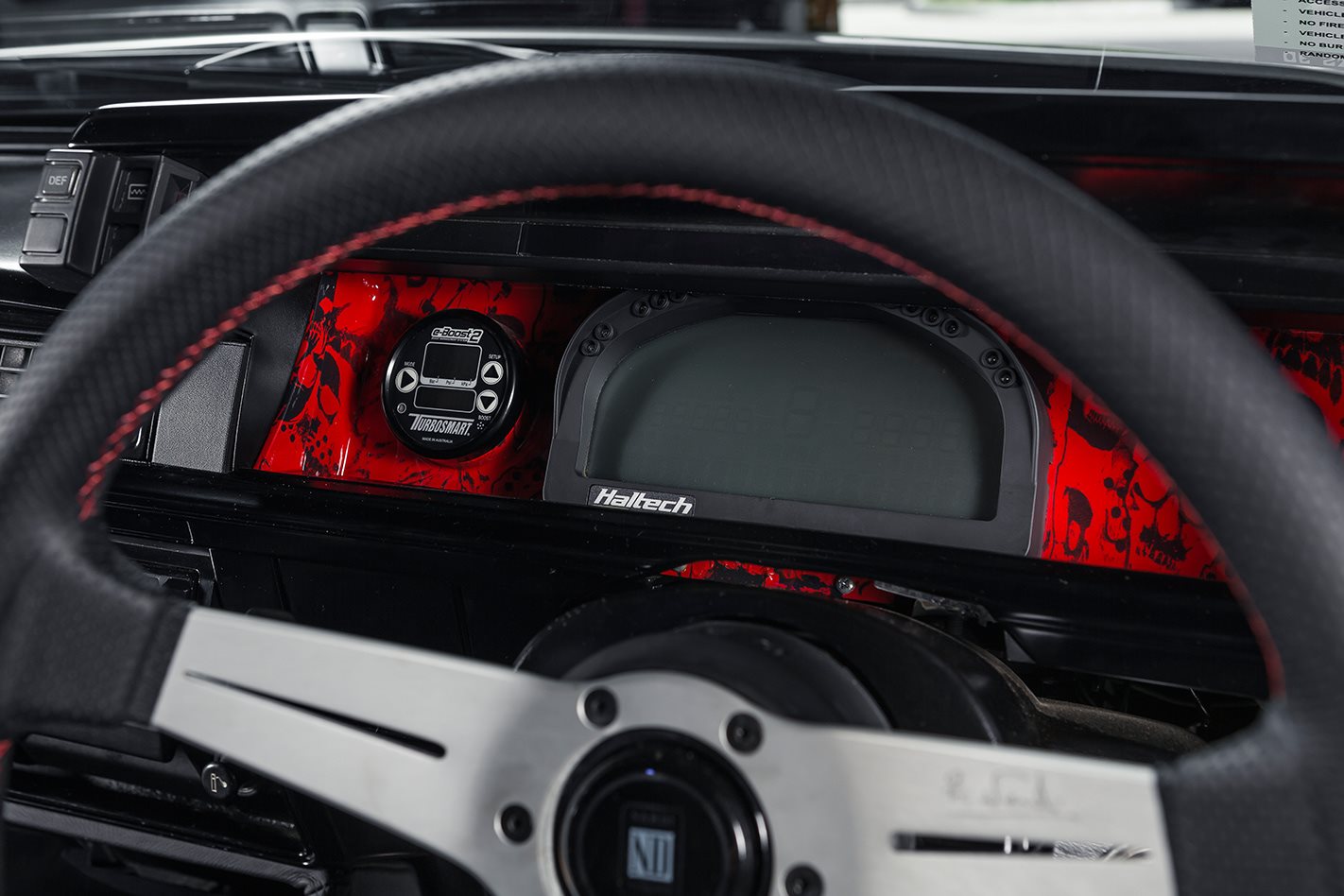 The analogue VL gauges weren't going to play nice with the Nissan running gear, so Huss binned it all in favour of an integrated Haltech read-out installed in a hydro-dipped binnacle

Although it took some time, Huss’s brother Hamza knows how to screw together a stout RB motor. He took an RB26 block and built it up with reciprocating bits by Nitto, a Hypertune intake manifold, GTX42 turbo and a bunch of Turbo-1 gear handling the waste. 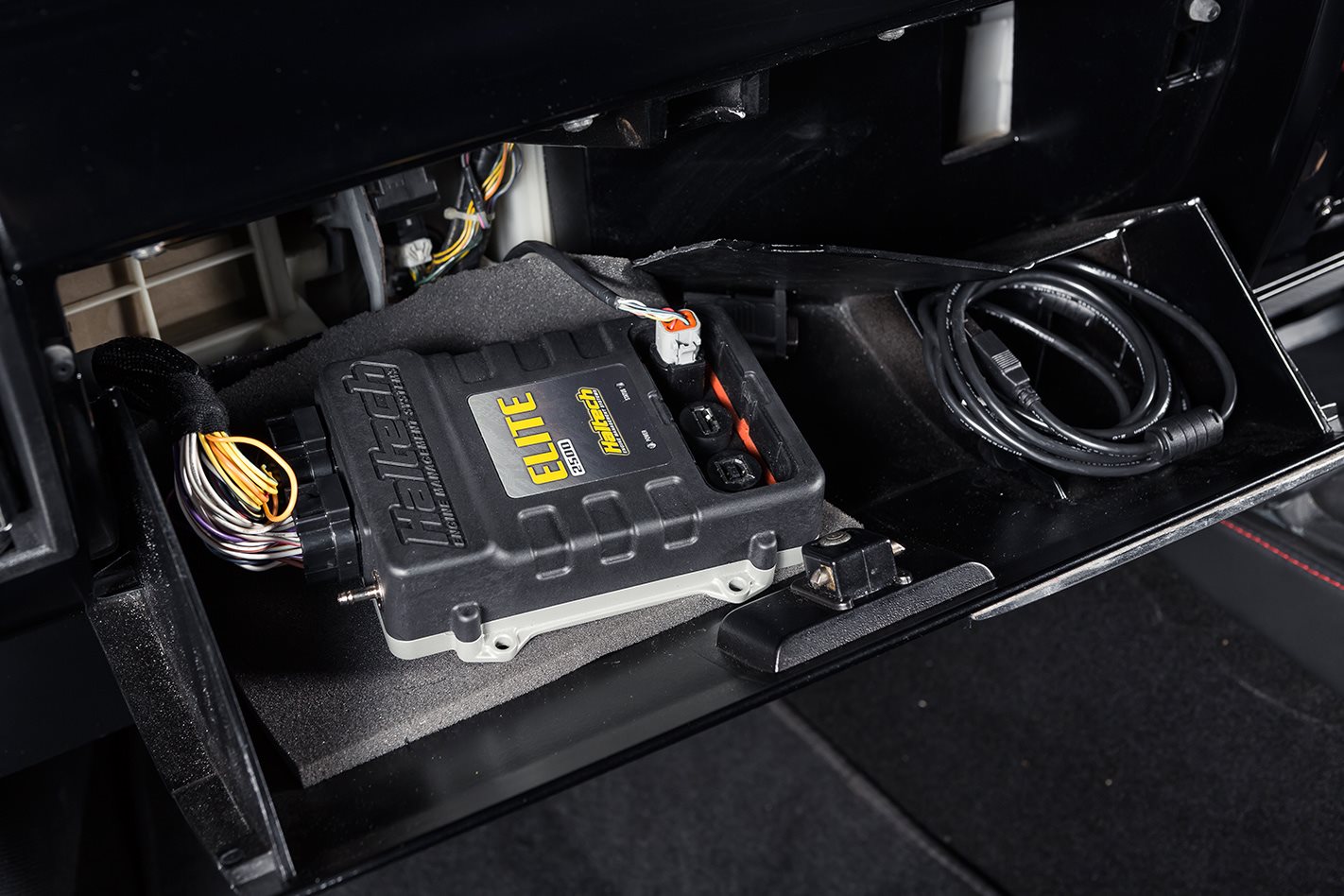 Some say there’s no replacement for displacement, but this Nissan six will blow that old adage out of the water; with the RB now run in, Huss will rev this beast to 9700rpm all day, smashing through 40lb of boost. Strapping it down to an all-paw dyno, VLR747 has recorded 869hp at all four wheels; it should do more, but the turbo is maxed out! 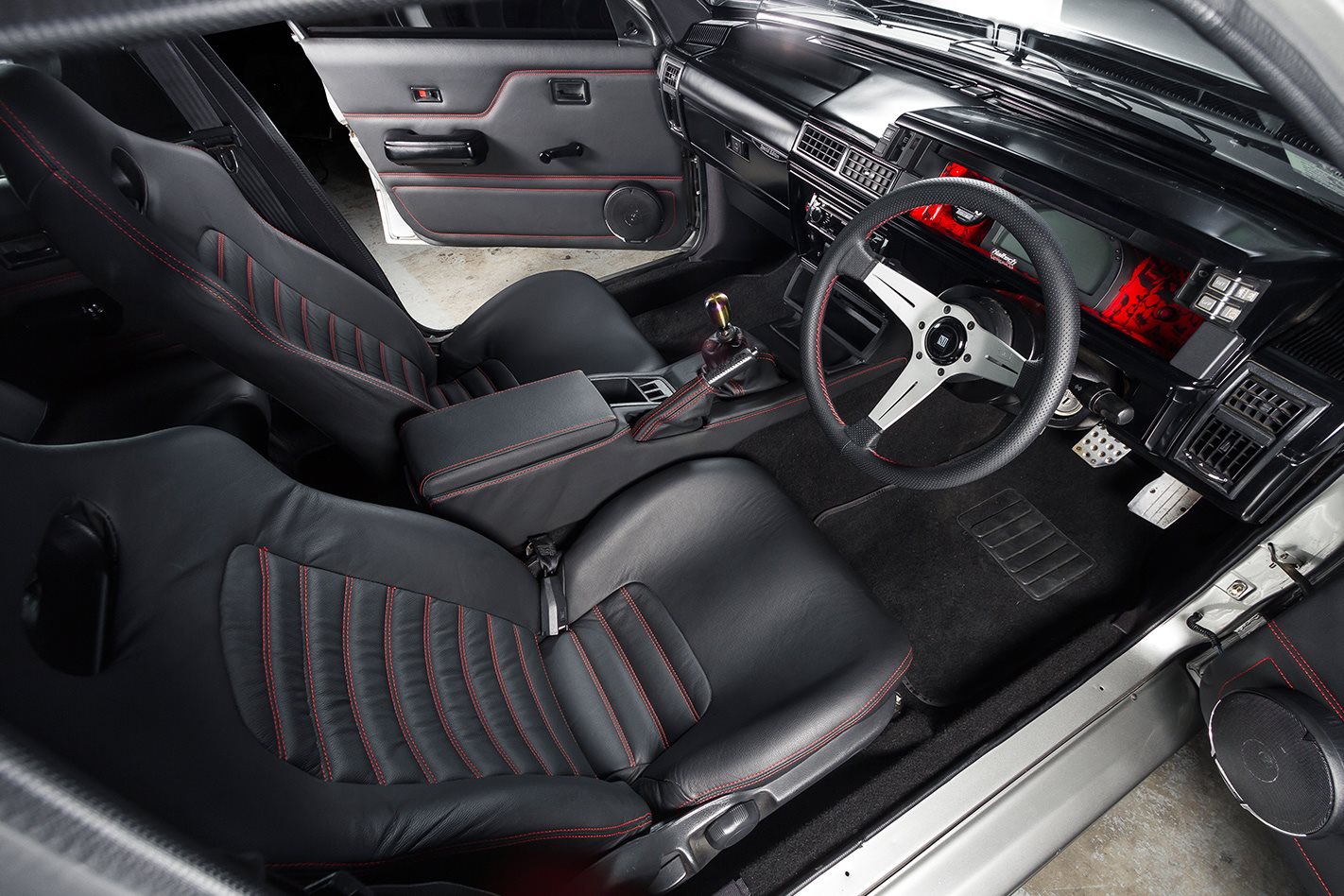 When you're running a Skyline floor, trick Skyline seats bolt straight in! These are from an R32, while the rear bench is a mixture of Holden and Nissan gear, all re-trimmed by old mate Tommy

Listening to Huss’s RB26-powered VL Commodore start for the first time, you know something’s amiss. Following the whir of the twin Bosch 044 fuel pumps, it stutters and carries on like a race motor, until Huss gives it a kick in the guts and it revs to life. It’s throaty; it’s clearly no V8, yet it doesn’t make a noise like any Holden six before it. “At a street meet at Eastern Creek, they could hear it from the grandstands! The commentators came over, microphone in hand, looking for an explanation! People just freak out!” Huss laughs. 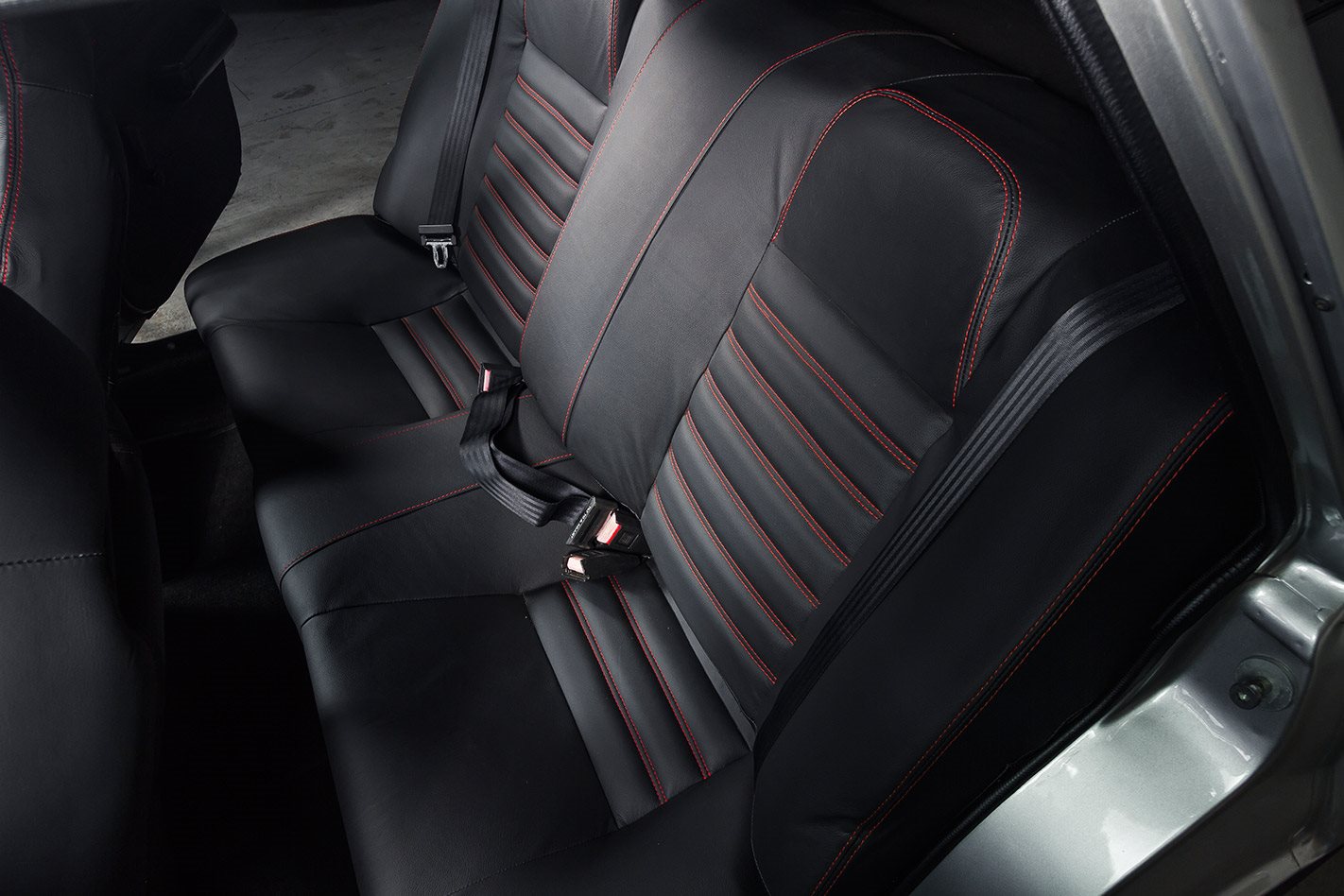 “Having built this car myself, it feels great; especially the feedback I get on it. The timeframe I built it in and the way it ended up coming out, it makes me very proud. 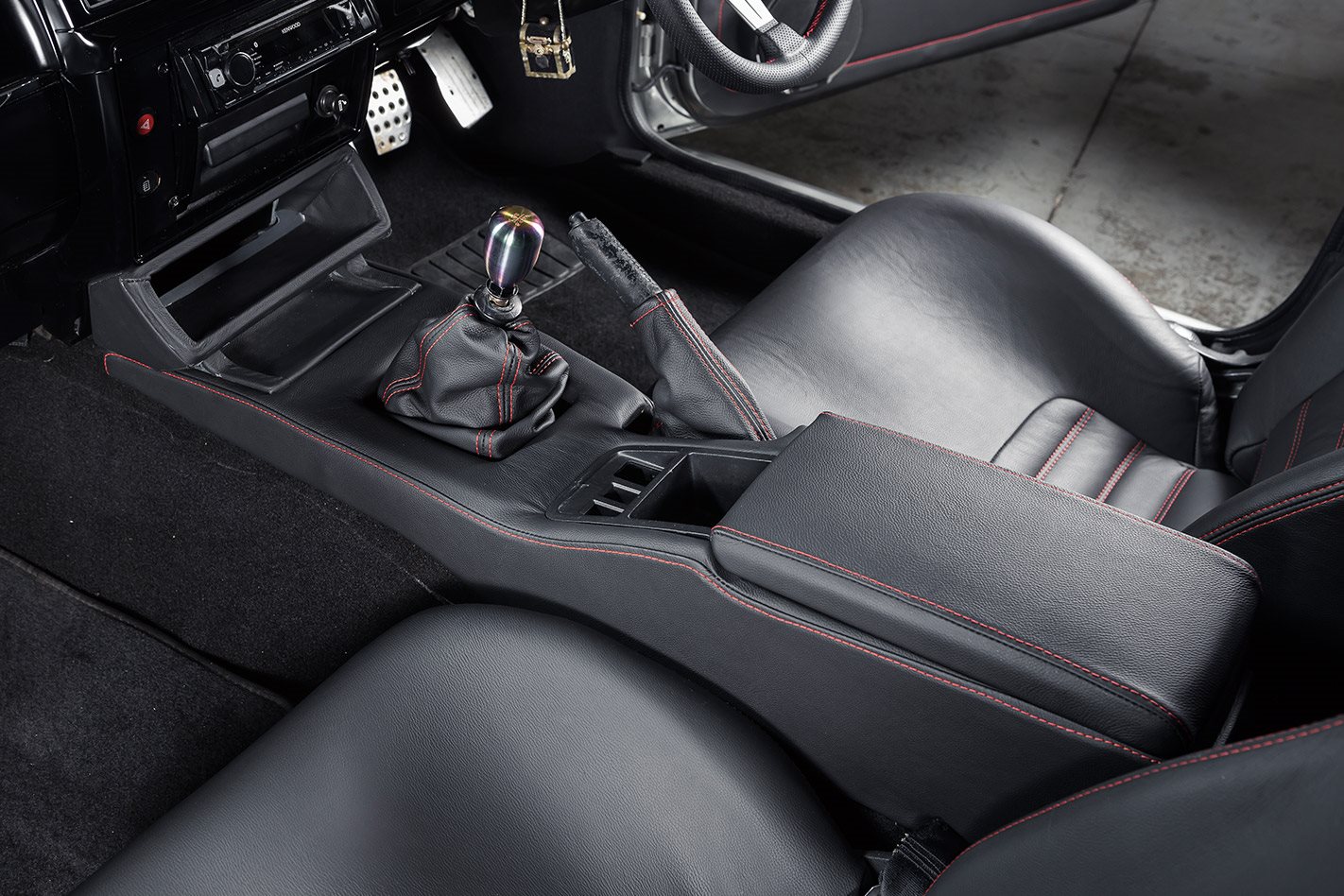 “I wanted the power to race anything at the Creek and be a competitor; I got sick of all the Skylines winning everything.”

Huss finishes by throwing down the gauntlet: “My brother’s got a GT-R and all our mates have GT-Rs; all of youse better watch out; VLR’s gonna get ya!” 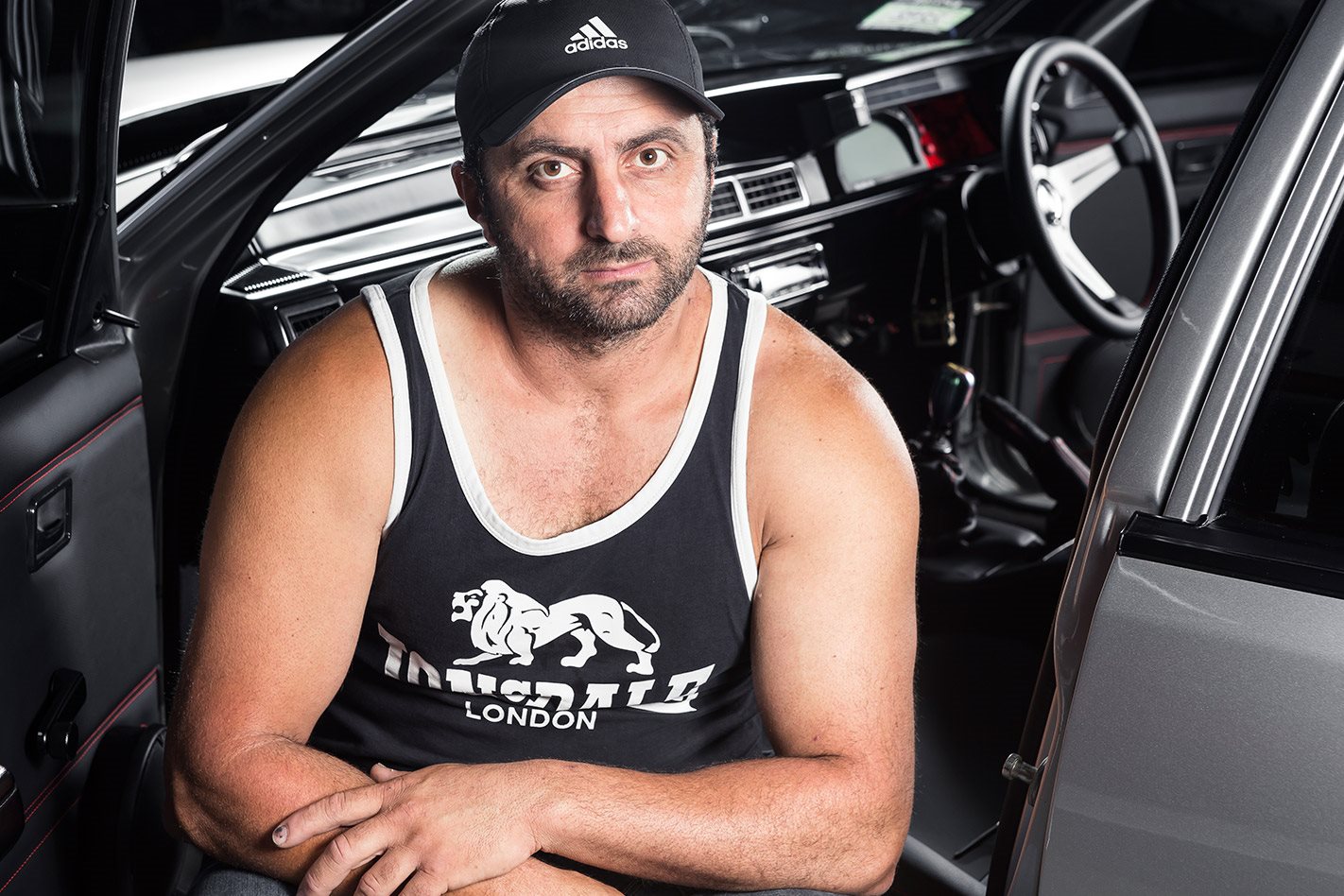